I had been on my own for 14 days, but now I was leaving Galway to drive to Westport and meet up with Forest and Nicola. I was beyond excited! 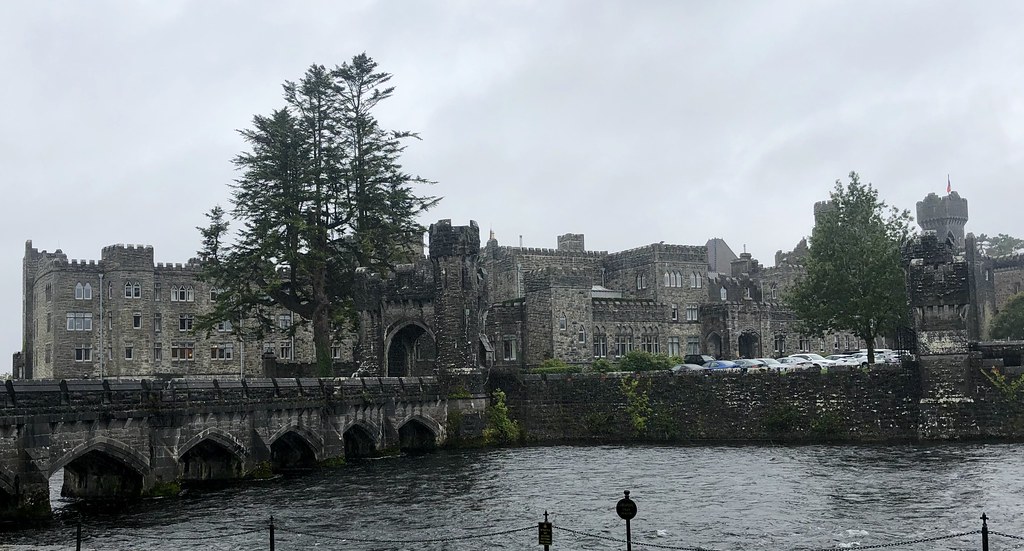 It was just a 1 ½ hour drive to Westport, and the girls' train wasn't arriving until late afternoon, so I decided to stop at the famous Ashford Castle on the way. It was raining pretty hard when I pulled up to the main gates and when I inquired about having lunch at the casual restaurant on the grounds I was told they were only open Friday and Saturday; it was Monday.

So thinking maybe the rain would let up I drove to the nearby town of Cong and had some excellent fish and chips at Pat Cohan's Bar aka The Quiet Man pub. The movie was filmed here and in other parts of the area so it's quite famous. 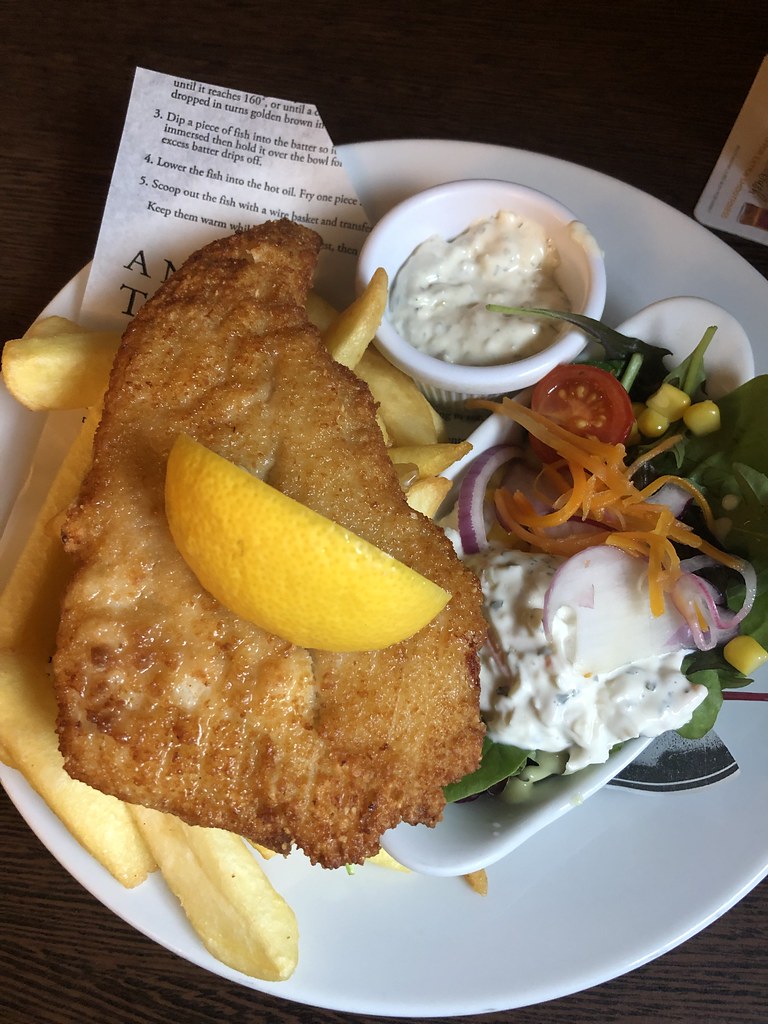 The rain hadn't let up but I still thought I would take a stroll around the Castle grounds and get some good photos. When I came back to Ashford's main gate the guard did not think me paying €15 to walk around in the pouring rain was such a great idea, so he kindly let me in without the fee. I parked in the cafe/gift shop parking area and walked to the pedestrian bridge. 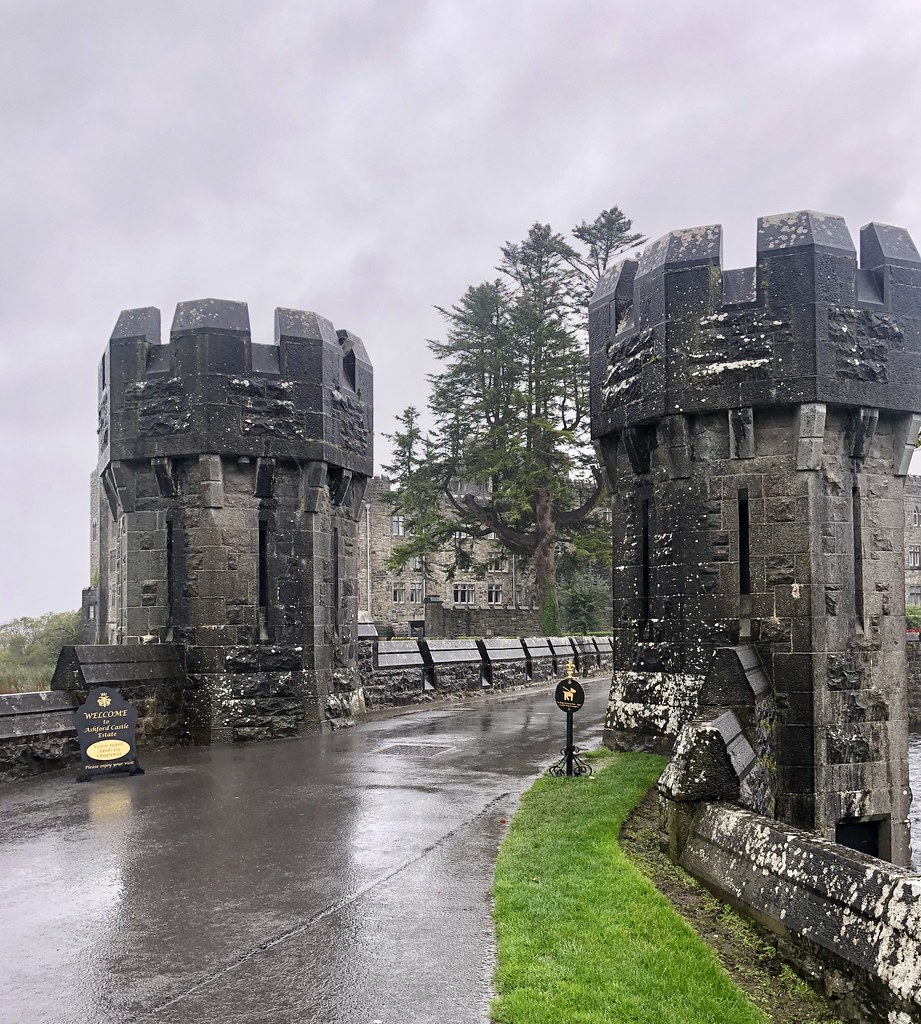 He was right, it was nice to get up semi-close to the castle but unless you are a registered guest you can't enter the building, and paying to walk to the other side of the bridge, where the view of the castle wasn't even as good, was a waste of money.
In Westport I checked into the very large Westport Woods Hotel. This sprawling hotel is like a conference center so there were a few tour groups. We had a large triple room and our breakfast was included in the price.

Having set up the girl's pillows with a few little treats, I went into town and had a pint at the very well known Matt Molloy's Pub. Matt Molloy plays flute in the famous Irish band The Chieftains and still is known to play in his pub. It's a bit of a pilgrimage and I was happy to sit in front of the fireplace and listen to some Irish men from Cork sing acapella in the afternoon, just so they could say they had. 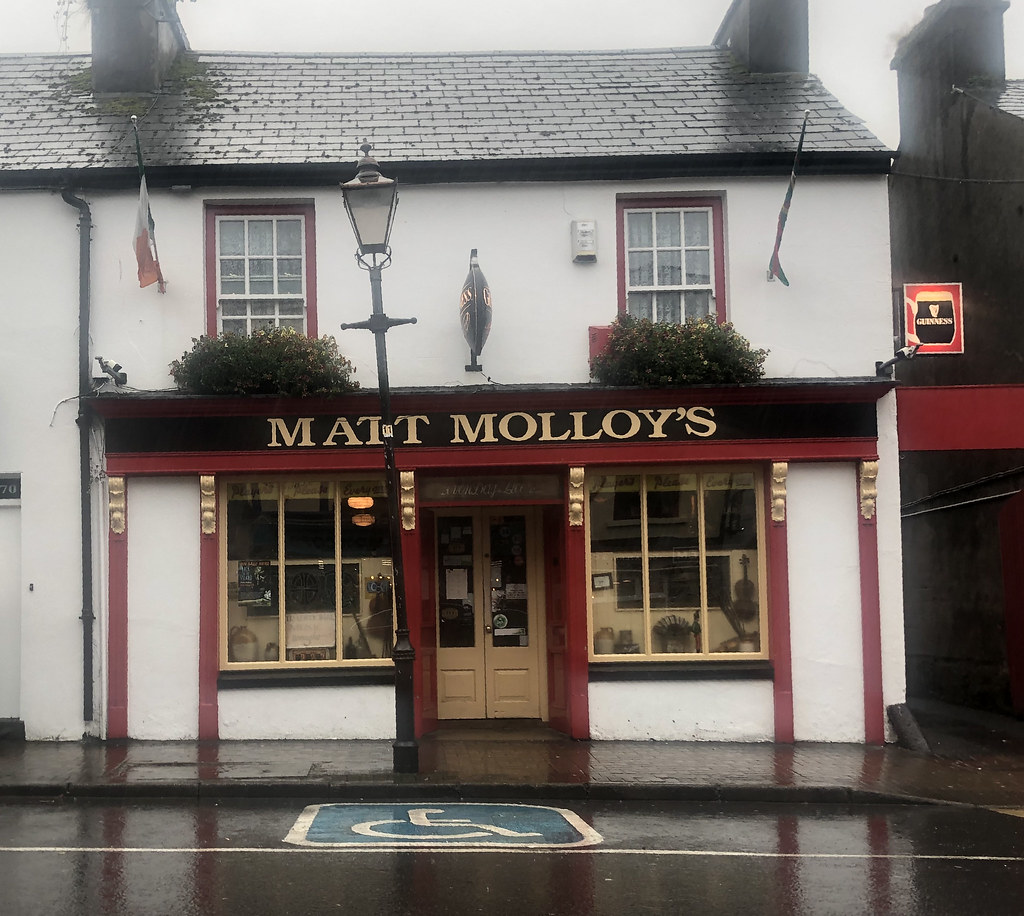 It was still pouring rain when the girl's train arrived so we decided to head back to the hotel and have a fun catch up at the bar there. So great to see them!

The next morning the weather was gorgeous so after breakfast we set out to meet a friend of Nic's at Croagh Patrick. We explored the park across the street while we waited for him, there is a very moving Famine Memorial sculpture of a ghost ship and also a small abandoned abby. 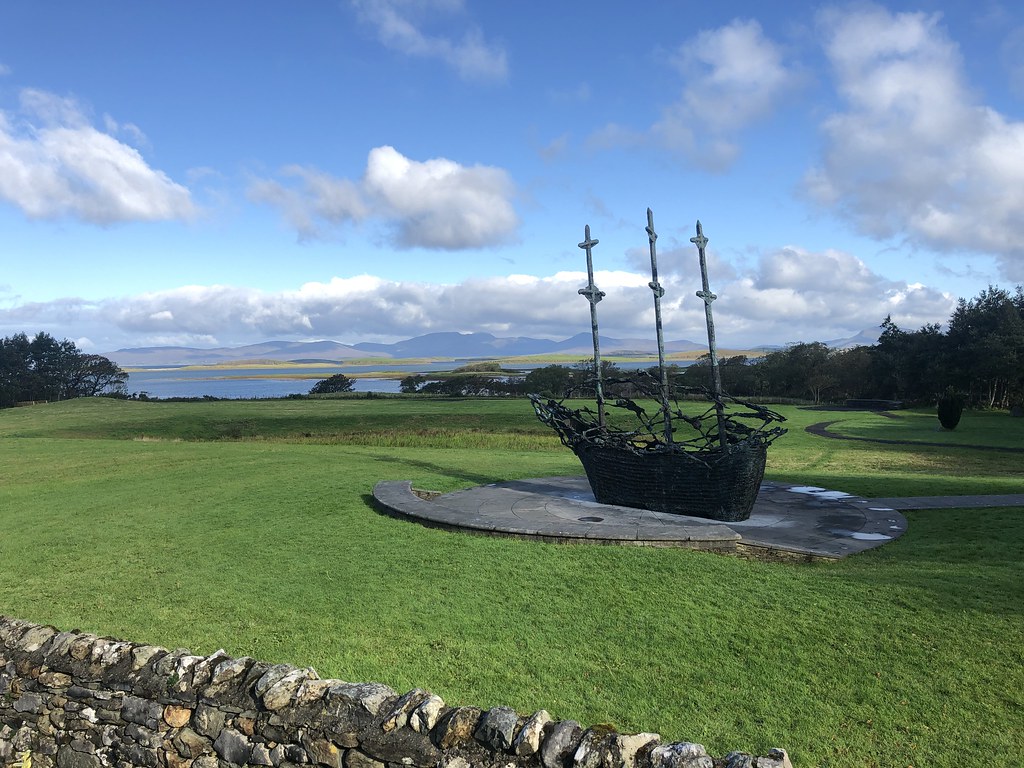 Back across the street we started up the holy mountain that is a famous pilgrimage for many. At 2500 feet elevation and about an 3 ½ hour climb none of us were interested in trying for the peak. But the views of the sea and the village of Murrisk from the trail were lovely. 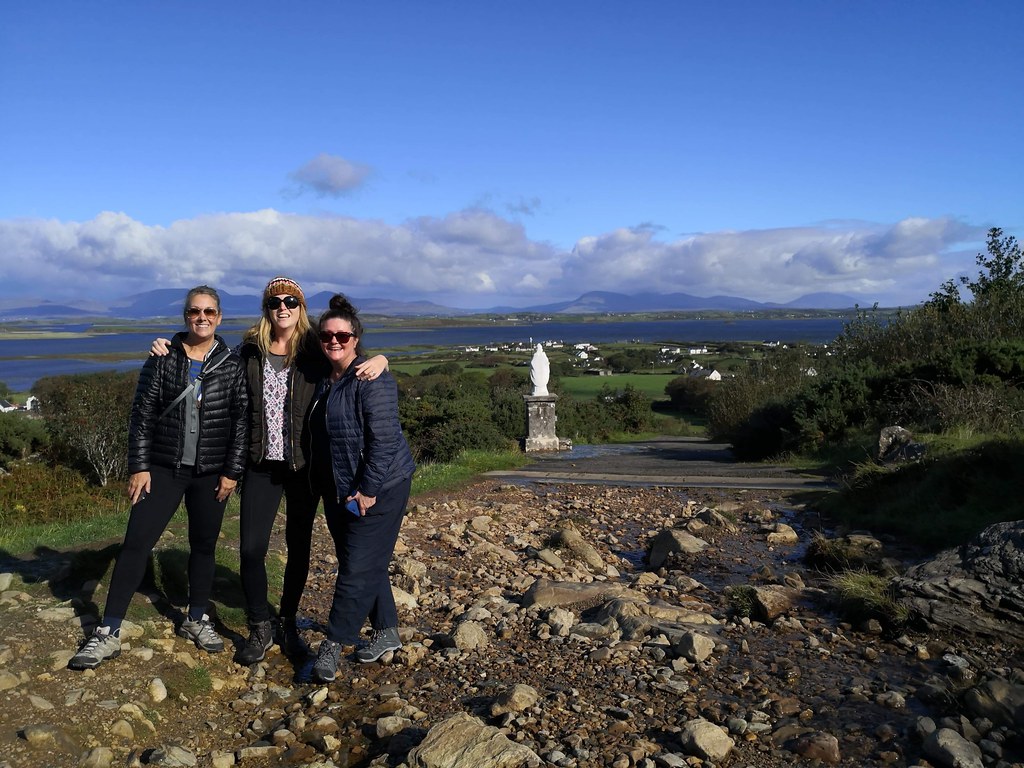 It is said that Saint Patrick fasted for forty days on the summit of the mountain in 441 AD. We went to lunch after at The Helm! This was a good casual spot for seafood right on the water.
We spent the rest of the afternoon wandering around Westport; it's a really cute town and very small. Super easy to walk around; it was the first planned town in Ireland! 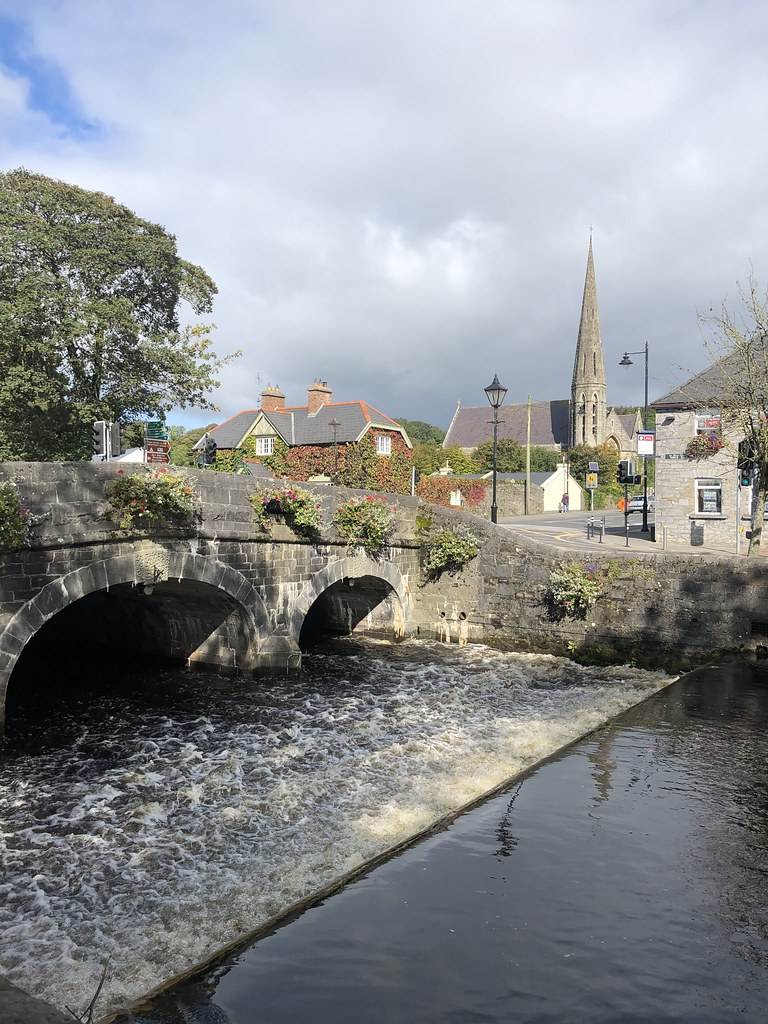 That evening we headed to Matt Molloy's, I was more than happy to hang out there again. There were lots of locals listening to the music, the bar actually has a large back venue so there were two bands going. And Nicola even sang along with the band to one song! It was a very fun evening!
We checked out of the hotel after breakfast the next morning and stopped at the small town of Castlebar for a short hike around the lake. There are excellent views of Croagh Patrick and some interesting art installations here. 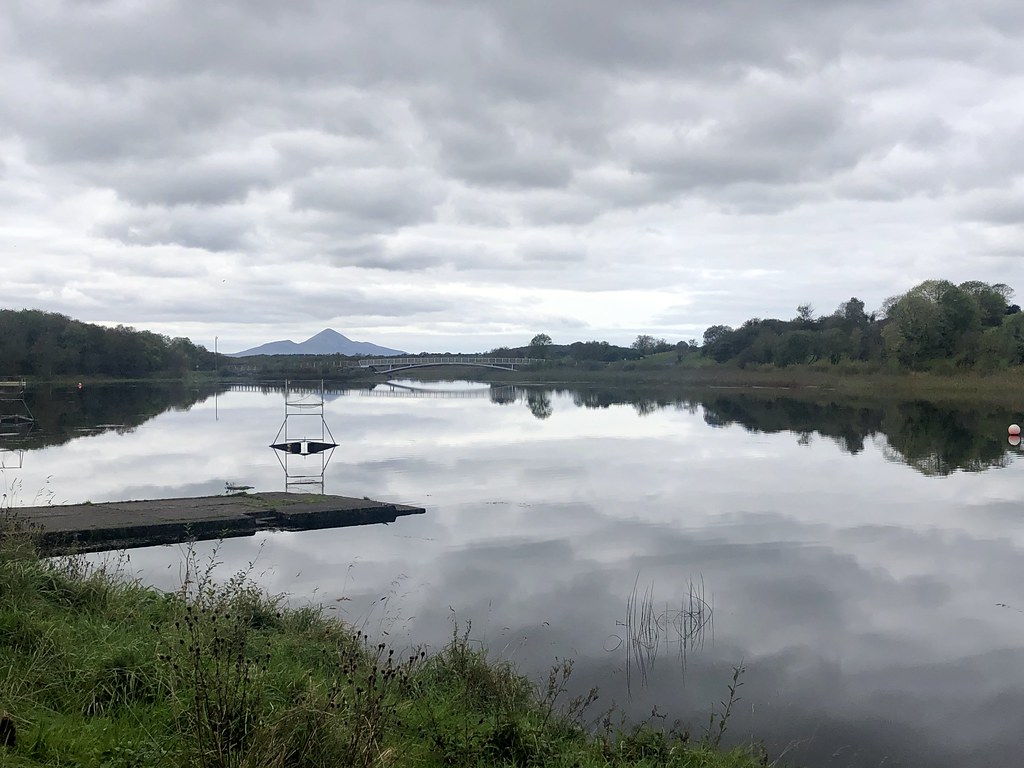 30-minutes later we arrived at Belleek Castle for lunch, which was excellent. Although we weren't able to do a tour of the castle (tours were at 10:30, noon, 2 & 4pm) we learned that it had been a private residence for many years, a hospital, abandoned, and finally a hotel. 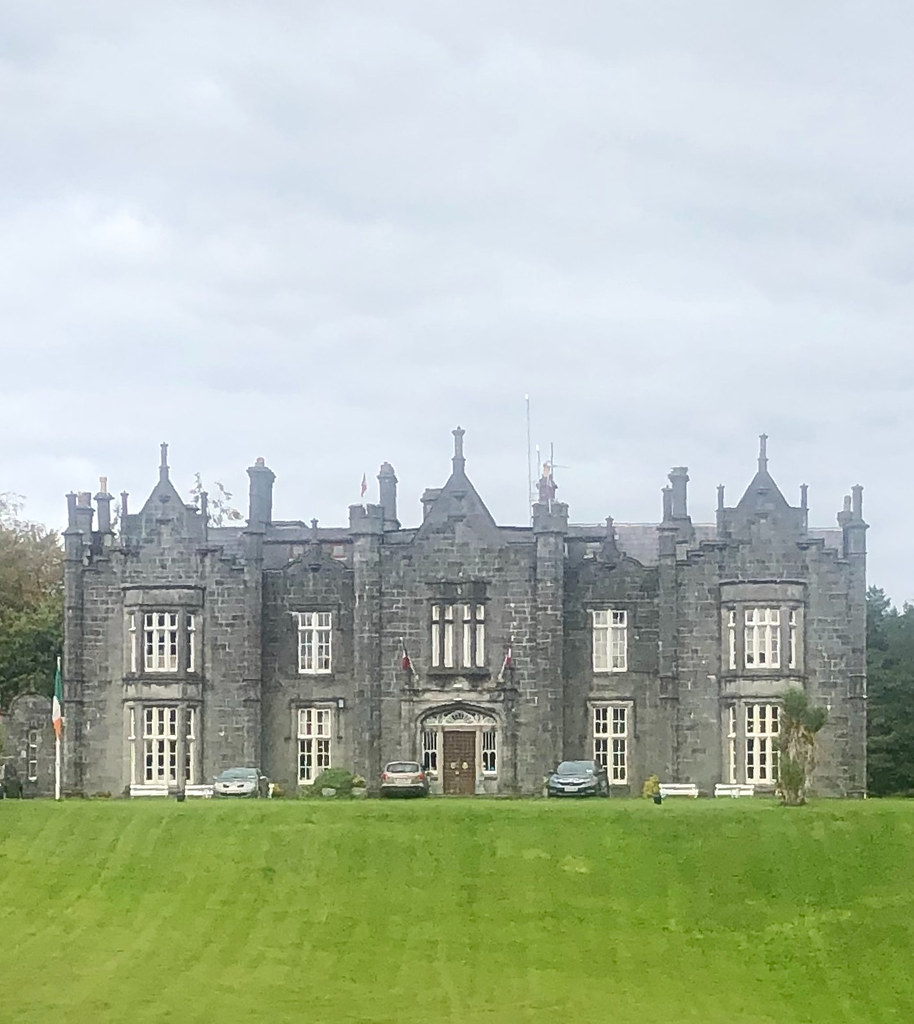 In the cafe I had a great quiche and salad. The grounds are beautiful and I just wish we would have had time to take a nice walk through their woods. But we had to get back in the car as we were heading farther north to Sligo!
**As I visited all of these places before the COVID-19 pandemic, please double check on opening hours. And fingers crossed these businesses all stay in business!**
All photos of County Mayo here.