And finally by sea... 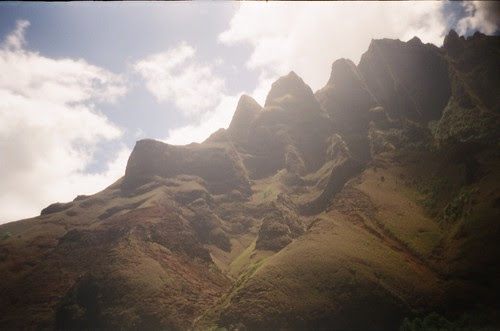 On our last full day in Kauai we decided to take a 6 1/2 hour Zodiac tour of the Napali Coast to get a bit more up close and personal to the amazing rugged peaks and valleys. We toured with Capt. Andy's and for the most they were very good. The captain and crew were fun, informative and seemed to really want everyone to have a great time and see as much as possible.

We started out of Port Allen and immediately came upon a pod of Spinner Dolphins! They were so funny to watch, playing around our wake, jumping and racing each other. Then it was about a 30+ minute, somewhat wet and wild ride up to Polihale, which is the last place you can get to by vehicle. Many people camp on the beach here with these dramatic mountains just next to them. All the way up you could spot huge sea turtles bobbing around in the water!

We decided to head up to the north end of the coastline before stopping for lunch. The weather was sunny and warm which was good as the captain pointed our Zodiac directly out into the huge waves crashing on a reef. For about 20 minutes we rode HUGE waves, our small boat seemingly being tossed around but yet still somehow in control. Very fun and adrenaline inducing!

He then moved us closer in to the coast where we explored a few sea caves, pulling right into them. So amazing and beautiful! 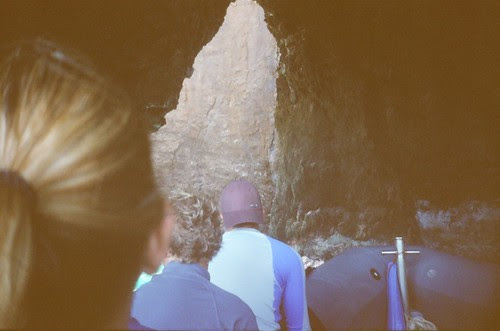 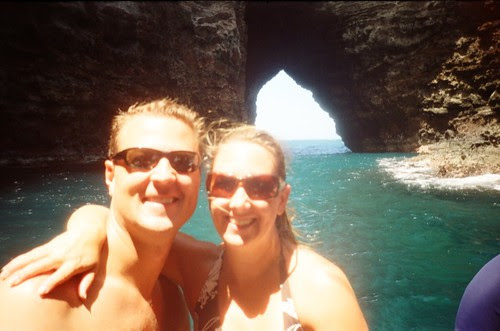 At this point we had a bit of a problem, the Zodiac has 2 engines and one of ours died. And it really needed both to get our boat of 10 all the way back to Port Allen which is now at least 1 hour away depending on the currents, waves, etc. 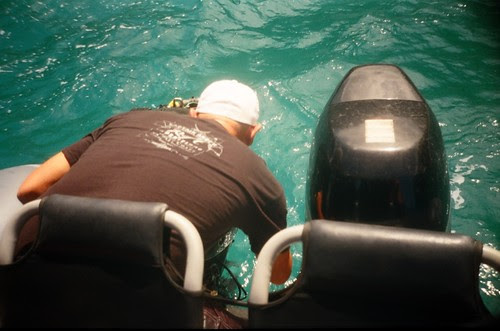 After multiple tries to get it cranking we went on one engine over to Nualolo Beach, accessible only by tour operators who qualify. It was a barren beach made up of rocks and a little open picnic area where the guys served us a really good hot lunch. We snorkled before, snorkeling was ok but nothing spectacular. For lunch there was a pineapple chicken dish, great rice, fruit, salad and dessert. After lunch we went on a walking tour of the ancient Hawaiian fishing village that use to be there.

The village was really interesting. Remains of burial grounds, houses and springs. All around the valley walls you could see the scars of old waterfalls. 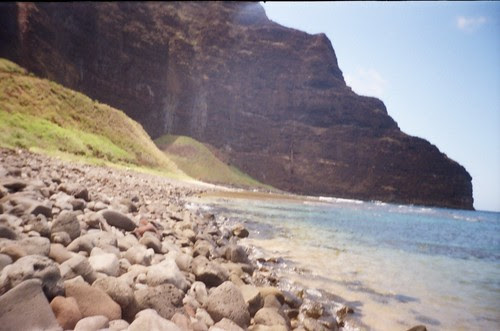 We even saw a monk seal lounging on the beach which is incredibly rare as they are on the endangered list. Our guide explained that they are so friendly the locals call them the dogs of the sea. They will just come right up to people and boats and unfortunately this made them easy prey for hunters.

Unfortunately during this whole time the captains were hard at work on our raft but couldn't fix it. They ended up taking a family of 6 off our raft and adding it to the now very crowded second raft, leaving just 4 of us on our handicapped vessel. We were really worried that it would take hours to get back but the captain did a great job and we were back in just under 2 hours. And we had a great time along the way still hitting some huge waves and getting tossed around as if we were riding a mechanical bull!

We were exhausted when we got back to the hotel, and salty and sweaty! A dip in the pool and a tropical cocktail were perfect. We stayed at the hotel that night and had an ok sushi dinner at a small place next door.

The last day we didn't leave until 10pm for our flight home so the Marriott was nice enough to give us keys to the Members Locker Room and we just stored our luggage and hung out at the pool all day. I was very sore from the raft expedition!

We had dinner that night at Roy's before heading to the airport and catching our red-eye home.

A fantastic trip and a great way to spend our 5th year anniversary. Kauai has definitaly become one of my favorite islands!

For the full set of our Kauai photos click here.

p.s. the photos in this segment were taken with our underwater camera which uses film and has a protective cover which gets foggy- that's why they look all dreamy and kind of old fashion. I like it!
at December 08, 2008 No comments:

Trip date: July & December 2020 A pandemic really puts a damper on travel; stating the obvious here. By July of last year I had already ...