In Malta's Grand Harbor, January 1, 2022 greeted us with spectacularly sunny skies. After a full day/new year's eve the day before we were all happy to relax on our vrbo yacht for the better part of the day. We cobbled together lunch from leftovers, sat out in the sunshine, and did some laundry at the marina facilities.

Later in the day we took a water ferry across to Valletta. There are a couple of different ways to get from the marina to Valletta; you can drive, you can take a large water taxi, or you can take one of the little traditional dghajsa boats that have been used as water taxis since the Phoenician times! 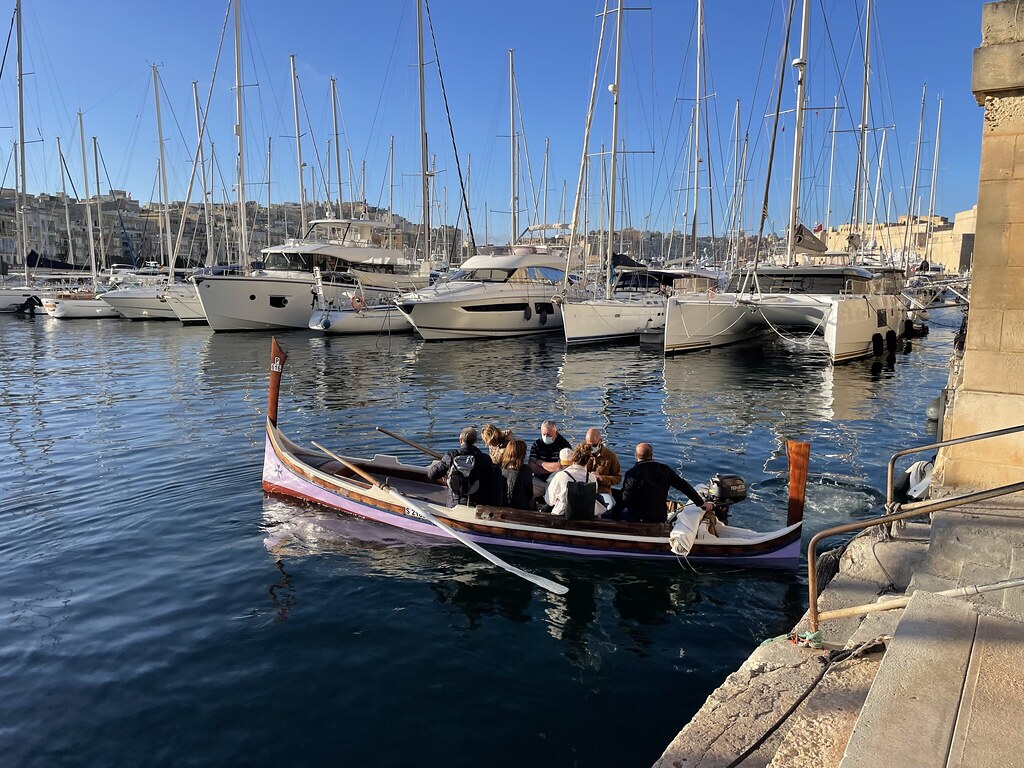 I was hesitant at first, as they seem a bit rickety, but it's hard to beat €2 per person and the pick-up was just down from our dock. In the end it was a great way to see more of the harbor and I liked supporting the local owners. 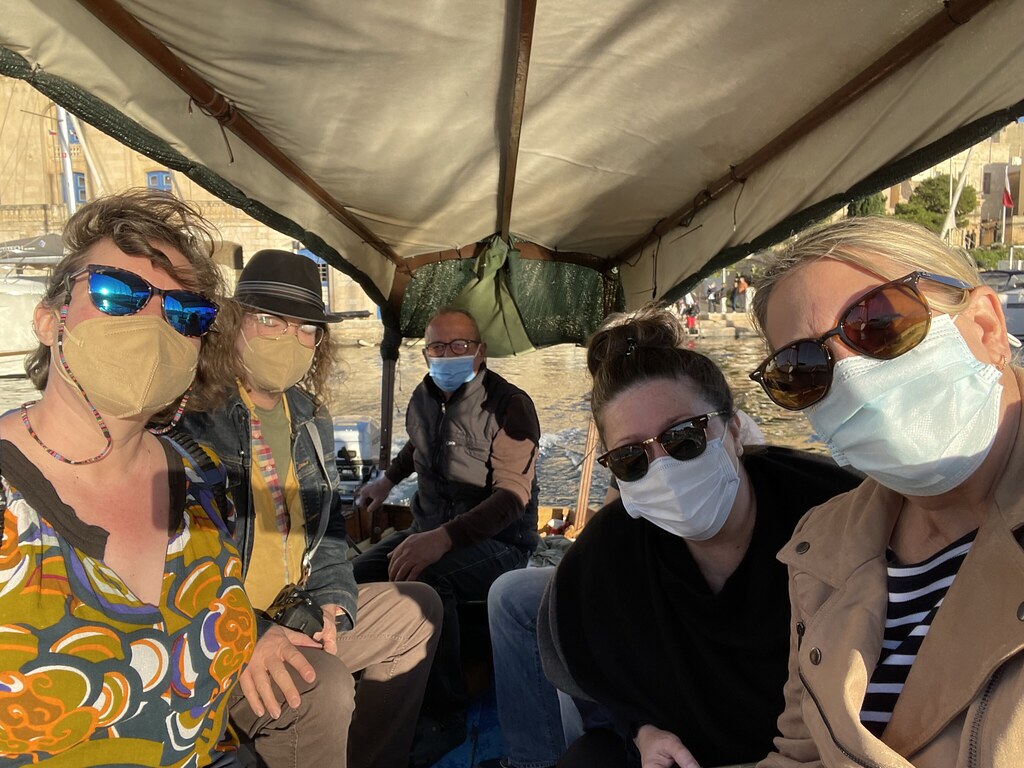 In the capital city we had a great time walking around. We started by heading up the Barrakka Lift which takes you 190 feet up the cliff to a stunning look out. They have been firing cannons at noon and at 4pm here for 500 years. Unfortunately they weren't fired when we there; maybe because it was a holiday? 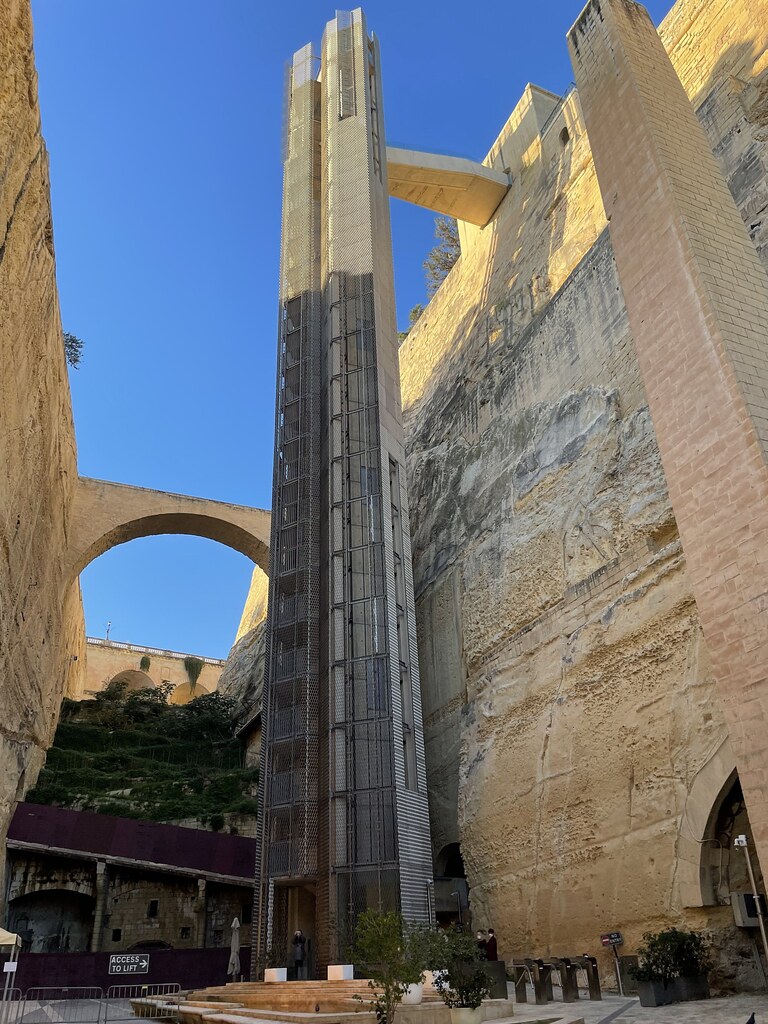 The 450+ year old city, built by the Knights of St John, is incredibly beautiful. And besides the Knights, the city has been ruled by the Phoenicians, Greeks, Carthaginians, Romans, Byzantines and Arabs. This comes through in the language, the architecture, and the dizzying array of monuments, 320 of them in the tiny capital! 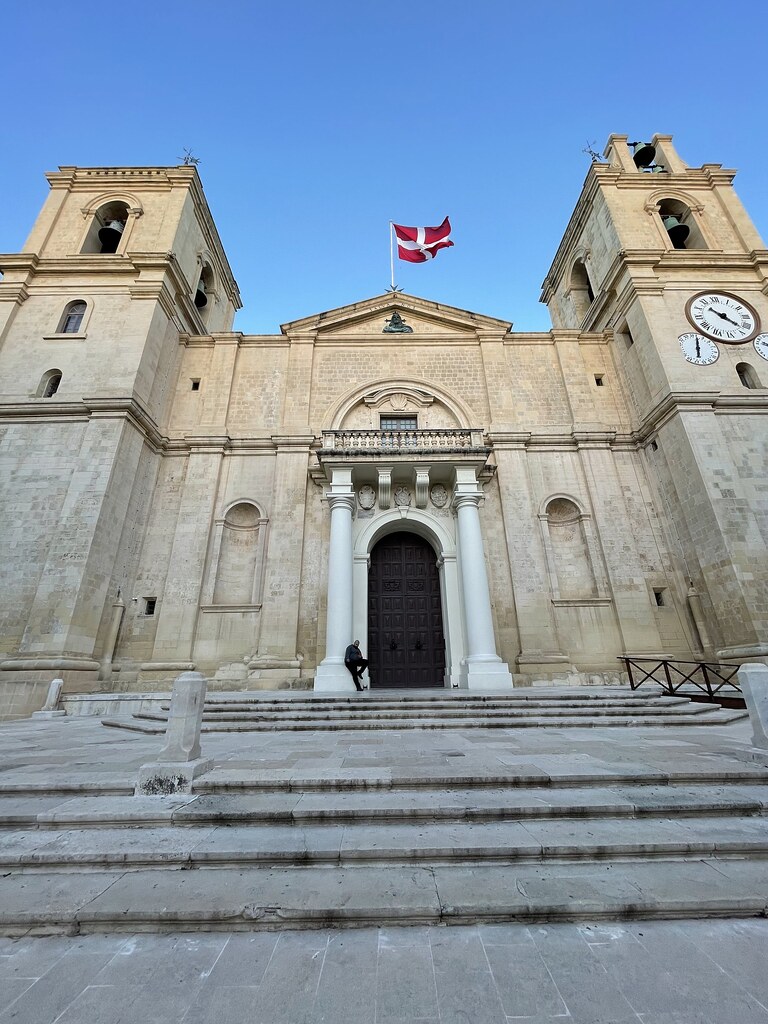 Even though most places were closed, as it was Jan 1st, just wandering the streets was really great. I mean, the entire city is a UNESCO World Heritage site! 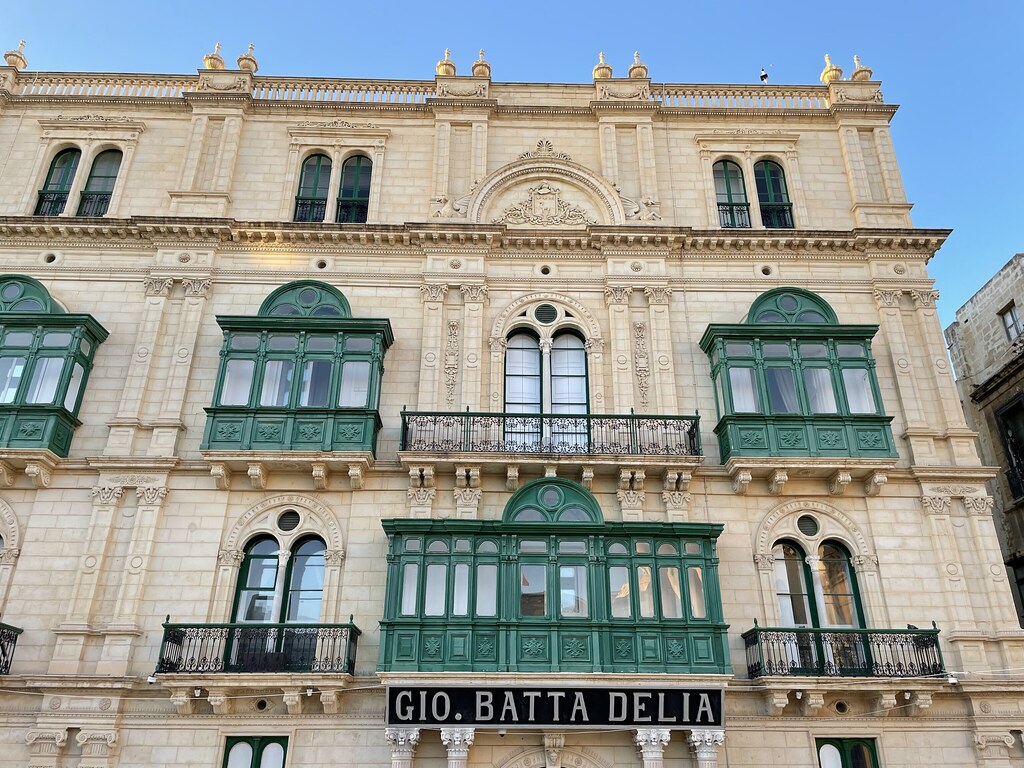 During our walk we passed by the Church of St. Paul's Shipwreck. Come to find out that in AD 60 St. Paul was shipwrecked on Malta and it was then that Christianity was brought to the island. The church was built in 1570 and has some really interesting artifacts including bones from the Saint's wrist and part of the column that he was beheaded on from Rome. 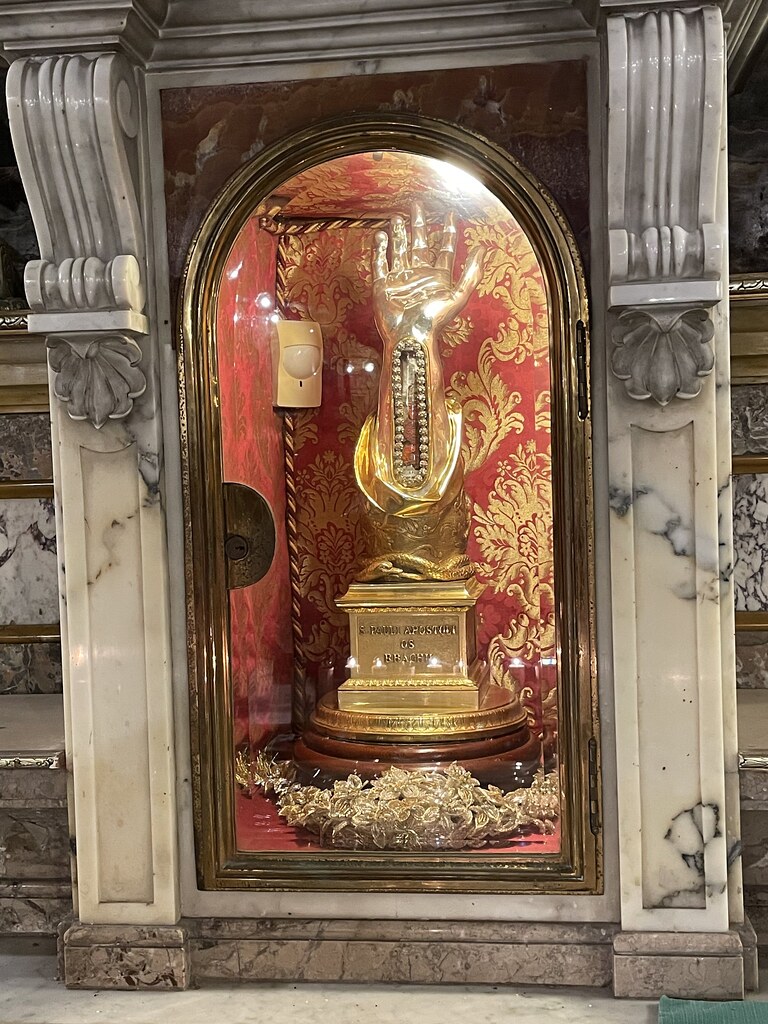 After a few hours of sightseeing we decided that it was time for cocktails and made our way to Strait Street.  Originally this was the place where sailors on shore leave would party, it then became more of a bohemian hang out and was referred as "The Gut". Now, this 5-block long street, and at times not much more than an ally, is the location for bars.We chose the Kennedy Bar and had really great drinks, service and some average bar snacks. 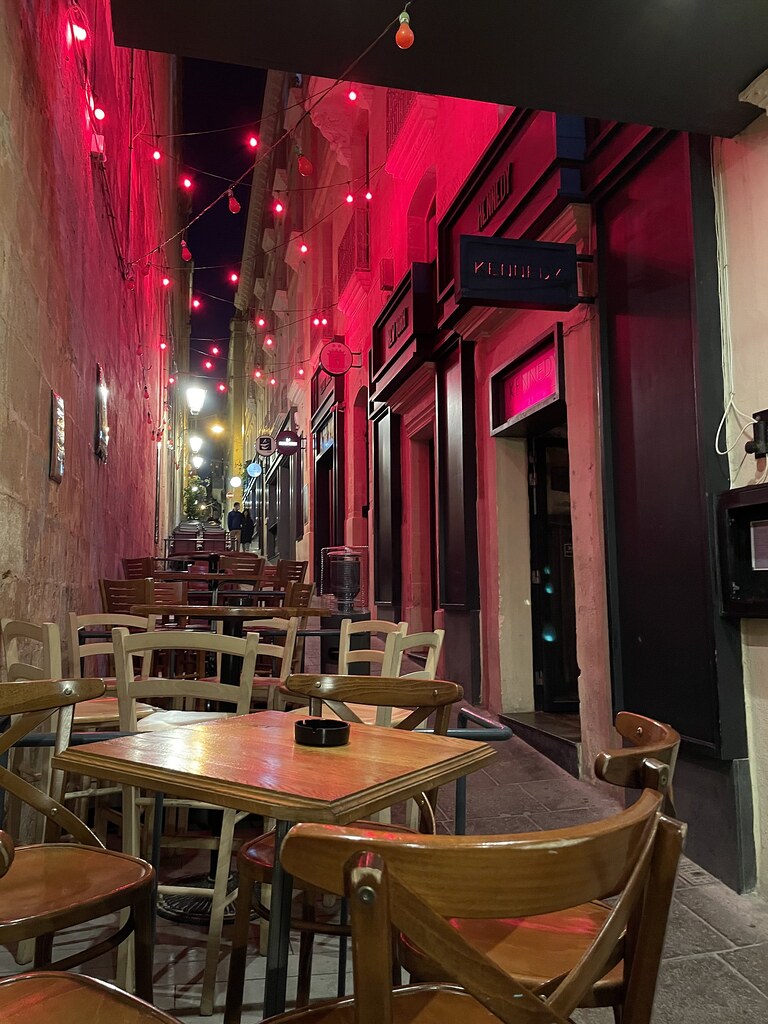 Afterwards we walked to the south end of Strait Street and had some lovely G&T's alongside delicious pintxos at Yard 32. They have an amazing collection of gins here! Unfortunately they only had outside seating available at the time and it was getting pretty chilly so we only stayed for one round. But I'd go back to both of these cocktail spots!
The next morning was sunny and soooo warm! I headed out solo to explore the area of Birgu which is where our marina was and also where the Fort Saint Angelo is located. It was a nice stroll pass many super yachts on the way to the fort. 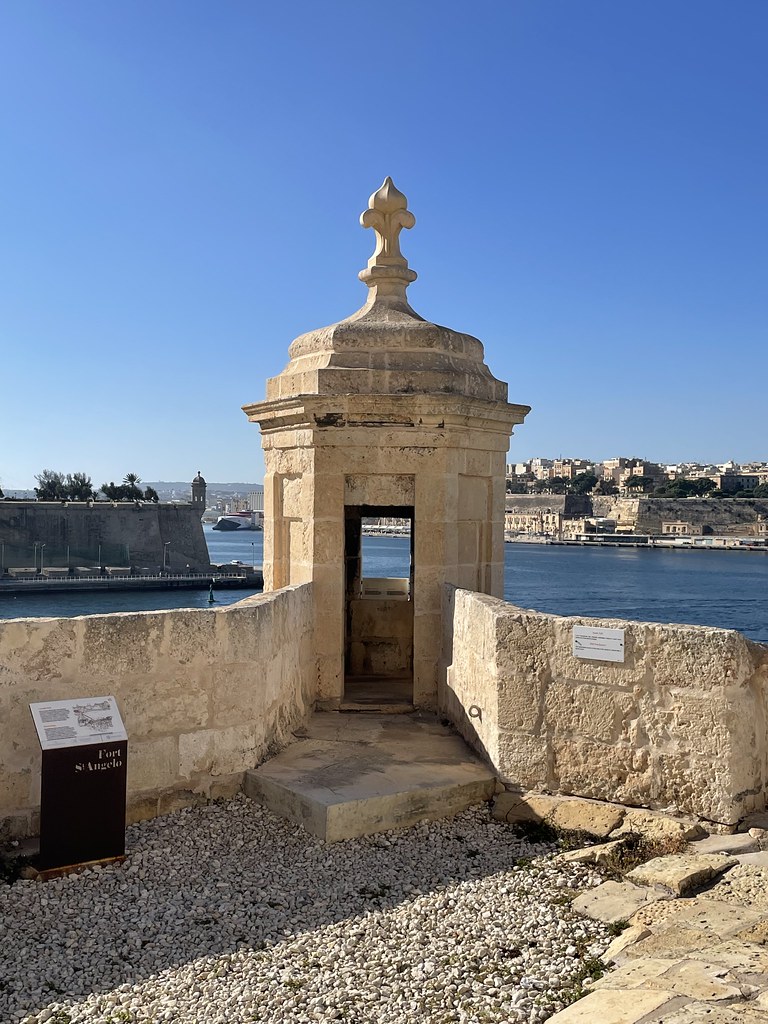 The fort was the Order of St John's headquarters during the Great Siege of Malta of 1565, but the location has had buildings on it since medieval times. It's an interesting walk around to see the old cannons and to take in the gorgeous views. The upper level is by far the prettiest with the palace and a little chapel. 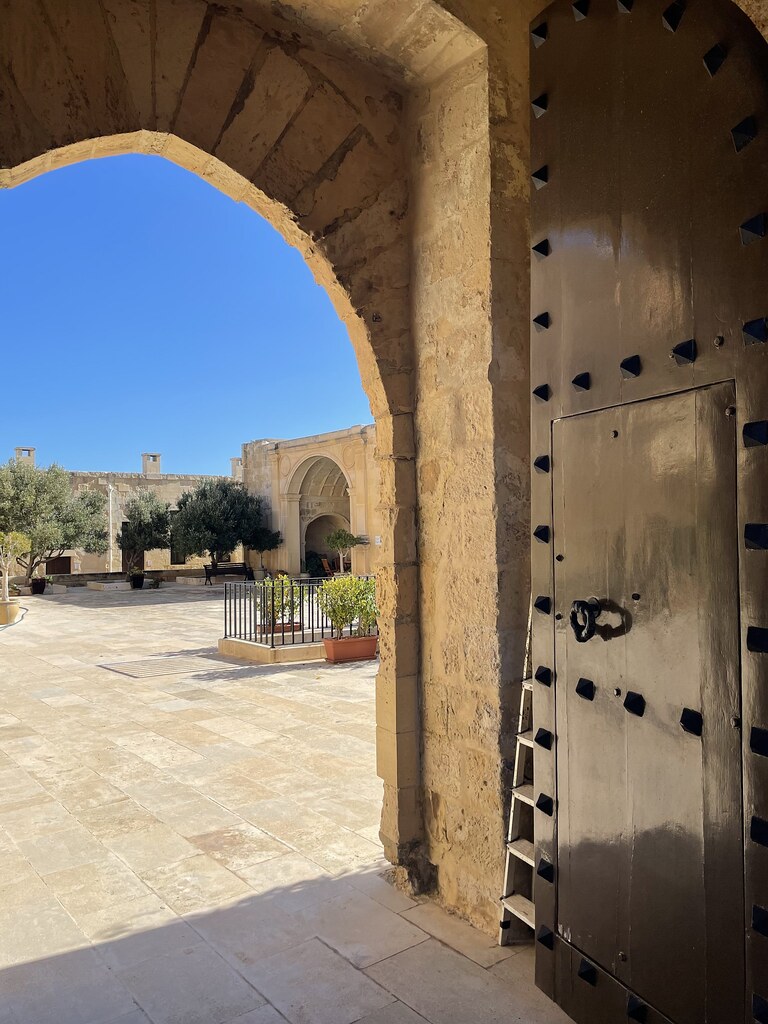 I continued to explore Birgu by walking up a VERY steep set of stairs to the main square area. Birgu is absolutely charming so even if you aren't staying in the area, I'd highly suggest spending an afternoon here! 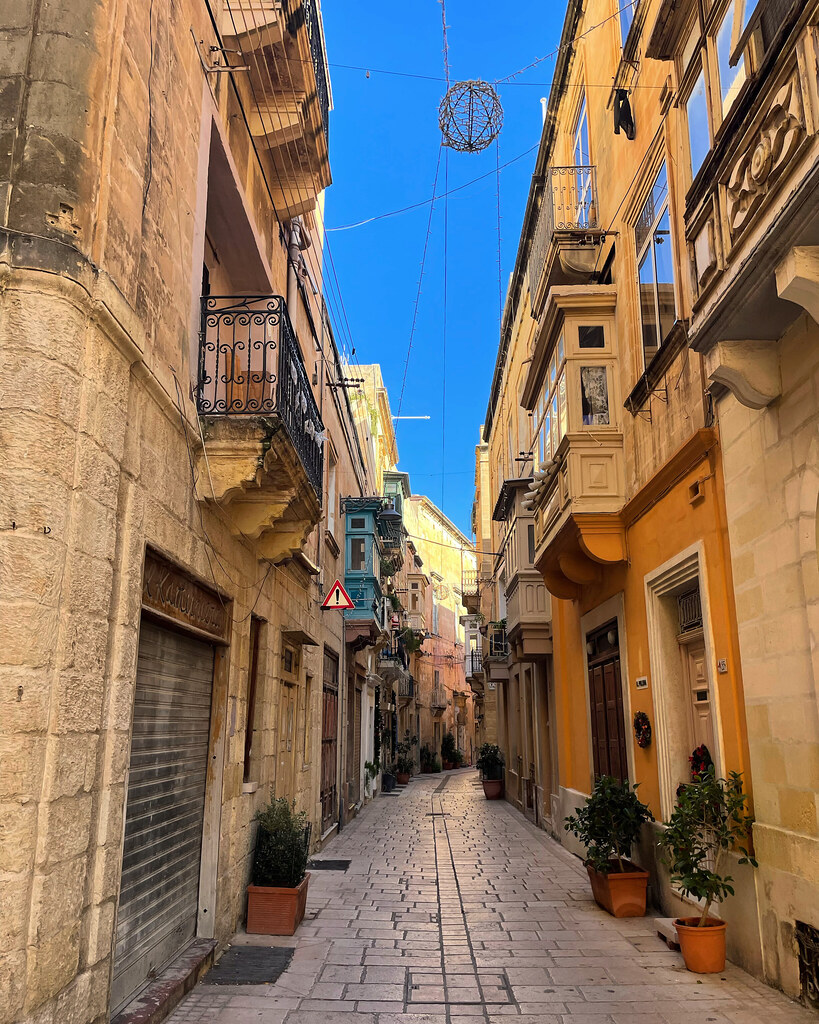 I was starving after all my walking around so I stopped for a quick bite of ftira, a traditional circular Maltese sourdough bread, which is used in sandwiches like a baguette. Then I met everyone for a proper lunch at the terrace of one of the restaurants right at the marina. 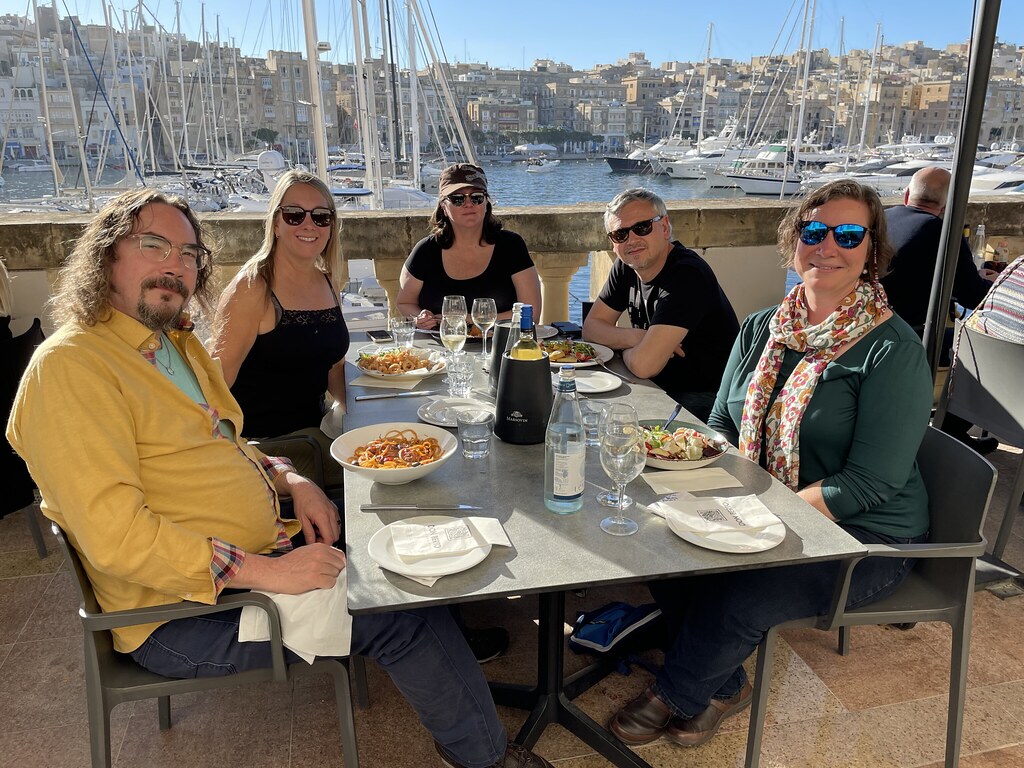 It was our last night on the boat and we all wanted to enjoy every bit of it! We started happy hour a tad early and finished off the champagne while enjoying the gorgeous sunset. We had gotten incredibly lucky with the weather in Malta! 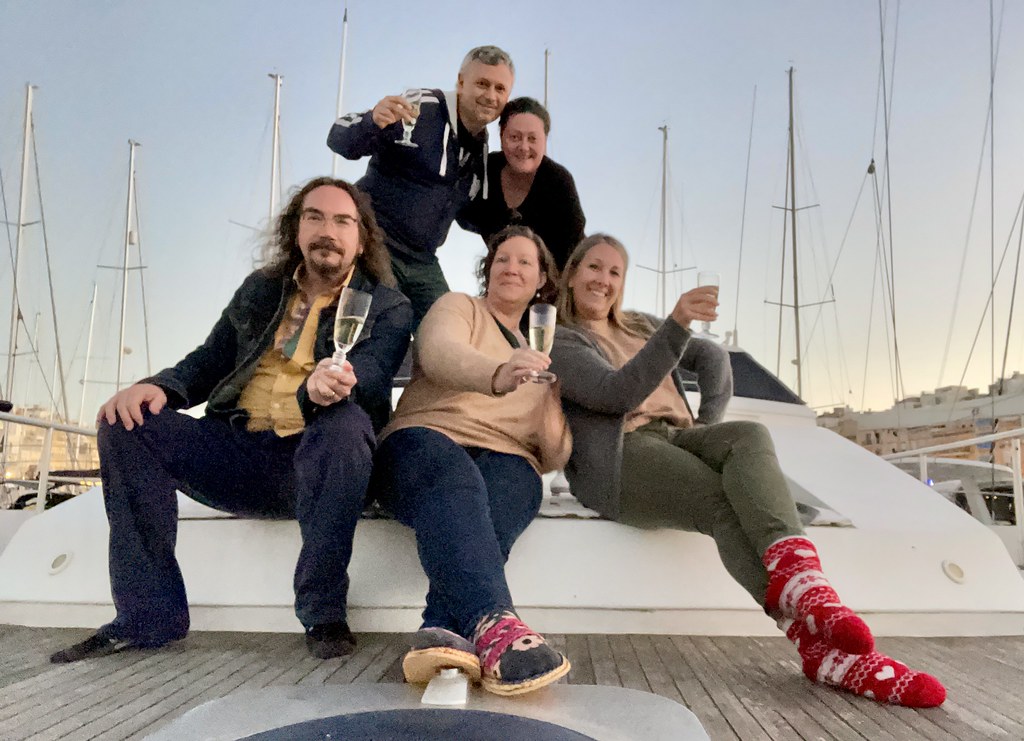 That night we had a very good dinner at d' Centre, outside in their very cute courtyard. Bonus that it was just a short walk from our boat.
Forest and I got up early the next morning, grabbed a dghajsa water taxi, and made our way to St John's Co-Cathedral in Valletta as we hadn't had time to visit when we were there before. Built in 1572, this was the church that the Knights held communal worship in. As soon as we entered I was floored by the opulence! 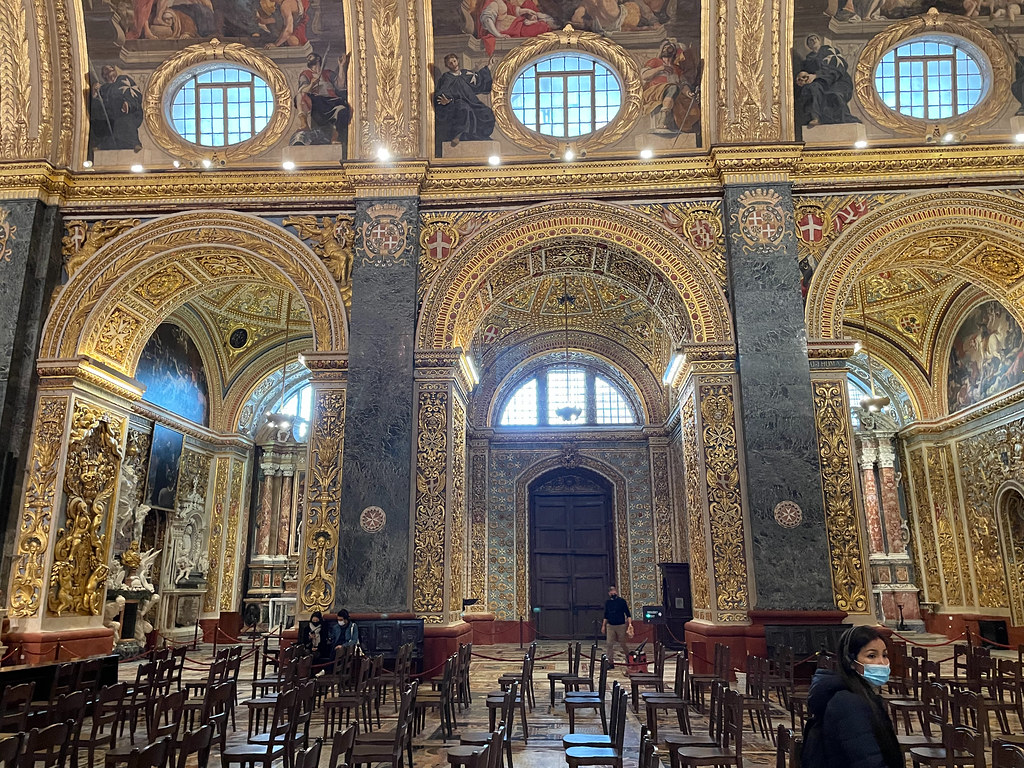 We picked up an audio guide and went through the 8 chapels, one for each branch of the Order of the Knights. The floor is laid with hundreds of marble tombstones, they cover the entire floor of the cathedral and each is a commemoration of a Knight of the Order. 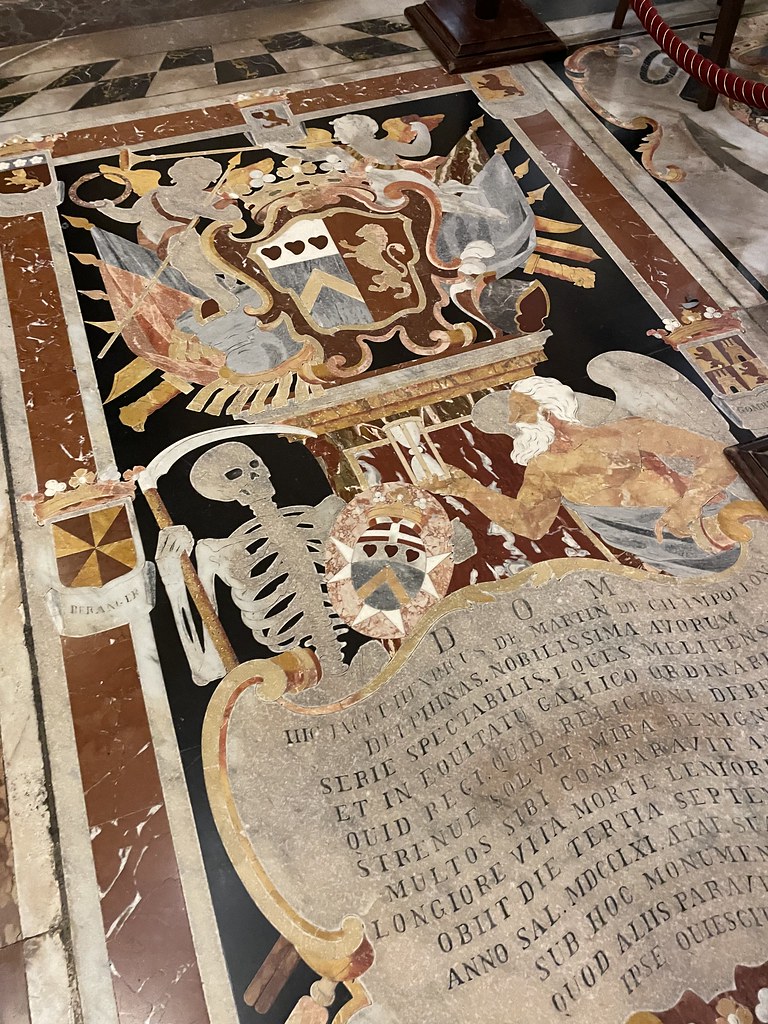 Every square inch of the cathedral is decorated, gilded, carved, painted, sculpted, etc. It's an amazing sight! 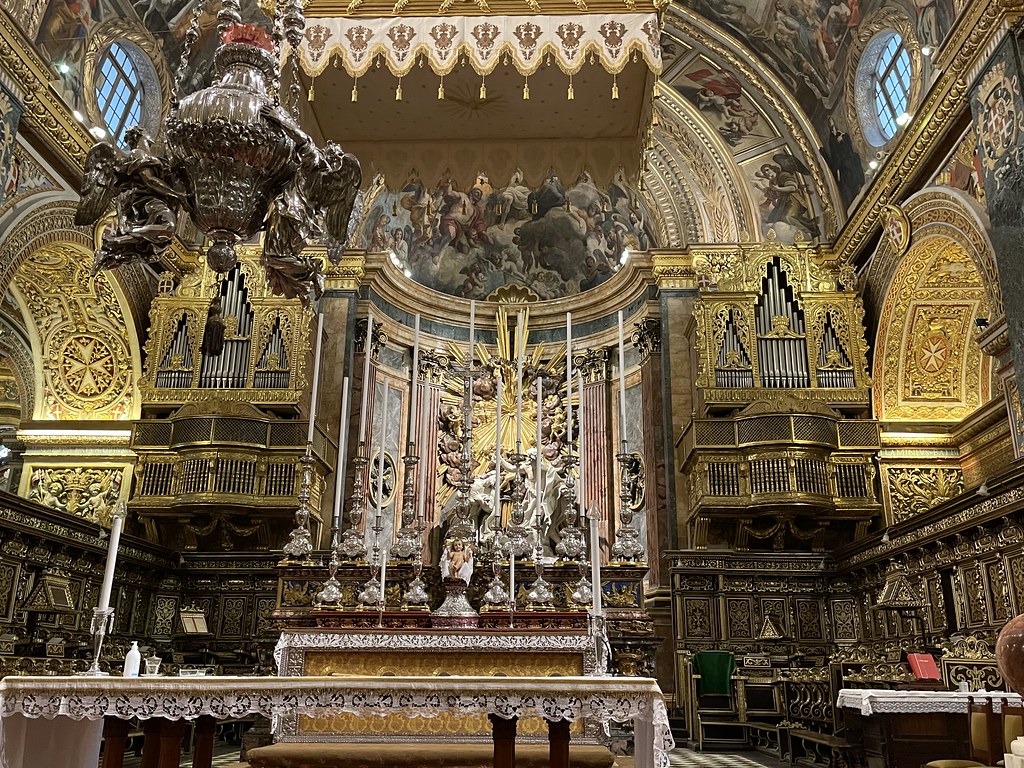 Before we left we made sure to go to the Oratory and check out Caravaggio's "The Beheading of St. John". WOW.
I was so glad we made the effort to go thru St John’s Co-Cathedral, I would absolutely suggest this is a do-not-miss while in Malta.
We got back to the boat in time to say goodby to Brian and Anne and then Thibault and I went and picked up one last order of pastizzi for lunch. 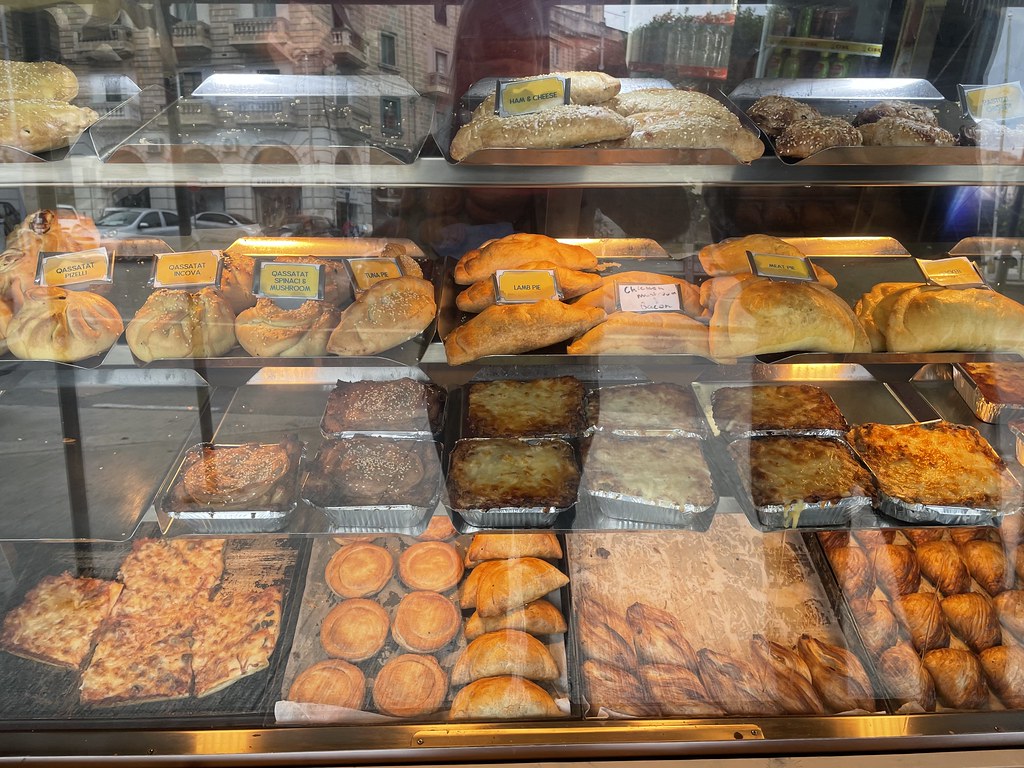 The next 24 hours were all travel. We had a 3 hour flight from Malta to Orly airport in Paris where I said goodbye to Forest and Thibault. My flight to Seattle wasn't until the morning and it was out of CDG. The US was still requiring a negative Covid test to enter so I took a Uber to the Moxy at CDG (for €100!). I had used some Marriott points for the room and had brought my own proctor assisted Covid test. It was a relief when it was negative and I knew I could return home the next day.
My flight home was suppose to have been on British Air but they had to cancel and reschedule me because their crew had Covid! I flew Business Class on American to DFW which was quite a bit nicer that the BA flight I took to Paris originally. My seat 5A was its own pod with lots of storage and very comfortable lie-flat bed. Good thing as it was 10 hours to DFW. My connecting flight was delayed 3 hours which made for a long day! I had First Class on the flight to Seattle but couldn't tell you how it was as I was asleep as soon as I sat down. Unfortunately my suitcase didn't join me back home for 2 days! That's travel for you! 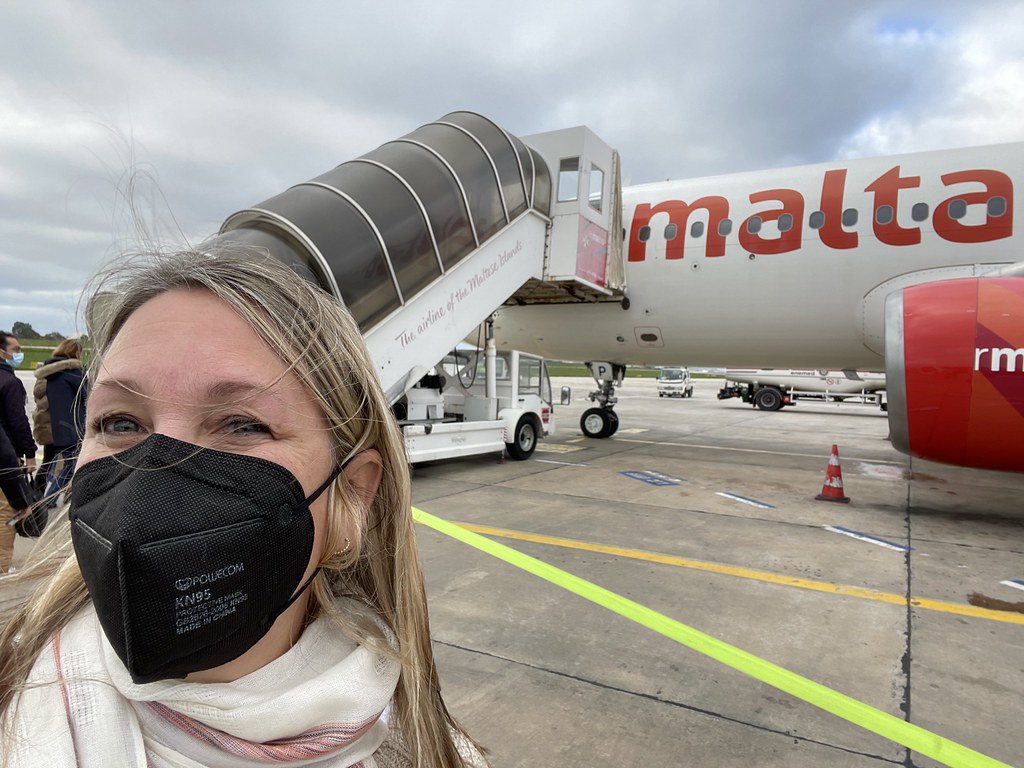 Not only was it fantastic to restart our annual New Year's Eve trip, and have new people join us, but Malta is an amazing destination. If you've considered it at all, I'd throw it to the top of your list! And if it hasn't been on your radar, I hope it is now!

All photos from Malta here: