A Walk Through Chinatown

Back in February some girlfriends and I went down to San Francisco for a few days of fun. One had never been (Kate's in Geneva) and the other hadn't been in over 10 years (Forest's in Paris). We did the usual trolley rides, bar hopping and of course dining around which I love to do whenever I'm in the city. 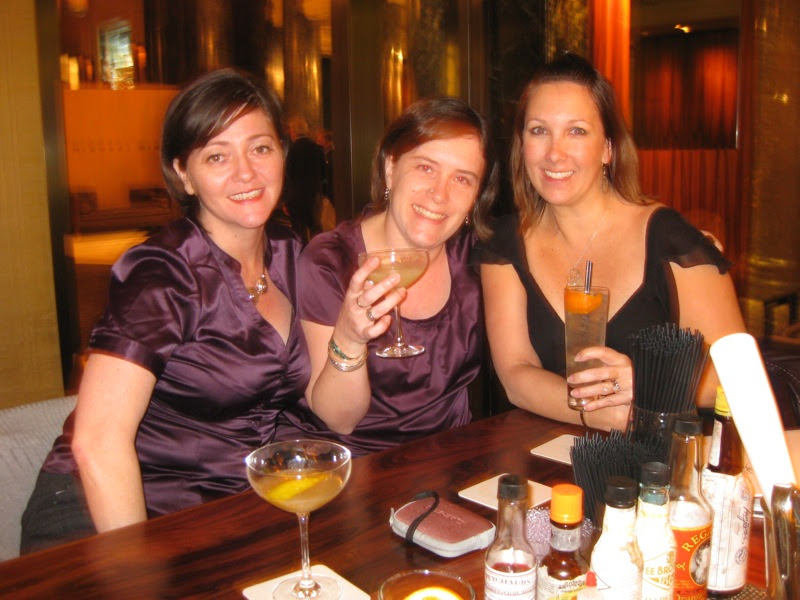 drinks at Clock Bar
One day we decided to go on a self guided walking tour of Chinatown, something I had not done before. It's such a fascinating area, feeling very foreign in places yet also screaming "tourist trap" in others. This is the oldest Chinatown in the states and the largest outside of Asia. Armed with our printed map we let Kate lead the way!

We started at the Dragon's Gate and poked into the funny souvenir shops which line Grant Ave. Resisting the urge to buy umbrellas, statues, pot holders and the like we continued on in search of a snack. Past the ornate dragon streetlamps and under the strings of lights and flags crisscrossing overhead we found our place. Where better than Eastern Bakery where none other than President Clinton also stopped in for a bite as this picture clearly states! 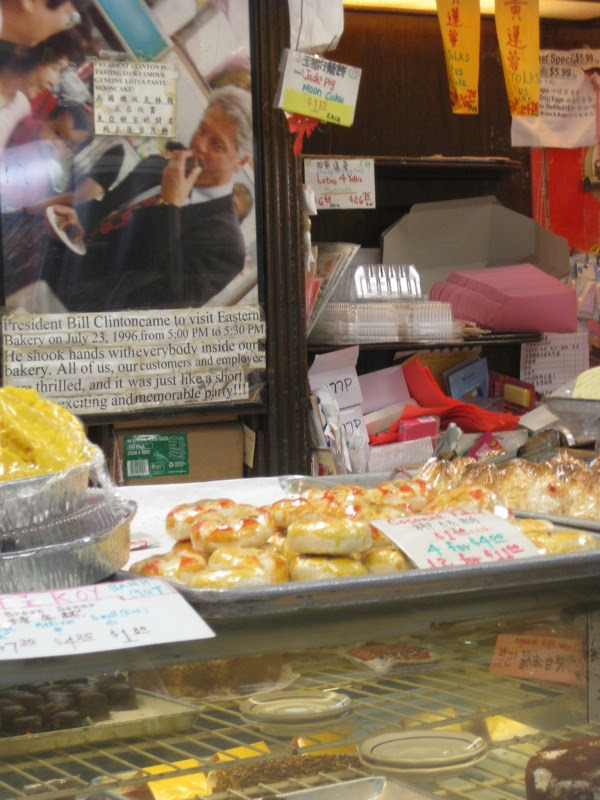 "President Bill Clinton came to visit Eastern Bakery on July 23, 1996 from 5:00pm to 5:30pm. He shook hands with everybody inside our bakery. All of us, our customers and employees were thrilled and it was just like a short but exciting and memorable party!!!!" Hey if it's good enough for Bill, it's good enough for 3 ladies on a little walk!

Bao in hand we continued on to Waverly Place, gazing up at the interesting multi-floored temples and all their flags and pennants. Also called "the street of painted balconies" it is here where you'll find the oldest Chinese temple in the USA, Tin How.

Continuing on to Spofford Alley, once home to opium dens, brothels, turf wars and secret society halls. Now it seems tame and ordinary, cluttered with beauty salons and florists. We found number 36 where reportedly Sun Yat met and helped the Ghee Kung Tong (the Chinese Freemasons) plot and overthrow China's last dynasty, the Manchus. Established in 1849 this 100,000+ member clandestine organization has quite a history! 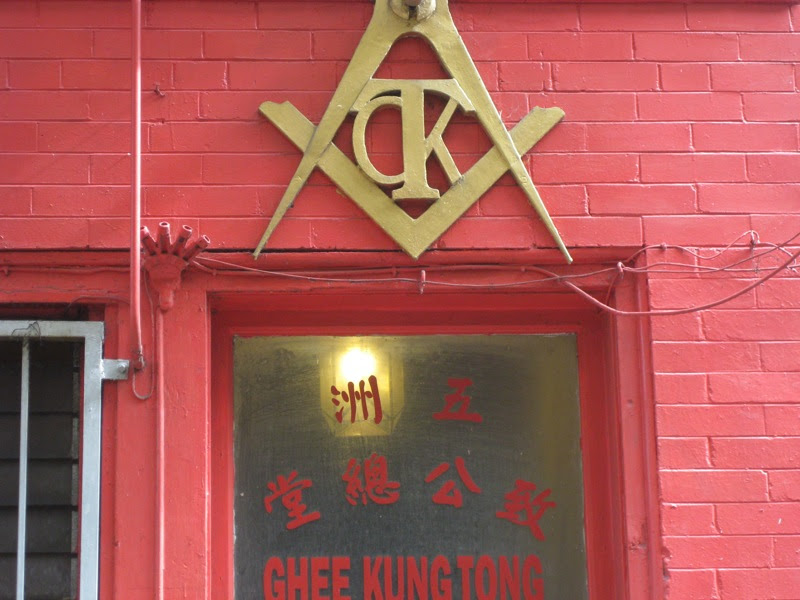 A stone's throw away and we turned down Ross Alley. Kate thought this was cool as her last name is Ross. I thought this was cool as we were headed into the Golden Gate Fortune Cookie Company. Here 2 women sit and hand fold fortune cookies as it's been done since 1962. The machines cook the wafers on what look like mini griddles and then quickly a fortune is inserted and the cookie is folded before cooling and hardening. A gentleman keeps the people moving in and out quickly as the shop is very tiny. You can have samples of the flat or broken cookies or purchase bags of the finished products. And if you take a picture, like mine below, it'll cost you 50¢. You're welcome. 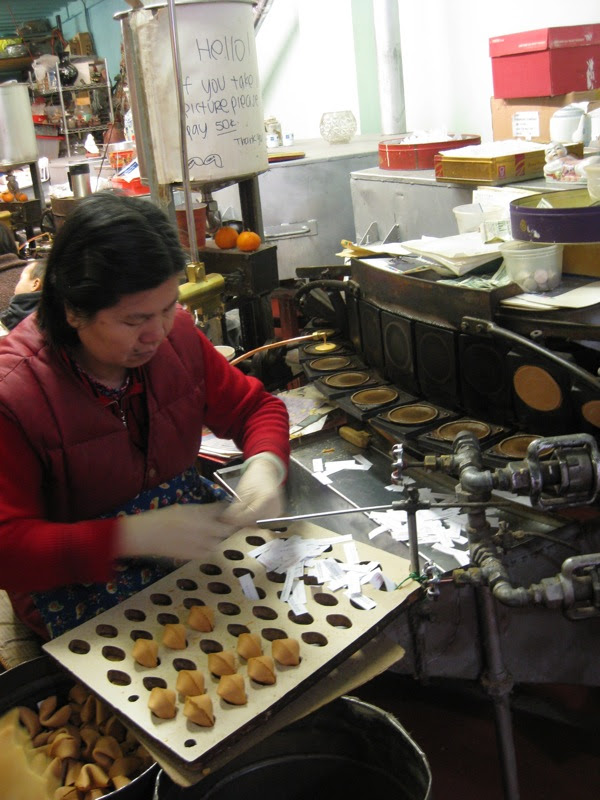 We wandered back down to Grant Street and browsed many dried herb and other "healing" products in the shops. Passed by more souvenir shops and buildings with the classic Chinese architecture.  Saw 2 crazy looking cocktail bars that I now hear to be quite the "regulars" watering holes- Buddha Bar and Li-Po (I really want to check these out some day). 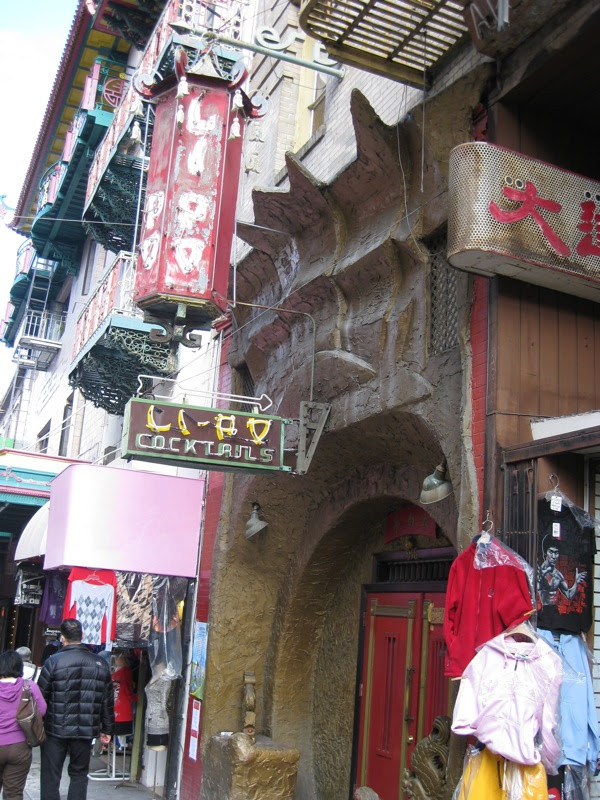 We ended our tour at Portsmouth Square. It was a very nice little walk, one I'd do again soon with other friends and one I'd recommend to you. 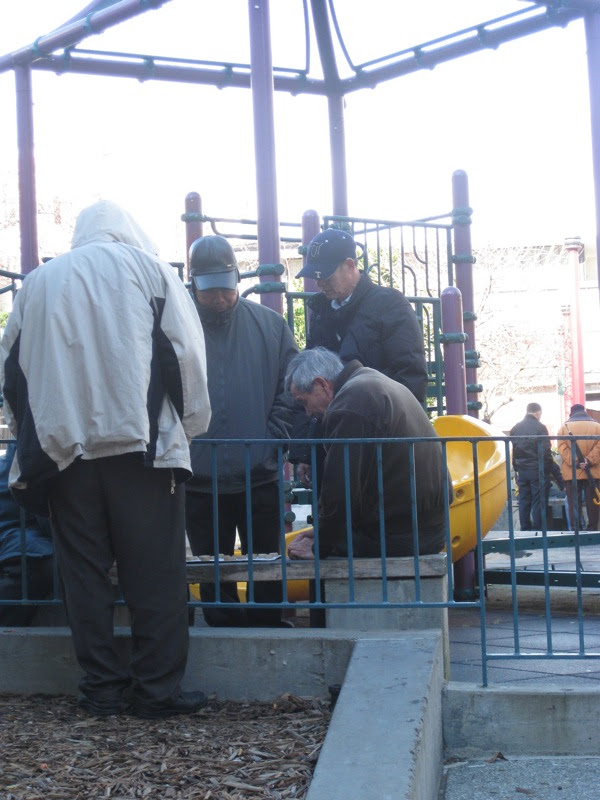 Other recommendations from this trip: great tiki drinks were had at Smuggler's Cove, we had an awesome dinner at Boulevard Restaurant, and we took full advantage of our 3-day Muni passes on the trolleys and streetcars.

How is it May? And how did I forget to post about going to the Olympics? No clue but as our motto obviously is- "better late than never!" 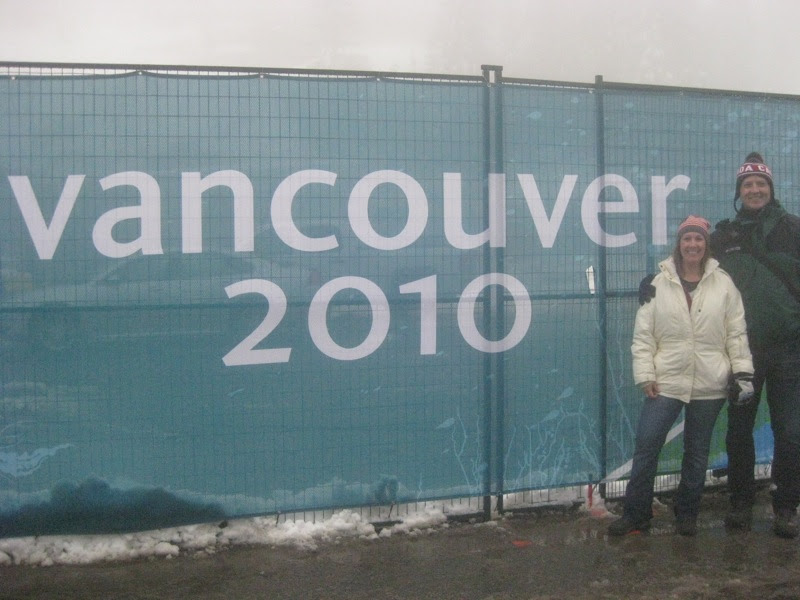 Our good friend Andrew lives up in Vancouver and generously invited us to stay with him during the Olympics so we drove up mid week, found no one at the border and decided to wander around town until Andrew got off work.

Even though it was quite cold and rainy the streets were alive with people dressed up in their favorite country colors. We passed lots of lines to get into various tents, houses and attractions as we made our way to the Olympic Flame which was surrounded by chain link fencing, not very welcoming! 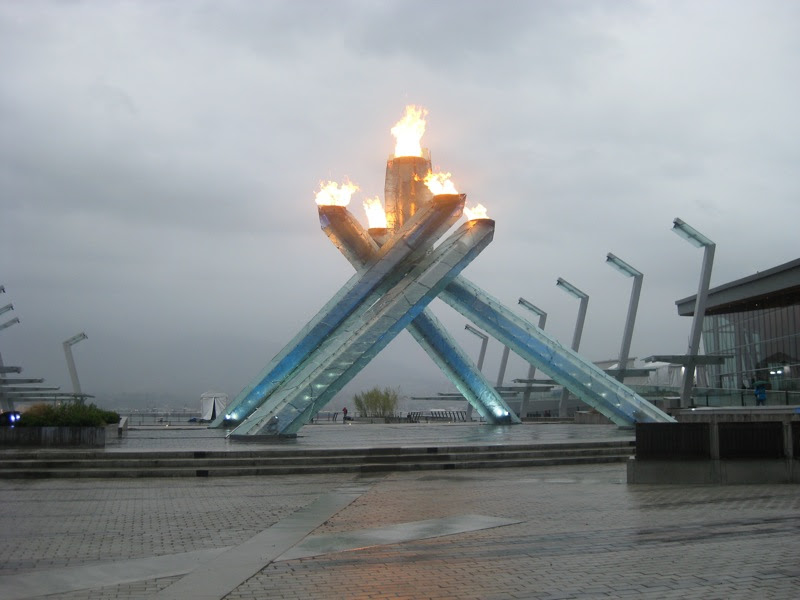 this picture was taken thru the links
After taking a bunch of pictures in the rain we picked up our tickets for our event the next day and headed to Andrew's to meet him, our friend Jeremy who just flew in from Geneva and their friend Allison. A round of gin and tonics while catching up and then out on the town for the night made for a very fun evening of catching up.

The next day we visited a few of the Pavillions and took the water taxi from Granville to the waterfront (I even got to drive it! All you have to do is ask! haha!) 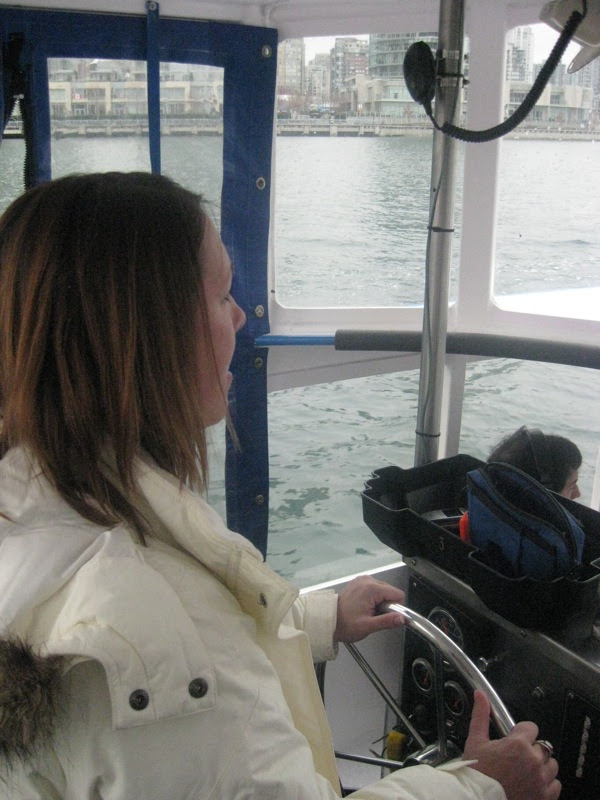 Soon it was time to leave the beer and hockey fans inside the Ontario House and head to Cypress Mountain for our event- Ladies Aerials Finals!

Since no cars were allowed up the mountain we took the ferry to north Vancouver and then caught a bus up to Cypress. The ferry ride was great, I had never been to that part of the city before- really beautiful views of the downtown area, the Olympic Flame and the Olympic rings. 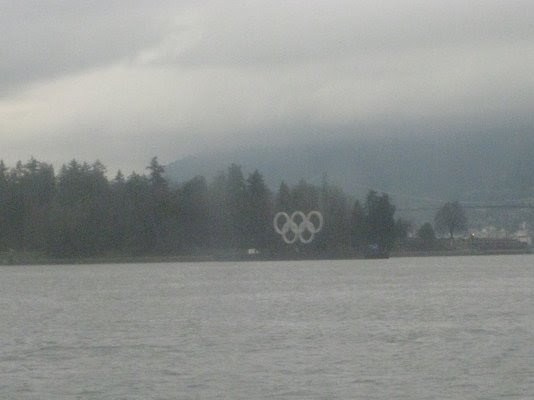 You might remember that during the Olympics Vancouver had the least amount of snow ever! There was a lot of worry about the outdoor events and as we drove up to Cypress we fully understood why. There was literally no snow until we reached the very top and even then it was scarce. But more worrisome was the fog. Thick, thick, thick! As we lined up at the entrance the crowd discussed the possibility of the event being canceled due to it. It was announced that the committee wouldn't make the decision to cancel until the event start time so we tried not to worry about it. Armed with beers and hot dogs we joined the enthusiastic crowd watching hockey semi finals on the big screen, that is when the fog cleared enough to see the big screen! 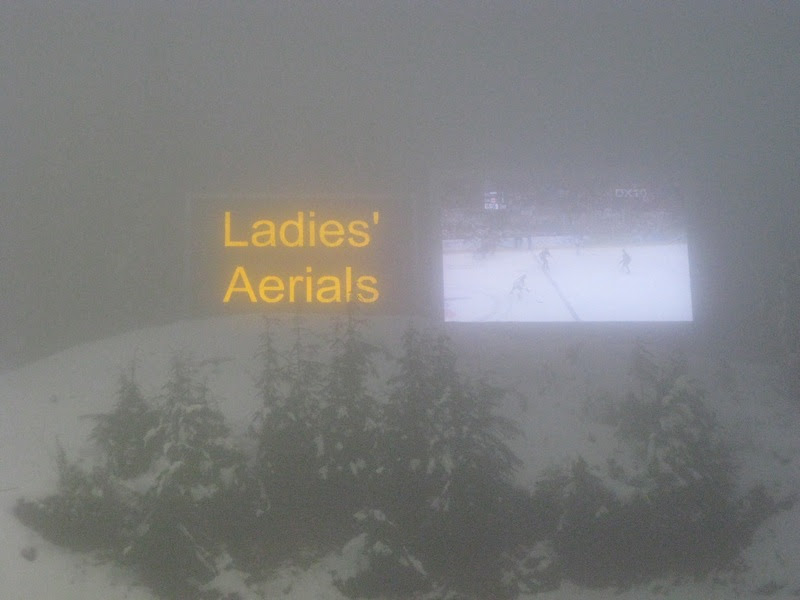 As the women started to do their practice jumps we made our way to our seats. The committee decided to move forward with the event even though the fog stayed put. We found ourselves 9 rows back with an amazing view of the jumps and landing! The crowd was having a hell of a good time, everyone friendly and decked out in their country colors. Since my mother was Canadian and my dad American Dayne and I decided to show support for both countries, but he got Canada haha! 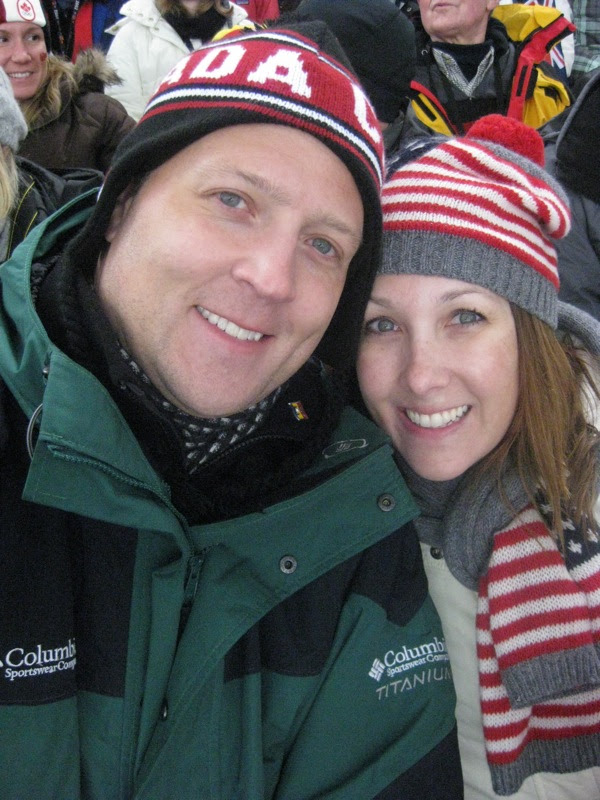 The women athletes were amazing! They flew so high, twisting and twirling and somehow (most) managing to land on their skis. The crowd was LOUD! Fans (including us) waved flags, cowbells, bear bells, etc. and enjoyed every minute, every jump. 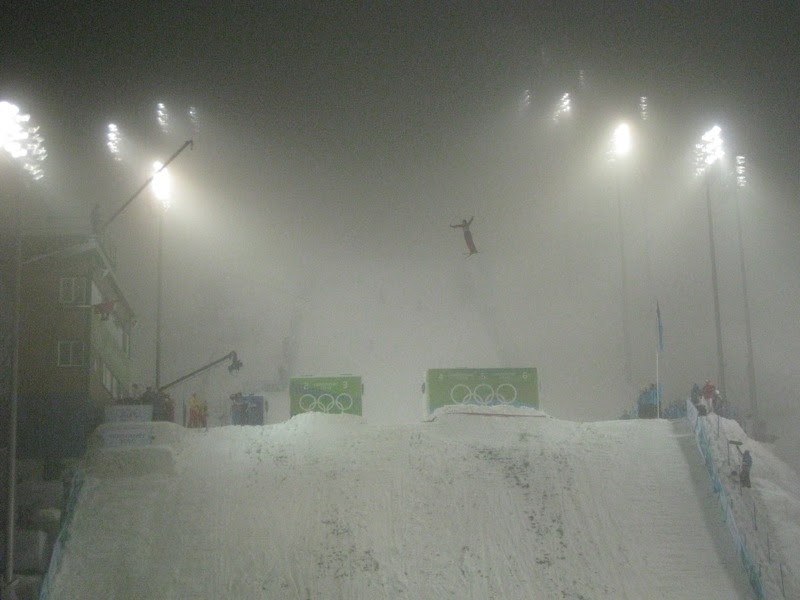 At the end an Australian woman was in 1st and China had the 2nd and 3rd spot. There was one jumper left, the favorite from China. The crowd was going CRAZY!!! Everyone was stomping on the bleachers - I thought they might break apart! Would China take all three spots or would the Aussie hold onto gold? Finally the Chinese woman flew off the ramp, soaring incredibly high, twisting more than should be possible. The crowd remained awed and silent as she came down for the landing. She fell. It was just too big of a jump but she gave it all she could knowing it was the only way she could medal. The crowd cheered and gave her a standing ovation, it was well deserved. 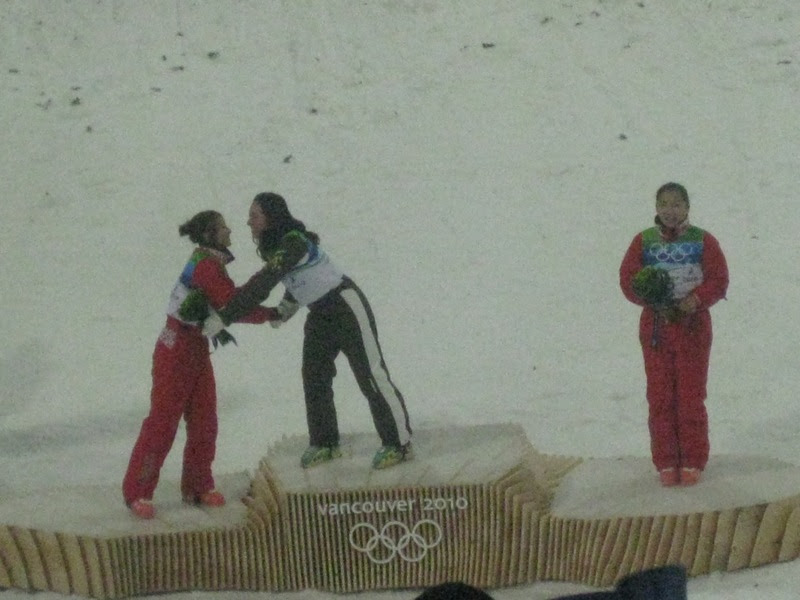 And then the Aussie fans went insane! Their girl was bringing home the gold! But it almost didn't matter which country was on the podium. It was one of the most exciting things I've witnessed. I've attended many professional basketball and baseball playoff games where the level of competition is high but this was different in that everyone cheered for each other and the camaraderie was genuine. We really felt part of the world, not just our country or state or city. It was emotional and as I type this I have to admit I feel emotional again!

Our too short trip wrapped up the next day after taking in more of the attractions, tents and crowds with our friends. We were still on a bit of a high from the night before and I think Dayne was really contemplating competing in Sochi 2014 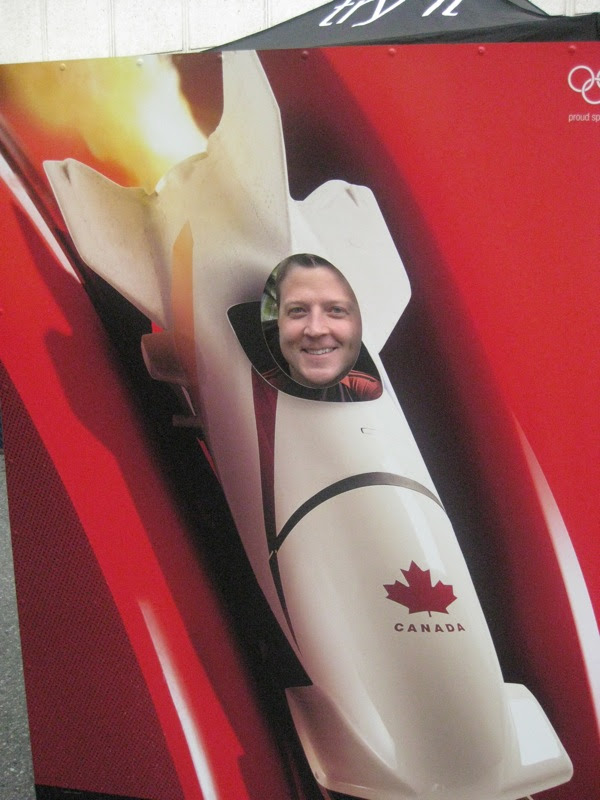 We felt lucky to have been able to experience the city, it's people, it's visitors and the games.  All photos can be found here

By the way while in town we really enjoyed and would recommend Pourhouse for cocktails, Lin Chinese for amazing soup dumplings and Nando's for peri peri chicken that we brought home for dinner!
at May 04, 2010 No comments: