After 3 nights in Dingle it was time to get back out on the road. I had a great mini full-Irish breakfast in the Dingle Benners Hotel before checking out and getting back on the Wild Atlantic Way. It had been nice to have a few days without driving especially as this day was going to be a big one.

By the time I got to Galway I'd have driven 145 windy North Atlantic Ocean hugging miles. Not really that far but with my planned stops it would take over 7 hours. You can drive directly from Dingle to Galway in about 3 hours, but what fun is that? Also I would be stopping at the Cliffs of Moher and was very excited! 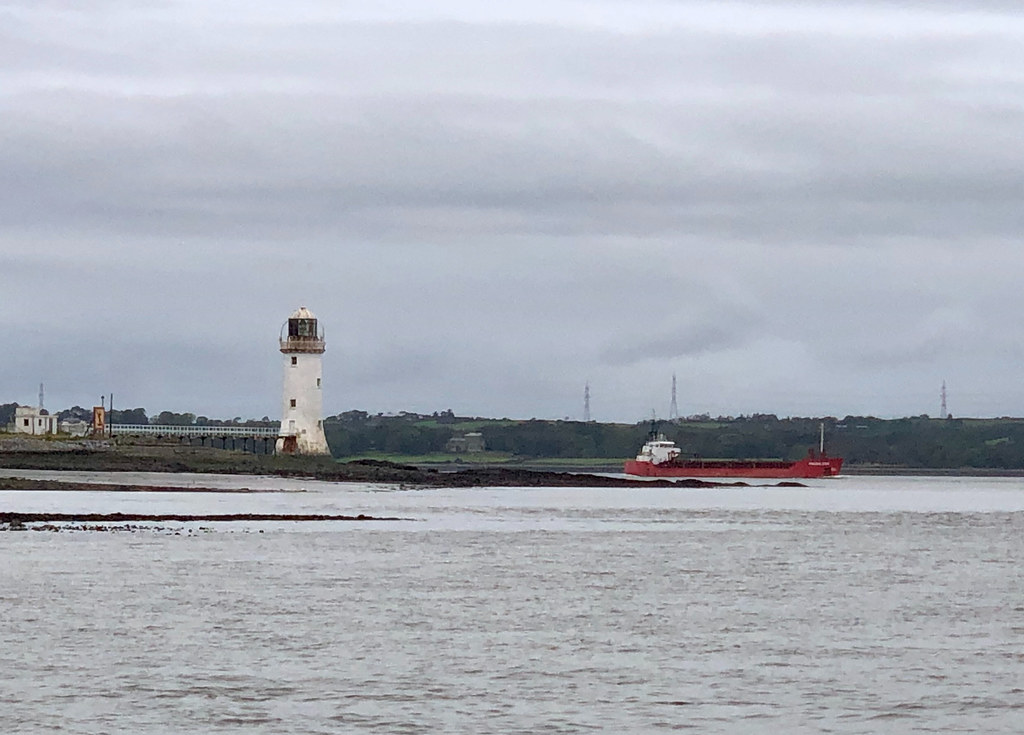 I left Dingle and headed to Tarbet where I queued up for the car ferry across to Quilty. As I got out of my car to take some pictures of the approaching ferry a man told me about the old lighthouse that can only be seen if you head out to the very end of the dock; he assured me I had time before boarding and I did. 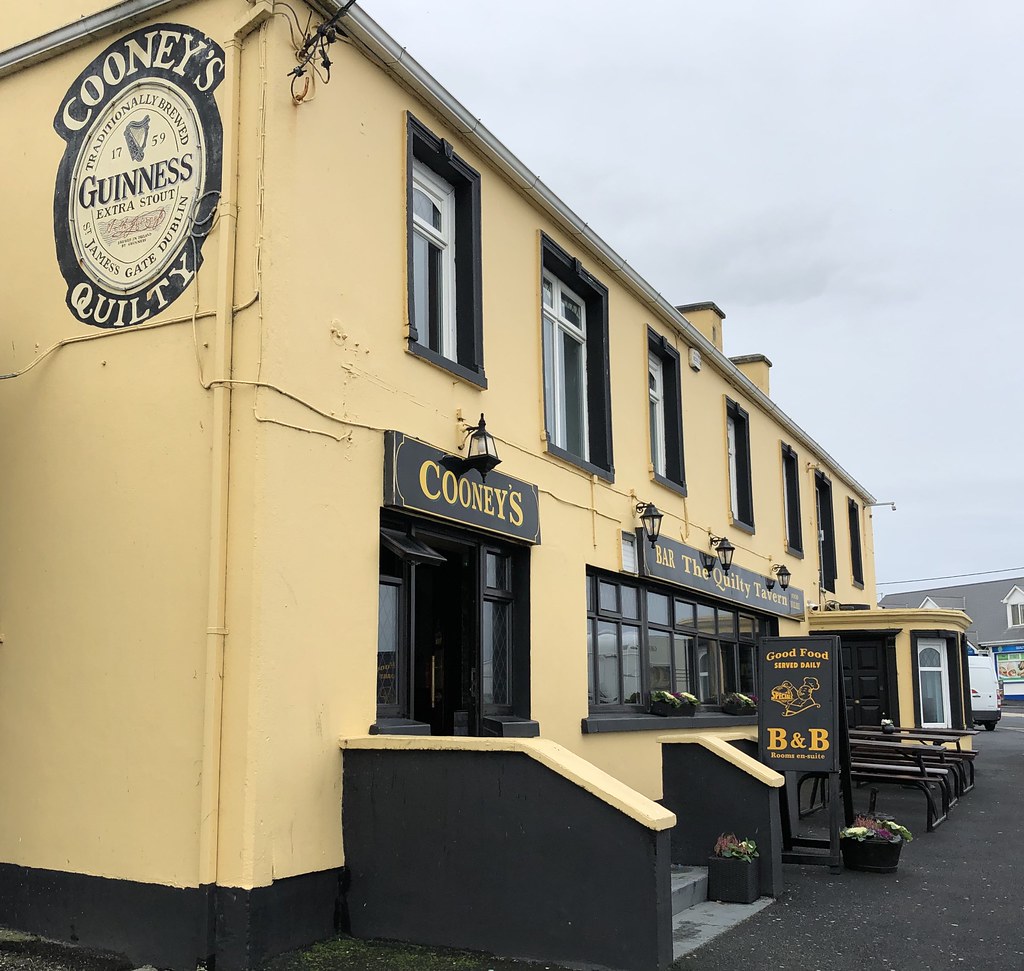 It's a quick ferry crossing and the weather was dry but it still took about 3 hours to get to Quilty. I stopped for lunch at Cooney's Pub and had an excellent seafood chowder and small beer. 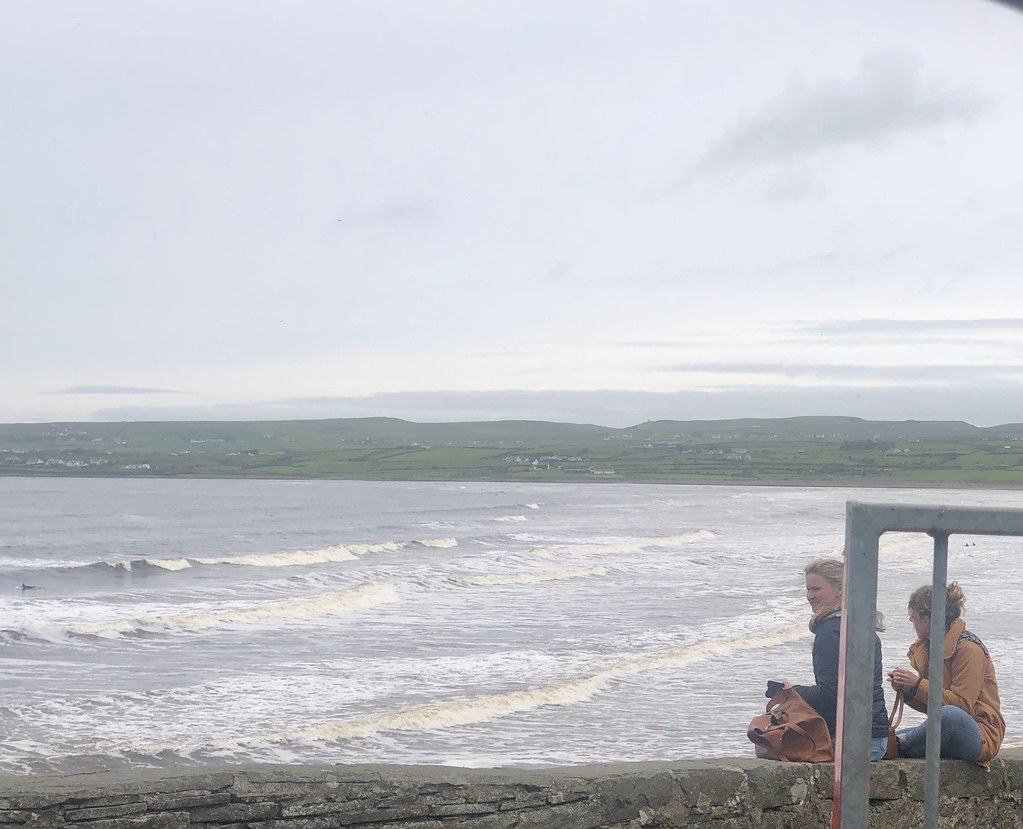 In 30 minutes I was at the famous Cliffs of Moher. It was strange driving up and into the large parking lot, you can't see the ocean or any part of the cliffs. But then you follow the walkway and bam!

Even in the cloudy weather the cliffs are dramatic and beautiful! I spent some time walking both sides of the semicircle, taking in the views. As with any tourist site I also saw people being totally crazy, like this wedding couple who let their photographer perch them on the edge for a dramatic shot! 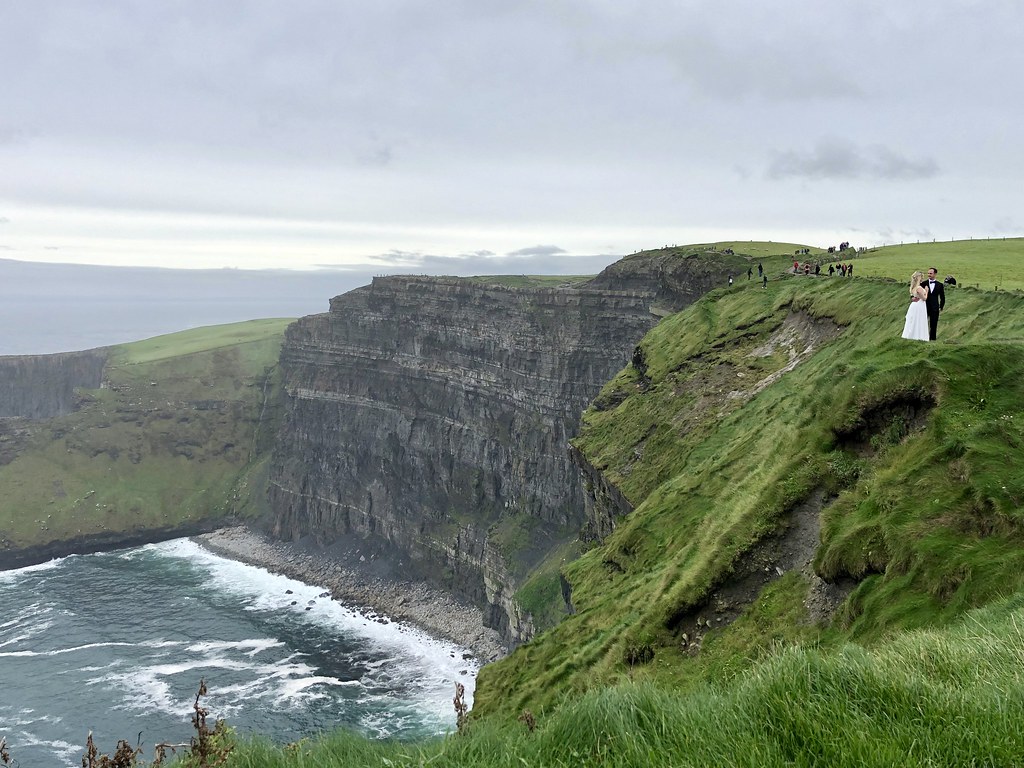 The people you can see in the above photo, far in the distance, are hiking a "forbidden" trail that is crumbling down the cliffs. I even saw people scoot themselves down the cliffs a bit for a better picture! I stuck to the paved trail! 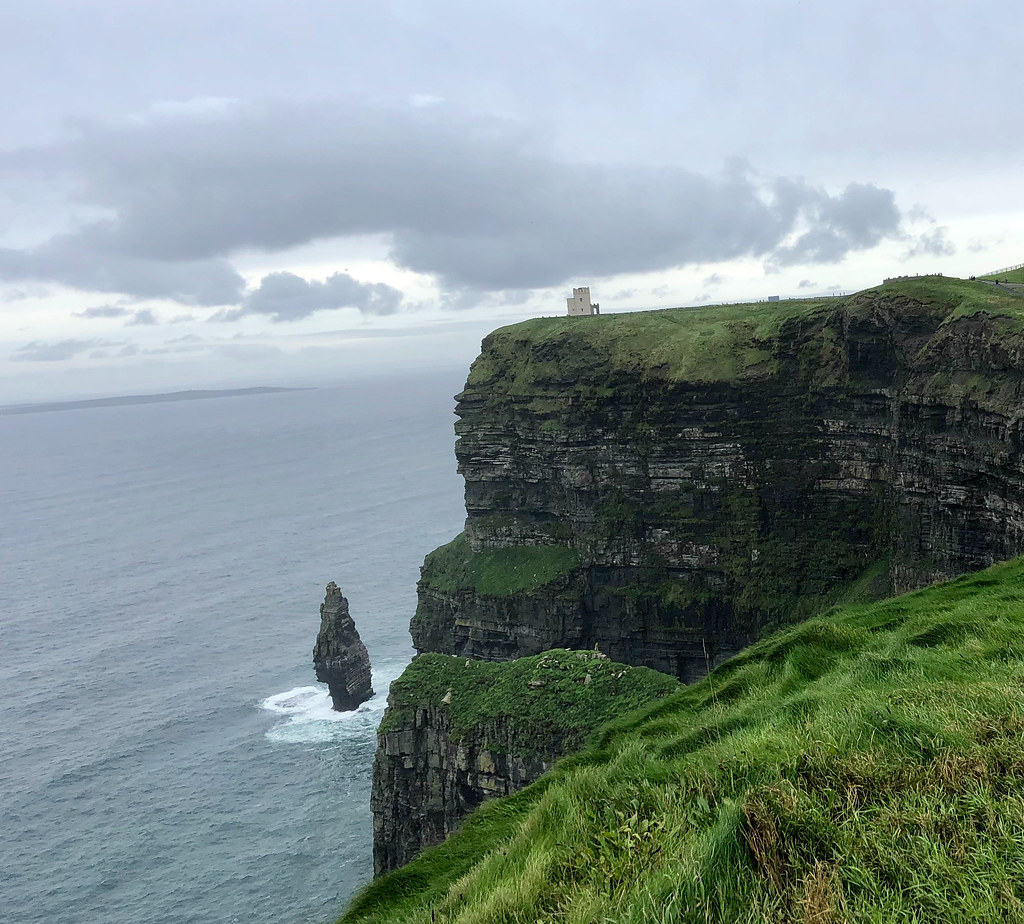 On the way out I stopped into the visitor's center and had a quick look at the exhibitions. It had started to rain so my timing was good! There's no charge to visit the cliffs or the center but you do pay a couple of Euro to park your car.

I had another 45 minute drive until I arrived in Burren. Multiple friends had recommended the Burren Smokehouse for delicious smoked salmon and cheese, and they were spot on! I was lucky that I got there right before closing. 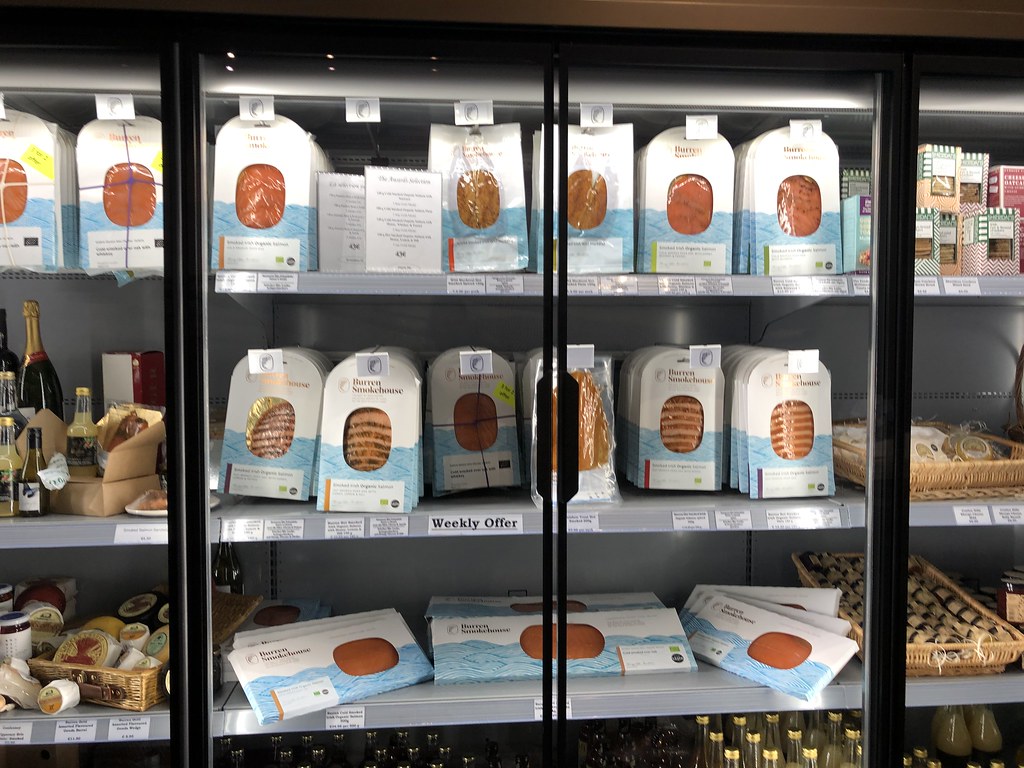 It was getting late now and I still had almost an hour before arriving in Galway. But when I passed gorgeous ruins like the Muckinish Tower House I just had to stop for a few photos. 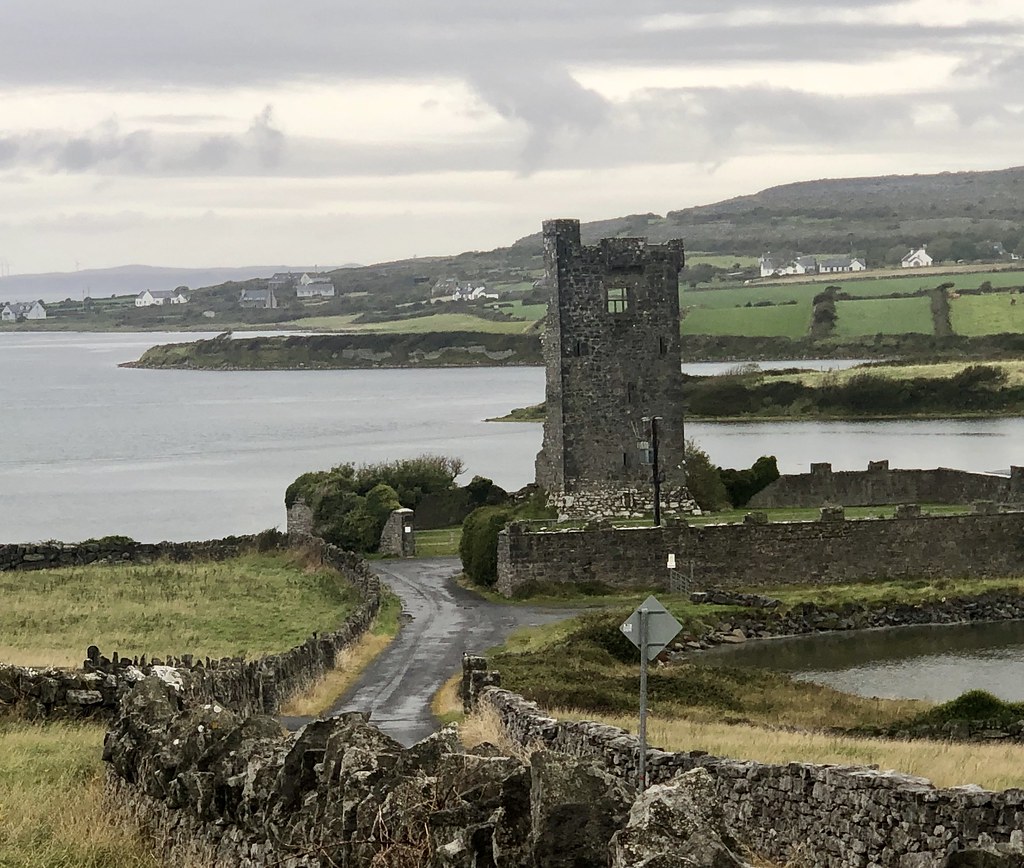 It was dusk and raining when I finally arrived in Galway. After being in such quaint small towns I was a little shocked by the traffic! The city only has a population of 80k, but compared to the 2k in Dingle... I'm sure you can imagine!
I had used Alaska Airlines miles for my stay at the 4 star Park House Hotel, which is very central and also has parking. It took some time to actually find their connected lot, hidden down an ally, but much better than having to try to find parking in the city. 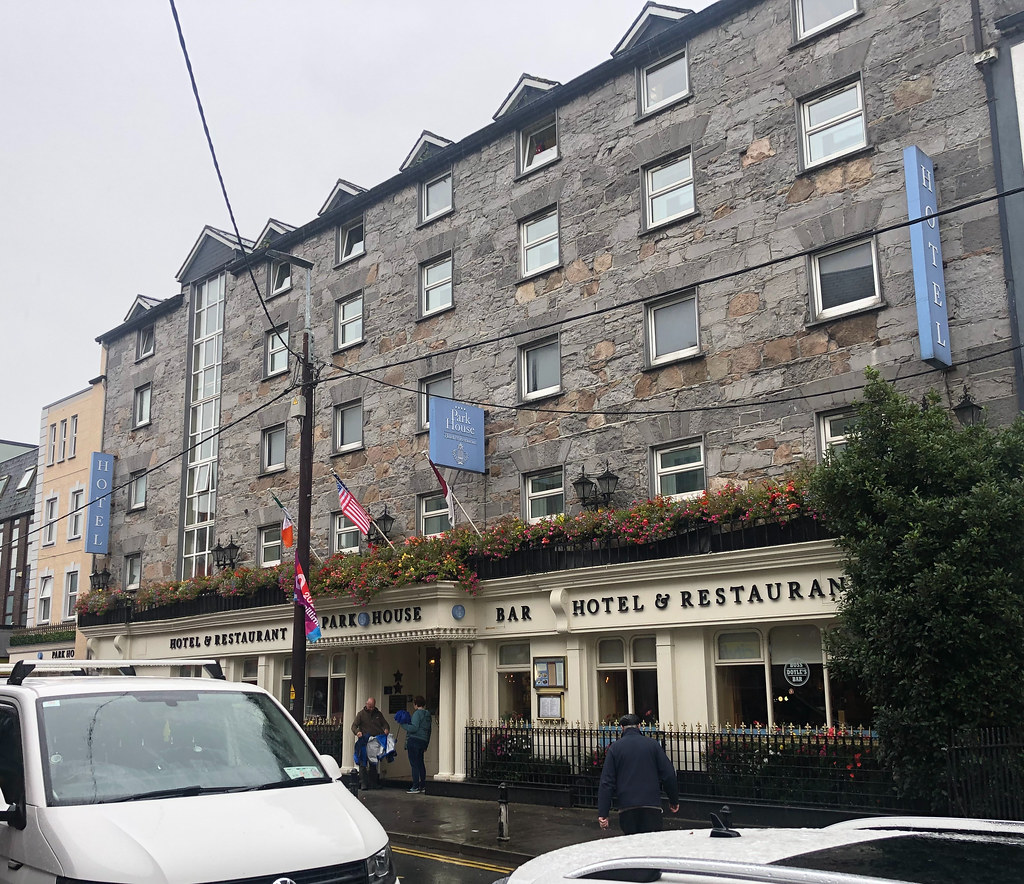 My room was big but was in desperate need of a renovation! There was a "safety" light that remained illuminated all night right by the door to the hall. I figured out how to cover it with a trash can or I wouldn't have slept at all. The hotel is large and old and seemed to cater to a lot of tour groups. Not necessarily a bad thing, just an observation.
They did have a big, busy bar and after a full day of driving I was ready for a martini! 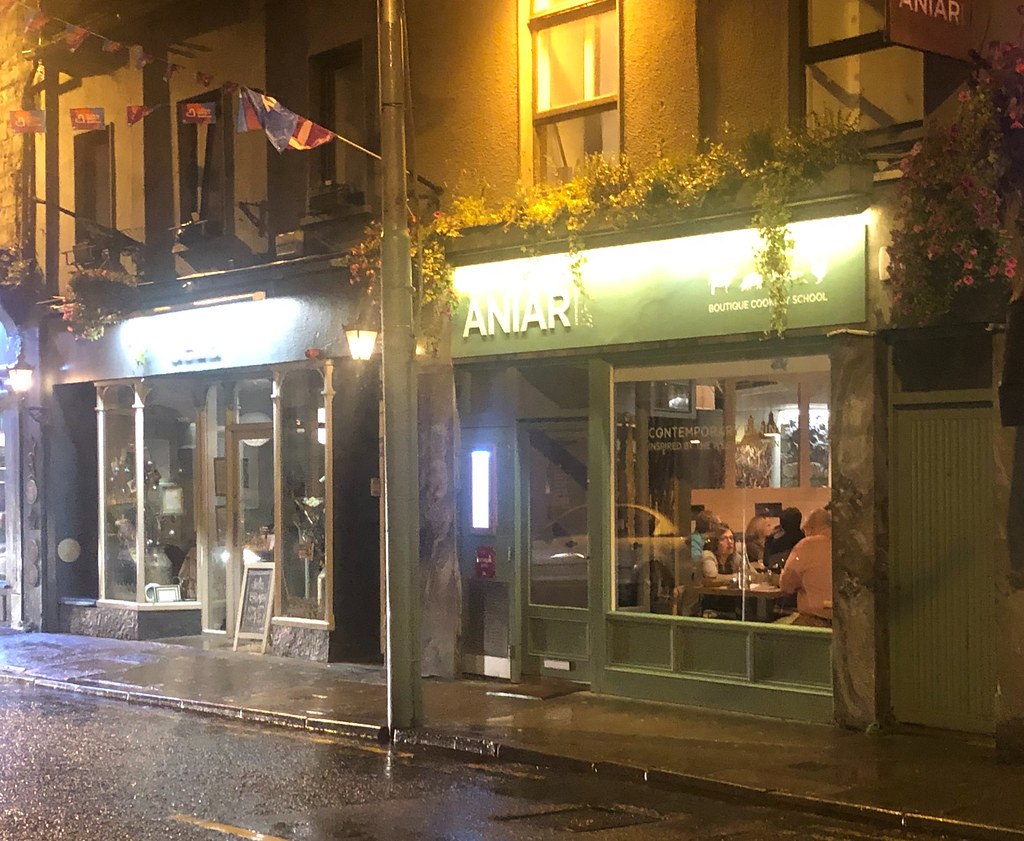 That evening I had reservations at Michelin 1-star Aniar Restaurant which had been recommended by a few of my friends. I was excited, and hungry! I walked over in the pouring rain and was very happy to give up my wet jacket and settle into to the cozy restaurant.
Aniar offers a tasting menu of dishes primarily from local producers, farmers, or the wild. The multi-coursed menu was €75 and I also had the wine pairings for €35. 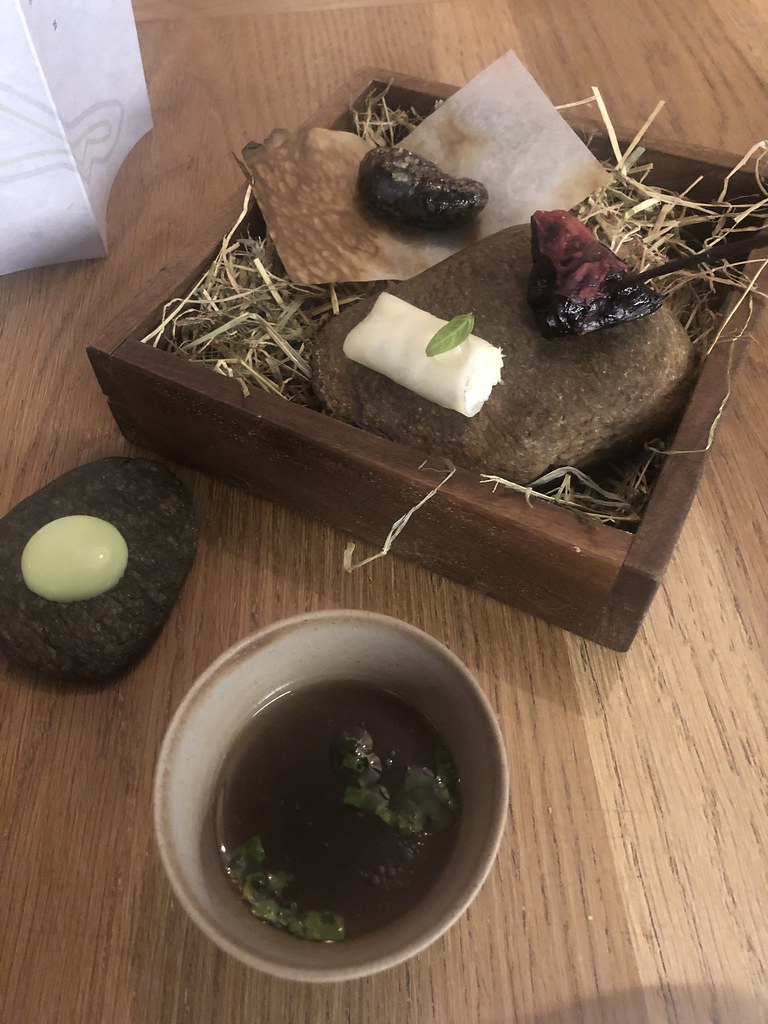 Dinner started with small bites, served together on a tray with stones, hay, and a warm towel (not to be eaten). Crab with lovage, beetroot with rose, potato with parsley, kelp with sea radish. All were delicious and perfect for settling in with a glass of Txakoli. 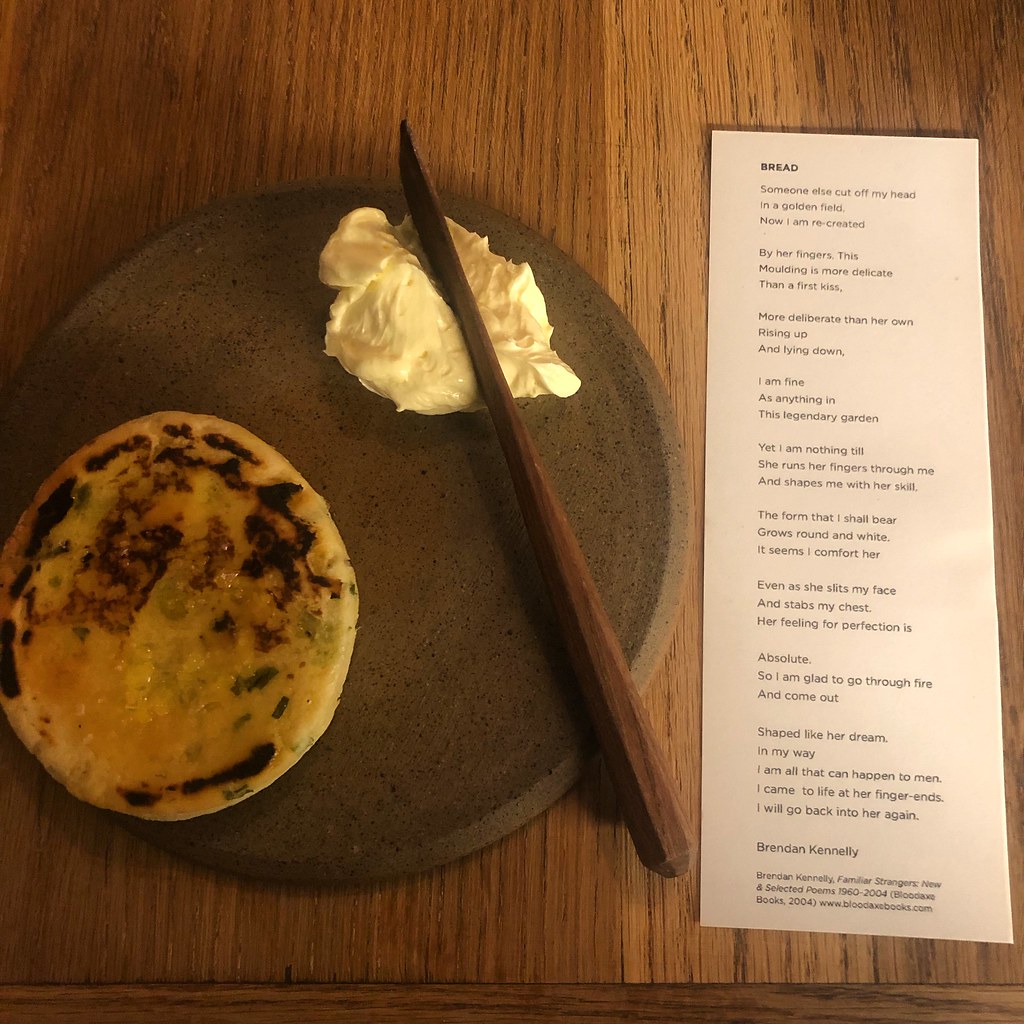 The potato bread arrived along with some glorious butter and a poem. Now that is a first! They also sent me home with a recipe for the bread. Next came three more small courses paired with a lovely Loire muscadet. 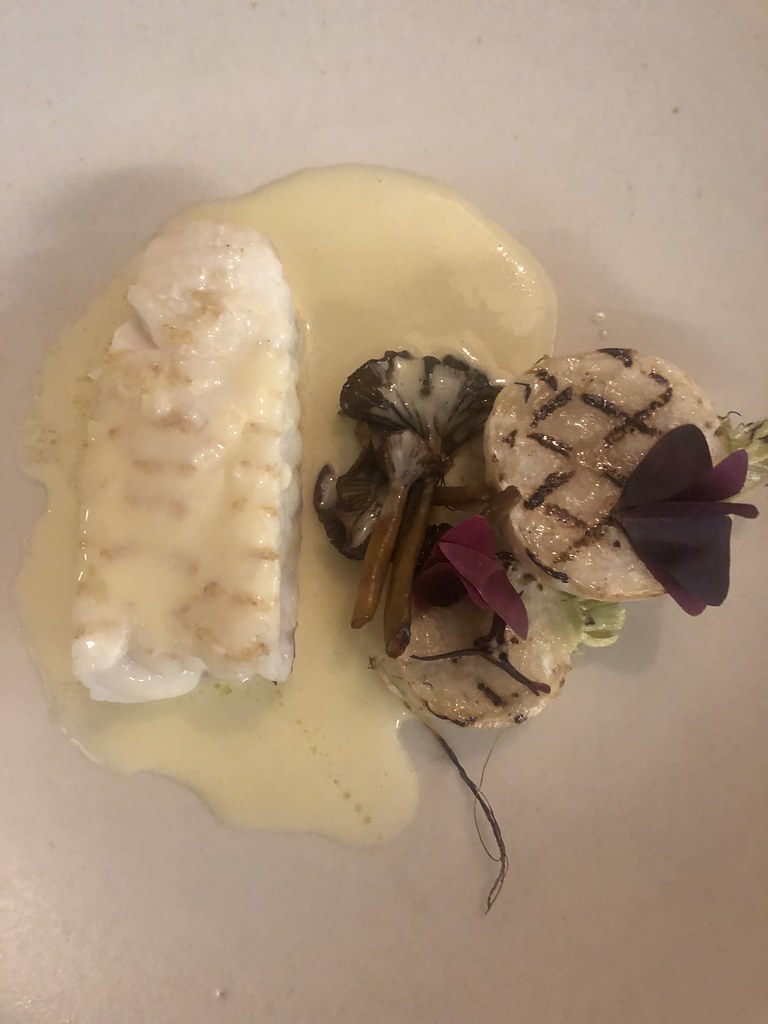 My main of monk fish and turnip was so beautiful (and perfectly cooked) and was served with a gorgeous Roussanne from the very talented winemaker Eric Texier. Stunning pairing.
Two small desserts, both with fresh fruits, ended the meal. I was especially impressed with the singular slice of absolutely delicious melon and another solid pairing with a Zantho Beerenauslese, a dessert wine from Austria. 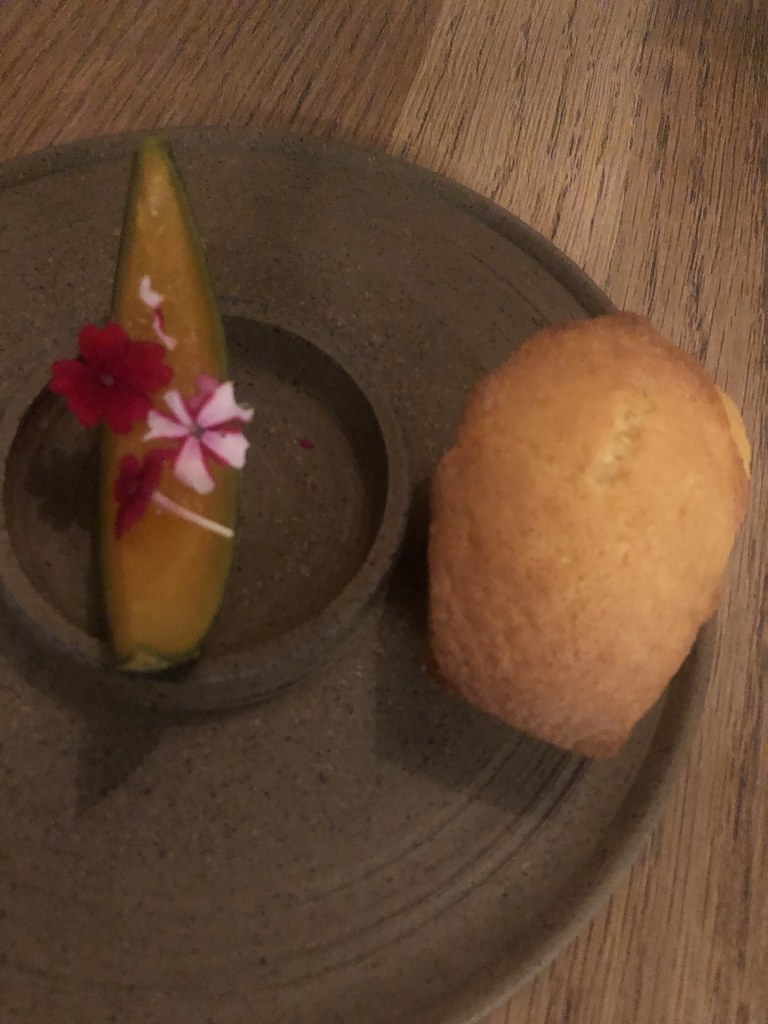 Throughout dinner there was a son and his mom at the table next me; as they were obviously American and this sweet little restaurant isn't on everyone's radar, I asked how they came to choose it. The son responded that his friend Sconz had suggested it. I asked if his friend was Doc John Sconz and we both laughed when he said it was! John is a friend of mine who I did an amazing Spanish food & wine trip with a few years ago. Turns out he had met John on his Bourbon trip. Such a small world!
Breakfast the next day was included in my Park House Hotel rate, a pretty good spread of breads, pastries, yogurts, etc to go along with whatever you ordered from the hot menu. 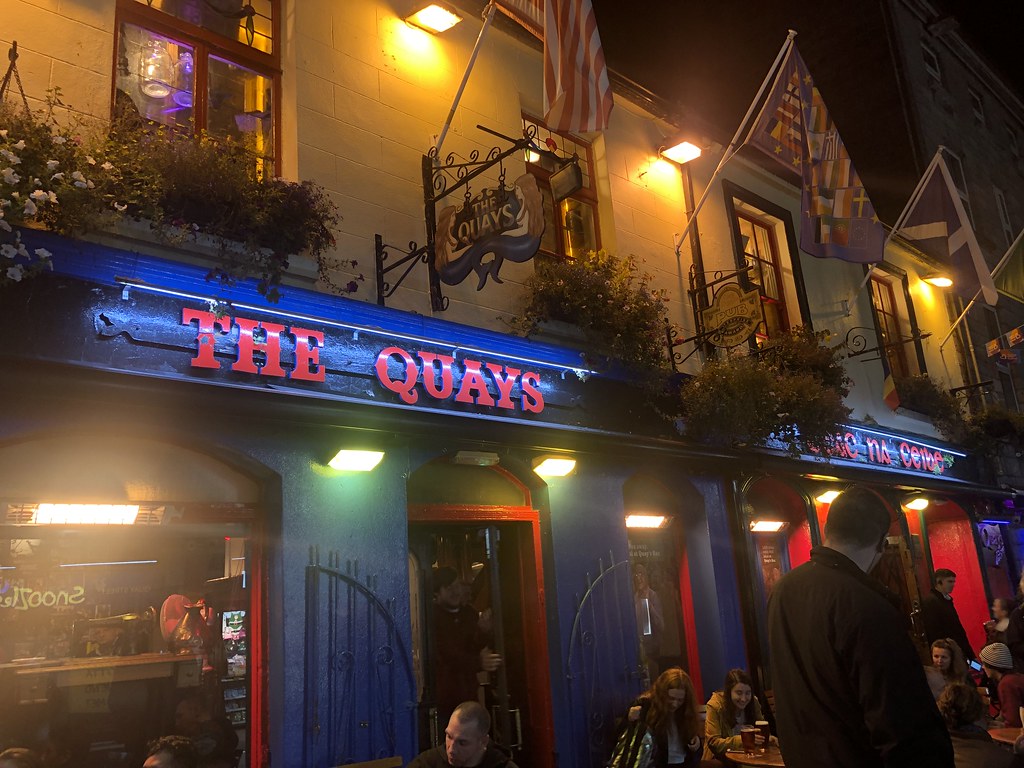 Thank goodness the weather cleared a bit so I could walk around Galway with being completely soaked. I had a day-trip to the Aran Islands planned for the day (more on that later) but was back in time to stroll around the area between Eyre Square and the Spanish Arch. This area is filled with pubs and restaurants. But it was also Sunday so my picks for a good dinner were scarce. I finally ended up at The Quays, a very well known and popular pub and restaurant. I had a very meh meal of some oysters and a chowder, and although I had planned to stay for the band, they were playing American rock which I can get at home. So I set off in search of something more traditional. 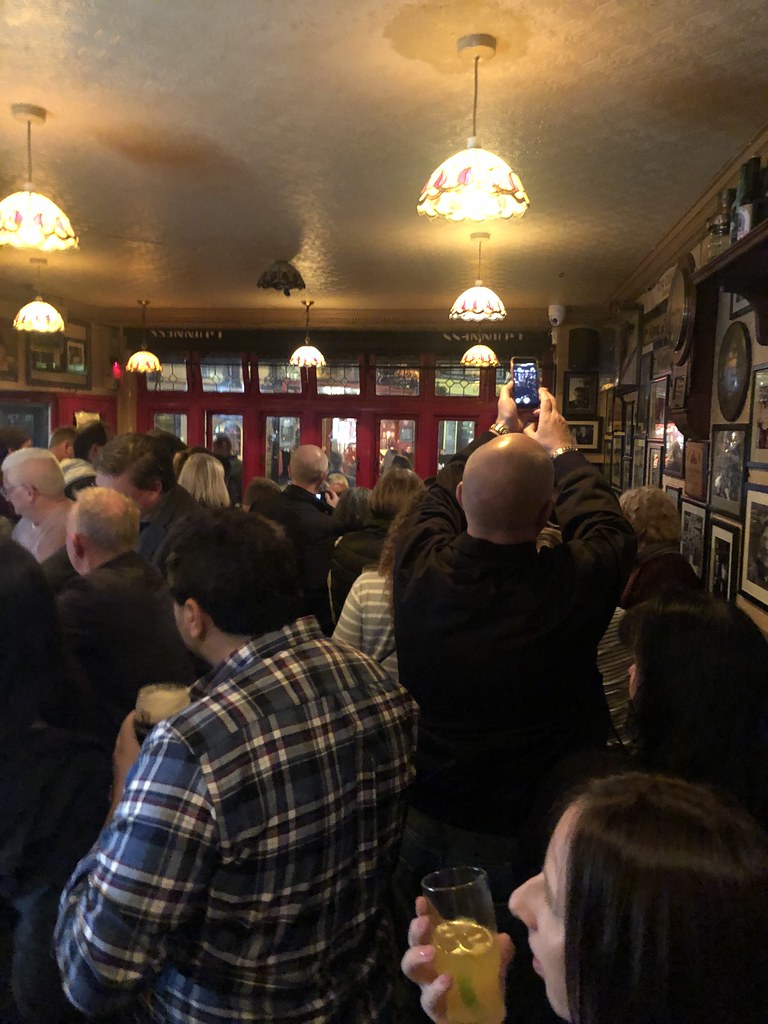 I walked past Tigh Chóilí and decided to stop in, it was packed! The music was good but it was just so packed I could hardly move! I had a nice chat with a local guy, listened to a few songs, had a couple of pints of Guinness, and after 2 hours decided to head back to the hotel to wash my hair. It's a girl thing :)
I found a great gourmet market the next day while shopping around, called McCambridges, and stocked up on some more smoked salmon (Barron Smokehouse is carried by them), cheese, some gin, etc. I had a 1 ½ hour drive to Westport where I would be meeting up with Forest and Nicky!
I'm not sure if it was the weather, or the college town vibe, but Galway was just ok for me. I much preferred the smaller towns of Dingle and Kinsale for music and pub culture. 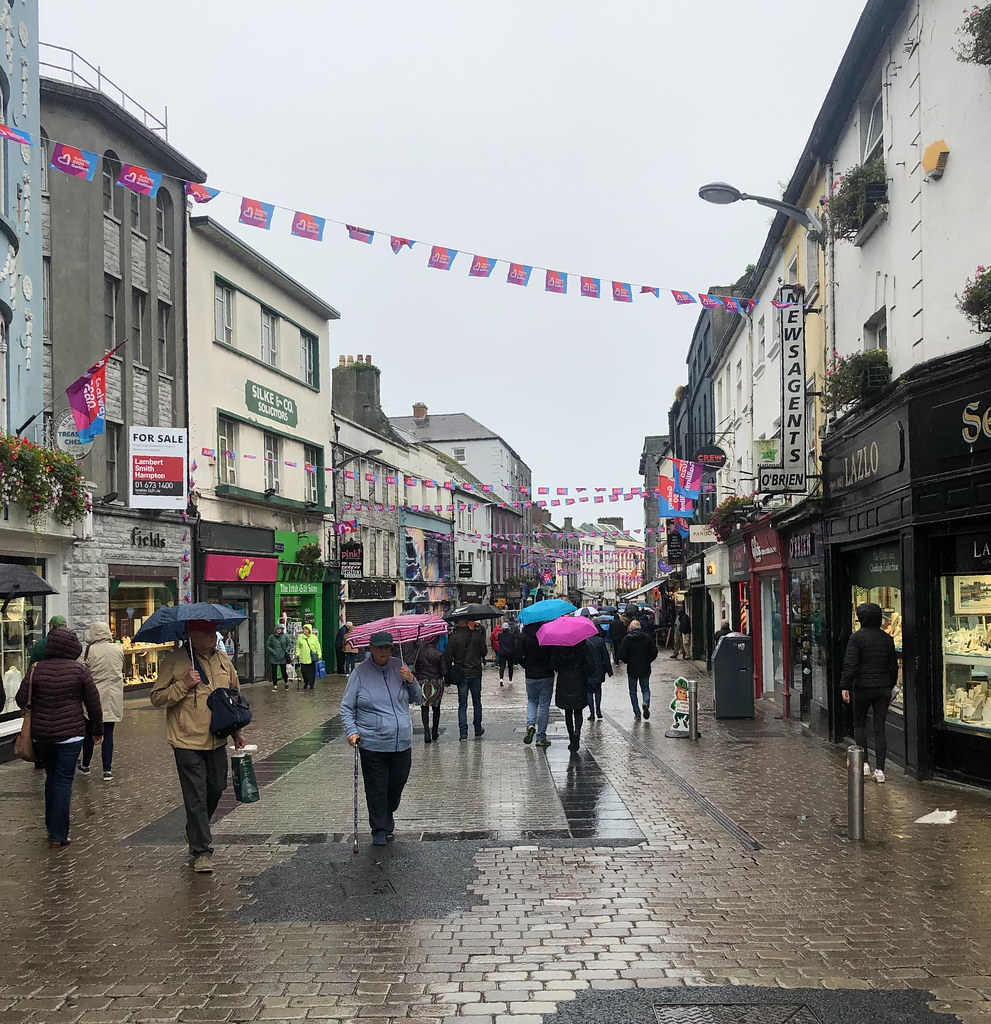 All photos of the Cliffs of Moher and Galway here.