County Kerry is well known to have some of the most beautiful and dramatic landscapes in all of Ireland. My first night in the county I was staying in Kenmare which was a great jumping off point to the Ring of Kerry. Before arriving in town I had made an appointment at the Kissane Sheep Farm for a demonstration of sheep herding and shearing. 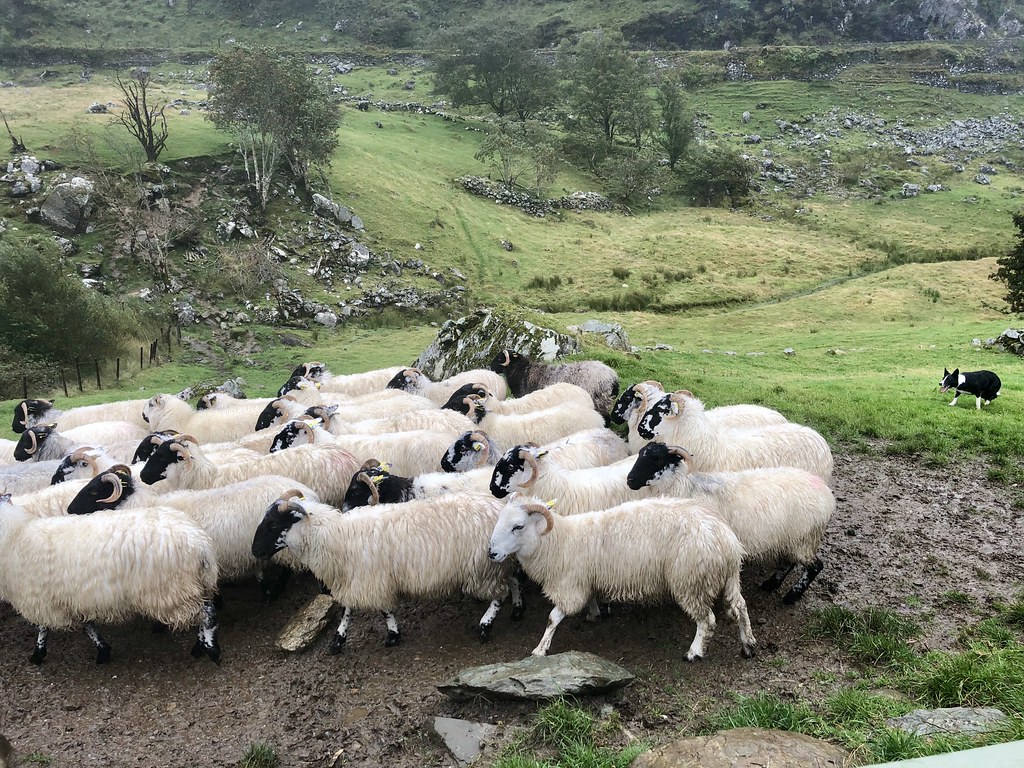 The drive from Kinsale in County Cork only took about 2 hours but it was raining incredibly hard the entire way. It's a gorgeous drive though; vibrant green hills, old stone bridges, big estates.

The farm is tucked into the hills of Moll's Gap. I arrived and at the appointed time the gates opened so I could drive down the way and park outside of the shearing barn. We were a small group of visitors, the others were traveling together on a minibus, and the only people truly decked out for the rain were the sheep farmers. 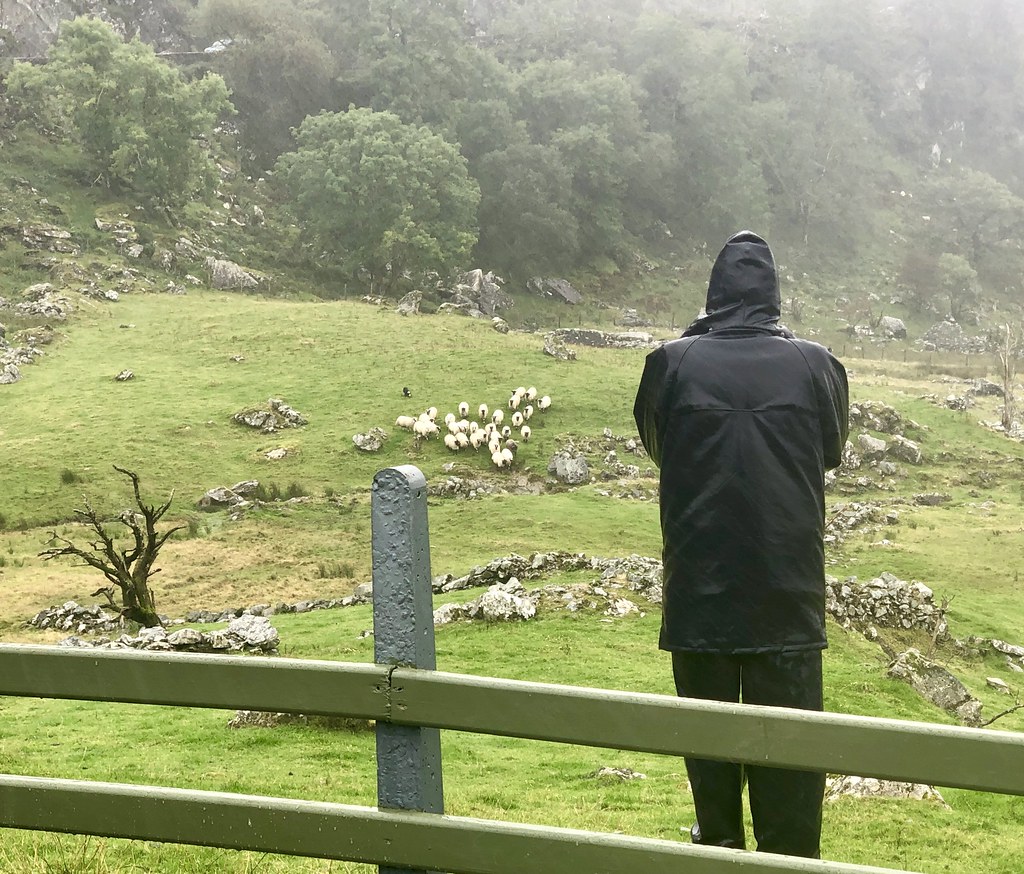 We moved into the barn after watching the dogs in action and sat down for a sheep shearing demonstration. It was pretty impressive how fast they were able to do it! And also how the dog kept his eyes on the sheep the entire time! 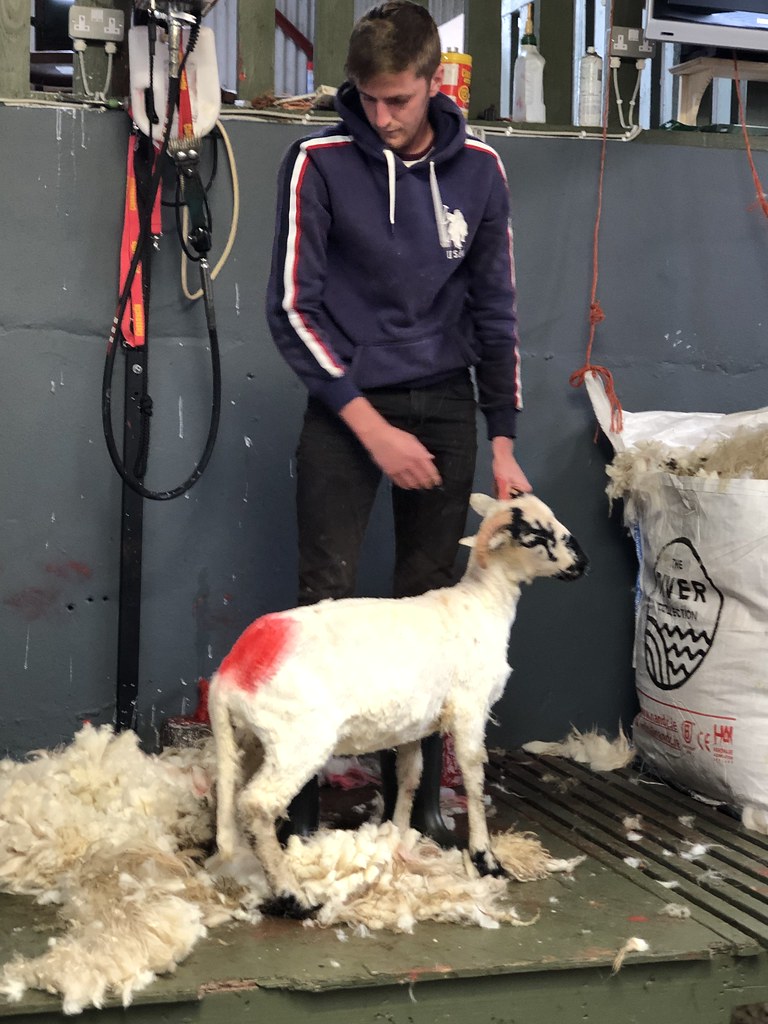 The farm has been a family business for over 200 years. In 2005 they started doing demonstrations of their sheep dogs herding and tours of the facilities in order to help pay the bills. They also sell some locally made products to support their neighbors. I thought it was great, even in the dumping rain!
It was a quick 15 minute drive to Kenmare where I checked into the Lansdowne Arms. The hotel is fine; its days of being a grand hotel are firmly in the past however. The furniture is old and worn, the wifi is almost non existent, and there are so many hallways, because of additions to made to the original hotel built in 1799, that I felt lost. 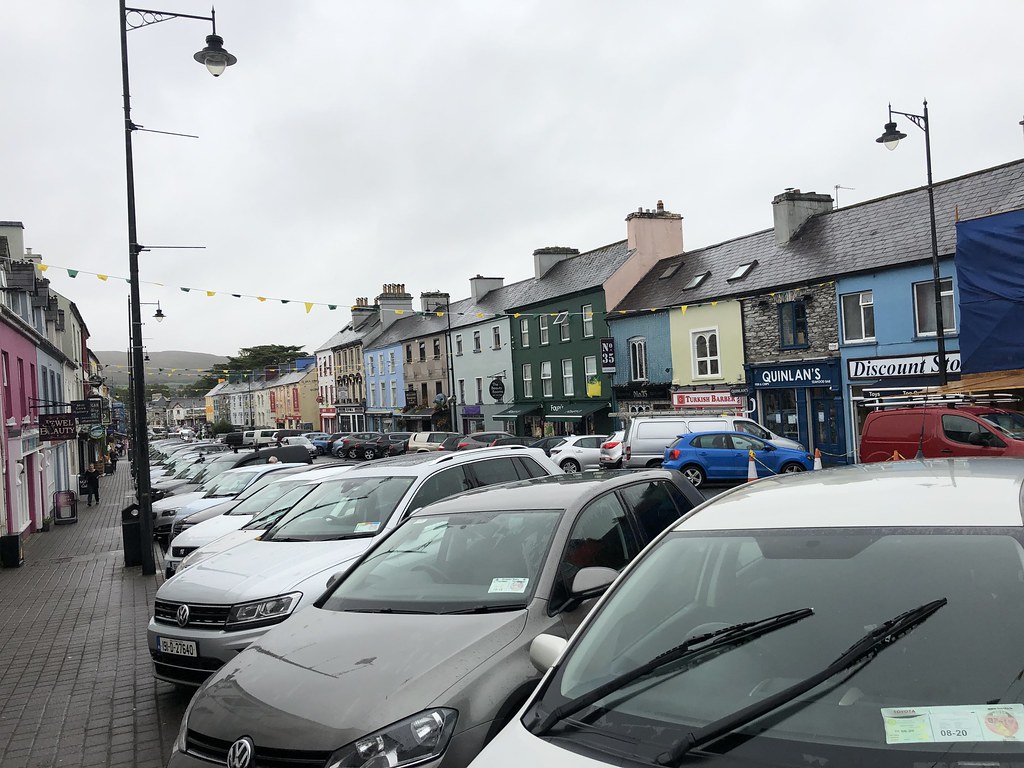 Kenmare is a very small town with a population of about 2500 and is laid out in the shape of an X making it very easy to walk around. The front desk pointed me down the street to their sister restaurant The Wander Inn and recommended the mussels. So that is exactly what I did! 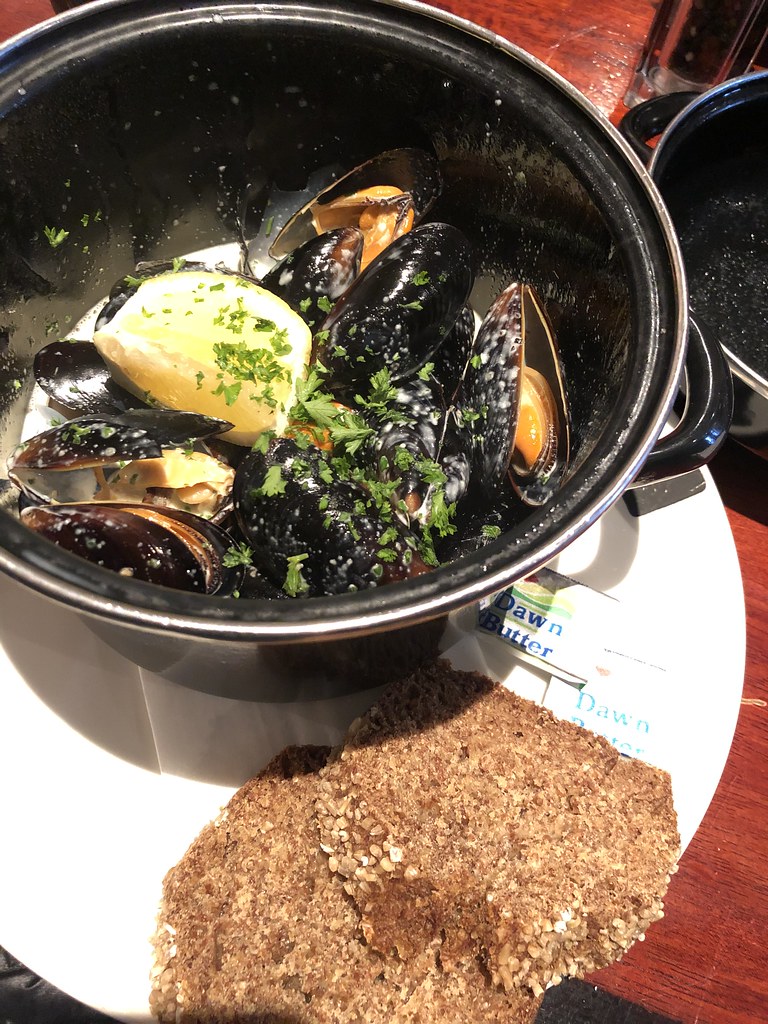 Brown bread and a pint of Guinness rounded out my delicious lunch. The rain had finally let up, I had warmed up, and now I was out to explore one of the town's claims to fame. Over 3000 years old, the Ancient Stone Circle is just a 5-minute walk from Main Street.  There use to be an honor box that you dropped your €2 in but now the site is protected by a fence and an attendant who will exchange entry for your money. 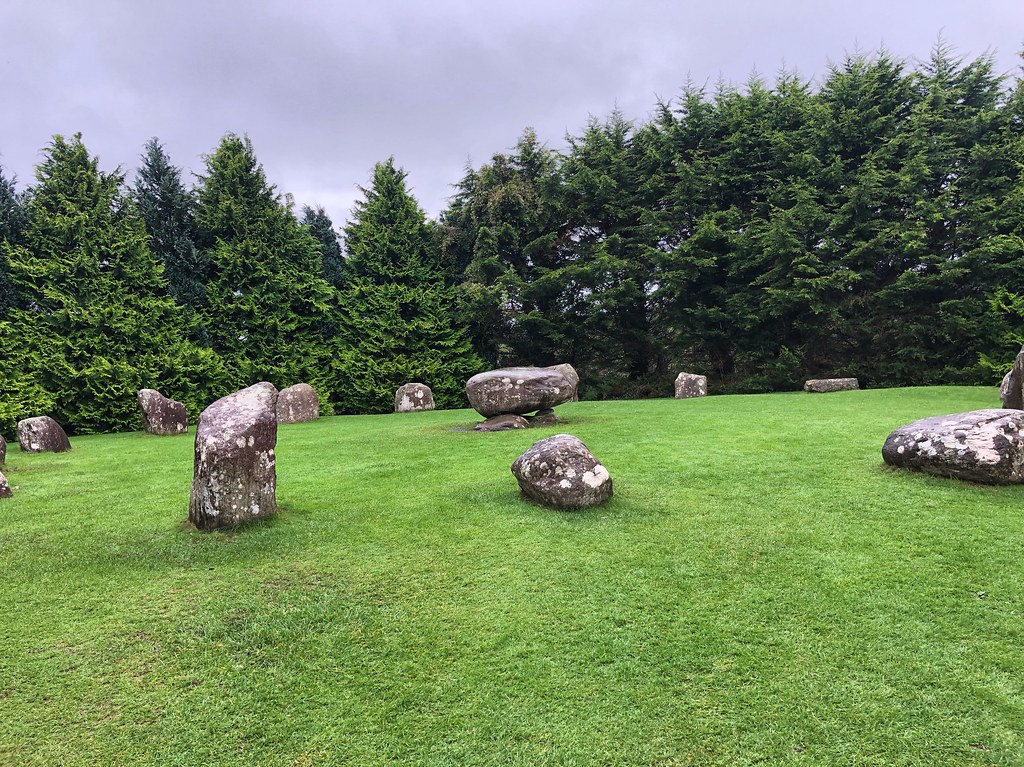 They aren't really sure what the stone circle was used for, it's a bit of a mystery, but it's an interesting site to visit if you are staying in town.

That evening the bar at the Lansdown Arms was very empty so I went across the street to Mulcahy's where I found a very nice selection of gin and a bartender who made me a proper martini! So nice in fact I ended up having two :)

Afterwards I stopped into No. 35 for a light dinner. They were kind enough to let me just order a couple of appetizers as usually they only serve a 3-course set menu. My food was delicious and I'd absolutely recommend an evening here! 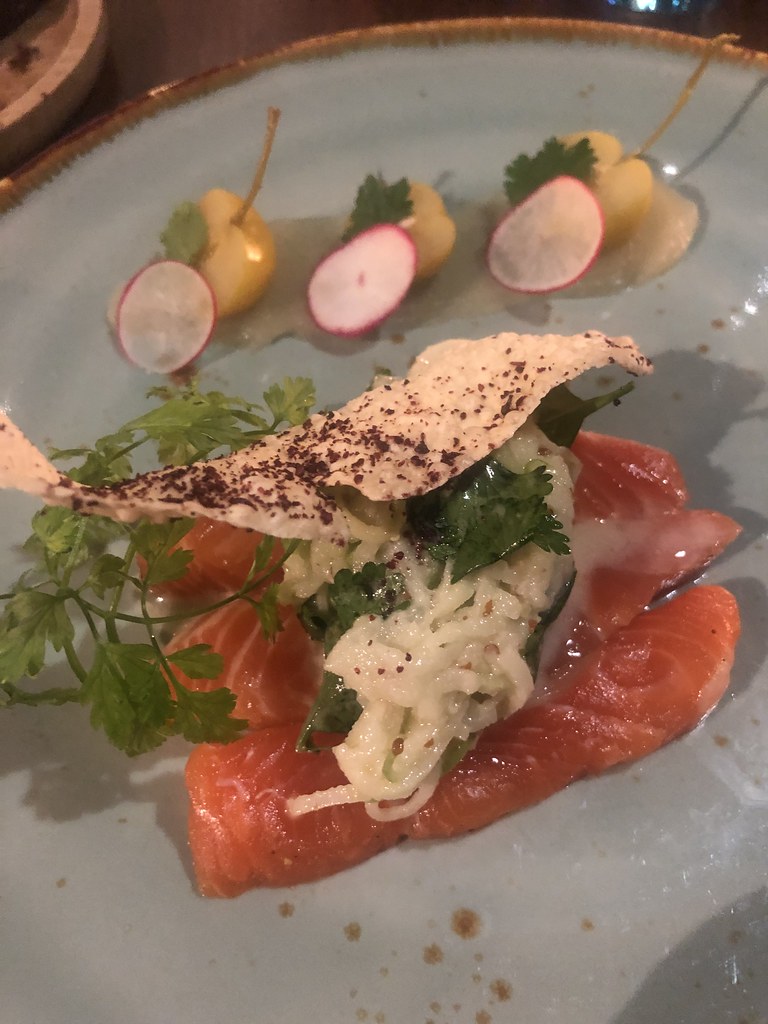 The next morning after breakfast of decadent porridge with cream and a side of bacon in the hotel, I checked out, loaded up the car, and was off for my big drive around the Ring of Kerry. This would also be my start of driving the Wild Atlantic Way 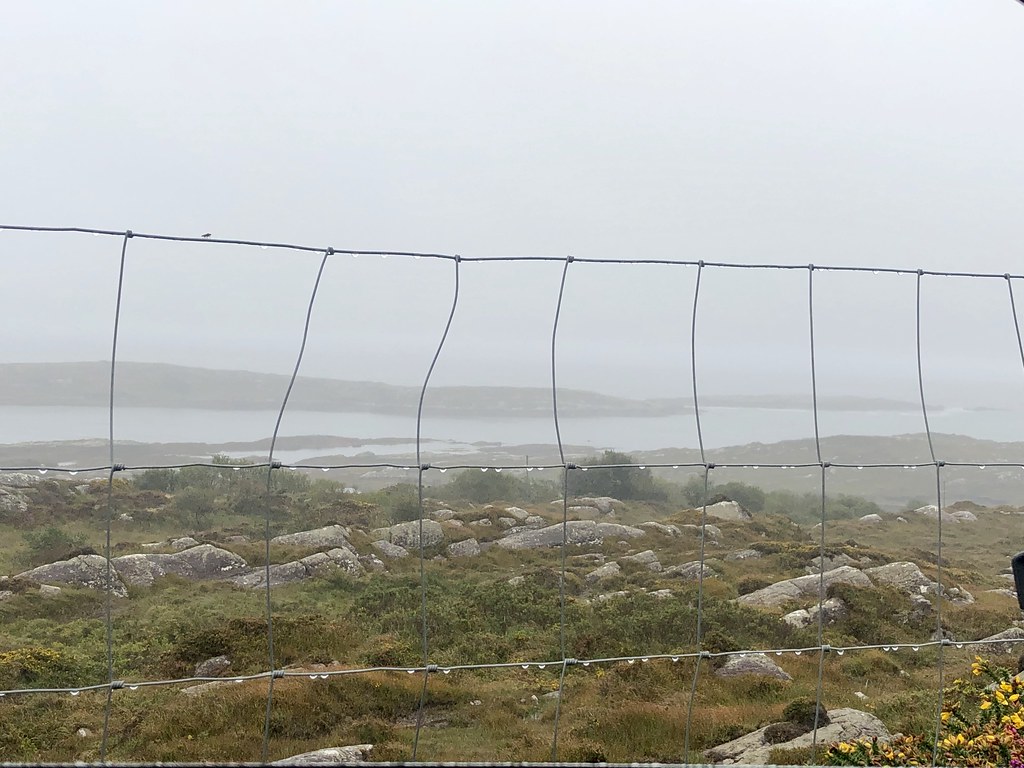 Unfortunately the day was drizzly and foggy so I would be missing out on a lot of stellar views. But I was so excited that the weather didn't dampen my spirits. I had done a lot of research on my drive and chosen carefully what I wanted to see. I was also driving clockwise around the ring in order to not get stuck behind tour buses! SMRT

First stop; Staigue Ring Fort. I pulled into the muddy parking lot after driving down a tiny one-lane road. There were only two other people as I pulled on my rain gear and dropped €1 in the honor box. 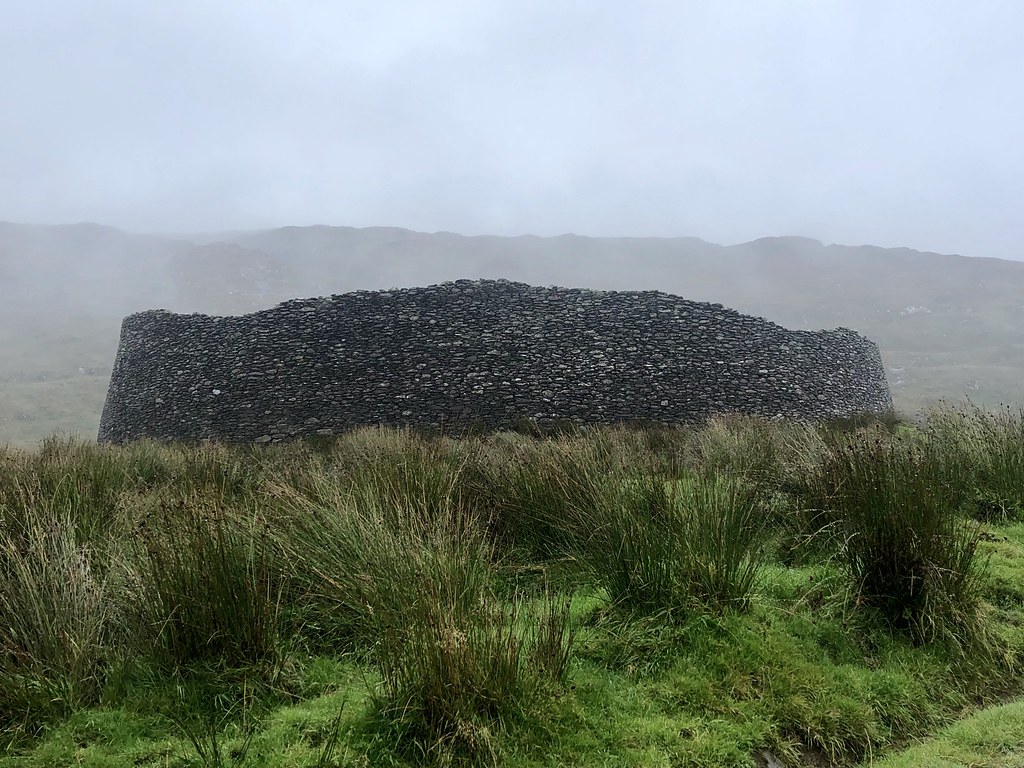 It's amazing how the ring fort has survived, having been built around 300 AD. And to have it almost to myself was a little eerie! 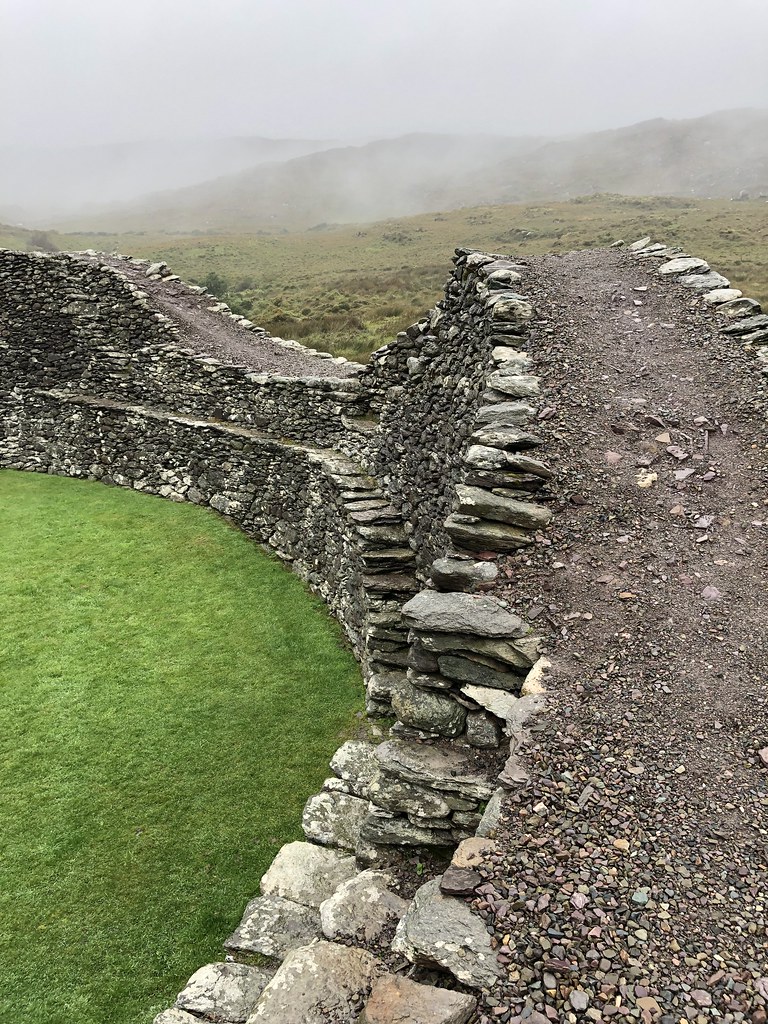 I climbed up and had a walk around. The actual reasons for forts are still mostly unknown. Were they defensive forts, ritual sites, or meeting areas? No one can say for sure.

As I drove away from the fort, I tailgated the SUV in front of me so that if there was car coming the other way they would have to back up for both of us. :)

The weather cleared just a bit as I pulled into Derrynane House. I didn't tour the inside of the house but walked around the grounds and out to the Ogham stone. As I had learned at the Book of Kells, these stones are found around the country, their markings were an alphabet so people could leave messages. 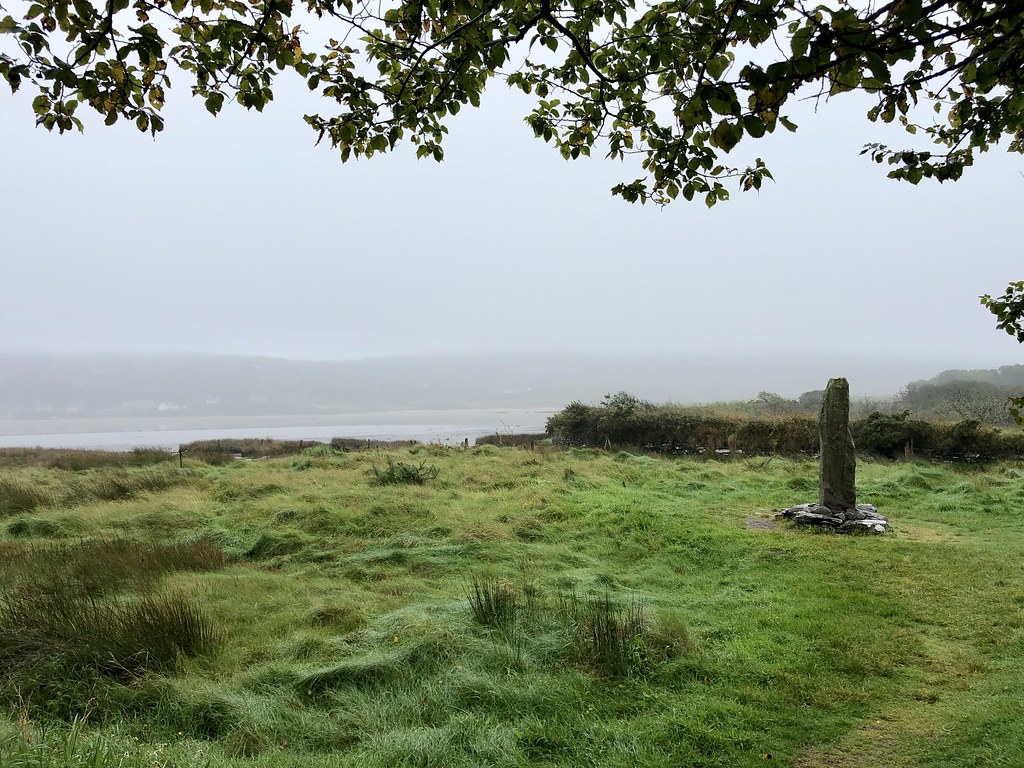 Back on the road I drove along Kenmare Bay and through the Coomakesta Pass. This entire area is suppose to have the most stunning views. I had to laugh at the "view" I was getting. 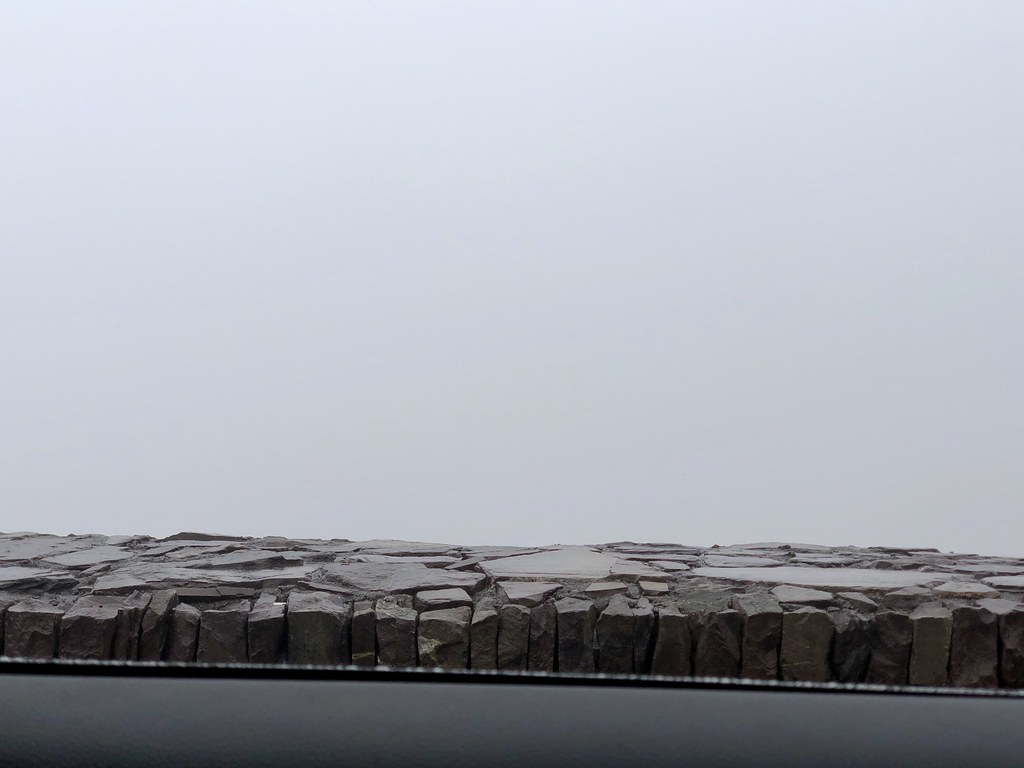 I turned off from N70 onto R567 and the Skellig Ring Loop. This road is too small for the tour buses so I wouldn't have to worry about giving the right of way. I had some nice views of St Finian's Bay and the beach below.
I pulled into the gravel lot for the Kerry Cliffs (which btw my Irish friends say this is 100% a made up name for tourism), paid some Euros and hiked out to the dramatic look outs. It was windy and rainy and the fog was coming in and out. And it was amazing! 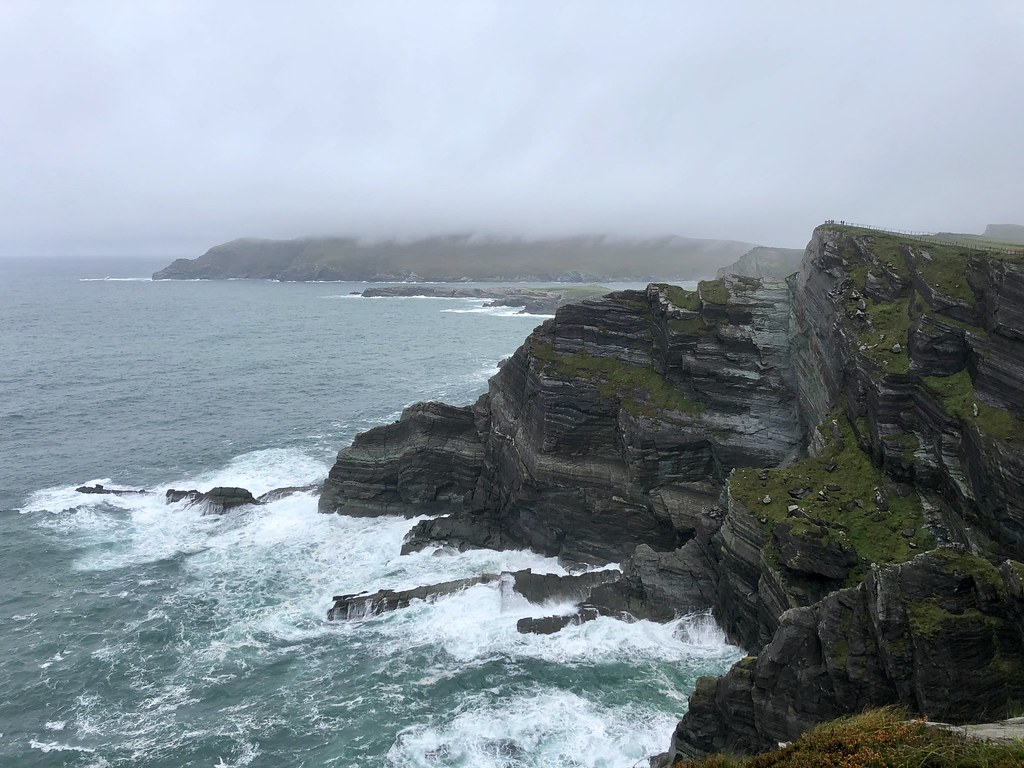 I stayed and hiked around for a while, I could see the islands of Little Skellig and Skellig Michael when the fog lifted, and could barely see the tip of the cliff I was on when it rolled back in. I loved it. 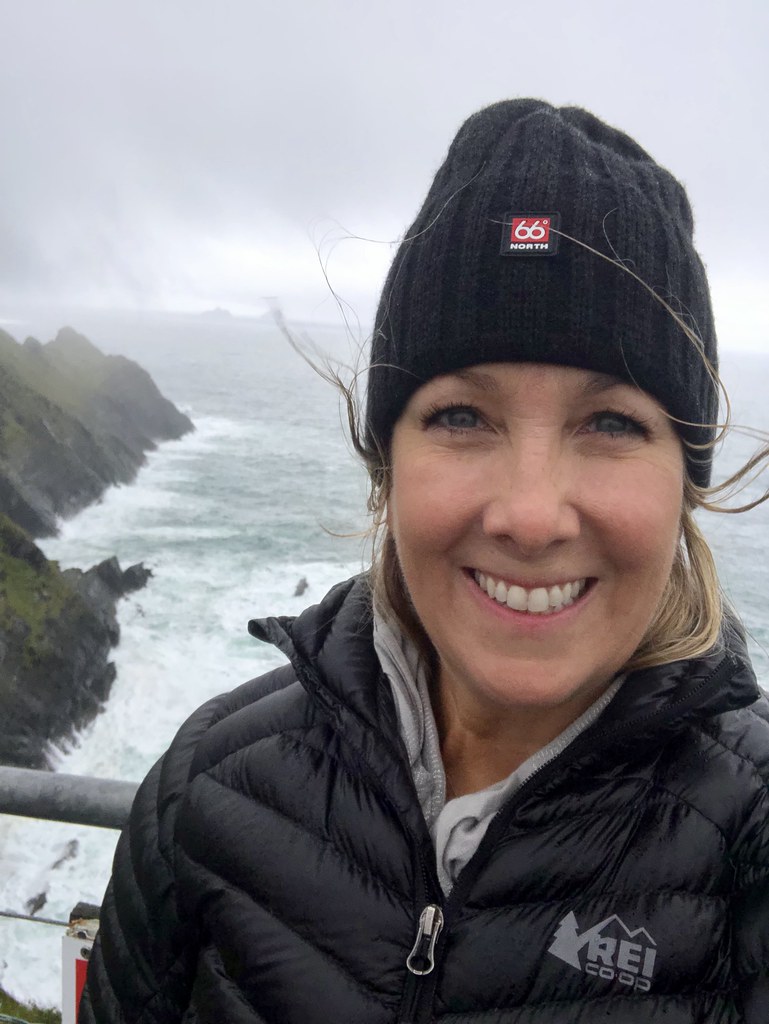 By 13:30 I arrived in the cute harbor town of Portmagee and was starving for lunch! The huge plate of fish and chips at The Moorings pub was exactly what was needed. I didn't walk around the town but from what I read I saw it all getting out of my car as the village has a population of just over 100! 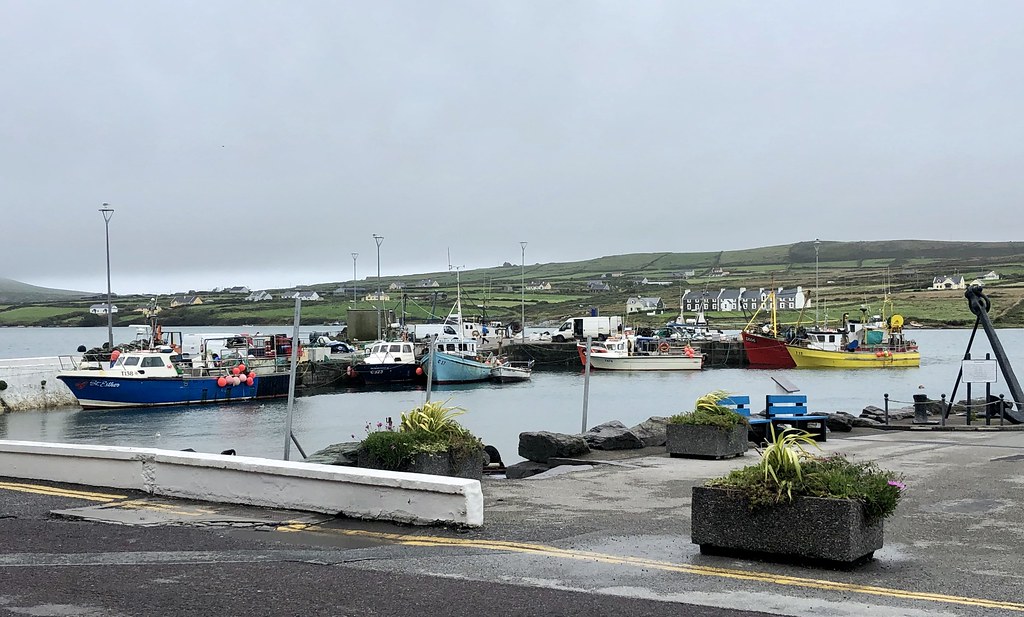 A few miles down the highway, at Knightstown, I boarded a tiny car ferry which took me across the water and back onto the N70 in Cahersiveen. There are two more ring forts out here, Cahergal and Leacanabuaile.
These two forts are about 200 yards apart and share a tiny parking lot. It was getting a bit late in the day so I chose to hike up the hill to Leacanabuaile which was believed to be a farmstead. It was quite a bit more elaborate in its structures than the simple circle at Staigue, and the views of the surrounded land and bay were gorgeous. 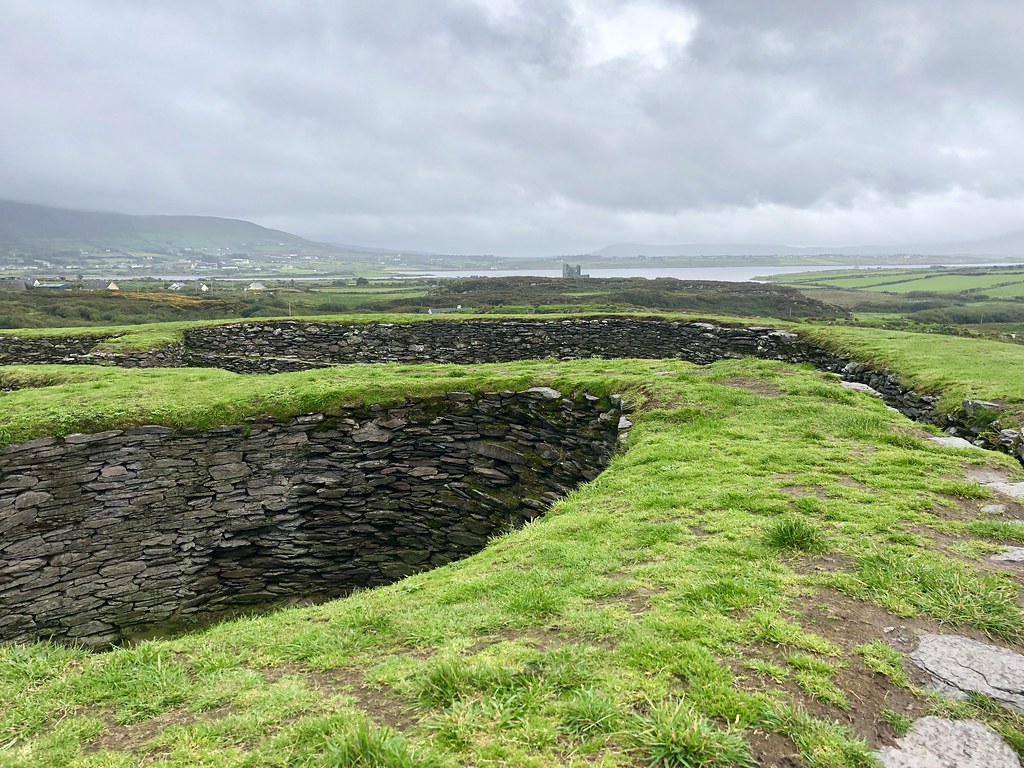 On my drive to the forts I had seen the ruins of an old stone castle off in the distance. I love shit like that. So after I checked out the fort I made my way to the ruins. Turns out it was one of the largest castles built in the area in the 15th century and was home to the McCarthy Clan. Very cool! 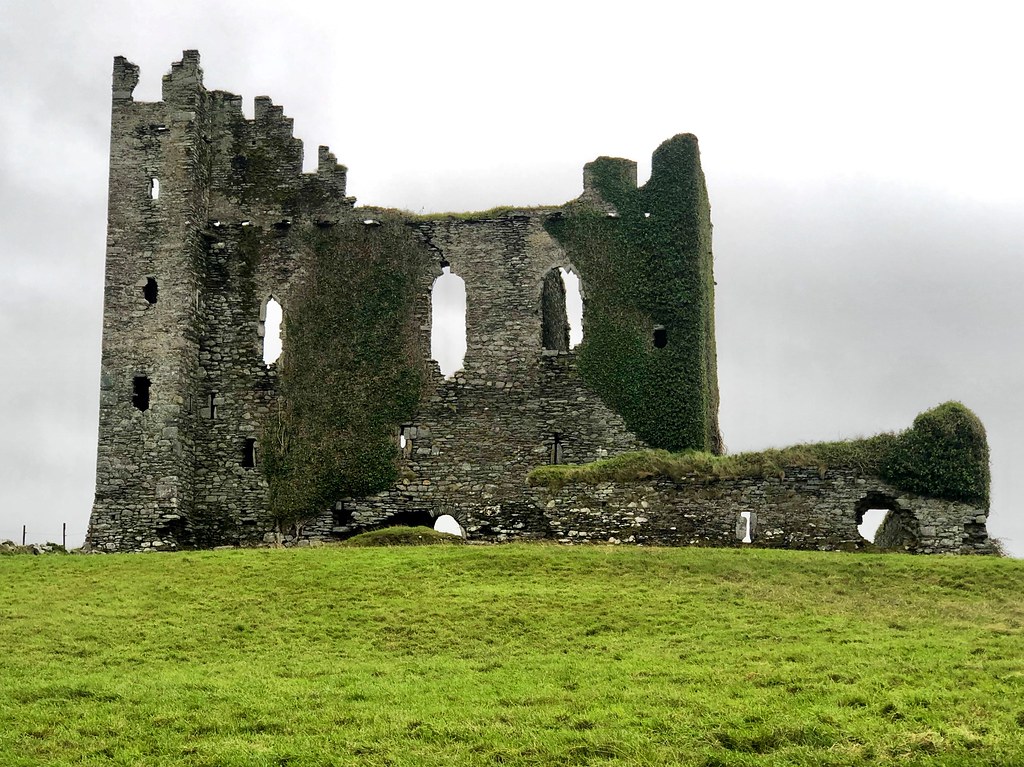 At Killorglin I ended my Ring of Kerry drive and headed west on the R561 past Inch beach and on to Dingle. I had been on the road for 7 hours and had seen a lot! And even though the weather hadn't exactly cooperated, I was very impressed with the beauty of the Irish countryside! 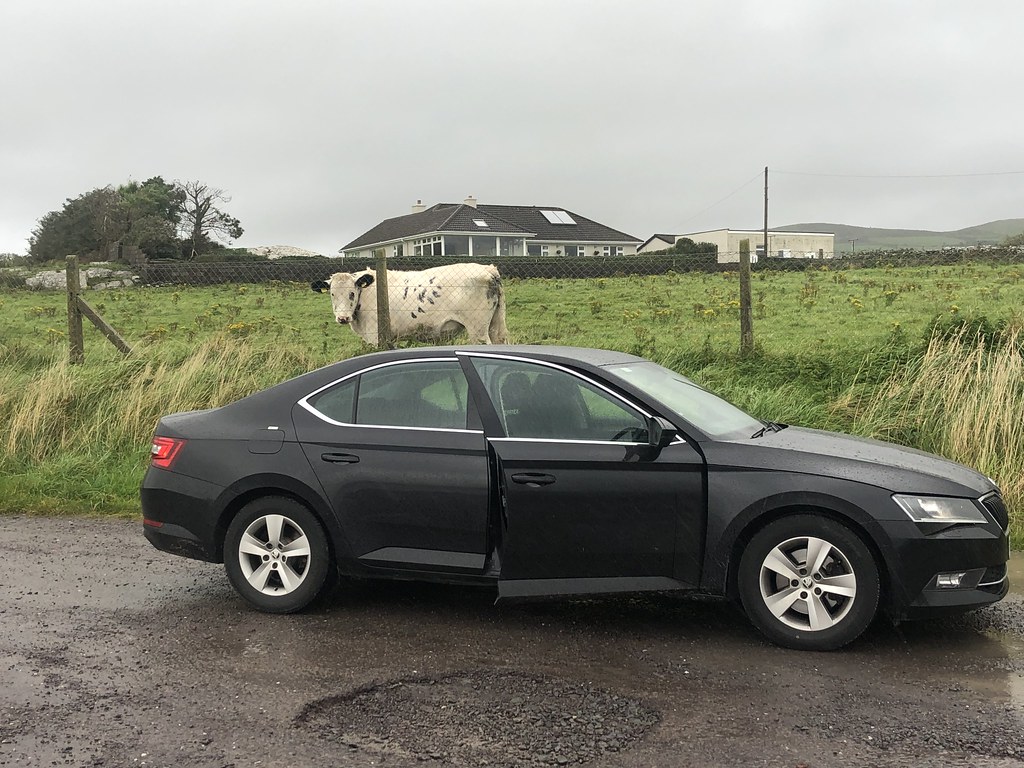 All photos of County Kerry here.