I was driving from The Rock of Cashel, to Kinsale, a small town on the harbor in County Cork. But first I had an appointment at the Jameson Distillery in Midleton. It was only an hour away so I had made a reservation for 2pm thinking that would give me time to arrive early and have lunch before my tour. Nope.

My map sent me to the working distillery (instead of the site where customers are welcomed). By the time I made it to the correct location I was late for my tour and the restaurant wasn't serving lunch any more. But the folks were great and got me a spot on the next tour so I relaxed with a beer for a few. 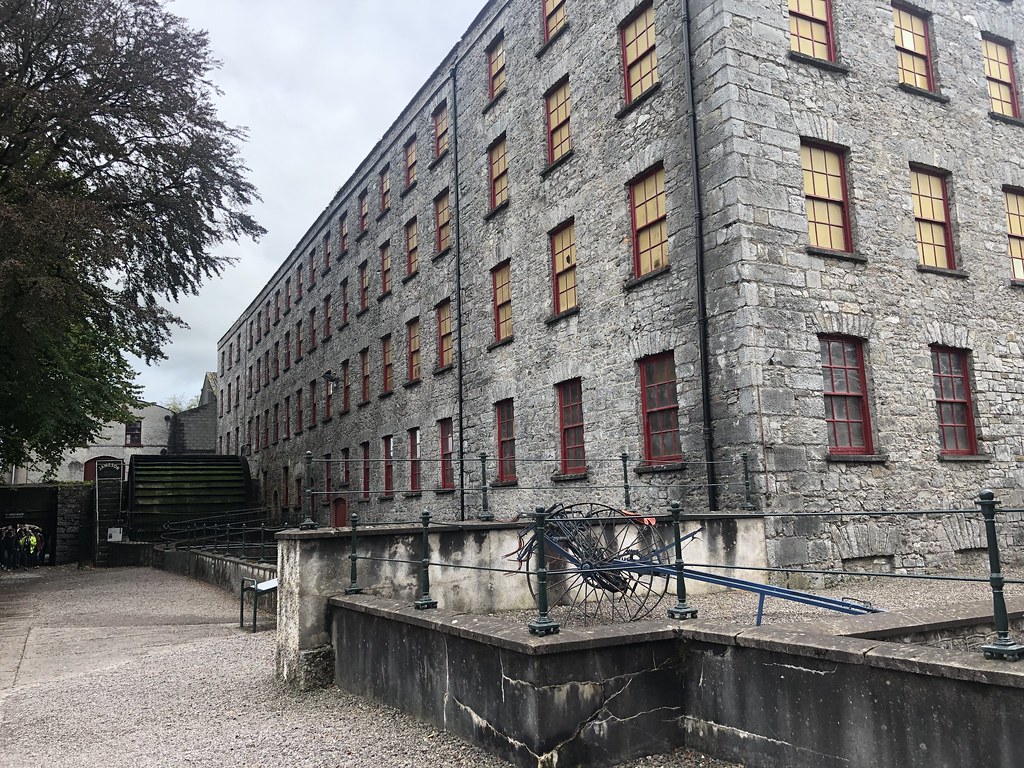 Whiskey has been made on this site, the grounds of the old Midleton Distillery, since 1825. Jameson moved in from Dublin in 1975 and built new facilities to accommodate their expanding offerings; Powers and Redbreast are among the other brands made here. 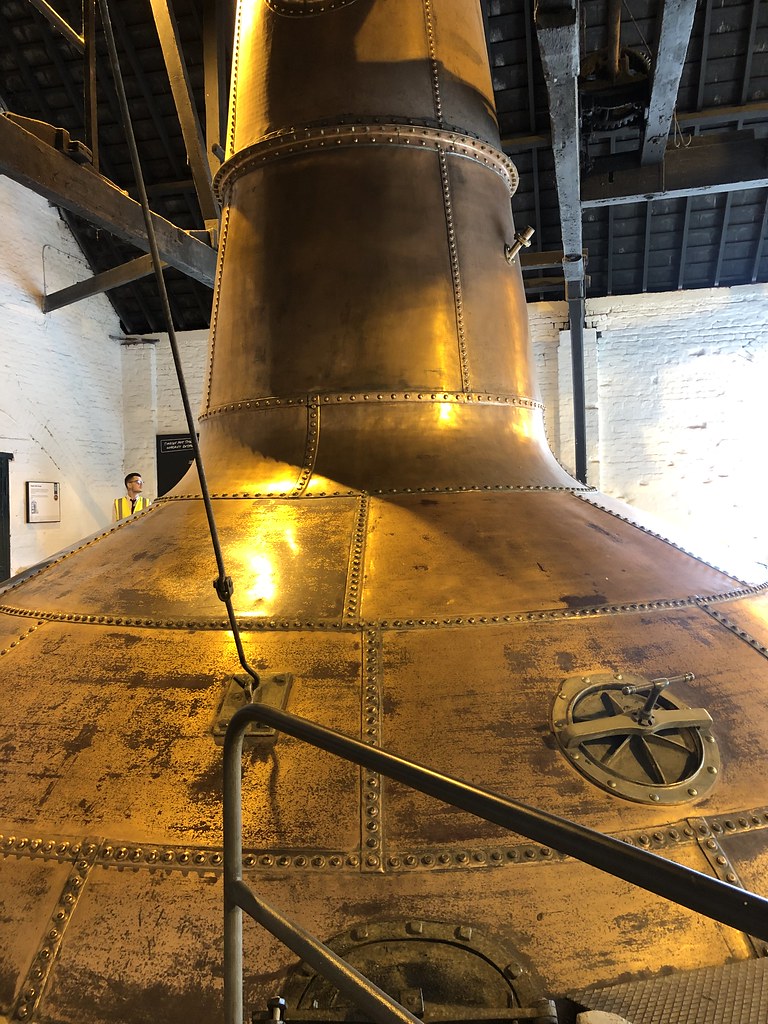 Besides making the world's most purchased whiskey, the distillery also boasts the world's largest pot still built in 1825!

The tour was fun with lots of history and also a blind tasting of Scotch, American whiskey, and Jameson. At the end we were led back to the bar and given a choice of whiskey cocktails. I had signed up for the Premier Tasting so was told to wait until someone came to lead me to a private office. Seems I was the only one who had signed up for this tasting so had the whiskey expert, and pours of Jameson Black Barrel, Redbreast 12 Year Old, Powers John's Lane Release and Midleton Very Rare all to myself! 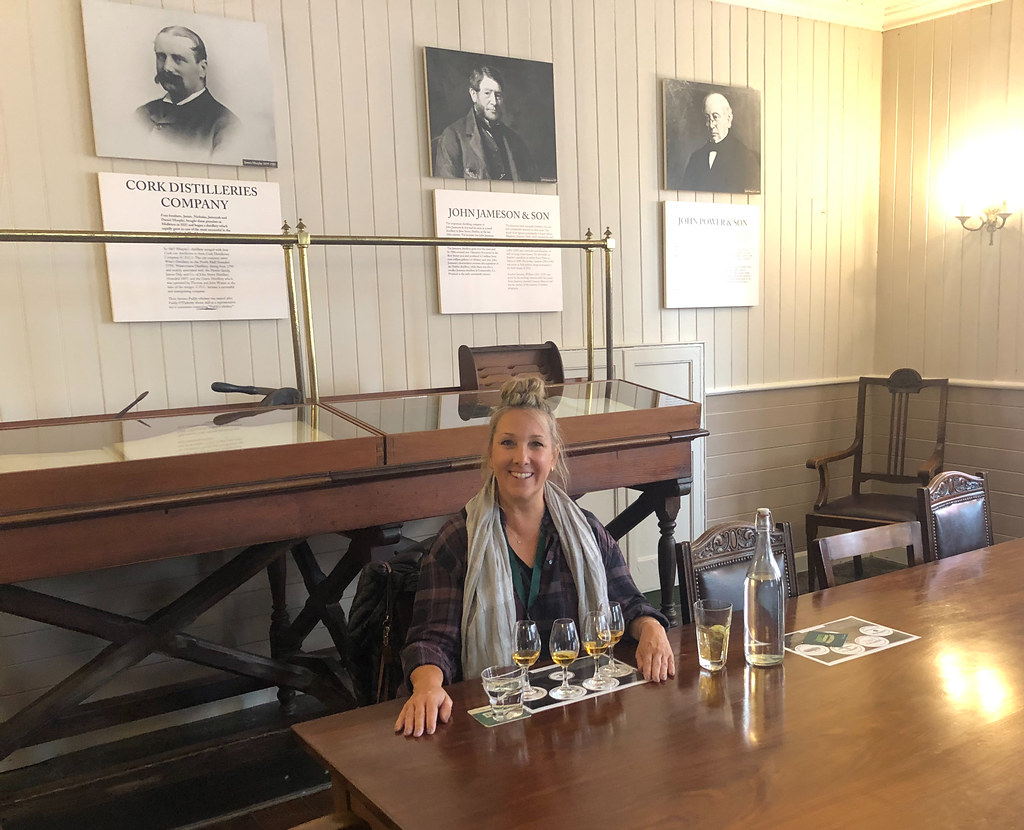 I did a little shopping in their bottle and gift shop and then continued on to Kinsale, my home for the next two nights.
Kinsale is absolutely charming and I was so happy I had decided to stay here instead of the bigger city of Cork. I found the large public parking lot and right across the street from Pier House B&B (thanks for the fantastic recommendation Natalie B!) 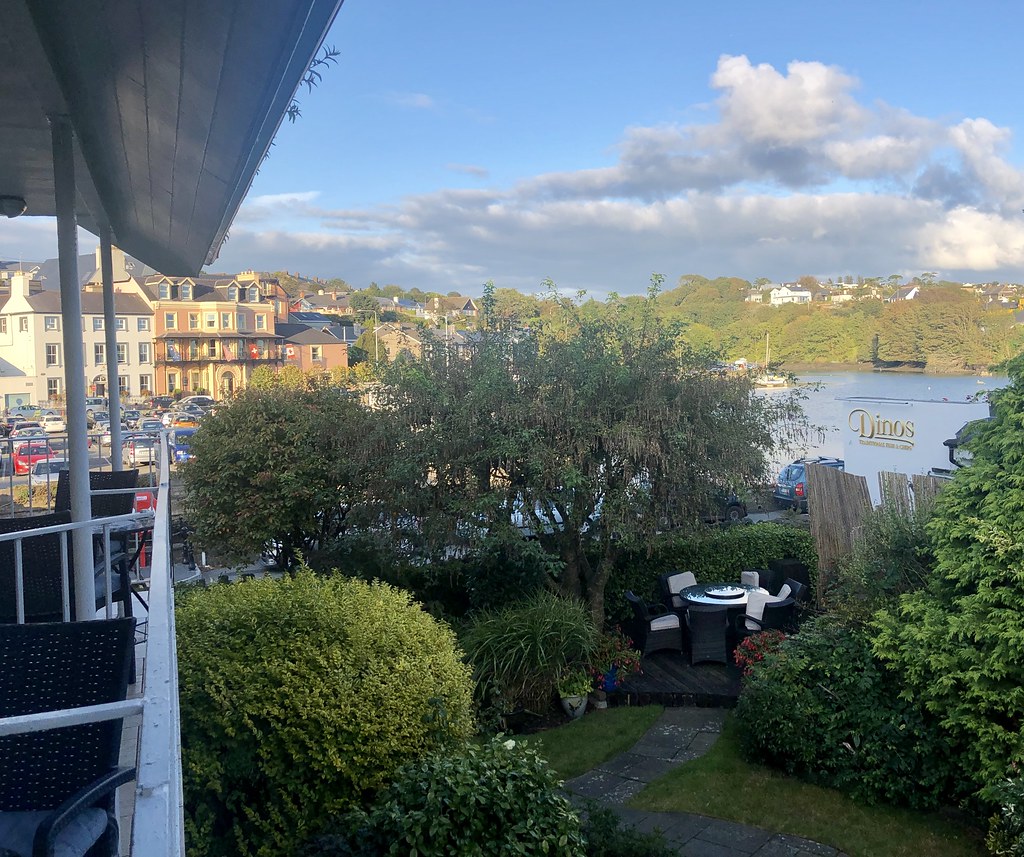 My room was lovely and had a little deck and view of the water. I was starving since I hadn't had lunch, so made my way to the very popular Fishy Fishy for an early dinner of fish and chips. 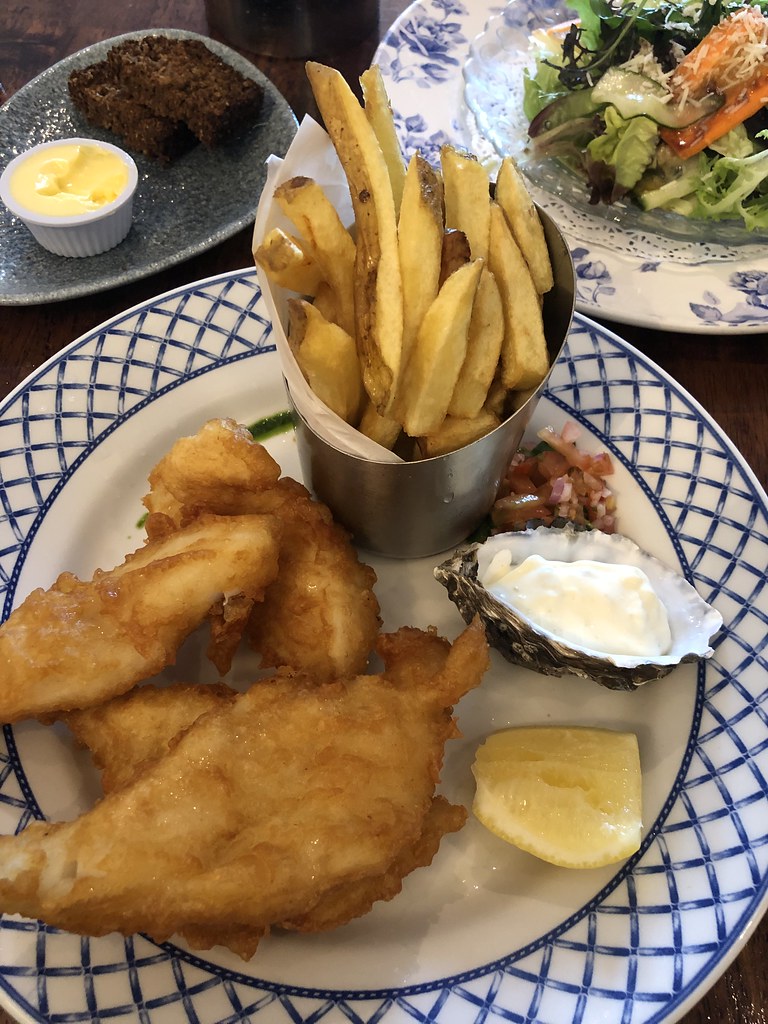 The weather was great for a nice walk around town after dinner before heading into Kitty O'Shea's for some traditional music. The bar was quite fun, even if it was about ½ Americans and ½ locals. Even that was fine until someone next to me started talking politics...
The next morning I had a lovely table in the breakfast room at my BnB and met the owner Anne (her daughter had helped me out the day before). I ordered the small Irish breakfast of fried egg, black pudding, bacon, sausage and tomato. So filling! 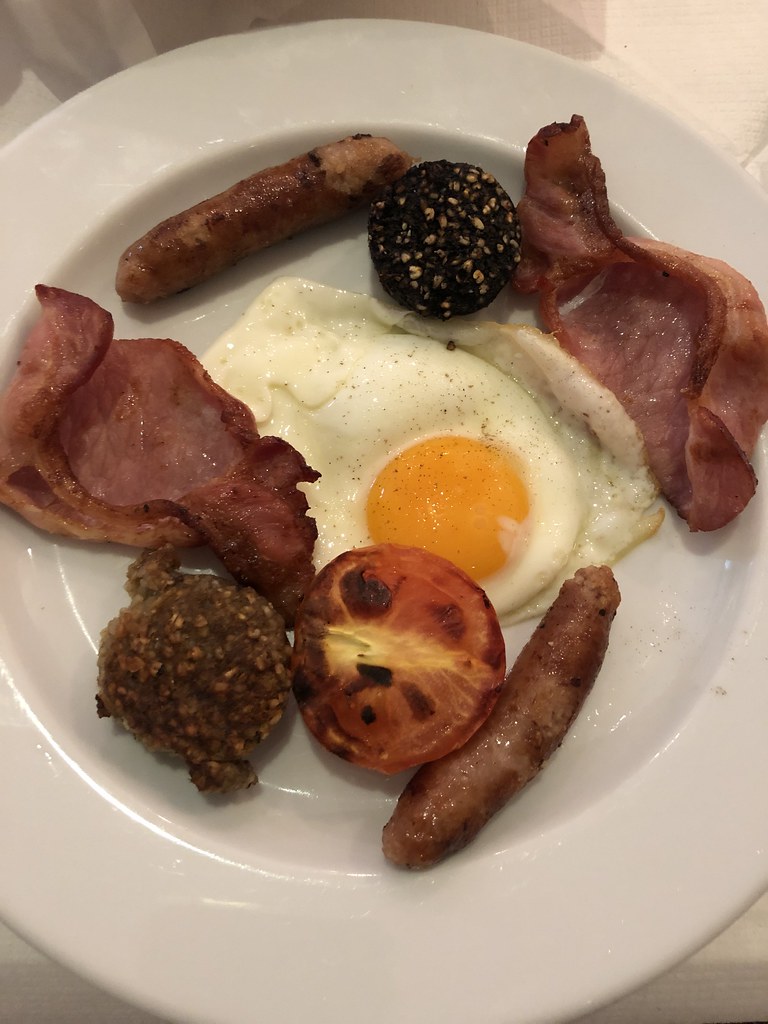 My day was pretty full so I got going right after breakfast. The city of Cork was just over 30 minutes away. It was busting down rain the entire drive and once I arrived I found the city much bigger and with more traffic than I had expected, not the best first impression! I made my way to a parking garage (narrowest spaces ever!) and started walking towards the the English Market. Even in the rain I could see that the city was basically an ad for Ireland. Wet cobblestones, flower and ivy covered brick walls, colorful hanging shop signs. Ok Cork, we're good! 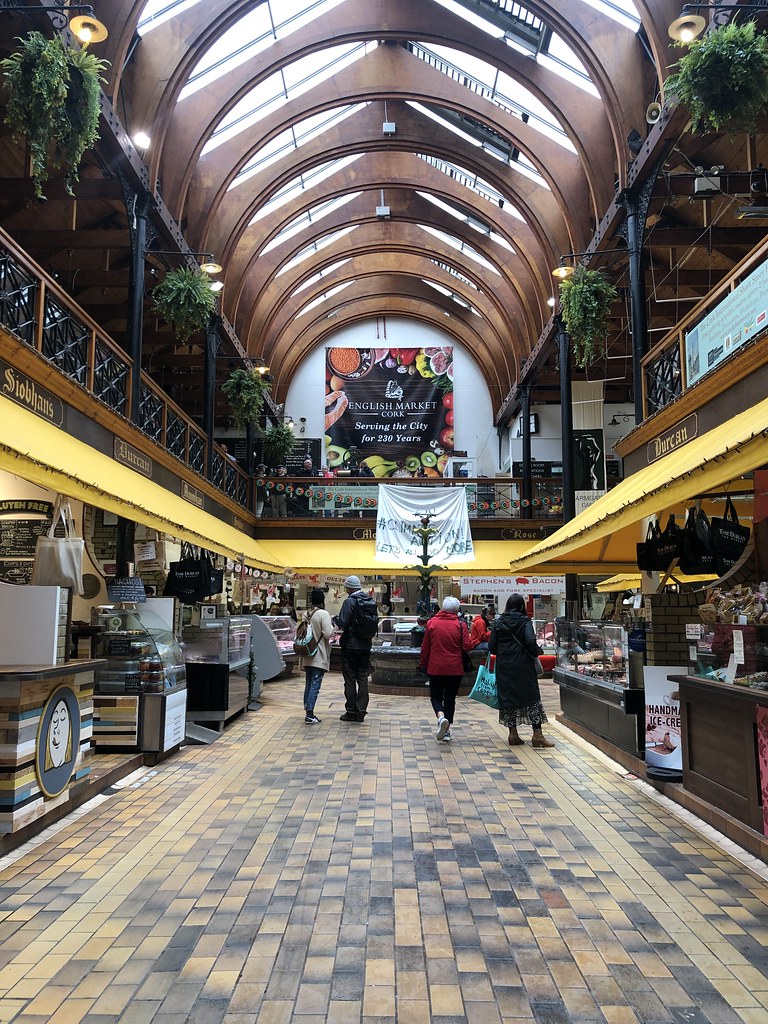 I've never met a market I didn't like and the English Market was no exception. I love how the more I travel the more I recognize things (that would still be quite foreign to most Americans). But there are always new things waiting to be discovered! 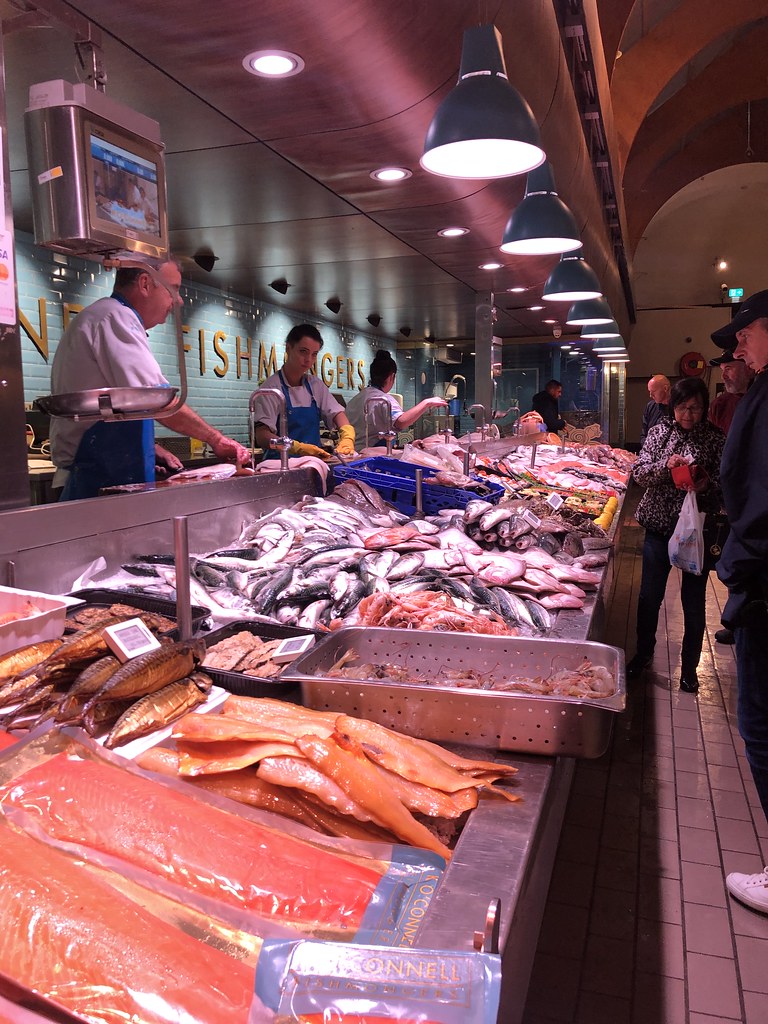 There was a case with the region's favorite Clonakilty black pudding in it (the same one my BnB was serving) and also an amazing selection of seafood that was being prepped under a continuous stream of water. It's a small market and doesn't take much time to wander around;  the vendors each have their specialties proudly on display and not all of them appreciated me taking photos (I'm talking about you Stephen's Bacon!)
Upstairs is the Farmgate Cafe which is known for their use ingredients from the market vendors. I had a really excellent fish chowder with soda bread, the perfect warming lunch for the blustery day! 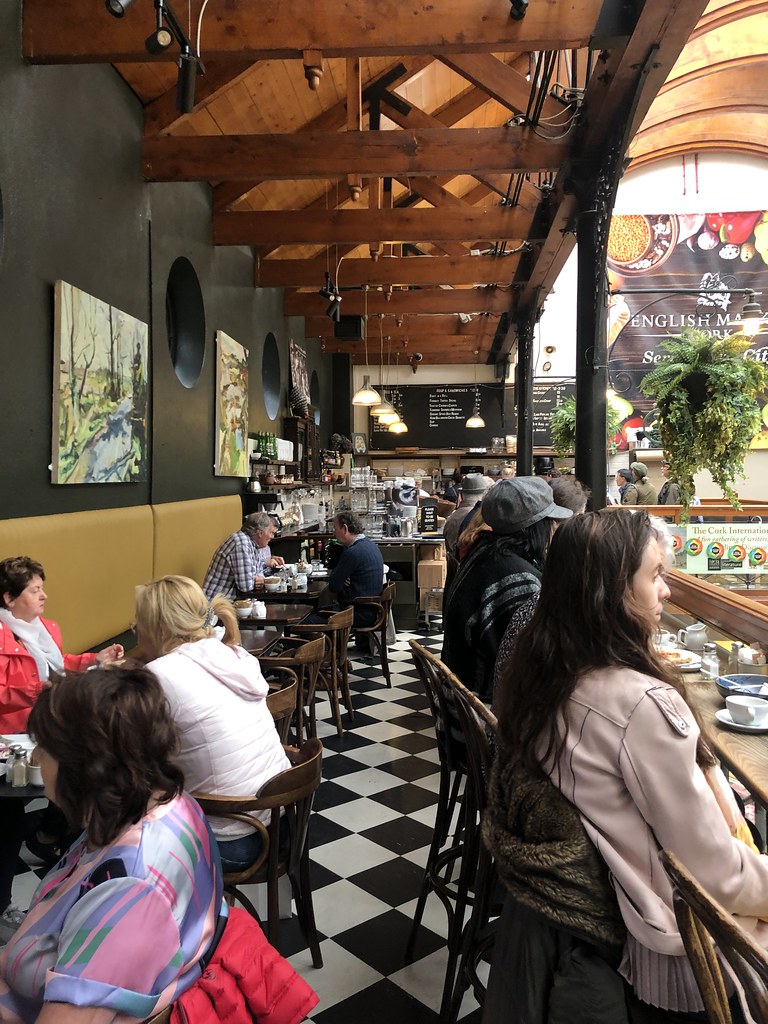 The rain let up as I was leaving town, just long enough for me to park and take a quick walk along the River Lee. It really is a pretty town, especially down around the river with its series of bridges. 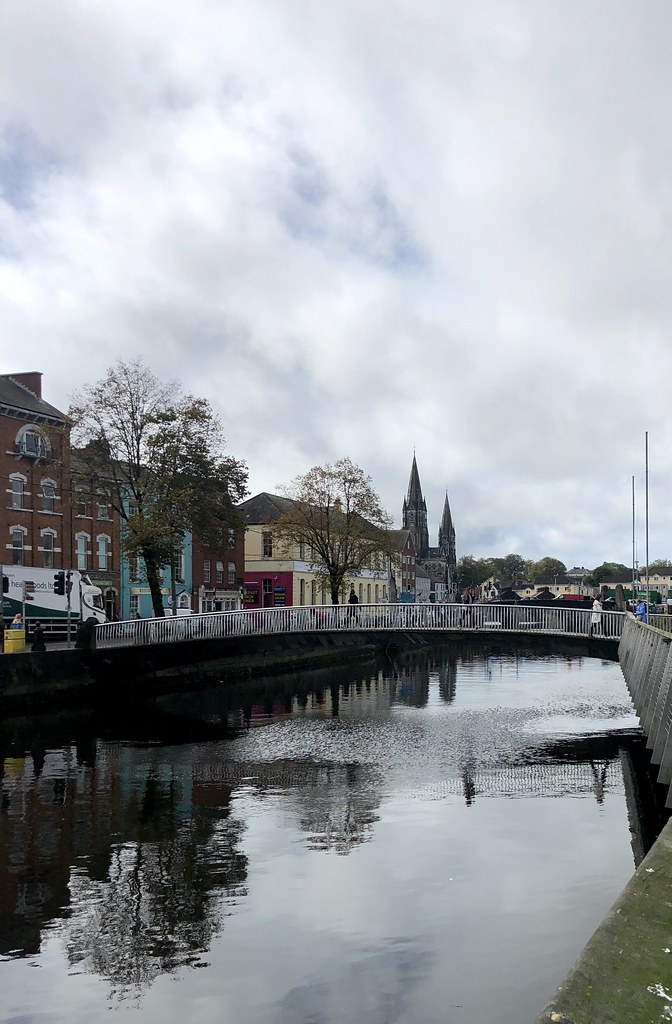 It was another 30 minute drive to my next stop, Cobh which sits on Cork Harbor. St. Colman's Cathedral sits at the top of the hill, looking out over the town and the sea below. It's an impressive sight both inside and out. I was able to park just down the street and took some time to explore. I thought the cathedral was awesome! 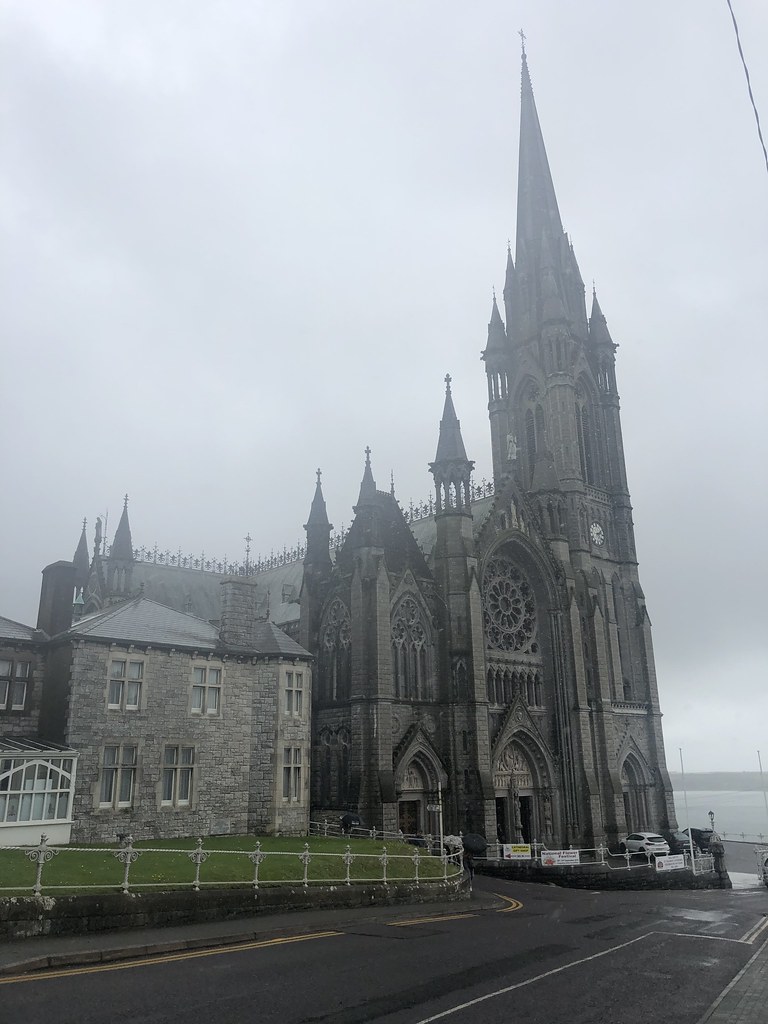 Across the street is a row of cute colorful houses which the locals refer to as the Deck of Cards. It's all very pretty even in scattered showers! 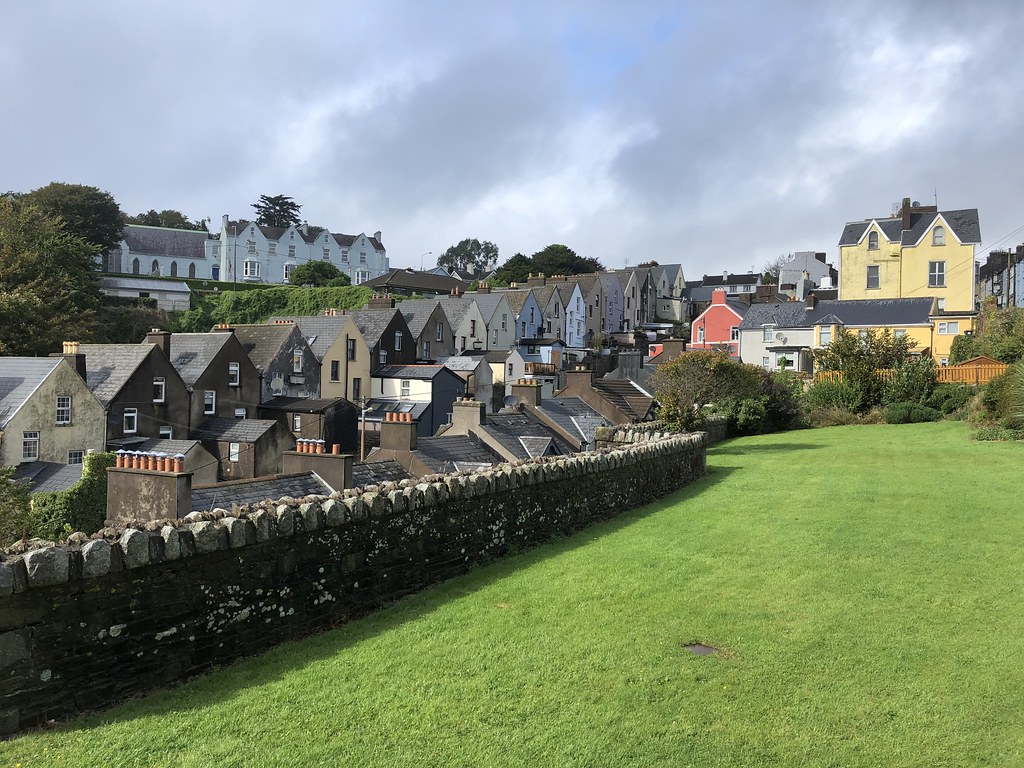 For a town of just ~13,000 Cobh has a lot of history. Many Irish-Americans would tell you that there family is from County Cork, but as Cobh was the launching place for over 6 million emigrants County Cork was listed by default if they didn't write in their county of residence. 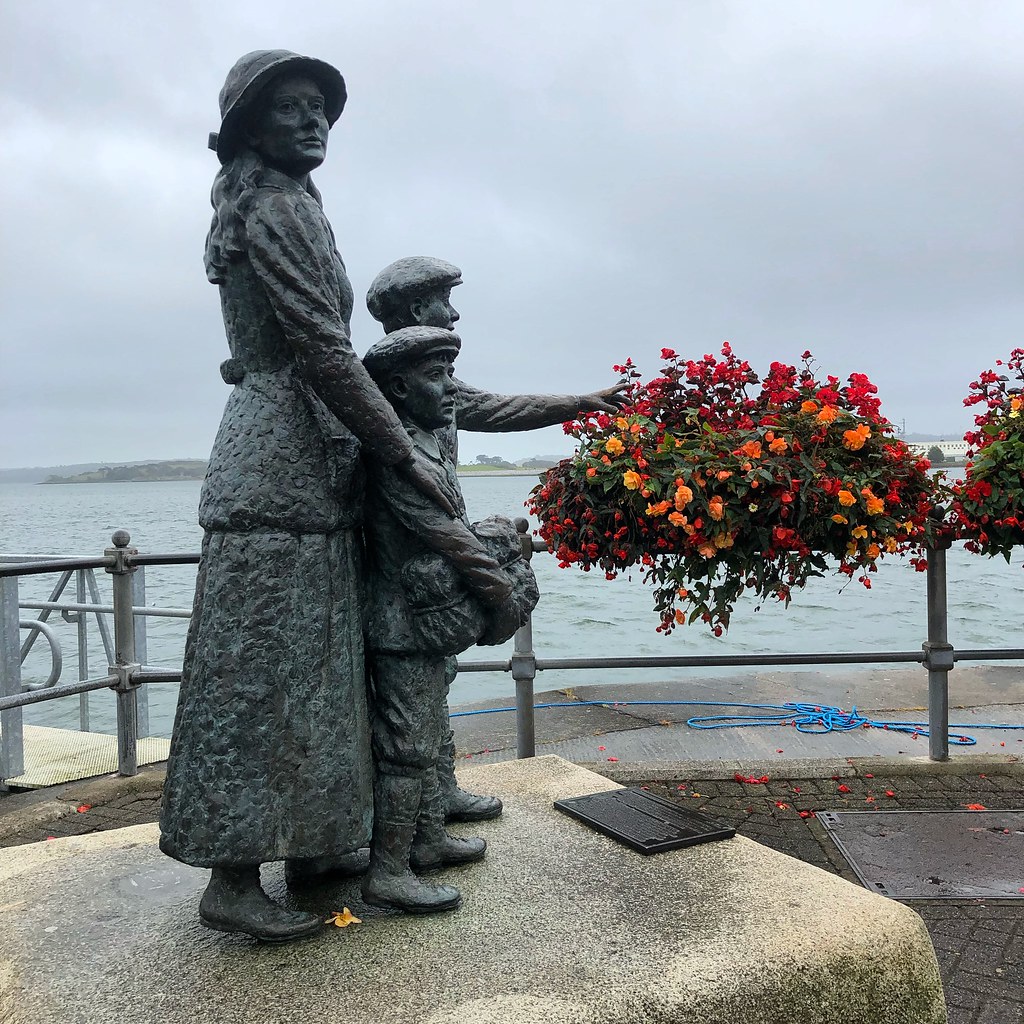 Additionally Cobh was the last stop the Titanic made before heading towards America, and ultimately sinking. The town went by Queenstown at the time and didn't change it back until 1922.

At the Cobh Heritage Center I spent the next 45 minutes going thru the exhibits documenting the Irish emigration, including the story of Annie Moore, the first emigrant to go thru Ellis Island. There are also stories of the Australian bound prison ships, or coffin ships as they were called. 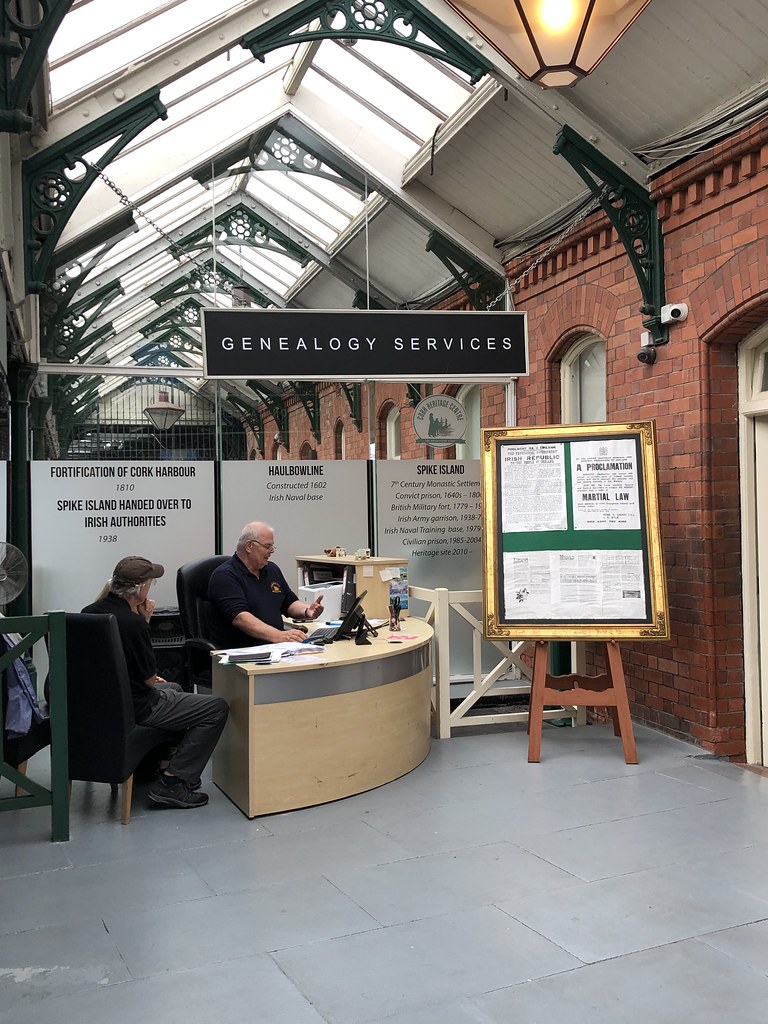 I had made a reservation in advance for €50 to meet with Christy Keating, Resident Genealogist at the center. I  had learned fairly recently that my family on my father's side came from Ireland, County Tipperary. Christy and I sat for almost an hour researching my family. He found the properties that my ancestors owned, and signed records of their tax payments. As my ancestral grandfather came to America in the late 1700's there aren't any records of his passage but it was really cool to find these other records.
If you are going to be in the area and already have a bit of info on your Irish roots, I highly recommend this! 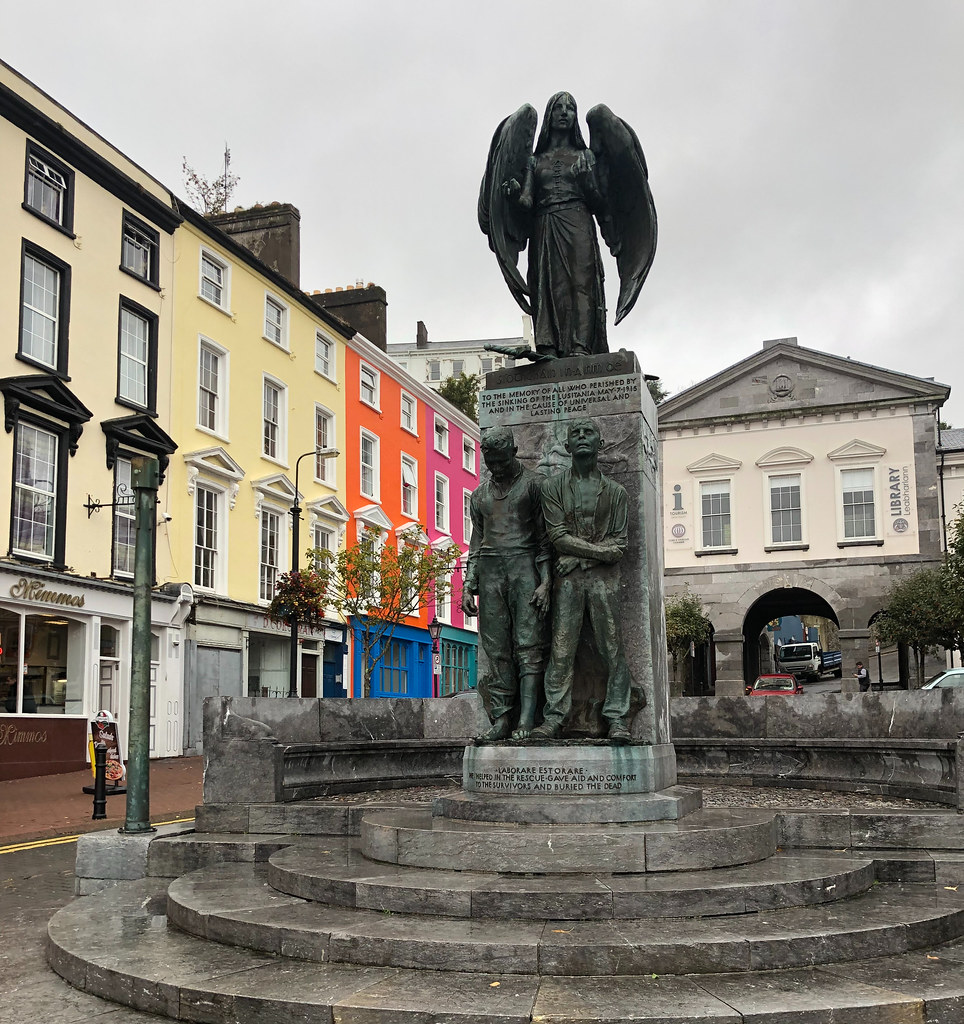 On the way out of town I stopped at the memorial to the Lusitania, which was bombed off the coast near Kinsale. The marker sits across the street from the original White Star Line office, the company who built the Titanic.

That was a long but super interesting day. Back in Kinsale I headed to local favorite Dalton's Bar for a pint while I read more about the history of Kinsale and Cobh. Dalton's is a sweet spot with a cozy fireplace, a dogleg room with tables, and super friendly staff. 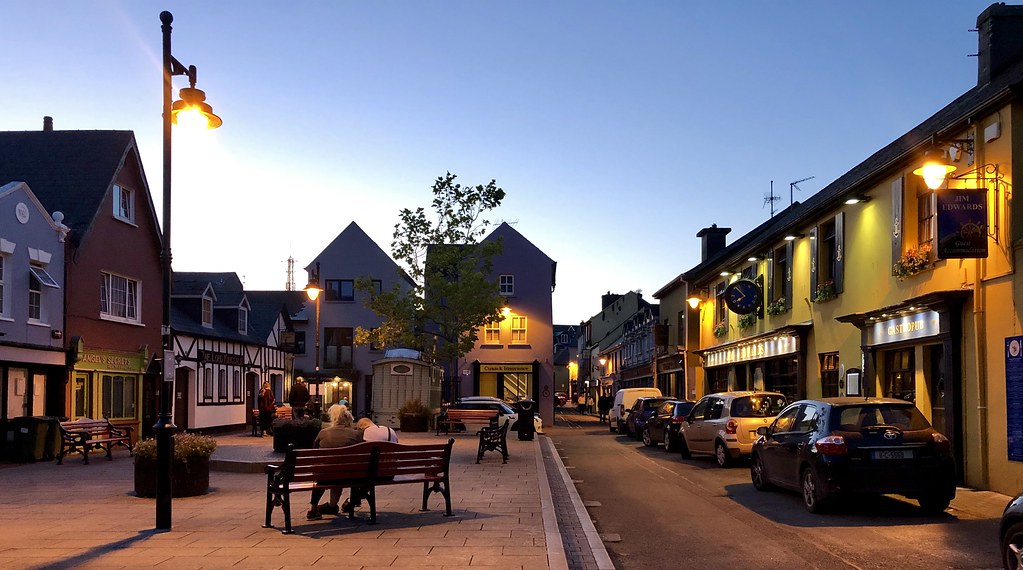 After learning that the band that was going to be playing that night was very good and very popular I went for a quick dinner around the corner at Jim Edwards. I ate in the pub side as I wanted to get back for the trad session, dinner was fine but nothing to go out of your way for.

Back at Dalton's the place was packed! One of the locals, Heather, had saved me a seat at her table. Later we were joined by some English guys who had grown up in Kinsale and were back visiting. It was such a fun night of music, hanging out with the locals, rounds of Murphy's (County Cork's local stout) and Jameson backs. I felt properly introduced to pub culture and most likely was a little wobbly when I went home at closing time! 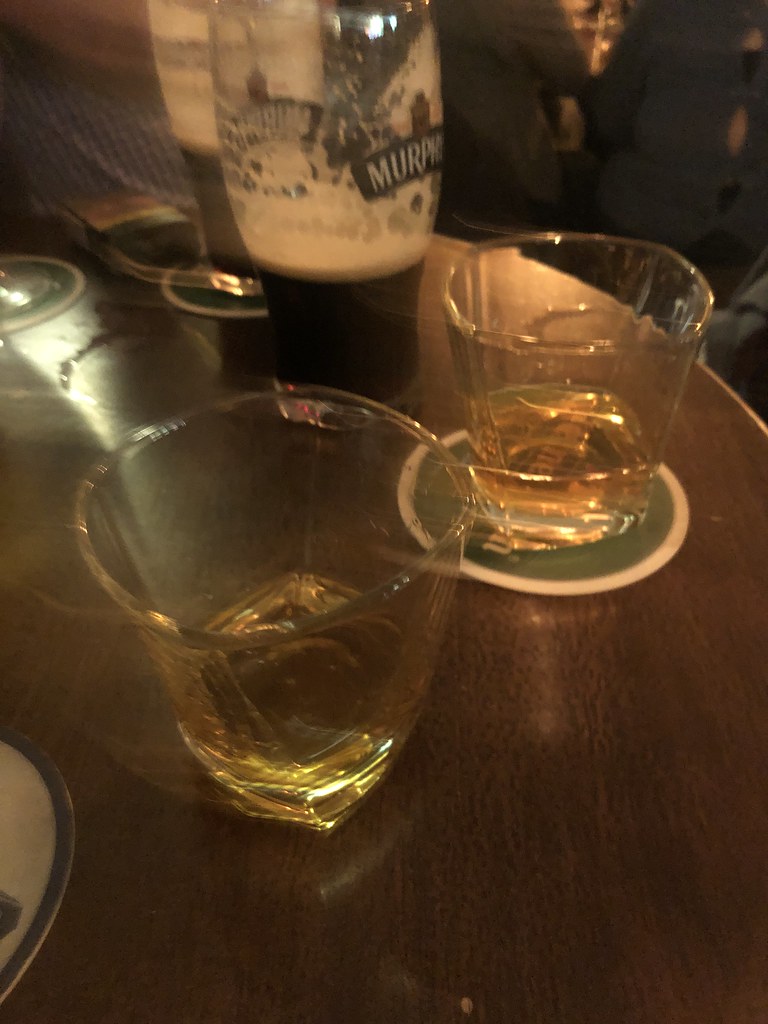 If you ever are in Kinsale please have a pint or three for me at Dalton's. 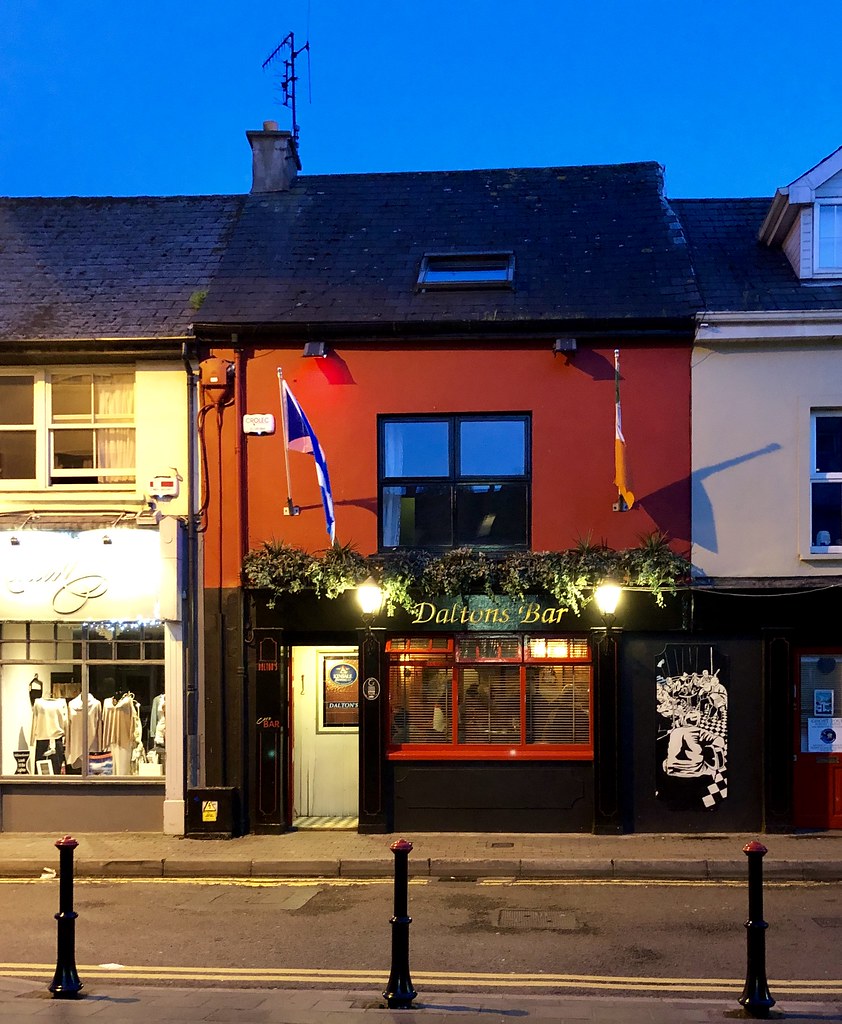 The next morning I checked out of the Pier House after having a delicious breakfast of smoked salmon and scrambled eggs. It was absolutely dumping buckets of rain as I was on my way to County Kerry!

All photos from County Cork here.