I was back in Ireland, after a quick side trip to the North, and at the Dublin airport picking up my car rental. I've driven on the "wrong" side of the road before (and without incident!) but it's still a bit nerve wracking. So I set off slow and made my way south on the M9. It was day one of a 14-day road trip (the longest I've ever done) around most of Ireland. And the first 12-days were all on my own! 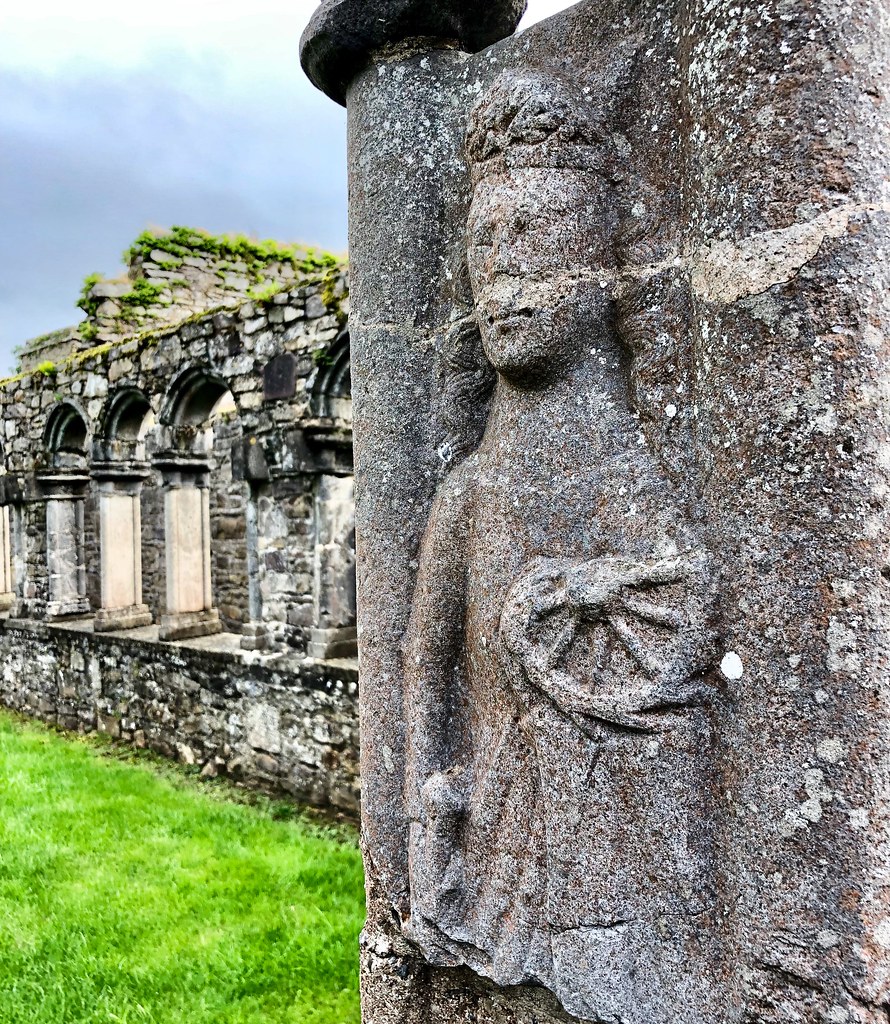 My first destination, Jerpoint Abbey, was 1 ½ hours away according to the map. But narrow country roads and a brief rain squall made it closer to 2 hours. I paid my €5 and set off to explore the medieval abbey once run by the Order of Cistercians. 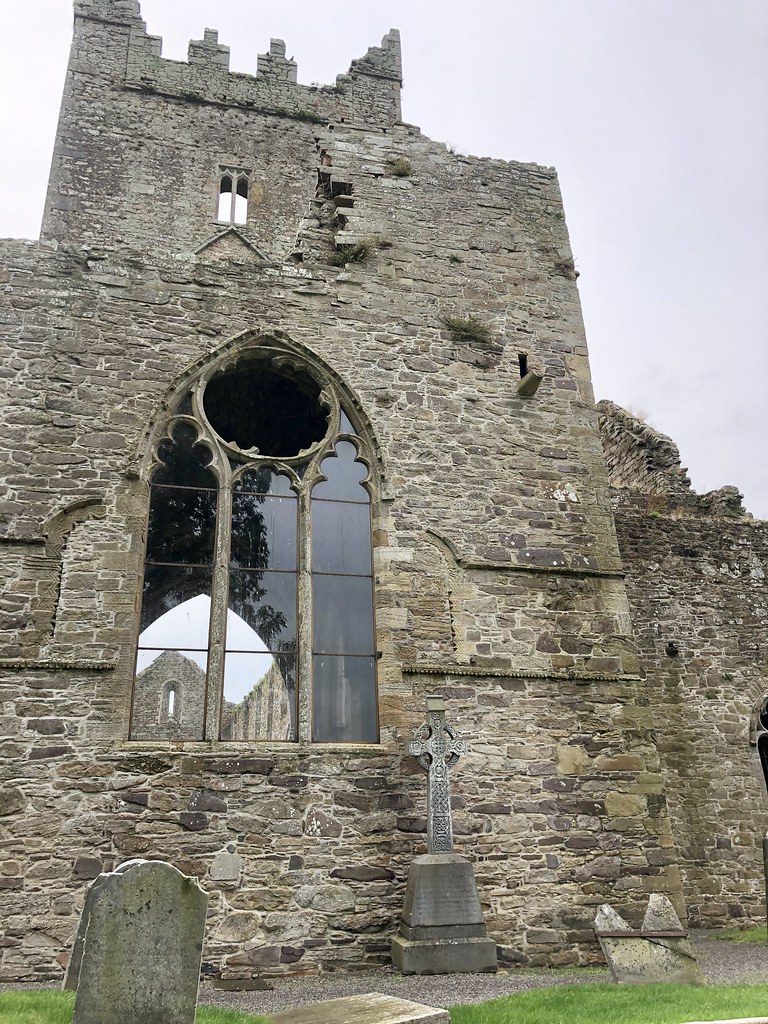 Built in 1180 the abbey is known for its gorgeous stone carvings. As there were only two other people wandering the grounds, my visit felt very special. A great first stop on my epic road trip! 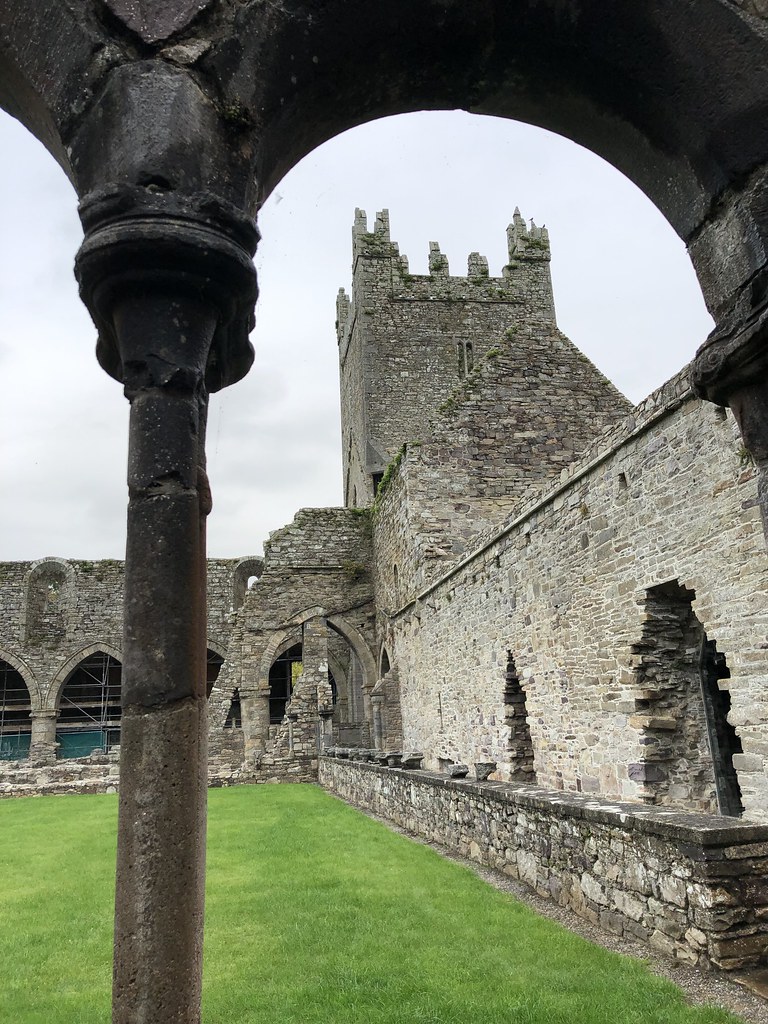 The monks of the abbey were very strict and devout followers Christianity. They upheld their beliefs, and for 350 years strongly encouraged others to join them. It wasn't until the creation of the Church of England that the land the monastery is on was awarded to the king and the buildings were made inhabitable. 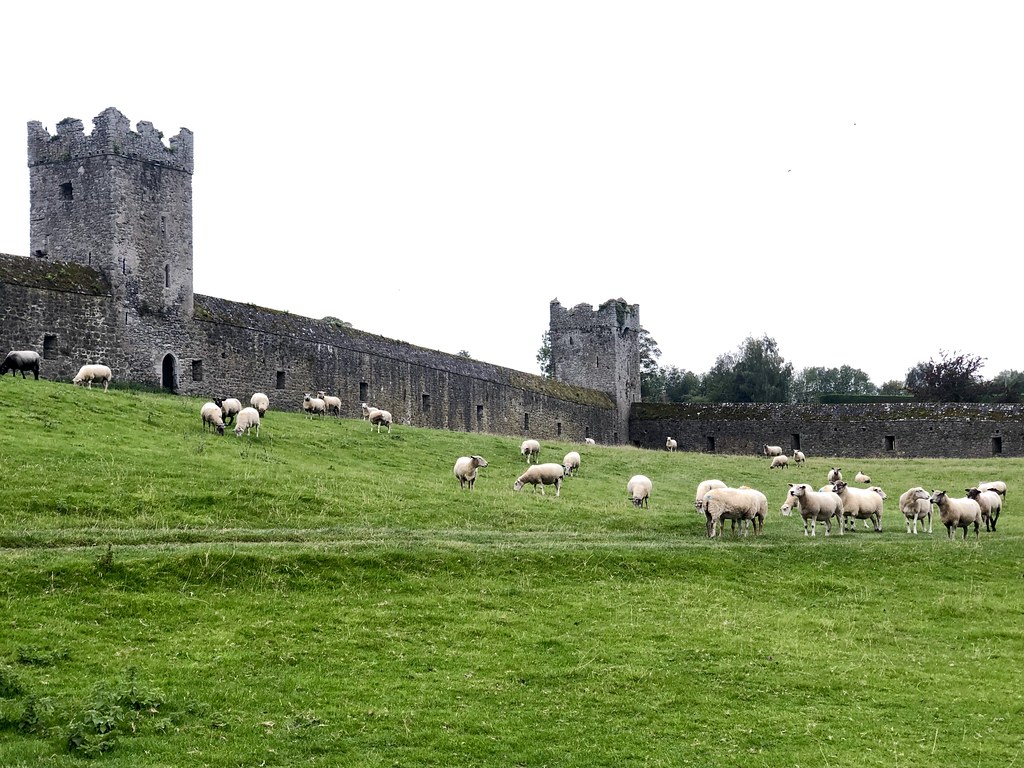 Just 10-minutes down the road I arrived at my next stop, Kells Priory. This is the largest enclosed monastic set of structures in Ireland. The buildings cover about 3 acres and is free to wander through. There are a couple of different entrances, I first stopped at the main parking lot just south of the ruins. 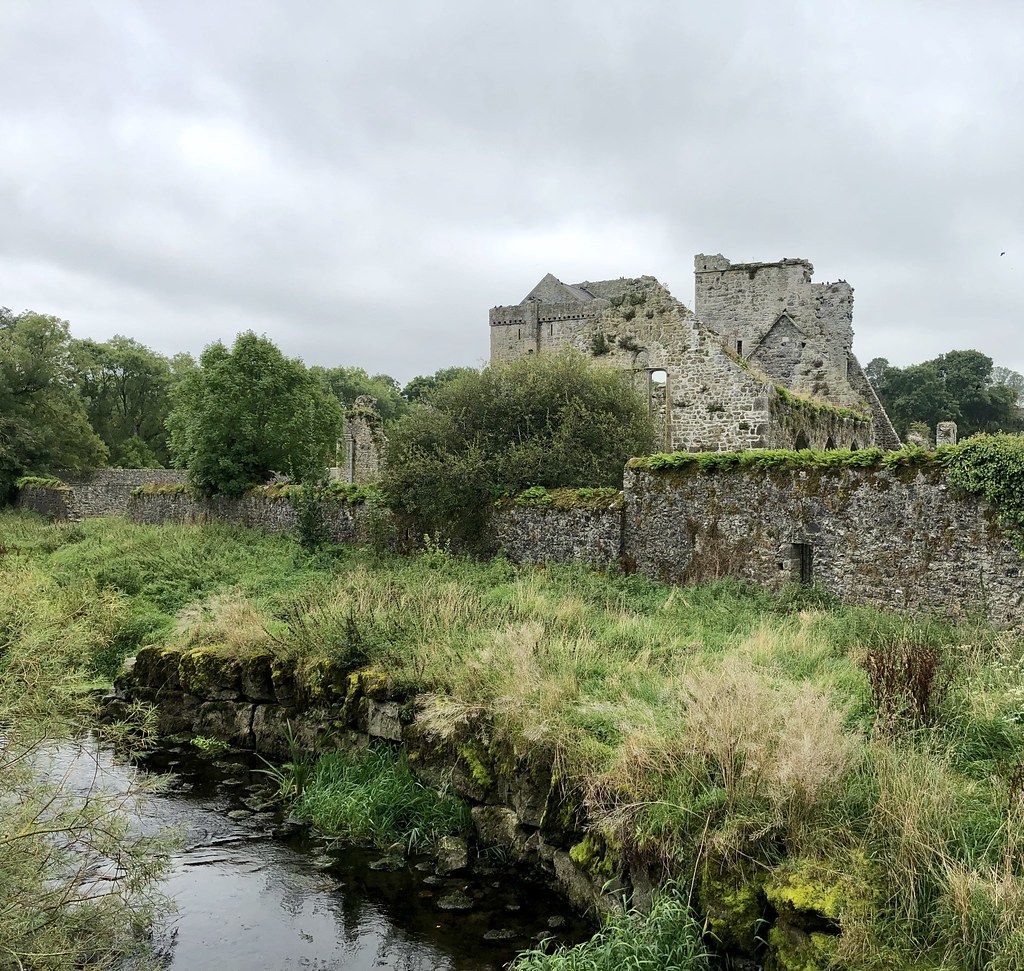 If you then drive north, across a quintessential Irish stone bridge, you can find your way to an abandoned mill. The walk from here is gorgeous, past the old water wheel, and again there were only a few other people wandering about. 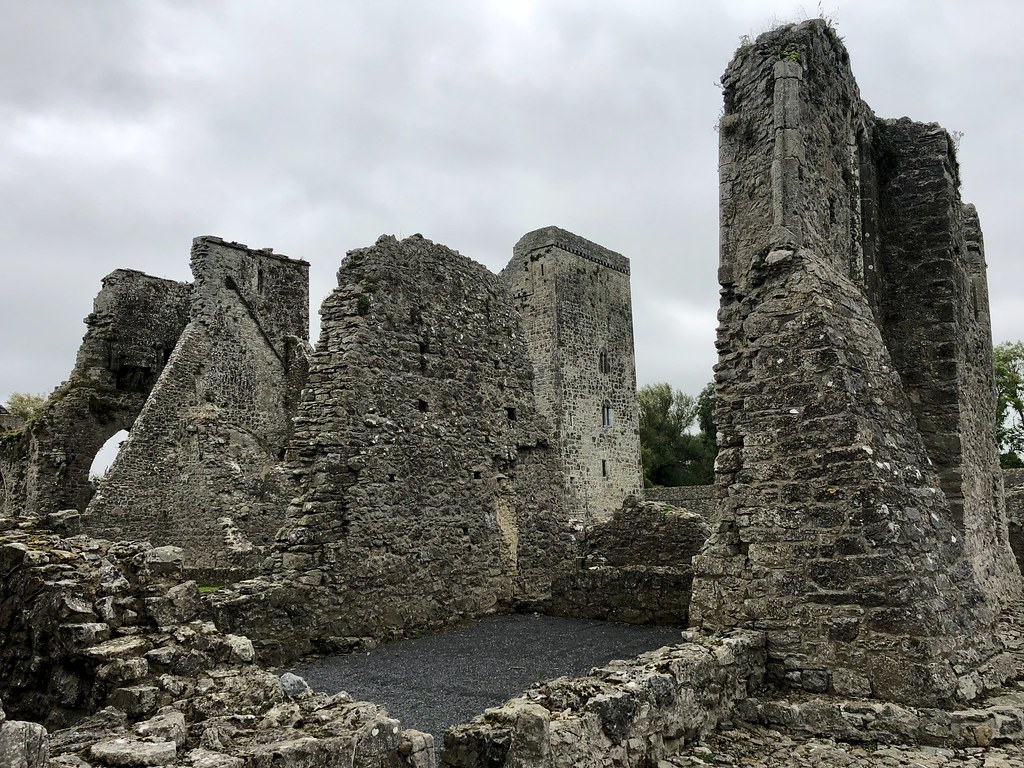 Founded in 1193, the priory and its seven towers were of the Augustinian monk order. There are ruins of the church, cellars, graveyard, etc. There are also a lot of sheep! It's a beautiful and peaceful area to explore but I was very happy to be wearing my Hunters through the fields. Highly recommend these boots for this type of trip!

I spent about 40 minutes here before returning to my car and heading to my evening destination of Kilkenny. 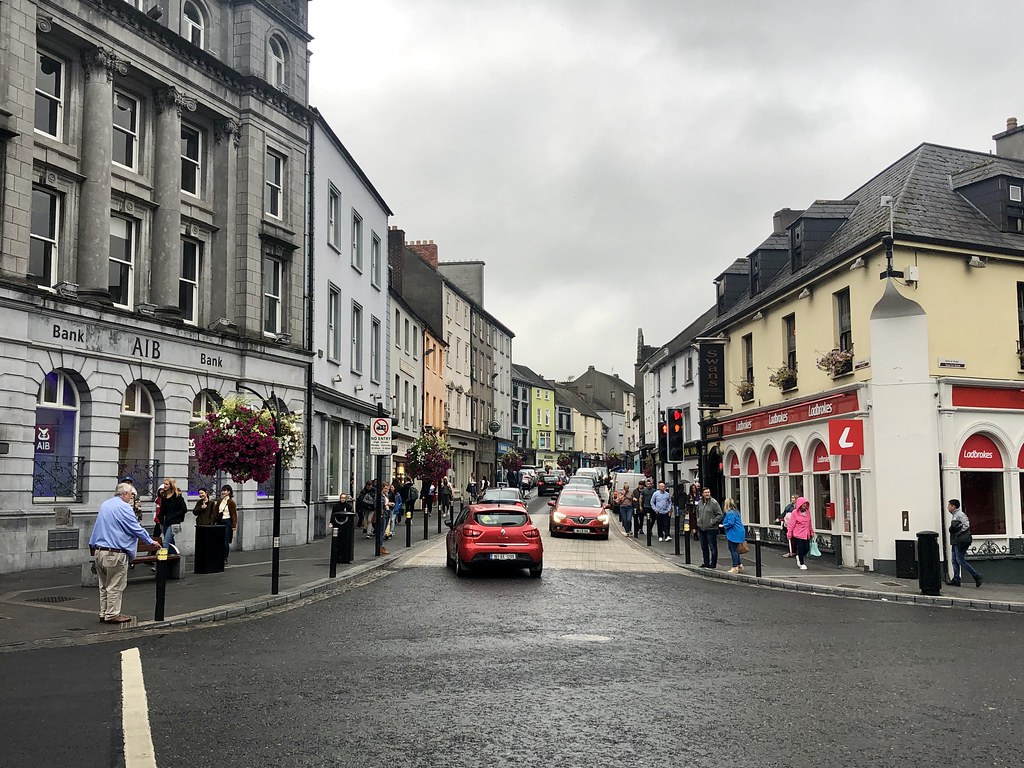 My plan had been to arrive in time to tour the castle that sits majestically in the town. Small country roads and driving on the left had me driving slower than norm though. By the time I arrived in town it was last entry at the castle but I couldn't find parking as the main lot was already closed. I decided to call it a day and headed to my hotel The Pembroke to check in.

The hotel is in a great location for walking and my room was large with a view of the back of the castle. I changed and headed out to explore the very pretty town that back in the 1640s was the capital of Ireland. Also George Clooney's family hails from here! 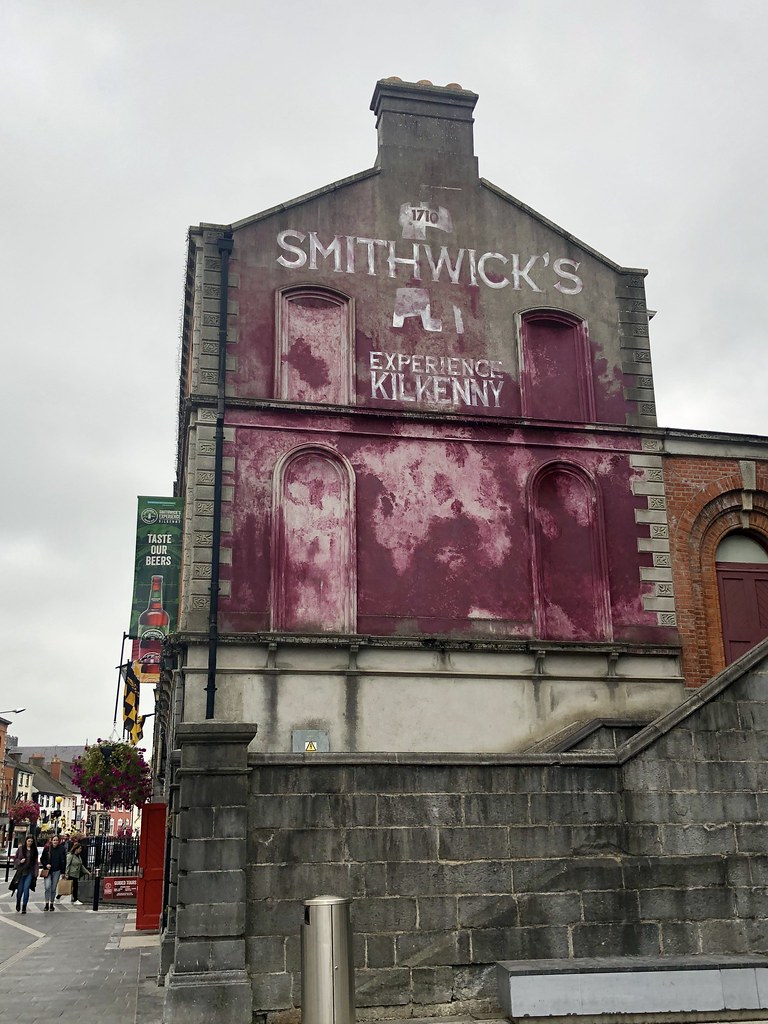 Kilkenny is also home to Smithwick's brewery, and although I didn't go in for a tour, I did stop in at Bollard's Pub for a pint, or two. It was such a different feeling already, being in a small country town as opposed to the cities of Dublin and Belfast. I was relaxing into this slower pace and it felt great.

I had made dinner reservations at Butcher (thanks for the recs Natalie and Clio!) and it was a good thing I had as it was packed! OMG the food here was soooo delicious. The steak was one of my top 5 favorite meals in Ireland! That was also the last good martini I would have for a while! 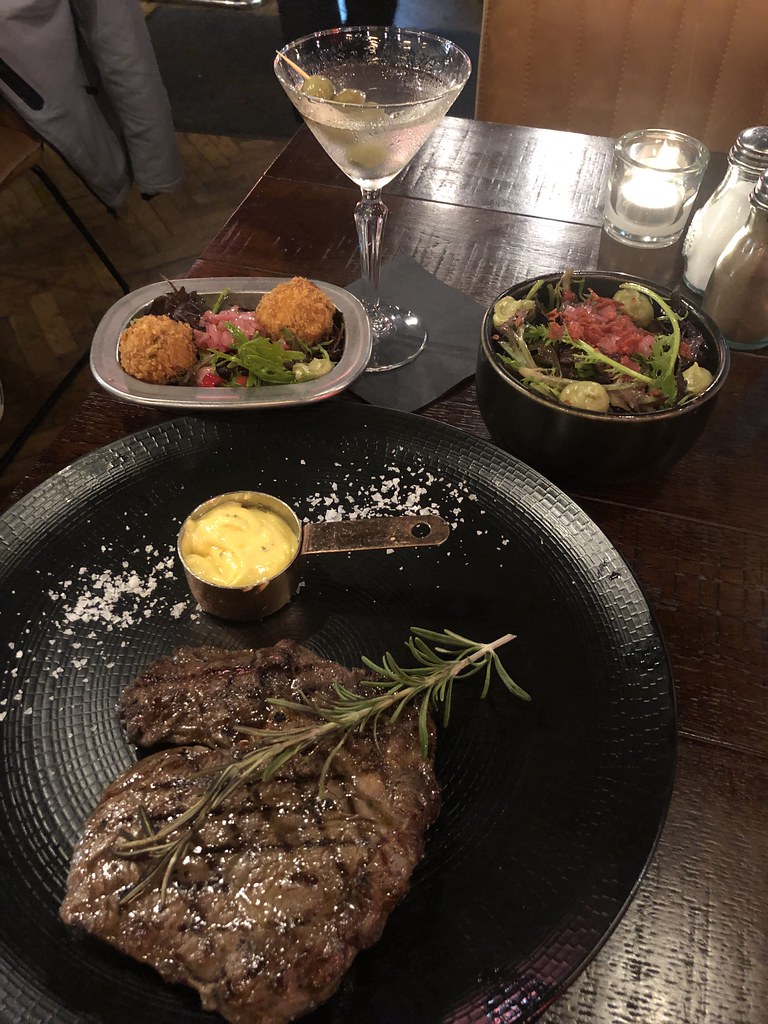 After dinner I made my way to the Kytelers Inn for some music. The bar had been recommended to me by the concierge at the hotel as a good local spot for music. Well pretty much every person in town was here (Saturday night) as well as a few hen and stag party goers from Dublin. It was packed and the music was really good!

I would absolutely recommend all 3 of my Kilkenny stops, it was such a fun night!

I had breakfast in the hotel, a good buffet included in my room rate, before checking out and loading up my car. The Pembroke also has free onsite parking which really came in handy as the town was quite busy and also it was raining as I left. 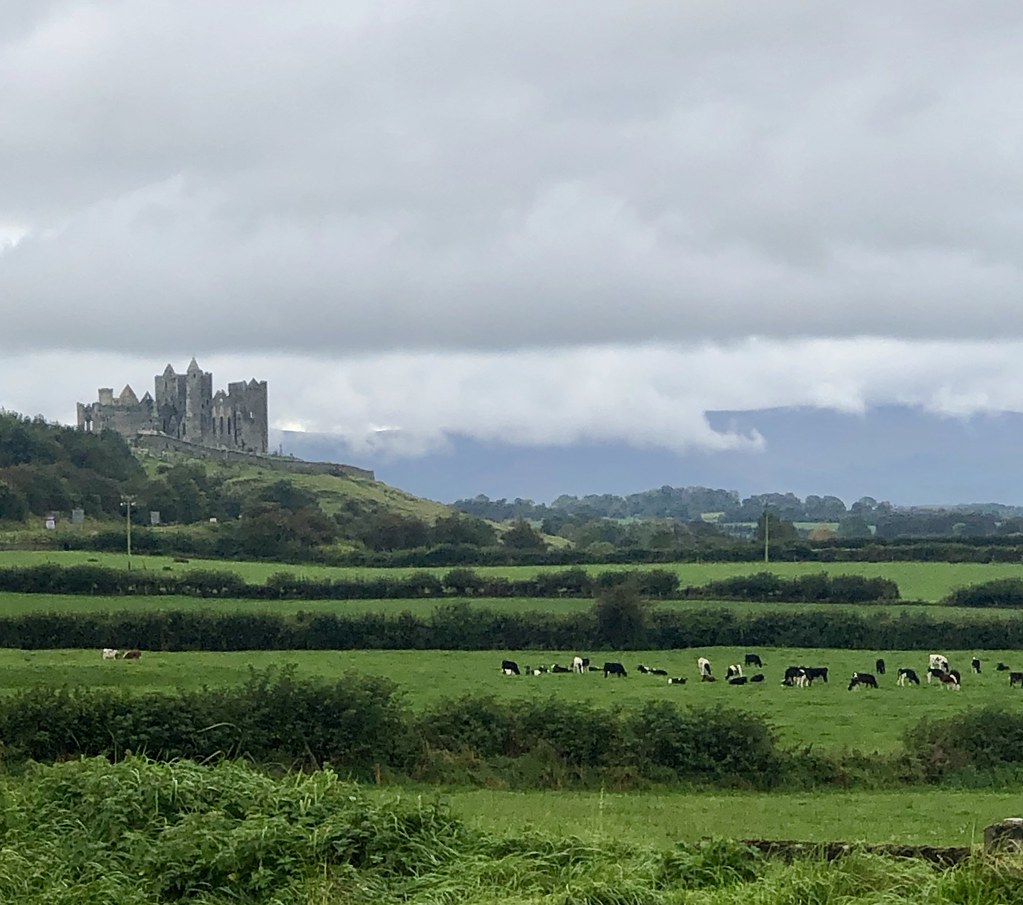 I was back on country roads, driving through beautiful green pastures, on my way to the Rock of Cashel in County Tipperary. It took me about an hour and I arrived with a little time to explore on my own before the 45 minute tour started. The tours run twice an hour and are included in the €8 ticket price. 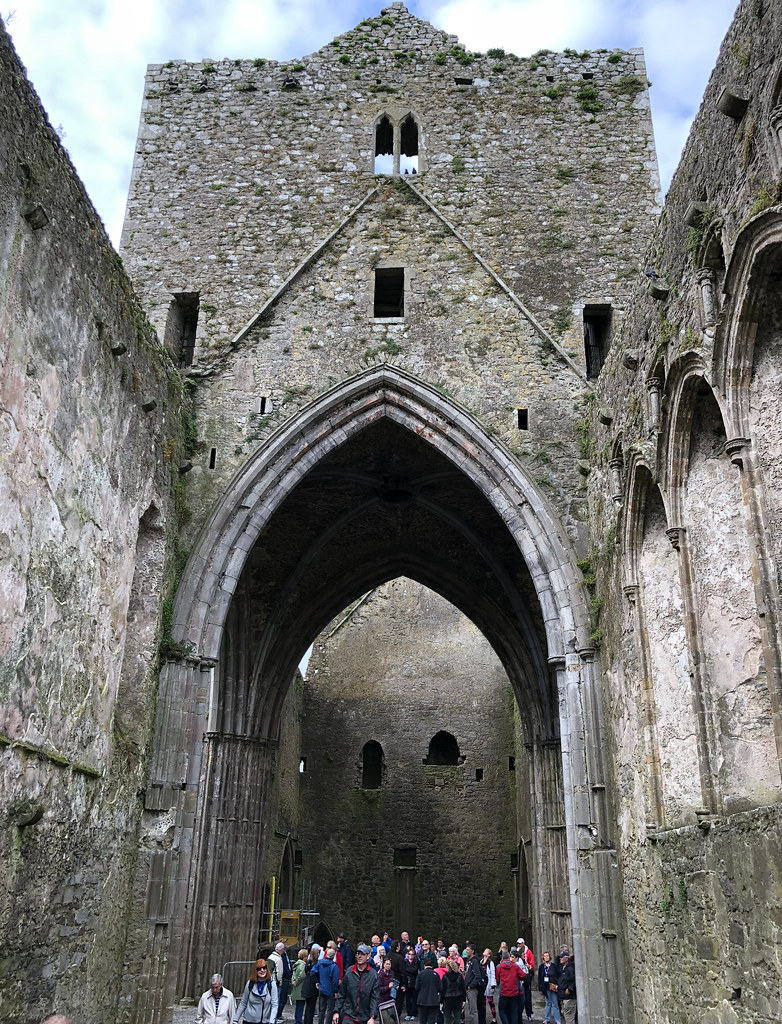 This site is absolutely gorgeous, and the guide really helps to make sense of the medieval ruins. This was the seat of kings dating back to 300 AD and the site where St. Patrick baptized King Aengus. Impressive! 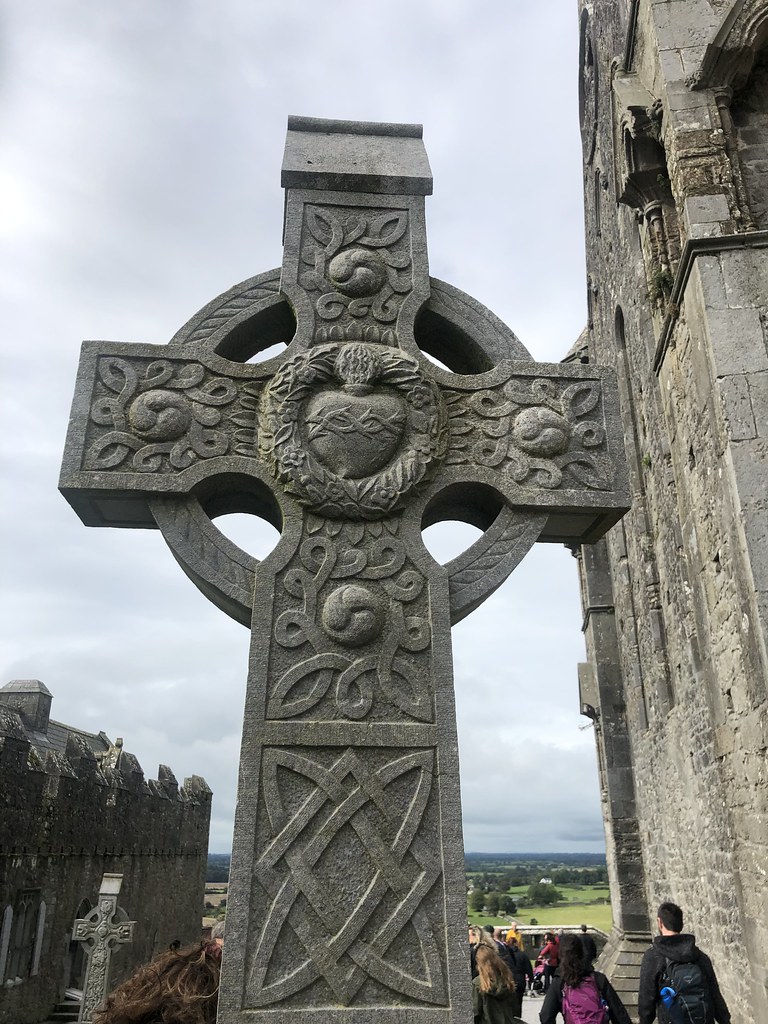 The small Cormac's Chapel, Ireland's first church and named after then King in 1134 when it was built, is available by tour only and only a few times a day, so I broke off from the main tour when they announced it was starting. 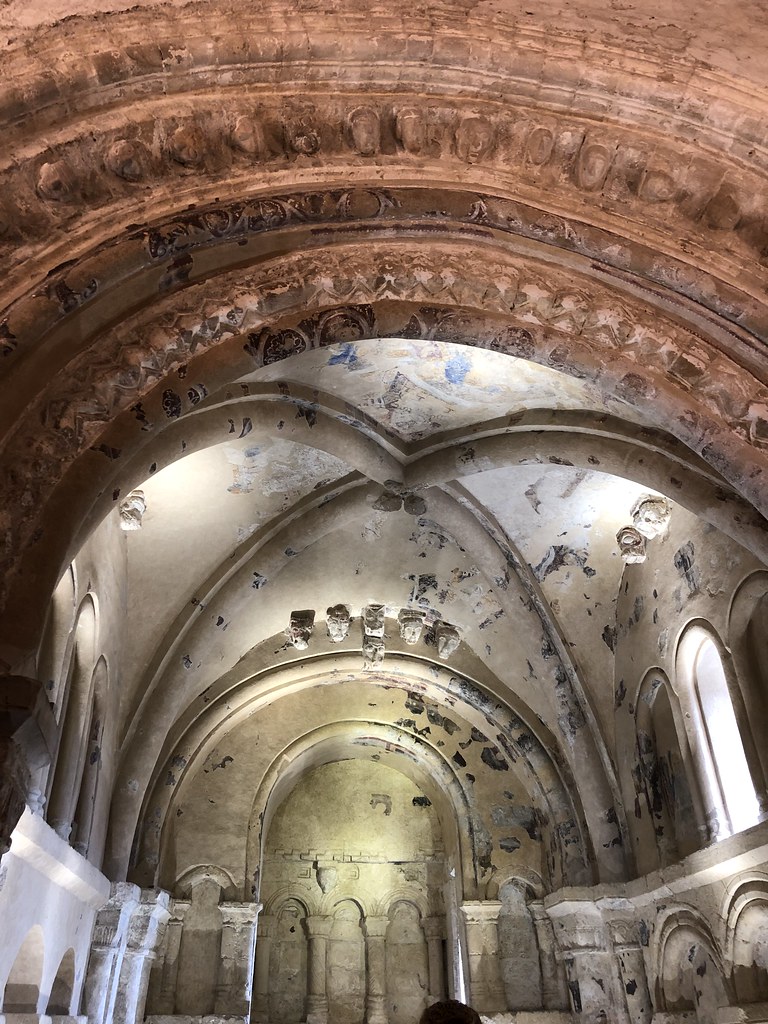 The tiny chapel is lovely to explore with its funny stone faces peering at you from where the alter once was. But it's real treasure is the barely-still-there frescoed ceiling. Having been painted over by Protestants literally whitewashing the Catholic imagery, it was found during recent restorations!
I spent a bit more time here than I had planned, about 1 ½ hours. So much history along with stunning views of the Plain of Tipperary. Plus I had partly blue skies! 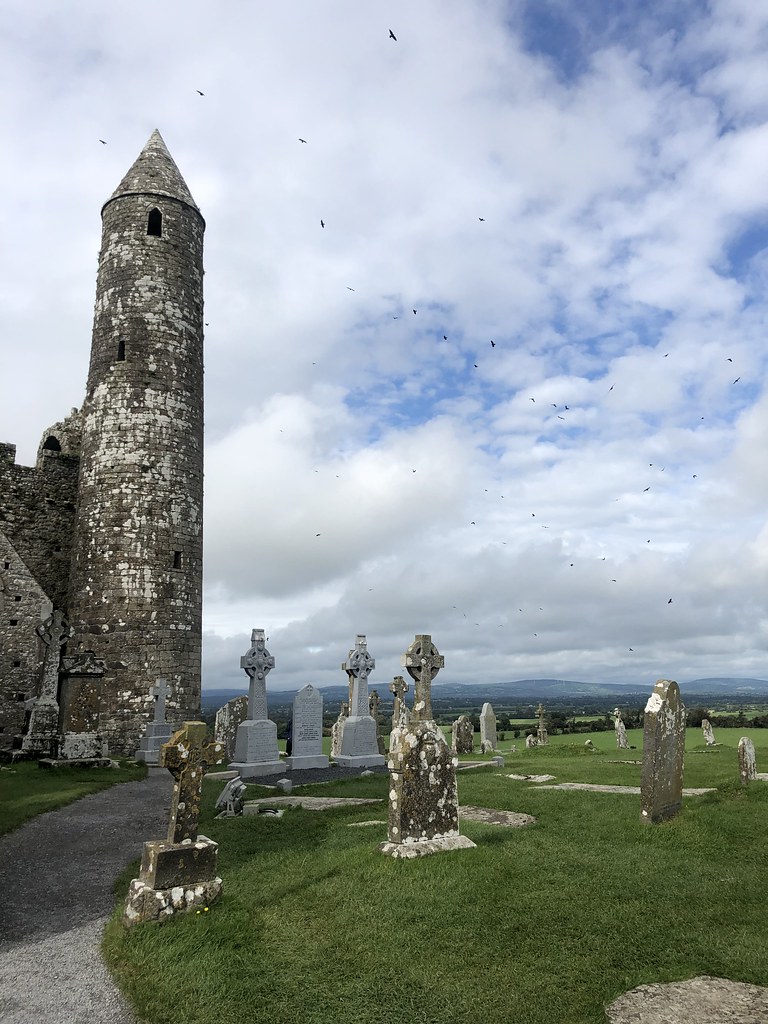 But I had an appointment with some whiskey in County Cork, so I made my way back down the Rock to the parking lot, reminded myself to stay to the left, and hit the road!

All photos from County Kilkenny (and Tipperary) here.