I took my first long-haul flight since the Covid-19 pandemic in late October to Maui. My friend Gail and I were using another Westin condo deal (my 4th time on one of these!) for the Kaanapali Ocean Villa Resort. This was the 4th rebooking of the trip, once due to work constraints and twice due to Covid. For $948 we would be staying for 5 nights/6 days in a one bedroom/2 queen bed apartment. This included a rental car which we upgraded to a convertible for $318.

We also used an Alaska Air companion fare and upgraded to Premium seats which gave us free drinks as well as the middle seat free, something Alaska had done during the pandemic for a while.

There were forms to fill out for entry to Hawaii, including proof of vaccination, and masks were required on the flight. It felt heavy & a little uncomfortable but it also was exciting to finally be going somewhere again!

Our first stop after leaving the airport (which has a huge new rental car area that you take a trolly to) was Tin Roof to pick up some lunch. The casual eatery, owned by Chef Sheldon Simeon of Top Chef Seattle season, was doing take-out only from its strip mall location. We pulled in, made our order online (dodging the line in the hot sun), and found a random beach along the highway to eat at. My mochiko chicken with garlic noodles were delicious!! And the orders were huge! 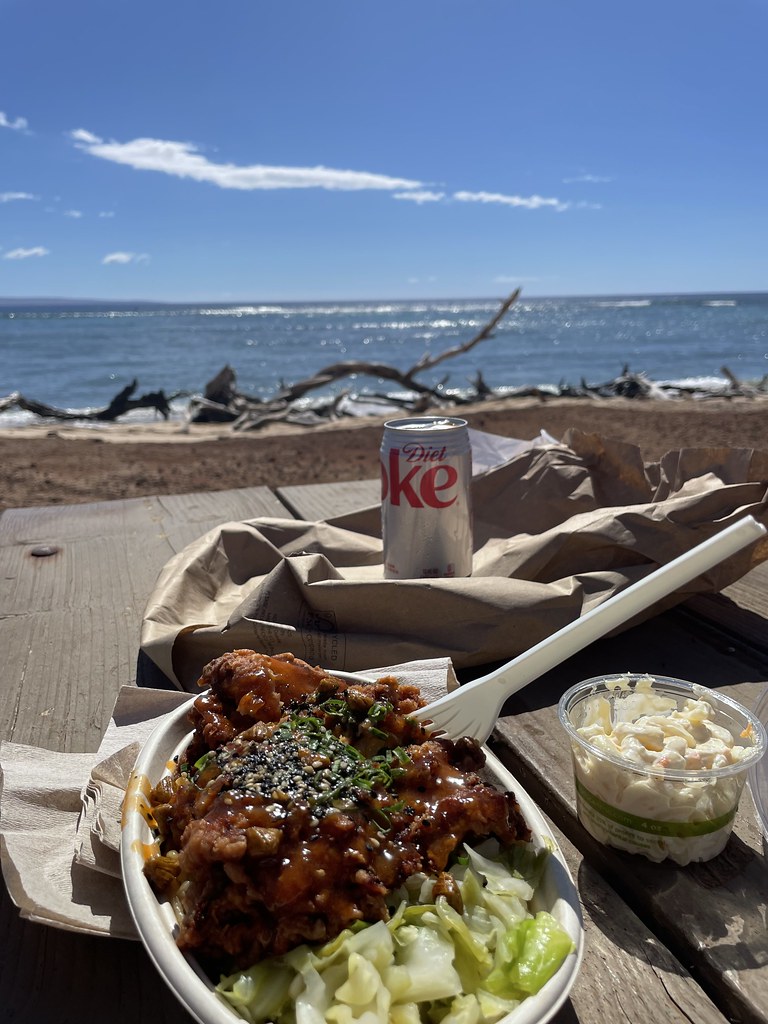 Upon checking in to the Westin the front desk agent gave me an option between a few rooms, we ended up with a fantastic location, mid pool with peek-a-boo views of the ocean and a balcony spanning the living room and bedroom. Room #2311 if you are so inclined. Bliss. 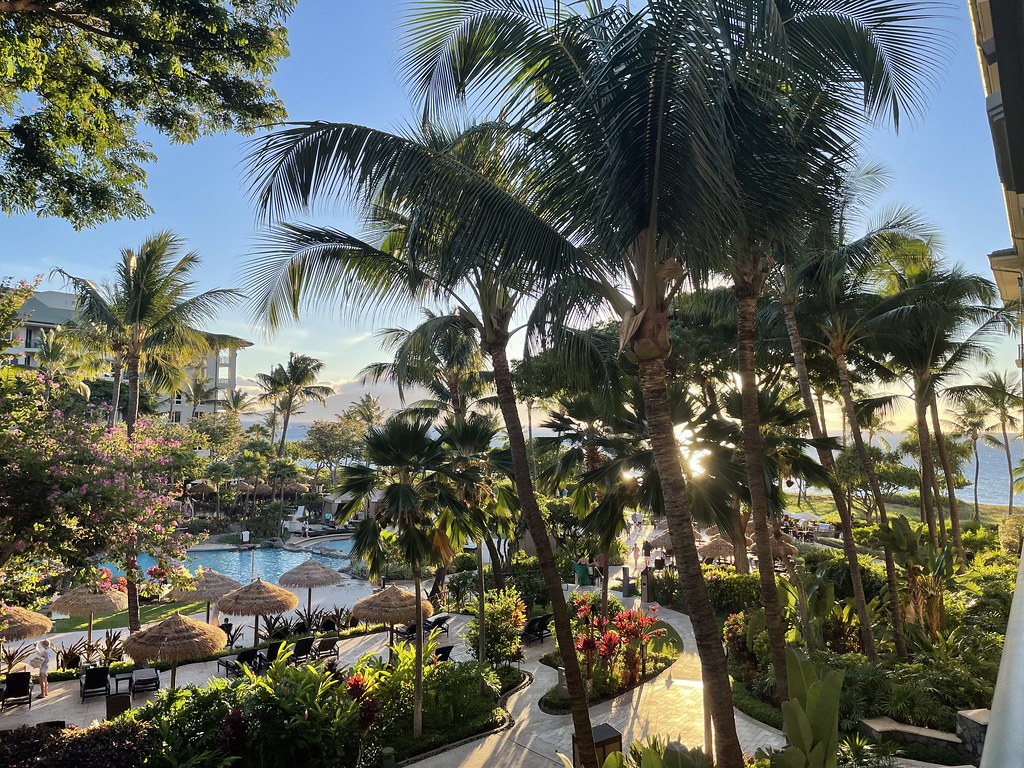 Most of our days started with a walk along the beach path, breakfast at the hotel's restaurant Aunties (one of only two restaurants open due to hiring challenges), then down to the pool (masks were required inside the hotel but not by the pool or on the beach) where we rented a clamshell cabana for $75. We had gone grocery shopping so we could have our own wine or margaritas (our kitchen was fully furnished including a blender) and snacks by the pool. Daily drinks on the beach at sunset became a wonderful study in the changing clouds over Lanai. 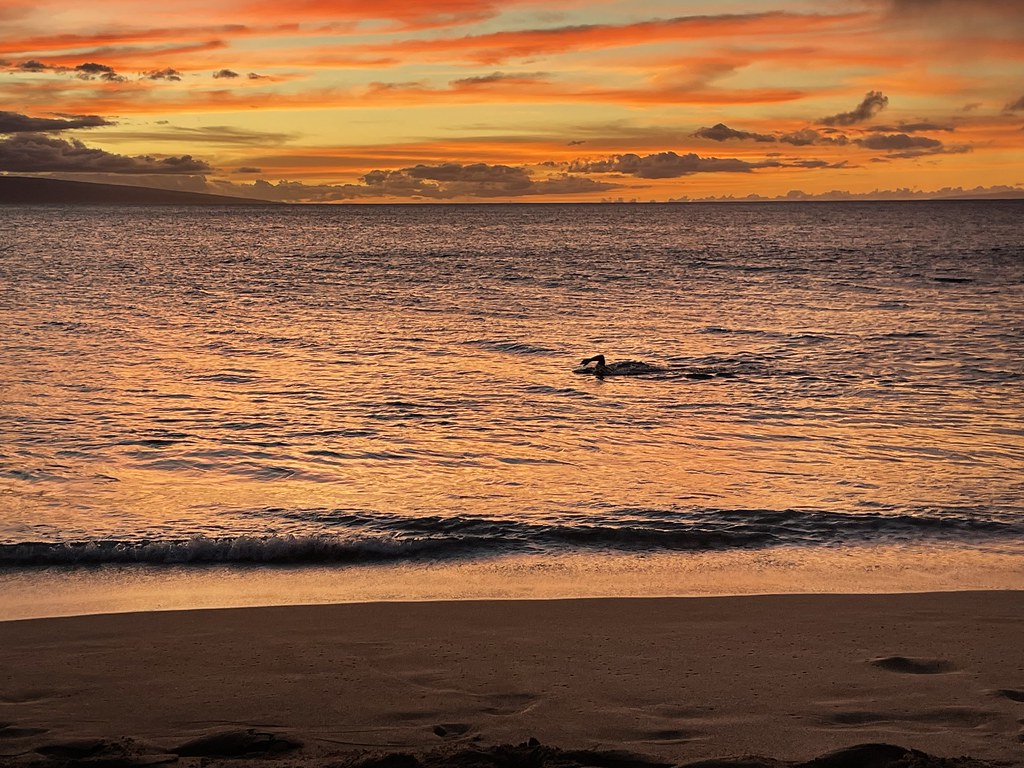 One day we booked a snorkel trip with Ultimate Whale Watch out of Lahaina out to Lanai. We were on a Zodiac style boat but it had seats built in. Our captain Chris and his mate Levi were awesome. It wasn't whale season but we did see spinner dolphins which I hadn't seen before! 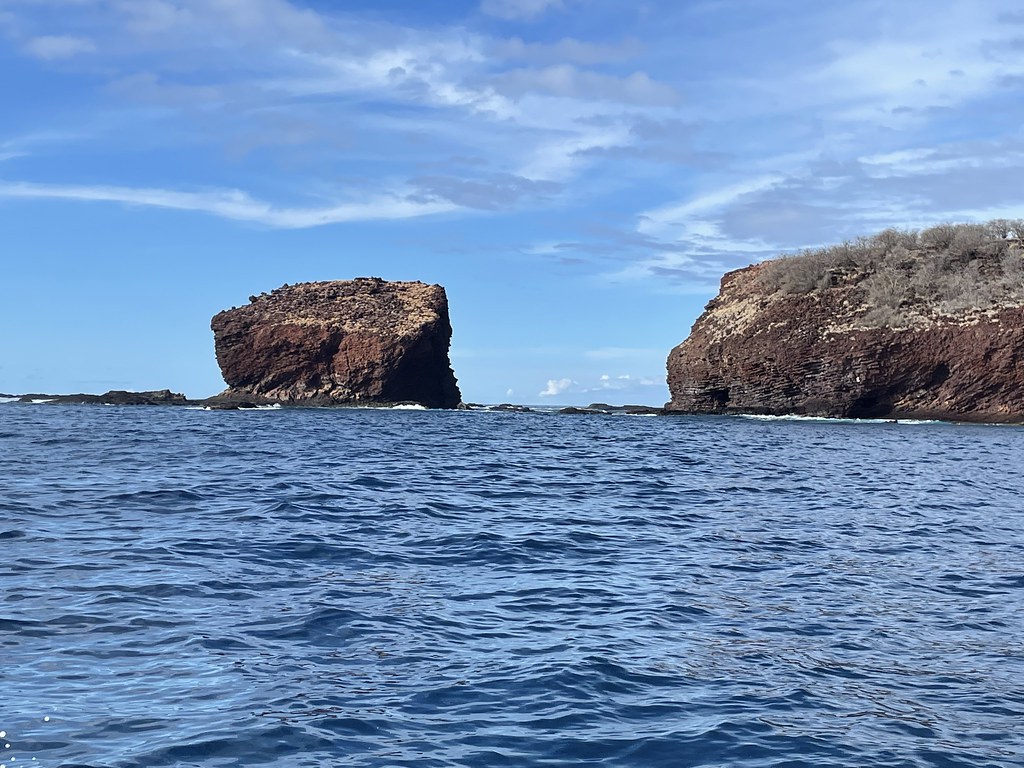 We went past Manele Bay, where the Four Seasons is located, and snorkeled just near this rock and coast cliffs. The coral was absolutely gorgeous and there were tons of fish. Gail and I were first in and last out and had a blast! Once back onboard the crew handed out homemade banana bread as a snack. Very sweet. 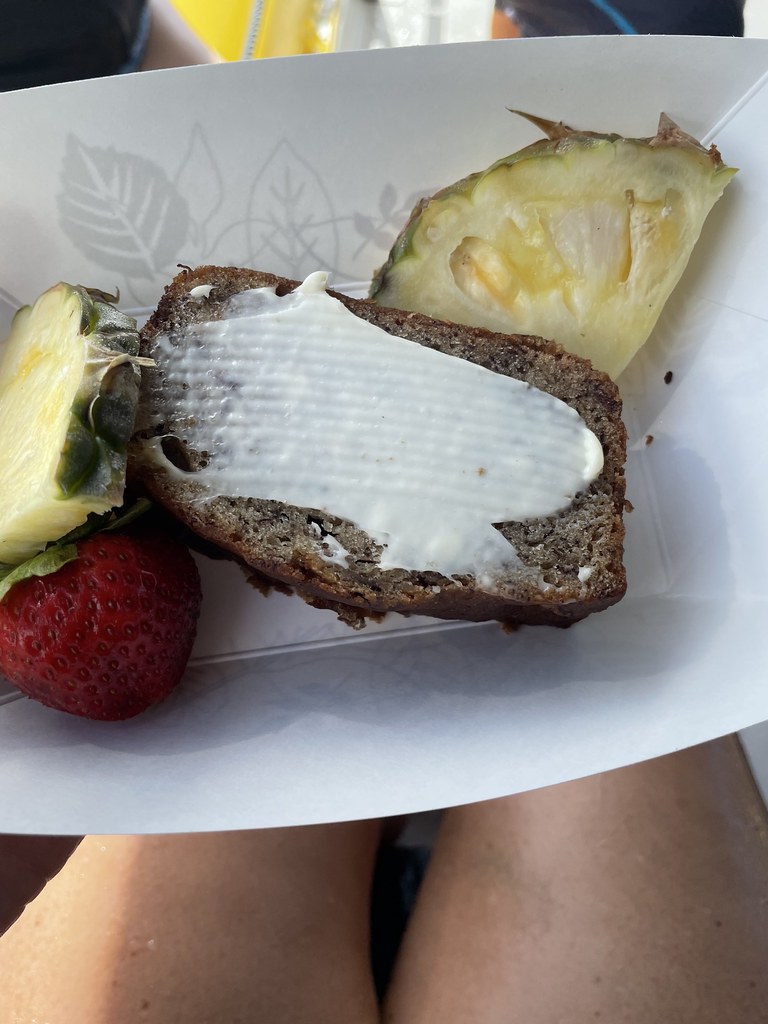 Unfortunately on our way back across the channel our boat had some engine problems, but instead of stressing about it, our crew pointed out flying fish and told us things about the islands and their diving. And when we did finally get back over to Maui they took us to Turtle Town. This area, where an old cement wharf had come down in a hurricane, is a favorite hang out for honus. As soon as we jumped in there were 3 huge turtles swimming towards us! I had to try to back up to give them way! We ended up swimming around with 8 turtles and spied a small shark under one of the sunken cement blocks. We celebrated the great snorkeling back on board with mimosas we had brought with us! 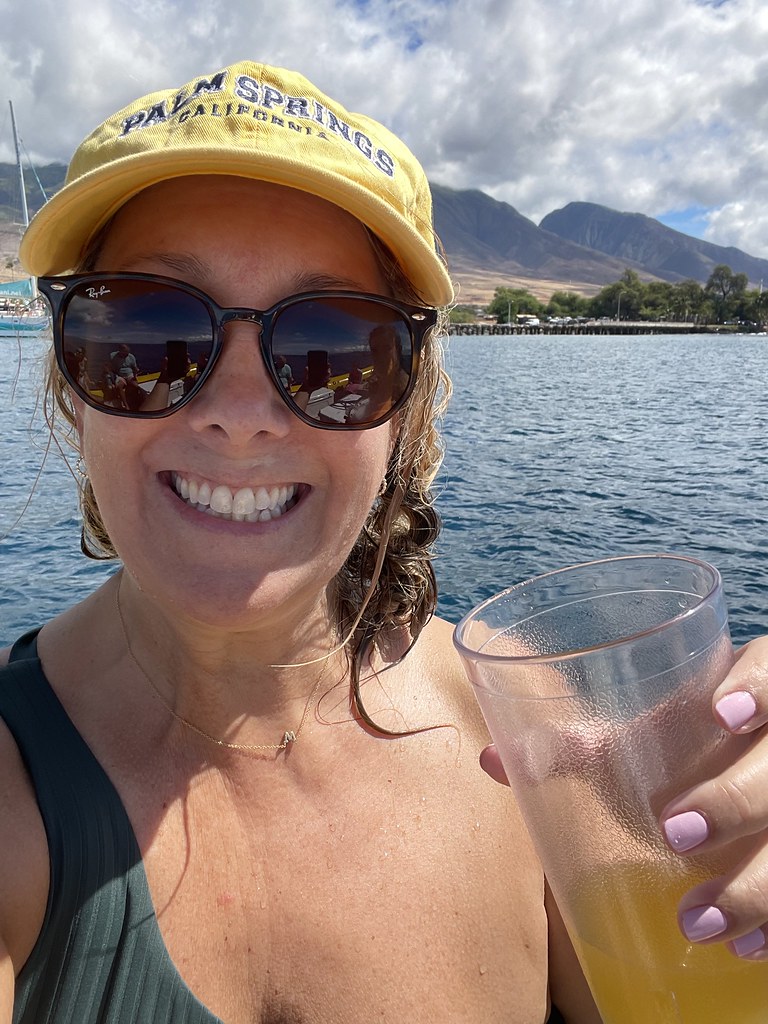 Another day we drove up the to the very northwest tip of the island for a hike to the Nakalele Blowhole. The drive is very windy but beautiful. We parked at the 2nd trailhead which is just past MP 38. There isn't really one set trail, it's a very dusty and rocky hill that you kind of have to scamper down. 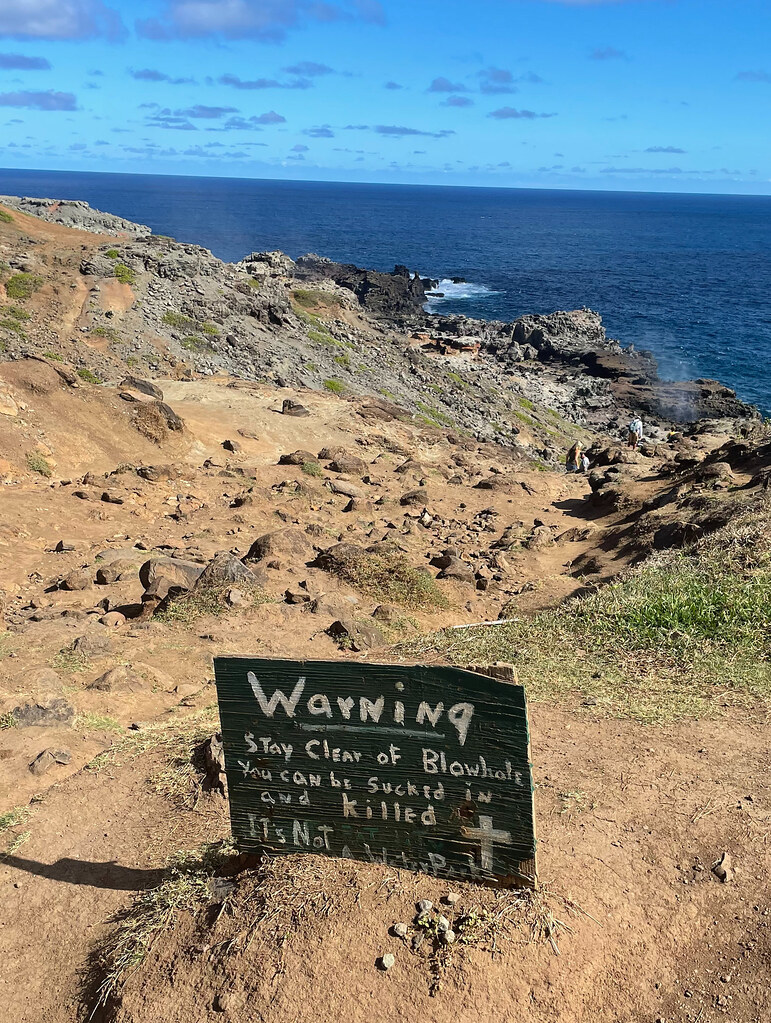 It's only about a mile down to the blowhole and the last part of the scramble is mainly old lava flow. The rock formations are super interesting and there are lovely views of the ocean of course. But the main attraction is the blowhole and it certainly did not disappoint! We hung out for a bit taking in the cooling spray! 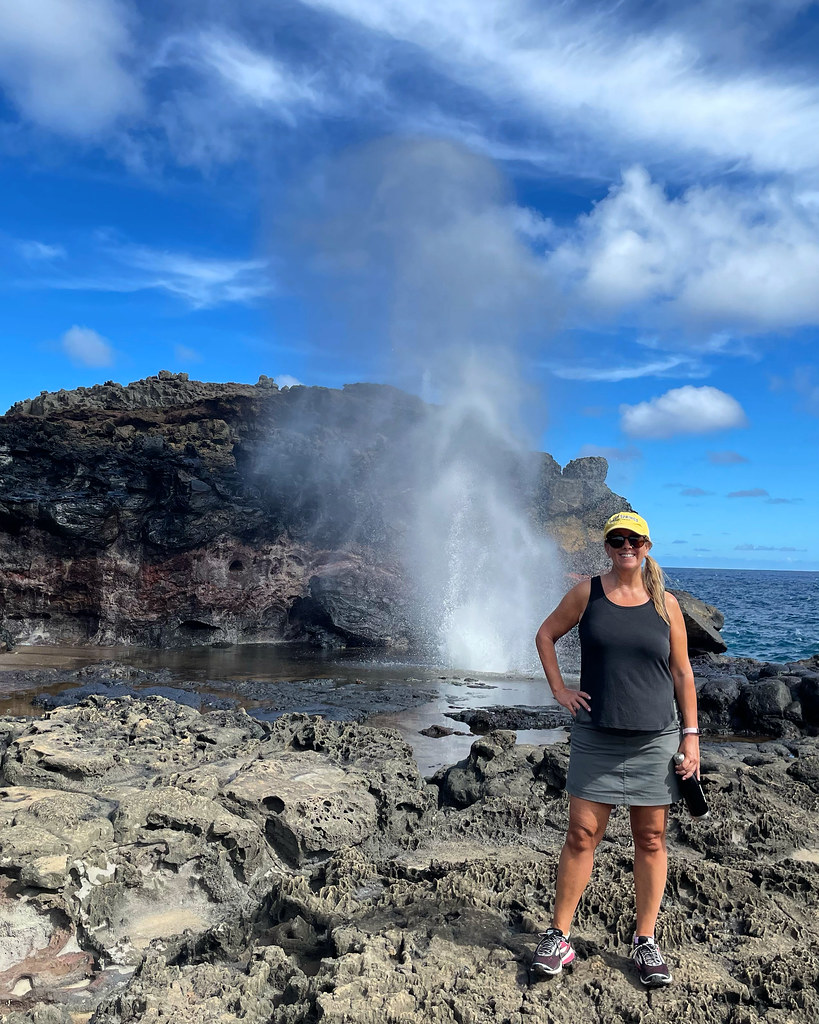 The climb back up wasn't exactly hard, but it was difficult to pick out the best way up through the rocks and lava. Two guys who were just a head of us were super sweet, pointing out the best routes and even lending a hand up the steeper parts. It was a great adventure!
We drove back down towards Kapalua, stopping to take in a great view of Honolua bay and a pod of dolphins swimming around. 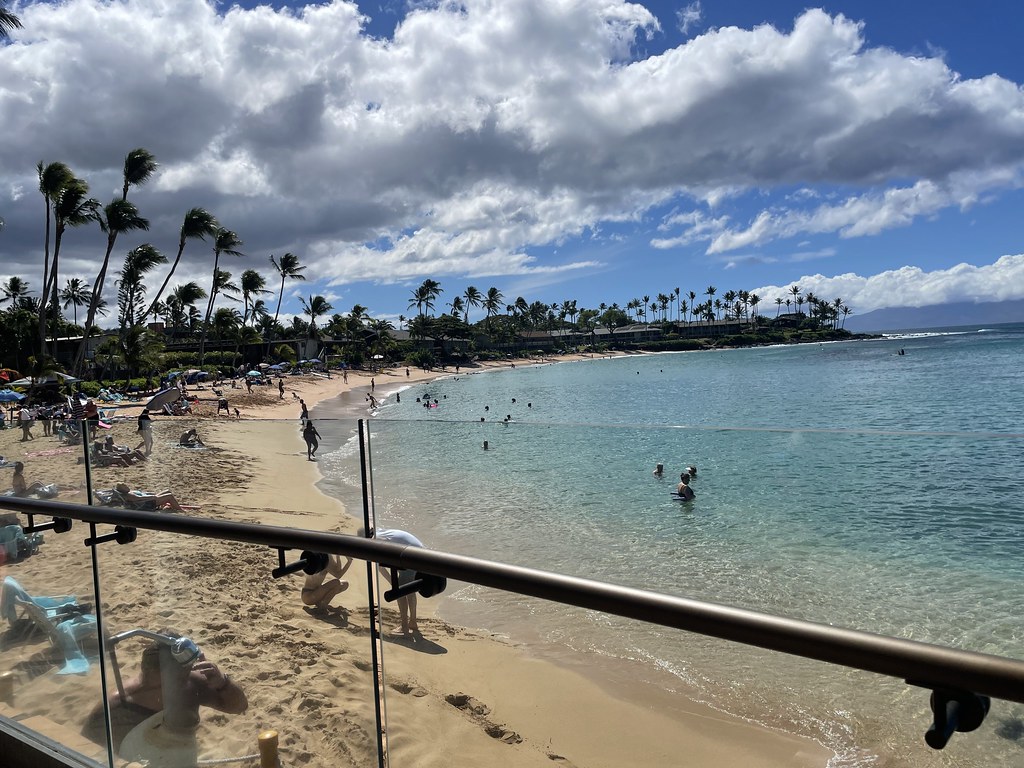 Originally our plan was to snorkel at D.T. Fleming beach but the red flags were out and the surf was big so we continued driving thru Kapalua to check out the other beaches. We passed a sign for the Sea House restaurant, which offered parking and ocean views, and decided to have lunch there. Turns out they are right on Napili Beach! We had a great lunch on their deck and then grabbed out gear (we had rented from Bob's) out of the trunk and went for a snorkel. Immediately upon entering the water there were 2 large honus!! This will be a reoccurring stop for me on future trips!
Another day we drove up to the old town of Paia. I had never been and with Covid the tiny town was even quieter than normal it seemed. We had a good time shopping at some of the cute boutiques before heading to Mama's Fish House for our lunch reservation. 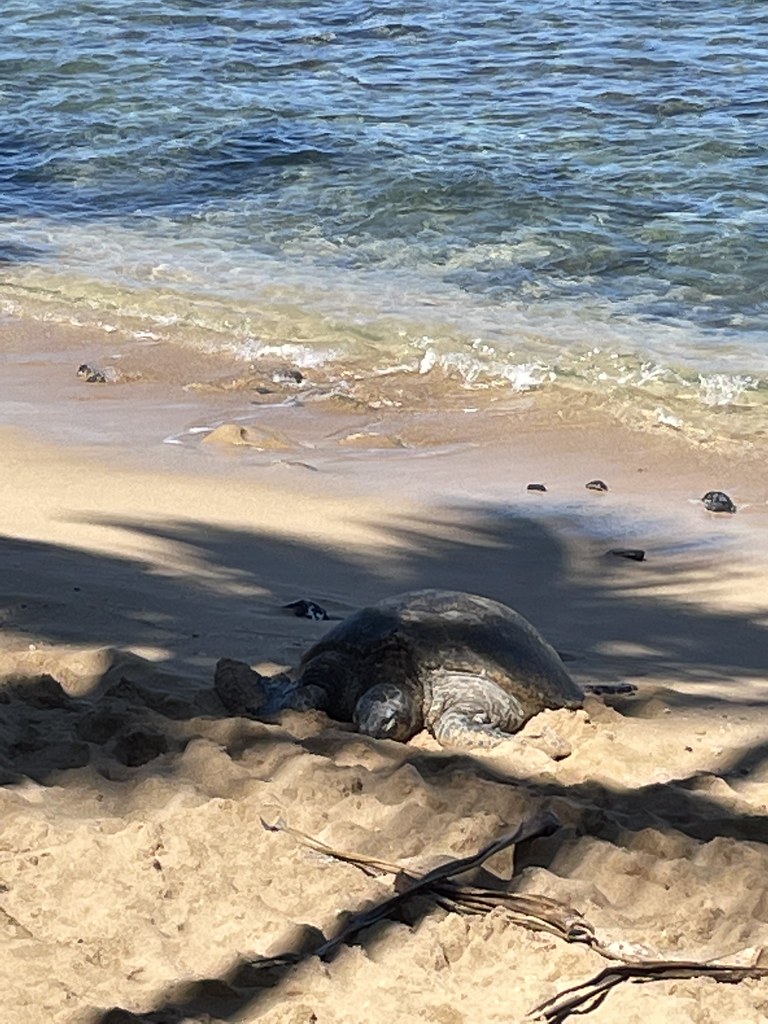 While wandering their grounds before lunch we spotted another huge turtle sleeping in the shade on the beach!
Mama's is beautiful and delicious and very expensive. I've been just once before for dinner and I have to say that lunch is the better bet because you get the gorgeous views! 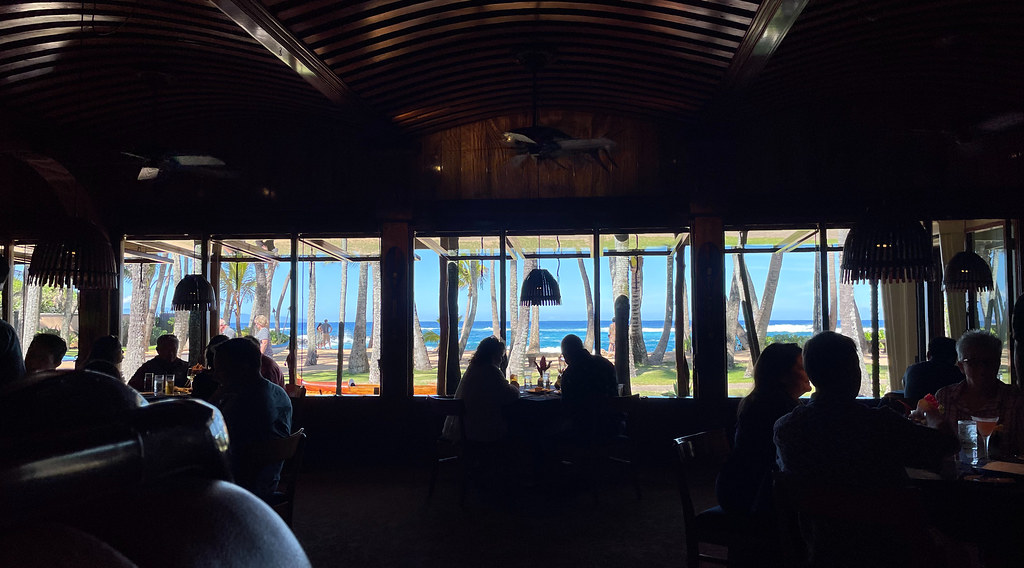 During our trip we also ate in Lahaina a few times. It was easy to take the Westin shuttle and then Uber back as we were generally returning after the shuttle ended for the night.
Kimo's is one of my regular stops; I go simple with their fresh catch and brown butter. If you have a sweet tooth their Hula Pie is ridiculous and not to be missed. 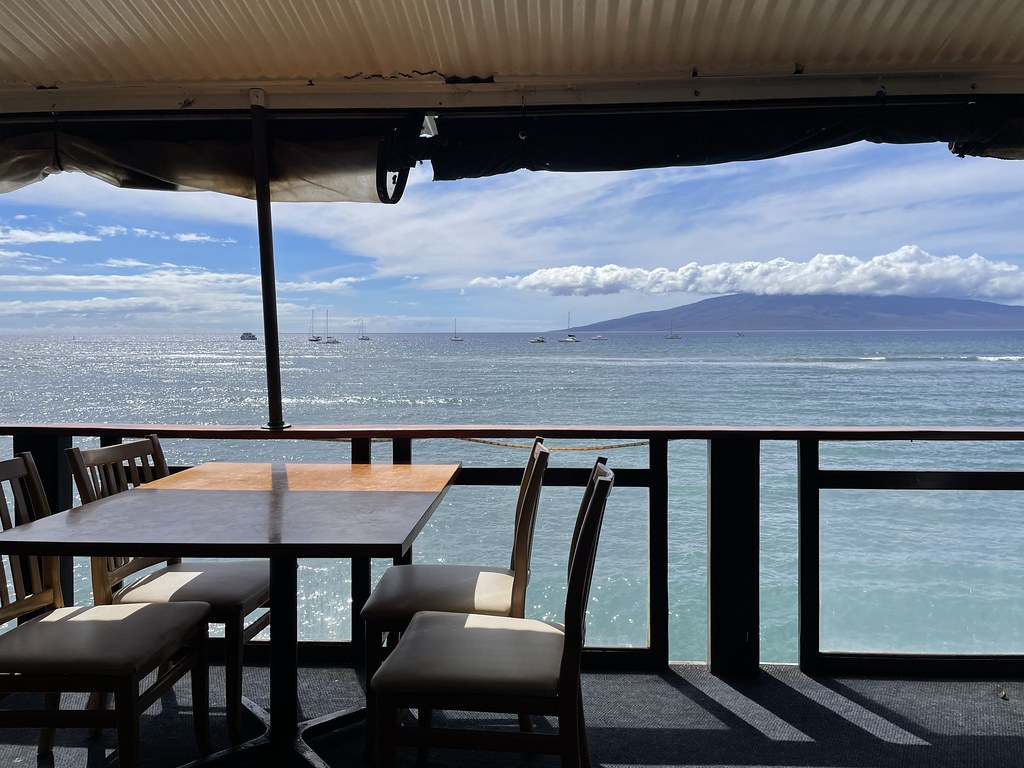 We had a surprisingly great lunch at Lahaina Fish Co one afternoon. My poke salad was HUGE, the Mai Tai was solid, and the view was gorgeous! I'll return here.
We also tried the Mala Tavern, not at sunset as most people do since sunset was at ~5:30 and we just don't eat that early! It's a very cute spot with nice cocktails and great food.
And the Mexican food we had at Frida's on our last night was sooooo good! My black beans with grilled fresh prawns in garlic butter were thoroughly enjoyed sitting outside with this view of sailboats moored in the bay. 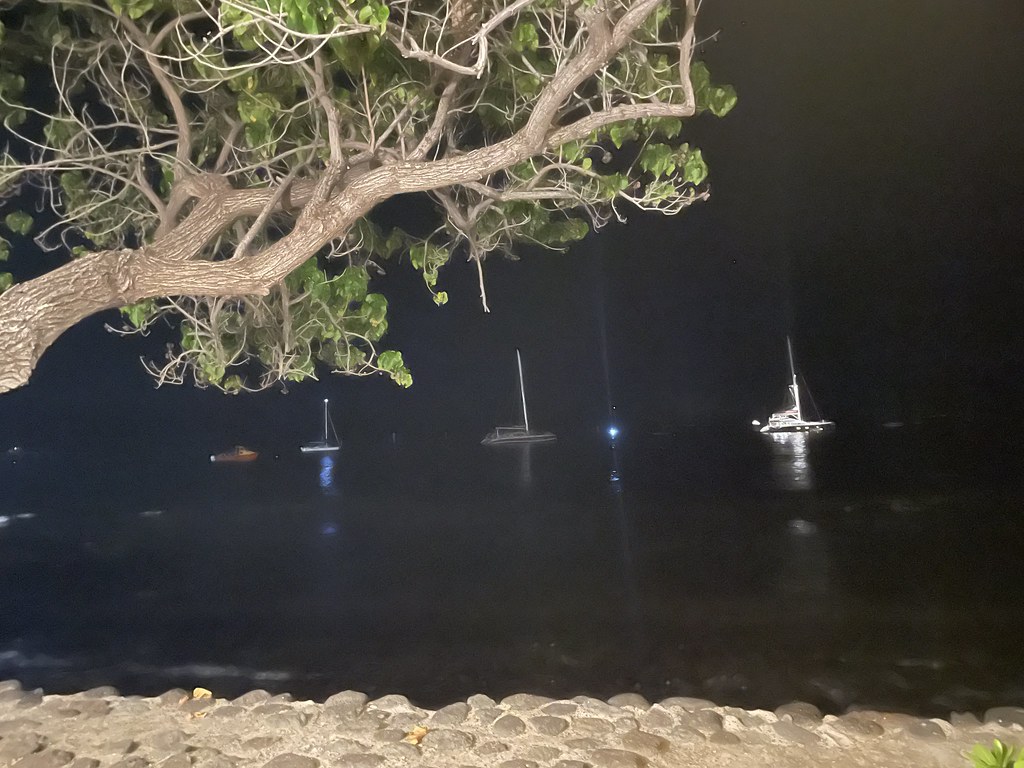 It was great to have some new places to check out in Lahaina and none of them disappointed. Closer to our hotel we walked over to Dukes on two separate occasions for dinner. It was close and waiting for a table in the sand with one of their big Mai Tai's is not a hardship for me! 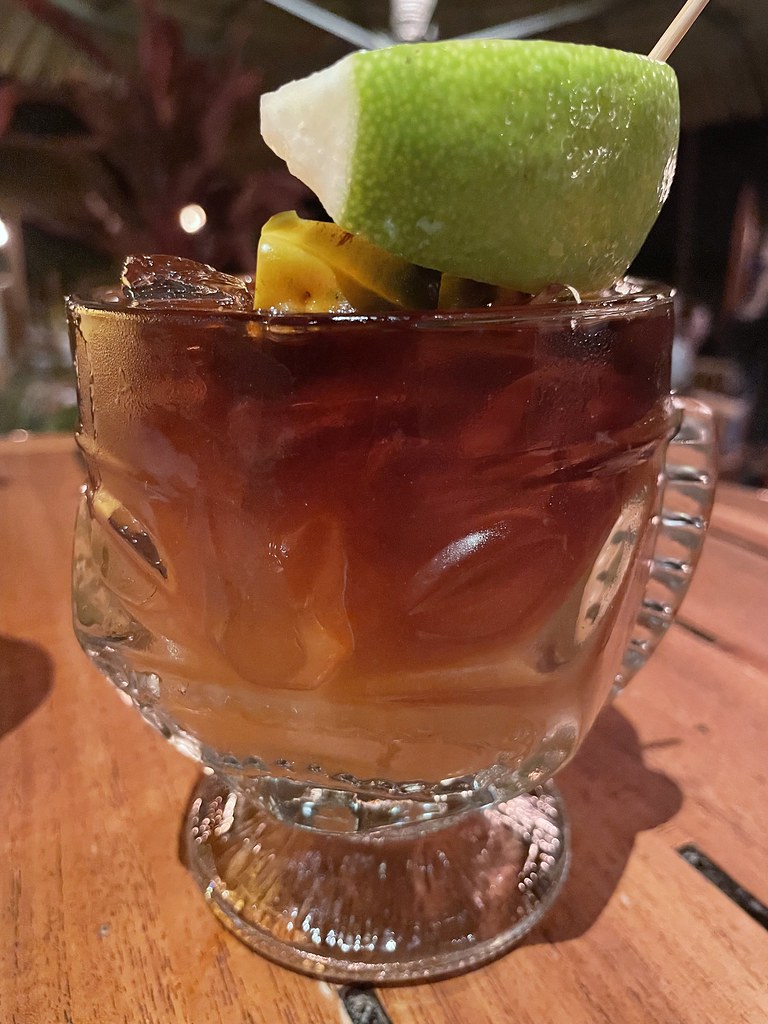 Of course I had to sit through a 90-minute timeshare presentation at the Westin which is now owned by Marriott Bonvoy. In years past I had scheduled the presentation for my last day and then canceled, saying I had to leave to catch my flight. But the fine print now states that if you don't attend you will be charged at full rack rate upon checking out.
I booked it on the first morning we were there as I knew jet lag would have me up early anyway. It was painless as I just kept saying that I wasn't interested. Upon leaving they offered me another vacation package! Since I still had 4 more days I could think over that offer while enjoying a Mai Tai or two! I did end up purchasing another package so I'll be visiting this resort again in the next 2 years :)
Total turtle count: 11! Sun, sand, snorkel...it was a fantastic girls' trip and a bargain on top! 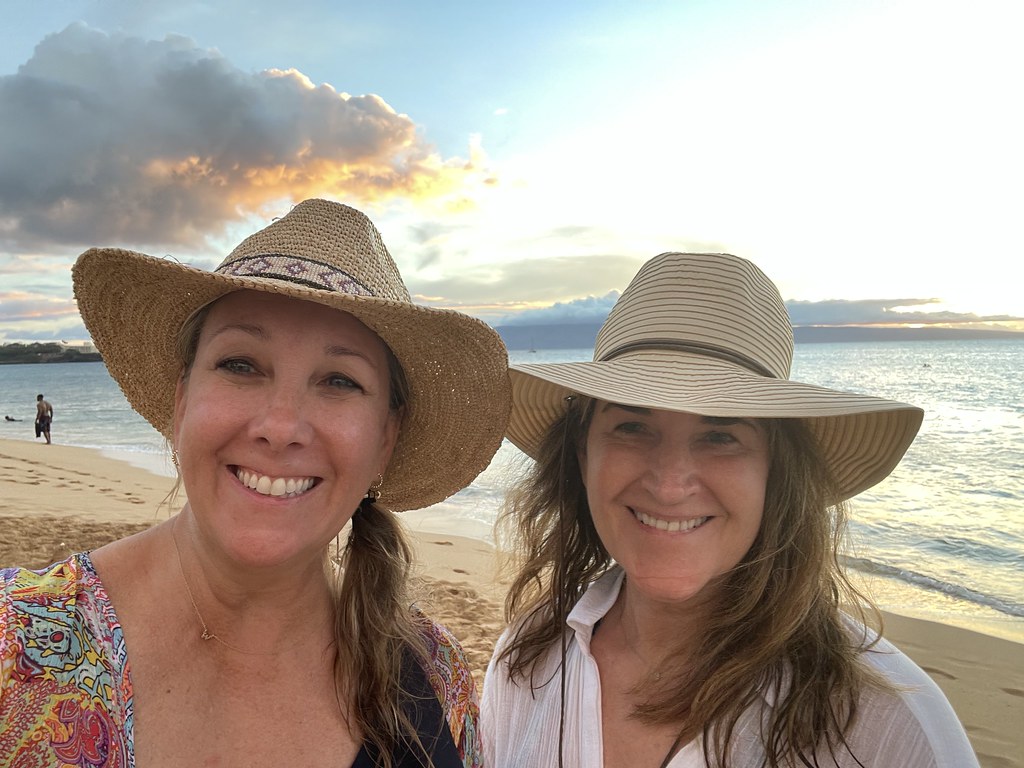