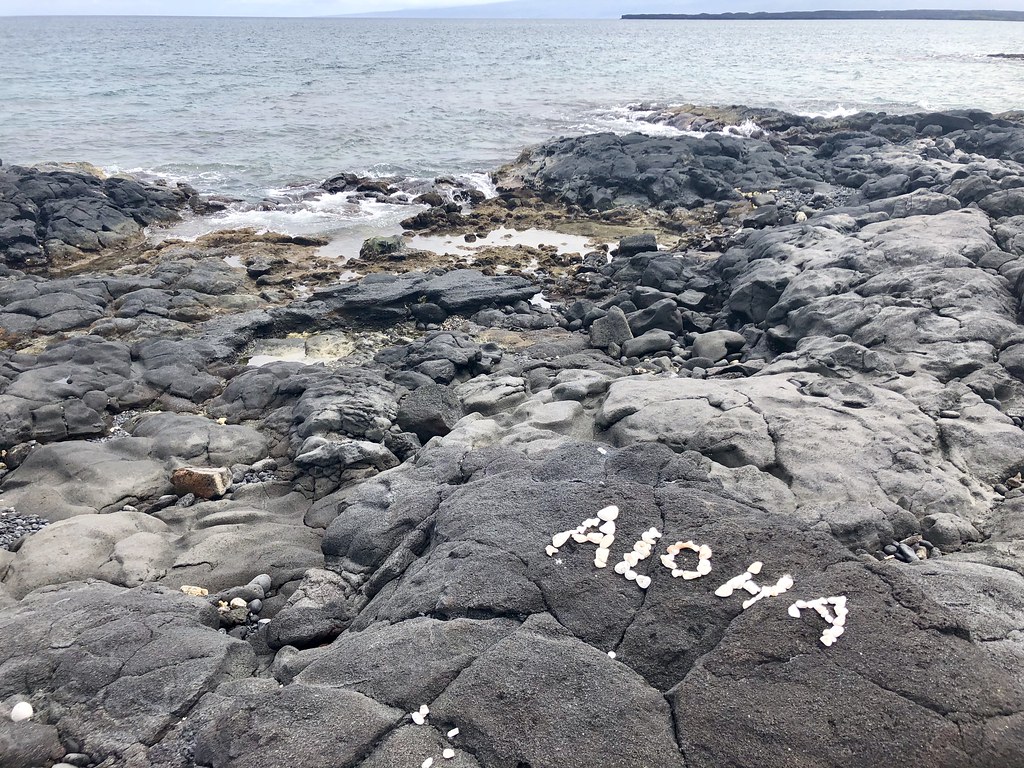 Last June, just 26 hours after arriving home from San Francisco, I repacked for much more tropical weather and headed off for a little solo, chill trip to the Big Island of Hawaii. It had been 20 years since I had visited the island, for the funeral of one of my uncles, who passed away much too young, and I was looking forward to returning and exploring. 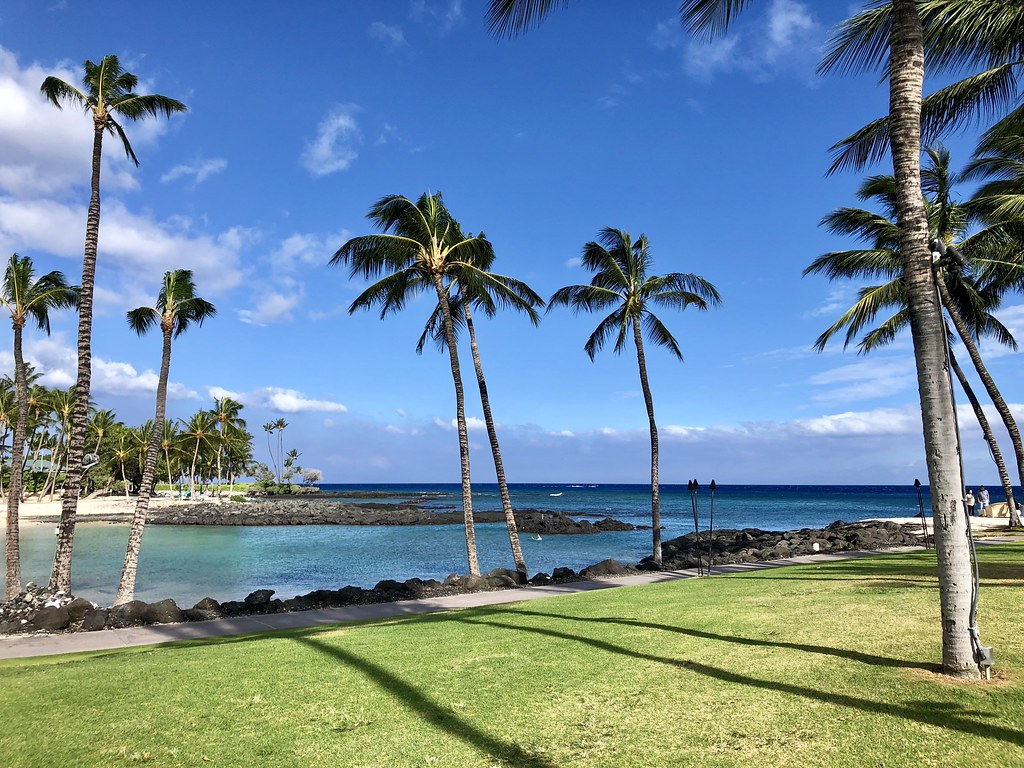 I was happily surprised with an upgrade to first class on Alaska Airlines, especially as it is a 6 1/2 hour flight! Alaska doesn't hand out mai tais on their Hawaiian flights anymore, but my mahi mahi on schnitzel, and the Nancy Silverton cherry gelato were unexpected and delicious!

It was about 8:30pm when I landed, I picked up my convertible rental car and drove 30-minutes north up the west coast to the Fairmont Orchid. There was barely anyone on the road at this time so it was a very quick and easy commute.

Self-parking at the resort is free and is onsite, so after figuring out how to close the roof of my car in the dark, I made my way to the hotel lobby. Originally upon checking in I was given a room in the North Tower. It seemed a bit run down and really far from the restaurants and bars so after requesting to be moved, I was given a fantastic room in the South Tower. King bed, balcony with partial ocean & pool view, and huge marble bathroom with a separate tub and shower. Hello holiday! Of course it was dark so I wouldn't get a peek of my view until the morning. For the time being I settled for a mai tai in the bar. 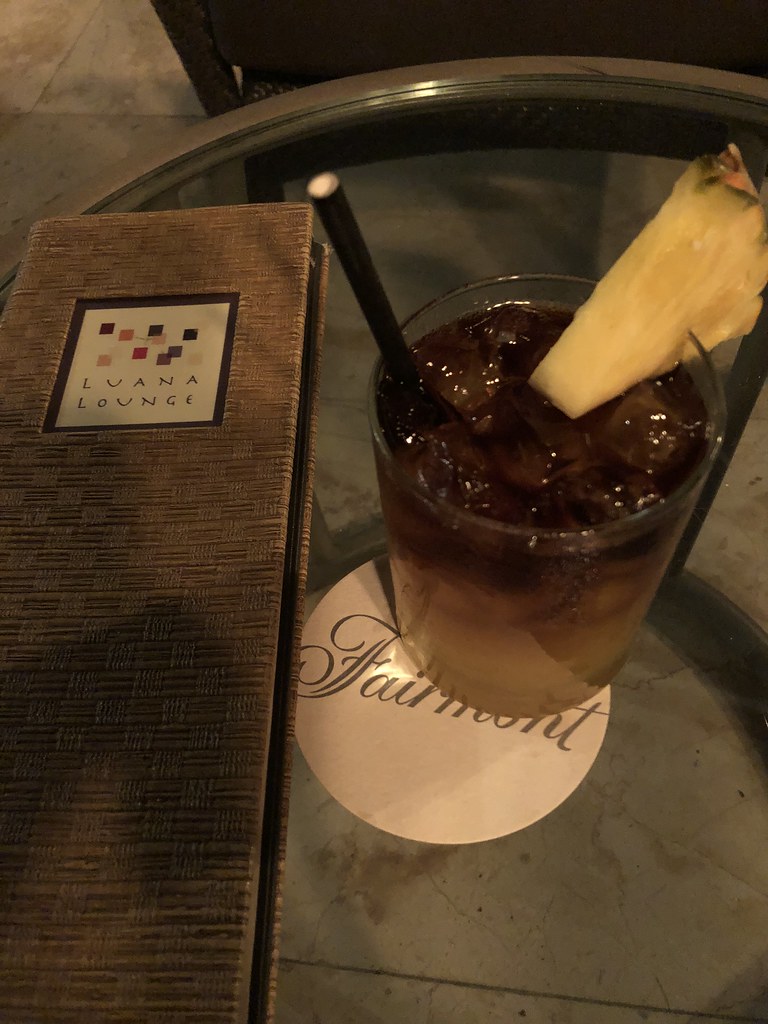 As someone who sleeps later than most, it's always strange for me to wake up so early when I'm in Hawaii because of the time difference. I've gotten into the habit while on vacation on the islands to use that time for a morning walk or hike. On my first morning on the Kohala Coast I did a 4-mile walk south along the seaside. It was sooooo beautiful out! 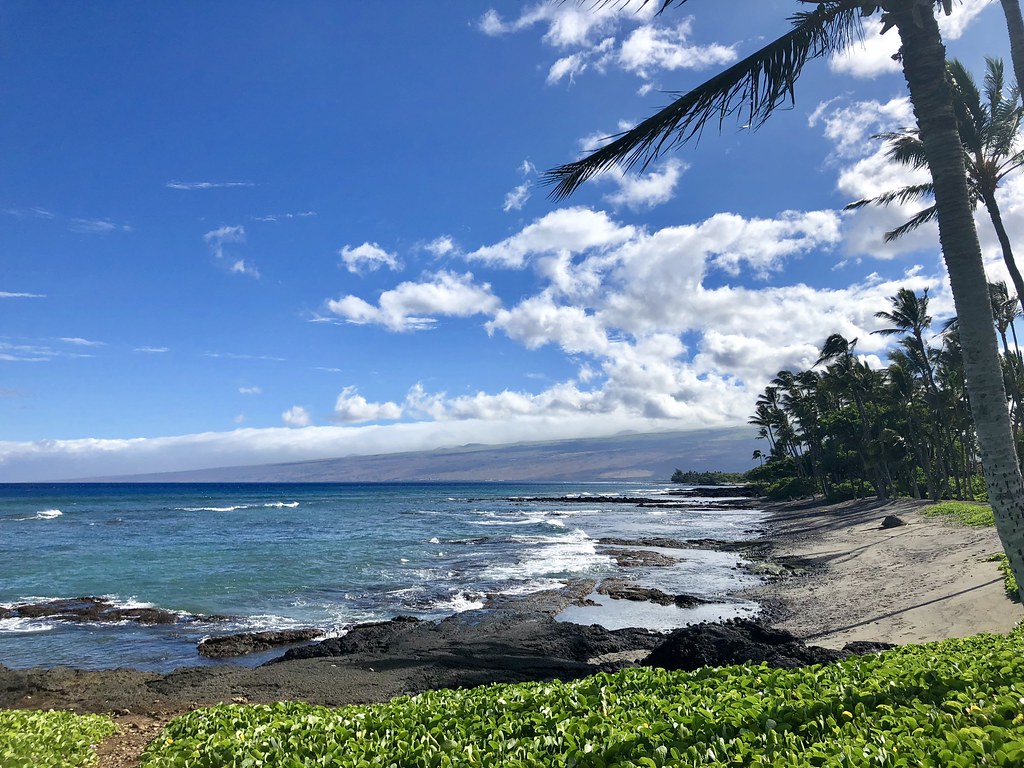 This side of the Big Island is known for the lava flows which cut large paths into the ocean. I loved the scenery as I made my way from the Fairmont's property to the Mauna Lani Resort. Just past the resort there are some very cool fishponds, which naturally catch and trap fish. They've been used since prehistoric times and are still used today. Farther along and just off the golf course there was an ancient Hawaiian dwelling from the 1600s. Quite an interesting walk! 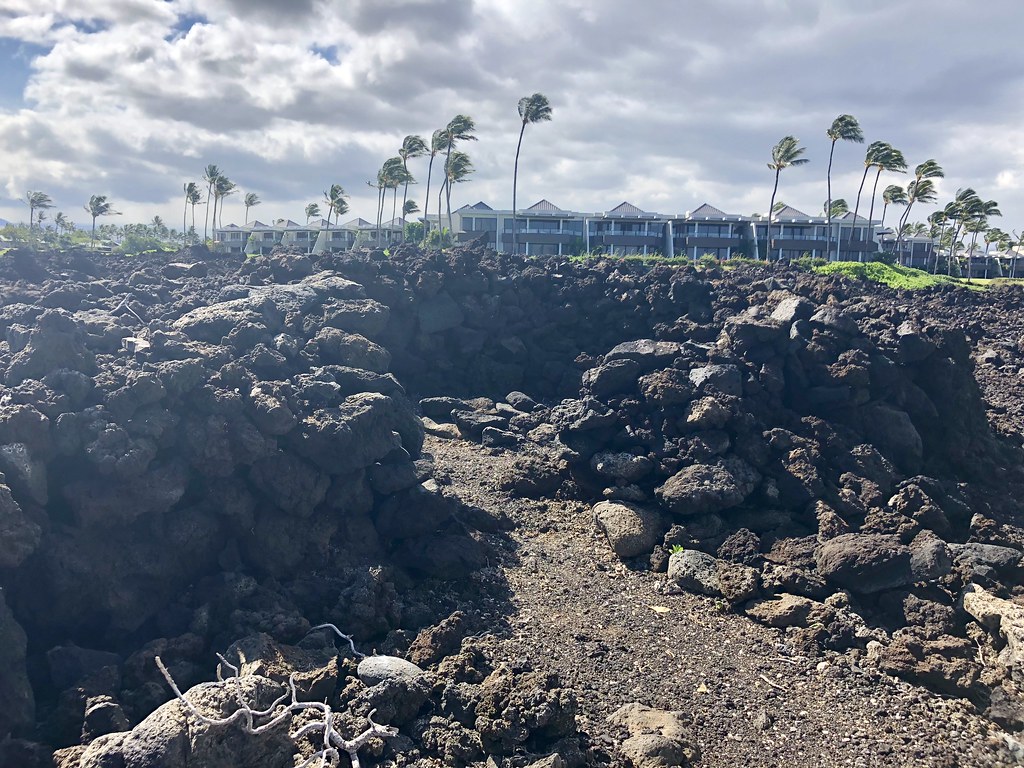 The rest of my first day was spent by the pool. Ahhhhhh! There is a nice shopping center right near the Fairmont so I took a break from my tan and did a little grocery and booze shopping for the week. In the afternoon I was booked for a massage at the hotel's spa. By prepaying my spa appointment when I booked my room online, I got $100 credit for $75. I took advantage of prepaying restaurant visits for the same type of deal. 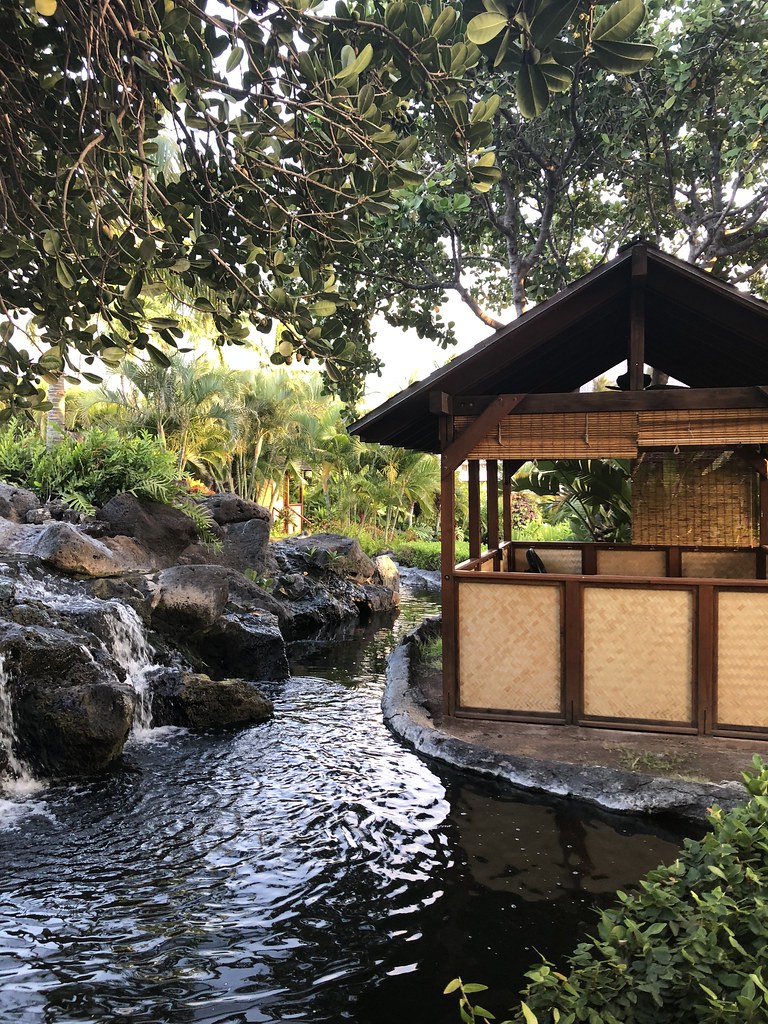 The massage rooms at the spa are individual outdoor huts right on a waterfall/stream. OMG! My room also had a little glass pane in the floor that allowed me to watch fish while I was laying face down. To say that the atmosphere here was amazing would be an understatement. I loved this experience so much that I booked another 3-days later! 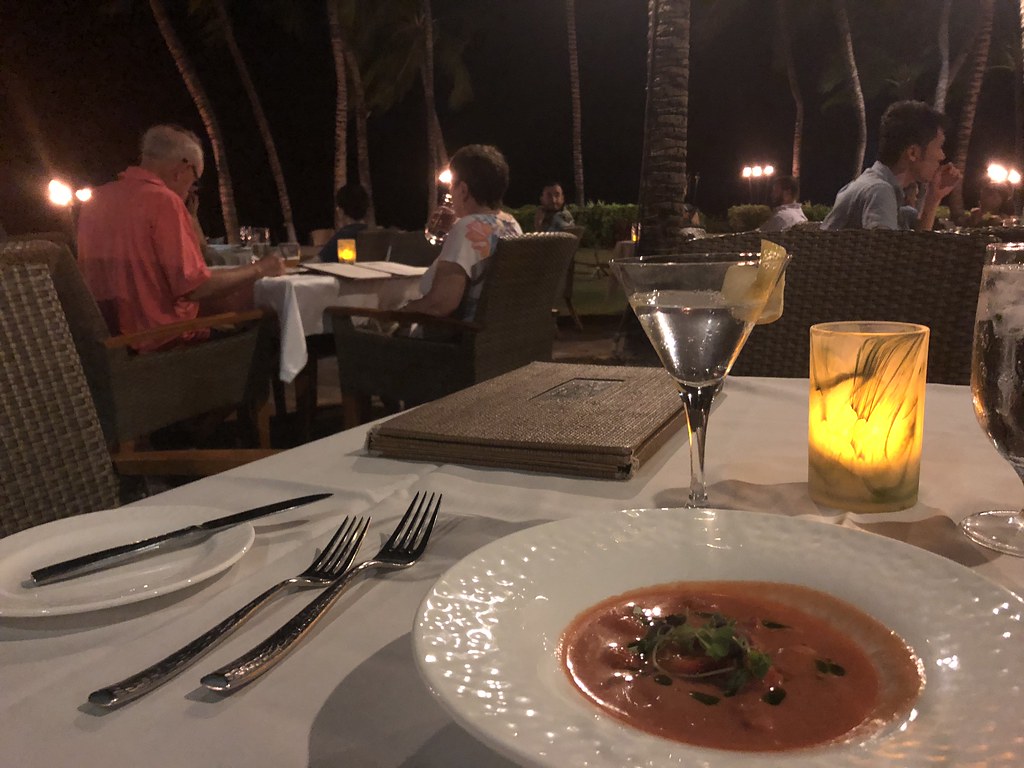 That evening I had dinner at Brown's on the resort, an outdoor restaurant that sits right off the beach. My meal was good, and service was great, but it was very overpriced.

The next morning the hotel grounds were very busy, with lots of very fit people. Turned out that the Fairmont was hosting the Ironman qualifier. There was a lot of good people watching! 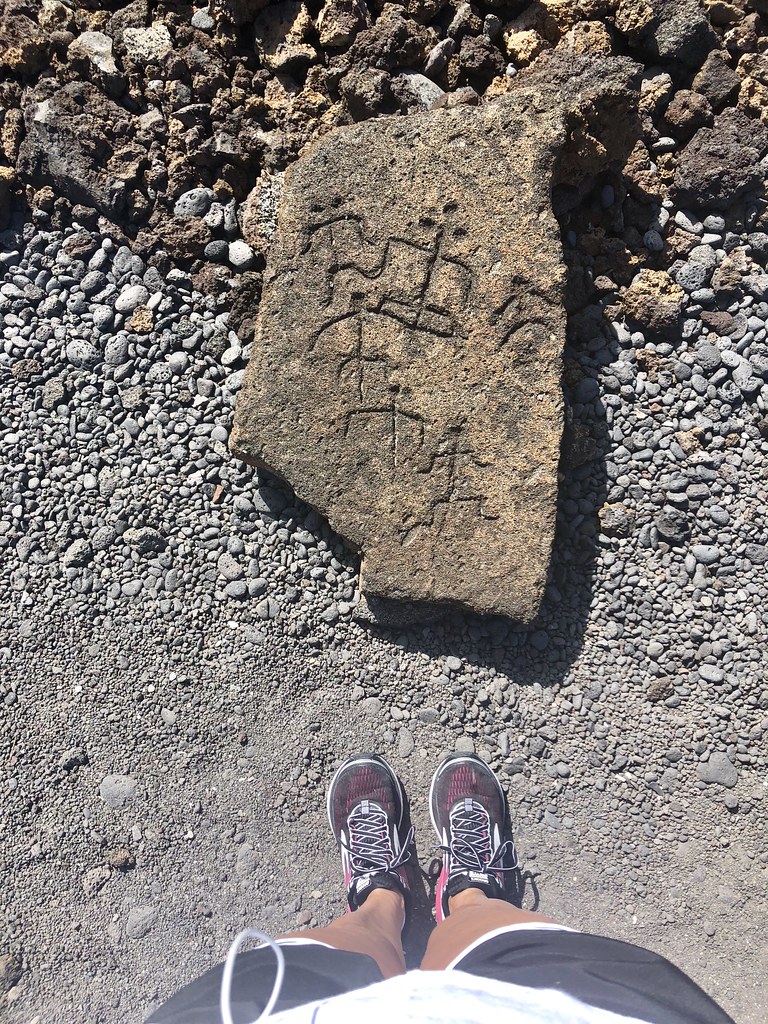 I set out, past all the bicyclists, for a 3-mile hike to the Petroglyph park. There are lava stone carvings as soon as you enter the area, laid out to be viewed, but if you follow the trail, deep into the mesquite forest, you can try to spot them on your own. 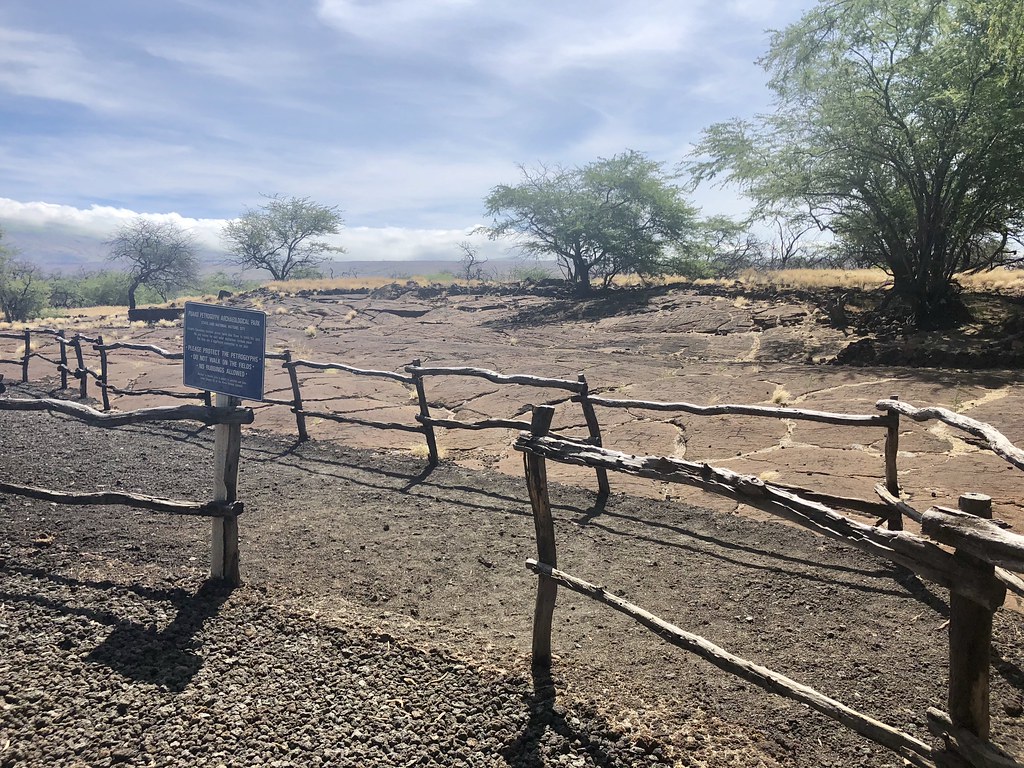 After a while I reached a clearing where flimsy fencing protects large rock tiles of carvings. Wow! These carvings of people and animals date from 1200 AD! I made my way back along the rocky shoreline and treated myself to a pineapple mimosa and pineapple fritters for breakfast! 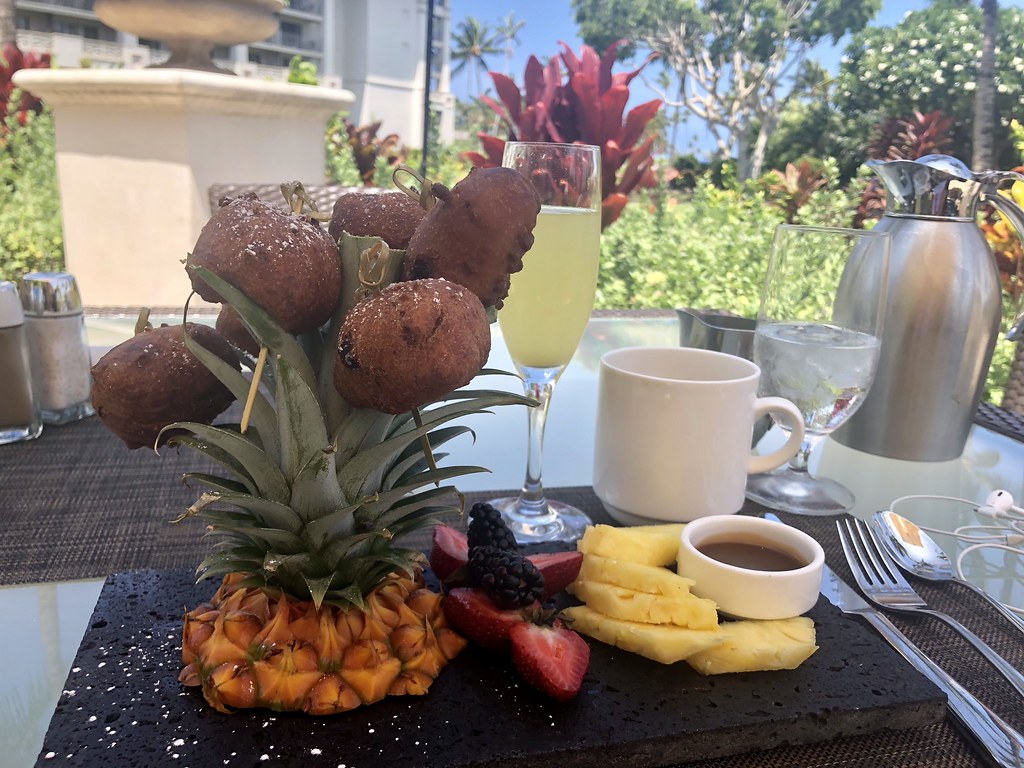 Originally my Big Island vacation plan was to check out of the hotel on this day and head to Volcano National Park to spend a few days hiking around Kīlauea Volcano. Unfortunately for me and the residents of this area, the volcano had erupted and was still very active. With the park being closed and a lot of seismic-activity happening, I decided to cancel my plans and extended my stay at the Fairmont. The hotel was great and kept me in the same room. 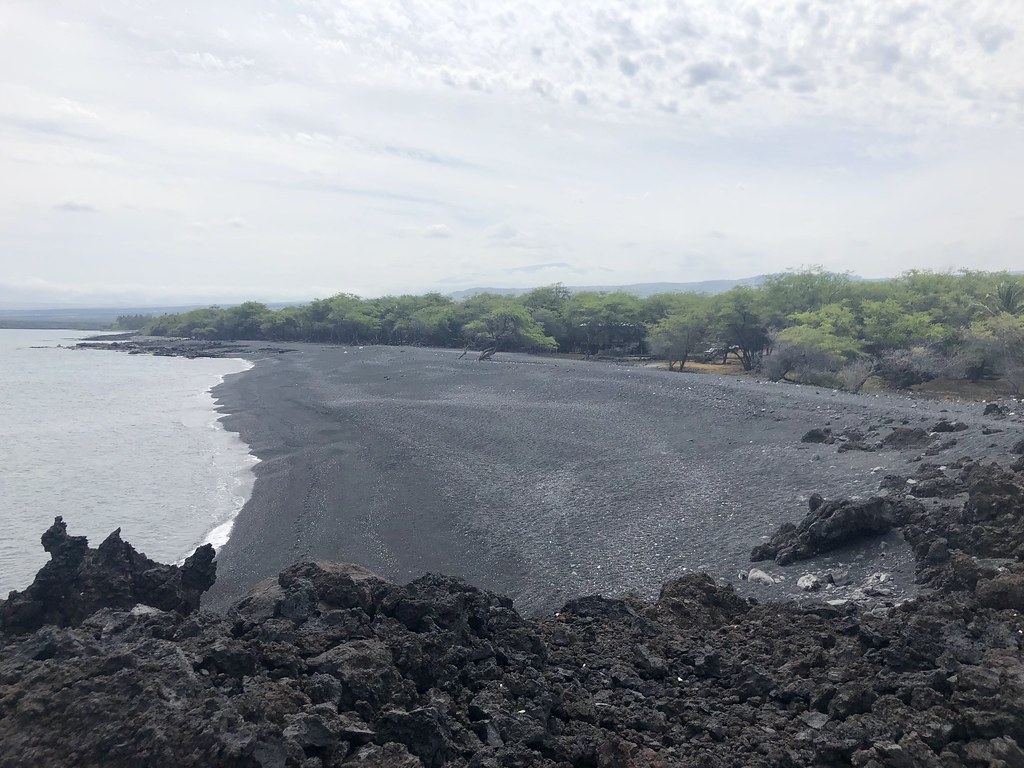 Morning #3, I drove 30 mins south from the resort to do a 3-mile hike at Kiholo Bay. The thing I always forget about driving on the islands, is that the highways can be busy, and turnouts for beaches and trails can be hard to spot. You really need to pay attention to the mile markers and be prepared to turn off onto a dirt path quickly.

I loved this hike! Most of it was on this black sand beach which was stunning. I started at the far south end, and climbed up the lava for a view and also to peek into a few caves. 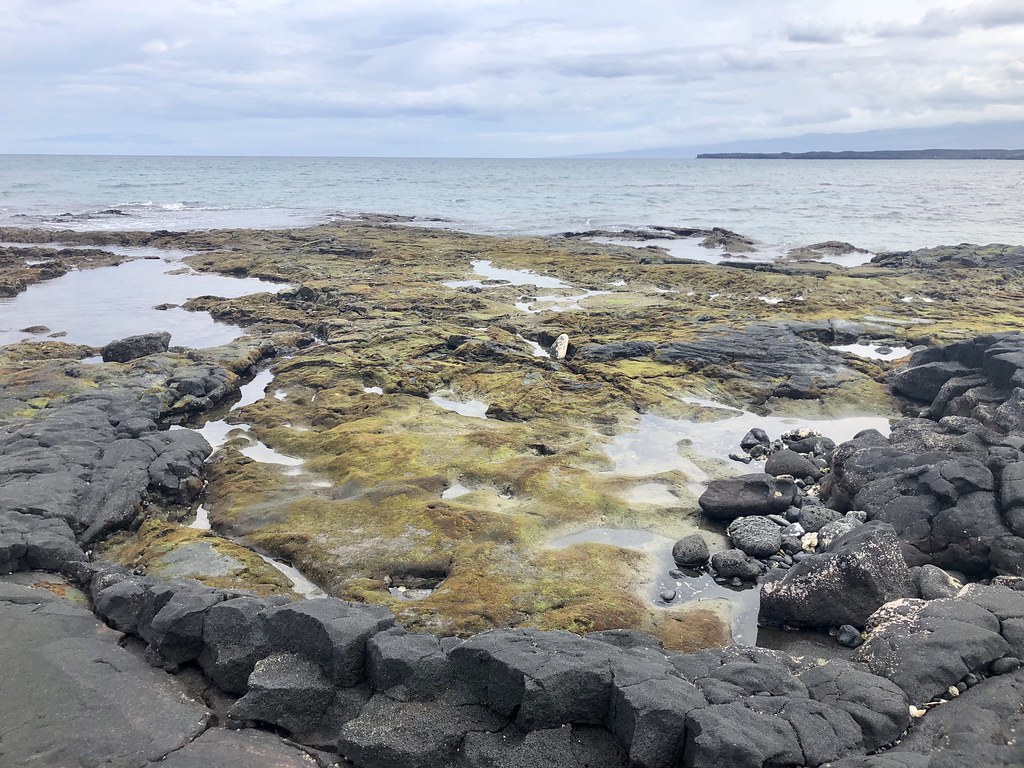 As I made my way north, the beach changed from all black, to black and white. There were huge flats of lava, worn smooth by the surf, hiding tide pools and even petroglyphs. There was no one on the beach when I was there. Normally it's known to have lots of turtles, but I didn't see any that morning.

I finally came upon a very large yellow house, with the proprietor enjoying coffee on his patio. It was Earl Bakken, the inventor of the pacemaker! My trip was in June and Mr. Bakken passed away in October. He had given me a very friendly wave and smile. RIP. 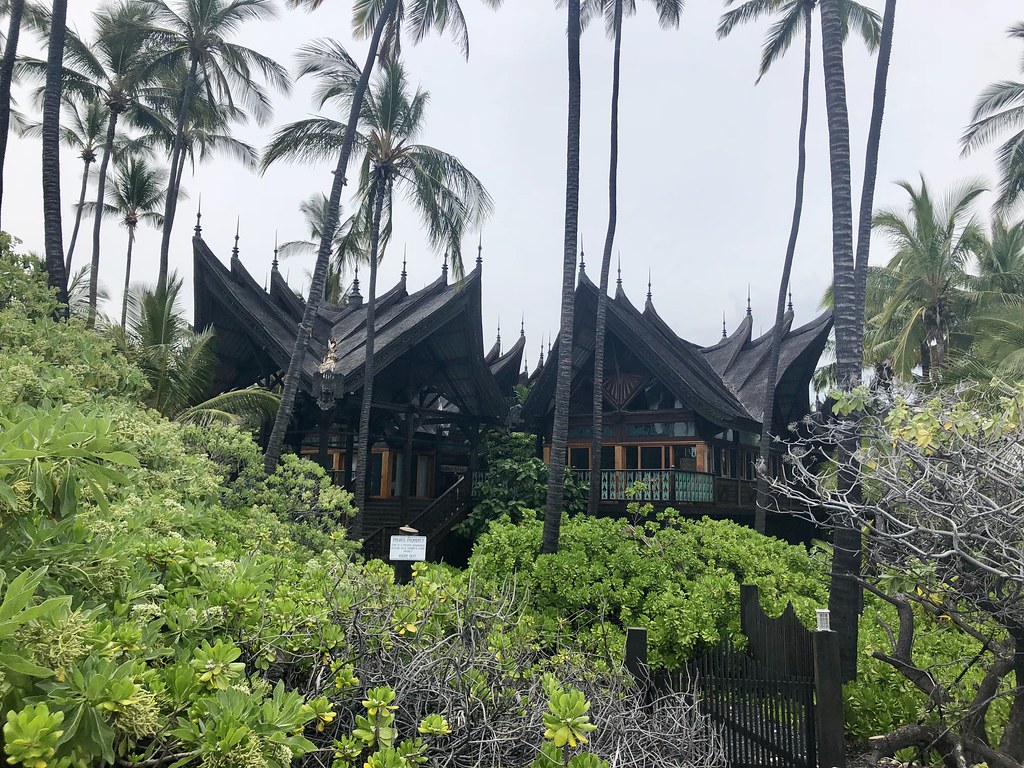 Not to much farther I came upon Bali House, built by the co-founder of Paul Mitchell hair products. Story goes that he had it built in Bali, then deconstructed, moved here, and rebuilt. It's pretty unique looking!

From here I followed a trail away from the beach, I was trying to find the Queen's Bath, a fresh water pool in an old lava tube, but for the life of me I couldn't find it. I did find part of the tube and caves further inland. As well as some friendly feral goats! 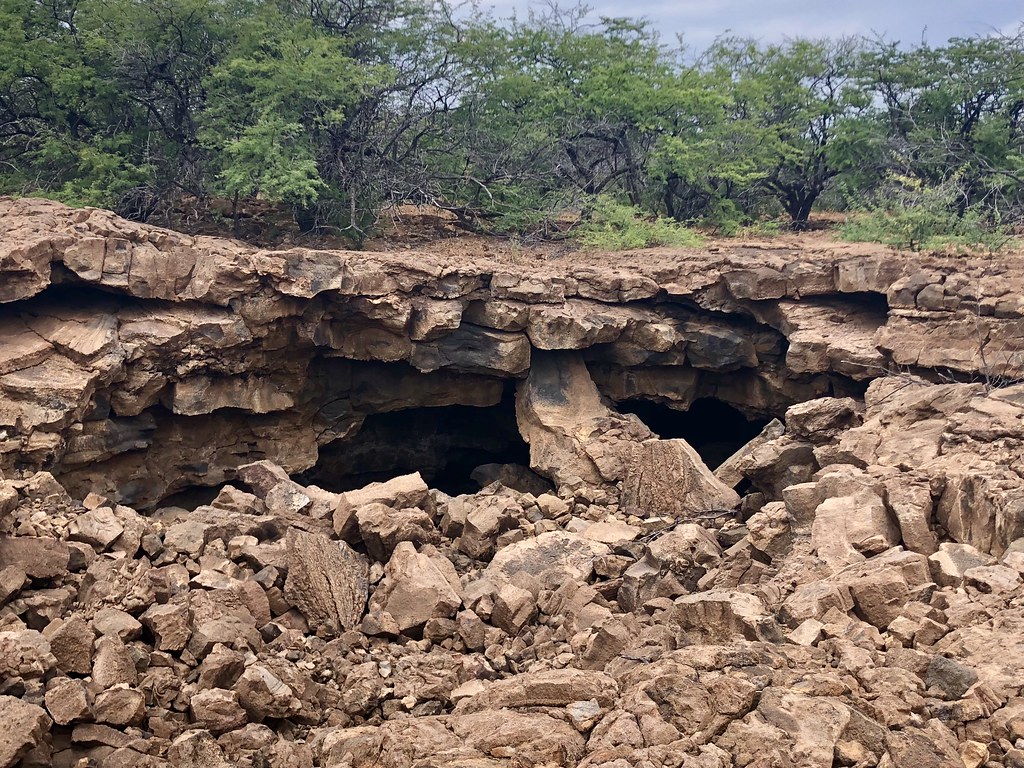 Back at the resort I spent the entire day by the pool. It was heaven! Because of the active volcano the area had a bit of VOG making for a hazy but pretty sunset. 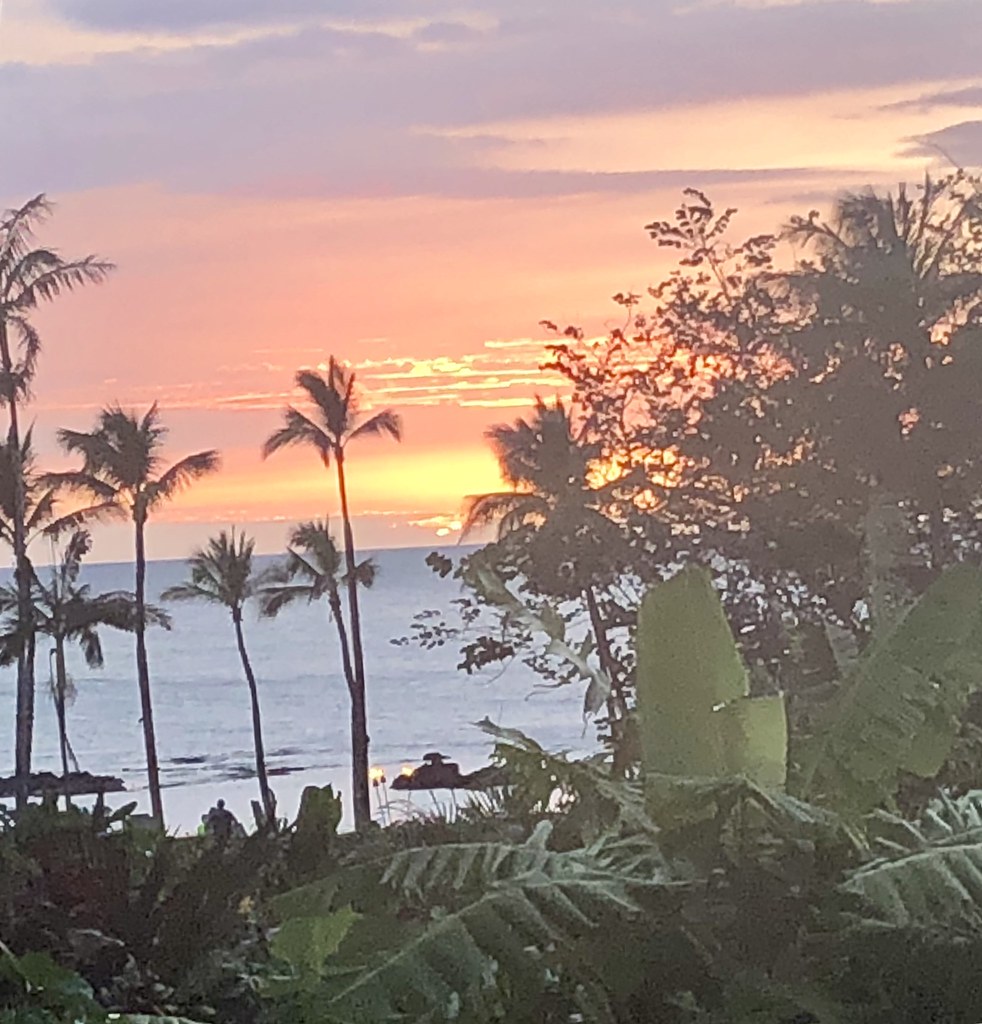 Morning #4, I headed back to the Shore Trail again, but did a shorter 2 1/2 mile round trip. After breakfast (with a breakfast pina colada!) I headed to the Fairmont's beach for some snorkeling. The Big Island doesn't have the same number of sandy beaches that Maui has, but the Orchid is known for their nice beach and protected bay. The snorkeling was fine, typical pretty tropical fish, but I found that I wasn't super comfortable snorkeling on my own so I was only out for about 30 minutes. 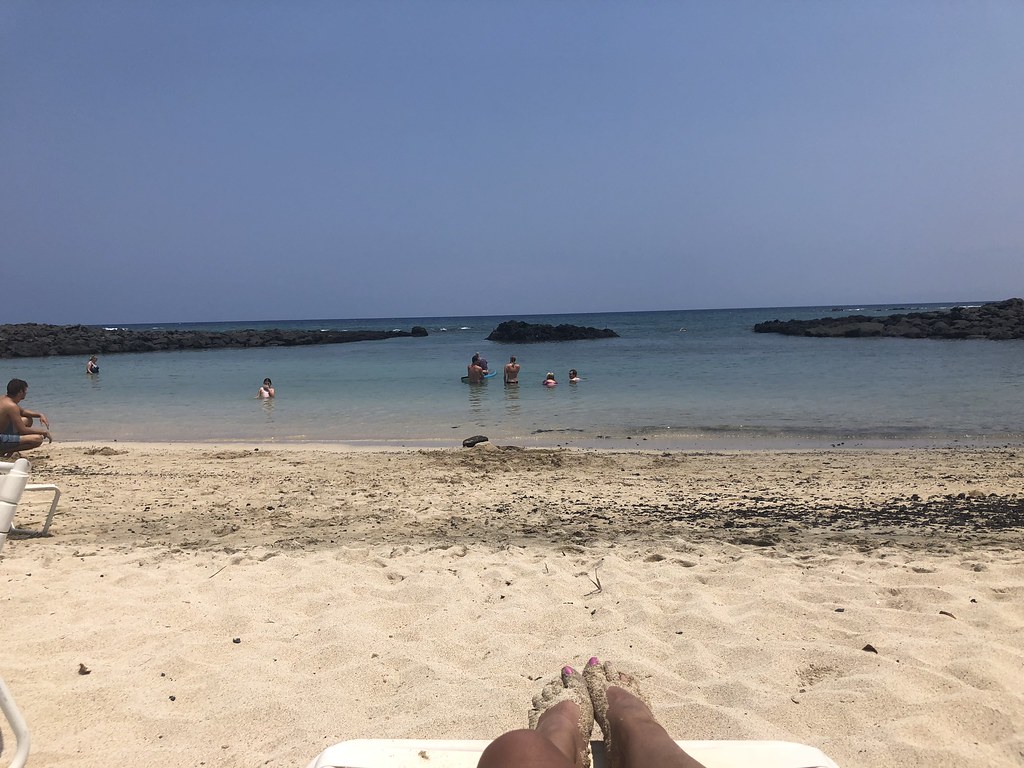 The afternoon pool routine was improved by the Ironman contestants finishing their trials and relaxing with well earned beers, excited to talk about their races. After another full, sun-soaked day, I checked into the spa for another blissful massage in a hut on the waterfall. 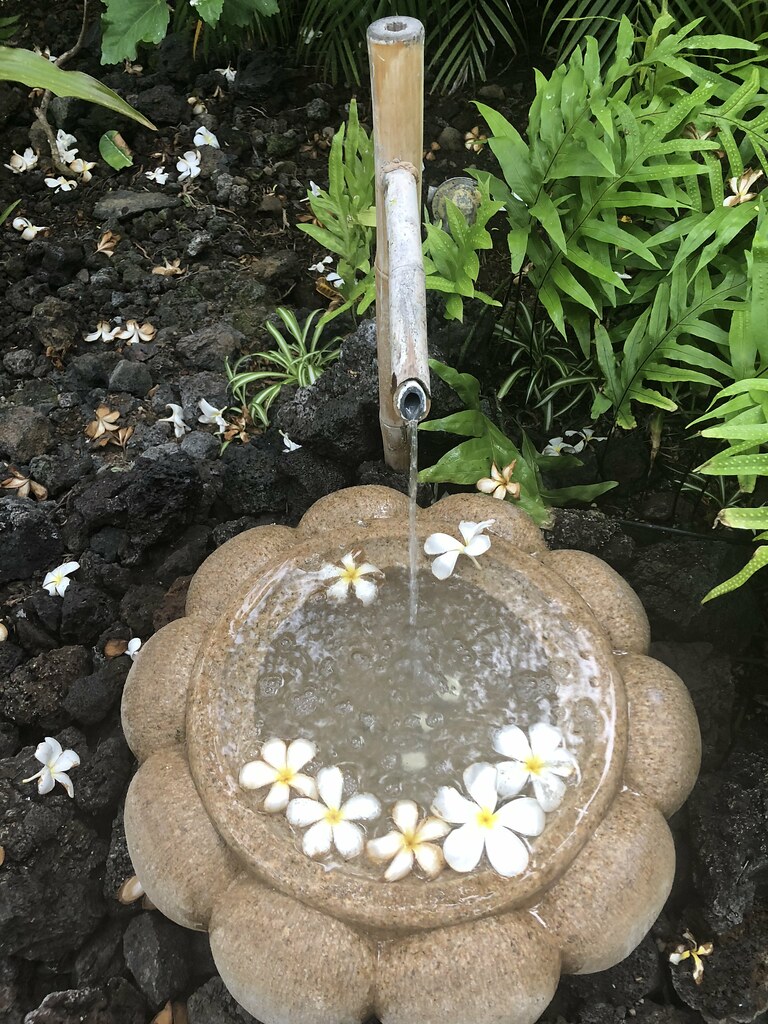 Afterwards, I took the hotel shuttle to the neighboring Mauna Lani resort and had a cocktail in the bar. It seemed like the hotel was practically empty and when I spoke to the bartender he explained that it was getting ready to close, a new owner had purchased it and was going to start remodeling. They also had had a lot of cancellations because of the volcano erupting on the other side of the island. Late 2019 is the expected reopening. 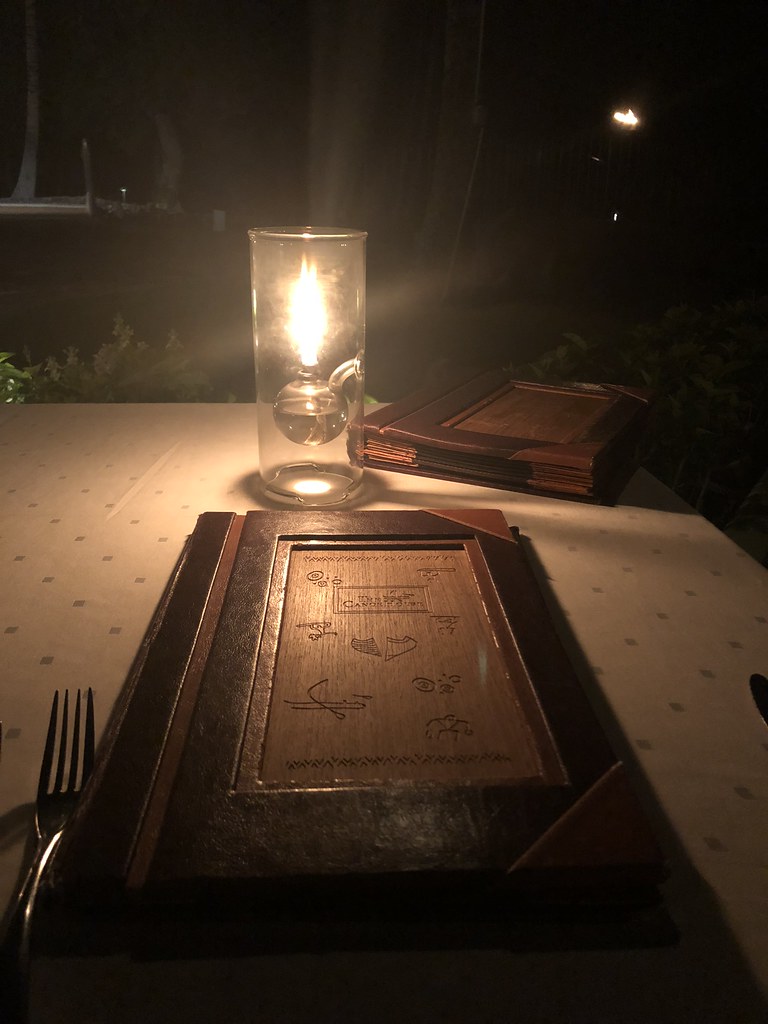 Dinner was outside at the Canoe House restaurant and was lovely. I had passed it multiple times during my walk on the Shore trail, it sits just a stone's throw from the beach, and the sounds of the waves was wonderful. My food was great as well, but that's a moot point with it being gone.

On my last full day of vacation I skipped my walk, slept in, and woke up to a message from Alaska Air that I had been upgraded to First Class for my flight home! Fantastic!

I arranged with the hotel to borrow a picnic basket filled with ice, picked it up and went to Foodland in the nearby shopping center for, from what people told me was, some of the best poke on the island. They weren't wrong! 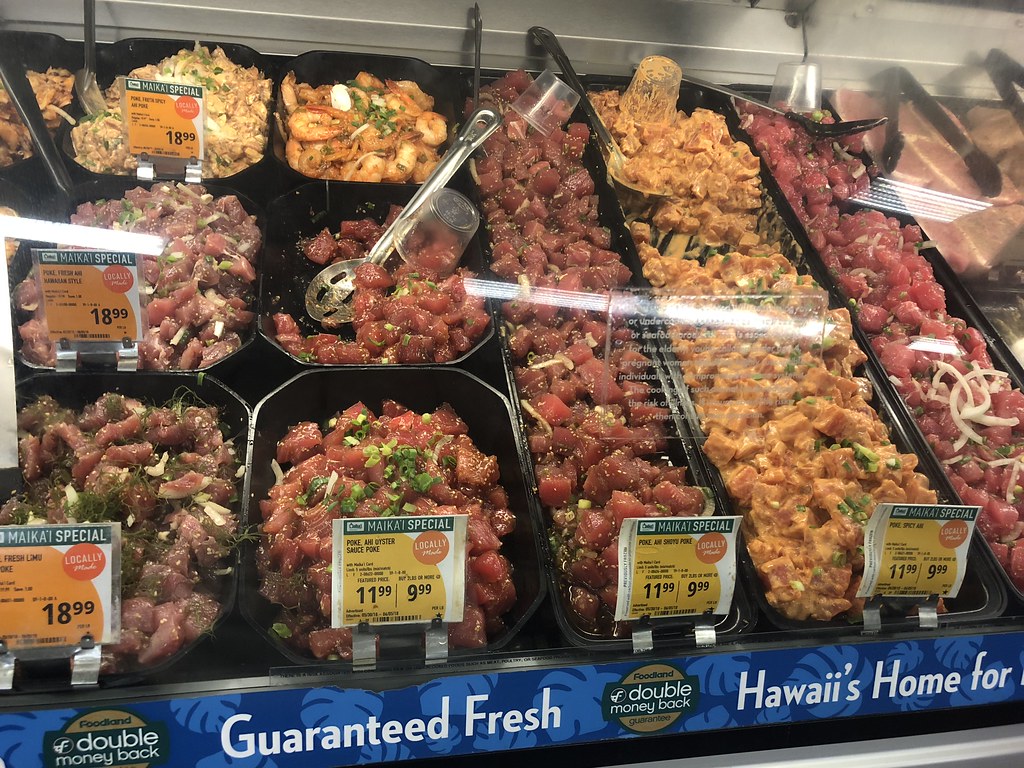 There were soooo many choices, and by the time I finished with their free tastes I was almost full! I  bought a couple, along with some edamame and Hawaiian mac salad. I added these to my cooler of ice, water, and rosé and off I went. Destination Hapuna Beach. 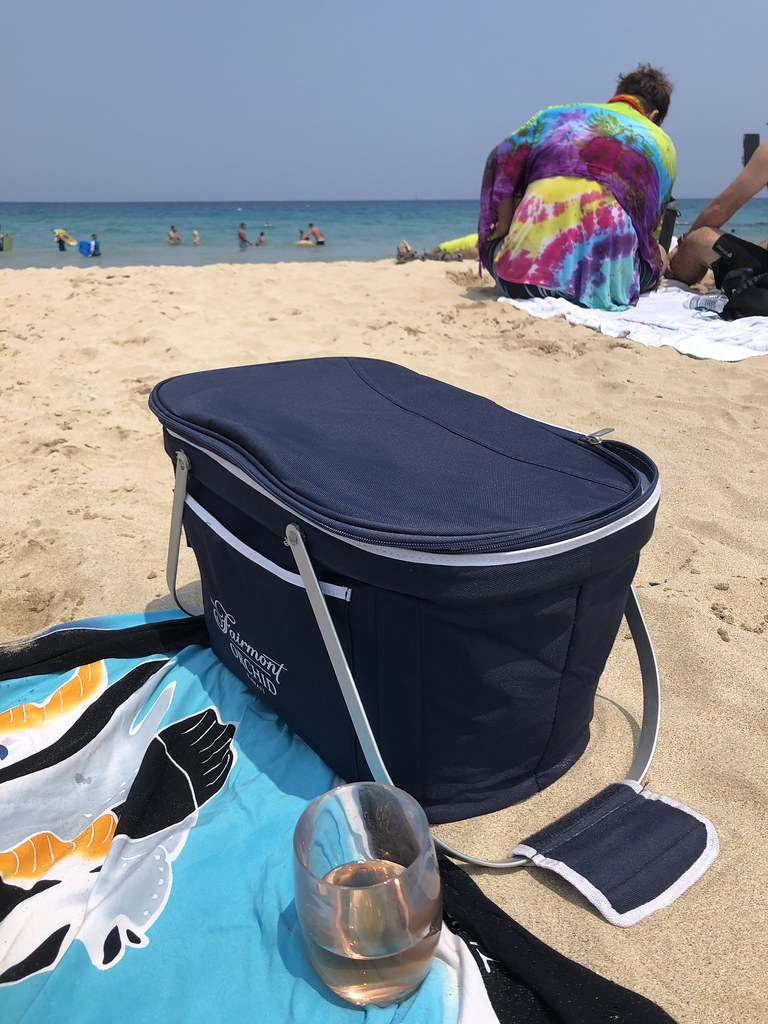 It was a gorgeous day to spend at the beach with my picnic, the water was so calm and warm! This beach is really large too, so it doesn't feel crowded with room for everyone.

I was back at the Fairmont in time for a last Happy Hour Mai Tai and a dip in the pool. 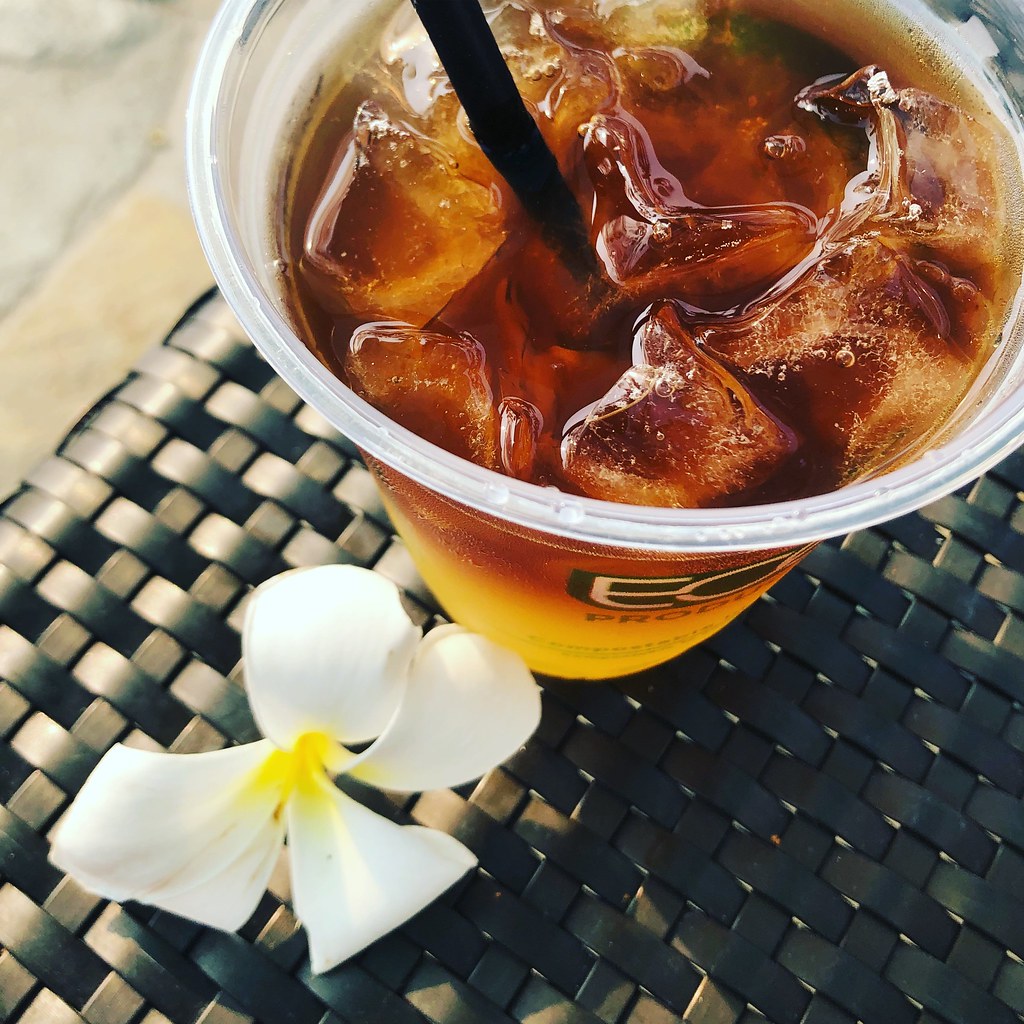 The VOG on this night was worse than before, it didn't affect my breathing or eyes, but it sure looked eerie as the sun started to set! 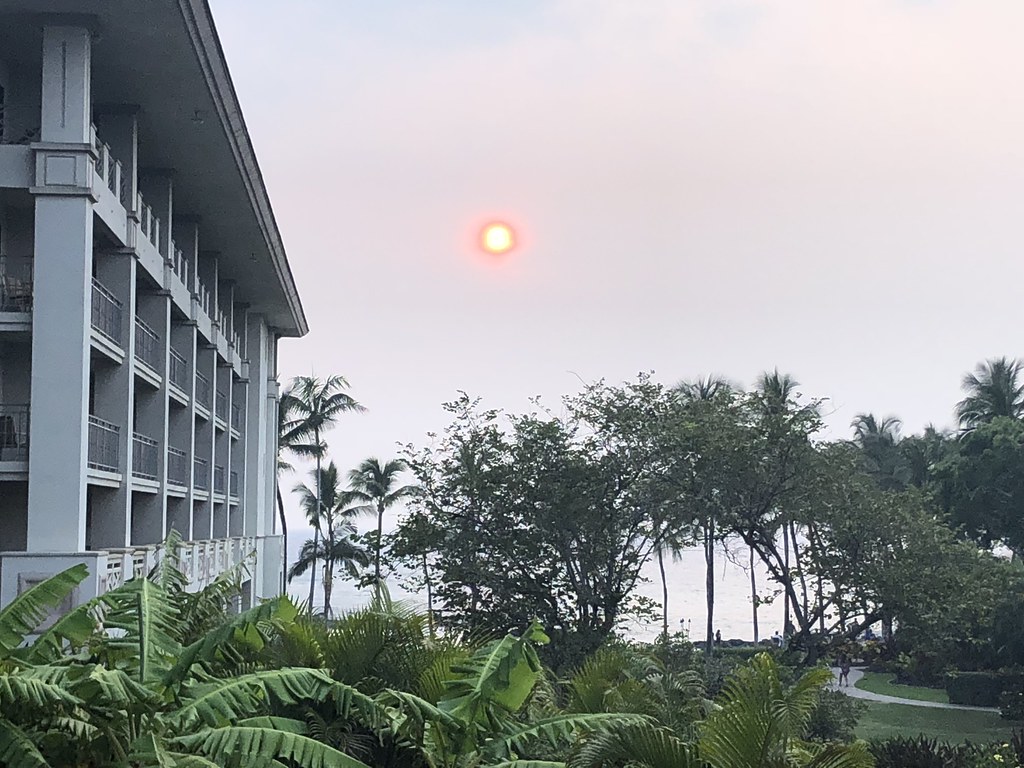 That night I took the shuttle again, this time to the restaurant Napua, technically on the Mauna Lani property but not part of the hotel. They gave me a fantastic table, looking right out onto the bay. And the service was exceptional, with owner Brandon coming to sit and chat with me, and my server bringing me a gratis dish and pouring extra wine. 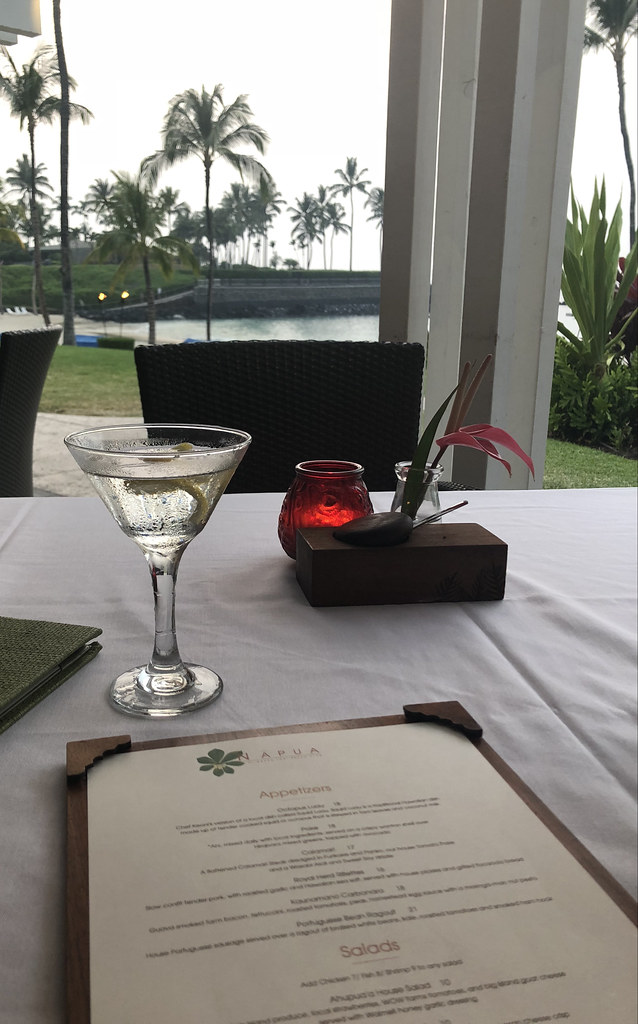 And the food was delicious! Actually the best I had on the island, outside of my beach poke. I'd highly recommend as they are mainly using ingredients within 50 miles of the location. They are also open for lunch, which I have on my list for next time!

The next morning I only had time for a quick cup of coffee while taking in one last view from my lanai before packing the convertible for one last drive to the Kona Airport. 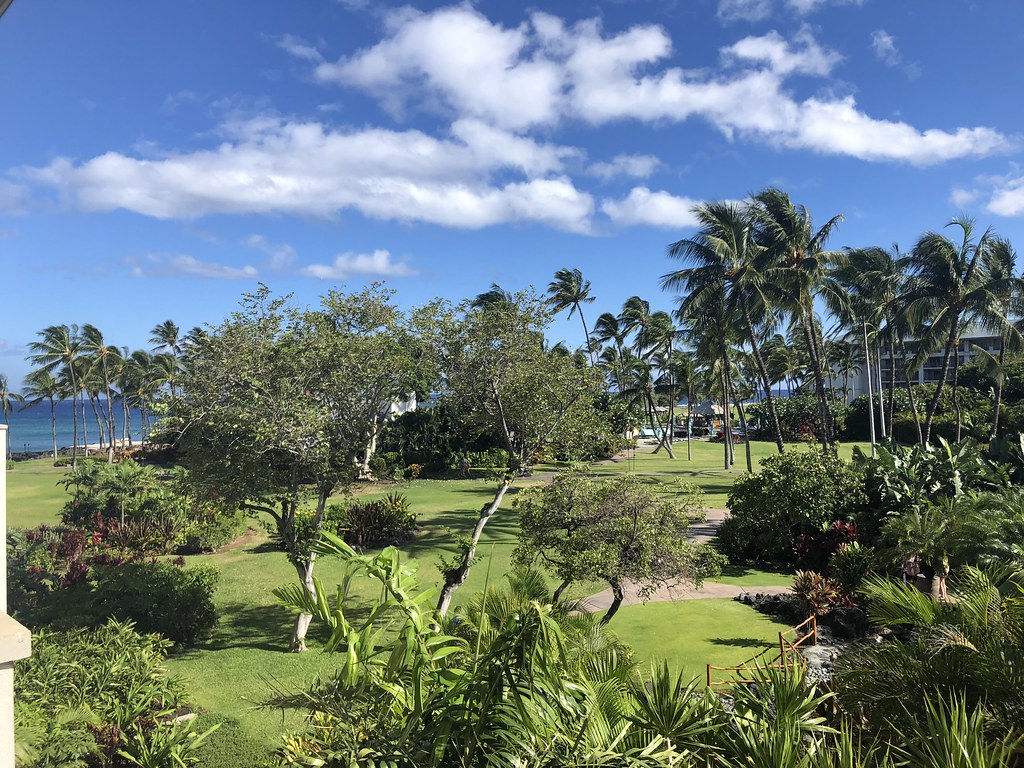 There was no traffic on the way, but the lines at the airport to check in and drop bags were really really long. I only had time for a quick pineapple mimosa before boarding. Good thing I was in First Class!

I'm hoping that the lava flows again at Volcanoes National Park, but that the mountain itself stays quiet. I'd still like to get back and hike that area. But I'd also go back to the Fairmont Orchid any day! I absolutely loved the property and the service. Mahalo!

Other post from this trip:
Dear Greg, Wish You Were Here, xo Hawaii
at February 04, 2019