Dec 31, 2017 we checked into the beautiful Pavillon Hotel, a recommendation from a friend, and a great one at that. We entered the gate off the busy road into a lush and tranquil garden with two beautiful pools, a spa, a restaurant, and bar. 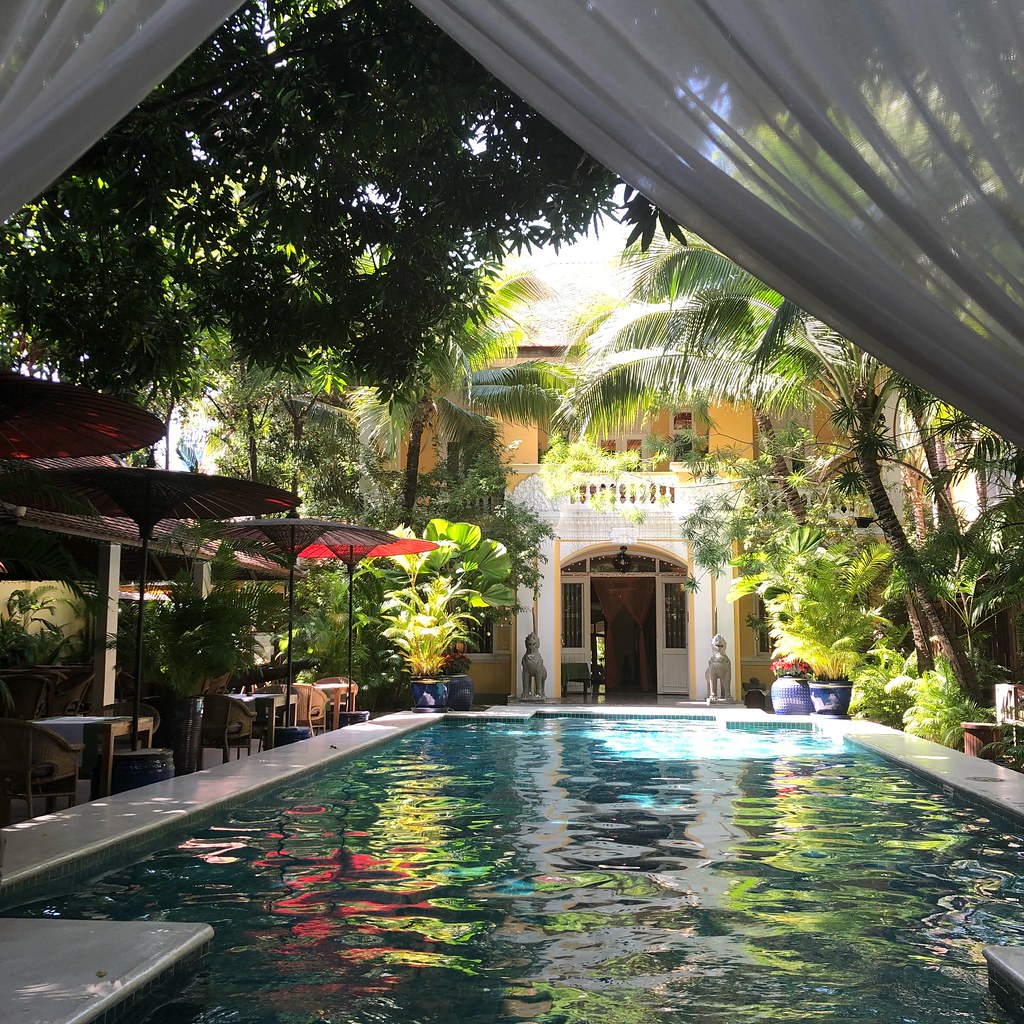 We were greeted with cold towels and refreshing juice before being shown to our rooms. Caitlin and I had a big suite with a king sized bed outfitted with mosquito netting. All the spaces were fantastic! 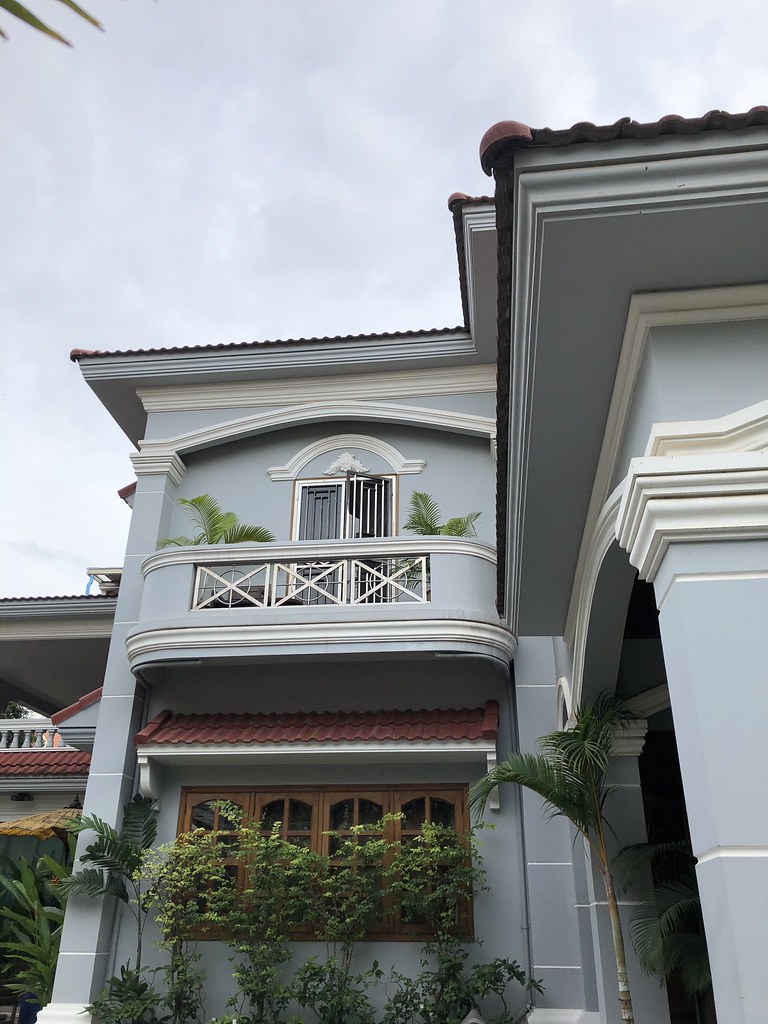 We were waiting to hear if our friend James was going to be able to come into the country and join us for the New Year's Eve celebrations. We decided to spend the afternoon at the pool with a few bottles of wine, sunning and swimming. It was about 5pm before he texted that Cambodian officials would not accept his passport, as he was 3 days short of having a full 6 months left before expiration. This was a huge bummer! James ended up flying home while we got ready for the evening's festivities. 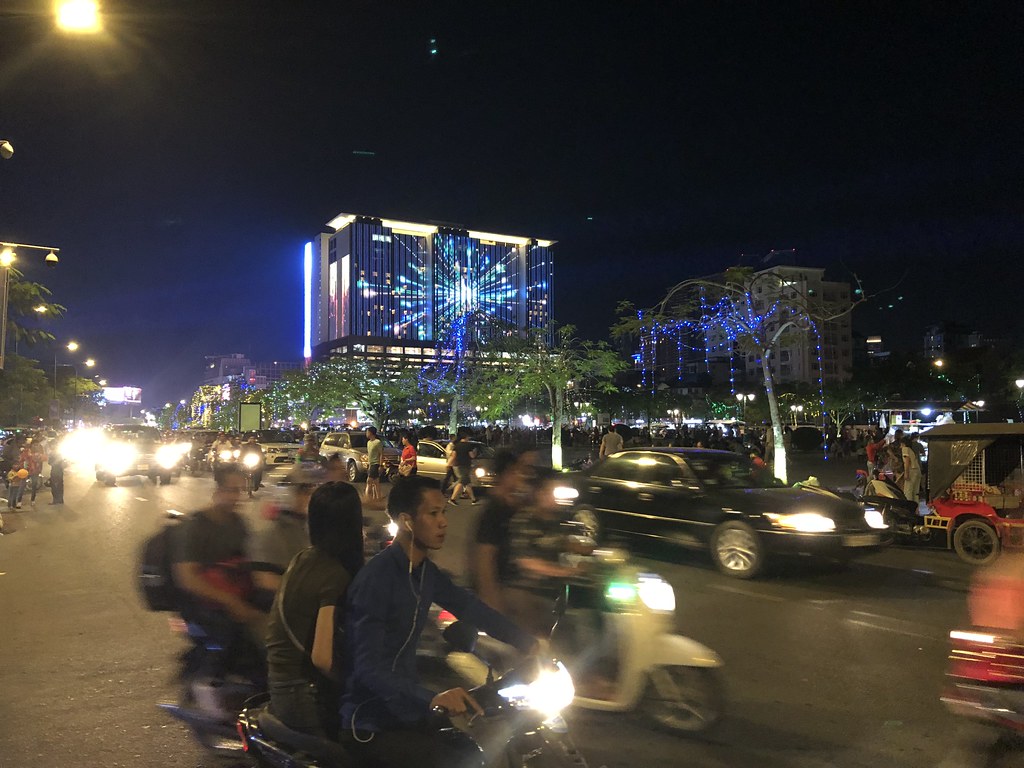 We started with champagne on Forest and Thibault's balcony and then had a few drinks at our hotel bar which was having live entertainment.

Unlike in Vietnam, here there were many tuk tuks for getting around town, so we all piled into one and set out for Wat Botum Park and the nearby Independence Monument. It was already busy with street vendors and people getting ready for the firework show. 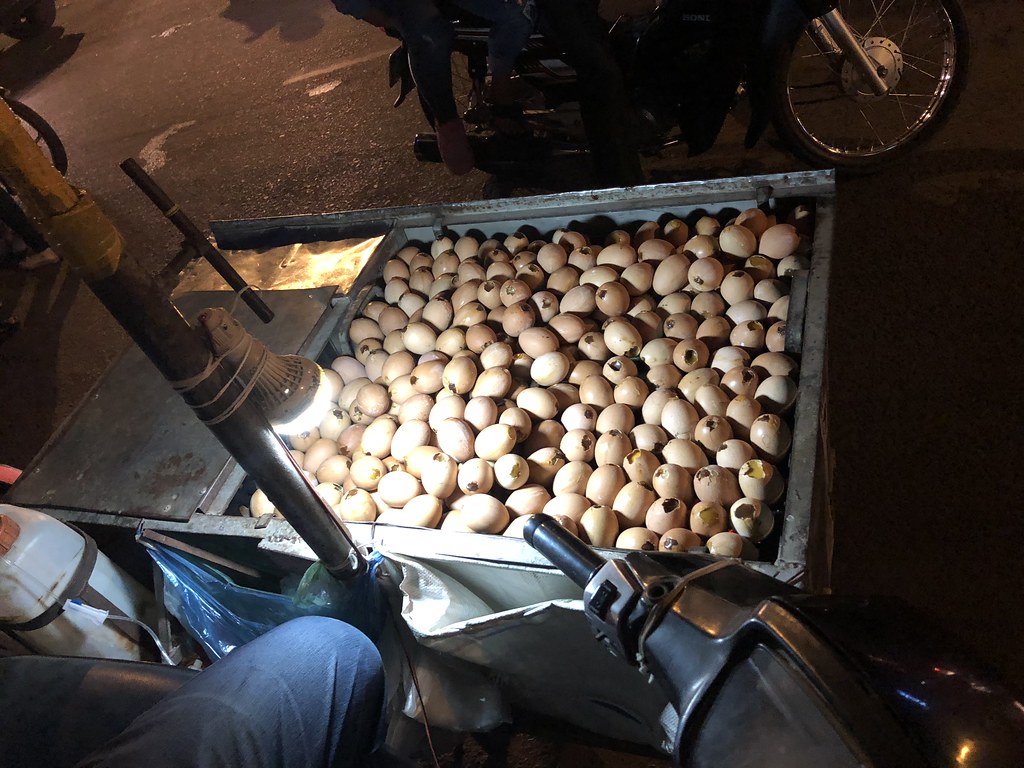 We had dinner at Malis which had a special $60 tasting menu for NYE including wine pairings.  Our 4-course meal was good with a nice shrimp and pork salad, soup with tamarind, roasted quail, and banana ice cream. Our main disappointment was that there was a lovely outside courtyard dining area but we were only able to sit inside. 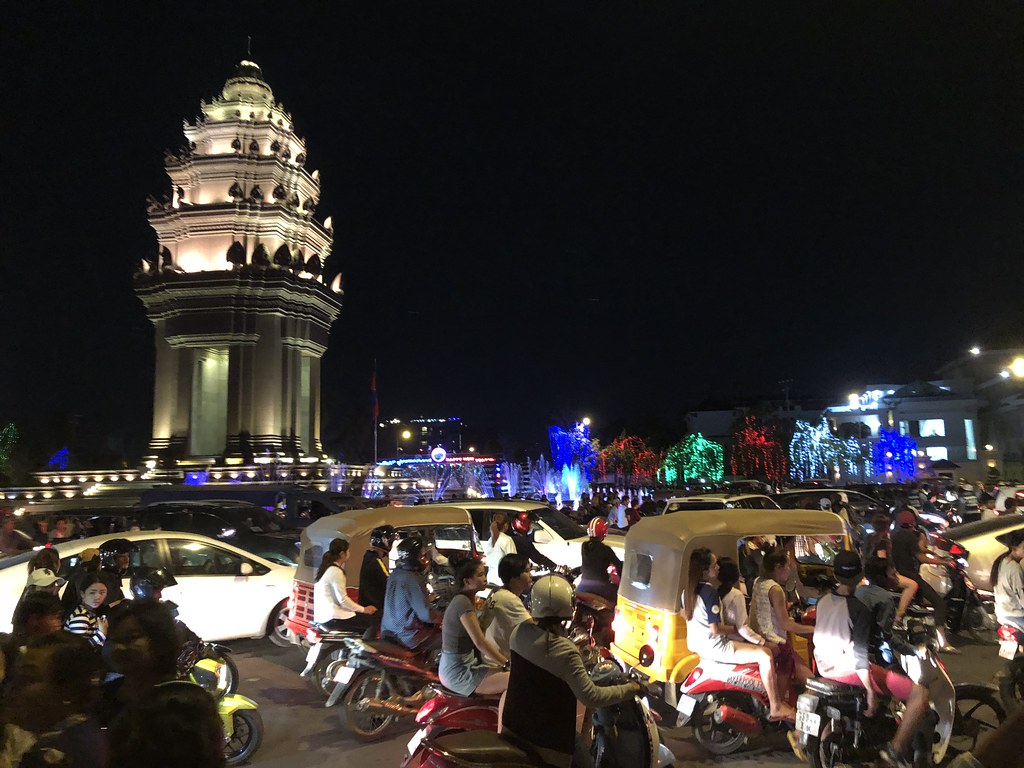 After dinner we joined the revelers back out at the park for fireworks. We weren't really expecting much but it was a pretty good show! Happy 2018!!! 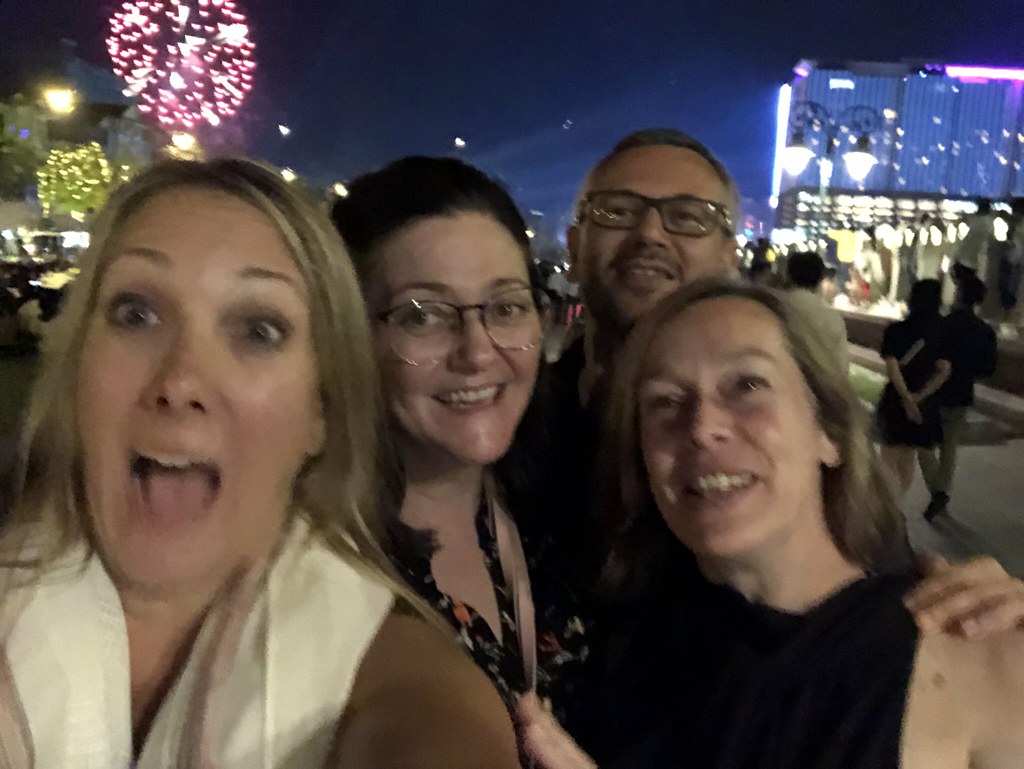 Breakfast was included with our room reservations so we all met outside at the hotel restaurant the next morning. There were fresh breads, fruits, eggs, and fried rice. It was all delicious! 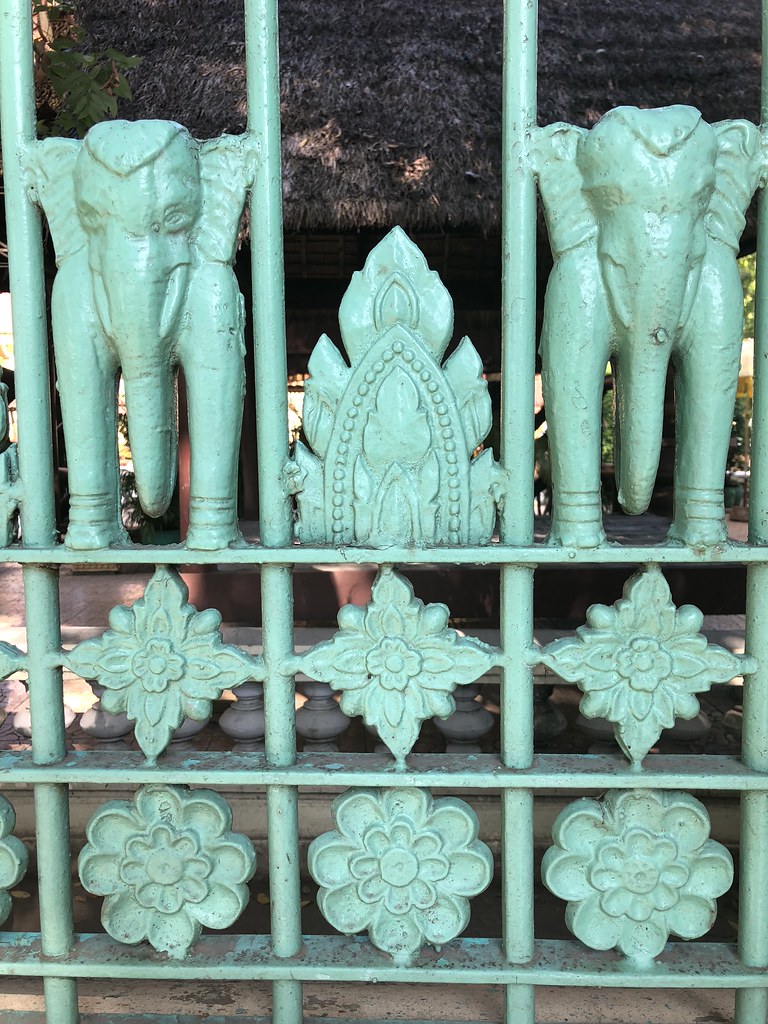 Caitlin and I spent the morning exploring the Royal Palace and Silver Pagoda complex . The grounds are absolutely beautiful and even though there are many resemblances to the Grand Palace in Bangkok, it is much smaller and more intimate. 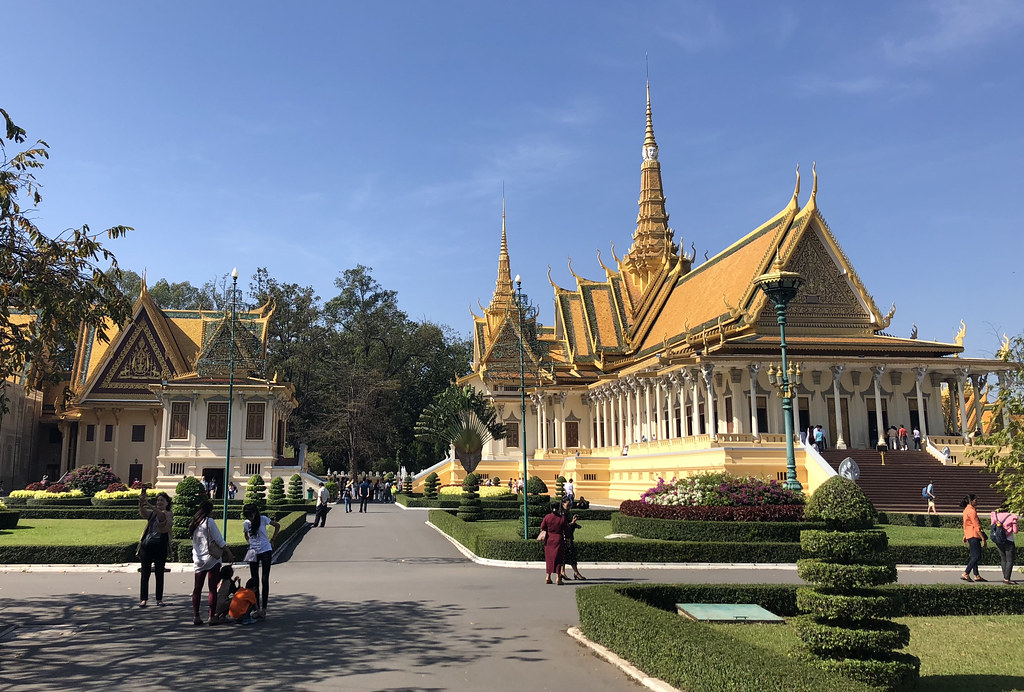 Besides the temples, there are various exhibits depicting everything from royal history, uniforms, musical instruments, and palanquins. 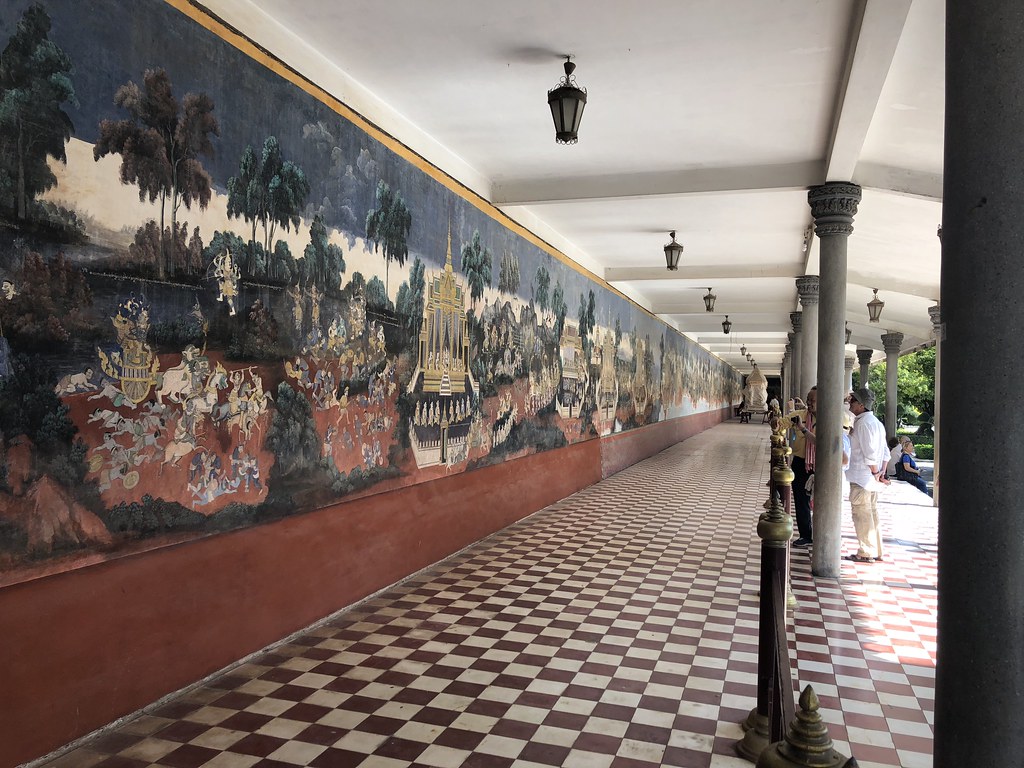 We had a great time exploring, and it wasn't busy at all which was nice. It was however extremely hot so when we were finished we headed back to our hotel with our pool in mind. Walking back we passed lots of street vendors setting up for lunch. We also passed what seemed like an entire street lined with tables of meat drying out under the sun! 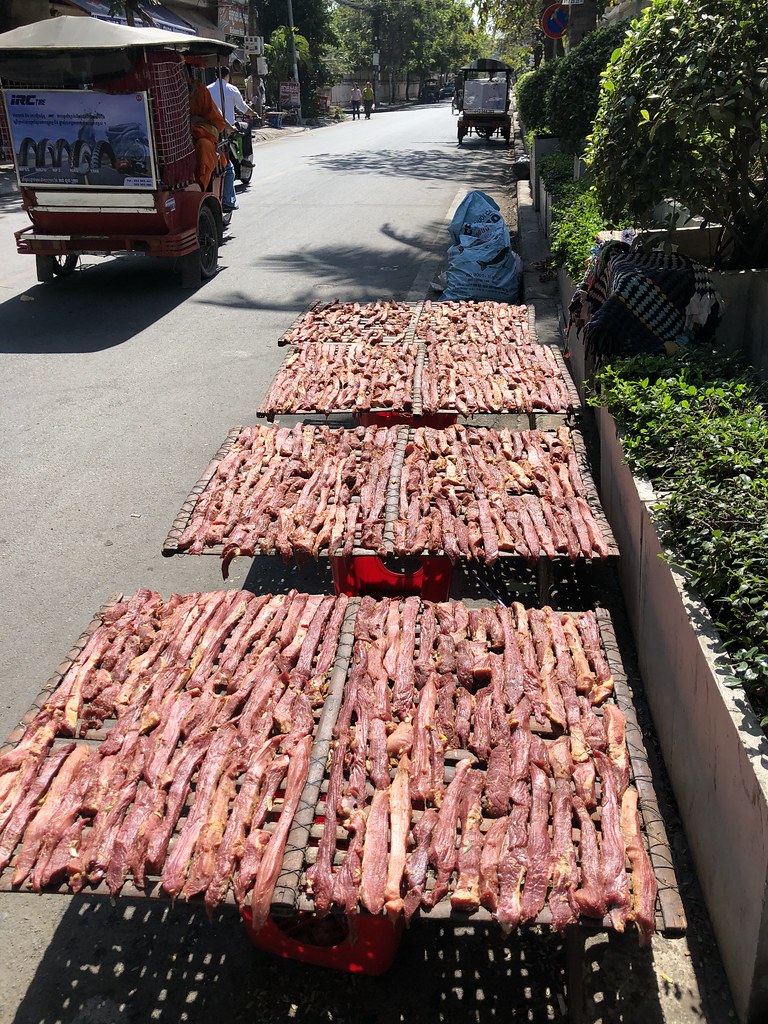 It was so nice to have lunch in the shade of the trees and next to the pool. And my spring rolls and spicy herb salad were both delicious! 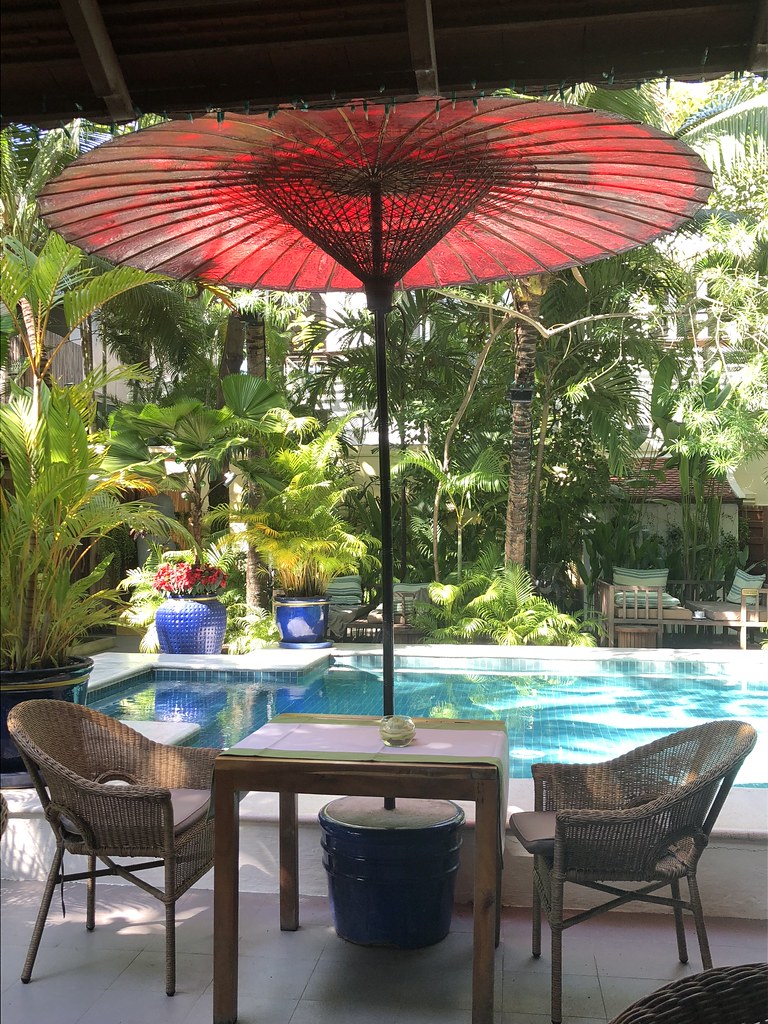 Besides breakfast, our reservation also came with complimentary foot and back massages at the hotel spa, so that is where I headed next! Absolutely a fantastic day; sightseeing, swimming, spa'ing!

In the evening we did a bar crawl around town. First up was a tuk tuk to the Elephant Bar at the Raffles Hotel. 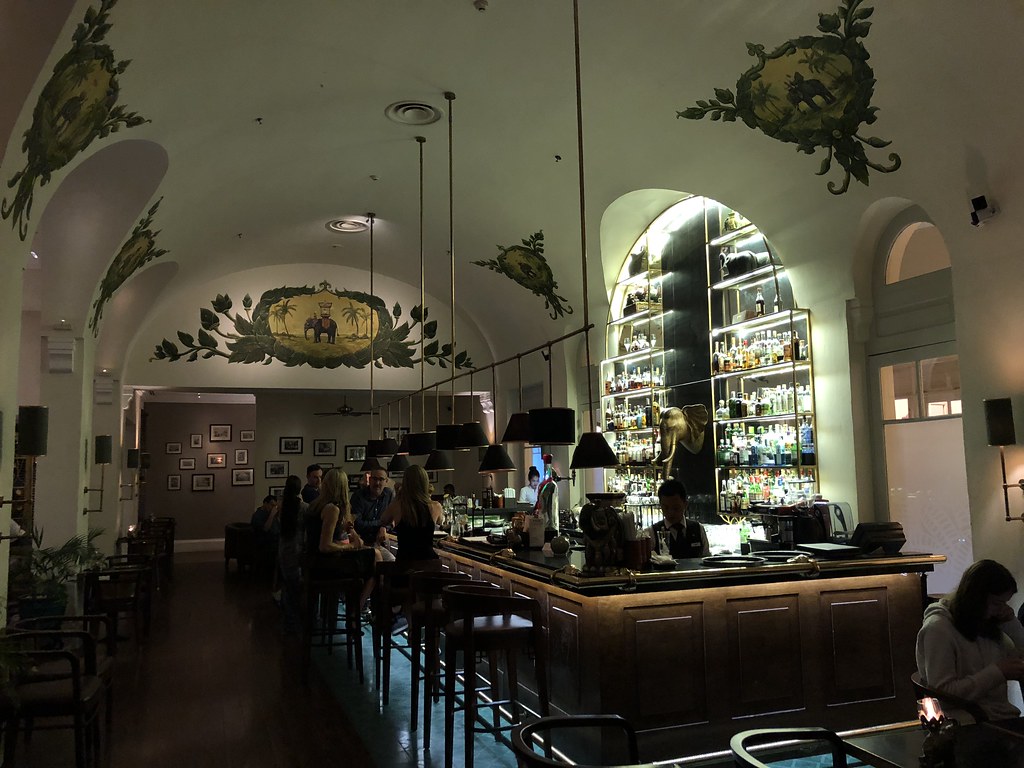 The bar is gorgeous and the drink list was really fun. They have 30+ gins, which is a very big selection for SE Asia, but sadly they were out of the Raffles Gin made for them by Sip Smith. I survived anyway!

From here we walked past the American Embassy, decorated with Christmas lights, and Wat Phnom, the highest point in this very flat city. The wat was closed for the night be we could still explore the grounds (for a fee). 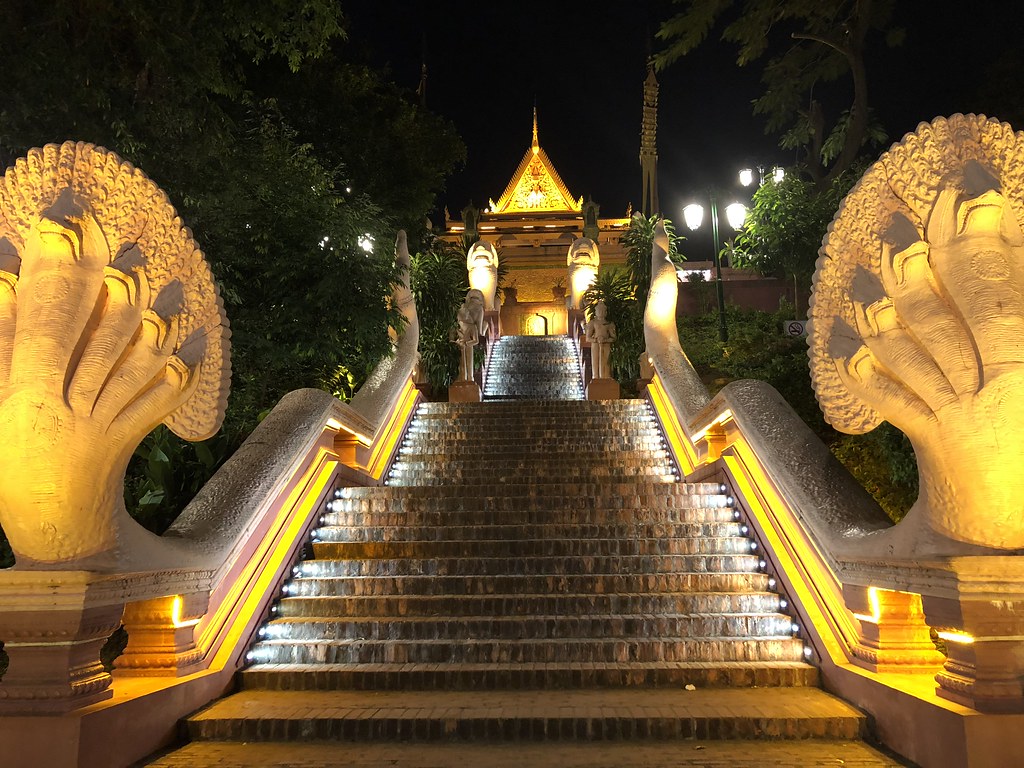 While Caitlin and Forest headed off to our next cocktail stop, Thibault and I walked past street vendors selling shellfish, grilled frogs, steamed buns, noodles, etc. We decided on bao and noodles :) 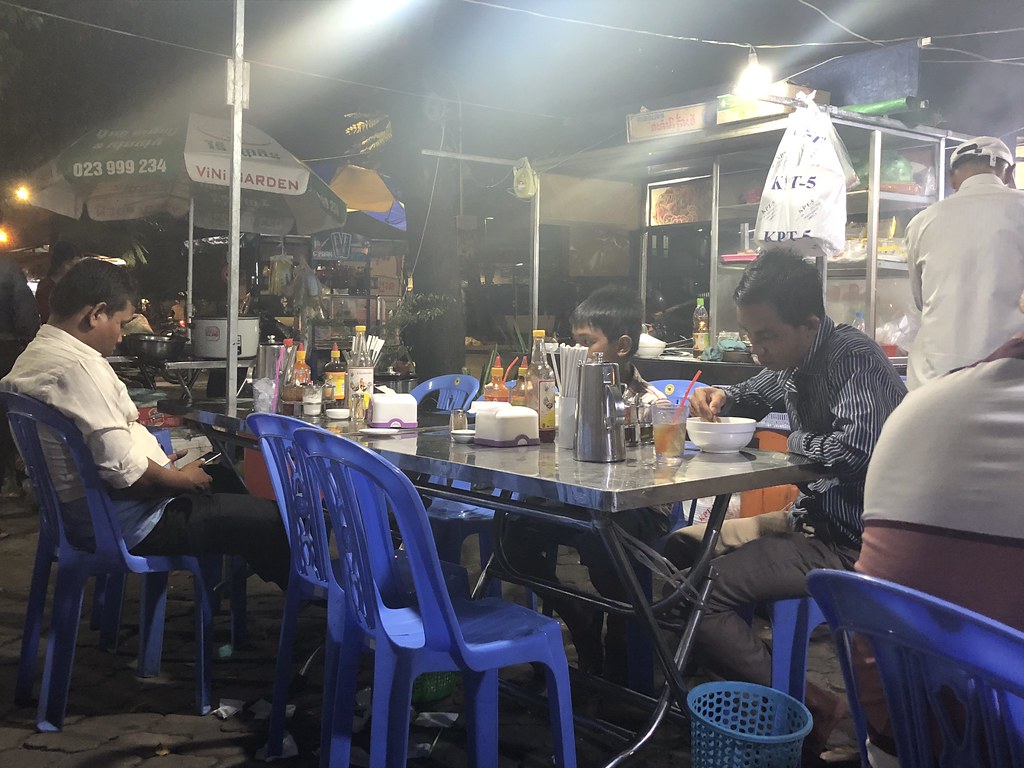 We met the girls at Chinese House, which had both a very cool inside space as well as a great outdoor space with tables, couches, and a Budha. We chose to have our drinks outside! 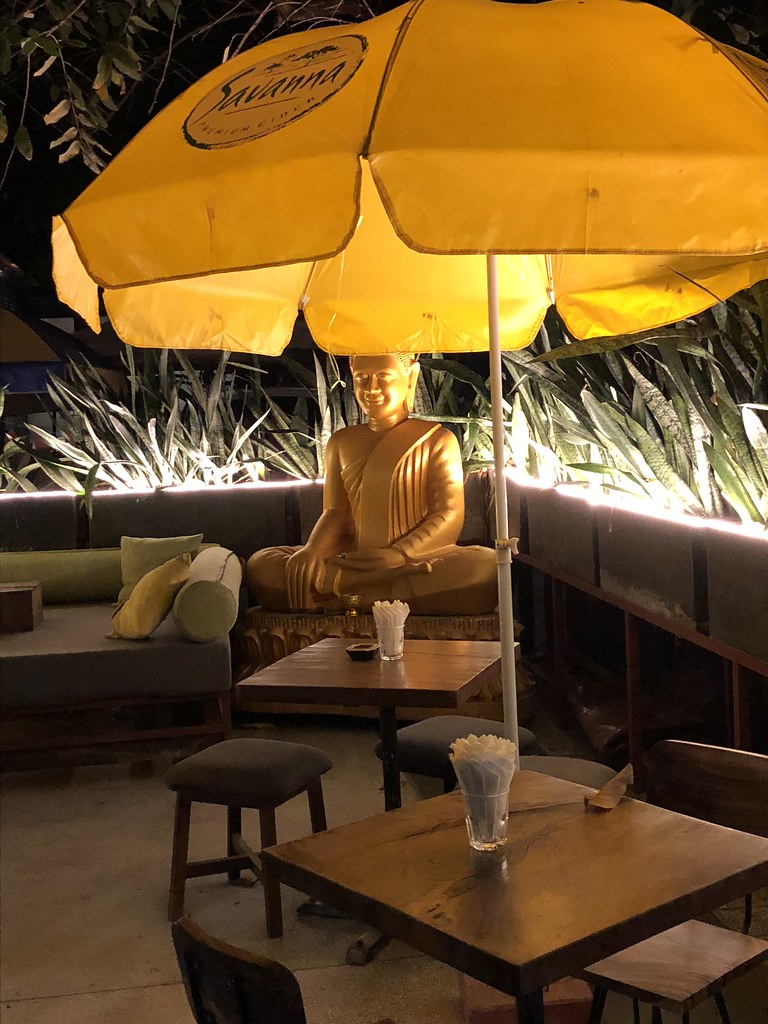 Our last stop of the evening was also the most Western in style. Le Boutier has a really interesting cocktail menu that tells stories about Cambodian music, the family the bar is named after, favorite locals, etc. It's fun and playful and most importantly serves great drinks. 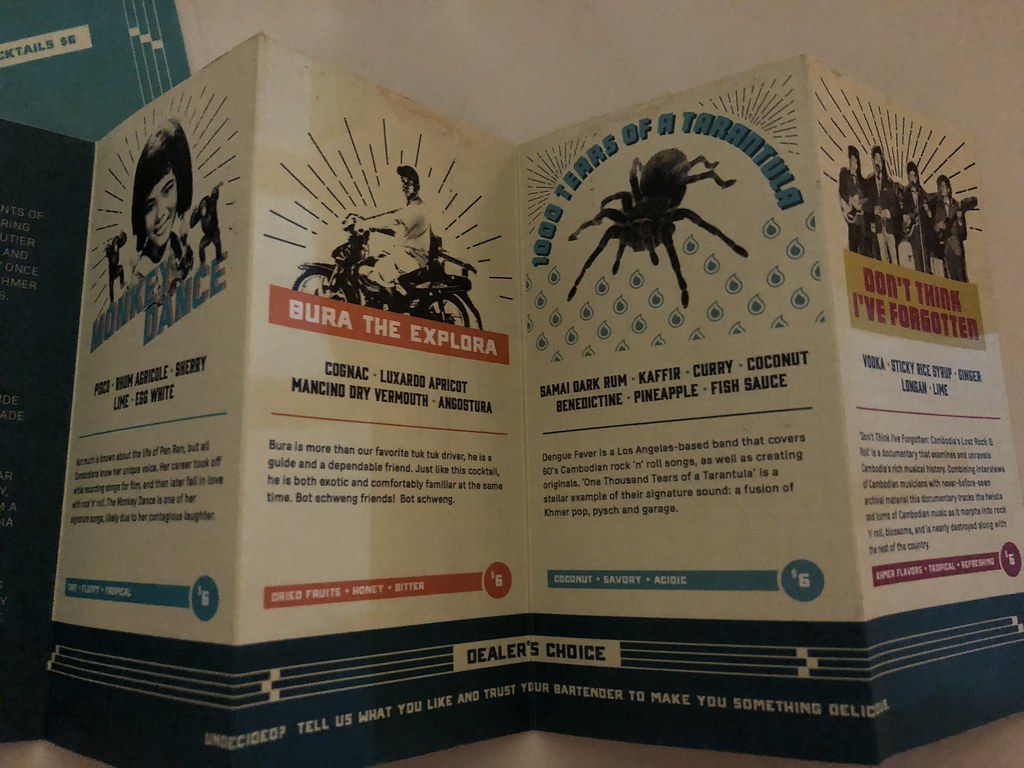 We took our drinks upstairs and sat at the open windows, watching the scenes on the street below. Some guys hanging out with their friend who had a food cart. A stray dog, hoping for scraps. A young boy, barefoot and pantless, taking a piss in a puddle on the street. 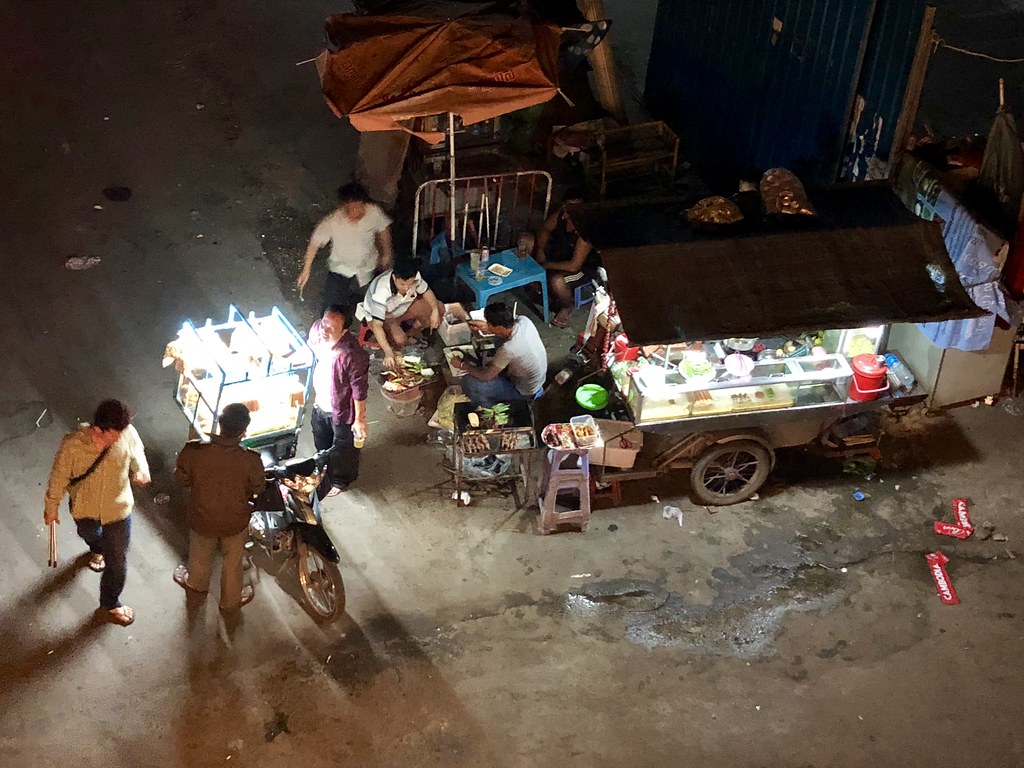 The next morning we boarded a tourist bus for our 5 hour drive to Siem Reap. I loved watching all the activity in the streets as we drove out of town! 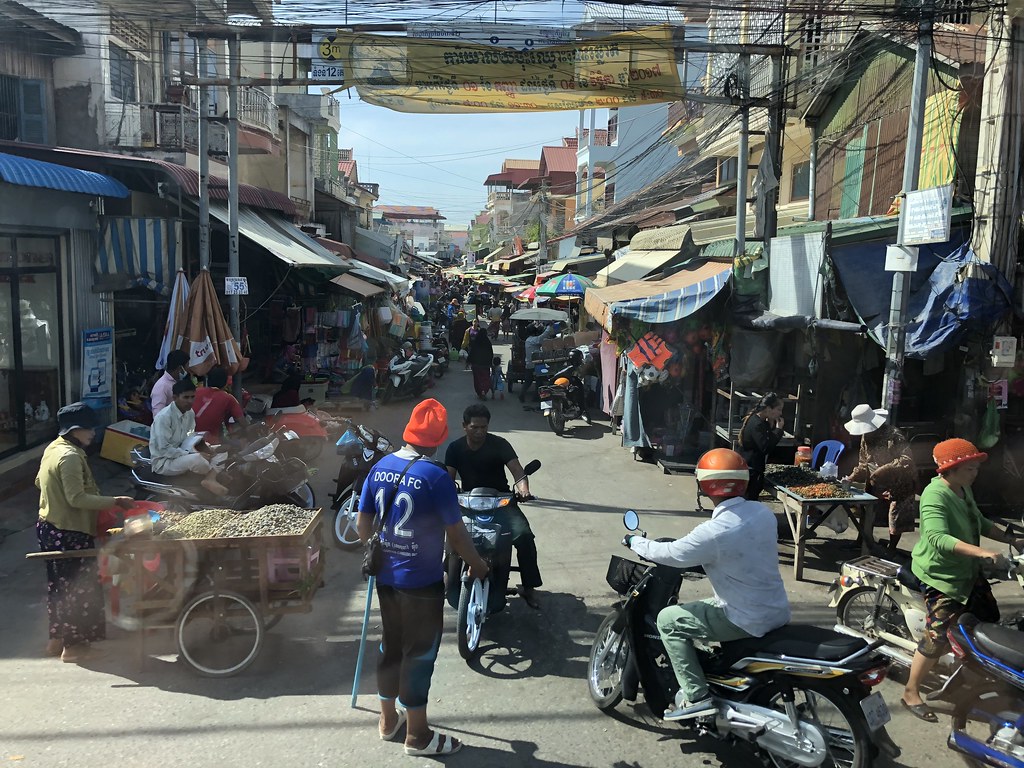 All photos from Phnom Penh here.