When Angkor Wat is the least interesting thing you see in a day, you know it's been a good day! 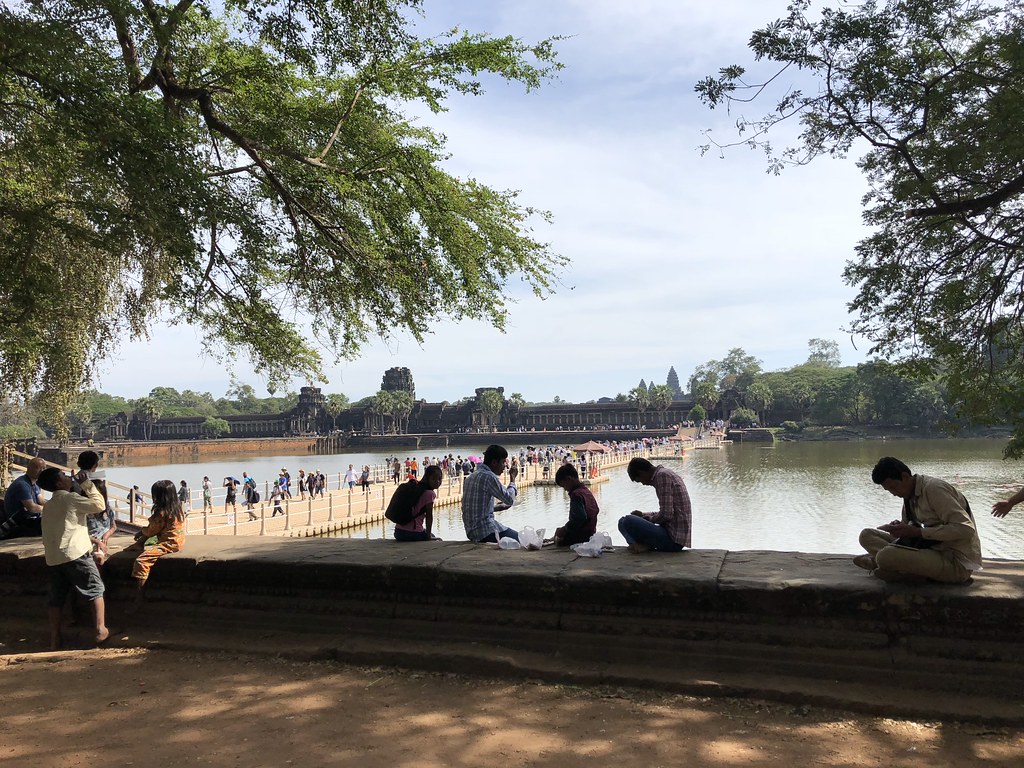 Don't misunderstand, the entire day was amazing! But we saw other temples that we loved even more than Angkor Wat, which I think is really saying something about the area!

Our private tuk tuk driver, Kong picked us up in Siem Reap for our first day exploring the temples of Angkor, the ancient capital of the Khmer people. He would drive us around all day for $20 (total, not each!) as well as give us tips at each temple, and have cold beers/water waiting for us when we returned. 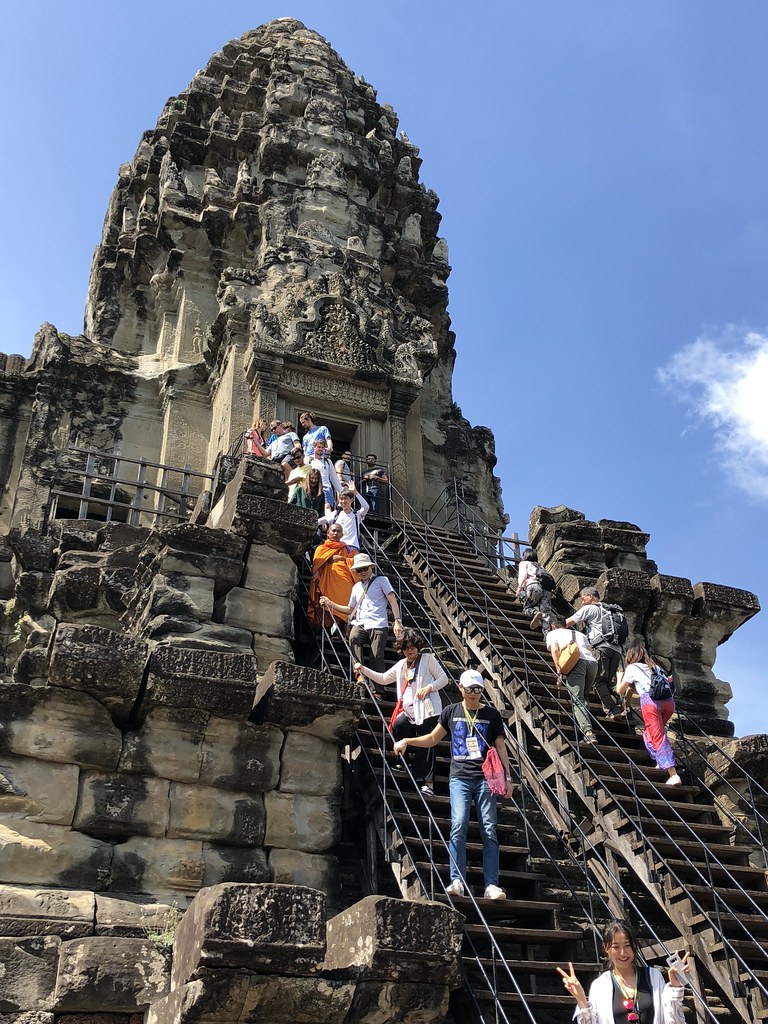 We stopped at the ticket office for our 3-day pass ($62) and then drove straight out to Angkor Wat. We hired a guide at the site for $6 each, but ultimately he had limited information to share, and was extremely long winded about it, which was tough in the heat. 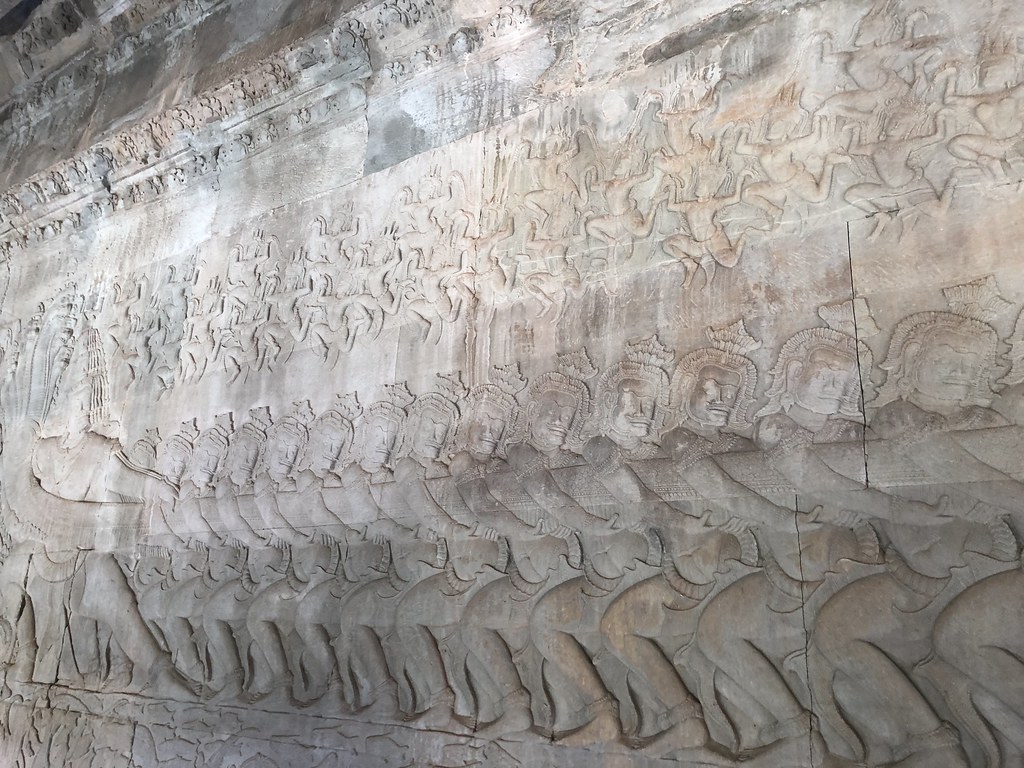 It's undeniable that the Khmer architecture and sculpture at this temple, dating from AD 1080, is shockingly impressive. It is just also the largest and most trafficked, which can take away some of the mystique. It was incredible to see this bucket-list sight! 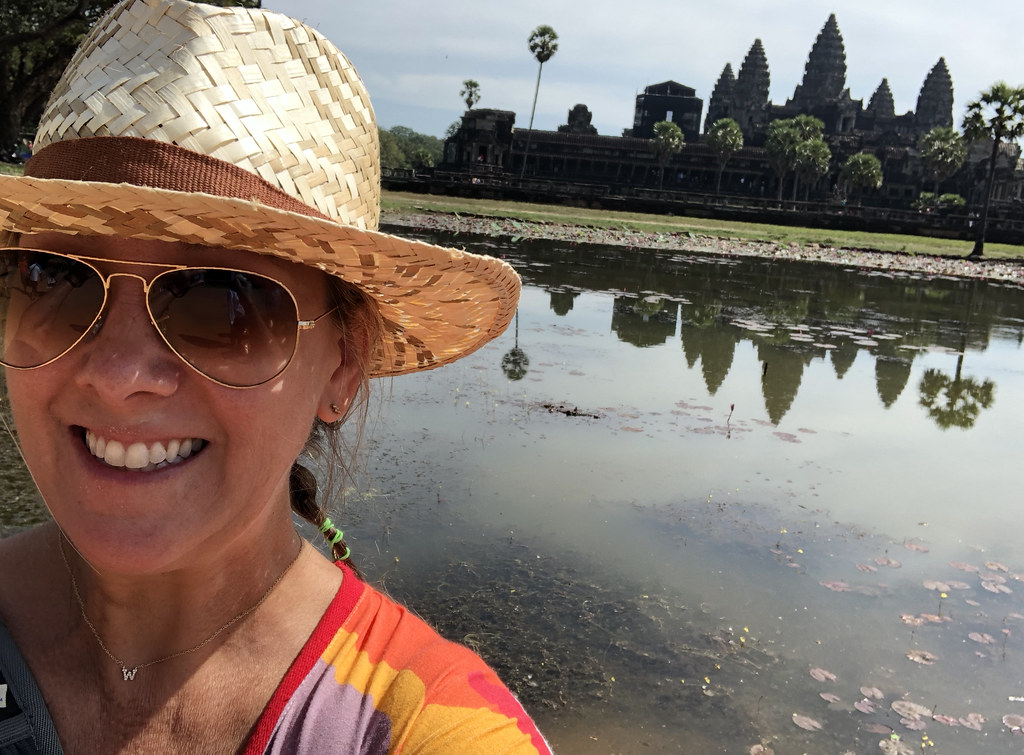 This area actually is home to around 70 temples of varying sizes, Angkor Wat is obviously the most well known, but we were excited to explore some of the others as well. Kong took us to a nice little noodle place for lunch, the restaurants are in palapa type buildings, and then we took off for Preah Khan. 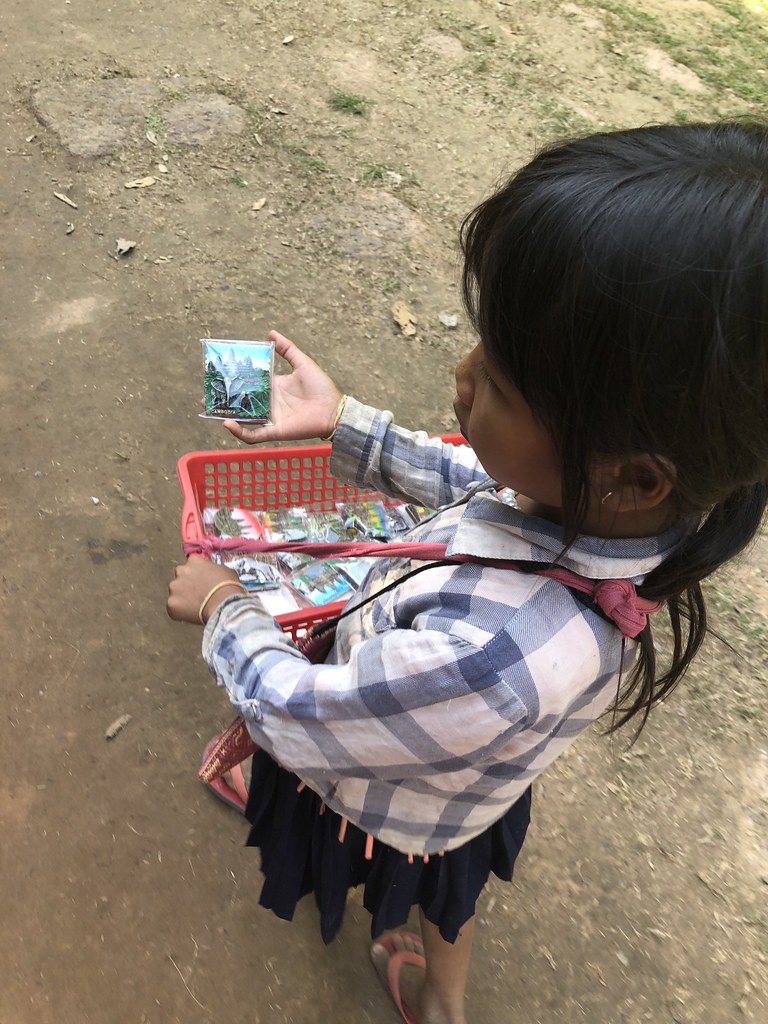 Walking from the parking area near the lake to the temple of Preah Khan, we had many little children trying to sell us an assortment of things for "just $1!". It was hard not to just give them $1 but education is free in the country and we all really felt that handouts like this deter families from getting their little ones into school. Hopefully, so that they can use an education to do something other than hawk souvenirs. Things to think about while in third-world countries... 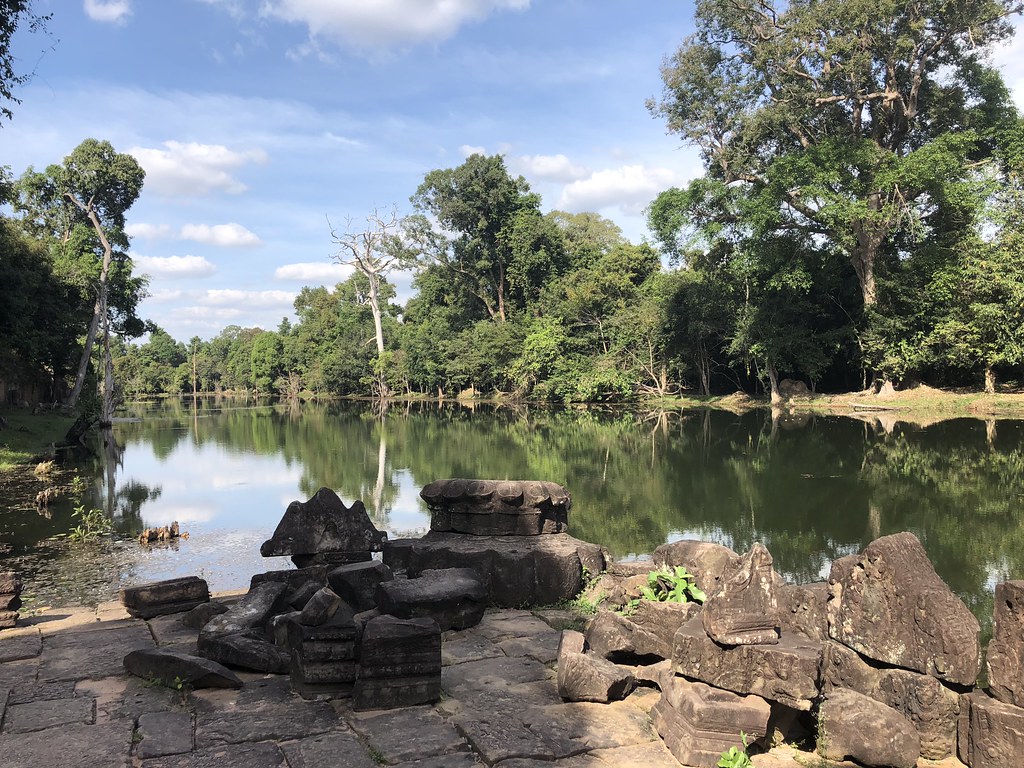 We passed some gorgeous relics on our walk, and passed over a bridge where the river was clear and beautiful on one side, murky and spooky on the other, before entering the temple grounds. 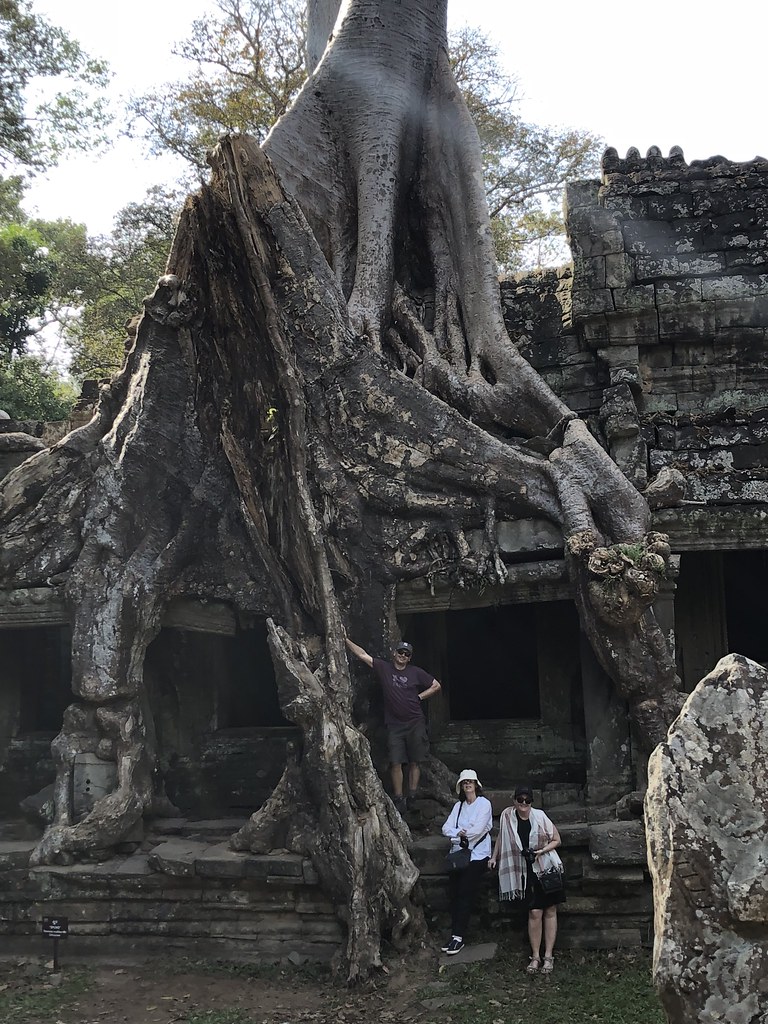 There were hardly any people at the site which was amazing. There are trees growing over buildings, they look like they are grasping them with their roots. And the apsaras, which line the Hall of Dancers, were gorgeous! 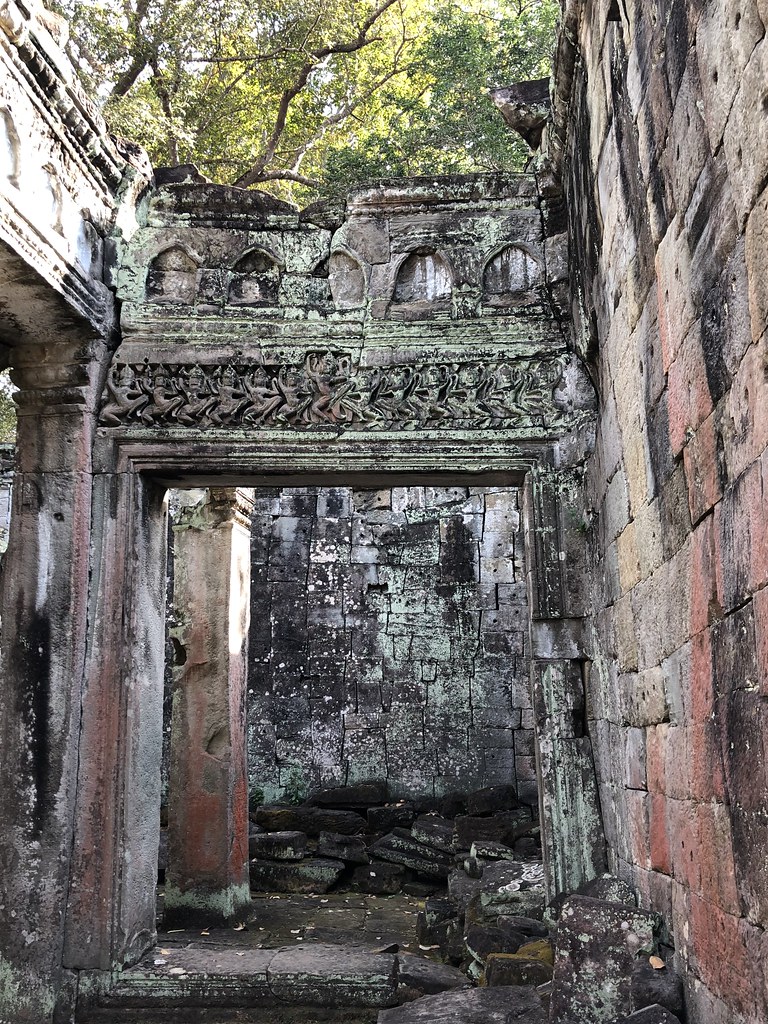 This is what we had come for! Crumbling temples with amazing bas-relief, in the middle of the jungle! We all loved this stop! An absolute must in my opinion. 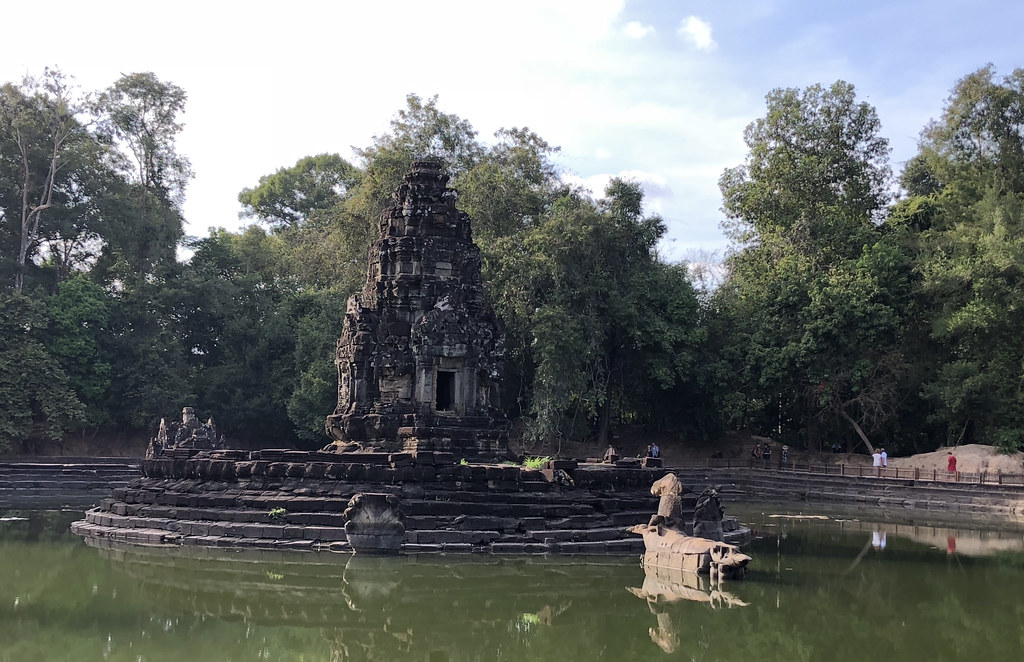 It was a really short drive over to Preah Neak Pean where we had an easy walk across the reservoir to a grouping of ponds. This monument sits in the middle of the largest pond with coiled snakes at its base.

When we finished walking around, we found Kong and drove into the entrance of Angkor Thom. 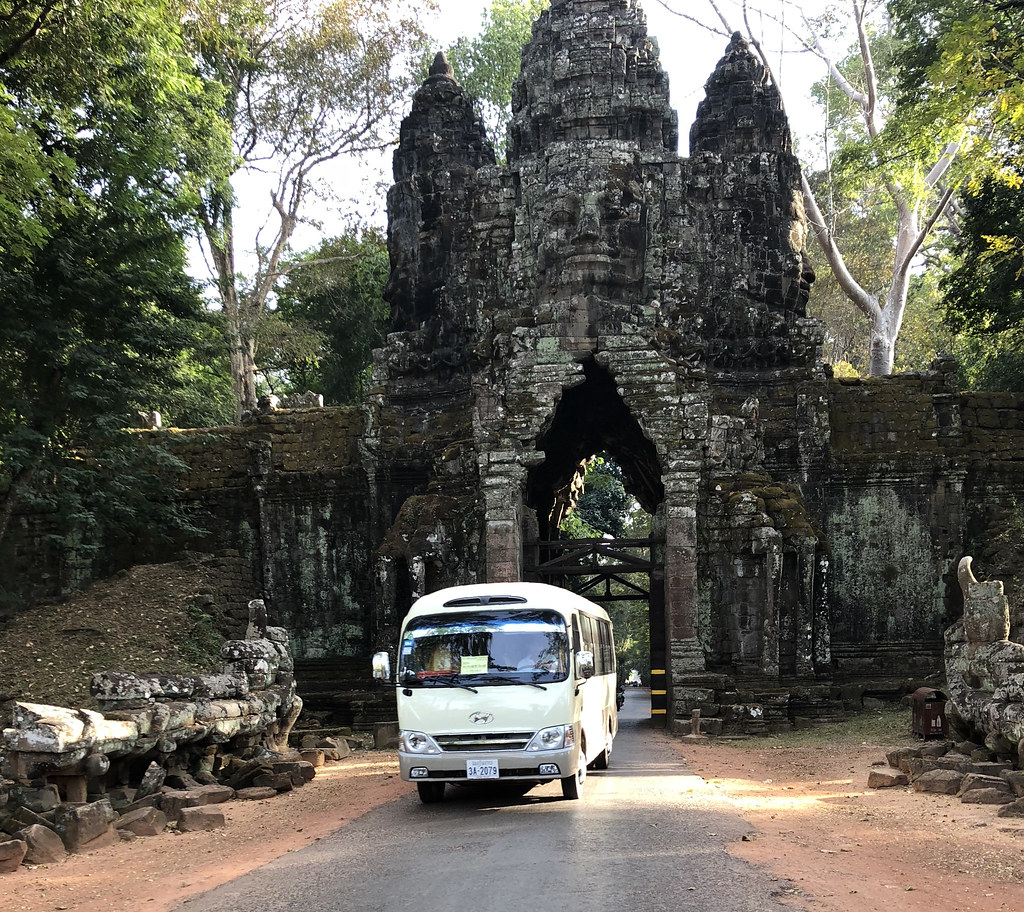 This was the last capital of the Khmer empire, and is a large complex with four entrance gates. There are a variety of sites to explore here, similar to Angkor Wat, including the Terrace of Elephants. 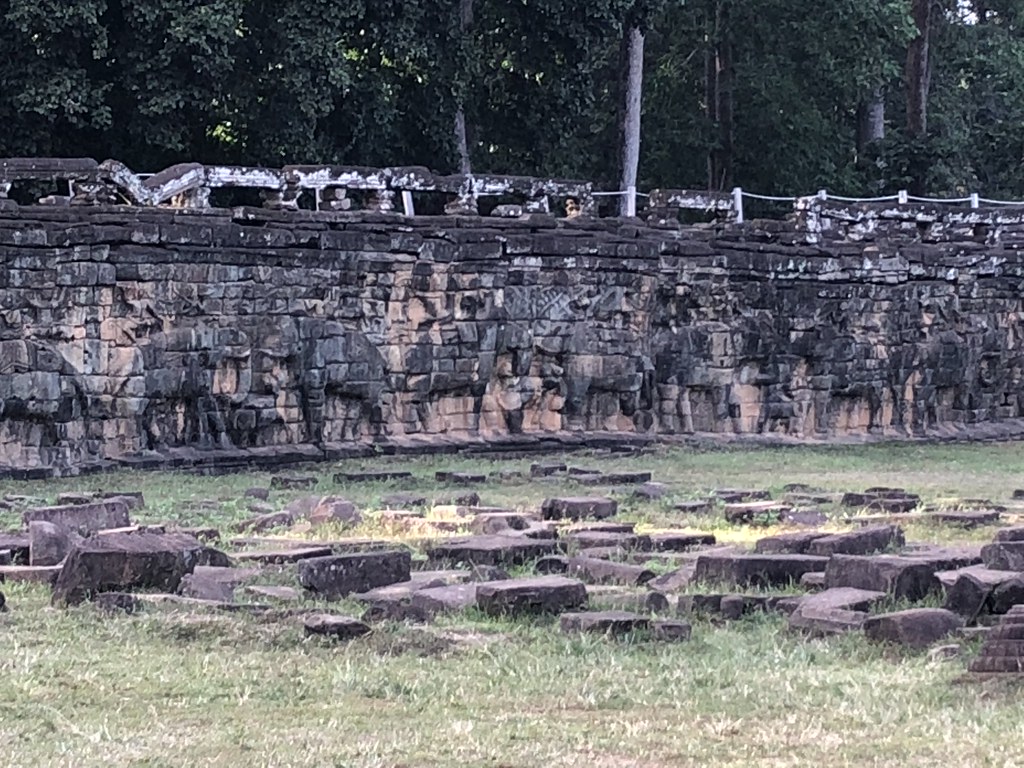 But the most well known, and incredible site in Angkor Thom is The Bayon. A temple which rises up with 54 towers, all with huge smiling stone faces! Truly an incredible sight! 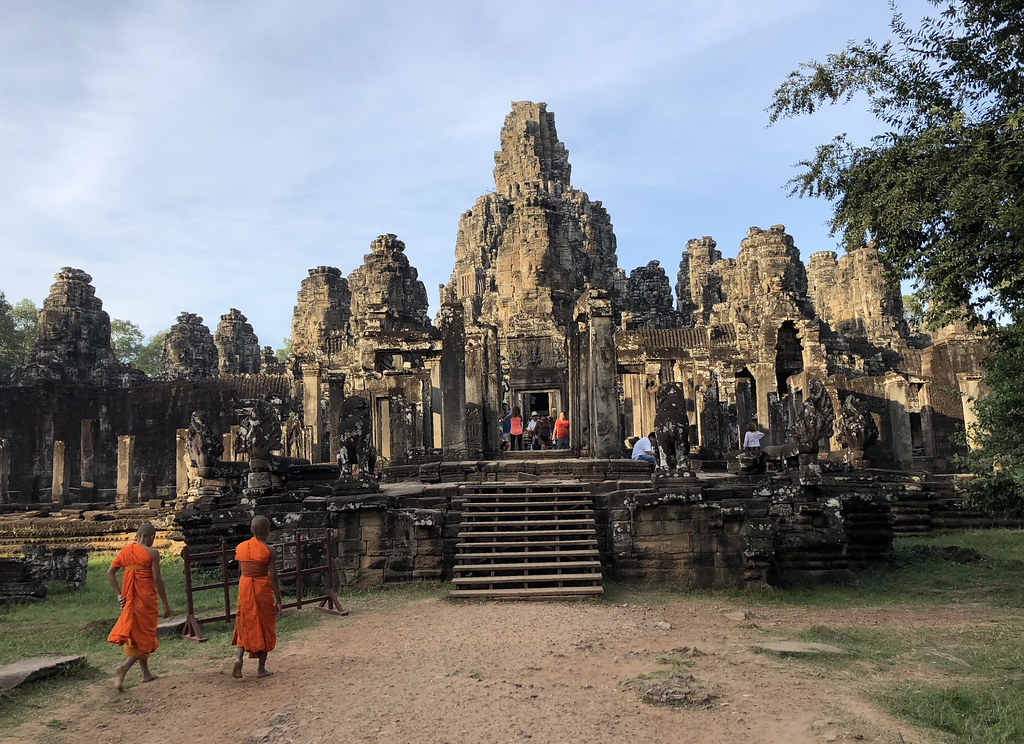 You can climb up and around the towers, into small turrets, and past walls of intricate carvings. Awesome. We were suppose to check it out pretty quickly, as we still had one more stop! But we all loved it so we ended up being a little late in getting a good spot at Phnom Bakheng for sunset. 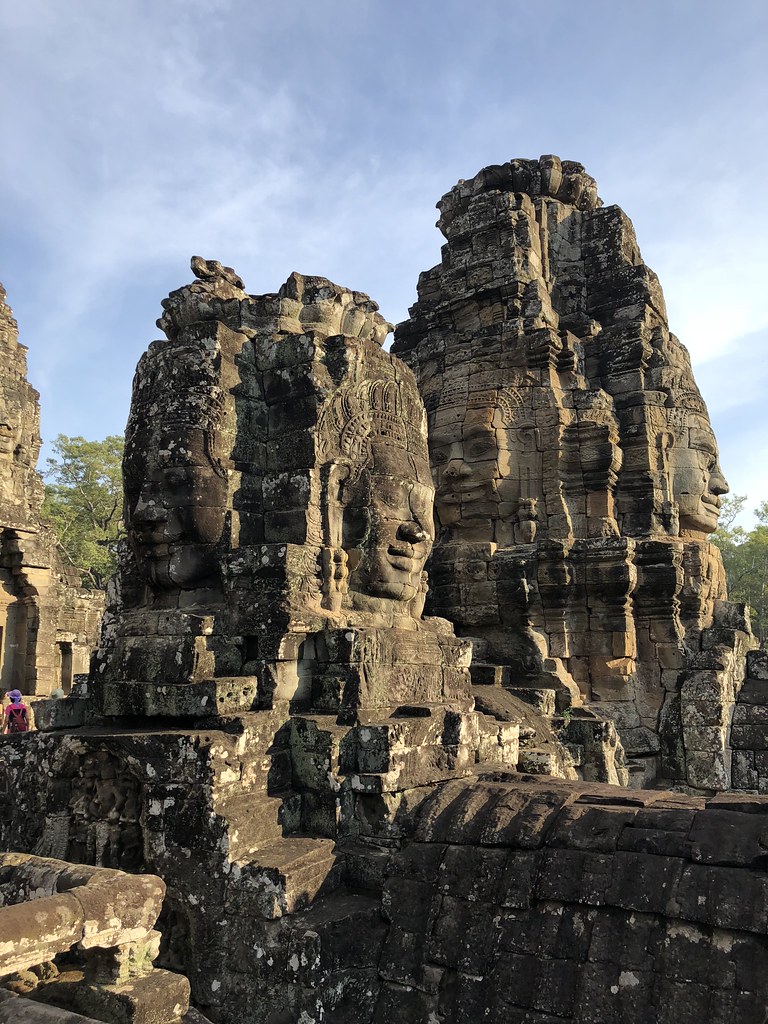 Once Kong dropped us off at the trail we had a bit of a walk up to the top of the hill, we didn't take the elephants as others did, but the views were lovely. One thing to note is that there are no bare shoulders or knees allowed at any temple sites. When we started to walk up the hill, there were "spotters" who sent people back. You can buy scarves and paros but make sure you have them with you! 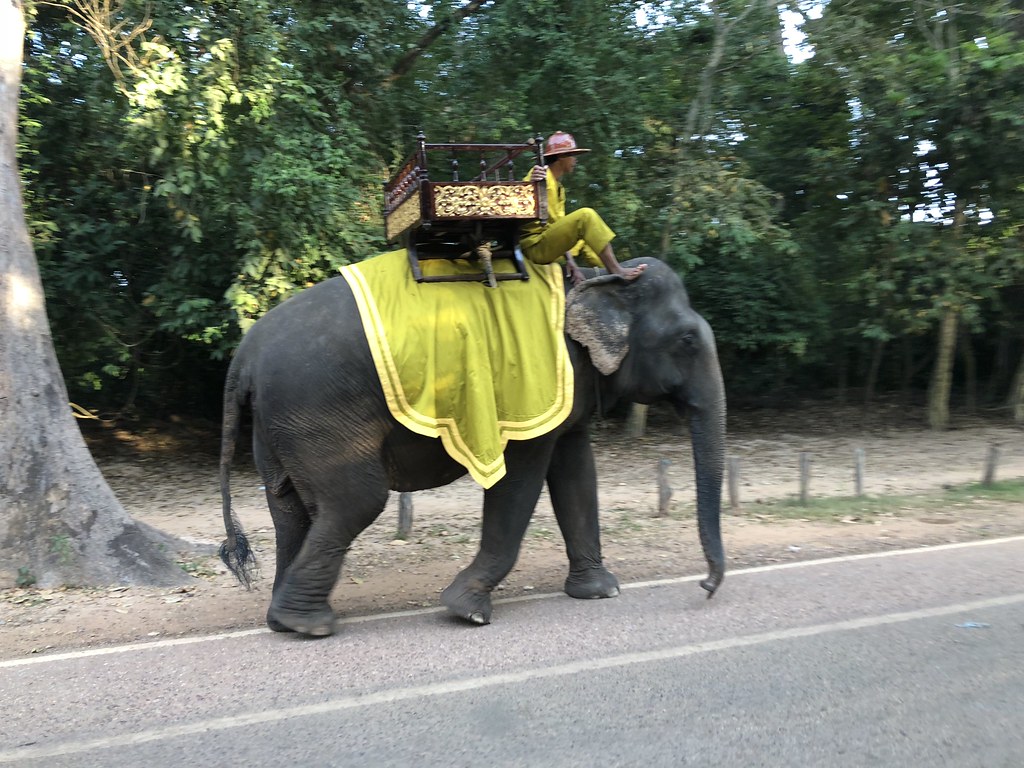 Only a small number of people are allowed at a time on the temple, which looks out over Angkor Wat and the lake Tonlé Sap, so sunset is prime time. And although we didn't get a spot at the top, it was still a very pretty way to end the (very full) day. 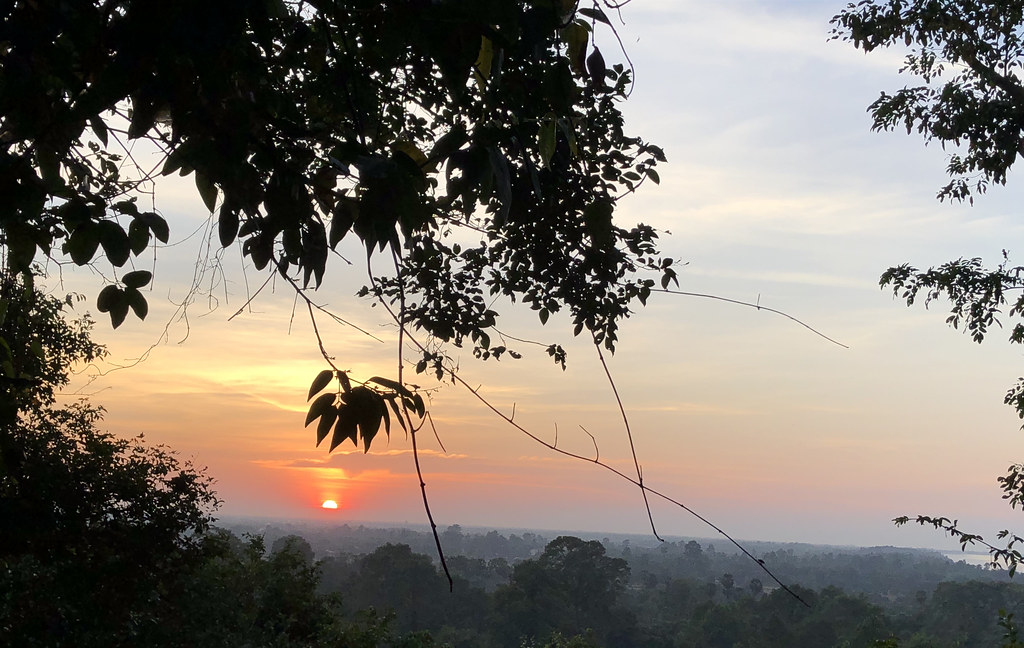 All photos from the Angkor area temples here.