Like most travellers who come to Cambodia to explore the temples of Angkor, we based ourselves in Siem Reap for 4-days. We arrived via the Giant Ibis bus from Phnom Penh, a 5-hour drive through the Cambodia country. It’s always surprising to me when I travel around countries that don’t have train options or quick domestic flights. So here were were on a tourist bus heading north past really nothing but rickety shack-style homes, on stilts, with dirt yards, a few had a cow in front. I found the scenery fascinating. 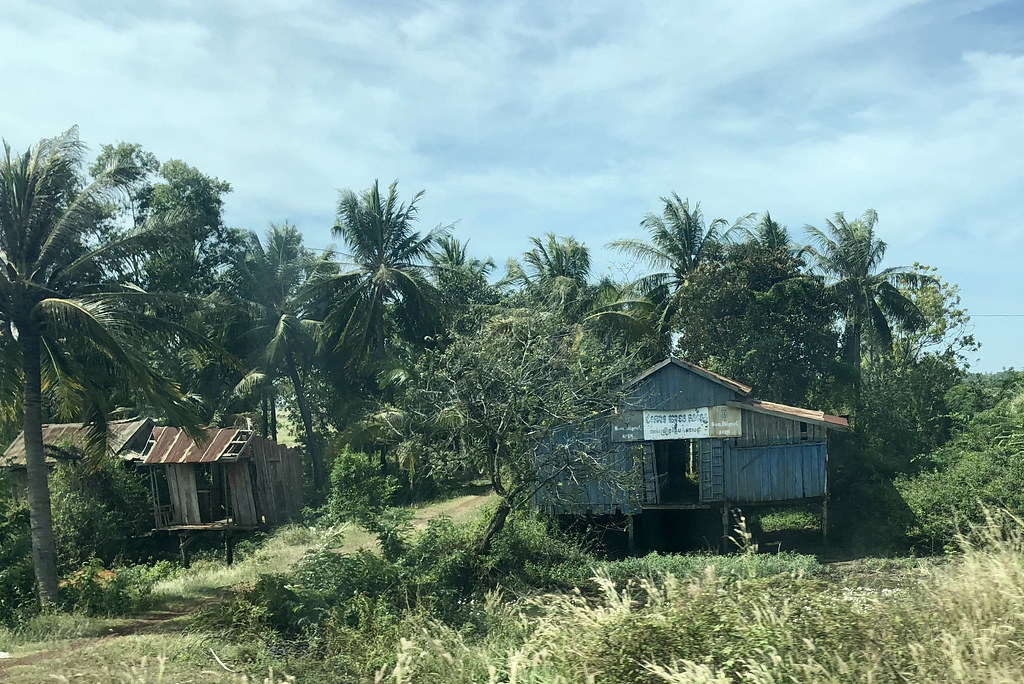 The bus had comfortable seats and intermittent wifi. We made a few stops along the way, one was basically a rest stop where we could use the toilets and buy snacks. I grabbed a few cold beers. The next was a roadside restaurant that also seemed specifically there for travelers, serving fine and quick meals. 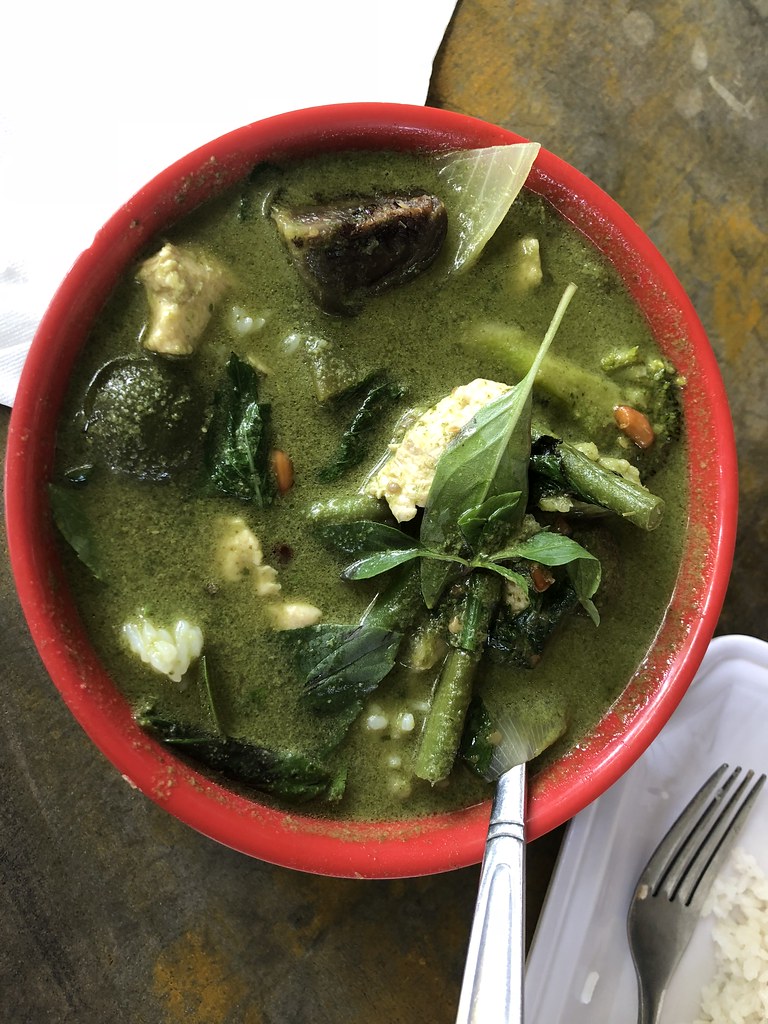 When we arrived at the bus station in Siem Reap we were met by tuk tuk driver Kong, who fellow blogger Lara from Gran Turismo Travels kindly arranged for us (she can also arrange tours of the area, check out her site!) Since there were four of us, and all with luggage, he ended up hiring an additional tuk tuk in order to get everything to fit. 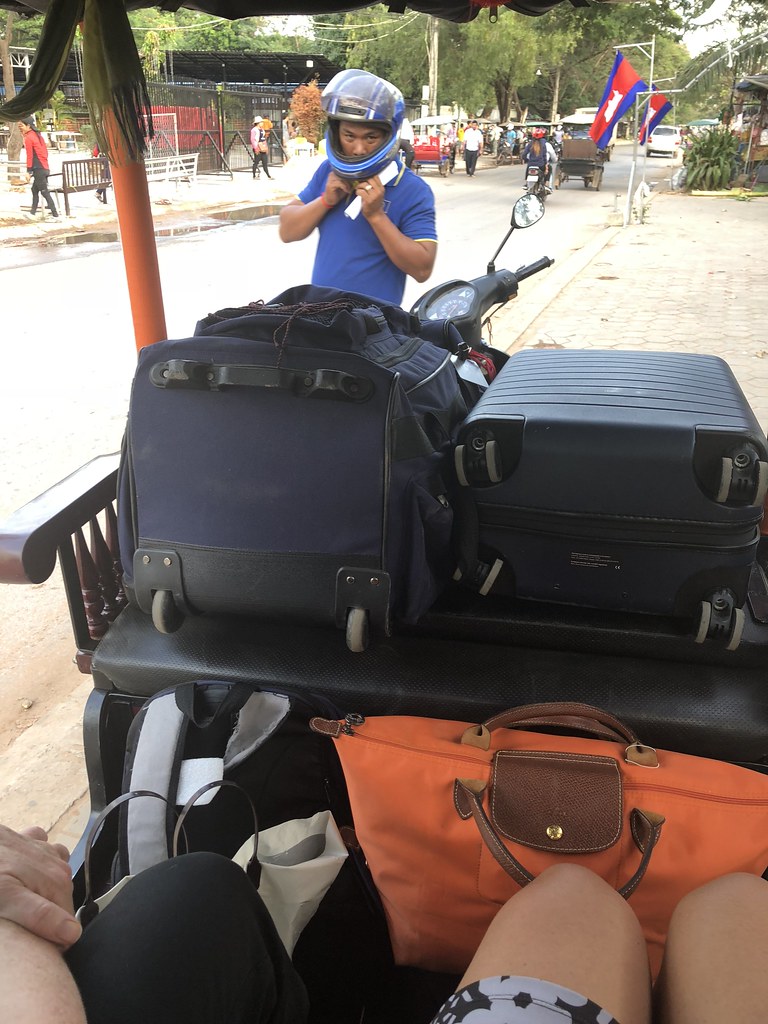 It was a quick ride to our Airbnb, a 3 bedroom/ 2 bath apartment right on the river that winds through town.

We headed up to the rooftop terrace with some champagne and sausage we had brought with us, for a toast to this new location and to take in the views and the sunset. 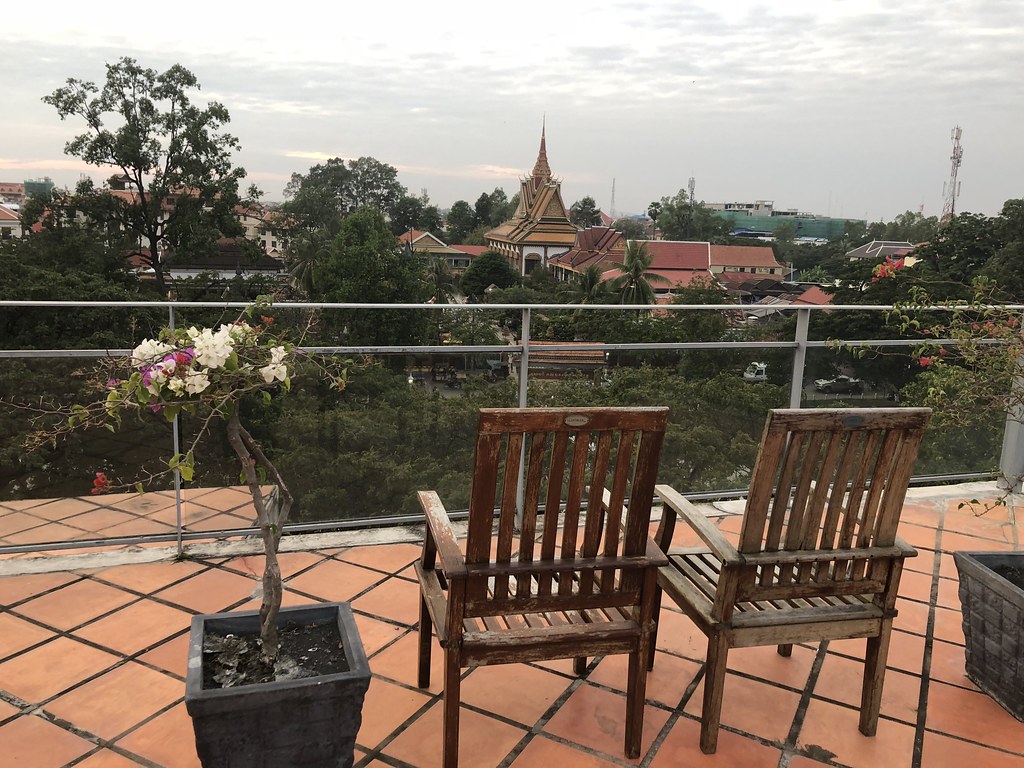 We had hired Kong for our entire stay, so each day we would discuss our plans with him, he'd quote us the price and would then be waiting at the agreed upon time. That evening he met us in front of our apartment and we took off for the Elephant Bar in the Raffles Hotel. It was fine, but it wasn’t as nice as the one in Phnom Penh.

Kong was waiting when we came out and he took us to a big night market that was happening right down the street. It was a maze of street food vendors, crafts, and games. 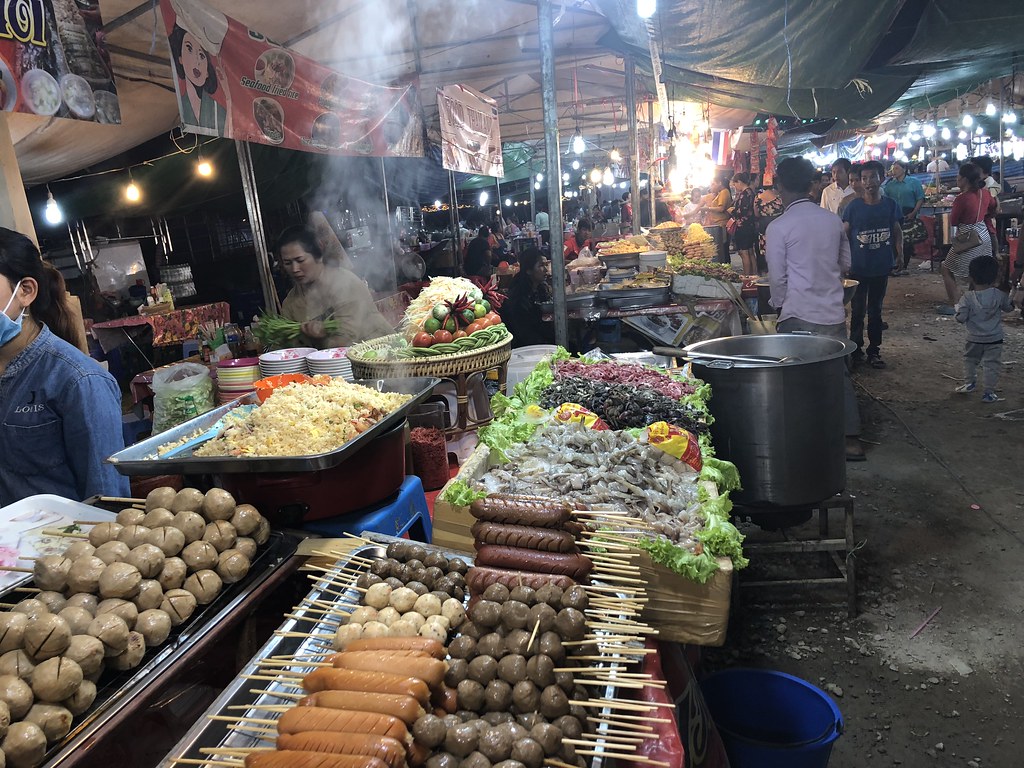 We ordered an assortment of skewers and also some banana crepes, which were similar to the ones I fell in love with in Thailand.

Our next stop was at Asana, which is a really cute restaurant housed in the only remaining Khmer wood house in the area. Unfortunately the drinks were pretty actively bad, I don’t think any of us finished ours. I can't speak for the food. 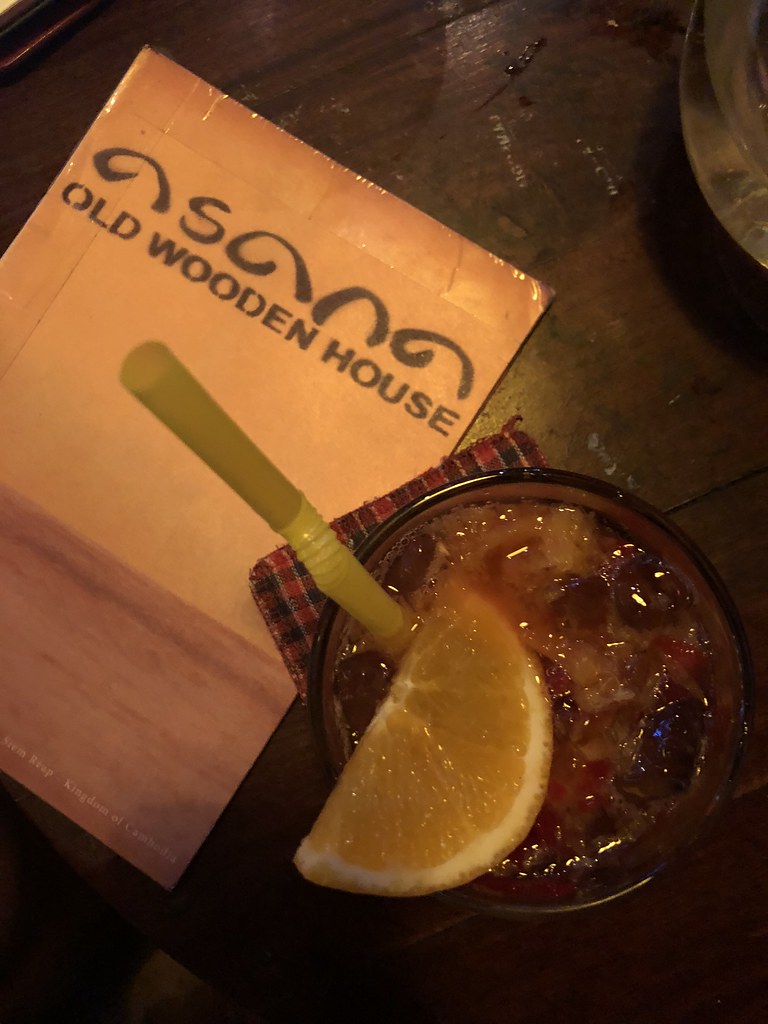 Just around the corner, Miss Wong was much better. Dark wood and red Chinese decor gives an atmosphere of a speakeasy (or opium den). The manager kindly sat us at a great table straddling the inside and terrace. 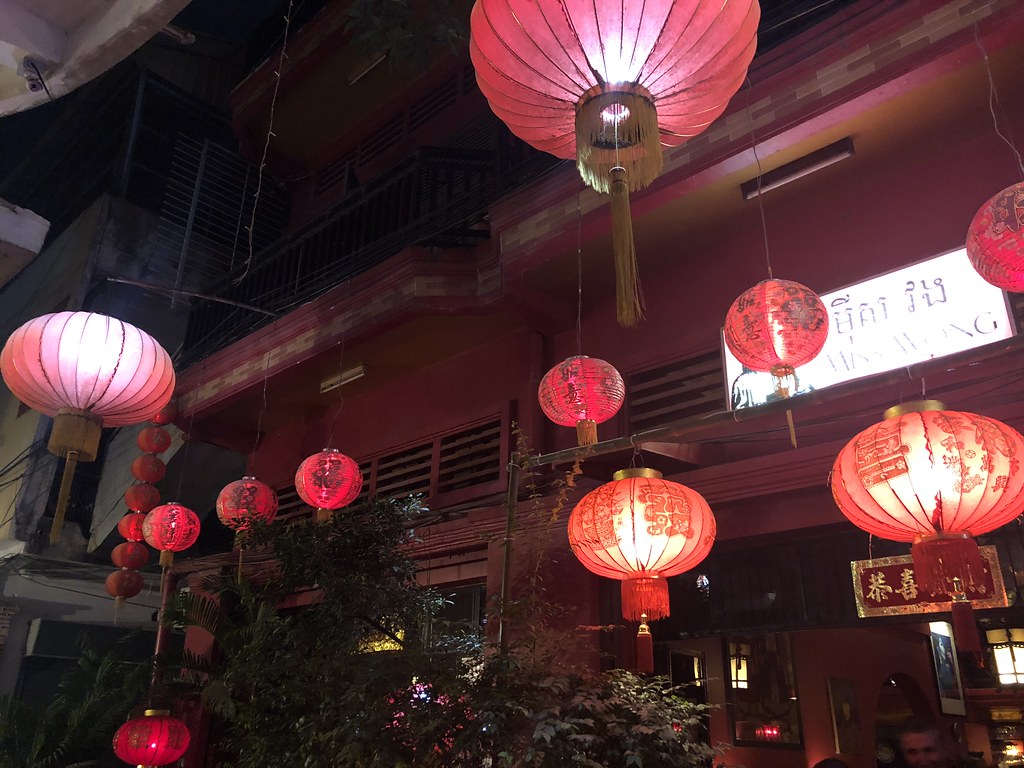 We had a couple of rounds of drinks and also some dim sum bites and everything was pretty good.

We weren’t in town much, and after full days at the temples we weren’t up for big nights out, but we found a few good places for drinks and dinner.

We all really liked our drinks at Menaka, a funny speakeasy style bar with big map scrolls as menus. The staff was eager to please but it still felt relaxed and fun. 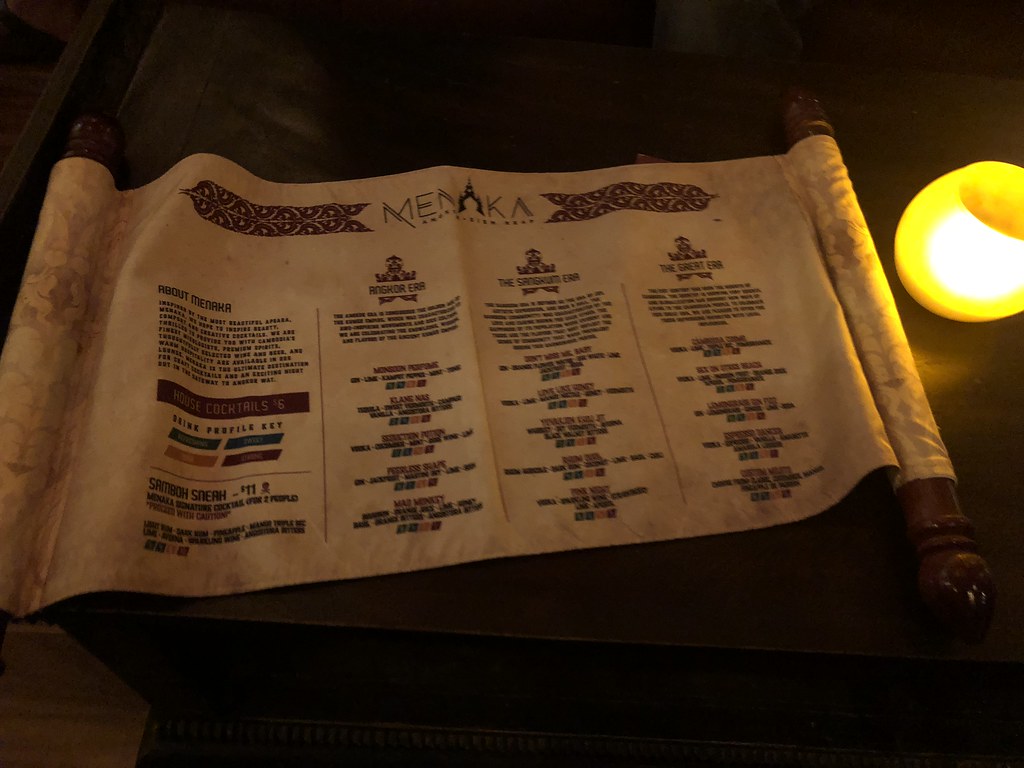 Downstairs it is a cute little coffee bar & cafe, but none of us tried it so I can't report.

Another friend had raved about The Sugar Palm restaurant and how their traditional dish of fish amok is a bit different. We loved the restaurant and the other dishes we got as well. By far the best restaurant meal we had in Cambodia! 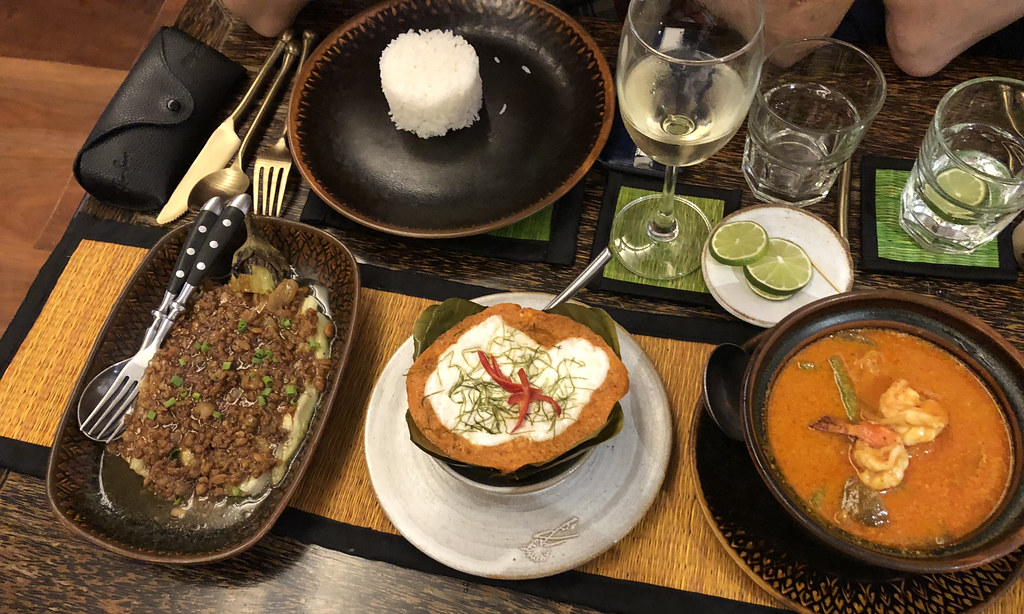 The FCC had also been recommended to me, so one day after the temples we stopped in for a late lunch and some much needed cold beverages. It's a bit worn down but still a fun place to relax and check out the old decor and photos lining the walls. The food was fine, it's more about the history here. 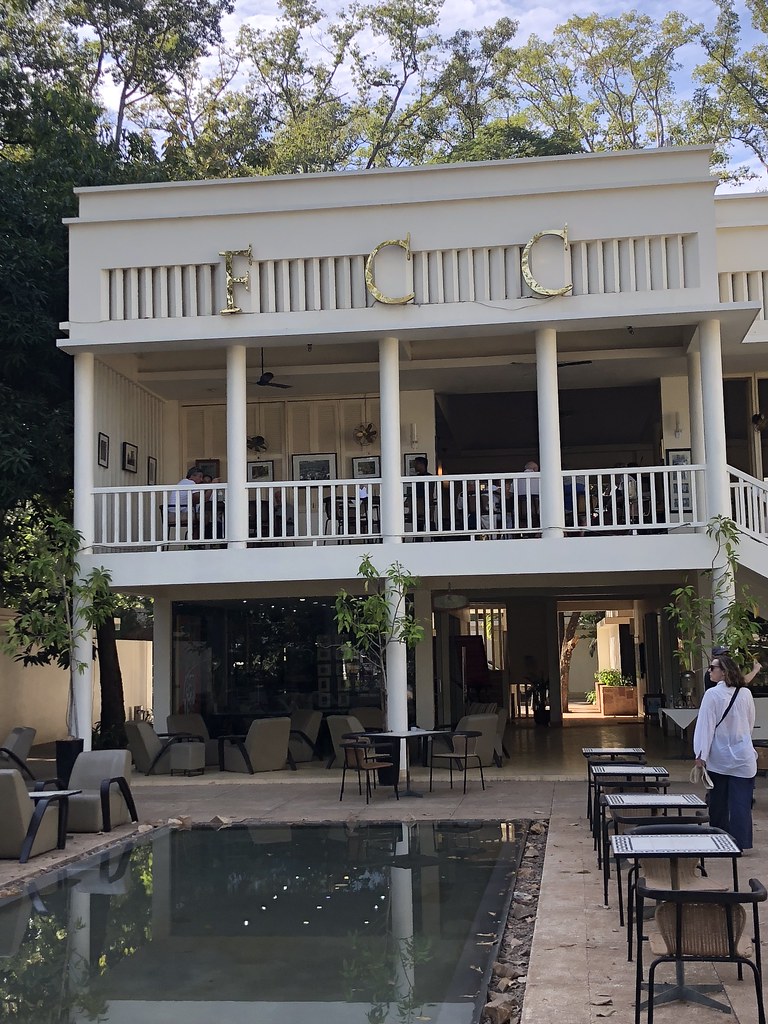 On our last day, after we packed and spent a couple of hours at our rooftop pool, we had a very good lunch at Nest. It looks like it might turn into a bit of a club atmosphere at night, but during the day it was a good choice.

But mainly we ended our big days of exploring the temples with martinis, snacks, and Exploding Kittens around our air conditioned dining table.

Food was just ok in Cambodia. We had better meals in the restaurants vs in Vietnam we thought the street food was better. 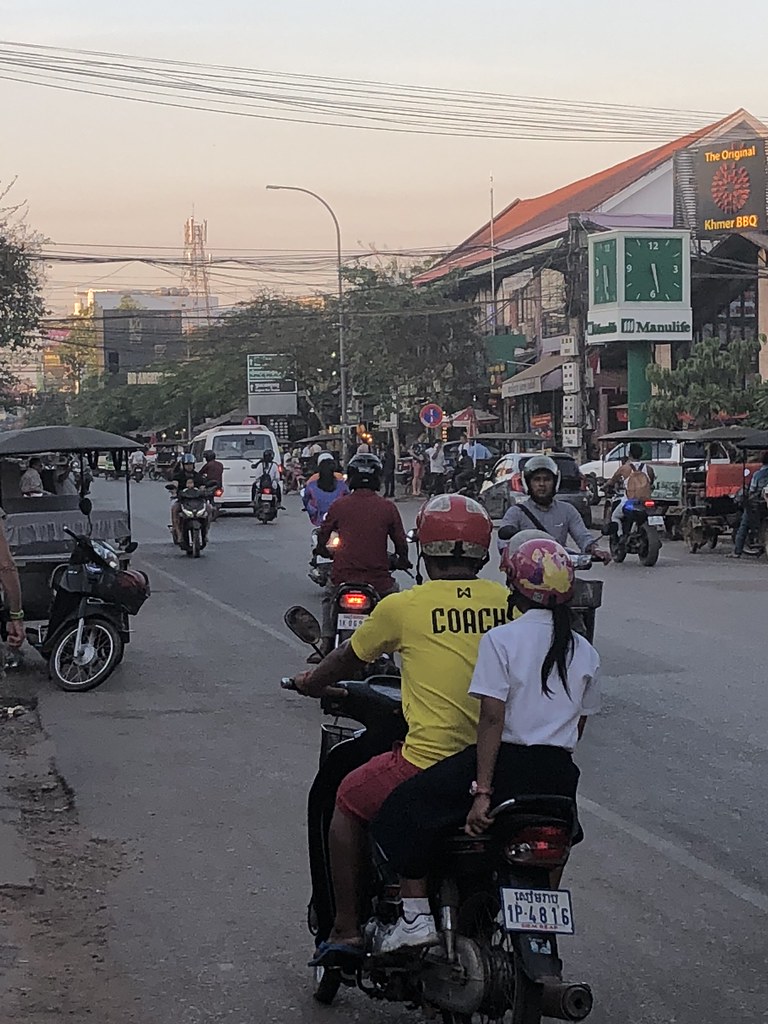 We also found some great shopping! Artisans Angkor sells gorgeous and upscale clothing, art, and house decor. I bought some beautiful ceramics as well as a silk pillowcase with a cute little partridge on it.

At Mekong Quilts (which also has a shop in Phnom Penh) I picked up hand-embroidered placemats and napkins for my dining room. I'd highly recommend both shops as they sell from local artists, who in many cases are women.

And of course there is a big fun tourist market filled with scarves, T-shirts, tchotchkes, etc.

Siem Reap isn’t large but in the heat and humidity we were glad to find tuk tuks easy to flag down. We noticed that there were hammocks hung everywhere, entire restaurants where hammocks were hung near tables so you could snooze after eating! Even the tuk tuk drivers had hammocks they would set up for when they waited on customers. That heat makes you sleepy! 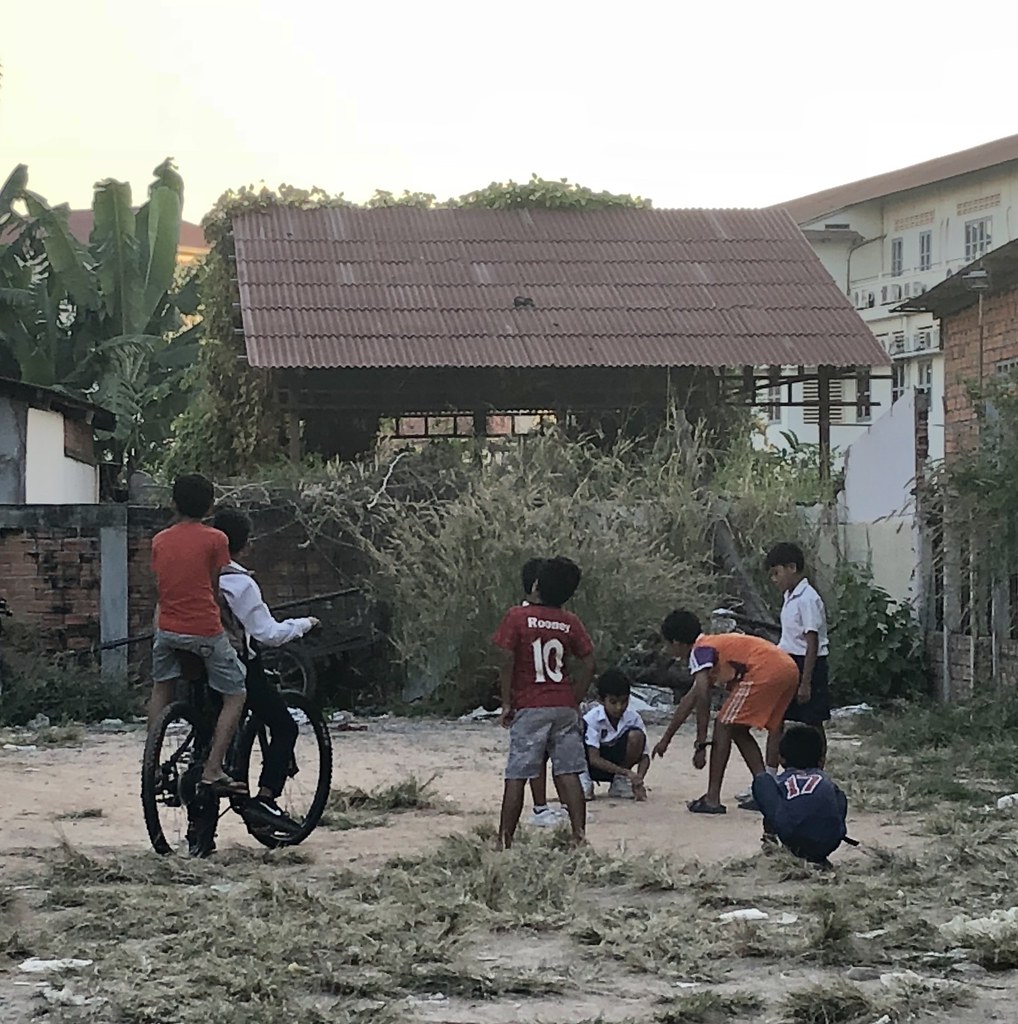 Caitlin flew out of SR back to London but Thibault, Forest, and I had to get back to PP for our flight. Kong had arranged a private car and driver for $90 for our 5 hour drive back. 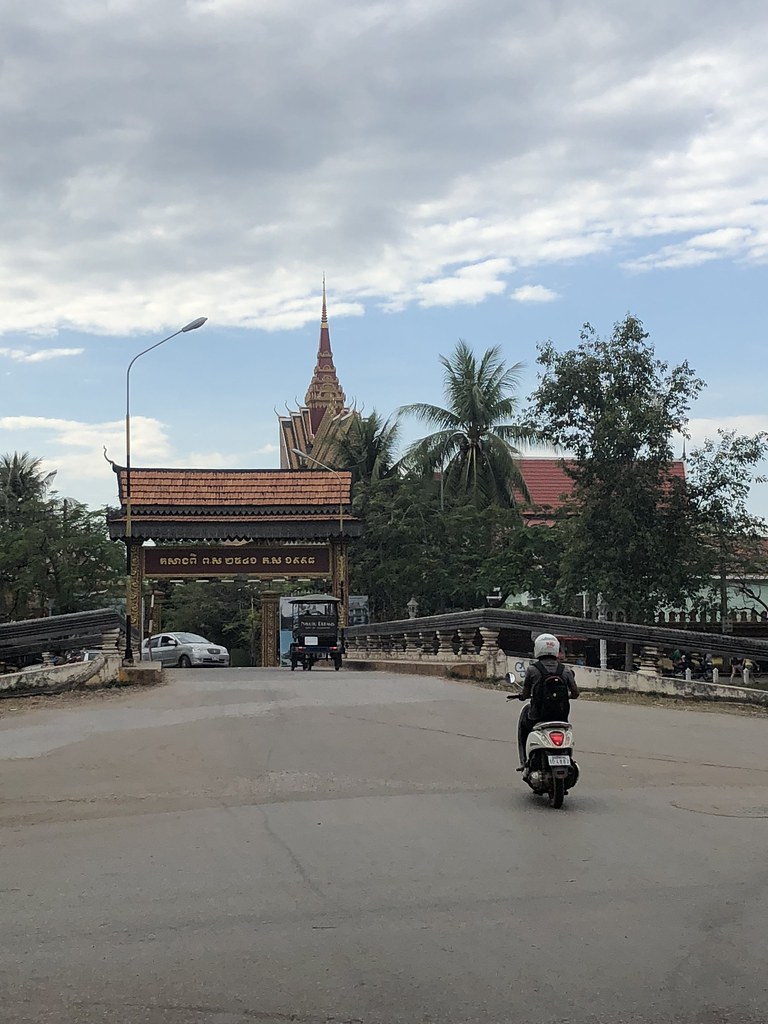 It was an experience, made even more interesting by the fact that our driver spoke zero English. It took us a while to communicate that we wanted to stop at a convenience store to grab beers and snacks. The car was an older sedan style car and for whatever reason there were mosquitos inside of it! We spent the first few hours spraying bug spray in the car and swatting at the hungry fuckers!

Again, the landscape was fascinating to me. The poverty of the country is shocking. Not because the people don’t work hard, but because of the government and lingering results from wars and coups.

At one point we had to stop for a herd of water buffalo crossing the road. 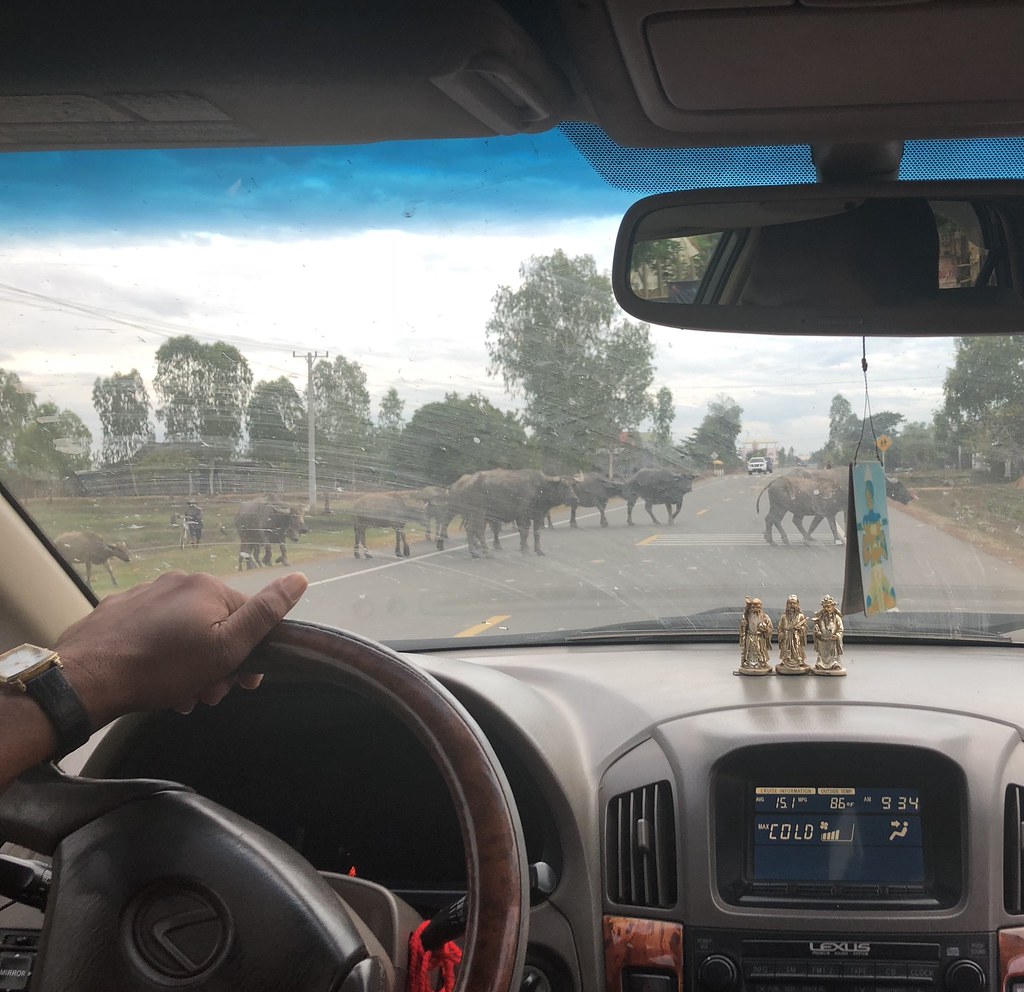 Another time we let our driver know that we needed to stop for a toilet and he found a gas station of sorts. We didn’t feel comfortable leaving him alone with the car full of all our stuff so Thibault stayed while we went. The bathroom was a cinderblock room with no light and a water filled cistern used for flushing the toilet. Also there was a large frog on the wall ledge watching while I peed. That’s a first. When we warned Thibault about the peeping frog he elected to go around the side of the building. 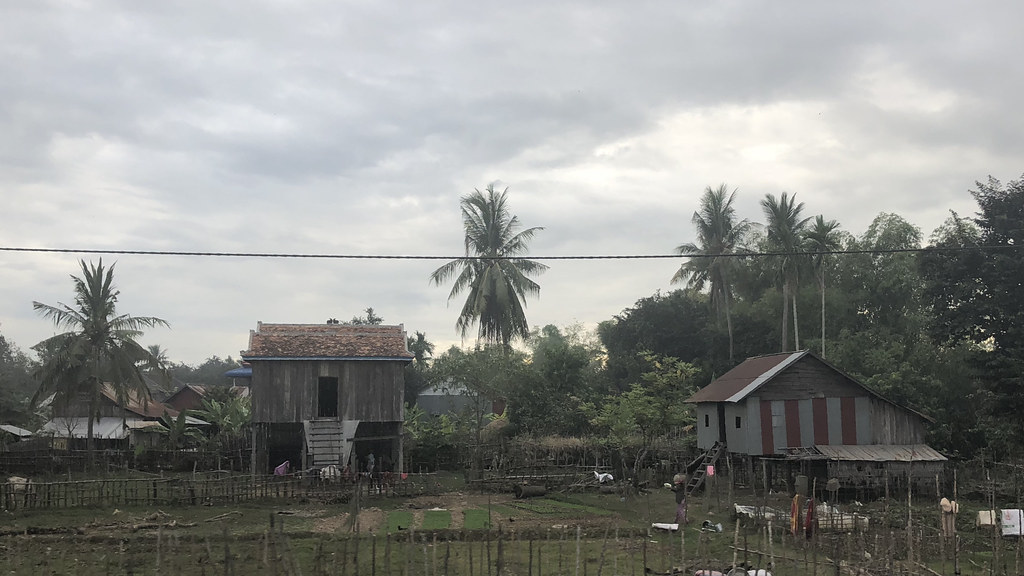 We finally made it to Phnom Penh airport. I snuck Forest into the Business Class lounge with me where we had wine and foot massages. Then we met Thibault for a cocktail before flying on to Seoul. After that car ride we deserved some big cold martinis! 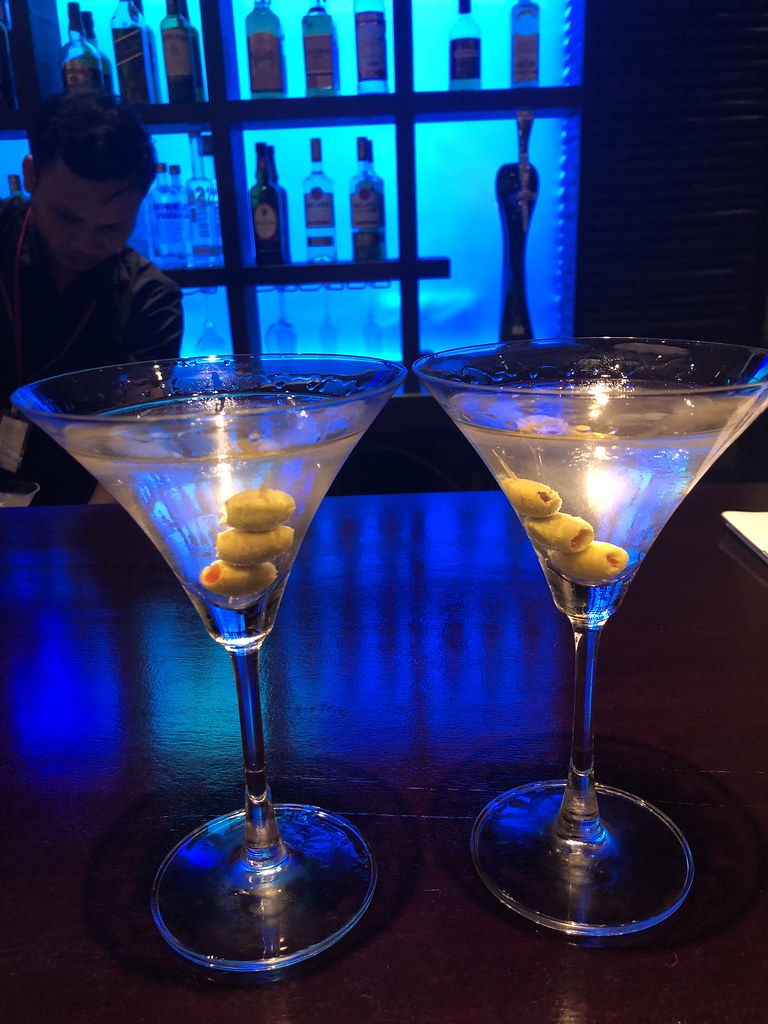 We had different flights into Korea but met up in the airport where Forest and I booked into the spa for 70 minute full body and foot massages. They were great but it cost us $144 which in Asia is like a million dollars!

We said goodbye and I headed to the Business Class lounge to wait for my flight. Originally I had planned to take one of the free city tours that the airport hosts but it was only 33F outside and I didnt even have a jacket with me so it would have been pretty uncomfortable. If you have a long layover I'd totally check it out though.

I was very happy to be in business class on my flight home, it was an absolutely fantastic trip, but I was tired and the comforts of the lay-flat bed and champagne were welcome!