I left Dublin on a 9:30am train to Belfast; my hotel had arranged a taxi to pick me up and drop me at Connolly Station. As I had made my reservation online in advance it was quick and easy to print my ticket at the station when I arrived. The trip was just over 2 hours and cost €19. 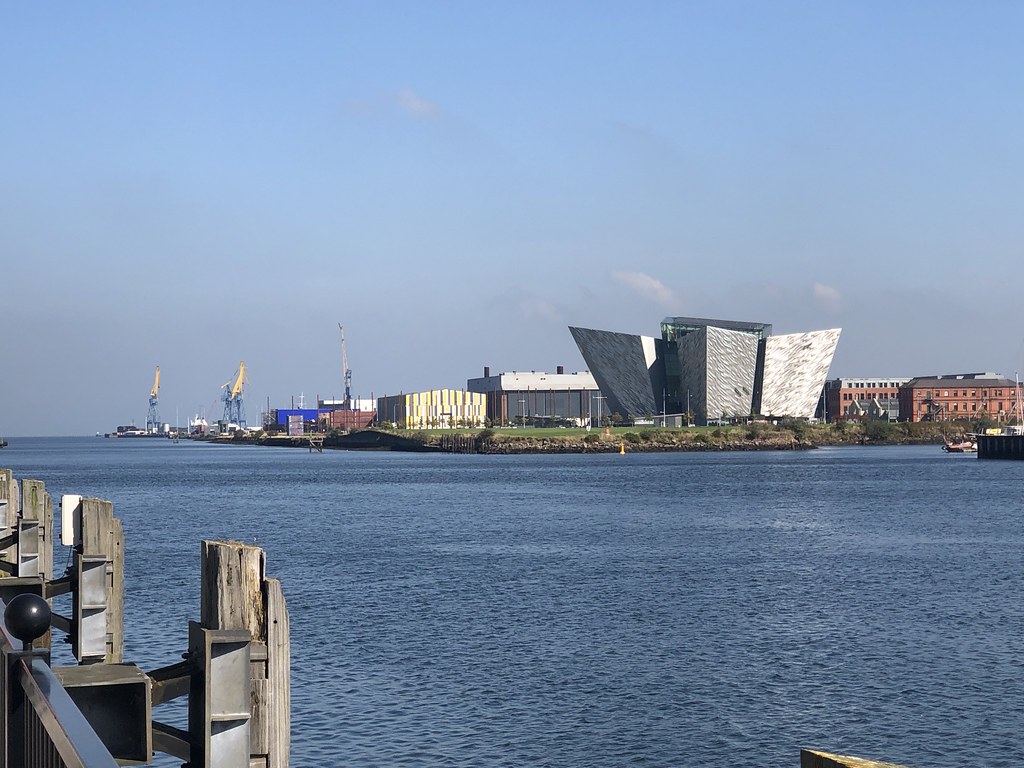 At the Belfast station I took some cash out of the ATM (Belfast is in the UK and the UK is on British Pound vs the Euro in Ireland) and grabbed a taxi to the waterfront AC Marriott. It was too early to check in but they kindly stored my luggage and I set off to get some lunch. 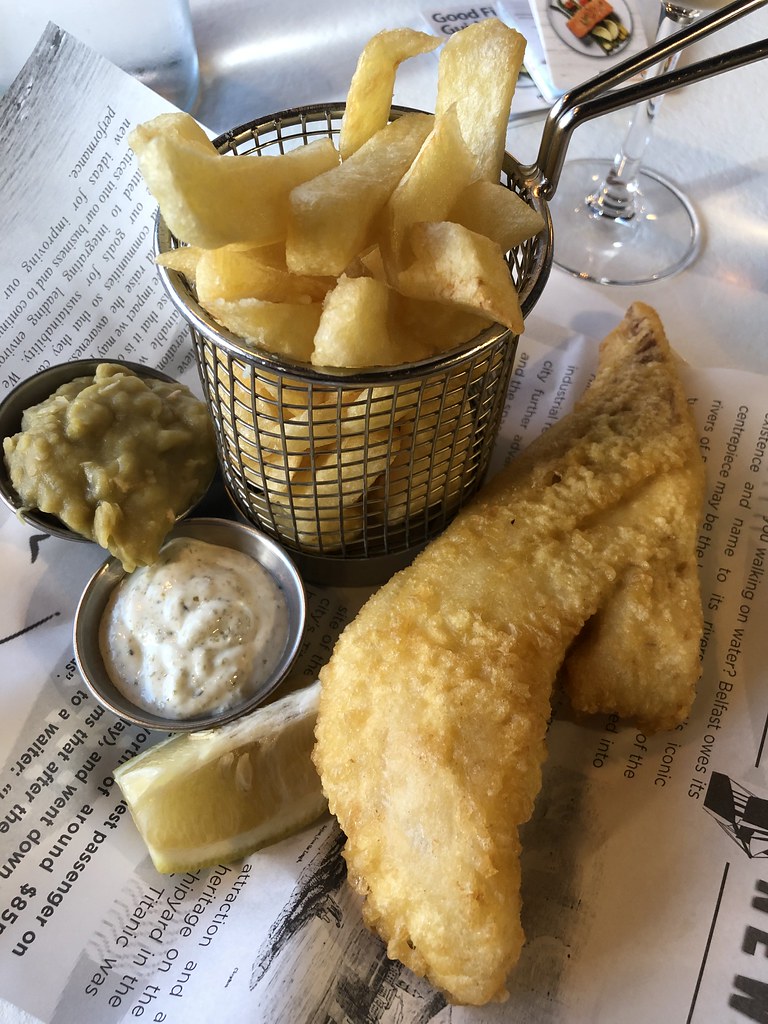 Fish and chips were on my mind so I headed to Fish City in city center. It was a gorgeous sunny fall afternoon and it was nice to be able to walk around since I only had 1 day in town. My fish was delicious! 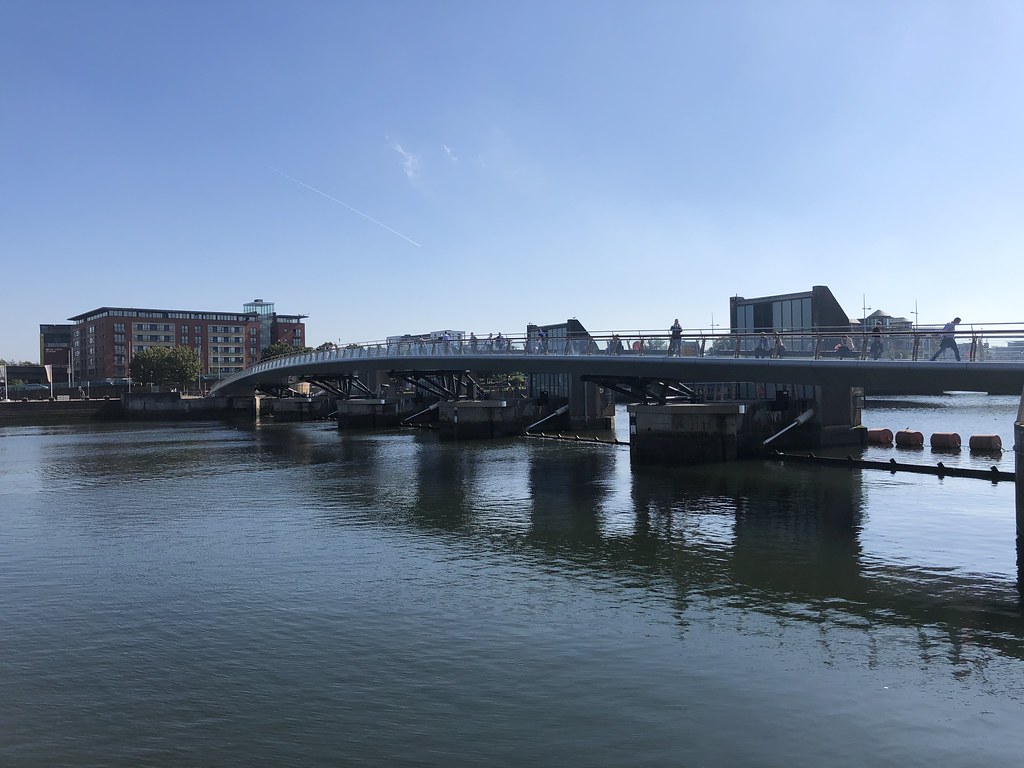 Afterwards I wandered along the banks of the River Lagan as I made my way back to the hotel. I was picked up in a traditional black London-style taxi for the 1½ hour Paddy Campbell’s Famous Black Cab Tours I had booked.

My driver Charlie, born and bred in Belfast, set about explaining the circumstances around "The Troubles" as we drove to the area of Shankill Road. 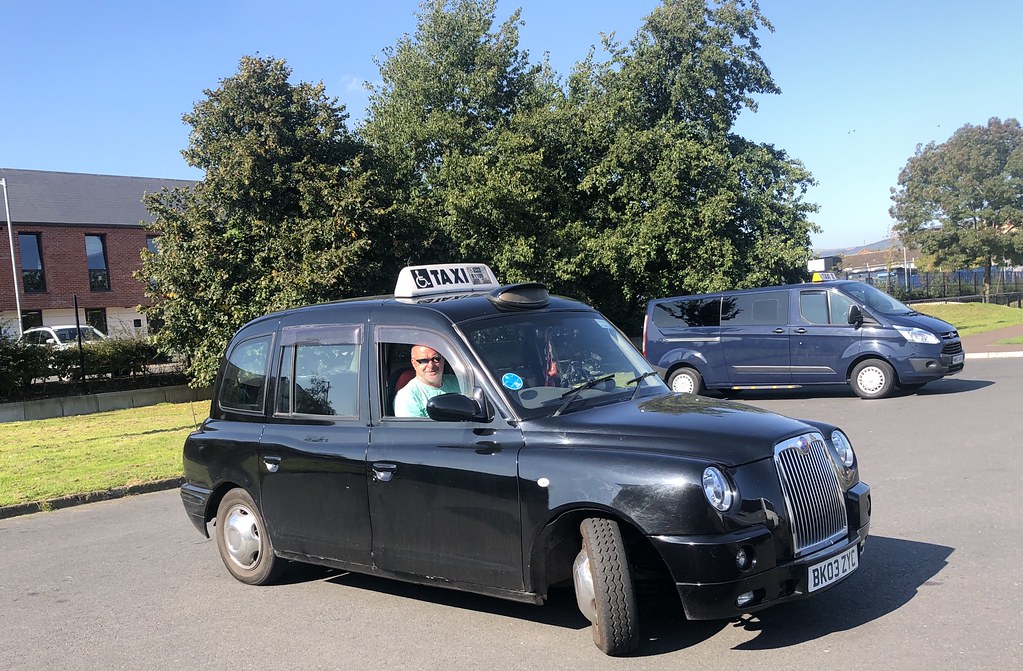 I knew very little about the two sides of this political conflict so it was surprising to see first hand the absolute division, still to this day, of the Loyalist (Ulster) and the Irish Republic.
We started in the Loyalist neighborhood, the area that is fiercely sided with the UK and is mainly Protestant. Union Jack flags waved from every building and were painted on road curbs. The infamous murals, painted on the ends of row house buildings, are still there to commemorate people they consider heros and to spread their political views. They are frightening! Can you imagine seeing this everyday outside your house? 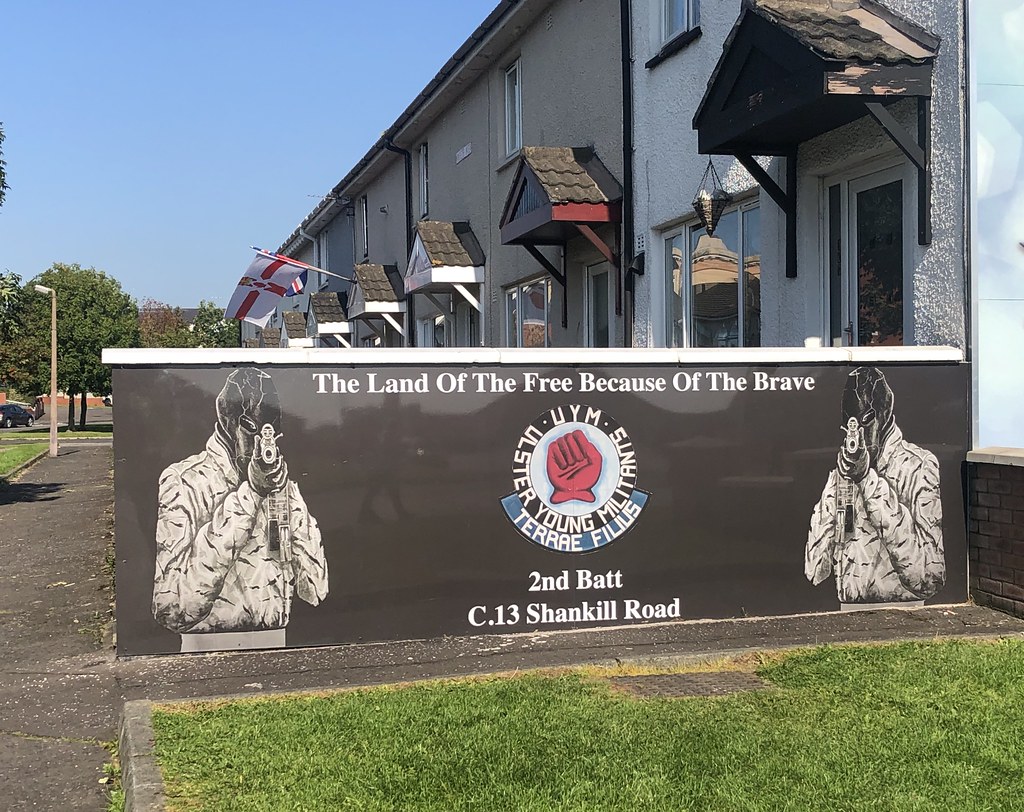 Some of the murals have been replaced with more peaceful messaging, like this one. The original has been photographed and placed in a frame next to the wall. 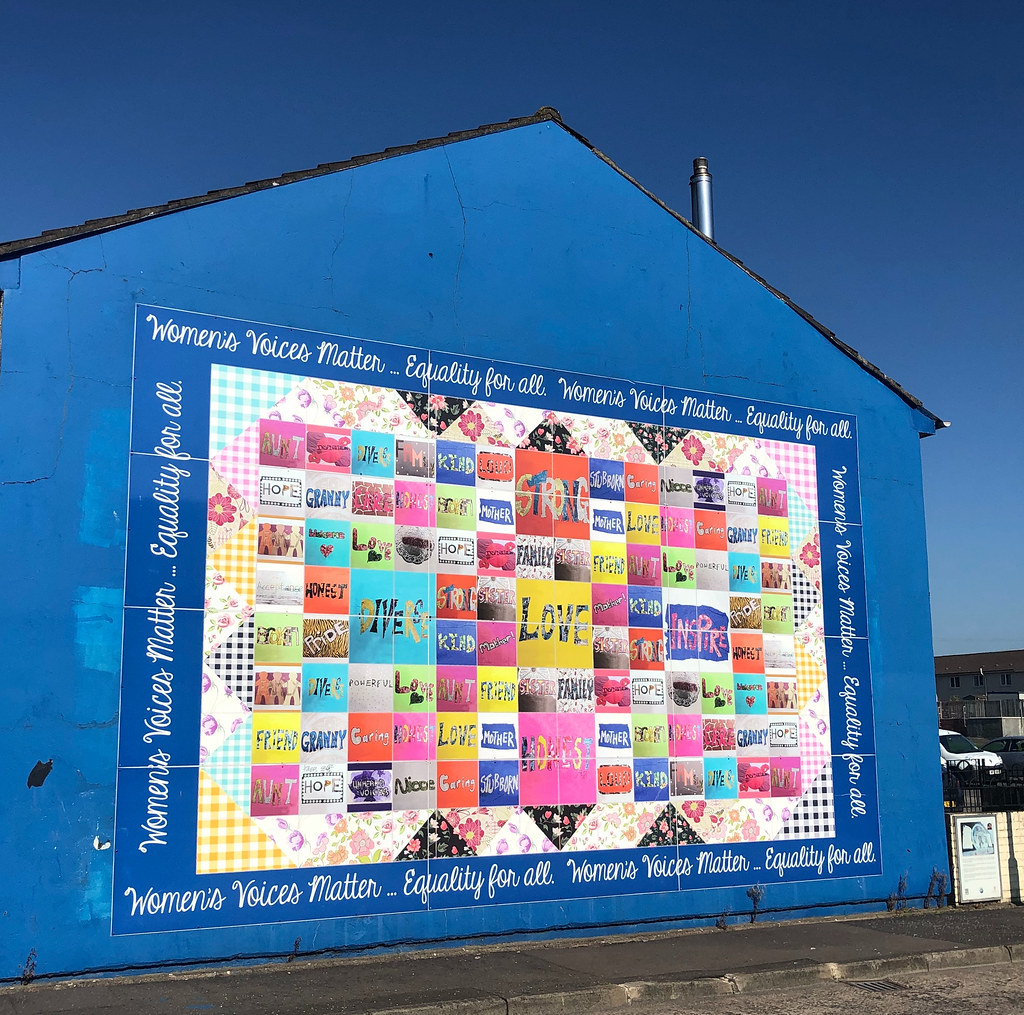 We drove through the gates, there are still gates which get locked each night, into the Irish Republic neighborhood of Falls Road. The massive wall that divides the two areas is ironically called the Peace Wall. You can look up and see the multiple additions to create a taller and taller barricade. As someone who honestly thought this was all rectified in the past I was a bit shocked! 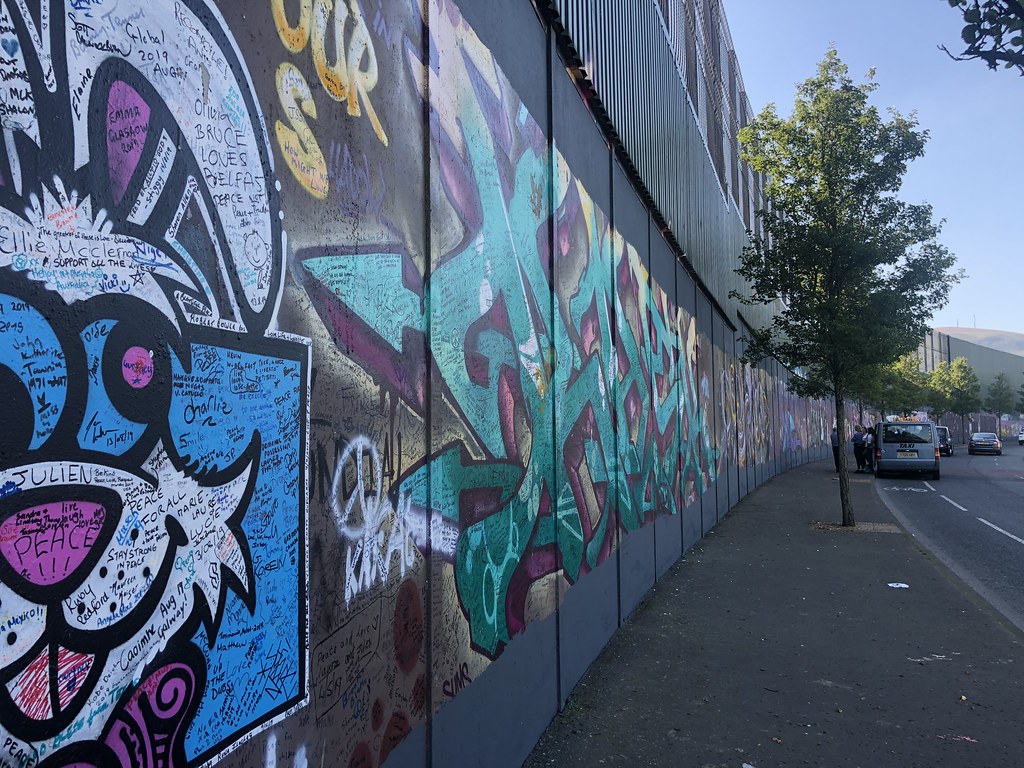 I had been taught that the divisions were based solely on religious differences but learned there was so much more to it than that. There was so much violence here between British Troops and the IRA, most notably during the August riots in 1969. We visited Bombay Street, an area that had been completely burned down before the peace wall was built, and the memorial to those who were killed. 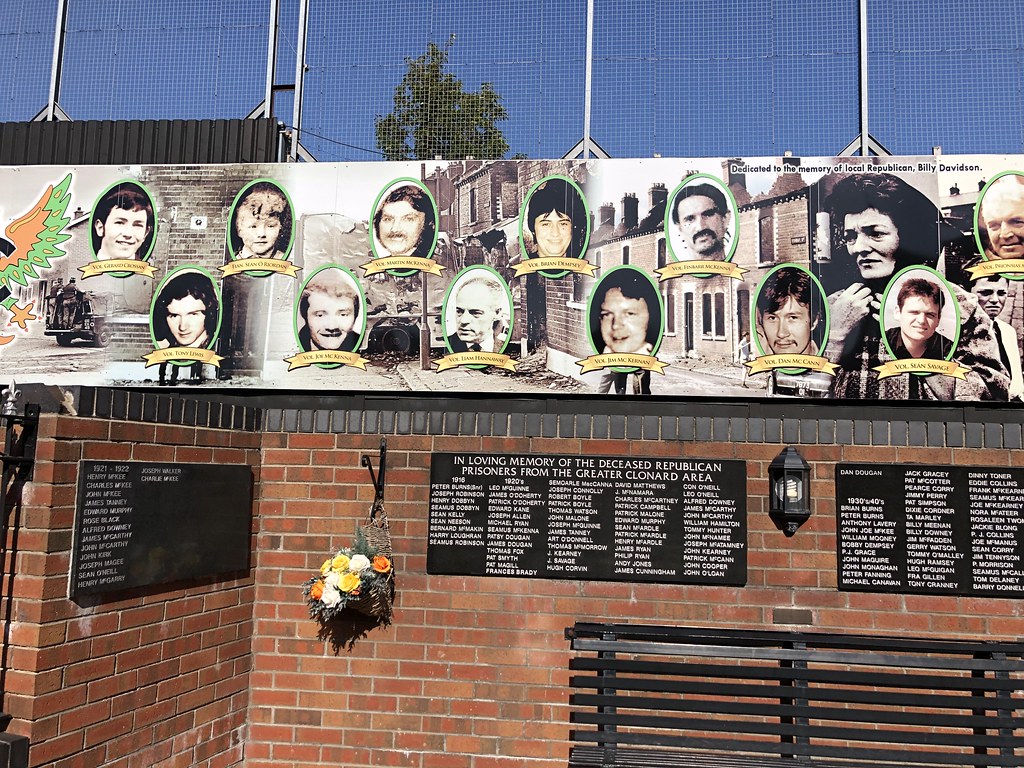 Still to this day bonfires are lit on the evening of July 11th in the loyalist neighborhoods to commemorate the victory of Protestant King William of Orange over Catholic King James II in 1690. And yearly, starting in April and going thru August, members of The Orange Order march through towns to proudly show their loyalist support. These bonfires and parades continue to cause violence. A lot has been settled but there is still so much division. An extremely complicated situation. 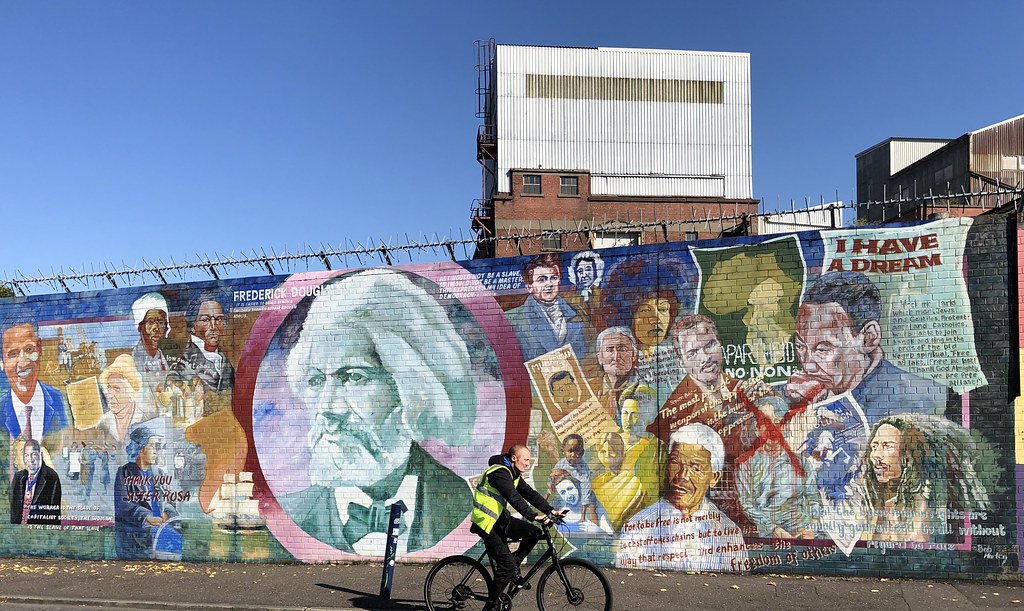 One of our last stops was Northumberland Street which runs perpendicular between Shankill and Falls Roads. Charlie let me out of the taxi so that I could walk along what is now referred to as the Solidarity or International Wall. The murals here reflect people from different cultures and nations and their hopes for peace.  It was a good note to end on. 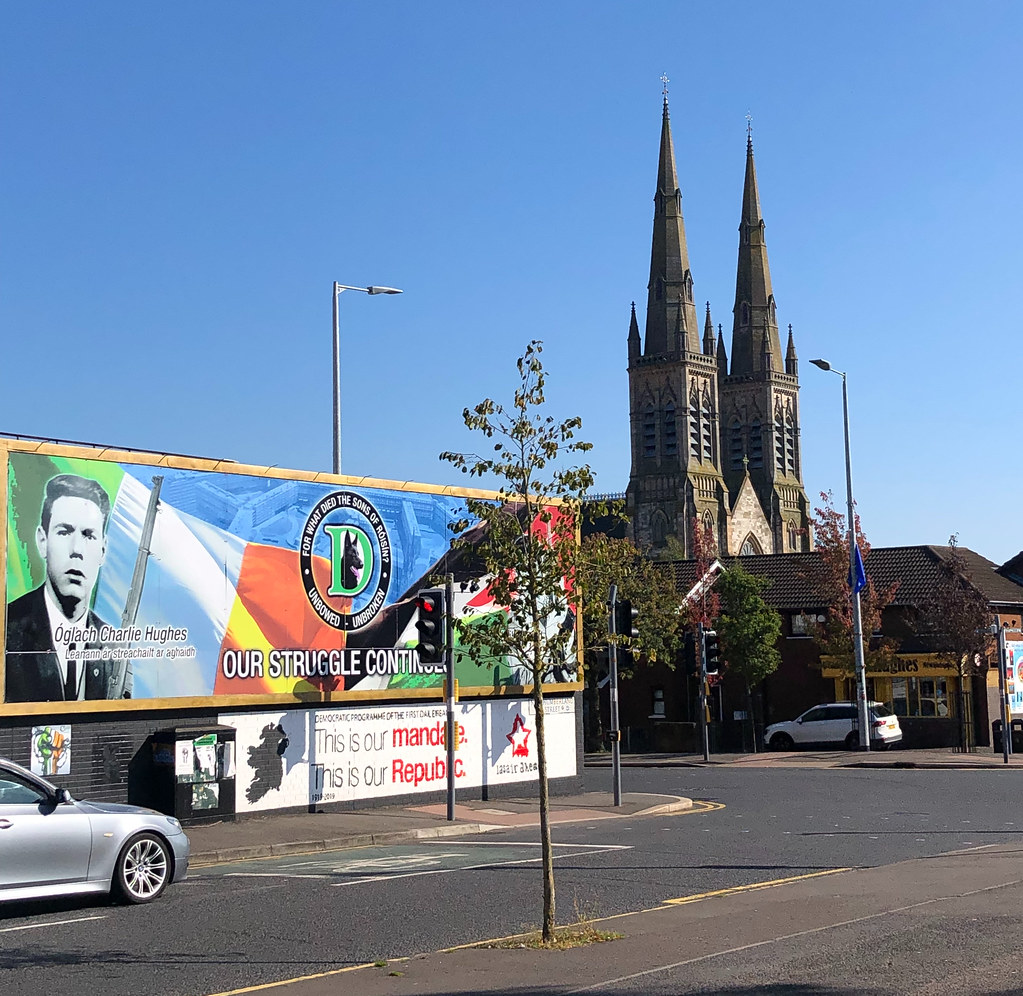 My tour cost £35 and was worth every sterling (cash only).  I learned more in 90 minutes about The Troubles than I had in my entire time in school. I also found Charlie to be completely unbiased when explaining the situations and differing viewpoints to me. Highly recommend. For an extra £5 I had Charlie drop me off at my next destination, the Titanic Museum. 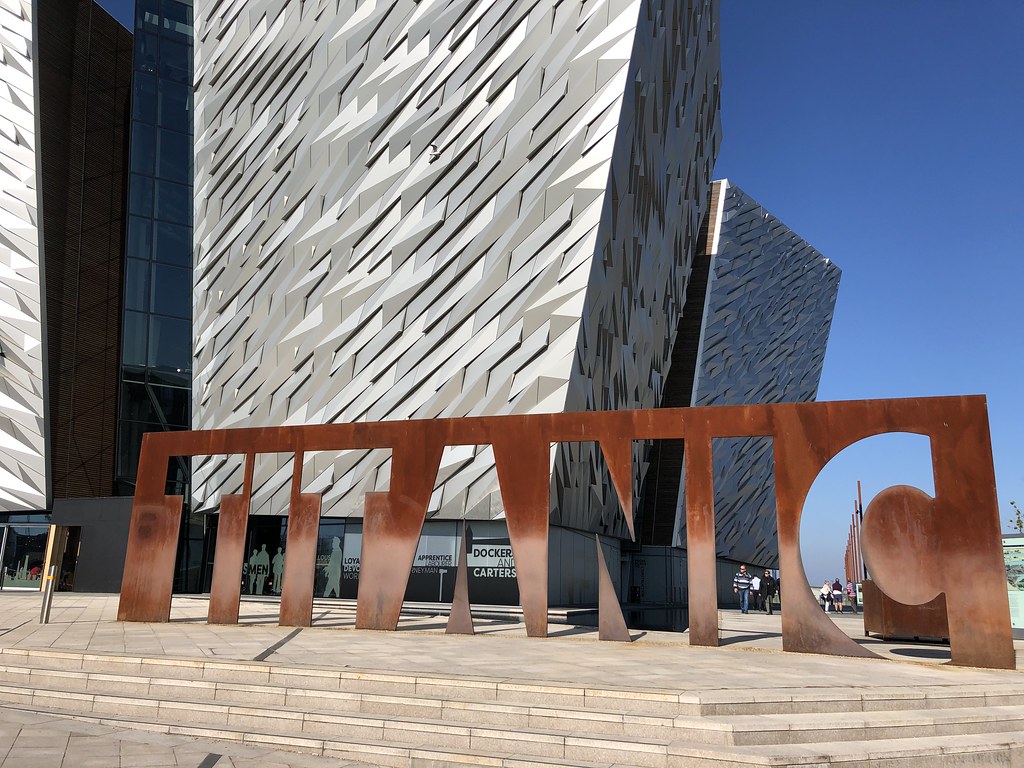 The taxi tour was obviously a bit heavy so I took a little time inside the museum snack bar with a pint to relax before starting my self-guided tour of the museum.
The museum is located in the actual spot where the ship was constructed. It starts with some history of the relationship between Ireland and the UK; there are lots of great photographs from the early 1900's. It then moves into the design and building of the Titanic by Harland and Wolff, the 128 year old company which is still around today. 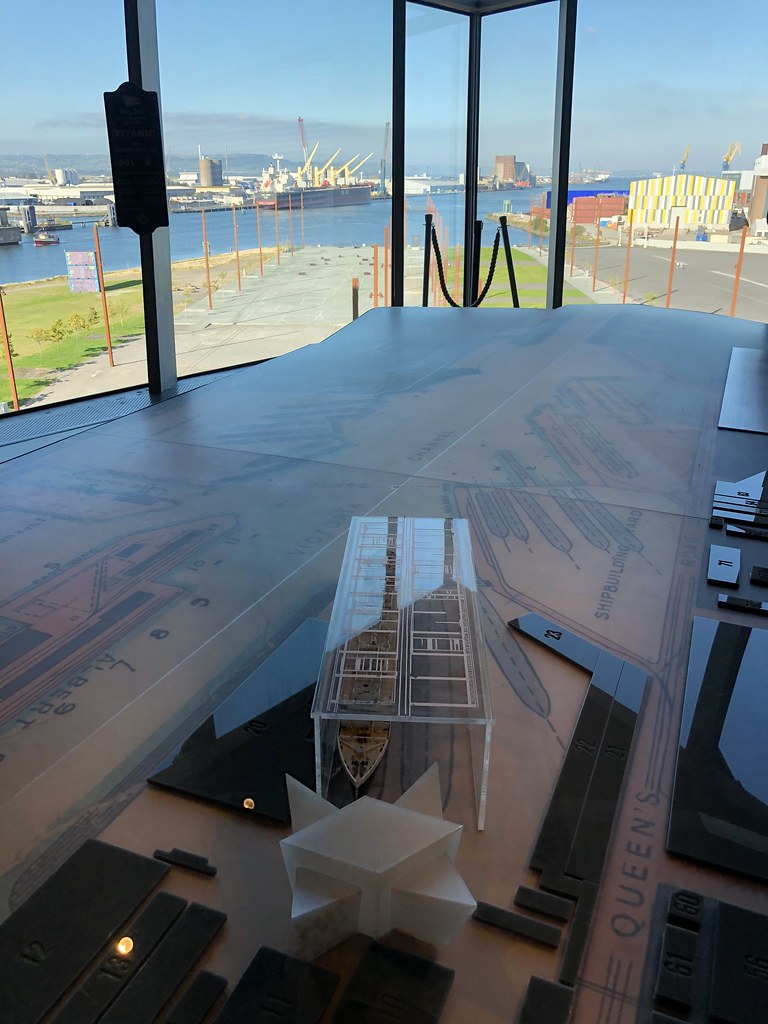 At one point you take an elevator up to the same height of the ship and then board a 6-seat car which flies you through and around a simulated shipyard. It's a bit Disney-esque but also very fun and a cool immersion experience. 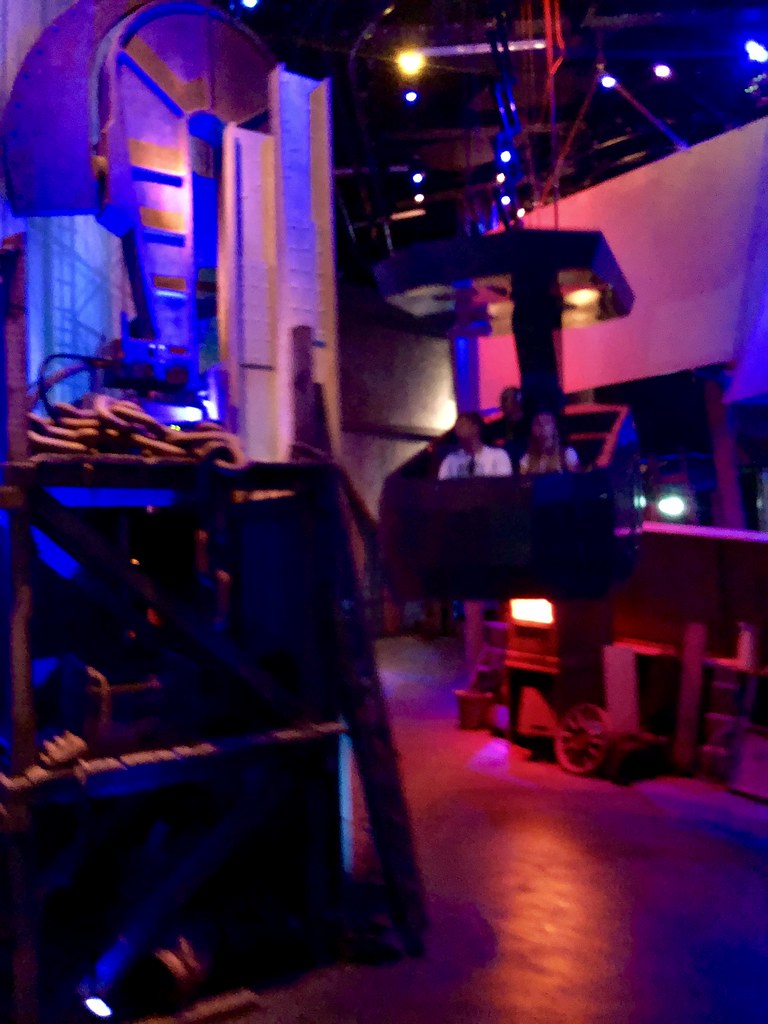 The timeline continues with stories of the launch party of the ship from the very spot you are standing. And then there are galleries that are filled with recreated staterooms, dishware, furnishings, photos, and even CGI of the interior spaces. 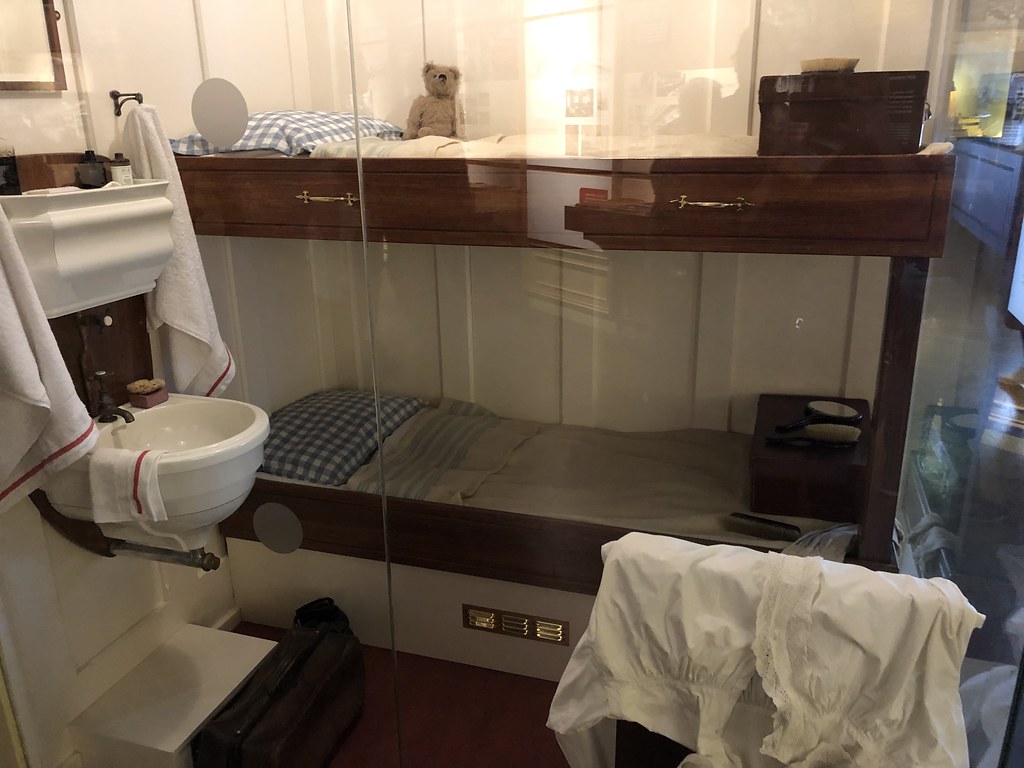 There are stories of the people who were on board, and of course the many who were lost when the ship sunk. And at the end there is an awesome video projecting under a glass floor camera footage of the wreckage when it was found. I loved this! 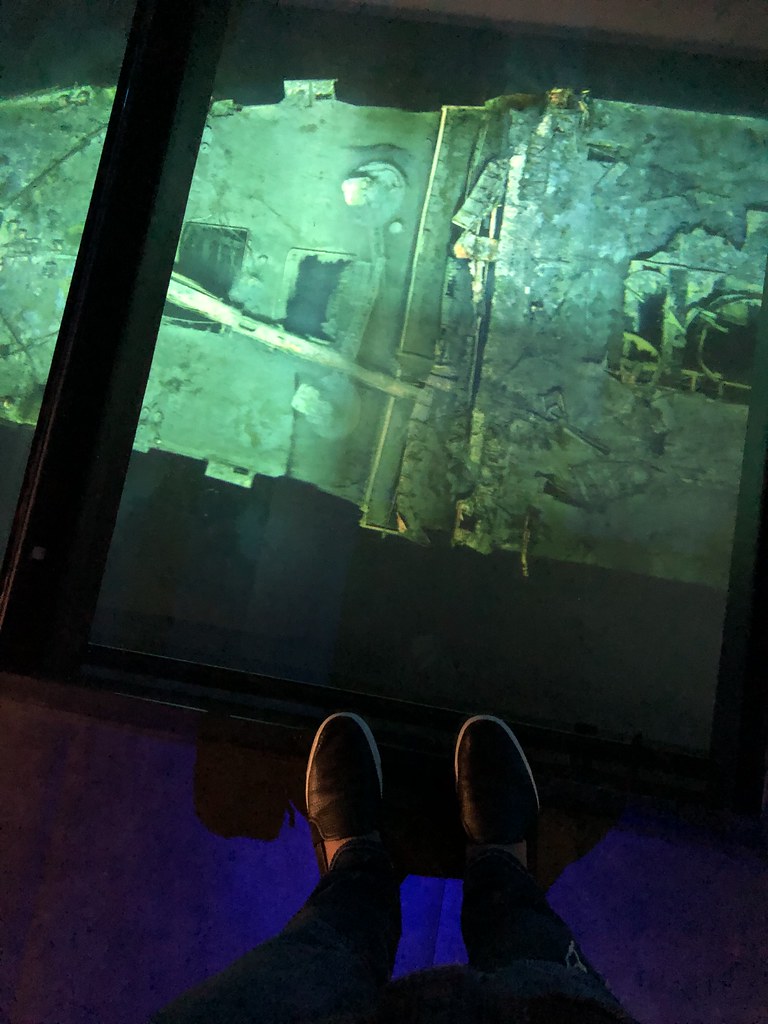 I thought the museum was fantastic! I was also ready for a bit of a lie down so I headed back to my hotel to rest and get changed for dinner.

My hotel choice was based on me needing a stay so that my Marriott points wouldn't expire. The hotel and my room were basic but I had a waterfront view of the Titanic Museum which I loved. 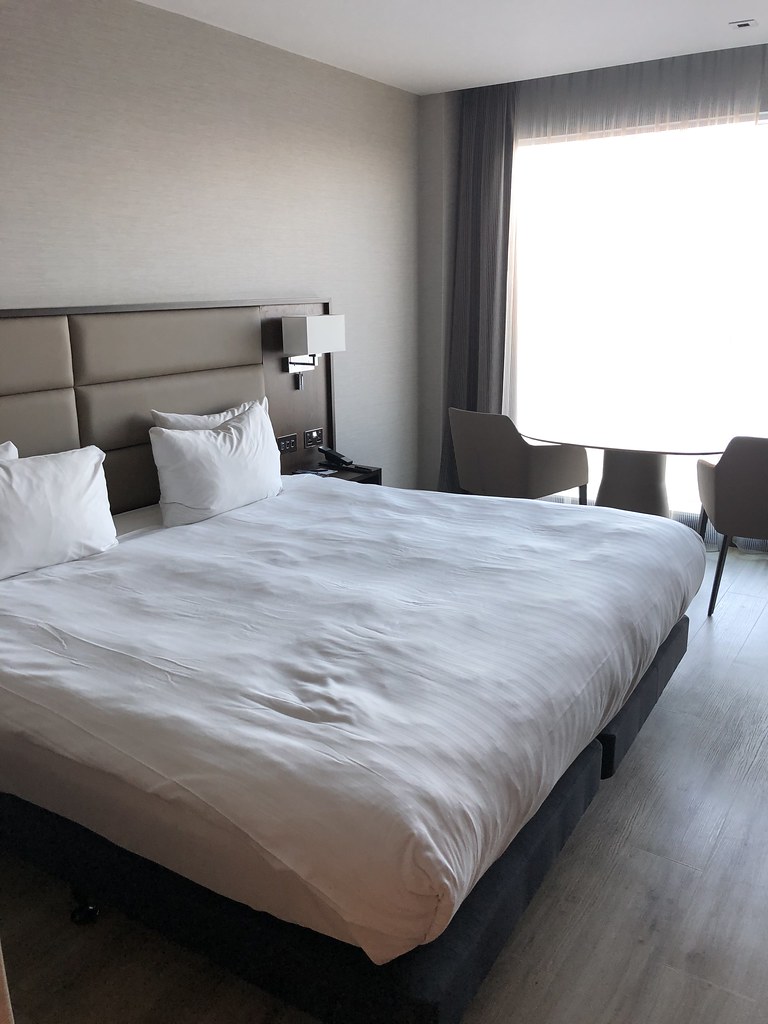 Soon it was time for a cocktail! My destination was the well-known and historic Merchant Hotel and their Cocktail Bar. 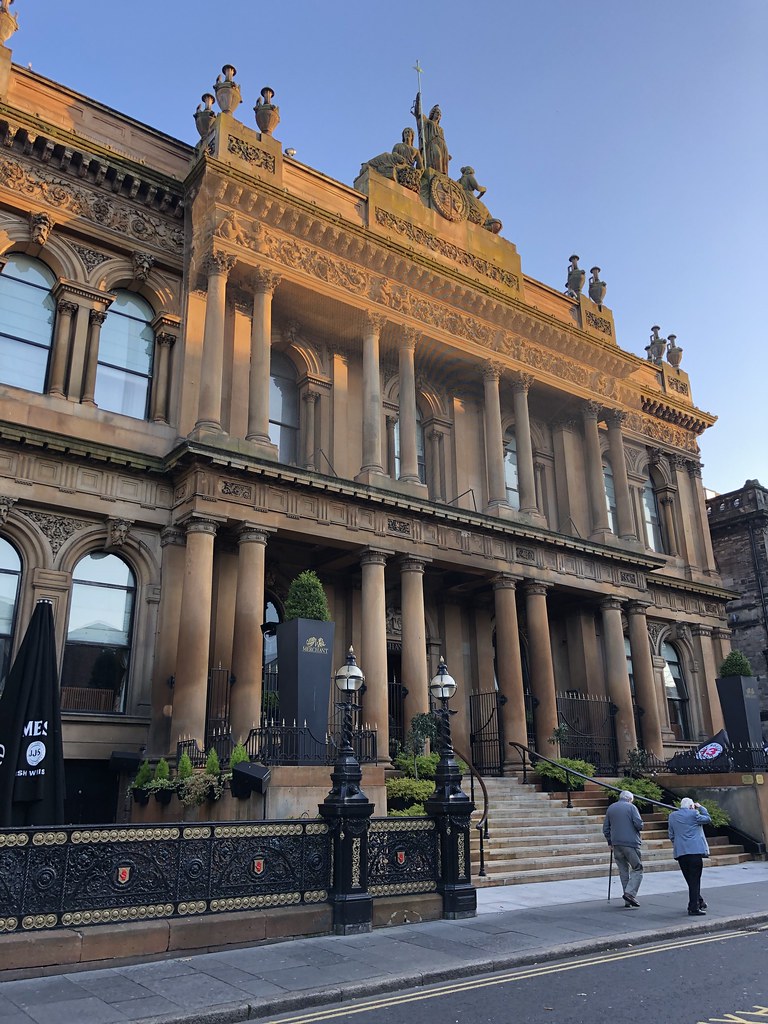 The building dates from the mid 1800's and was originally built as the HQ of Ulster Bank. The "red hand of Ulster" can still be found in the wrought iron. Now as the only 5-star hotel in Belfast it is an ornate posh locale for some of the best cocktails in town. 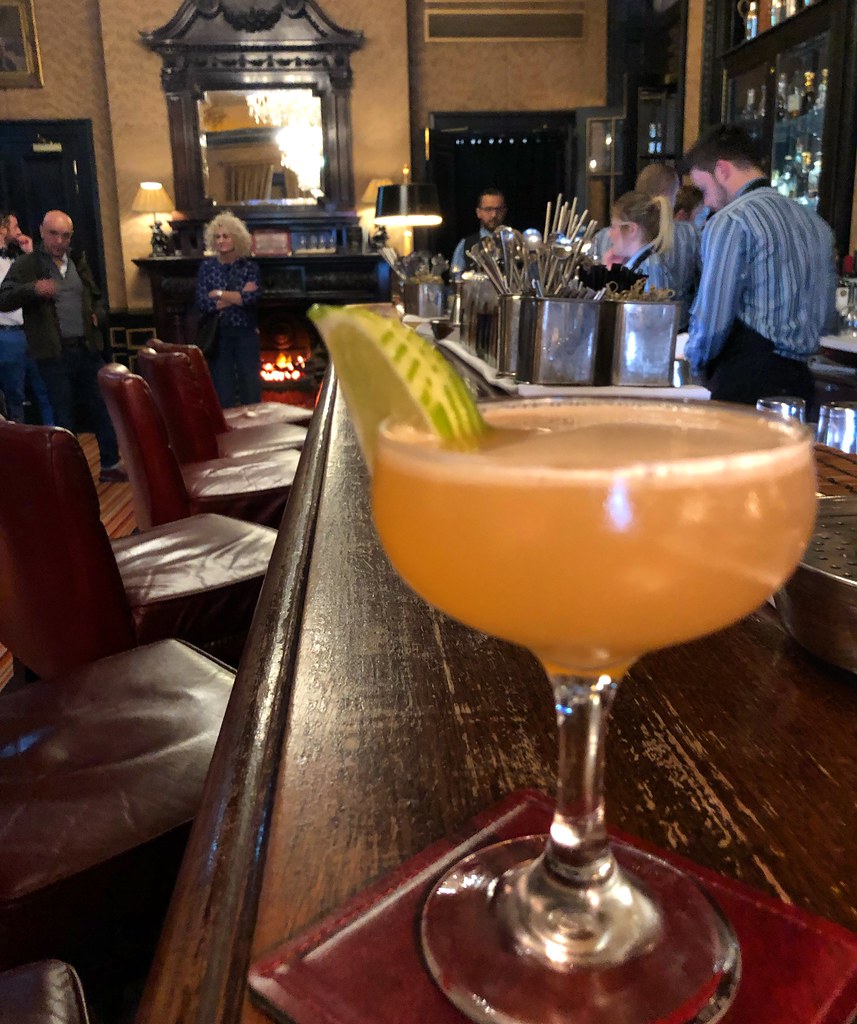 I had time for 2 rounds before leaving to walk to Ox, the 1-Star Michelin restaurant I had chosen for dinner. On my way I passed a lot of street parties as an event called Culture Night was happening around the city. 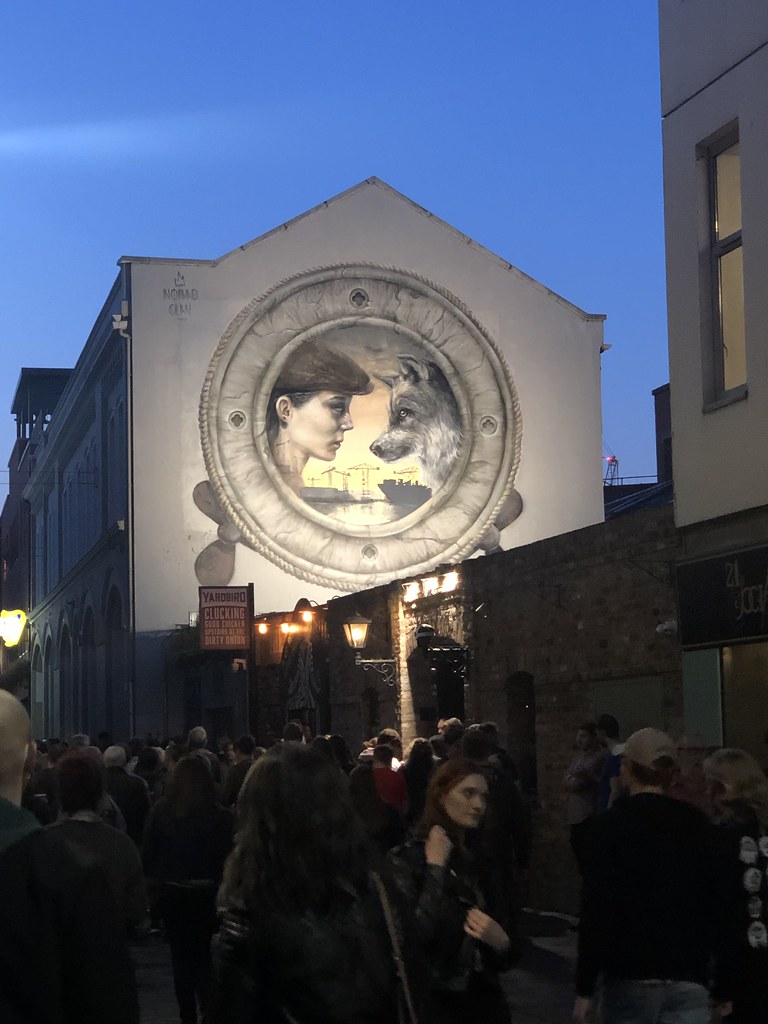 Ox is right on the River Lagan and has an uber-seasonally driven tasting menu. There is a choice between a "regular" or vegetable tasting menu, I chose the regular for £60,  I also had a choice between a regular or Premium wine pairing, which I chose the regular for £35. Both exceptional prices! The actual dishes weren't revealed but there was a list of all the ingredients they might be using for the evening which I thought was clever (also giving diners an opportunity to call out anything they are allergic to.) 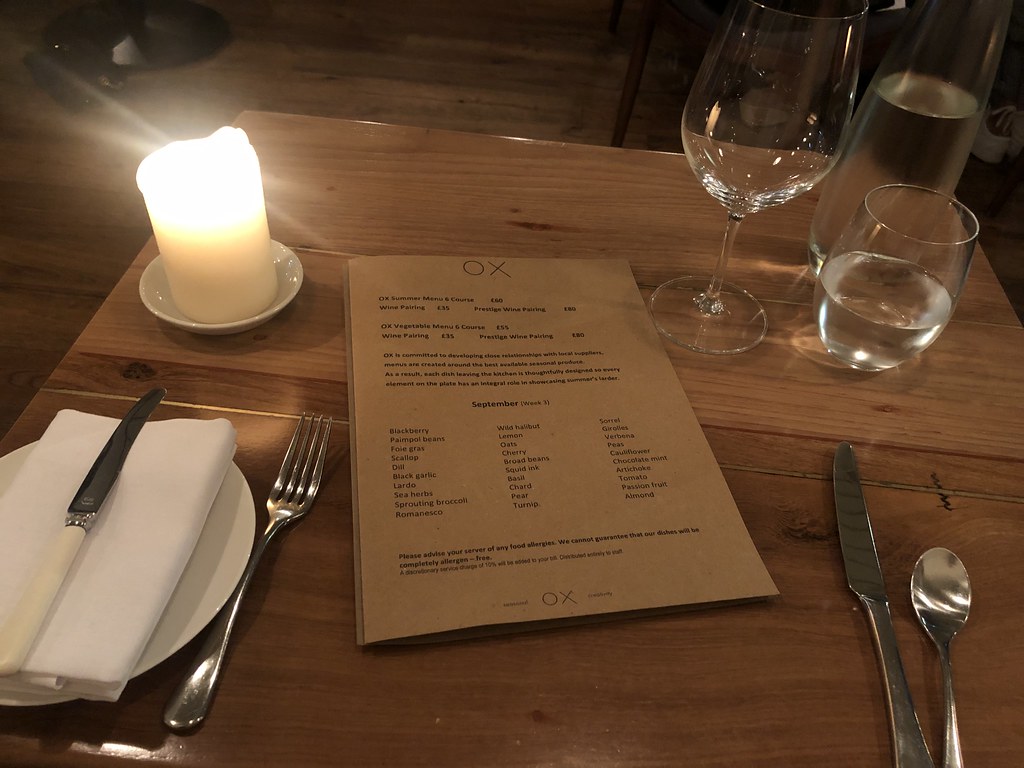 From my first bite (of peas, foie gras, verbena and a gougere filled with local cheddar and beer) I absolutely loved the style of the food. 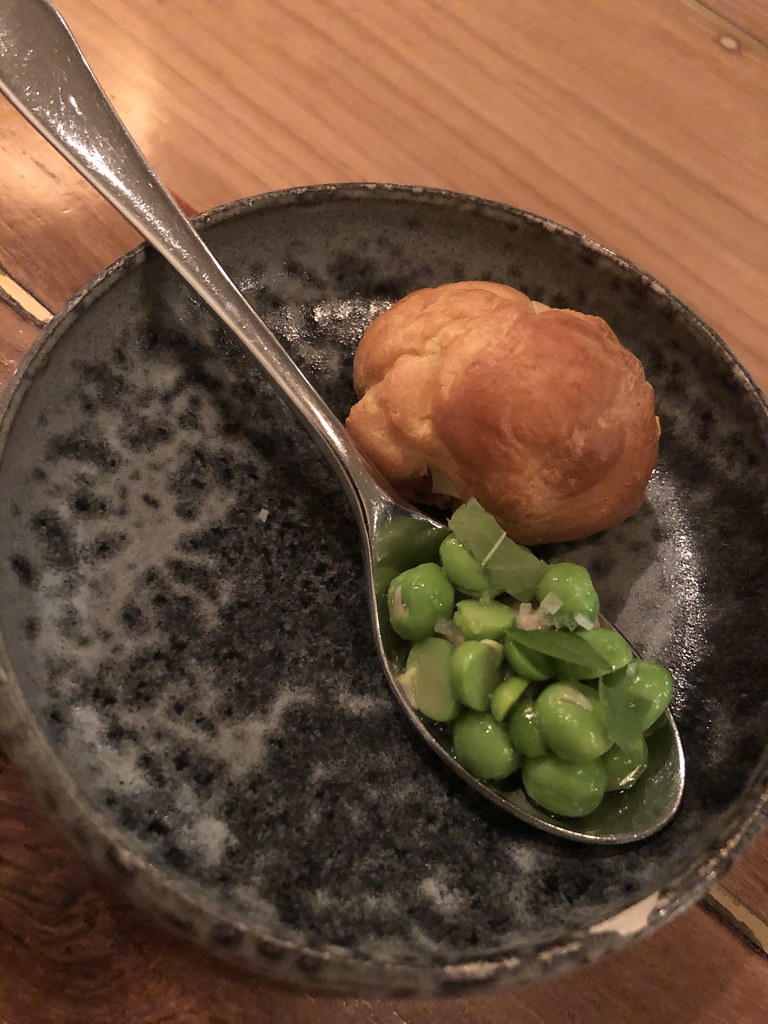 The service unfortunately was bad, on the verge of being annoying in not knowing much about the ingredients or the wine they were pouring. 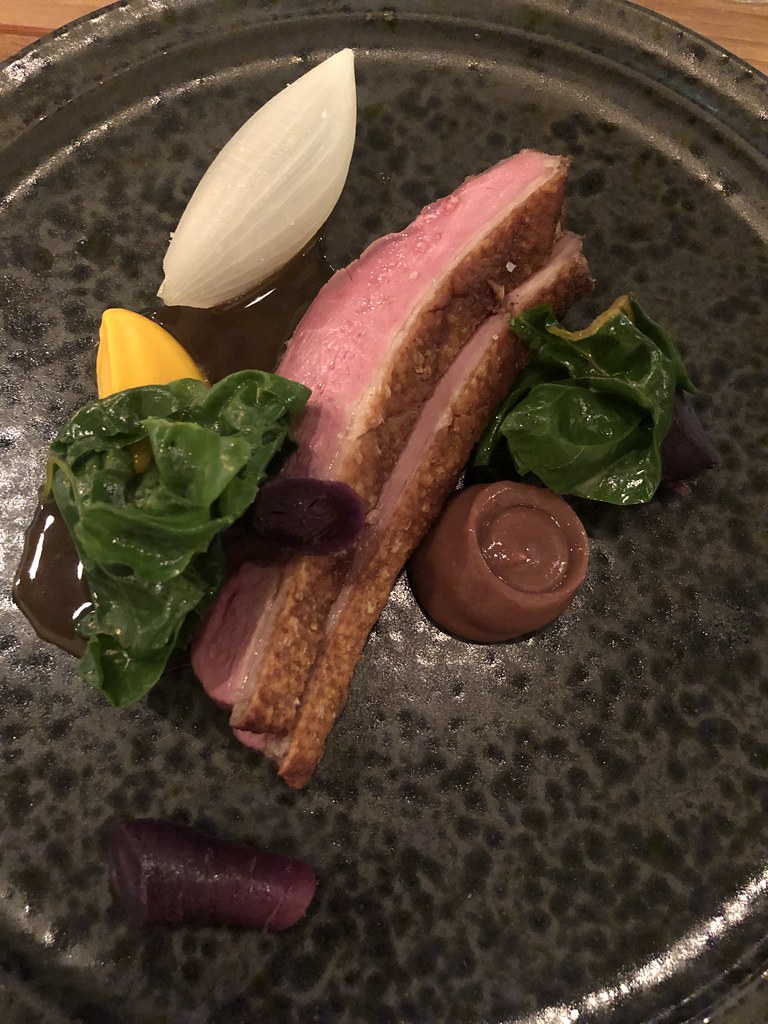 Hopefully it was just an off night for the staff because really the food is delicious! The space is very simple and felt almost Scandinavian, there was a hygge feel to it. Dinner was excellent and an excellent value.
It was a lovely walk home with the moon rising over the Titanic Museum and the water. 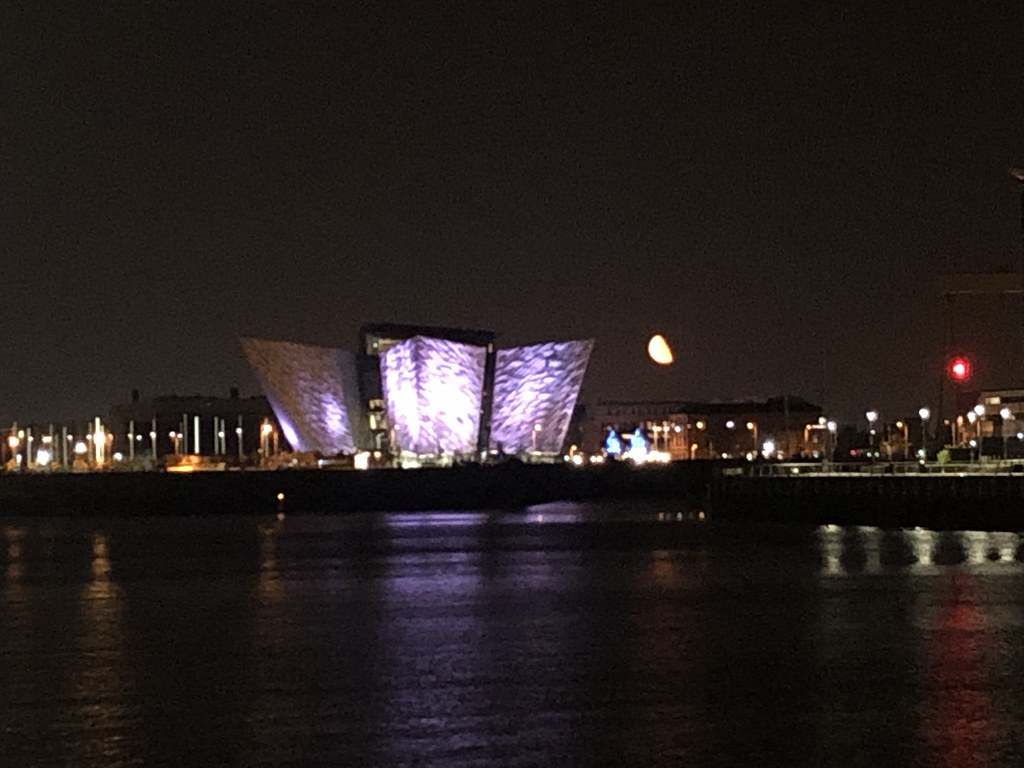 The next morning I had breakfast in the hotel and then took a taxi to the bus station. This taxi only took cash and I didn't have much left so unfortunately he ended up getting shorted a bit. There wasn't anything I could do about it as he wasn't interested in my Euro but something to keep in mind if you are traveling there.
There was a small queue on the sidewalk as the bus hadn't arrived yet. But it was just a quick wait and then the driver pulled up, checked everyone in (I had bought my £10 ticket online in advance), loaded the luggage, and away we went. It was a 2-hour ride to the Dublin airport where I would be picking up my rental car to start my drive around the country. 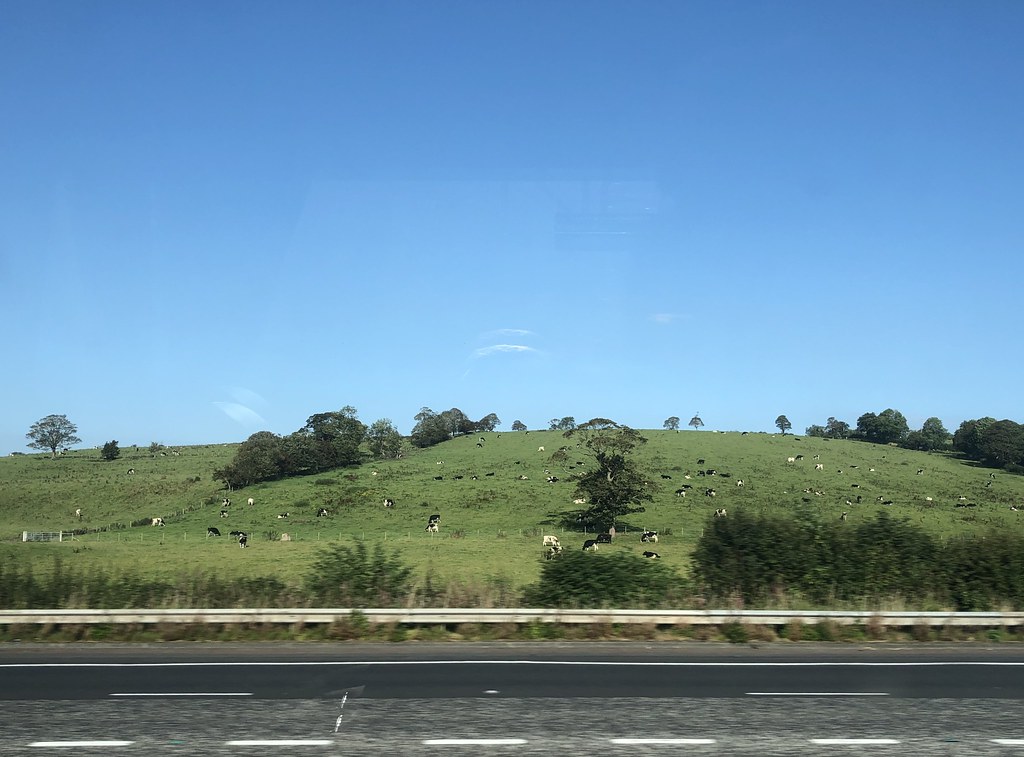 24 hours isn't much, but I feel like I made the most of my time in Belfast. It's a lovely city, especially when the sun is shining, and I'd absolutely return given the opportunity!
**As I visited all of these places before the COVID-19 pandemic, please double check on opening hours. And fingers crossed these businesses all stay in business!**
All photos from Belfast here.
Other posts from this trip: