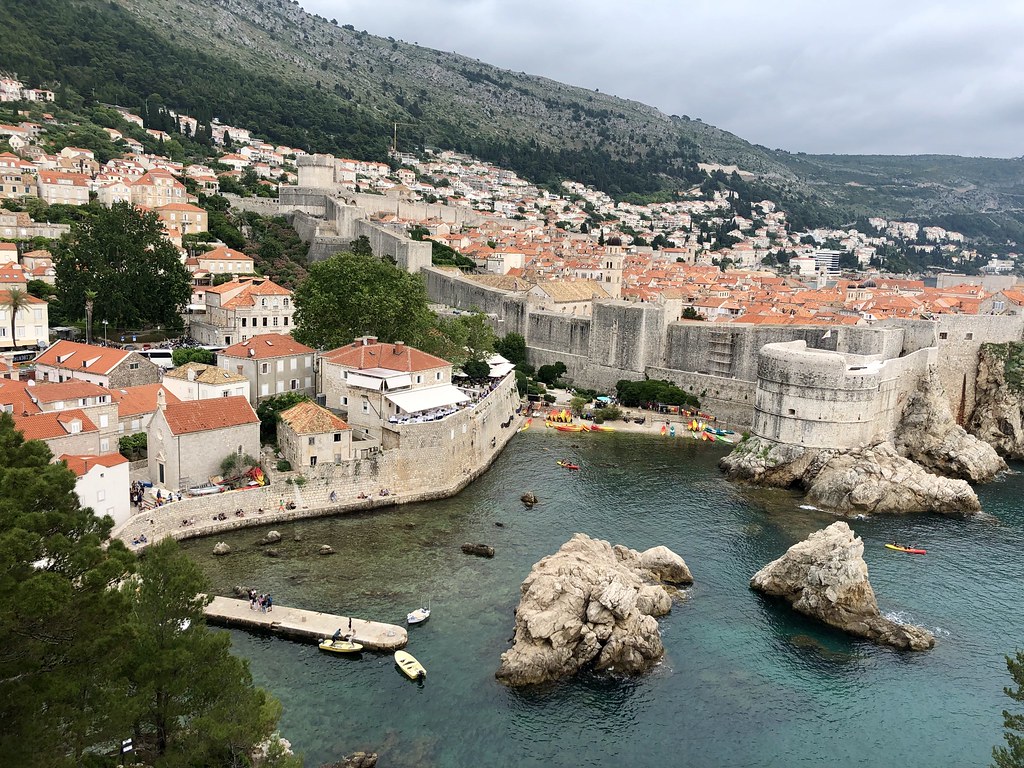 Aaron and I departed Split at 7:40am on the fast ferry to King's Landing aka Dubrovnik. It's basically a hydrofoil with large comfortable seats and racks for luggage. And even though it is called the fast ferry, it still takes 4+ hours. 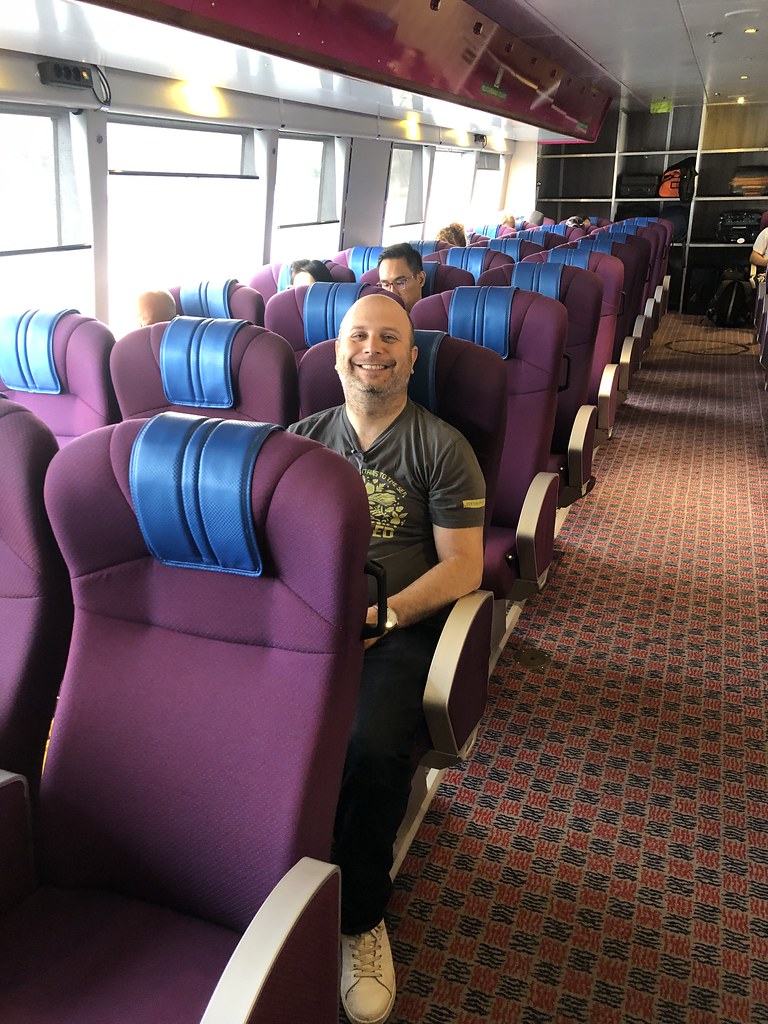 While on the ferry a woman sat next to me and commented that we were in the same restaurant in Hvar the week prior. I asked how she could be sure and she said "you are in my photos at lunch!" haha!! Not only was I in her photos but I was actively looking at their dishes to see what they had been ordering! Totally me!

What to do on our first day in the capital of the Seven Kingdoms? A Game of Thrones tour to introduce us to all things King's Landing! We met our small group of 7 (coincidence?) at the Amerling Fontana, a lovely fountain created by Croatian sculptor Ivan Rendich, just outside the Pile Gate. Our guide Ivana was holding a Lannister banner! She was super enthusiastic about both the show and her hometown's part in it. 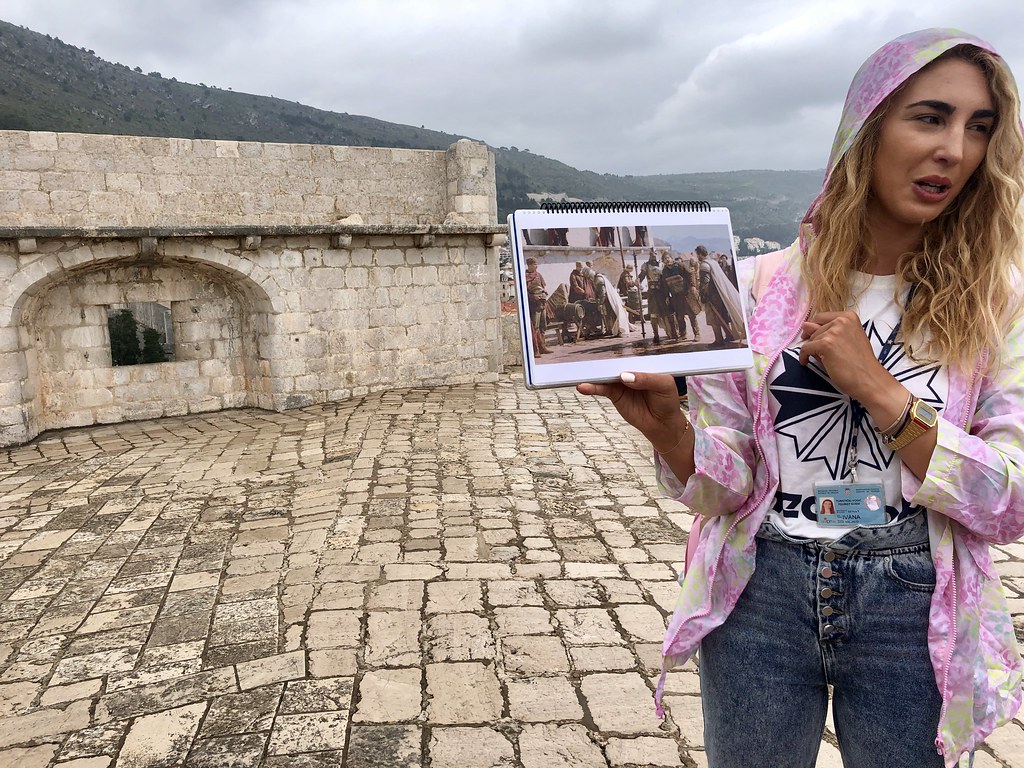 We immediately proceeded up to The Red Keep, aka Fort Lovrijenac. Ivana had prints of the scenes from GOT and would lead us right to where they were shot, reminding us of key events, and explaining how things were done. There were funny tidbits like Joffrey's exit in one scene was him actually walking into the women's bathroom! I used it but found no evidence of him there. 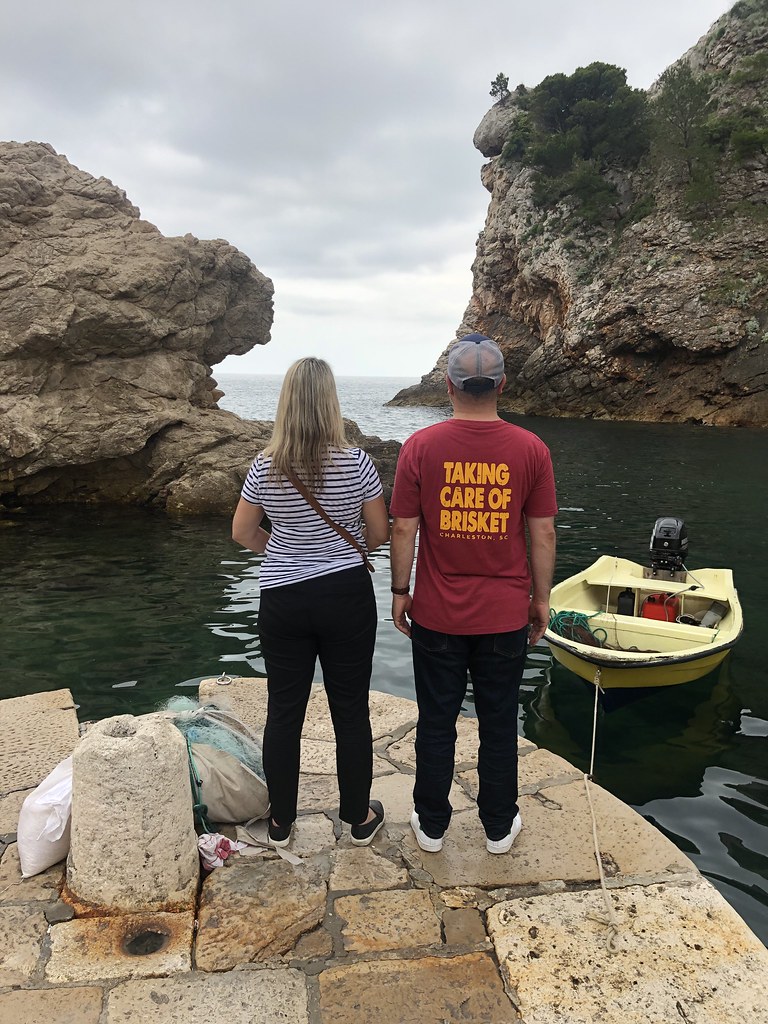 From the fort we went down to the West harbor where it is easy to recognize many shots. Almost everyone took turns recreating the scene of Sansa speaking to Littlefinger at the harbor! Totally geeky fun!

From here we passed through King's Landing Gate on our way to Littlefinger's brothel and on to Cersei's Walk of Shame staircase! Ivana had brought props so you know I had to walk those stairs while Aaron rang the bell! She also informed us that public nudity is illegal in Dubrovnik. SHAME! 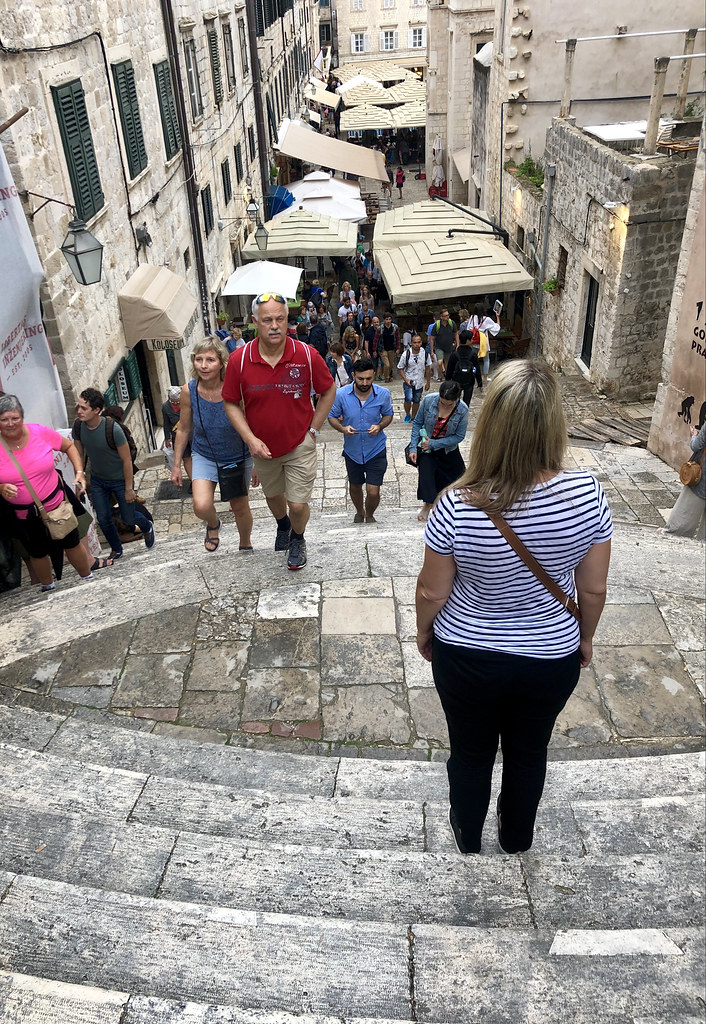 Once everyone had a chance to play with the various swords (replicas from the show, not real ones) we continued on to Qarth Palace aka Rector's Palace. 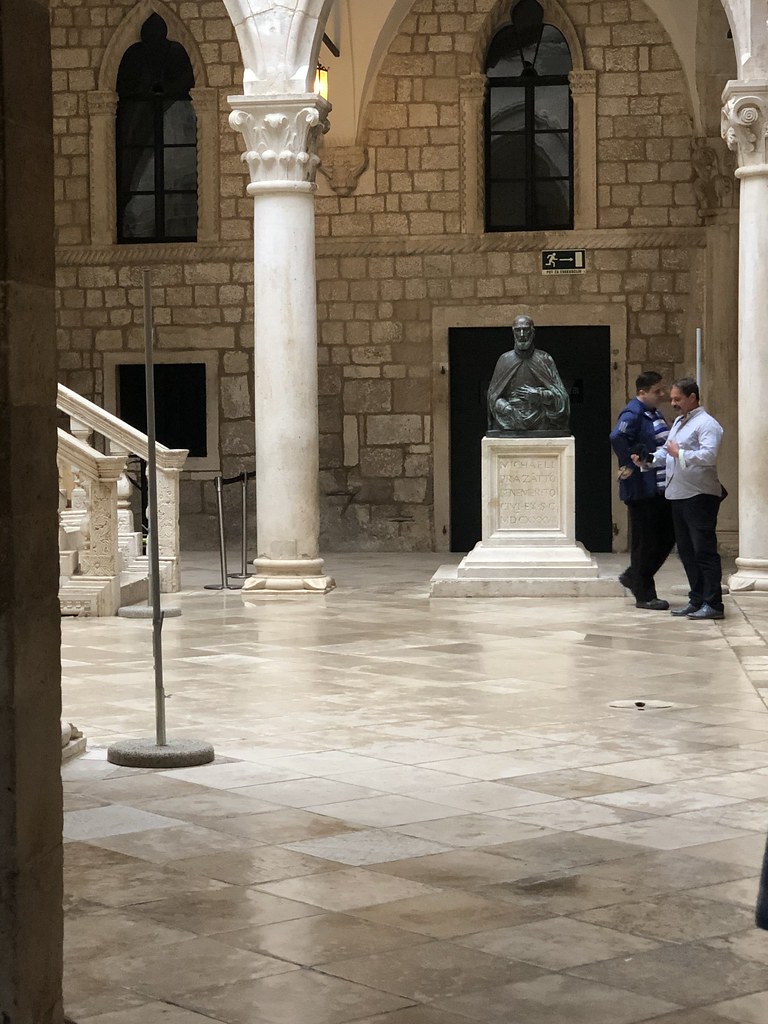 We didn't go inside the Palace, but we were able to see the courtyard and the bust which is in the scene where Daenerys asks the Spice King for the use of his ships. We continued to be surprised as how little was done to the sites!

Carrying on thru the streets of King's Landing, we passed where the market scenes were shot and also more of the path of the Walk of Shame. 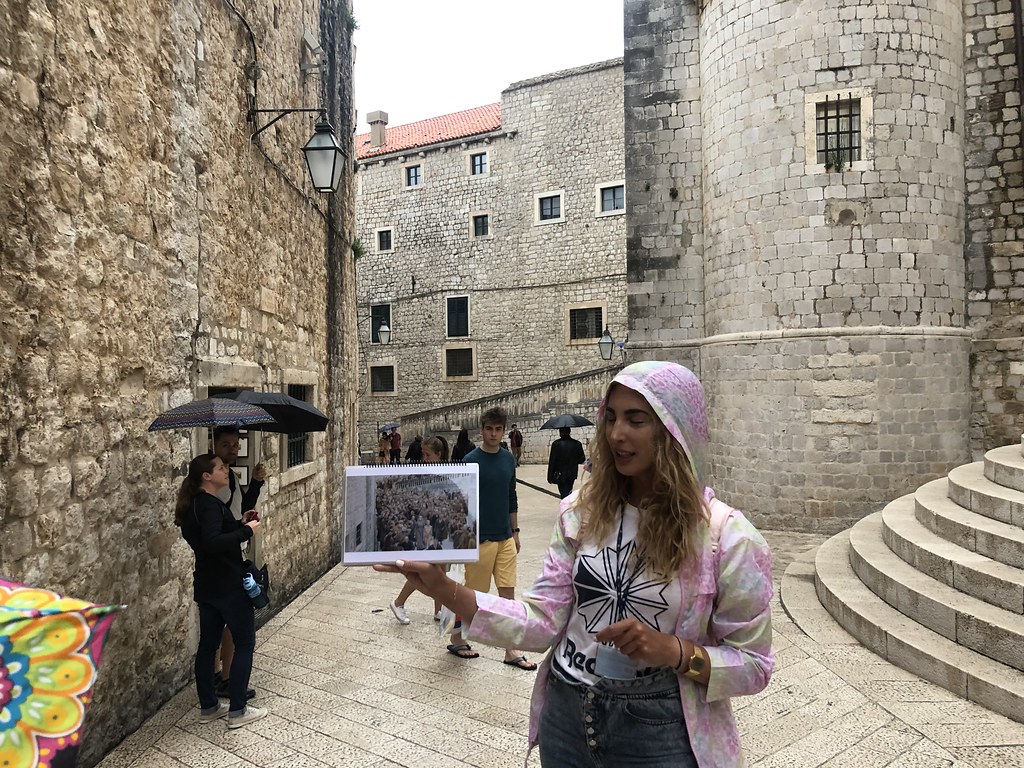 Ivana continued to entertain us with stories from filming (a few of her friends were extras), quiz us on the locations and scenes, and talk about how the residents of Dubrovnik felt about living in King's Landing and the success of the show.

We ended our tour, as Cersei ended her Walk of Shame, passing through Ploče Gate and over the brick bridge with the view of the harbor. 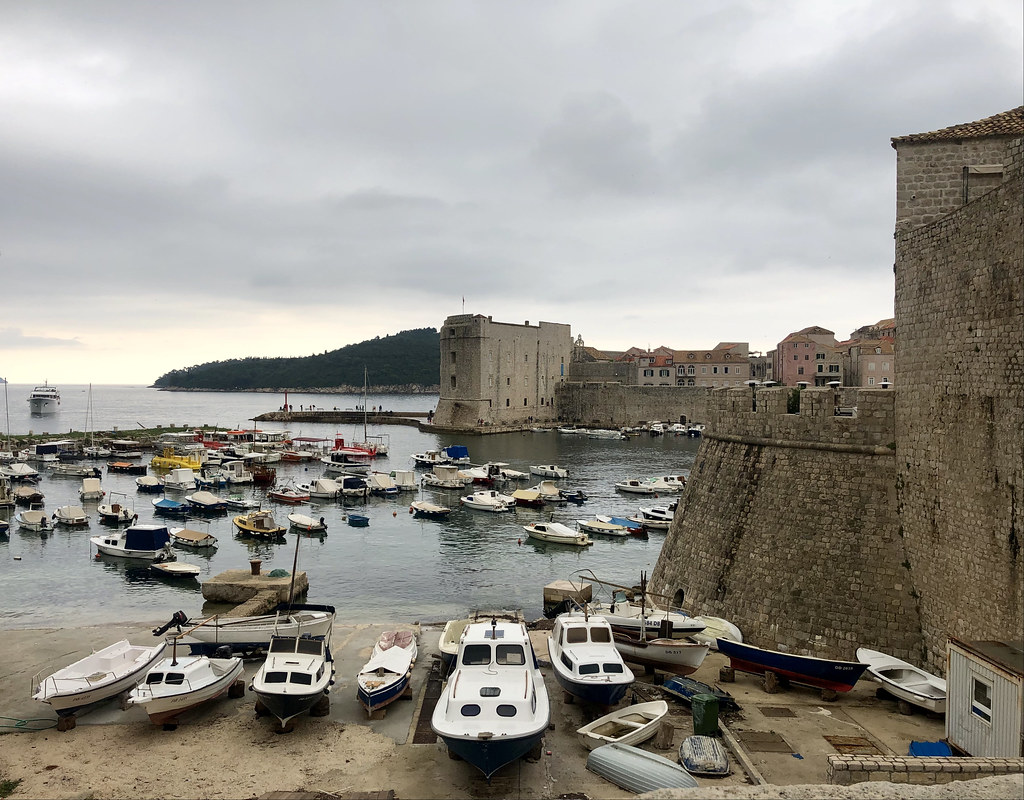 We had such a great time on this tour! We paid about $50 and it lasted about 2 ½ hours. And can we talk about all the stairs? This tour is best for those who love a good urban hike! We ended up logging in over 30 flights!

Now that we had explored King's Landing, it was time to spend a few days in Dubrovnik :)

All photos from King's Landing here.


Other posts from this trip: