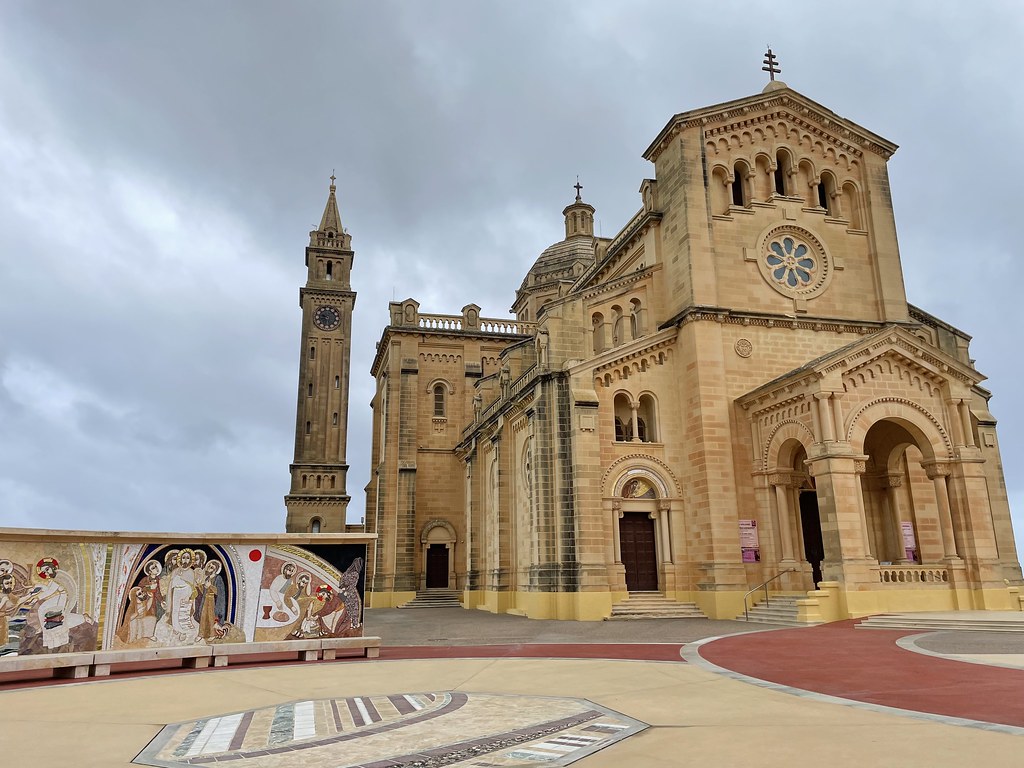 For such a tiny island, there are a lot of sights to see on Gozo. And right down the street from our rental house was one of them; the Basilica of Ta' Pinu. This huge church is a shrine to the Virgin Mary; there isn't anything else around it except for a parking lot, so it's a bit unusual just sitting out in the middle of a field. The site was chosen because a woman by the name of Carmela Grima claimed she heard the Virgin Mary speak to her there. She is entombed behind the altar as a thank you to for her faith.

Outside of the church are mosaic panels with biblical stories which were created by artists from around the world. The work is quite beautiful.

A very short drive from our house in Ghammar is the Ta'Dbiegi Crafts Village. Local artists each have their own space and most are actively creating while you are there. It's a little touristy but we found some interesting stuff and also learned about the declining lace making industry. The owner of the lace shop wouldn't even let me take photos of their product as he said big manufacturers steal the local designs! 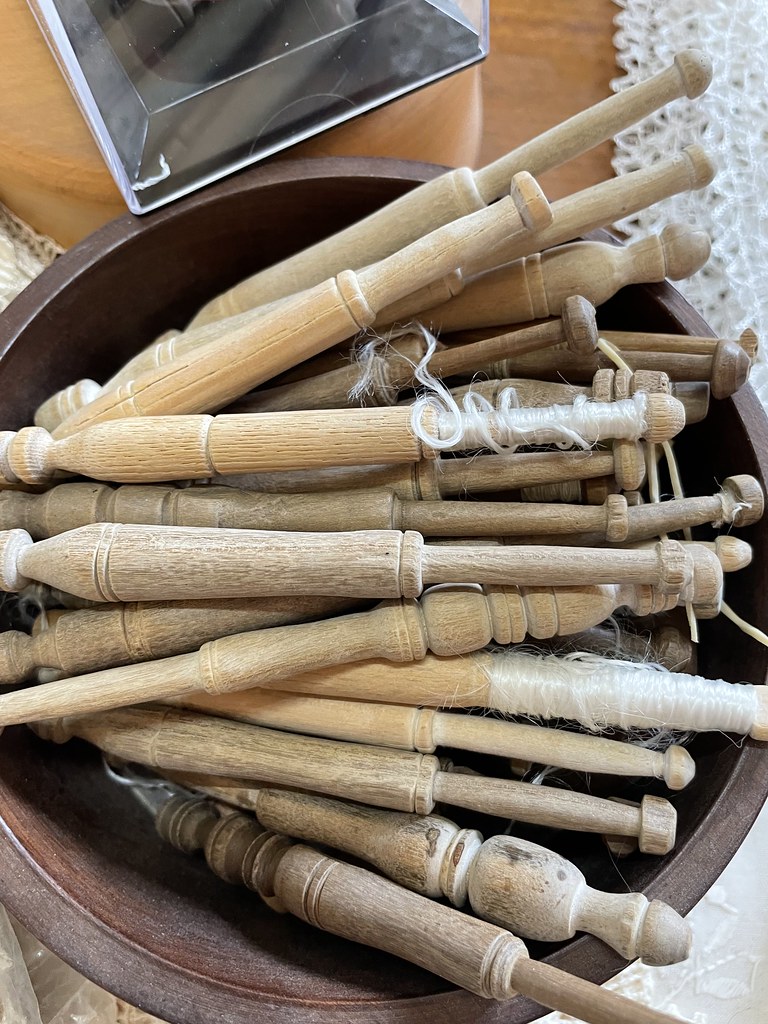 While we were all shopping Thibault found a whole herd of cats! 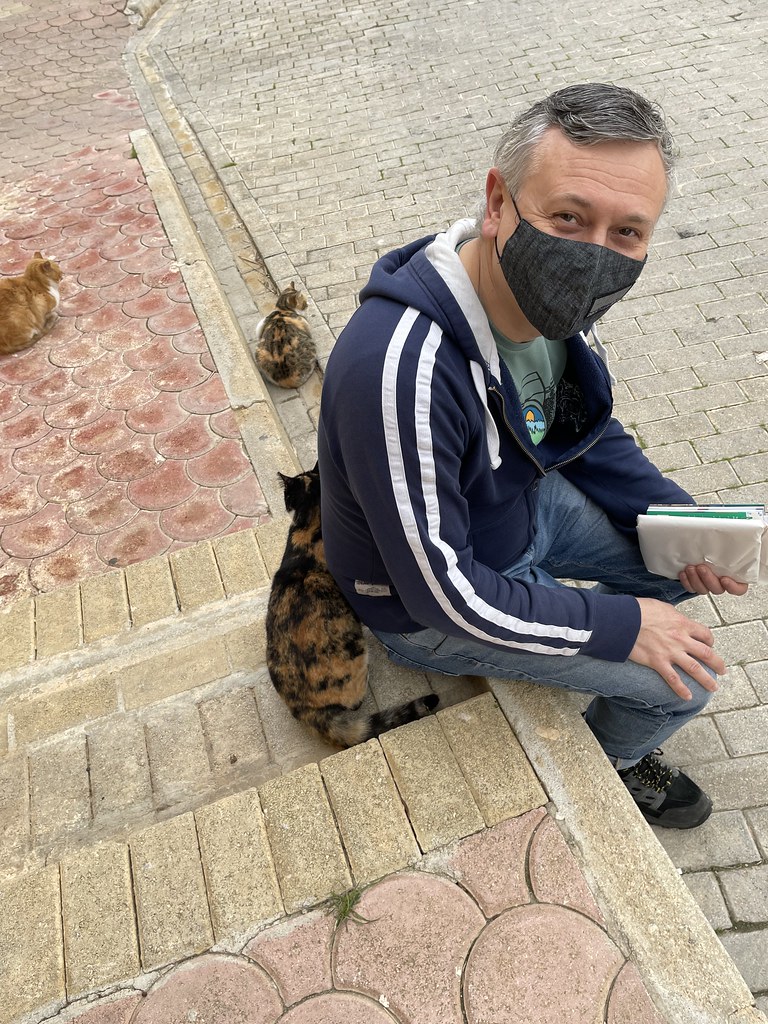 After our shopping we drove up to the north part of the island to Wied il-Għasri. This is quite a unique place with a sea canyon cutting through very tall cliffs and ending at a tiny beach. 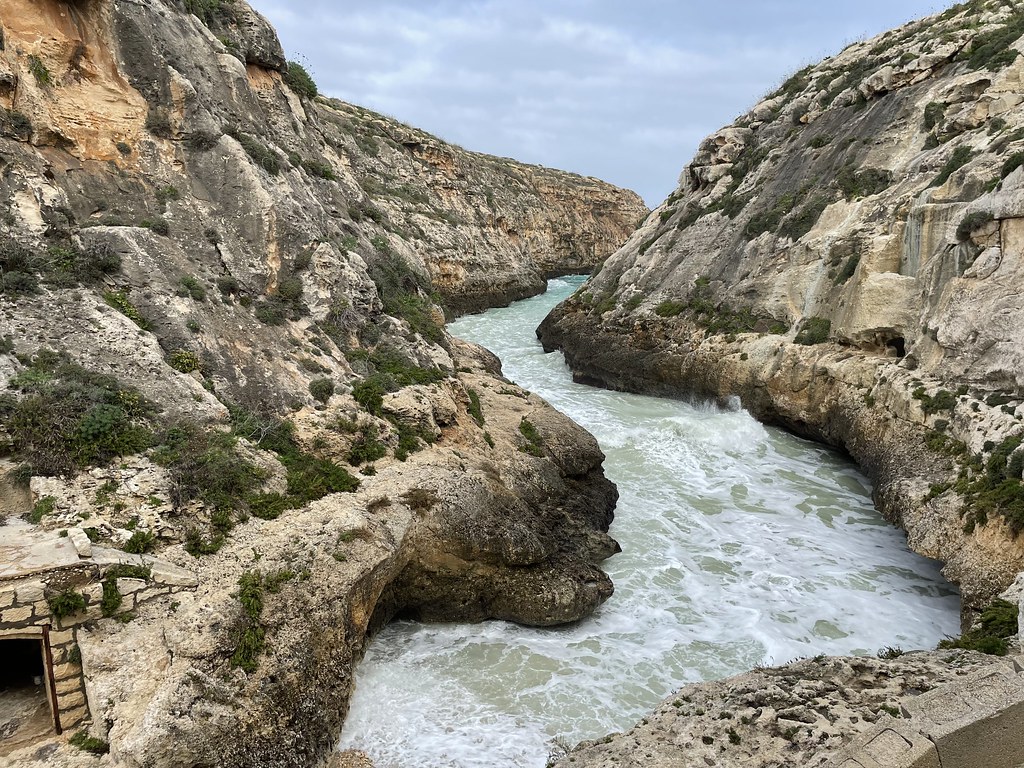 There are about 100 stairs down to the beach but it isn't very steep. It was really cool to see the gorgeous blue water rushing in and out through the channel. There is a cave that people dive in and it's also a popular spot for snorkeling in the summer when the sea is calmer.

After checking the area out we walked back up and out onto the limestone cliffs. Wow, the views around here are so stunning! And there were so many fossils!!! 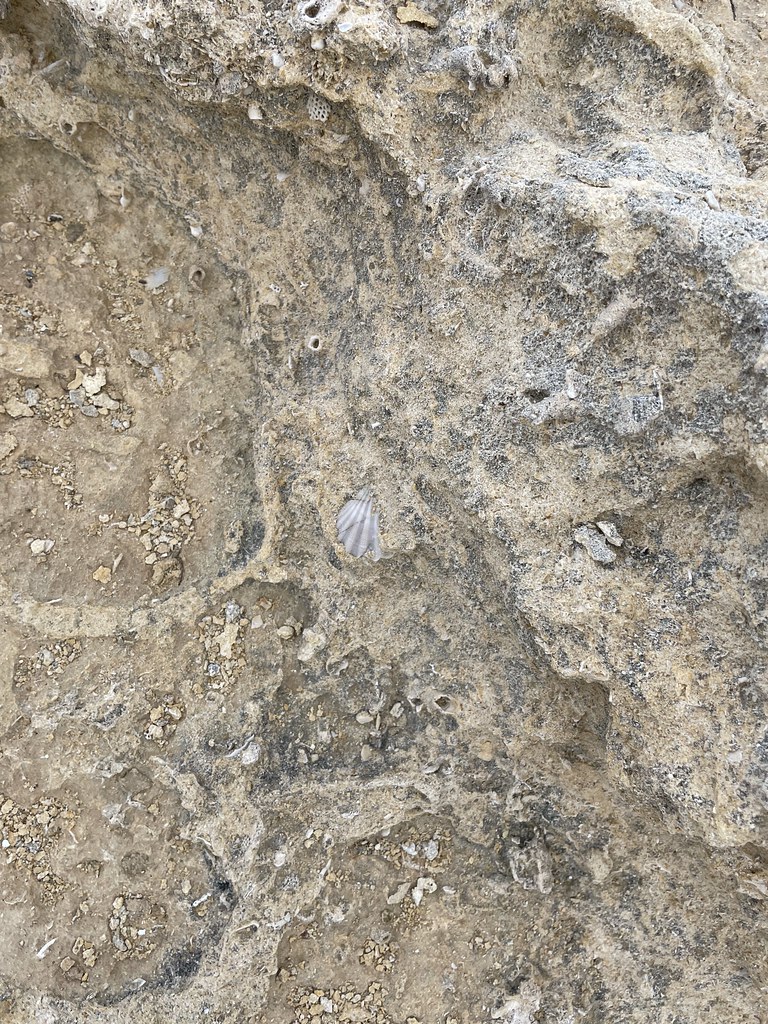 Besides the fossils we also stumbled upon some now out-of-use salt pans from when the area was partially submerged (but now sit on the top of sky-high cliffs!) We then got back to the car and drove to the currently used salt pans at Xwenji Bay. These pans are cut, filled with seawater, and harvested by hand. Some of them go back to the Roman ages! 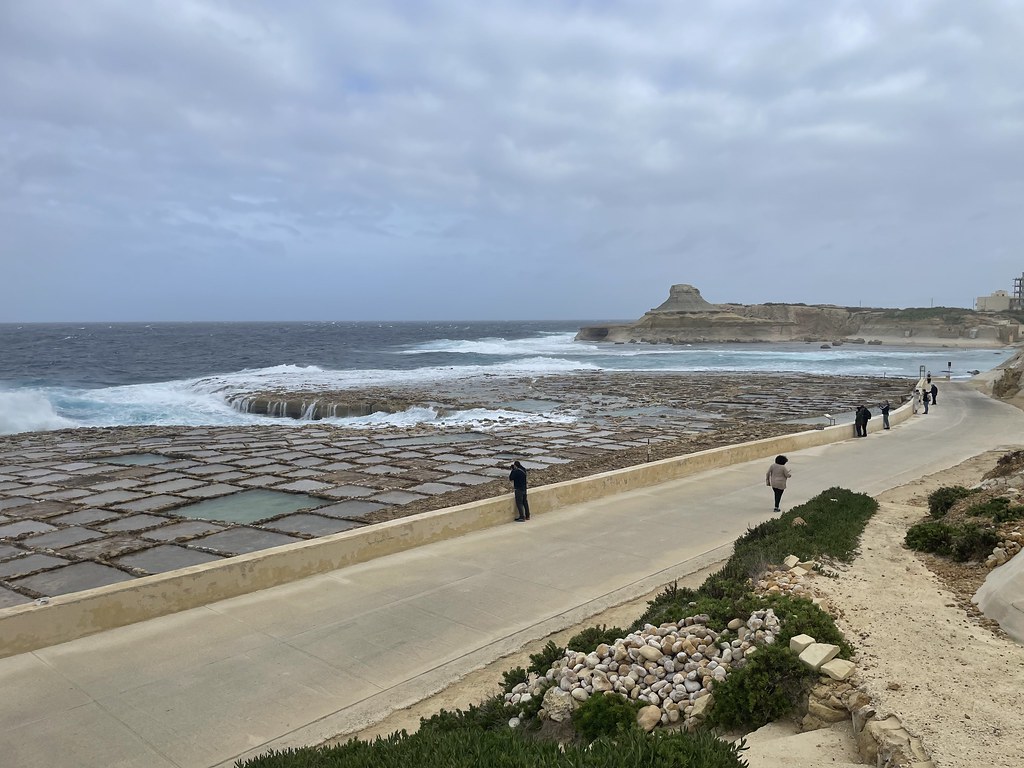 There was a basket with some examples of sizes you could buy and the directions to head up the hill a short way to the caves where the salt is stored and sold. We met Rose who told us her and her husband had been harvesting salt here for over 45 years! 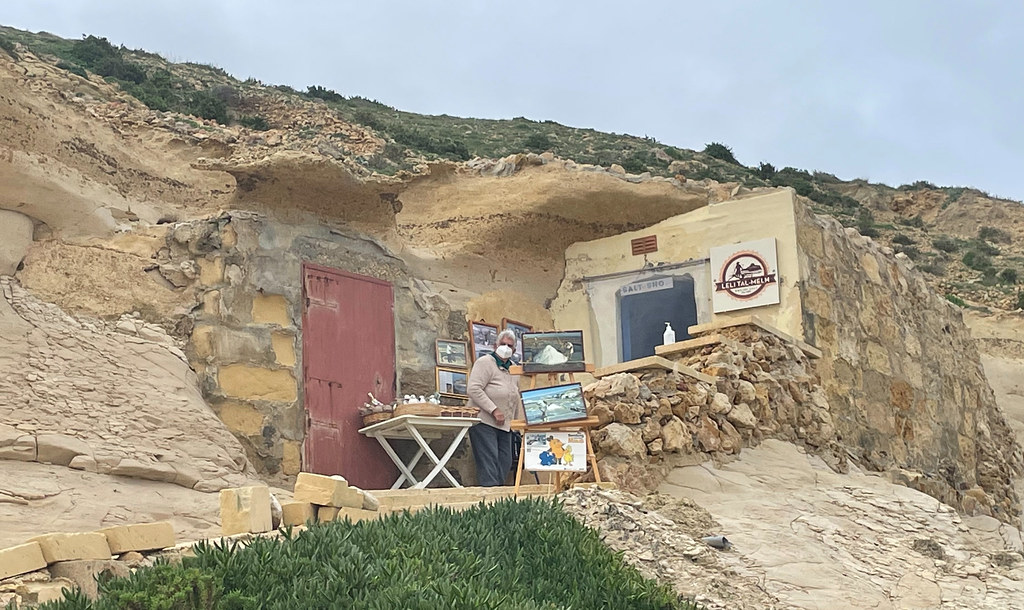 She's got a little collection of historical photos as well as different varieties of salt for sale. We were more than happy to buy from her directly!
Throughout the day the wind was soooo strong and the waves were huge! As we drove along the coast to Marsalforn the sea had actually risen up over the road at one spot. Forest had to time the surge and drive through when it was least deep. A bit nerve wracking to possibly be swept out! 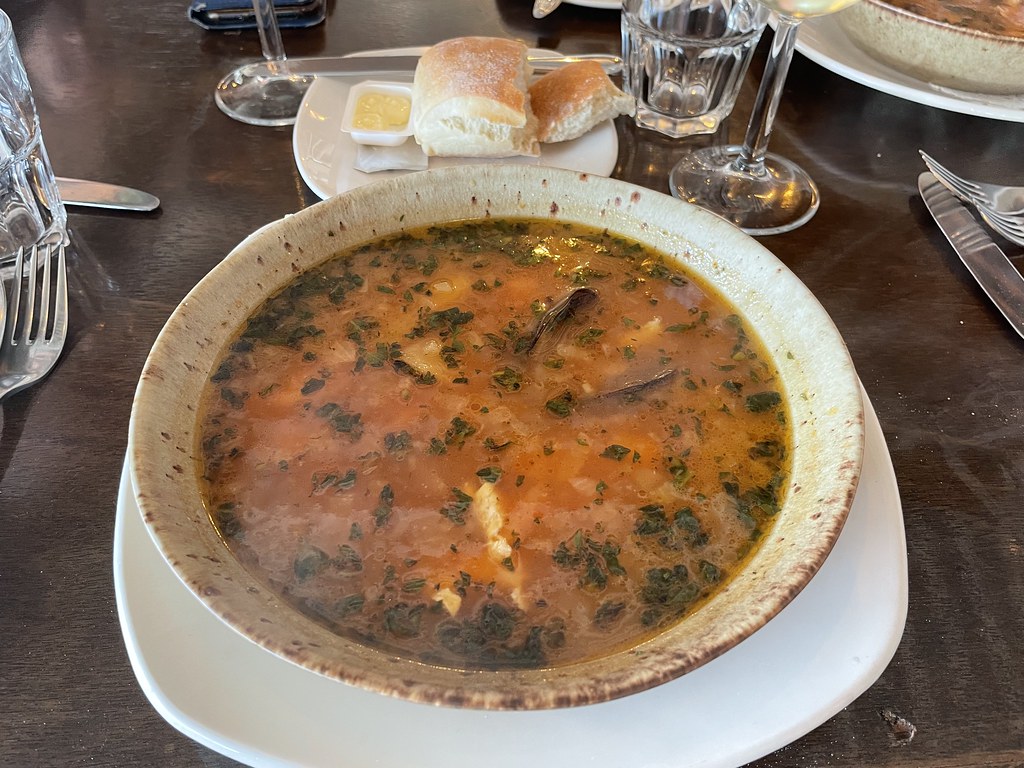 We had made lunch reservations at Qbajjar Restaurant. This restaurant has awesome views of the (raging) ocean and a menu filled with seafood and other local dishes. I had the best fish soup of my life here! I think everyone really enjoyed their food, I'd recommend it if you are in the area.
We tried to visit Xerri's Grotto in Xaghra after lunch but found it closed. So onward we went to the Ġgantija Temples.
Upon entering the historic site, you wind your way through the museum which provides information on the Neolithic Period. There are also displays of really interesting artefacts excavated from various prehistoric sites in Gozo. 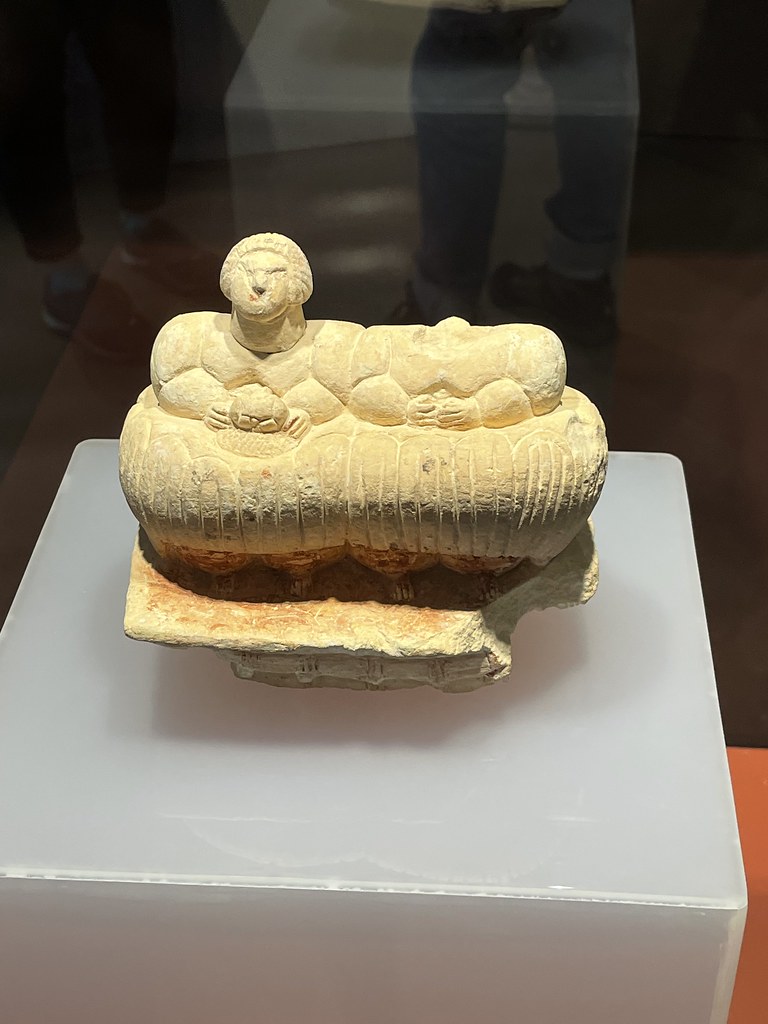 After trying to get your head around artifacts that survived from around 2300 BC (!!!) you wander outside for your first glimpse of the temple.

Ġgantija is a megalithic temple (meaning built with large stones) and are older than the pyramids of Egypt!!! There's really no apt description of the feeling you get as you walk in and around the structure. I'll just say it is AWESOME!!!
Even with how old this temple is, they still don't know the exact use. But there are doorways, and halls, individual rooms, tiny stones, giant stones, and even ancient graffiti that is visible.
We walked down the street afterwards to one of the last surviving windmills on the island. The Ta’ Kola Windmill was built in 1725 during the Knight's Period. The museum within shows tools used for harvesting and milling grain, as well as how the mill keeper and their family lived inside. It's interesting if you have time after the temple but I wouldn't go out of my way to get there. 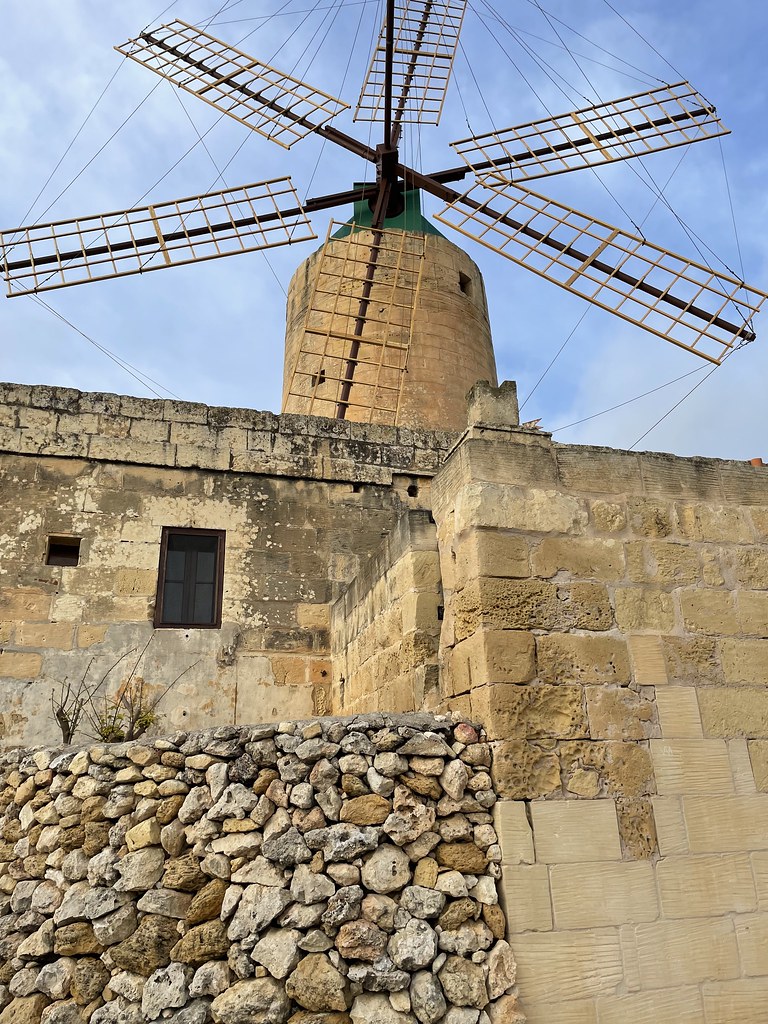 We finished our amazing day at Dwejra Bay with the most amazing sunset I think I've ever seen! 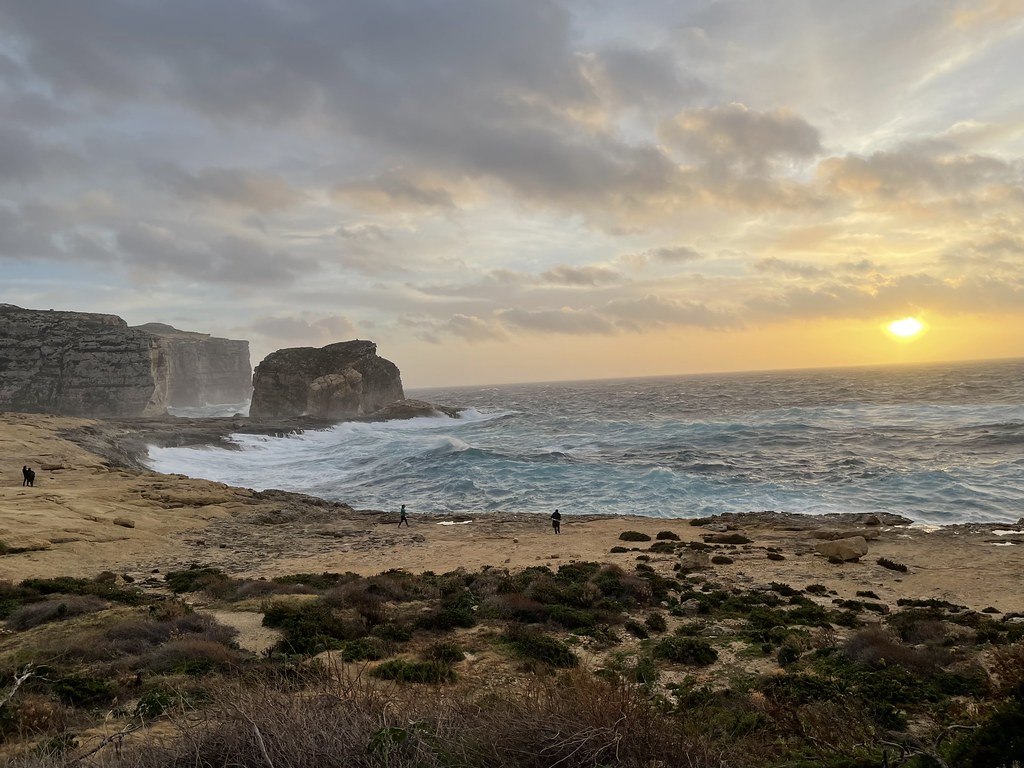 With the winds still gusting, the waves were absolutely spectacular! None of us could stop taking photos! If you are on Gozo, a sunset out here is a do-not-miss.
After some drinks in front of a little fire in our farmhouse (the owner had stopped by with some wood as it was chilly), we caught the bus which stopped right in front of our house, and had a quick ride to Victoria. We were having dinner that night at Maldonado but not in the normal restaurant area. We were booked for a special Maltese and Gozitan wine pairing dinner in the upstairs private space. I'd say there were about 15 diners for this. 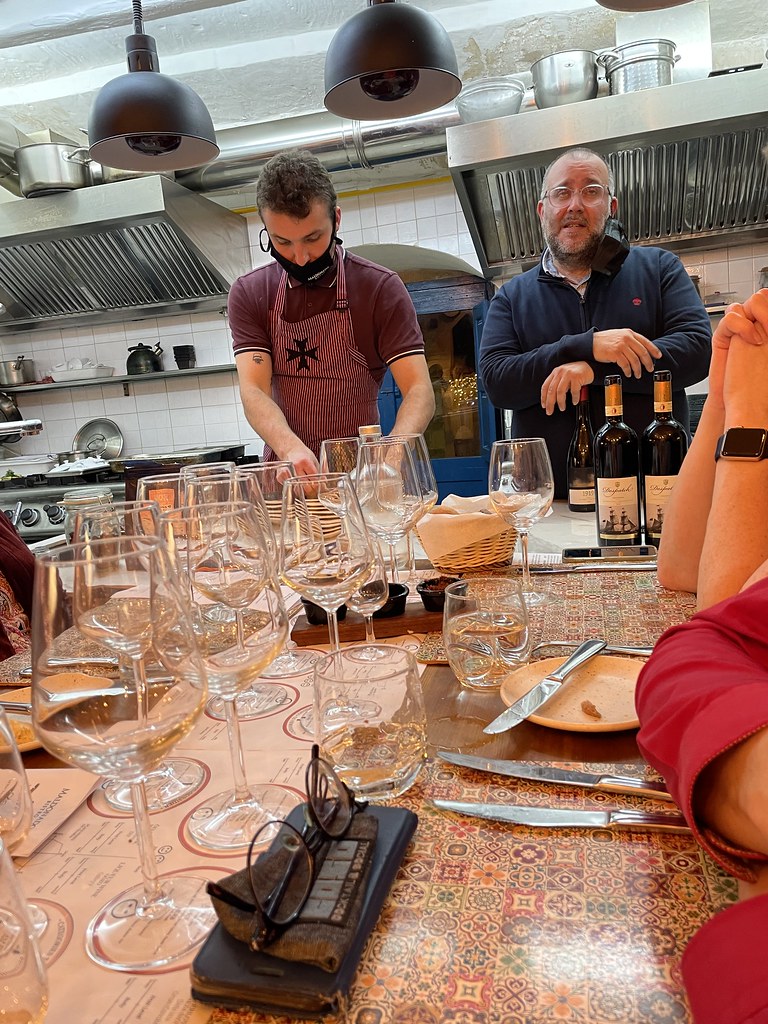 The owner talked us through each of the wines while his chef prepared courses as we watched. It was great to learn more about the wines from the area and also watch the chef in action using local ingredients like in this mini tart with sheep's milk cheese, pea hummus, and zucchini. 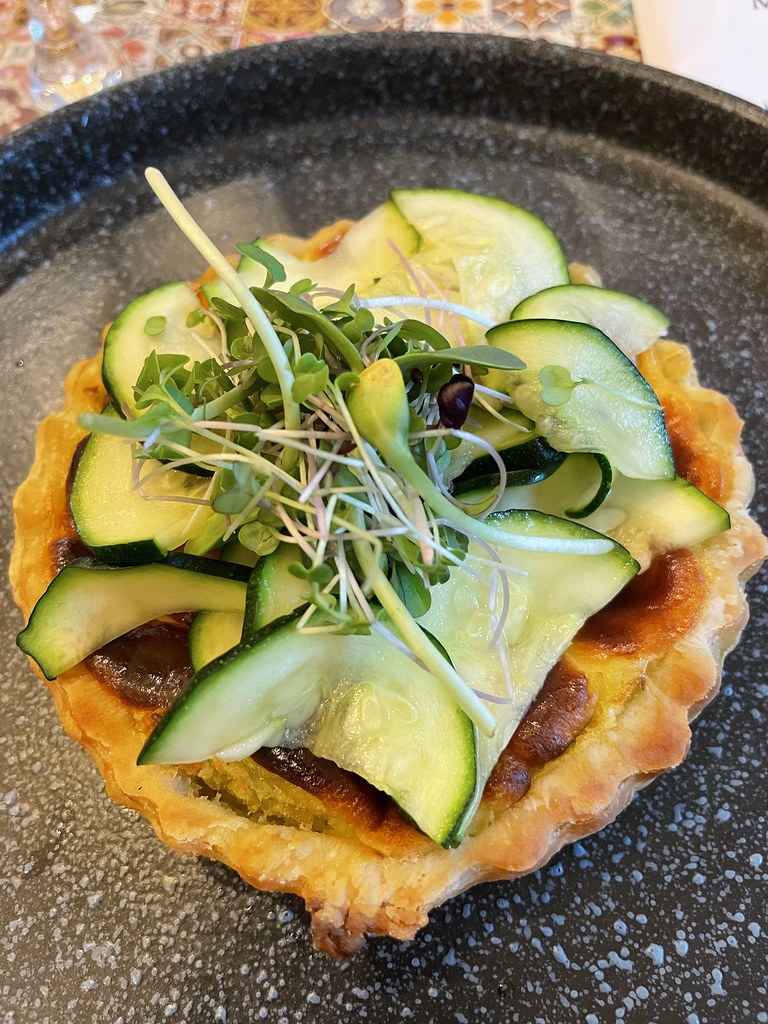 We just loved Gozo! If you are planning a trip to Malta it is really worth it to take a couple of days to explore this island as it is completely different then the main island country.
All Gozo photos here.
Other posts from this trip:
Country Count #51 Malta
New Years Eve in Malta
All Around Valletta