After 3 days on Gozo, the five of us were headed to Malta itself. We packed up, checked out of our cute farmhouse and drove to the car ferry. It was a spectacularly sunny day so we all sat up on deck and enjoyed the weather and the views.

We drove about an hour, the length of the island, to the town of Marsaxlokk, surprisingly the only fishing village in Malta. This town happens to also be where one of my friend's mother is from and her brother had given us a great lunch recommendation right on the harbor. 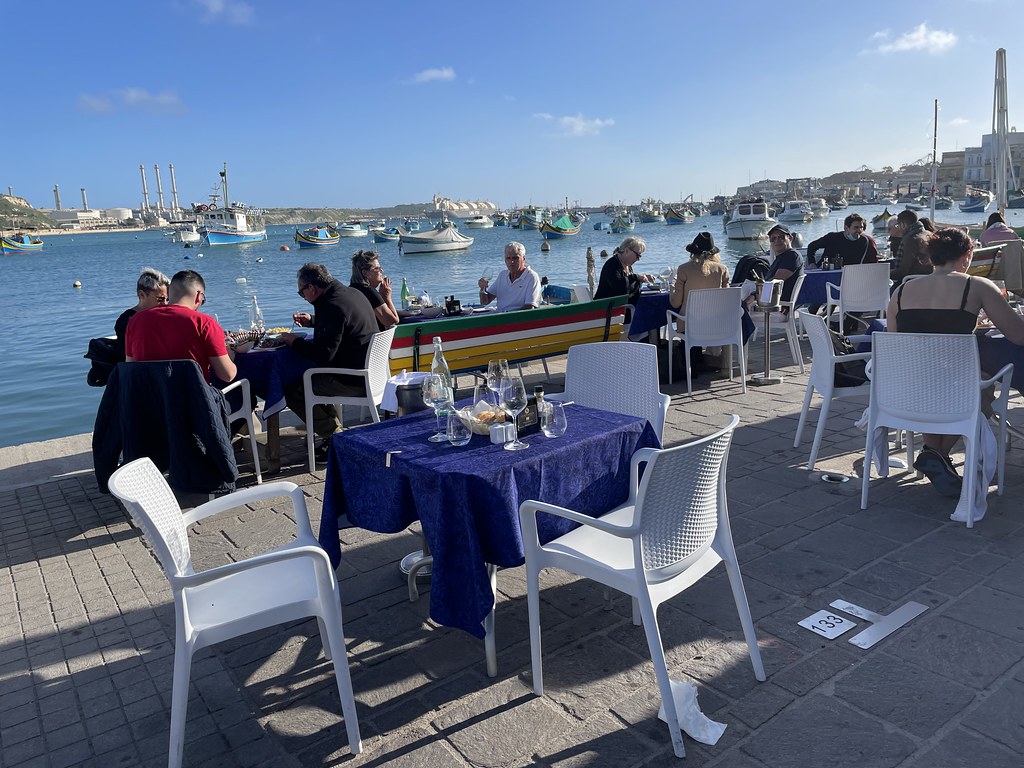 All the dishes we had, as well as the local wine, at La Nostra Padrona were fabulous. We shared some delicious fried calamari and then I had a wonderful pasta with clams. You can't get fresher seafood than right here!

We didn't have a lot of time to wander around Marsaxlokk but Forest and I did go for a quick walk along the harbor and to see my friend's family house. The town is very charming! 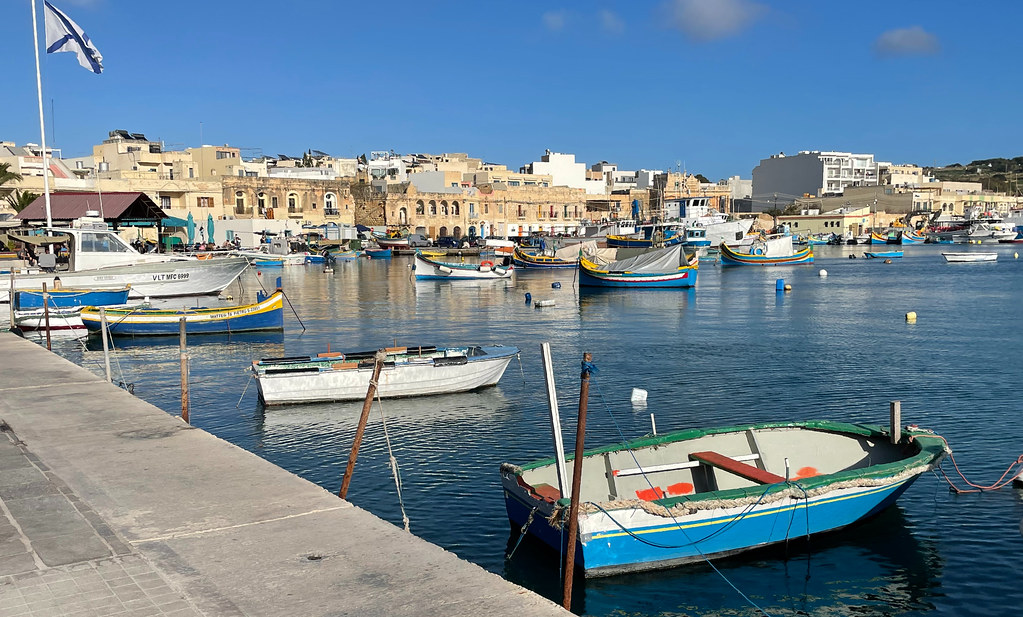 From here it was a 10-minute drive to our next stop, the Ħal Saflieni Hypogeum. Luckily we had been advised to book tickets to this right after we booked our flights as they only admit 10 people on each tour and there are only 6 tours a day.

The neolithic burial temple is in the town of Paola, in a neighborhood lined with apartments with traditional Maltese balconies called gallarija. The site was accidentally discovered in 1902 during the building of a new house, the workers ended up breaking through the roof of the hypogeum. That is some basement discovery! 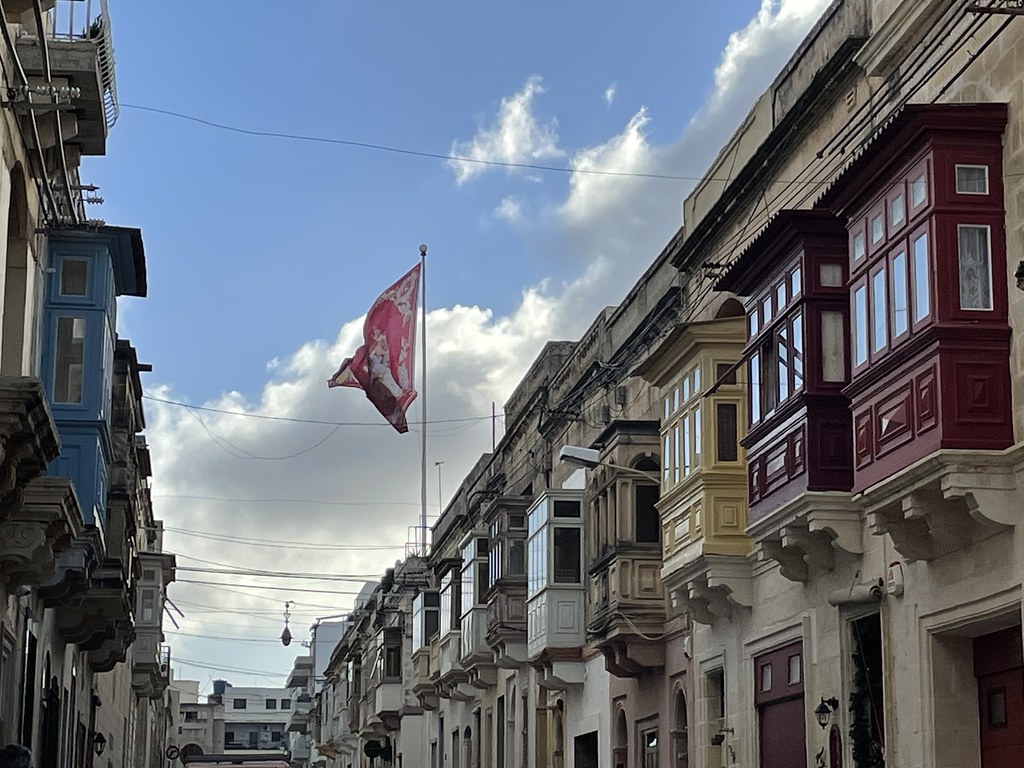 It's a completely fascinating monument that was used between 4000 BC and 1500 BC. There were believed to be around 7,000 people buried in the multi-leveled chambers. There is no photography allowed on the tour but there are photos on the site that I linked.
It was time for us to head to the Grand Harbour in Birgu, an area just south of the capital of Valletta and one of the oldest cities in Malta. We were excited to check into our new place; the 65' yacht Sea Baron IV! 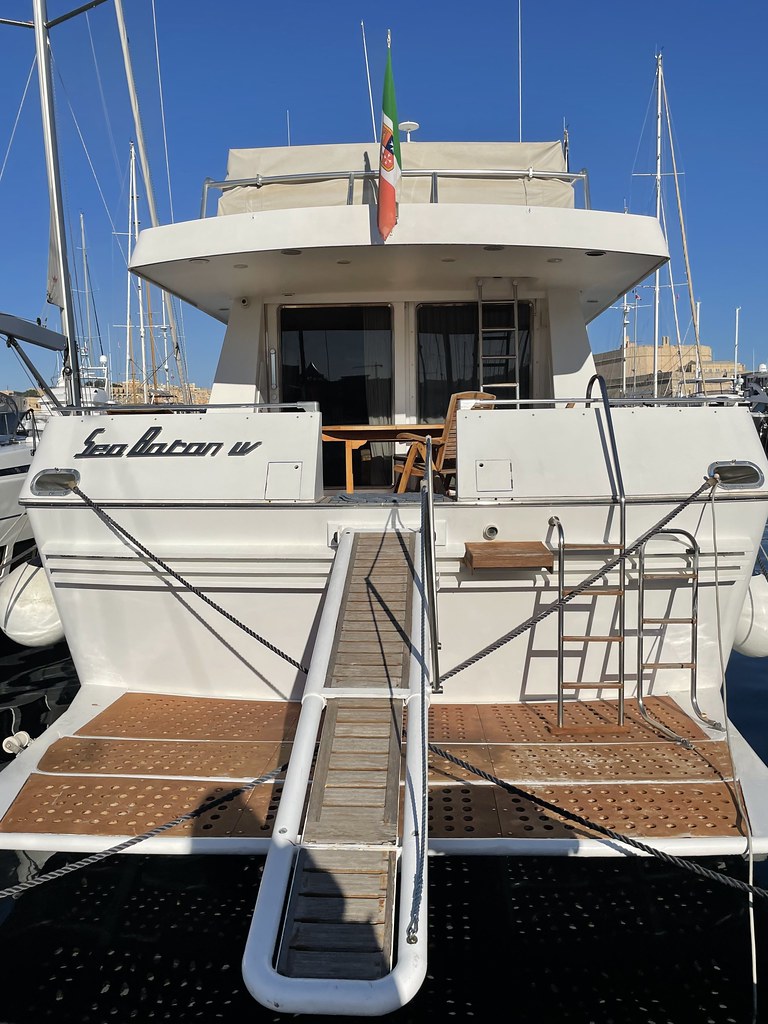 We wouldn't be chartering the yacht, just living on it for 5 days. It was a gorgeous boat with tons of space. Three bedrooms, each with their own bathroom, a large living room/dining room, smaller coffee nooks, outside area with table/chairs, and a bunny pad up front. And the Grand Harbour has some exceptional people/boat watching! (The current season of Below Deck is filmed in this marina!)
We were pretty smitten with our location so decided stay in and have pizzas on board for dinner and played games afterwards.
The next morning was New Year's Eve and we had a lot planned! We were picked up (we had returned the car to the airport so that we wouldn't have to deal with parking) and driven 20 minutes to Attard to have a private cooking class with cookbook author and food writer Pippa Mattei. Anne had found out about her classes which are held in her home; her lovely husband John and her daughter Emma both were involved also. 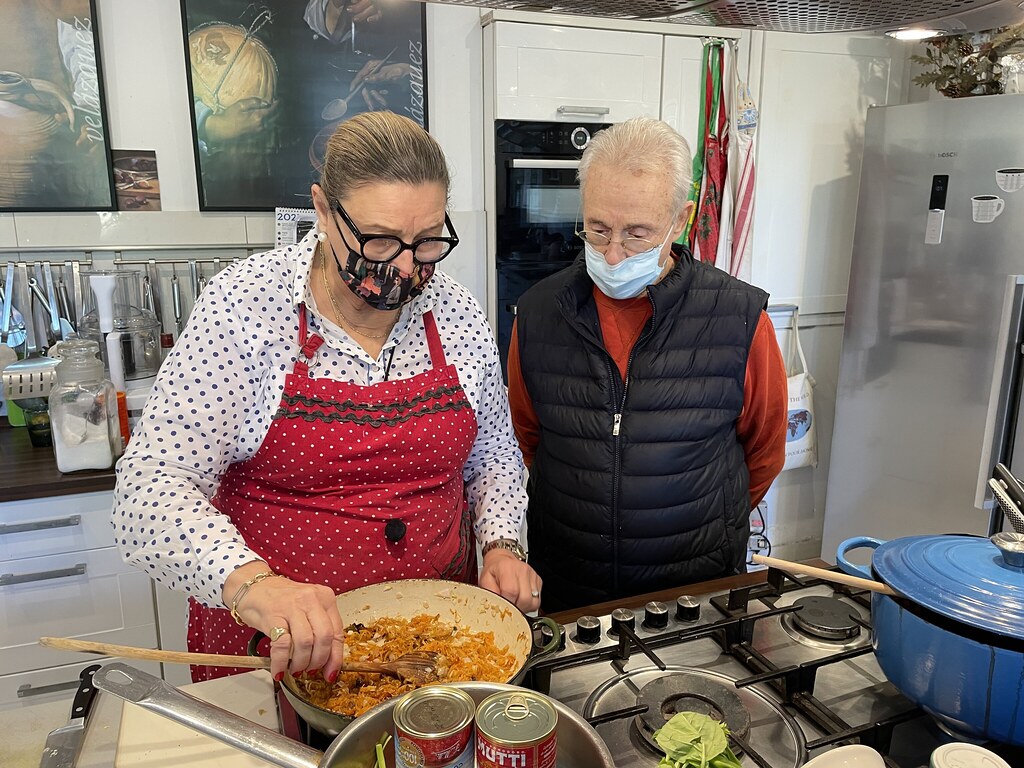 We had such a great time, I would highly recommend Pippa's class if you are with people who like to cook. The class was as hands-on as each person wanted it to be, so we all got very involved! We learned to make ravioli with two different fillings and a chestnut soup dessert. 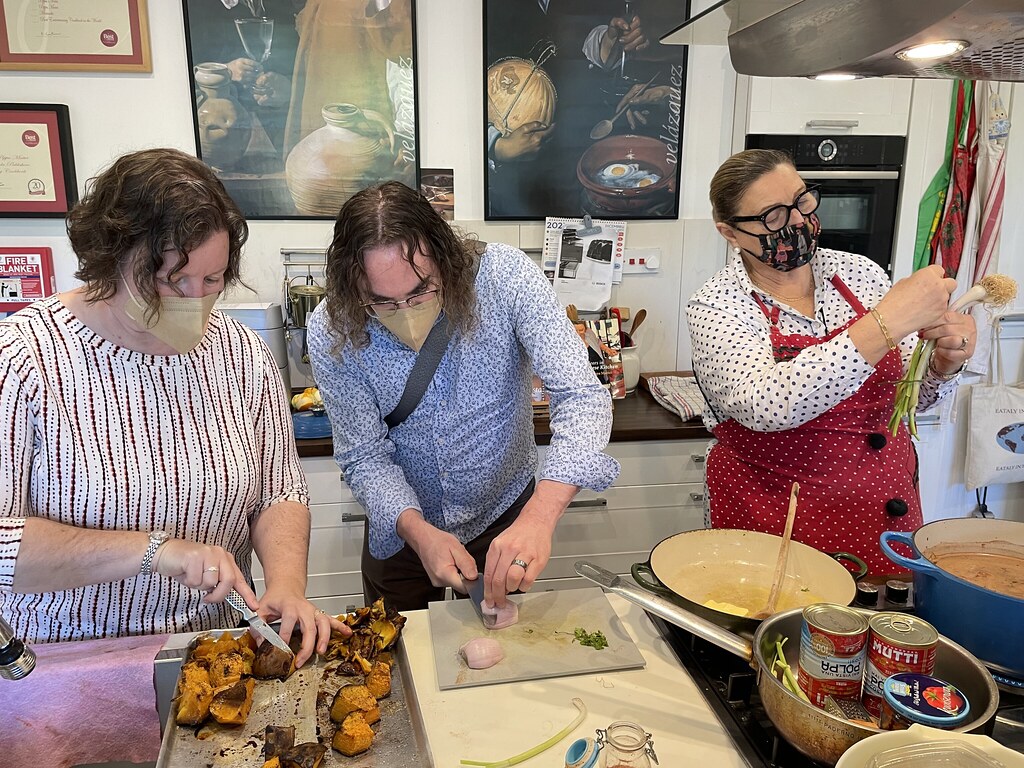 And possibly the best part was that after we made everything, we helped to set a table in Pippa and John's gorgeous backyard garden and got to eat everything and have some local wine! 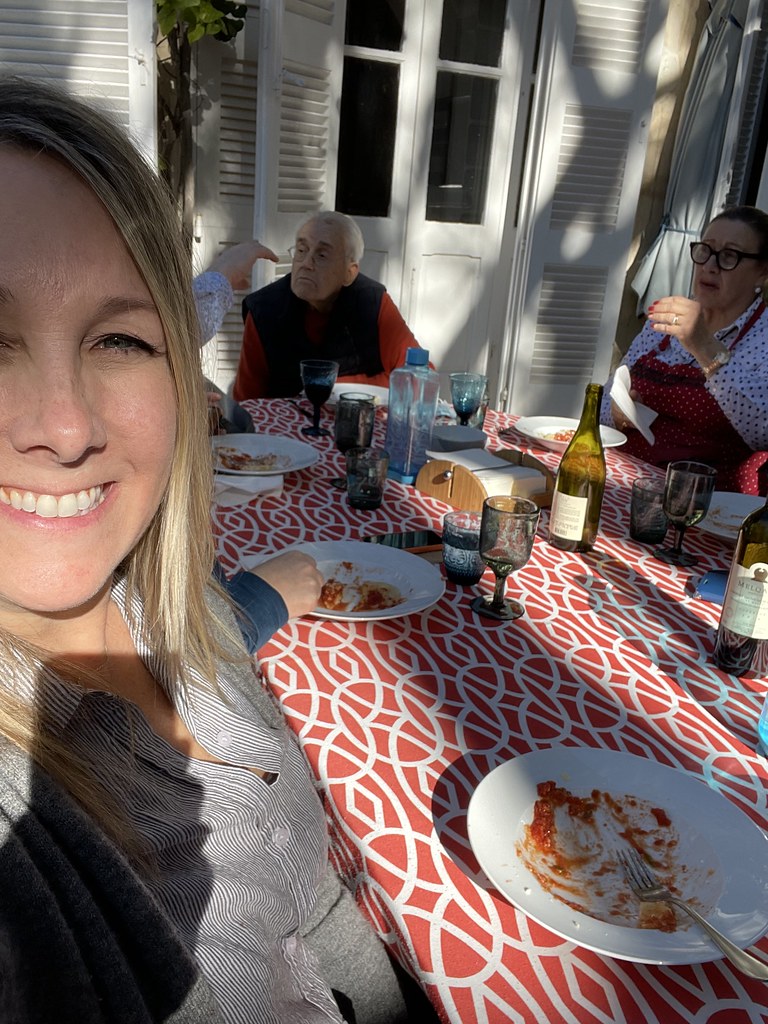 During dessert we also learned that the Maltese put a drop of orange flower water in their coffee. It was delicious!
Their driver then picked us up and dropped us off at the walled town of Mdina. 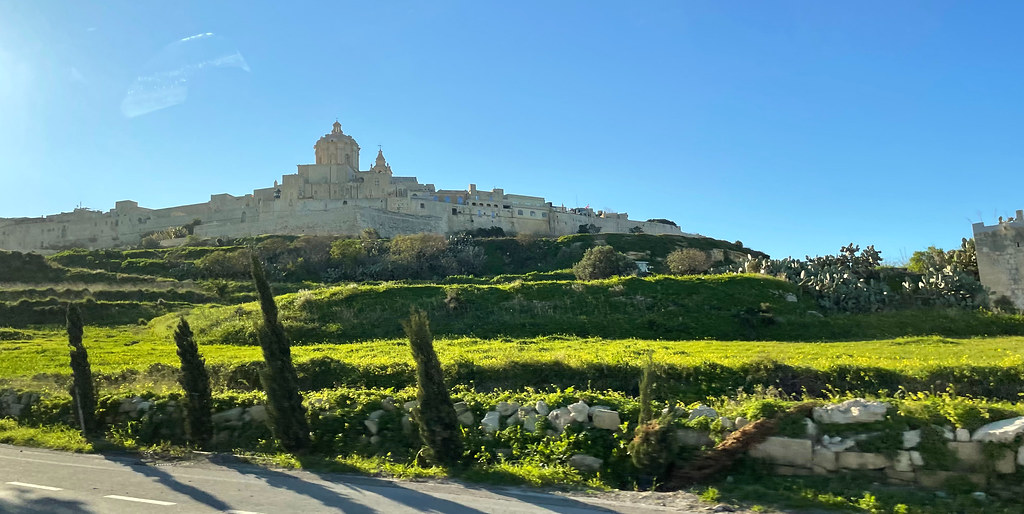 Mdina was the capital of Malta until the medieval ages. When they moved the capital most everyone left so the town was then called the Silent City. And Mdina was the filming location for a few scenes in Game of Thrones. It was high on my list of places to visit so I was excited to be there. 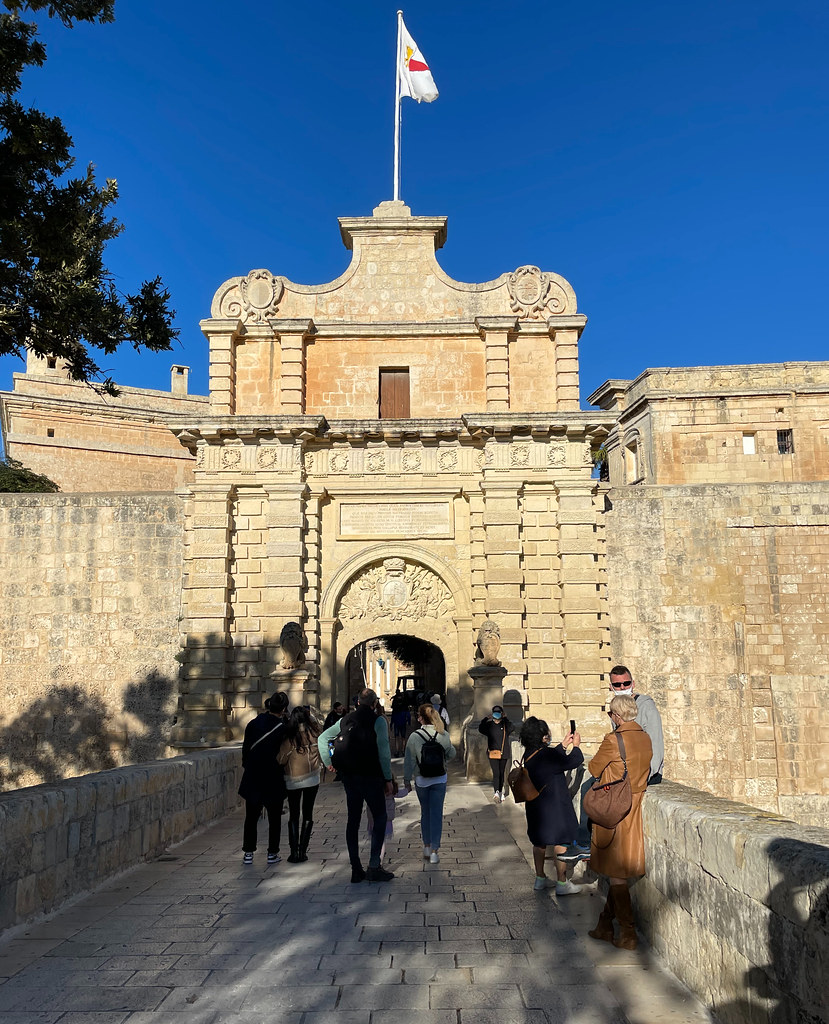 It's very small and doesn't take very long to walk around and the architecture is absolutely beautiful! Many of the residents were Maltese nobility and most of their property was passed down from families and from generations (and still continues). There are also wonderful views from the town out to the sea! 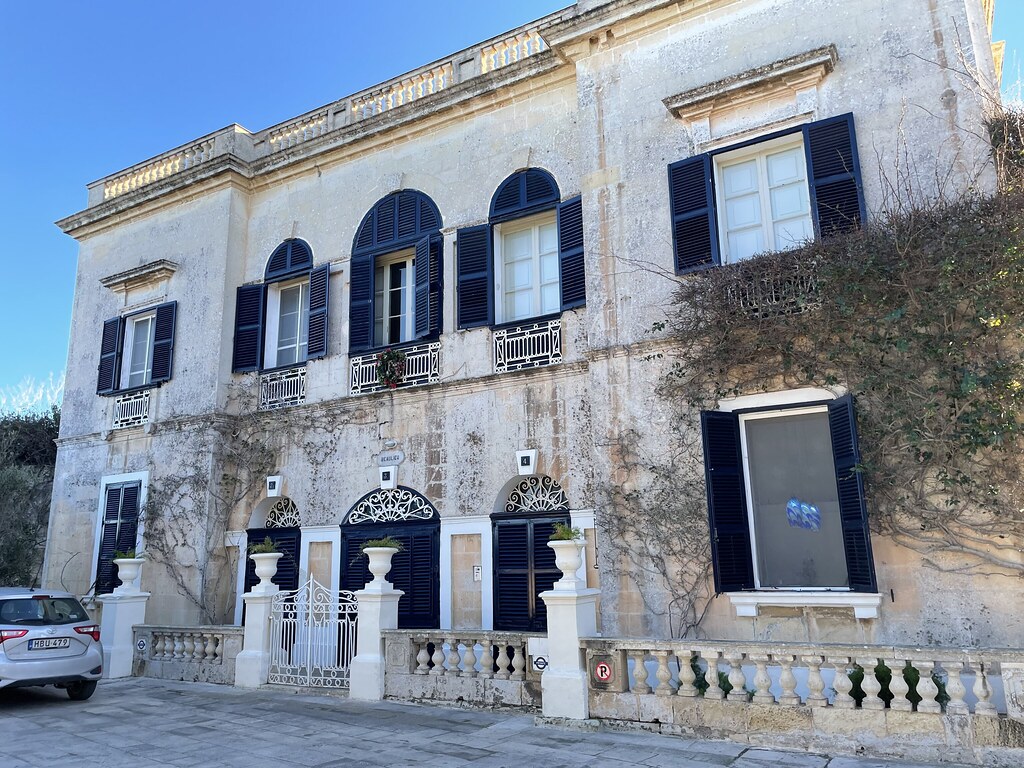 This would be a very easy stop on the way to or from the Gozo ferry as well!
We grabbed taxis and headed back to the marina. Anne, Forest and I stopped at a grocery and loaded up on happy hour supplies for our New Year's Eve festivities. We had sunset drinks on the yacht, the weather was just gorgeous, and then got cleaned up for our dinner plans. 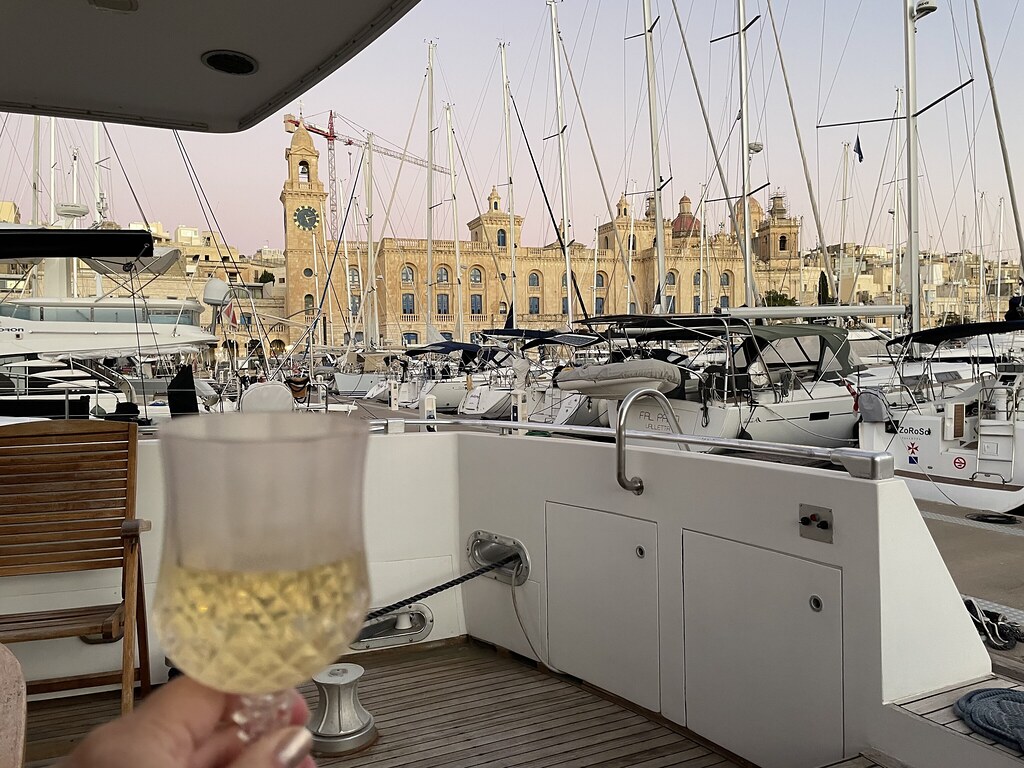 We had chosen the restaurant Terrone which is right in the marina so we wouldn't have to deal with traffic and could just walk over. Since Covid was still quite prevalent we also made reservations for outside. It was chilly but I just had a light weight jacket on and was fine. 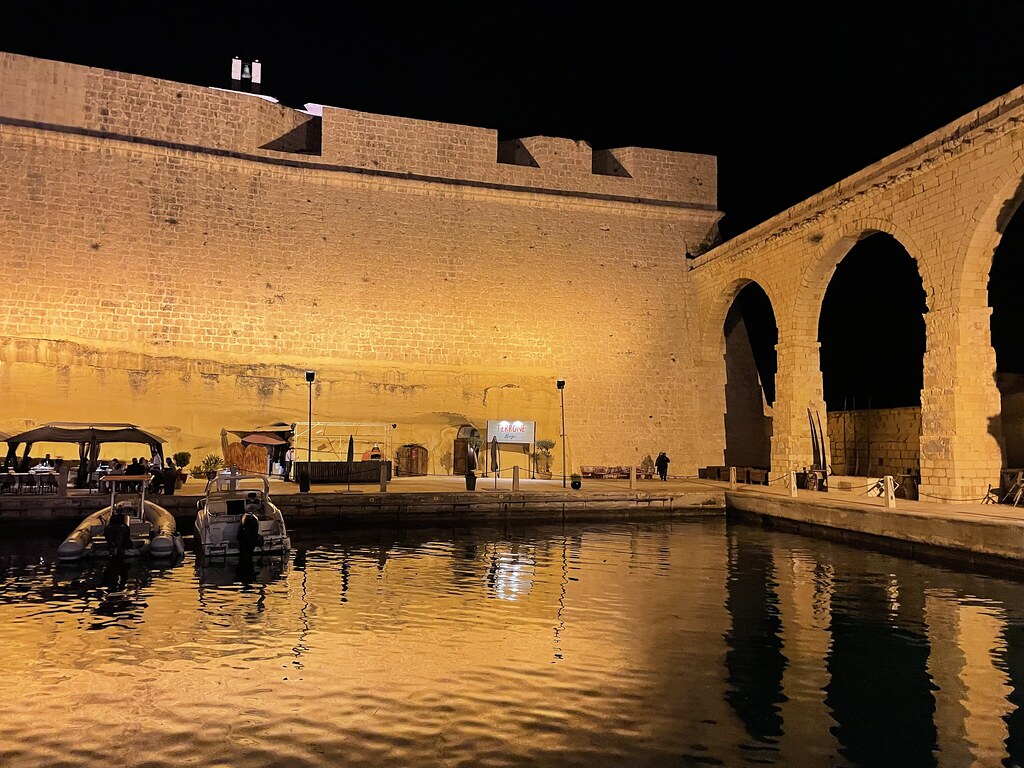 The setting (the restaurant is built into the walls of the Fort St. Angelo) and the food were both very nice, but unfortunately they were so short staffed that our service was really poor. It was almost impossible to get our order taken, refills on items, etc. which can be trying.
We headed back to our boat in time to pour another round of champagne and watch the fireworks. We had been worried that they might cancel the show but it went on as planned and we had a great time! 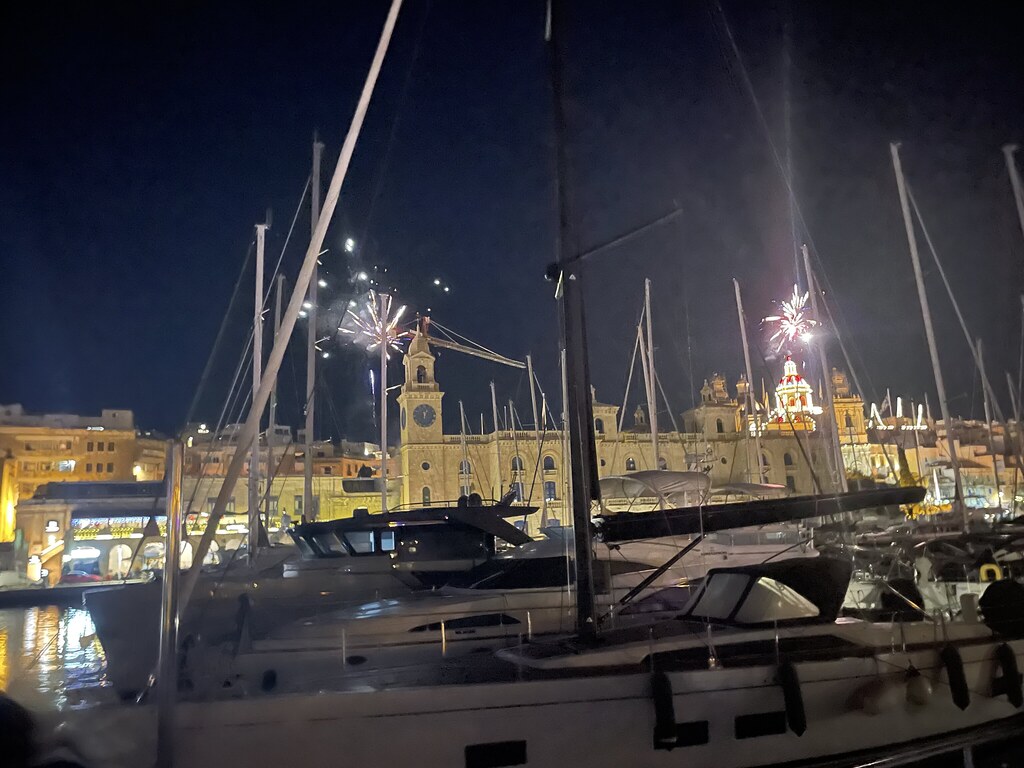 We had filled the last day of 2021 with a lot of fun and wonderful experiences!
All Malta photos here.
Other posts from this trip:
Country Count #51 Malta
All Around Gozo
All Around Valletta