After a year of not being able to meet up for our annual New Years Eve trip because of Covid, Forest, Thibault, and I were landing at our chosen destination of Malta! Malta was one of the only countries that we found to be requiring proof of vaccination which made us all breathe a bit easier. They also were still wearing masks, inside and outside, so it felt safe. The country is rich in history, prehistoric relics, amazing scenery, delicious cuisine, and is on the Euro. This little island country really has it all! 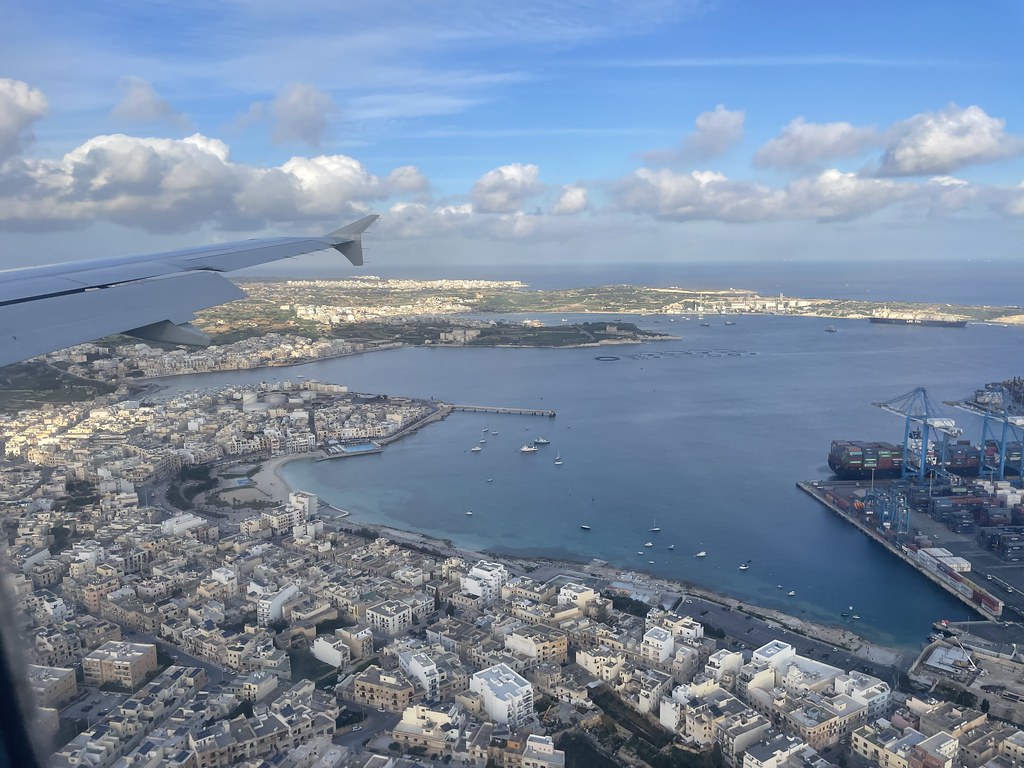 My friends and I flew from Lyon where we had spent Christmas with Thibault's lovely family. His mom even packed us sandwiches made with leftovers and his dad drove us to the airport. Very sweet! After 2 hours on Malta Air we were landing in the capital city of Valletta and my 51st county!

We picked up our rental car at the airport and were really surprised when they told us there was a €2k deposit! Driving is on the left in Malta and the roads are quite narrow and twisty, we also had a manual shift, so it was really nice that Forest offered to be the driver. As we drove through Valletta we passed a horse and buggy on the road; the experience had already begun!

Gozo is an island just north of the "mainland" of Malta and would be our first destination. It was a 40+ minute drive to the ferry dock, then about a 30 minute crossing. It was dark so we couldn't really see much but as soon as we drove onto Gozo we could see how charming the tiny towns were and all lit up with Christmas decorations! 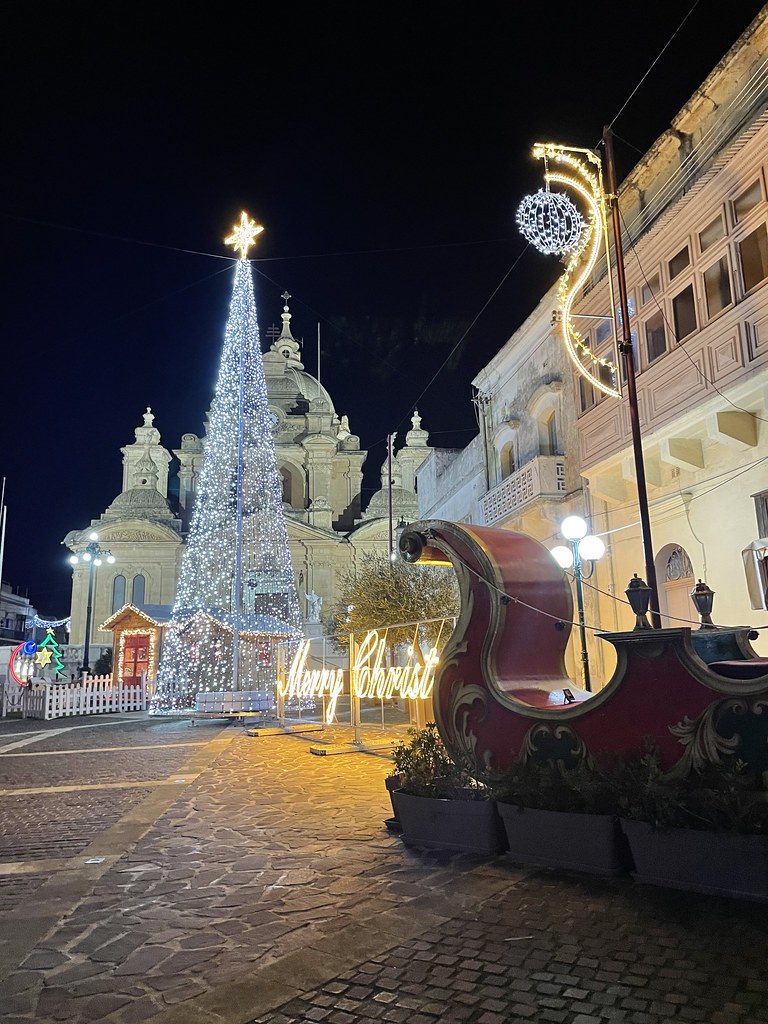 It took us a while to find a restaurant still serving dinner as we were arriving later than planned but luckily we stumbled on Al Sale in Xaghra. Here we had our first taste of the Maltese sheep's milk cheese Ġbejna and I had a lovely pasta. As Malta sits in the Mediterranean between Tunisia and Sicily the food has wonderful flavors borrowed from both regions. My ragu had sweet earthy spices of cinnamon, clove, and cumin and the pasta was expertly made. We were full and happy and excited to see our rental in the neighboring village.
The village of Ghammar is actually more like two intersecting roads. Our VRBO was a wonderful 3 bedroom farmhouse. Stone walls, tile floors, vaulted ceilings, a fireplace and a pool! I mean it was too cold to swim in December but still! My friends Anne and Brian would be arriving the next day and traveling along with us, hence the 3 rooms. 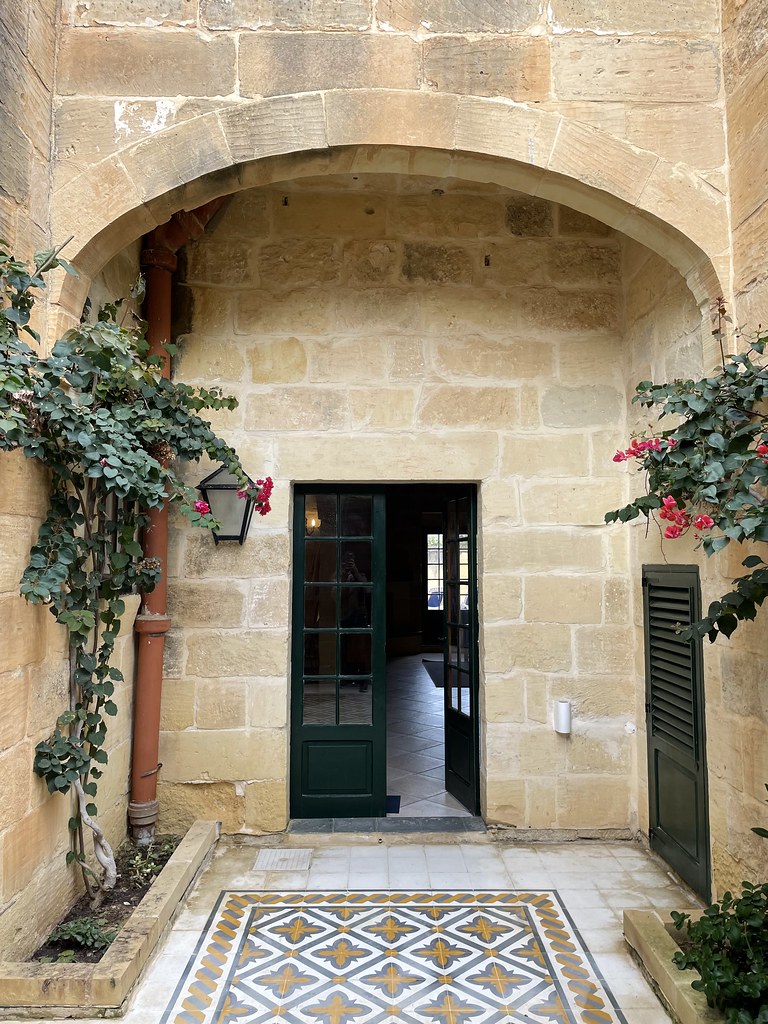 Thibault, Forest and I set out on a morning hike the next day from the farmhouse up to the lighthouse. It was great to be able to see what was around us since it had been dark when we arrived. Very pretty countryside. 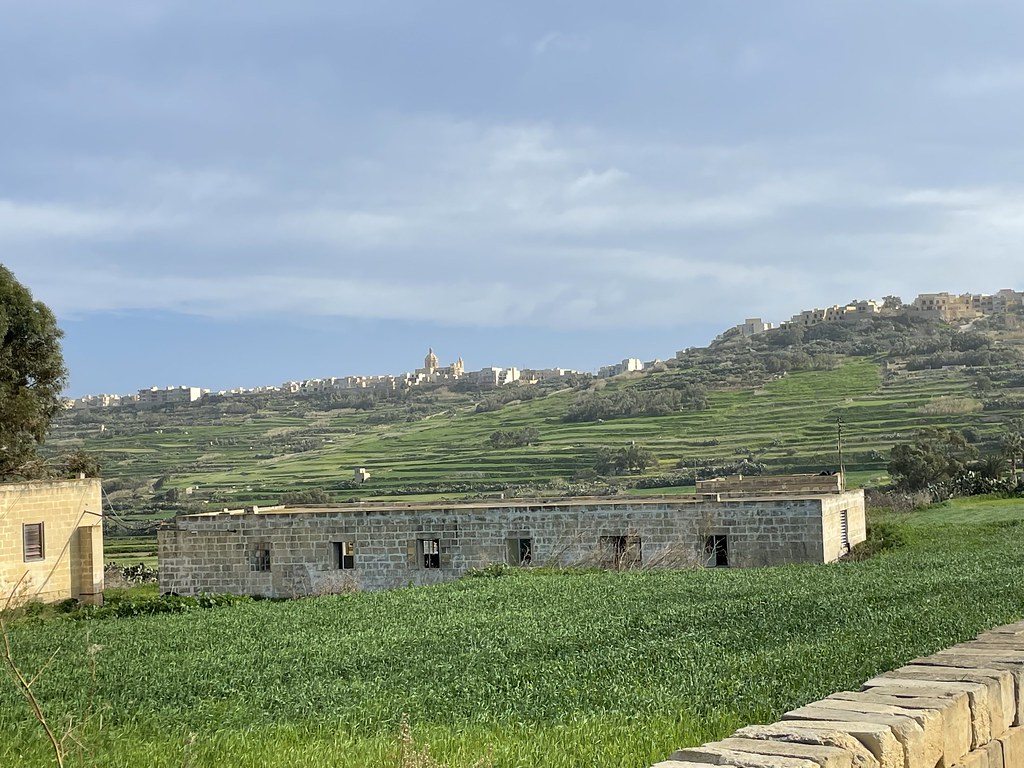 At the top it was incredibly windy! Like, oh-my-gosh-I-might-blow-over windy! And the views were breathtaking! Villages, terraced farms, ocean... this was our first real look at Gozo and we were smitten! 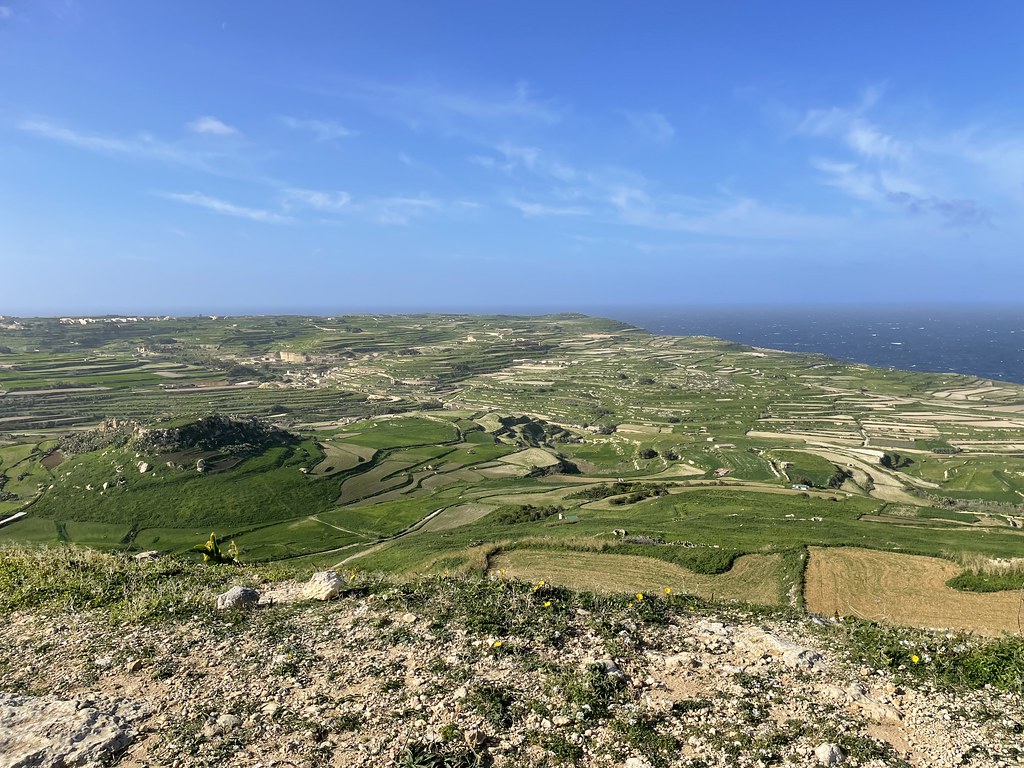 There were some old military barracks and an old canon up there too. It was a great little hike for exploring and taking advantage of the clear skies. We headed back to the farmhouse and grabbed the car to go into Rabat for lunch.
Victoria, also called Rabat, is the capital of Gozo. Its Citadel sits atop a hill, visible from most parts of the island. We decided to have lunch at Cafe Jubilee which had tables outside in the square and a menu of traditional cuisine. Forest and I had a hit-list of foods to try in Malta so this figured in well with our plan; I ordered the Stuffat tal-Fenek, braised rabbit which is the country's national dish. 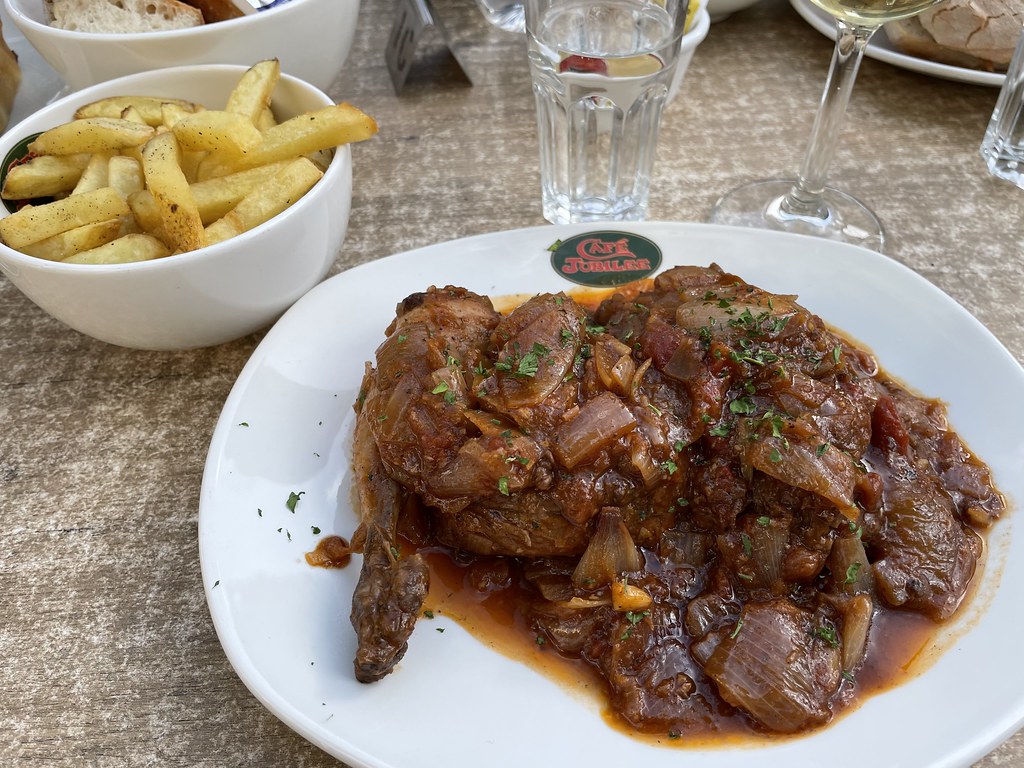 Lunch was great, but sooooo slow! We figured after lunch we would do a little sightseeing on the drive to the ferry to pick up Brian and Anne but we ended up being late by the time we finished lunch! Gozo runs on a very laid back schedule, note to self!
Once we had our friends we set off to do a little walk around Daħlet Qorrot Beach which is on the east coast and not far from the ferry. Besides the small beach there are a series of caves which the local fisherman use for boat houses. Across the inlet we could see Sopu Tower which dates from 1667 and was the last watchtower built on the island. 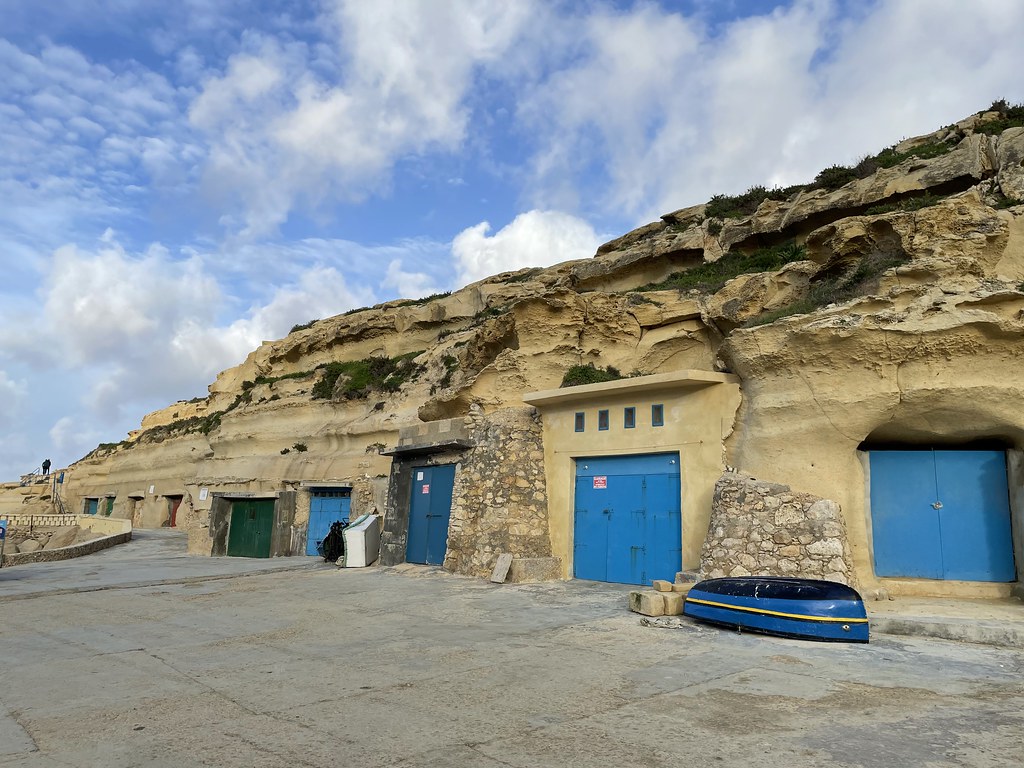 We walked for a bit around the coastline, the variety of limestone walls are really interesting!
From here we drove to Ramla Beach where we read there was a bar and thought we would have a drink. Ramla has a wide, long stretch of red sand beach, and in the summer I can imagine it is packed with locals and tourists. But on this winter day we found the bar to be a closed up seasonal shack. 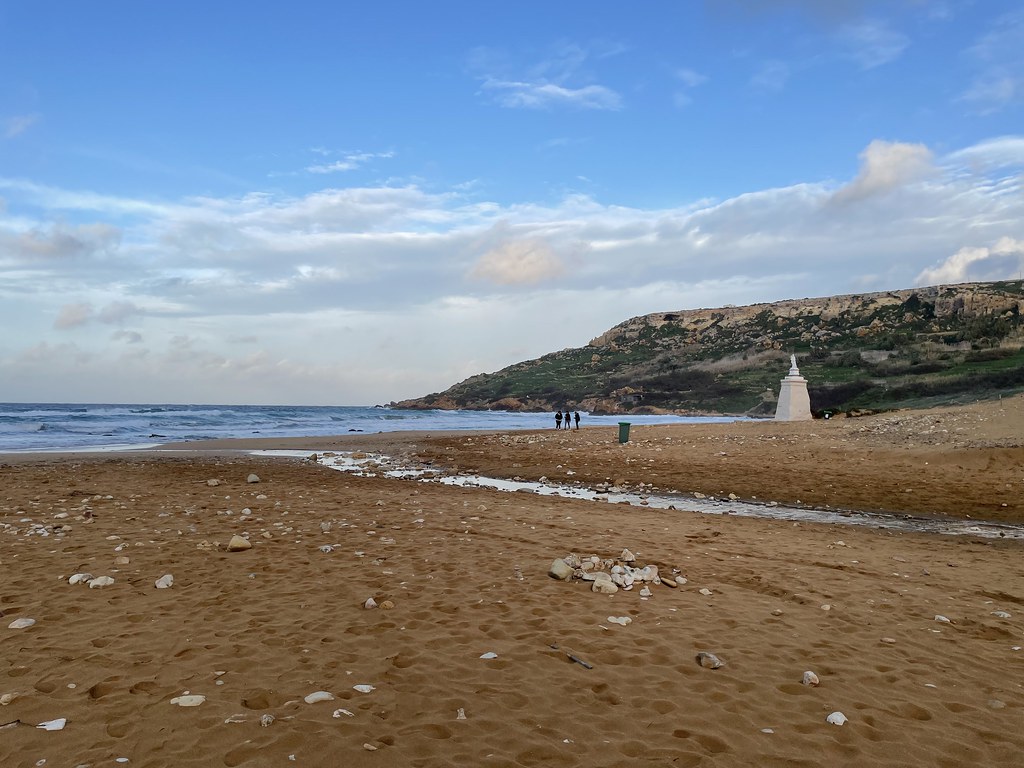 After a nice stroll along the sand we decided to go back to Victoria and visit the Citadel at dusk. This original walled city of the island has had fortifications built on it since the Bronze Age! Until the 17th century all Gozians were required to be inside the walls at night for protection from raids. 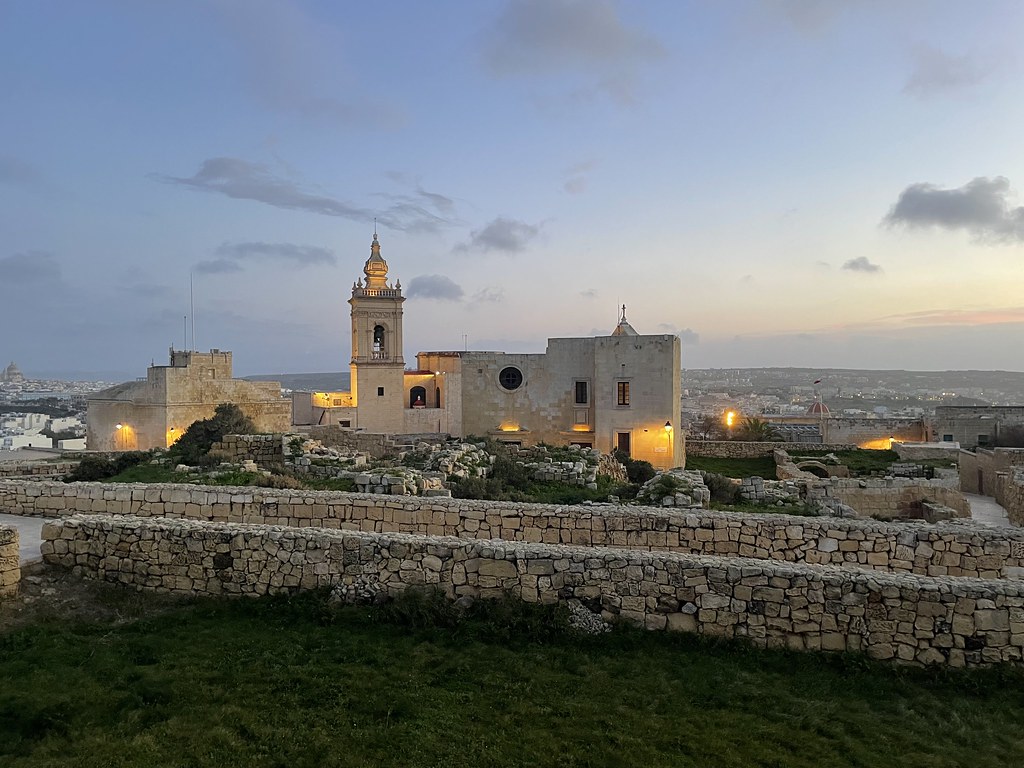 You can walk almost all the way around the ramparts, taking in stunning views of Gozo from all angles. The winding cobblestone walkways inside the fortification take you past shrines, historic houses, and finally lead to the chapel in the center square. 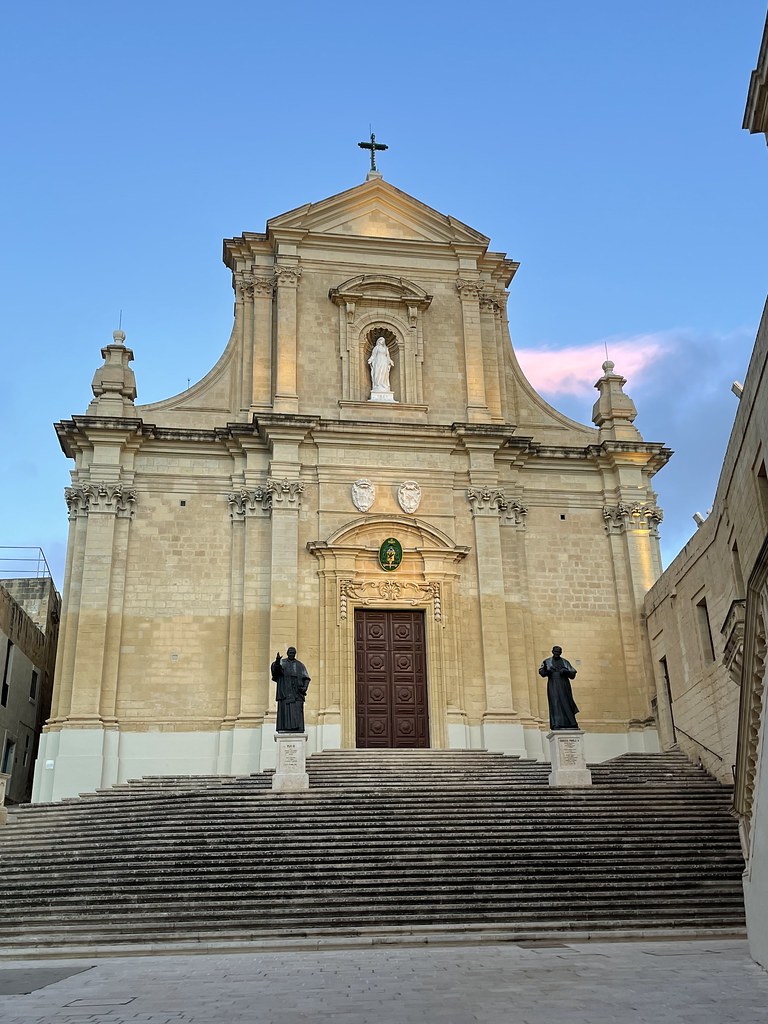 We were practically the only people there and it was awesome! Highly suggest an end-of-the-day visit for the lack of crowds and gorgeous light. We stopped into Victoria Central bar/coffee shop after and I had a lovely spritz using Maltese sparkling wine, local prickly pear liqueur, and soda water.
One of the specialties of Malta is pastizzi, hand held pastries traditionally filled with either ricotta or curried peas. We had walked by Sphinx pastizzi a few times that day and their selection looked really good so we decided to grab some and have them for a casual dinner back at the farmhouse. Brian and Anne hadn't been yet, we had been out all day since picking them up, and we were all ready to relax. And let's be clear, Forest and I were more than ready for a martini!!
All Gozo photos here.
Other posts from this trip:
All Around Gozo
New Years Eve in Malta
All Around Valletta