After years of international travel, I felt like I had it down pretty well. I know what to pack, how to get a good deal on flights, how much time to allow for transfers, etc. Leave it to a pandemic to throw all of my knowledge out the window and make me feel like I am flying to Europe for the very first time.

With the world opening up to travel for the vaccinated, I booked a flight to Paris where I'd meet the BFF and then the two of us would head off from there. Since my last European flight was way back in January 2020, I splurged and booked a business class seat on British Air which had a quick stop over in London.

As soon as my ticket was booked I started to get a flood of emails and texts from the airlines informing me of all the documentation I had to provide in order to fly, to transfer in London, to land in France, to leave France, to arrive back in the US. It was exhausting and confusing. Pages and pages were printed, as the French love their documents, showing my vax status, atesting to negative Covid tests, etc. When I arrived at the airport in Seattle I thrust all the papers at the counter agent and she laughed. But she also had to go through them all and stamp them with approvals. Geesh! 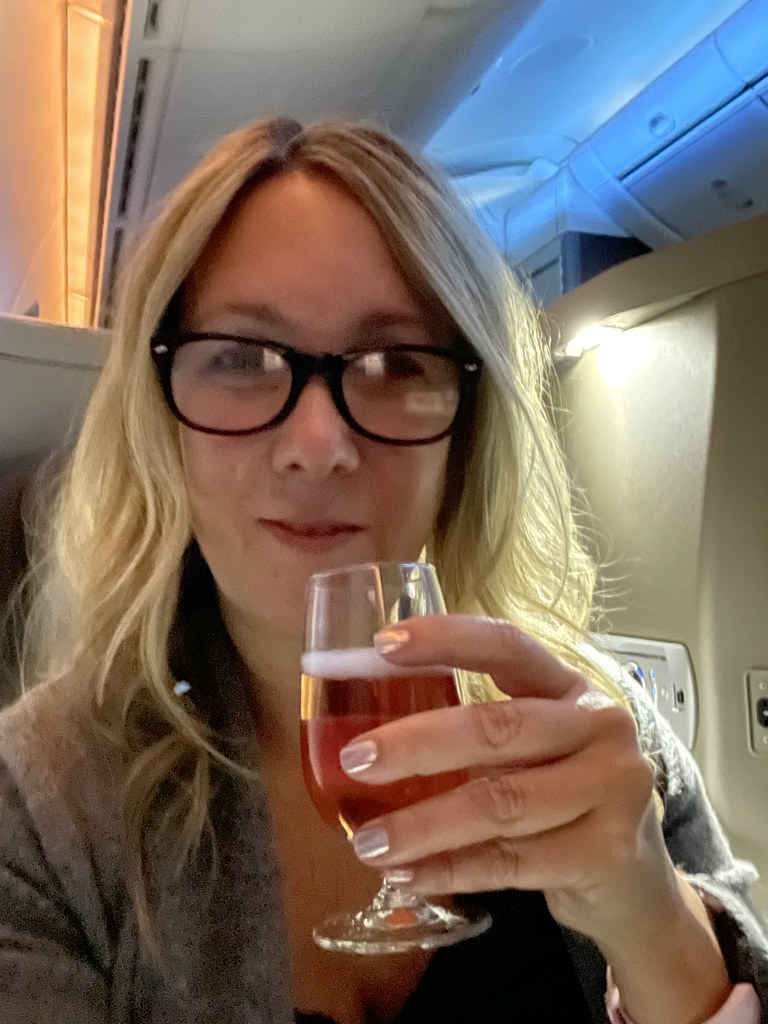 After a quick champagne and sandwich in the BA lounge I was the first to board and was very excited that my seat 7A was not only a layflat but it was practically its own pod. There was no one in the seat next to me and I was the last row so only a wall in front of me. I was excited for my trip but I was also feeling stressed about Covid so this was a great relief to be far from others!

In Heathrow I was shocked at how empty the airport was! I walked, instead of riding the train, to my next gate area and I was the only person there! 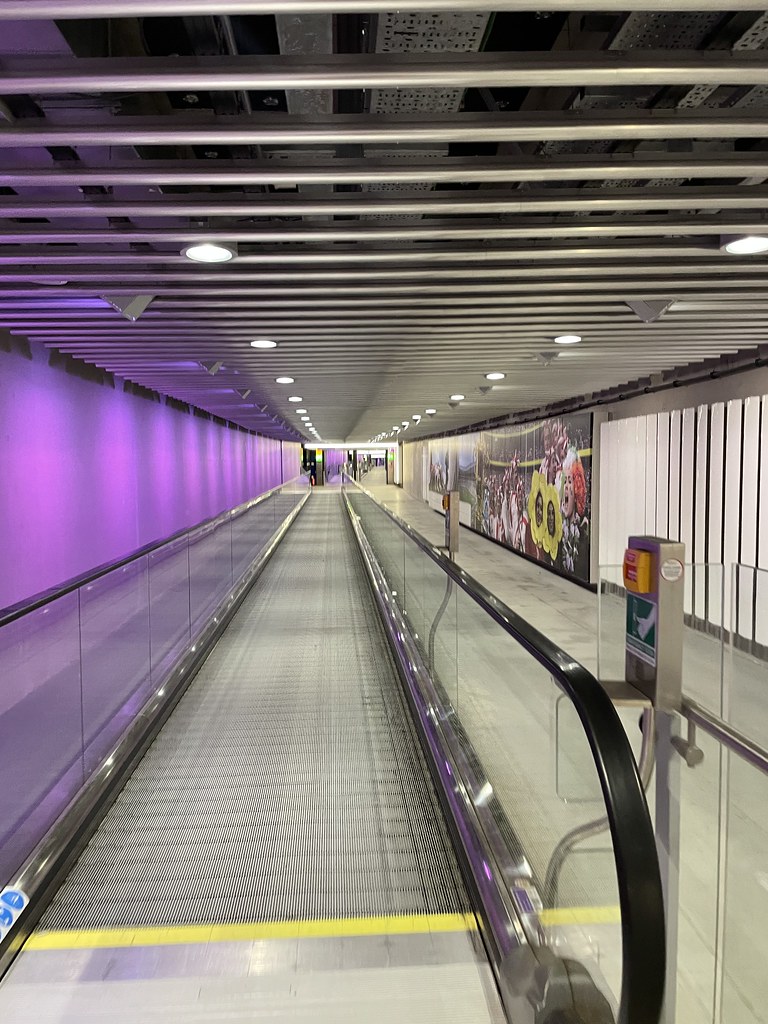 The BA lounge was quite nice and very large. I had lunch, with champagne of course, and then had a quick flight to Paris. I had the entire row to myself and they also had tea service which I enjoyed while flying over the shore of Normandy. Well done BA! 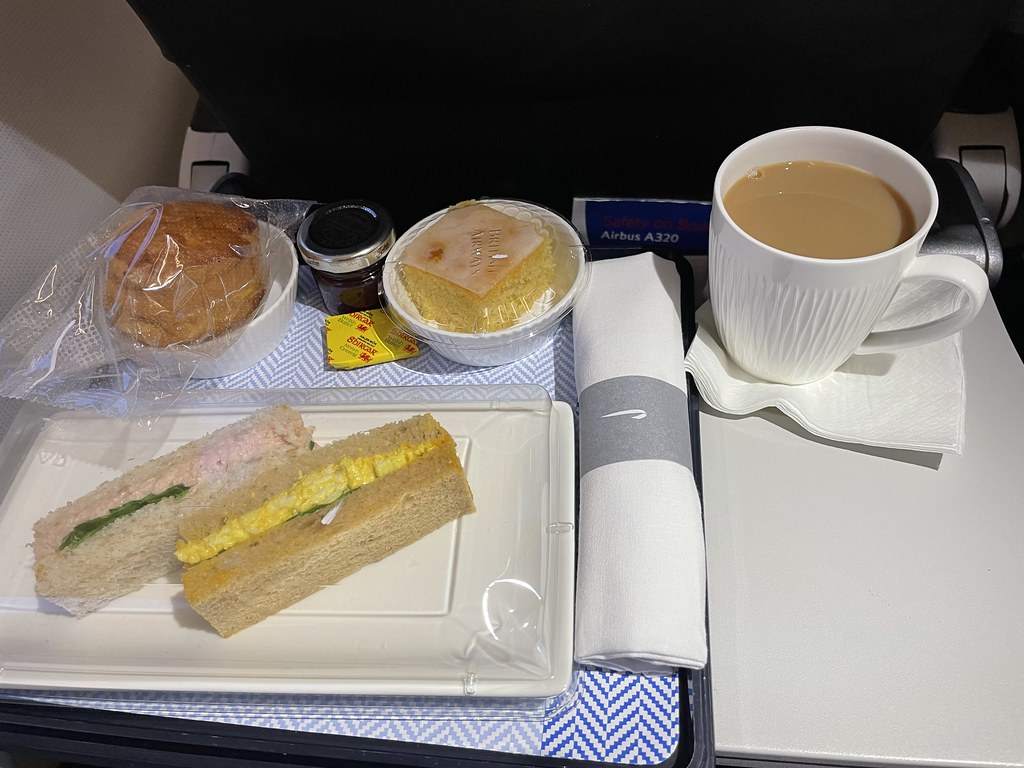 Upon arriving at Charles de Gaulle, I had to find the pharmacy in order to get my "pass sanitaire". This pass, certifying vax, is only available at certain pharmacies and if you don't have it you can't ride the trains, enter places, etc. By the time it would have taken me to get into the city the pharmacy by my friend's place would be closed, and it wouldn't open the next day before our train was to leave, so my only shot was to find and get to this one at the airport before it closed. STRESS! 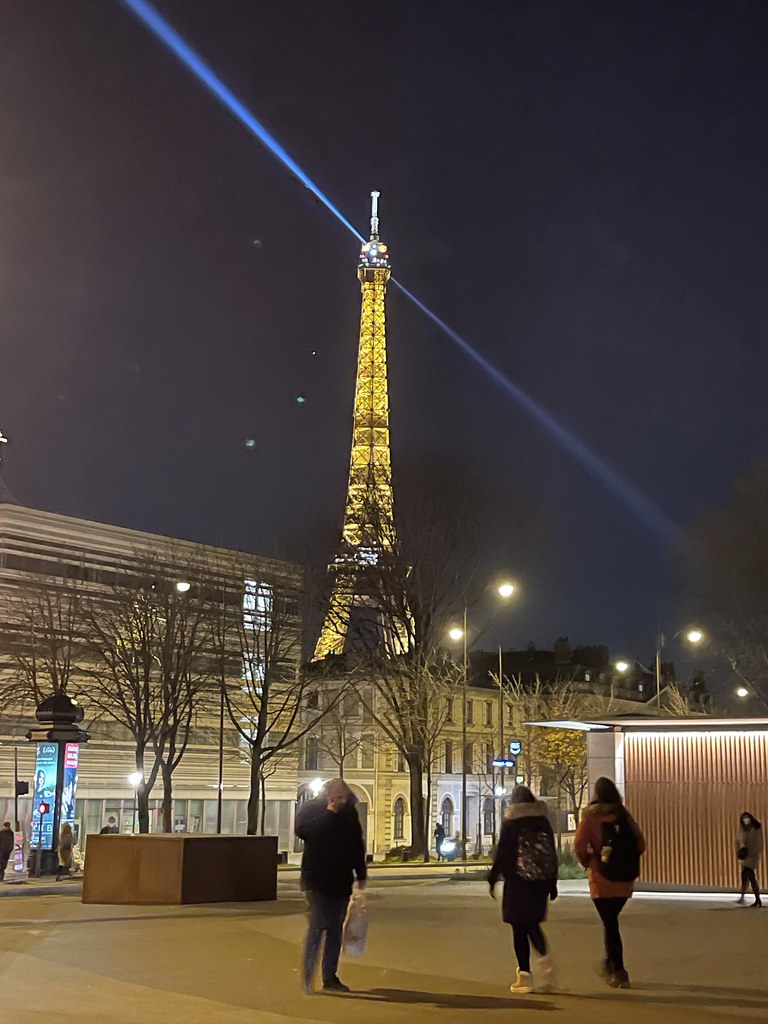 But I made it, and I got it. I only had one quick night in Paris but it was spent at a corner bistro with Forest and Nicky, eating steak tartare and frites, and drinking too much. Pretty much perfect :) 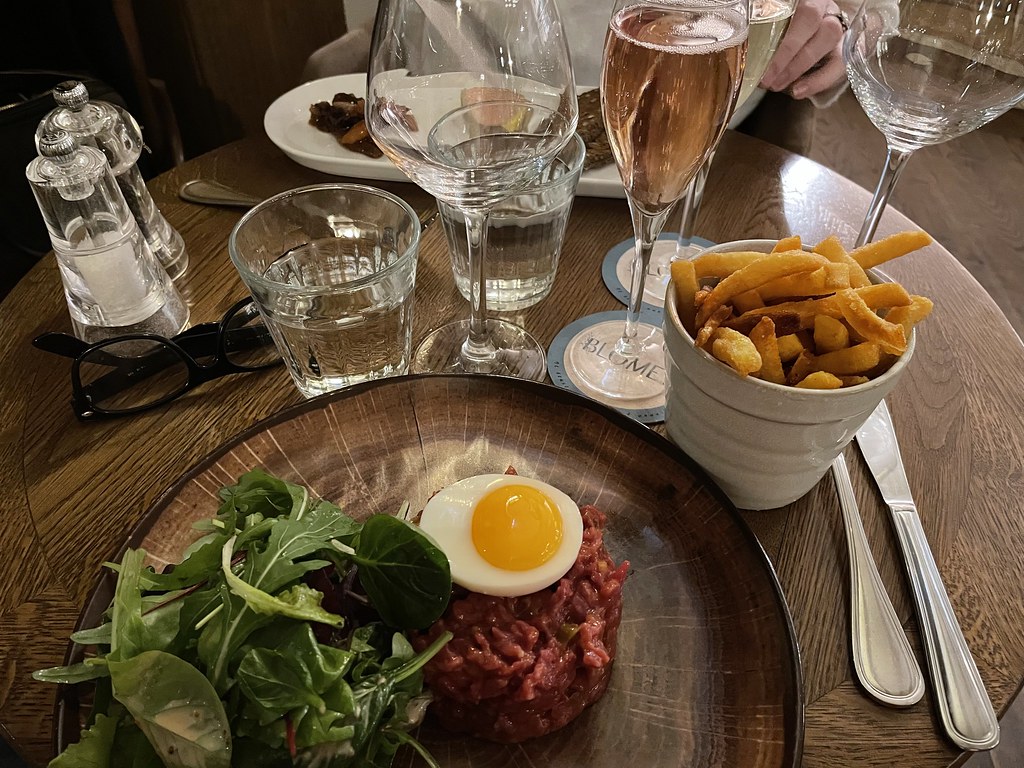 The next morning Forest and I were on the train to Strasbourg! When she first suggested it as a birthday location I thought it was in Germany. Strasbourg has a very long history (going back to the Celts) of being taken back and forth between France and Germany. But French it is, it's the capital of the Grand Est region, aka Alsace, and is also the self-proclaimed Capital of Christmas! 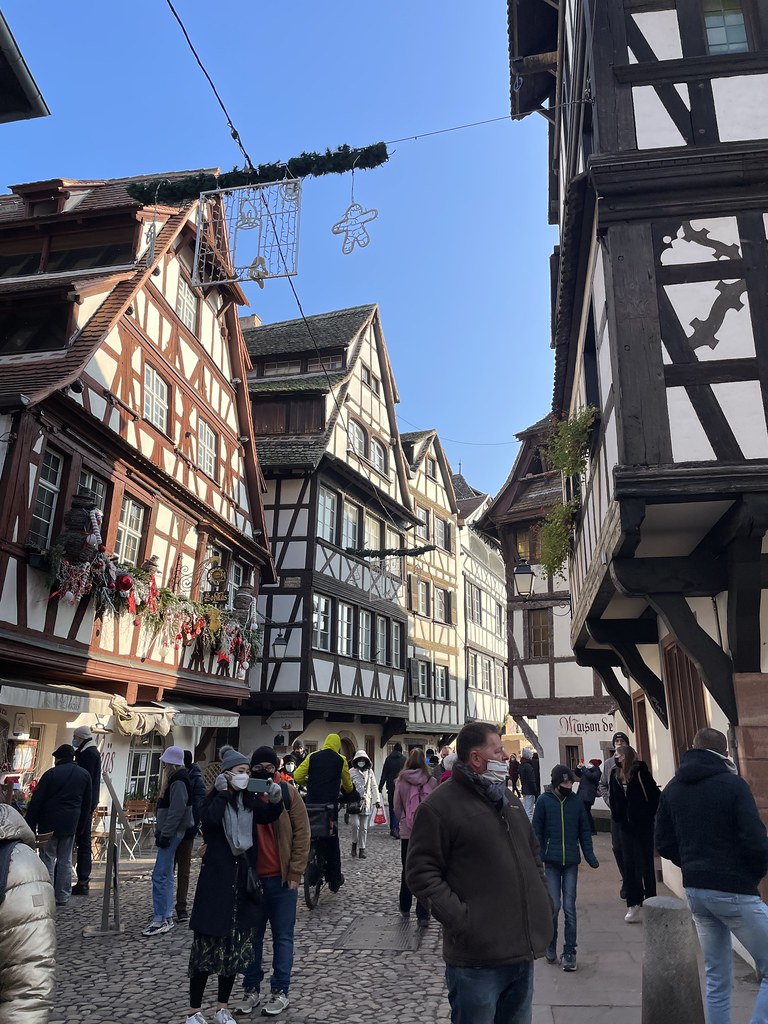 We walked from the train station onto the Island of Petit France, the cobblestones and half timbered buildings instantly charming us. We were staying at the very central Regent Petite Hotel and were able to check in and leave our bags as our room wasn't quite ready but our lunch reservations were. Strasbourg was very strict with their mask mandate so even walking outside we were reminded by locals to have our masks on.
We celebrated my birthday with lunch at 1 Michelin star Au Crocodile, which was easy walking distance from the hotel. In fact everything is pretty easy walking in Strasbourg as the old area is very small. 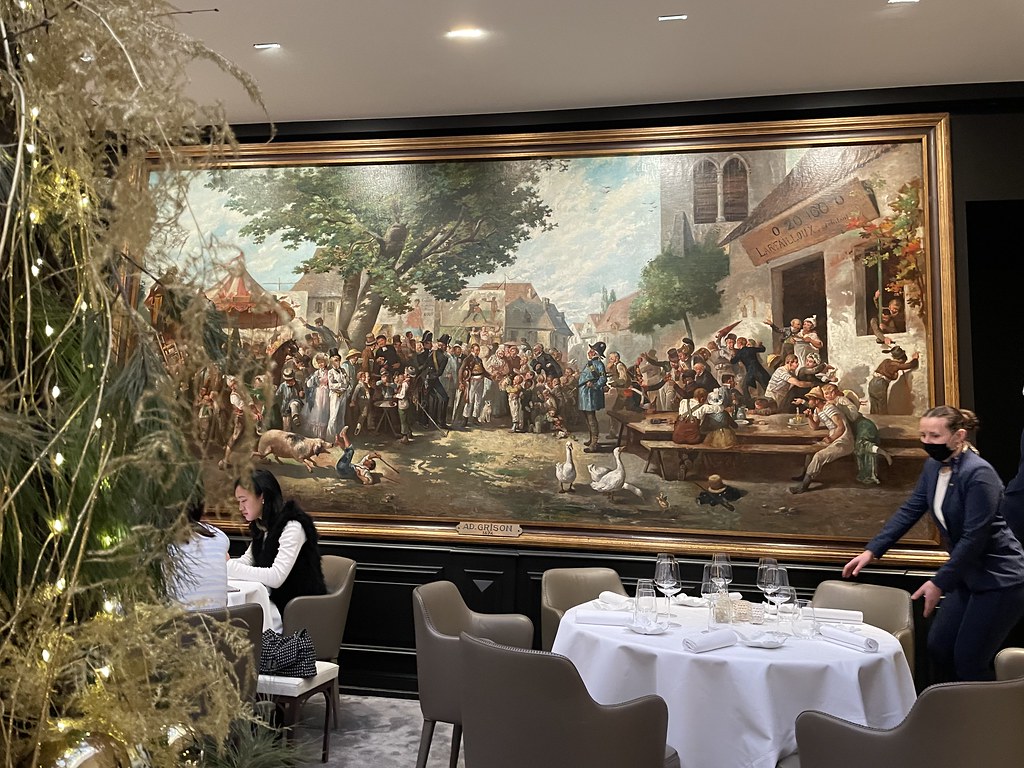 Au Crocodile is a lovely white tablecloth spot, with beautiful silver and china. It's a fairly small dining room but the painting that takes up one whole wall is not!
We had a great time and both thought lunch overall was delicious. One thing that was quite unique was that there were three menu options at lunch and we were able to choose different ones. Usually set menus have to be taken for the whole table.
We kind of went all out with Forest getting a ridiculous amount of truffles on one dish, and me having both a foie cooked en croute and carved tableside as well as a lobster dish in which they made a lobster broth and served it to both of us hot in little shot glasses. 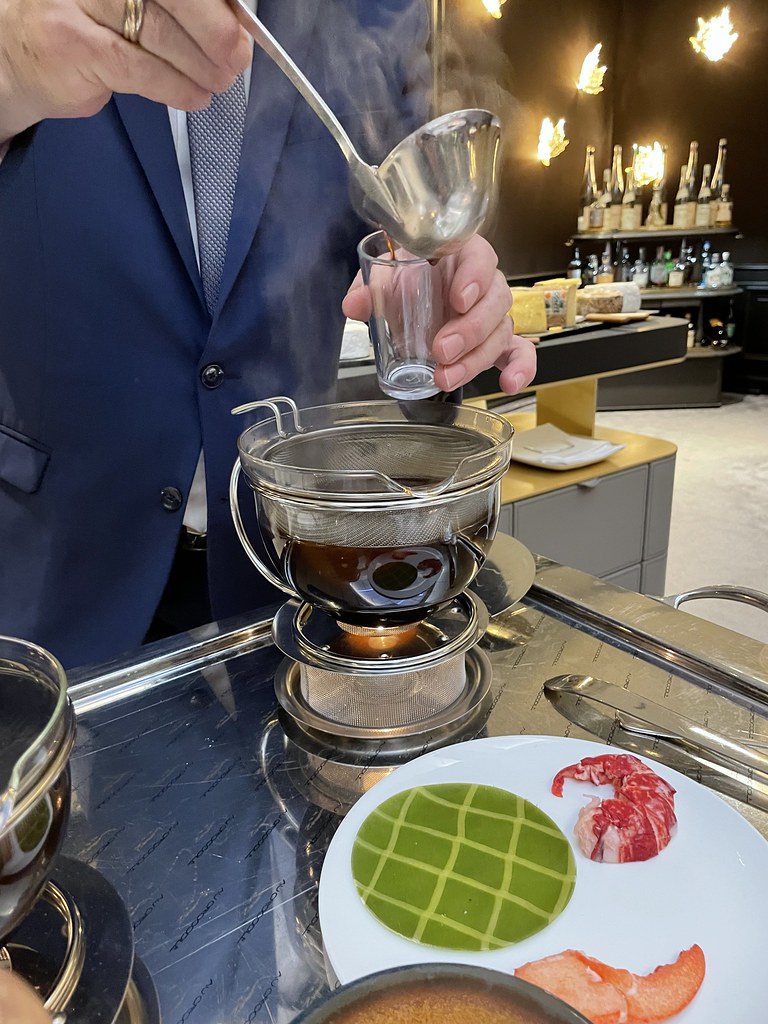 And the cheese trolly was impressive with cheeses unique to the area. After our dessert we had a lovely pour of poire (pear brandy) served in stemless glasses. Very elegant. 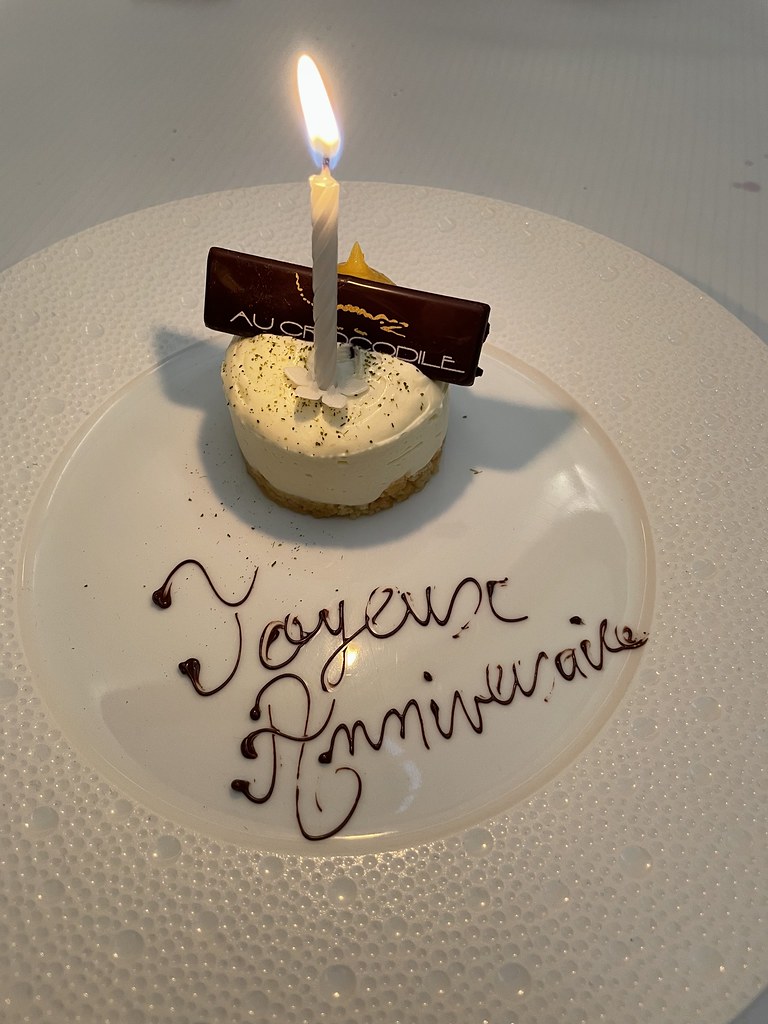 There were a few hiccups with service though, like the fact that when Forest was asking about a couple of different Alsatian Pinot Noirs to go with our meal the somm tried to upsell her on a 200€ bottle! Ah well, we probably seemed posh! haha!
After a quick change back at the hotel we set out for our night at the Christmas Markets. The Christkindelsmärik in Strasbourg is the oldest in the country, dating back to 1570. When France took it from Germany they realized that the market was quite a big draw even back then, so they continued the tradition. It's also the largest in France with 300 stalls set up in different parts of the town. 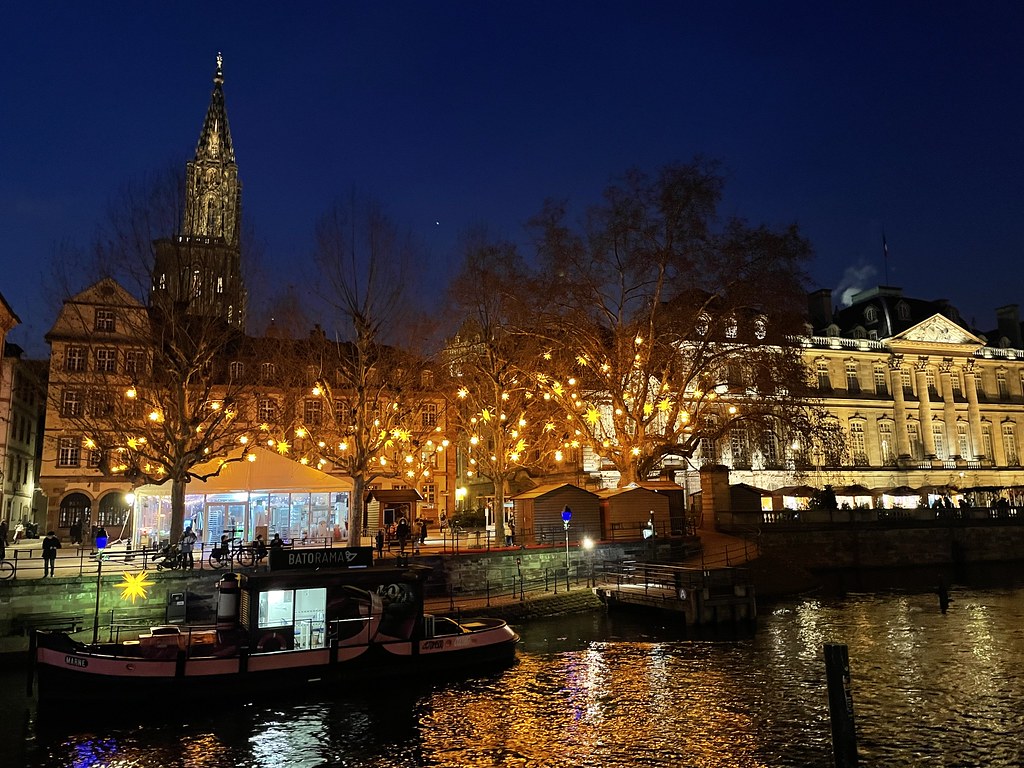 We walked along the Ill River where 600 illuminated stars are hung in the trees. When we got to the Corbeau Bridge we walked across and entered the Porte des Lumières, the official entrance to the Capital of Christmas. We also had to show our pass sanitaire to cross the bridge, and of course masks were required. 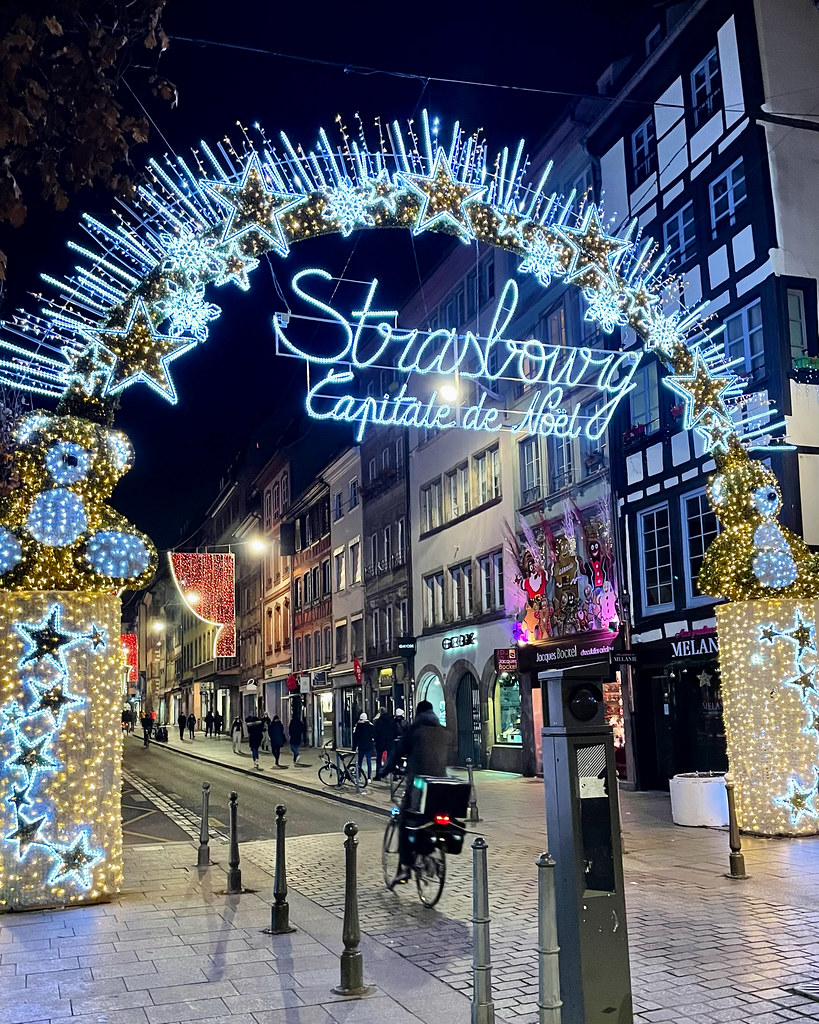 There may be 300 stalls but they are all pretty much selling the same things! Some cute stuff, some tacky, lots of sweet cakes and cookies, everything was all lit up and very festive. And all in the shadow of the very beautiful cathedral. Because of Covid we couldn't stroll while drinking our hot mulled wine; they had designated areas for eating and drinking. 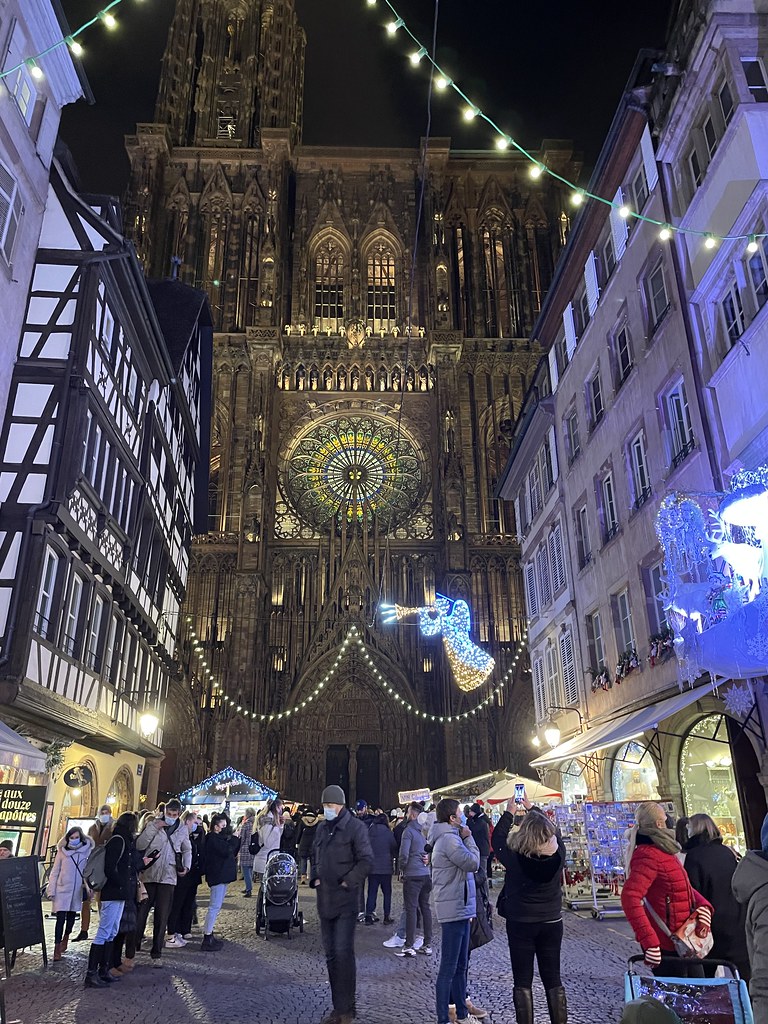 Different streets have their own Christmas decoration themes and some businesses also put up huge scenes over their doorways. It's all quite a production! 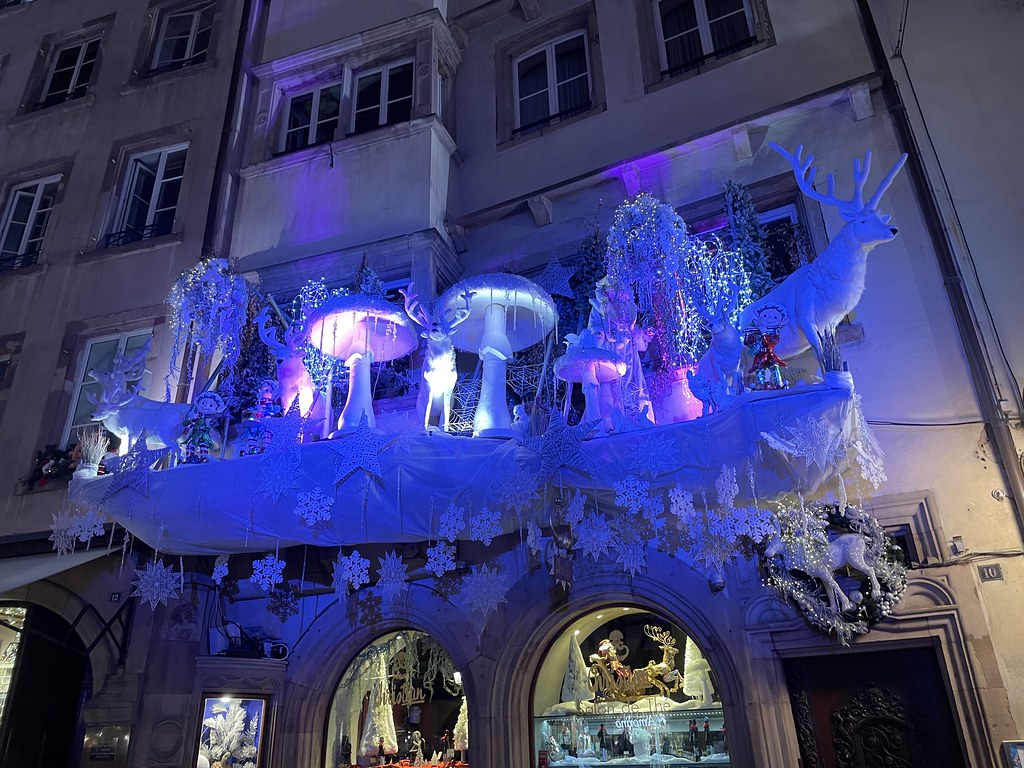 Right near the cathedral I noticed an antique shop that had some really interesting items in the window. We rang, were let in and greeted by the owners grandson. He was awesome and took us around playing "what do you think this is?", possibly both of our favorite game! If you are in Strasbourg do yourself a favor and stop in at Antiquités Bastian.
Enough shopping, time for cocktails! We found Code Bar down a little side street and immediately loved the vibe! The bartenders were wearing ugly Christmas sweaters, they were pouring flaming Blue Blazers, the drinks were delicious, and they included us in a shot round. Highly recommend. 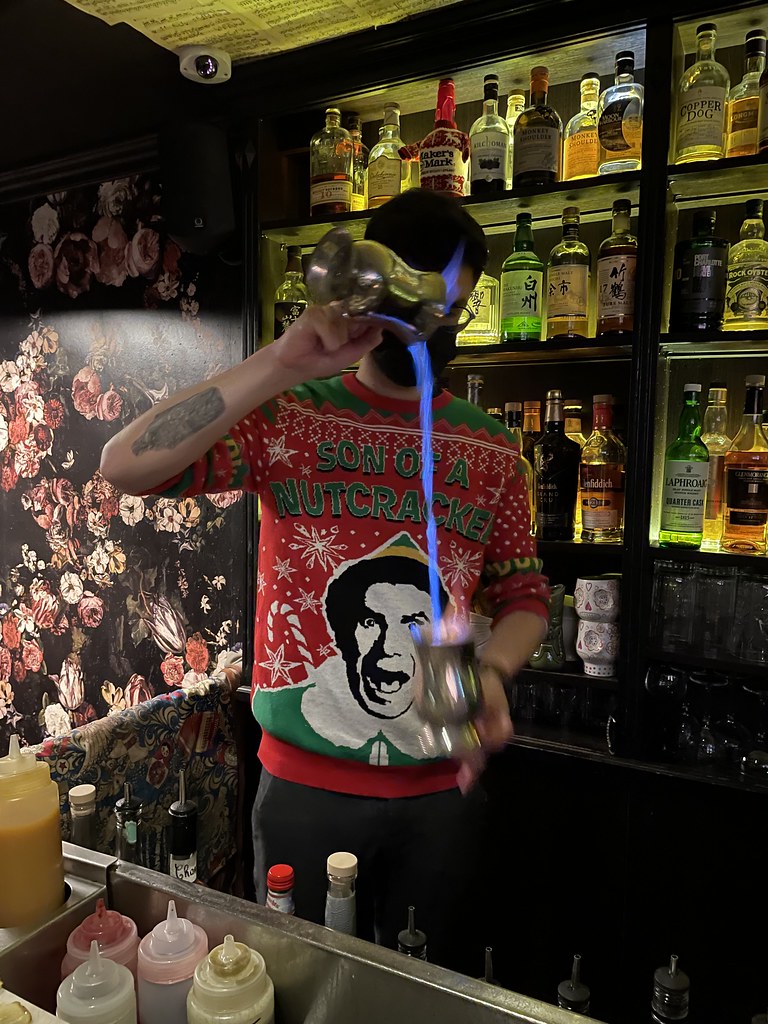 We also stopped in at Le Douanier for a drink which I did not like. It was too clubby for my taste and the drink wasn't very good. 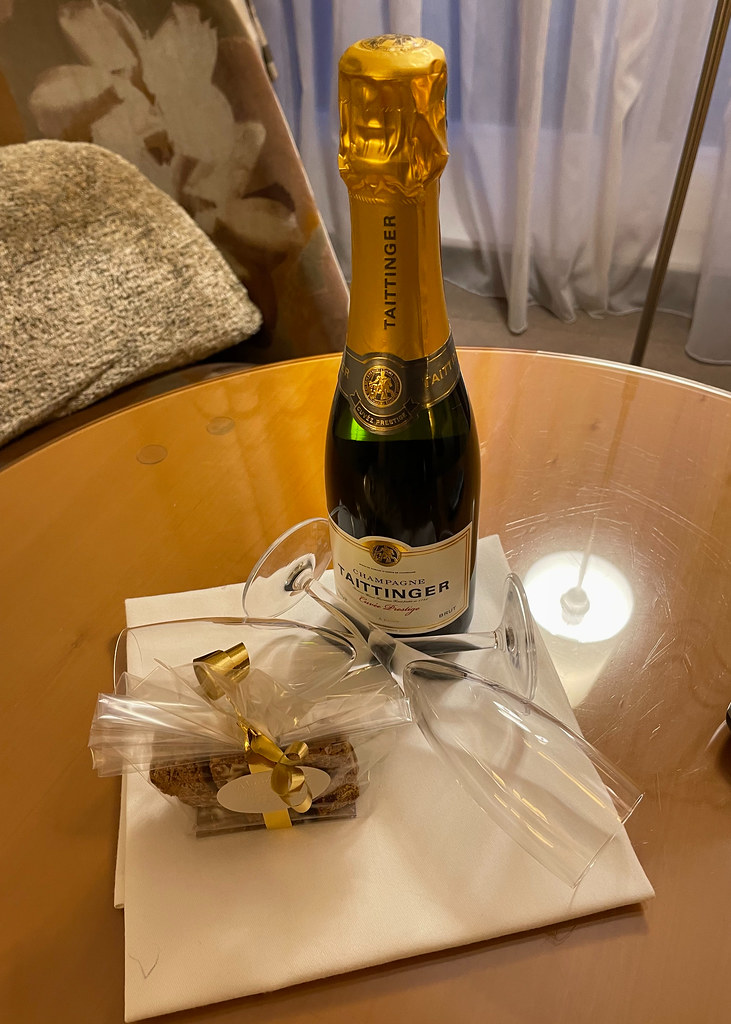 Back at the hotel we opened up the small bottle of champagne they had put in our room, ordered up some room service omelets, and toasted the last hours of my birthday. It had been a really fantastic day! 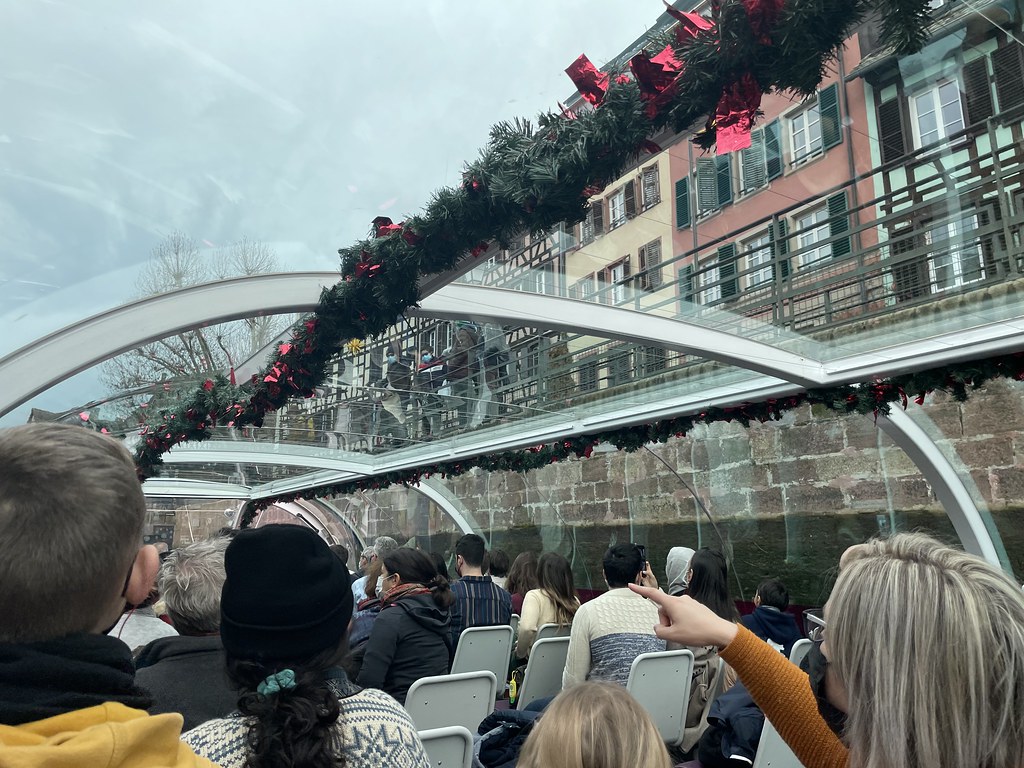 The next morning we took one of the boat cruises along the river. Everyone who had been to Strasbourg said this was a must but I'm going to tell you that we really didn't enjoy it. Our boat was completely enclosed with glass which made it really hard to get any nice photos. It was also really hot on the boat as they had the heaters on with no fresh air at all, combine this with Covid and it was uncomfortable for a whole host of reasons. The audio guide was down right annoying, talking all about Santa and hardly anything at all about the buildings. We did see some things we wouldn't have seen otherwise, in different parts of the city, and also went through the locks and by the covered bridges, but all in all, I'd skip it!
We had a great lunch afterwards at SuperTonic which serves up fun takes on traditional sausages and had a great gin & tonic menu. It's also in a cute part of town that we hadn't been in before. 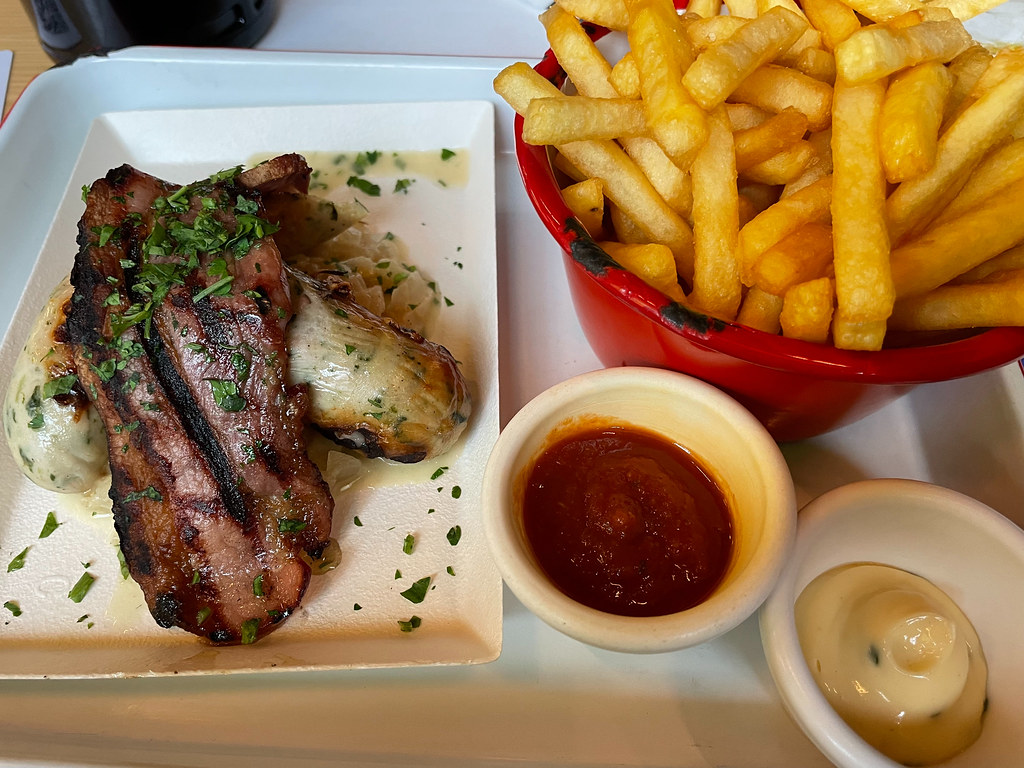 After lunch we walked back to the Isle of Petit France and went through the Cathedral. This is widely regarded as one of the best examples of Gothic architecture and there has been a church on the site since 1015! 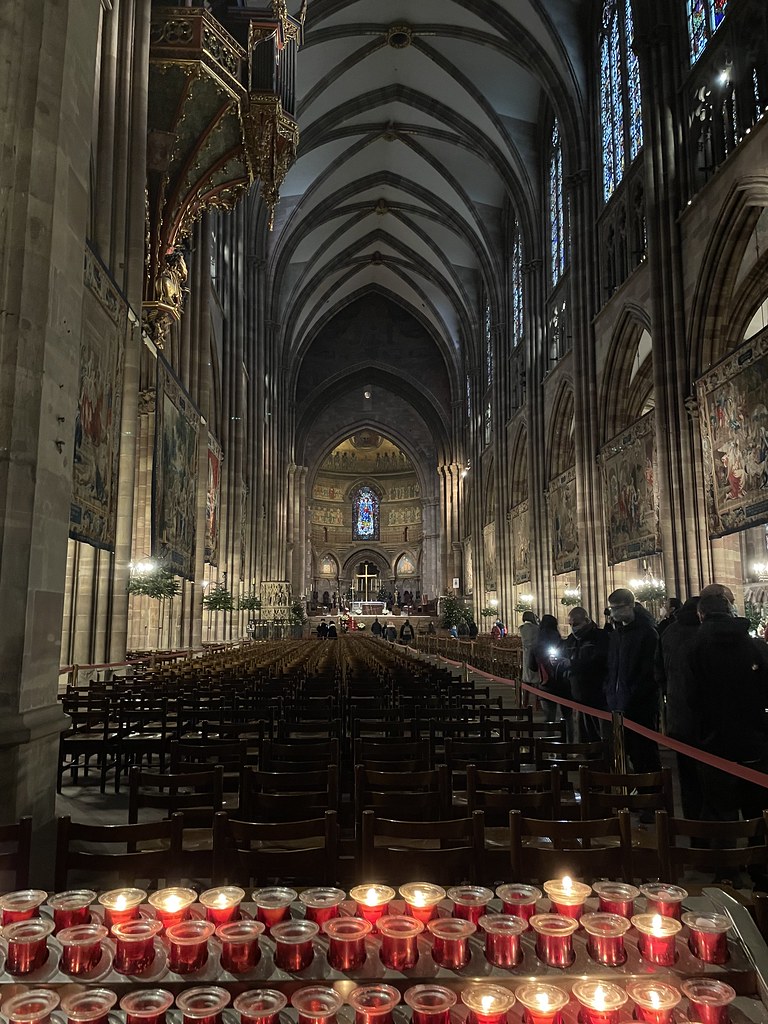 Inside it's very dim, the winter light not quite penetrating the stained glass windows which sit high in the stone walls. As we walked around we came to the very unique astronomical clock. I didn't know anything about it but my research says this, " this mechanical astronomical clock is an invention put together by various artists, mathematicians and technicians. Swiss watchmakers, sculptors, painters and creators of automatons all worked together to build this amazing automate. The present mechanism dates from 1842 and is especially attractive for the work of its automatons, which, every day at 12.30 pm, all start their show." Very cool! 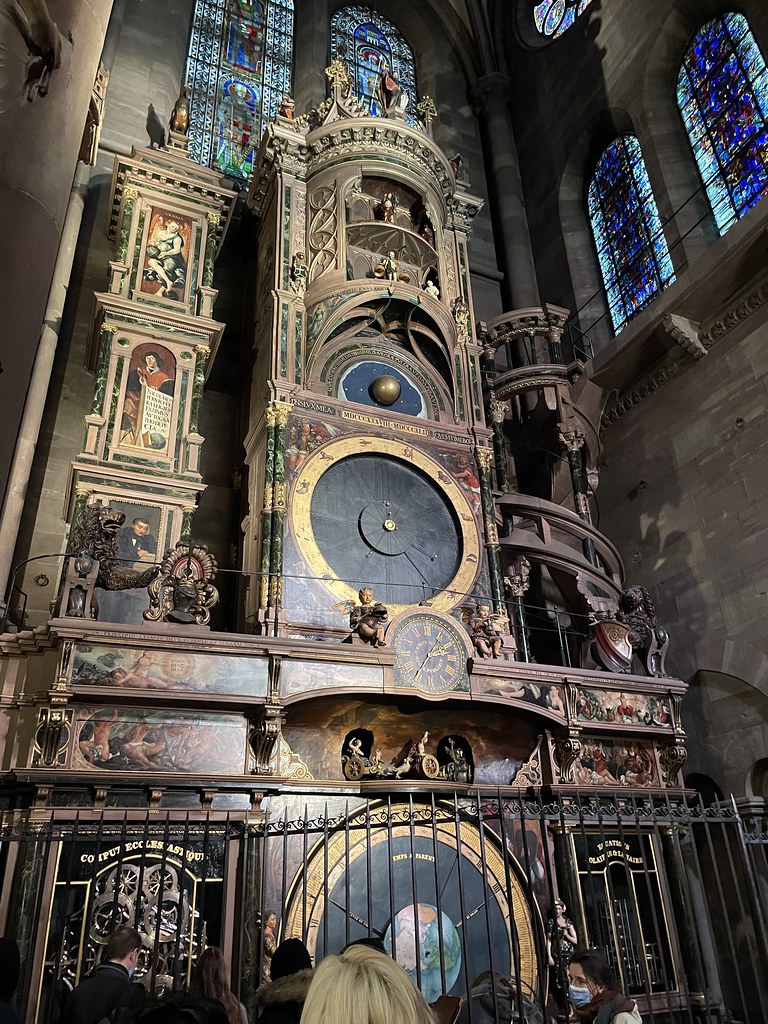 We spent the rest of the afternoon shopping through the Christmas markets that we hadn't made it to the day before and visiting a few local spots for wine and cheese to take to Forest's in laws for Christmas. 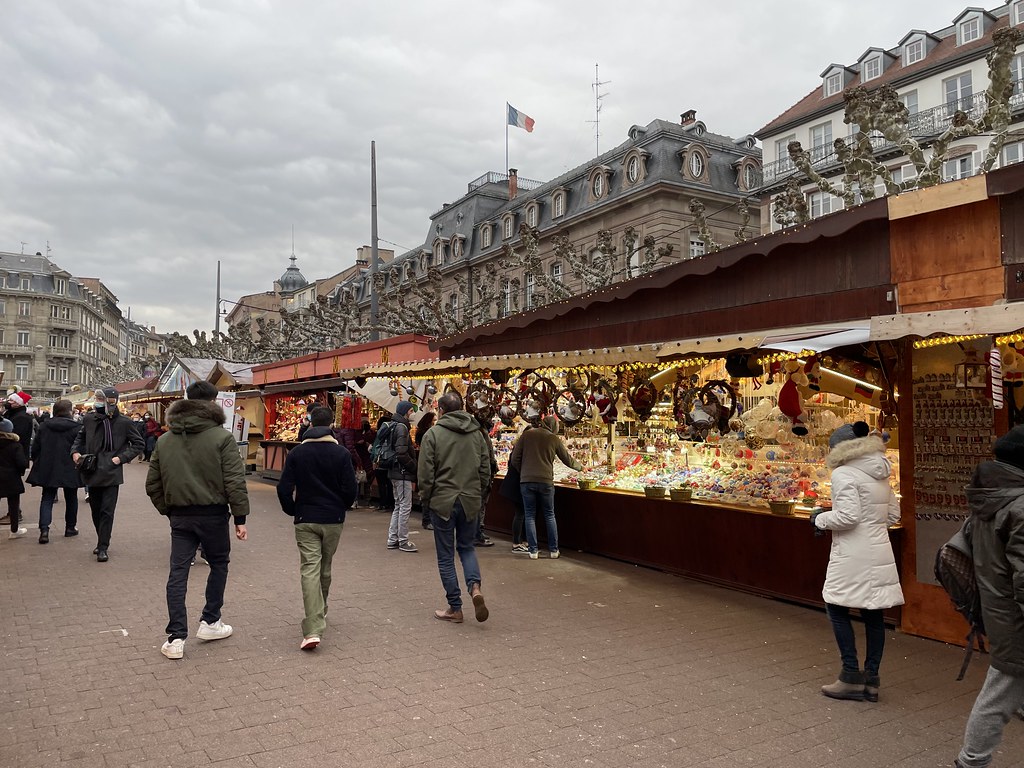 Our train back to Paris wasn't until 8pm so after our shopping we dropped off our bags at the hotel and set off in search of some Alsatian wine. The light in this city at dusk is absolutely gorgeous so we also spent a bit of time on one of the bridges taking it in. 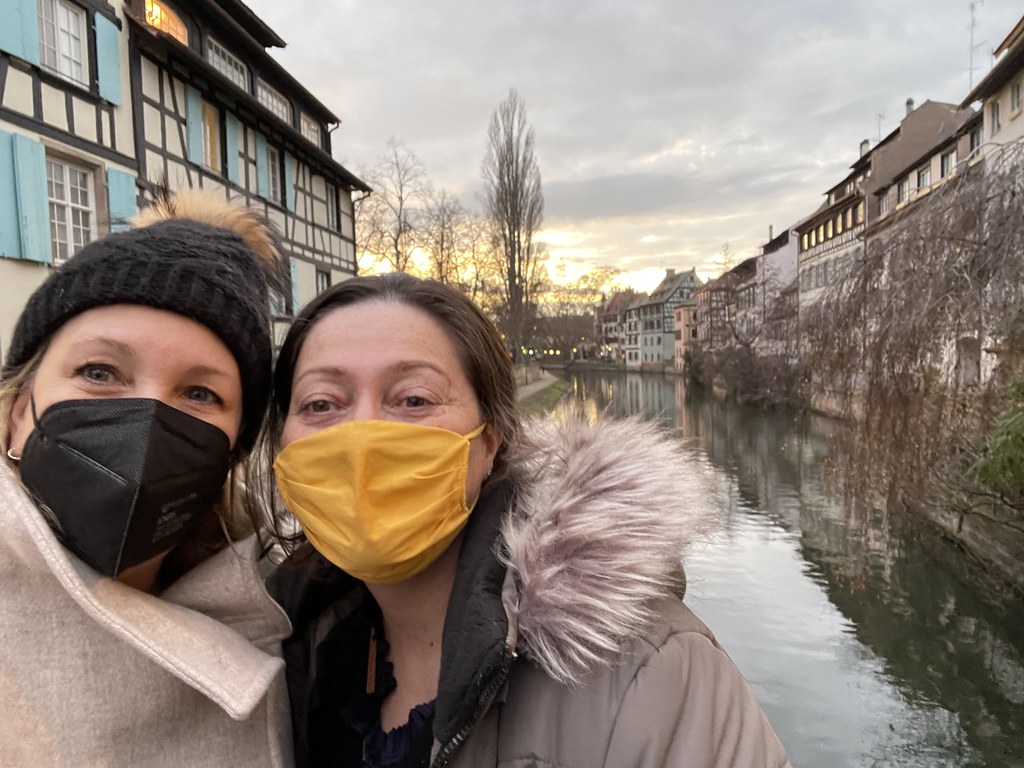 And right before heading to the train station we stopped into Secret Place at restaurant Aedaen. We walked through the pizzeria to the back wall and saw a pretty obvious secret entrance, but for the life of us we could not figure out the opening mechanism. 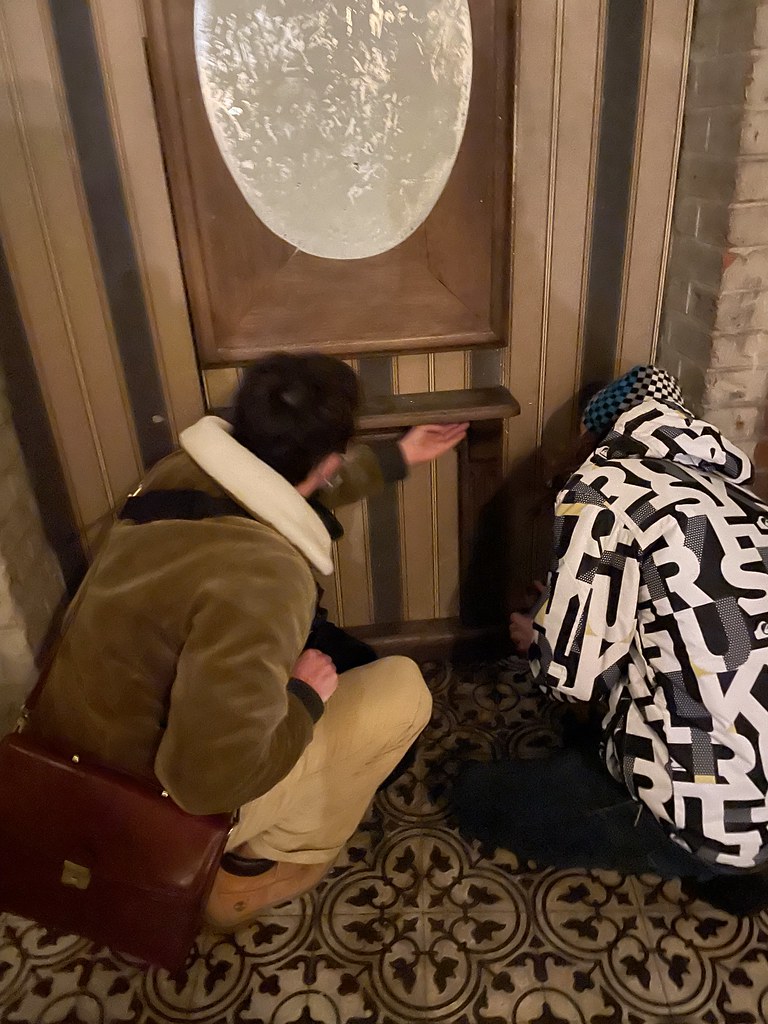 A couple of guys showed up and also set about trying to find the way in; we let them put their fingers all over the surfaces while watching! haha! 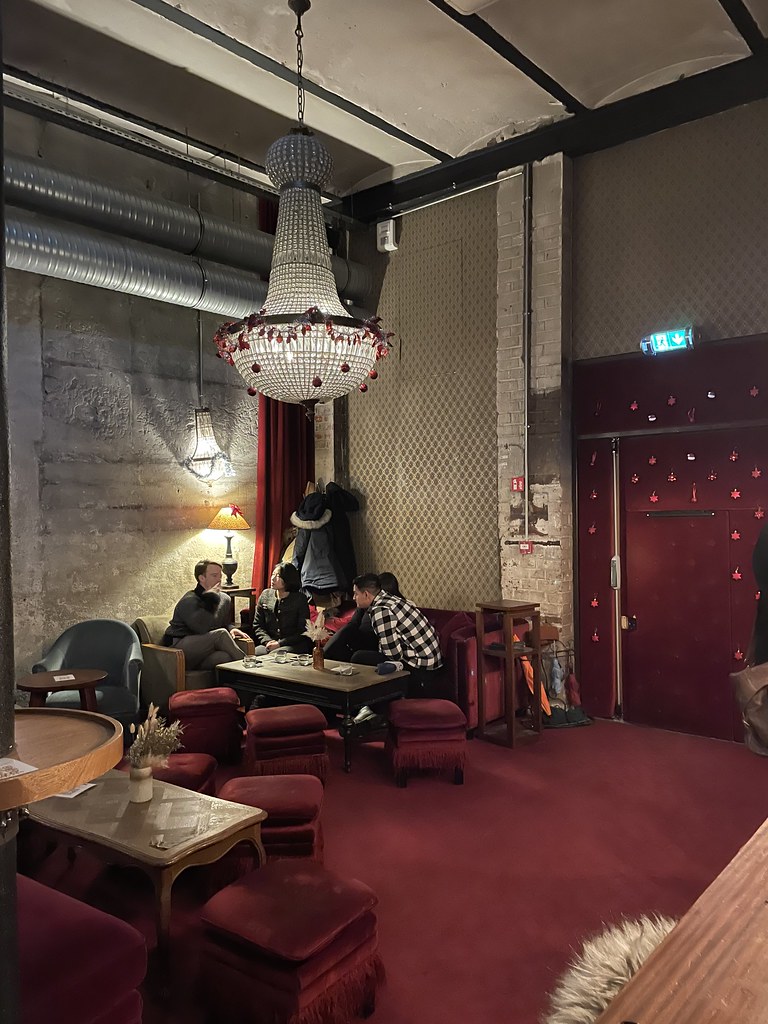 Inside is a beautiful speakeasy with lovely drinks. It was the perfect final stop on this super fun birthday getaway!
We walked over to the beautiful train station, the old building encased in modern glass, and had a little dinner onboard of Alsatian wine and ham/butter/baguette sandwiches. The Francophile in me was more than a little pleased!

All photos of Strasbourg here.