My friend Aaron always has a great list of restaurants to check out going for various cities. I mean I do too but I feel his is next level. So when he suggested we do a weekend of eating, drinking, and hiking in San Diego I agreed immediately!

I decided to fly into LA and drive down with Aaron. It was an easy flight on Alaska and as the Covid pandemic was still an unwelcome guest, masks were still required. It was about a 2 hour drive on a lovely sunny Friday afternoon from Orange County airport to San Diego.

Originally Aaron and I had decided to stay in the La Jolla area in an Airbnb based on the location of some of the places we were going to check out. Our plans changed a bit but we kept the Airbnb. This was the first time either of us were staying in a place that would be shared with others. Per the listing we were staying in one wing of a 5400 square foot mansion, the owner in the other wing. Our wing had 3 bedrooms, all with en suite bathrooms, and a common kitchen area which we would be sharing with the very nice foreign college students who were living there. A very unique stay! The mansion was huge and had lovely views of the ocean but I'll just describe it as Grey Gardens and leave it at that.

On our first night we took a rideshare into town and started with drinks at J & Tony's Discount Cured Meats & Negroni Warehouse. Truely, that is the name of the place! 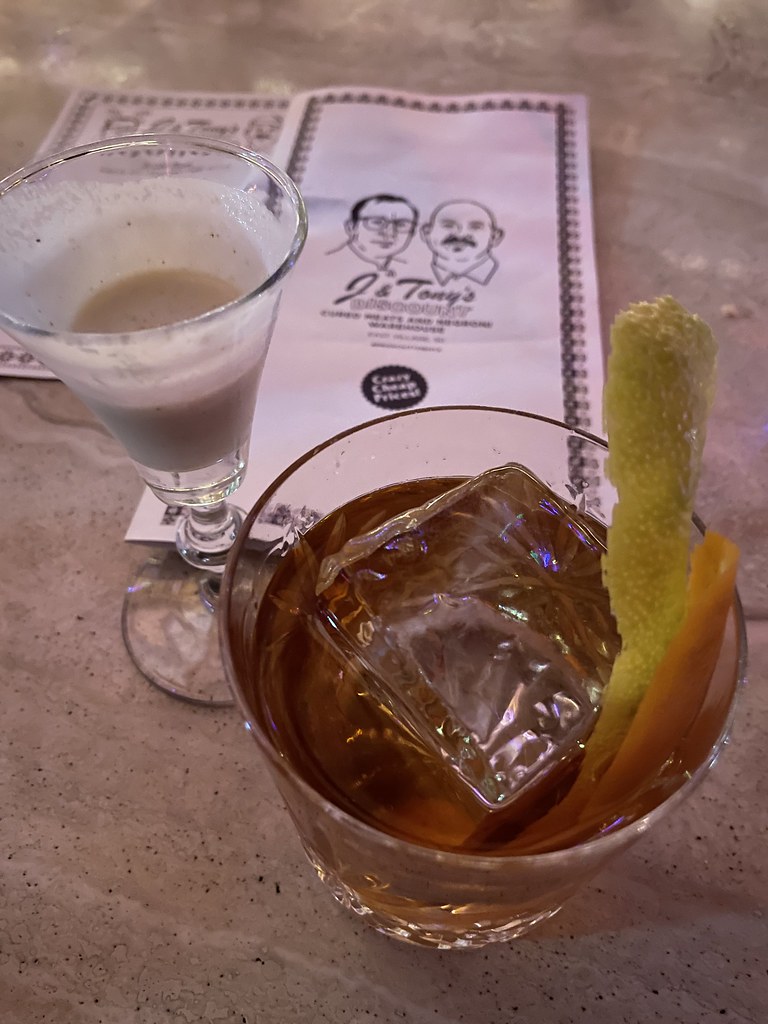 This bar is ridiculously fun! There's a full sized Ronald McDonald statue, and a dinosaur, and a disco ball, and a lot of other quirky stuff. The bartenders are great and the drinks are delicious. As it was the holiday season when we were there we were able to try some special drinks including an Irish Coffee and a shot of nog. I highly recommend this spot!

It was a short walk to Callie, which had just opened earlier in the year. Chef Travis Swikard was previously the Chef for Daniel Boulud's restaurant in NYC so it's also a hot reservation to secure. The menu is Mediterranean inspired and the flavors are absolutely delicious! 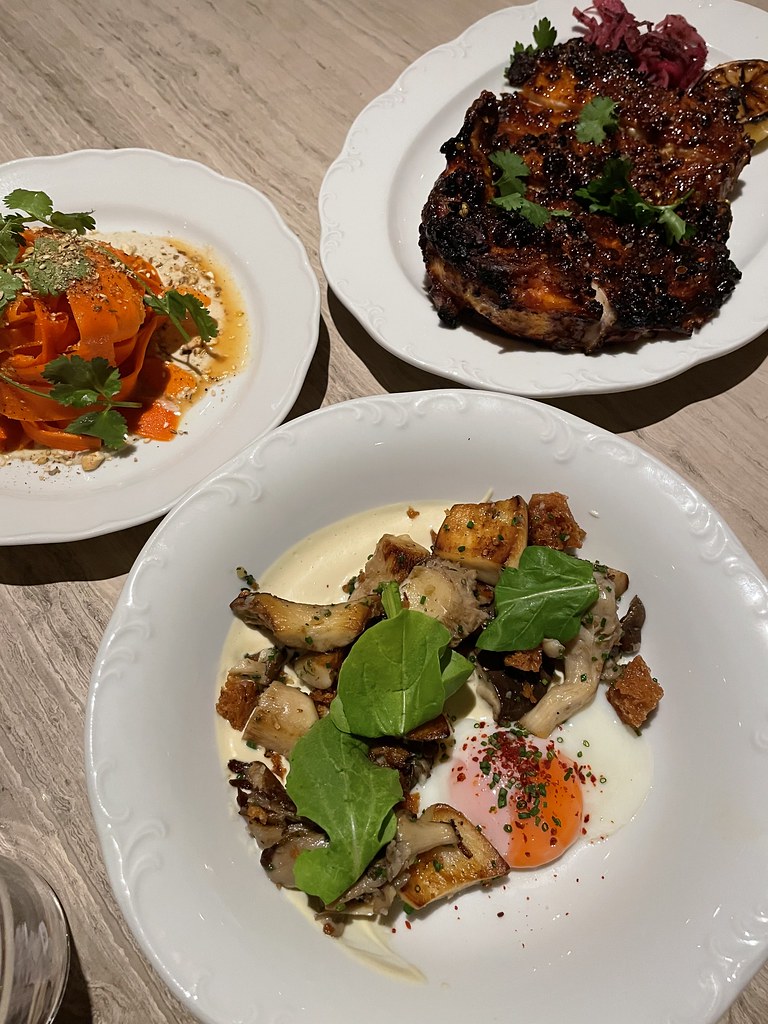 Everything is meant for sharing so that is exactly what we did. We started with the hummus which was so silky! Our beef tartare was served on top of a smear of labneh and came with house-made lavash to scoop it up with. Raw carrots were shaved and tossed with cashew dukkah and our braised mushroom dish had a perfectly poached egg in which to drag the funghi through. But the stand out was the Aleppo Chicken. Spiced, grilled, and served with yogurt, coriander honey, and sumac pickles it was an incredible dish!

We loved our dinner here and I've already recommended to it many. But it books up way in advance so reserve early!

For our after dinner drinking we had made reservations at the newly opened Young Blood. It's a speakeasy style bar in the same building as Noble Experiment (a favorite of mine) and was opened with the help of NYC's Attaboy creator Sam Ross (another favorite of mine) so chances were high that I was going to have a great time. 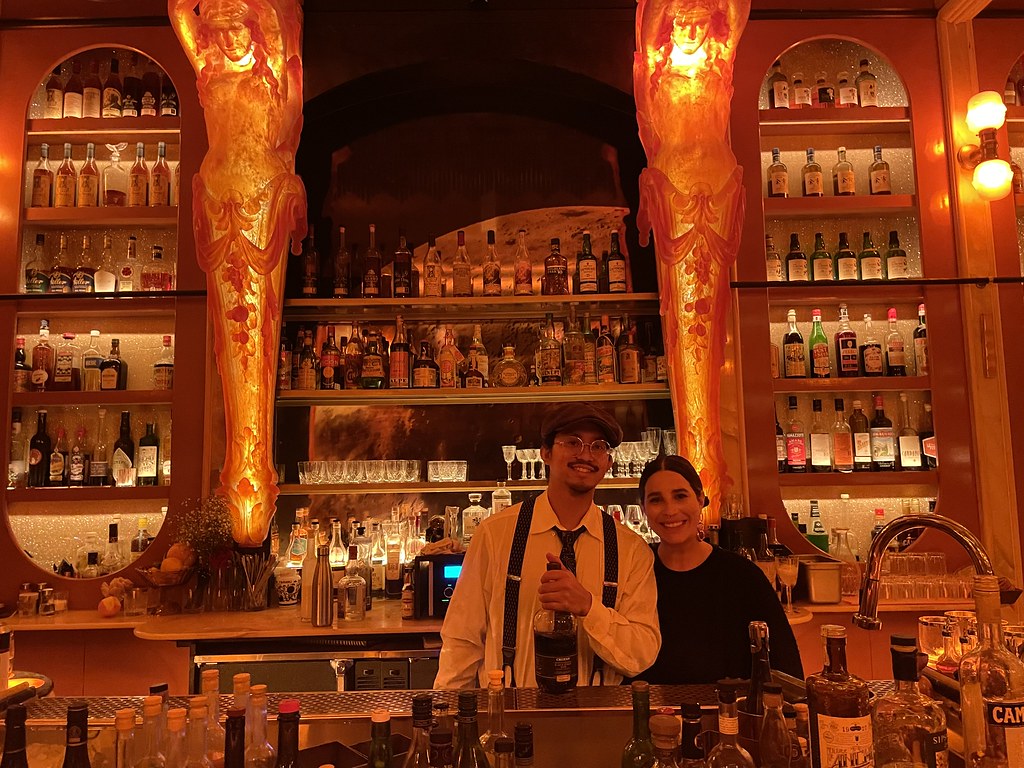 The bar is reservation only and there is no menu. You're given a 90 minute table and the staff serves you champagne followed by three "designed for you" cocktails. It's $65 total. 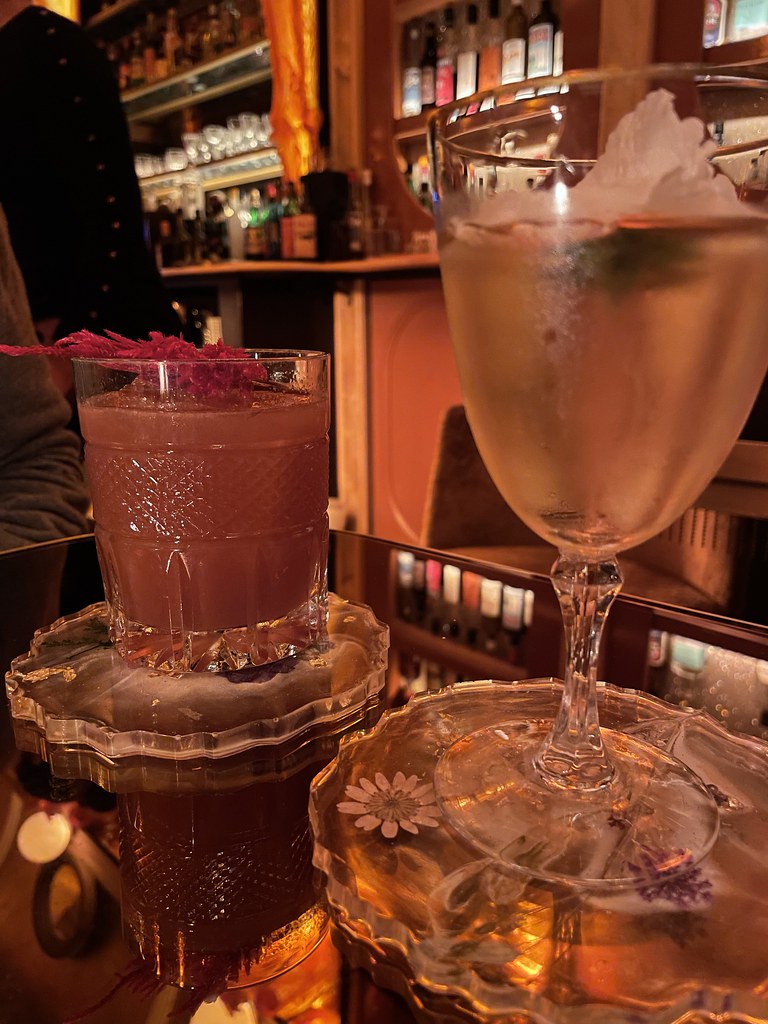 Young Blood is swanky, quirky, delicious, and fun! I can't wait to go back! And if you visit, be sure to check out the very unique patterned carpet!
Day two started with a lovely stroll around Old Town before pulling into a strip mall for lunch at 1 Michelin star Tadokoro Sushi, which the Callie chef had told us about the night before. 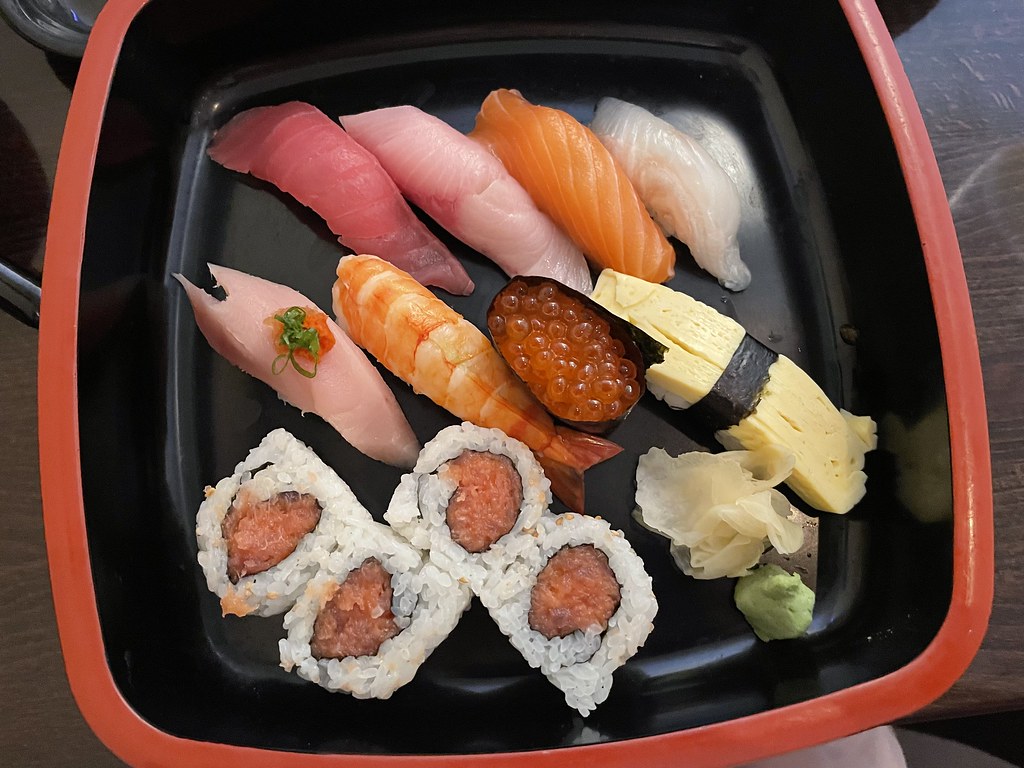 We each had the $31 lunch special which came with 8 pieces of nigiri & ½ roll. We added an order of ankimo and also a gorgeous grilled fish head. This was a very good tip that we had been given! Great spot. 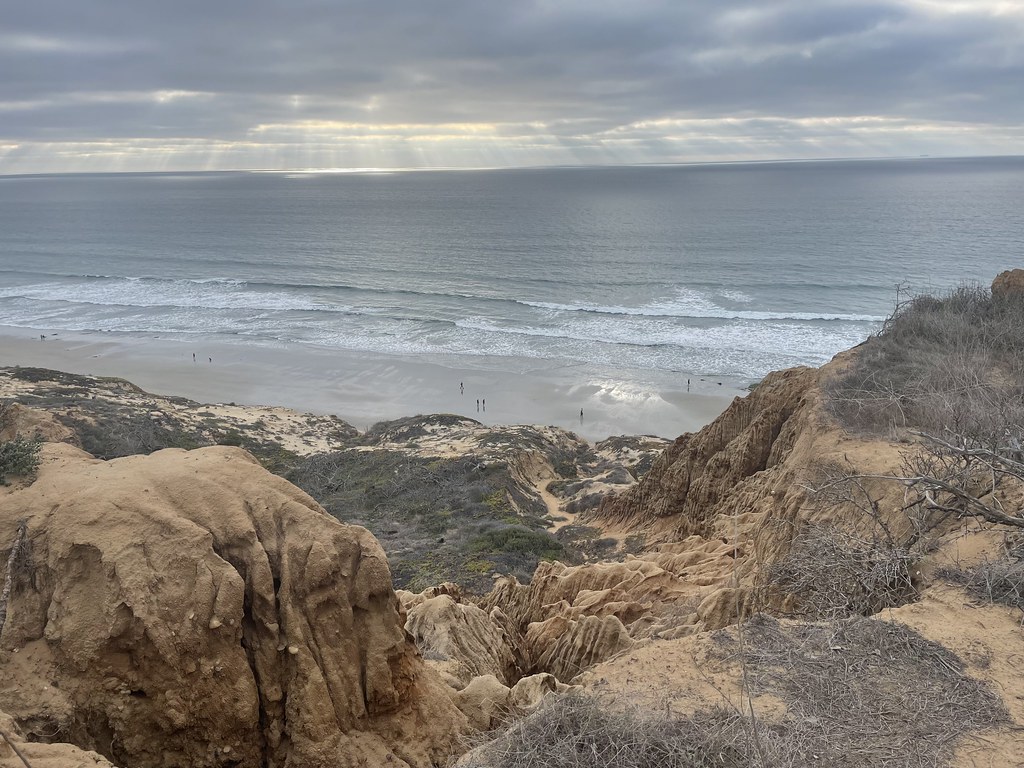 It was about a 20 minute drive to Torrey Pines State Park from Old Town. I'd never been out here before and it was so pretty! We hiked the Broken Hill Trail which is a 3+ mile loop through the eroded cliffs with stunning views of the beach and the ocean. 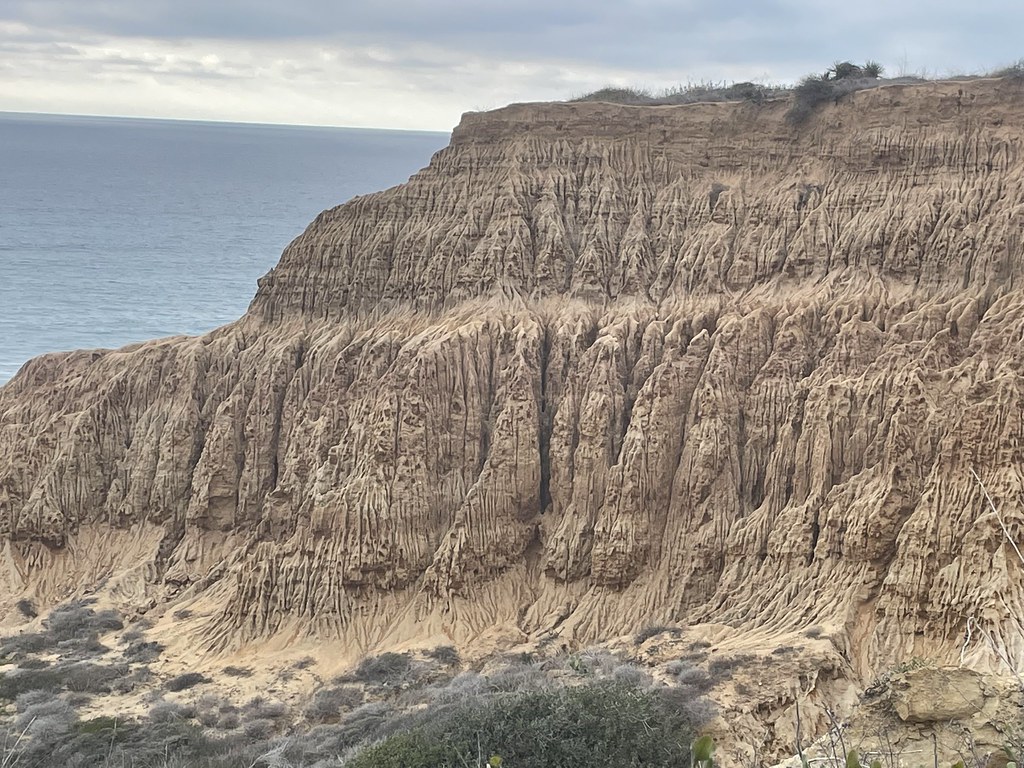 The cliffs are so unique! It was really a beautiful hike with a very small elevation gain. The loop took us about 1 ½ hours. We were back at the mansion to enjoy some freezer cocktails in the hot tub and then light Aaron's menorah while we got ready for our big dinner out.

Addison, a 2 star Michelin, is in the Fairmont Del Mar so I had in my head that it would be quite modern and swanky. We arrived early in order to enjoy a pre-dinner martini. The gin selection was very basic which was a disappointment. But we got two seats in front of the lobby fireplace which was great. And they even brought me a stool for my purse which always makes me happy! 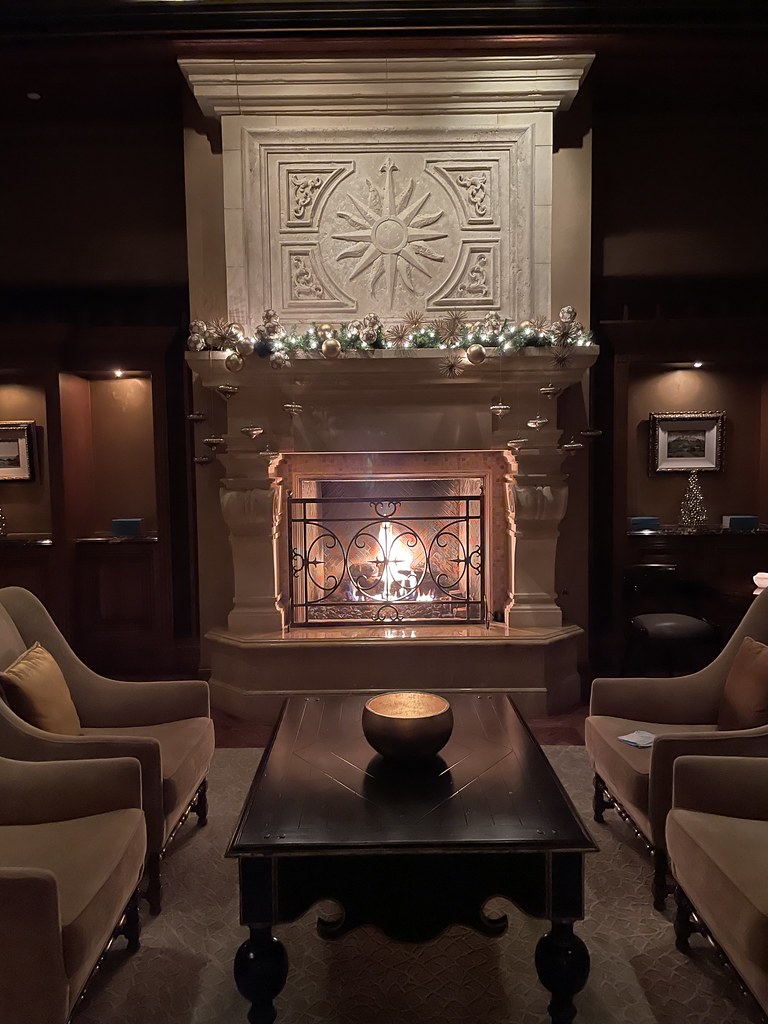 We were moved into the dining room and right away the ambiance was not a hit for me. It is very stark, not one single thing on the table or the walls, which felt weird. It felt very old fashioned and everything was varying shades of beige. 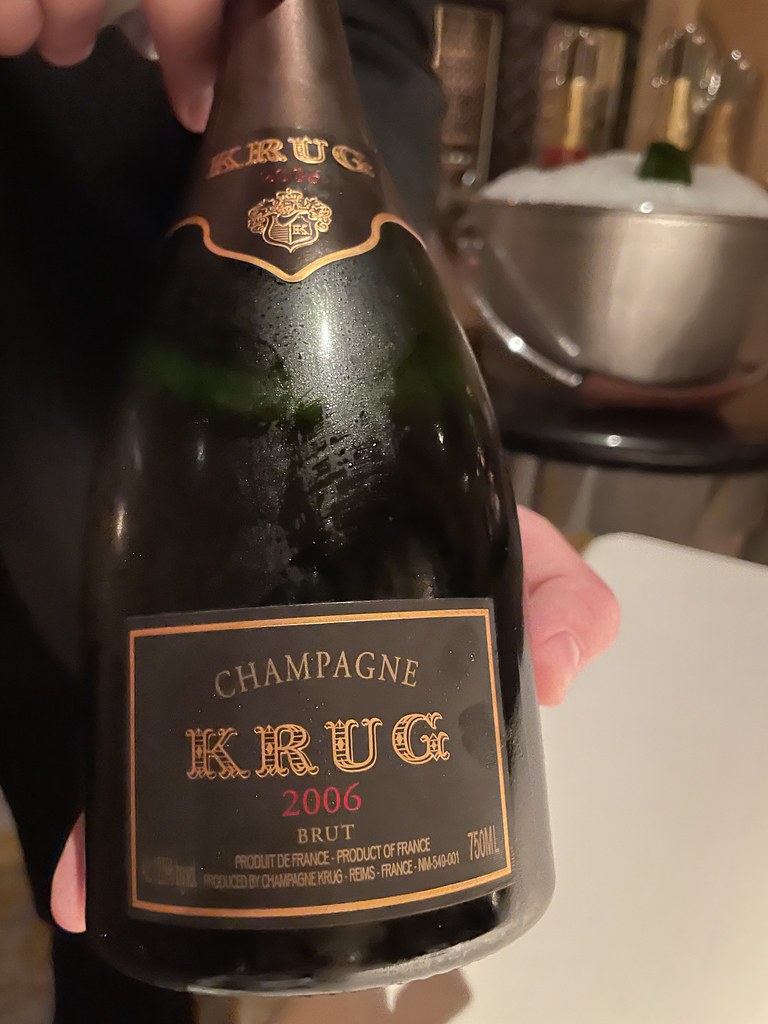 But they rolled the champagne cart over and I immediately forgave them their sense of (lacking) style when I saw they had Krug by the glass as an offering. We started with that and it was lovely. There is only a 9-course tasting menu available which is $298 per person. We were then given the option of three different levels of wine pairings, the most exclusive was a ridiculous price (and we had to ask) so I have blocked it out. We chose the pairing that was the same price as our tasting menu. 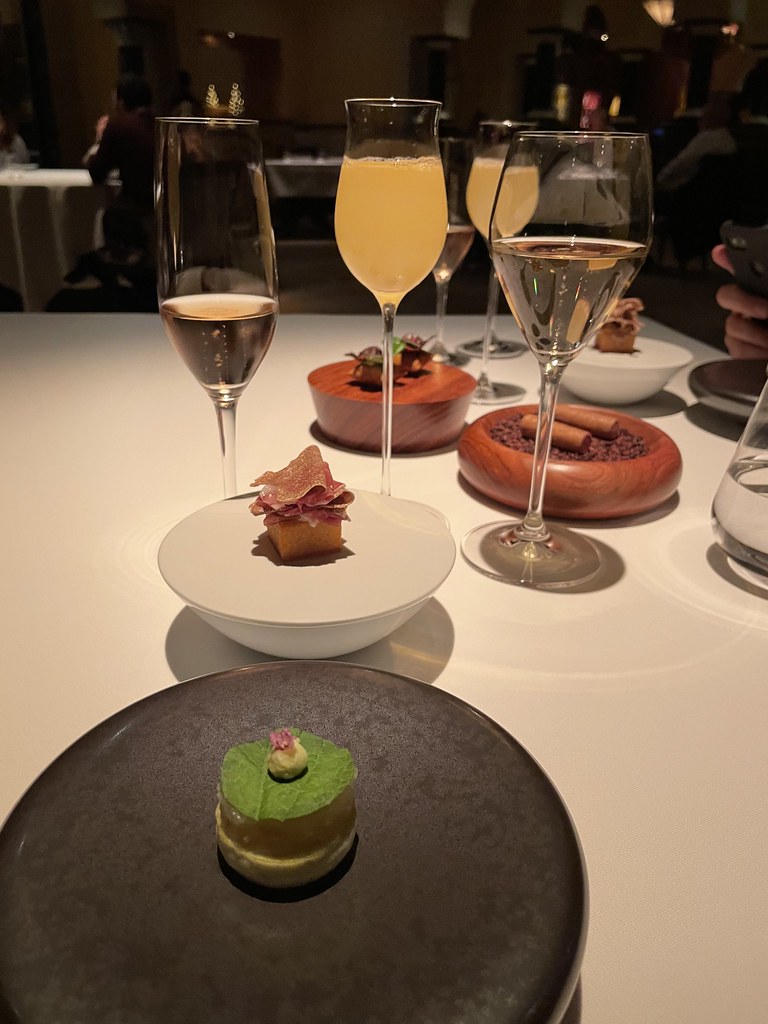 Besides the 9-courses we were started with three little bites and a juicy cocktail. Chef William Bradley created a wonderful tasting menu, most of the dishes had an Asian influence which I loved. The dishes were gorgeous to look at, many were playful and made me smile, and the flavors were mostly all fantastic. 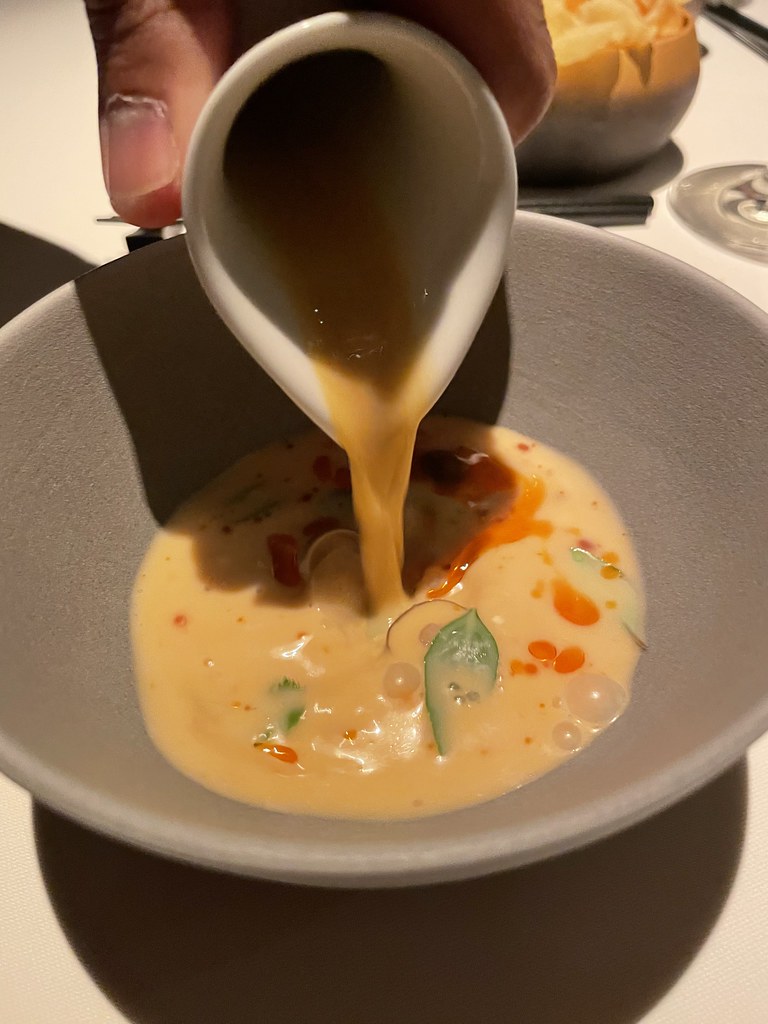 I thought most of the wines were good but I thought they should have been a bit better for the price. We were given a glass of Cristal as a bonus "because the bottle is open and we are closed tomorrow night" was the response when I asked why. Whatever, I'll take it!

The dessert course was also not included in the set menu count and was an array of five different bites! I was stuffed and more than a bit tipsy at this point! 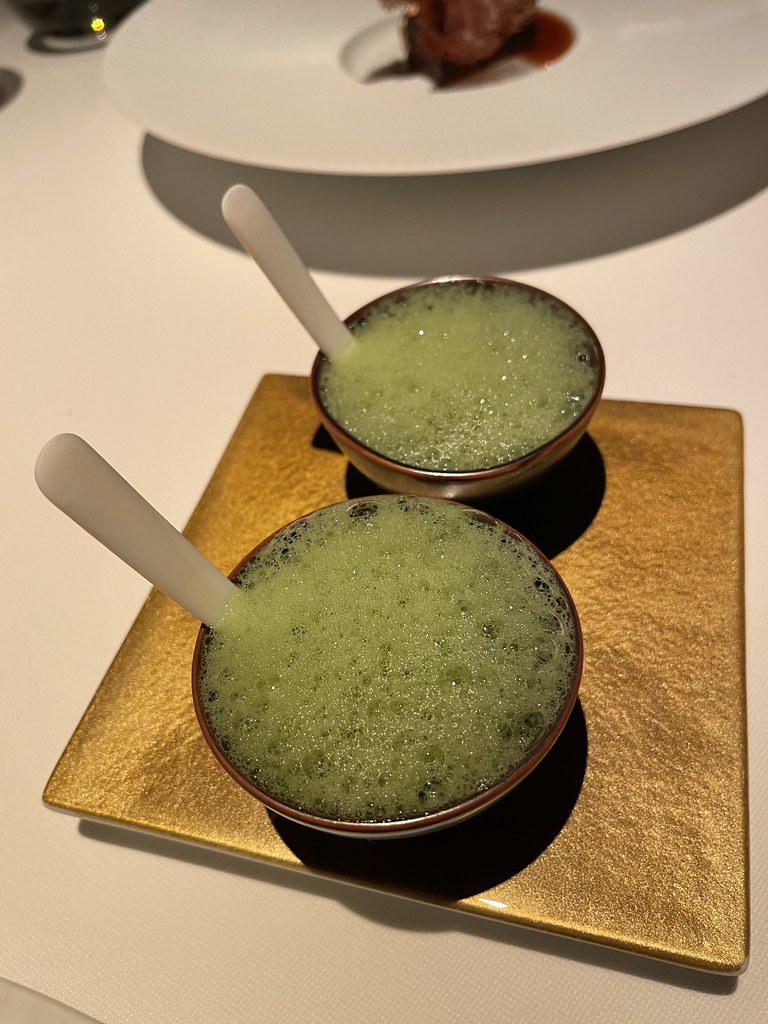 We had a great time but it was a very expensive meal that I personally don't think I would choose to do again. If the room held the same aesthetics as the food then I would have enjoyed it much more. 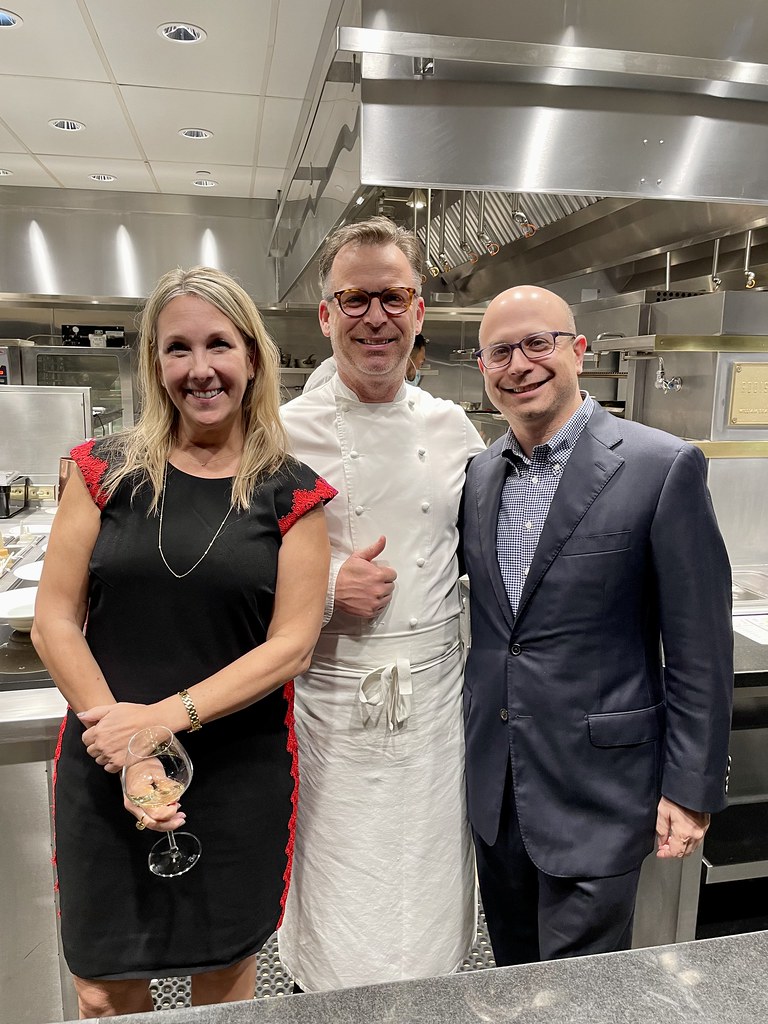 Our mansion in La Jolla was very close to Veterans' Memorial Hill on Mt. Soledad, which isn't just a wonderful memorial but it's the only memorial in the US that honors veterans, living or deceased, from the revolutionary war to now, with an image of the veteran. And of course on clear days there are great views of the Pacific Ocean and the coast cities. 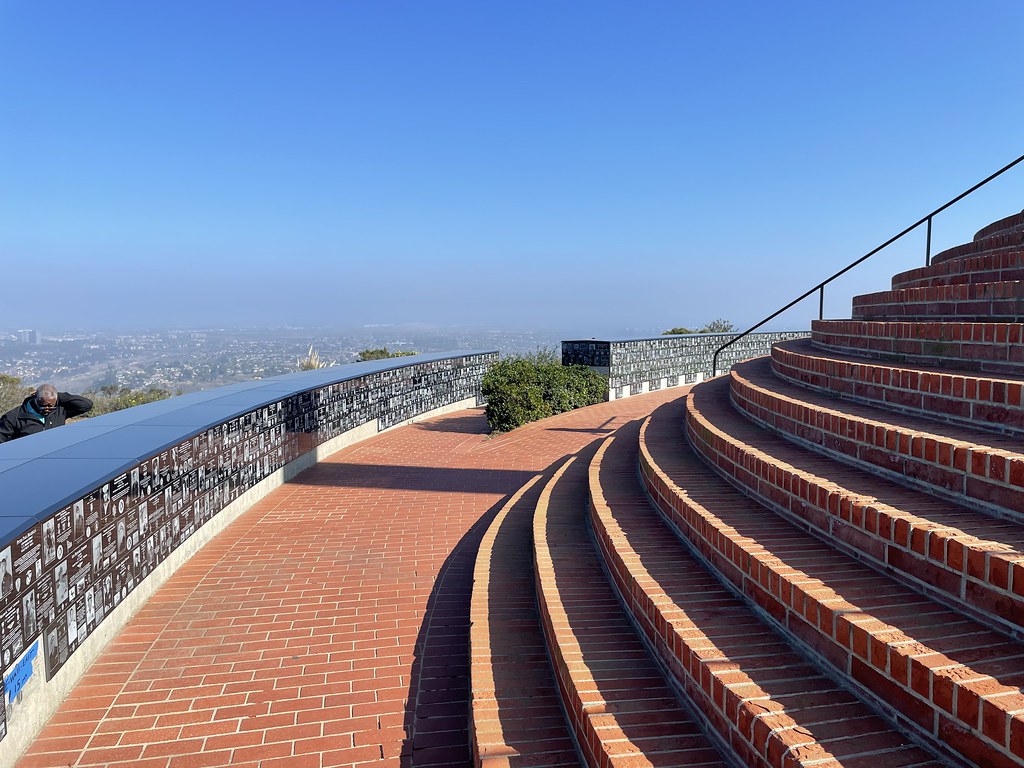 We headed back to Old Town for lunch at another spot our Callie chef had told us about- Tuetano Taqueria. Tuetano means bone marrow and that is exactly what you can add to your taco order! It comes on a stick so that you can scrape the marrow out onto your birria taco. It's crazy delicious! We tried the quesadilla, beans, and consume too. All fantastic! This new location has a really nice outside patio to eat on also. 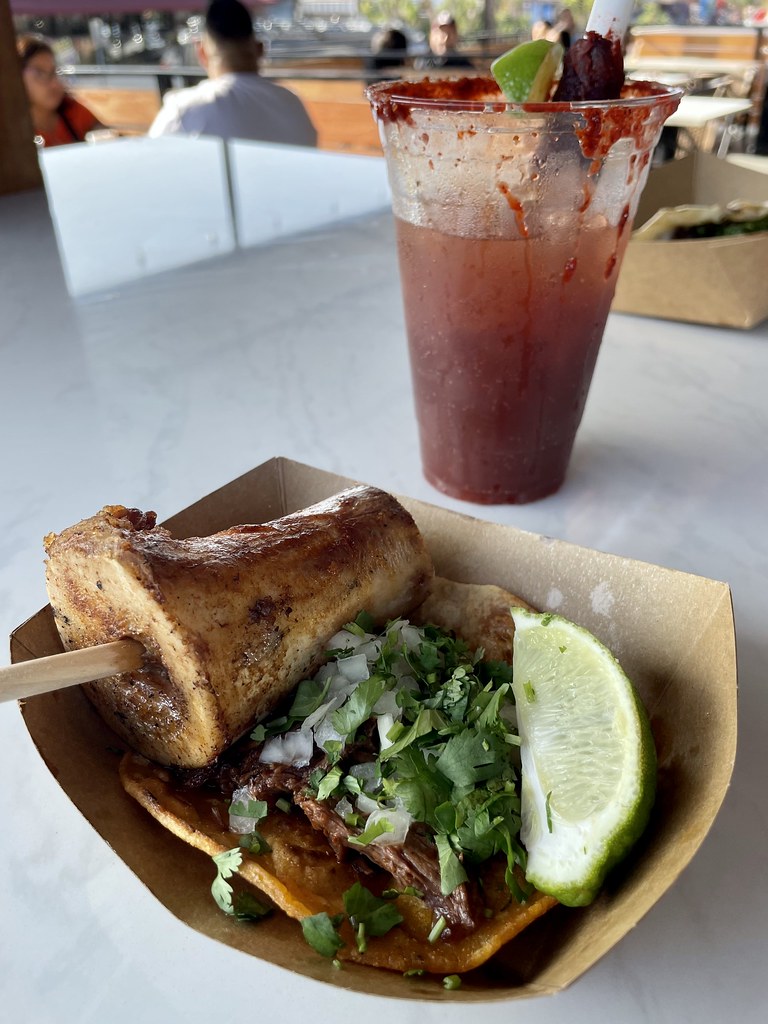 We hiked off our lunch out in Oak Canyon on a 3 ½ mile loop trail that follows a creek bed most of the way through the canyon, complete with said named Live Oak trees. 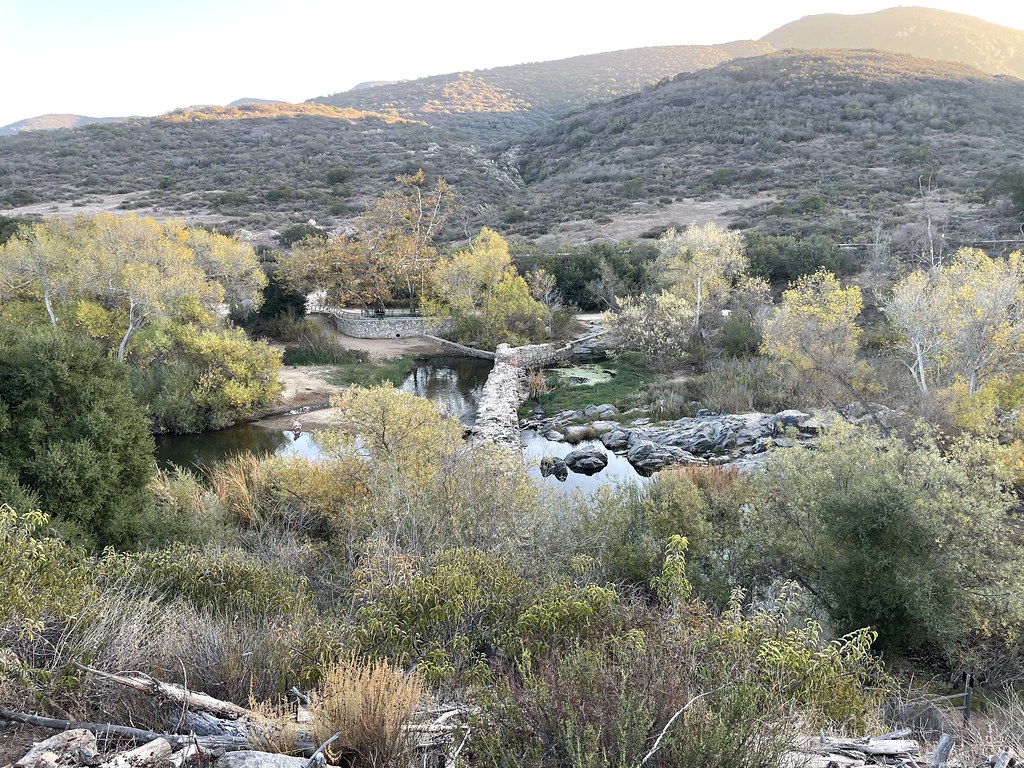 That night we met my friend Gail, who happened to be in San Diego visiting her friend Robin, for drinks at Grass Skirt. This is always a fun spot for tropical drinks and on Sunday it was surprisingly busy! 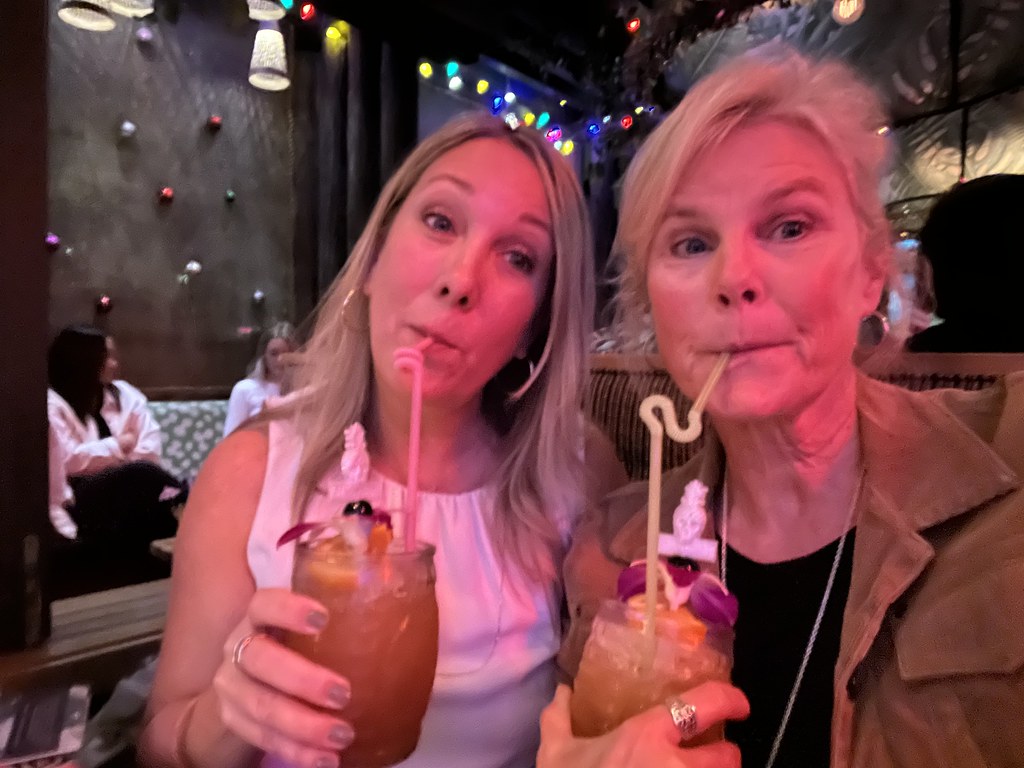 Robin has joined us in Palm Springs a few times so it was great to see her again!
Aaron and I left the girls to their own devices and headed back downtown for a final dinner at Fort Oak. Their concept is simple, most everything is grilled, and the space is super fun as the building was the old Ford dealership in the Mission Hills area. 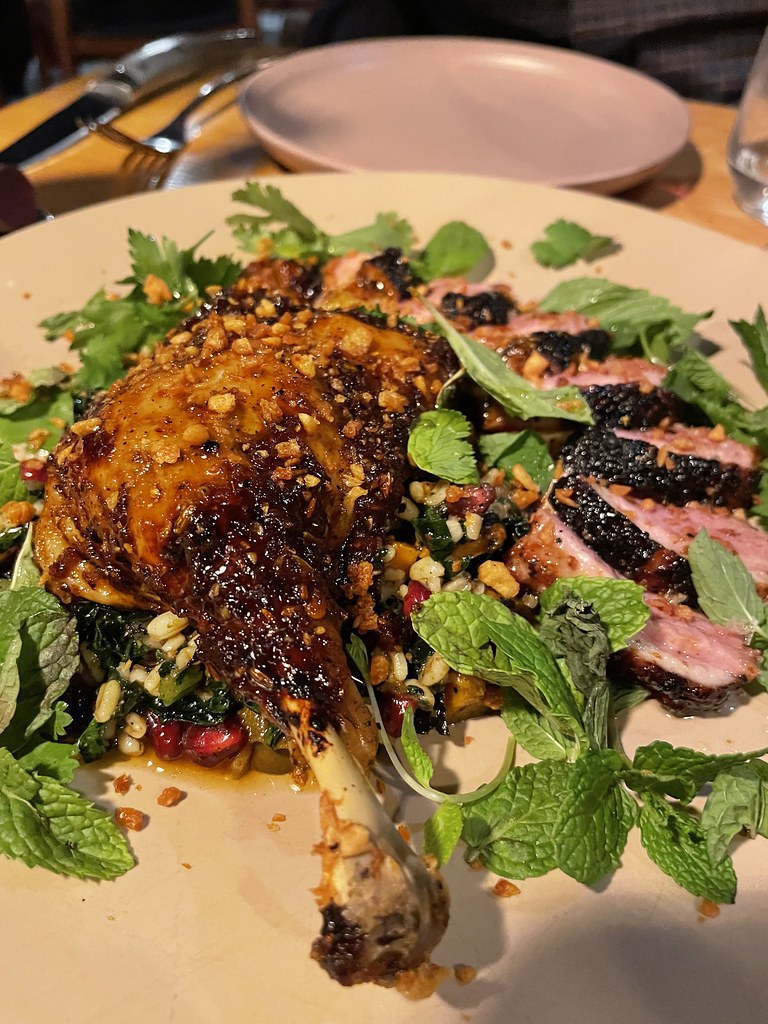 Everything was very good but we both also found everything to be really salty!
We finished with cognac and ice cream :)
Another thing that our mansion was close to was the Salk Institute, designed by Louis Kahn and a great example of brutalist architecture. Technically the Salk was closed to visitors because of Covid, but we did a quick walk around just to take a peek. 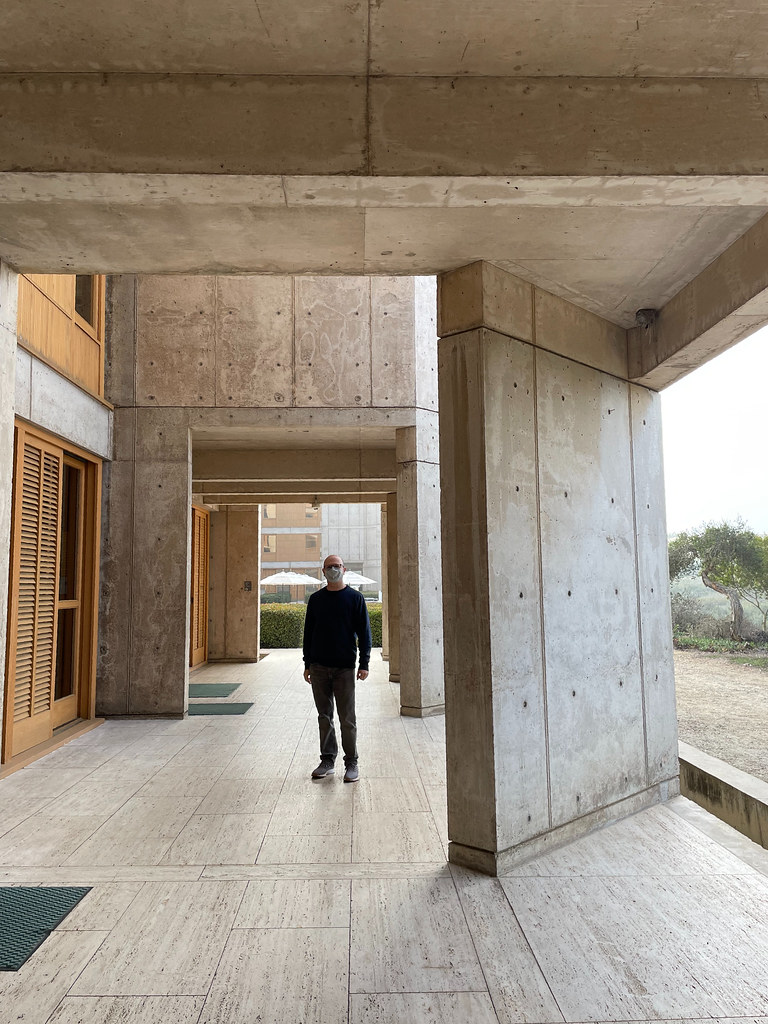 And with that, our long weekend was over. Aaron dropped me off at the airport and I had an easy flight home to Seattle. It was a super fun weekend and sooooo nice to get a bit of warm weather, sunshine, and the company of a good friend!
All San Diego photos here.
at June 25, 2022