I remember getting a postcard from my friend Forest in the early aughts from Mont Saint-Michel, the photo was of the tide out and people walking on the tidal flats out to the island. I didn't know anything about this place but she wrote on the back about how you had to time your leave or you'd be stuck! I'd wanted to go ever since.

I was so excited for this last stop on our trip! Not only would we be visiting but we were spending the night on the rock! 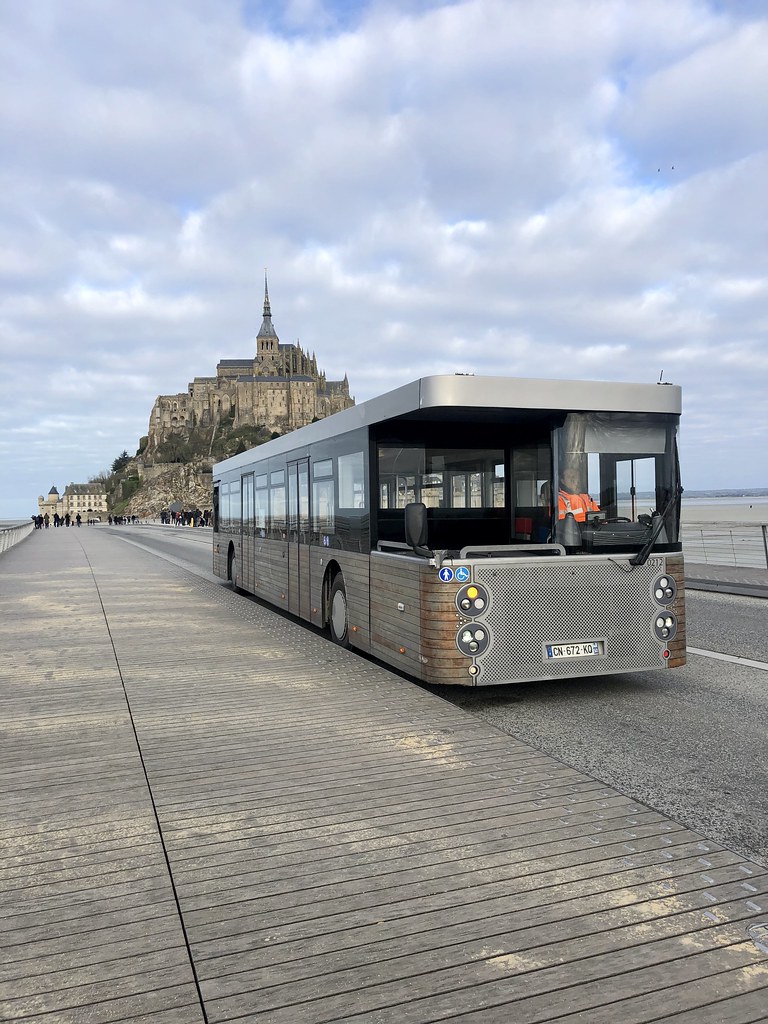 We had an easy 1-hour drive from Saint Malo to the overnight parking lot that our hotel had directed us to. From here we would board a bus (or you can take a horse and buggy) that would take us out to a paved bridge; but there would still be a 1/4 of a mile walk to the actual island and then up through tiny cobblestoned lanes to the hotel. For this reason we decided to leave our suitcases in the car and bring only an overnight bag. I was so glad that we did this!

Our hotel, the Auberge Saint Pierre, wasn't too far from the main gates of the village. Forest and Thibault had a room in the main inn, while I had chosen to stay in one of the 13 Chapeau Blanc "logis", which are former fishermen's houses, all with views of the bay. As one of the hotel employees led me up to the logis I realized that the reason they all have views is that they are pretty much at the top of the hill! 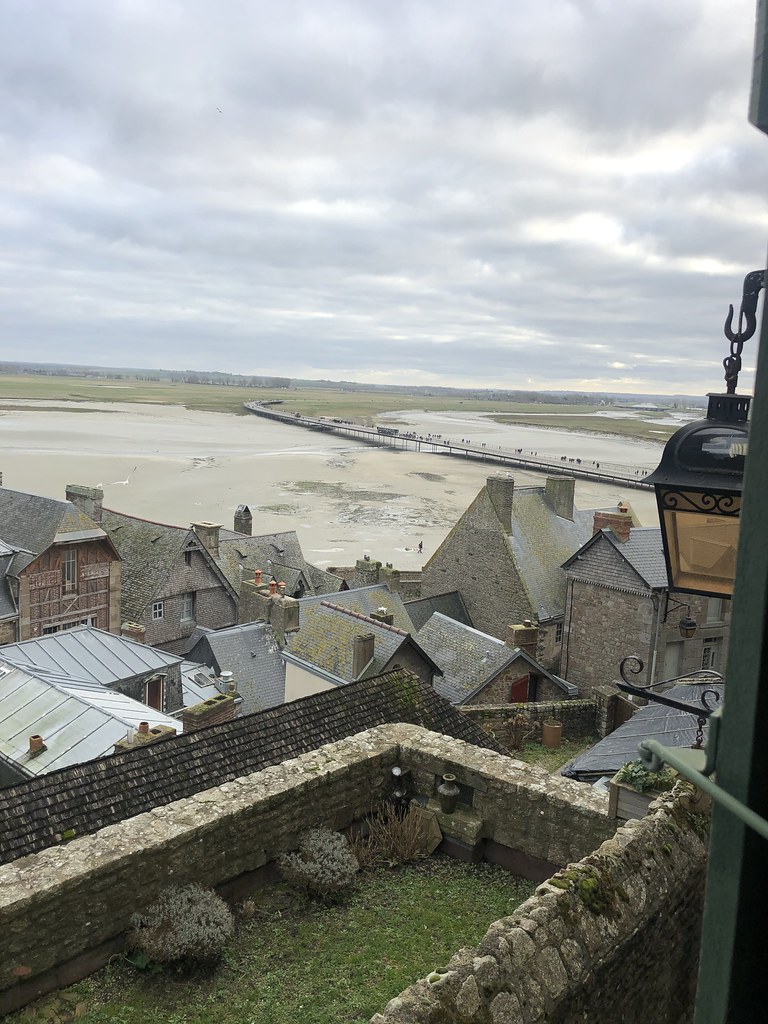 Lots of steps! And lots of twists and turns! I wasn't sure how I was going to find my way back down in the daylight, never mind at night! Cars are not allowed on the island so be prepared for some steep climbs.
It had been a long time since breakfast and we were all very hungry so we met in the hotel's restaurant for a lunch of the famous souffléed omelet that the island is known for. The restaurant La Mère Poularde has been making these omelets since 1888, and over there the going price is about $40. For an omelette. 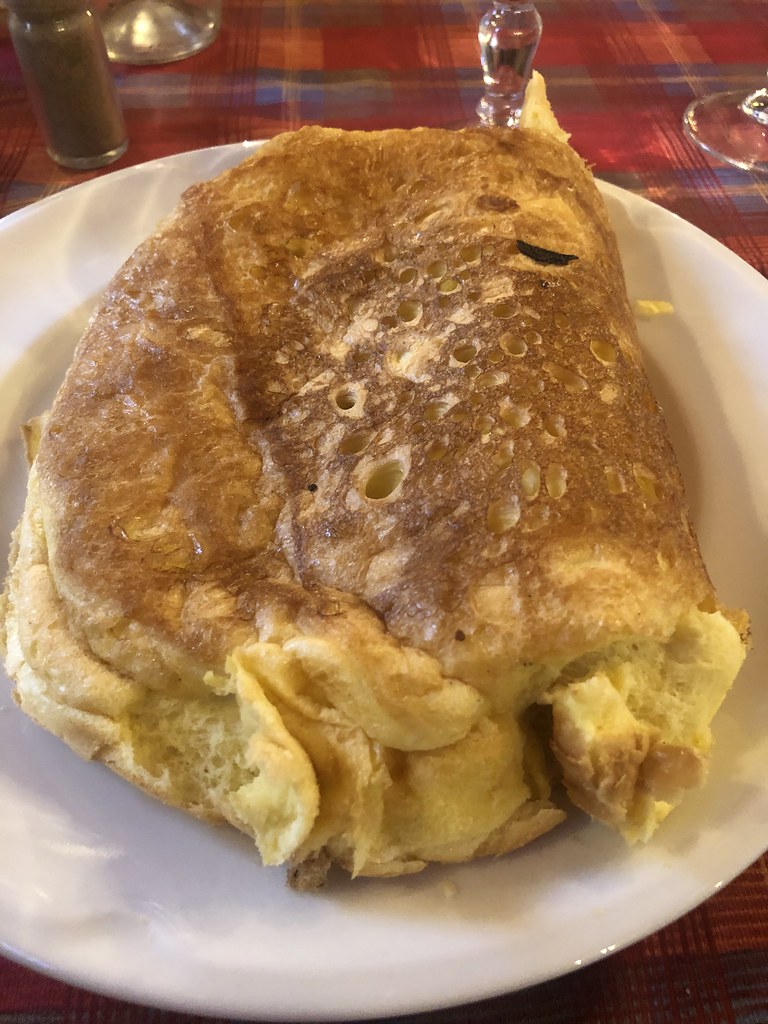 I can't remember what the price was at our hotel restaurant, probably $25? Still more than it should be but paired with a nice glass of white wine it made for a lovely lunch.
We spent the rest of the afternoon walking all the way around the village walls. It’s truly fairytale- like! Narrow little lanes winding up and up, past stone houses, most over 200 years old! And the Abbey looking like a cake topper. 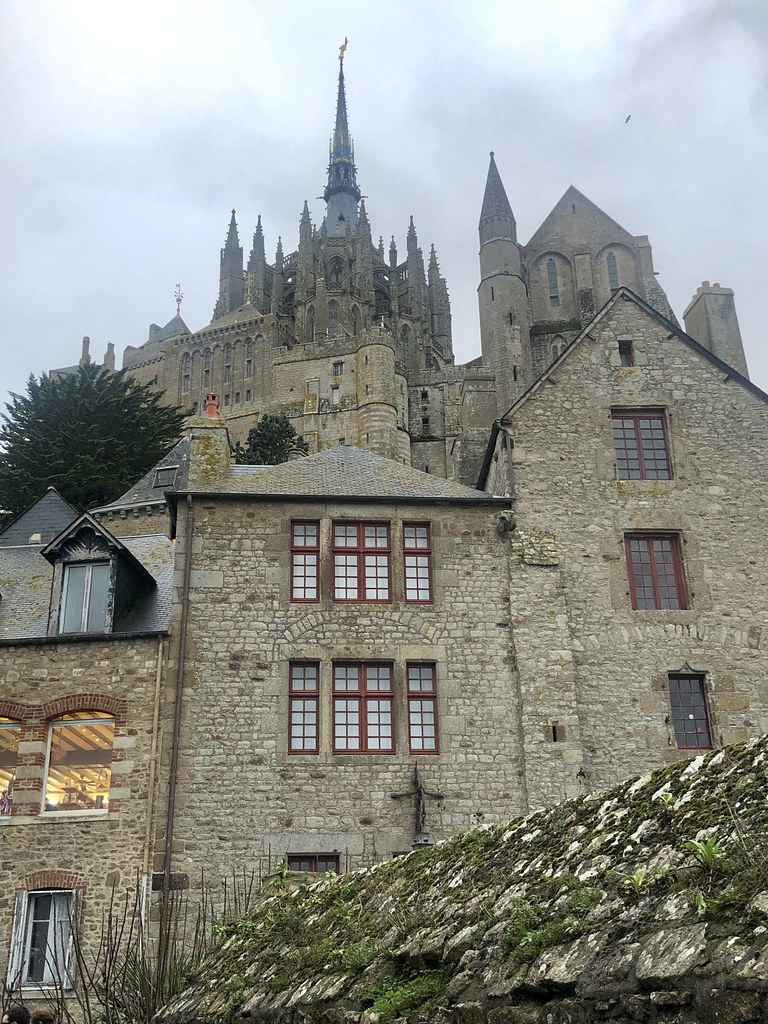 The only time the island is actually an island is at very high tide, generally this is after a full moon. Throughout the day the bay definitely changes but we never did see it high. 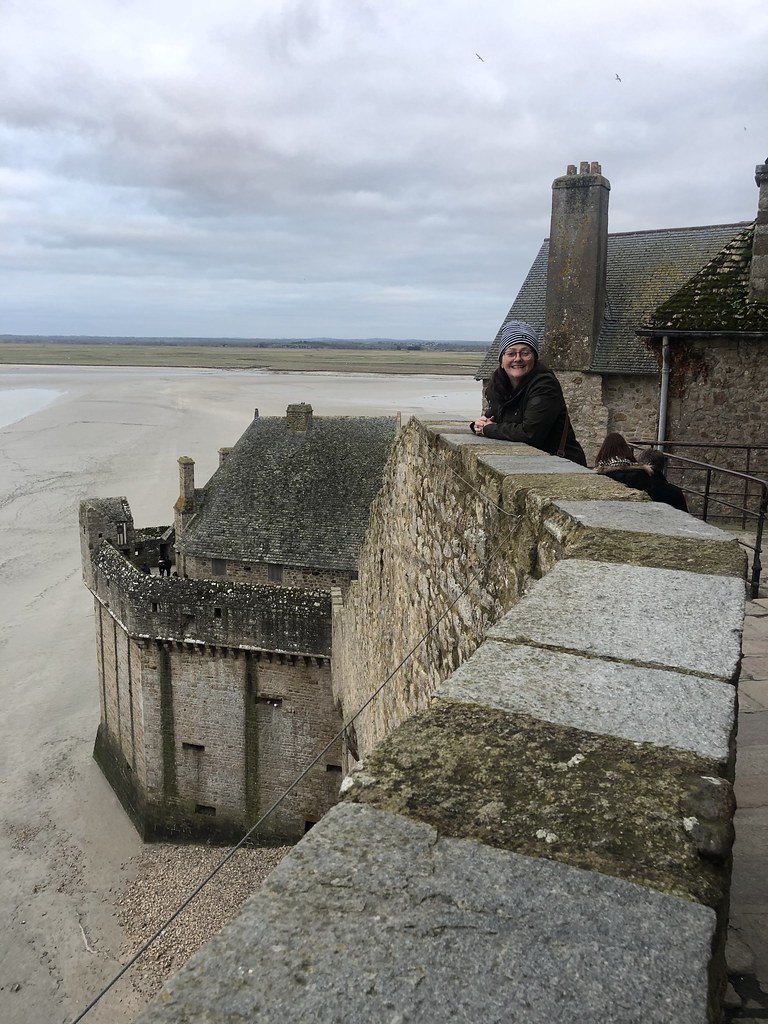 The number of people thinned out drastically as the afternoon turned to evening. When we entered the Saint-Pierre church with its statue of Joan of Arc outside, we were the only ones there . 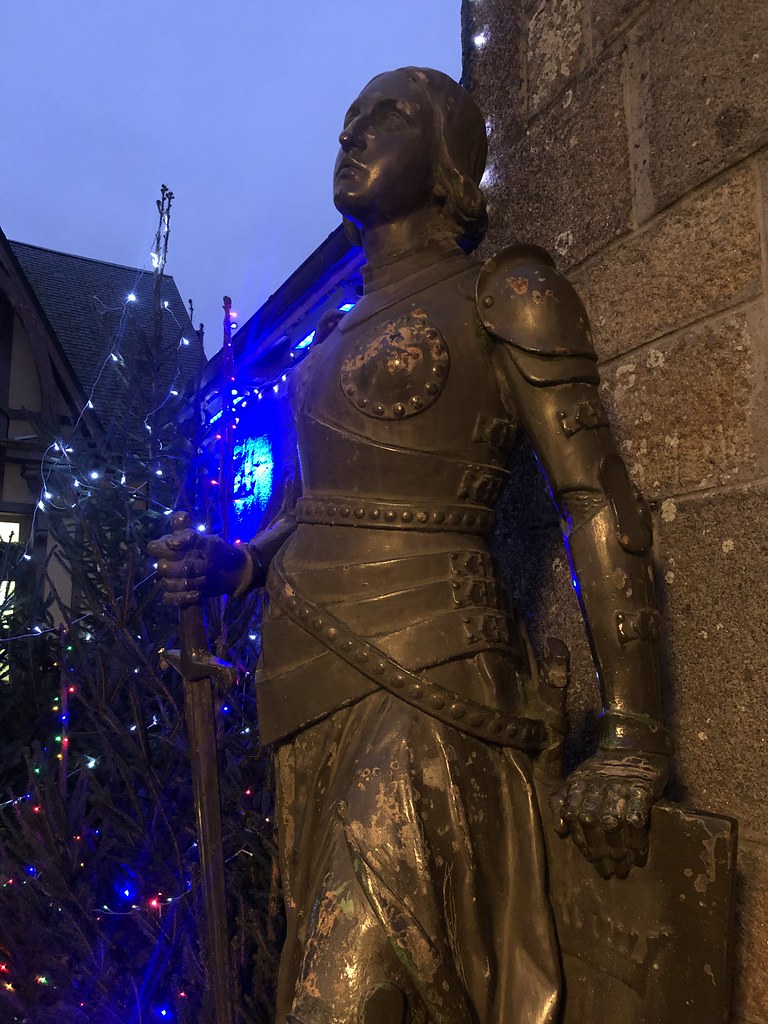 We had drinks at our hotel bar before dinner, which was cozy with Christmas decorations still up and a fire going, and were just three of a few. There weren't a lot of options for dinner so we chose Les Terrasses de la Baie since we had already had a meal at our hotel. It was very much what you would get at a cafeteria, nothing to write home about. It was very quiet when I made my way back up to my room. 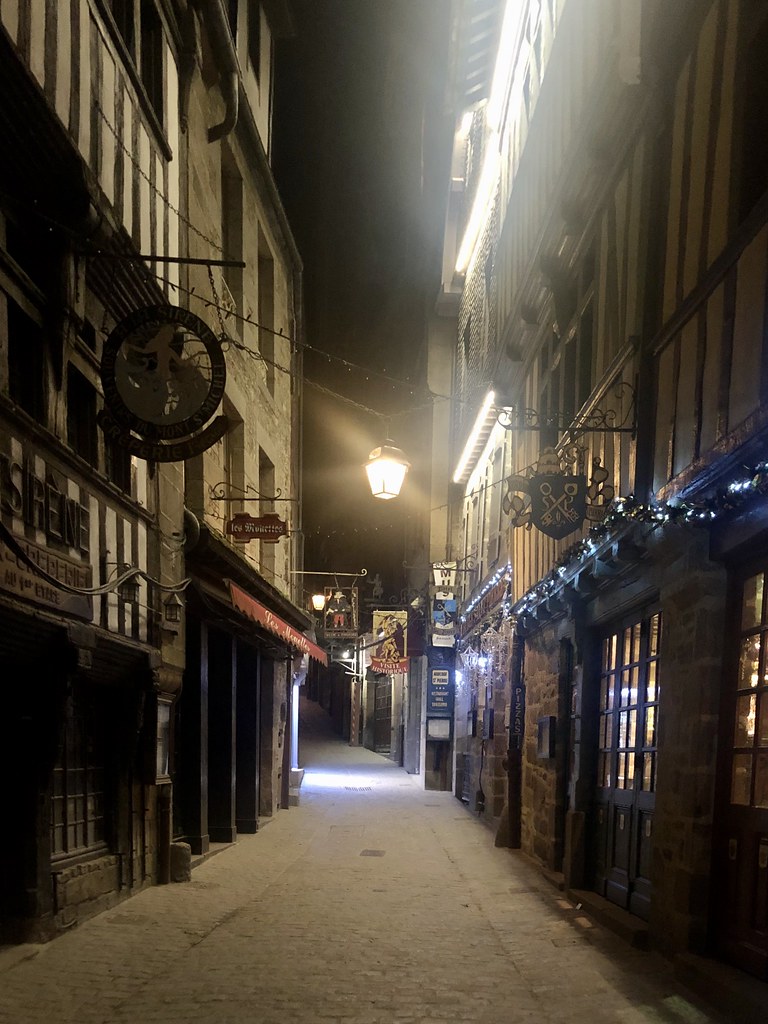 The next morning I walked up the many steps again to the top of the village. I didn't pass anyone! 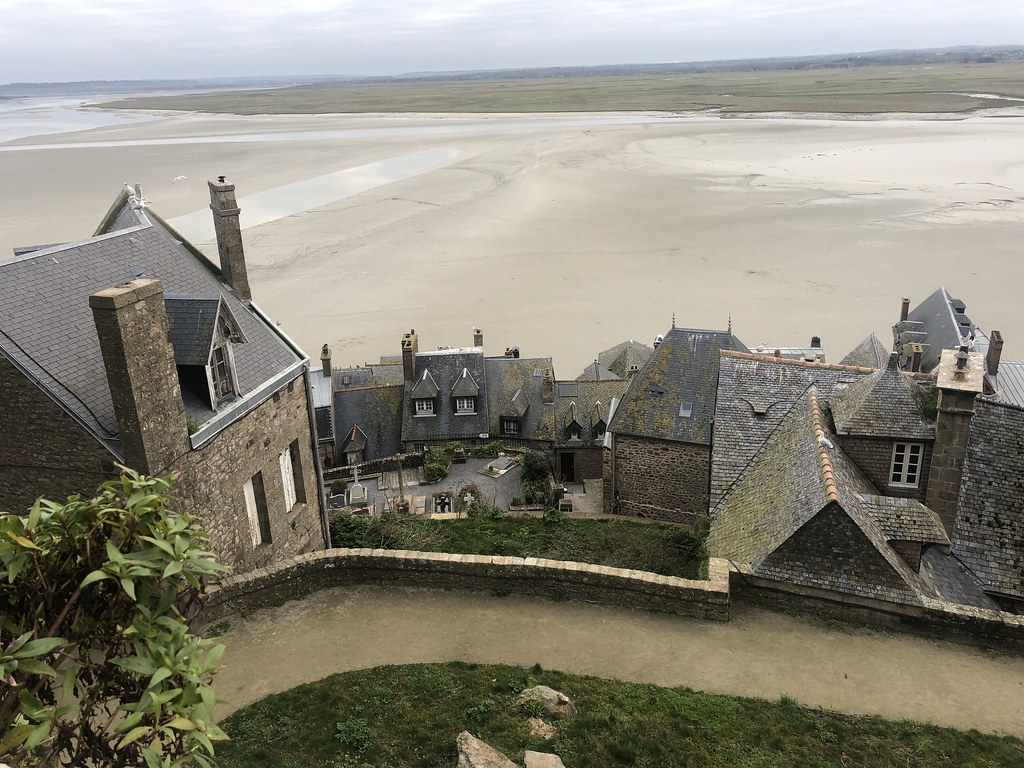 I was meeting Thibault at the Abbey, it was the first Sunday in January and so entrance was free. Once at the top there are 350 steps that lead up to the Abbey entrance. 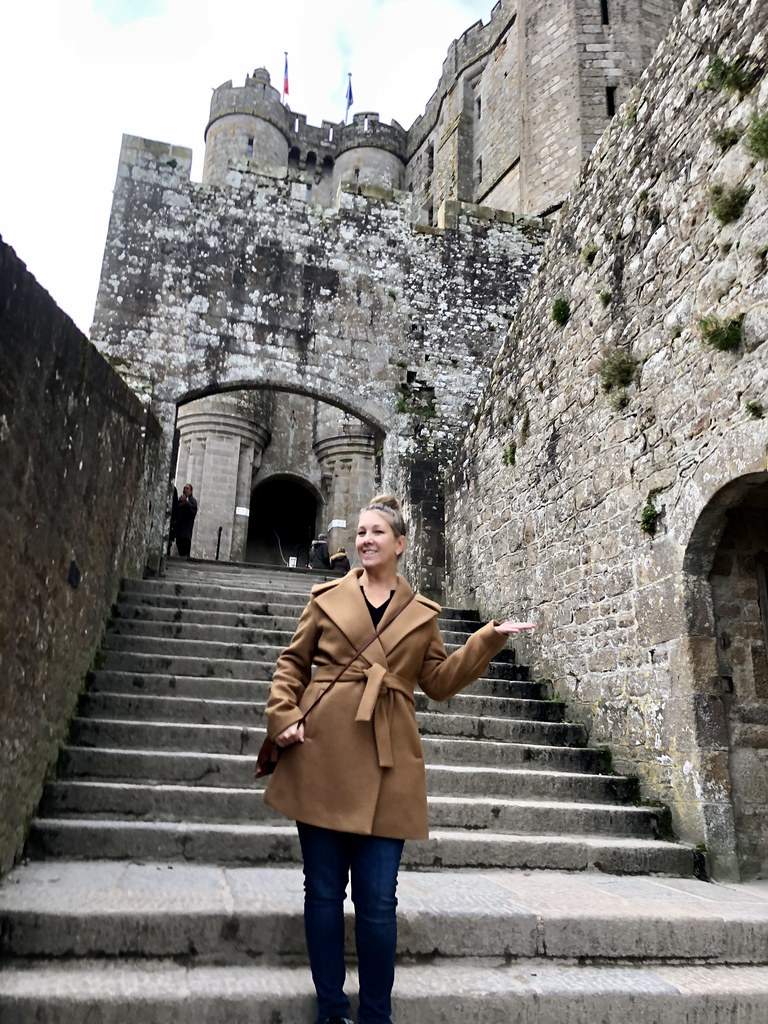 Being there right when they opened was wonderful. The tourist hadn't yet made it onto the island yet so there were only a few other people inside.
Exploring the Abbey like that, having it almost to ourselves, was such a unique experience. And it's absolutely beautiful. There were also a few rooms which held crypts that were a bit creepy with no one else around! 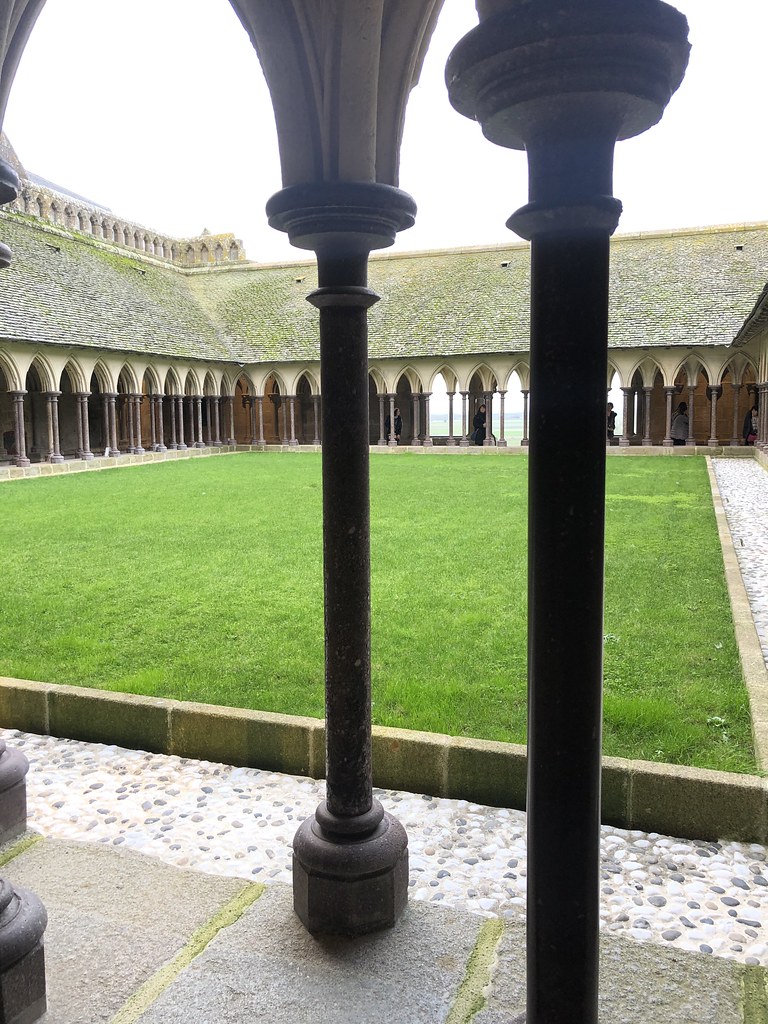 I walked thru the chapel and around the cloister, appreciating all the detail of the carvings. This church opened in 1523! It's just incredible how well preserved everything is. 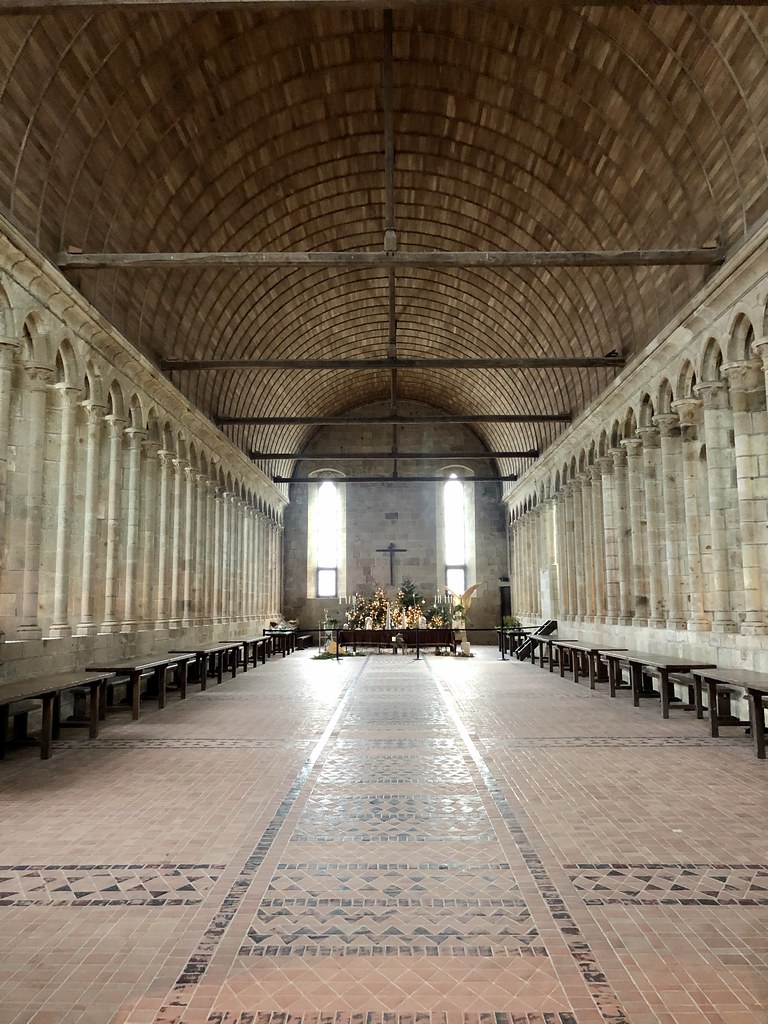 When it first opened there were just convent rooms, a Host room, the refectory, the knights room and the cloister. After the Benedictines were driven out in 1791 the French Revolution started and the church was a prison to around 300 priests who opposed the regime. 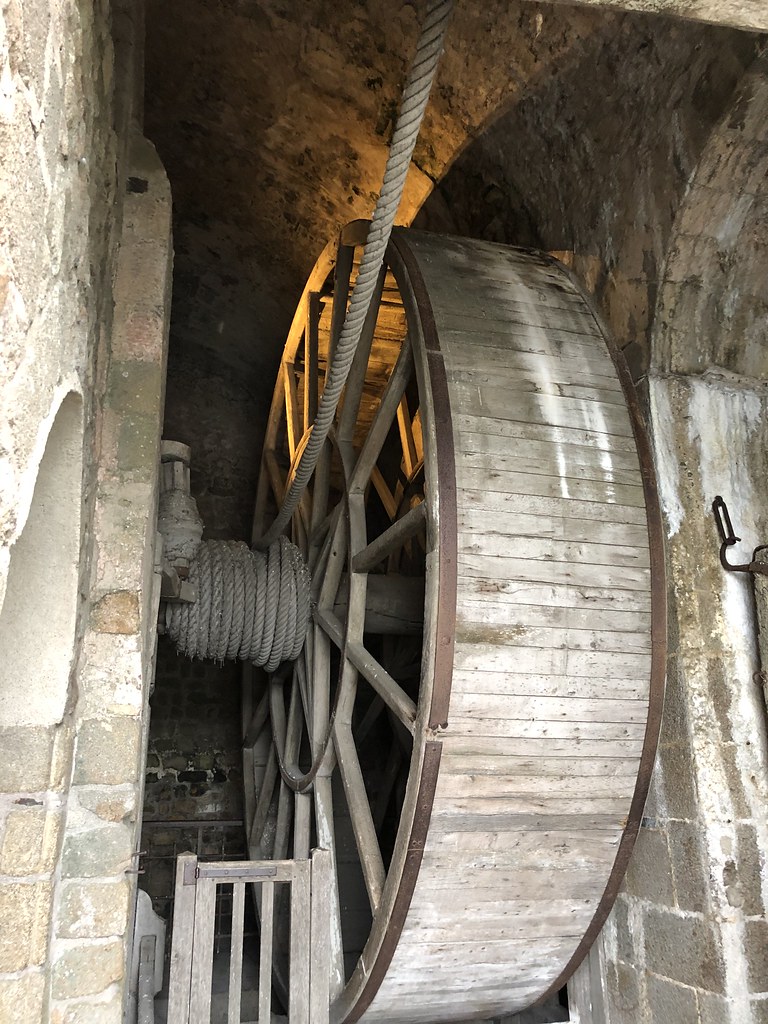 This huge treadmill was operated by the prisoners to bring up supplies. It's over 14 feet across and could haul up 3 tons of supplies and equipment!
Napoleon III closed the prison in 1863 due to poor conditions of the buildings and in 1874 it was made a historic monument. Preservation is an ongoing thing here to battle the salt air, wet conditions, and of course age. In 1922 worship resumed. 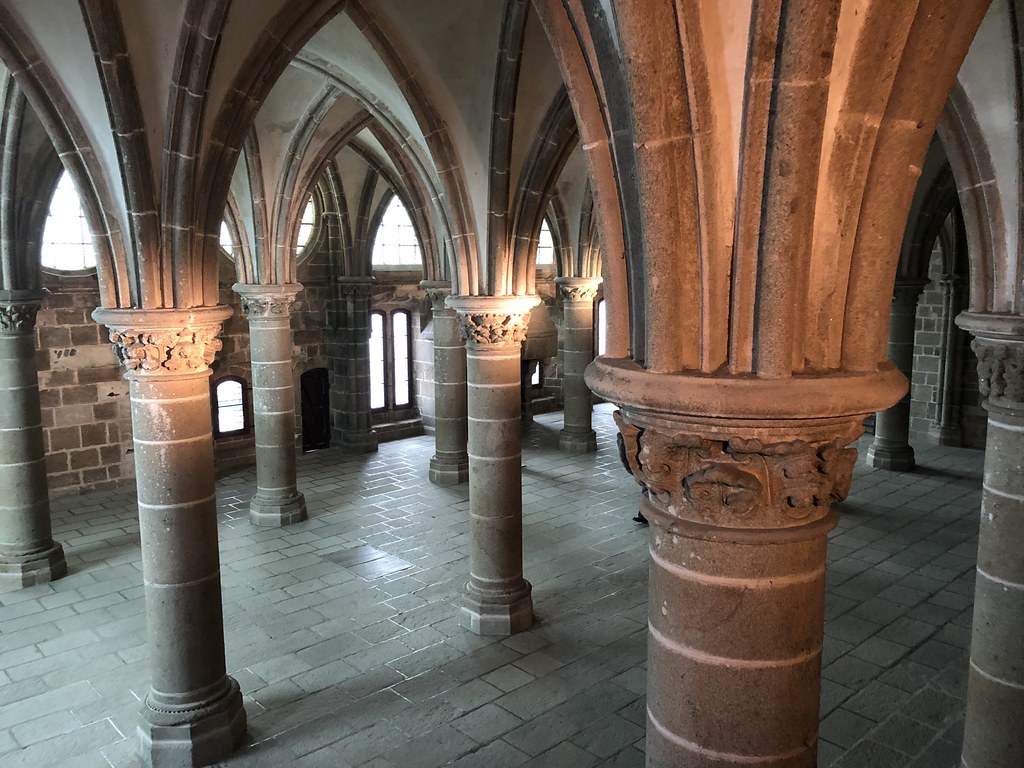 We walked around the outside a bit and spotted the tiny Chapelle Saint-Aubert on the banks of the bay below. 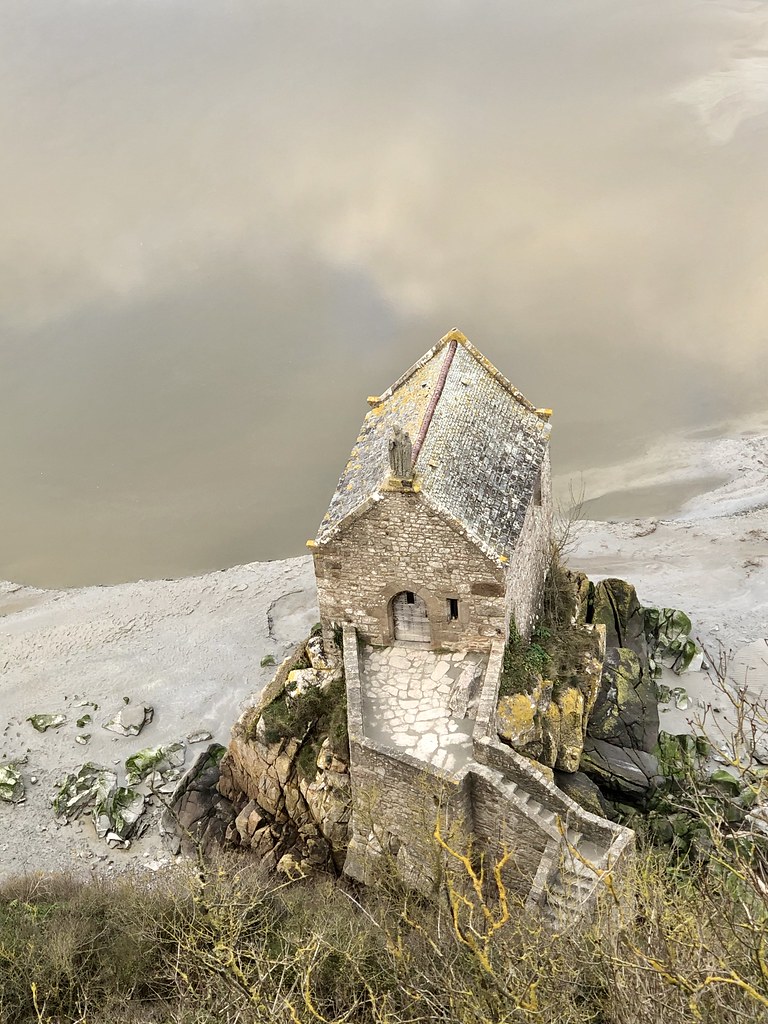 With over 2 ½ million visitors per year, this tiny village can be a madhouse during the day. Even in the winter it was very busy. But at night, with only ~50 full time residents it is incredibly peaceful. Yes, everything is overpriced but it's really a special experience. I'd highly recommend an overnight if you can. 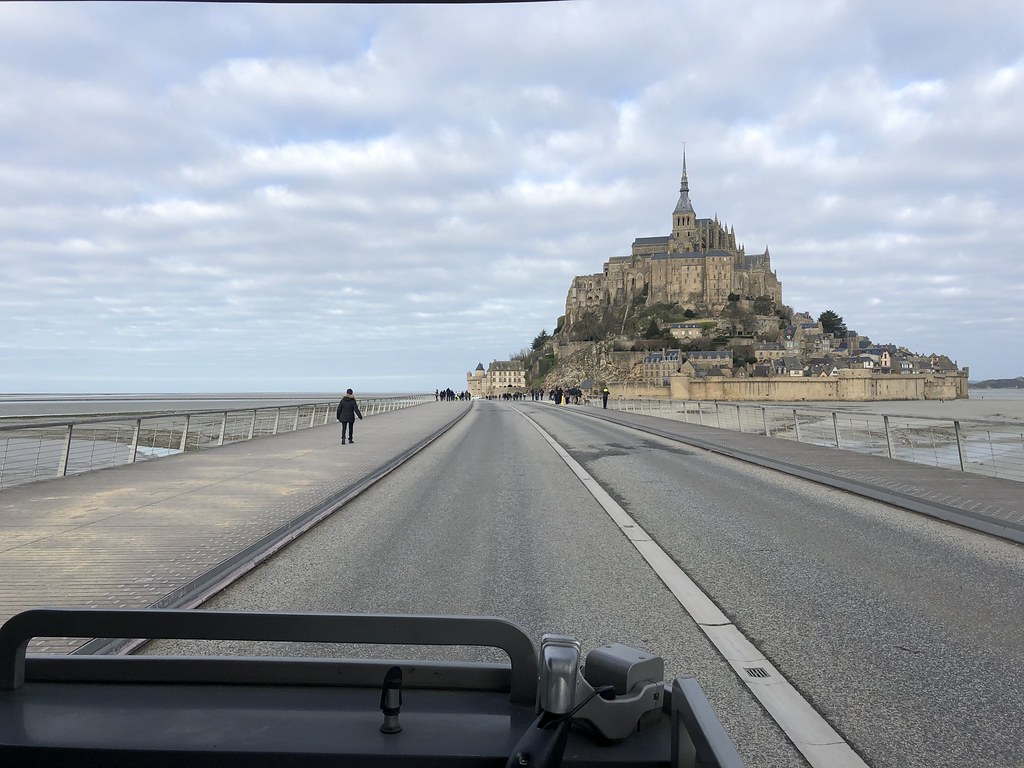 We met back up with Forest, checked out of the hotel. and walked out to the bridge to catch the bus, specifically sitting in the back to catch a few last shots of the majestic stone village. 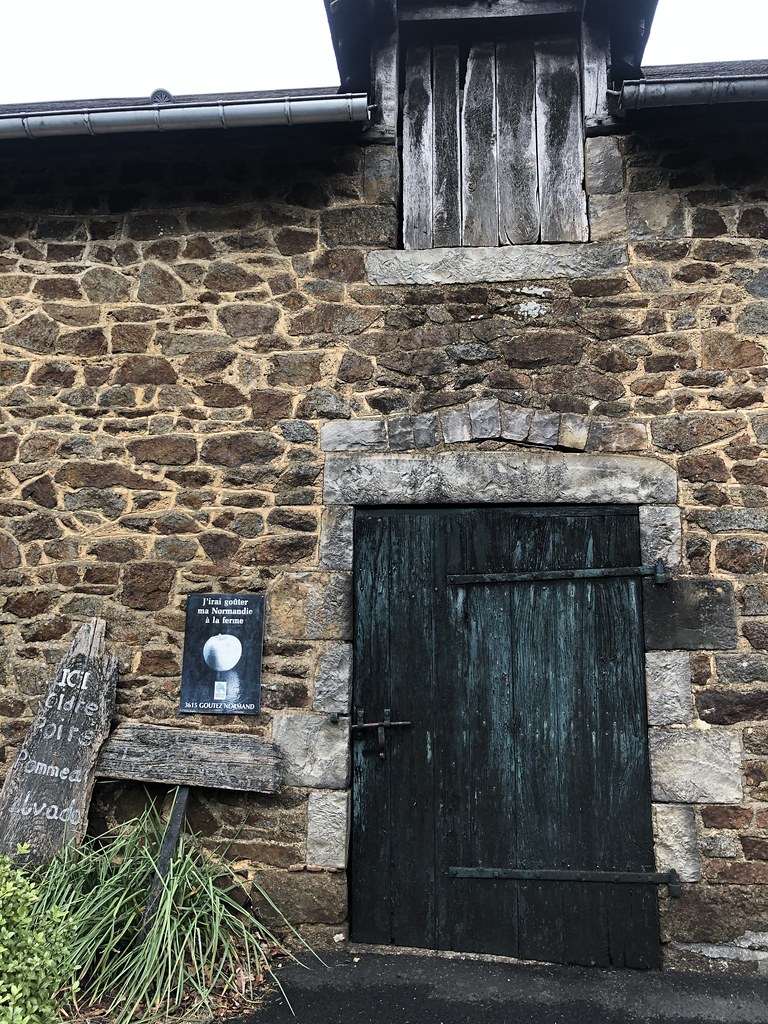 Our Normandy road trip was over and we were headed back to the country house in Le Perche. Along the way was the LeMorton Calvados Distillery which just happened to be open on Sunday. We stopped for a few tastes and left with a few bottles! 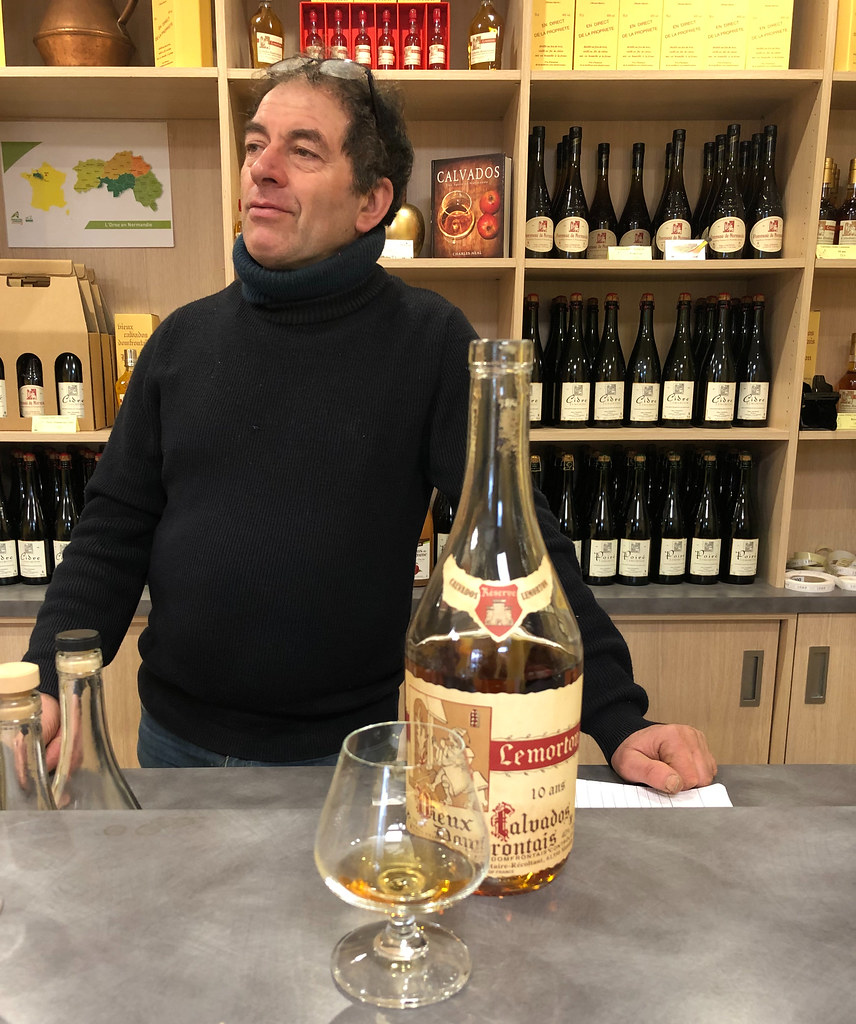 LeMorton is in the Domfrontais region of Calvados. This far southern area uses a blend of apples and up to 70% pears in their Calvados. I'd never had it before and loved learning about this on a little tour around the distillery with Madame Martine. Later Didier, whose Grandfather had started the business in the early 1970's, continued to discuss the unique blends as he poured for us in the tasting room. 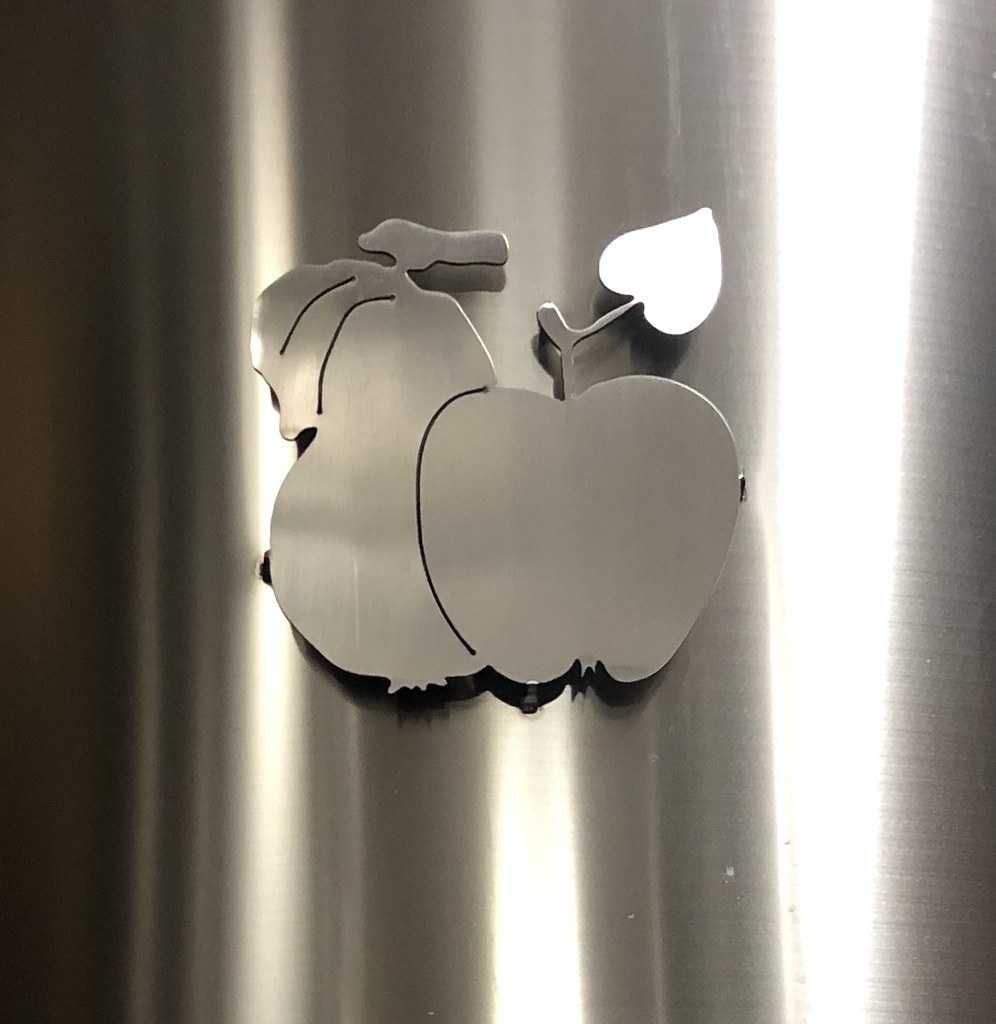 I didn't have quite enough cash on me for the bottles I wanted and they didn't take cards. Luckily Thibault had a checkbook in the car and they were very happy to accept that! So quaint!
The owners sent us on our way with a lunch recommendation at a grill just down the road a bit. I had some delicious grilled lamb and french fries and then we made our way back home. It had been an absolutely fantastic road trip around Normandy!
All photos of Mont Saint-Michel here.