We had chosen Caen as our home base in order to explore the D-Day Beaches of Normandy, but we didn't leave ourselves any time to check out the city itself. All I can say about Caen is that we stayed in this Airbnb that was clean, bright, affordable, and comfortable for our 2-night stay. The building had private parking and was very secure. The only downside was that it wasn't in a very walkable area of town.

The Memorial de Caen is both a memorial and museum dedicated to WWII. It sits on the remains of the command post of the 716th German infantry division just on the outskirts of town. We spent a couple of hours walking through the exhibits which focus a lot on both the civilians as well as the military battles. There are a lot of artifacts, photos, personal items, and film clips. It was heavy but well worth the stop. 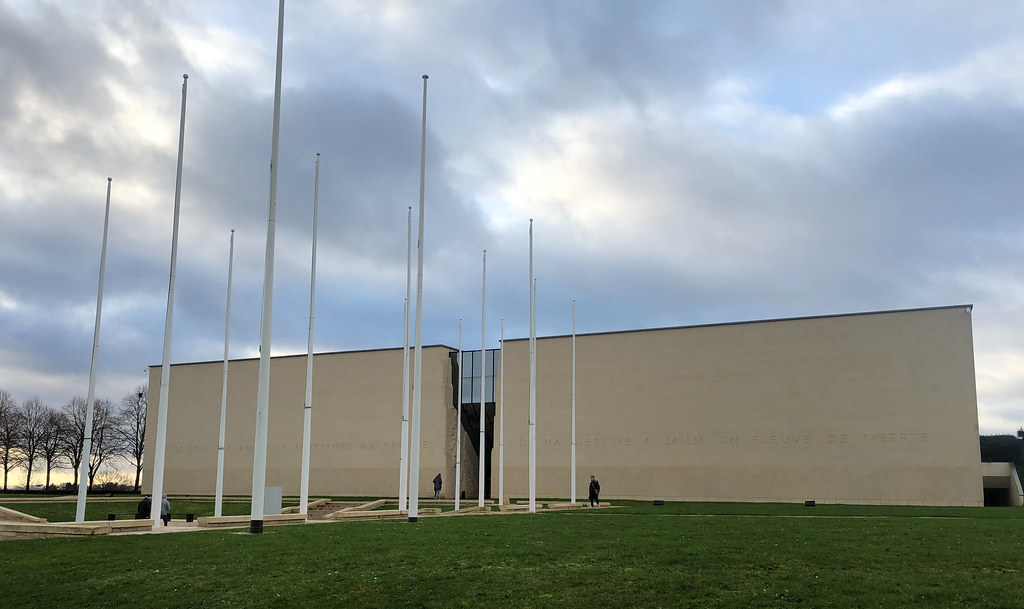 The evening before, after a day of touring the beaches, we stopped in the quaint town of Bayeux which is just 30 minutes west of Caen. We arrived in time to queue up for the Musilumière, the light show on the Cathédrale Notre-Dame. What I didn't realize until we were in line was that this light show was actually done inside the Cathedral. Very nice as it was winter! 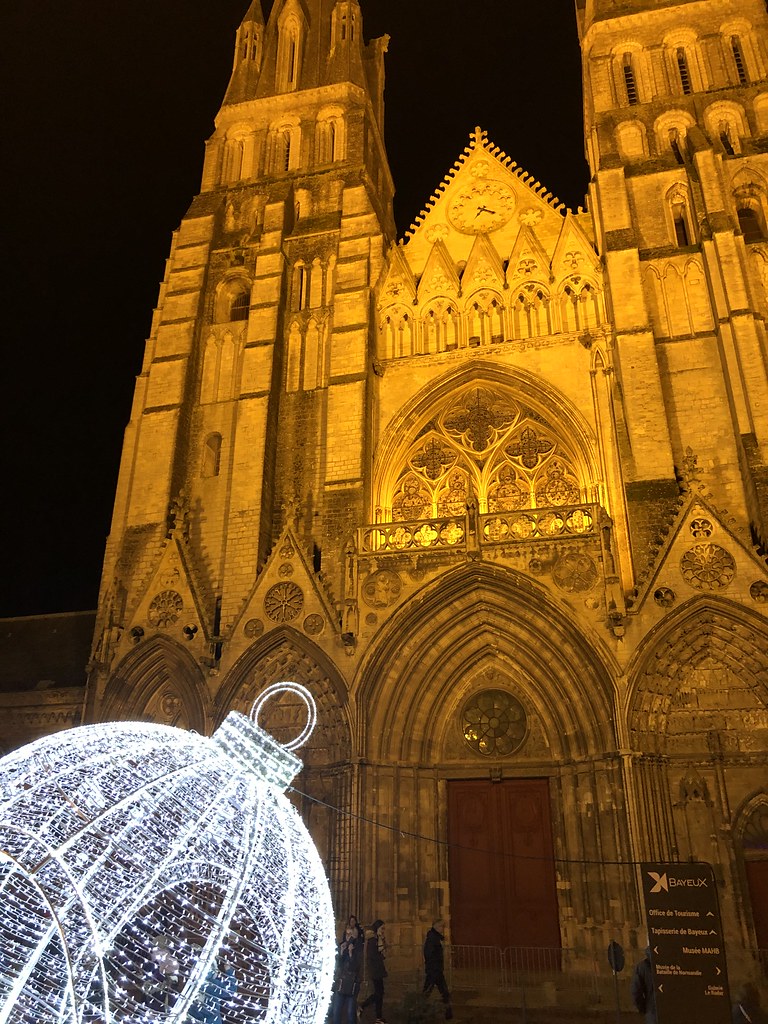 The church is famous in the area for its 223 foot Tapisserie de Bayeux, an 11th-century tapestry depicting the 1066 Norman invasion of England. The light show was an explanation of the scenes on the tapestry! It was incredible, and luckily I had Thibault to translate some of the information since I don't speak French. 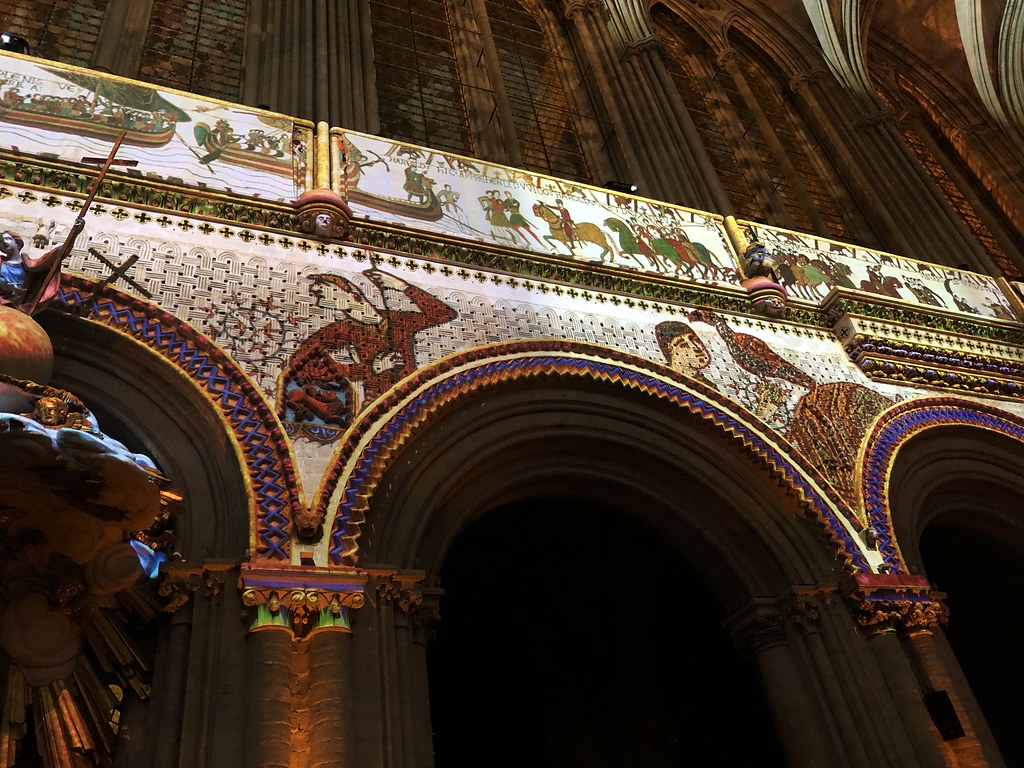 It was really beautiful and such a cool little gem of history to learn about. The cathedral is known to have a lightshow on the exterior in the summer months. The town is really charming with cobblestone streets and half-timbered buildings (like all of Normandy!), I think it's a great stop while in this area.

After the show we chose Restaurant L'Assiette Normande based on its location across from the church and the fact that we were starving. A kir Normande (sparkling cider, Calvados, and crème de cassis), steak au poivre, and Normandy apple tart were all perfectly good and typical cafe fare. 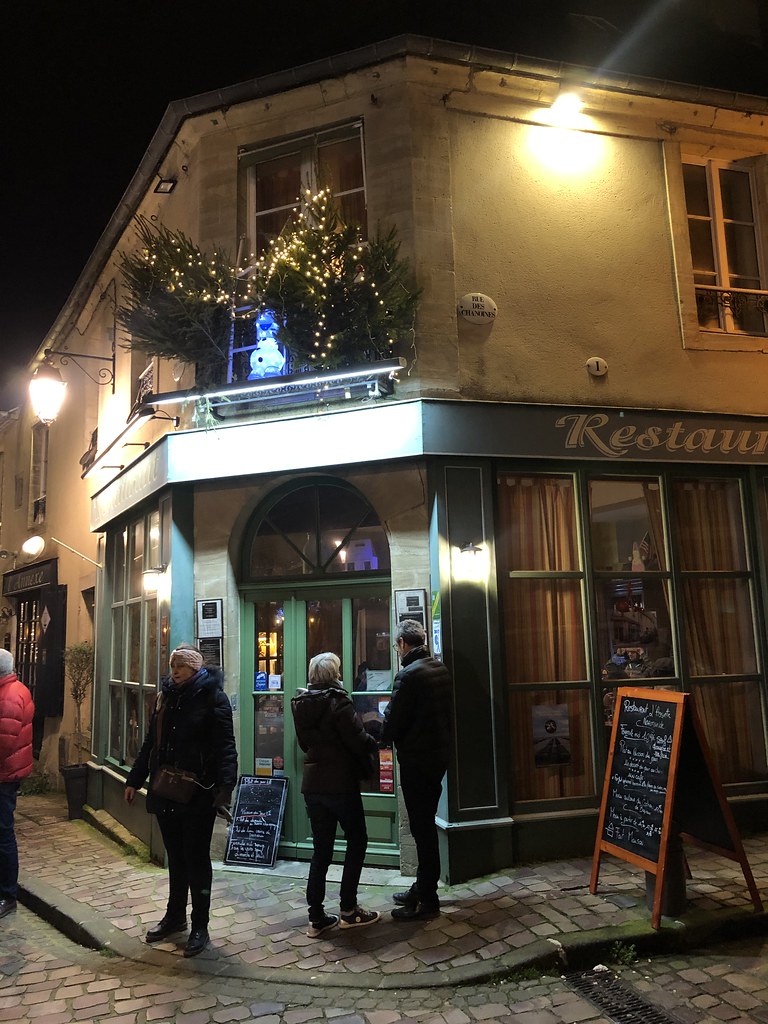 Our next stop on our road trip was Saint-Malo which I had first heard about while reading All the Light We Cannot See". If you haven't read this, it would be a great book to bring on a Normandy trip! 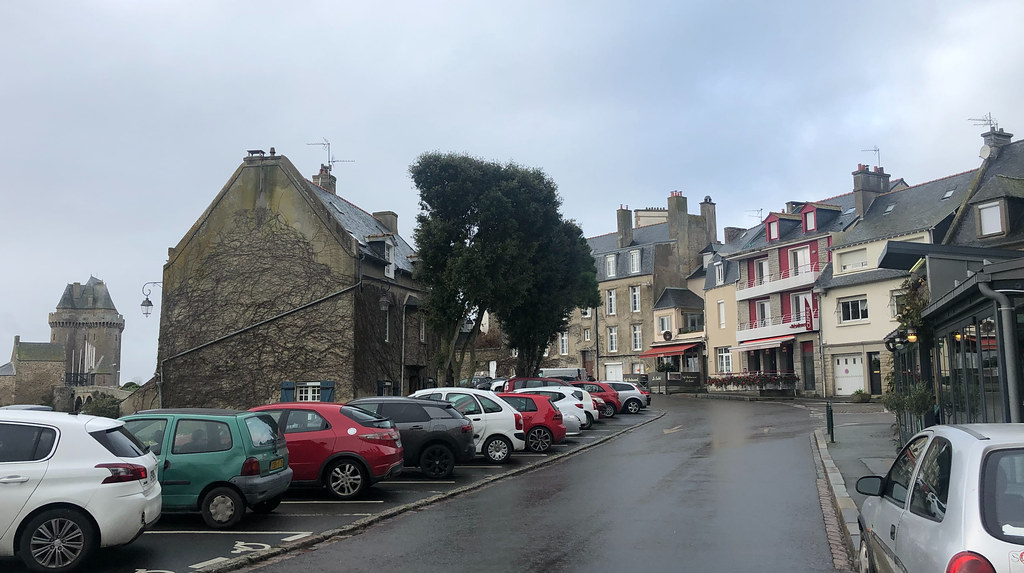 The 2 hour drive from Caen had us arriving in time for lunch; this was our one and only stop in Brittany and I was thrilled to be here! We parked at the La Cité area, just across from the walled-island town, and had lunch as the super cute Le Bulot.

The specialty of the house here (besides bulot or whelks) is brandade de morue (cod brandade) which is served hot and bubbly in individual terrines. Absolutely delicious! 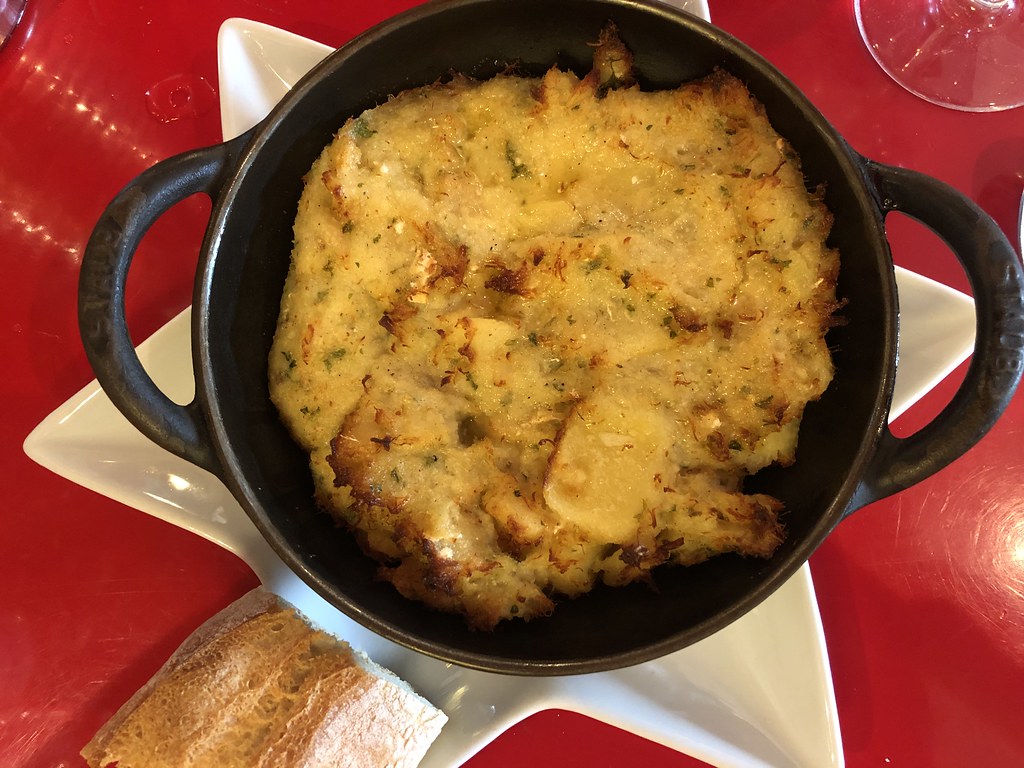 We had a little walk around this area after lunch and then drove over the short bridge to the island city.

Public parking is just outside the main gates/walls of the old city. It was a short walk from the car to Hotel des Abers where I was staying. Thibault and Forest had a cool very old Airbnb just 6 doors down. 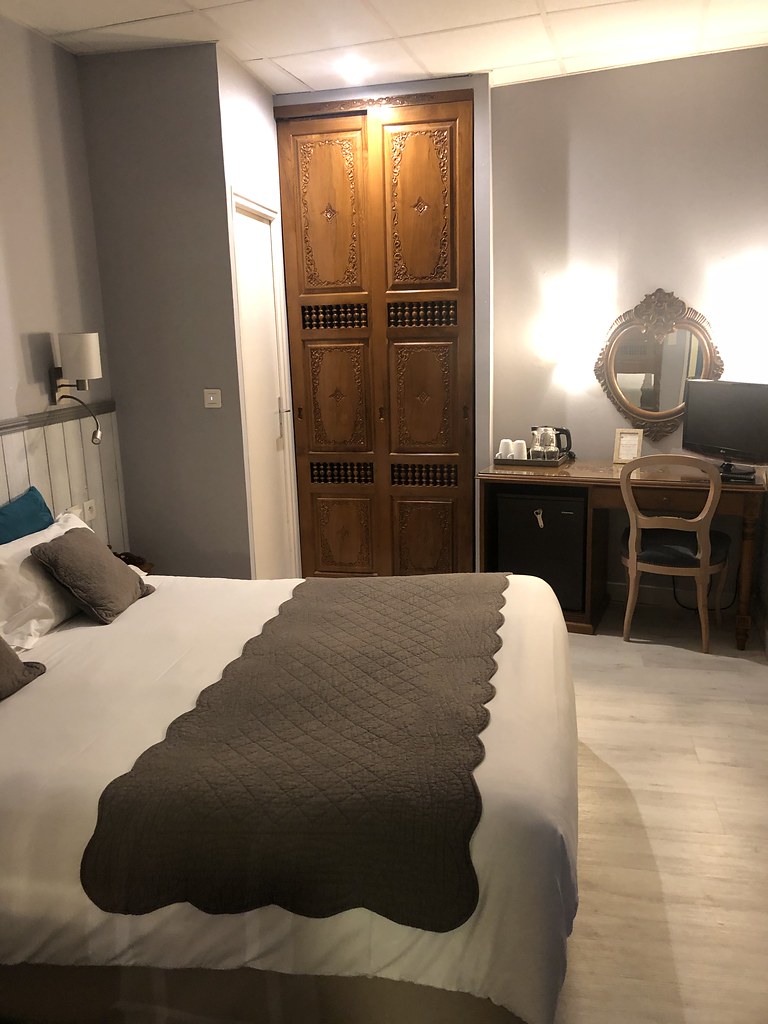 We spent the rest of the day exploring La Cité Corsaire as it is known from it's history of being a base for pirates employed by the King. Since we had a bit of drizzle we decided to save a full rampart walk until the next day and instead checked out the cathedral and did some window shopping. It's a really cute city and the bakeries fill the streets with the incredible smell of kouign amann and sables made from the famous butter from the region. 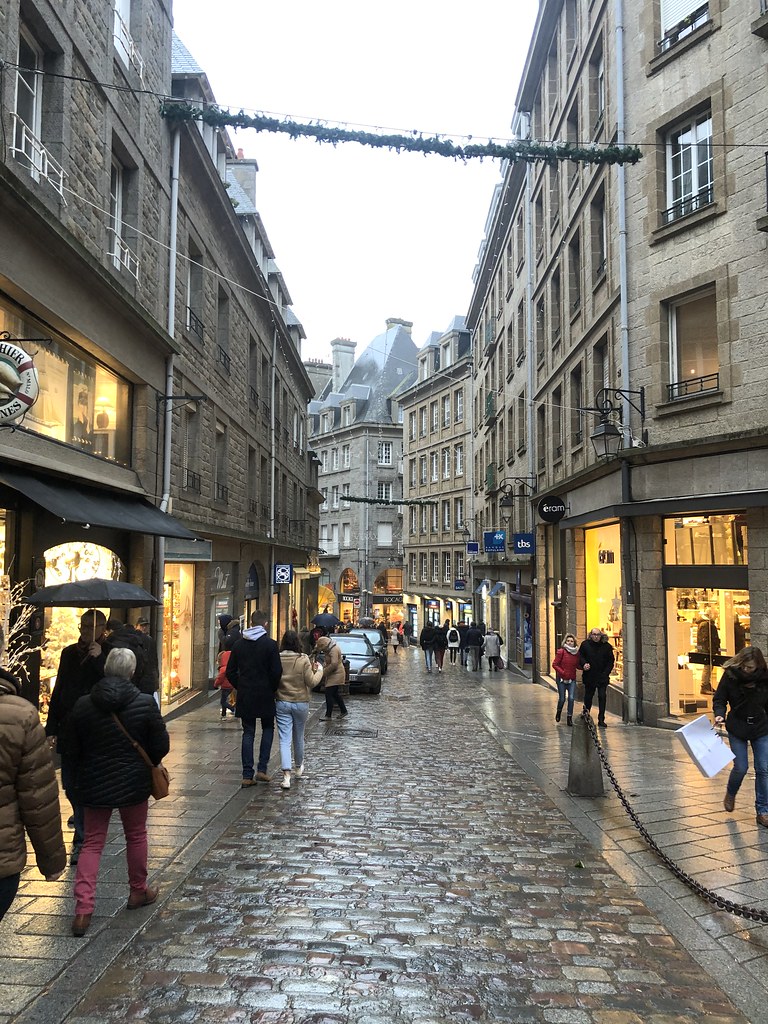 While walking around I noticed that the town has a symbol with a cape wearing weasel on it! I have no info on this super weasel but it was one more reason to like the town! 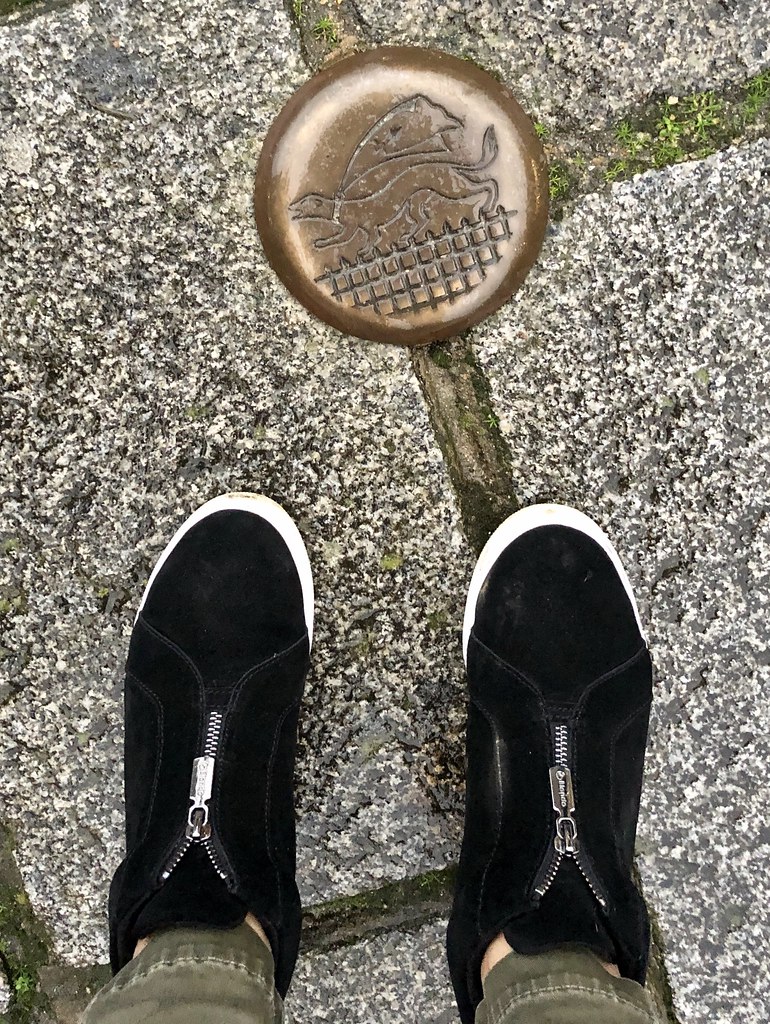 That evening we had cocktails at La Fabrique bar, a really cute 2-story spot which also had a pretty impressive beer selection. Our drinks were lovely and I'd absolutely recommend a stop here. 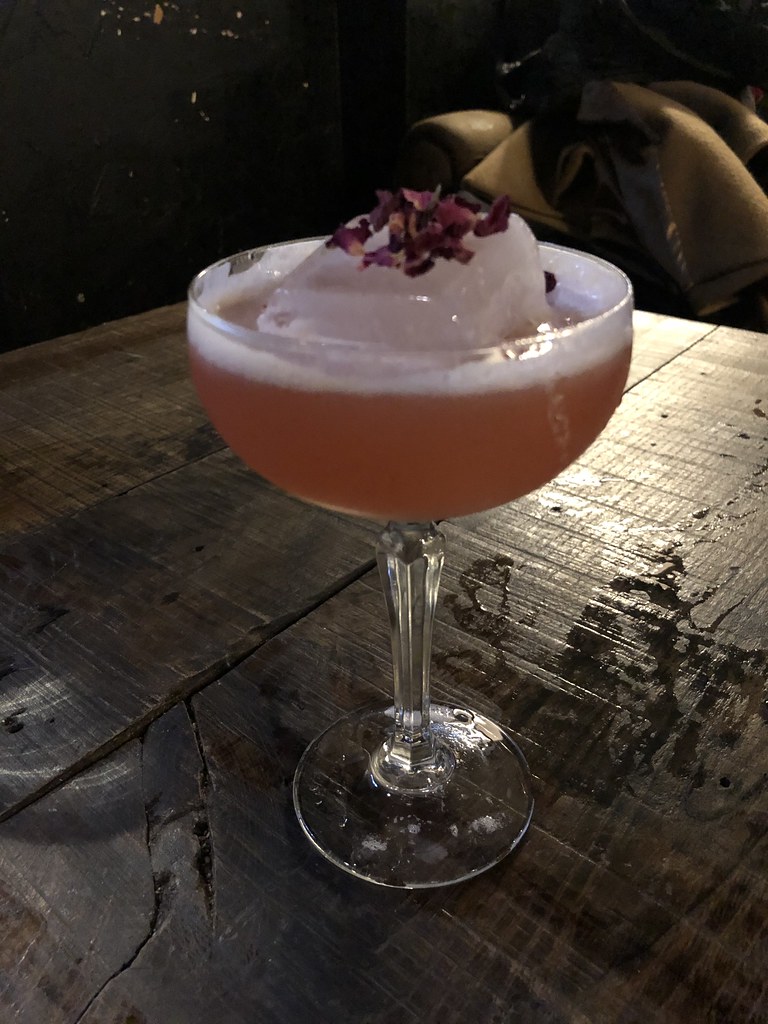 We had decided on Breizh Cafe for dinner, but there was a bit of a wait so we had a round across the way at Le Galion. Very funny divey bar filled with antiques and more than a few locals.
Breizh, which is the Breton word for Brittany, serves crepes and galettes with a Japanese twist. My traditional ham, cheese, and egg galette came with Bourdier seaweed butter and was delish! 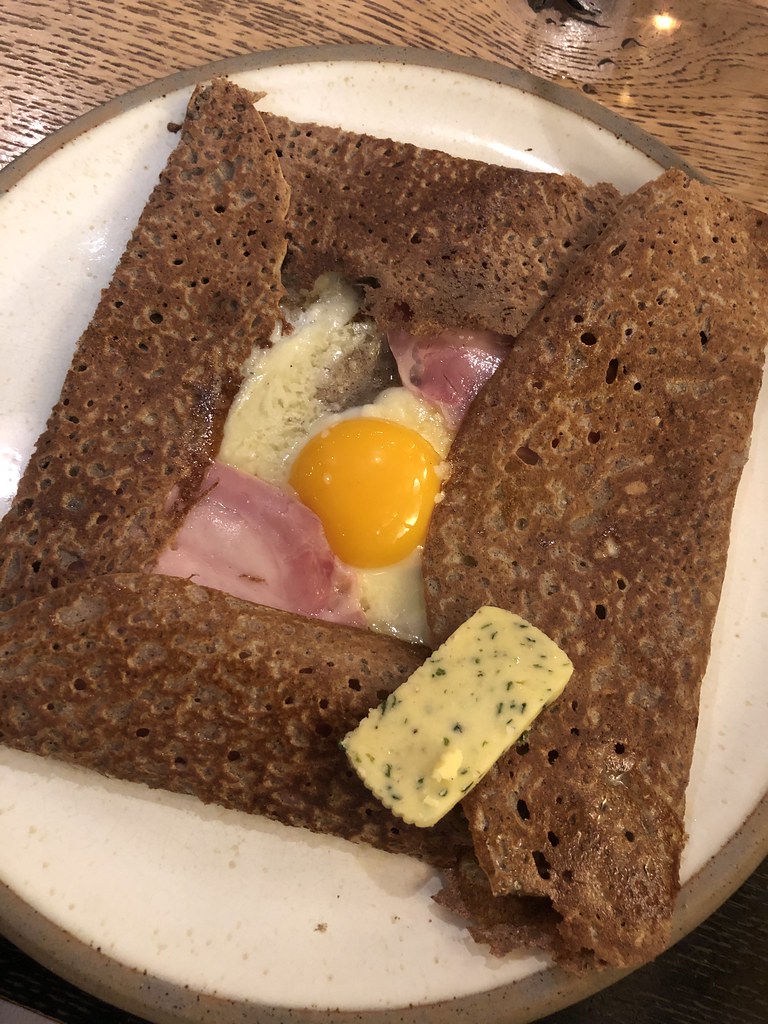 Also when in both Normandy and Brittany it's good to remember that crepes are made with wheat flour and are generally sweet, while galettes are made with buckwheat flour and tend to be savory. In fact, my hotel rate included breakfast, which featured fresh made crepes, homemade jams, and yogurt. They really love their flat pancakes here, luckily so do I! 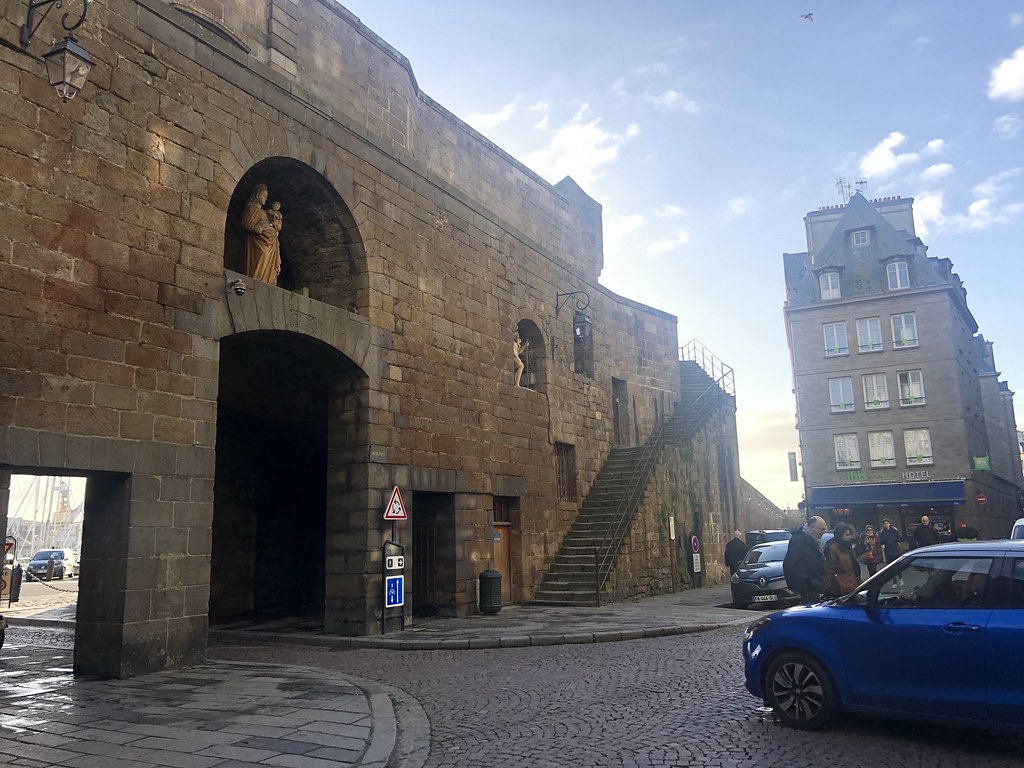 The next morning was gorgeous and sunny, perfect for walking the entire city walls. But first Forest and I went to the Bordier Butter shop where we watched them form the butter into bricks with paddles while also picking up a few. There is a museum of butter in the shop as well, but it was being cleaned when we arrived so we weren't allowed in. 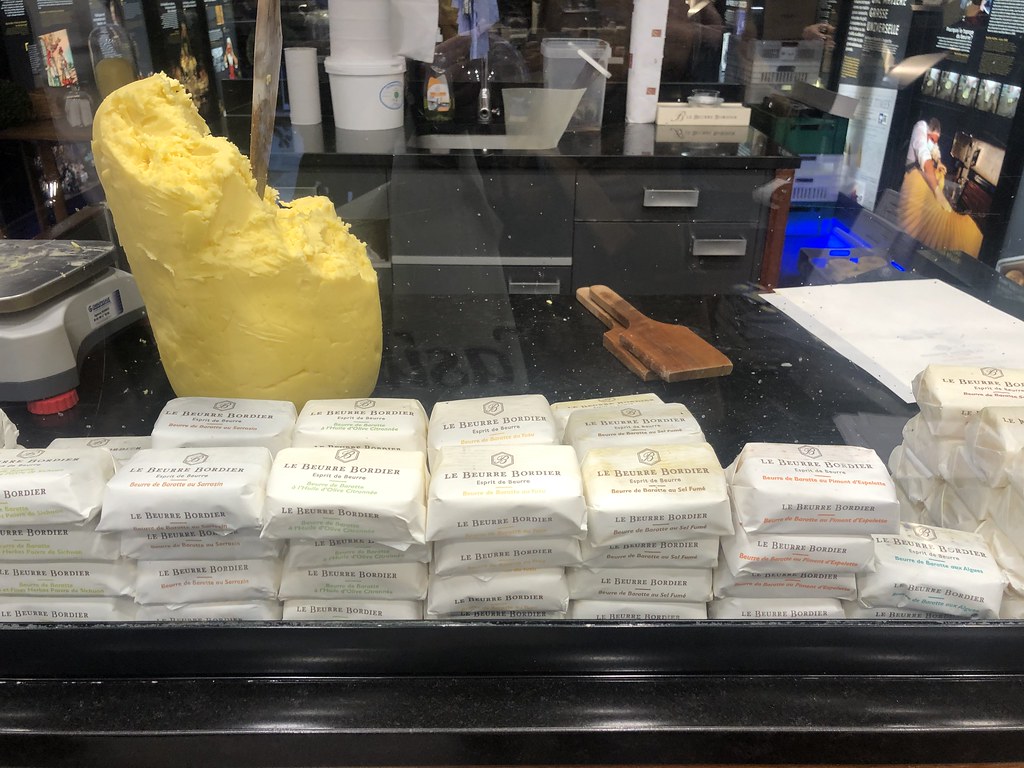 Other items that I purchased and would highly recommend are tins of sables Breton (buttery cookies which are absolutely addictive) and jars of babas from Babas of Saint Malo. These little cakes are soaked in delicious syrup, like rhum, calvados, whiskey, triple sec, and sold in jars. I wish I has some right now! 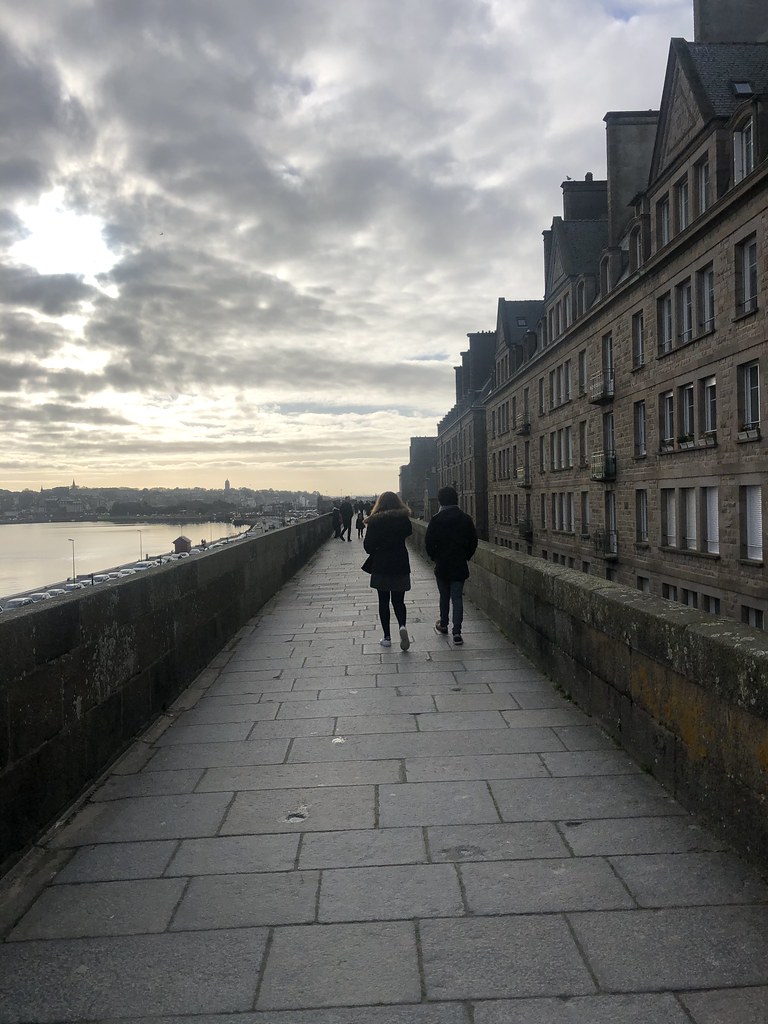 Shopping over it was time for our stroll. The city walls are 2km around and offer up gorgeous views. These ramparts were constructed in the 12th century and have been reconstructed and replaced as necessary over the years. It was fun to envision which of the apartments Marie-Laure LeBlanc, the blind protagonist of the fictional story that took place here, lived in during the war. 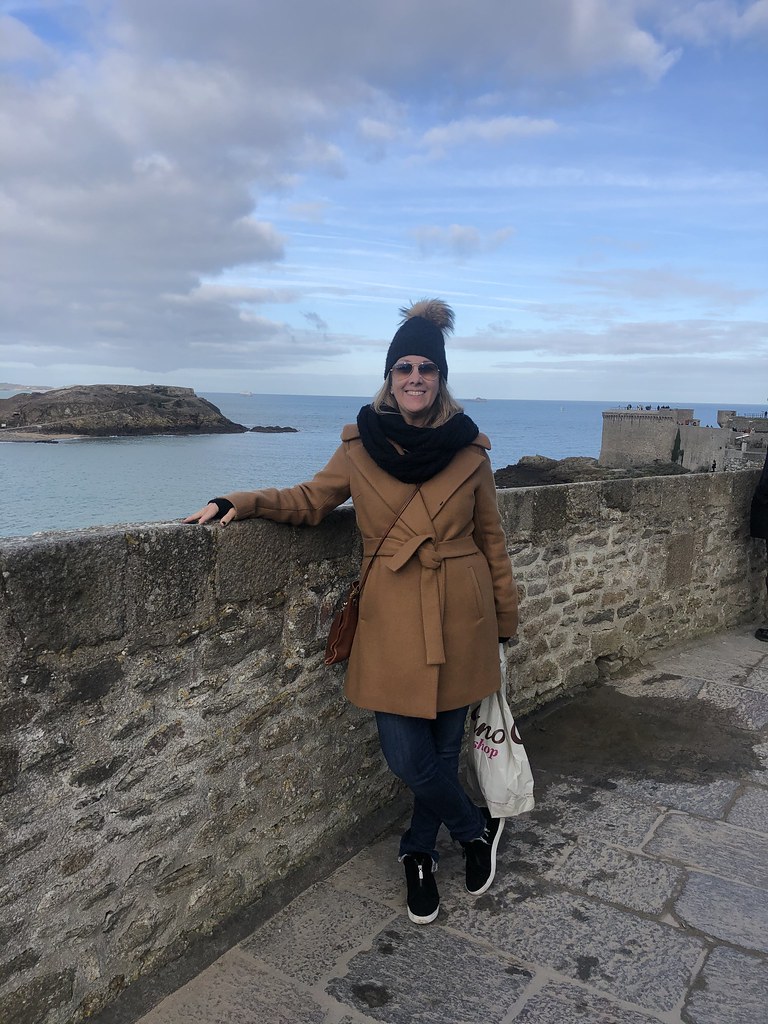 Just off of Bon-Secours beach, the island of Grand Bé is the burial site of the French author François-René de Chateaubriand. When the tide goes out there is a stone walkway that you can walk on to get there but it's fully submerged when the tide comes in so you'll need to time it just right or swim back! 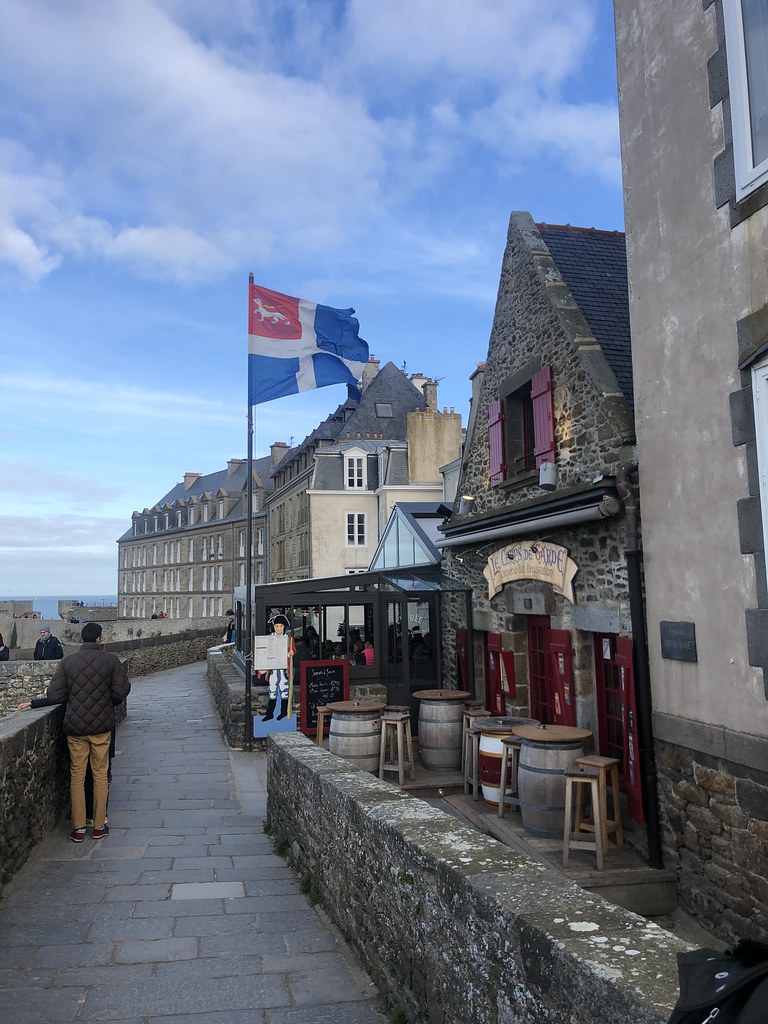 Just before packing up the car and heading out, I stopped at one of the nicer bakeries and bought a couple of kouign amann. This famous pastry of the region is made with layers and layer of flaky pastry, copious amounts of Brittany's salted butter, and sugar which turns almost caramel-like during baking. It's sweet and salty and crispy and utterly one of the most delicious things you will ever eat. Do like I did and get a few, they taste nowhere near as good once you're out of Breton. 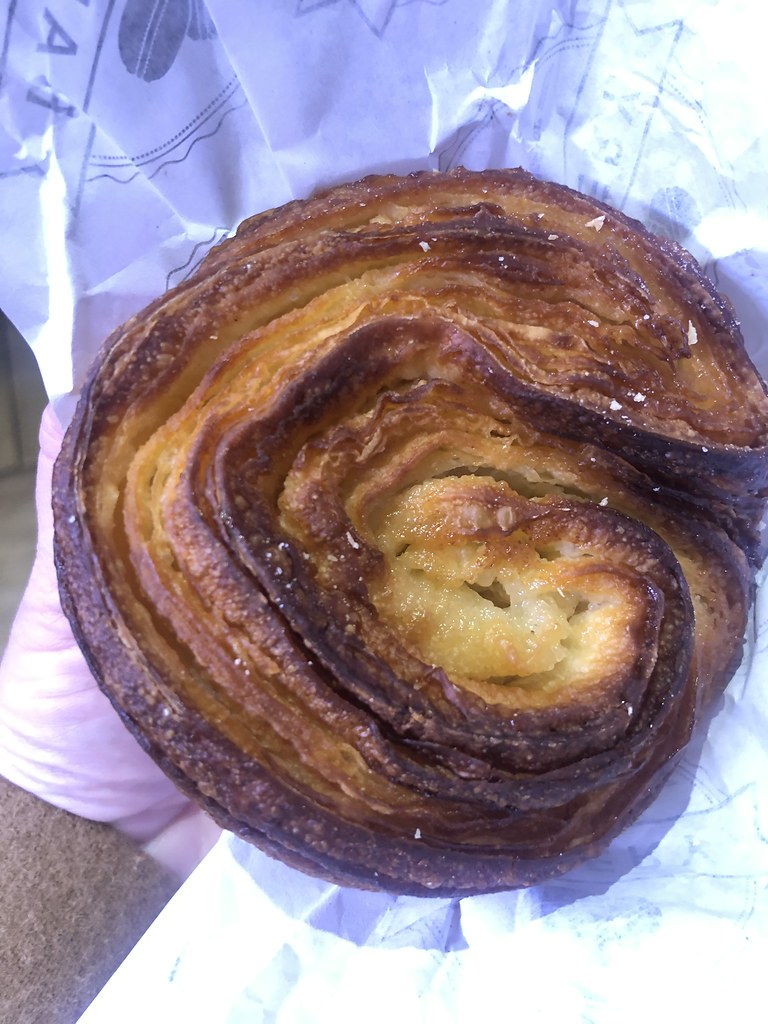 And with that we said goodbye to the city of the super weasel and were on the road to our final destination; Mont Saint Michel!

All photos of Caen & Bayeux here.

All photos of Saint-Malo here.