I was off to spend the holidays in Le Perche, a region just west of Paris, bordering The Loire to the south and Normandy to the north. Friends Forest and Thibault had just recently bought a house in the area, which is close enough to Paris that it is becoming quite the place to buy. It was my first visit out there and I was excited!

I usually like to fly direct to Paris from Seattle but Alaska Air had recently dropped Delta as a mileage partner so Icelandair was my best choice. I booked in Saga Class, which was both comfortable and also better for boarding with a huge Longchamp tote filled with wrapped Christmas gifts. Oops! 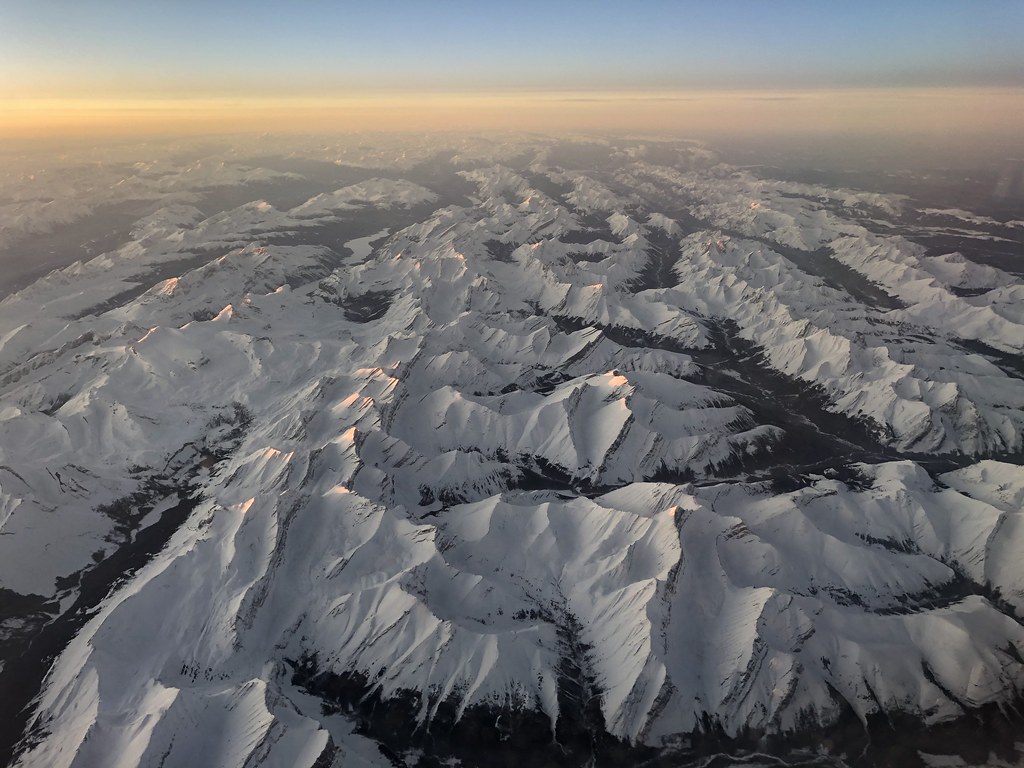 There was no one next to me on either the Seattle to Reykjavik or Reykjavik to Paris legs; there were actually only four other passengers in Saga on the flight to Paris!

France is known for a lot of things and strikes of all kinds are absolutely at the top of the list. On Dec 5, 2019 France had a transportation strike that ended up being the longest in over 50 years. It caused a lot of stress leading up to my trip. I would be flying into CdG but then I needed to take the train out to the country house, but the trains weren't running. The house is about 2 hours from the airport so having someone drive 4 hours round trip was a pain. Did I mention it was Christmas Eve and Thibault's entire family was there??

Thibault's brother knew of a service called BlaBla Car and for €11 booked a complete stranger to pick me up in his van, joining another passenger. Driving through Paris we made various stops picking up 5 more people. We had all paid in advance and would be dropped off at different towns along the way. It was quite the 2 hour experience with me just off of 9+ hours of flying, jetlagged, and no one else speaking English. Finally I was dropped off outside of Chartres where Forest was waiting to pick me up. She had quite a laugh as multiple random people piled out in order to let me climb out of the back seat. BlaBla was a great option but it was no Saga Class! 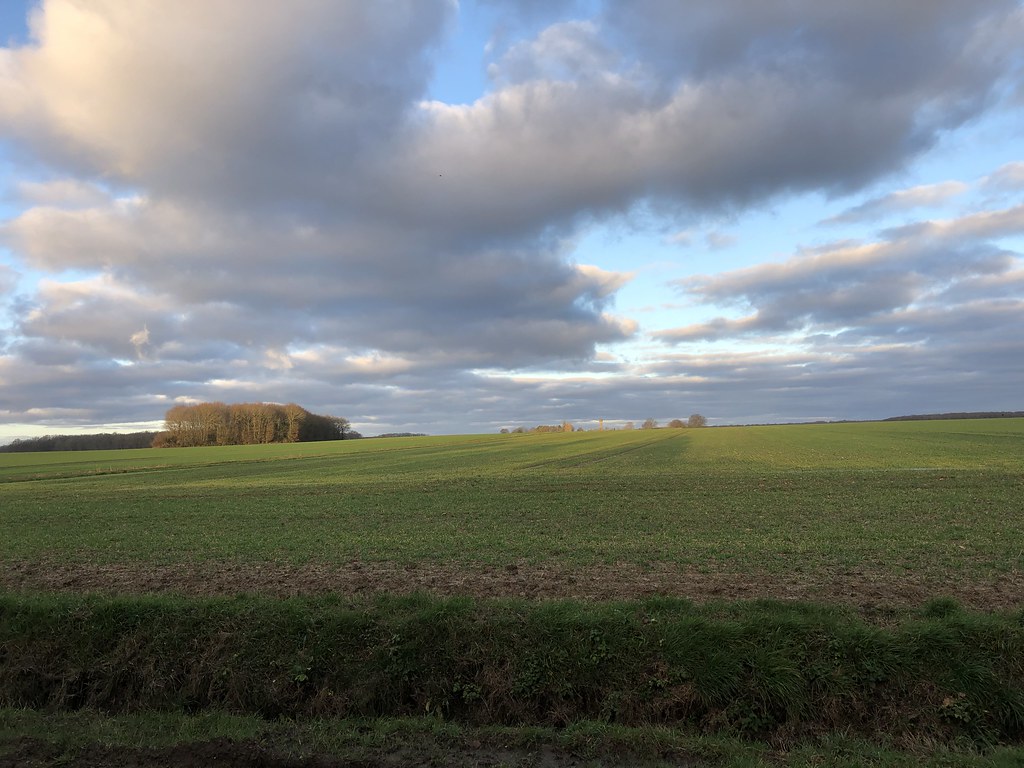 The area of Le Perche is known for its farmland and forests. The hamlet of Le Mesnil-Thomas where my friend's house is located has a population of only about 300. The mayor lives just down the street! The closest town for bread, groceries, banks, etc is Senoches, luckily just about 10 minutes away. 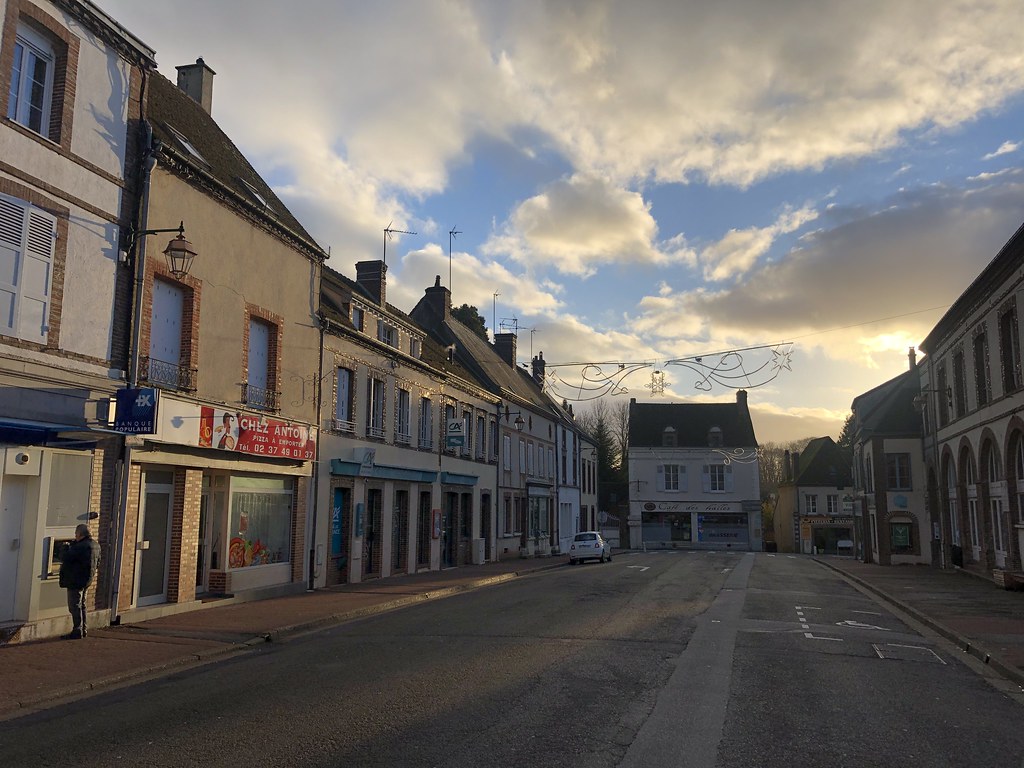 It was a truly enjoyable and traditional French Christmas celebration with their family who were visiting from London, The Hague, and Beaujolais. For two days we feasted on foie gras, oysters, smoked salmon, escargot, capon, and of course lots and lots and lots of wine and cheese! 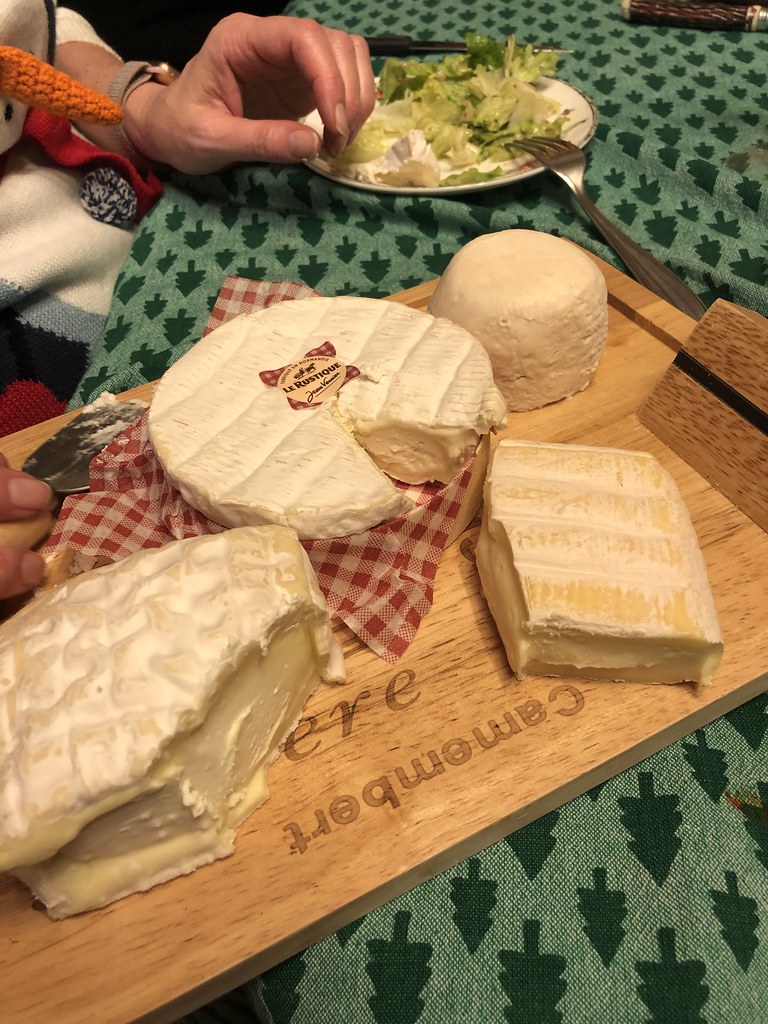 The day before the family left we all piled into two cars and drove to Chartres for the day. The old town area of this historic city is incredibly pretty, especially with all the Christmas decorations. We started off with a lovely prix fixe lunch at Les Feuillantines (where I had to have more foie gras) before wandering the picturesque cobblestone streets lined with half timbered buildings. 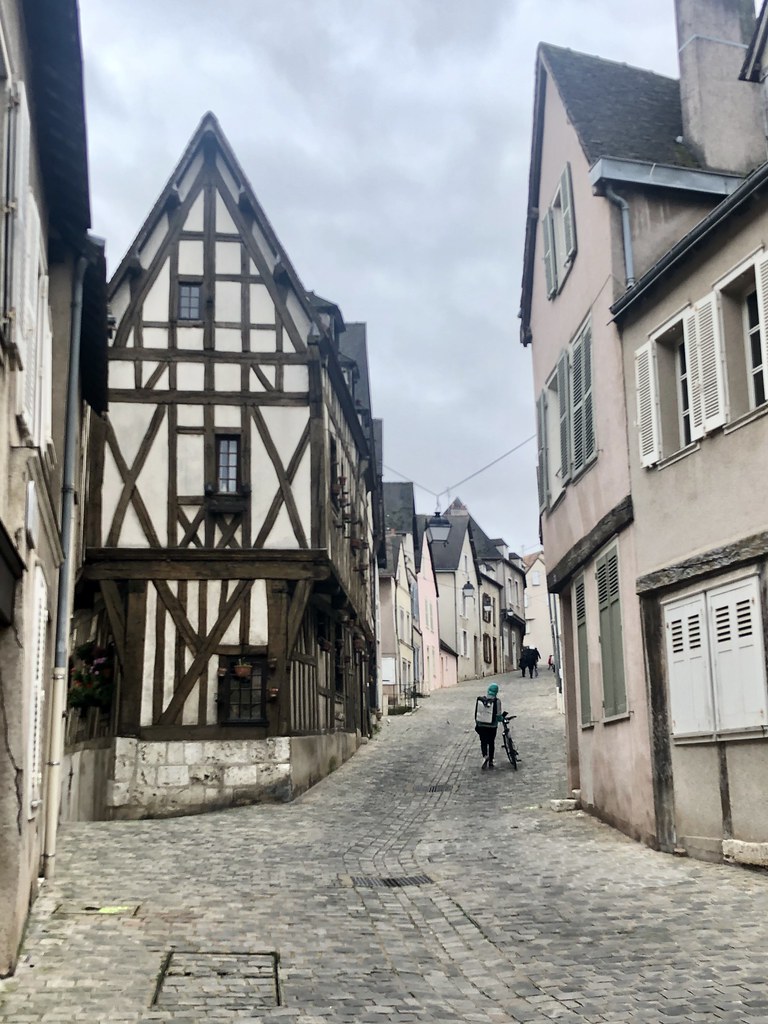 The Christmas market was already closed for the season (surprising as most stay open until New Years) but we were mainly interested in the famous cathedral which has a light show on its exterior every evening of the year from dusk until 1am. It wasn't quite dusk yet so we spent some time exploring the inside of the 800+ year old cathedral. 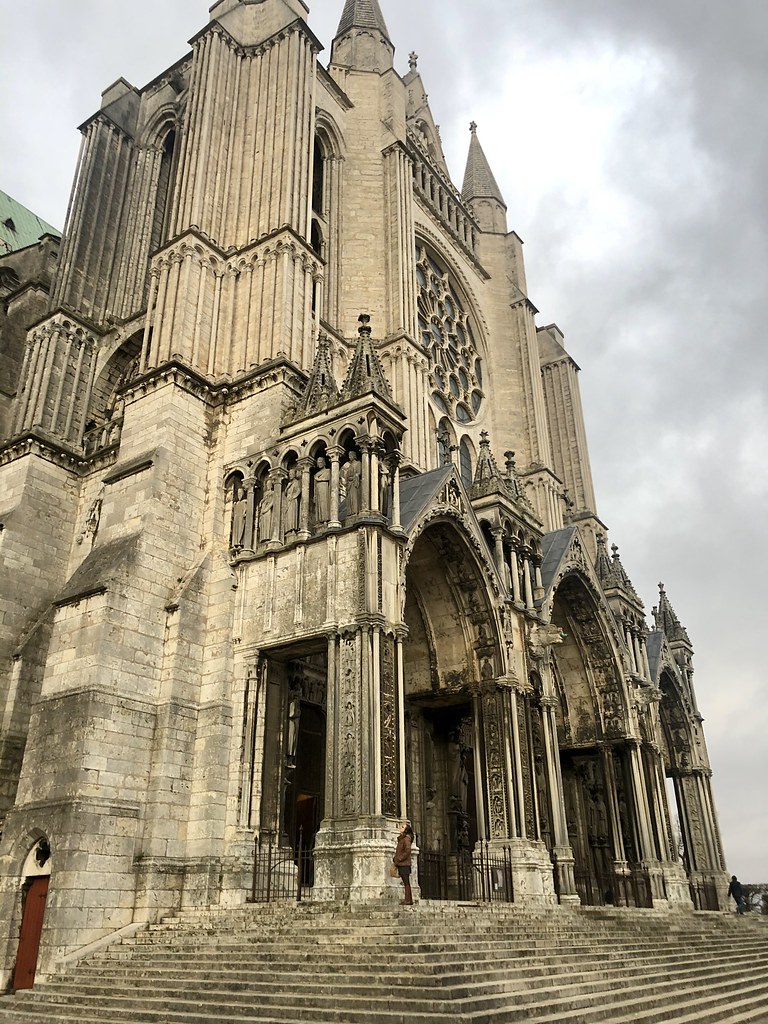 There is a lot to see inside! So many stained glass windows, so many sculptures. The choir wall is getting a good cleaning and it was amazing to see the difference side by side. 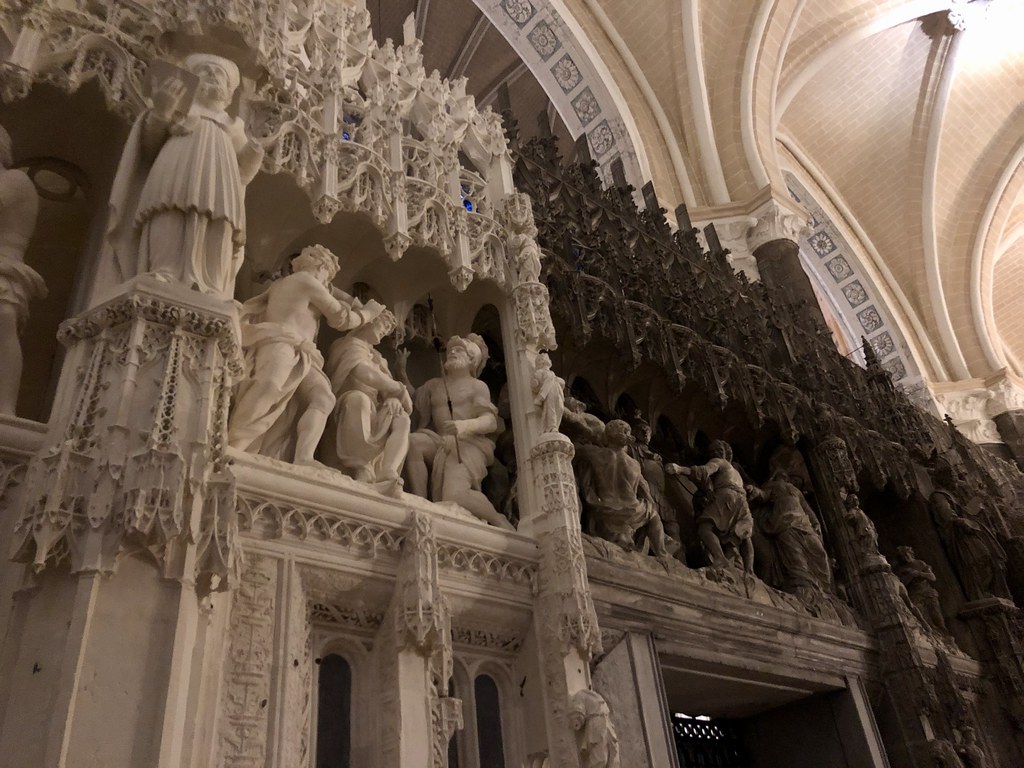 This cathedral is also famous for its labyrinth on the stone floor. As there had been services the evening before and the chairs were still set up we couldn't get the full effect but I don't think I've ever seen one of these in a church before!
The light show on the exterior was wonderful! I highly recommend this if you happen to be in Chartres! 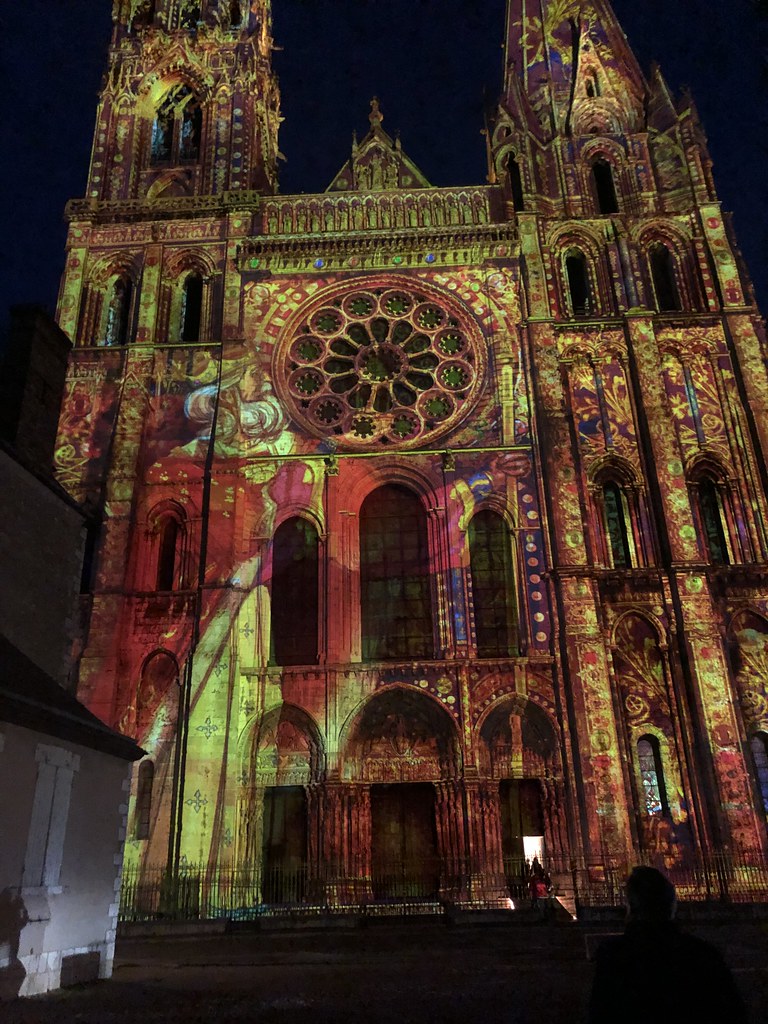 The next day Forest and I drove to Senoches to shop at the market which happens every Friday. It's small, just like the town, but there was a good selection of shellfish, meat, veggies, cheese, and wine. 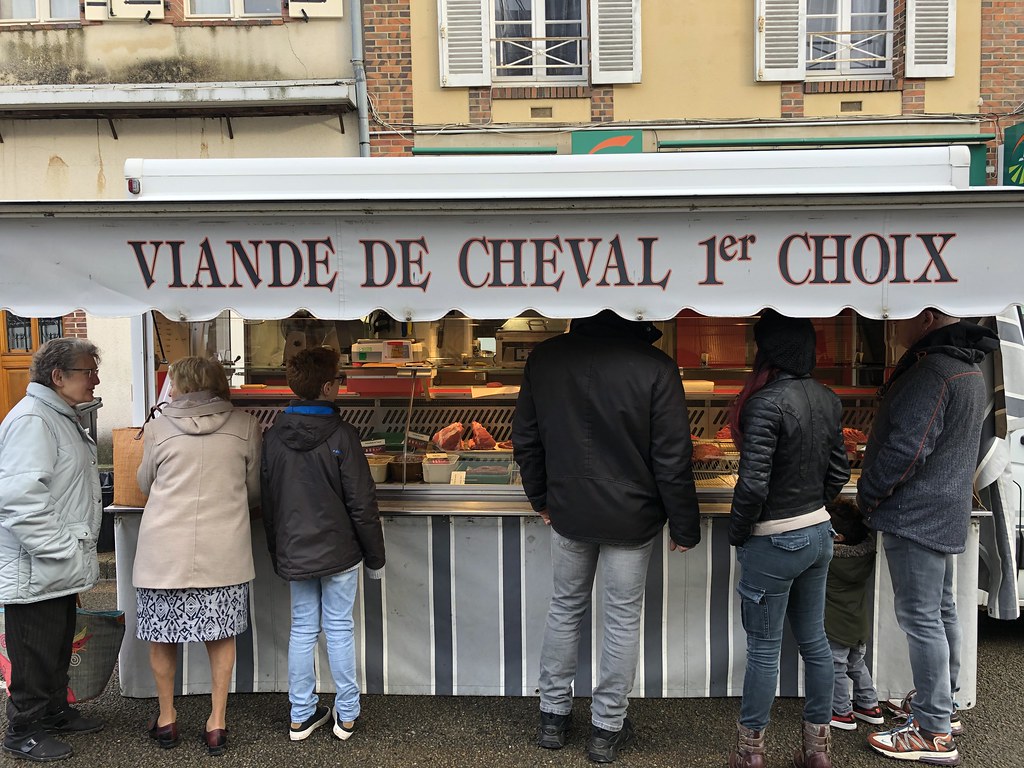 I haven't spent too much time in rural France (outside of vineyards) before but I'm a sucker for a small town so this was all super to me. We were heading off on a road trip to explore Normandy for the next 9 days but I'd now had a little taste of Le Perche and was looking forward to seeing more when we returned!
All photos of Le Perche and Chartres here.
Other post from this trip:
Intro to Normandy; Honfleur
Day Trip to the Parisian Riviera
New Year's Eve in Normandy
D-Day Beaches of Normandy
Normandy to Brittany
Last Stop Normandy; Mont Saint-Michel
at March 28, 2021