Trip dates: June 2020
Pandemic. The word that put travel to a stop. March 2020 came in like a lion and messed up everything. There would be no annual trip to Hawaii. April; the New York trip with Broadway tickets was cancelled. May; South of France, Lake Como, Lichtenstein with friends- all cancelled.
I was depressed. Many people were. I wasn't going to fly anywhere but when my aunt and uncle mentioned they were driving to Oregon in their RV I immediately suggested a family reunion somewhere on the coast. I didn't care where, I had never been to the Oregon coast, I just needed to get away.

My brother said he was game so the plan was set. The RV would be in Garibaldi, my brother got us an Airbnb across the water in Bay City. There was a (road) trip on the calendar!
I'm not actually a big road trip person. I mean if I am in Scotland or Slovenia, sure! But in my own backyard I get a little antsy. Not as antsy as sitting at home for 3 months though. So I took I5 from Seattle to Portland (I hadn't even driven this in years as I always take Amtrak!) and then took Hwy 26 to 6, west to Tillamook. Total drive would be about 4 ½ hours. The only stop I made was at a Taco Bell drive-thru for lunch; at this point very few places had dine-in service and I wasn't interested in that anyway.
Driving through the Tillamook State Forest was gorgeous, until I hit Tillamook proper and had to close my sunroof and windows. Pew, cows galore! But it was still pretty. And it felt so good to be in unchartered territory again!
My family had arrived in the area the day before and were all settled in when I showed up. The Airbnb my brother had arranged for us was very big and very 70's in style. There was a massive deck that ran the length of the house but unfortunately there was no deck furniture and the BBQ was a sad heap of rust. Luckily my uncle had plenty of lawn furniture, a BBQ, and a smoker in his RV so we were in business! 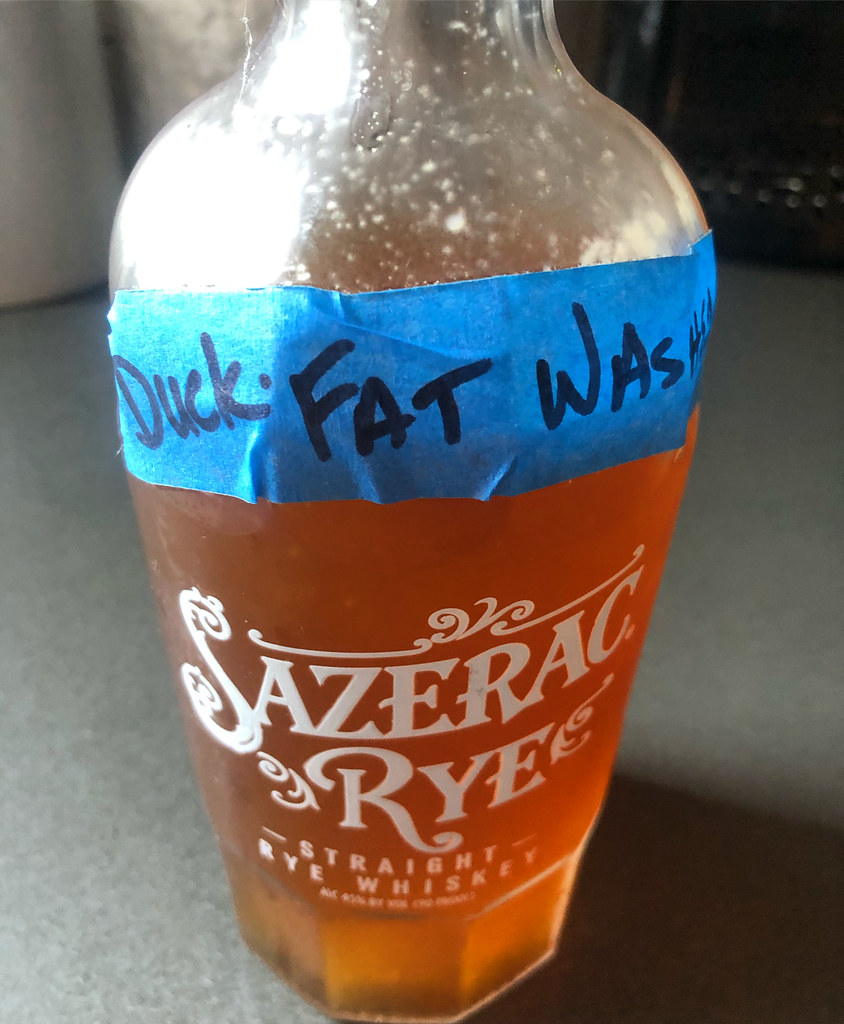 It was spectacularly sunny when I arrived so we planted ourselves on that big deck with the gorgeous views of the bay and caught up. There was rosé, steamed clams, duck-fat washed Sazeracs (I had pre-batched), and a fantastic smoked tri-tip dinner that my uncle made. 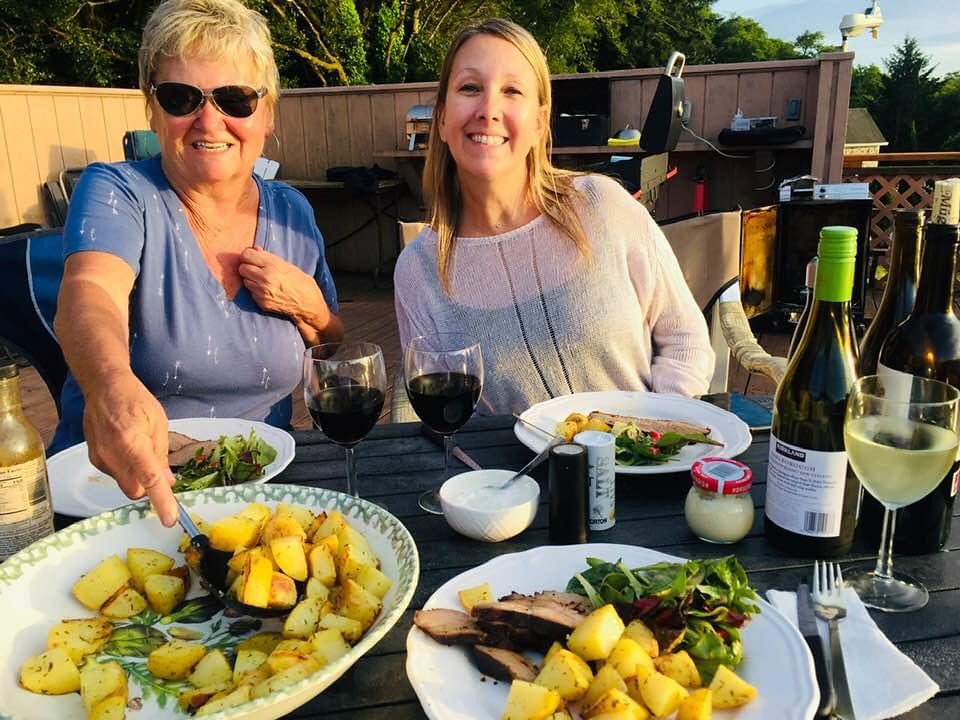 It felt great! And a bit weird after being cooped up for so long. My family doesn't seem to take COVID as seriously as I do (even though they are all older than me) so I had some stress around their lack of concern. But we all hadn't been together in years and this was a great first night (spent outside). 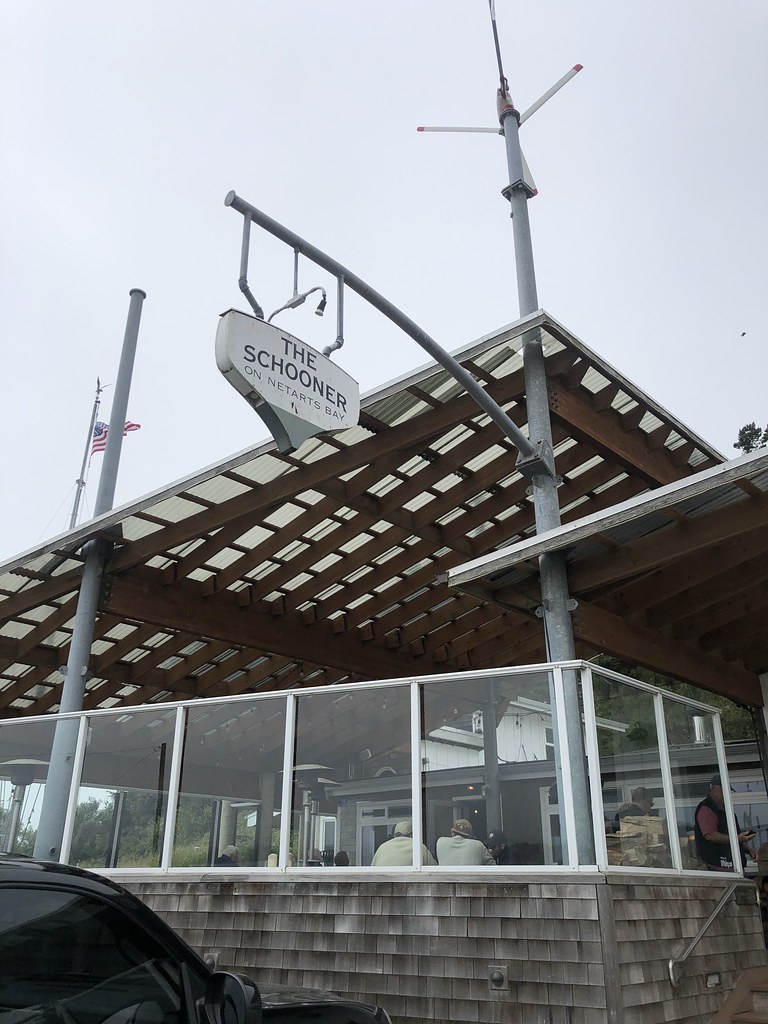 The next day we drove to Netarts for lunch at The Schooner. This was my first meal in a restaurant since the pandemic. I was a bit nervous but luckily the restaurant had a big outside patio with tables spaced apart. It wasn't the best fish and chips I'd ever had but it was fine. The beer was good! The company better! 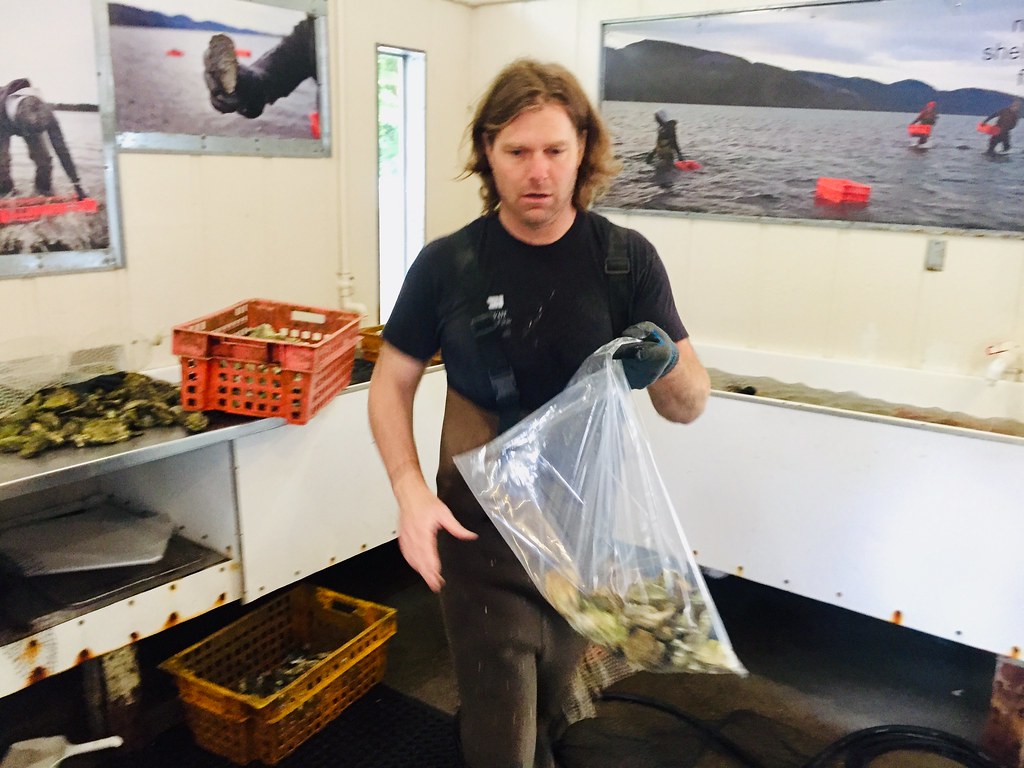 After lunch we drove along the shore road until we got to Nevor Shellfish. This was an accidental find of my uncle's and a good one! I learned from looking them up later that owner Travis Oja has been working to bring back the Olympic oyster, which was near extinction in the 1920s. The oysters are grown in bags which the tide flows through and around, giving them a really briny and delicious flavor. We were excited to grill our purchase!
Back in Tillamook we stopped in at Blue Heron Cheese and bought some snacks and then Bay City Fish Peddler for some Dungeness Crab that was caught right in our bay. 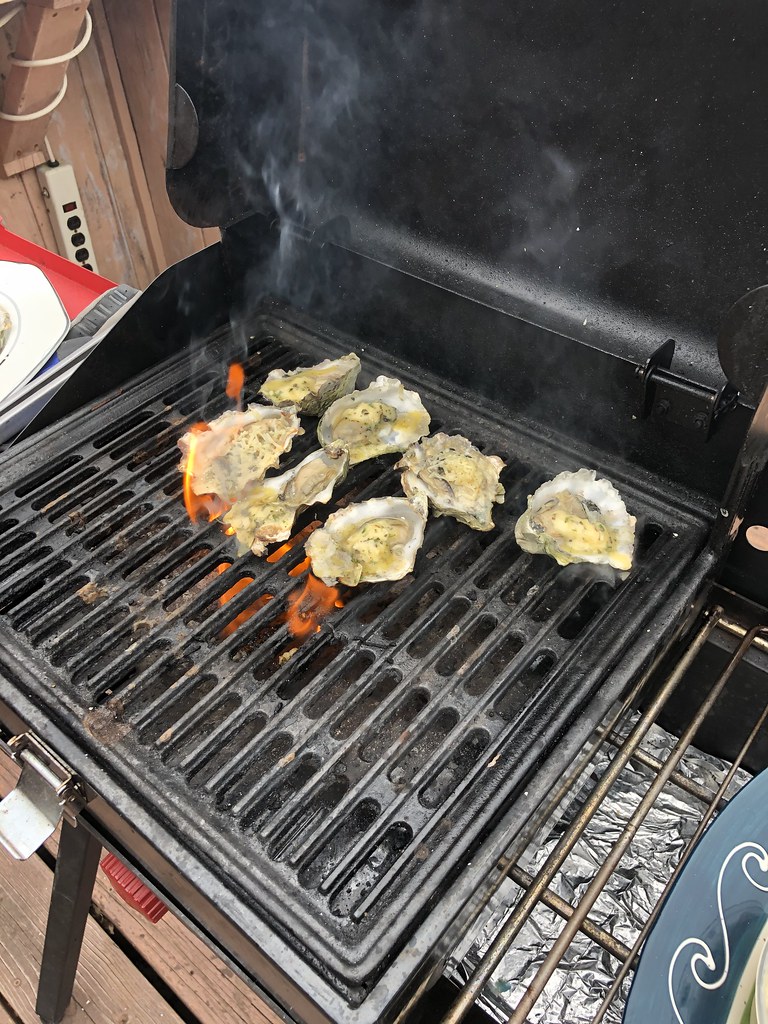 Back at the house my brother learned to shuck oysters while my uncle grilled them. Crab was cracked and dunked in butter. Yahtzee was played. It was a very fun night! In fact it was so fun that I changed my plans to leave the next day, and extended my trip one more night. 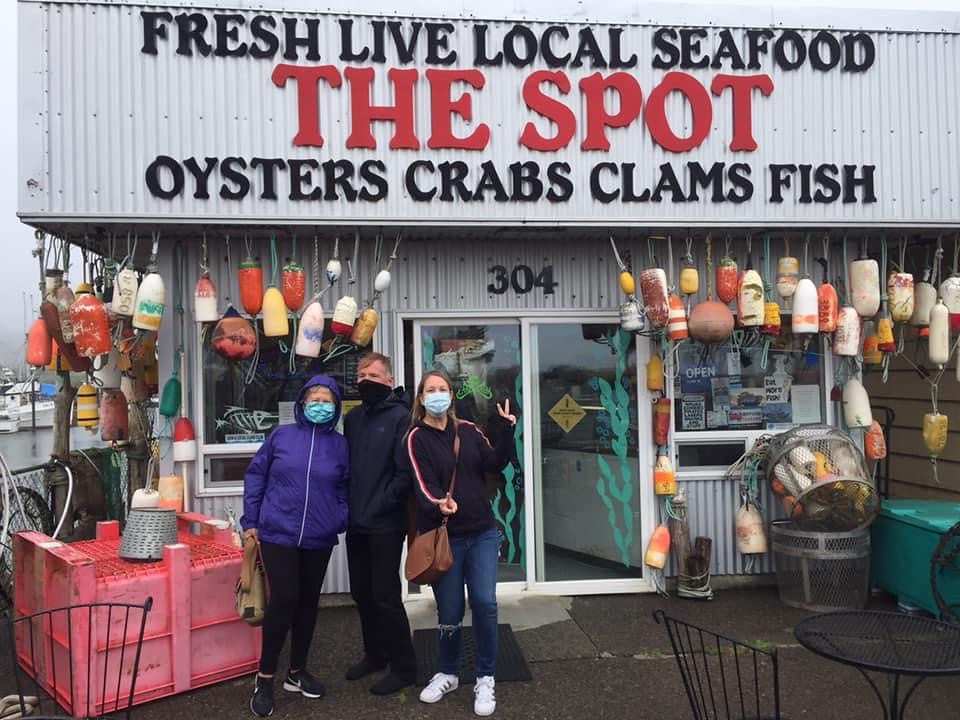 The next day was cool and rainy unfortunately. We headed to the fishing docks in Garibaldi and bought provisions for dinner that night- a side of salmon and some smoked black cod from The Spot. The guy helping us was so great he even threw in a bit extra at no charge.
There wasn't much else to do with things like the Tillamook Cheese Factory closed due to COVID. We stopped into the pub Kelly's Place for lunch. It wasn't good nor was it worth the risk of eating inside. Luckily I had sanitizer spray with me as they didn't seem to. 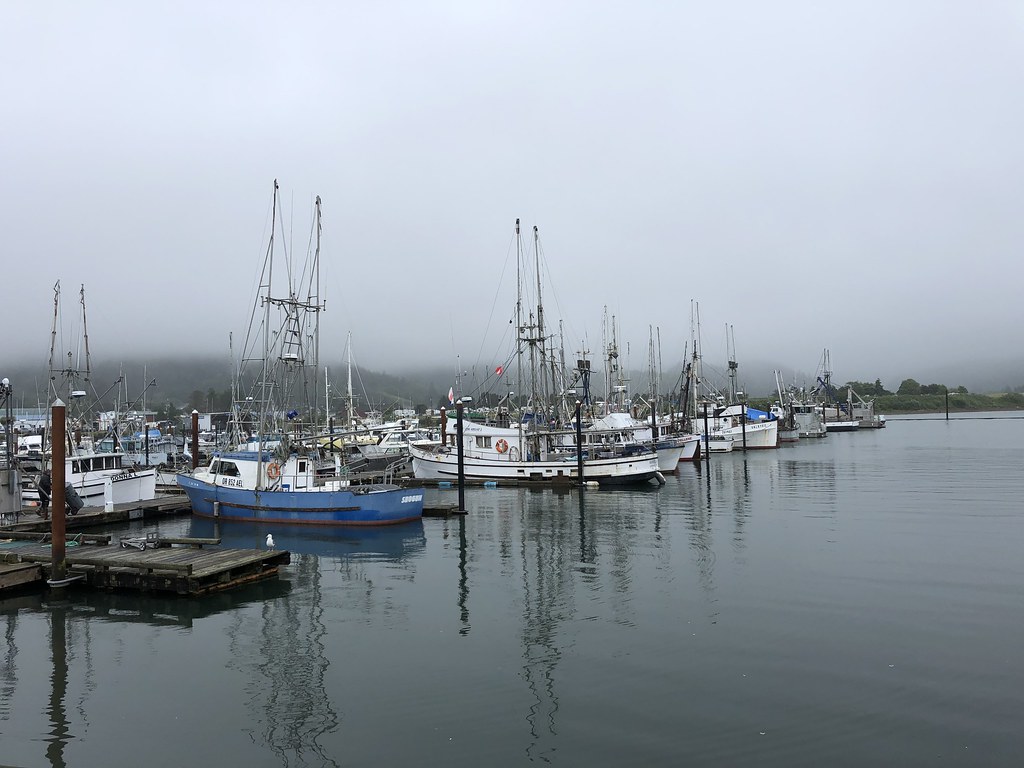 I made slow roasted salmon and burrata salad for dinner, which turned out very well. We had another round of Yahtzee before my aunt and uncle left for the RV park. My brother and I polished off the rest of the duck-fat Sazeracs before heading to bed. Another very nice evening. 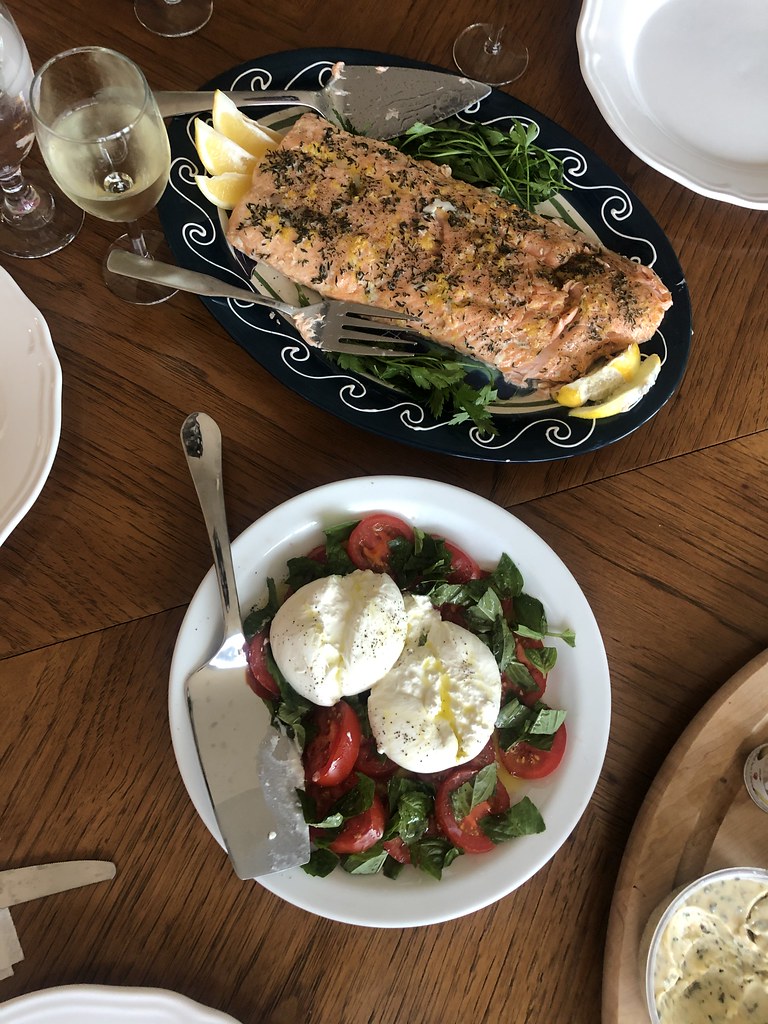 The next morning it was time to say goodbye. I decided to take the long way home, up the 101 past more Oregon beaches since I hadn't been to any of them before. It was a lovely, leisurely drive with stops at Rockaway, various viewpoints, and of course Cannon Beach. With the stops, my drive home was about 5 ½ hours. Lunch was Taco Time drive-thru. 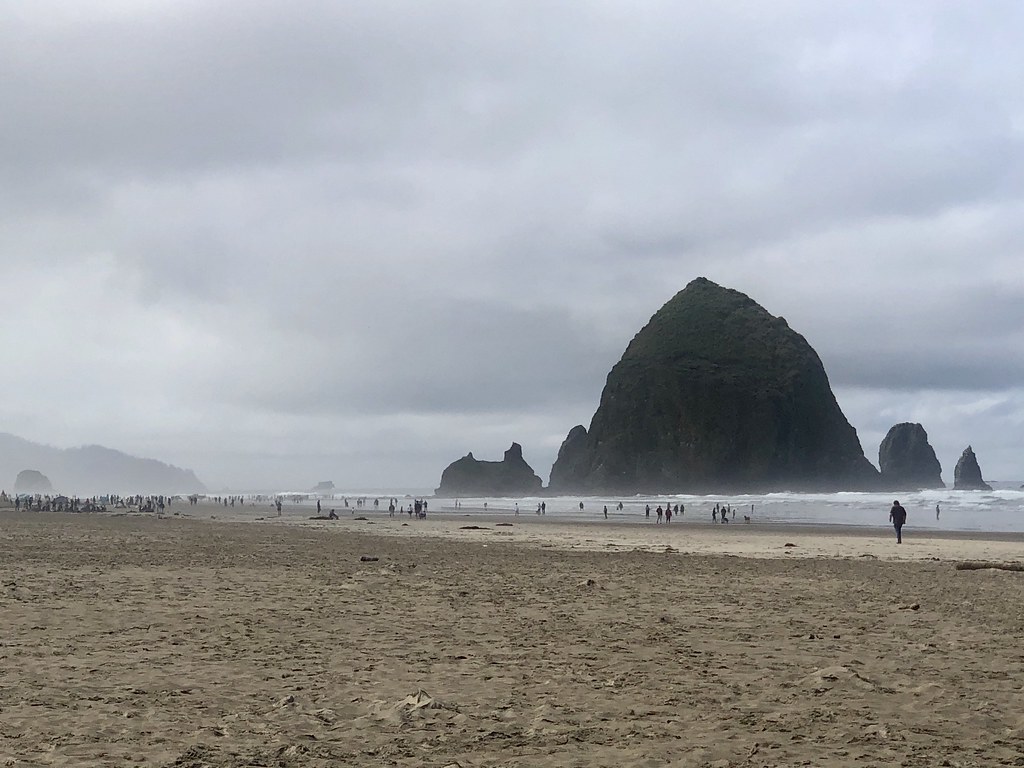 It was so nice to get away from home and a great excuse to see some of the Oregon Coast! But travel during a pandemic also brings some logistical challenges with it. This was a good first foray into doing travel a bit different.
All photos here.
at September 19, 2020