Booze and London go hand in hand. England has been drinking beer since medieval times and the "Gin Epidemic" started around 1698 (when the population, of less than seven million, was drinking ~18 million gallons of gin per year!) 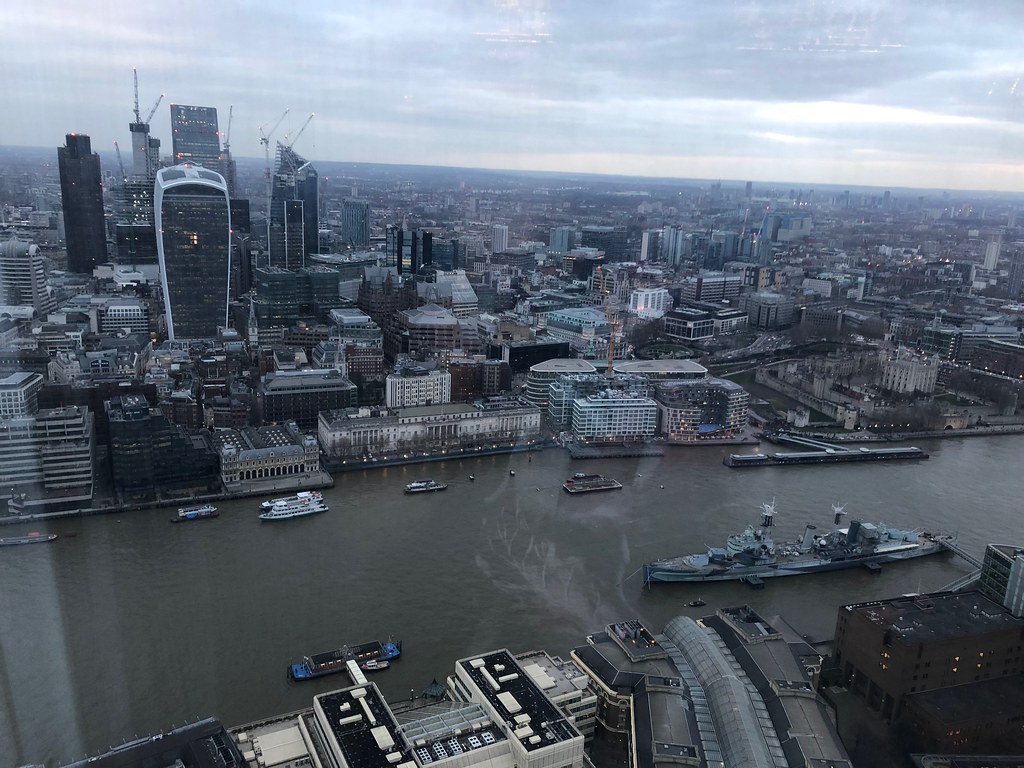 There are a lot of cocktail bars in London, it is impossible to visit them all. We decided on three separate evenings of cocktail crawls, and boy was that a good time! 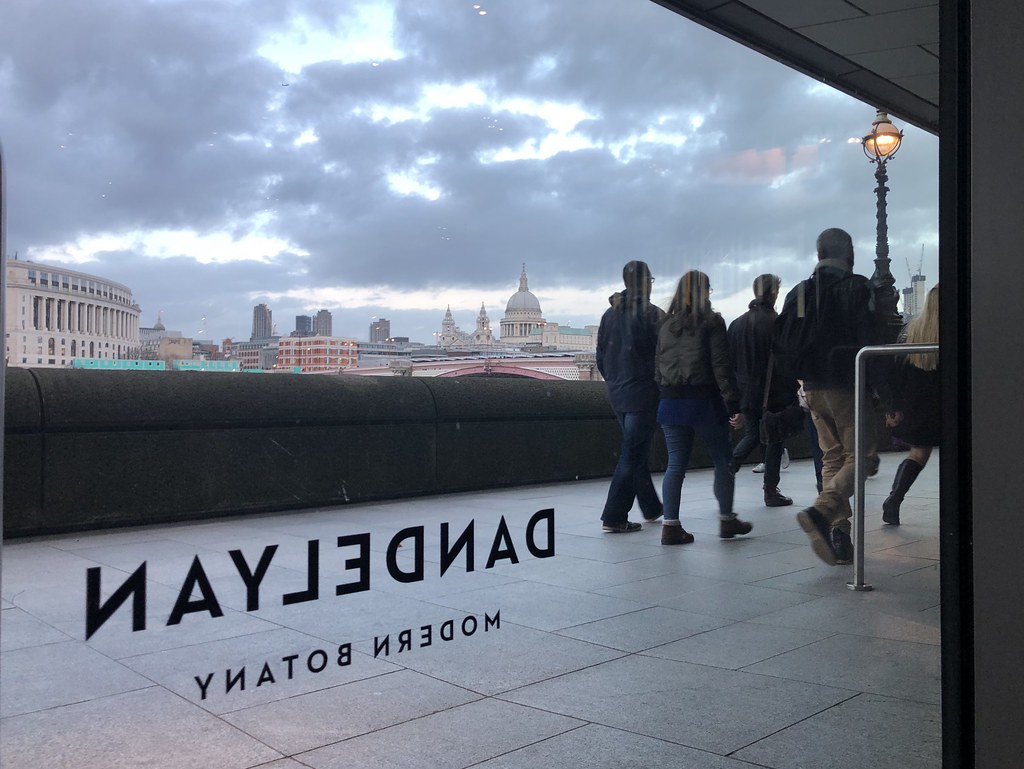 The first night, Mel and I started at Dandelyan, inside the swank Mondrian London. In 2017 Dandelyan was awarded both World's Best Cocktail Bar by TOTC and also came in #2 at the 50 Best Bar awards.

The room here is a showstopper, lush fabrics, gold accents, huge windows looking out on the banks of the Thames. And the cocktails continue the glamour with unique ingredients, interesting storylines, and best of all, deliciously balanced recipes. My Concrete Sazerac was delicate in its delivery of the odd ingredient, while the Bastet, with catnip honey, was wildly different in flavor (and had me purring!) 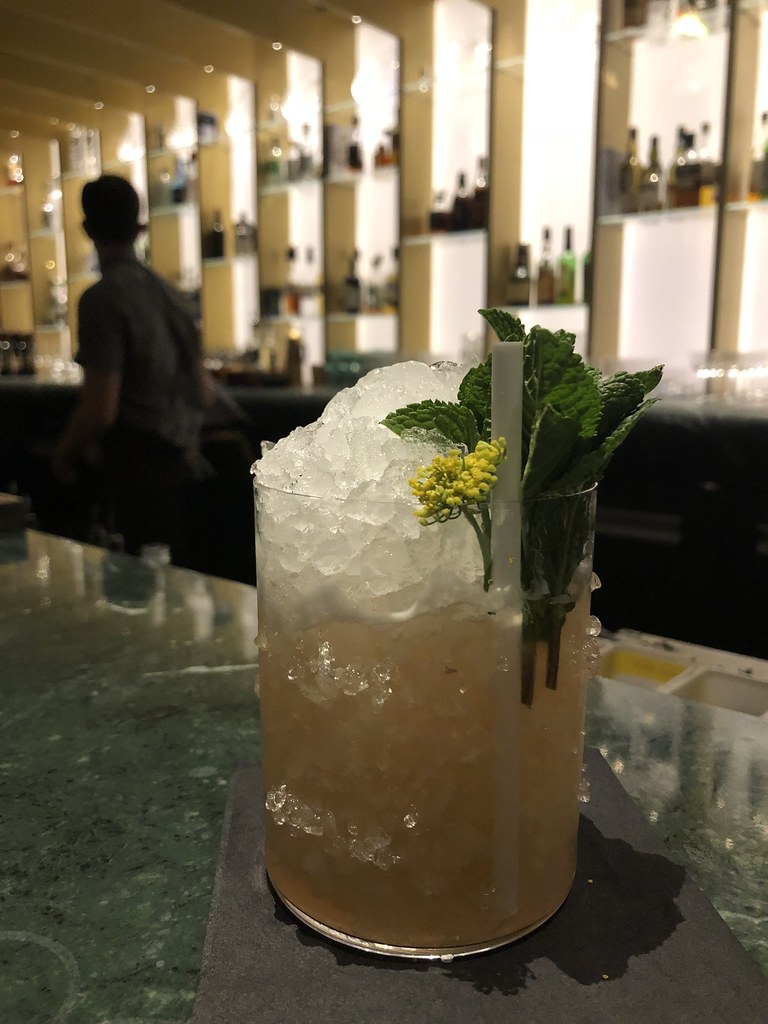 I absolutely loved this place and plan on putting it on my London rotation list!

From here we headed up to the Kingsland area and met Forest and Kate at Untitled, the newest bar from Tony C of 69 Colebroke Row fame. Another killer space, this one sleek and hip, but for me the cocktails were just ok. My main issue is that the menu is very heavy on vodka (because he is using a lot of interesting flavors, so wanting that blank slate) but I just prefer the bigger flavor of a drink based on gin or whiskey. 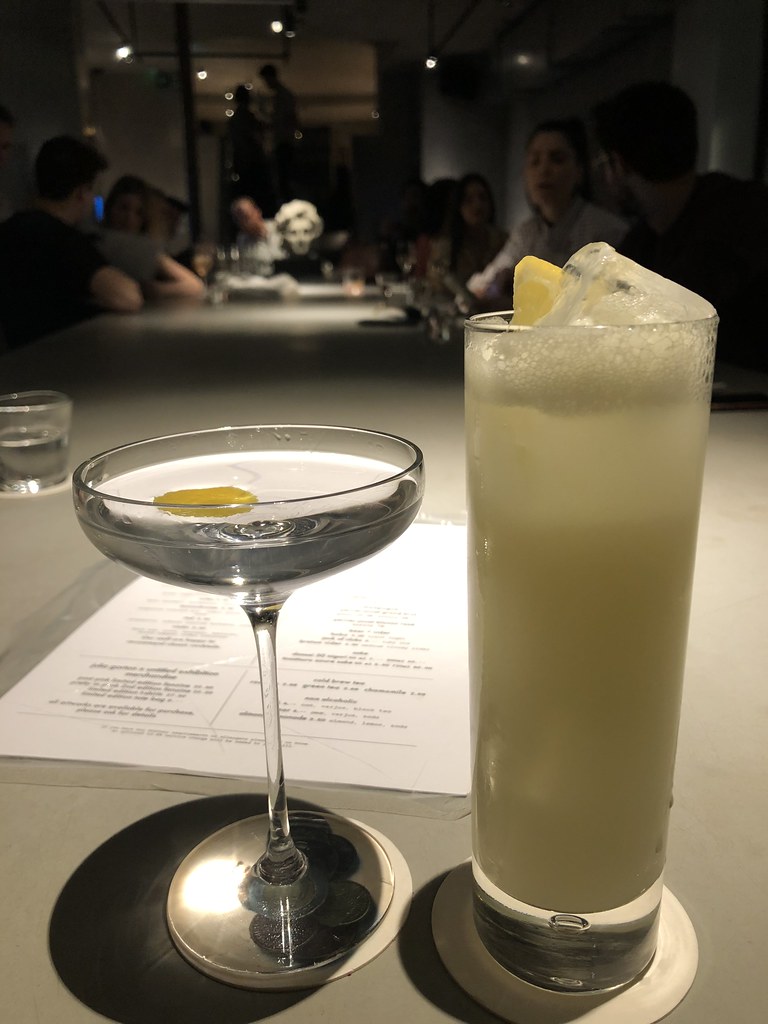 Obviously, the drinks are gorgeous. Untitled is a full restaurant and the Japanese inspired menu looked good. If in the area I'd pop in and order some food!

Just a few doors down is the cozy and cute Three Sheets. Bartenders had been answering our "where do you like?" question with this spot and we weren't disappointed. The bottled French 75 was delicious! It's a tiny spot with a tiny rotation of cocktails. Go. 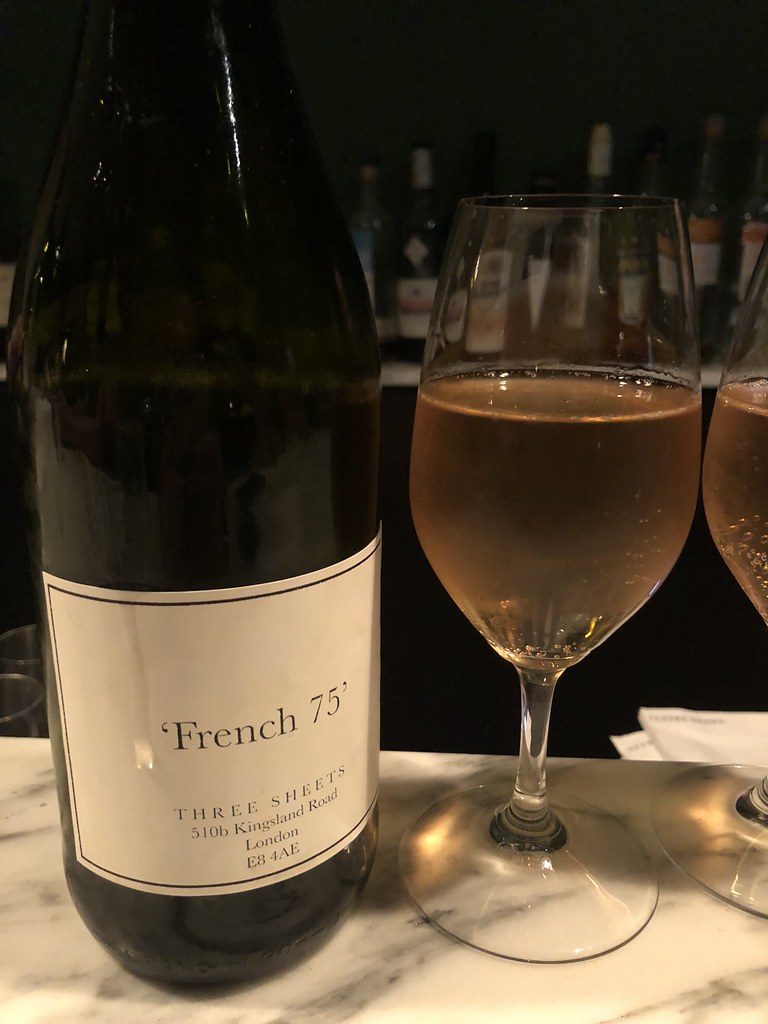 We wrapped up that first night at Cub, the newest from Mr. Lyan of Dandelyan, in partnership with others. The restaurant offers small plates with cocktail pairings and is reminiscent of the most hipster diner ever. 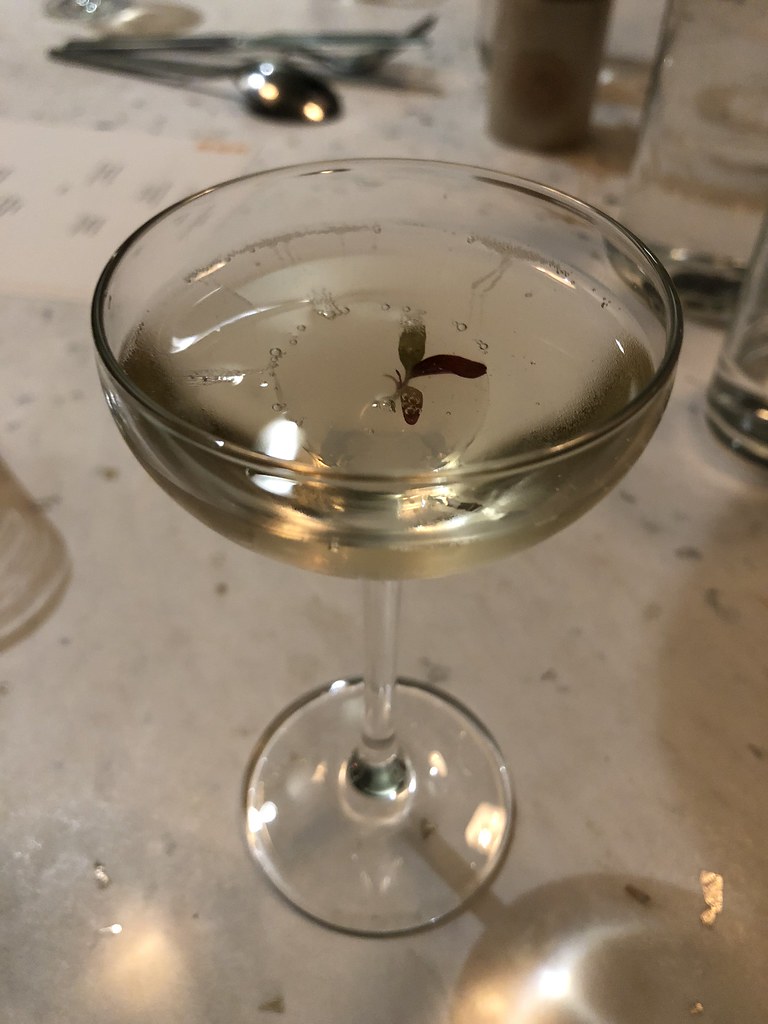 Service was great although our drinks and dishes were a bit hit or miss. Some were excellent while others were really really not. I think they are still finding their footing. The tasting menu with pairings was only £55 so at least we weren't out a bunch. 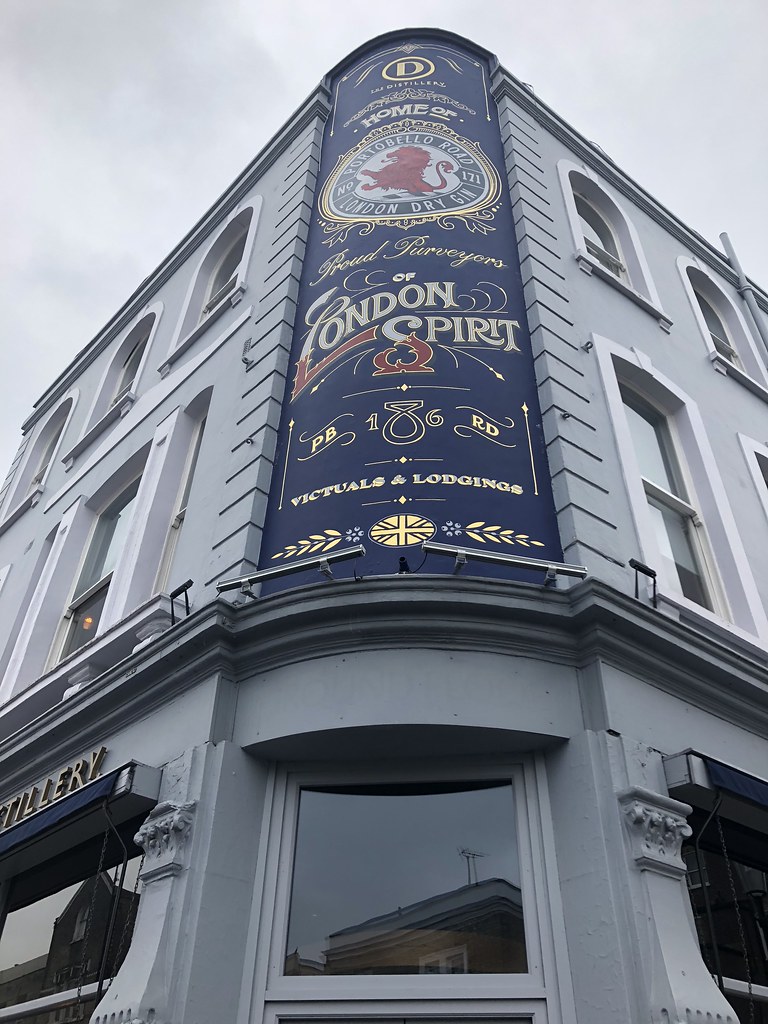 The next day Kate, Forest, and I made our way to The Distillery, a hotel with restaurants, on Portobello Road and had a tapas brunch at GinTonica. I had a gintonic made with the namesake gin, which was quite good. Unfortunately the rest of our meal was not. Our first bites of tinned boquerones on toasty garlicky bread had us hopeful, but after a few bland dishes and then sending back "crispy" potatoes bravos because they were soggy, and having them returned the exact same way we gave up. 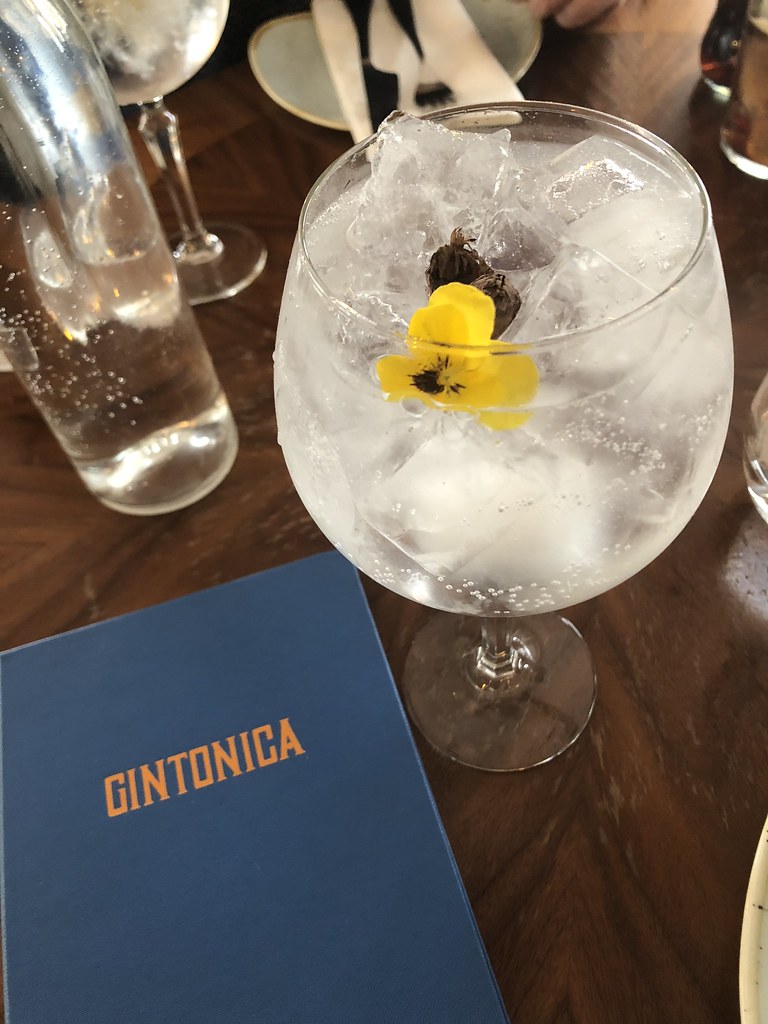 Our server nicely sent out a pistachio salt caramel cheesecake on the house which was delicious, so at least we ended on a high note!

We were then off on the Gin Journey of Notting Hill tour. We had booked in advance and met the rest of the ~16 people at Mam Vietnamese restaurant where our tour guide Mickel started us off with tastes of a couple of gins, refreshing Tom Collins and then followed up with boozy overproof gin "mojitos" with chartreuse. And this was just the first of 5 stops! 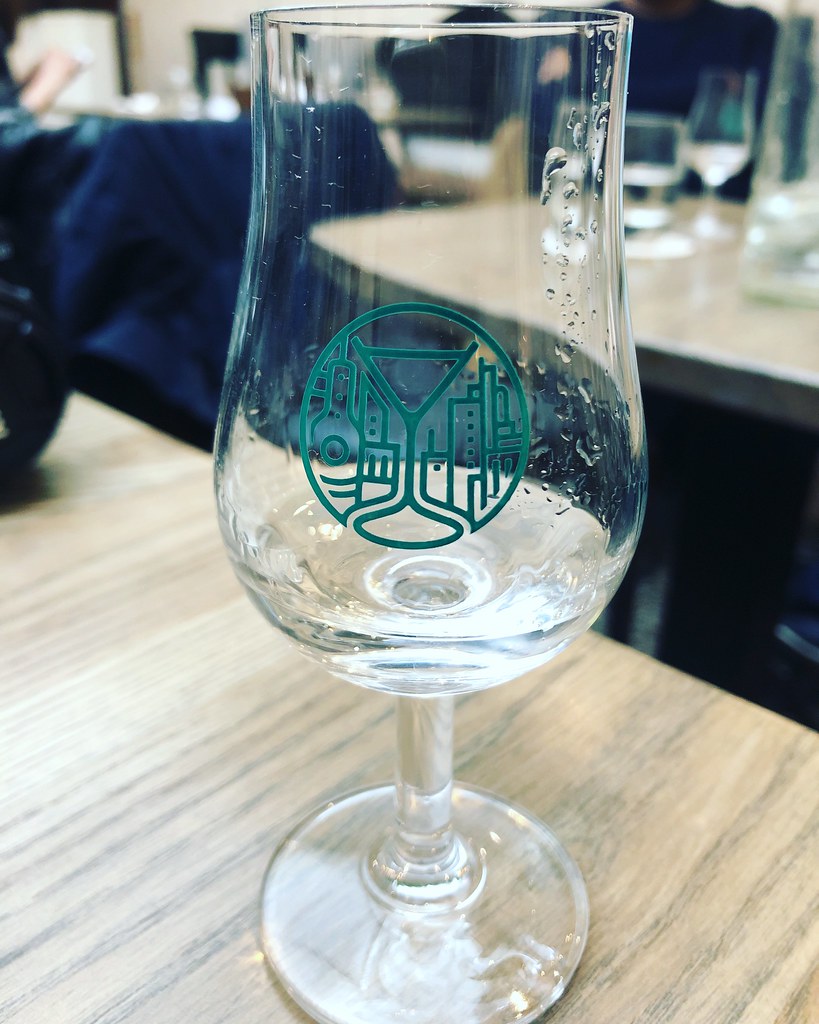 At The Italian Job we were served a lemon gin and limoncello cocktail and the girls and I decided to order a few more bites of food. 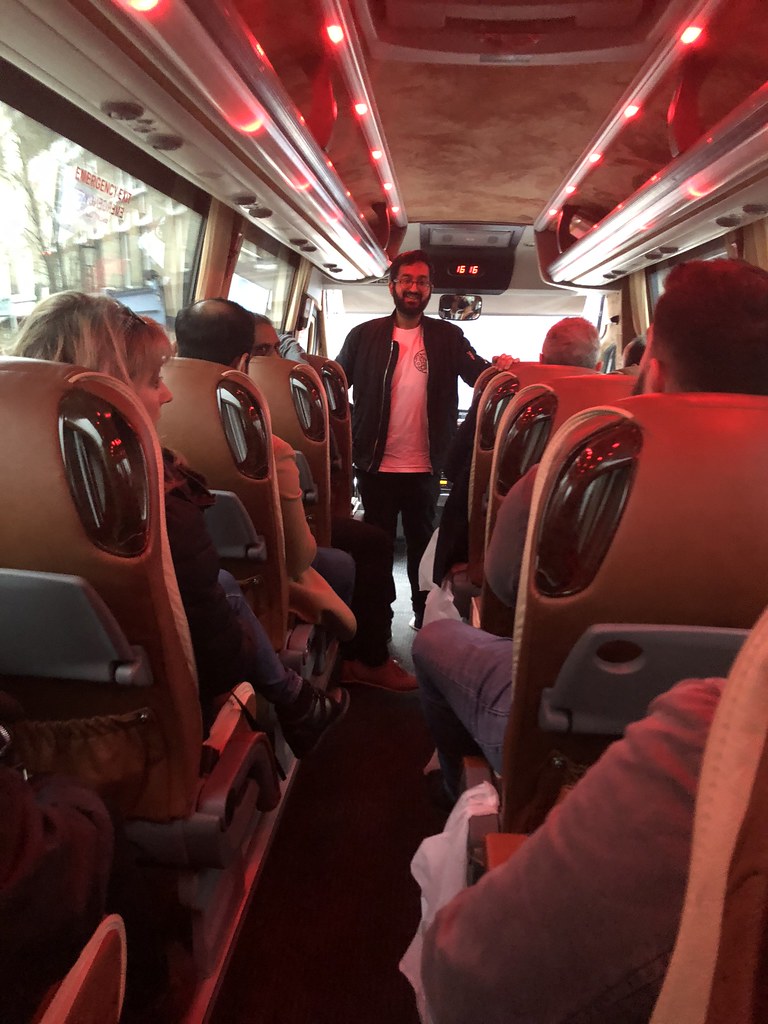 A short bus ride later and we visited the beautiful 108 Brasserie, home of the Marleybone Distillery, who's gin still is tiny! The gin and tonics were not however! At this point some folks on the tour (not us!) were getting really smashed! Almost everyone was a local and I think it was just a good afternoon of drinking for them, without having to drive. People even chided me about not finishing all my drinks!!! 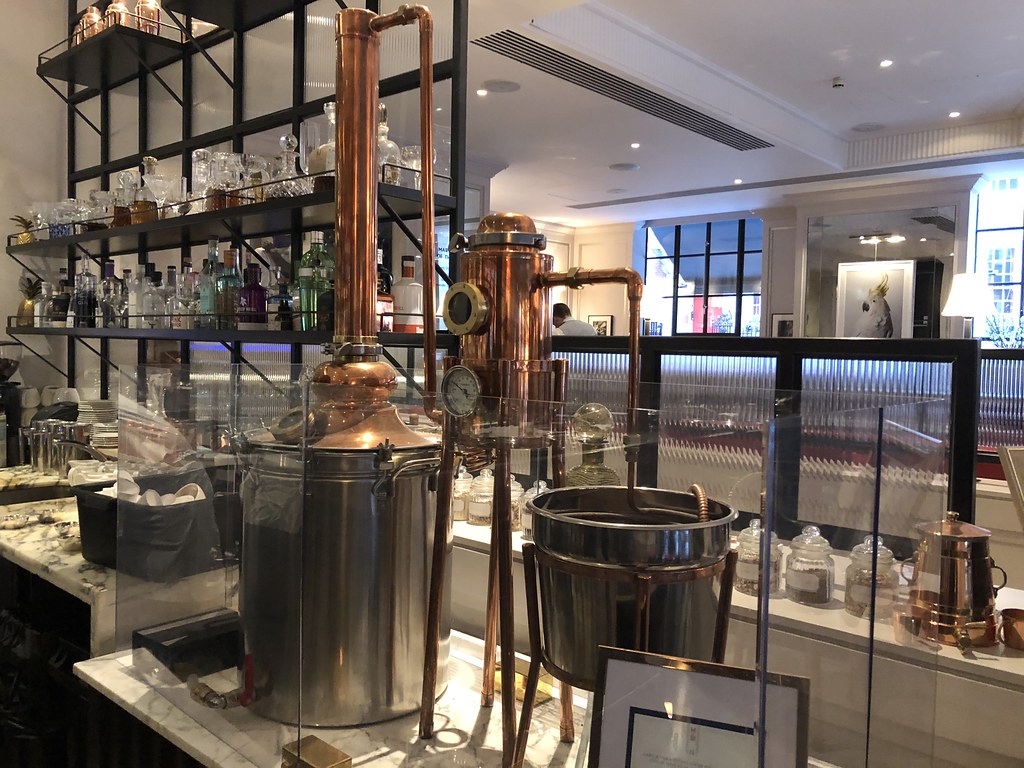 Next up, Old Mary's, a funny speakeasy of sorts. Upon entering it looks like a dive bar but the menu read full of nice classics. We were served a gin tonic sort of cocktail. It might have had St Germain. Things were fuzzy at this point... 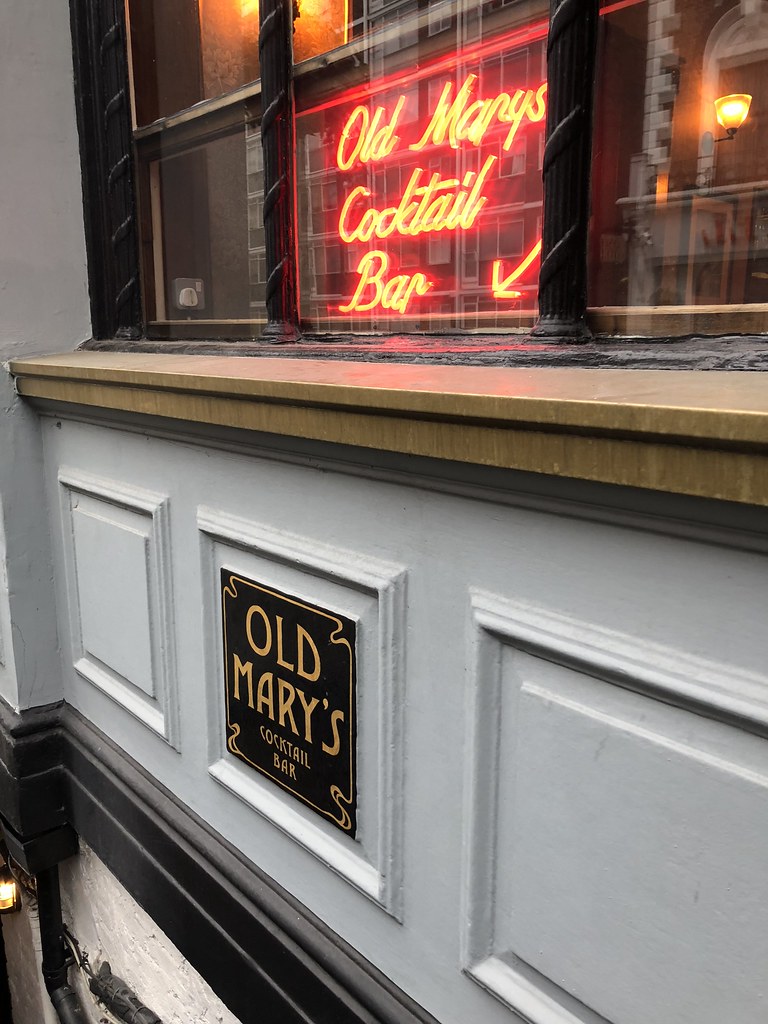 The grand finale was a stop at Trailer Happiness, which I was very much looking forward to! Mickel gave everyone a quiz (but just gave us minis of Martin Miller gin as he knew we would get all the questions right!) and the winners proceeded to drink those minis straight down! The tour guests were really having a good, loud, messy time! 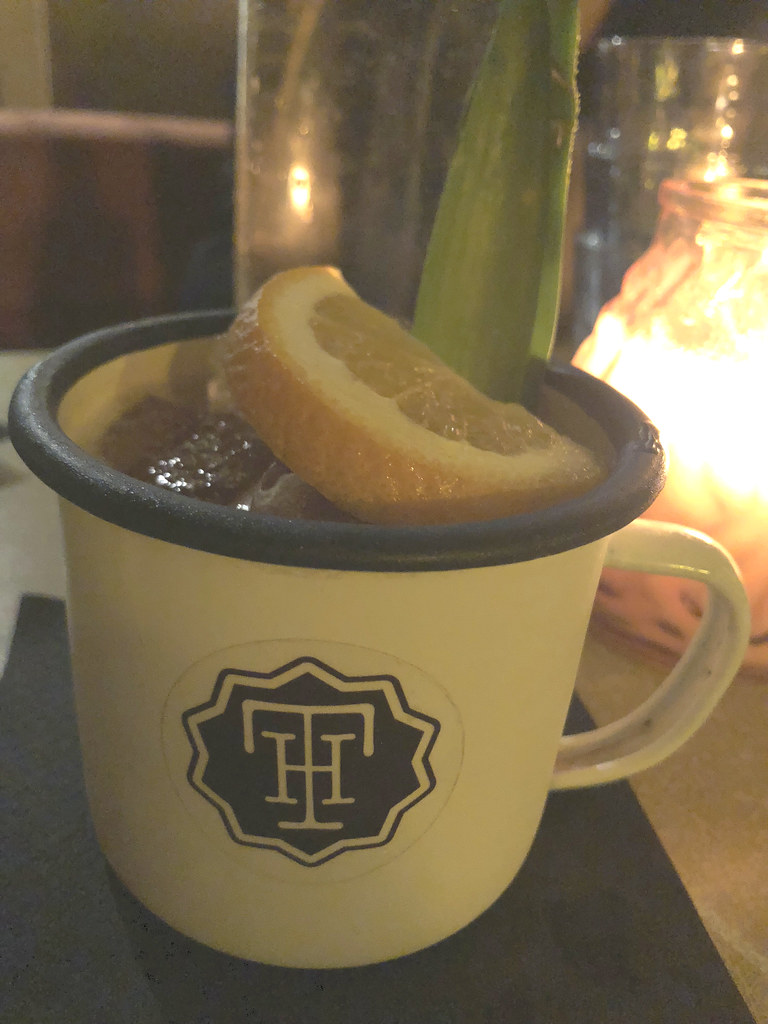 We finished our tour cocktail, got ourselves a table of our own away from the fray, and ordered another round off the menu. This a fun, kitschy tiki bar with lovely drinks. For sure one to visit if you are in the Portobello Road area.

The thing with the Gin Journey was that we rarely had a drink off any of the regular menus (besides a gin & tonic) so it is hard to say how these bars actually are. I don't think the other patrons minded but if you are wanting to really experience individual bars, this may not be for you. If you just want to drink a bunch of gin all day though, sign up now!

We made one more stop, on our own this time, to 9 Lives bar, which was quite near our apartment. Our friend Caitlin was waiting for us there. Shortly after we ordered our drinks, the space went dark with servers wrapping glow sticks around their arms and heads. We thought it was just what they did but turns out they were participating in Earth Hour! It's a cool bar with exposed concrete and indoor palm trees. Our drinks here were excellent, and it was super nice to see one of the great bartenders who use to be at Berners Tavern behind the stick. It was even nicer when he delivered some lovely snacks and a gratis cocktail!

Last day, last crawl. Forest and I were on our own and decided, spur of the moment, to do a "grand hotel bar" crawl. My favorite type! We started at The Ned, which has been recently renovated. 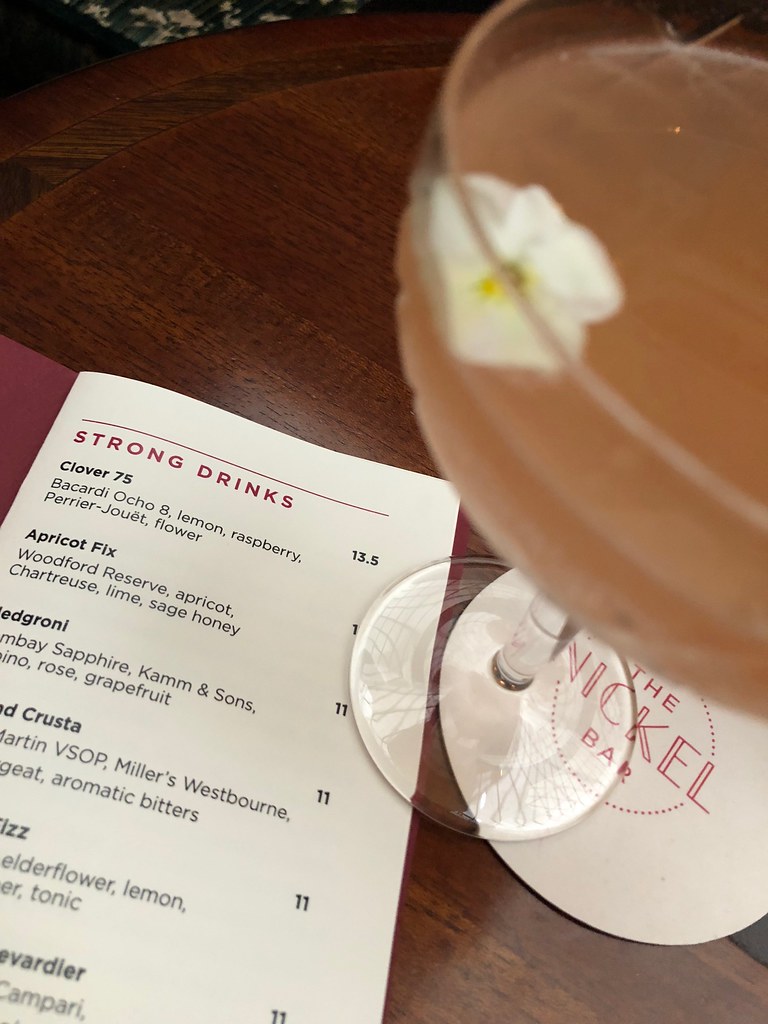 The entire lobby is a bar and on Sunday it was also a multi-station buffet for Sunday Roast complete with live music. Later in the evening it would turn into a swing dance party. The space is beautiful but we had other places to hit so we were one-and-done. 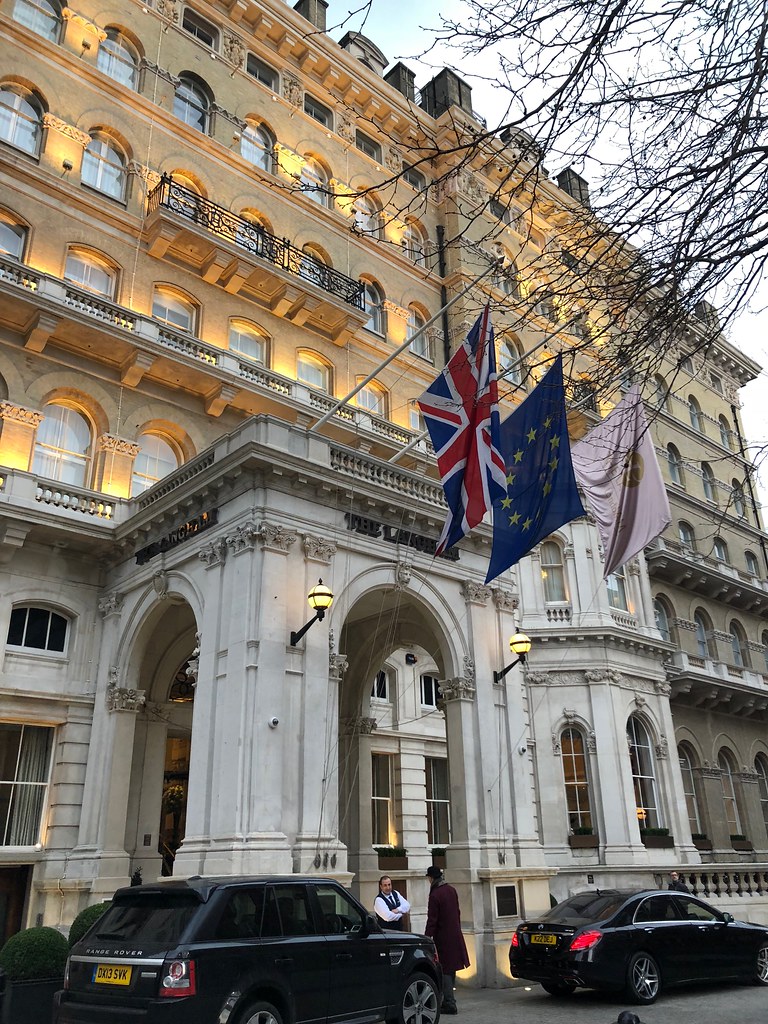 The last time I was at Artesian, I wasn't so impressed. Winner of many awards, the original staff then departed and it was left floundering. Recently though Paris' Little Red Door bar manager Remy Savage was brought on board to revamp the menu and breathe new life. And boy has he. It certainly didn't hurt that Forest and he are friends and he was excited to show us (a lot!) of their new drinks. 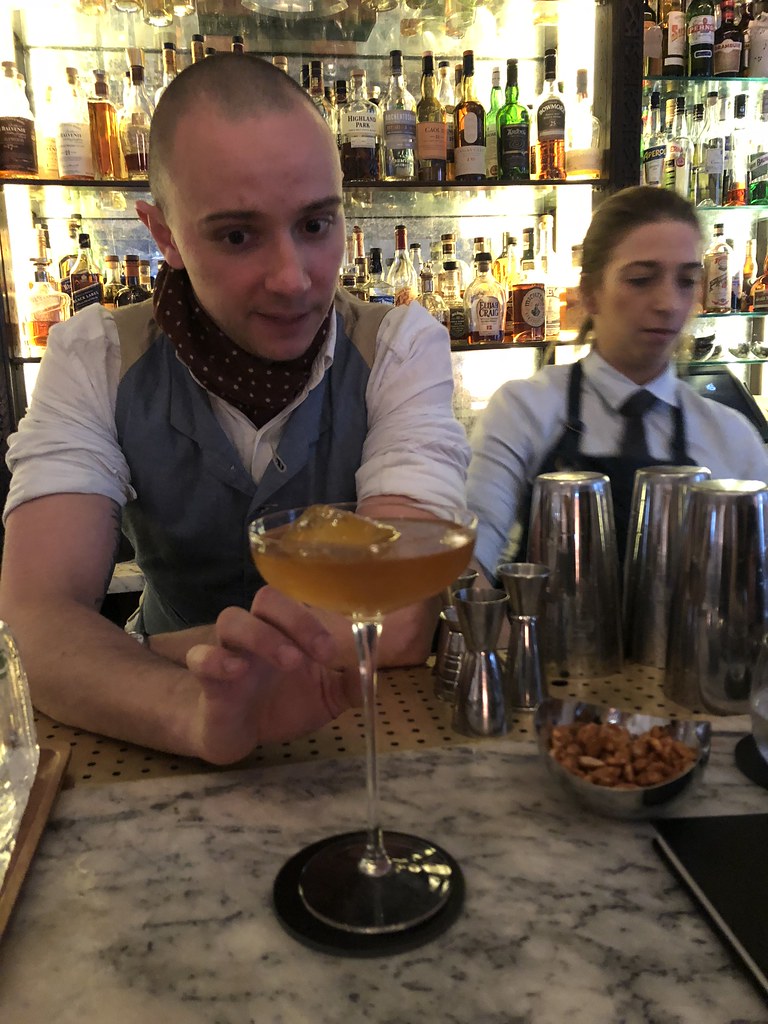 There were so many beautiful drinks, a gorgeous illustrated menu, wonderful engaging service, and even a little tour of their "lab". We had a fantastic time! I see many new awards in Artesian's future! 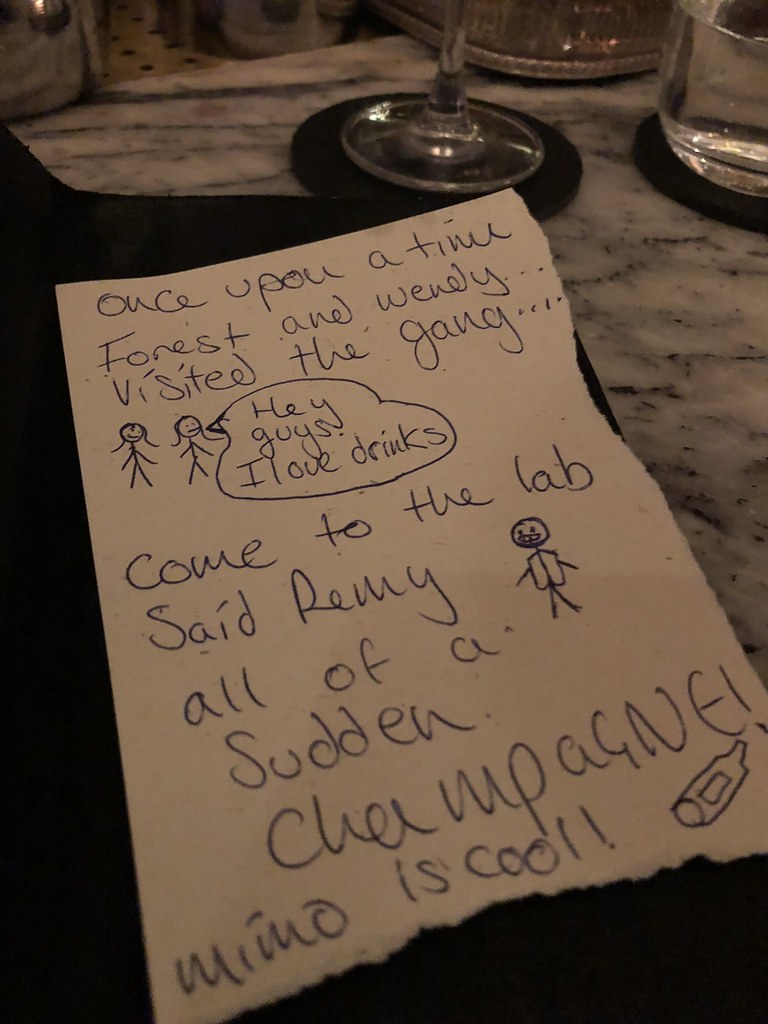 We were ready for some nightcap martinis at this point so walked to The Connaught Hotel and their famous martini trolley bar.  I love this bar so much! It's so pretty, so timeless, and they make a damn beautiful martini! It's also expensive AF! It will continue to be on my go-to list while in London. 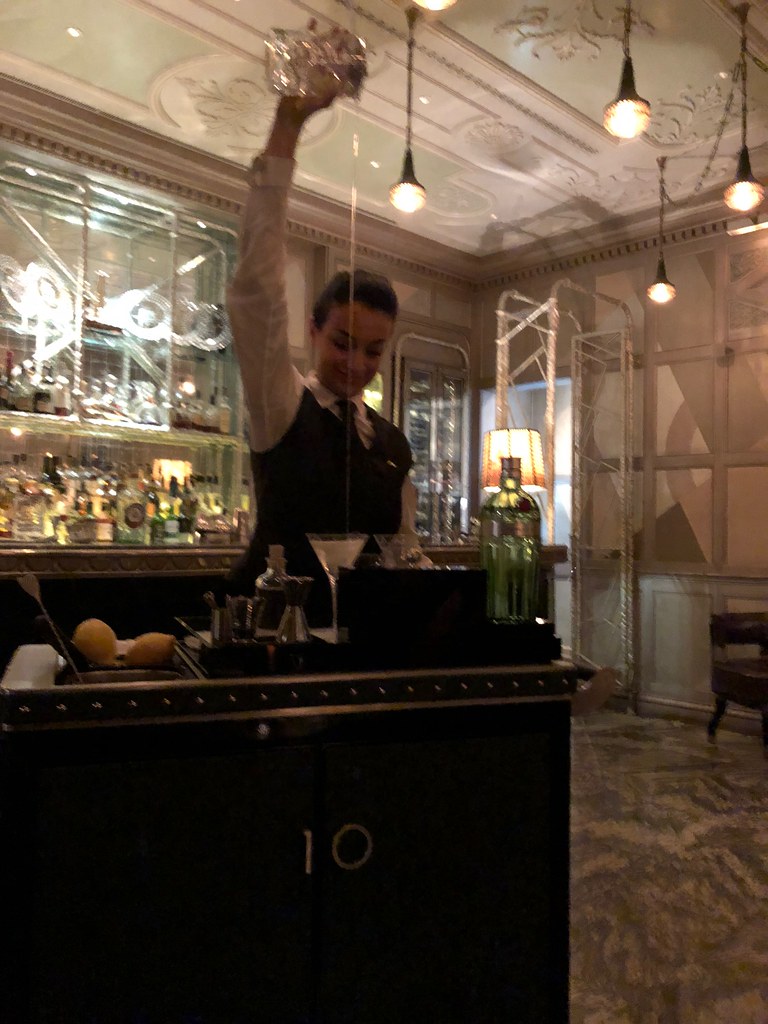 Last stop, Dukes Bar. I hadn't been here before but was very much looking forward to trying out their famous martini, which is reported to have been Ian Fleming's inspiration for James Bond's martini. 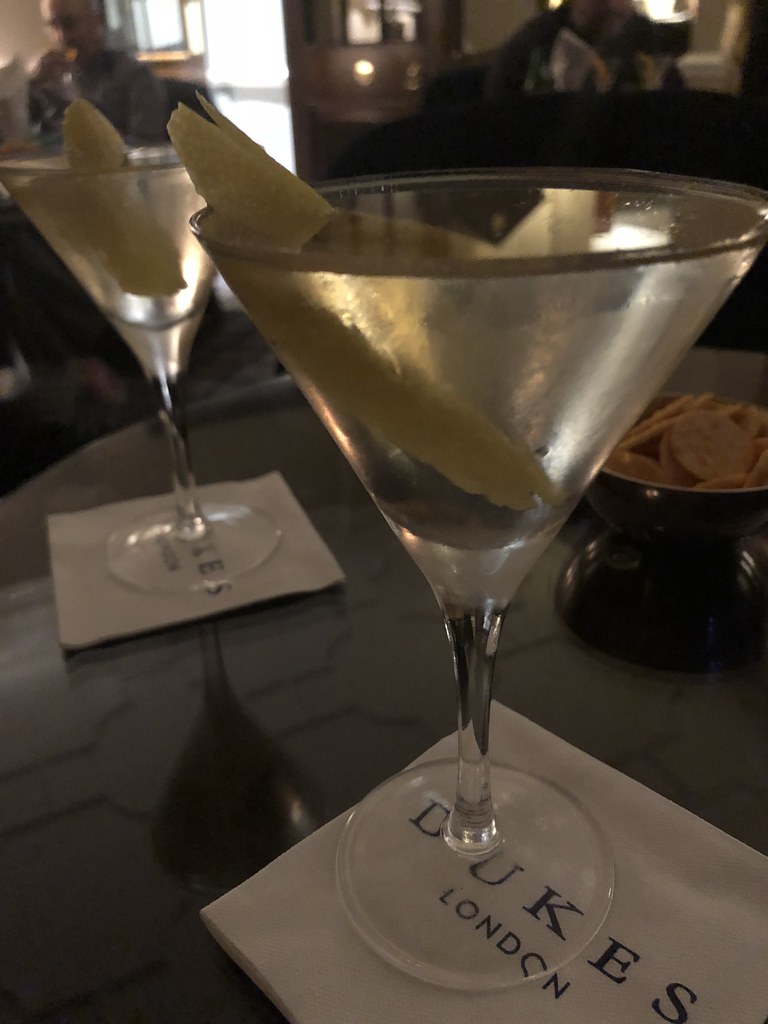 Dukes uses pre-chilled gin, shakes it, and serves it to the brim off their martini trolly. I generally just go for one of those three things. But when in London after all...

Hamilton & Other Hijinks in London
The English Spirit
An Introduction to Unicorns
The 45th
Big Castle, Small Distillery, Highlands
A Slice of Skye
Oban & the Isle of Mull
A Wee Time in Glasgow
at May 01, 2018