An Introduction to Unicorns

Forest and I left London via Kings Cross Station and took an absolutely lovely 4-hour train ride north to Edinburgh, Scotland. I had been wanting to visit Edinburgh for years and was super excited! We'd spend 3 nights in the city and then I'd be taking off on my own to drive around the country, my 45th! 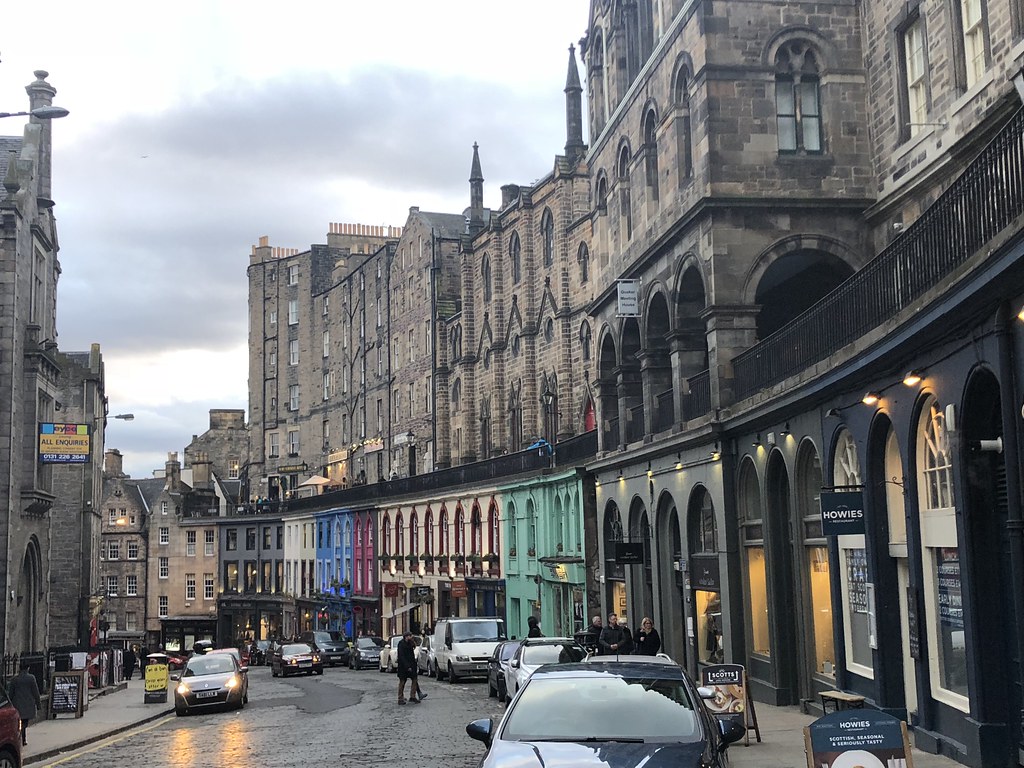 The train ride was very picturesque and we had a great time chatting over wine while taking in the scenery. Unfortunately we had accidentally booked ourselves in the "quiet" car, which for any of you who know me is really the opposite of where I should be! We did our best to keep it quiet but I can guarantee that we had more fun then the rest of the folks around us! 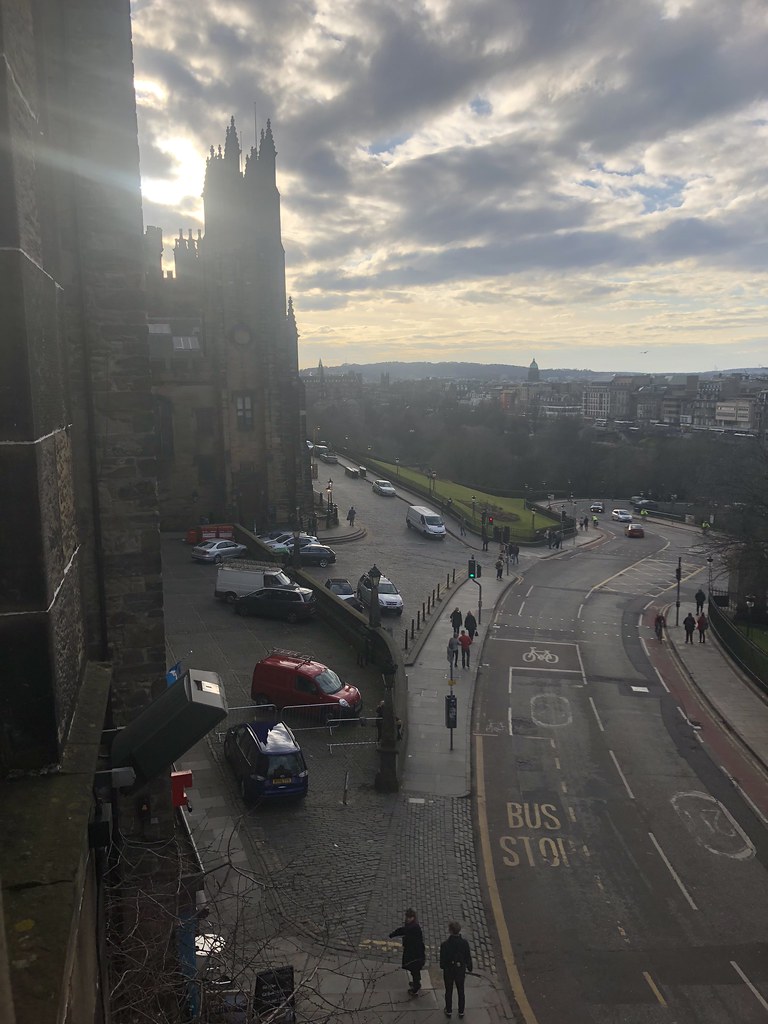 Our Airbnb was just up the hill from the train station, something we didn't realize as we climbed in the taxi. I'm sure he thought we were crazy as he literally drove 2-blocks (but it was uphill!) We had chosen a beautiful, modern 2-bedroom/ 2-bathroom apartment with huge windows which overlooked the city.

We had dinner that evening at The Grain Store, a charming restaurant upstairs in the alcoves of an old building. We started with oysters, fresh out of Loch Crenan on the west coast of Scotland, which were fantastic! I had pigeon for my main, while Forest had beef. Both were absolutely delicious! I'd highly recommend this restaurant; it's comfortable and not stuffy and the dishes use traditional ingredients in a modern style and in a great space. 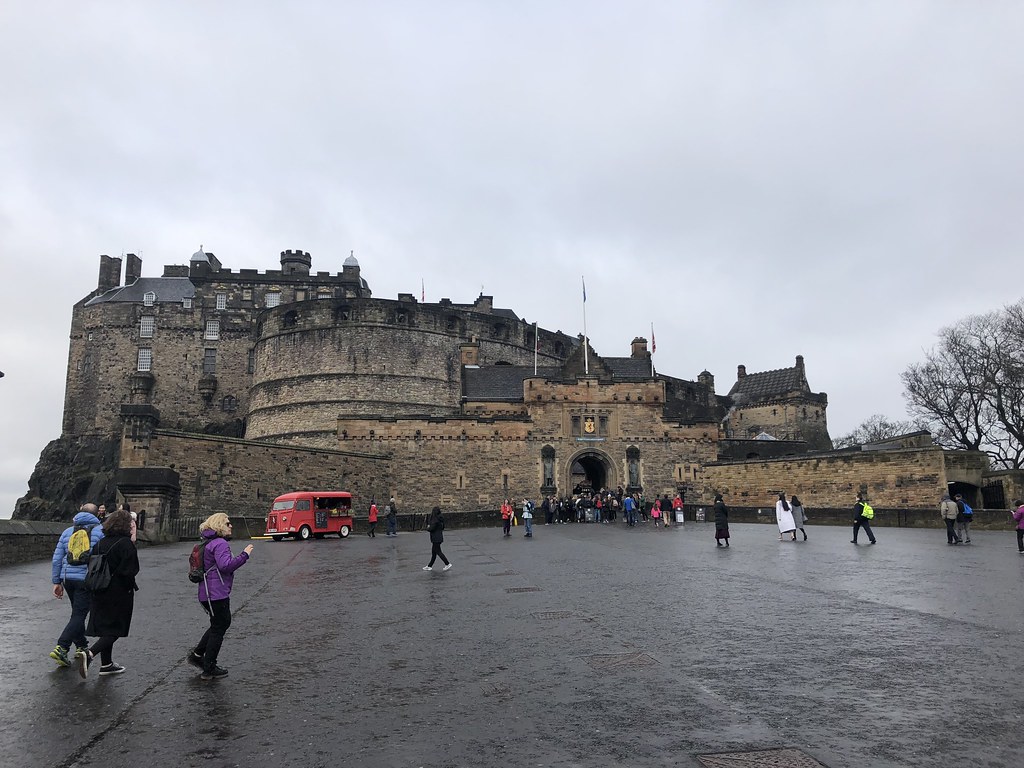 Since Forest had been to Edinburgh numerous times, I left her the next morning and walked 5 minutes over to the castle.

Although it didn't seem that busy, I ended up standing in the queue for tickets for over 30 minutes. I should have purchased them on line as they have kiosks that you can just walk up to and print your pre-purchased ticket. 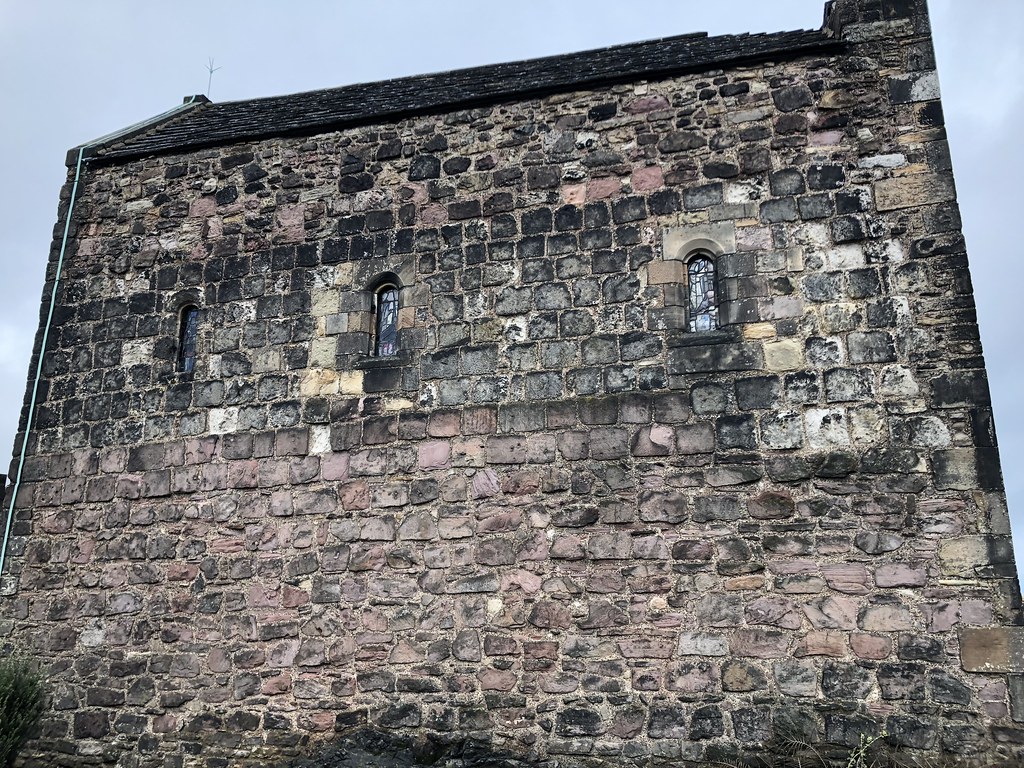 The castle has free hour guided tours so I grabbed a coffee, met up at the designated spot, and had a great time walking around and learning about the castle grounds, history of the city, and the country. I found it very interesting that at night the keys are handed back over to the army who is in charge of the castle (vs the Historic Environmental services who manage the tourism side of it). 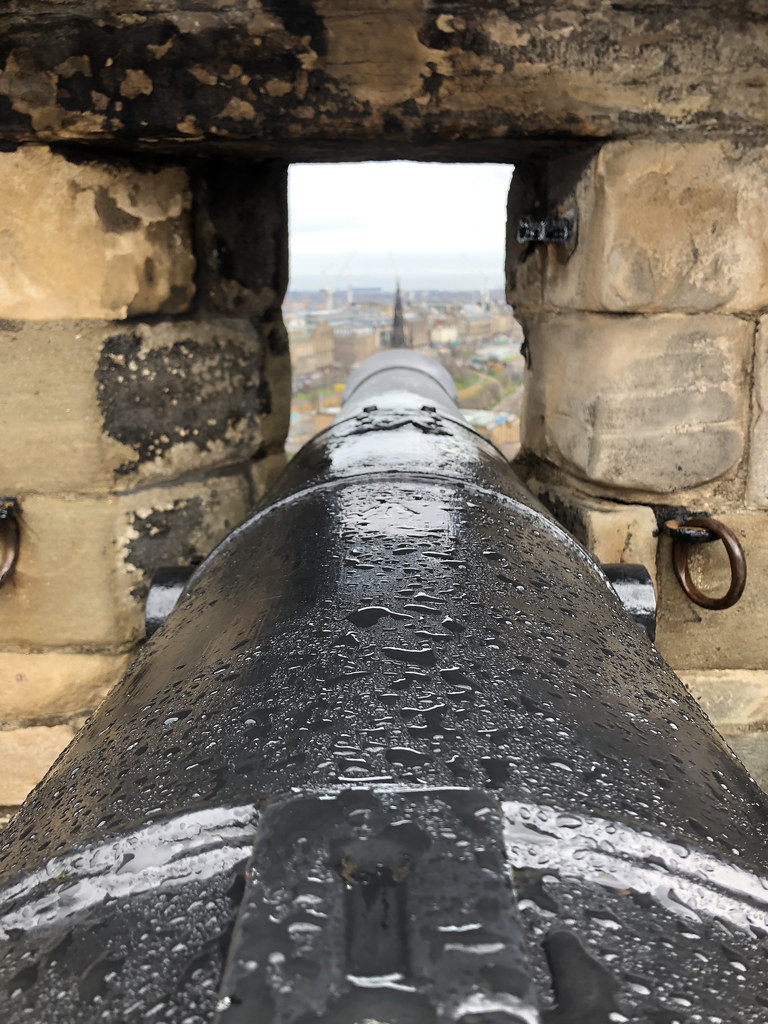 After the tour I headed inside to view the crown jewels (no photos allowed but they are impressive for sure!) and then on to the old prison to check out the barracks. It's quite a complete little city in there, besides just being a stronghold. And the views of the actual city below and the North Sea off in the distance are great! 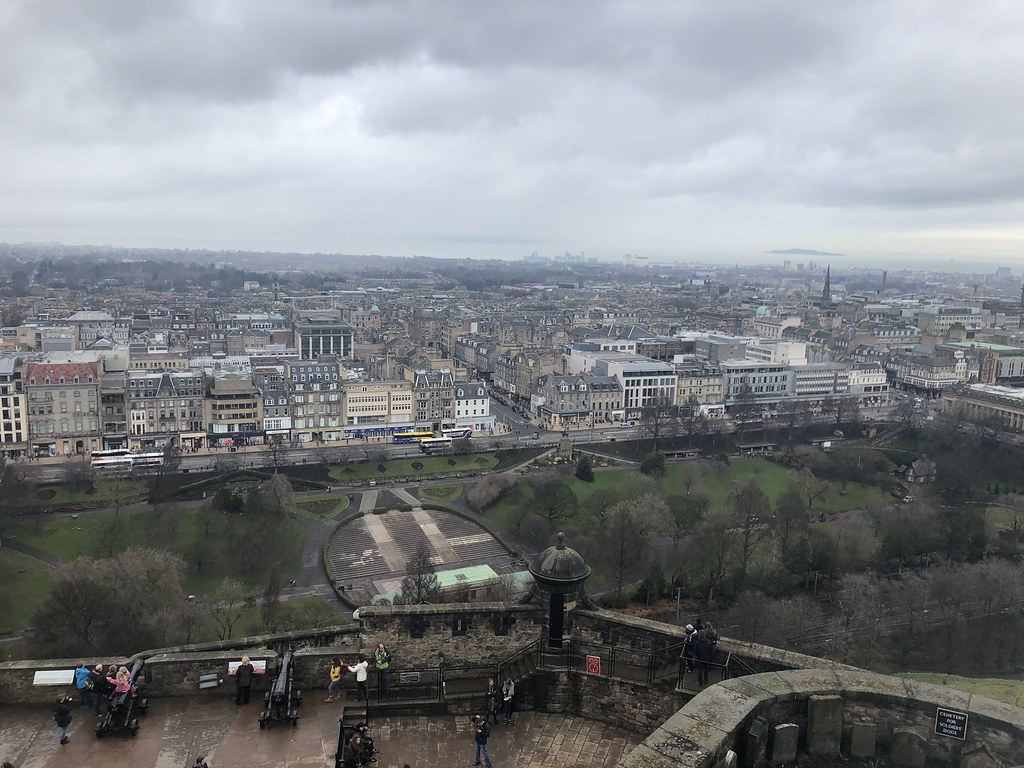 I walked down the hill and met Forest at Timberyard for lunch. The restaurant feels very Scandinavian/hygge with lots of candlelight, beautiful wood tables, and exposed brick from the old warehouse. We chose the 4 course menu for £55. Bread with smoked bone marrow, butter, and some house-cured charcuterie started us off. 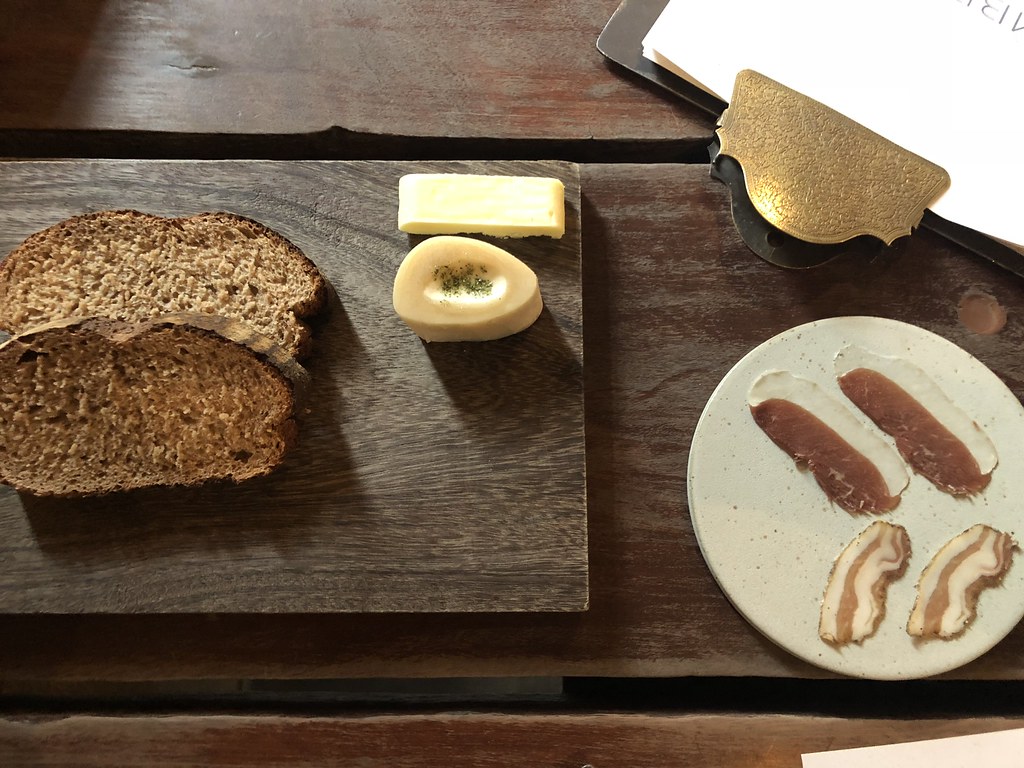 Lunch was very good as was our service. Forest and I didn't agree with all the wine suggestions but that's ok! At night, I'd bet this restaurant is very dim, hip, and sexy! 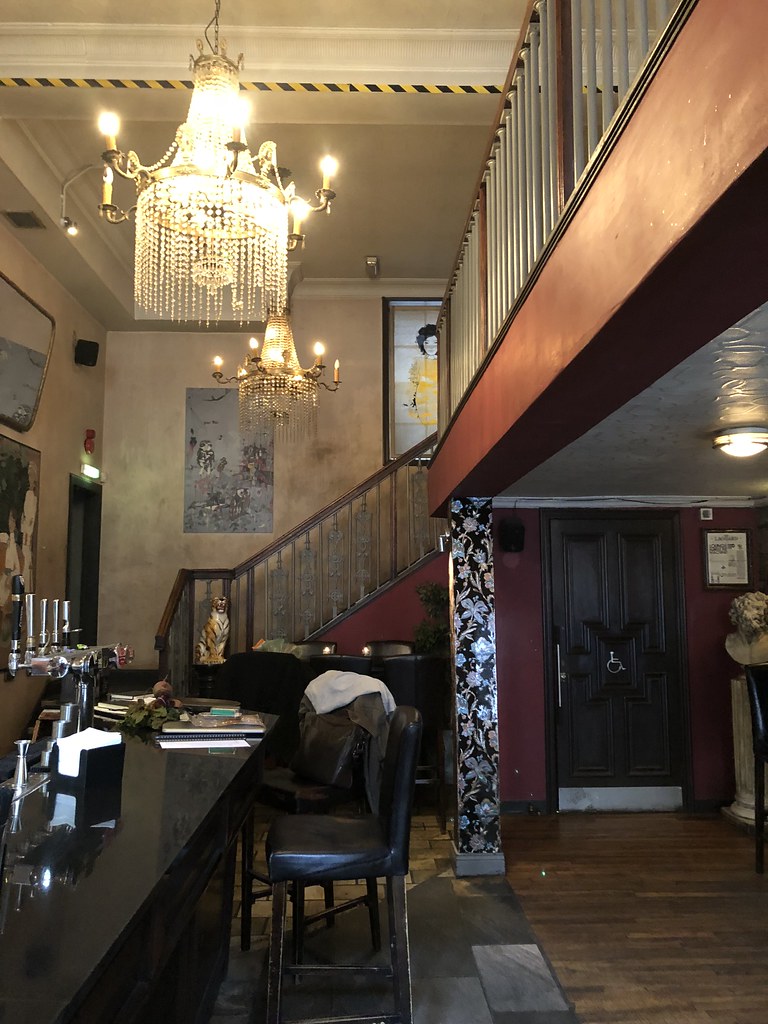 On our way to walk to Grassmarket and the Royal Mile, we made a quick stop at Dragonfly, a very cute little cocktail bar. The drinks were good, the selection of booze was a tad on the cheap side, but the bartenders were super nice and gave us lots of good drinking advice. 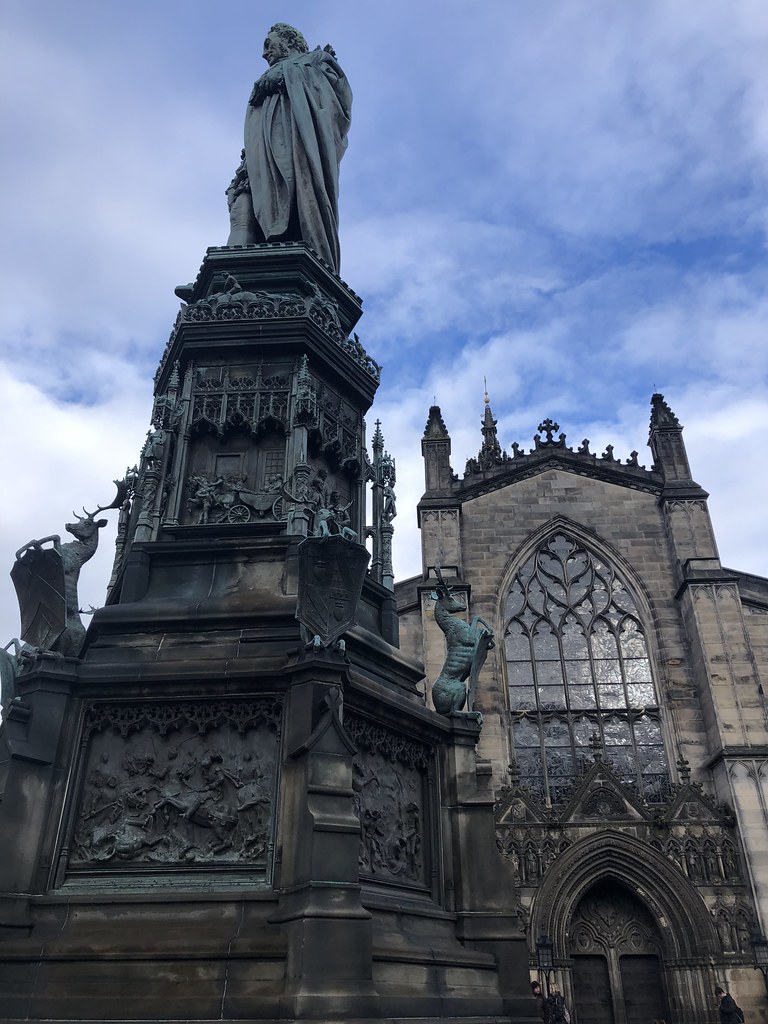 The Royal Mile is filled with tourists, shops selling cheap plaid clothes, historical buildings, closes, statues, pubs, etc. Some of the highlights are Gladstone's Land (one of the surviving original tenements of the city), Parliament, the site of the last public execution, St Giles Church, a statue of the great thinker David Hume, and unicorns. UNICORNS??? 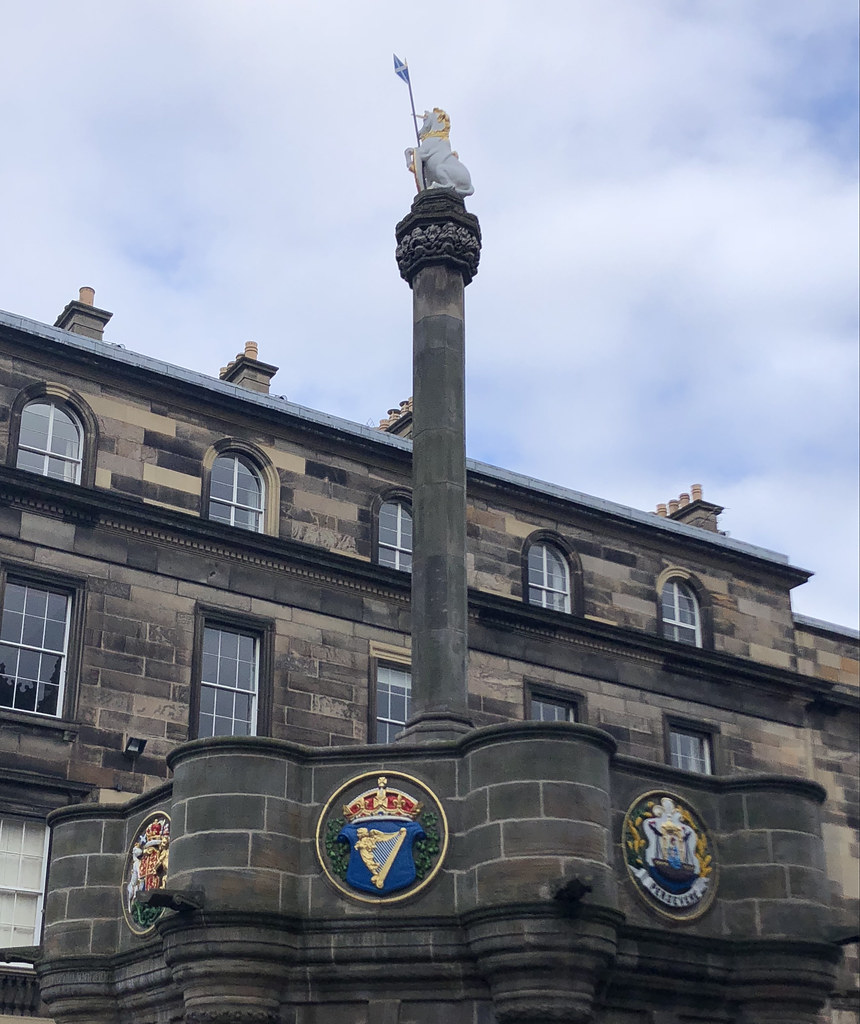 The unicorn is Scotland's national animal and when it was chosen much of the world believed in their existence. Use of the animal's image goes back to the 12th century. Pharmacies use to sell powder that they claimed was from unicorn horns until 1741. There are many ideals on the iconology of the unicorn, from having magical powers to representing the incarnation of Jesus. I hadn't know any of this! 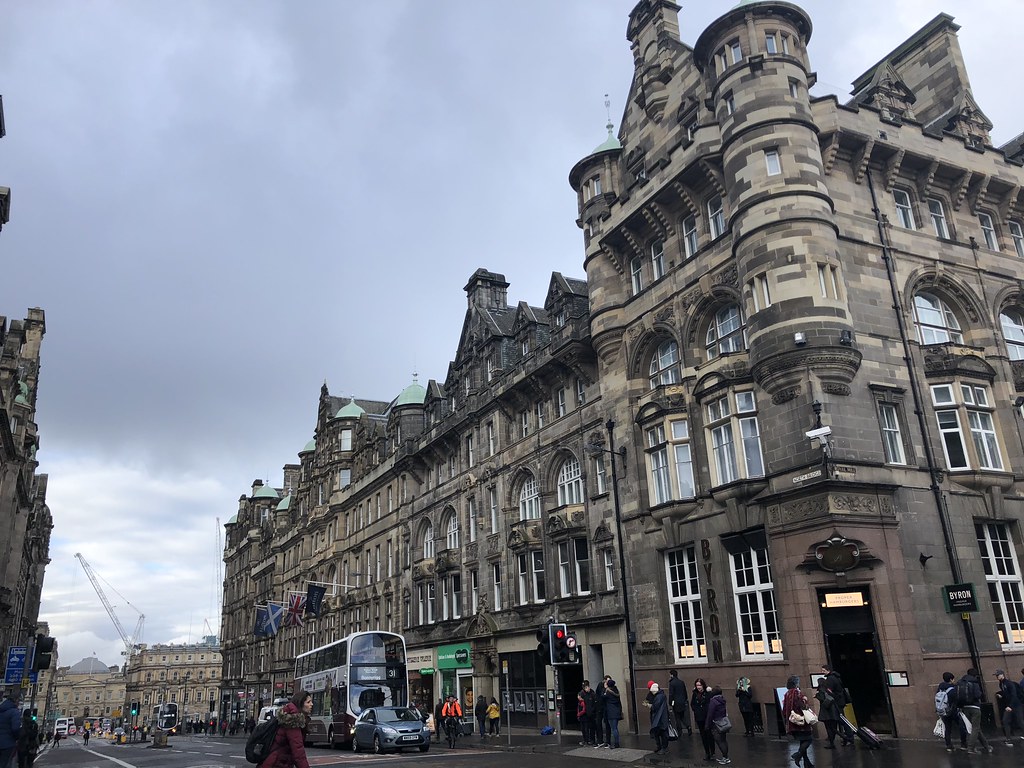 So shocked by our new unicorn knowledge, we made our way Under the Stairs for a happy hour drink. You kind of feel like you are in someone's living room here. The service again was very friendly, the drinks were fine, and it would be a cute casual spot to meet a bunch of friends and hang out. It's not what I would consider a cocktail destination. 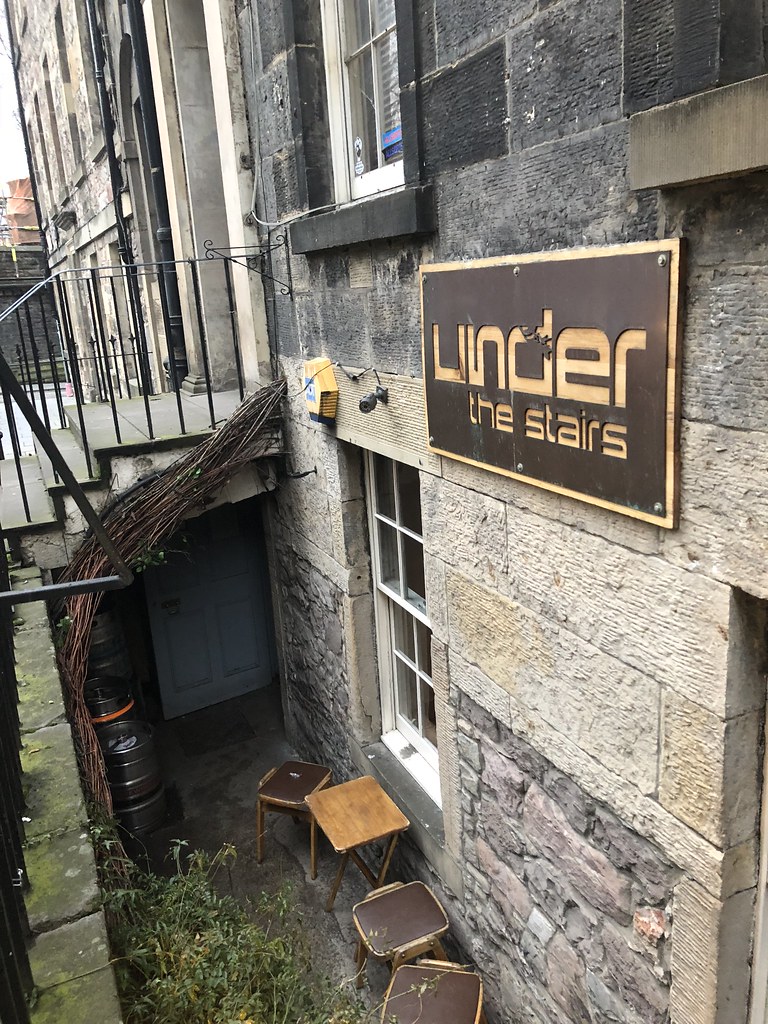 We grabbed an Uber and had a quick 10-min drive to the harbor neighborhood of Leith where we were having dinner at The Kitchin. The restaurant and bar are absolutely lovely, a bit posh but not stuffy. We started with martinis, as it was time to start trying all the different Scottish gins (Rock Rose for me, Verdant for Forest), and some delicious snacks while we perused all the menus. We finally decided on the Chef's Surprise Tasting Menu with 7-courses for £85. We added in the wine pairings and  cheese course. 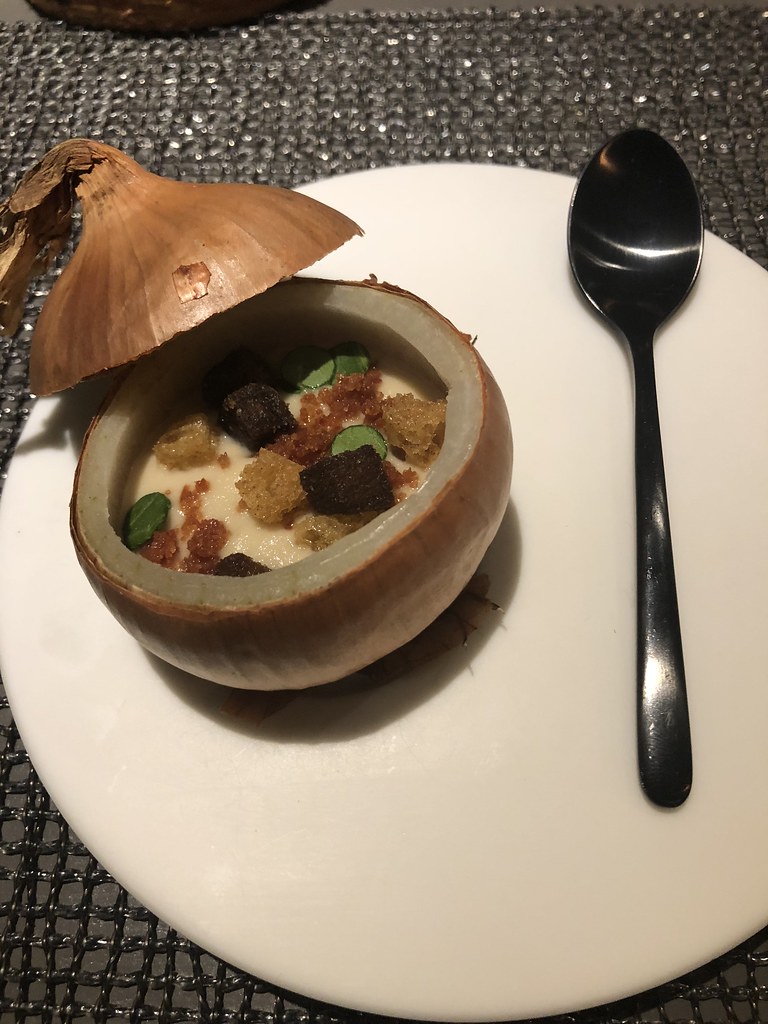 We thought everything was very good and the presentation was fantastic. Service was great but a tad rushed. Some of the wine pairings were a bit strange to us (like going red with duck but then back to white for the halibut) but all in all I thought it was a very nice dinner. 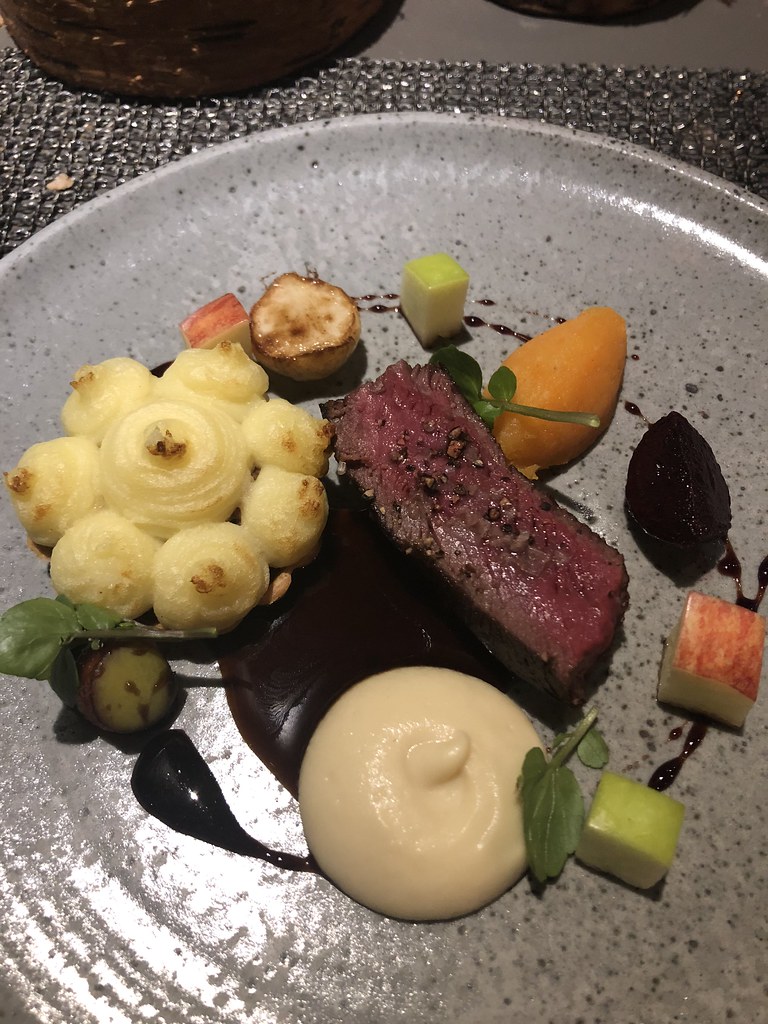 The cheese trolly was impressive and since neither of us knew much about British cheese we let the waitress lead us and we were not disappointed! 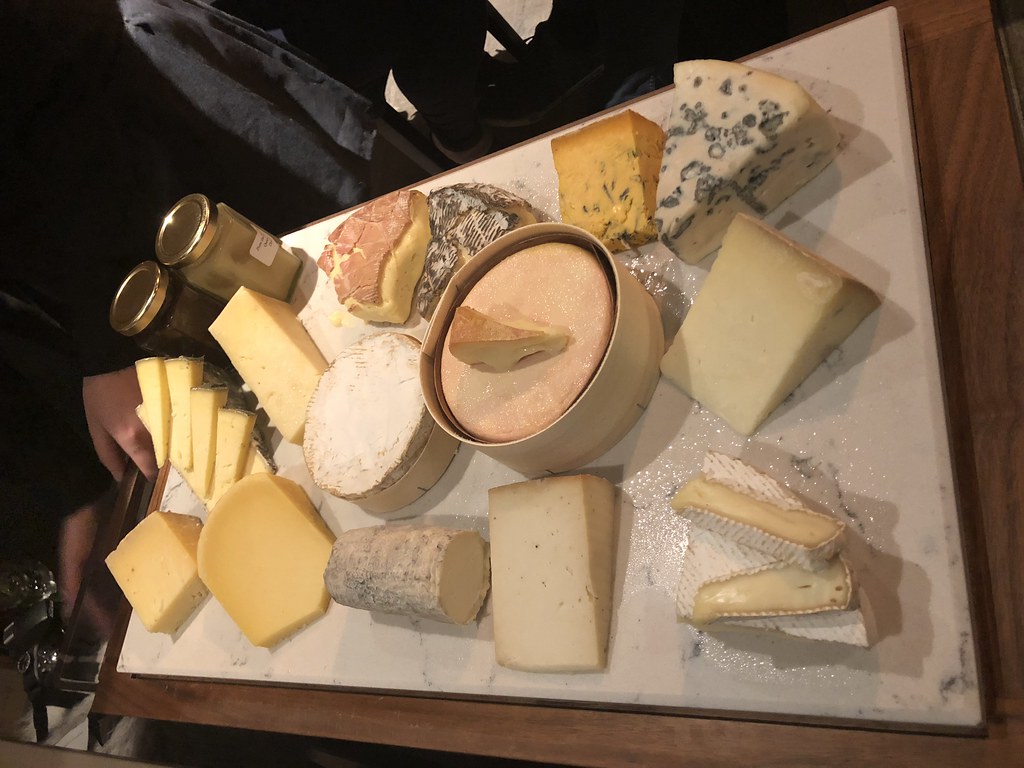 We headed home and hung out with a bit of wine taking in the pretty views from our apartment.

A fantastic day in Edinburgh, I was excited for the next one! And my breakfast of that shortbread! 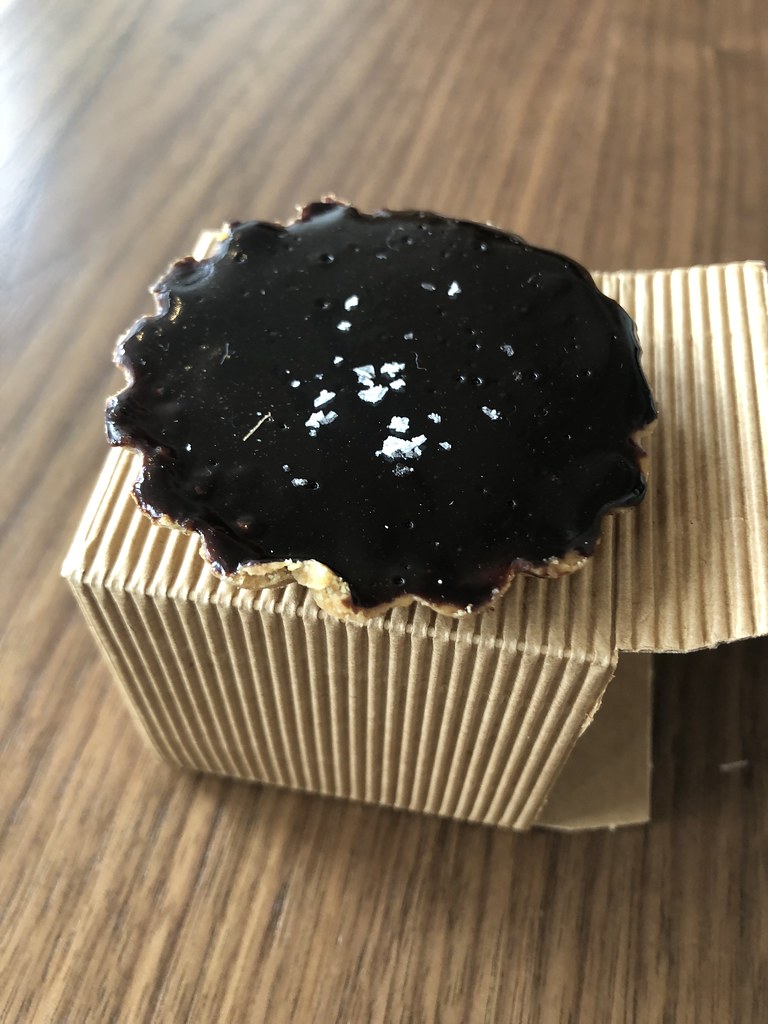 Hamilton & Other Hijinks in London
The English Spirit
The 45th
Big Castle, Small Distillery, Highlands
A Slice of Skye
Oban & the Isle of Mull
A Wee Time in Glasgow
at May 11, 2018