The main reason for Aaron and my trip was finally insight. We left Copenhagen and flew 2-hours to the remote Danish territory of the Faroe Islands on Atlantic Airways. There weren't direct flights everyday to or from the islands, so our itinerary was dictated by Atlantic's schedule. 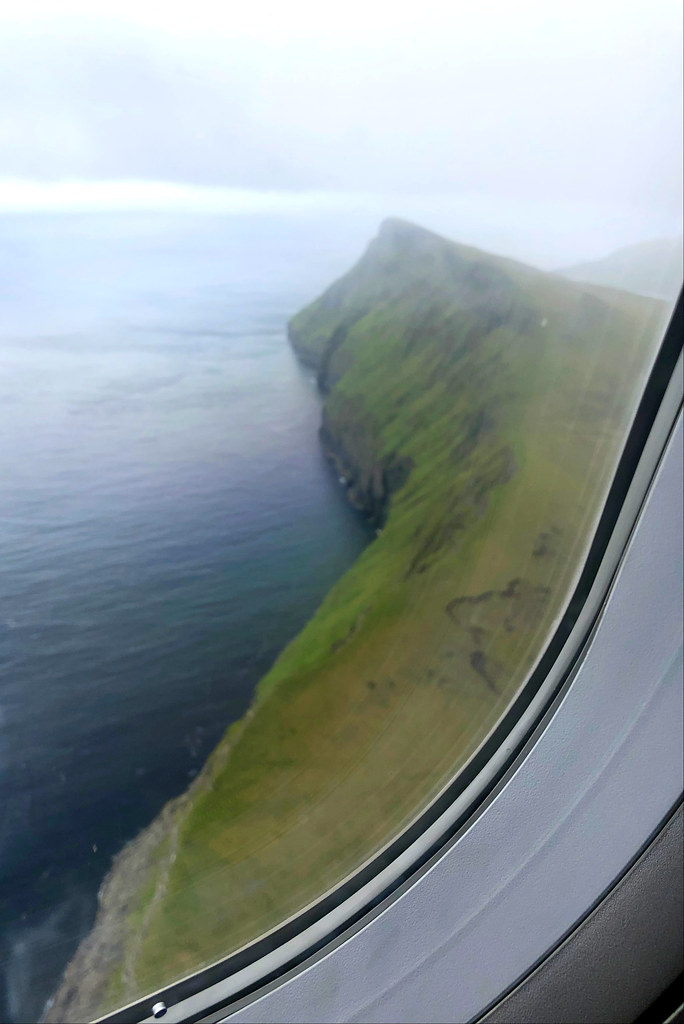 For those not familiar, the Faroe Islands are north of Scotland and about ½ way between Iceland and Norway in the North Atlantic sea. And if you sit on the left side of the plane, coming from Copenhagen, you will have a very cool view of them.

There are 18 islands that make up the territory, ranging in population from 0 to 24,000.  We landed at the airport which is on Vágar Island early afternoon and picked up our rental car from Avis in the adjoining building. PSA: only manual cars were available when we were there. 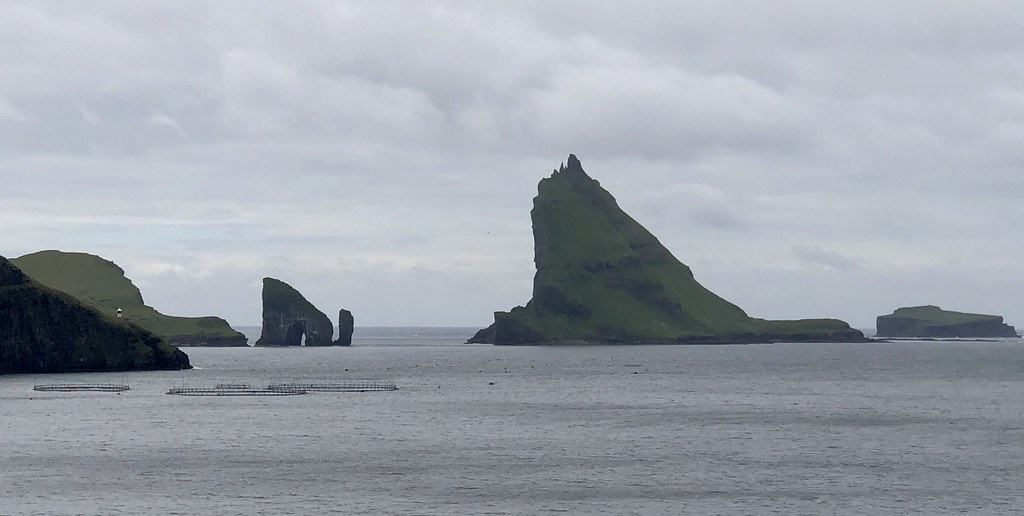 We had researched our hiking options thoroughly as weather would determine most of our plans, and also the hiking on these islands ranges from tough to holy-hell-what-the-F! Immediately upon leaving the airport we headed to start seeing the sights. The first was the islet of Tindhólmur, an impressive rock with 5 jagged looking peaks, Ytsti, Arni, Lítli, Breiði, Bogni. We were able to easily pull over on the side of road to enjoy the view. 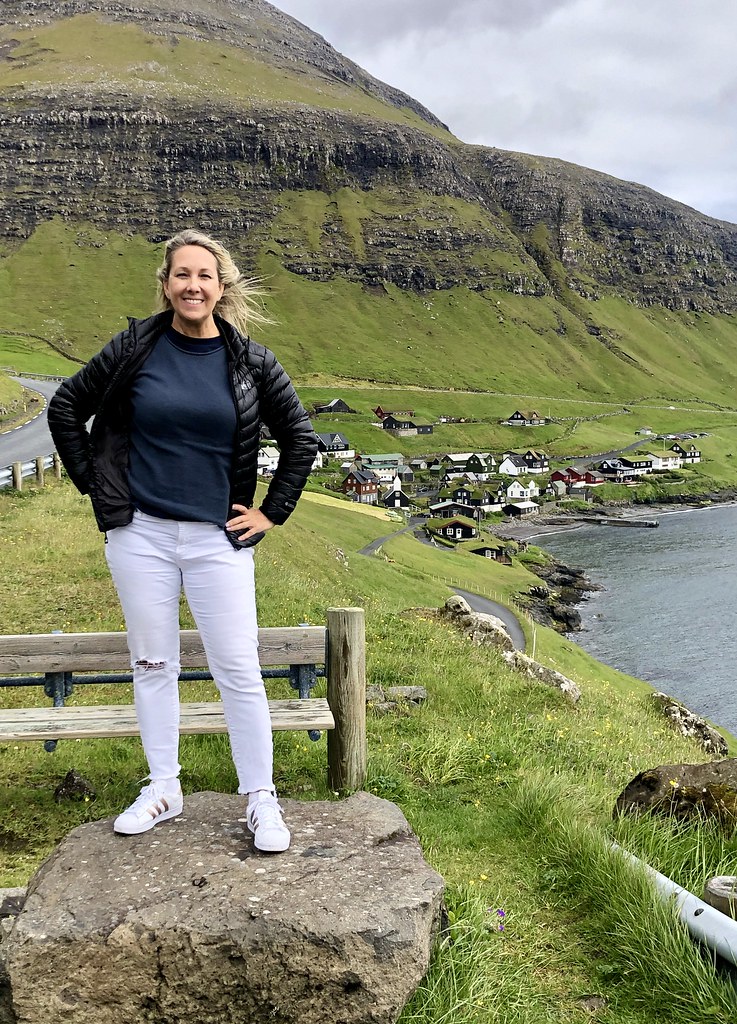 From here we continued on the only road, and through a completely dark 1-track tunnel (!!!), to Gásadalur. This tiny village was pretty much cut off from the rest of the islands until the tunnel was drilled, so even though it is scary to go through, it's a big deal to them.
We parked along the side of the road when we saw a gravel road on the left as we had read. We spotted the small white building in the background, confirming that we were on the right path. But then when we got out of our car and started walking down the path we took a slight right, towards the village, instead of the left that we should have. 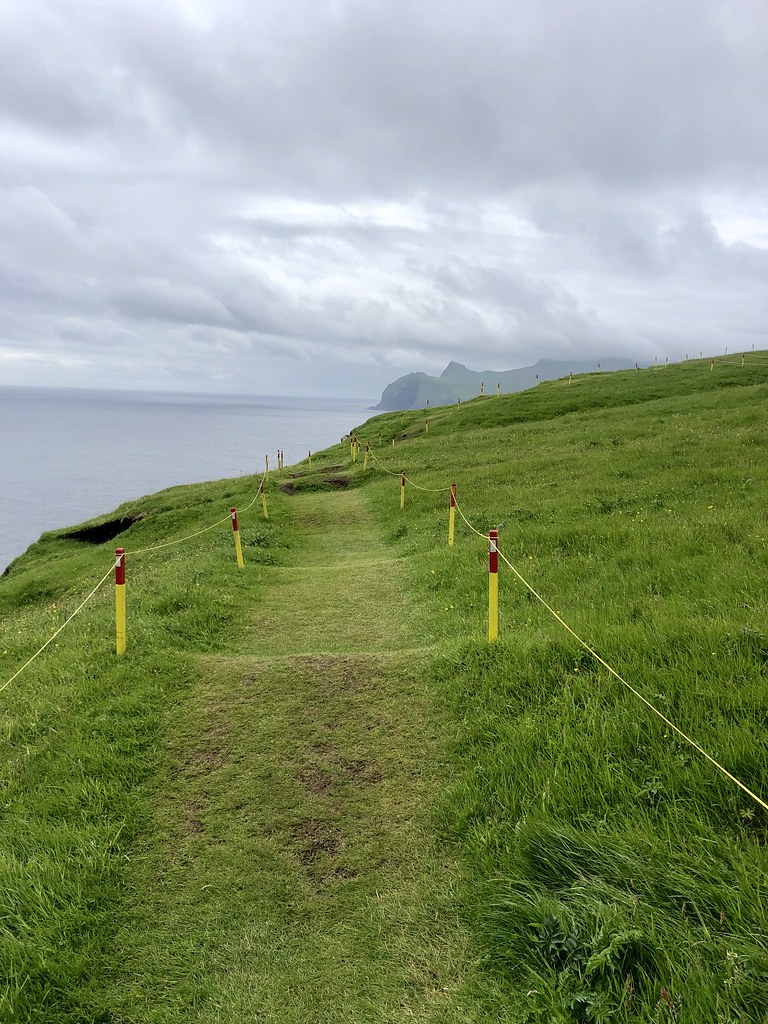 So we did a little extra hike on a very remote trail. You can see that they have started to cordon off the trails to keep the new surge of tourists from trampling the earth. Although there weren't many people out there that day, I can imagine that this will be an impact to the area soon.

We backtracked down the trail, passed the village on our left, and made our way to our original destination... hello gorgeous Gásadalur Waterfall!!! 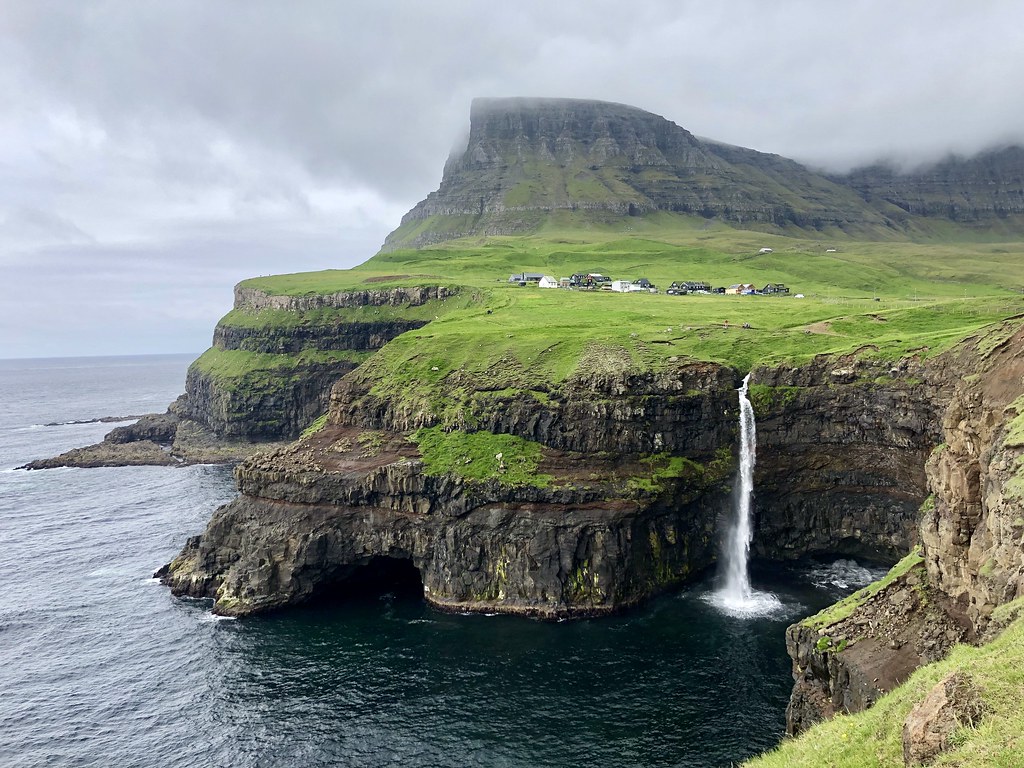 We had had a fantastic taste of the beauty of the islands in our first few hours and now were even more excited for our hike the next day!

The capital of Tórshavn, which is where we were staying, is on the island of Streymoy and was a 1-hour drive away. The next morning we drove back out to Vágar to catch a ferry at Sørvágar for the island of Mykines, aka Puffin Island. 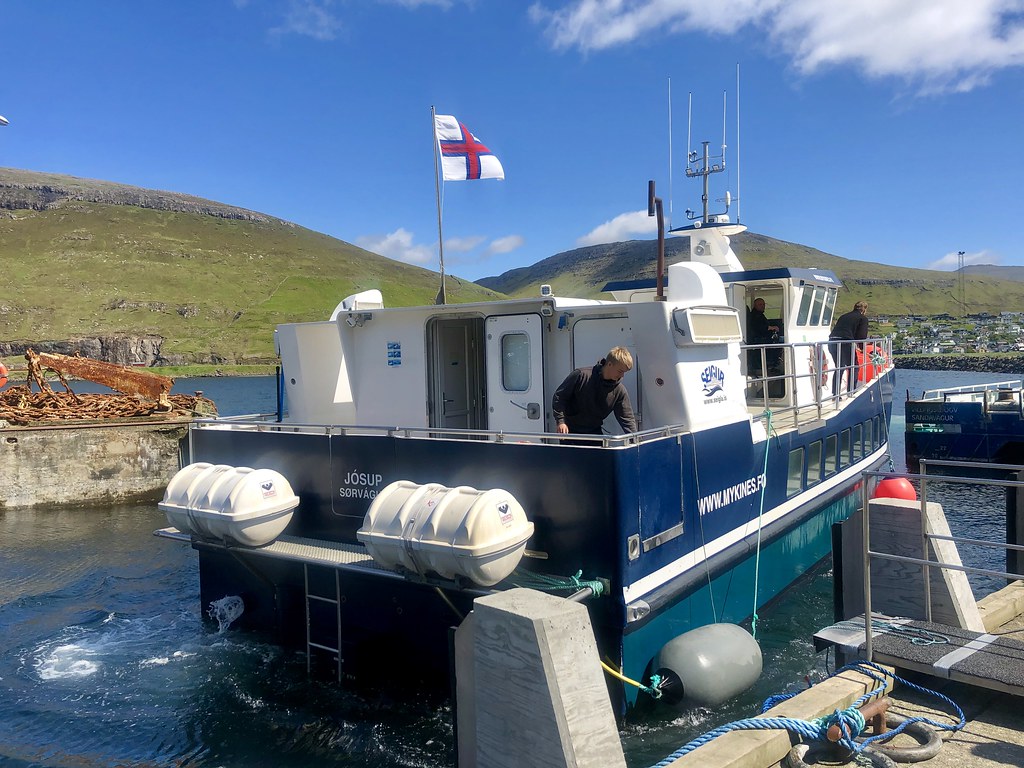 There are two ways to get to Mykines, ferry or helicopter. In the Faroe Islands helicopters are used like taxis to get between various islands. You book thru Atlantic Airways for about $30 one-way. Unfortunately, tourists are only allowed to book one-way trips to make sure that there is availability for locals. So we were taking the ferry, which honestly I was fine with as I'm a bit terrified of helicopters! 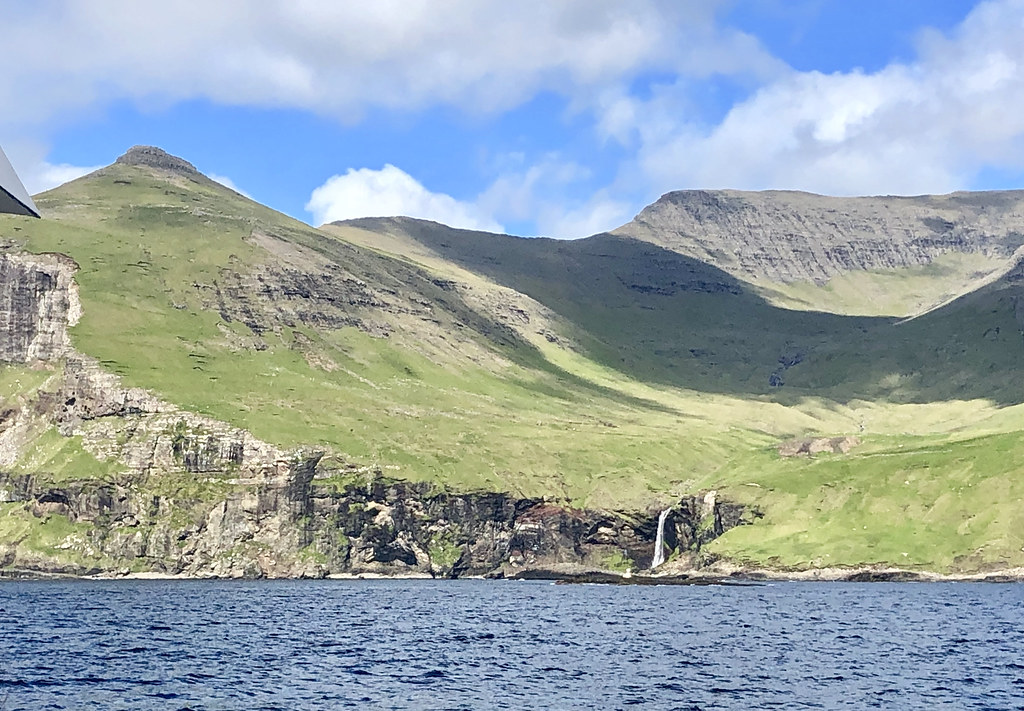 You must book your ferry tickets weeks in advance to get out to Mykines and most trips end up being canceled because of weather. We decided to try for this hike on our first full day so that we would have a few days to rebook if needed.  This site was a great resource for info. But we were in luck as the weather was beautiful and I do love a boat ride! 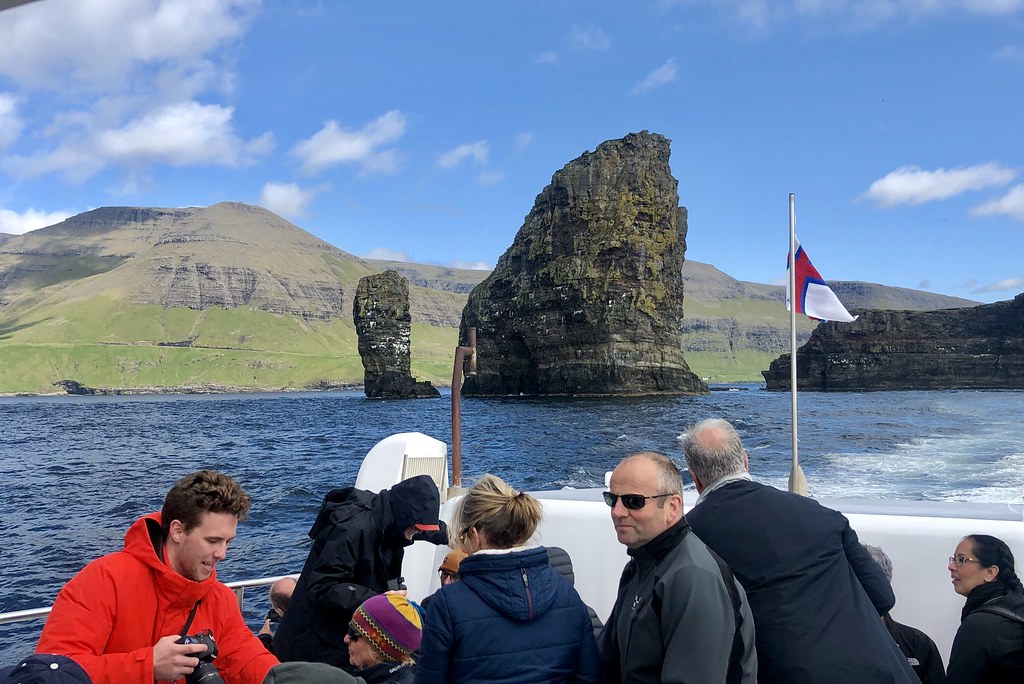 Even with good weather, the sea was rough and the ferry is small. We started with seats downstairs where we had a little snack of things we had purchased before leaving Streymoy (there are VERY few stores around the islands so it is important to bring your own picnic when hiking). I spent the rest of the 40-minute trip up on deck. 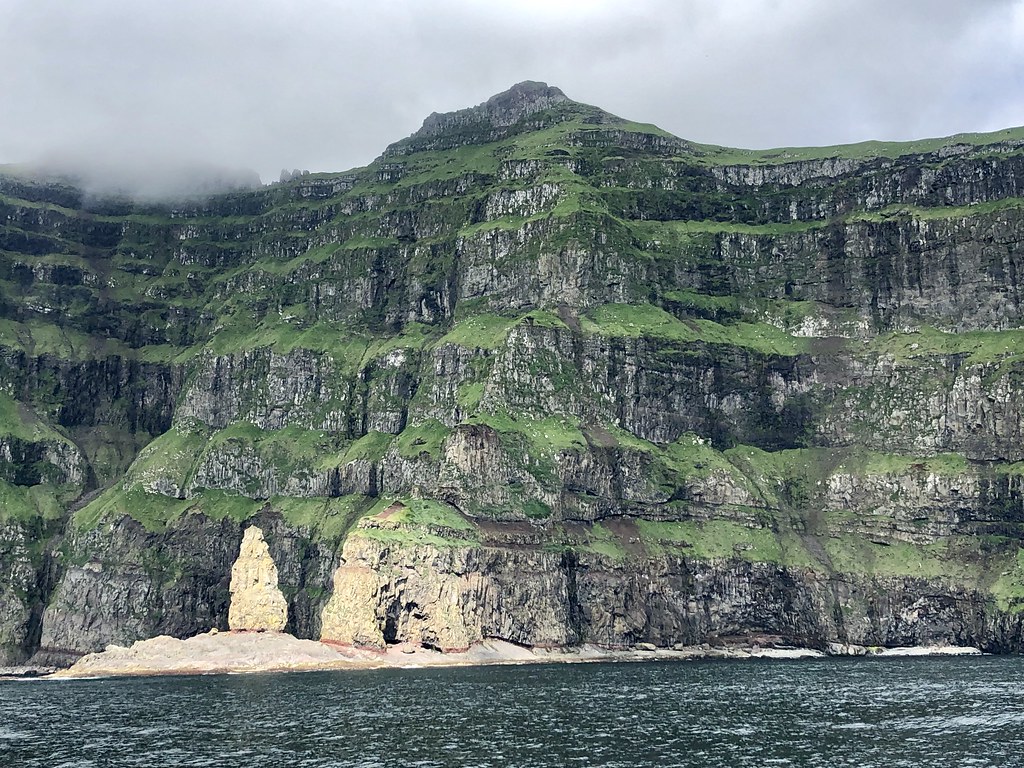 There are a few different trails around Mykines and a good map right in town that shows them and the estimated time for each. We were doing the route out to the lighthouse, the trail leaves right from the village. It's a steep uphill right from the beginning of the hike but the scenery is so gorgeous that you can get lost in it. And as soon as you get up the first part you feel like you are on a cliff on the edge of the world. Well, you kinda are! 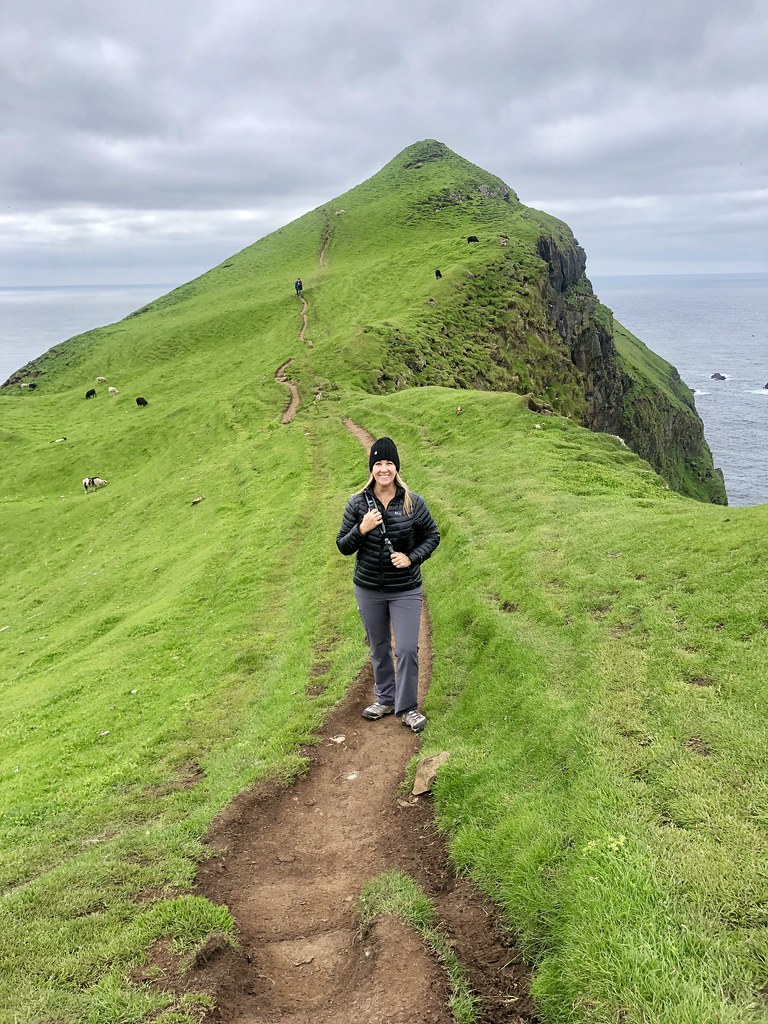 We also started seeing puffins and sheep right away. Pretty much everywhere! The sheep look like they are magically stuck to the hillsides while the puffins pop up out of their grassy nests. 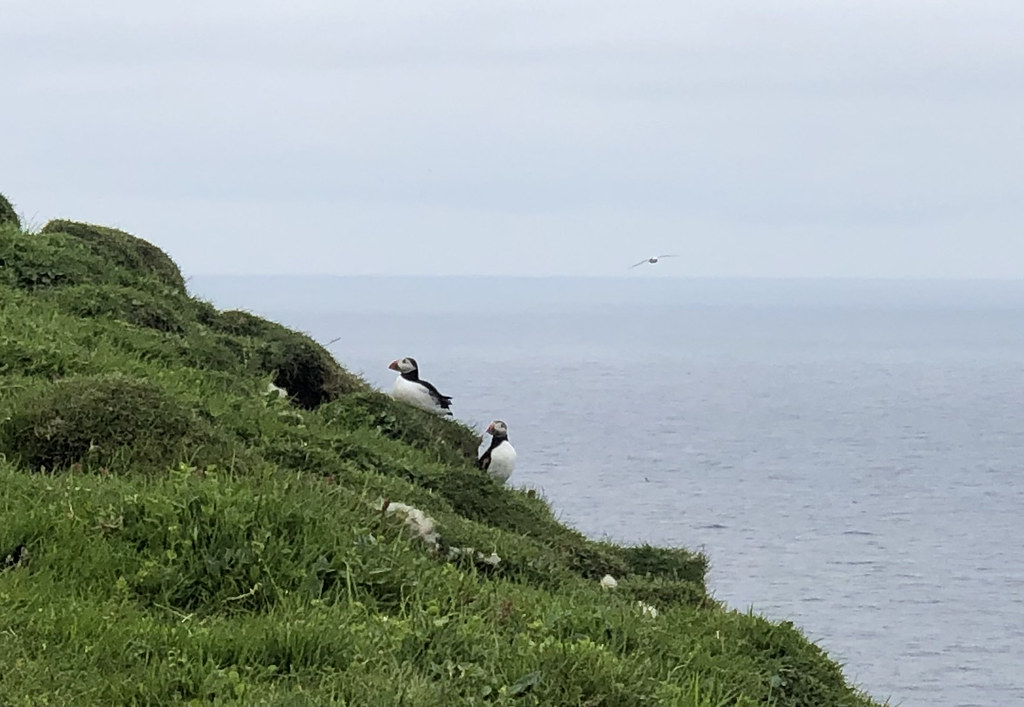 Most of the trail is pretty well marked and clear. We did come to a spot where we had to descend some pretty steep, narrow, and slick wooden steps that made the edge of the cliff seem closer than it actually was. When we arrived at the main puffin nesting grounds there was a gate and a ranger who was keeping track of the number of people hiking through the area at a time. He informed us that we weren't to stop during this part of the trail as it would cause a backup. This was to help protect the puffins who certainly aren't use to tourists! 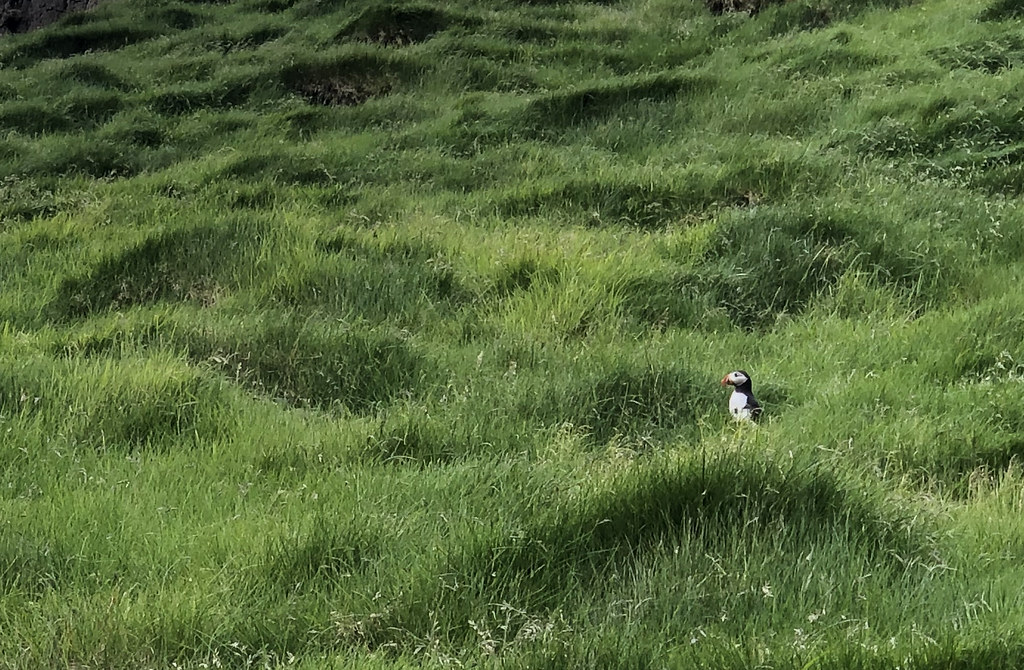 Even without stopping you see the puffins everywhere, clustered on rocks, flying through the air, and again popping up from grass burrows. They are adorable!!! 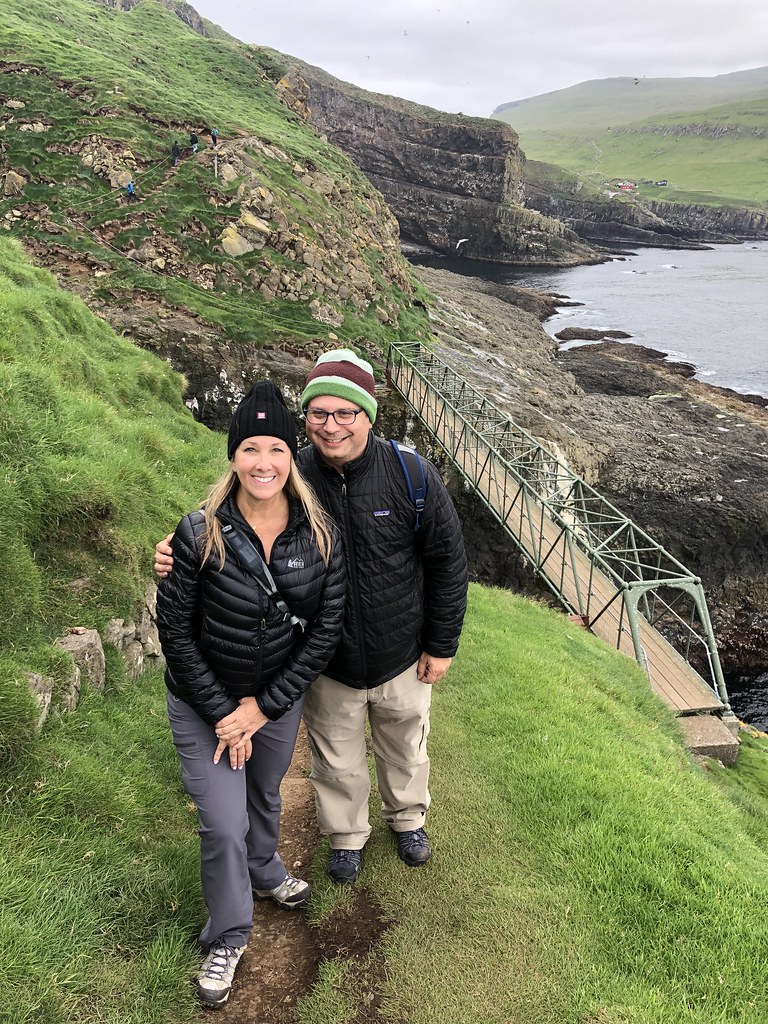 Once you are through the breeding grounds there is a bridge to cross a deep ravine where you can see hundreds of sea birds nesting in the rocky cliffs. The bridge is solid metal but when we were there someone was having quite a nervous episode about crossing it. It is quite high. 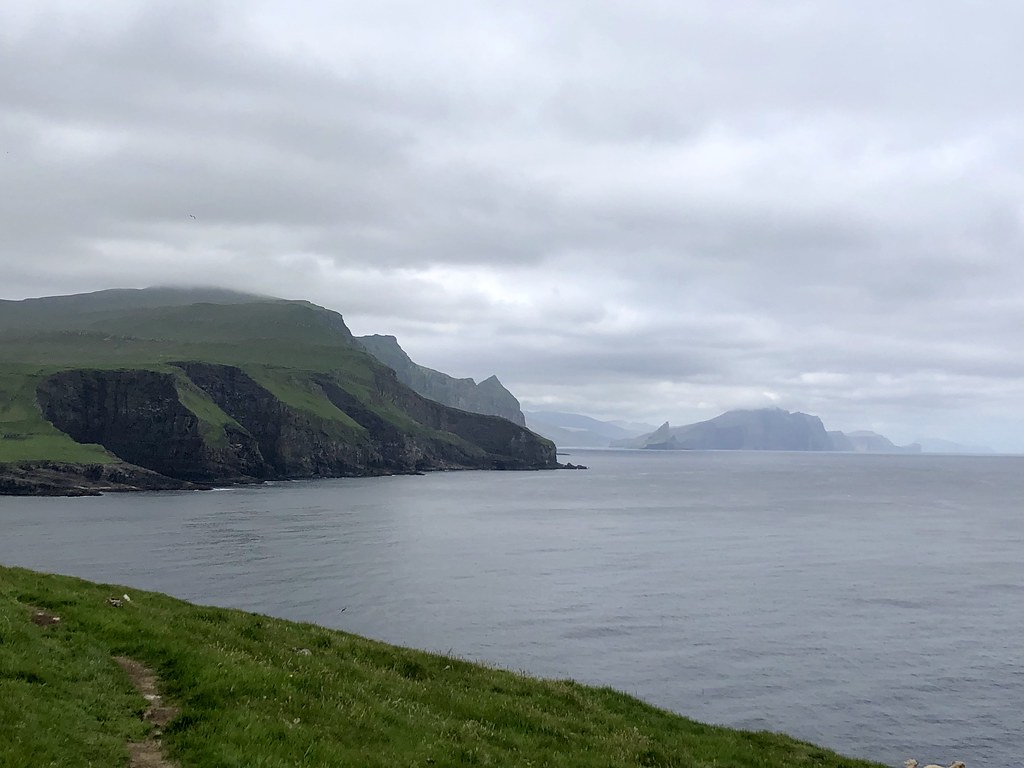 After the bridge the path splits; to the right you go up a big grassy hill, to the left you go along a sea cliff. Aaron chose the hill and I chose the cliff. I had sweeping views of the sea, passed an old stone hut of sorts, came across a sheep skeleton, and also some deserted tracks that looked like they must have been used to bring supplies up from the sea to the lighthouse. 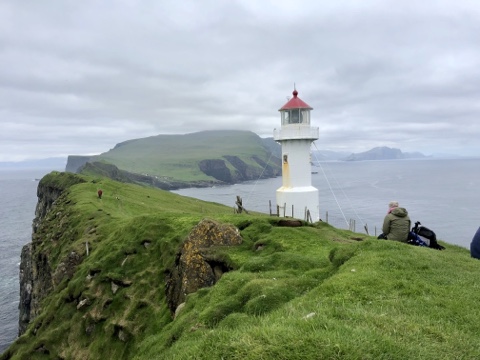 My trail ended with a very steep climb straight up to the lighthouse. Aaron had beat me and was relaxing with the incredible views. It was a tough climb but absolutely amazing! After a little rest we started back, we'd be hiking the same way out, except that I was doing the trail Aaron had taken now. 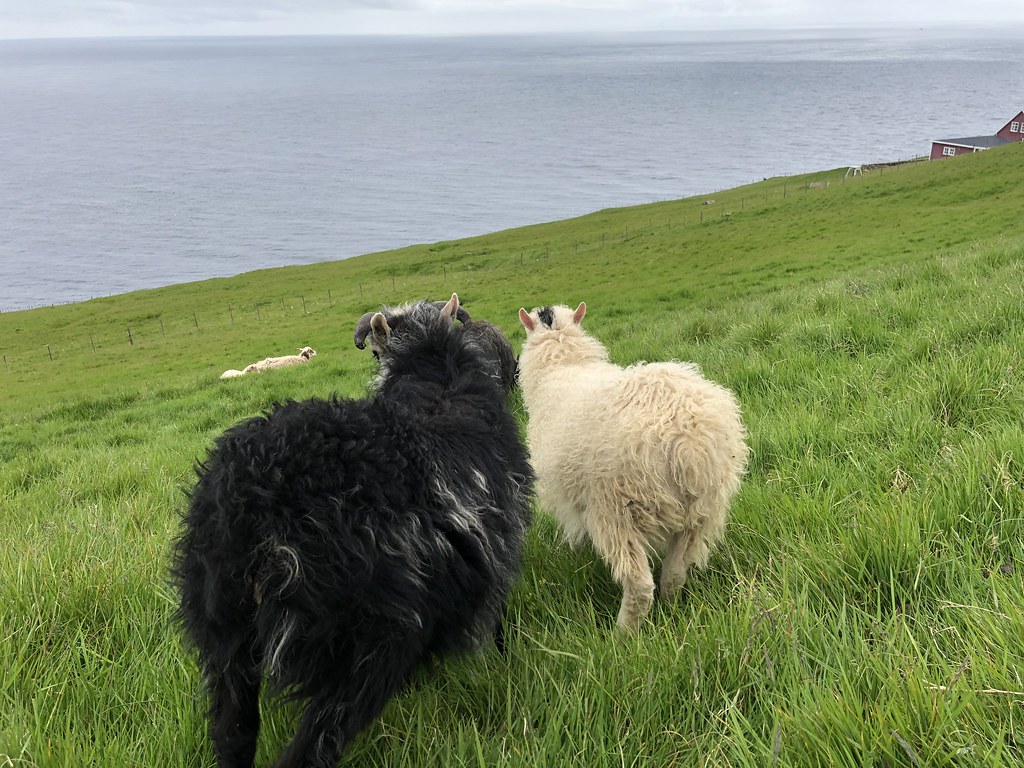 Normally I don't like a down-and-back but how often do you get to go through a puffin colony? Twice! It was so incredibly awesome! 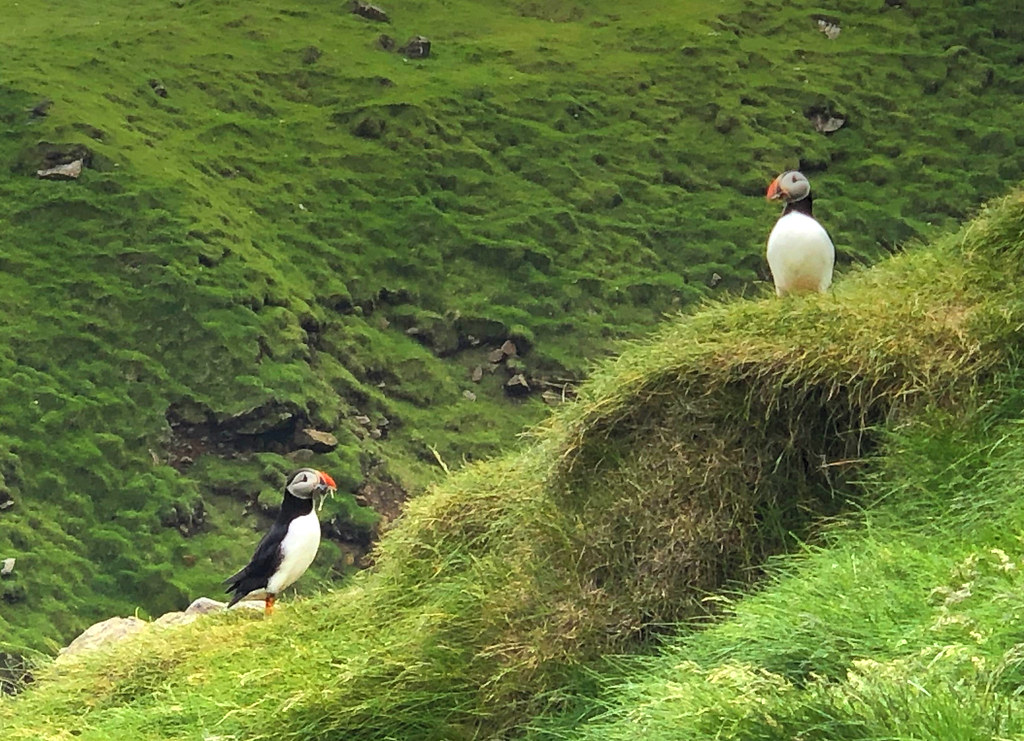 Our ferry had dropped us off at about 1:45pm, we hiked just over 5 miles round trip and did 100 floors! It took us about 4 hours. We got back to the little town with about an hour to spare before our 7pm departure. It's very small and cute, we bought a few beers from a shop and found a bench with a view. Mykines has an official population of 14, I think most of them might be in this photo! 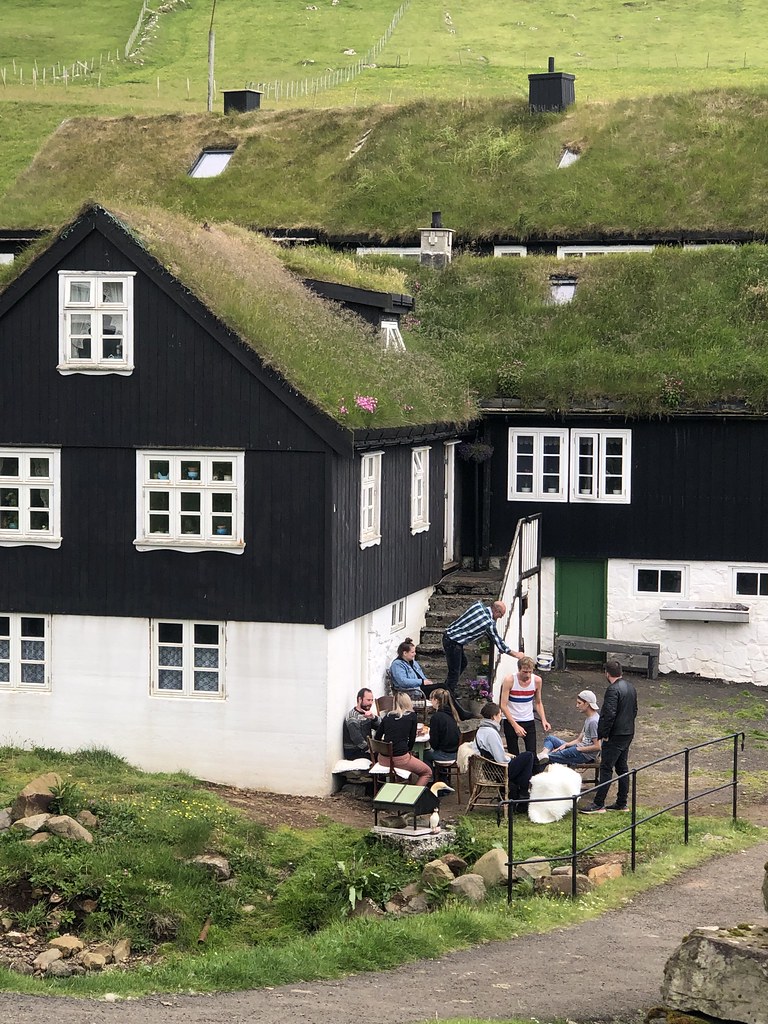 If you have a chance to hike Puffin Island I'd say it is a do-not-miss adventure!

The next day we drove to Vágar again, this time to hike out to Leitisvatn, the largest freshwater lake in the Faroe Islands, near the village of Miovágar. 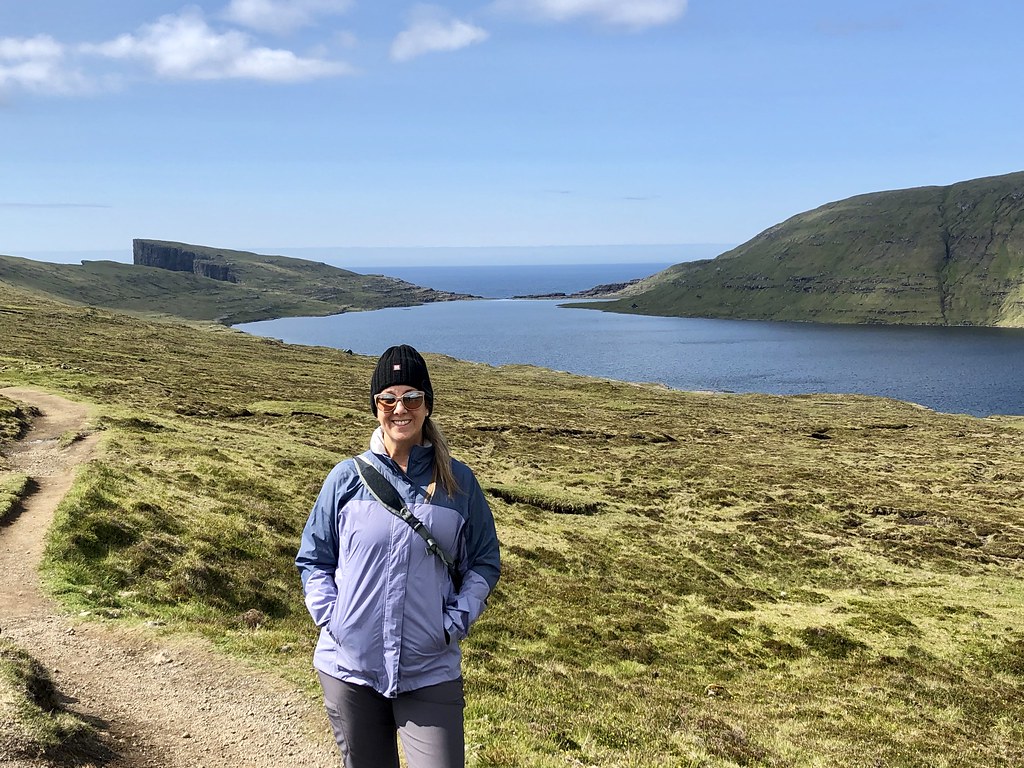 There is a small parking lot at the trailhead that has public restrooms and a shack selling coffee. It's an easy flat trail that runs along the lake for about 1 ½ miles and gives you great views of Slave Cliff which was our destination. The lake looks like it's an infinity pool! 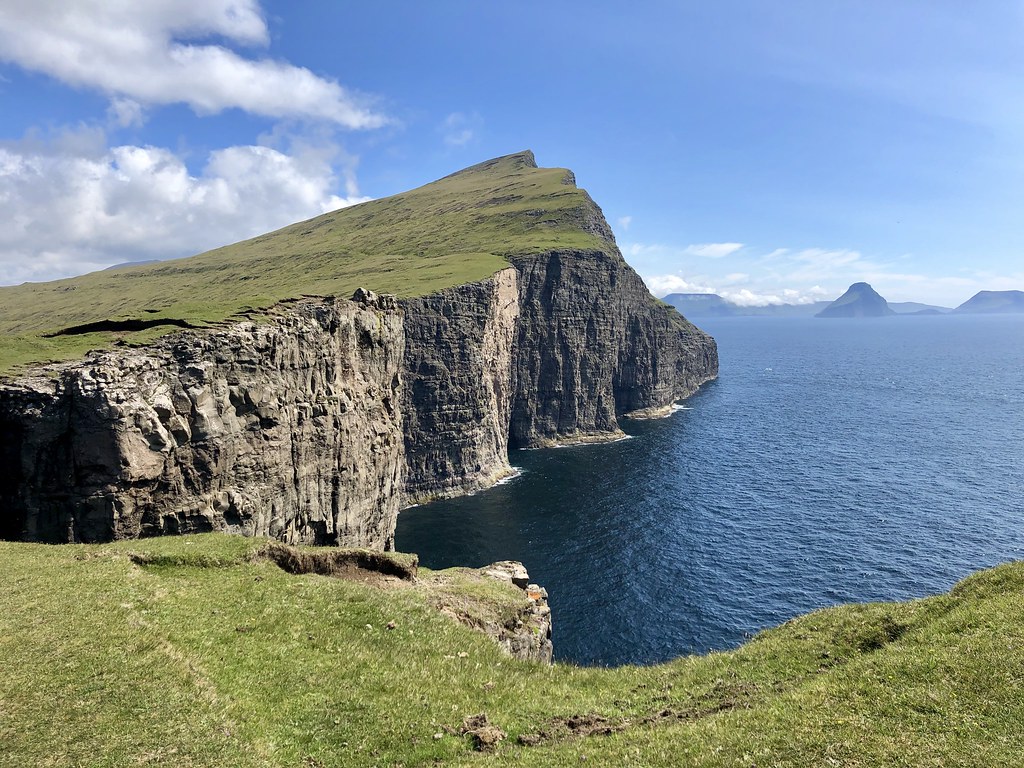 The cliff's name supposedly references the location where Vikings would push misbehaving slaves off as a death sentence. It's a steep hike up from the base and it's a long way down if you get too close to the edge. But the views, especially on the sunny day that we had, were gorgeous. From here you can also see how much higher the lake is than the ocean. 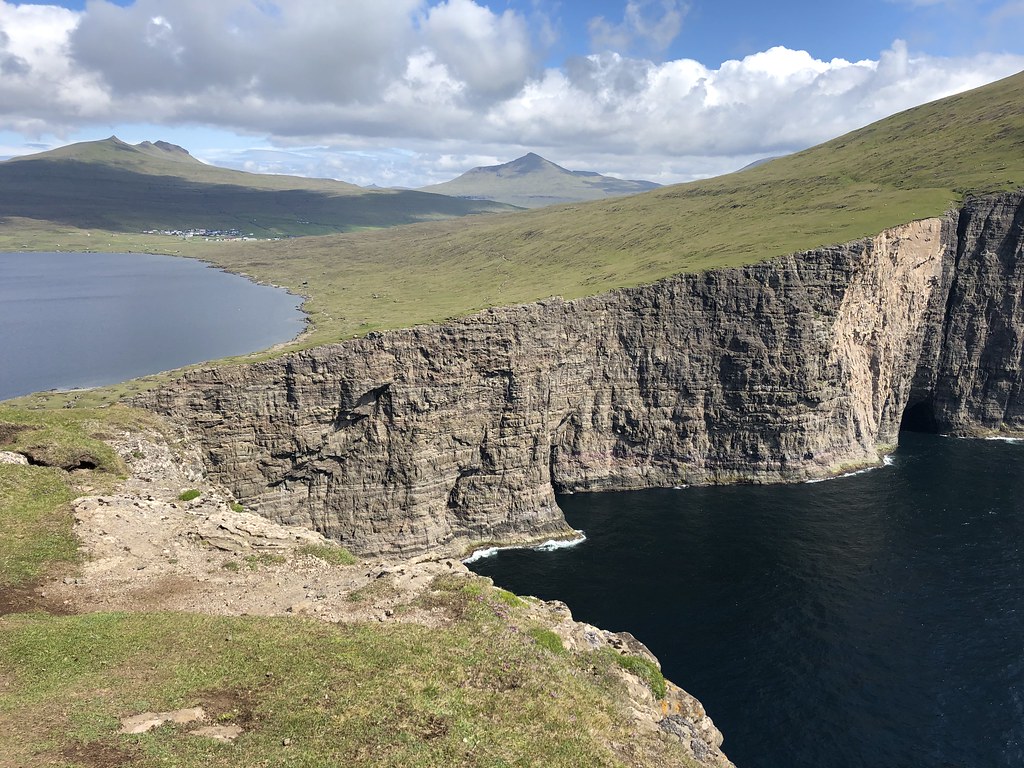 On our way down we scrambled over a field of boulders for a peek of the waterfall that falls from the lake into the sea. We couldn't quite get a good vantage of it and I wasn't about to lean out over the cliff for a better view! 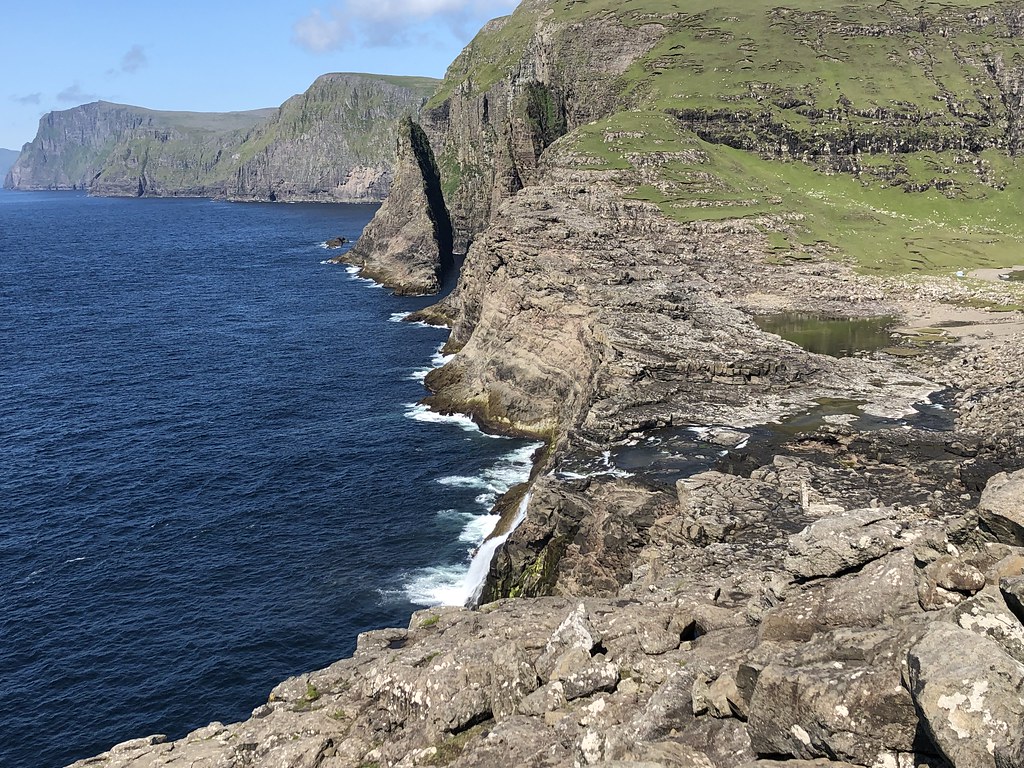 From here, we made our way back on a trail that was closer to the lake, stopping for a little beverage break and hanging with the sheep. It was all very pretty and took us a little over 2 hours (mostly because we ended up off the trail and clamoring around a bit.) 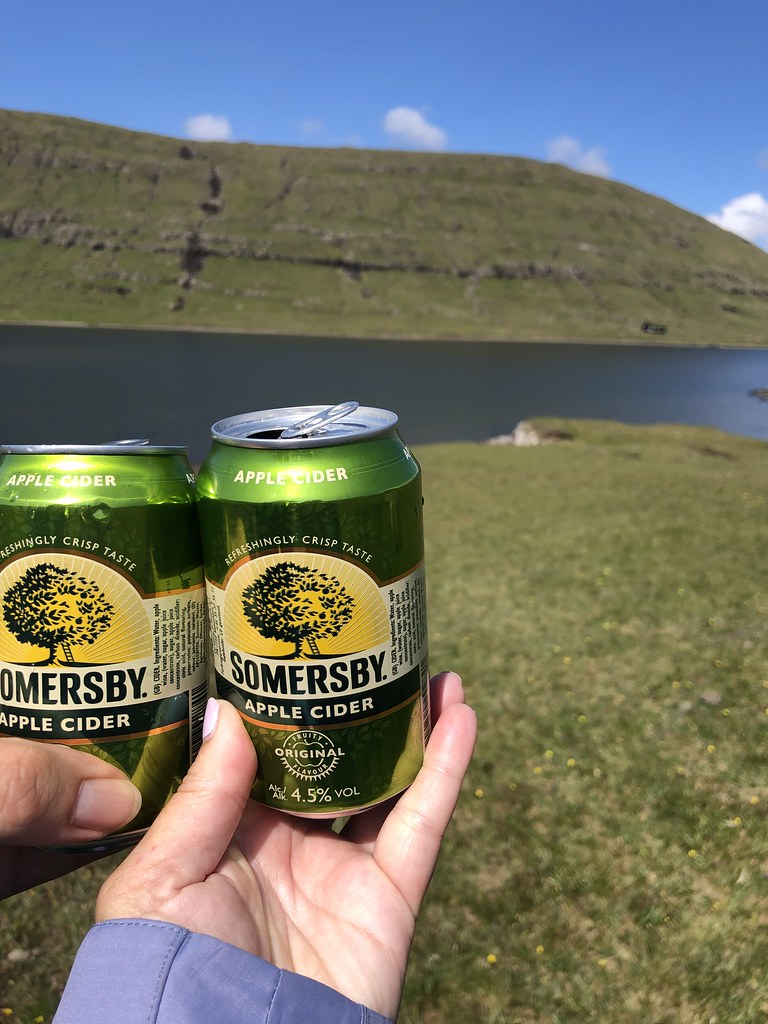 FYI- When we got back to the parking lot we asked the guy selling coffee if there was a restaurant in the nearby town that we could grab a bite in. He explained that there were really very few restaurants at all, and none open before dinner. He suggested we stop at the gas station for a hot dog or the grocery store for a prepared deli salad. 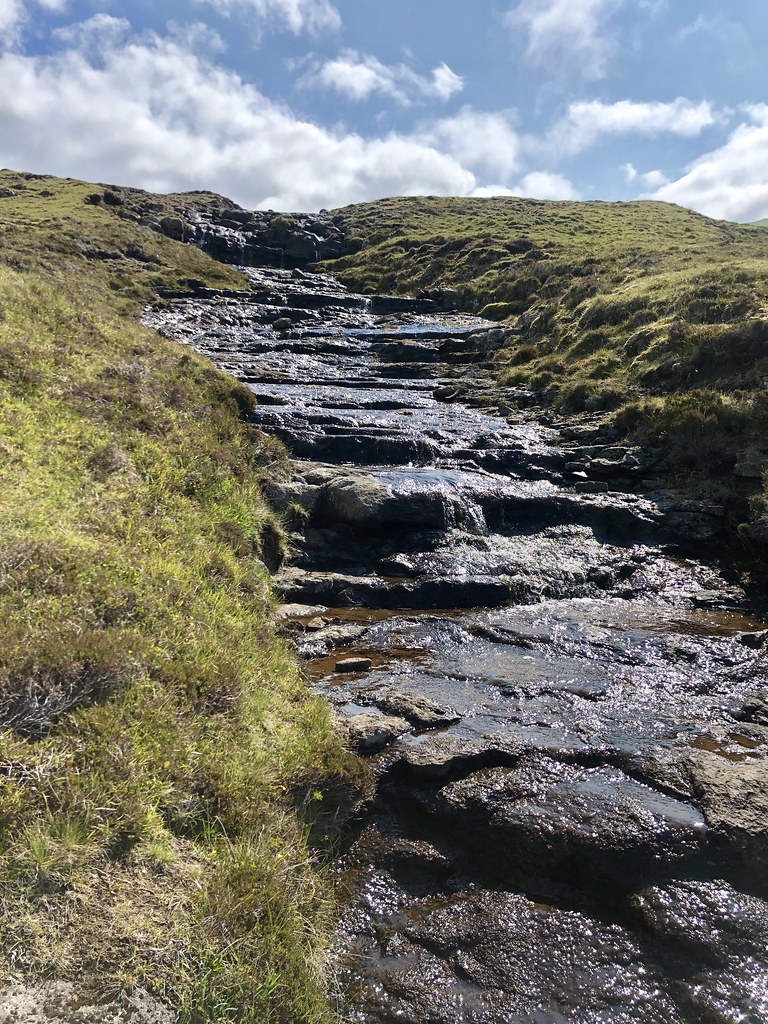 We got so incredibly lucky with the weather, we expected a lot of rain and wind, but if you go hiking in the Faroe Islands I'd come prepared with waterproof everything as there is a reason the territory is so green!

All photos of the Faroe Islands here.