We were leaving Ho Chi Minh City and heading to the Mekong River where we had booked a private charter with Mekong Eyes. A mini van picked us up at our Airbnb and in 2 hours we arrived at our boat, Dragon Eyes 2, in Can Tho on the Mekong Delta. 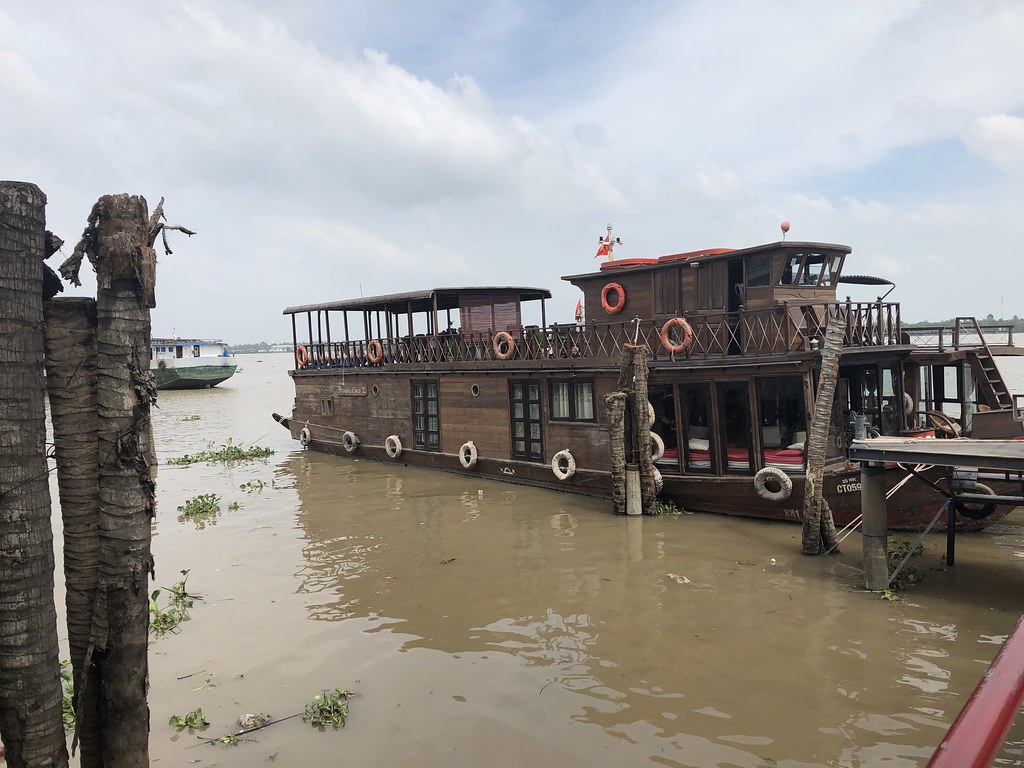 The boat was much nicer than we had expected! There was a formal library/sitting room, 2 staterooms each with their own bathroom, a fantastic upper deck with lounge chairs, a covered dining area as well as an uncovered one. 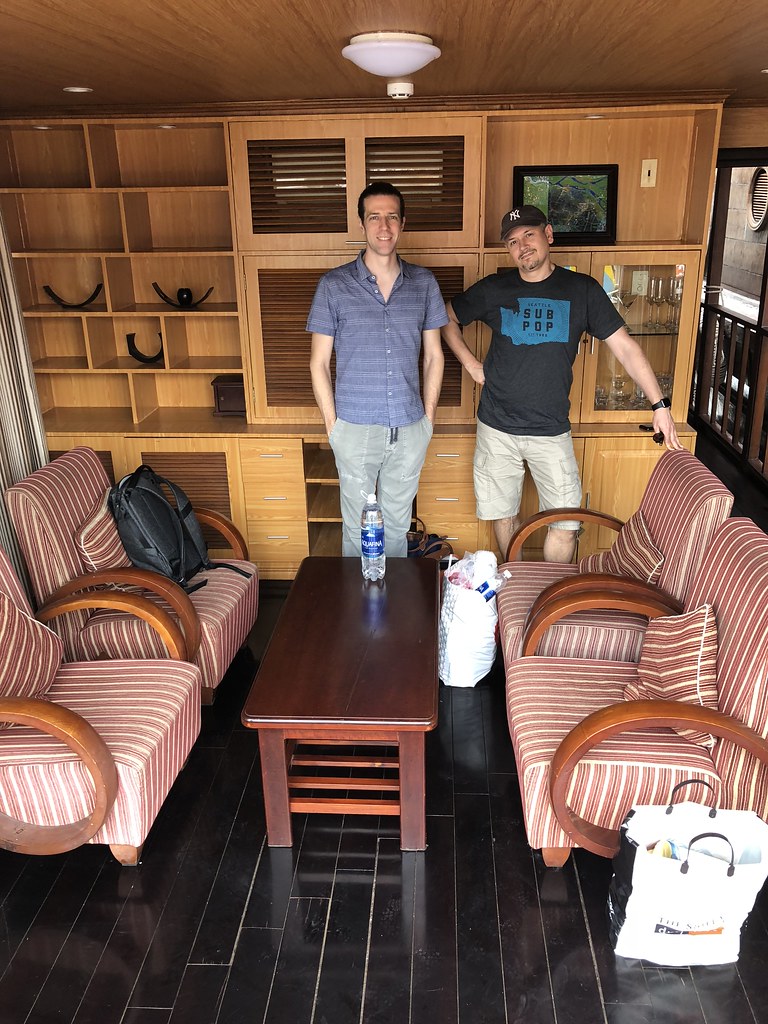 We were welcomed on board with drinks and soon after we set sail our steward spent some time explaining where we were going (Cambodia) and what we would be seeing along the way. I was super excited! We had some time to relax and watch the life of the river before lunch. 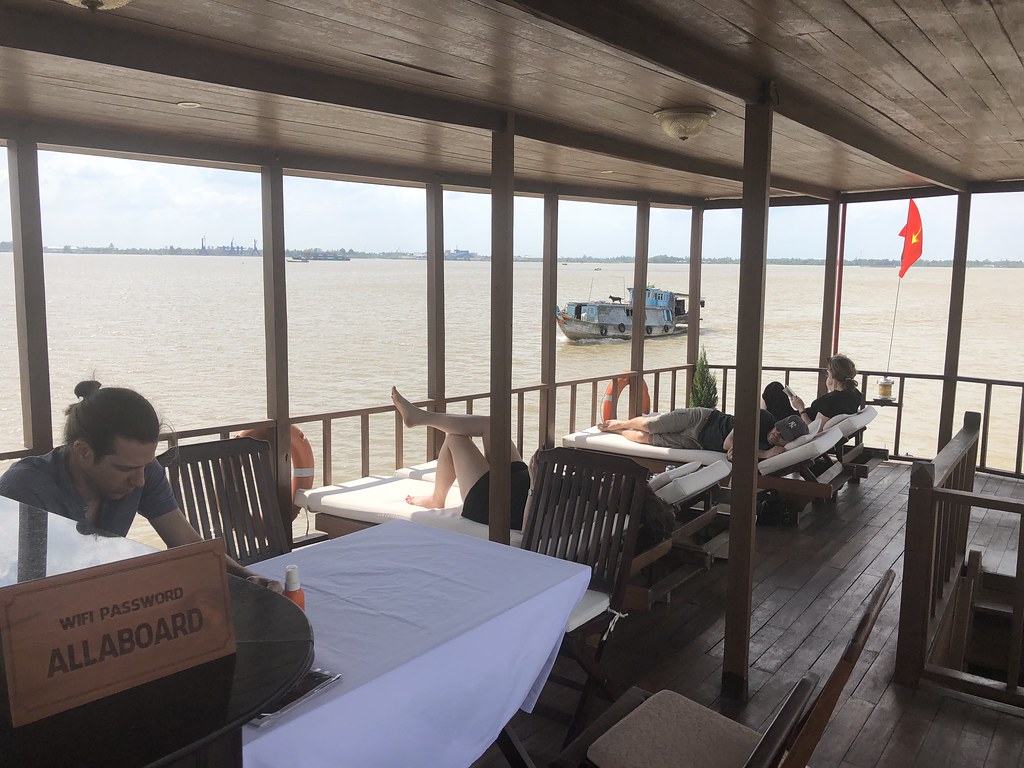 Our lunch was fantastic! It started with a whole fried fish that we picked the meat from and used to make our own fresh spring rolls, being advised by our steward. 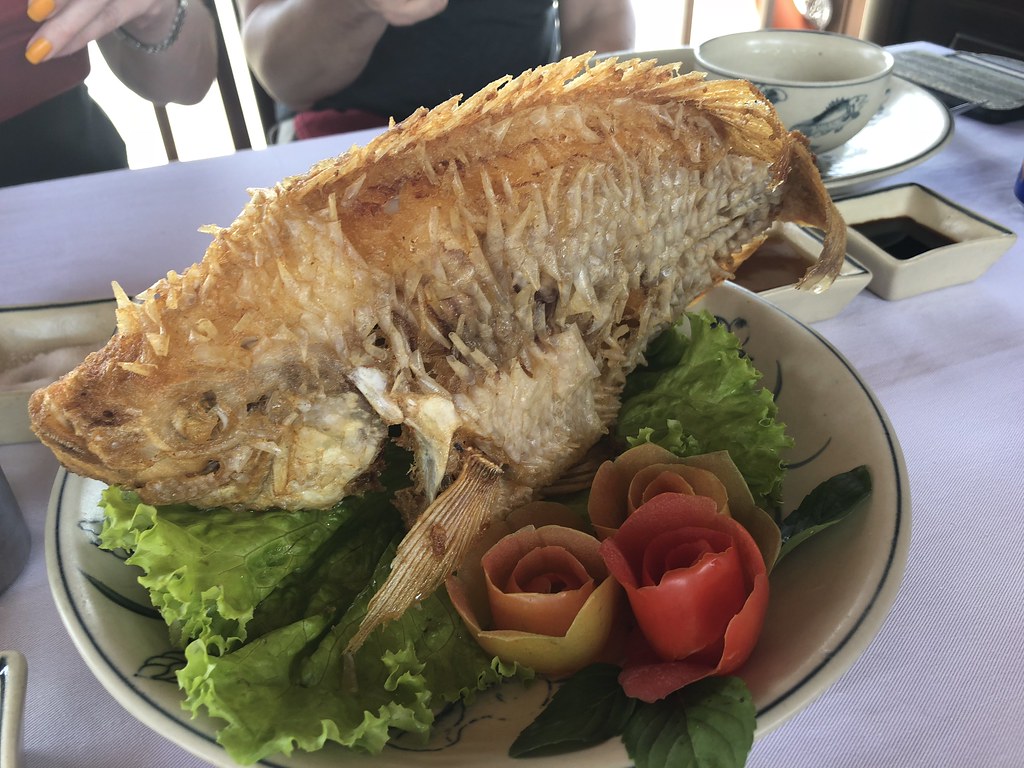 This was followed by some delicious grilled chicken served with rice and vegetables. We were really pleasantly surprised by the meal! After lunch we spent some more time on our lounge chairs, napping and reading. It was so relaxing. And the scenery was pretty incredible. 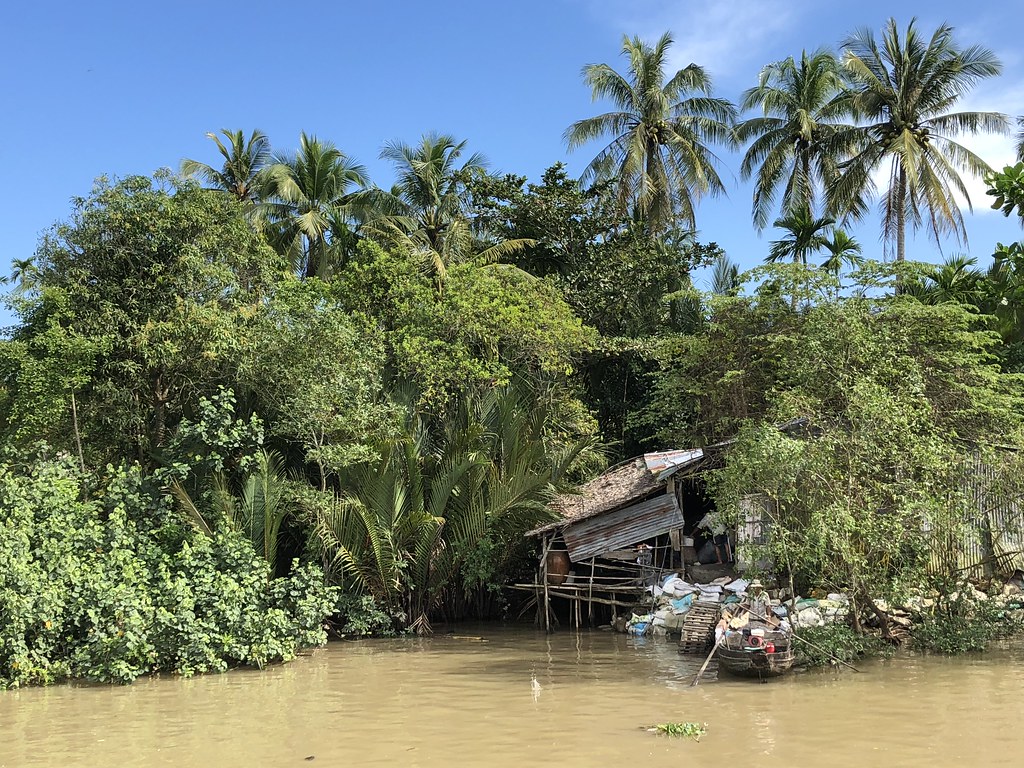 As our boat passed various villages, little kids ran to the riverbanks yelling HELLO!!! Most likely the only English they knew and excited to see foreigners sailing by. Seems like they had the schedule down pretty well!

Late in the afternoon we made our first stop in one of the tiny villages.  We were led off the boat and crossed the river on a pedestrian/motorbike ferry, it probably could have held a car but I doubt that anyone in the area owned one. 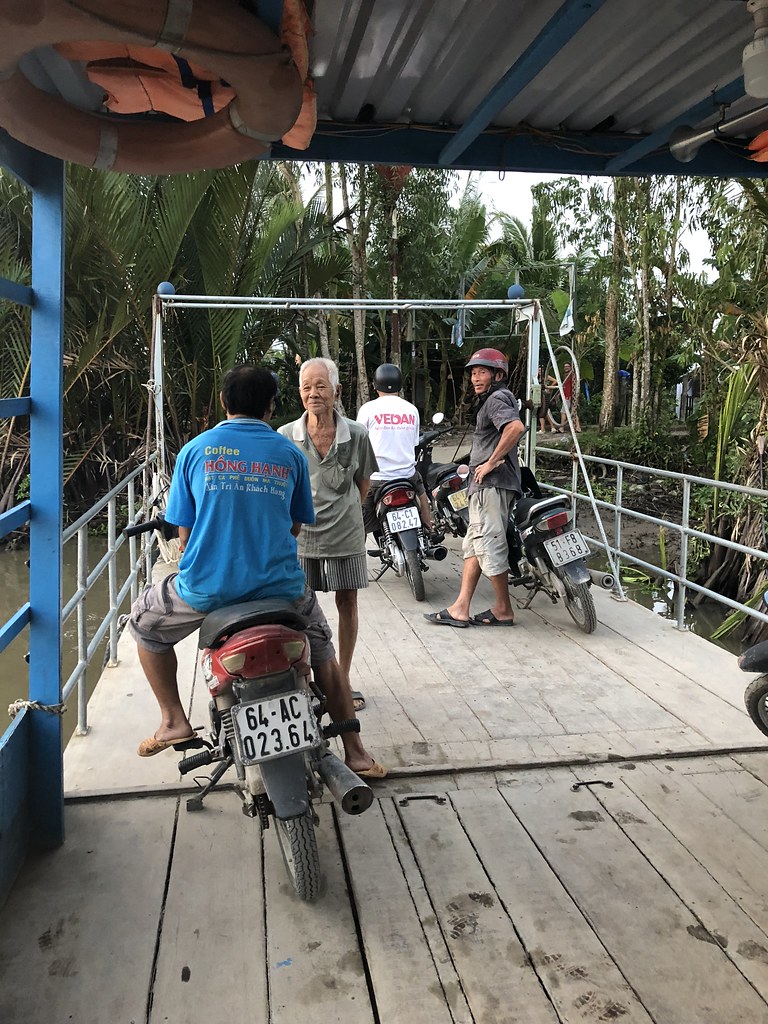 We were welcomed by a local family to explore their home, which had a mini farm of goats and pigs onsite, as well as fighting cocks, and a bath where snakes, frogs, and fish were kept for cooking. The house was plain from the outside but pretty modern when we peeked in. 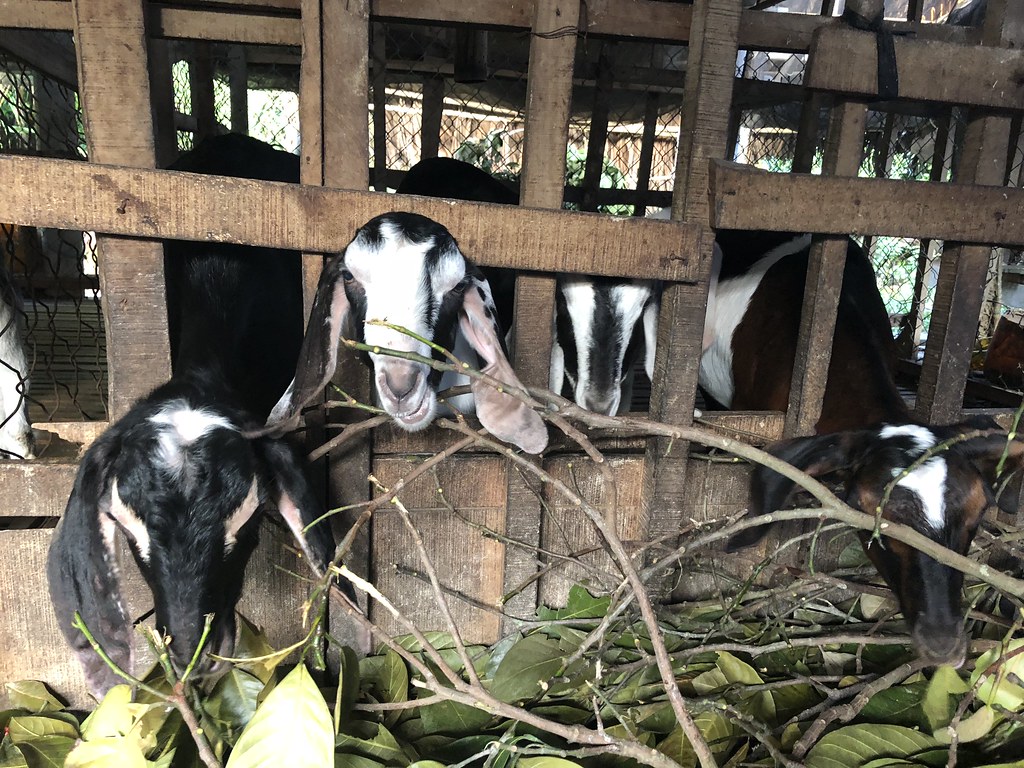 From here we continued through the village and out to a rice paddy where we watched one of the villagers seeding. The color green was so beautiful! 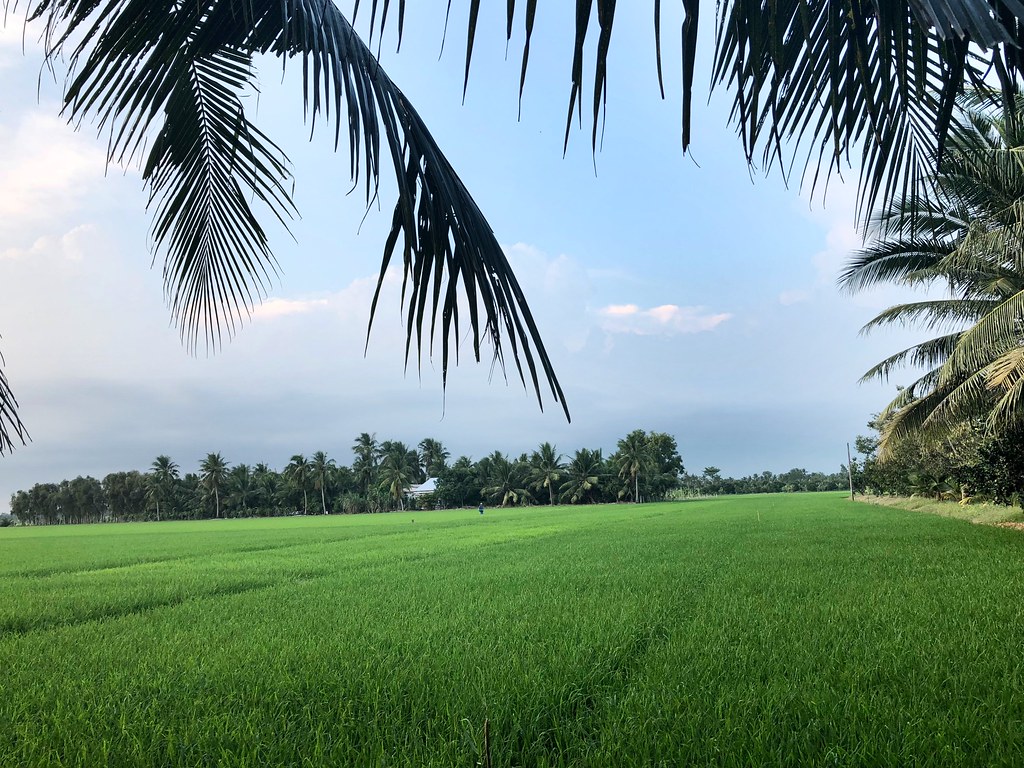 Before heading back onto the boat we were given a little information on the local church's religion of Cao Dai. And then it was cocktail hour aboard the boat, while we continued sailing along at sunset. They made us gin and tonics and set out some fresh fruit, coconut, and spicy peanuts. 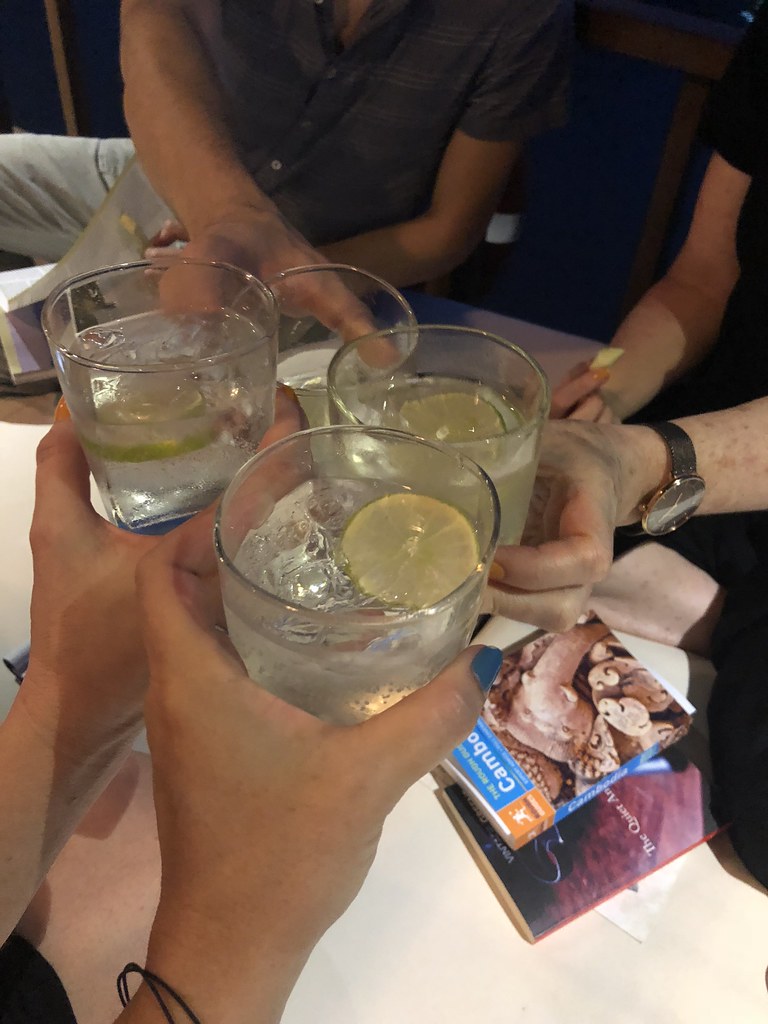 We were seated outside for dinner and were served another fantastic meal of dumpling soup, shrimp and bamboo salad, and a stirfry. I'm pretty sure we drank them out of wine! 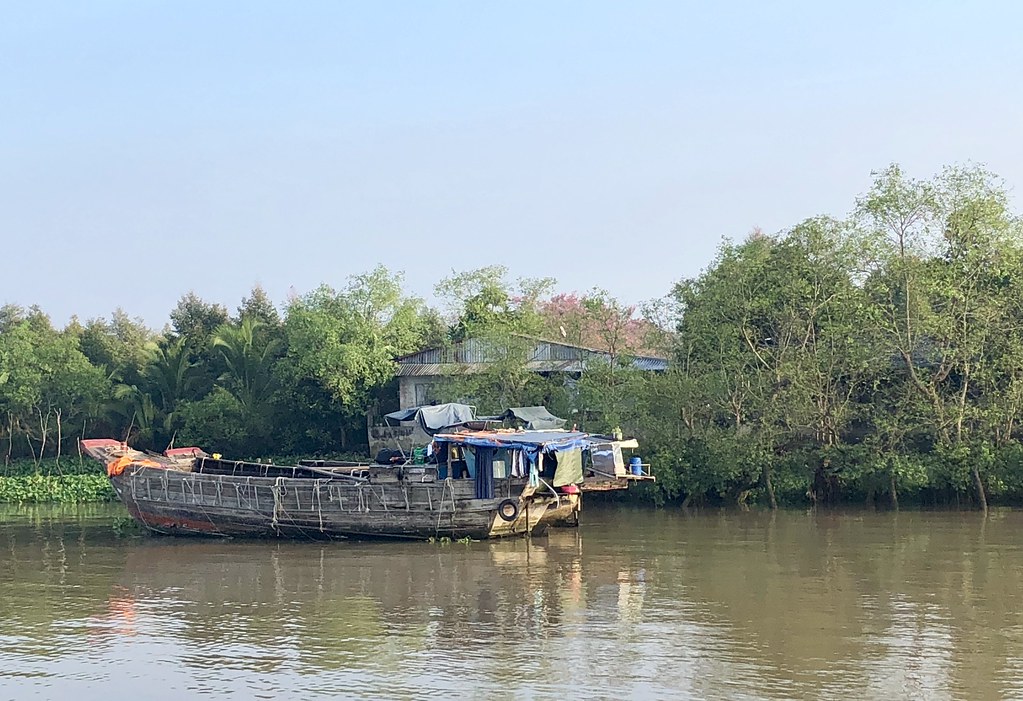 We were up bright and early the next morning for breakfast, a big spread of scrambled eggs, toast,  juice, coffee, and platters of fresh tropical fruit. Then we had another 2 hour sail, the river was very quiet early in the morning. 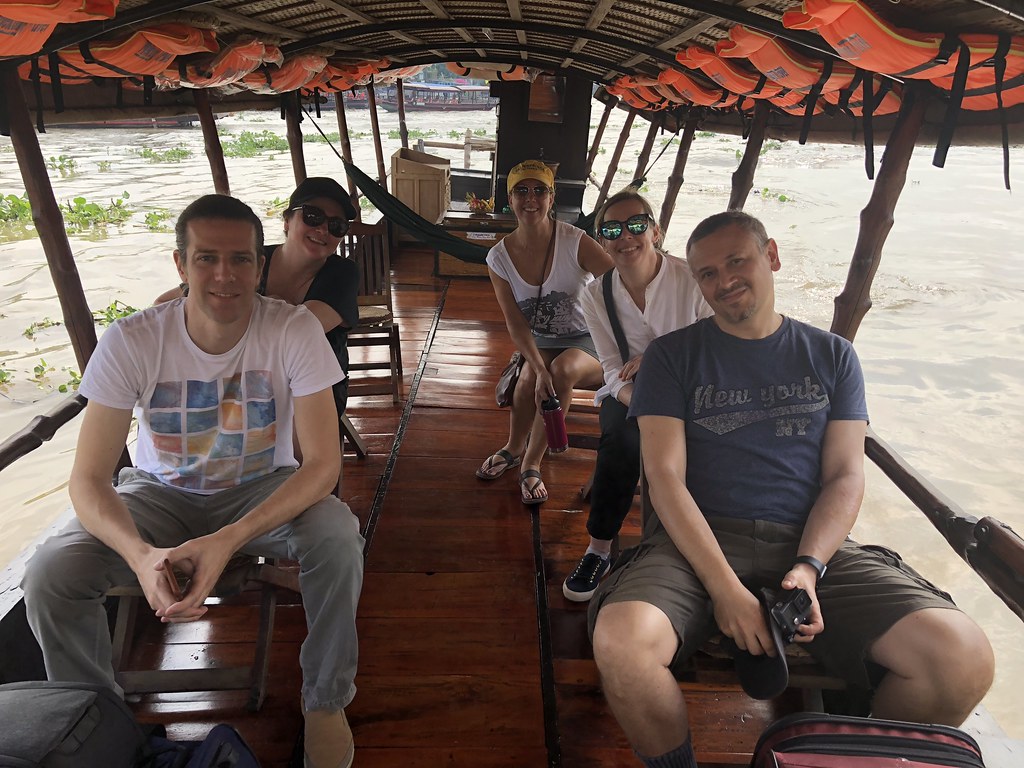 We came to another village and said good-bye to the Dragon Eyes 2. We were transferred, along with our luggage, to a smaller traditional style boat, and taken to the Tan Phong islet, where we transferred again into sampans, for a tour of the canals, rowed by villagers. 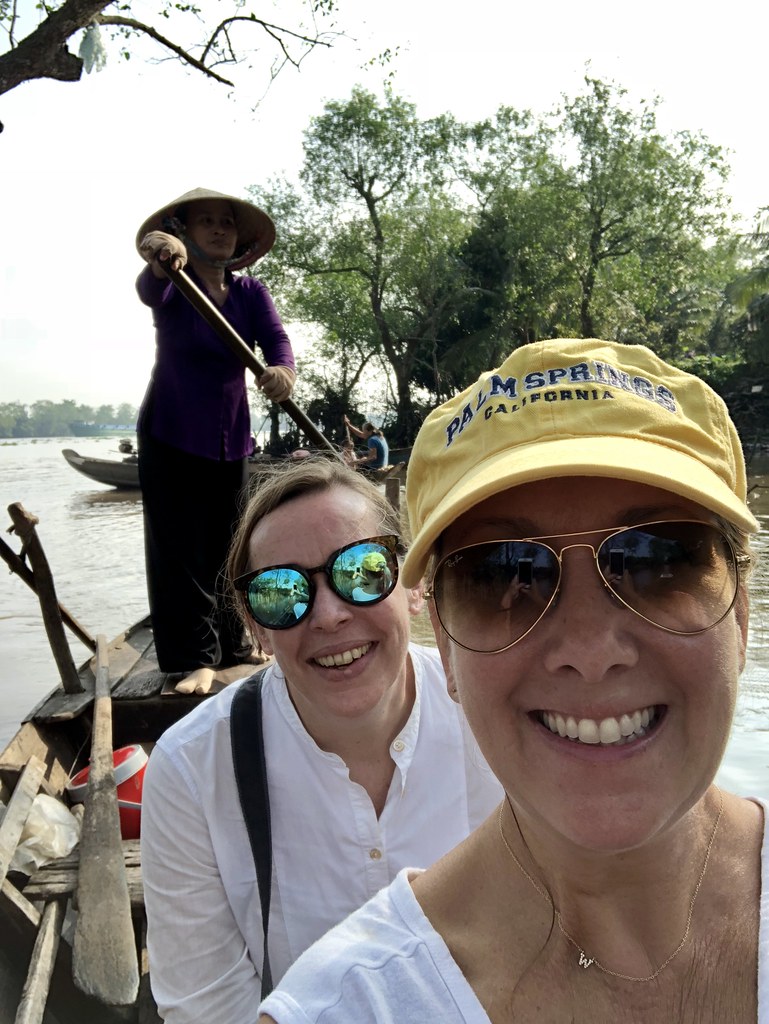 After reboarding our smaller boat, we cruised along to the Cai Be floating market. Just like your normal farmers market, with vegetable, juice, soup, cookware vendors, only all the vendors here were working off their boats. It was small but pretty interesting! 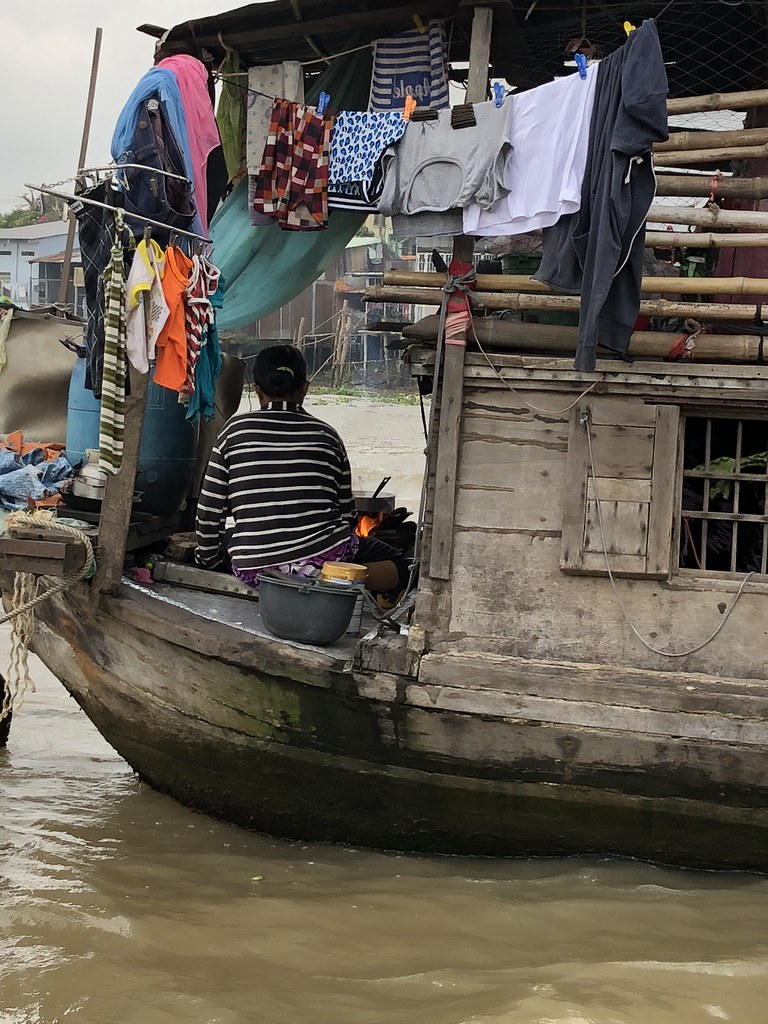 Our last stop on the Mekong River was a factory where locals were making coconut candy and rice paper wrappers. None of us were very interested to be honest, but we were polite and followed our guide in. The stop ended up being really interesting, and the candy delicious. It was so cool to see how they made everything, but especially the rice paper, a brand that I buy here in Seattle, being made and then dried on bamboo racks outside next to the river! 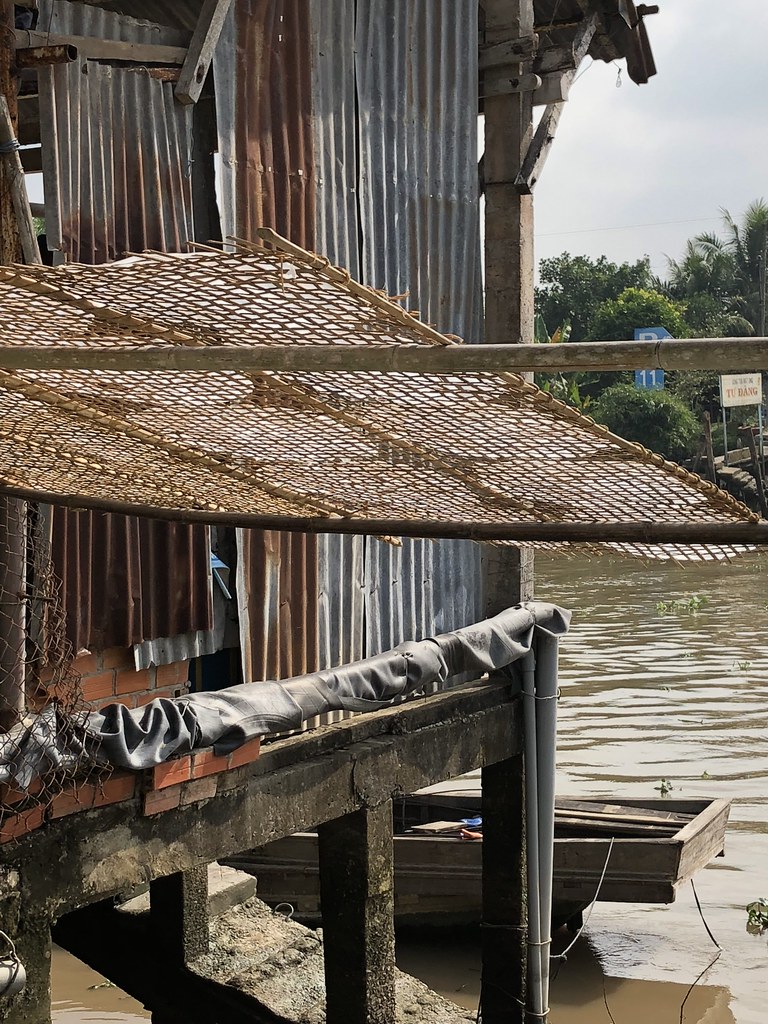 We weren't at our final destination yet, but we were leaving this part of the Mekong River sadly. A van arrived to pick us up at the dock in Cai Be and we loaded in for the next part of our adventure. 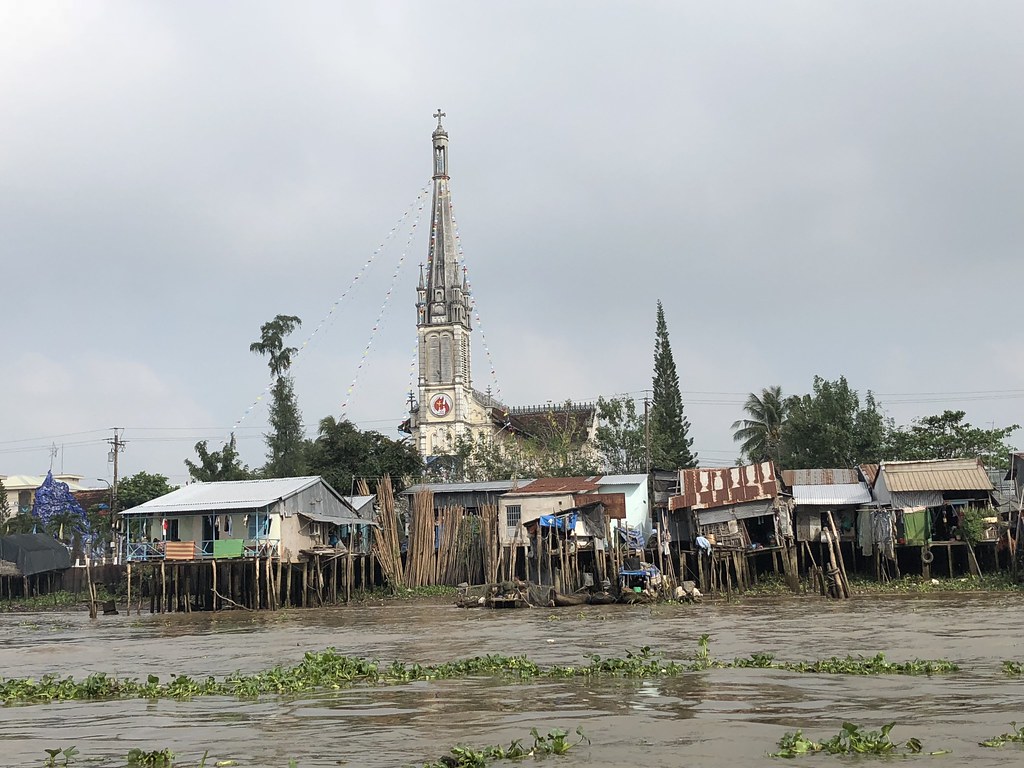 All photos from the Mekong River here.