During SIFF's annual fundraiser last year, my friend Gail convinced me to go in with her on a bid for the Willow's Inn dinner and stay over. She'd never been and was really interested in checking it out. I've been multiple times so I was easily influenced (the copious amounts of wine they serve you during the auction didn't hurt either!) 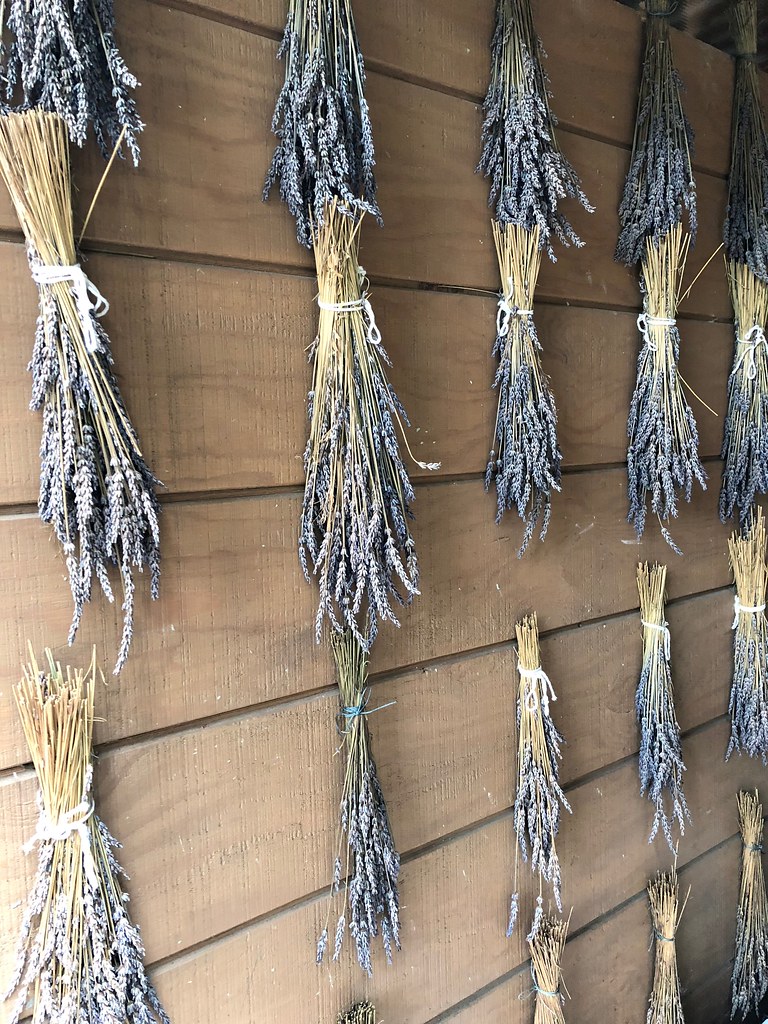 We raised our auction paddles until we won (charity and all that) and planned our trip up to Lummi for early October, hoping to still have good weather.

It was a beautiful fall afternoon when we drove up and after we crossed the Sound on the little Lummi Island ferry we stopped to take in the view of Mt. Baker. 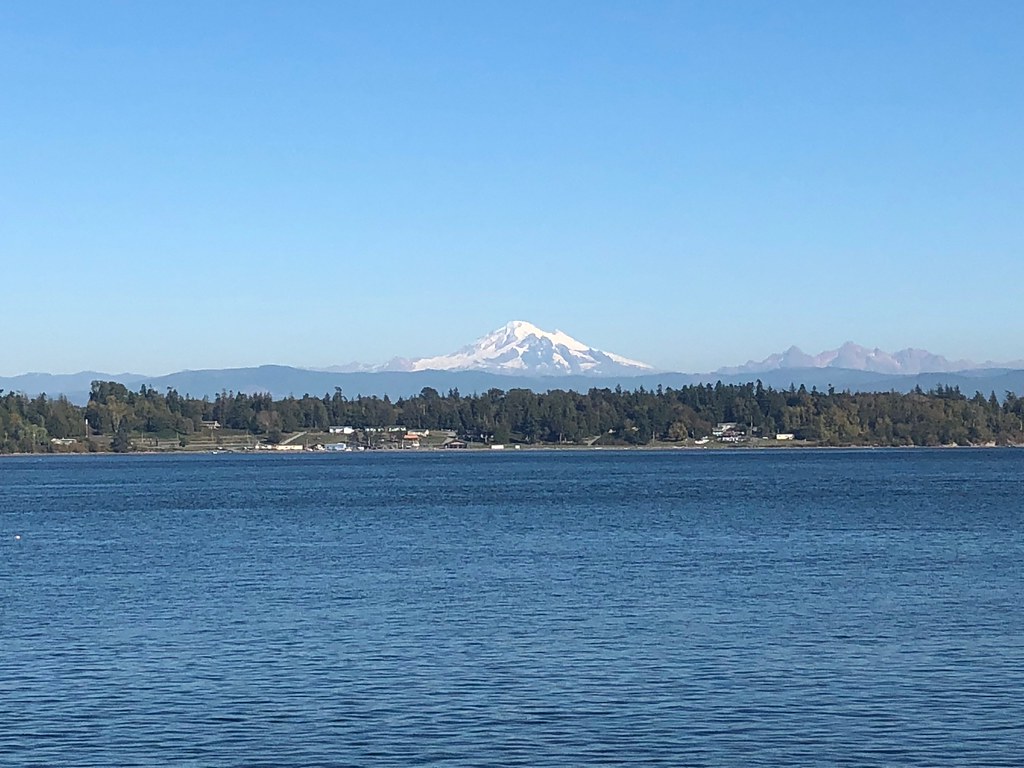 Upon checking in, Gail realized that she knew Ann, who was at the front desk, from back in Minnesota! Small world!

We had booked the Heather Room which is one of the only rooms with a King sized bed. It also had a very large steam shower in the bathroom. We changed our clothes and headed out to the front porch where Happy Hour starts at 4pm. The chef's were just finishing their family meal outside in the late afternoon sun. 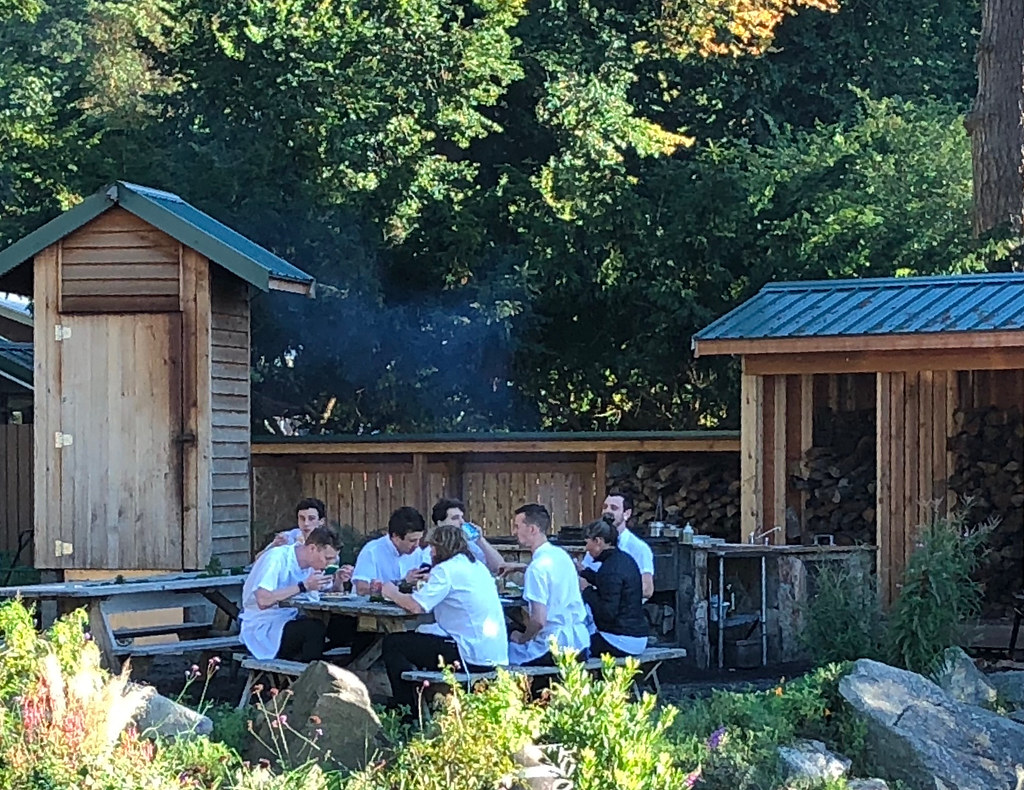 As we enjoyed a few drinks, the chefs started bringing some wonderful little bites out from the kitchen. A selection of different cucumbers from the garden, spot prawns in nasturtium blossoms, the signature crispy kale leaves, etc. Everything was delicious and beautiful and a great way to ease into dinner. 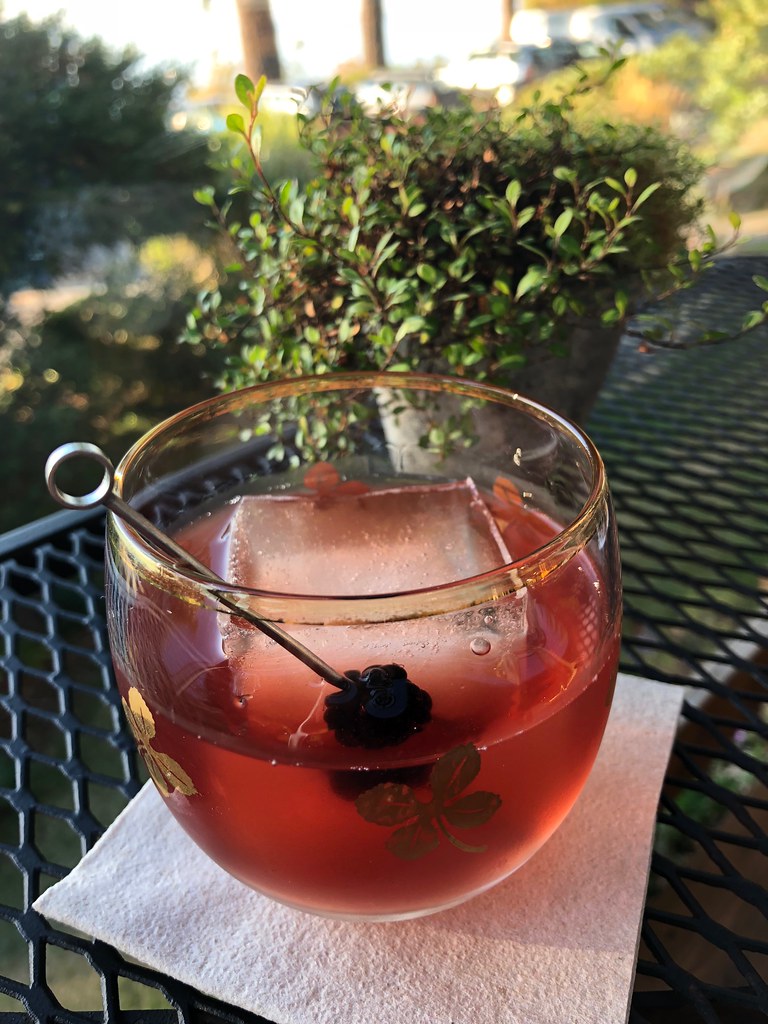 We were moved inside for dinner where 14 wonderful courses were presented, not all at once mind you! Some of the highlights for me were the oysters and watercress, sea urchin with chanterelles, rock fish in bone broth, and bread with crab brain butter. 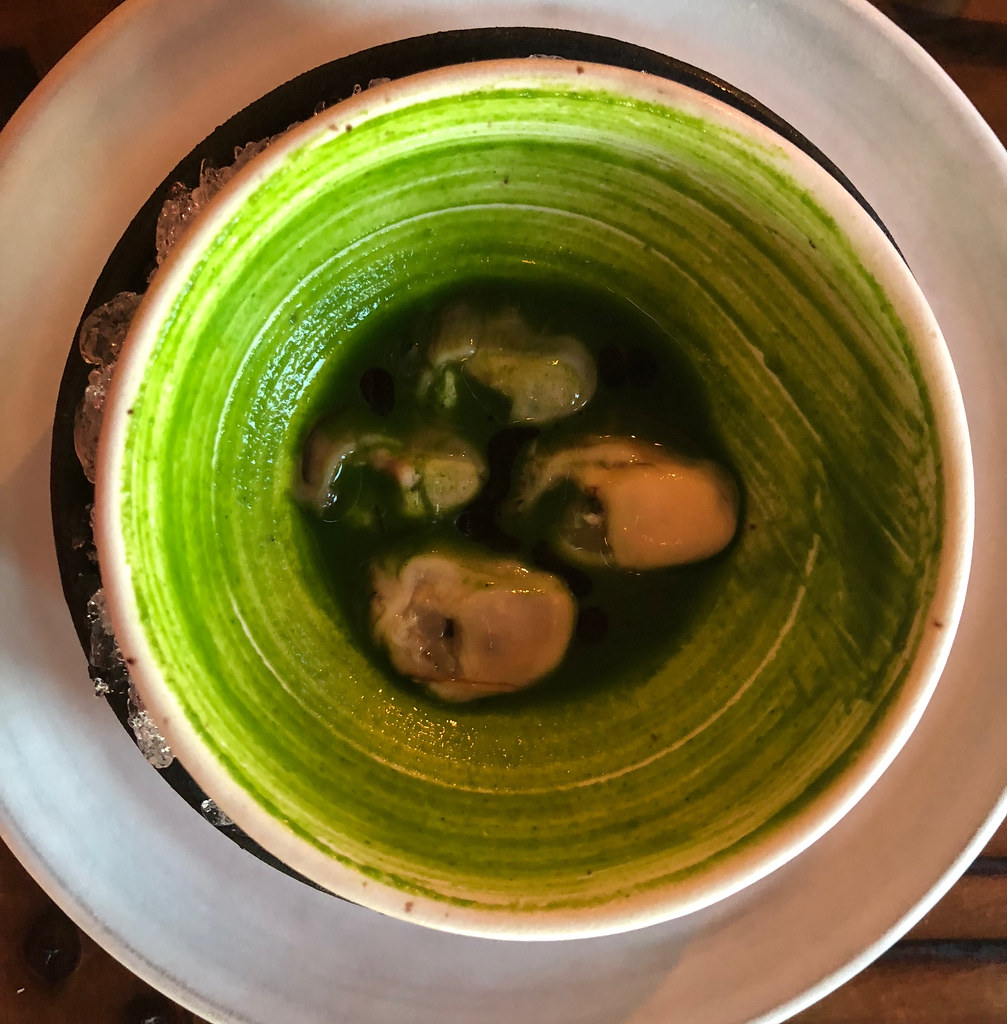 And of course the sunset! It's always a crowd pleaser! 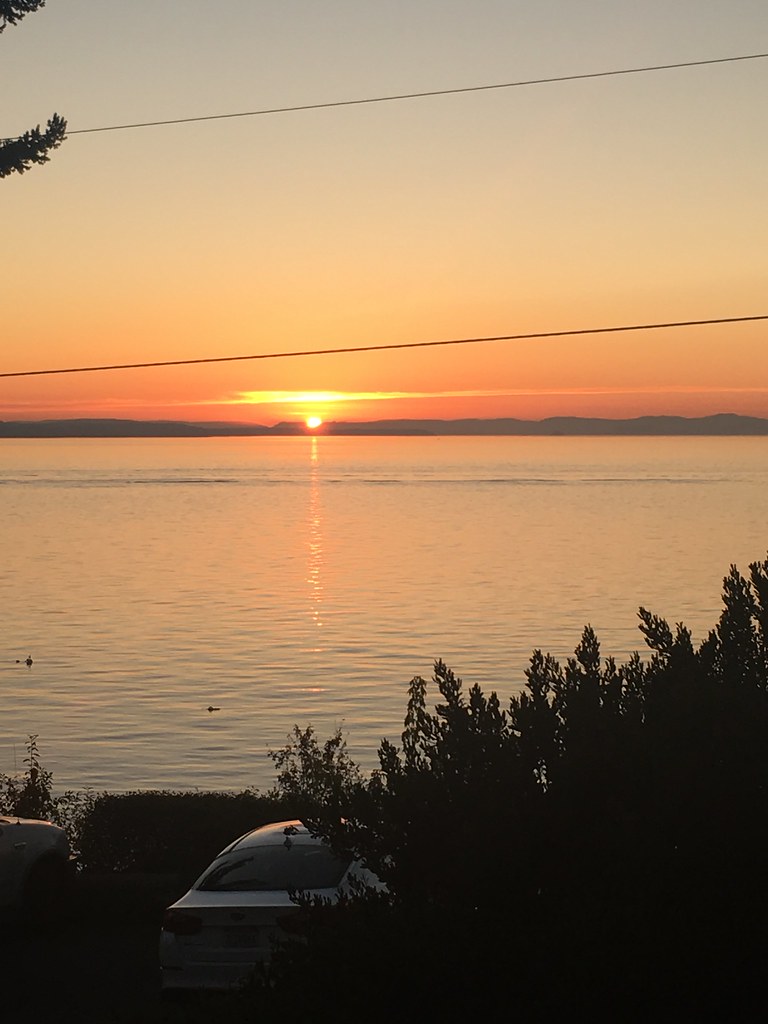 After dinner we were invited into the kitchen where we had a very fun chat with Chef Blaine complete with a little nightcap and tour of the pantry. Foodie-heaven I tell you! 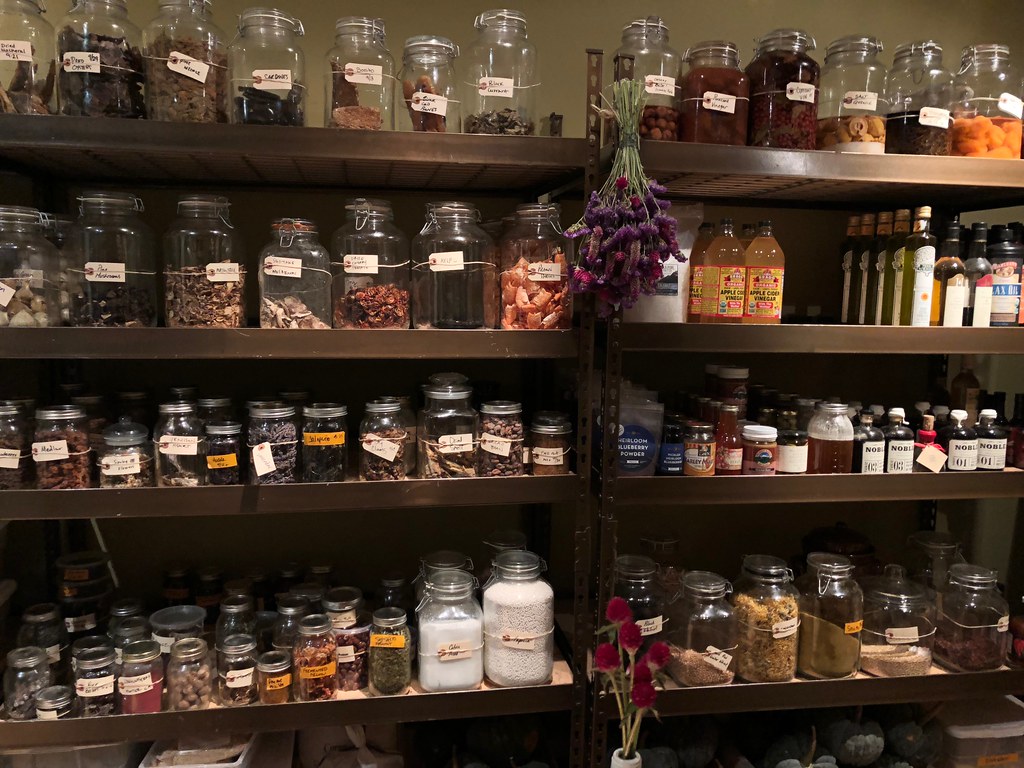 Our stay also included breakfast which I hadn't done in years. And it's different now. We were each served a brilliant green juice along with our coffee. Then they brought us yogurt with Bourbon sauce (YUM), jam, and granola. 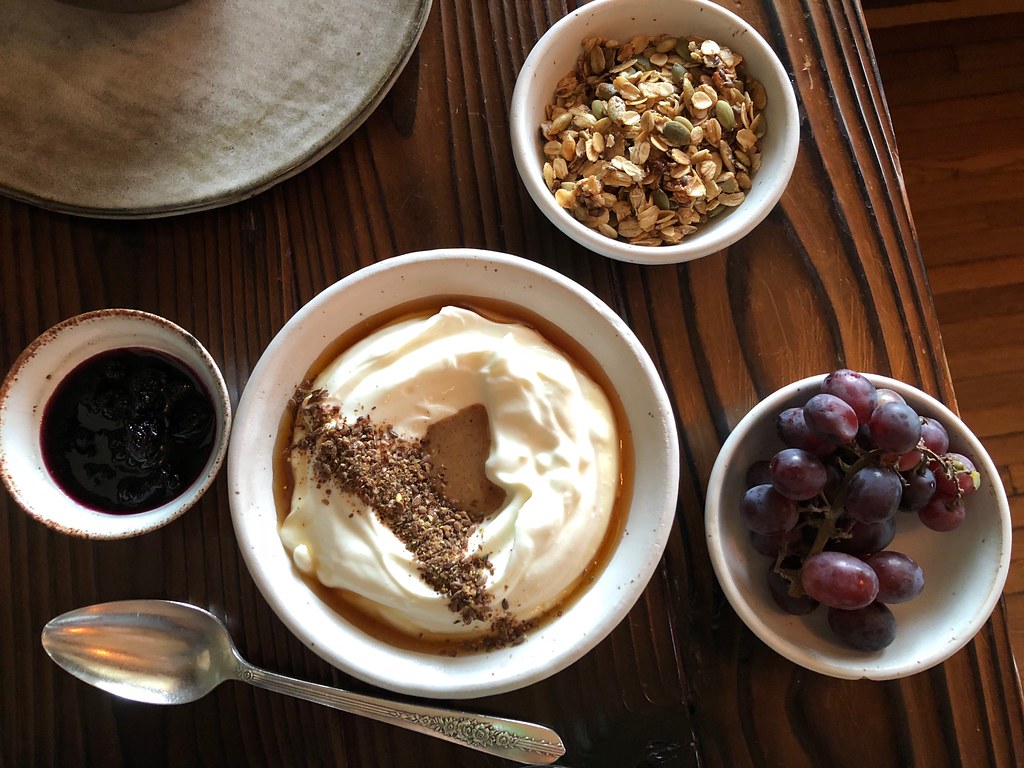 Next came a soft boiled egg and a large plate with bacon, smoked salmon, pancetta, a crepe, cheeses, and kale. It's a big breakfast! And it was very good!

We checked out and took a nice walk along Sunset Beach; completely deserted except for us. There are so many different colors and textures going on there, I love it! 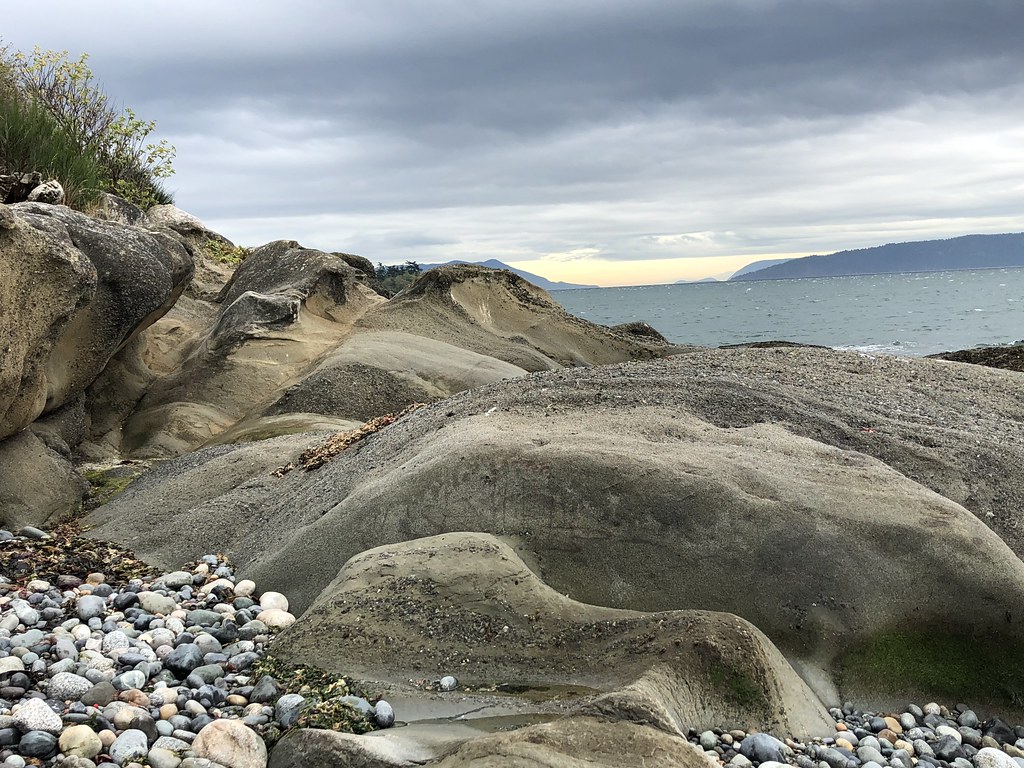 Then we did a quick drive around the island, stopping to admire the moody skies in Legoe Bay, before catching the ferry back to the mainland. 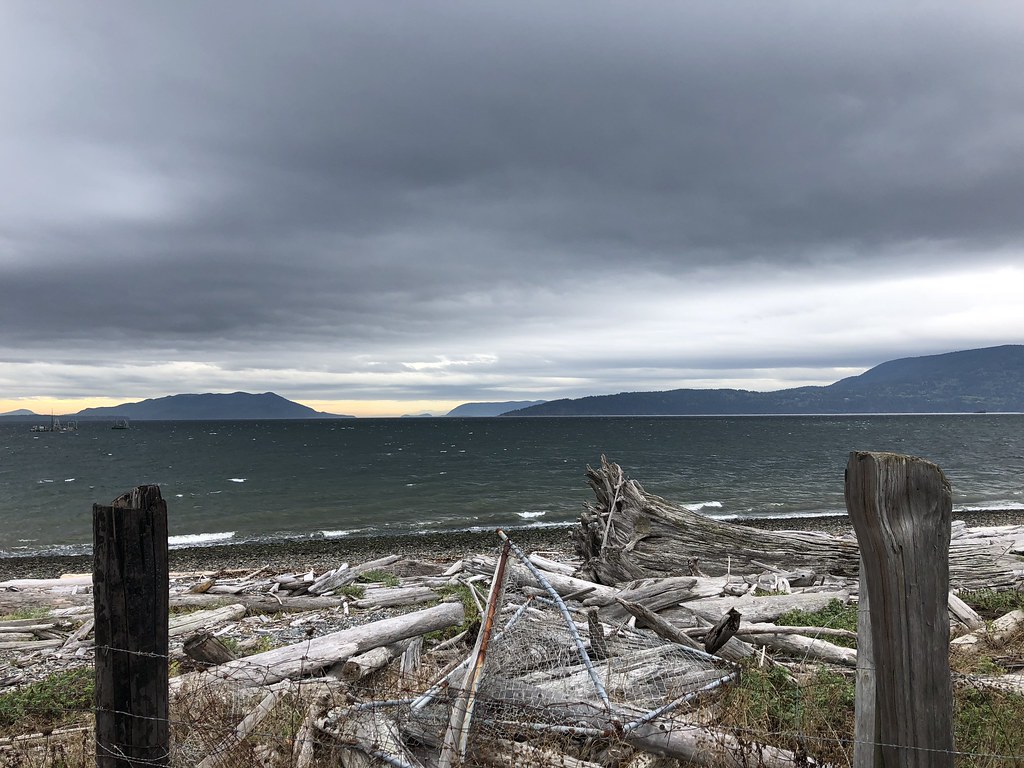 We decided to take the Chuckanut Drive home, which afforded more views. It was a great overnight getaway!

While on the island I had pointed out the Willows Inn Beach House to Gail; I've wanted to rent it for years. She got totally interested in it too, so when the booking calendar opened for 2018, Gail jumped on and booked the entire compound which consists of the Beach House and exterior rooms sharing the same deck, Low Tide and High Tide, for a weekend in August. 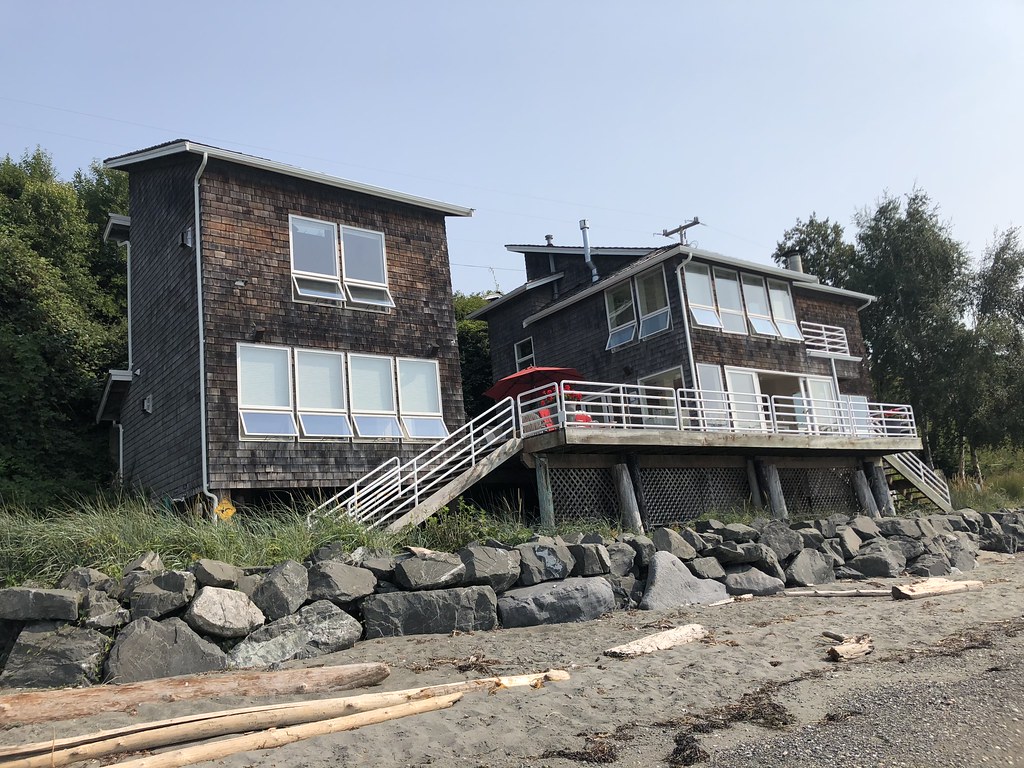 Originally we thought we'd invite a small group, but then Gail, Angela, and I decided that we were just going to make it a girl's weekend and have the entire space to ourselves. Decadent.

Angela has a Jeep and offered to drive luckily, as we all brought way too many provisions for our weekend. The Jeep was packed! 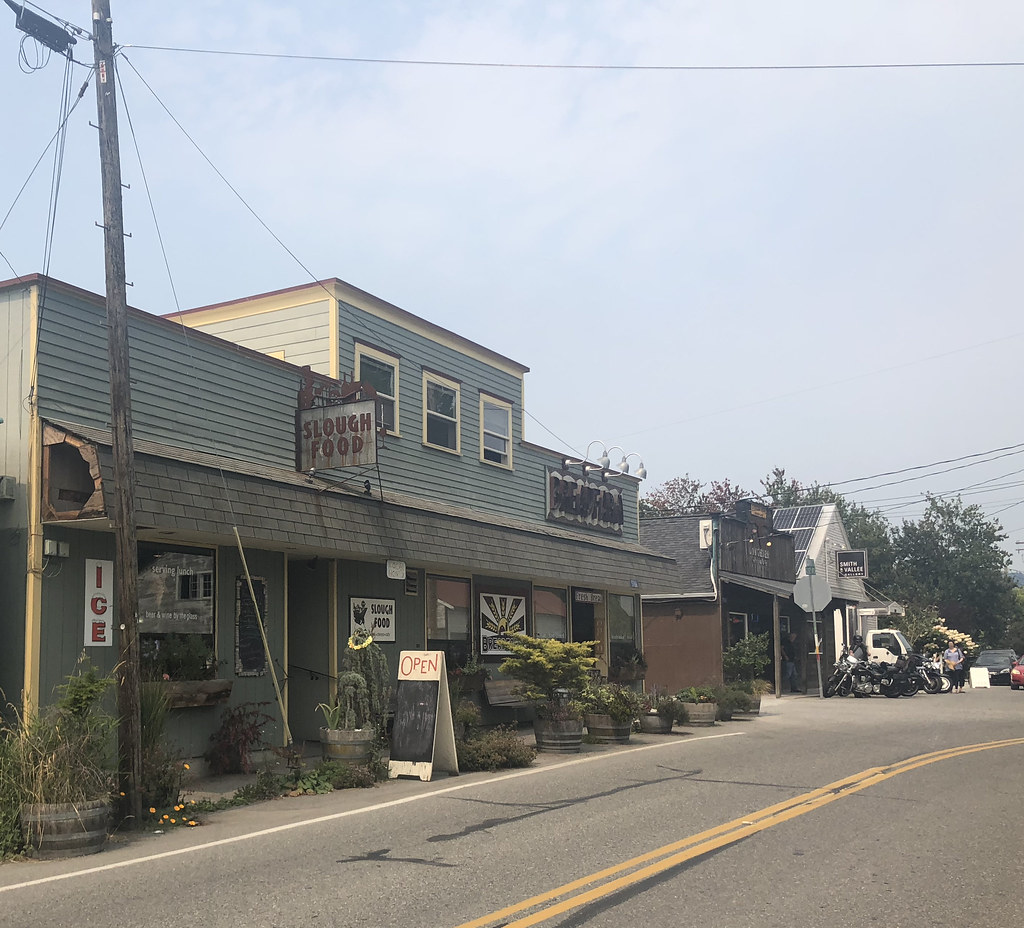 We stopped in the cute town of Bow for lunch and to visit a few of the galleries and shops there. I really wanted to try the tacos at Mariposa but they were closed for vacation. Tweets looked to have some good food but all the sandwiches looked huge and none of us were that hungry. We ended up at Slough Food, where I'd eaten before, and had a nice little lunch and some rosé out on their patio.

Back on the road, we arrived at the Lummi Island ferry dock where there was a pretty good sized line already. I've never been to the island on a weekend and the little ~20 car ferry fills up fast. Luckily it is only a ~10 minute crossing so the wait goes quick. 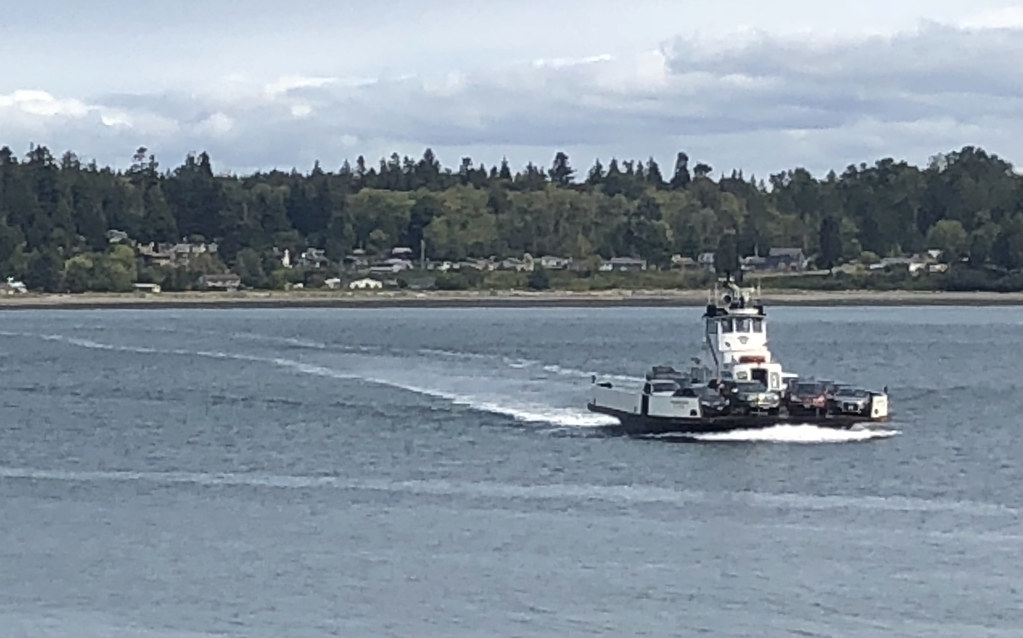 We drove to Willows Inn where we checked in, and then drove 1/2 mile back down the road to the Beach House. 27 steps down to the deck and we were in our own little slice of heaven! 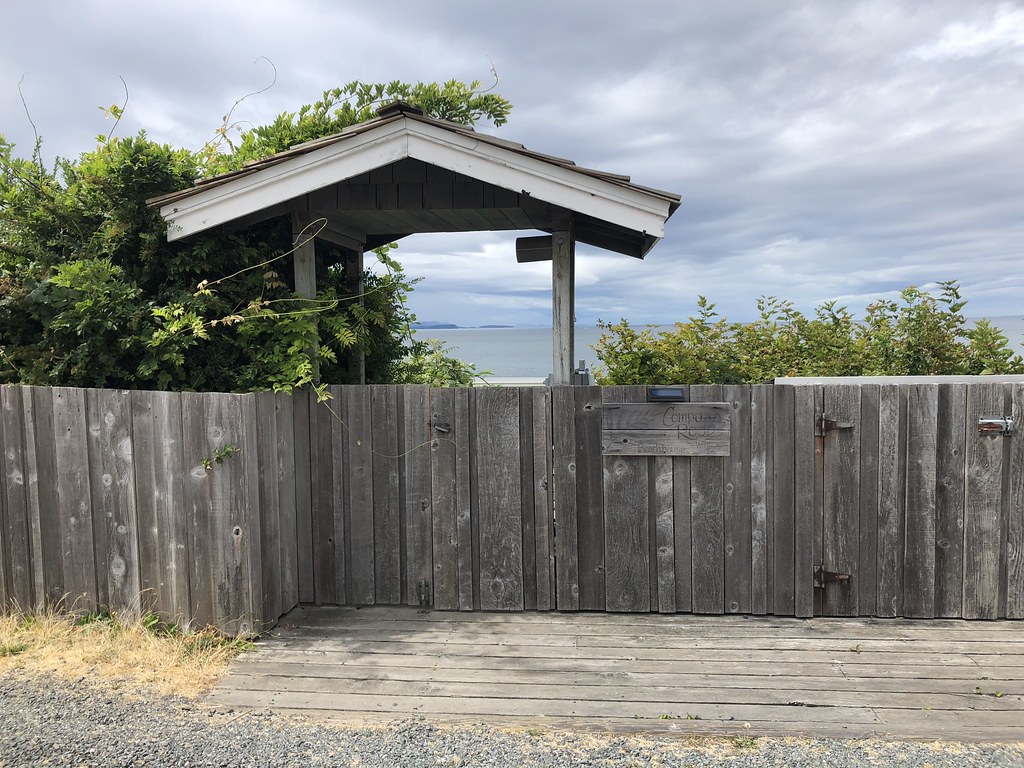 Ann had sweetly left us a chilled bottle of champagne, so we popped that and went for a walk along the beach, which we had all to ourselves! In addition to the big gorgeous deck, with it's dining table and adirondack chairs, the space also has a private fire pit and hammock. Unfortunately there was a burn ban due to summer wildfires in Canada and WA so we didn't get a chance to have a beach fire. 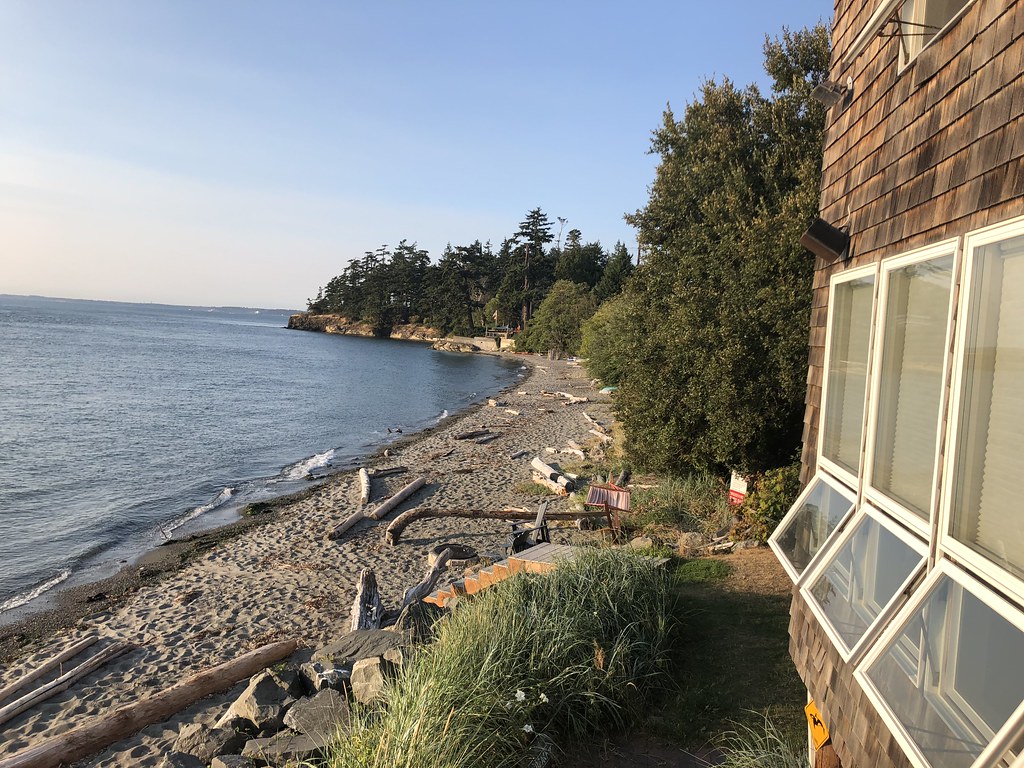 We spent the rest of the afternoon on the deck enjoying the amazing weather, watching sea lions play around a rock outcrop, hoping for a whale sighting, and catching sight of a bald eagle. With wine of course. 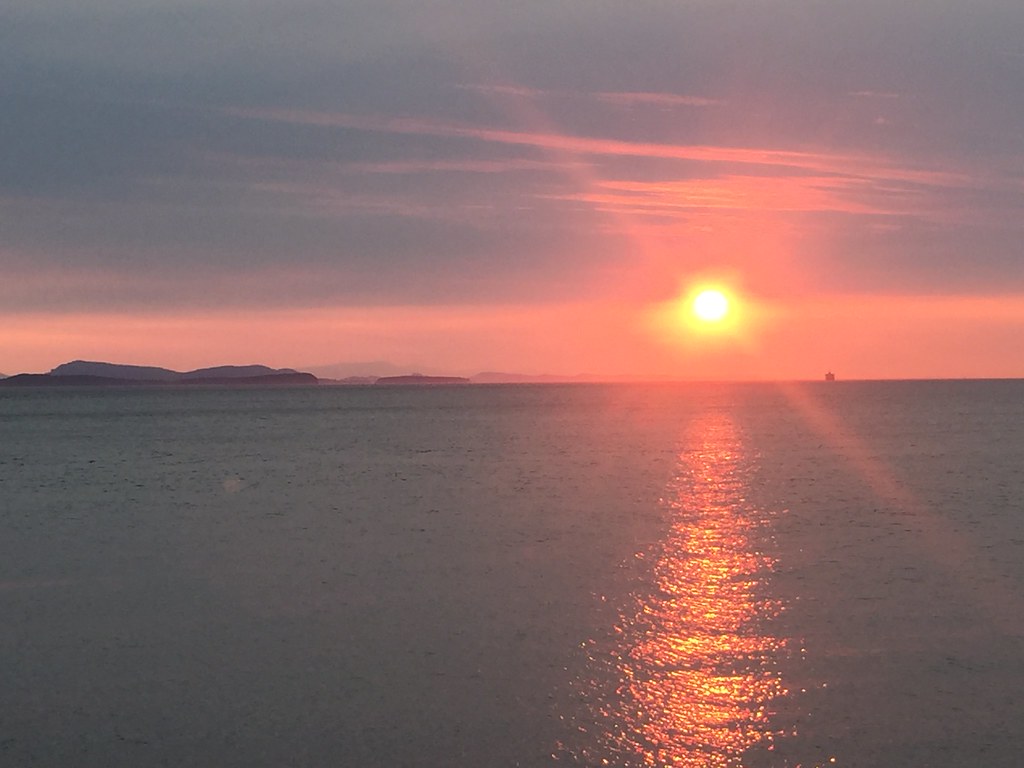 That evening I made us a round of Pimm's Cups and we put out a big cheese board. The island provides some of the best sunsets ever, this one was no exception, complete with one of the cruise ships from Seattle sailing north into it!

We stayed on the deck until late in the night watching the Perseid Meteor Shower. It was so incredibly relaxing! 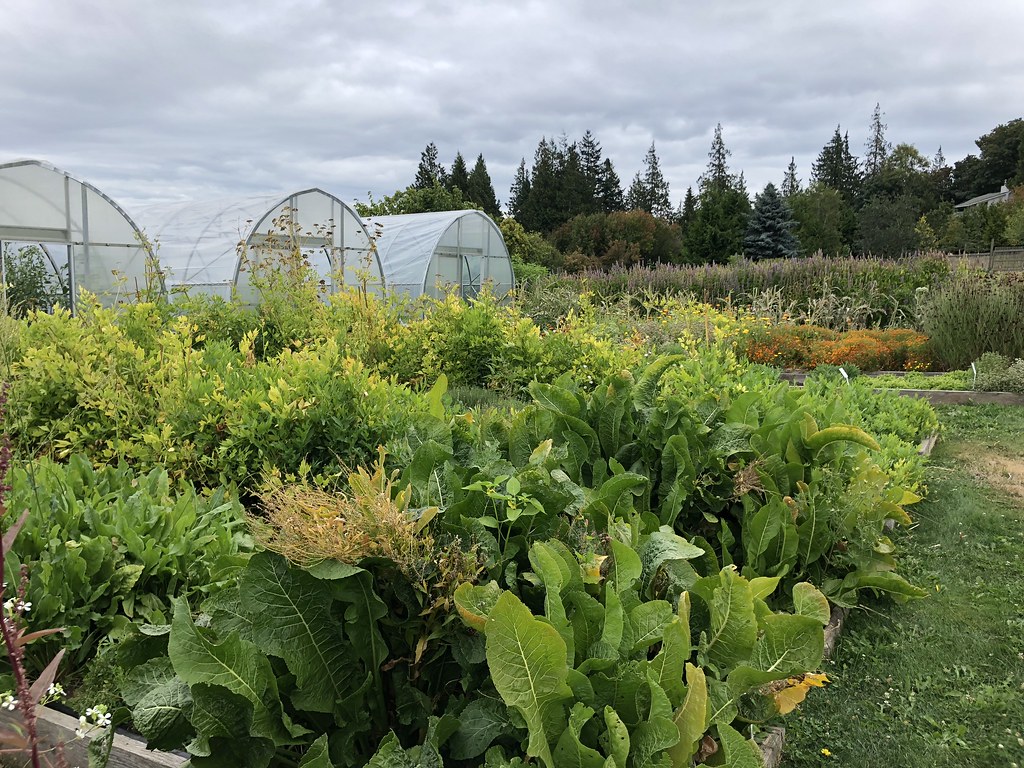 In the morning we joined others from Willows Inn for a tour of Loganita Farms. The farm grows fruits, vegetables, and flowers exclusively for the Inn. And we ran into Chef Blaine checking on the produce. 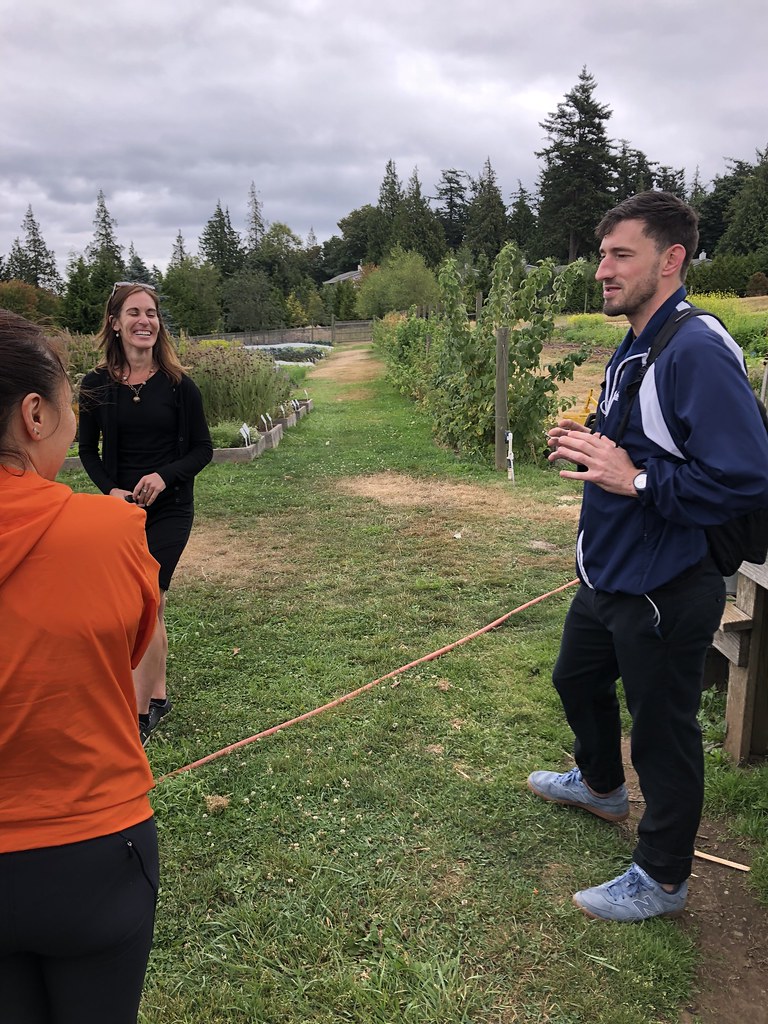 He had picked a melon and cut into it which was then offered to us to taste along with some cute little baby carrots and nasturtium seeds to take home and plant. It was a super fun, and tasty, tour! 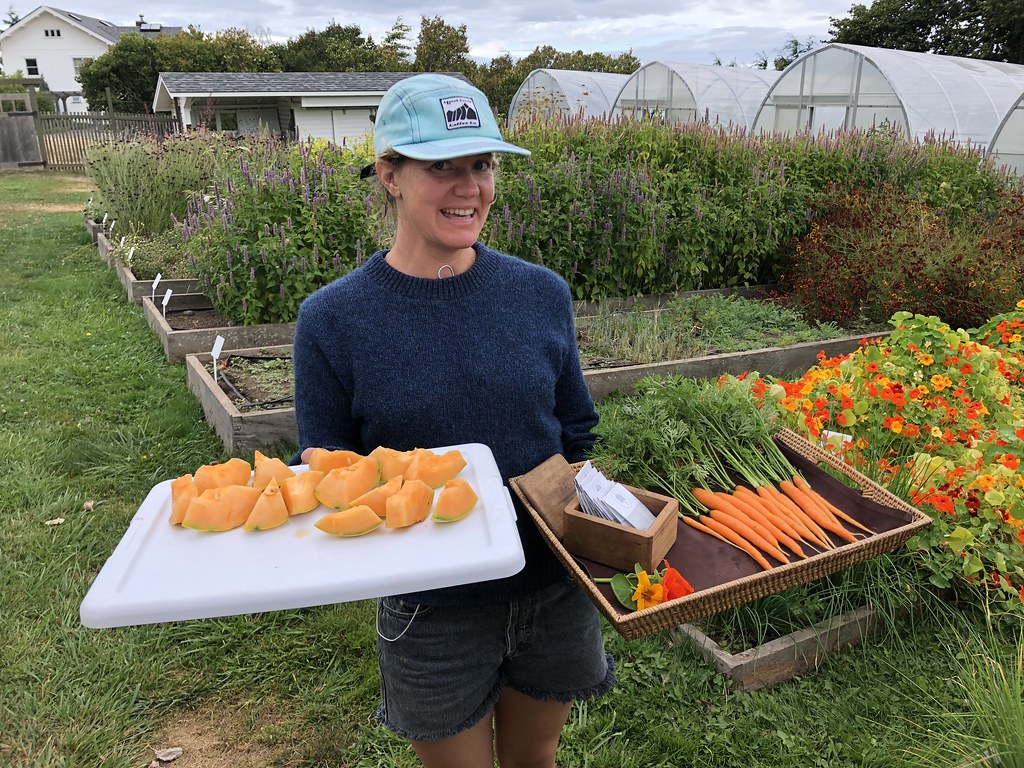 After the tour we decided to drive to the main part of town as we heard there was a farmers market on Saturdays. We couldn't help but to laugh when we pulled up and found one stand selling tomatoes and melons and two others selling crafts. Luckily we weren't relying on anything since we had completely over-prepared! 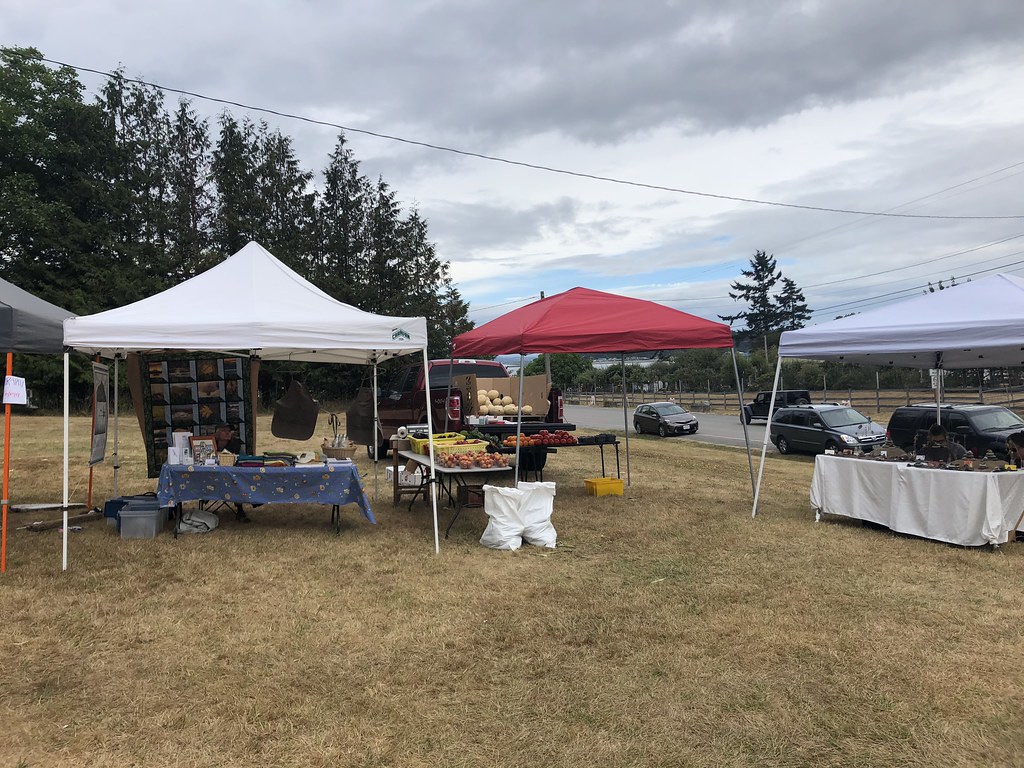 We took a little drive around the island heading south from the market. I hadn't been to this side before and it was interesting to see all the homes. We also saw quite a few of the resident deer which tend to hang out on the side of the road eating blackberries. 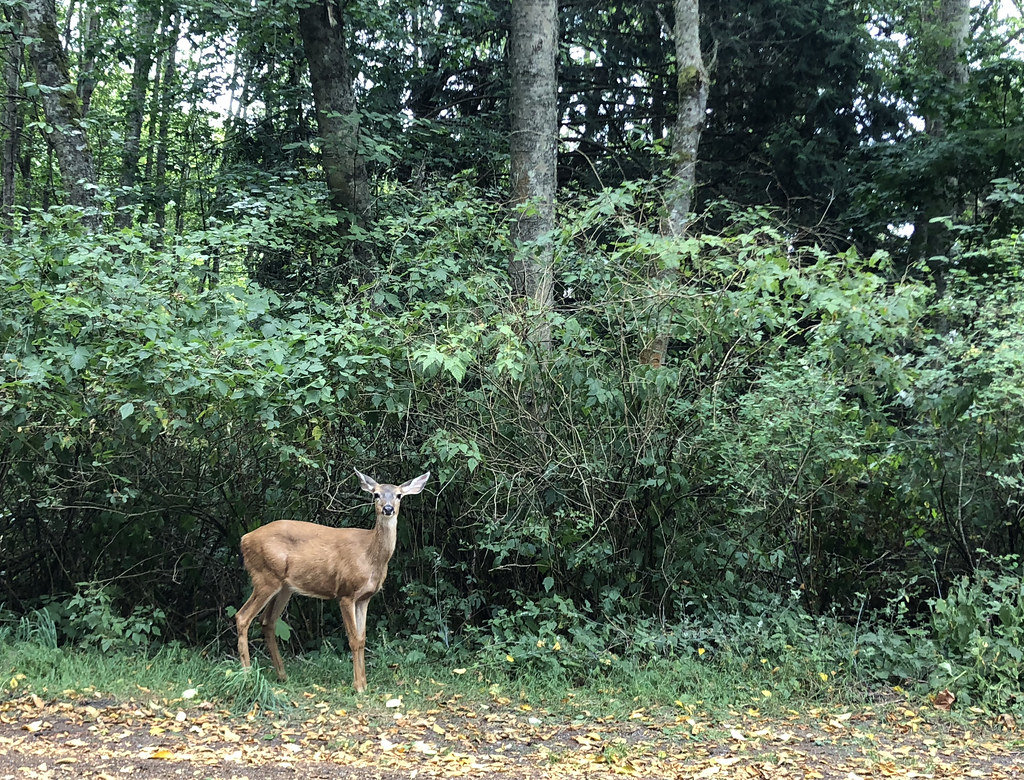 It was a short way to the church where we found the trail behind it, really a set of steps, that lead down to the beach for a little walk. Then we explored the cemetery when we came back up. 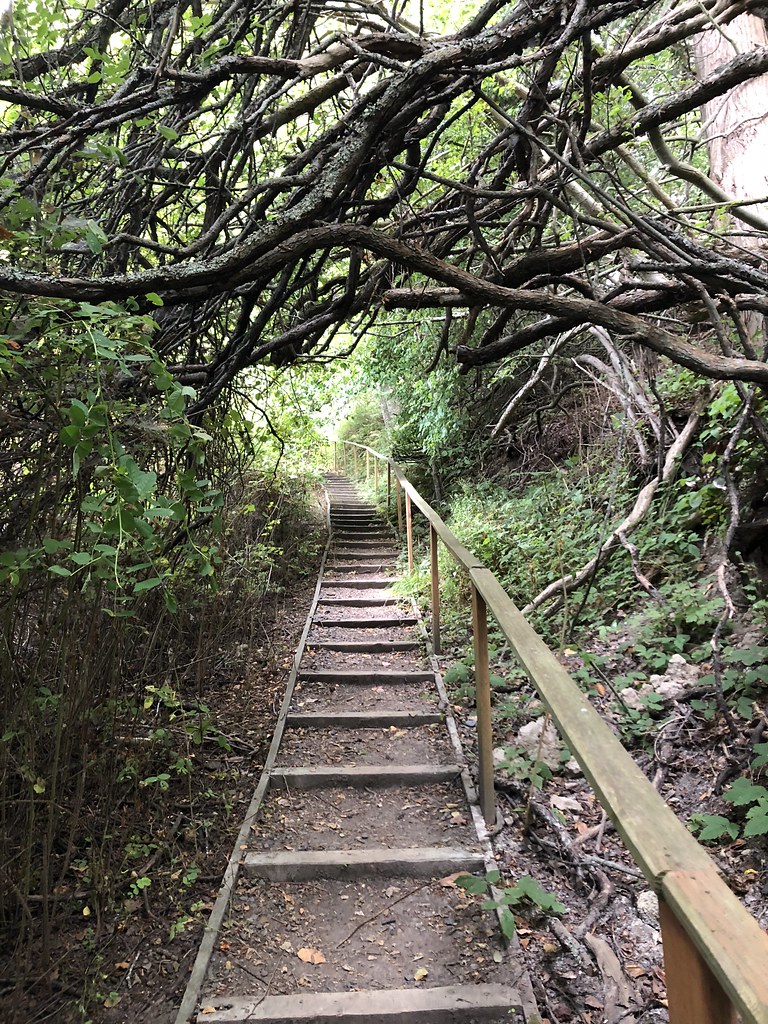 Our drive continued around Legoe Bay and we stopped again when we saw a cute shop next to a winery. The folks at Legoe Bay winery were very friendly and informative about the island but the wine wasn't to any of our tastes. They did have some articles about about the reef net fishing that happens in the bay in front of them which was super interesting. 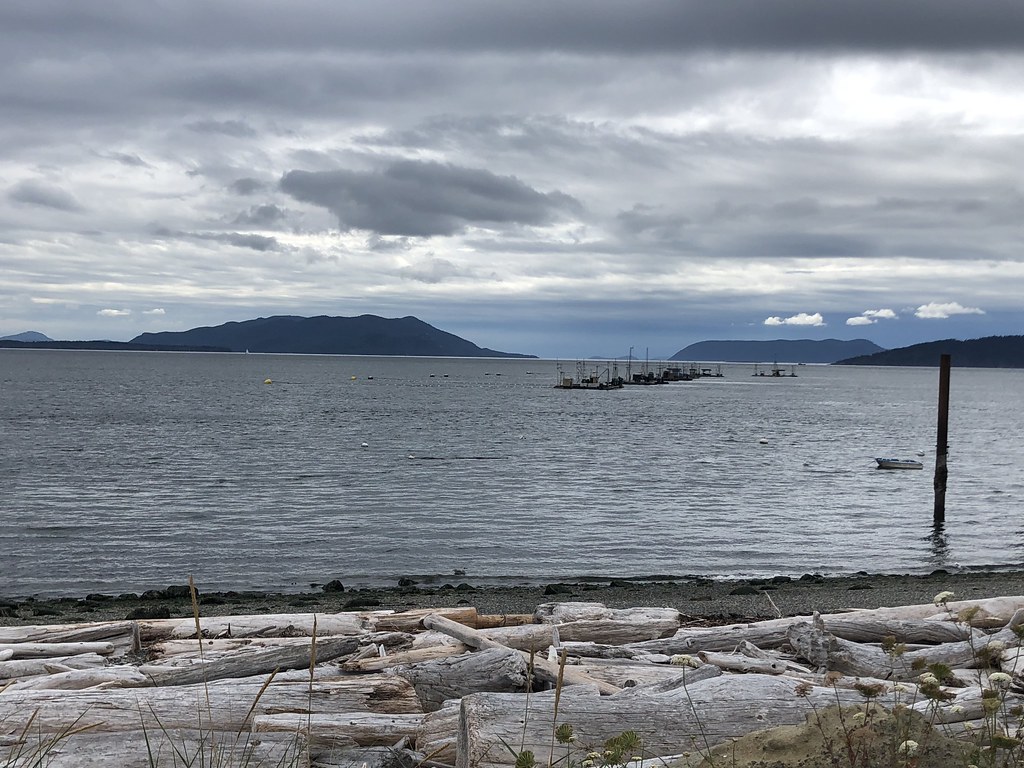 We returned home to the Beach House for lunch of burrata, peaches, tomatoes, and basil. Then we all just relaxed until it was Happy Hour. 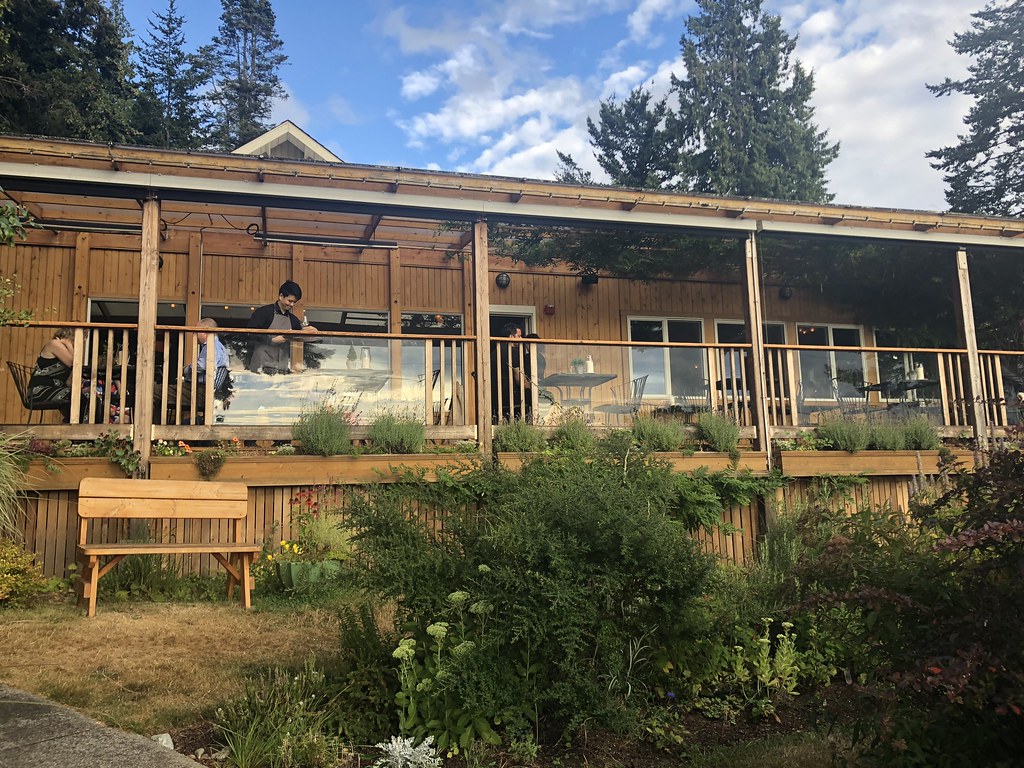 Even though we weren't having dinner at Willows Inn (the restaurant isn't able to provide vegetarian menus which my friends are) we were invited to come and have drinks on the patio. The sun had come back out for our 1/2 mile walk. The girls stuck with wine but I had a few of their lovely cocktails. 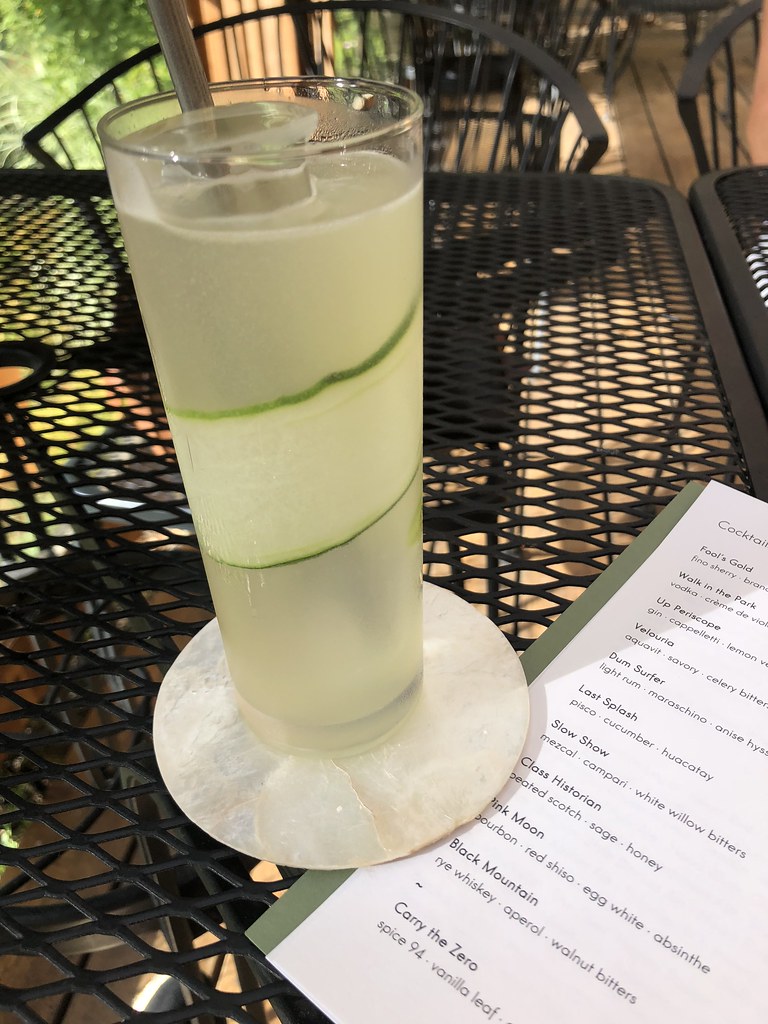 At 6pm dinner service starts at the restaurant and the kitchen starts sending out a few rounds of snacks to the diners enjoying drinks. We were very happy to also receive a few dishes, including the signature kale chips, and complimentary pours of their house hard cider. 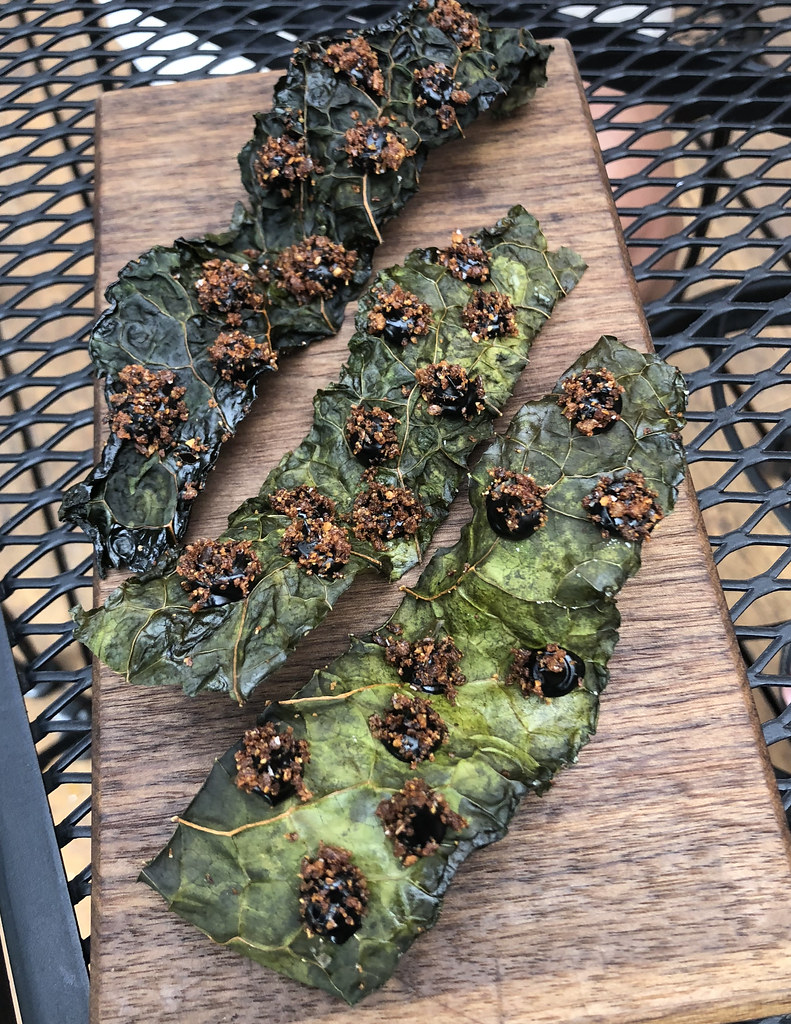 We headed home for sunset on our deck and continued watching for whales.  The night clouded up so no shooting star sightings but it was still nice enough to stay on the deck all evening. 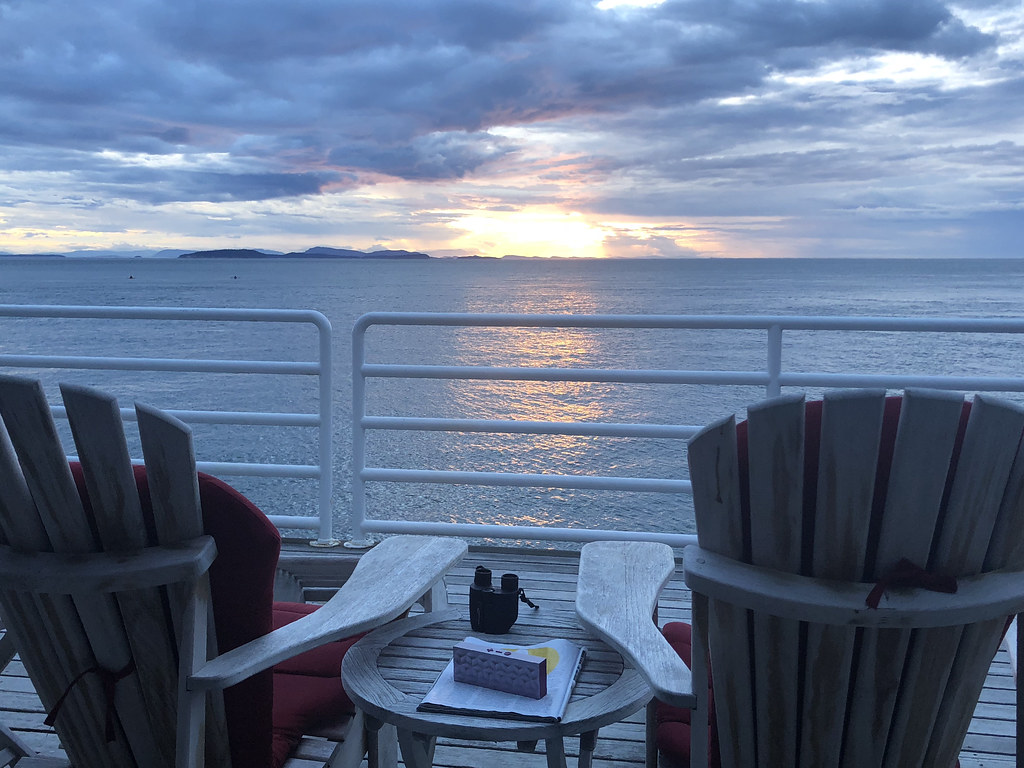 In the morning I made us pineapple mimosas and a blueberry baked pancake for breakfast. Once more we were able to enjoy our meal outside before packing up. 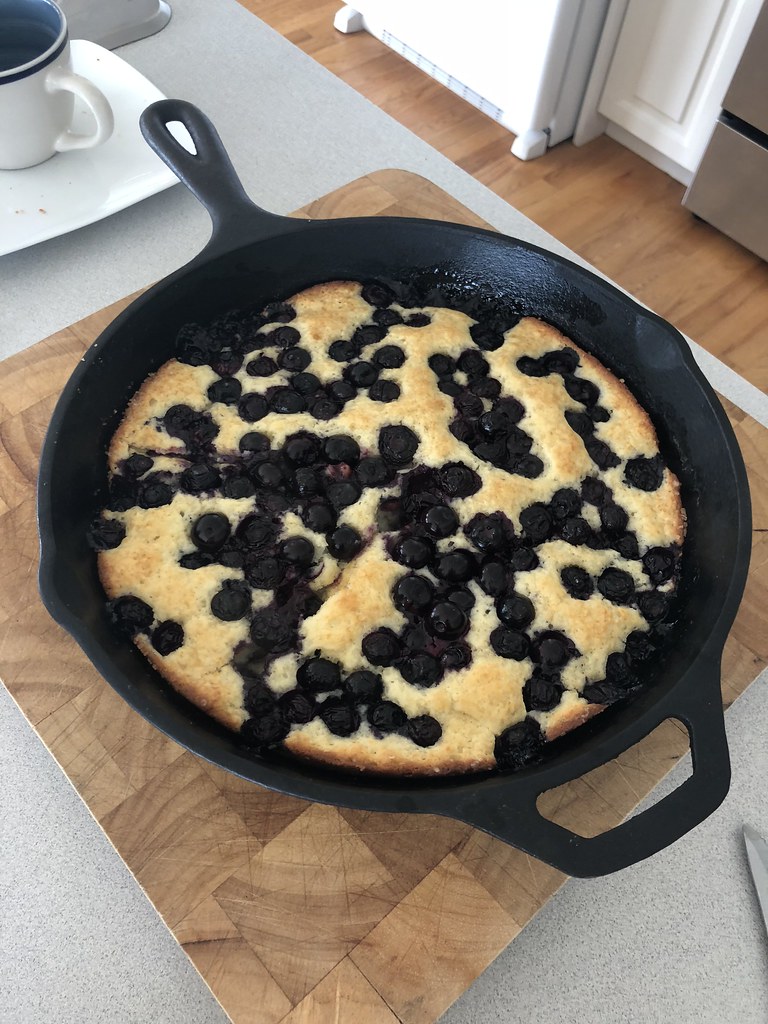 We were so sad to leave this wonderful Beach House! I have a suspicion that we'll be there again.

The ferry line Sunday morning was crazy long and we finally ended up on the 3rd one. We drove home on Chuckanut and stopped at The Oyster Bar for lunch. I expected it to be quite casual and was surprised by the linen tablecloth dining room. Lunch was great, as were our last views of the San Juan Islands. 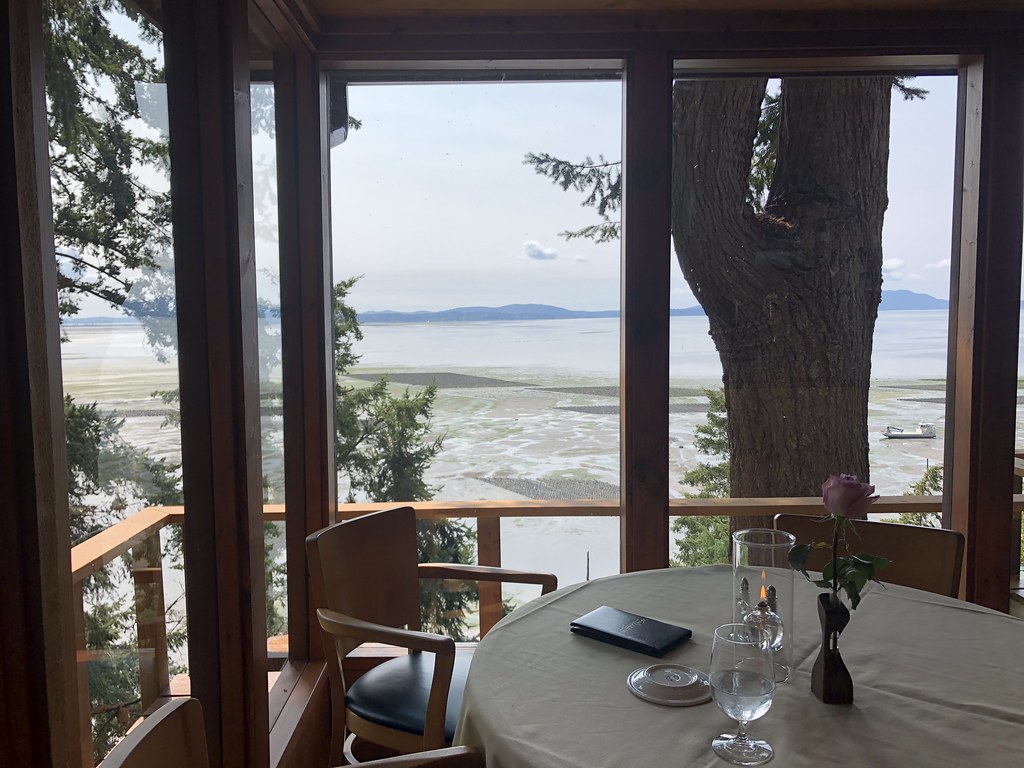 Five times to Lummi Island now and I've yet to see whales but I've always had gorgeous sunsets. I'll take it!