Our Airbnb was just 3 1/2 blocks from Copacabana Beach in the Zona Sol area of Rio. It was so easy to head down and rent a cheap chair and umbrella that for me it didn't matter if I spent the day or just an hour! I wanted to be on that absolutely beautiful sandy stretch, the waves crashing, the views of Sugar Loaf in the distance, people enjoying their friends and family. This is the postcard view of Rio that the world sees and indeed it is gorgeous. 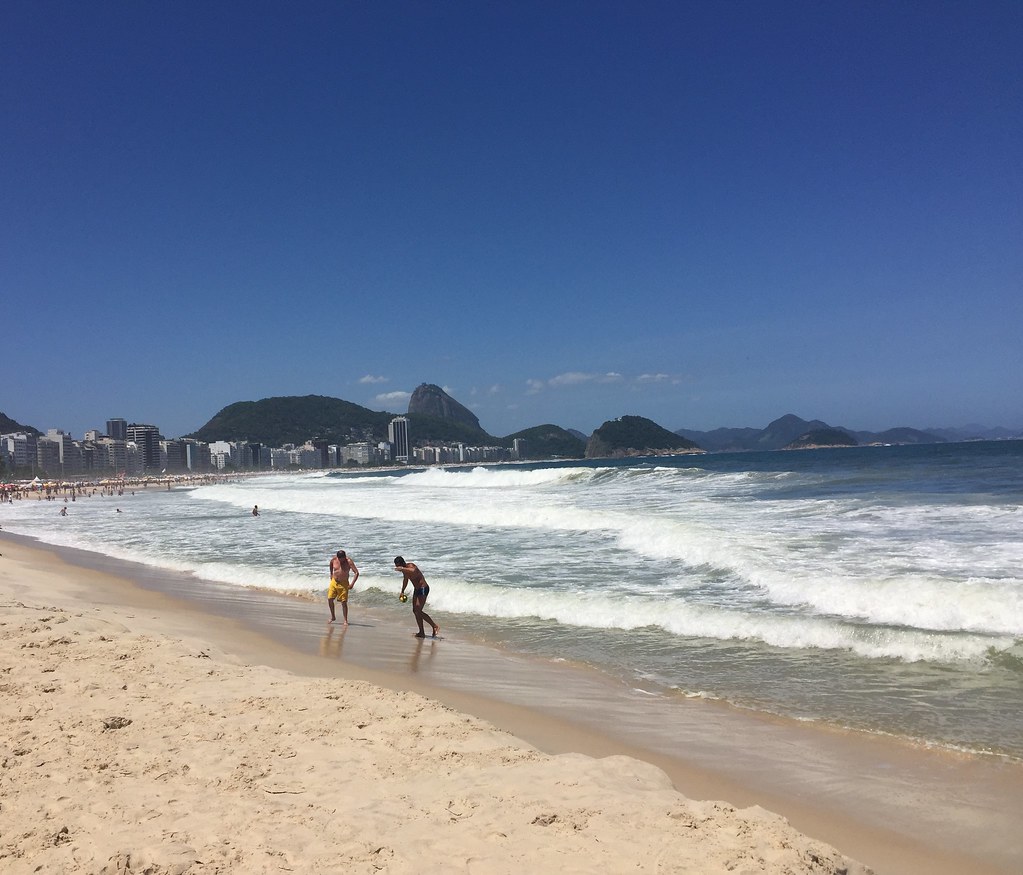 One cloudy but warm afternoon Forest, Thibault, and I headed to the beach to hang out for a while and get a bite. As I mentioned when I wrote about Ipanema, beach vendors in Rio sell an amazing variety of snacks and beverages. After watching the parade of choices go by, we decided on grilled cheese "kabobs". This man carried a cooler in one hand and a portable charcoal grill in the other. He placed skewers of a firm cheese, similar to halloumi, on the grill and after they were warmed and marked by the grill he dipped them in dried herbs. Brilliant. Also can you imagine carrying a hot grill around all day? 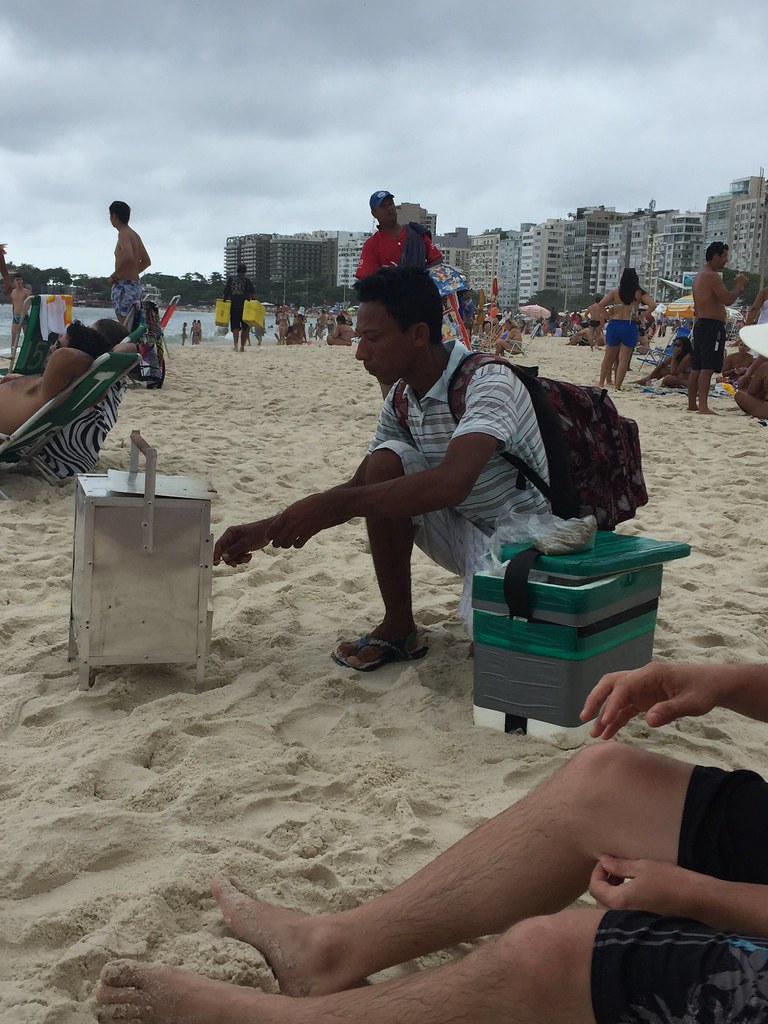 We also watched as a group of young men, armed with cases of beer and huge bags of ice, spent some very productive time digging a big pit in the sand. They systematically layered the beer and the ice in the pit, putting a final layer of ice on top. Satisfied with their work, they sat back and enjoyed their cold beer from their "Brazilian Ice Chest" as I called it since I had seen this done on Ipanema as well! 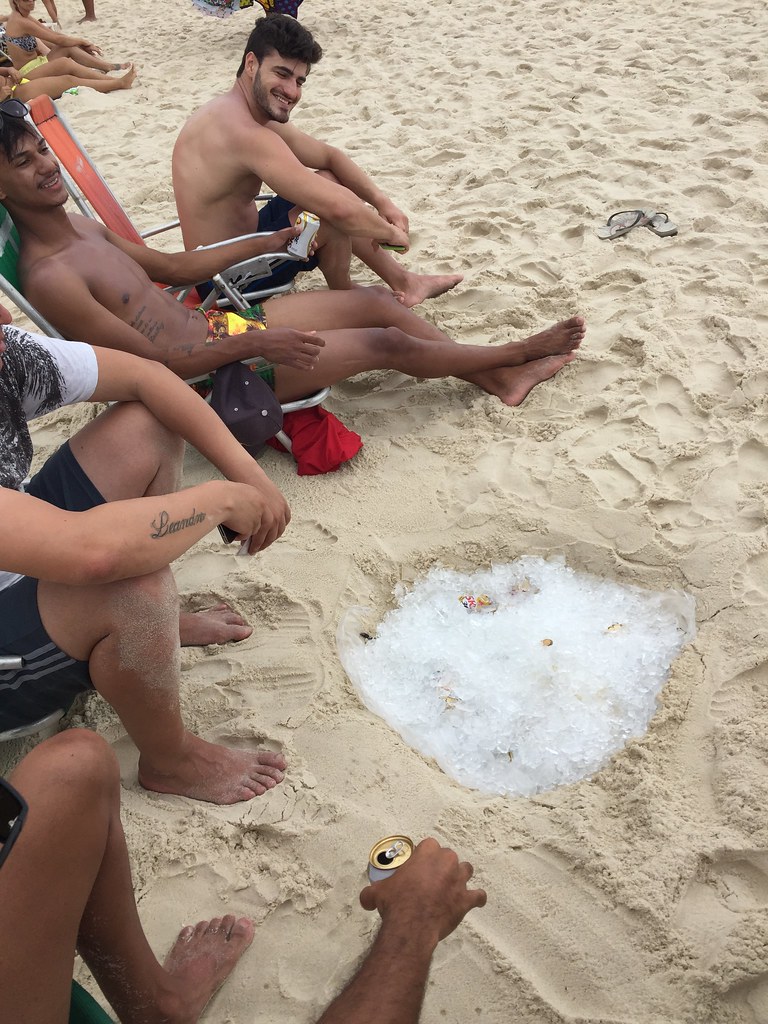 Some days the beaches seemed to have lots of tourists, while other days it was mainly locals. One day when Thibault and I went down late in the afternoon the waves were huge and most people stayed out, heading the red flag warnings. Others decided the fun was worth the risk. 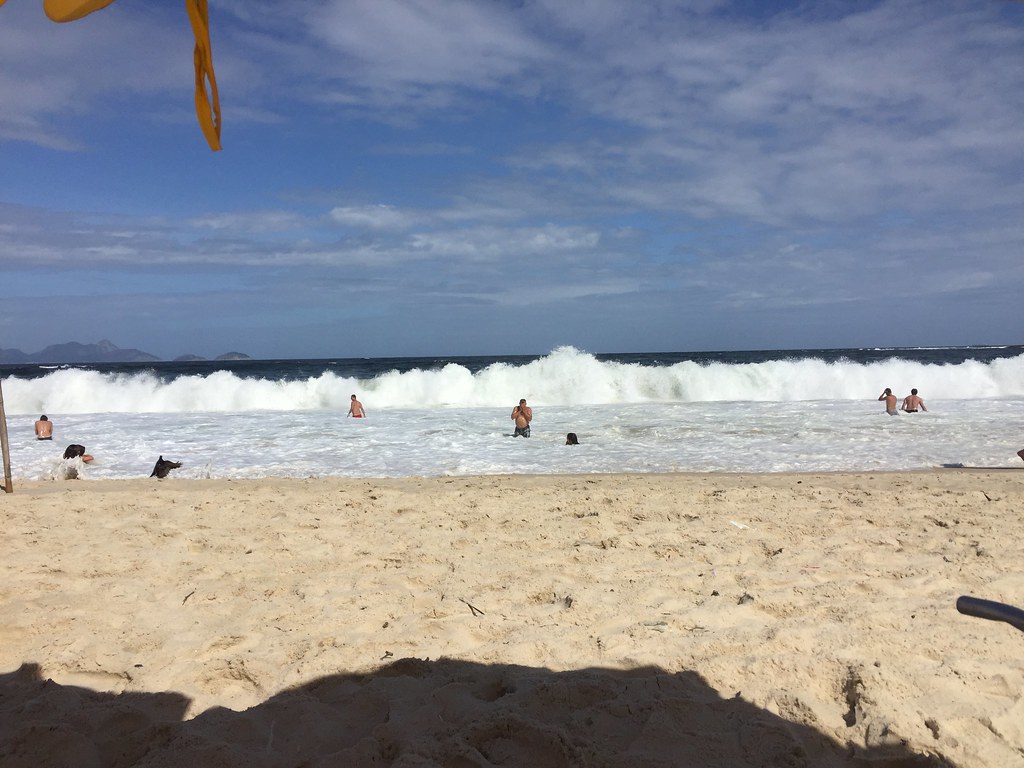 But most days the beach was just peaceful and perfect. I didn't swim as I am very aware of both the water pollution problems and also the undertow that takes swimmers out even in calm conditions. Just being on the beach daily, with its perfect breeze and stunning views was heaven for me. 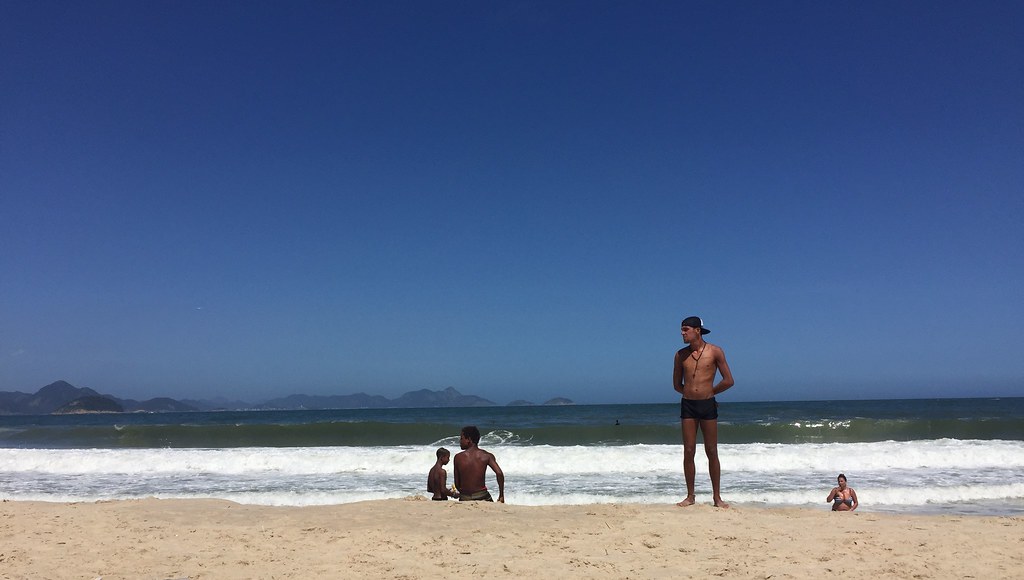 And always there was the parade of vendors and their offerings; empanadas, caipirinhas, cookies, bikinis, shrimp (!), beach blankets, etc. 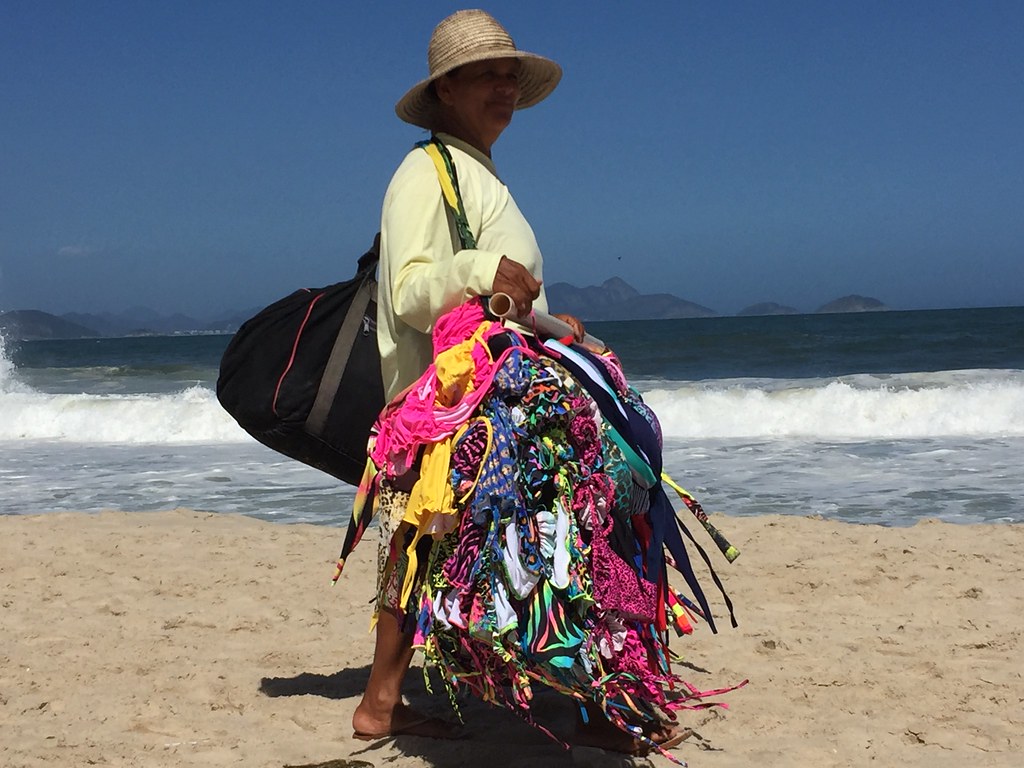 There's more to Rio than the beach of course. If you find yourself there on a Sunday, the thing to do is the Hippie Fair in Ipanema. It's a big fun, open air market which sells a lot of the same clothes and jewelry that you see on the beach, but also some local artwork and crafts. It doesn't take long to walk around and you might even find a new painting to take home! 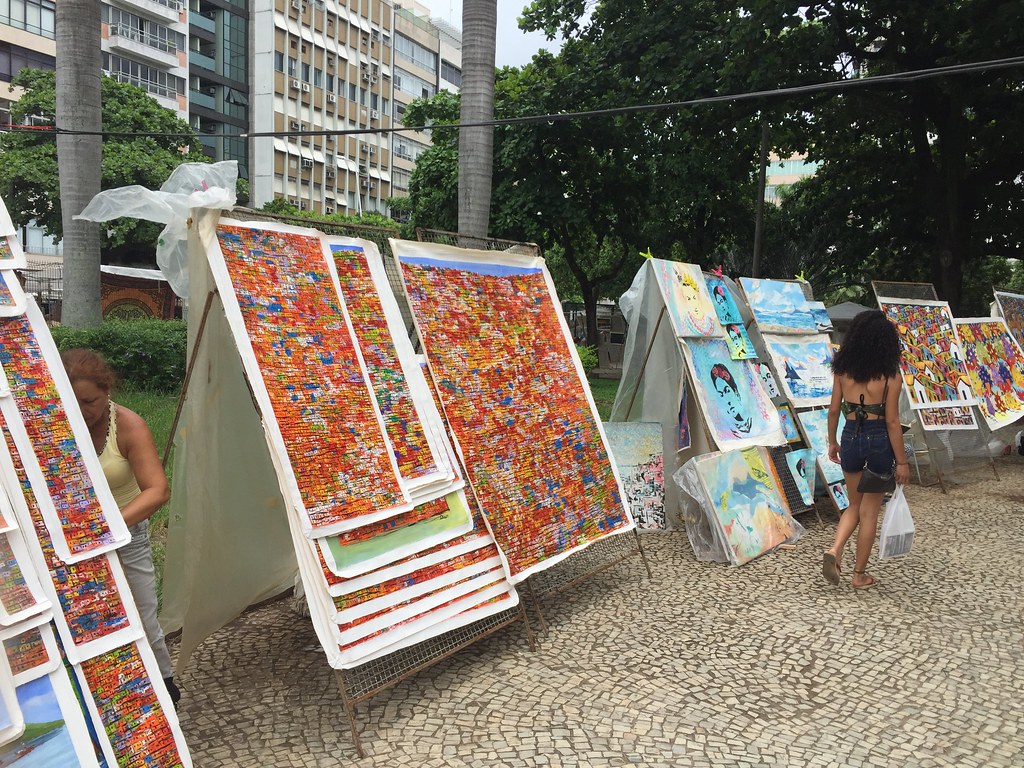 Just down the street from the Hippie Fair is Casa de Feijoada. Now typically Cariocas eat feijoada, the national dish of Brazil, on Wednesdays and Saturdays. But I'm not a Carioca and I was hungry. We arrived, put our name on the wait list, and grabbed a few beers at the bar next door. Finally we were called in for what ended up being an absolutely delicious and super fun lunch.

The menu starts with a light lime cocktail and a small cup of super tasty black bean broth. From there you choose which meats you prefer for your feijoada stew (we chose to not have pig ear, feet, or tongue) and then a ridiculous amount of food comes to your table. There are sides like rice, manioc, both fried and sauteed, cooked greens, oranges, and chicharrones. 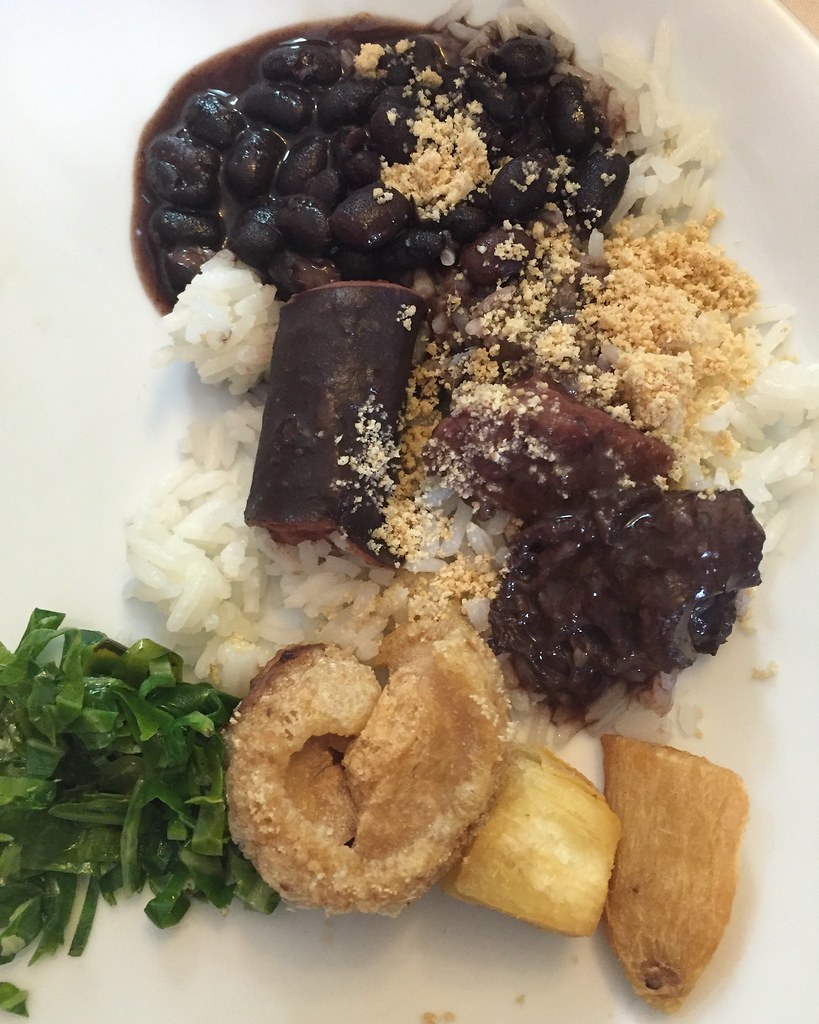 To finish they brought us a plate with three slightly unappetizing looking "jams" on it. They were incredible though; dulce de leche, banana compote, and coconut and pumpkin chutney. We were full for hours! 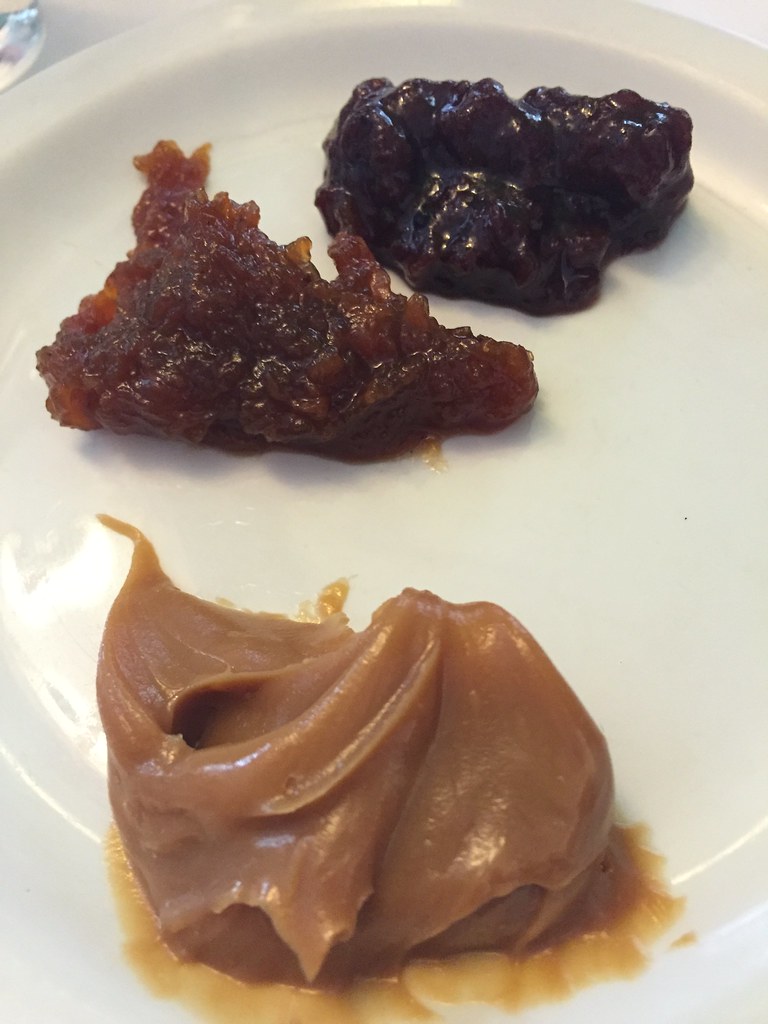 Many would say no trip to Rio is complete without getting up close and personal with the two big attractions- Sugarloaf and Jesus. Could also be a great band name. In any case, I'd agree they are more than worth the effort.

We took a cab to Sugarloaf (Pão de Açúcar as the locals call it) for about R18, and got there at 10am right before the lines got crazy long. The views from both the mid and upper areas are absolutely spectacular. We spent about an hour taking it all in and wandering around.

You can also sign up for helicopter tours over Rio from here. We watched a few take off, the rides are pretty short but I'm sure it's an incredible sight! 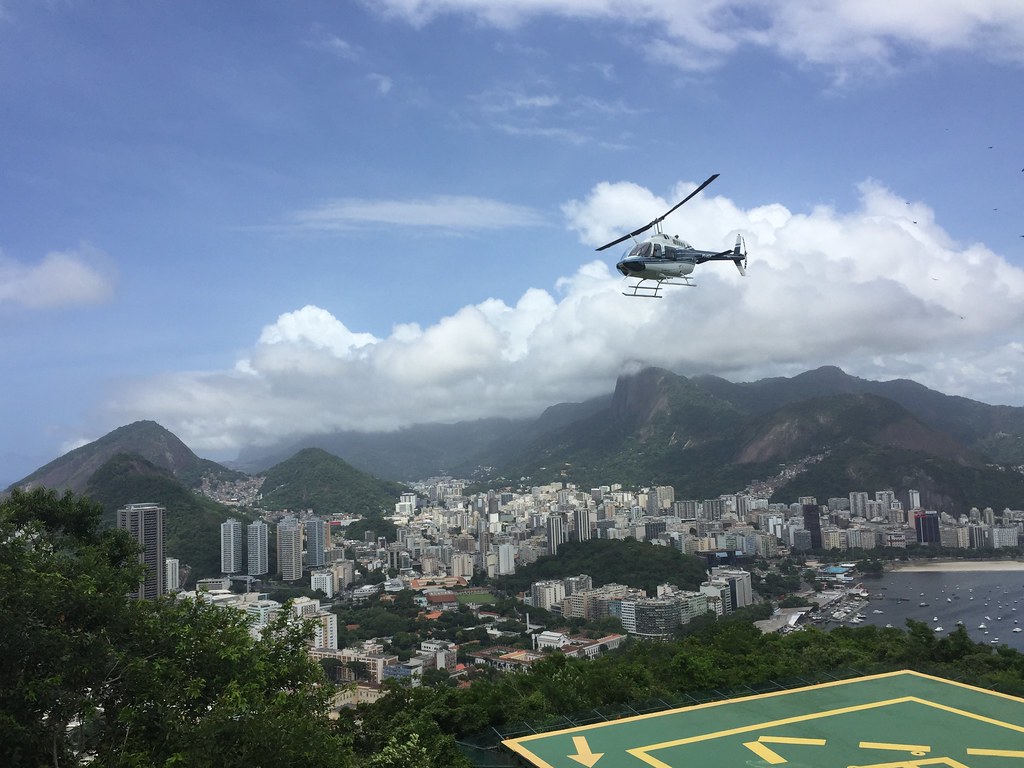 The next day we took a taxi to the train station that heads up Corcovado to Christ the Redeemer. We bought our train tickets in advance online which saved us standing in massive queues at the station. The train heads up a very steep slope, passing a few favelas, and lending dramatic views of the sea along the way. After about 20-minutes we reached the top and headed up a few stairs to where Jesus stands. 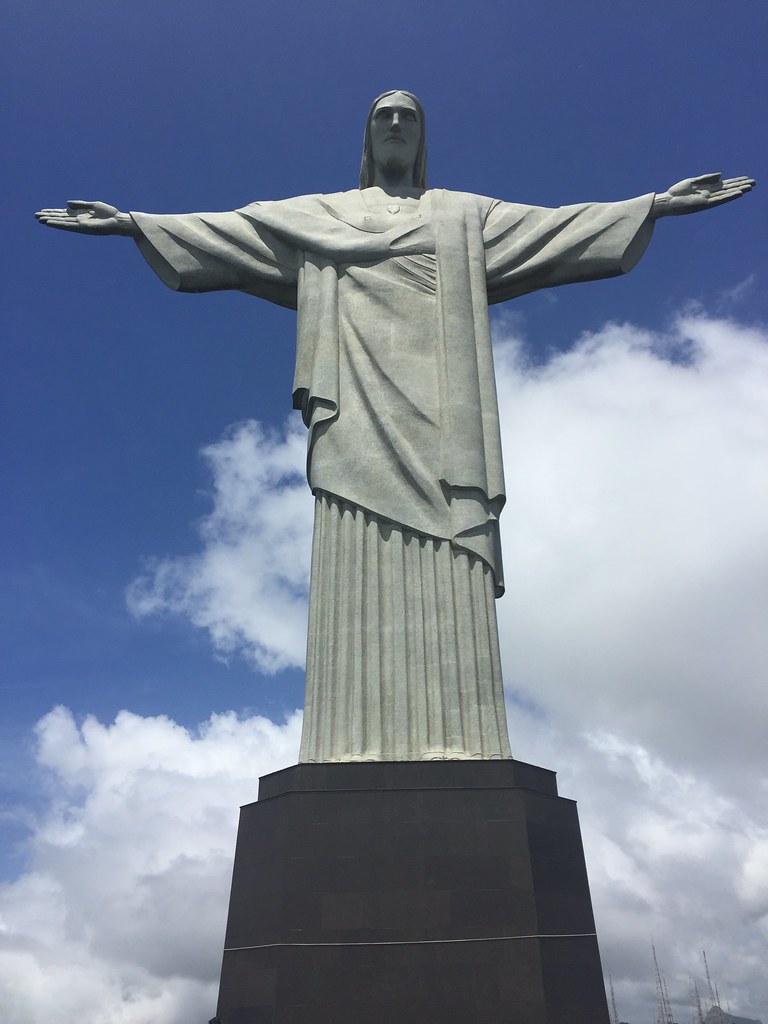 Again, the views of the city below are incredible. And the statue is pretty impressive as well. I especially enjoyed sitting for a few rounds of caipirinhas; it isn't every day you get to drink with the big guy after all! 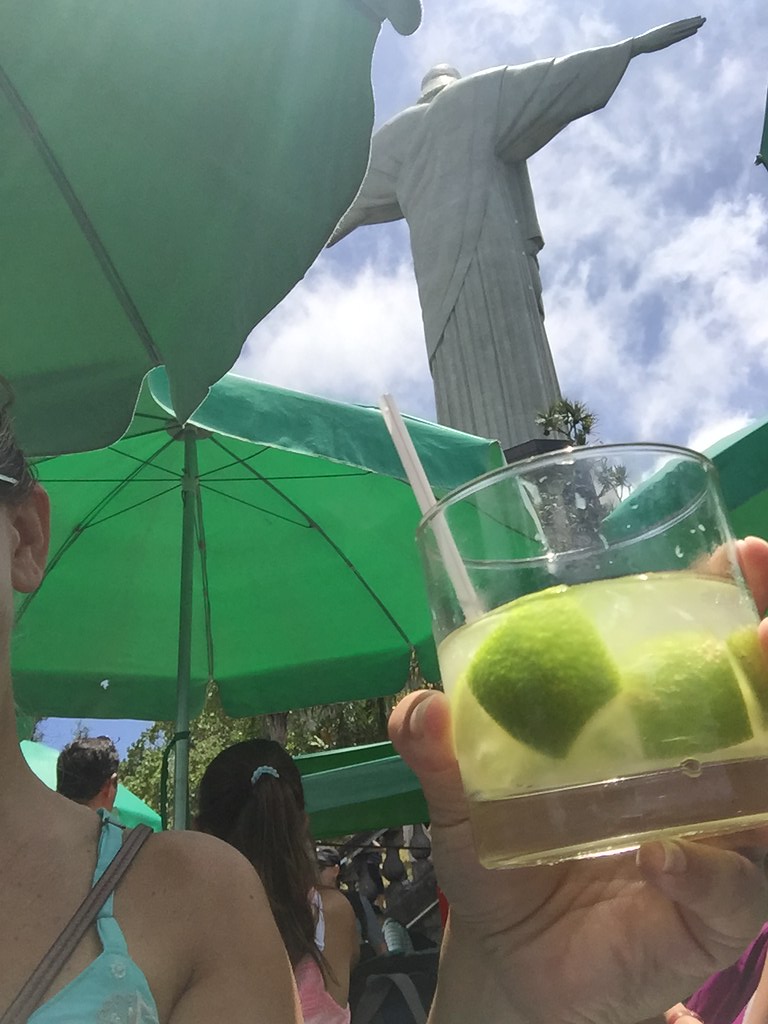 A friend had advised doing these two attractions on different days and I think that was a good move. It was nice not to be rushed and to get to each before they got super crowded.

Rio also has the most amazing sunsets I have seen. The one on Christmas Day from our roof top was a very nice intro. It's also great to join the crowds and experience seeing it from the beach itself. Kate and I opted to enjoy sunset one evening with drinks at The Arapoador Hotel Ipanema beachside bar. I'd recommend you do the same! 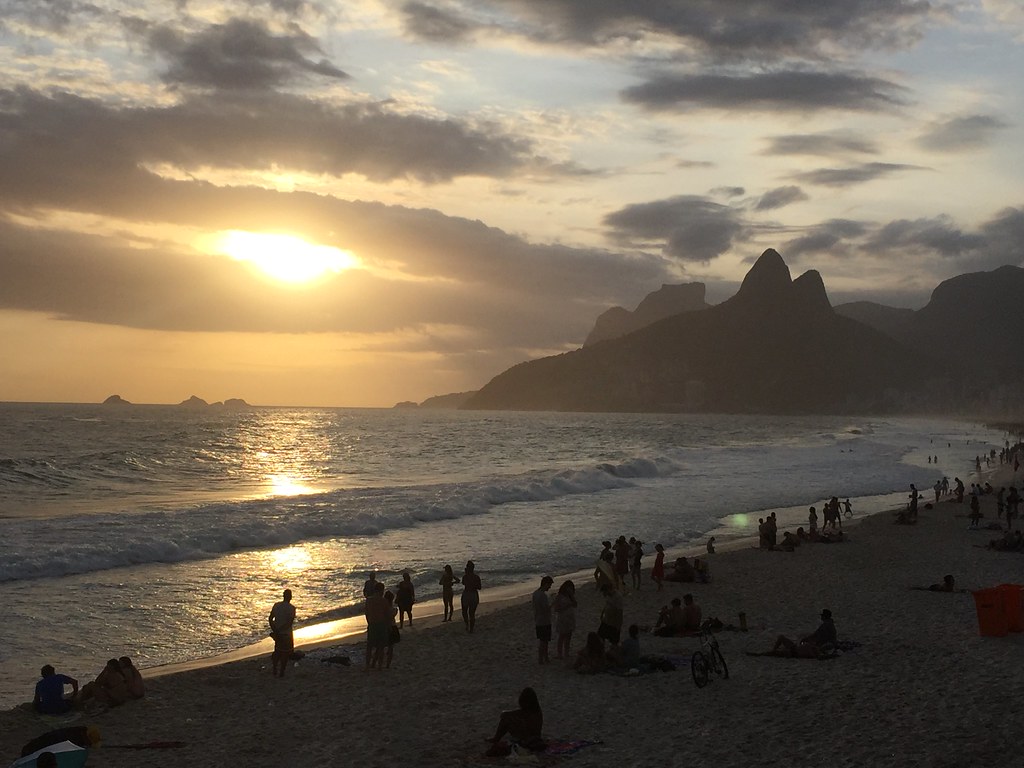 Besides spending time on Copacabana Beach, we also spent a very nice afternoon at the Copacabana Palace Hotel. The place is swank, and they have impressive manners. In fact I think their manners kept from inquiring if we were actually guests there while we enjoyed lunch and Thibault took a dip in the pool on an especially hot afternoon! 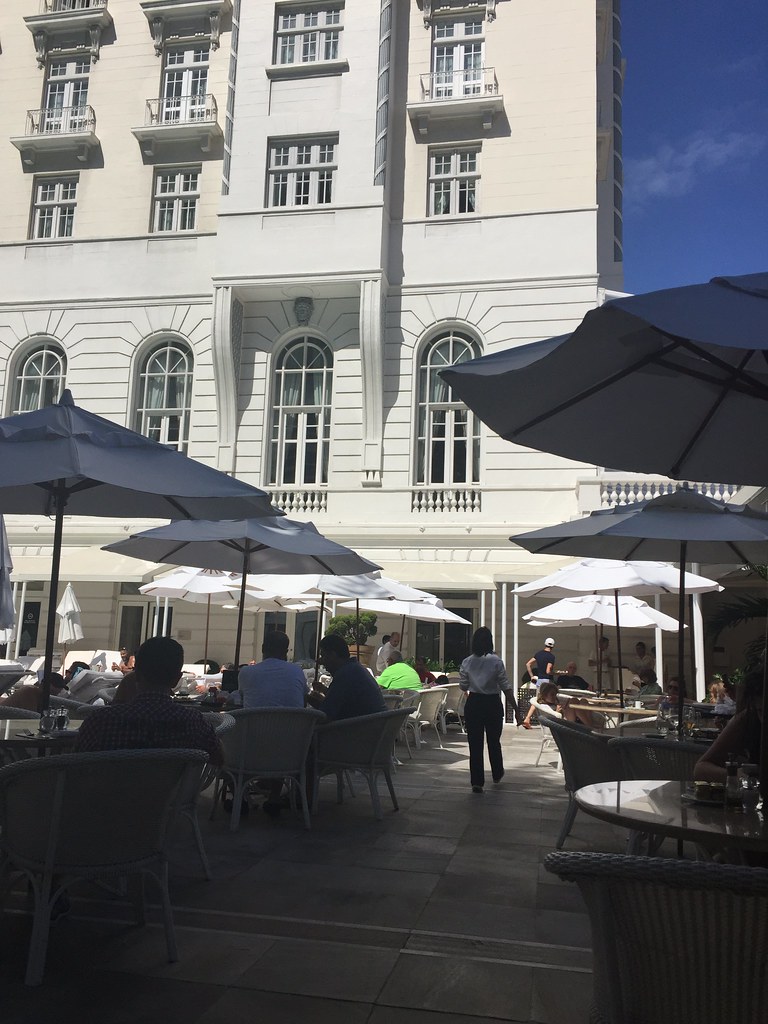 Back on Copacabana Posto 5, the folks at Barraca Das Morenas 156 took great care of me. Since I was making a daily habit of coming here, they knew when they saw me that I wanted an umbrella, a chair, and a cold caipi. They knew my name by the 2nd day, calling out "hello Wendy!" as they wrote down my "order" and set me up wherever I wanted. 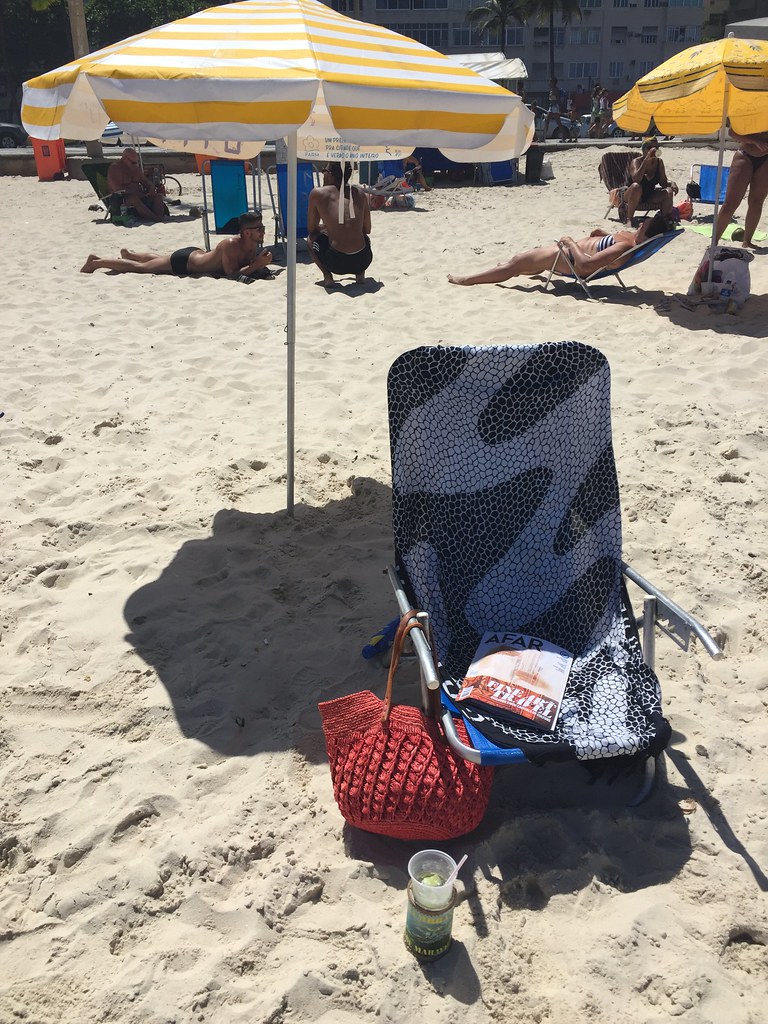 When I said goodbye on my last day, the guy responded as normal, "see you tomorrow Wendy!" I told him I was flying home that night and he seemed surprised. He came around the stand and gave me a big hug, walked me up to the street to the faucets where you rinse your feet, brushed all the sand off of mine and helped me put my Havaianas on before telling me how much they'd miss me and to come back soon.

I had read that when you go to the beaches in Rio you should find a good kiosk or barraca first. People pick their beach spots by the service they get at these little businesses. I had certainly found a great one.  Go visit 156 if you are in Copacabana and tell them Wendy says hi! 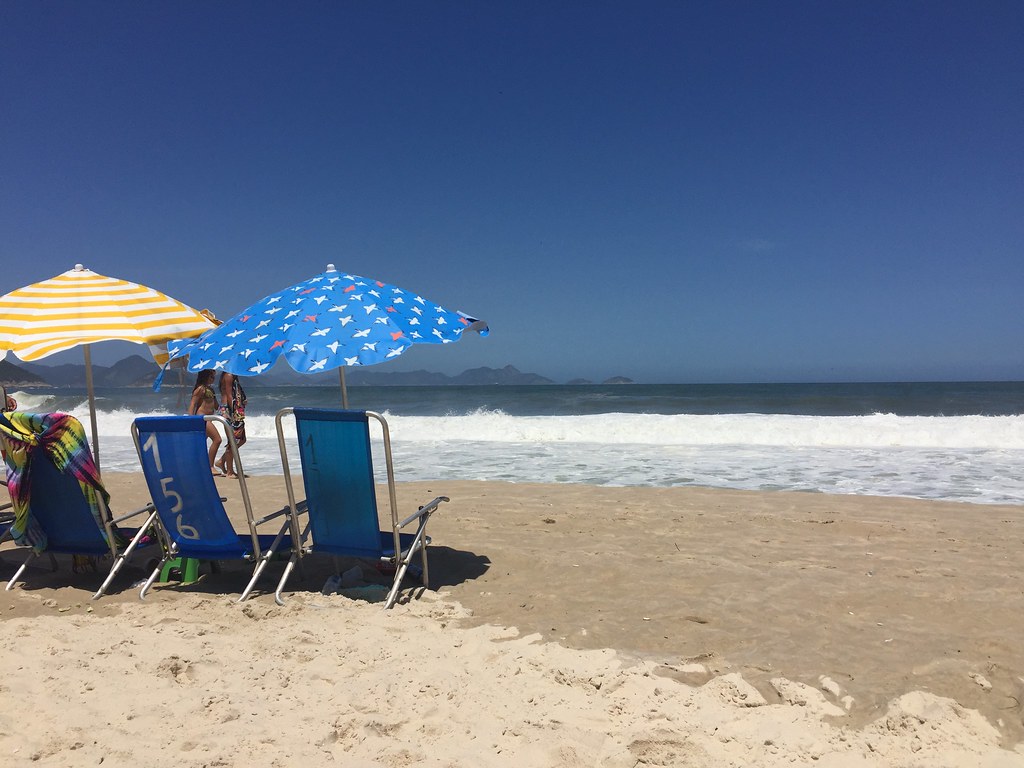