After spending Christmas on Ipanema Beach in Rio, we hopped a flight to Iguazu. There are two airports and we flew into the Brazil side based on cost and schedule.  We grabbed a taxi and headed to the Argentina side, which is where we were staying. The drive was short but the line at the border, even being late in the evening, was extremely long. Taxi from the airport in Brazil to our hotel in Iguazu, Argentina was about 140 Real. 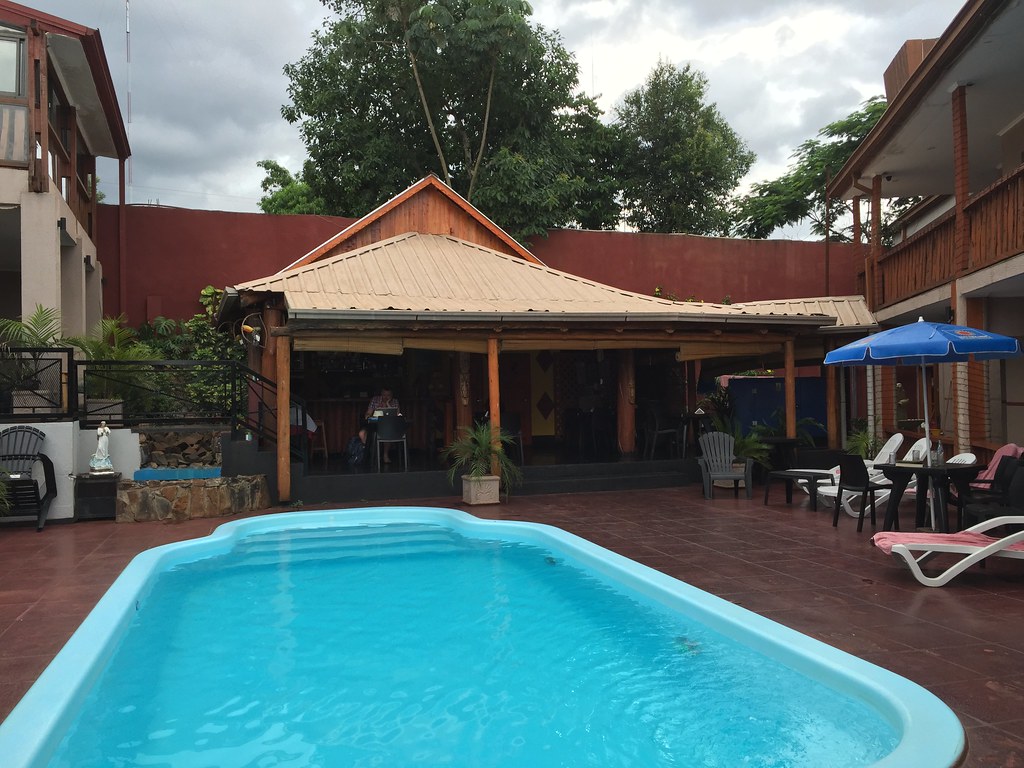 It took some time and questioning a few of the locals before our taxi driver found our hotel- TTupa Boutique Hotel.  I consider this more of a motel, approximately ten rooms, all with kitchenettes and living rooms, with front doors leading out to the pool and breakfast/ bar area. Rooms were bare but adequate and, as we saw when we walked around town, there wasn't really any place we would have chosen that looked nicer. Our breakfast was included but unfortunately each day it was barely more than some sad looking fruit and various breads. I got by with dulce de leche on toast along with cafe con leche. I'm all about the milk products apparently. 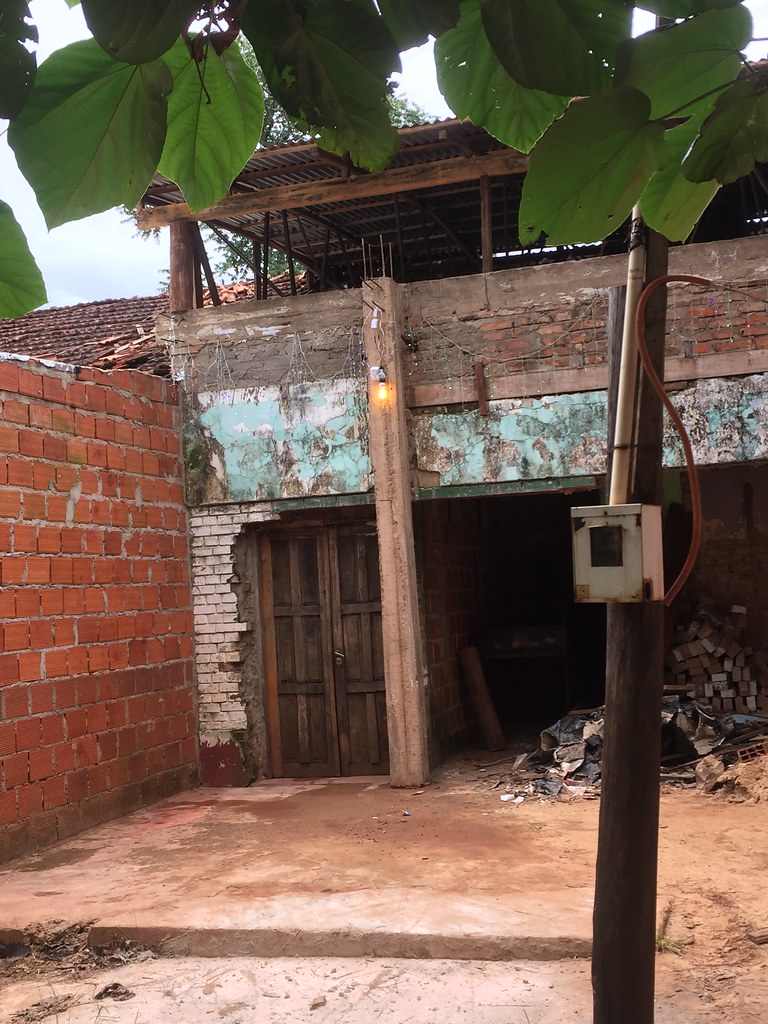 In the morning, we set out for a walk around town and found red dirt roads, many boarded up businesses, overgrown yards, and crumbling homes. Perhaps Iguazu was once a thriving destination, or perhaps they had planned to be, but it seemed full on third-world now. 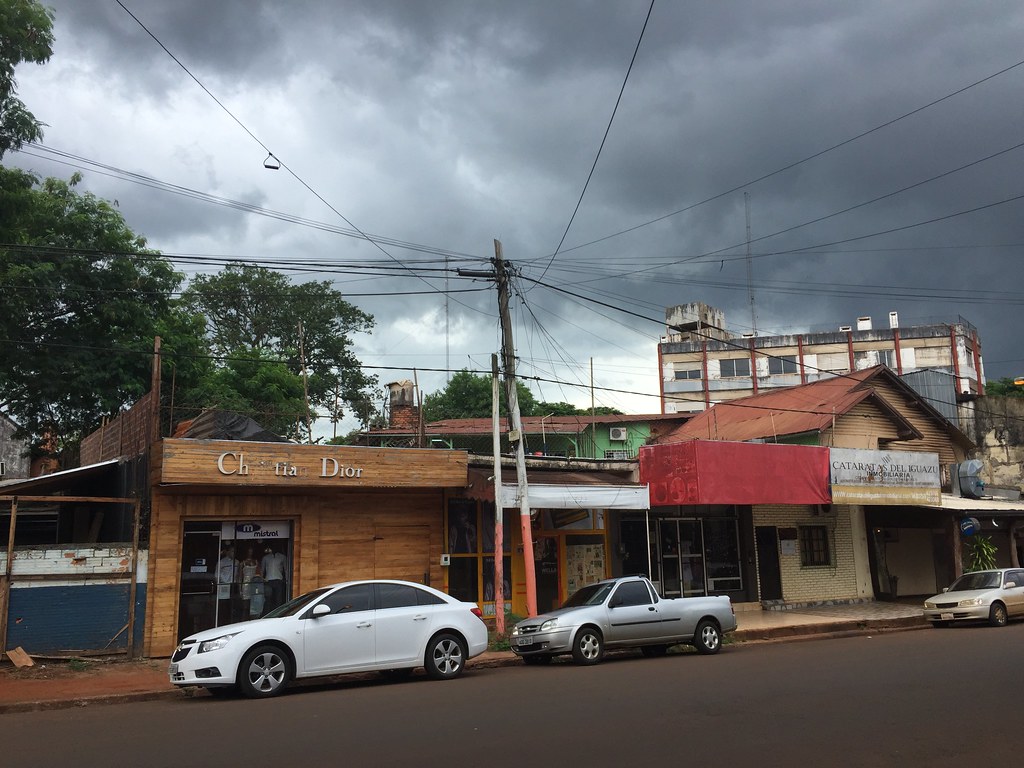 We wandered through the Mercado (really, the mercado was a series of shops all selling olives and sausages), tasted a few and purchased some for aperos. The olives were really quite good, had some interesting marinades, and were being stuffed by shop workers right on site.

From here we walked to the viewpoint where we could see both Paraguay and Brazil just across the river. 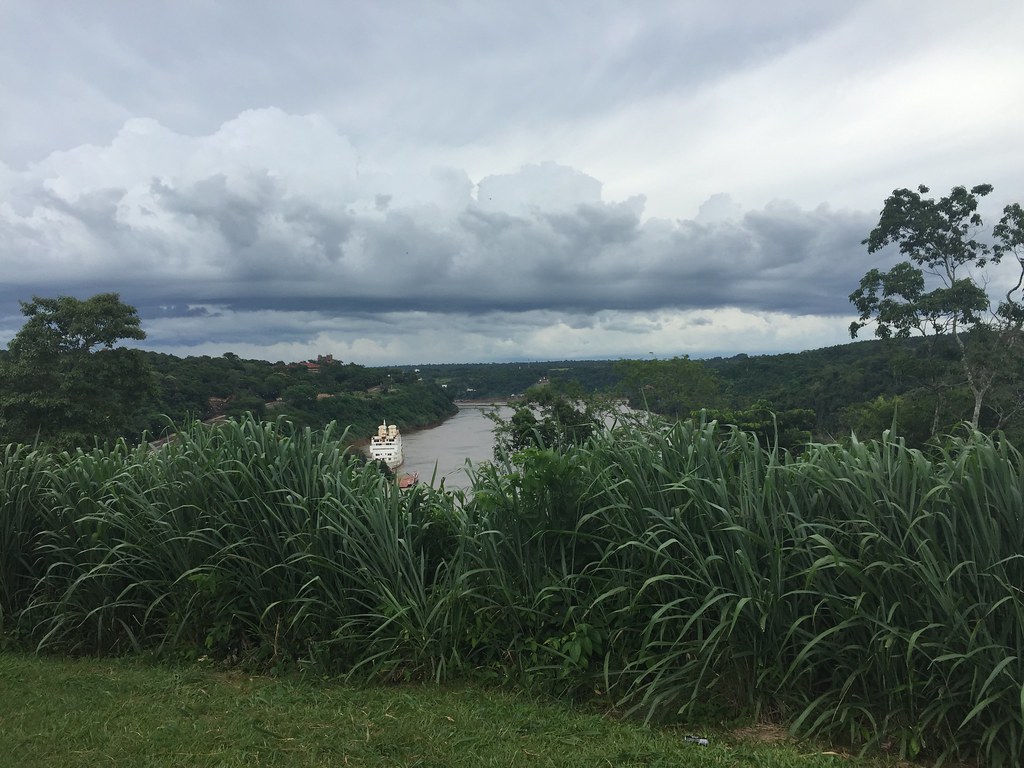 We loaded up on booze and more snacks at the grocery store nearest our hotel. The selections were sparse but as with our travels around the globe we always make due.

It was hot and muggy so we all had a refreshing swim, a nap, and then regrouped for cocktail hour. Our hotel was very adamant about not drinking your own booze but we know how to get around that as well. 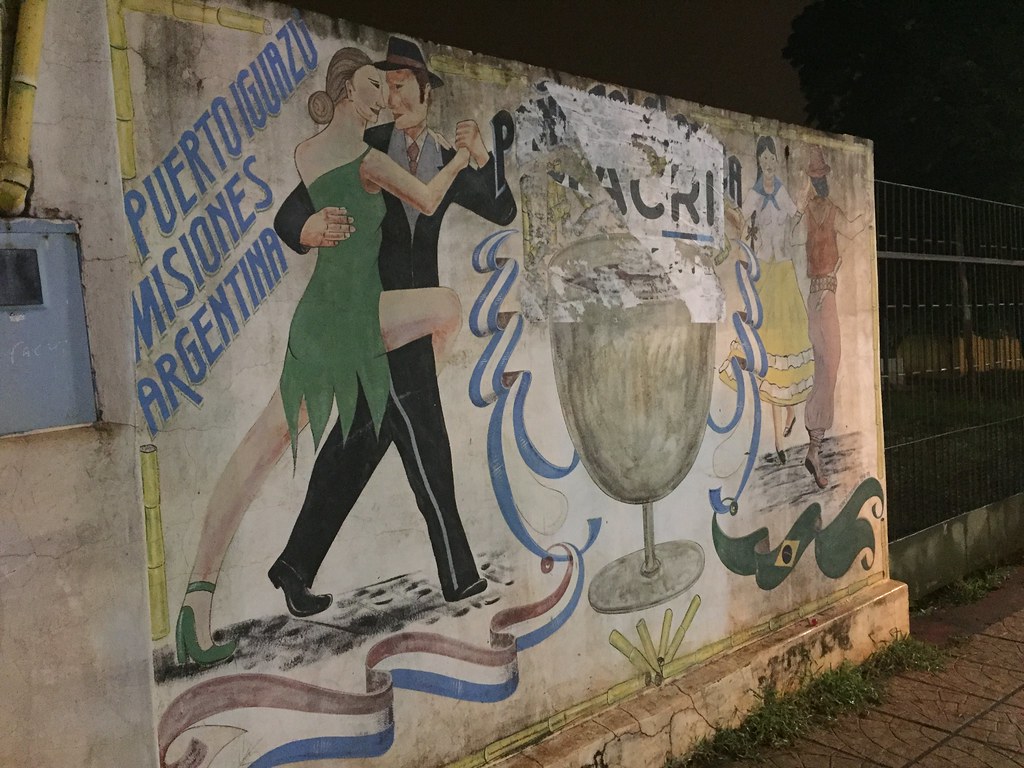 That evening we walked down dark streets with crumbling sidewalks to a nearby parrilla for dinner. The steak and sausages were grilled right in front of us on an outside grill and it was delicious. The wine which was recommended ended up being completely overpriced and we felt we had gotten a bit scammed on that. Oh well, we retired to our hotel for another round of nightcaps from our own stash. 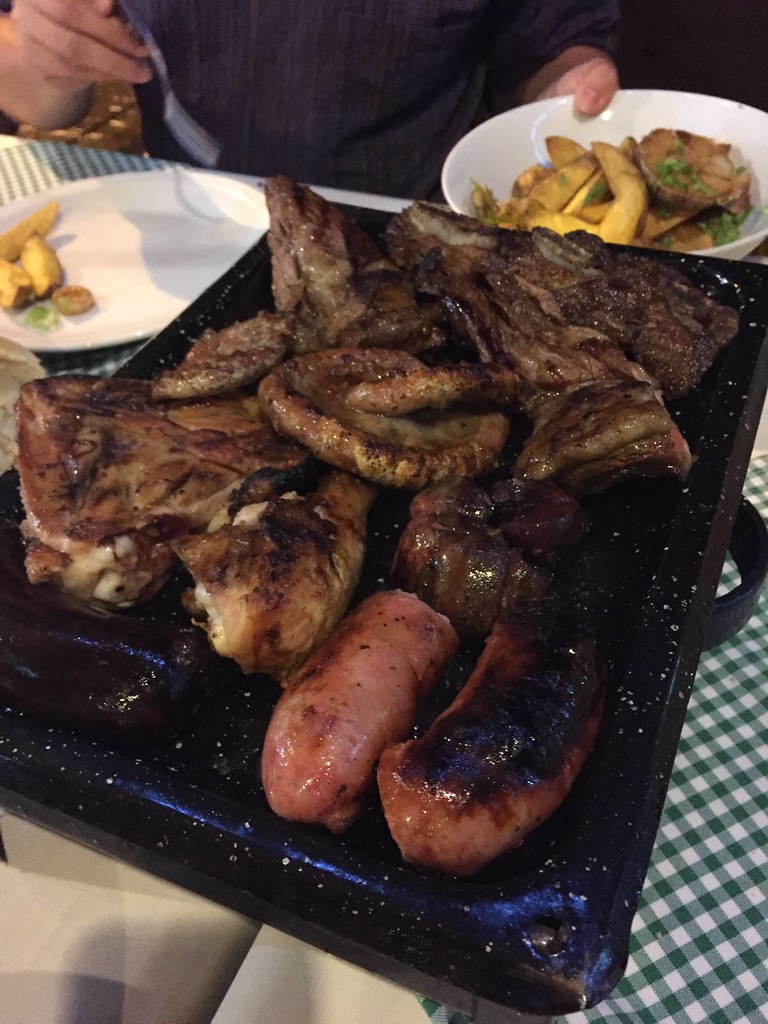 The next morning we hired a taxi to take us to the Brazil side of Iguazu Falls. We had a round trip negotiated price of 500 Argentinan Pesos along with an agreed upon time to pick us up. It took about 30 minutes to go through the border and then about another 30 minutes in a queue at the falls to get our tickets. We were all very excited to spend the day hiking around! We had been told that the Brazil side is best done first as it has the jaw-dropping panoramas, while the Argentina side gets you basically on top of the falls. After doing both, I'd totally agree with this. 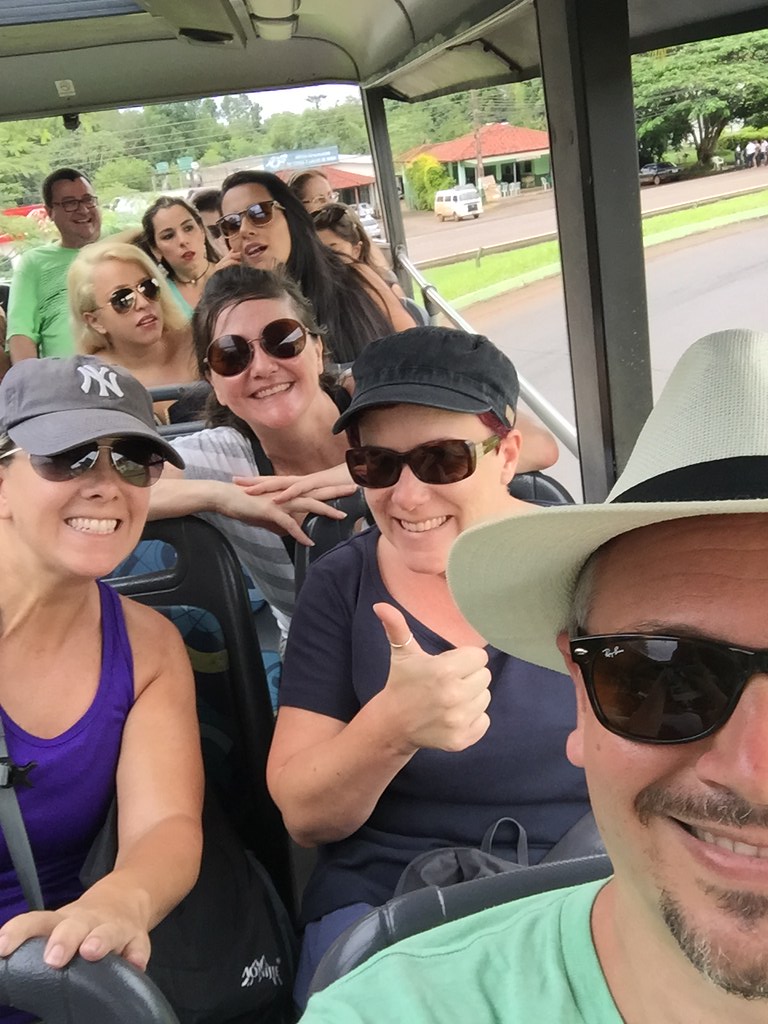 Everyone has to board the park bus which takes you to the trail head, and almost immediately we were face to face with the breathtaking views. But as we spent our day hiking the easy trails, the views got more and more spectacular. It was amazing and I've never seen anything like it or felt such a force of nature, even having been to Niagara. There are a whopping 275 falls! 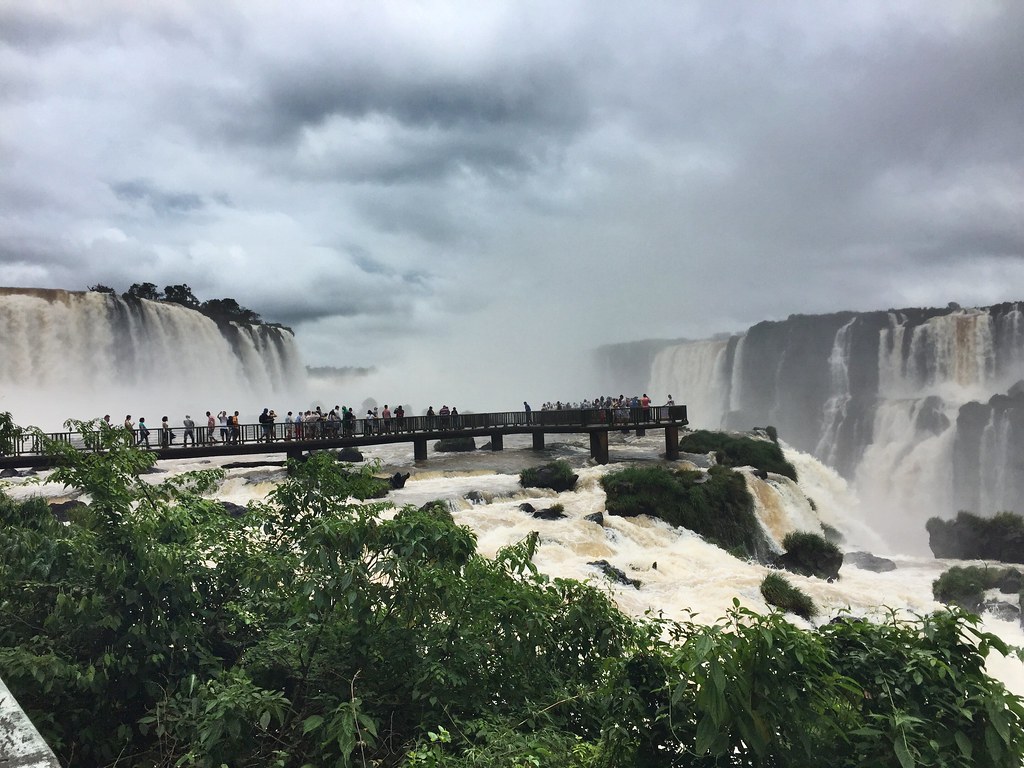 The park was over ridden with tourists and the raccoon-like coati, which although cute will bite you and try to take your food (I'm speaking of the coati). And as we made our way down closer and closer to the bottom of the falls there were pretty bright blue butterflies everywhere. It was magical. 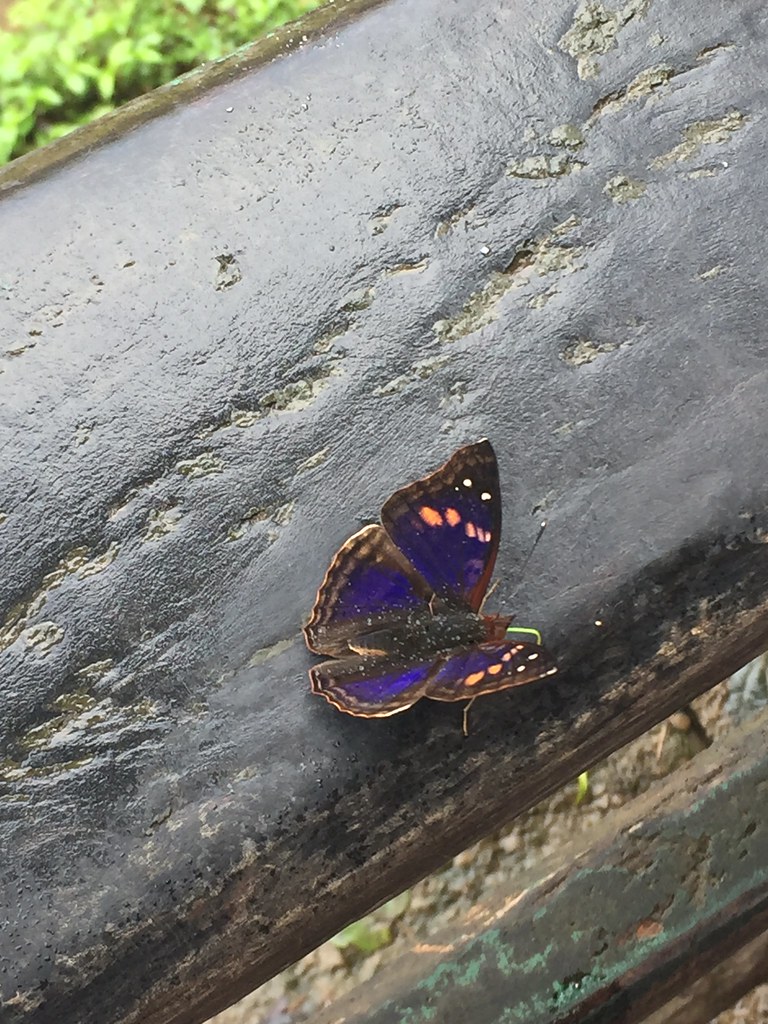 We finally made it to the bottom where you can walk all the way out, one of the falls crashing to the level of the walkway, and peering over the side where it continues down another drop. We were all completely soaked and giddy with the sheer power of the rushing water and being so close to it! These falls run brown because of the logging of the forests, a very visual lesson also. 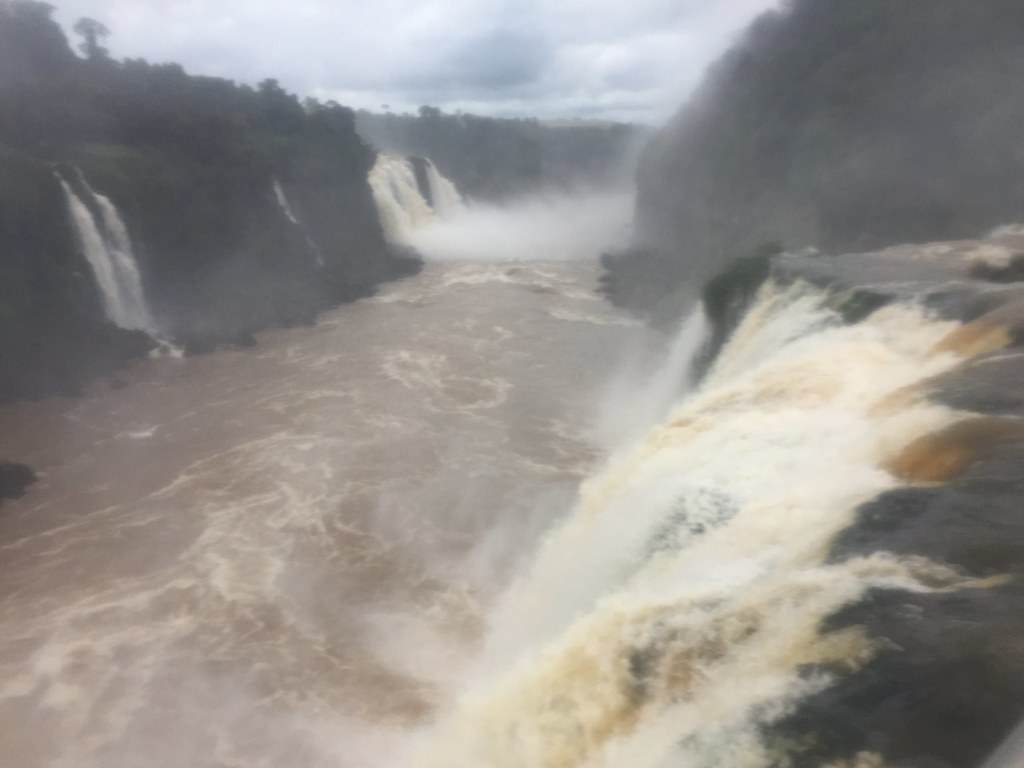 It was nice to return for a dip in the pool and take a nap after all the excitement of the day. That night we had a very lovely (if not slow) dinner at La Reuda which was the nicest of the restaurants we had seen in town.

After another bad breakfast the next morning, we called a taxi, this time to take us to the Argentinian side of Iguazu Falls. Our ride cost us about 200 Pesos each way. 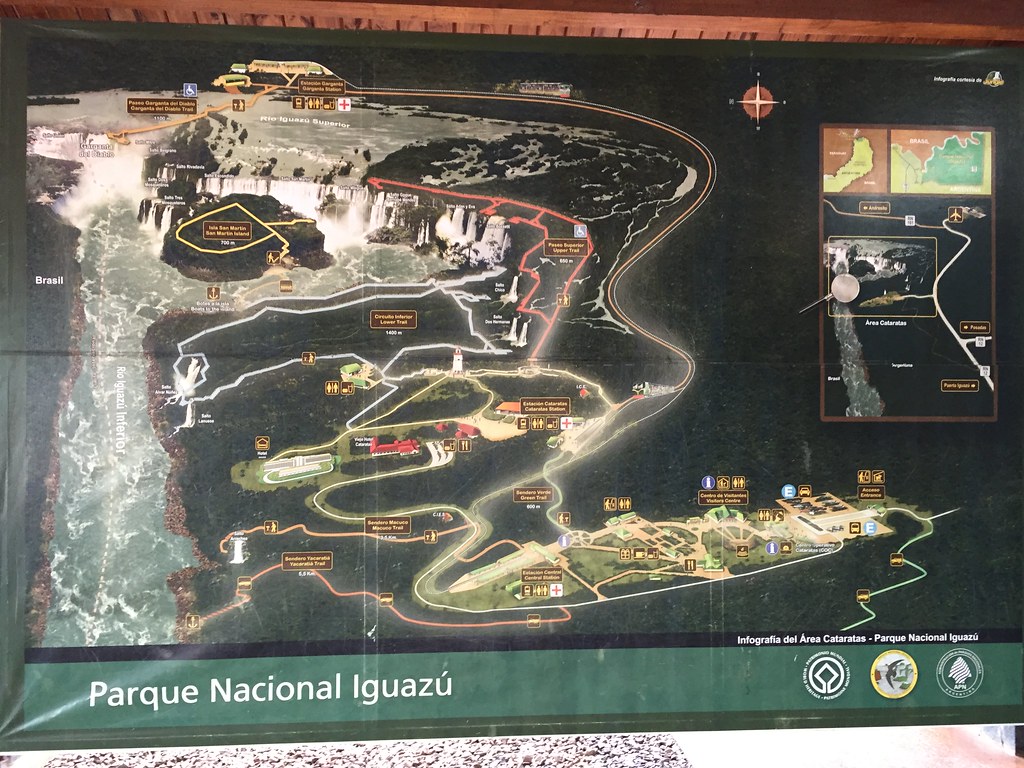 We spent over five hours and hiked over 10 miles here! The park is made up of three major trails with a small train that takes you to the furthest; Devil's Throat. Based on the queue we decided to hike to Devil's Throat and were glad we did, it was an easy flat hike along the train tracks and we had the opportunity to see hundreds of butterflies. 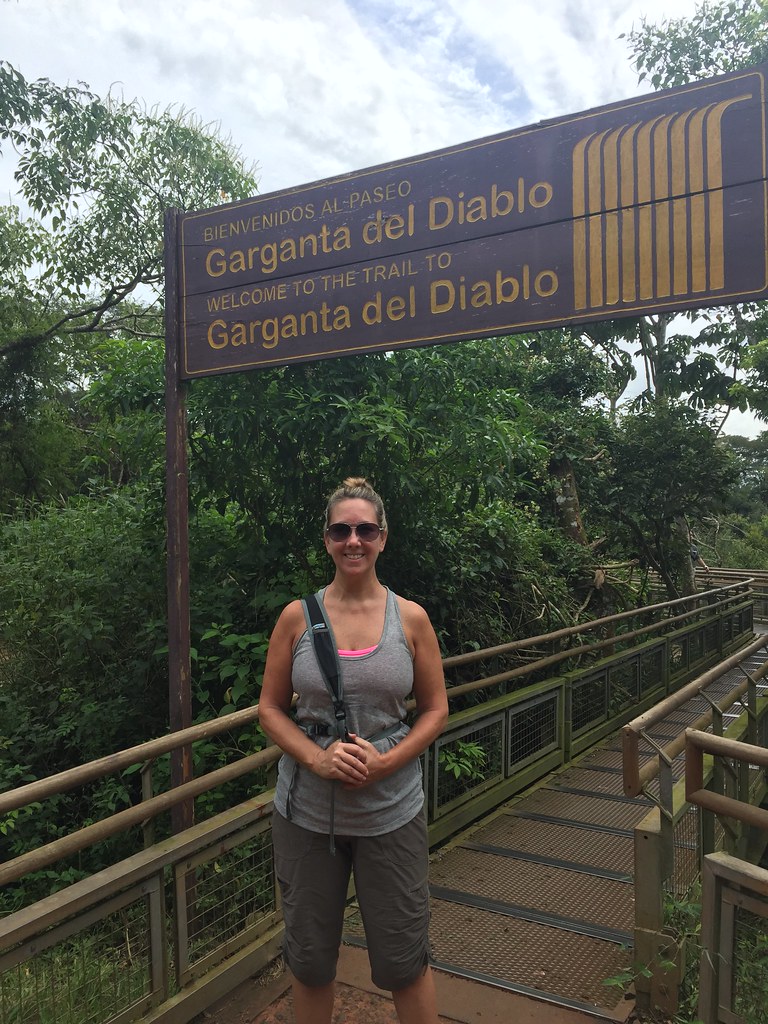 We could hear Devil's Throat before we could see it. We could also smell sweet mandarin oranges hanging in the trees. Butterflies were getting free rides on hikers, taking in the salt they needed to survive. This place has it all; sights and scents! 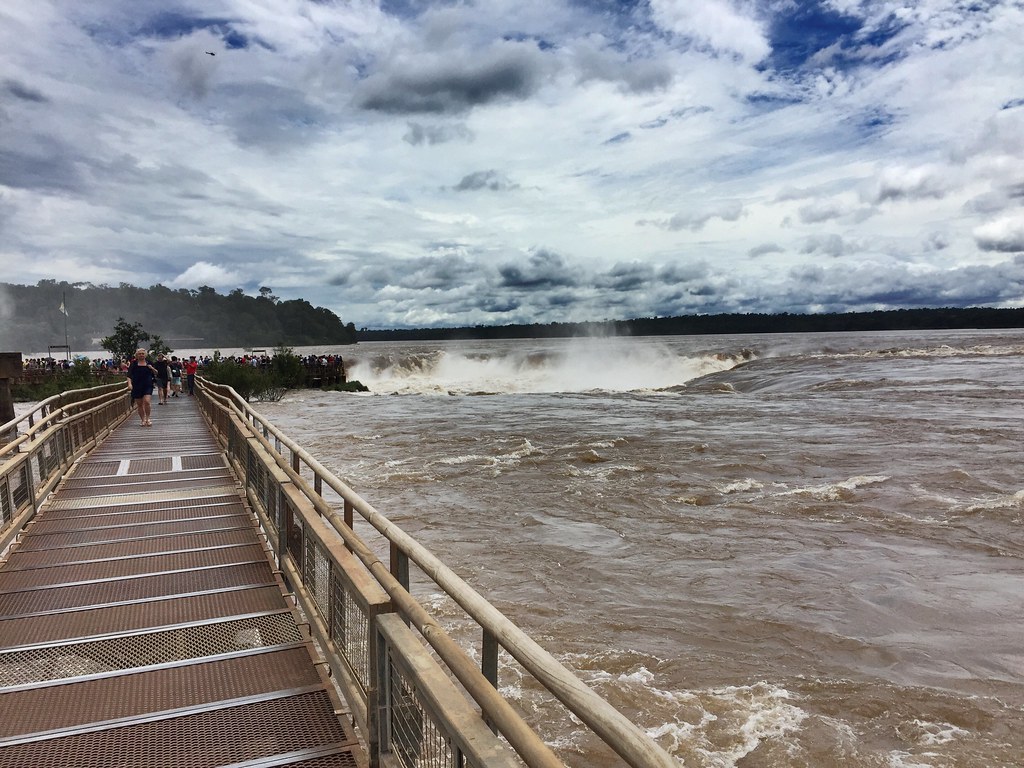 There is no way to describe the sheer power and awe that you come face to face with as you walk out on the walkway to the edge of Devil's Throat. Over half of the river's water flows over this 2,297 foot column-like fall. Spectacular to say the least. There's a video in the photo album, link at the end. 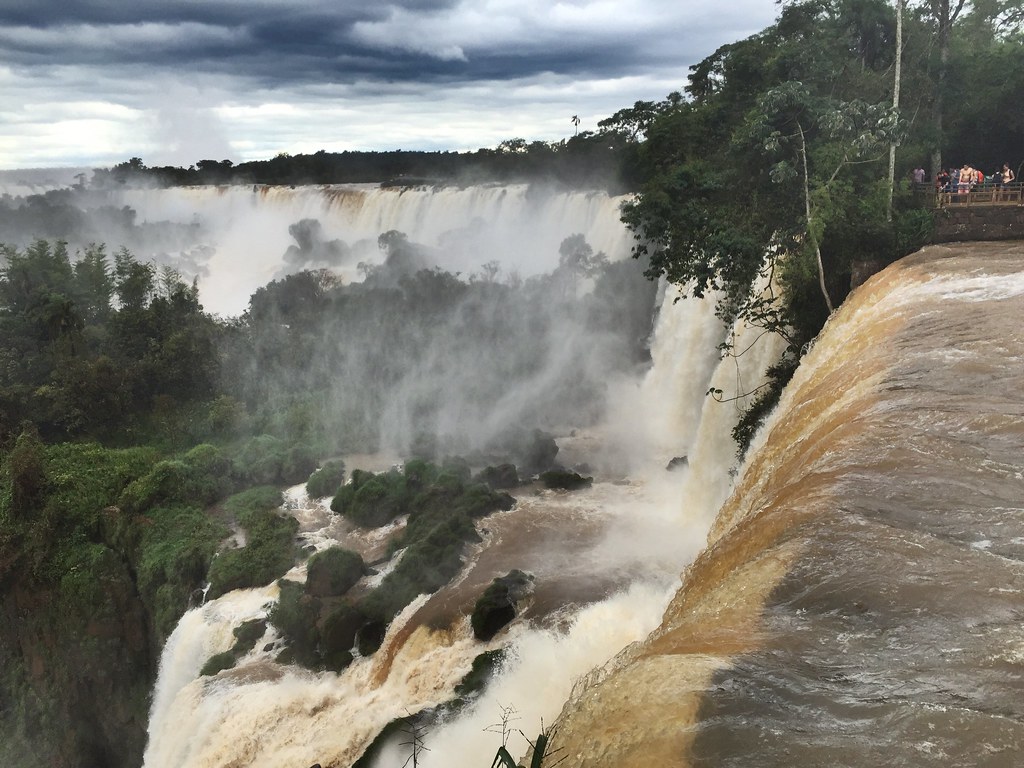 From here we rode the train back to the main hub, stopped for a casual lunch of empanadas and beers, and then hiked out to the Upper Falls trail. You cross right over the top of the falls, the roaring water flowing right under your feet as you cross the metal slatted bridges. 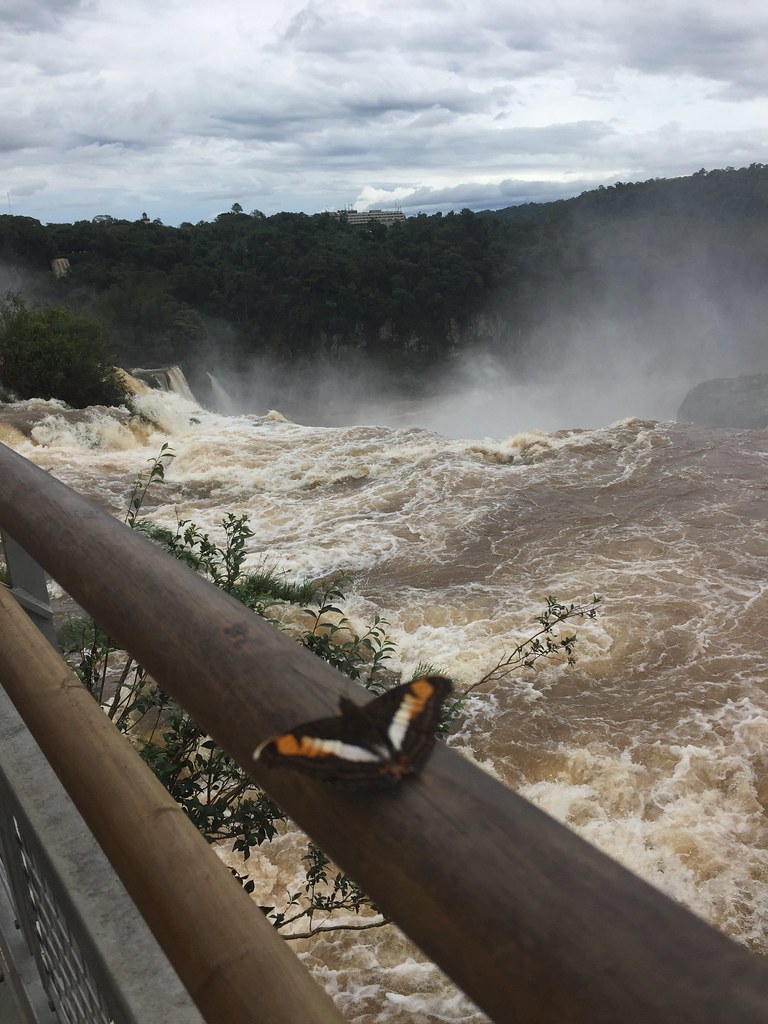 As we made our way to the Lower Falls trail we came upon a bunch of monkeys having entirely too much fun. Two were using the tents at the snack bar as trampolines even! 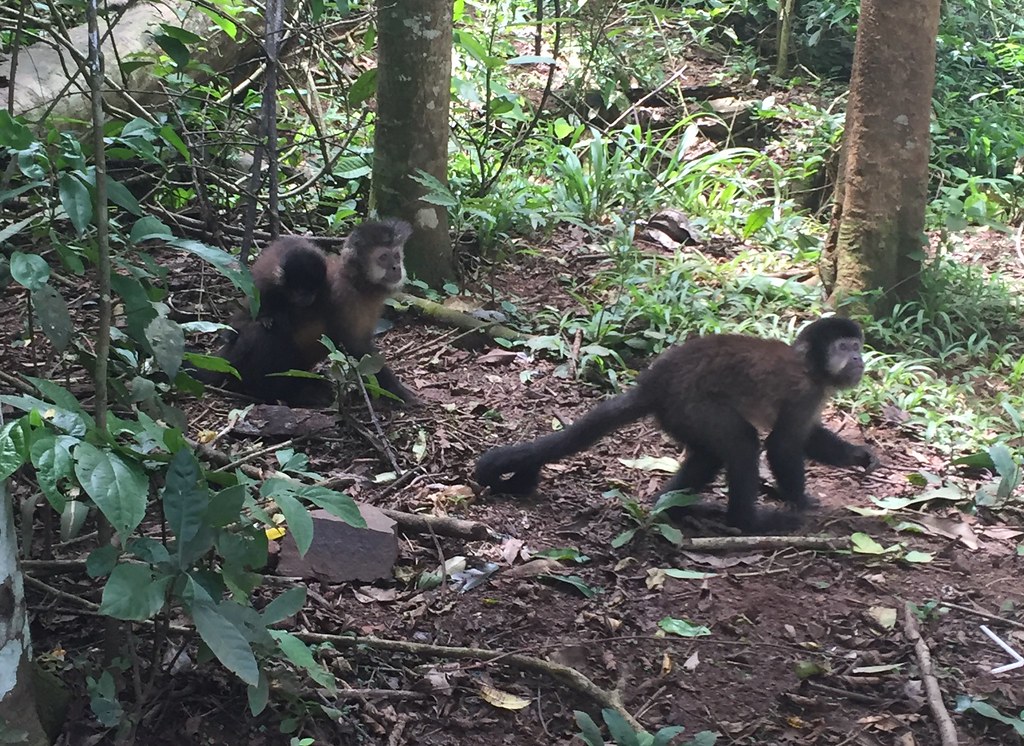 We had planned on taking one of the boats that get you up close and personal with the falls but because of earlier rains the water level was too high for the boats that just do a quick 1-hour tour. Since we didn't want to spend 4+ hours on the other option we skipped it in favor of the hikes but I'm sure it would be absolutely stunning to do. 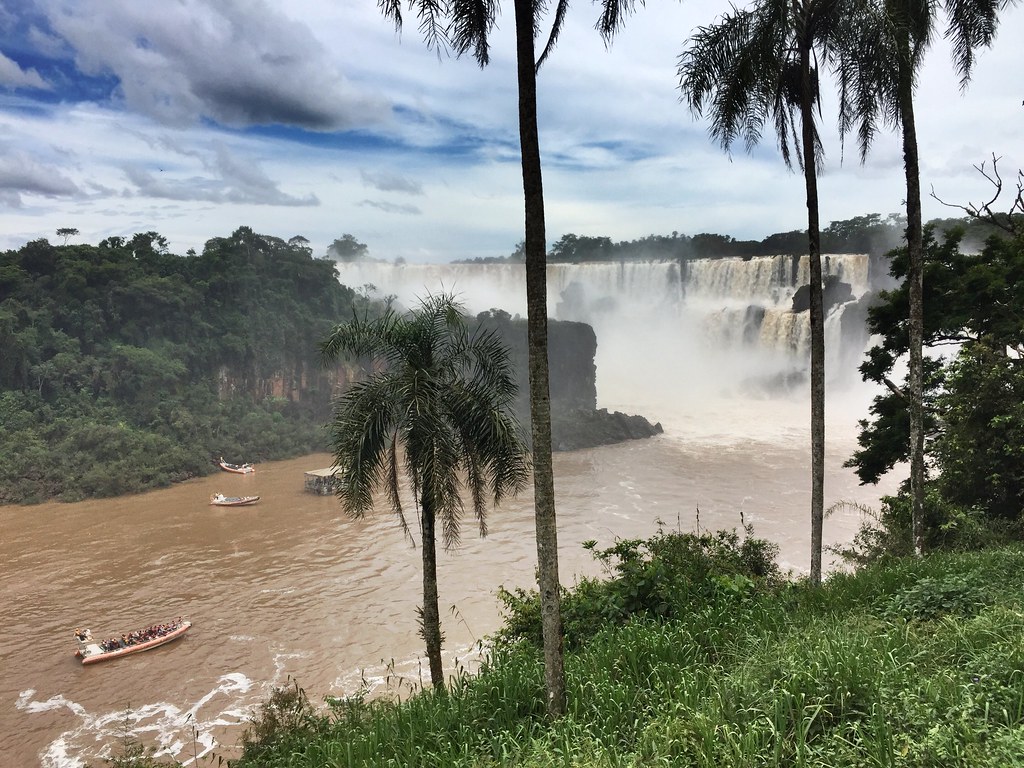 We could easily see across the river to the trails we had been on yesterday over in Brazil. It was amazing that the views of the falls never got old, I mean we saw A LOT of waterfalls! At the end of the day we were even rewarded with a beautiful rainbow as we headed across one of the last bridges! 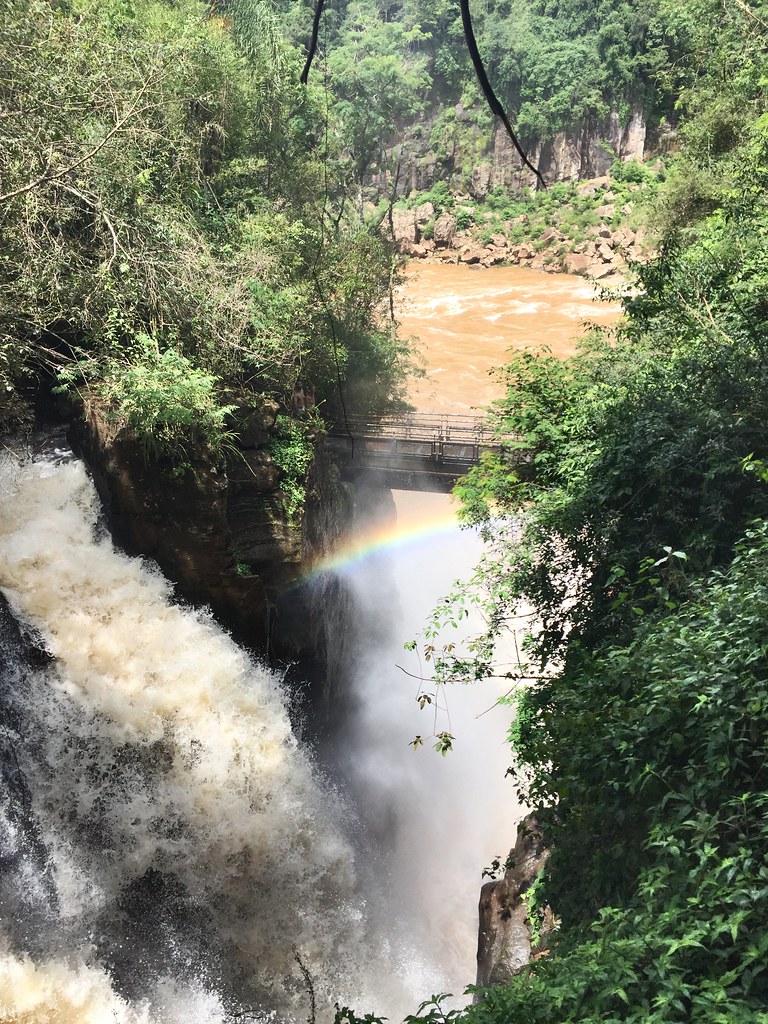 After all that hiking, it was great to cool off with a cold drink and a refreshing pool. 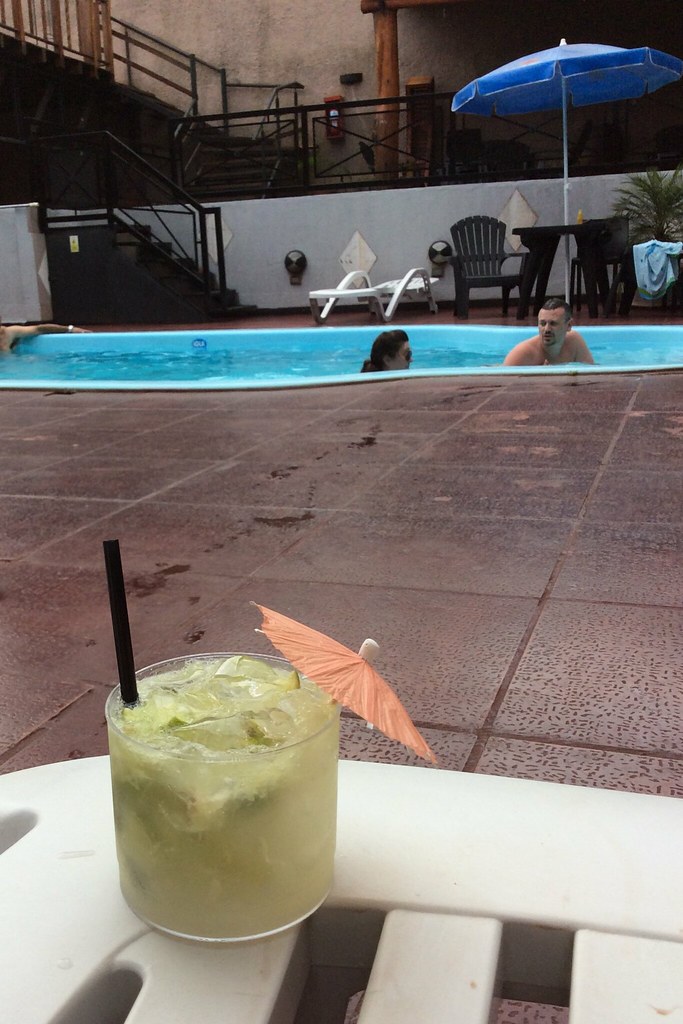 We had dinner that night at Bocamora, which has outside terrace seating and views of Brazil and Paraguay. It was dark by the time we got there, so the views were kindof lost on us. The twinkling lights in the distance, through the jungle were nice though!

The next day we checked out and hung around the pool before calling a taxi to the airport. This time there was no one at the border when we drove through, our ride was about 350 Pesos to the Brazil side. 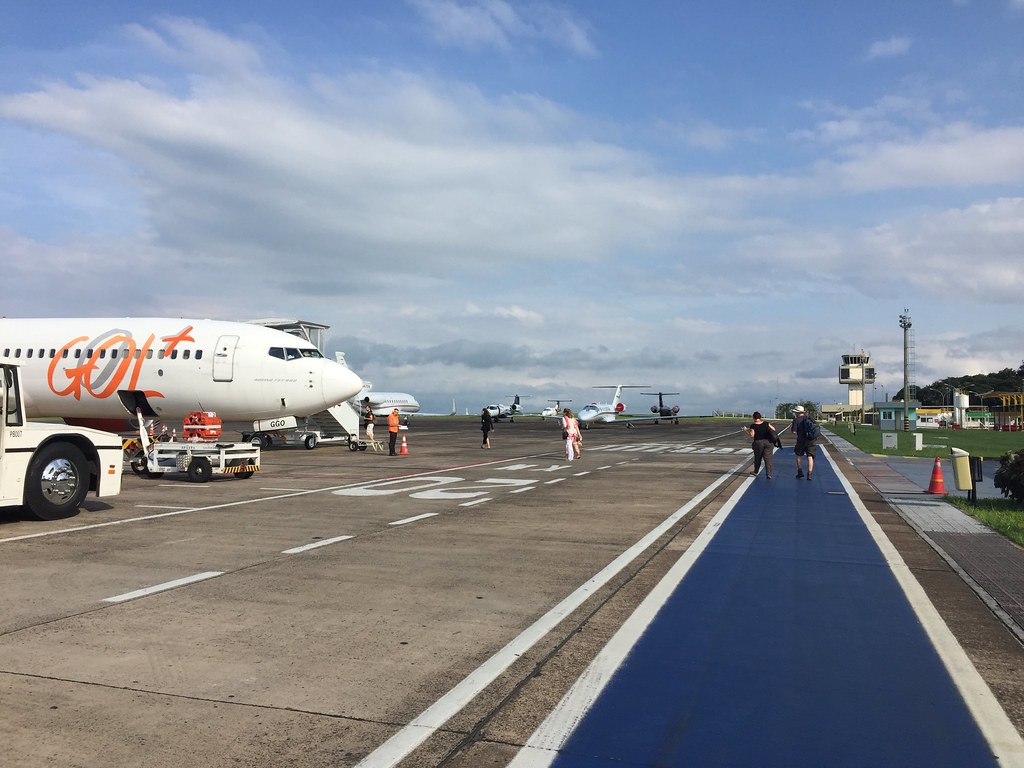 We had an easy 2-hour flight back to Rio where we were all excited to spend another seven days. And the next was New Years Eve!

All Iguazu photos here, warning... there are A LOT of waterfall pictures!
at August 13, 2016