Drink It In; Central Europe

Central Europe may not be first on everyone's list with regard to cocktails but I had some great drinks in some very comfortable settings when we visited in December of 2013.

Strangely Bratislava has quite a number of places to get a finely mixed drink, we only stopped in at one but arguably it is one of the best.  Budapest, while a much larger city, is known more for its Ruin Bars but I found lovely cocktails elsewhere.

Many places were closed for the holidays when we visited Vienna so we only got out to one proper cocktail bar. Bar Halbestadt is a bit out of the way but the drinks are good and the owners are incredibly friendly. It's a funny little space with tiny tables, glowing soft red light, and glass walls looking out to the busy thoroughfare. 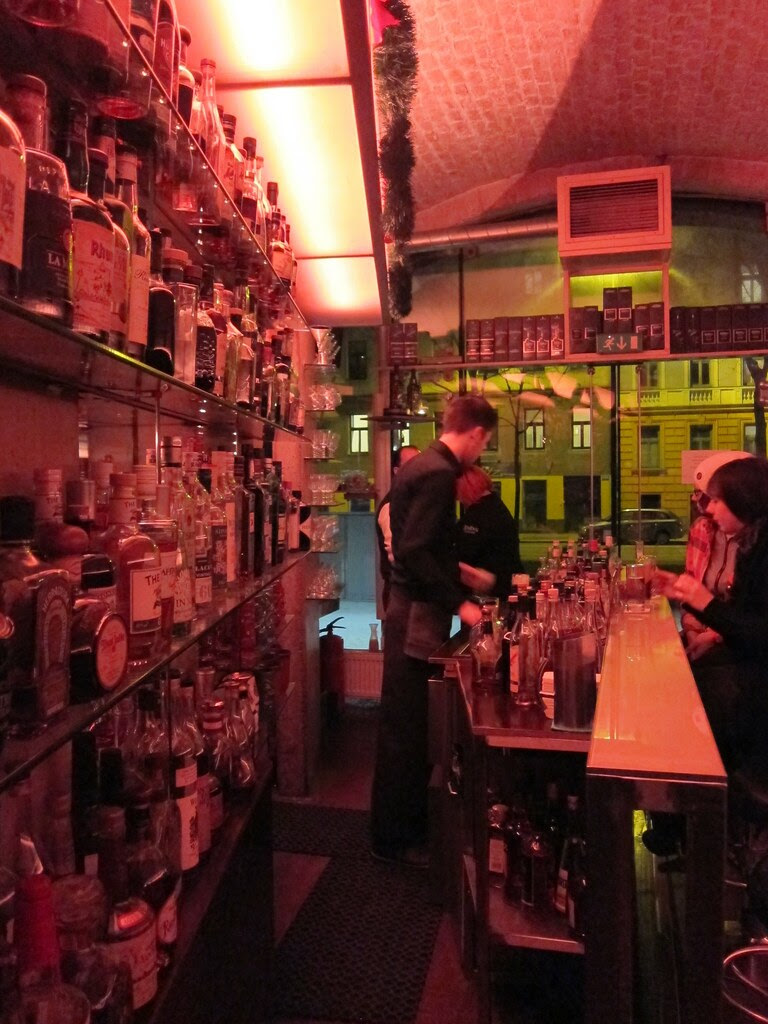 The owners also run a speakeasy which is just across the street. As there was a slight language barrier, I can't tell you its name or when it is open, I guess that is what a speakeasy is all about though now isn't it? 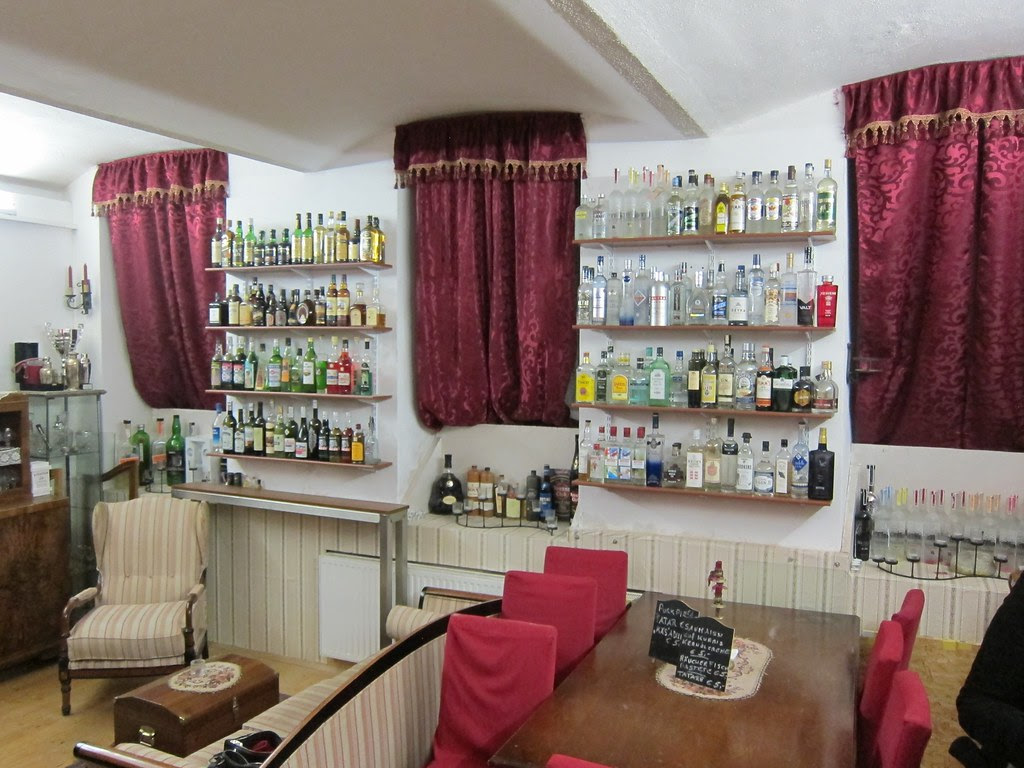 In Prague we had three great cocktail adventures. The first, Bar & Books, is an intimate lounge, dimly lit and just off the main square. We were happy to snag a small table with a window bench and stools. 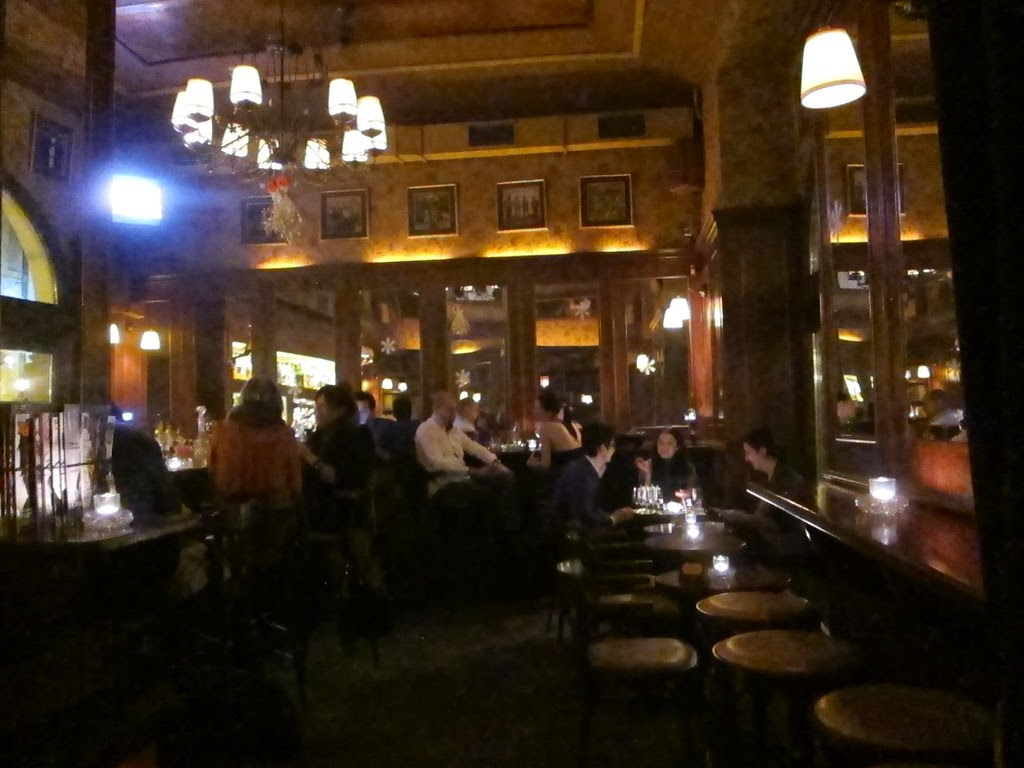 Bar & Books started in New York and has a few locations around the world. The cocktails were quite good, I especially enjoyed my DYI Side Car, but the bar is known as a cigar bar so those affected by smoke be forwarned. 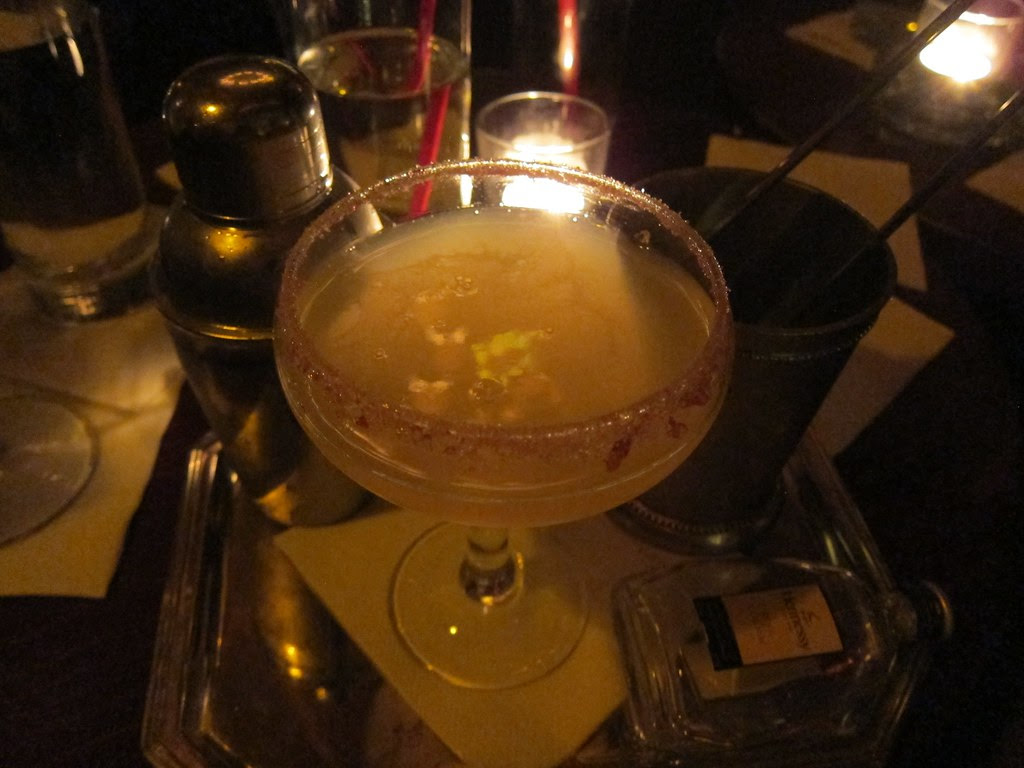 Just off to the side of Old Town Square is Black Angel's, an extremely cool place that unfortunately does not allow photos. After descending to the basement, we were seated in a small alcove space, lit mainly by the glow of the huge tropical fish tank along the wall. The drink menu was extensive and we all happily had a couple of rounds. The presentation on my Manhattan was especially creative, with the drink being kept cold in an antique mini milk bottle, chilled in a little ice bin with the glass and garnishes on a silver platter, ready for me to help myself.
Prague's Hemingway Bar was another great find. We sat upstairs where there were big booths, perfect for our group of 6, but the 2-story lounge has bars on both levels. Obviously rum is the spirit of choice here but even gin based drinks got high marks. 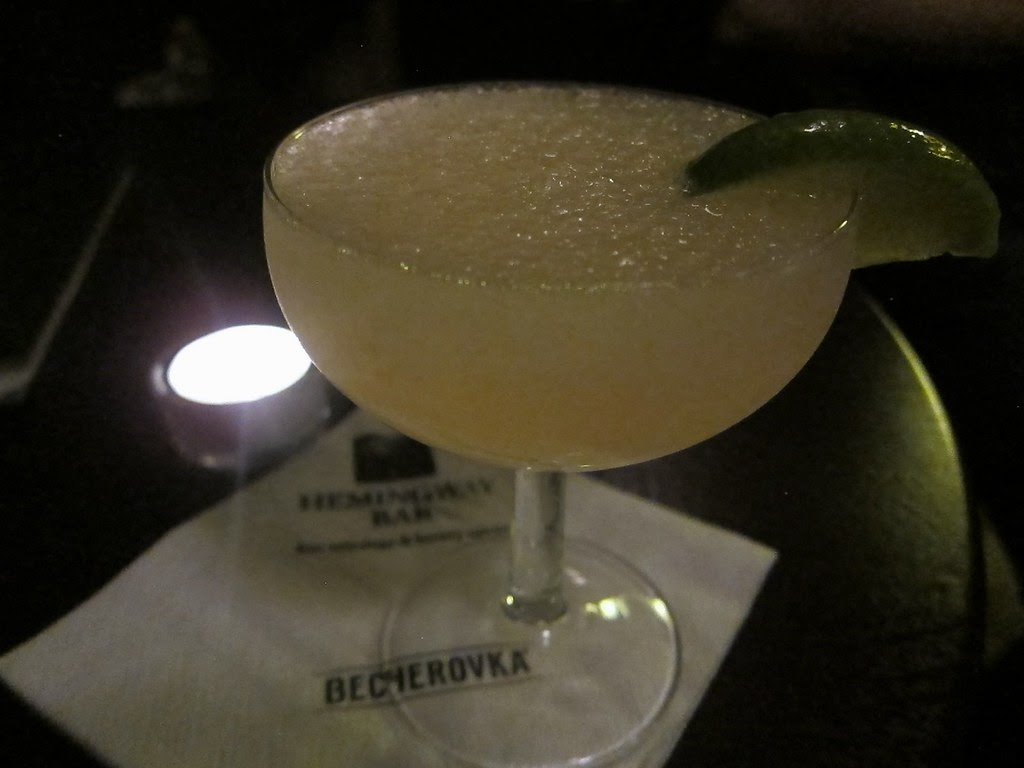 We also stopped in at the Absintherie, part bar part Absinthe museum. Although they offered many cocktails (absinthe mule anyone?) made with the green fairy, we chose two very high end products off their list of over 50 and simply had them louched. 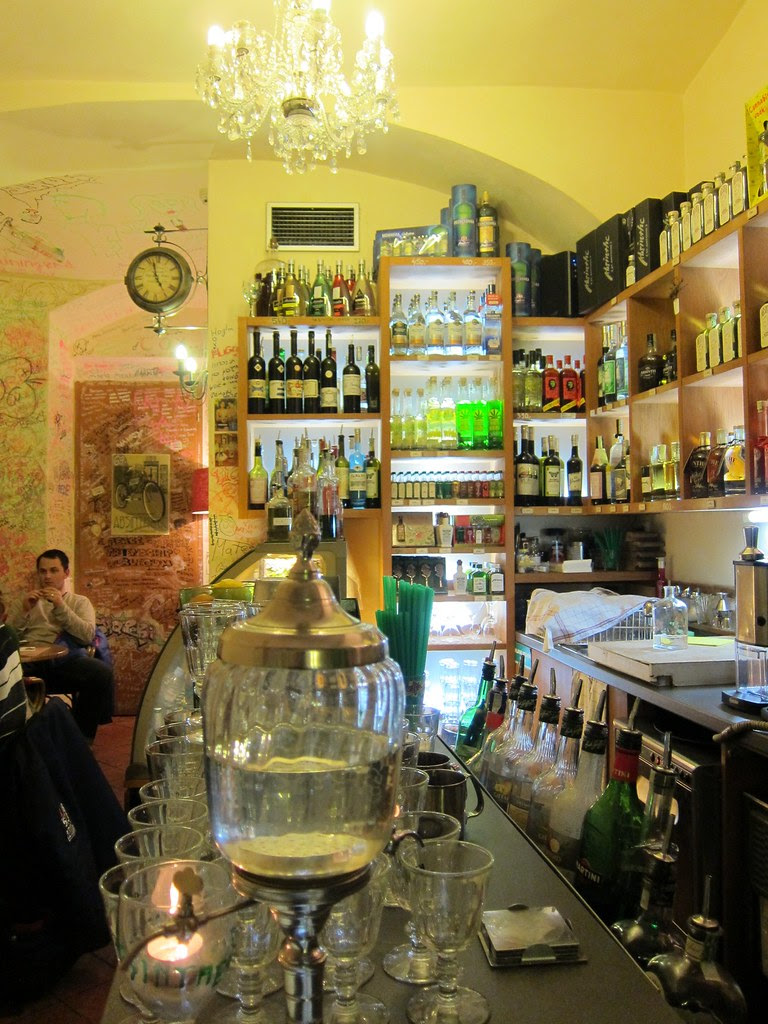 The bar is full of old advertisements, paraphernalia, and of course shelves of product, some very very good and some just gross - absinthe with a scorpion in the bottle!

More than cocktails, Central Europeans love their beer and you'll find beer houses all over the cities. In Vienna we had a few rounds, paired with some snacks, in the
old town at Gösser Bierklinik. The pub felt subterranean and medieval, lots of folks toasting with the house ales and enjoying rollicking conversations. It was also pretty smoky in a few designated areas since smoking is still allowed in this part of Europe. 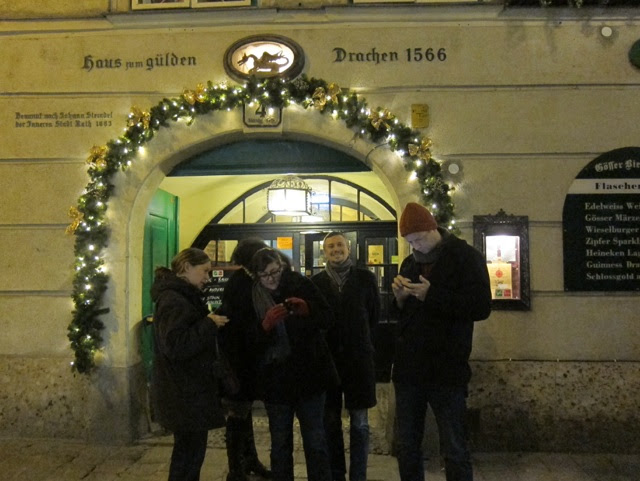 Prague is no stranger to beer halls of course, and we went to one of the best known ones for dinner one evening. Golden Tiger has been around forever and attracts locals and tourists alike. 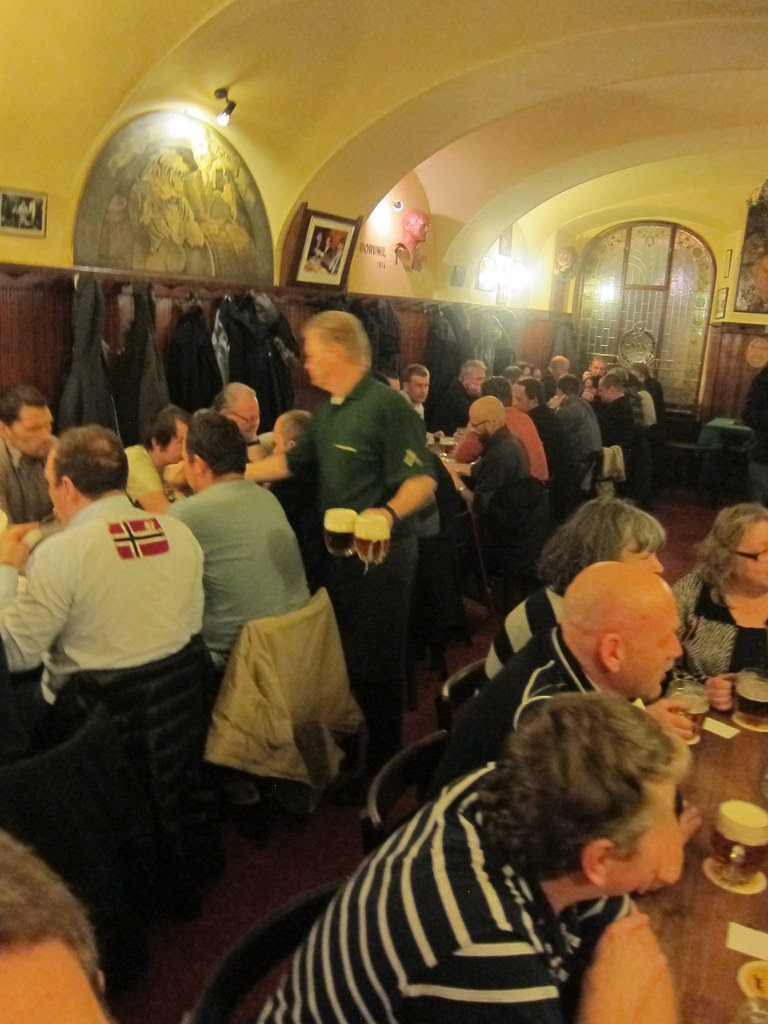 We crowded into a shared picnic style table and immediately beers appeared in front of us. We learned quickly that if you didn't cover your glass with a coaster beer would be delivered each time you got near the bottom of your current pint. There were no menus, the beer served was Tiger, and the waiter just kept adding tally marks to our check similar to how they do it at a dim sum restaurant. 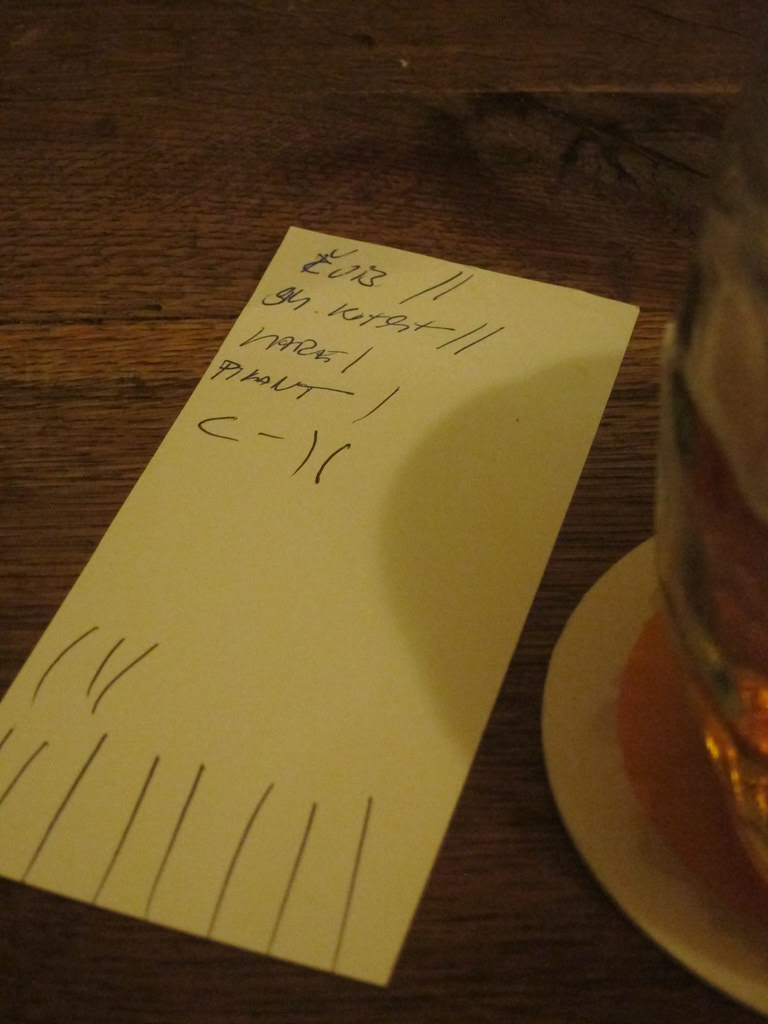 Dinner was basic pub fare, hearty enough to help soak up all that beer. The only people not having a great time were the tourists who showed up 5 minutes after the kitchen had closed.