Up Up in the Cloud(forest)

Our first trip to Costa Rica, I've wanted to come here for years now! We flew Seattle to Miami on a red eye & then Miami to San Jose on American. when we arrived in San Jose we had arranged a car service to take us to our first destination - Monteverde. We'd been told it was a 3 hour drive on a dusty twisty road so we figured we'd hire a car & relax. We used Anywhere Costa Rica to book almost all our transfers and tours and couldn't have been happier with their service.

Our driver stopped so we could grab beers and bags of chicharrones for the car trip. We were heading towards the high altitude cloud forest but started our drive right next to the sea. The country is so small you can practically see side to side and tip to tip. The roads varied from 2 lane highways to 1 lane steep dirt roads, we were happy to let someone else do the driving!

Driving higher and higher up into the mountains we spotted an Emerald Toucan, our first wildlife spotting! here the roads were also a bit hairy, full of potholes and lined with steep drops.

We arrived in Santa Elena, the tiny subset town of Monteverde, and we're immediately in love with our lodgings, the Hotel Acor Iris. We had a cute cabin with a porch, living room and two bedrooms each with their own bathroom. The grounds were gorgeous and the whole thing was tucked off the main roads.

Not that that would matter much as we found, walking into the tiny town, it was literally only a 3 block circle. We checked out the grocery store, made a mental note of some bars to check out later and concluded the walk back to our front porch where we enjoyed a few martinis and the amazing weather.

Since we were only going to be in this area for 1 night I had booked us a night hike in Hidden Valley (also thru ACR). We were picked up just before sunset & by the time we got to the ridge of the valley the sky was crazy beautiful.

We set out in small groups each led by a guide and outfitted with flashlights. Almost immediately we came across some Agouti. Continuing on in the dark jungle (which was a bit unnerving) we came across a huge spider web which was home to the crab spider. Our guide demonstrated the strength of this massive web and also told us that by morning the spider will have taken the whole thing down.

Next we came across coati which are raccoons with long snouts that they poke in the ground and in trees and bushes looking for bugs and such. They run in small pacts and we'd come across this group again before the night was over. Our guide also spotted different birds sleeping in the trees- toucans, parrots and the such. The wind was quite strong and it was funny to see them all tucked in and swaying precariously on the branches.

At a small rise of earth our guide asked us to step extremely quietly and as we crouched around the opening he tempted its house mate out for us to see... A tarantula! 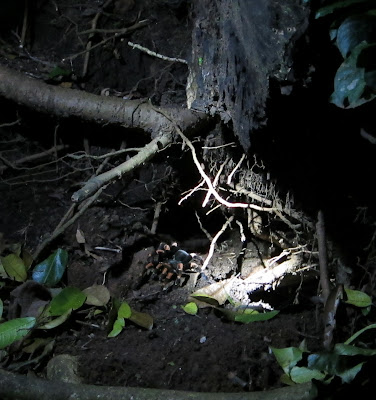 Ok then! They are blind which is why they are so tuned in to the vibrations of the ground. It was big and a bit unreal which was good as I didn't run screaming!

Also on the creepy meter was a fruit bat we passed under, hanging upside down from a tree branch sucking on a guava. Cute (not)! We crossed paths with the coati again and then we were back on the ridge. A successful first hike in Costa Rica I'd say!

That night we had dinner at Morpho's, named after the amazing blue butterflies of the country. The food was good (CR isn't really a foodie destination) and well priced. Kate, Dayne & I headed out after for some Guaro sours, the national drink, at The Treehouse.

In the morning we headed to breakfast (included) at the hotel & got quite a show from the White Faced Monkeys who were also at breakfast!

Then we were picked up and driven higher into the mountains to the Sky Trek Park where we started the day with a hike in the cloud forest. The park has a series of 5 hanging bridges suspended just above the forest floor, at mid level and high above the canopy. The longest is 984 feet across. It was very cool and a bit scary for this acrophobic!

The morning was quite cool and when our guide spotted (smelled their fresh poo actually) a few howler monkeys high up in the treetops they were very still and huddled together. Exciting for us non the less!

This was my first time in a actual jungle and I was in awe of the variety of trees and plants; the size of the leaves and fronds; the sounds of exotic birds and animals. We spotted quite a few beautiful birds (no quetzals for those of you in the know) and even the world's smallest orchid.

We finished our 2 hour hike and Dayne, Forest & Kate got suited up for some zip lining. I'd already checked this off my bucket list in Puerto Vallarta and once was enough for me. We all took the Sky Tram up the mountain together, I just didn't have on as much gear.

The views on the way up were amazing, you get to a point where you are straddling the continental divide and the winds from either coast are battling each other. As Team Zip Line made their way down via dizzyingly heights and breakneck speeds on 10 zip lines, I rode back down in the tram and went on a little hike through the hummingbird garden.

And so ended our 24 hours with our head in the clouds...