Happy new year! We're on our way home after about 2 weeks in Costa Rica with our friends Forest and Kate which was fabulous. Warm sun, sand, jungles, animals, birds, surfers & hikers. It was a completely relaxing vacation and more physically active than most we take. We drove ourselves to our New Years Eve destination of Tamarindo from the volcano area of Arenal (more on that in an upcoming post). It was a winding & sometimes tense drive but the scenery was stunning. 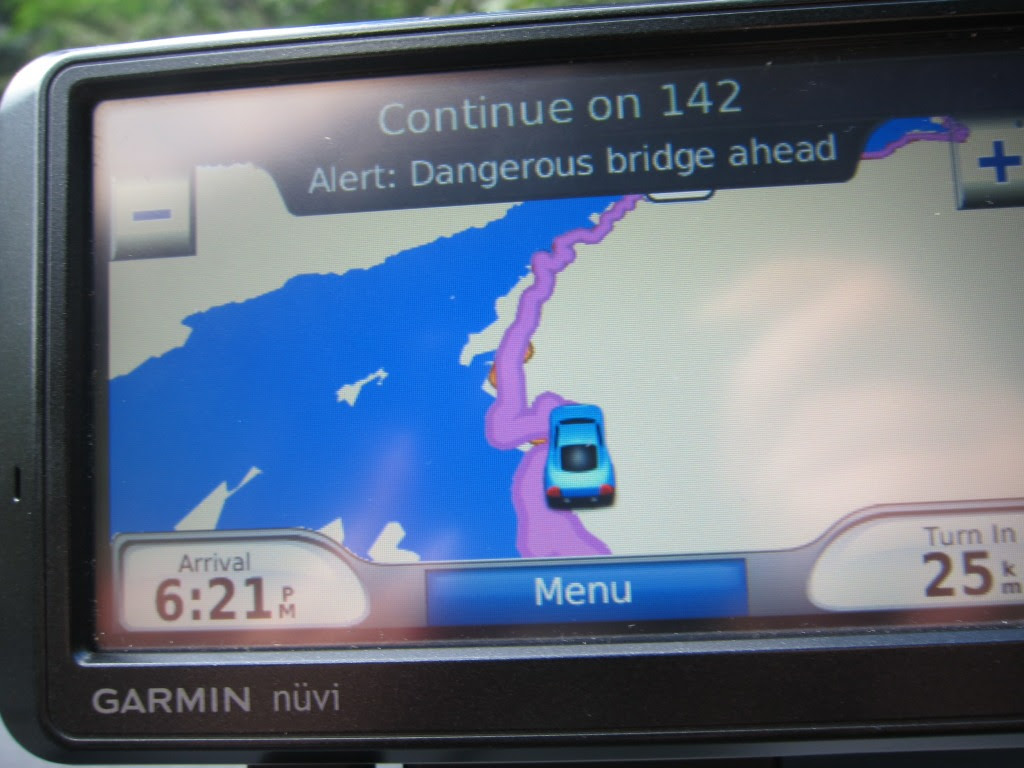 Beautiful Tamarindo is a tiny surfer/party town on the Pacific Coast. We rented a condo called Gran Mirador from Vacation Rentals of Tamarindo. The property was great, a huge 2 bedroom, 3 bathroom condo on the 4th floor of a relatively new building slightly up a small hill from the craziness of the beach front. The building had a pool, gated underground parking garage and an elevator that opened up right into the condo. One entire side was balcony looking out on the ocean. 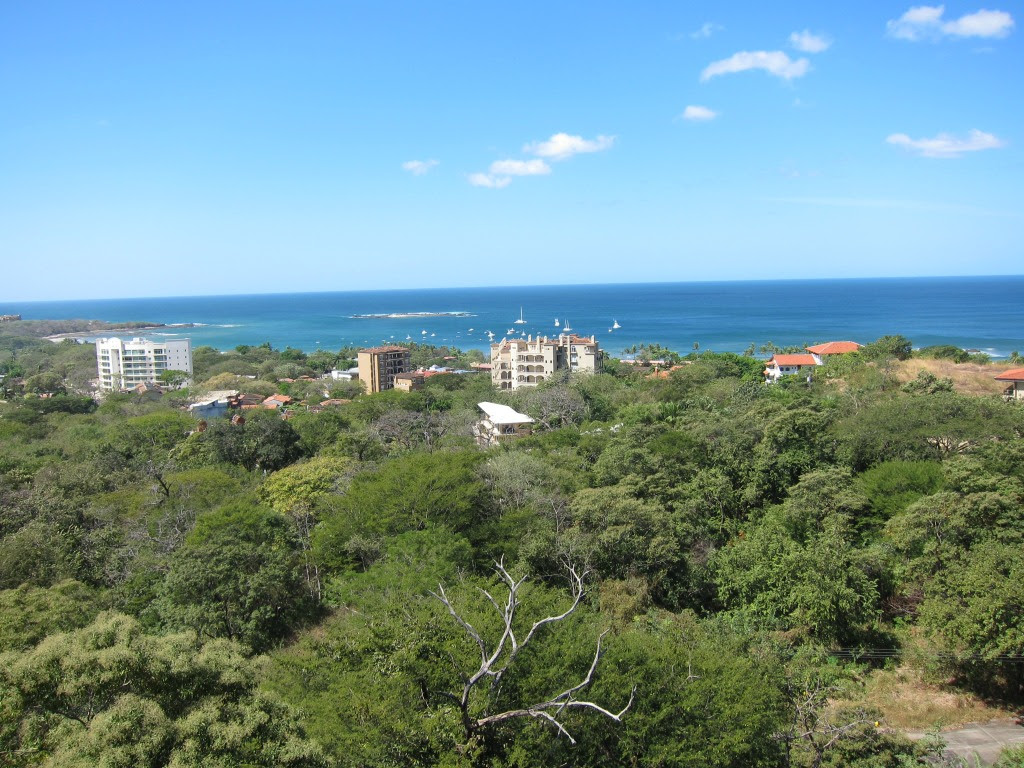 We spent the majority of our time on the patio, including the afternoon of NYE when shortly after noon as we were finishing our brunch of Cuban sandwiches and tacos from a few stands in town, Kate went to open the slider (kept closed as we had the ac on inside) and found it locked. The security bar had fallen into the track inside and it was doing its job perfectly. 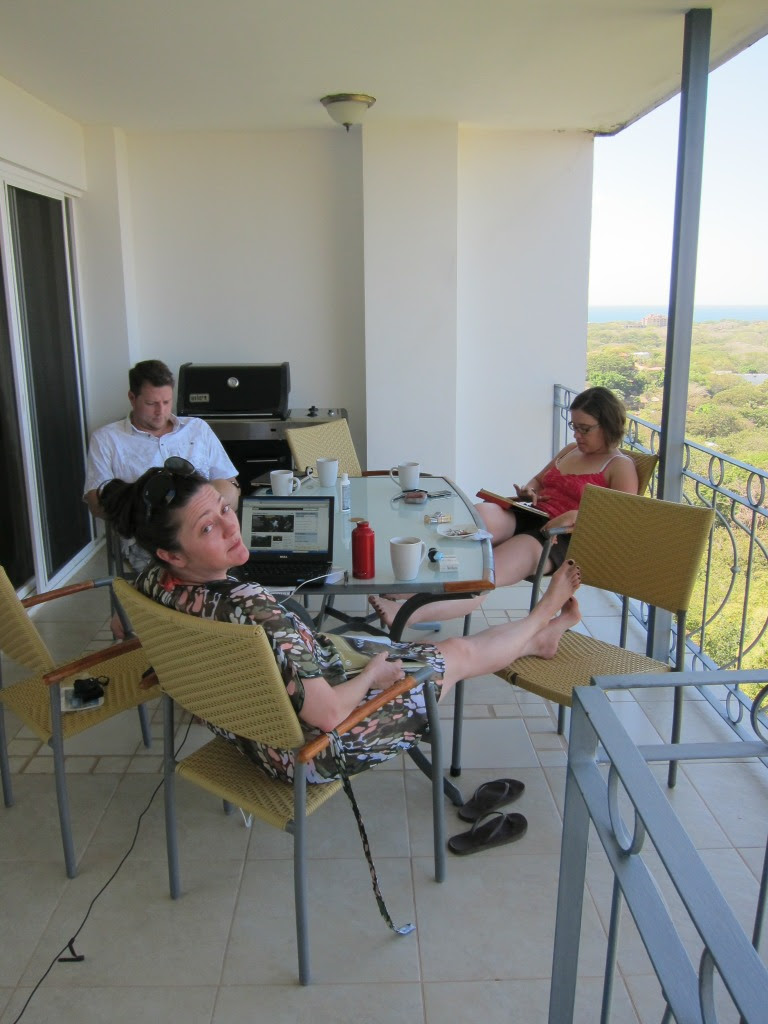 After checking the slider to our bedroom and also finding it locked we realized we were trapped on our luxurious balcony! 1st world problems. Luckily Dayne's phone was outside (the only one as the rest of us just had our laptops and iPads) & he called Jonathan our property manager to come rescue us. We were dying laughing and Jonathan told us later he thought for sure we were playing a joke on him! Oh we'd do well at Survivor for sure ;) 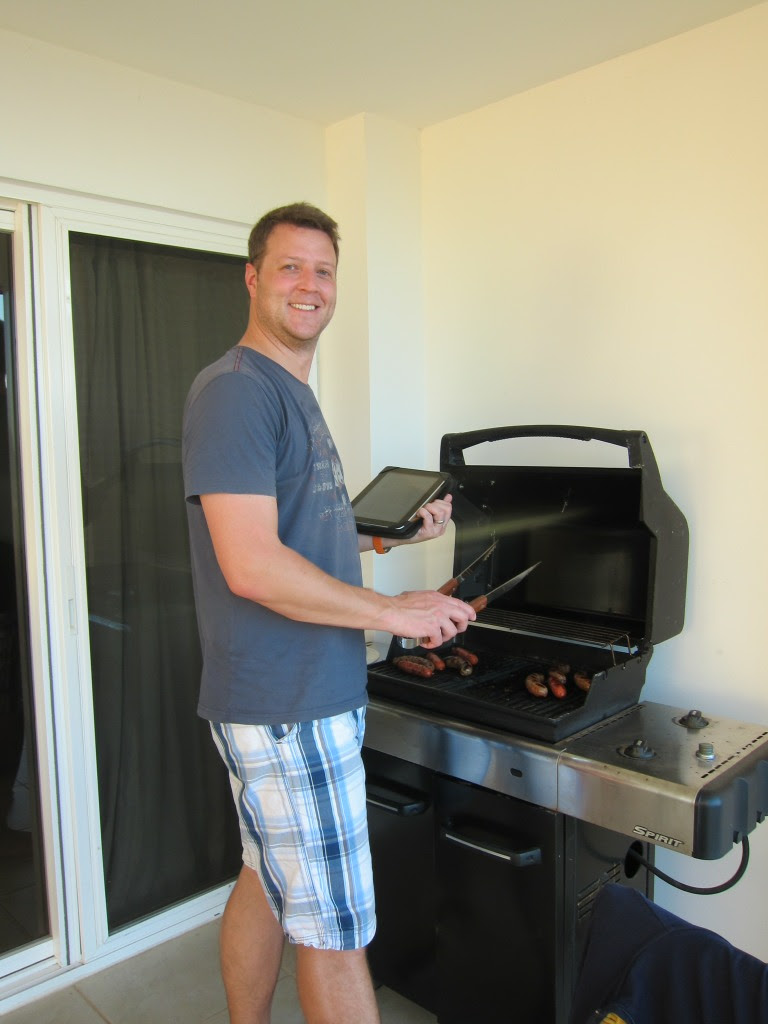 During the afternoon beers switched to white wine which switched to delicious rum daiquiris made by Dayne. We grilled sausages, Forest made a lovely salad and black beans and we ate watching the sunset. 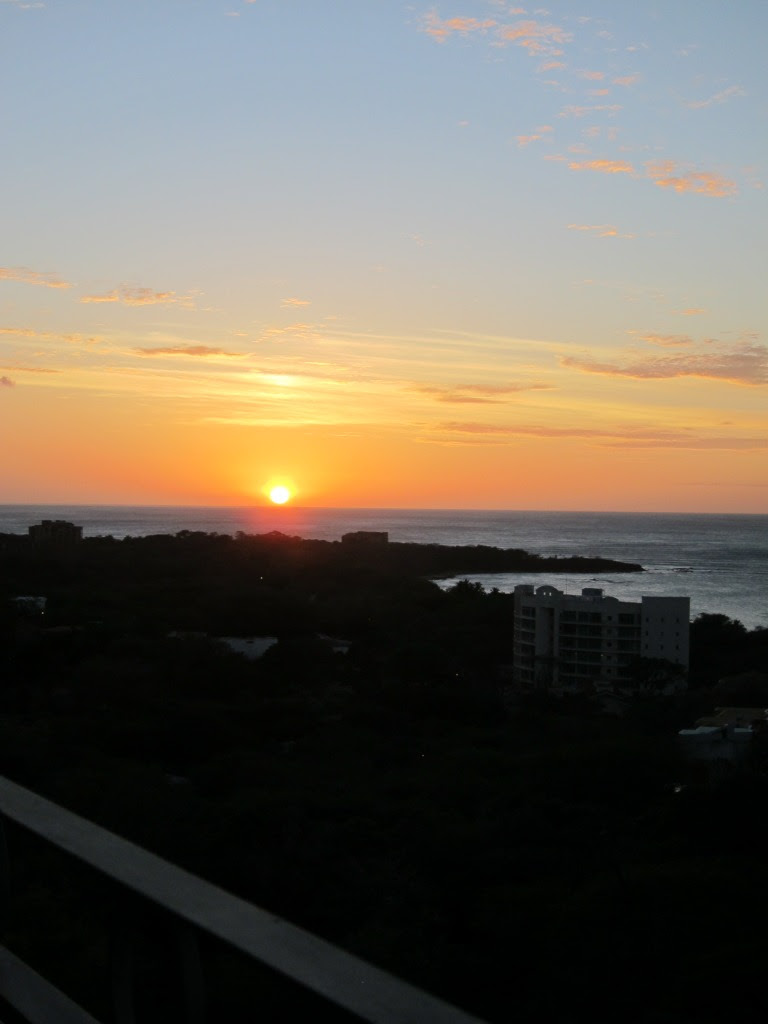 Later we drank champagne while playing round after round of trivia before finally setting out with every other person in Tamarindo to watch the fireworks on the beach. On our stroll down the hill we first came upon a crazy big scary spider that Forest almost stepped on. Luckily that thing moved fast and we all ran away from it. Come to find out it seems to have been a Wandering Spider- highly venomous. Next on our road we came across a large snake with a full belly, a Boa Constrictor! Holy Hell this was some nature walk alright. 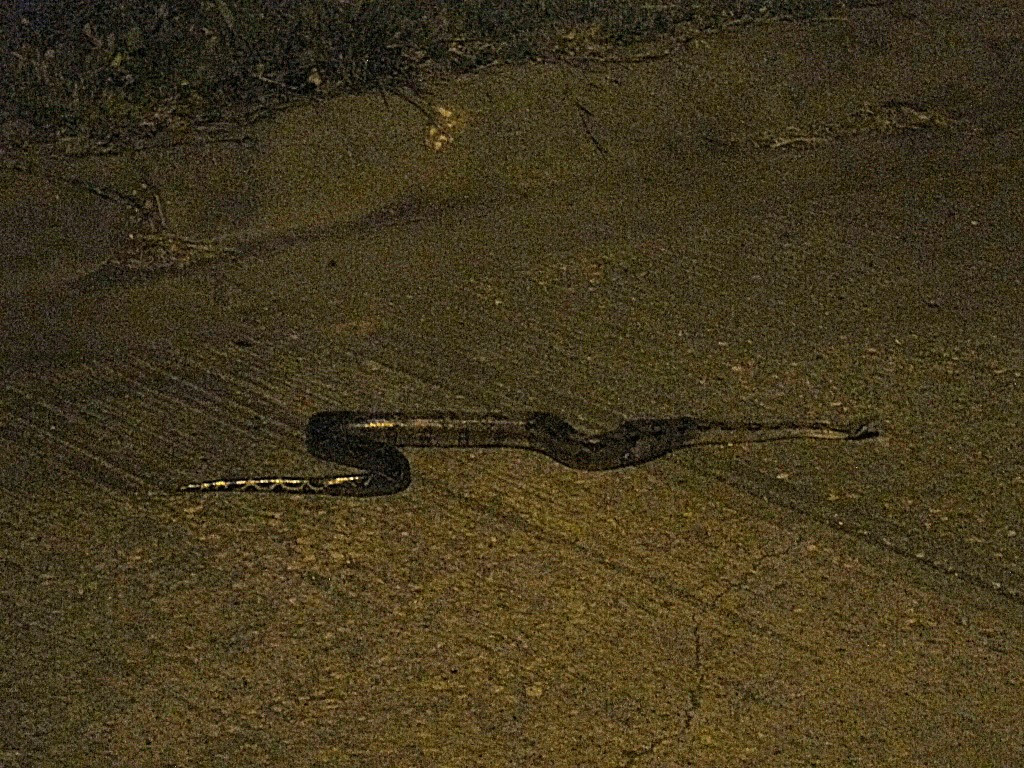 After surviving our trek we found a spot on the beach to sit, watch the fireworks, drink more champagne and enjoy the incredibly warm evening. There were bon fires and floating lit lanterns lighting up the sky, it was quite pretty and very fun. 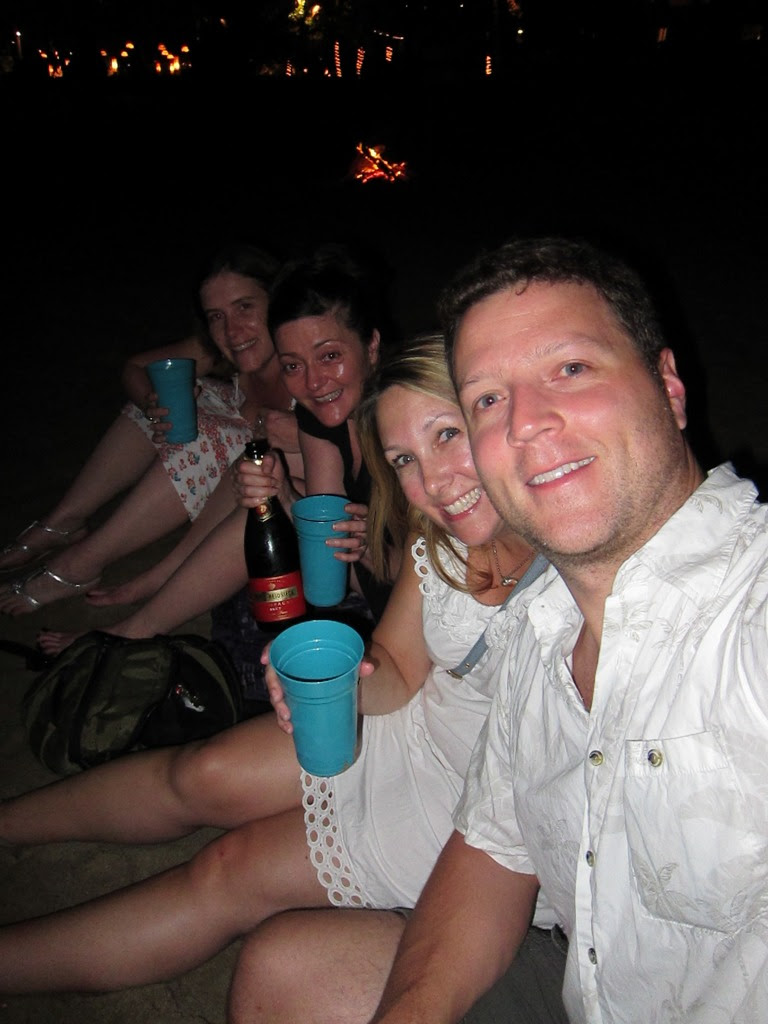 Afterwards we took a cab home, we'd seen our share of wildlife for the night! Wishing you all a wonderful 2012 and hope that you were able to spend your holidays with those you love. More on Costa Rica (& still more on last years trips) soon.