Lake Tahoe in the Spring

What should have been a 5 hour drive from Yosemite to Lake Tahoe took me 6. It was a Wednesday before the first big weekend of the season and there was a lot road construction in the park to get ready. Also I started on a road that ended up being closed and had to backtrack a bit.

It was a long drive through little towns that had been established during the California Gold Rush. I drove past Groveland, Angels Camp, Jackson; small town Americana. I didn't have time to stop though, my brother was already in Tahoe and I was excited to meet up with him.

The entire drive was pretty windy but the last part around Emerald Bay on South Lake Tahoe was total white knuckle! I was tired, the road is narrow, has sheer drops on both sides with no guardrails and hairpin turns. It's such a tough drive that the speed limit is 5 MPH! 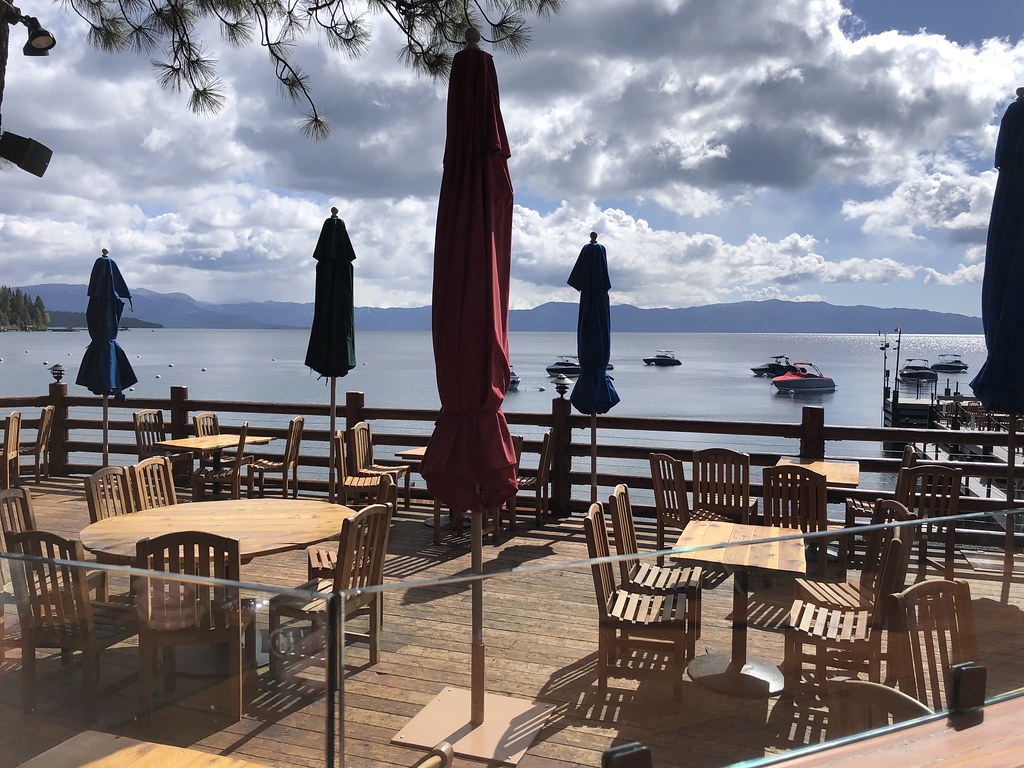 I finally made it to Sunnyside Resort in Tahoe City;  I had booked the Crystal Bay Suite with a balcony overlooking the lake. My brother was waiting for me at the bar (this was the first time I had sat at a bar because of Covid since March 2020!) with Mai Tais. Seemed odd that we each got 2-free Mai Tai vouchers when we checked in. Even more odd when I saw Hula Pie on the dessert menu. Turns out the resort is part of the TS Restaurants chain that owns Duke's and Kimo's in Hawaii. The mai tais were great! We decided to stay in for the night and had dinner in the restaurant and night caps in my room.

The next morning, after coffee on the deck, Mark and I took off to explore the area since I had never been before. The first thing we did was a bit of shopping in Tahoe City as the temperature was dropping rapidly and it was starting to snow! Coming from high 80s and mid 90s I wasn't packed for snow! Welcome to spring at Tahoe. 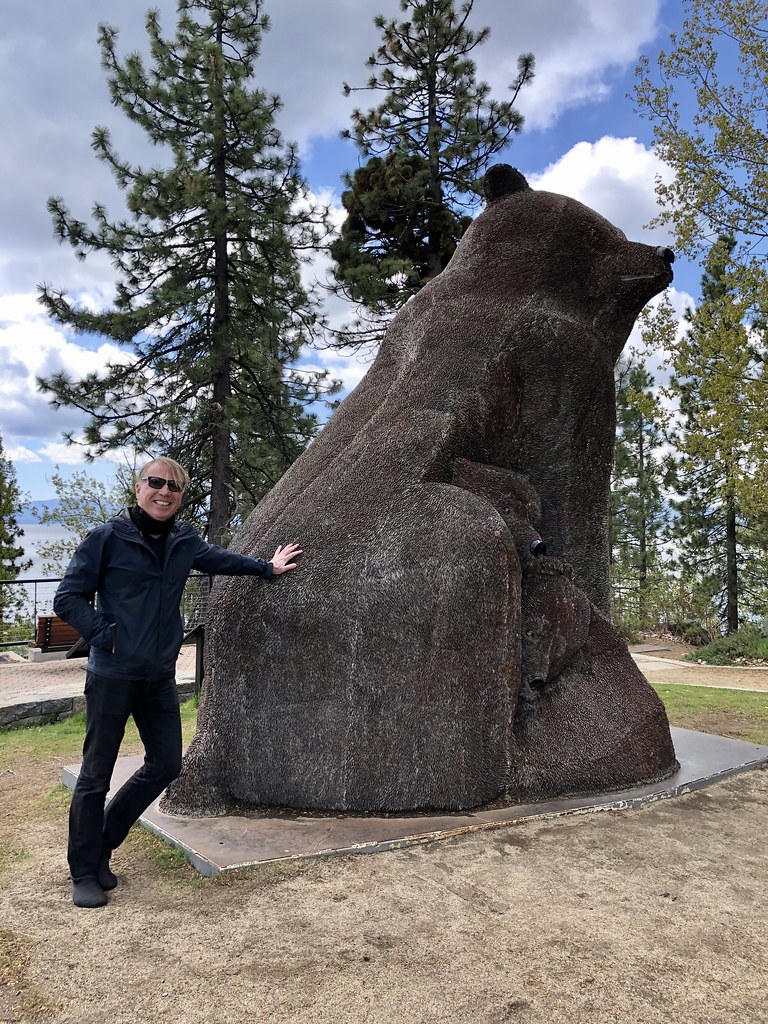 Mark was kind enough to drive for the day and it felt nice to be a passenger again! We continued up to the North Shore/ Carnelian Bay area and had lunch at Gar Woods. Both the food and the view were excellent! 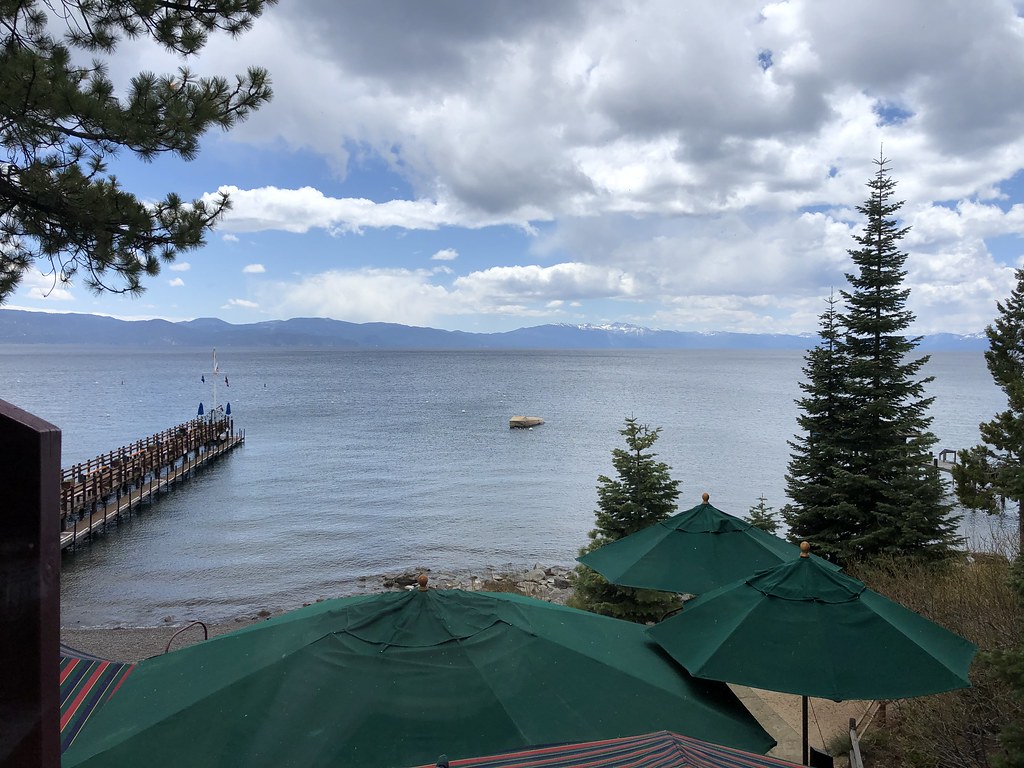 After lunch we continued around the lake on the Nevada side down to South Lake Tahoe. This area is definitely more built up and touristy than small Tahoe City on the west. I preferred the quieter area. 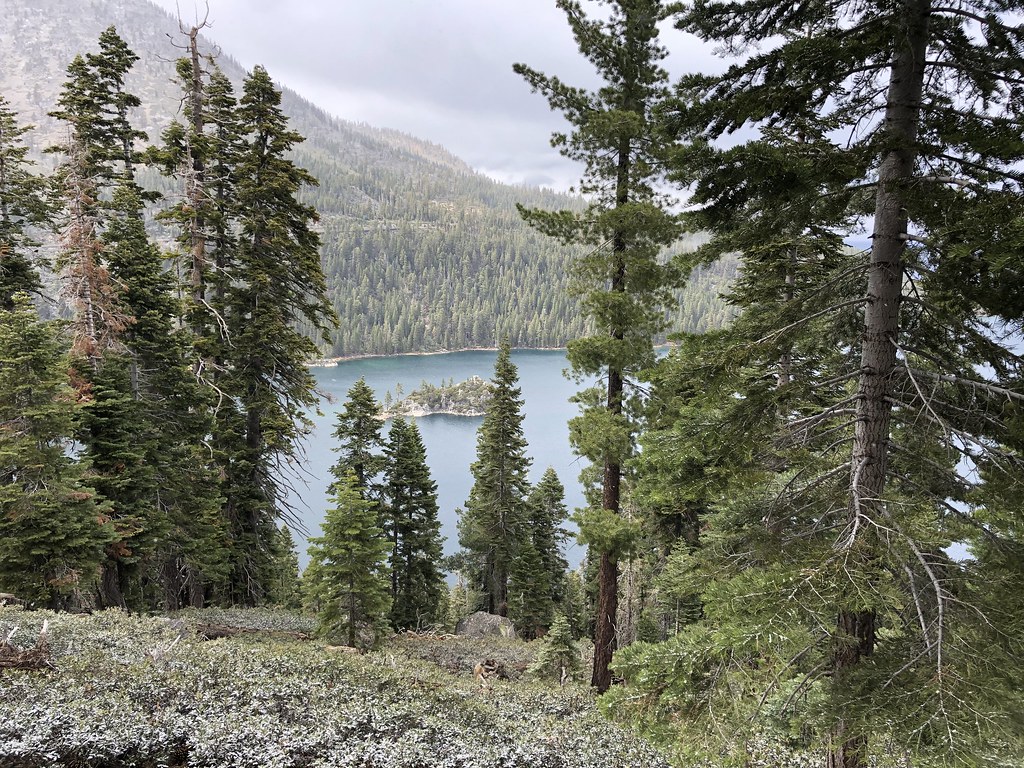 This time when we drove around the 5 mph hairpin turns of Emerald Bay I was able to take in the views. It was still stressful, especially as it was full on snowing, and I was glad to not be driving!

We had originally planned on doing some hiking, but it was an enjoyable day driving around and getting views from all side. We made it back to the lodge and enjoyed 2 more complimentary mai tais in front of a big roaring fire! 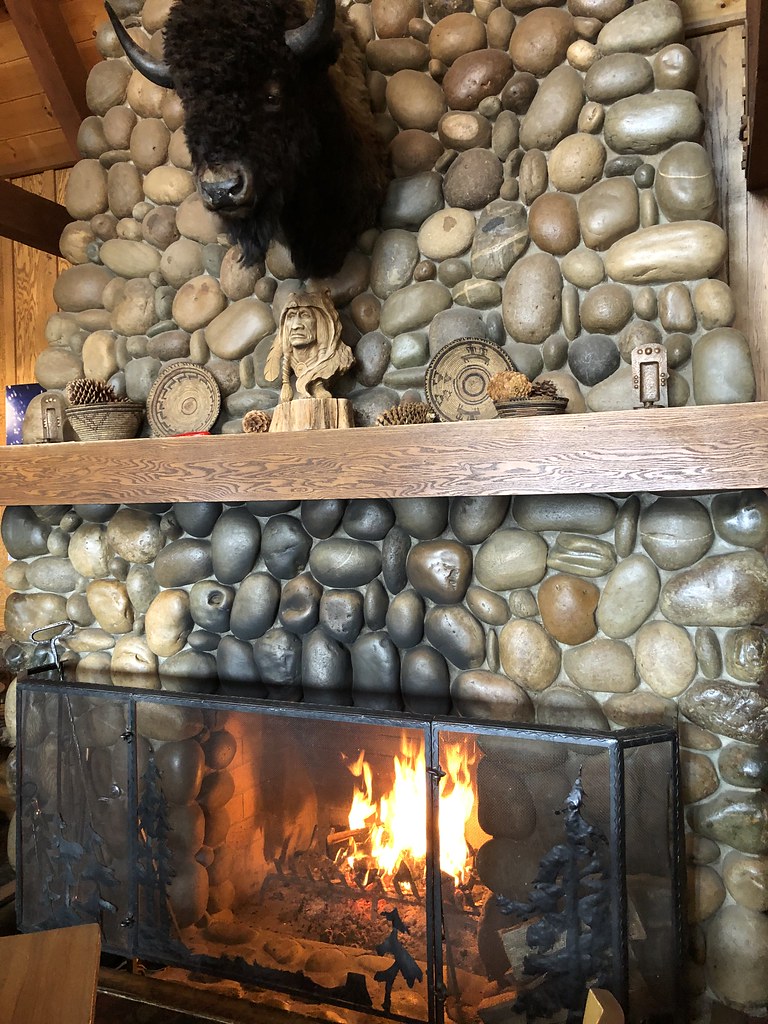 That evening we had a really excellent dinner at Christy Hill Bistro. Our starter was the Yukon Gold Potato Hash, with pork loin, pearl onions, buttermilk dressing, and poached egg. YUM! My brother had a lovely steak dish and I had a pasta with rabbit. I'd highly recommend this restaurant, reservations are a must!

The next morning, after breakfast in front of the fire, I drove us to nearby Truckee. The tiny town is super cute and is steeped in history. It's here that the Emigrant Trail acted as a gateway for thousands of people headed west in hopes of opportunity, success, and adventure. 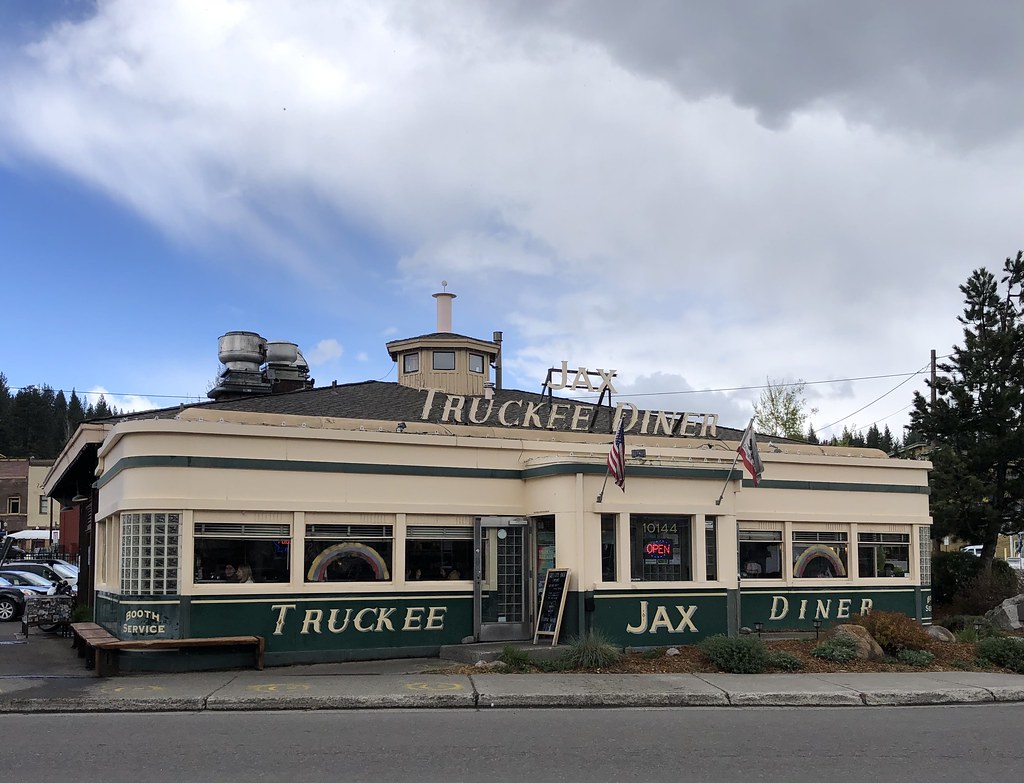 The town gets crazy amounts of snowfall during the winter, averaging 168" of snow per year. Compare that to the national average of 28" of snow per year!! Truckee is just east of Donner Pass, known for the tragic fate of the Donner Party who tried to cross it in the winter of 1846.

And because I have a fascination with odd things, I had told my brother that I really wanted to drive over the pass and then explore some of the abandoned train tunnels. And because he is the best, he said ok! 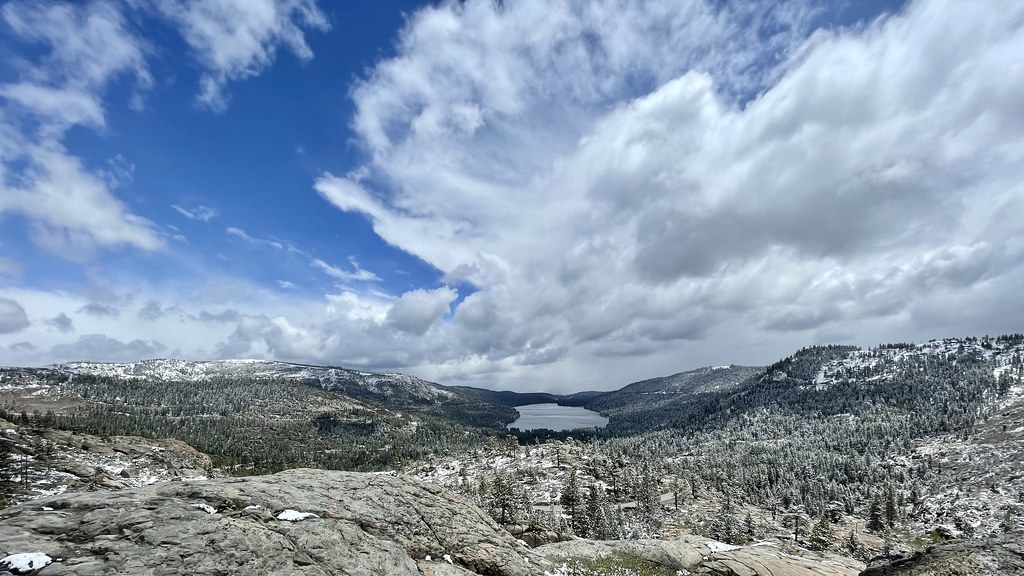 We got off of I 80 and took Donner Summit Road to McGlashan Point. This incredible viewpoint sits at about 6,500 feet elevation. It's dramatic to say the least!! There is a marker commemorating Charles Fayette McGlashan (1847-1931) which counts him as "Truckee’s patriarch, historian, author, editor, attorney, legislator, inventor, entomologist and astronomer." Nearby are also markers to the Donner Pass, Transcontinental Railroad, and others.

We drove over the Donner Summit Bridge and continued following my map to the Donner Tunnels. Unfortunately my map took me to the wrong spot and we hiked in ankle deep snow for a bit until we decided to head back. 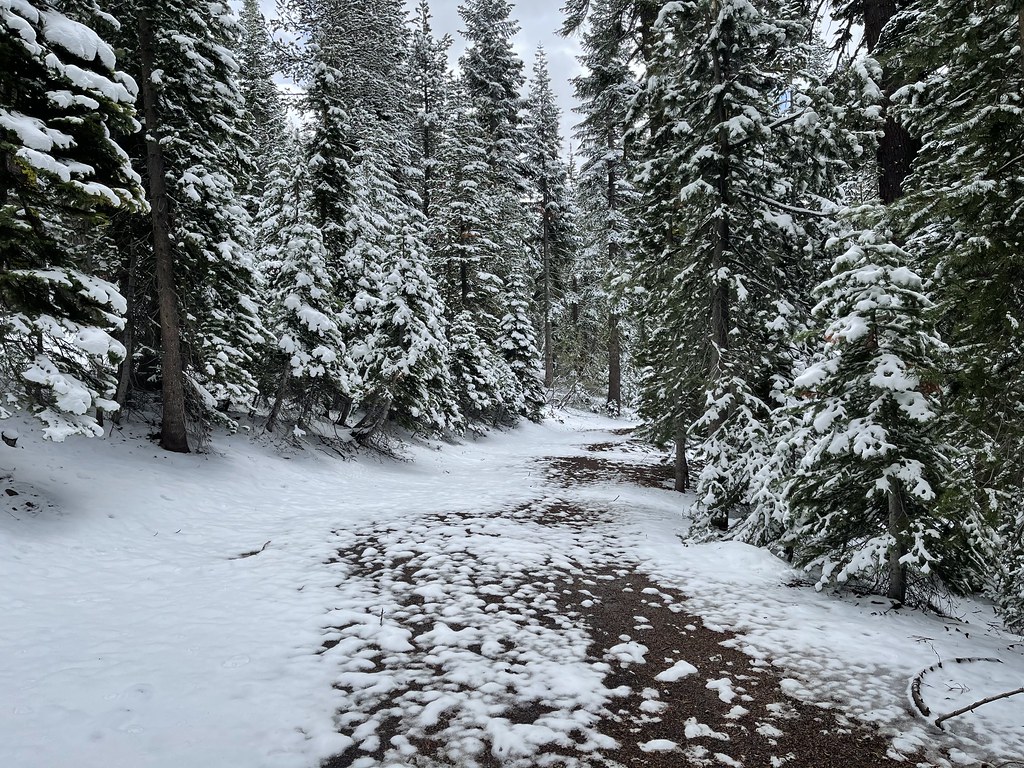 Undeterred, we finally made it to our destination. The connected tunnels are a total of 5-miles, now-abandoned, they were originally built for the transcontinental railroad in 1867 and used for 125 years! Construction was done by Chinese laborers on the route where the first wagon train entered California and stopped being used in 1993. Fascinating!! 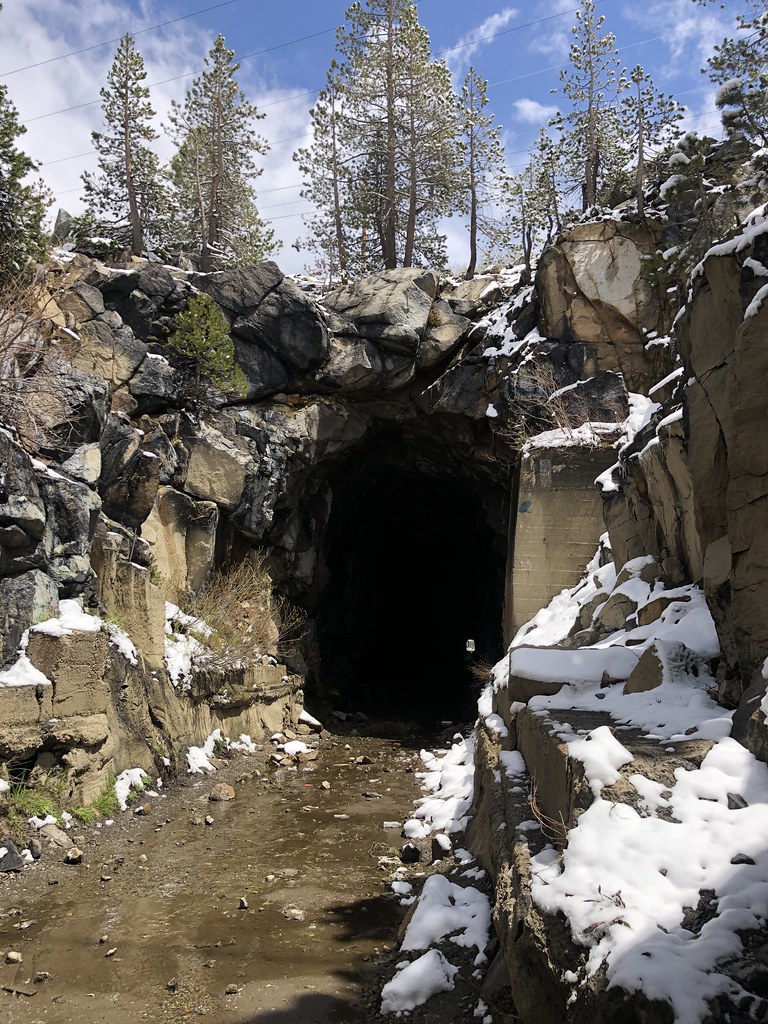 The tunnel was creepy! Water drips from the ceiling and there is just a spot of light at each end.  There is graffiti everywhere and empty cans and bottles from past parties litter the ground where tracks once laid. 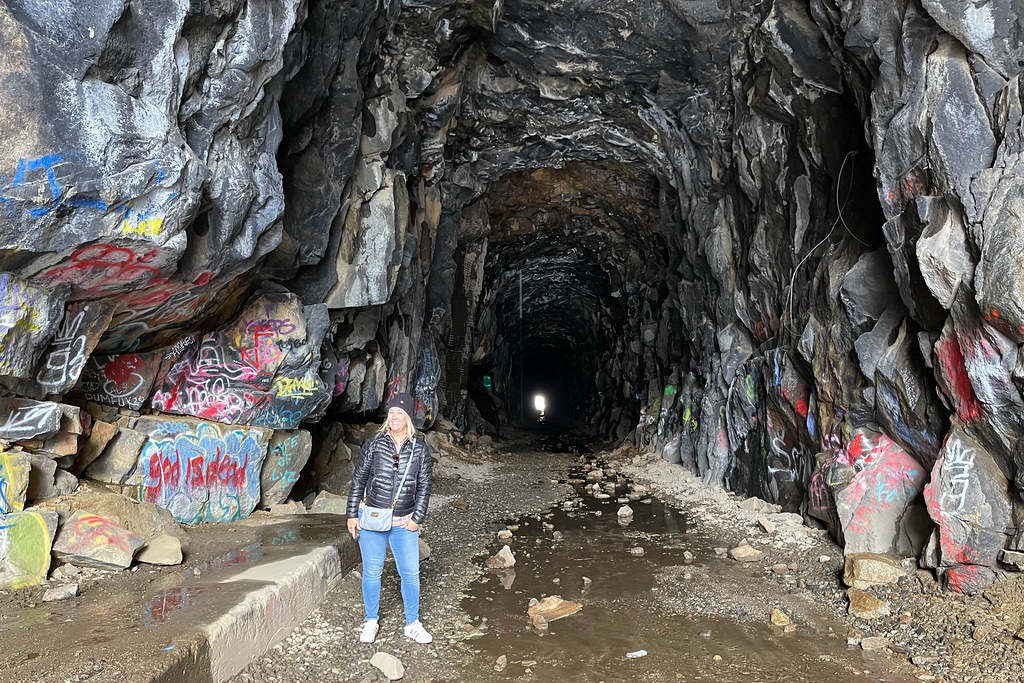 We didn't do much of it as we were ready for lunch, but if you plan to do a full tunnel walk or all 5-miles be sure to bring a headlamp or flashlight. And a friend! 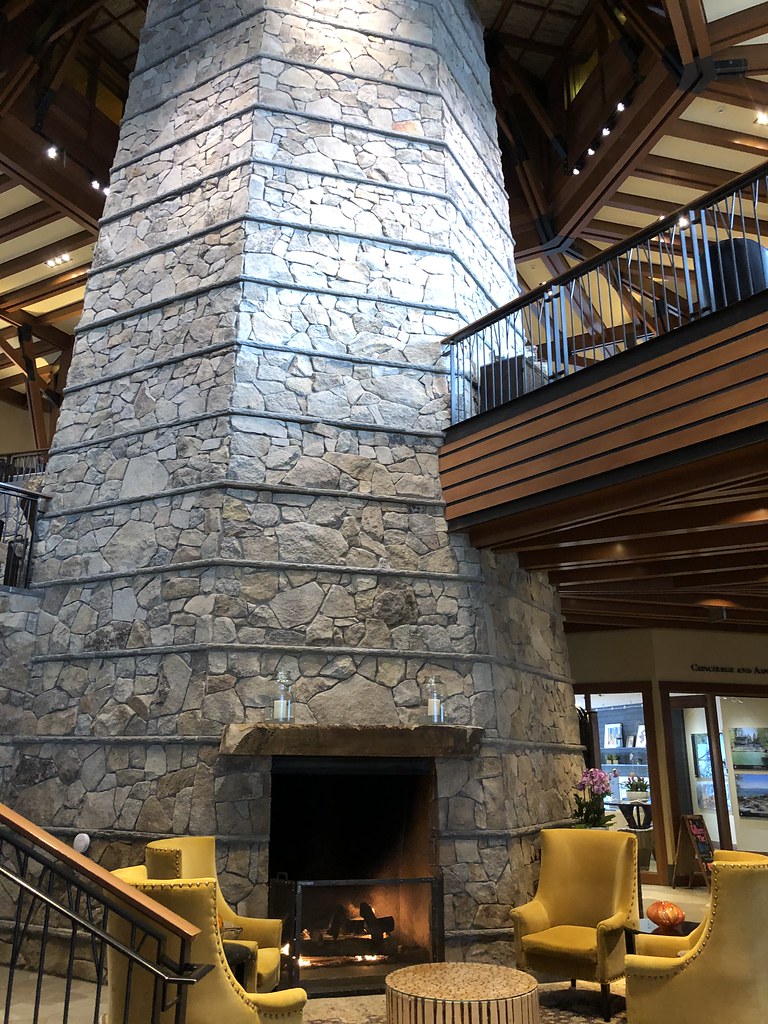 Juxtaposition alert! From here we drove to the Ritz Carlton at the Northstar Ski Resort. The hotel is gorgeous, with a huge 3-story stone chimney and fireplaces on each floor. We had a great lunch and Mark kindly ordered a cocktail so that I could try it :)
If you are visiting the Ritz, it's good to know that the valet parking is $25.
It had snowed the entire day! At the end of May! That evening we had dinner at Jake's on the Lake, which use to be part of the Hawaiian restaurant chain like our resort, so we experienced some more "mountain aloha" along with our steaks. Well Mark had a steak, I had Main lobster tails just to be transcontinental! 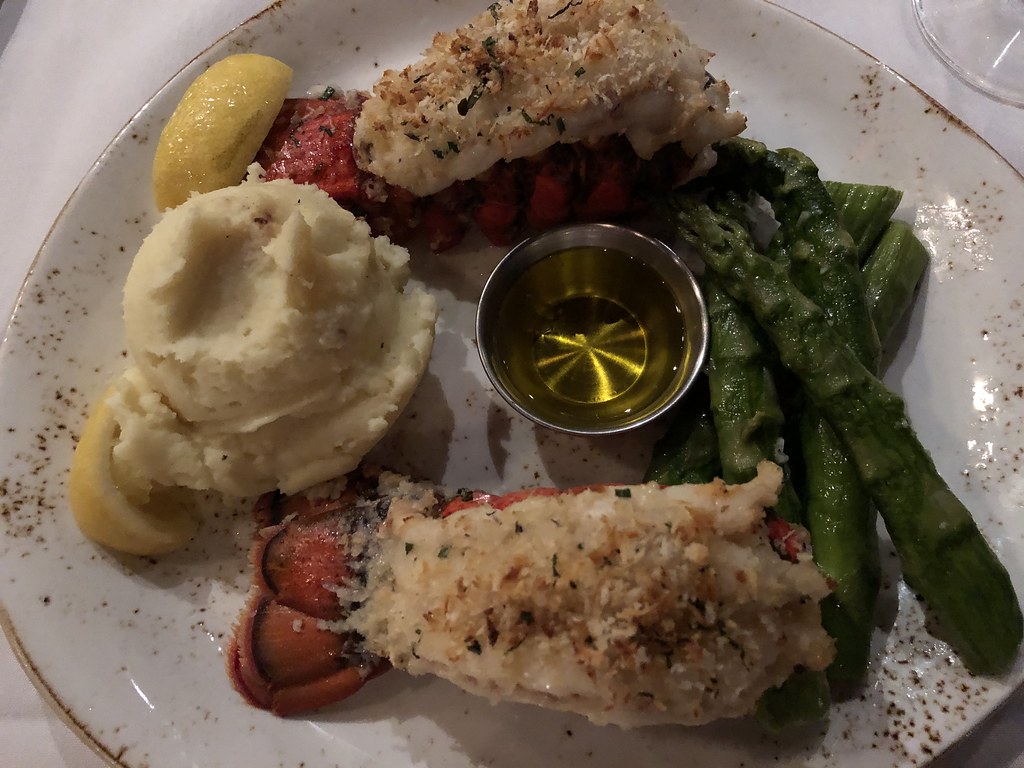 Dinner was very good, and the restaurant also sits looking out over the lake, so it would be a great lunch destination also.
The next morning it continued to snow so we checked the roads before checking out. I decided to take a little different route to my next destination of southern Oregon. It had been a quick 3-nights catching up with my brother and I loved having him around to explore with!
All photos from Lake Tahoe here:
Also on this trip:
Three National Parks, One Road Trip
Sequoia National Park
Kings Canyon National Park
Majestic Yosemite National Park
Rogue River Valley Wine Country
at January 27, 2022