It took me just over 5 hours to drive from Sacramento to the Wuksachi Lodge in Sequoia National Park. Most of the drive was very boring; it was dry, dusty, and hot in central California and not a lot to look at. I took CA99 S to CA180 E and was sure to gas up in Dunlap, as there are no gas stations inside the park. That ended up not being entirely true as there is one station on Generals Highway that technically sits outside the park boundaries, but best to go in with a full tank. 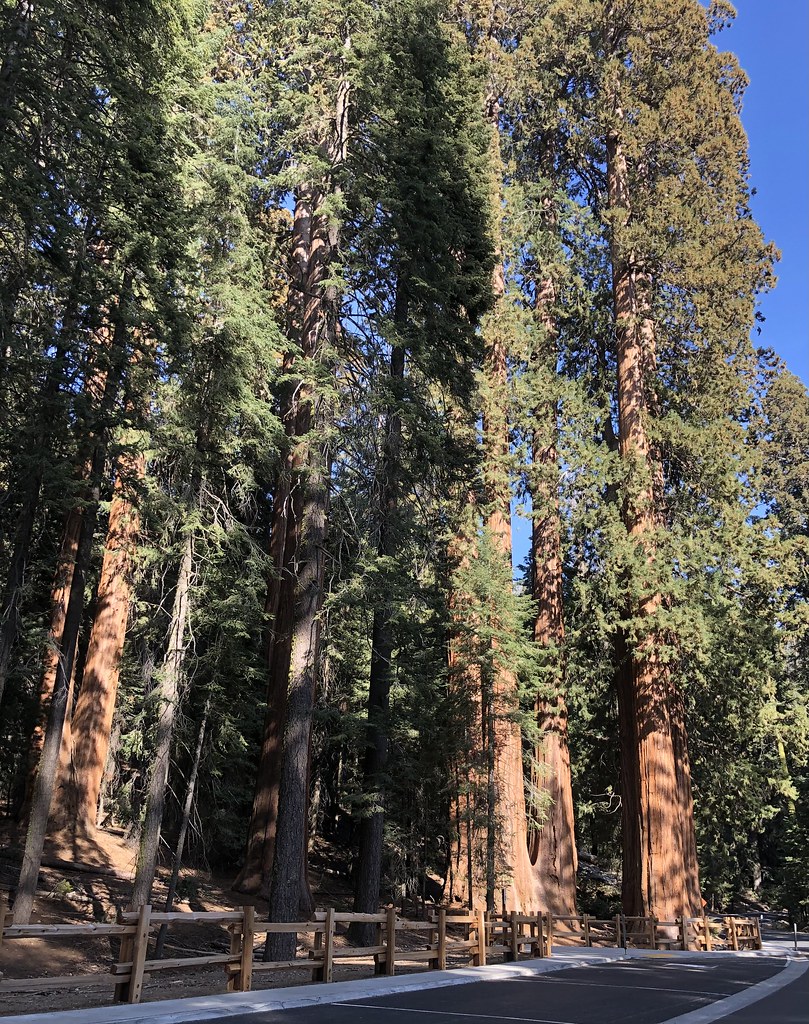 My National Park pass allowed me free entry; even if you have a reservation at one of the lodges or campgrounds inside the park you will still be charged an entry fee if you don't have the pass. It was an easy but slow drive through the park to the lodge; it's a twisty road and you also need to be very aware of wildlife. It's also incredibly beautiful with huge groves of sequoias and pines everywhere. 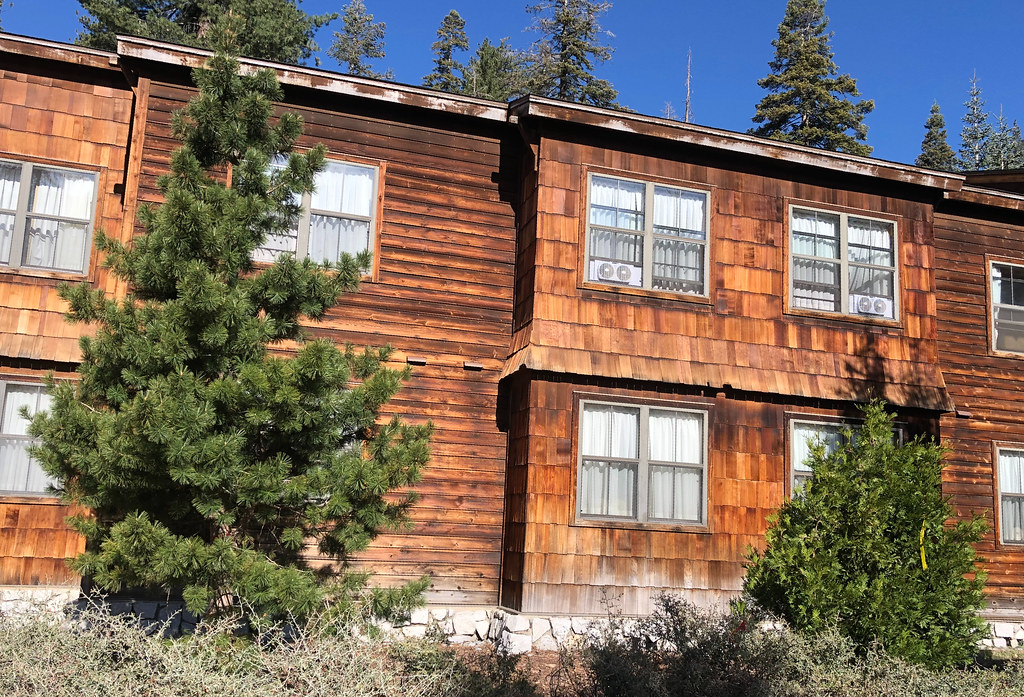 At the Wuksachi I checked in at the main lodge and then drove off to find my building. All rooms are located about 200 feet away and there are parking lots for each building. Spring is bear season in Sequoia and it is no joke! The front desk told me that EVERYTHING needed to be removed from my car- hand lotion, worn masks, cans of Lacroix, grocery bags, etc. Bears can smell possible food sources from over one mile away and have no problem breaking into car trunks to get at it. Luckily there were luggage carts to help, even if I had to push it up a gravel trail to the front doors of my building! 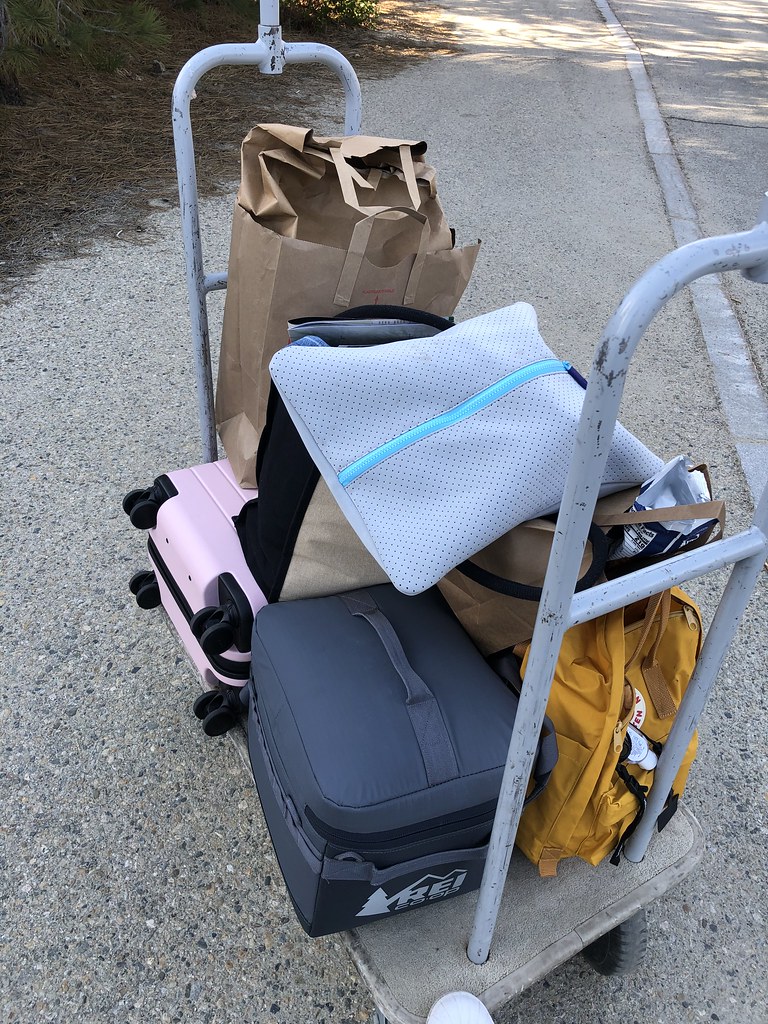 The lodge is at an elevation of 7200 feet;  I hadn't expected that and I could feel it as I hauled all my stuff, especially as it was also over 80F at 5:30pm! My room was really big with a comfy king bed, a full couch, table/chairs, and luckily maintenance came and put a window fan in for me.
The lodge had limited tables in their restaurant available, and an outside deck, but the menu was mainly pizza so I decided to stay in for the night, make a martini and finish my delicious sandwich from Corti Bros. The wifi was pretty much non existent so I watched a movie that I had downloaded before arriving. And when it got dark I could see about a billion stars from my window.

In the morning I had a quick breakfast and coffee outside on the lodge's deck. It was an absolutely gorgeous day and I had a couple of hikes planned and was super excited to get started. 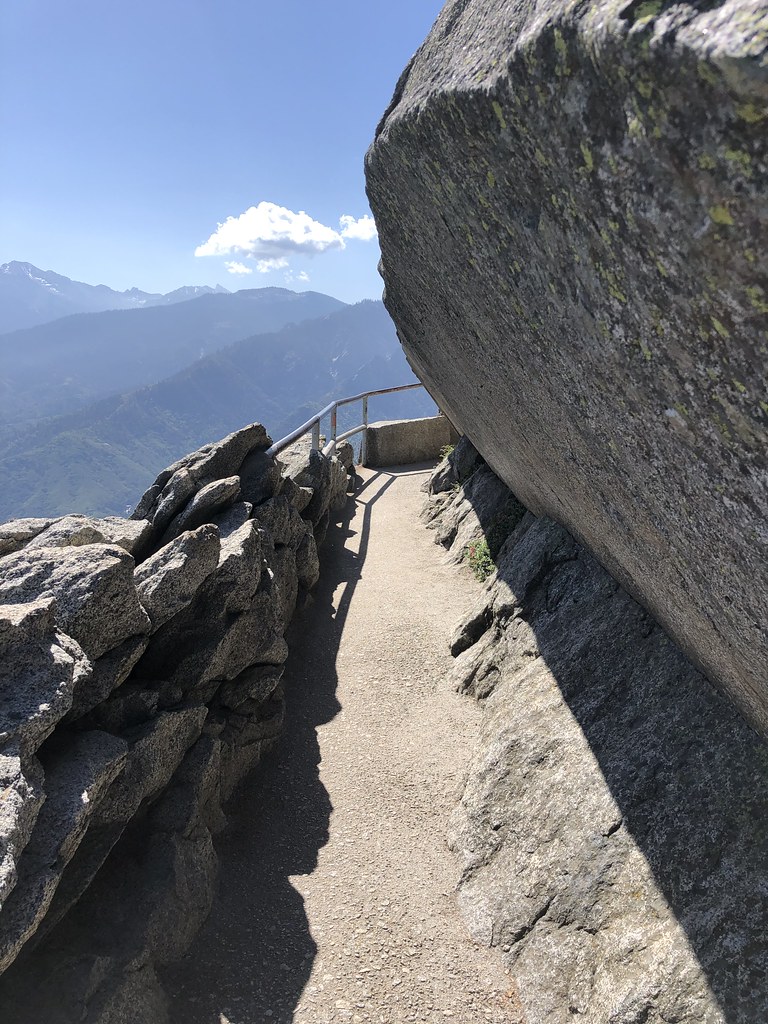 My first stop was Moro Rock, a large granite dome and a very popular hike. Normally you need to park pretty far from the trailhead and take a shuttle because the parking lot gets so crowded, but the shuttle wasn't running yet and I got very lucky with a parking lot right up front.

There are 350 steps that go directly up ½ mile to the top. It's not difficult but it is steep, the steps are very narrow, and it's at an elevation of 6725 feet. The views of the Great Western Divide from the top are absolutely amazing! Also I am supposedly the 4th generation of my family to have hiked up it, my great grandmother being the first to do it when she was 74! 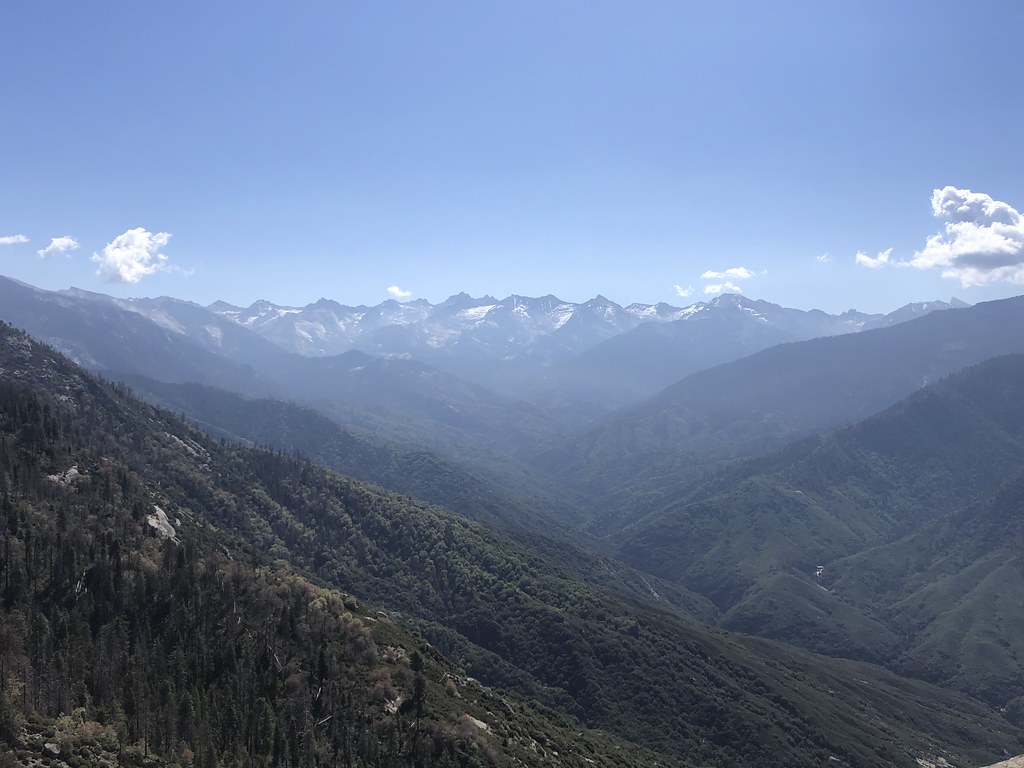 Mountains √, next up BIG ASS TREES.
Giant sequoias are related to coastal redwood trees but they are one of three different species of redwoods (dawn redwood being the third). These massive trees naturally grown only in a 260 mile area of forest on the western slopes of the Sierra Nevada mountains, between 5,000 and 7,000 feet in elevation. And while coastal redwoods are the tallest trees in the world (Hyperion is thought to be 900+ years old and is 379 feet tall!) giant sequoias are the largest. 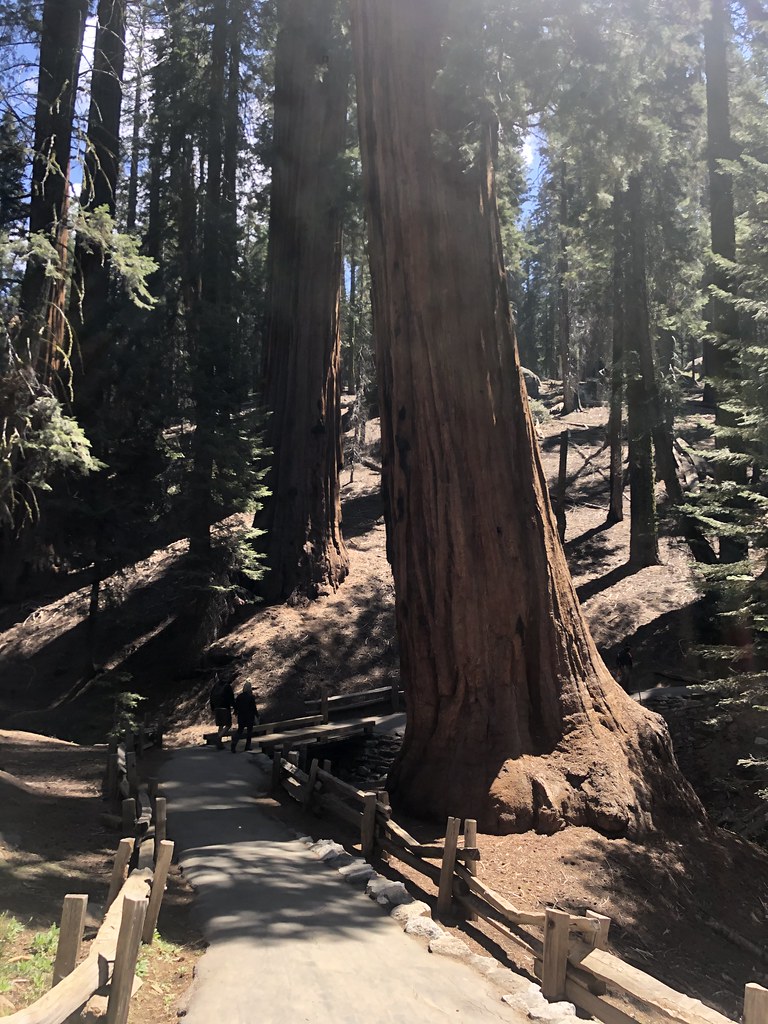 I drove to the parking lot for the Congress Trail, a 2 ½ mile paved loop around the largest groves of sequoias in the Giant Forest area.
First up, the General Sherman Tree, the world's largest tree. It's 275 feet tall and is over 36 feet in diameter at the base. It's absolutely massive to say the least! Did I mention this tree is also estimated to be 2200 years old???
This grove also has the oldest living giant sequoia on earth, the President Tree, estimated to be 3,308 years old and still growing! The President also is estimated to have 2 billion leaves! I had to google what was going on in the world 3000 years ago, do you know? Egypt was building pyramids and they invented paper. And this tree was a sapling. It's hard to wrap your head around! 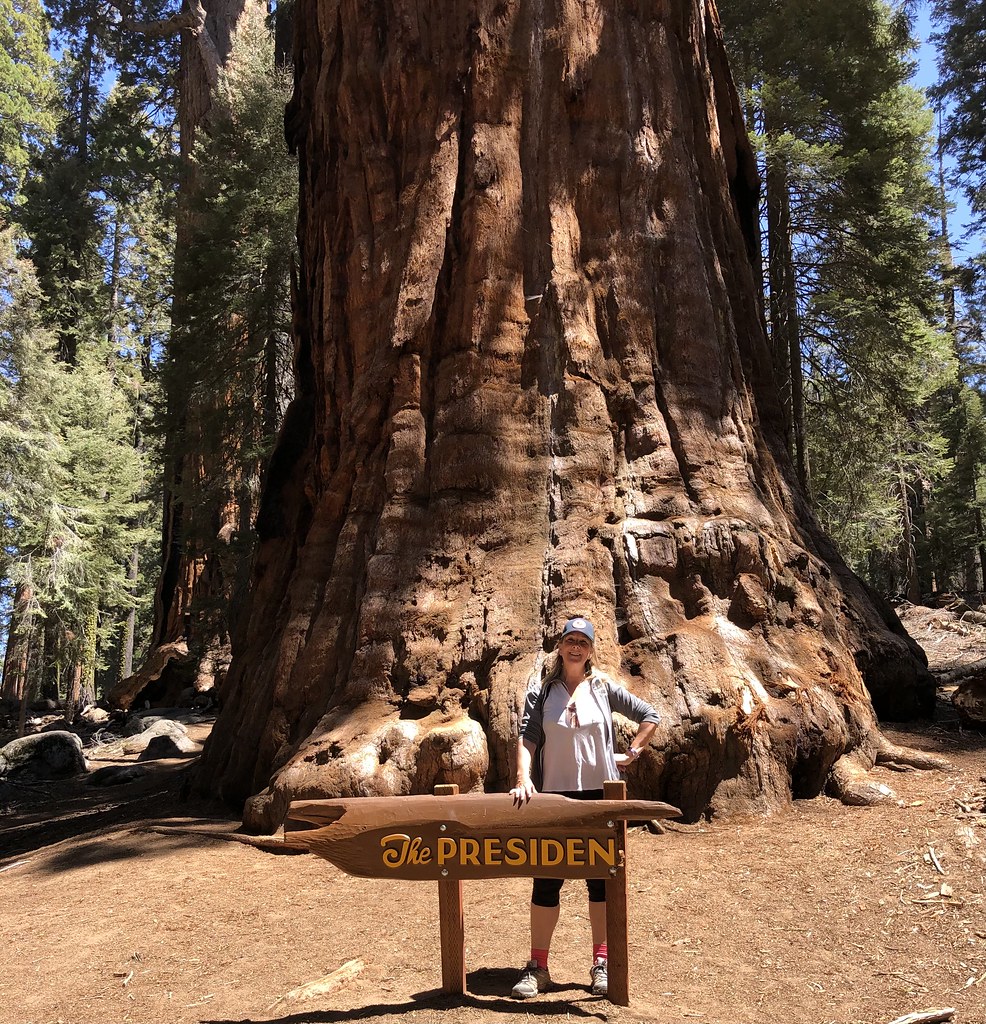 Originally I had intended to veer off this trail and connect to a longer loop thru one of the meadows, but as I was solo and it was bear season I got a little uncomfortable when I was about ½ mile in and realized there was absolutely no one else around. So I backtracked and finished the loop, thoroughly enjoying every tree. This grove called The House was especially great as you could walk in between and around them. 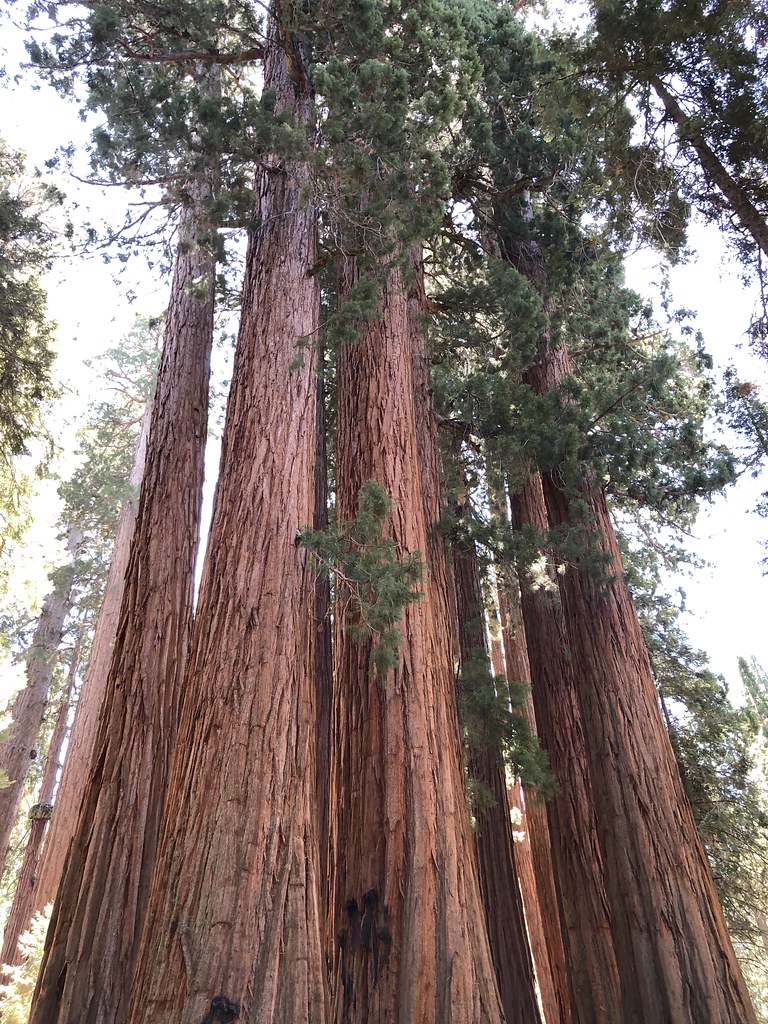 I had a lovely picnic lunch surrounded by these giants (and a few hundred other tree appreciators), it's an unmissable trail in my opinion. And although it's very easy, it is at 7,000 feet. I found myself catching my breath as I walked back to the parking lot which is an uphill climb. 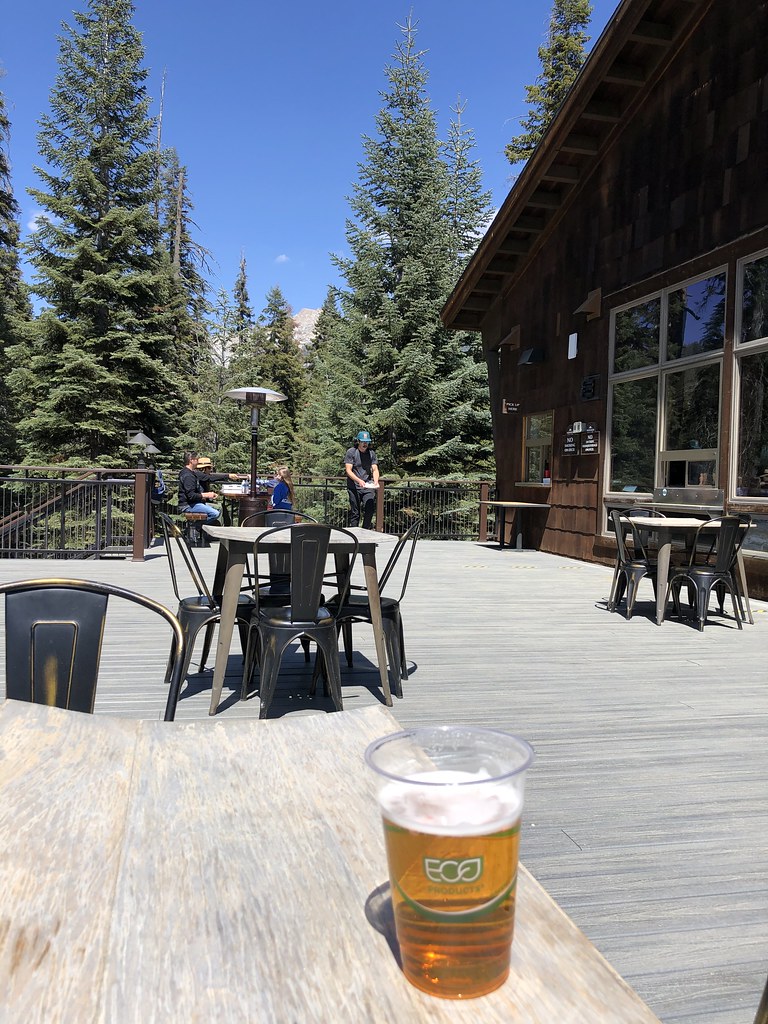 There was a well deserved beer on the deck when I got back to the lodge!
The next day I packed up and checked out, I was moving on to Kings Canyon National Park, but not before doing one last hike in Sequoia.
It was a little risky as I'd be leaving my parked car with my cooler, case of Lacroix, toiletries, etc. in the parking lot of the Lodgepole campground. As I've mentioned, this was bear season and there had been a lot of bear activity in the area. I hoped that since it was a busy campground people would deter any thieving bears. 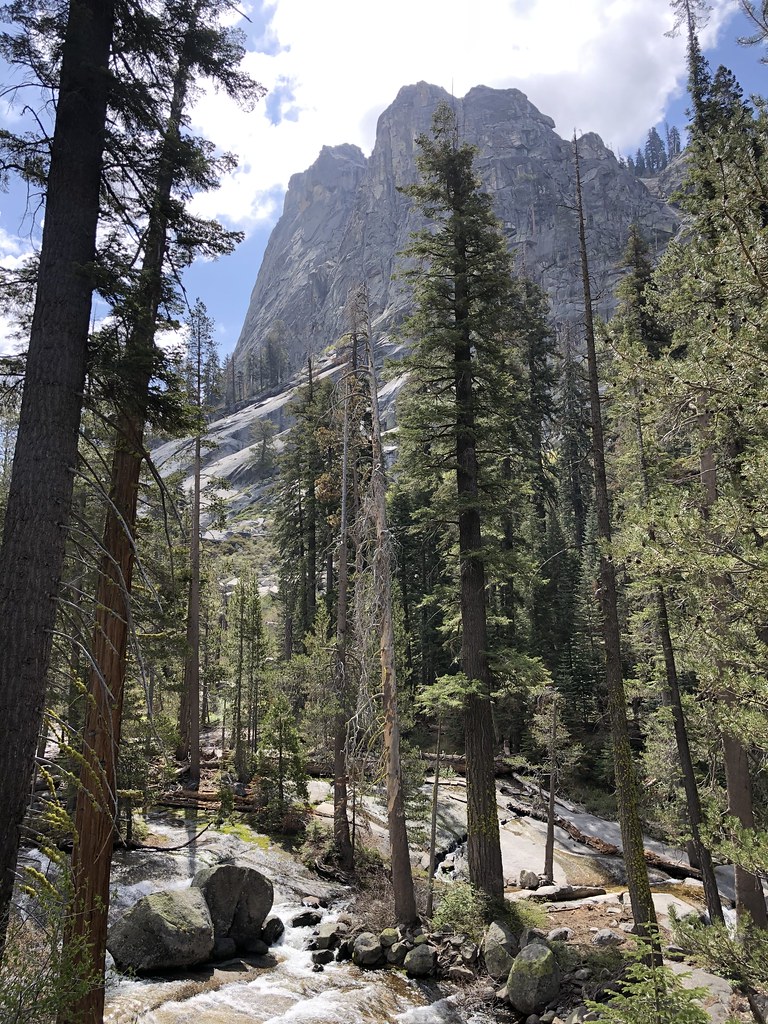 Tokopah Falls Trail is a 4 mile out and back hike with about a 530 foot elevation gain. It's an absolutely gorgeous hike along the river, through granite canyons, past meadows and forests. It really has it all!
The trail turns into boulders near the end, and you have to scramble a bit to get to where the falls are. Thankfully there were a few people in front of me so I could navigate better! 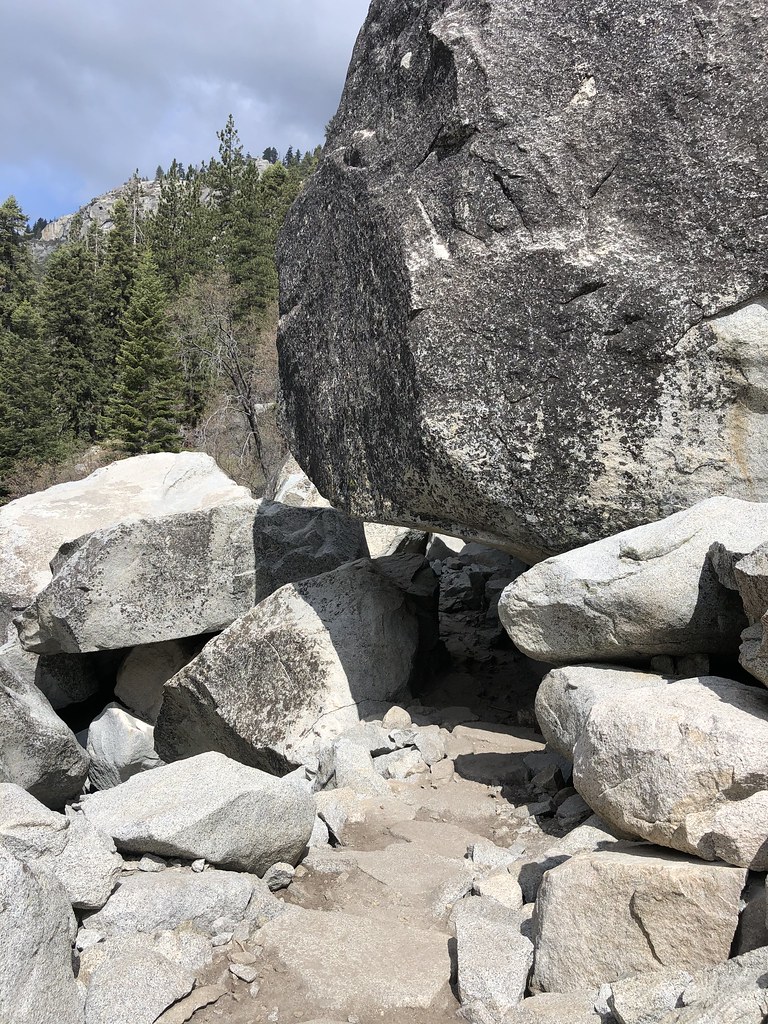 I enjoyed my lunch on one of the boulders while taking in the falls and the surrounding cliffs. It's a great spot!

And while taking some photos I noticed something in the rocks move, my first marmot sighting! And these guys were not shy about looking for a hand out! 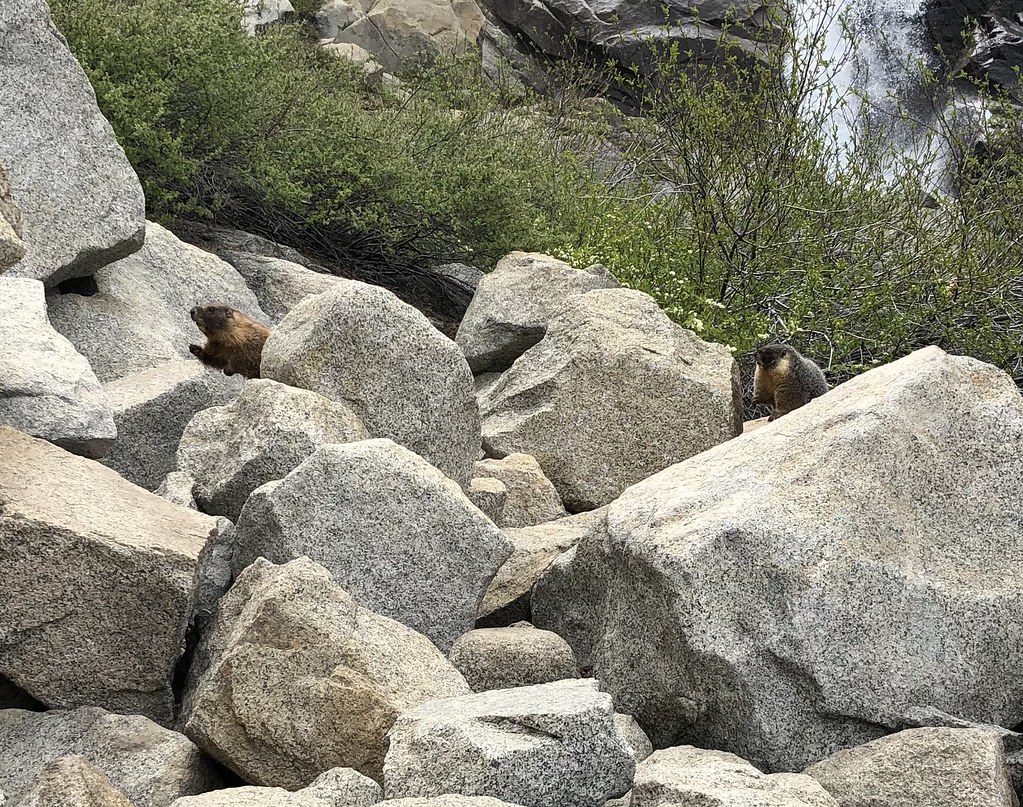 About ½ way back to my car it started to cloud up and drizzle so I had timed it perfectly. And luckily my car had not been broken into by bears, or anyone else for that matter.
I absolutely LOVED Sequoia National Park.
All photos here.

Also on this trip: