My friend Gail and I had such a great time in Sayulita the year before, we decided to go again! This time we also invited our friend Angela and booked the trip over Día de los Muertos, or Day of the Dead. The festive Mexican holiday celebrates and honors the dead and is something I had wanted to witness for a long time. I was excited!

The first day of the celebration, October 31st, is also called All Hallows Eve. During the day we walked through the main square and saw all of the preparations going on. Families were building incredible alters, using dried beans, flowers, grains, etc to create intricate murals on the ground which reminded me of rangoli and are called tapete de arena. The square and surrounding streets had been decorated with hanging fiesta flags (called papel picado), fish caricature cutouts, and all sorts of sea creatures were fashioned out of plastic waste. Brilliant and a not so vague nod to the problems of plastic in our oceans! 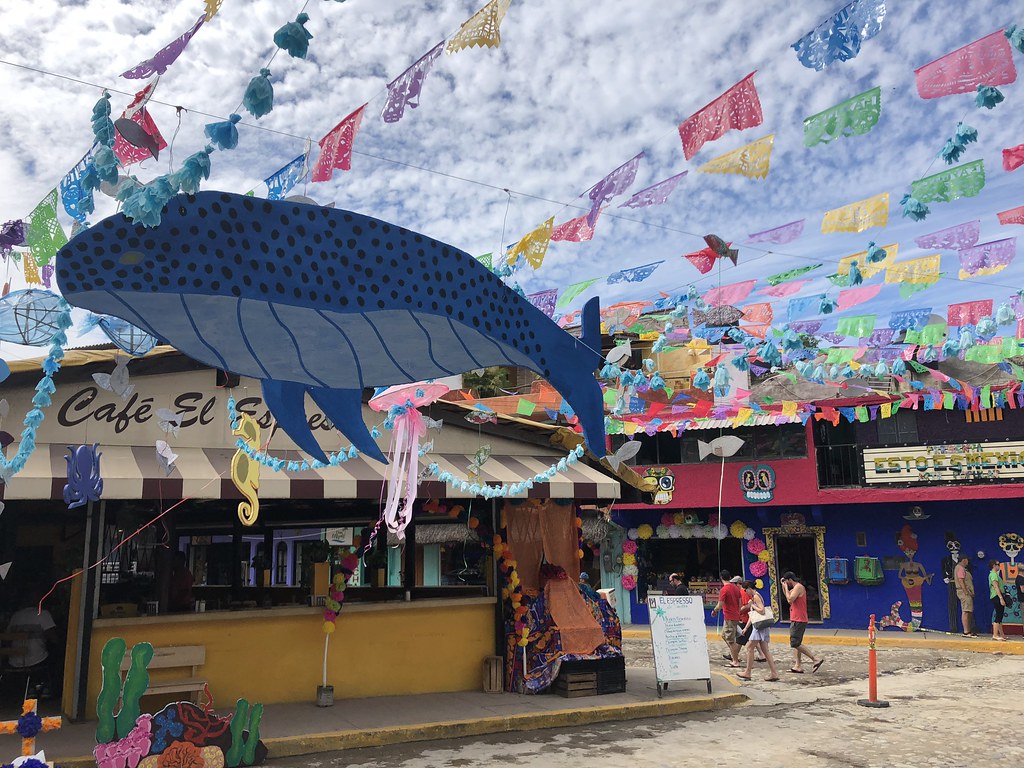 That evening there was a parade through the streets. All Hallows Eve is a celebration for the spirits of dead children, or Angelitos. There was a large stage set up in front of the main square and song and dance performances went on late in the night. The spirits are believed to arrive at midnight so this was all to invite and welcome them. 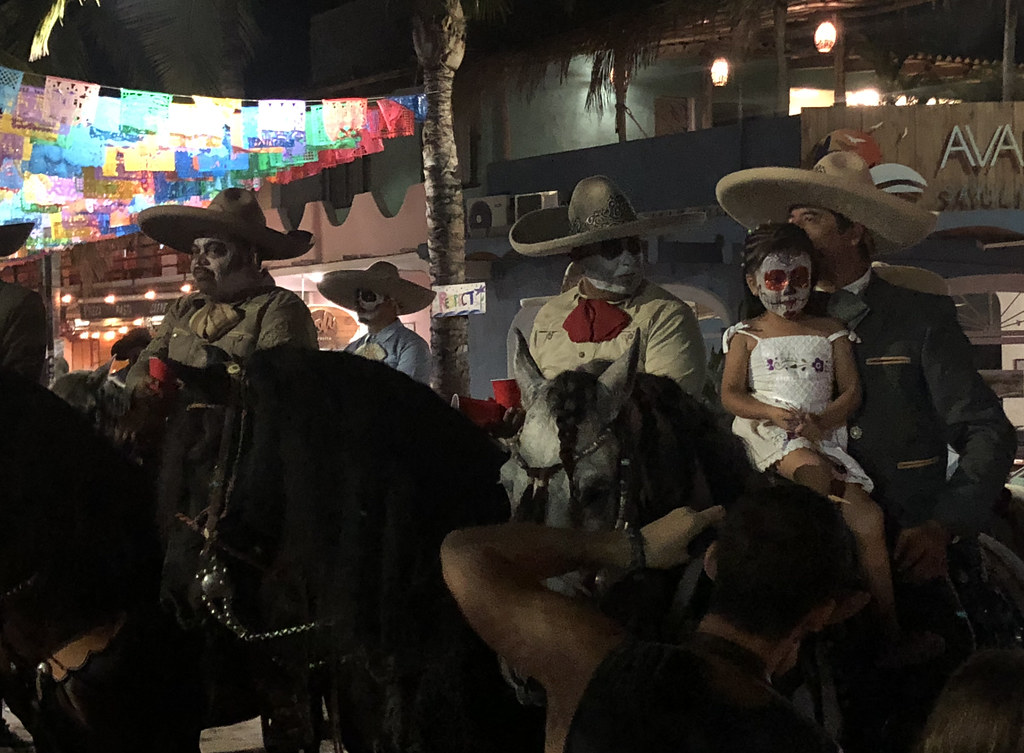 It's not a mournful or scary event. It's quite upbeat, and a time for families to be together. Young and old had their faces painted, there were street food vendors, and constant music. 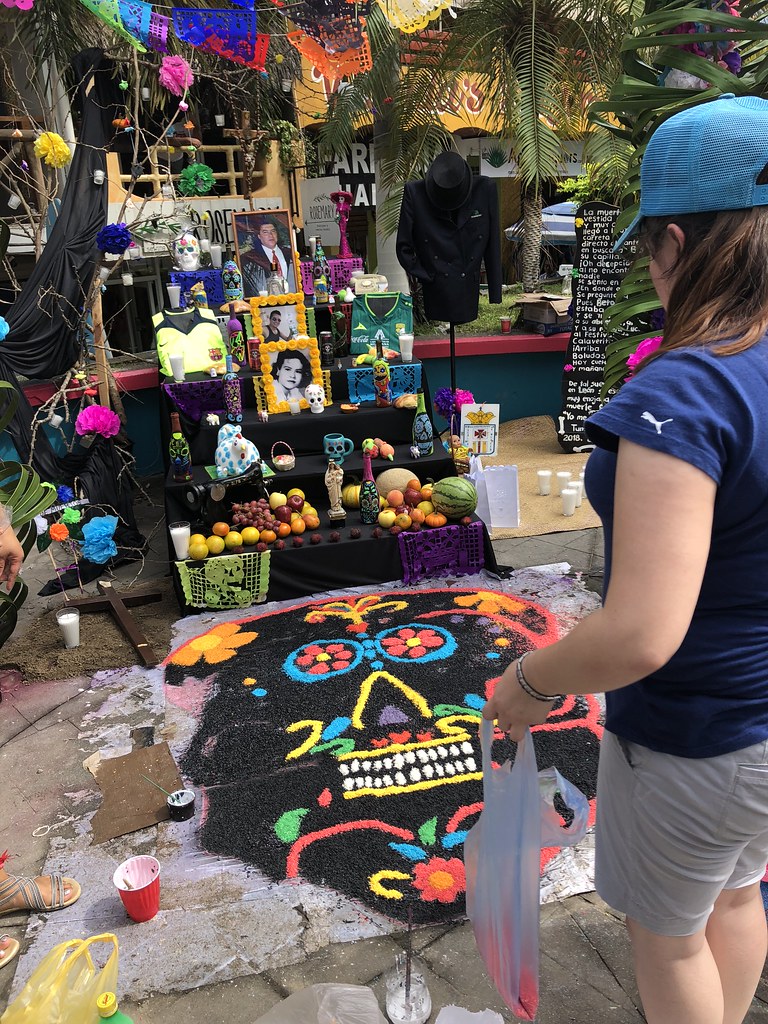 November 1st is All Saint's Day, when families invite the spirits of deceased adults to come visit. The main square was busy with families putting the finishing touches on their alters, or ofrendas. Children were painting and decorating pictures of the traditional skull, and the scent of marigolds was everywhere. 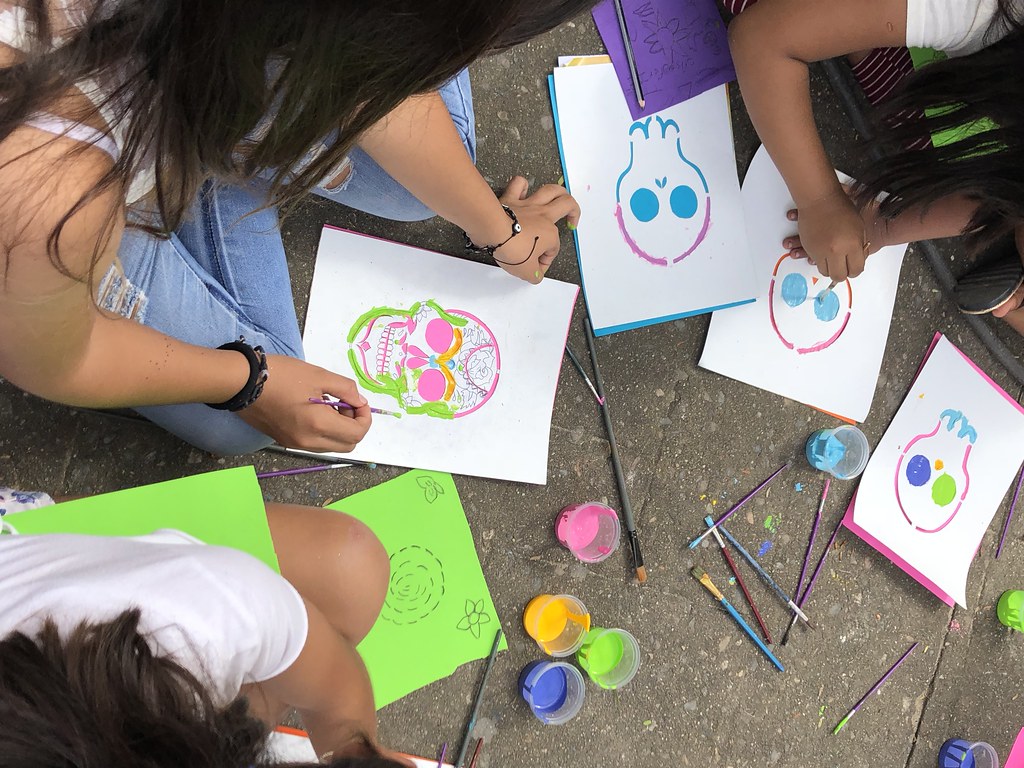 That night's festivities were on a much larger scale than the night before. As we walked from our Airbnb to the town center we noticed decorations on the beach, where the fishing boats are, completed tapete de arenas and ofrendas. There are a number of items that are considered to be required elements on the altars, so we were now seeing the full displays of photos of the deceased, candles, sugar skulls, marigolds, crosses, and offerings of bread, water, fruit, and salt. 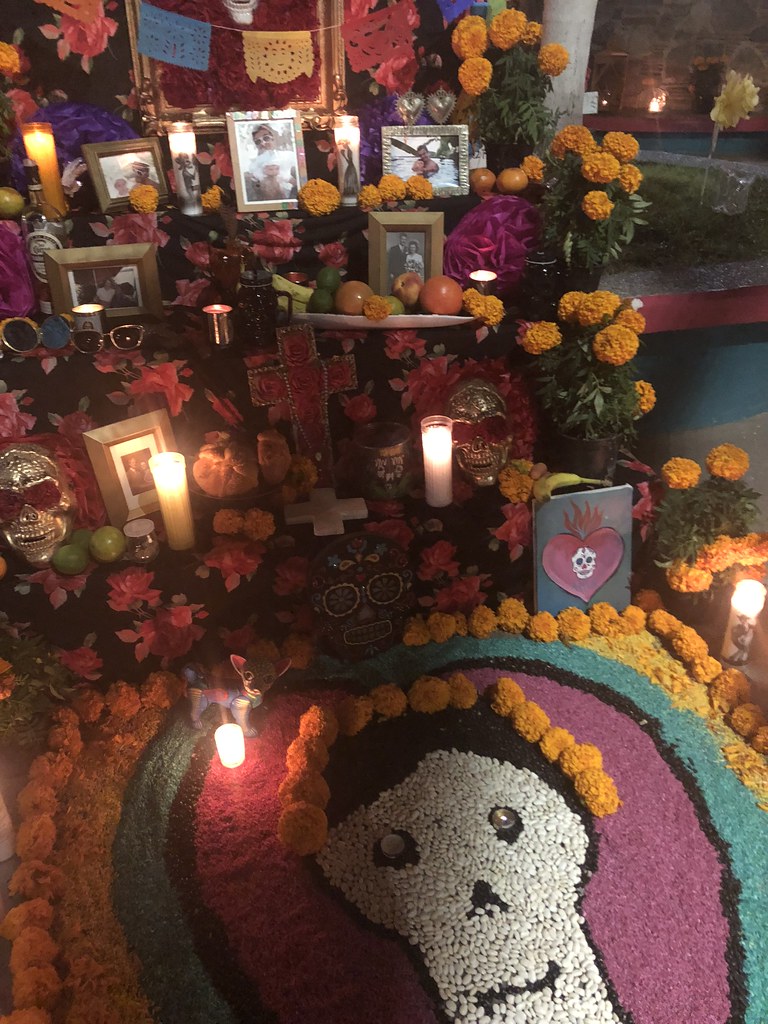 There were a lot more people in costume (not to be confused with Halloween costumes), and the stage entertainment had more professional dancers, singers, and musicians. It seemed like the entire town was out! 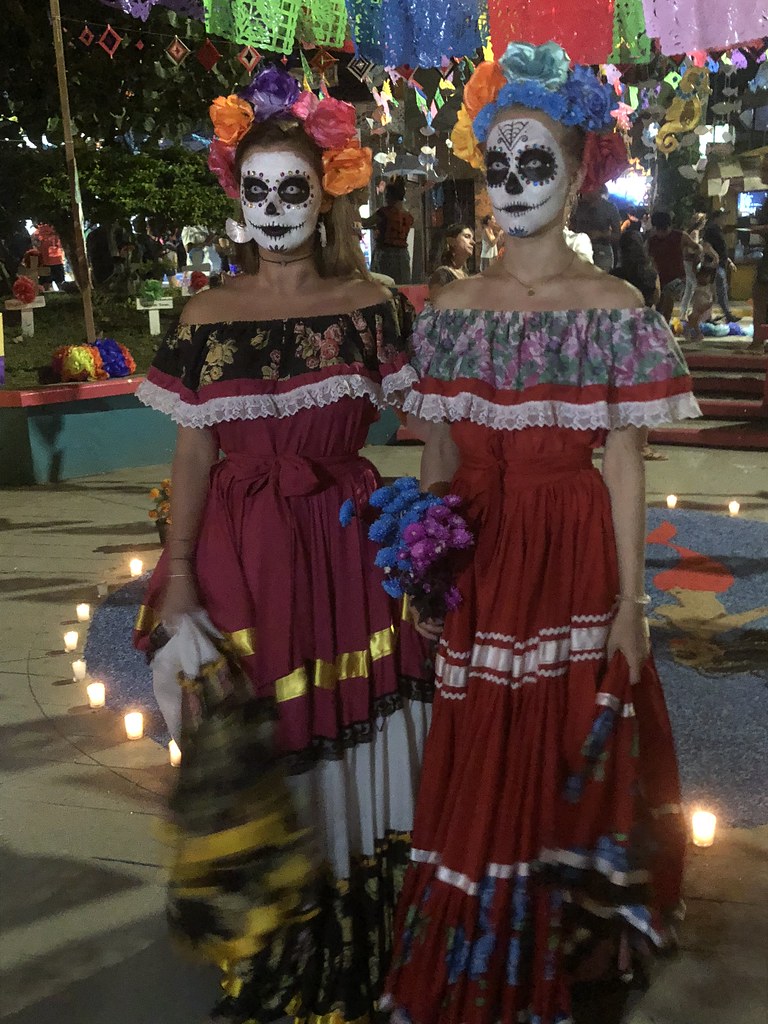 At about 12:30am everyone formed a procession and a mariachi band led us through the streets of town. Many people held lit candles and sang along. Some people had torches to light the way and there were large paper maché puppets that were carried thru the streets (seemed dangerous!). As we walked more and more people joined.

At the beach where the fishing boats were, the progression stopped. The band kept playing and people danced and sang. It was quite a sight! After a bit we resumed along the path that leads to the cemetery and entered under the arch. 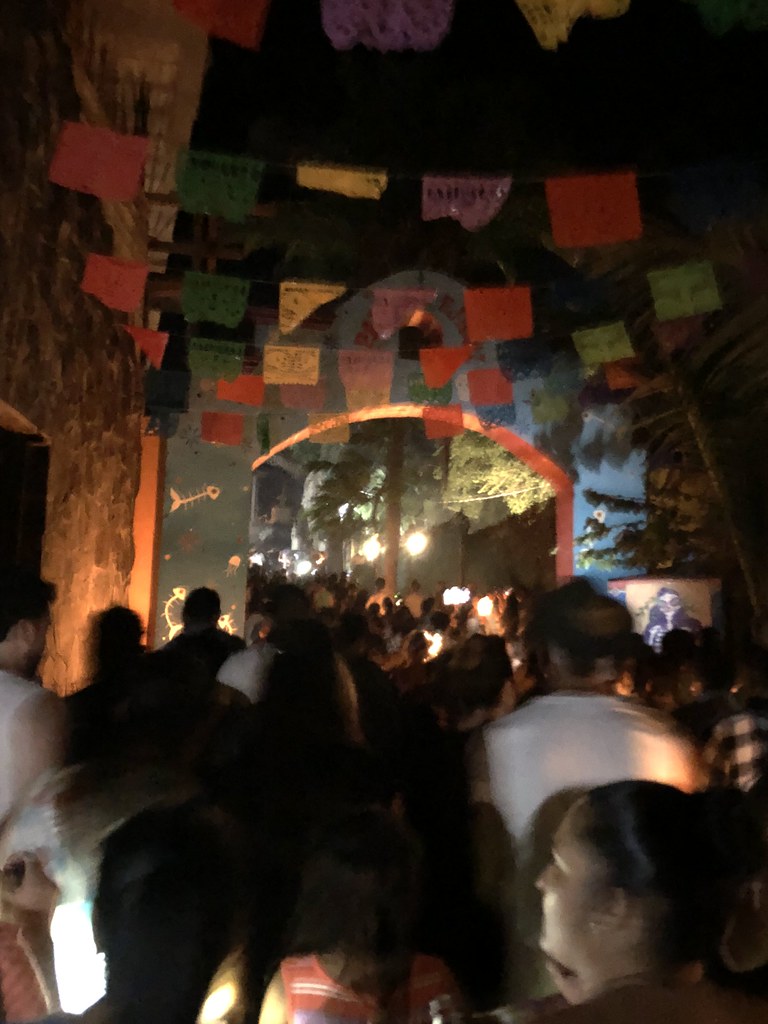 Inside, families had decorated the gravestones and tombs of their relatives and loved ones. Candles flickered from every grave. People had set up music, food, and drink and were celebrating with each other, and with the soul's of the departed as the belief is. It was an incredible sight and as one of the very few tourists witnessing it, I felt very lucky to be there. 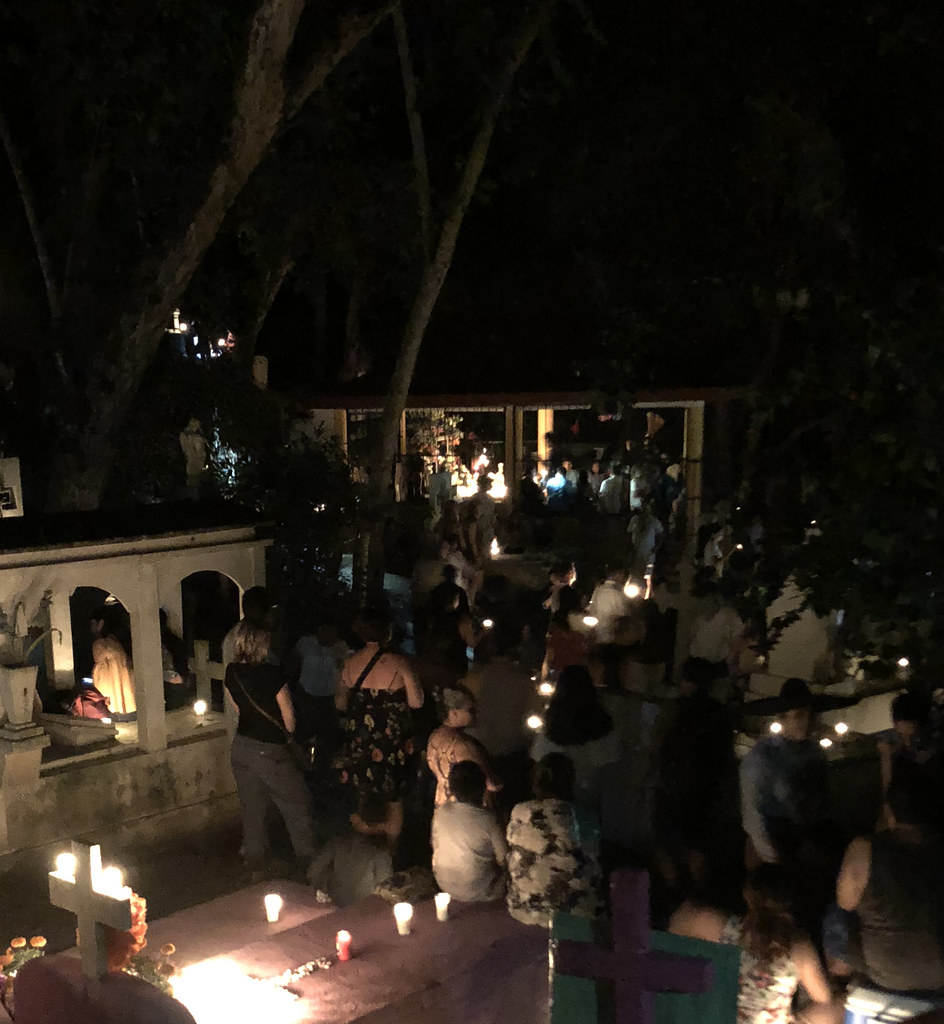 The parties went on all night, literally until dawn!

The final day is All Souls Day and the celebration repeats itself. Back in the main square it was amazing to see all the altars completely undisturbed! Everything was still in place, although most of the sugar skulls were covered with bees! 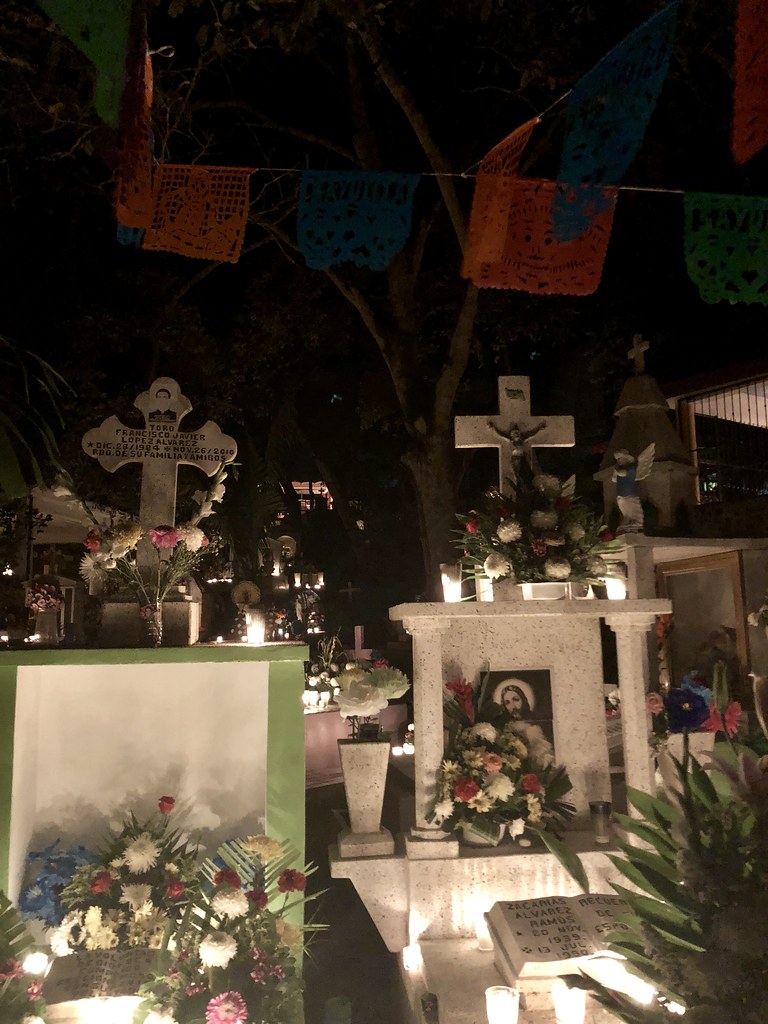 We walked through the cemetery early to get a closer look at some of the decorated grave sites. Families were setting up for the last night of visiting with their deceased and each other. It was all very beautiful. We didn't attend the festivities and procession that night, but we could hear it all going on until dawn again!

Experiencing Dia de los Muertos in a small (but growing) fishing village was fantastic! It was awesome to witness such a traditional and local celebration without feeling like I was intruding. I highly recommend it!