Sometimes one of my friends says "let's meet in NYC and check out that exhibit at The Whitney", and away I go... 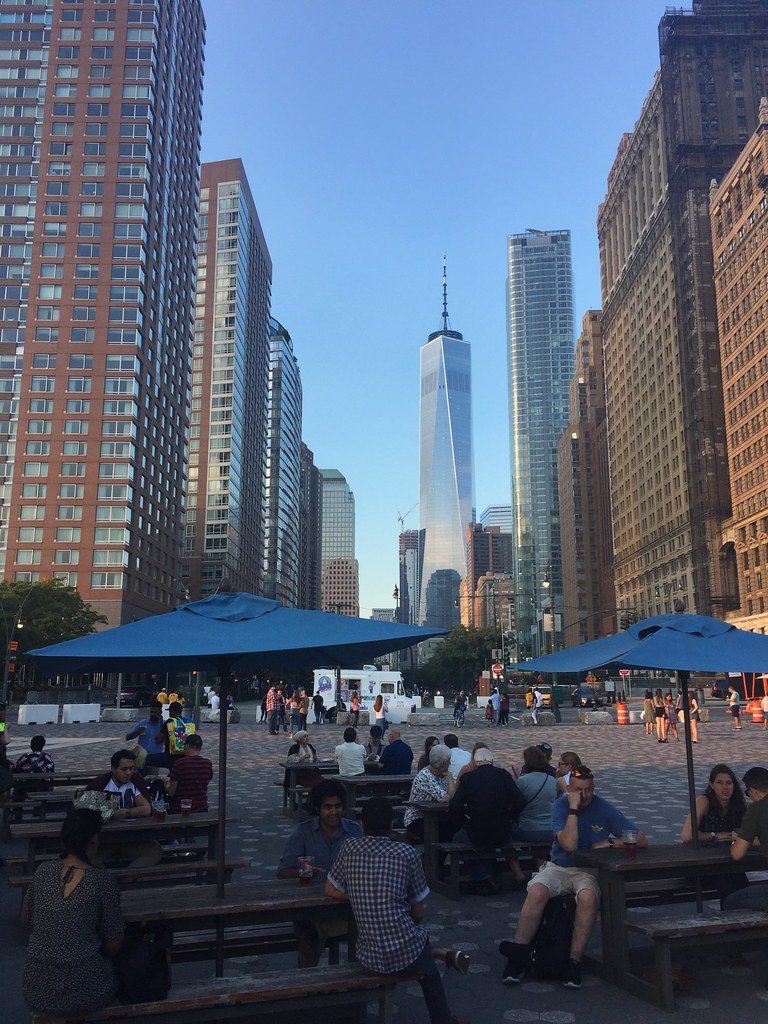 I flew from Seattle, non stop on Alaska Air and arrived at midnight in Newark on a Wednesday. It was a quick 30 minute Uber into the city at that time of night with hardly any traffic.

I had booked a deal I'd seen on Travelzoo at the Iberostar 70 Park Avenue Hotel right near Grand Central. My stay didn't get off on the best of terms as I had booked a King room but was given 2 Queens. #firstworldproblems I know. It took a bit of "discussion" with the night manager but I was rewarded with $30 in mini bar credits, a full bottle of red wine, and a move the next day into a King mini suite. 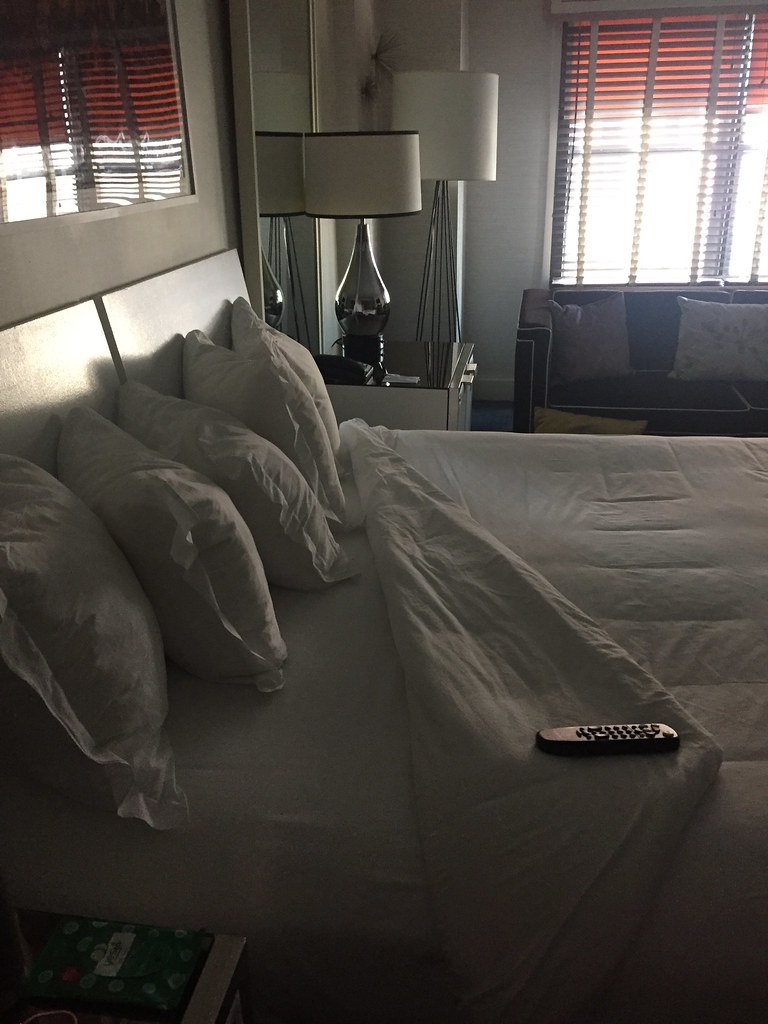 The hotel is a bit older and the bathroom could have used an update, but it was a good location for my stay, nice sized room, and my Travelzoo deal made it very affordable. Something one can rarely say about a hotel room in NYC.

My friend Aaron arrived early the next morning and we hit the ground running for our long weekend in the Big Apple. First up, lunch! The two of us had started with an insane list of bars and restaurants to check out, and since we both love eating and drinking everything and everywhere it was hard to whittle it down. I'm so glad that The Grill made the cut! 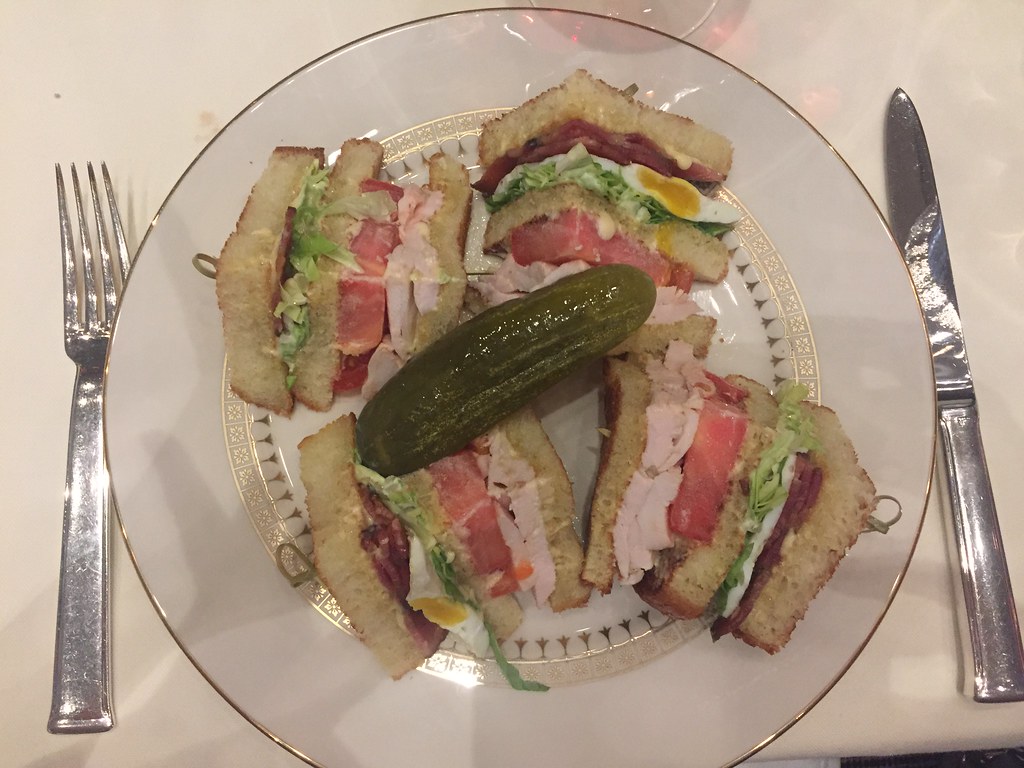 The space is super old-school opulent. White table clothes, hushed voices, oversized booths. I loved it as soon as I walked in (and found Aaron at the bar! ha!). We had champagne, a lovely Burgundy, steak tartare, and I had this bougie Club Sandwich.

Afterward, we headed over to the MOMA for an exhibit of Frank Lloyd Wright. It was a fascinating collection of about 450 drawings and models primarily for ideas that had been rejected. I mean, you know you are something special when a museum exhibits your "no, thanks." work! 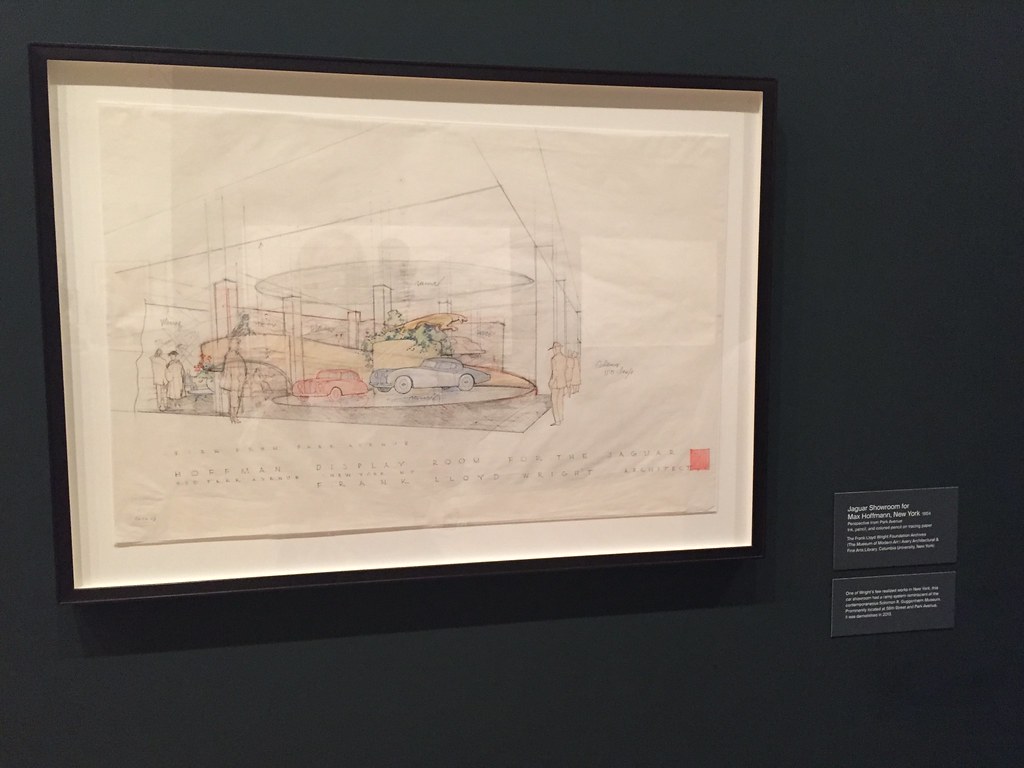 We ran around a few other rooms at the museum, showing each other some of our favorite works (Mondrian's Broadway Boogie-Woogie, Henri Rousseau's "The Dream", Miró's The Hunter, Chagall's I and the Village...) One of my absolute favorite museums, such an amazing collection!

It was time for a drink! We stopped into The Modern at the museum for a quick one and then across the street to the over-the-top Baccarat Bar for another. Next stop Brooklyn via subway to meet my friend Meg for one more round at Leyenda. Fabulous and gorgeous drinks here! 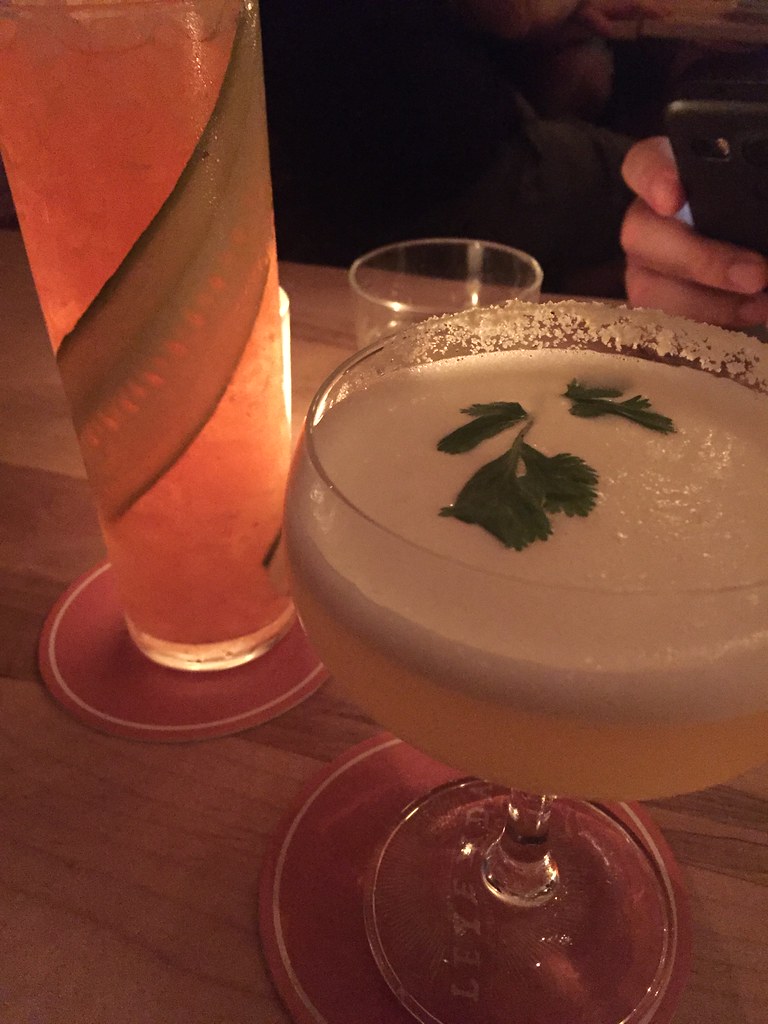 Aaron and I were making a night of it in Brooklyn. We met his friend Alana for dinner at Olmsted and had a really great meal, including the much talked about watermelon sushi! 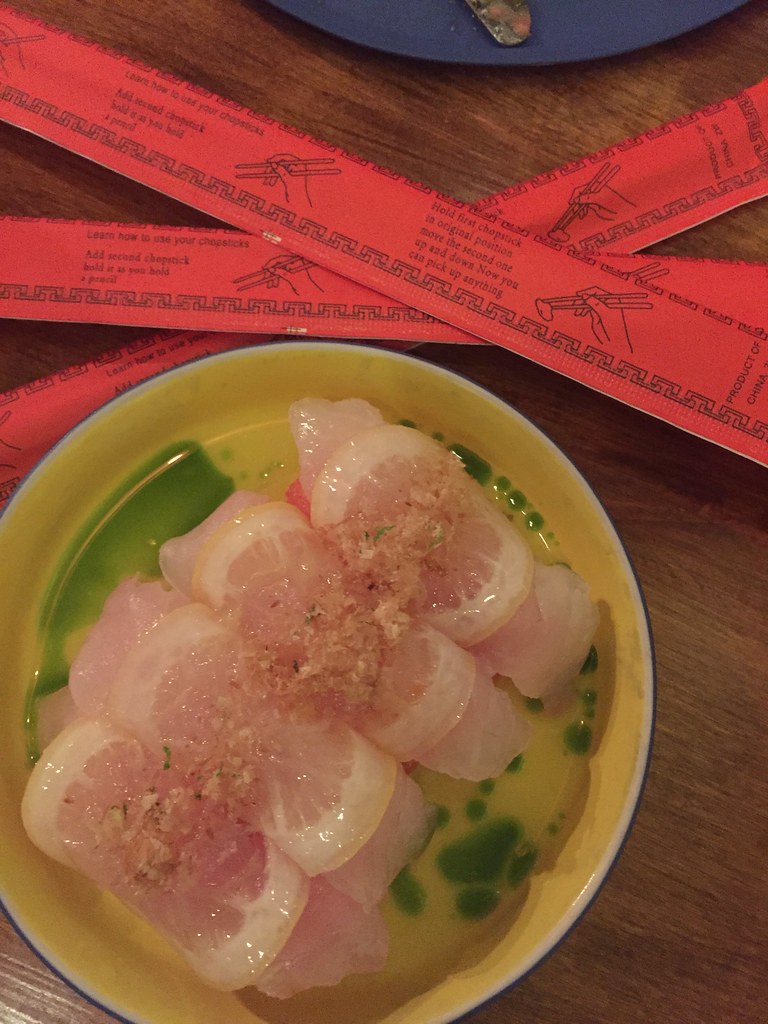 It's a great restaurant and a lot of the produce is grown in the backyard, which you can stroll around and check out. If you are headed to Brooklyn, I'd say this is a don't miss spot!

We weren't quite done with the borough yet, we went on a bit of a tiki crawl. First stop Diamond Reef followed by Super Power. Both were solid but of the three that night, Leyenda was my favorite by far.

The next morning I met Aaron at the Whitney for the Calder Hypermobility exhibit (and the reason for our trip). This was so cool! Basically, a collection of Calder mobiles that were being "activated" by a member of the museum on a published schedule. It was super fun to see these objects moving as they were designed to.
I'd never been to the Whitney before so we also went through the permanent exhibit. So many American artists that I know nothing about!
And the café offers some stunning views of NYC and surroundings so don't miss heading out on the patio if the weather is nice! 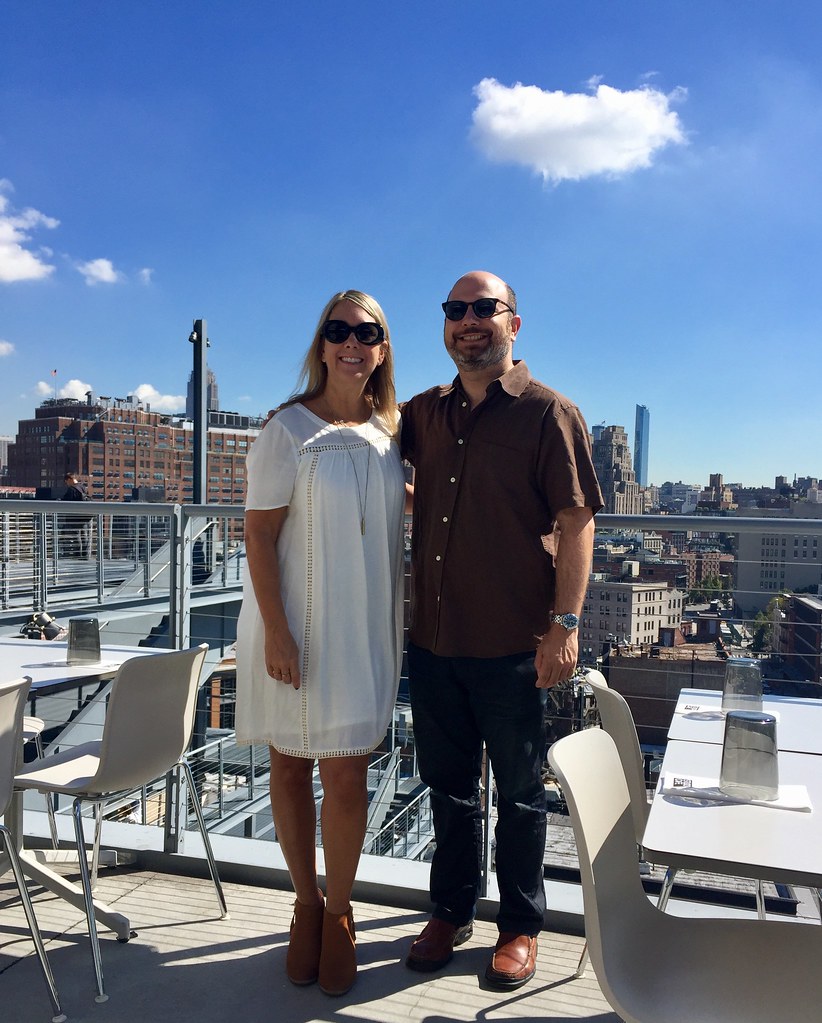 Lunch time! We had reservations at the newly opened Le Coucou and we were both very excited! We were greeted by a gorgeous entry way and led down the corridor into the restaurant. When the maitre de turned a corner I thought we were getting seated in the back of the house and was momentarily disappointed. And then he sat us at a table directly in front of the kitchen and the pass. Front row seats! 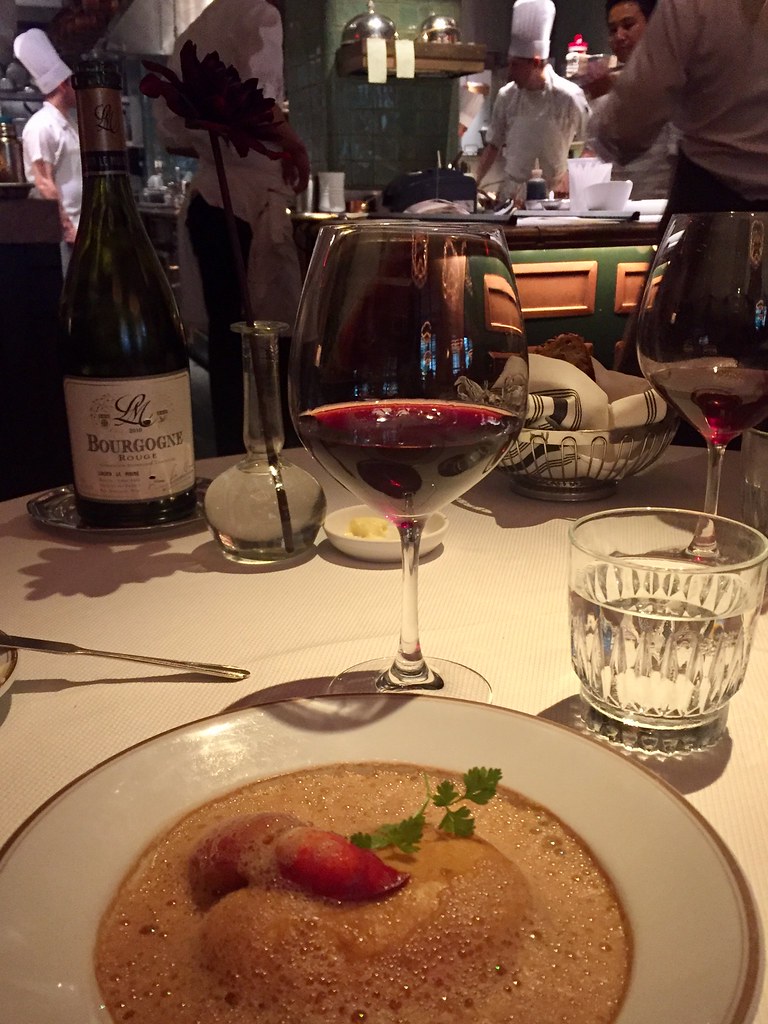 We had an amazingly decadent lunch with champagne, foie gras, tartare, Burgundy, quenelles in lobster cognac sauce, a cheese plate, dessert... everything was very good! Our service was a bit shaky (bringing our first course before wine was opened, etc.) but they were still pretty new also. I'd absolutely go back again. This space is sexy!

A quick Uber delivered us to Dante in Greenwich Village. This is a great place to do a little day drinking as they have an affinity for negronis and spritzs. Originally opened as a cafe 1915, the fun neighborhood spot recently was taken over by new owners and has earned a spot on the World's 50 Best Bars list. 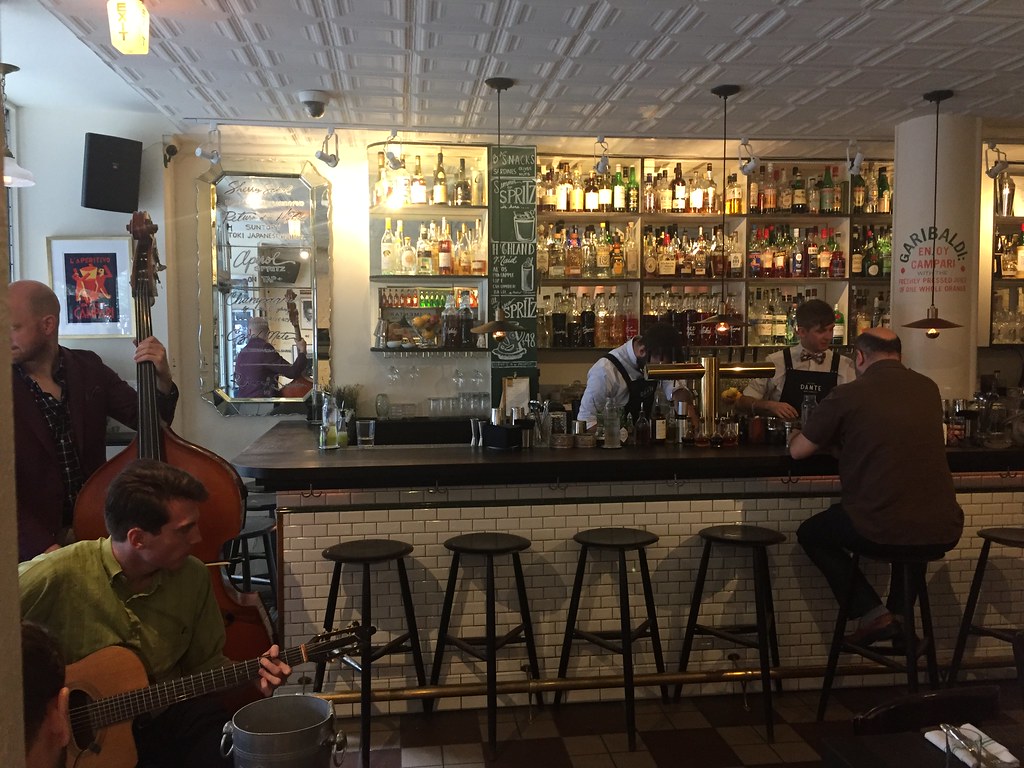 There was a string band playing on that Friday afternoon, and we enjoyed the music while chatting with the super nice bartender. A wonderful way to finish out the afternoon.

I was VERY excited for our evening plans! Aaron, some of his friends, and I were taking the train 30 miles north of the city to Blue Hill at Stone Barns Farm. 1 Michelin star, number 11 on the World's 50 Best Restaurant list, winner of a James Beard Best New Restaurant Award, showcased on the show Chef's Table... renowned chef Dan Barber had stacked up the accolades! The restaurant had been on my list for years and now we were going!

When we arrived at the train station in Terrytown we grabbed one of the taxis waiting in the lot. He quoted us $20 but when we got to the farm he argued that he never agreed to that. It was a bit of a to-do and not the way any of us wanted to start our night. I'd suggest calling an Uber or going about getting confirmation of the cost in another way. 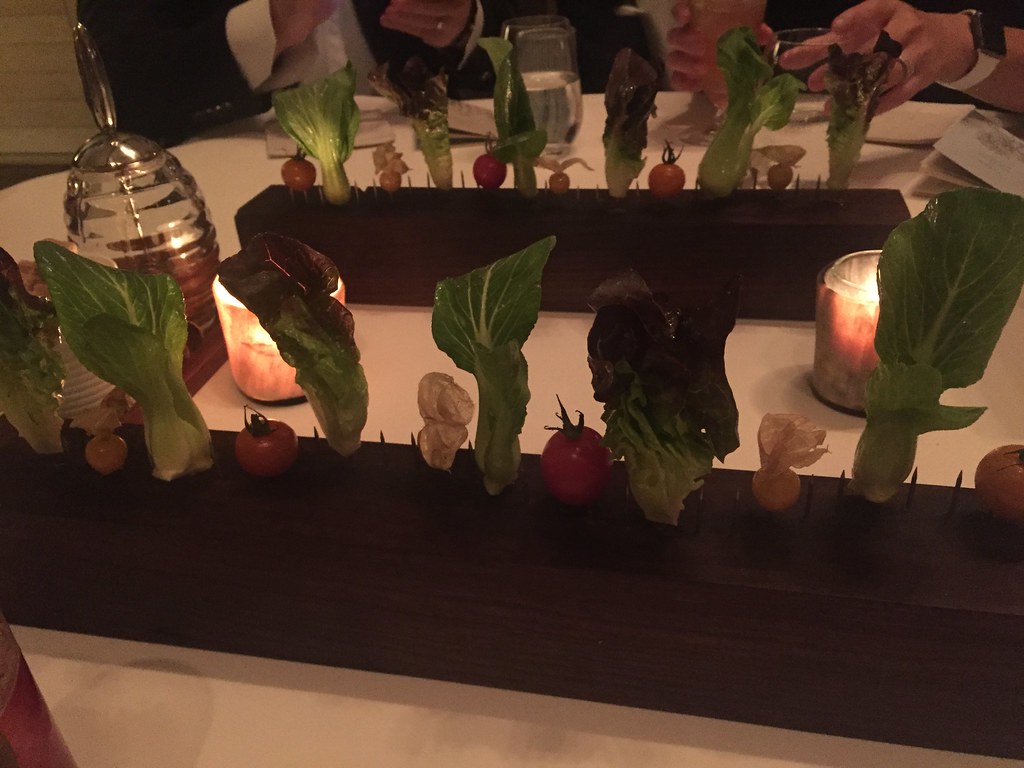 Of our table of 6, I was the only one who hadn't been before. We made our reservations online but one of my friends knows the somm so he kindly dropped her a note that we were coming in that night (you know who you are, thank you!). 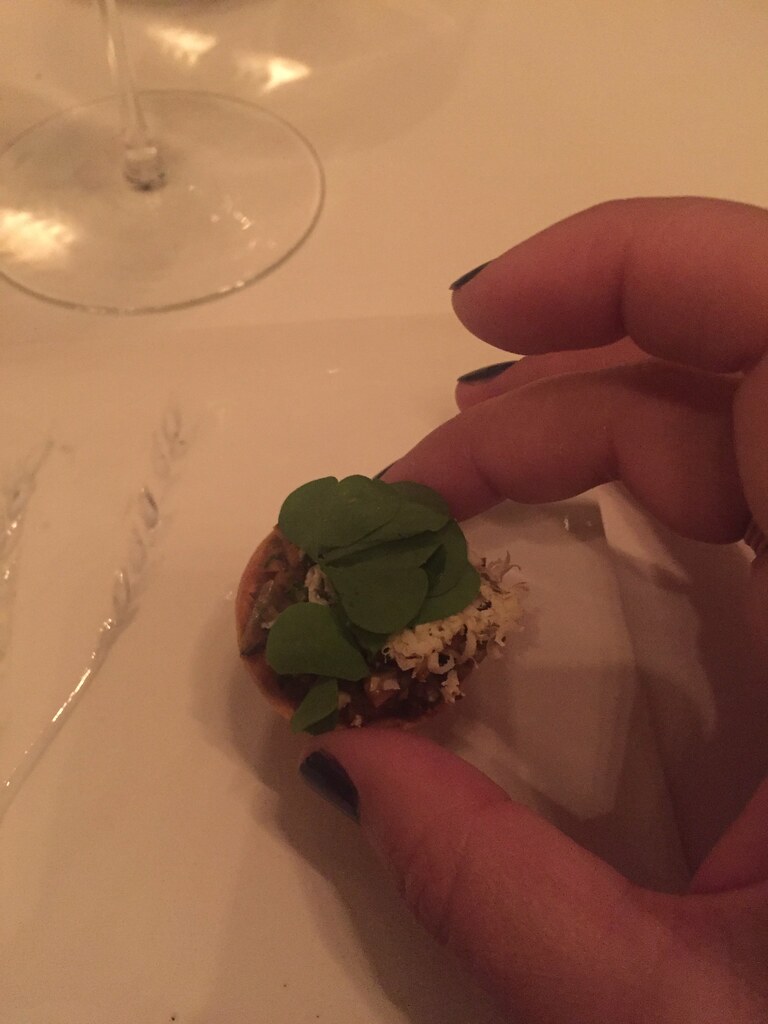 Instead of a menu we received a little booklet that listed all the things they were harvesting that month. And then the dishes started hitting the table. So many delicious and beautiful little bites. Soooo many! We also had wine pairings.

After our twelfth dish or so, we were informed that we were going to be moved into the kitchen. We all expected that we were getting a tour as a lot high-end restaurants do. But when we arrived, they had one of the prep tables set up for the 6 of us to stand around. Wine was served and they explained that our next course would take place here. WOW!!!! 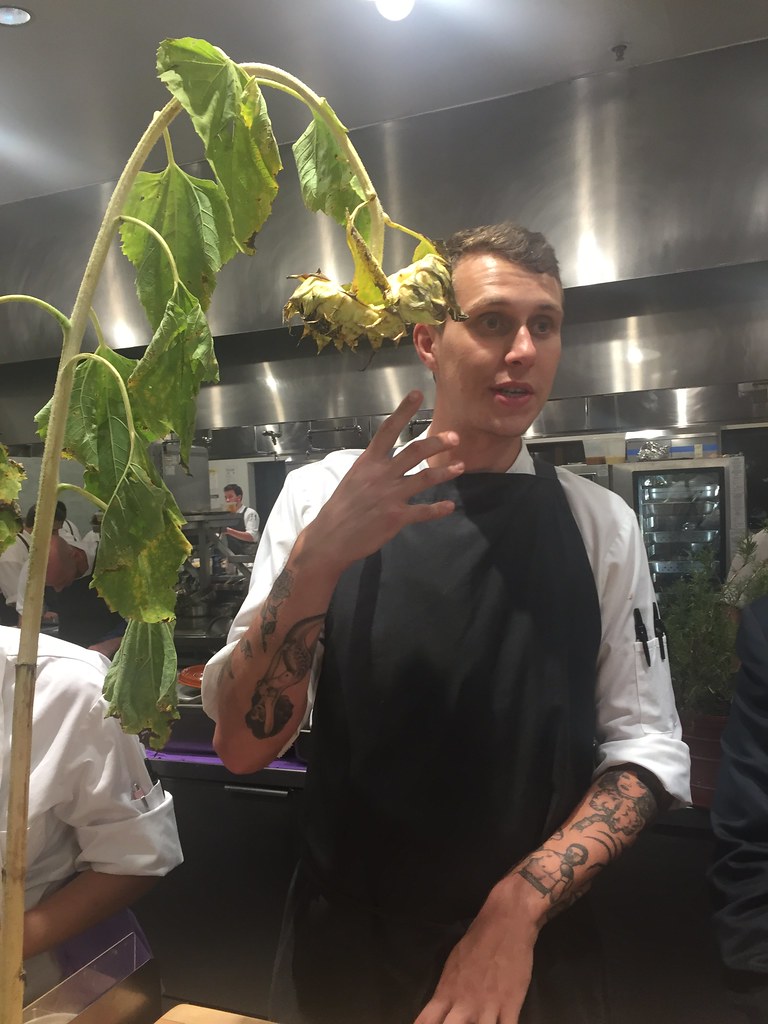 The kitchen was busy! There were stations of the most intricate plating happening and our waiter spent some time pointing out different areas to us (Chef Dan Barber was in the kitchen!). Then our course of sunflower stalk "marrow" was served. They had roasted it just as you would bone marrow, sooo interesting and good. 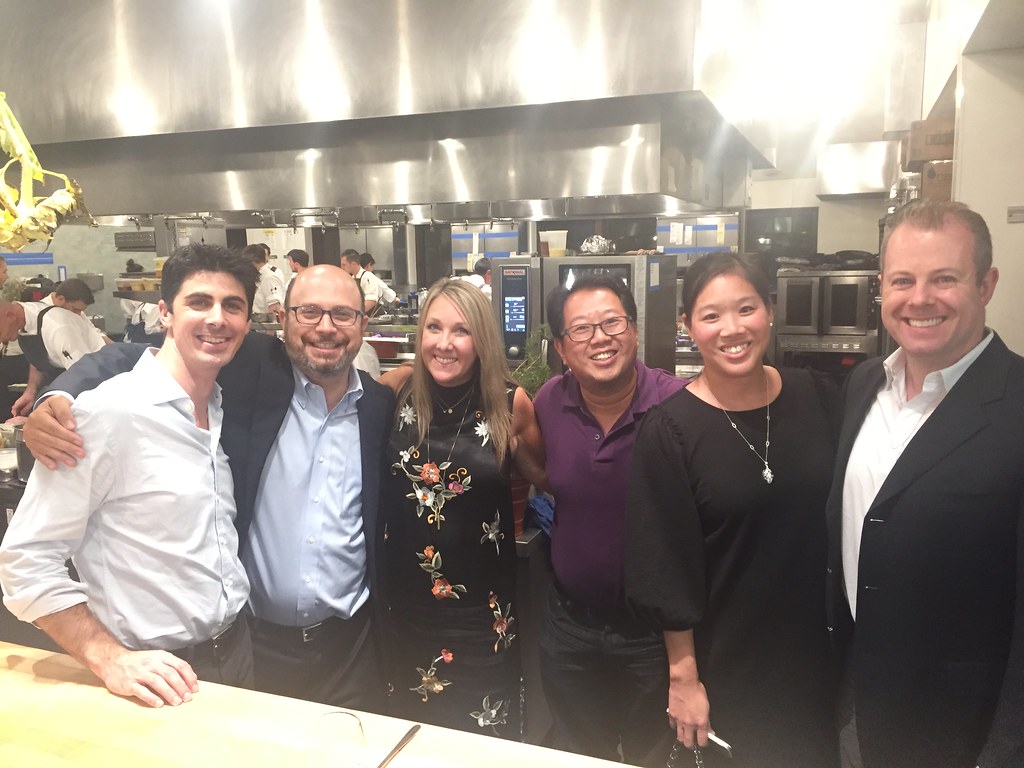 We returned back to our table for another few hours of food and wine. We never saw another table led into the kitchen and when I asked, they answered that it was just for us. Ok! It's good having friends who know people! 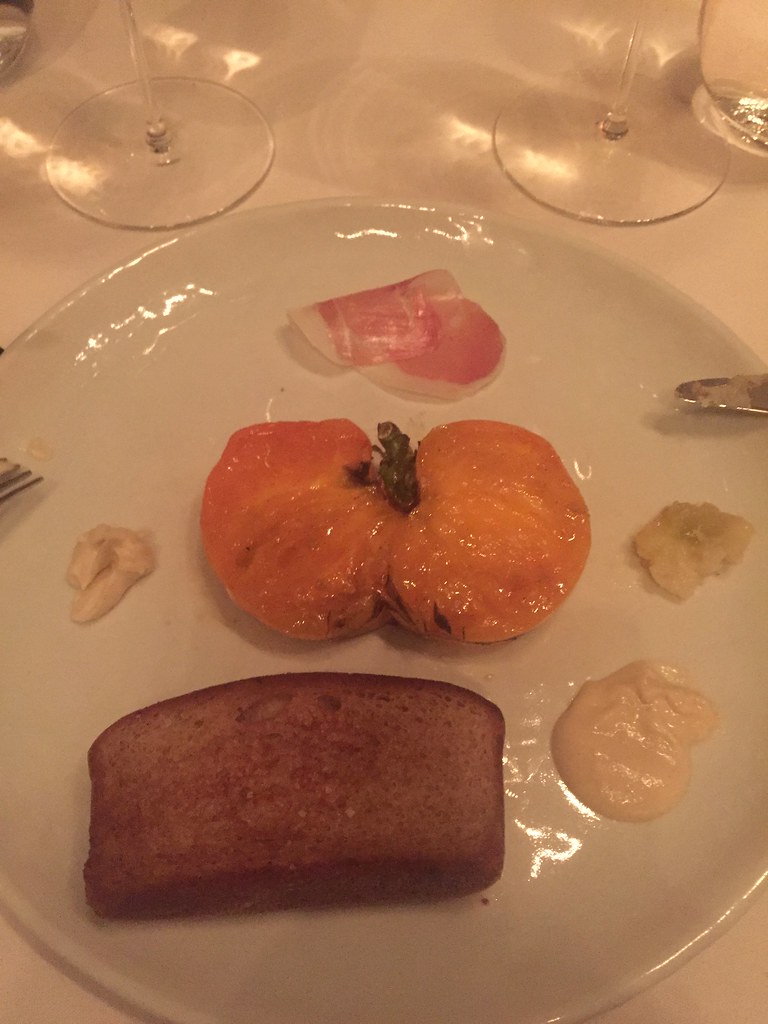 The space is absolutely beautiful in a high-end rustic way, the service is impeccable, the food is creative and delicious and right off-the-farm fresh. And it's also crazy expensive! We sat down at 8pm and left at 1am, so don't come if you are in a rush either!

We shared a Lyft back into the city which took about an hour. 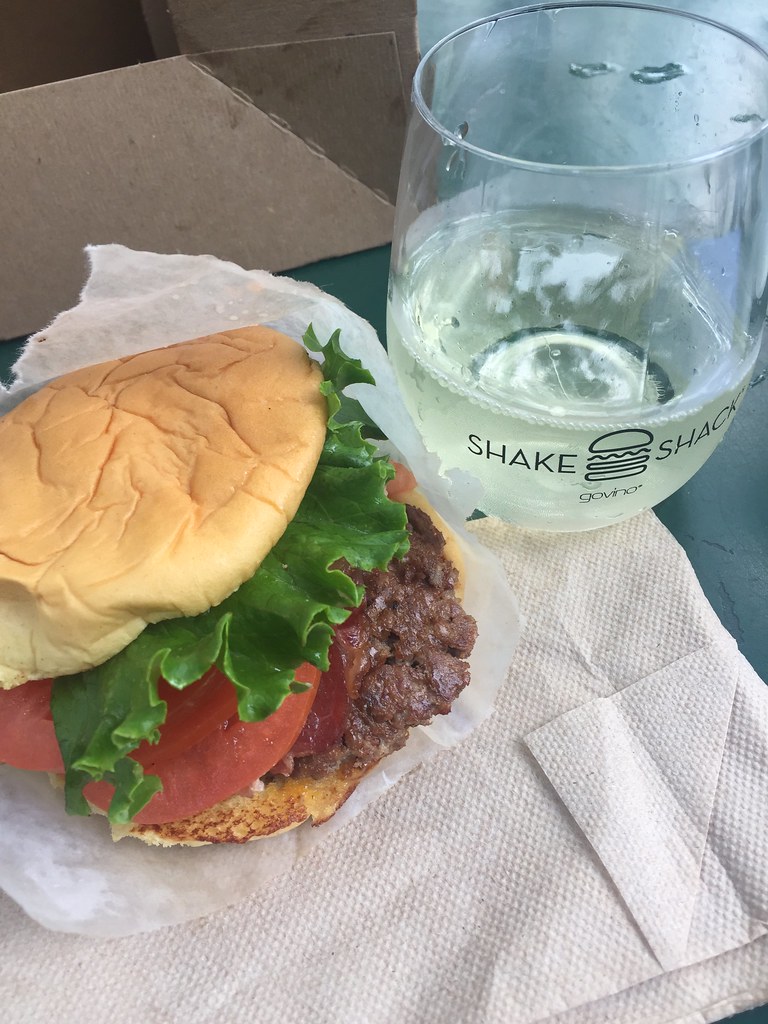 The next day I slept in and then had the afternoon to myself. It was a warm, sunny September day, perfect for a walk to Madison Square Garden, my favorite Shake Shack location. Followed by some shopping at Marimekko and ABC Home (which has so much cool stuff and is absolutely dangerous!). I caught the last bit of the market happening at Union Square and then made my way to the subway and headed to Battery Park. 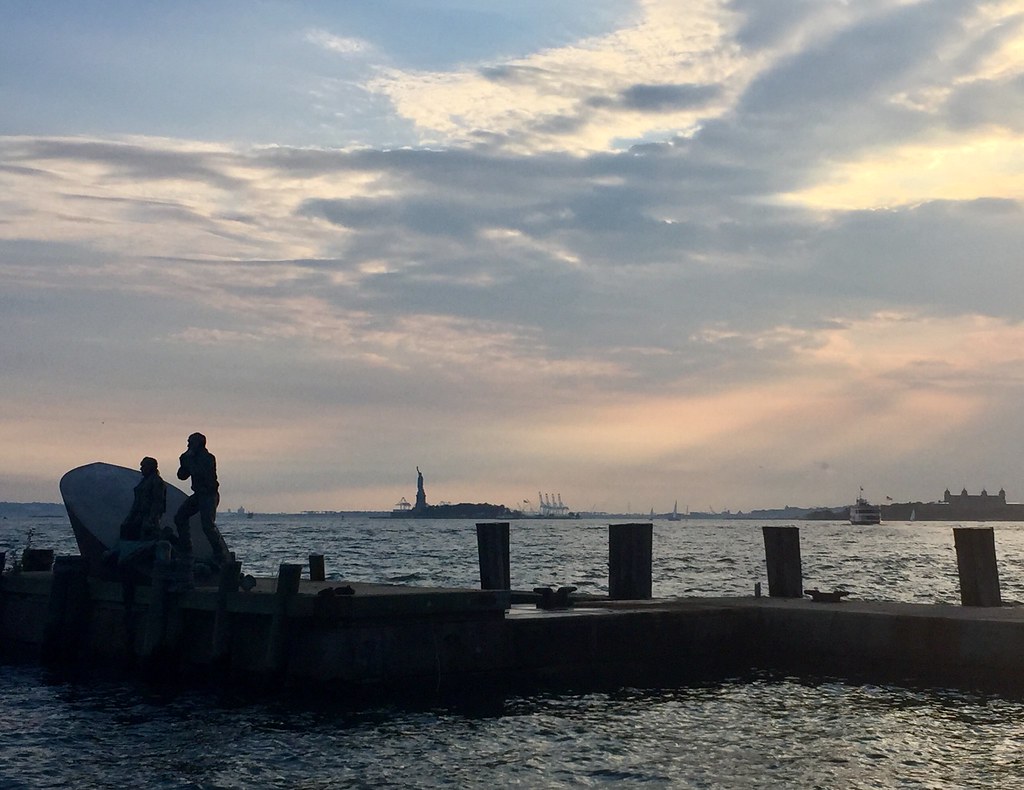 I had made reservations at the newly opened Black Tail for cocktails and was meeting Aaron, a couple of his friends, and my friend Meg for a few rounds of cocktails. The setting on Pier A is stunning, but you'll only get those views from outside so take a walk around before you head upstairs. 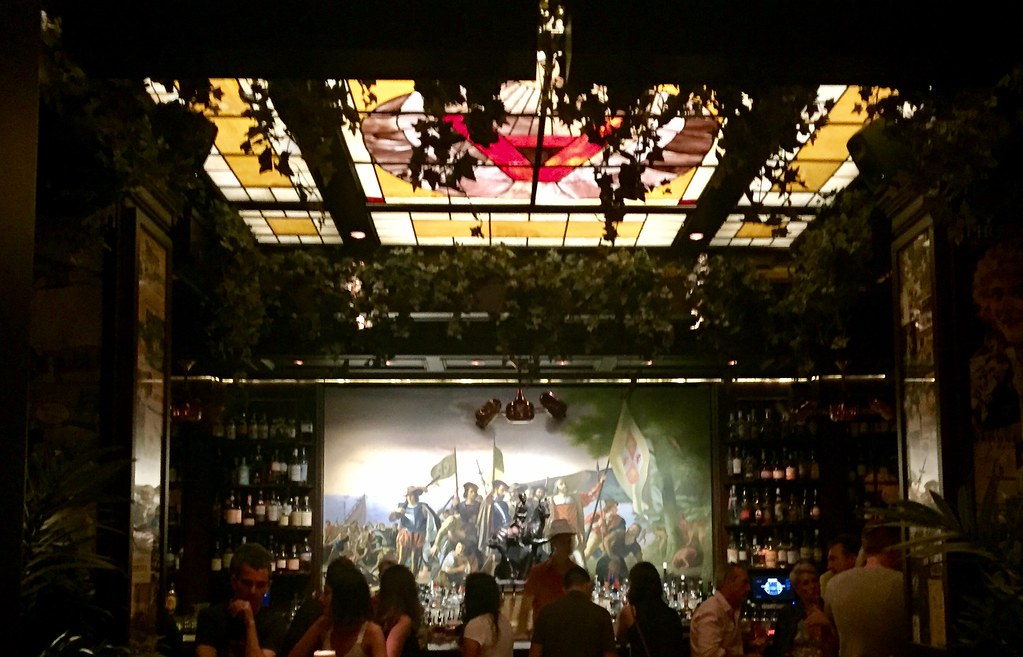 Inside Black Tail you are transported to Hemingway's Havana, Cuba. Sean Muldoon and his team (the same one's behind The Dead Rabbit) spent 8 months having the building and it's former bar and restaurant transformed into a museum of Cuban paraphernalia. But most importantly are the drinks, and they are damn fine! 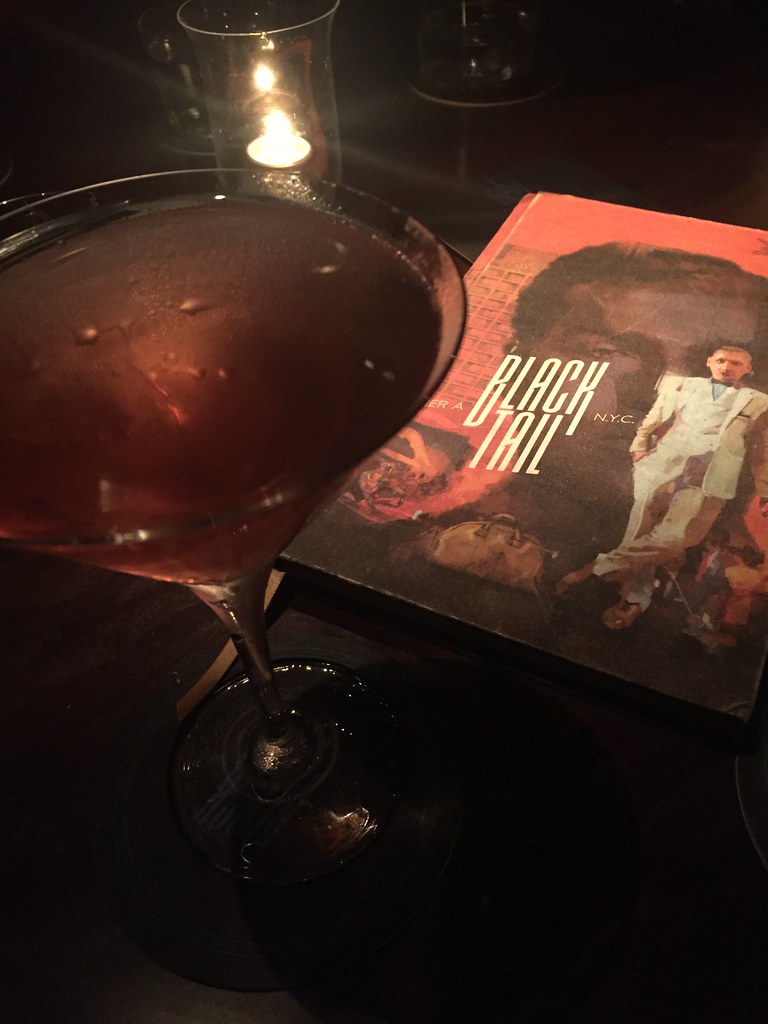 We were presented with mini frozen daiquiris while we perused the menu, which is actually a book of stories and recipes. And then we all drank a few rounds of fantastic drinks; there is a great selection of both classics and originals. I'd suggest making reservations as the doorman was turning folks down when we visited.

We split up, with Meg and I heading to the Lower East Side for dinner at Wildair. They don't take ressies here so we had a bit of a wait which we did at 10 Bells Wine Bar.

Our dinner was so delicious! And the dishes are really unique, we had a really hard time deciding on which small plates to get. The standouts for me were the pasta with squash blossoms and crispy chicken skin, and the potato pancake with uni! 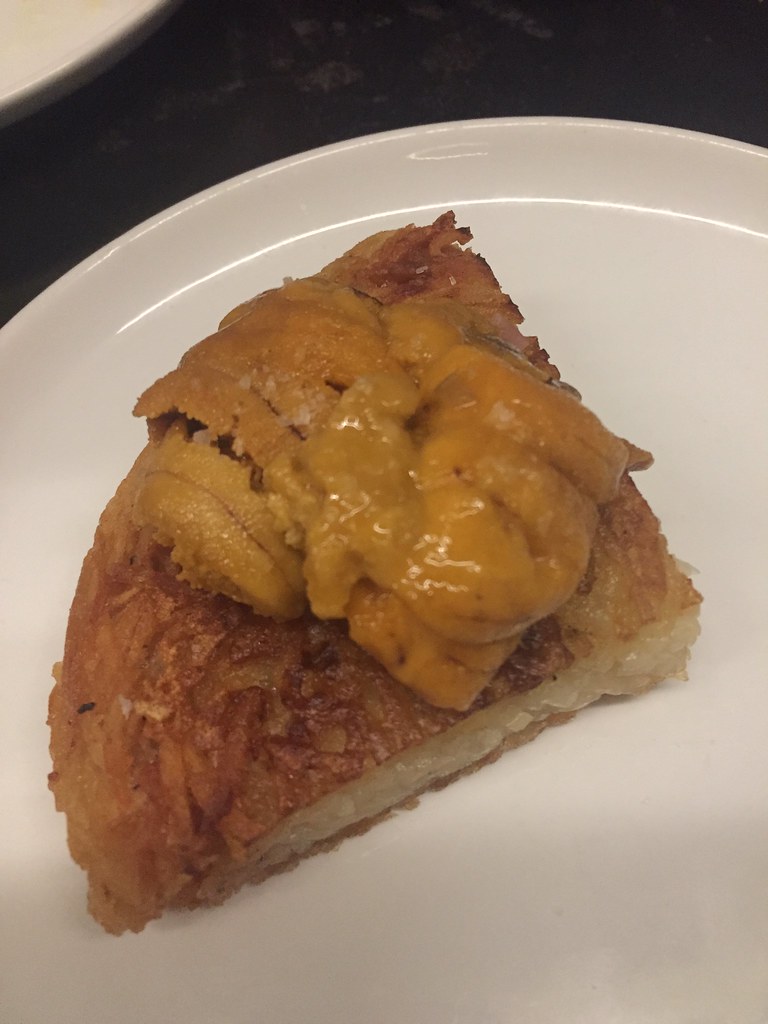 So much fun and so damn delicious! I was absolutely exhausted though so we ditched our plans for an after dinner drink and I went home and crashed!

The next morning I met Aaron and his friends at Hearth for brunch. Maybe it was because it was brunch, maybe it was because we had seriously had some amazing meals, but this place was just ok for me. Not bad in anyway, but I think there are better brunch options (does Coucou do brunch yet? haha!).

And then I was off to Newark in an Uber, which took entirely too long even though it was a seemingly quiet Sunday afternoon. Note to self, it is easier to take the train! 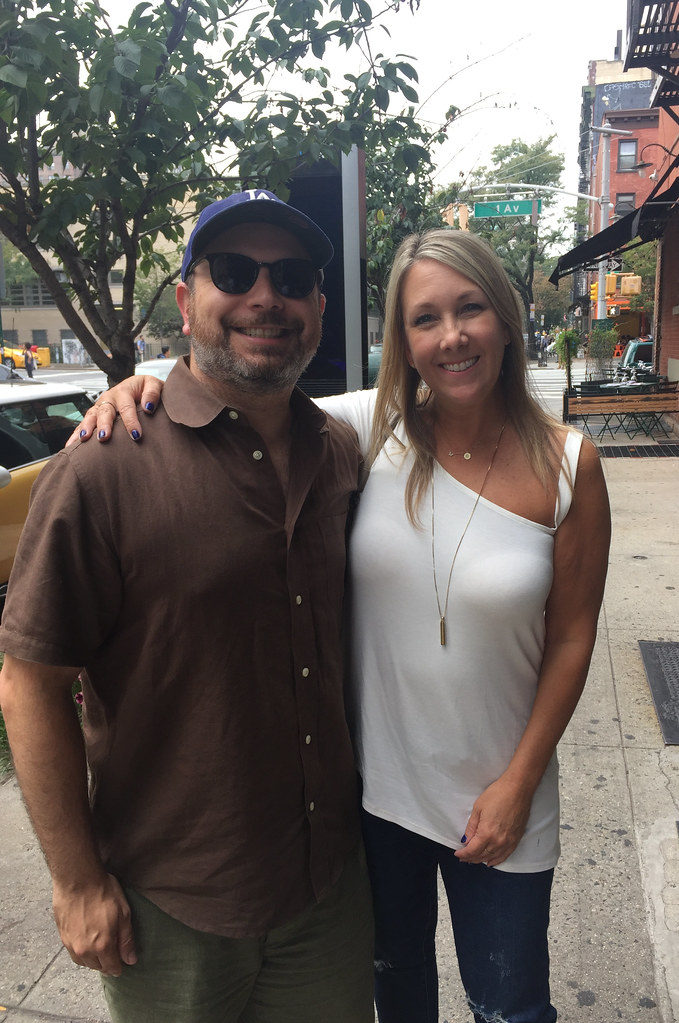