Small town Texas wouldn't generally be high on my list of places to visit but honestly, I love to explore and will go just about anywhere. So when my BFF suggested I meet her at her parent's in Mineloa for a couple days and then do a road trip to San Antonio all I needed to do was find it on a map!

I flew into Dallas Fort Worth airport, a direct flight from Seattle on Alaska Air, and was upgraded to Premium which provided me with free drinks. So far, so good!

Once I had my rental car procured it was a 1 1/2 hour drive east from Dallas to Mineloa, population under 5,000. The drive was mostly flat and uninteresting except for the amazing sunset. WOW! 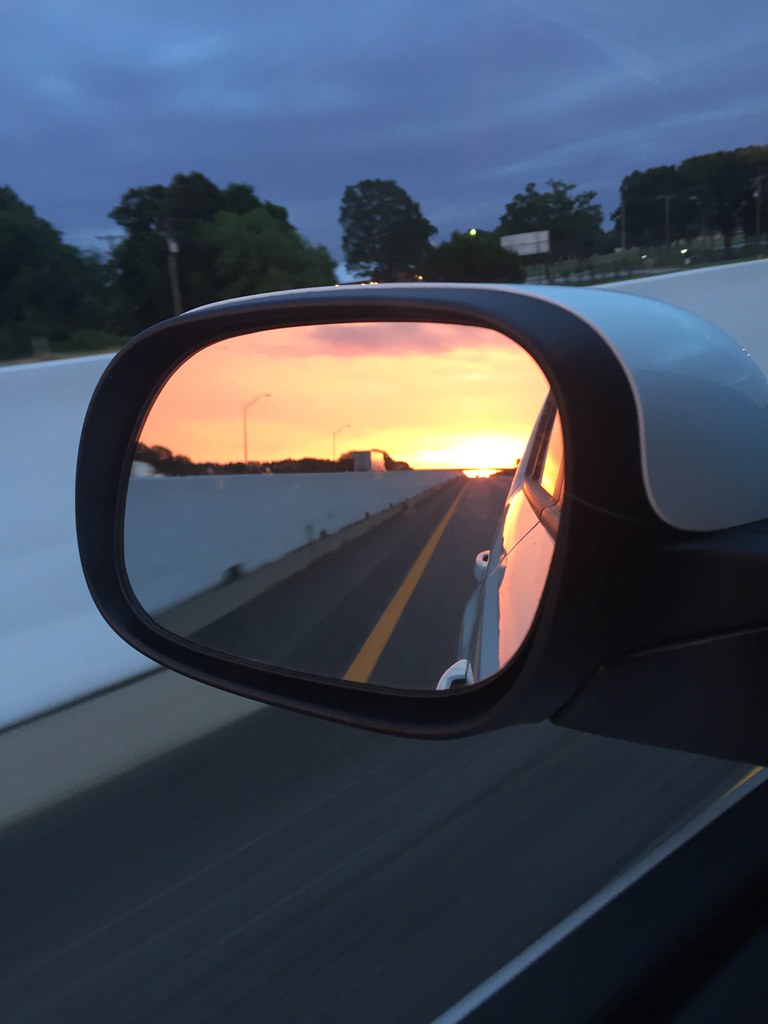 My drive took me through even smaller towns, many with boarded up main drags, like Grand Saline with just over 3,000 and Fruitvale with barely 400 occupants. When I got to Forest's parent's house it was after 9pm and we had just one dinner option still open, the Jalapeno Tree. Not the best Mexican food but beggars can't be choosers and they served us two rounds of margaritas even though that meant staying past their 10pm closing time.

I was sleeping in the comfy RV parked next to the house so we had a nightcap and caught up without worrying about waking up her parents. The next morning Forest took me to the Mineola Nature Preserve to do a little exploring. 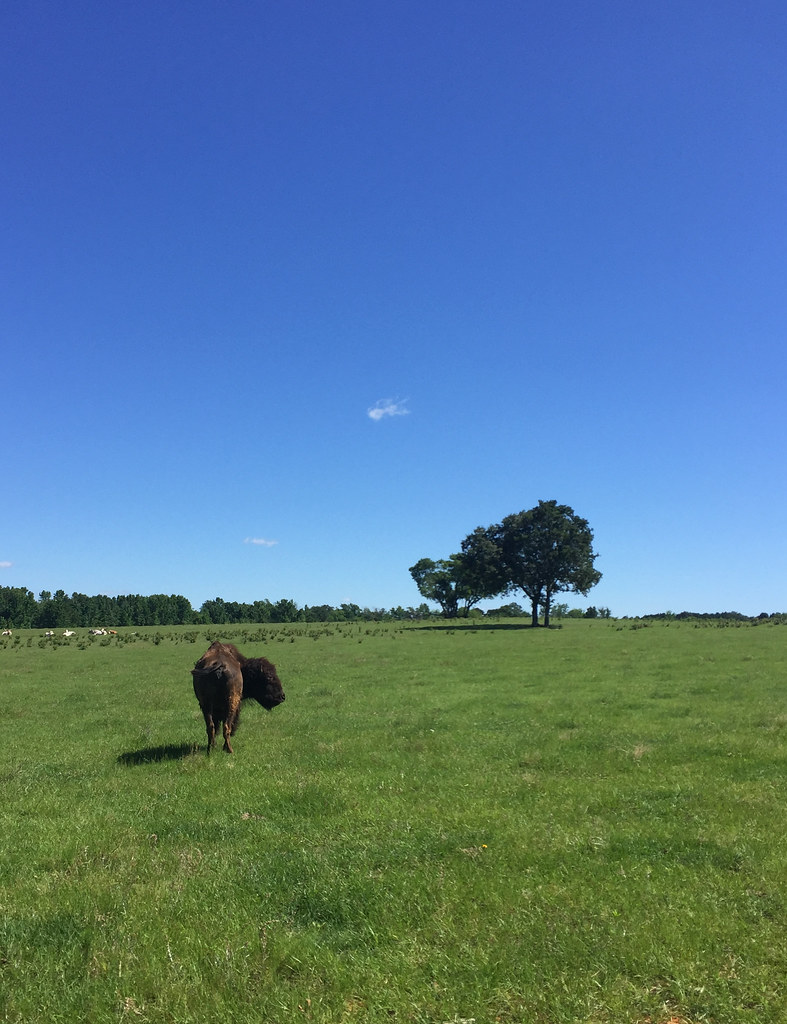 What a fantastic area! We brought her dad's archery gear and used their targets for some fun with bows and arrows (not the first time Forest and I have played Robinhood!) We also did some easy hiking and were rewarded with sights of wildflowers, ponds, buffalo, cranes, an alligator, and a turtle (which just so happened to be taking a nap very near the alligators' open jaws!). 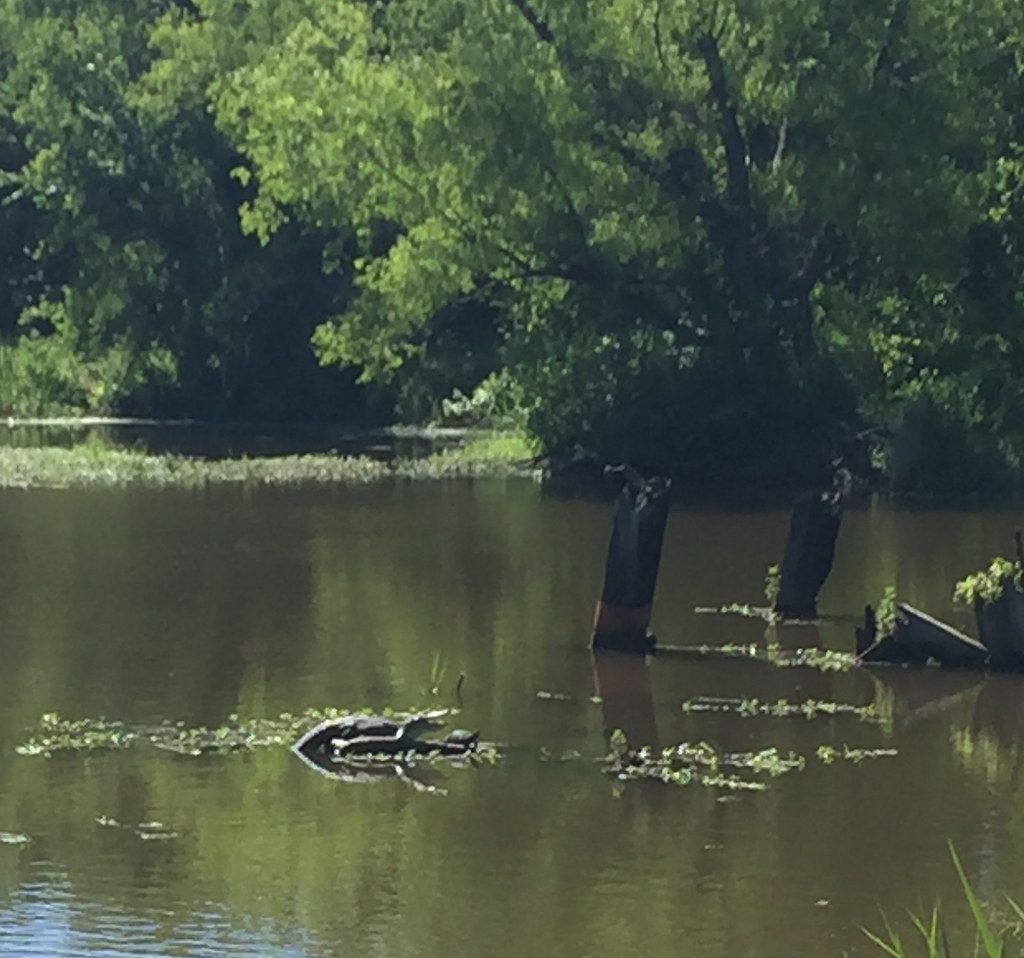 If you happen to be in Mineola I highly recommend checking out the preserve, it is gorgeous!

Lunch was with her parents at the funny little La Waffalata on Main Street. Mineola's Main Street is pretty much all antique shops so we did some shopping after and I ended up with some great vintage cocktail glasses. 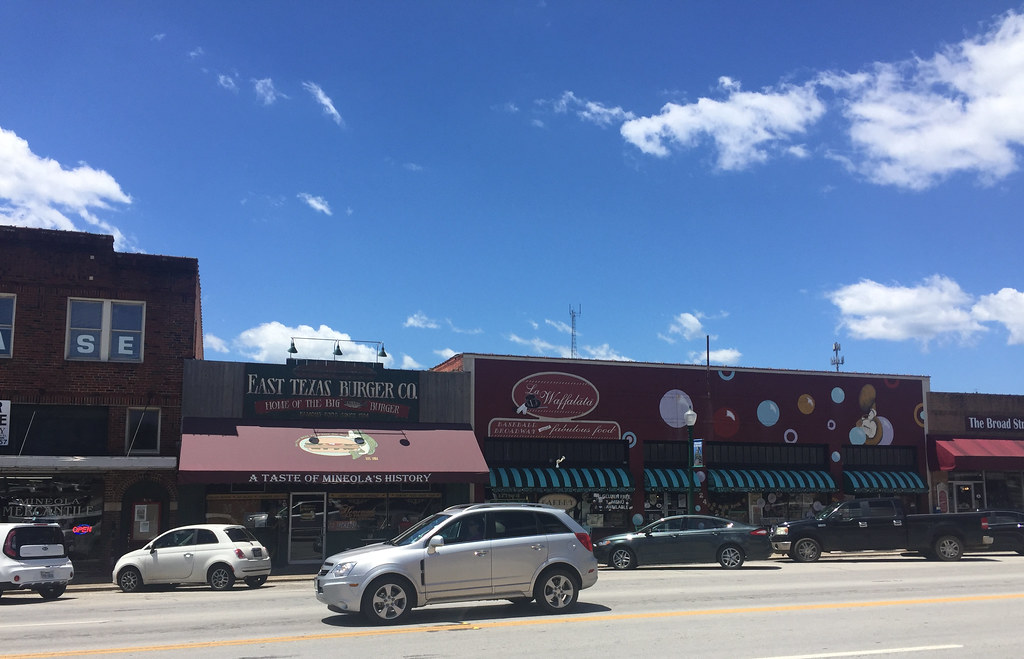 The town was so quiet! No place really to sit and grab a glass of wine in the middle of day until we stumbled upon the brand new SonnyMan's. Although they are a hot dog and beer place, they had a couple of wines by the glass. And the owner couldn't have been nicer, chatting with us, curious as to  why we were in town.

That night after grilled burgers at home, Forest and I drove to Lake Holbrook with a bottle of wine and a wine trivia game. Both the evening and the lake surroundings were beautiful! 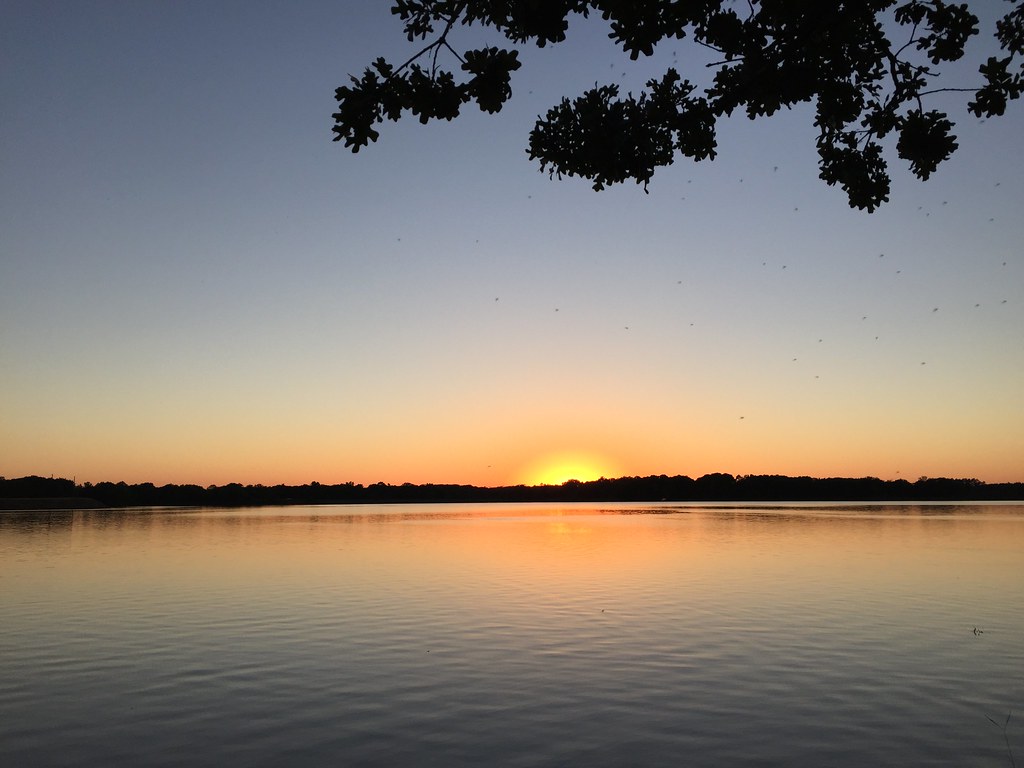 We had forgotten a wine opener so in true classy Texas style we used a rock and a stick to force the cork down. Between this move and the archery, I think I have safely secured some kick-ass MacGyver points.

The next morning we said goodbye to Forest's parents as we were heading to San Antonio for the weekend. But before we left Mineola we stopped at Grand Oaks Winery for a tasting. In East Texas. That is probably the last place I expected to find a winery. 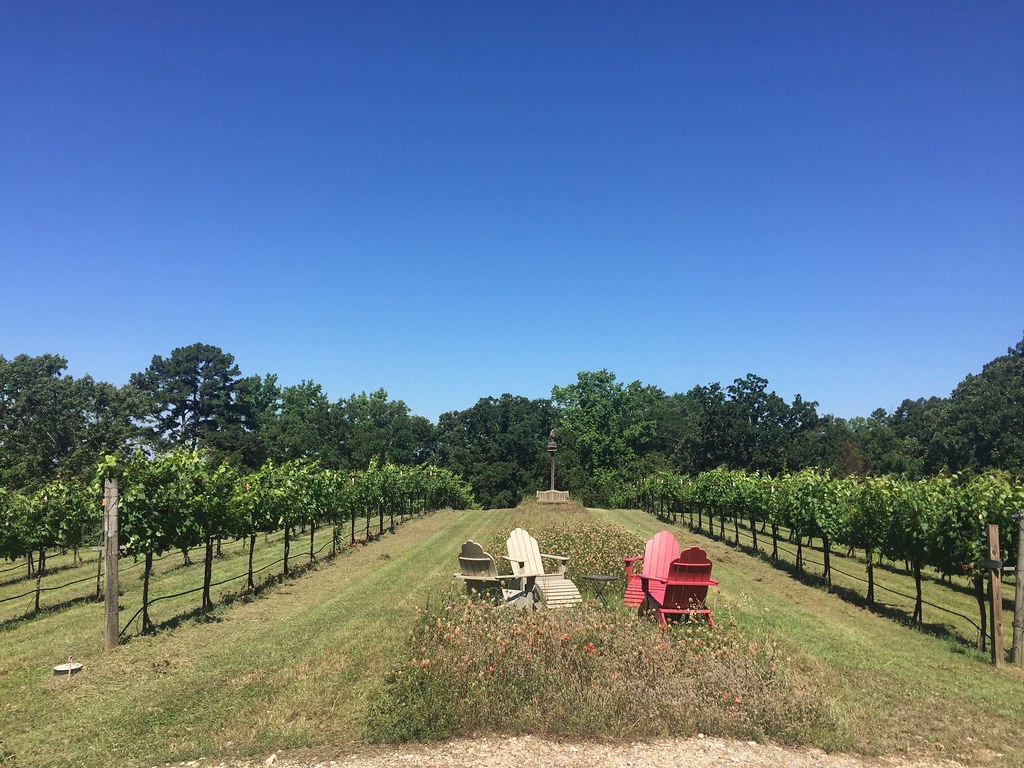 I was suspect but they had a few pretty good wines (most of the grapes are grown in Oregon which was interesting) and the grounds are really nice. We ended up enjoying a glass outside on their terrace and enjoying the lovely weather.

It was a short drive from here to the town of Tyler where we were having lunch. I had consulted the Texas Monthly's Top 50 BBQ joints about BBQ in the towns we would be passing through and Stanley's BBQ Pit made the cut. 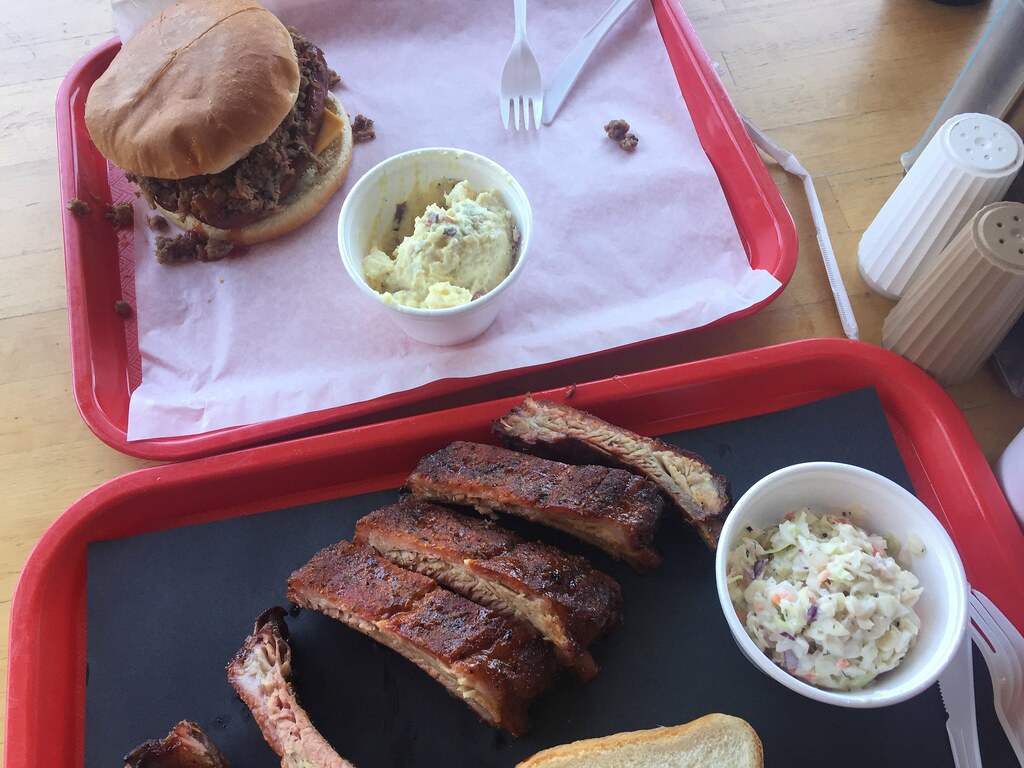 There was a line when we arrived but it moved pretty fast. Ribs for me, sides of potato salad and coleslaw were shared, and Forest had one of their sandwiches. Not only were the ribs delicious but the space was very fun. Now, this is what I was expecting from small-town Texas!

We made a quick stop to add Forest as a driver on the rental car and then we headed south for a 6 1/2 hour drive, assisted by podcasts and an audiobook.