Rio likes to party, everyone knows about Carnival and the elaborate fête they throw, but the warm up attraction for the Cariocas is New Year's Eve. Specifically the massive party that is held on Copacabana Beach.

After spending Christmas on Ipanema Beach and hiking around Iguazu Falls in Argentina, I flew back to Rio de Janeiro with my friends on the night of December 30th. We landed at the airport around 8:30pm and the place was packed! The queues for the prepaid cabs snaked the length of the arrivals terminal. Luckily it moved pretty quickly and soon we were on our way to our Airbnb in Zona Sul. It seemed like a lot of people had the same idea as us, flying in the night before the big party, as traffic was a nightmare. 1 1/2 hours later we arrived at our building, found our way up to the apartment, and were greeted by our host who spoke little English but was quick with Google Translator! 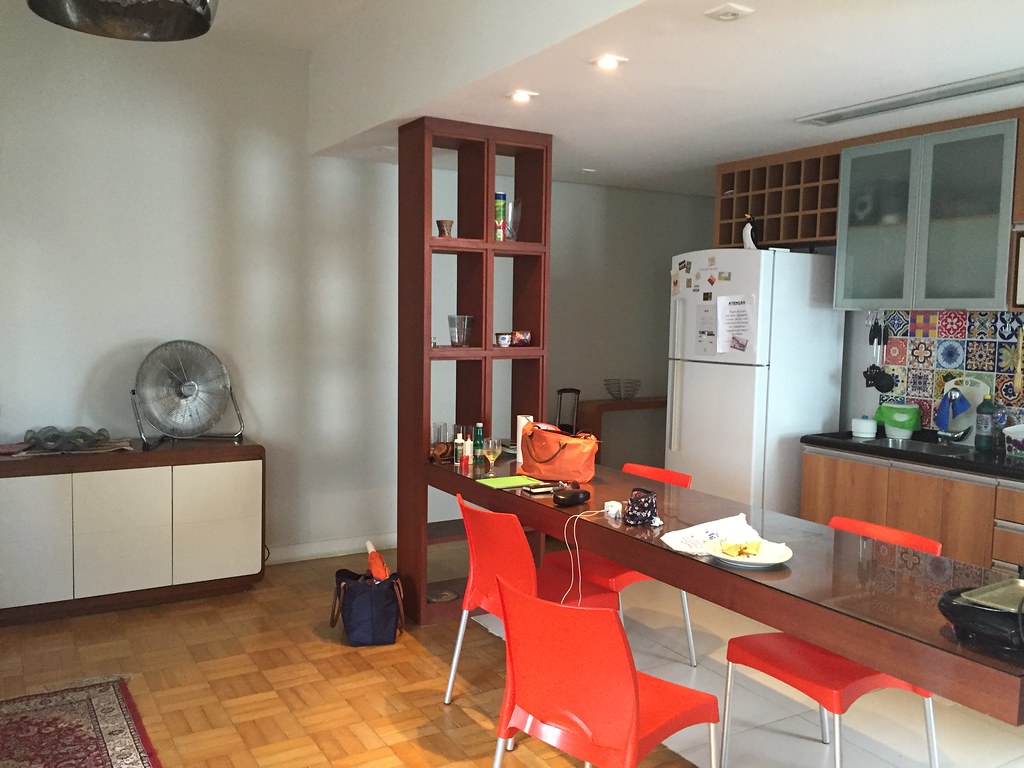 We had a spacious 3 bedroom (all with air conditioning), 2 bathroom apartment just 3 blocks off of Copacabana Beach. Perfect!

It was late and we were tired, so we headed down the street to pick up an assortment of pastries stuffed with meat, cheese, and veggies and brought them back to the apartment for dinner before crashing early. 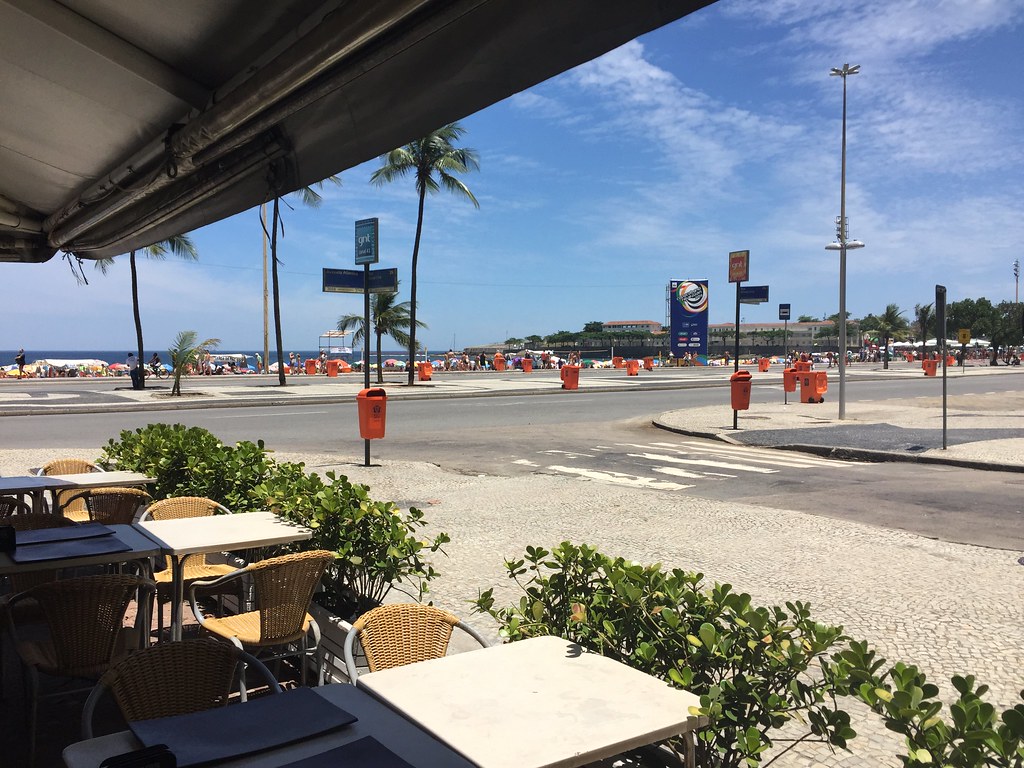 The next day was sunny and hot! We decided to have lunch across from the beach at Garota (they have one in Ipanema that we ate at also); some chilled white wine, two orders of pão de queijo (cheese bread/puffs), and a few excellent fish dishes made for a wonderful lunch. We ordered too much food, not realizing that the entrees were family style portions. No worries, they boxed up our leftovers and we took them back to the apartment. 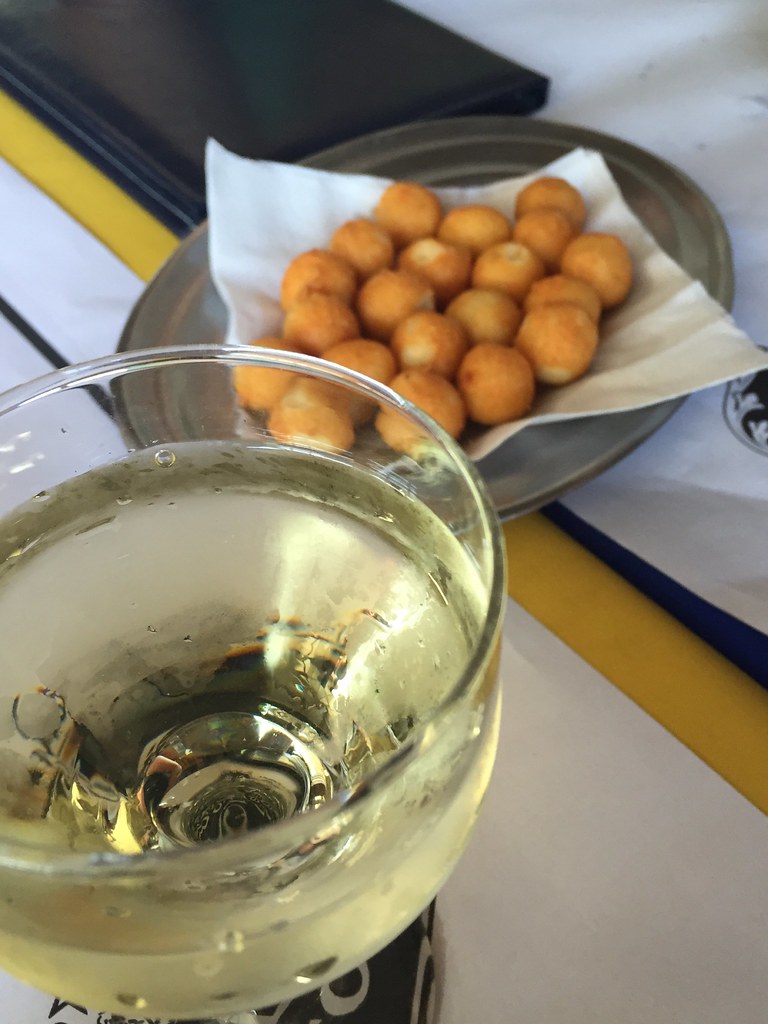 The rest of the afternoon was spent shopping. First for groceries, along with what seemed like the rest of Rio. Everyone was stocking up for that evening's parties and the next day's hangovers. We were doing the same. One thing is that you can buy hard liquor in most grocery stores, unfortunately we only saw vodka, cachaca, and bad whiskey in most. The lines were insane! One of us stood in line while the others shopped and even then we still waited for 30 minutes! 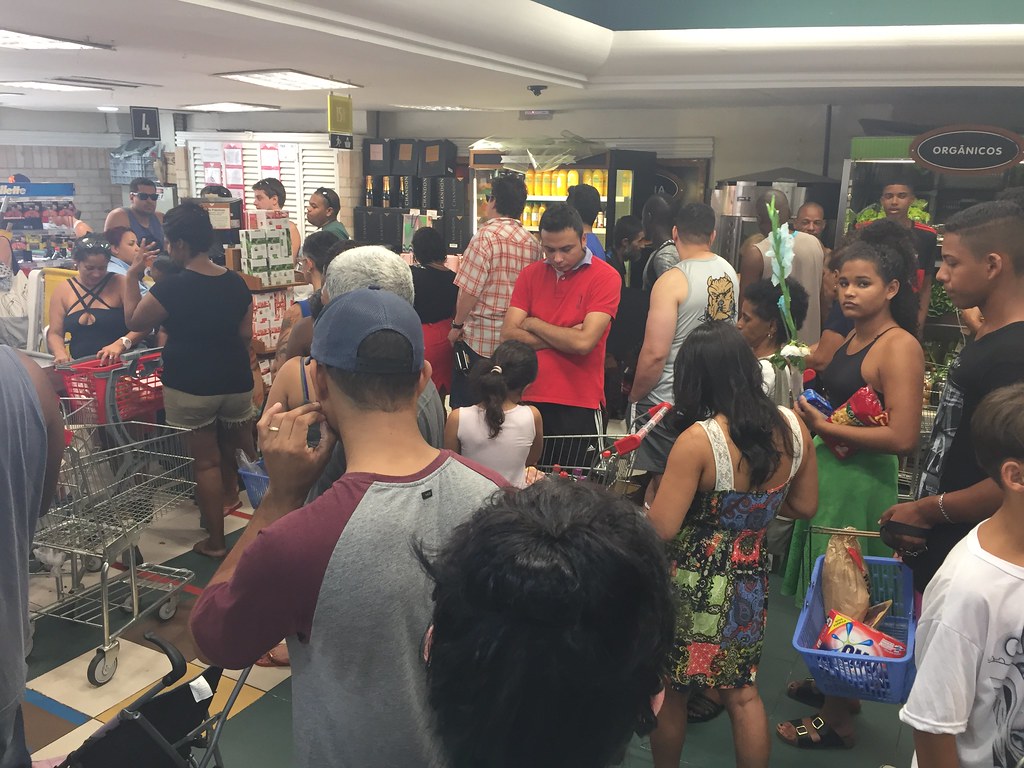 Next up was Havianna shopping. Haviannas are made in Brazil and everyone wears them everywhere. They are also sold everywhere; newsstands, grocery stores, actual Havianna stores, as well as numerous flip flop shops. And the prices are pretty similar with the exception of some special designs sold exclusively at the Havianna store.  We found a shop called MG Bazar (at R. Silva Castro, 65) that had a really good selection, some good sales, and a little lower prices on certain styles. Havianna shopping completed!

It was late afternoon now and the streets were filling up. People spilled out onto the sidewalk outside of bars, many getting a head start on the night. The city had put up extra garbage cans on every single corner as well. We stopped in a few more shops for last minute items and then went in search of ice.

All day we had seen guys on bikes selling huge bags of ice, it isn't sold in any of the grocery stores we went to, but when we sent Thibault out to look for the bicyclists he didn't come across any. We asked the doorman at our apartment and he pointed us just 2 blocks down the street. There was a small queue and the only thing they sold were 10 pound bags or more, for $10. So we paid for our bag of ice and Thibault hauled it home. 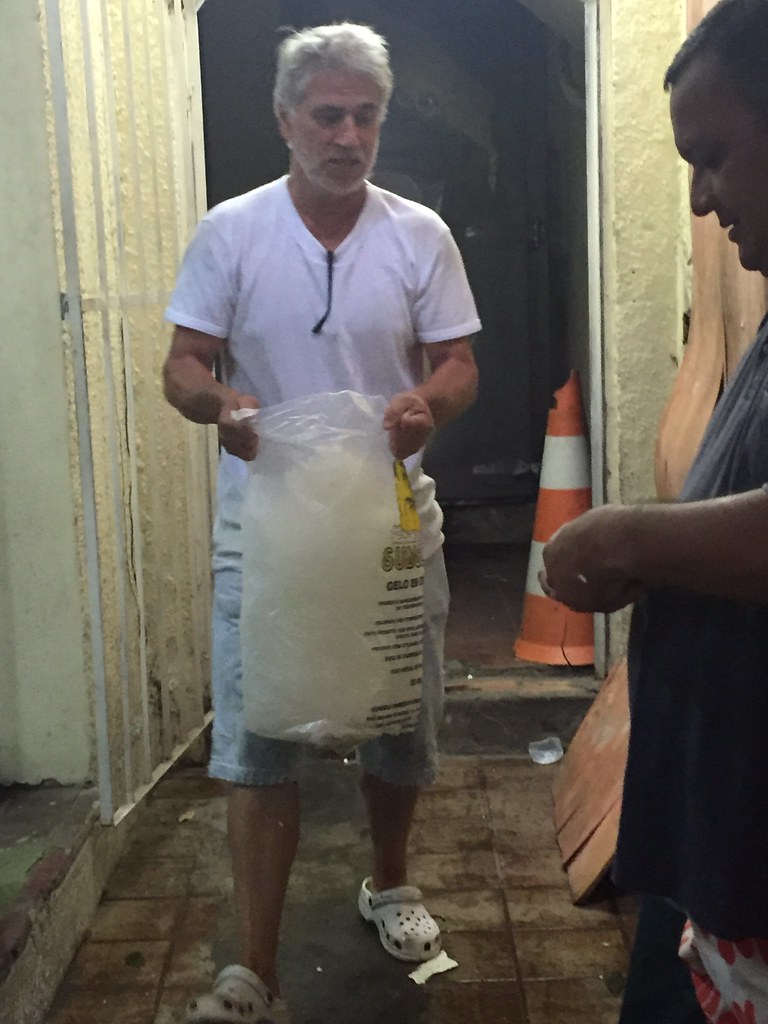 Unfortunately once home we saw that it looked dirty; we googled all the words on the bag only to find out it was not for consumption! We didn't need a bag of bottle chillers, we needed good ice to stir cocktails. Fail.

We filled up the ice cube treys with bottled water, opened a nice bottle of bubbles and had a Skype call with our friends Matt and Vio who are sometimes travelers on the NYE trip. Then we played Exploding Kittens while fireworks started to explode outside. There was a favela on the hill behind our apartment building and the parties there were getting in full swing. You could also hear the sounds of people starting to party down near the beach, as well as see and hear a huge helicopter keeping an eye on things. I have to admit that I felt a tad bit of nervousness mixed with excitement, 2 million people were expected on the beach that night. Seattle has a population of 680,000. So there's that! 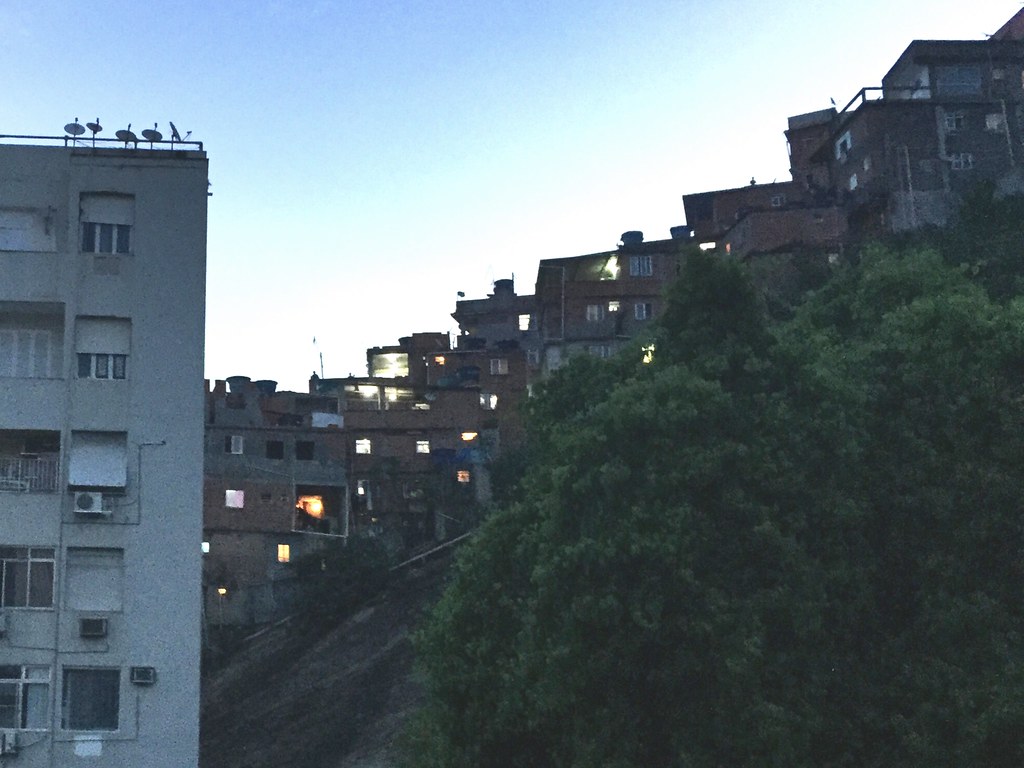 Around 10pm we headed off to Copacabana, all dressed in white as is tradition, with a backpack of champagne and fun plastic new year's flutes I had found earlier. The streets will packed with people, also all dressed in white, streaming towards Copacabana Beach. We were a little alarmed to find a firetruck in front of our apartment, apparently there had been a fire in the building next to ours, luckily they had put it out. 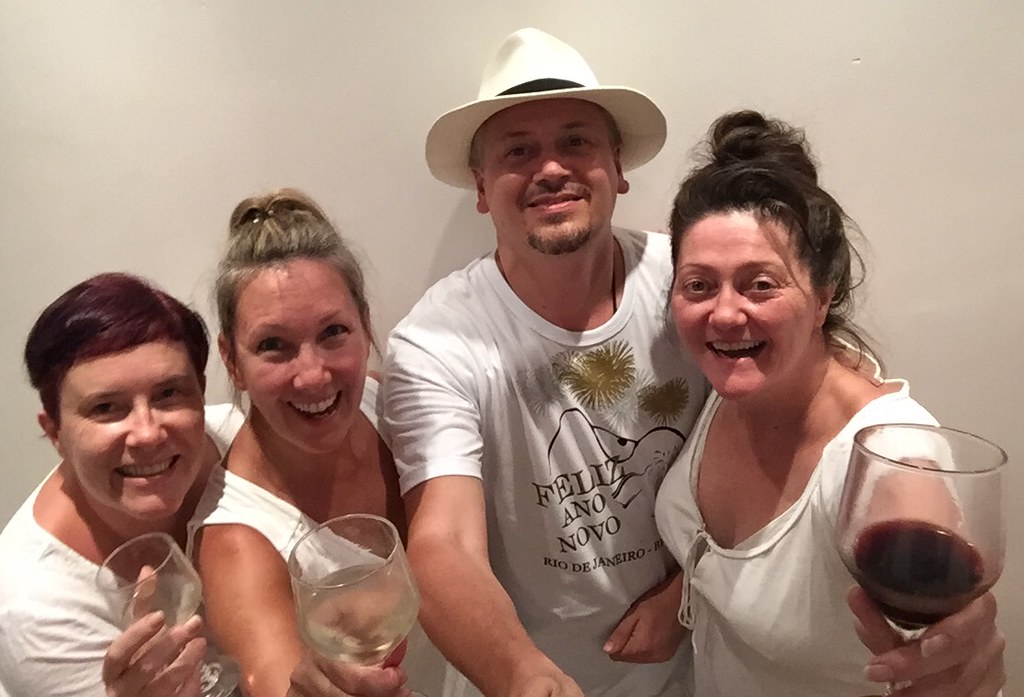 The beach was a solid mass of white! Many people had added accent colors to attract different kinds of luck. The one we saw the most was yellow which is for money. We were at the west end and could see the full stretch of the beach. There were a few big stages set up with live music, and the beach vendors who normally ran their stands only during the day, were busy setting up beach chairs and making caipirinhas. Out in the bay, cruise ships were lined up for the big show. People sat on the sand or in chairs, some had lit candles and had dug out little shrine areas in offering to the goddess Iemanja. 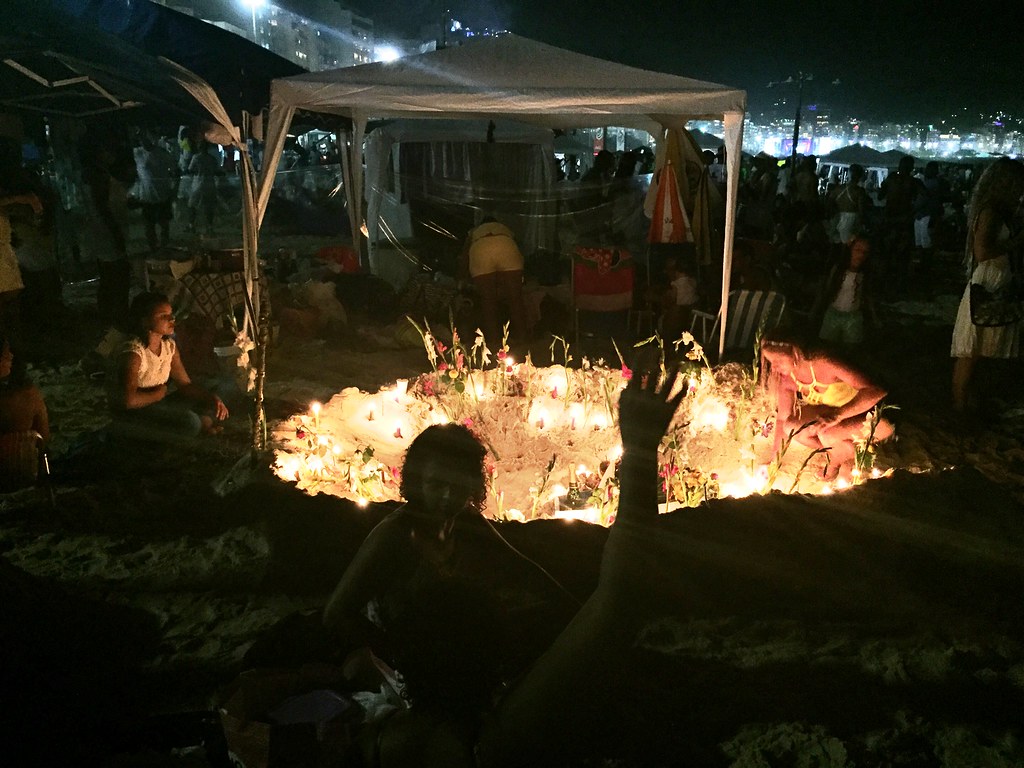 Once we had chairs and cocktails acquired, I think we spent about $10 each, Thibault and I walked through the crowds towards one of the big stages to check out the music. Along the way we passed people selling all sorts of drinks, snacks, champagne, and of course bikinis! The area around the stage was packed! Everyone singing, dancing and having a great time. Thibault took this fantastic panorama photo.

It took us a while to get back to our chairs, in fact we only had time for one more round of caipirinhas before it was time to break out the bubbles. 10, 9, 8, 7... Feliz Ano Novo! 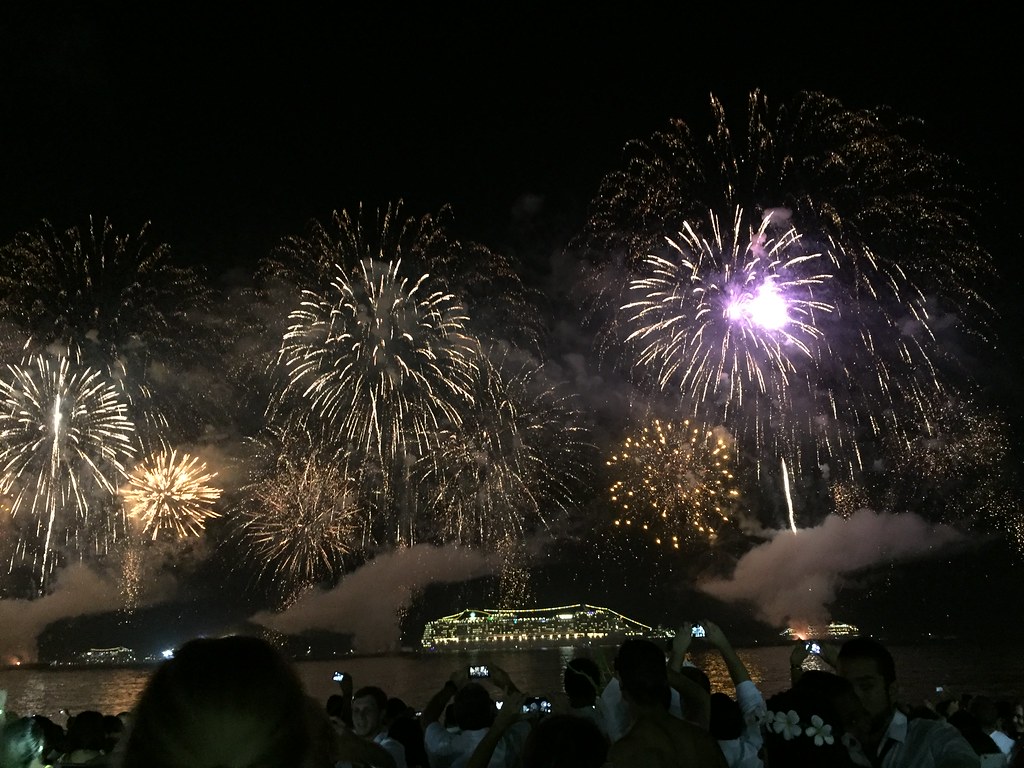 The fireworks exploded, the barges out in the bay spread out over the almost 2 1/2 mile stretch of the beach front. They weren't unique in their height or their style but I had never seen such a spread out show before. I loved it!

By the end a haze was sitting right on top of the cruise ships, the night was still and hot. People were having a great time, continuing to party, some jumping waves in the surf, and things seemed calm and safe. Hard to believe with that many people, but we didn't have a single problem nor did we ever feel unsafe. 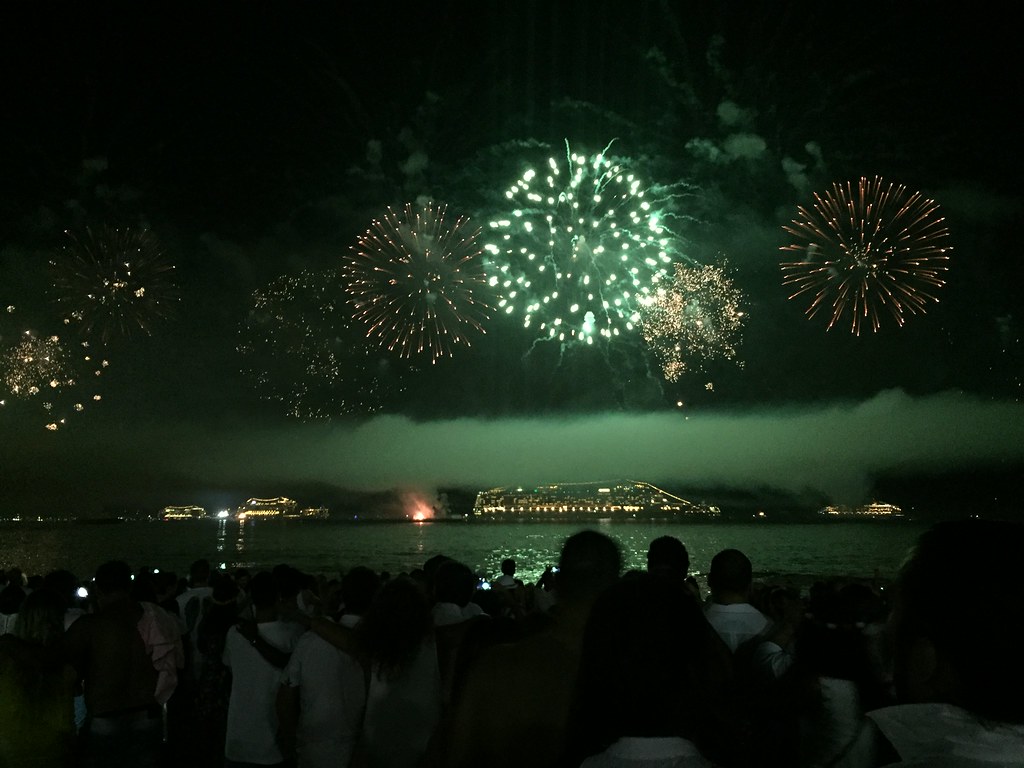 We headed back to our apartment, mixed up some martinis with our now frozen ice, and looked forward to a new year; out with the old, in with the new 2016! 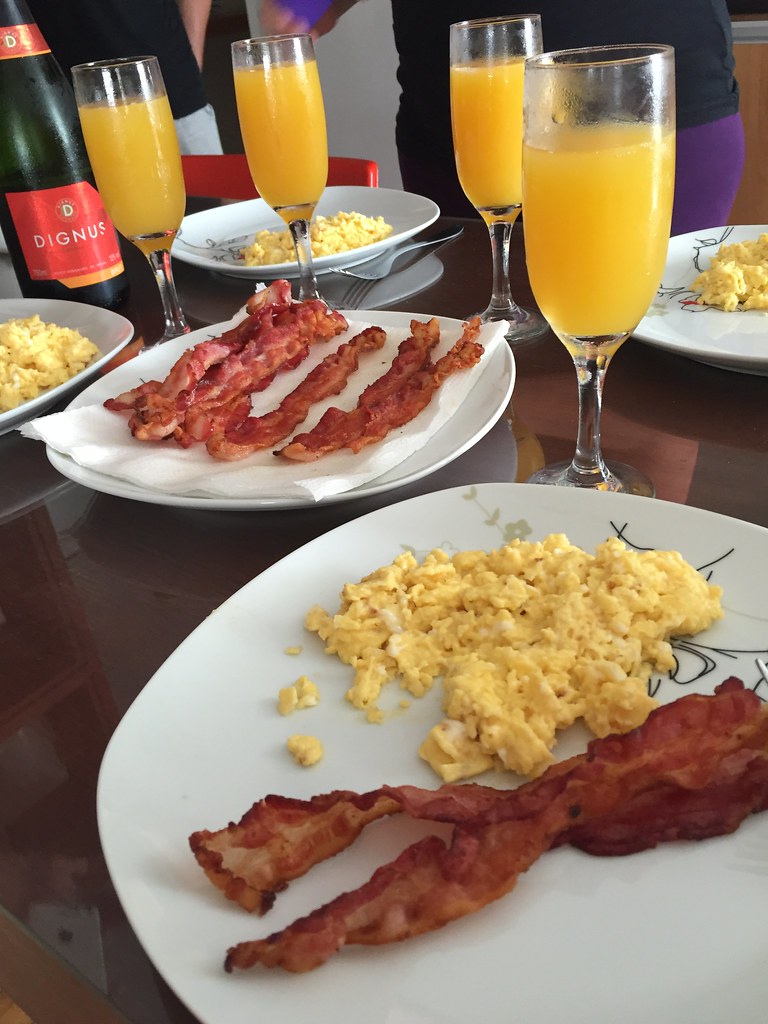 In the morning we started things with a wonderful breakfast complete with mimosas. So maybe not out with everything old!