We left Boston, in not so nice weather, and headed south towards Cape Cod, making a quick stop in Plymouth. Striking out on any of the nicer, recommended restaurants for lunch due to it being late in the afternoon, we had some pub grub and shandy's on tap at the wacky T Bones Roadhouse. Saved from starvation, we braved the crazy wind, rain and cold and toured the Mayflower II. It's pretty damn interesting; the tiny ship, a replica of the Mayflower, was built in England and crossed the Atlantic in 1957. 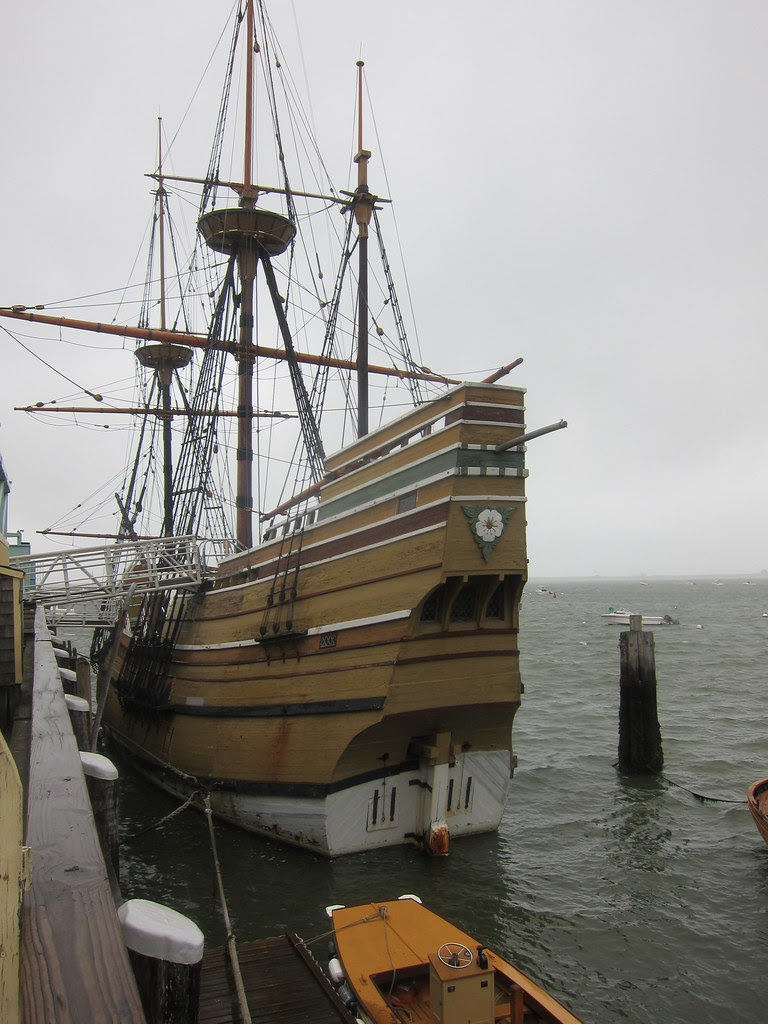 The staff on board are dressed in period garb and answer your questions as if they are actual passengers and crew. A little hokey, yes, but still very informational. Those quarters were small!! Those beds were small (the few beds there were!). The whole ship was damn small for 102 people.

And of course you can't go to Plymouth without seeing the rock. A plain grey boulder with 1620 engraved on it. It's housed under a grand cement canopy which seems all together crazy, but I didn't get a photo of that cuz it was damn cold and stormy and my feet were soaked! 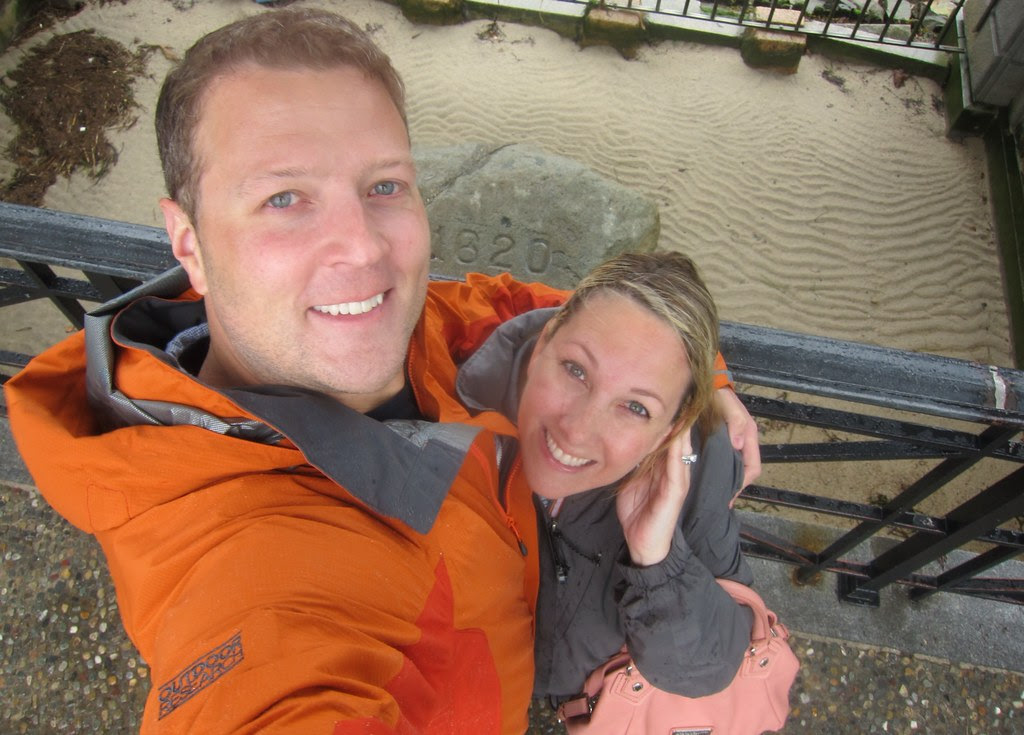 From the looks on the drive in and out of Plymouth it seems like a really quaint place with old houses and shops, but that storm had us back in our car and back on the road to Cape Cod. As we crossed the Sagamore Bridge onto the cape, here was our view, ugh. We stuck to Route 6, the fast but boring highway, all the way to Provincetown, the northern most point. We found the Brass Key Guesthouse easily and were so happy that we had chosen it for our stay! The owners purchased surrounding houses over time, creating a bit of a compound, with a lovely patio, pool and hot tub in the center. Each "house" has its own feel, we were in the Captain's House which was where the evening wine and cheese hour was hosted and also had a roof top deck with lovely views. 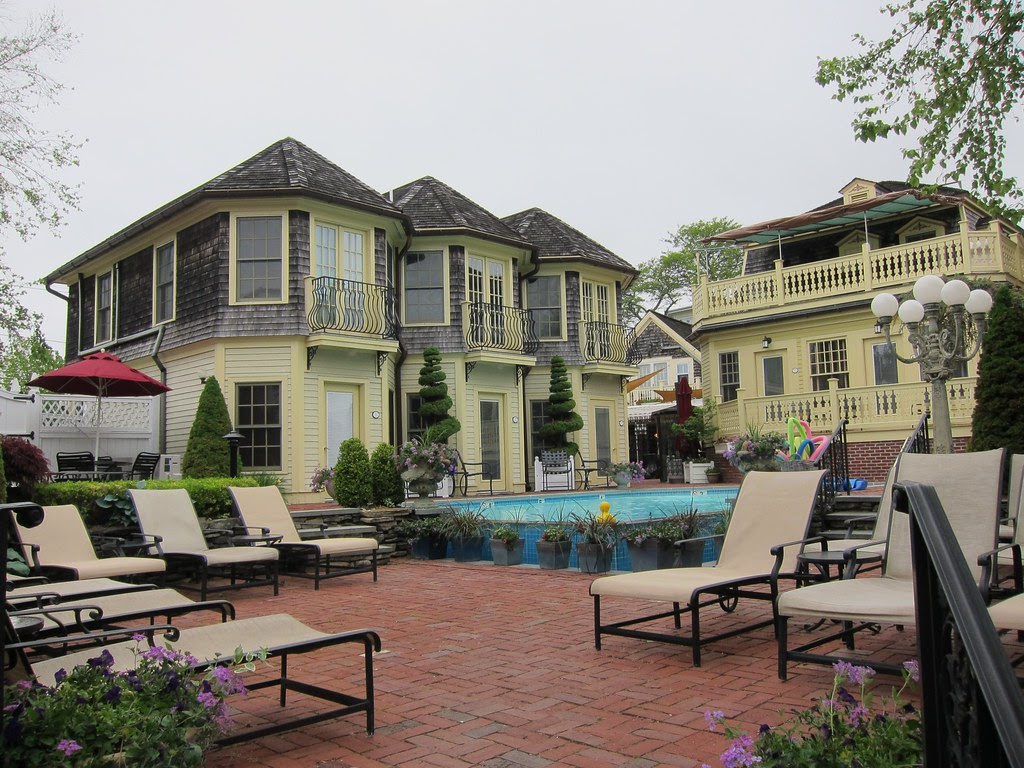 Wine and cheese hour over, we went out to explore the town and being as it was the opposite of flip flop weather, I went in search of a new pair of more suitable shoes. Luckily, Commercial Street is full of cute boutiques and I was wearing new shoes in no time. We made our way down to the very old and divey, Govern Bradford for a pre dinner drink (not great but we've had worse) and then on to dinner at Jimmy's Hideaway. This was such a great spot! The owners, Jimmy and Raife, were so fun, we moved to the bar after dinner and had a blast. And if Jimmy isn't the spitting image of George Clooney... 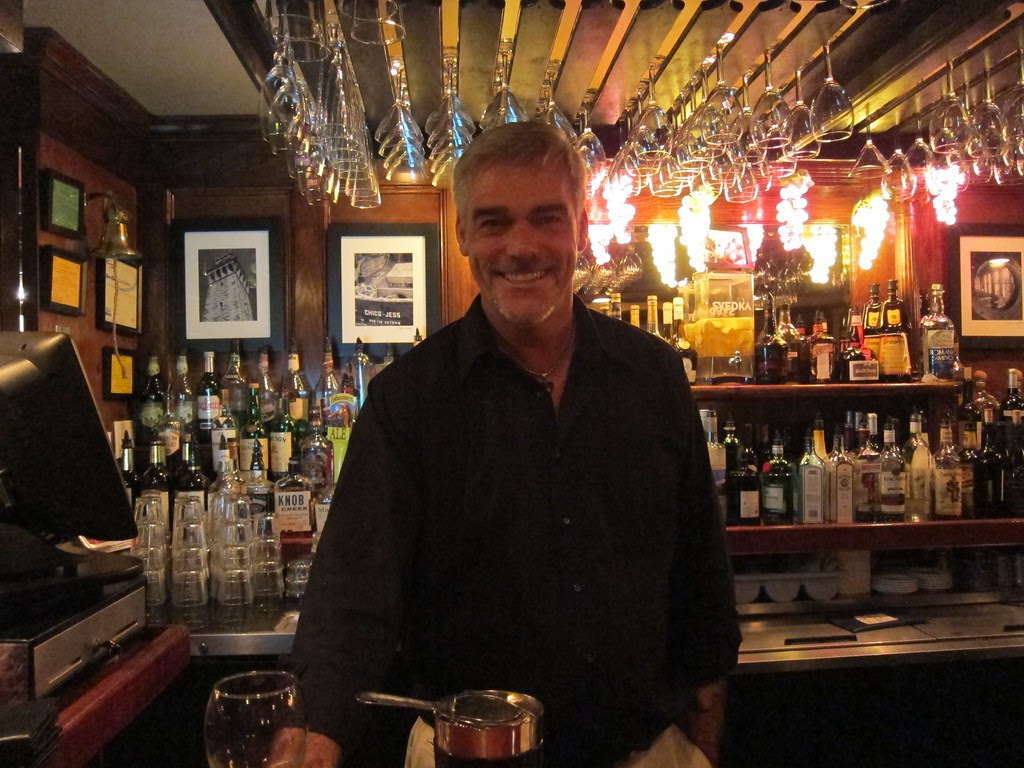 We ran into them twice the next morning and they shouted a friendly "hi!", too bad that when we tried to have after dinner drinks again there that night they were closed. Don't try to go on Tuesdays!

In the morning grey, drizzly skies greeted us again so we took a little tour around the lower/outer cape as the area is called. Most people don't realize that before the pilgrims landed at Plymouth, they landed at Provincetown. There is a 252 foot memorial tower in their honor and Dayne decided to climb the 116 steps to the top, I decided to map out where we were having lunch :) 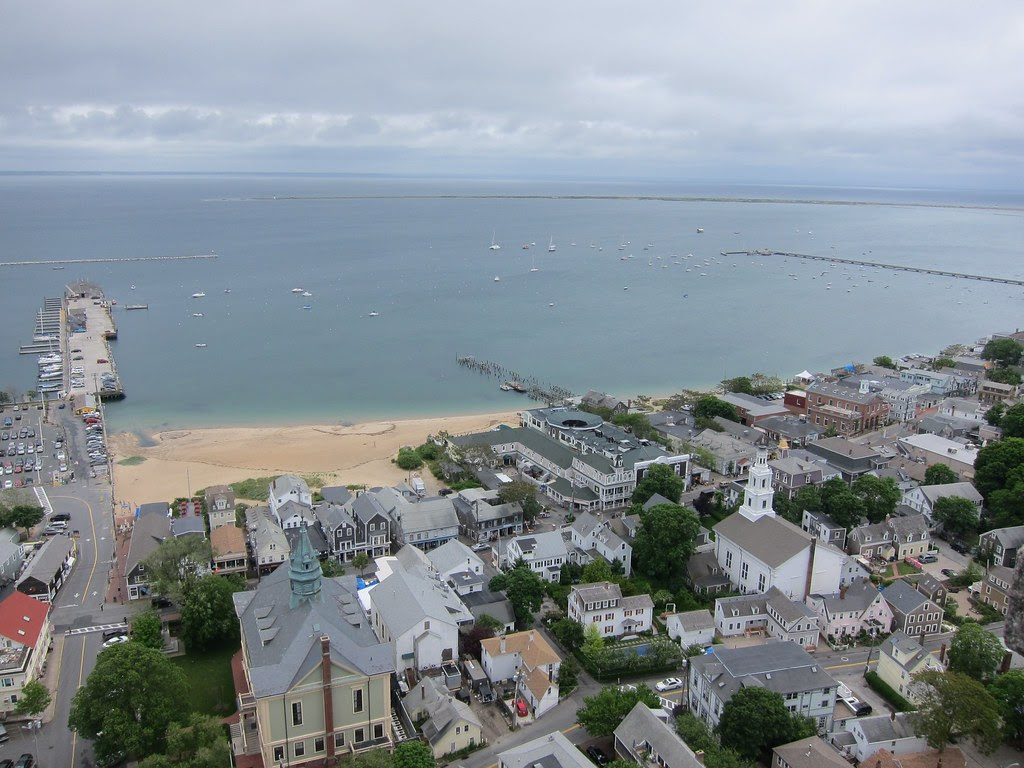 Our afternoon consisted of the BEST lobster rolls at The Friendly Fisherman in Eastham (really, we ate lobster rolls everywhere and this was the best!), a drive along the beach to the famed and much photographed Nauset Light (they leave off the word "house" those wacky Cape Codders!) and finding the strange and tiny Three Sisters, lighthouses that have been moved away from the coast and into a park. We also visited the Marconi Station site and took a nice walk on the White Cedar Swamp Trail. Our stop in Wellfleet for afternoon oysters was ill timed as most places weren't open for the season yet, so after a nice drink at Winslow's Tavern we visited the oldest lighthouse on the Cape, Cape Cod Light, before returning to our hotel for wine and cheese hour and a soak in the hot tub. 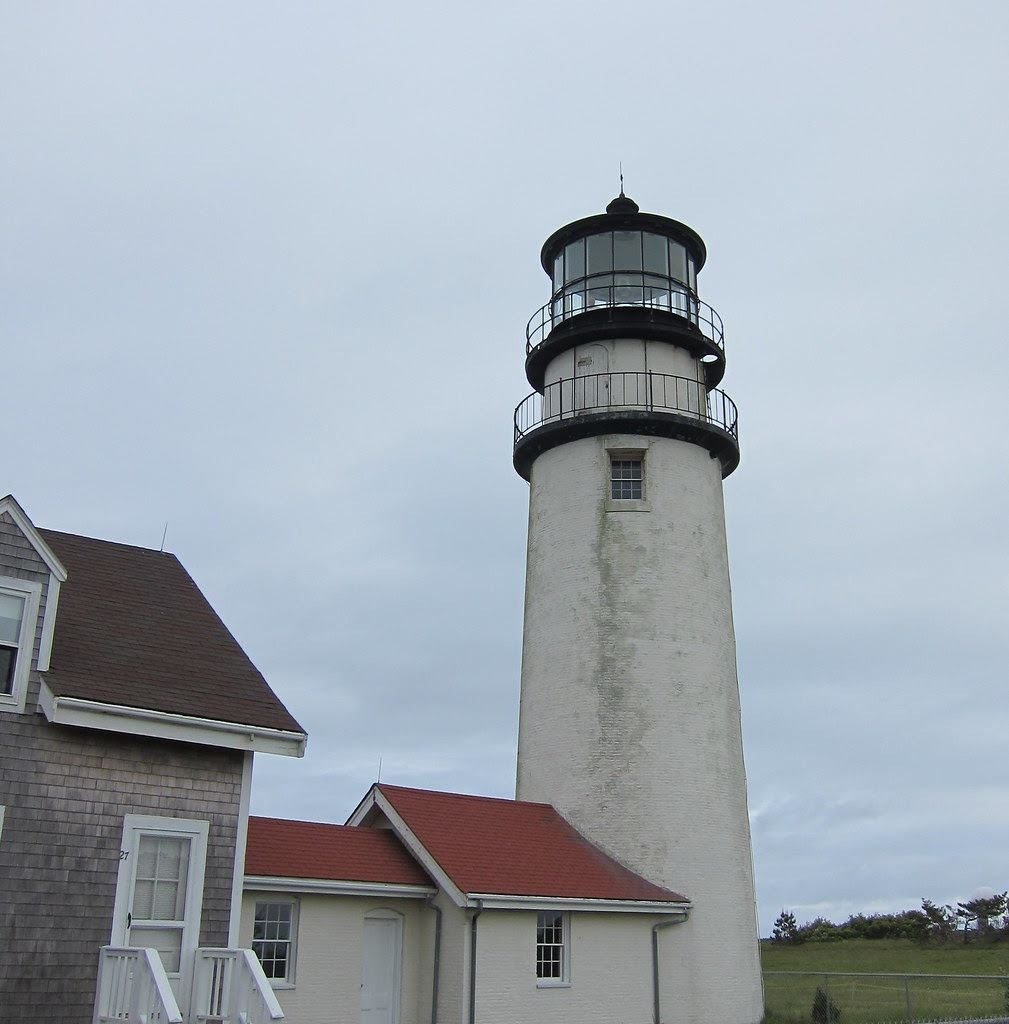 Another fantastic recommendation from our hotel concierge and other guests led us to Victor's for a wonderful dinner.  And no visit to P-Town is complete without a visit to the Crown and Anchor. Being right before the "season" it was quiet but we still met a cast of characters to entertain us. 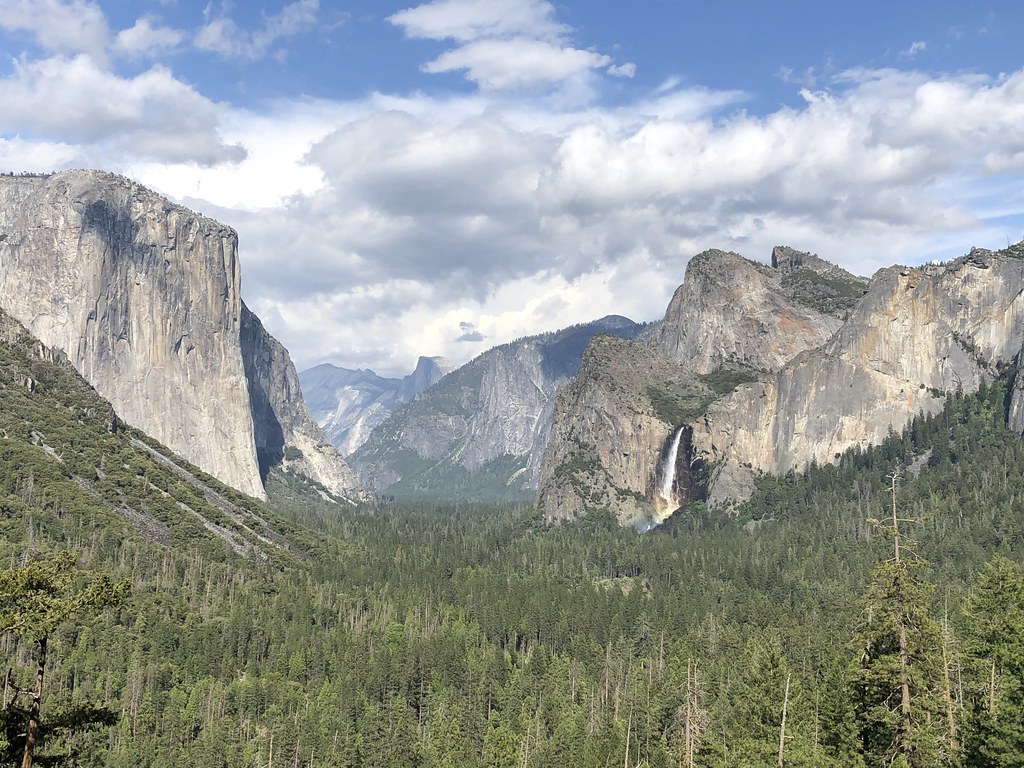