On our second day in Reykjavik we were picked up in the lobby of our hotel by Iceland Rovers for a full day excursion which was included in our package. As we climbed into the Land Rover, outfitted with oversized tires, we met the other 2 couples who would be riding with us for the day, one from our own backyard of Woodinville and the other from DC. The Washington Six I'll call us. Our driver Steinar was really excited about the weather conditions and told us more than once that it was going to be a great day and we were going to see some amazing things. None of us seemed to really know what all was included in this day trip but everyone was excited (and really nice thankfully!) 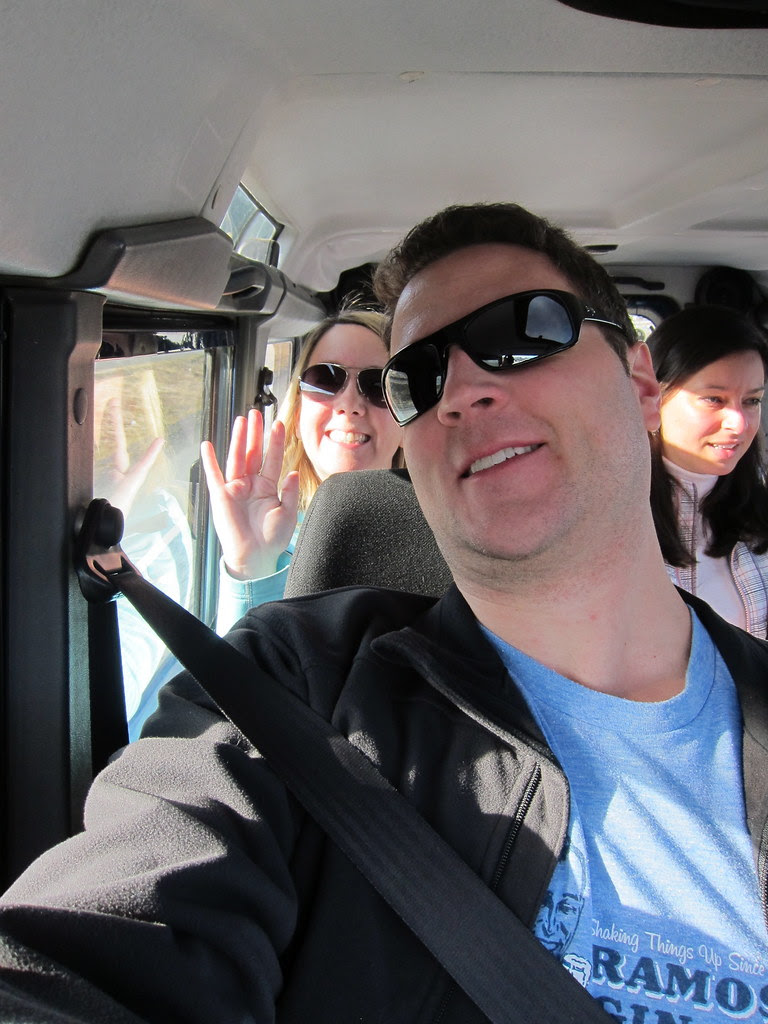 This was everyone's first glimpse of Iceland outside of the city and we were all impressed with the strange landscape. We had lots of questions for Steinar, who seemed happy to share his incredible knowledge of his country (Steinar can trace his roots back to the first Vikings who settled there). After driving under the fjord Hvalfjörður, one of the longest underwater road tunnels in the world, at a depth of over 500 feet, we came to Deildartunguhver which is the highest flow hot spring in the world at a rate of 180 liters per second. This water is sent through pipes to neighboring towns and was quite a first wonder for us all. 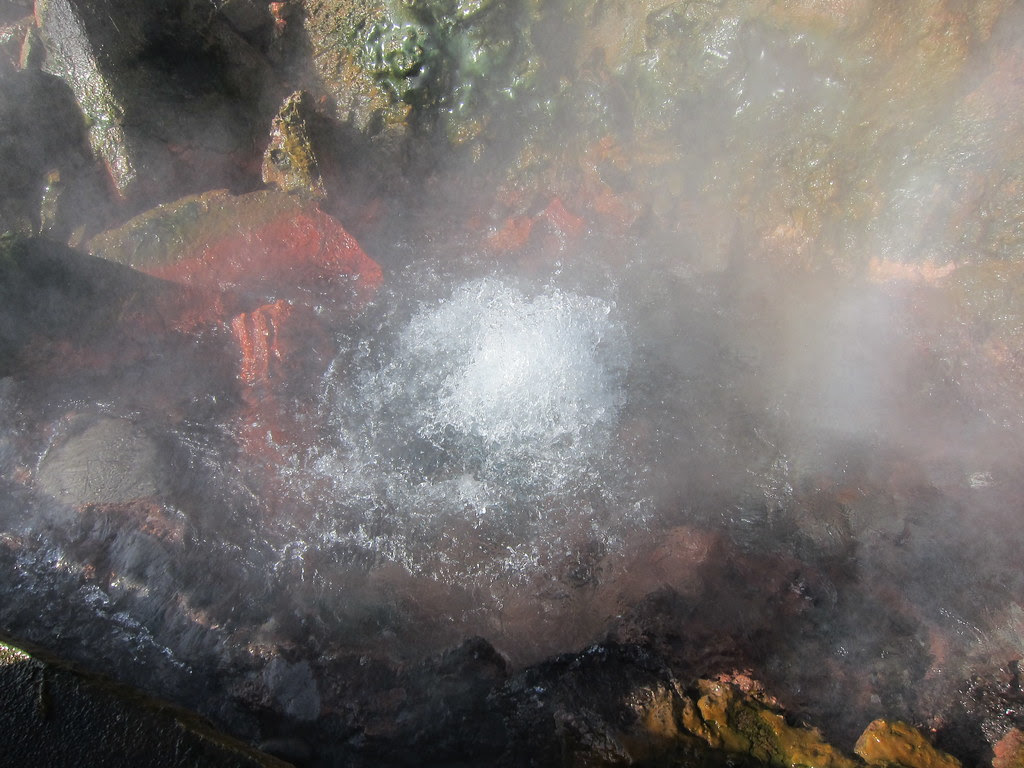 From here we drove further out to the middle of no-where until we came to the waterfalls of Hraunfossar and Barnafoss. At these falls, in the middle of a huge lava flow, you can really see how the water is forced to exit under the lava as it can't travel on top of it. 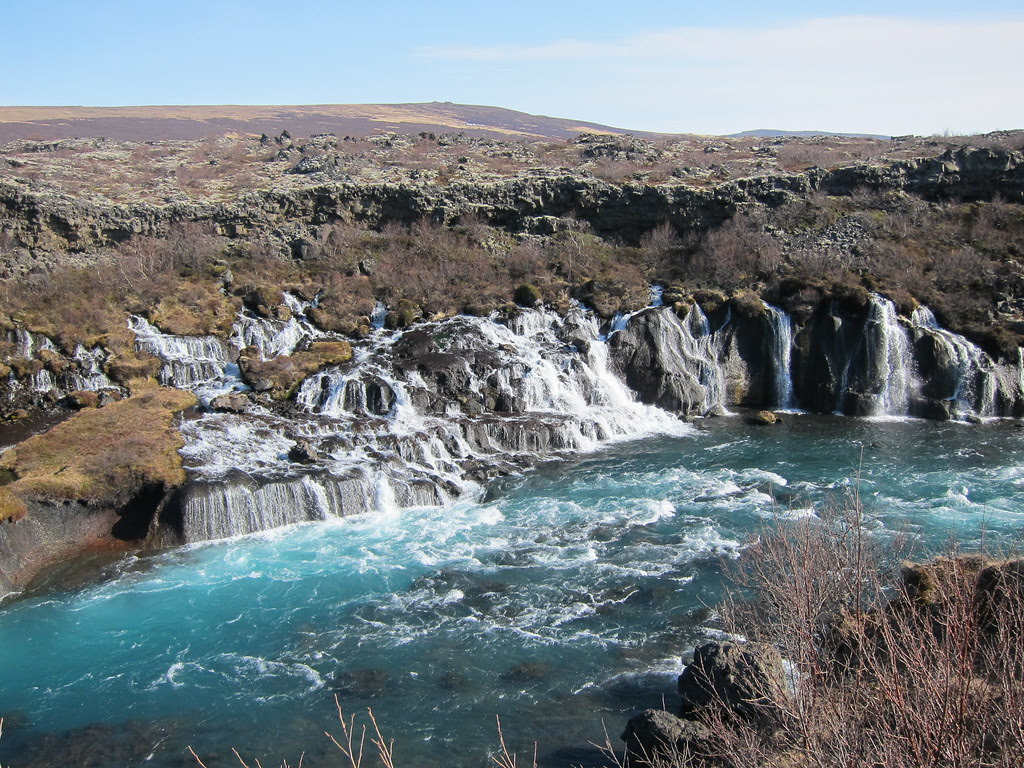 We were able to hike around the two sets of falls, with rope warning us only not to step on the moss growing on the lava. Unsuspecting tourists could easily fall in just like the children that the falls are named after. The water here was so blue it was almost surreal, it was a gorgeous area to explore. 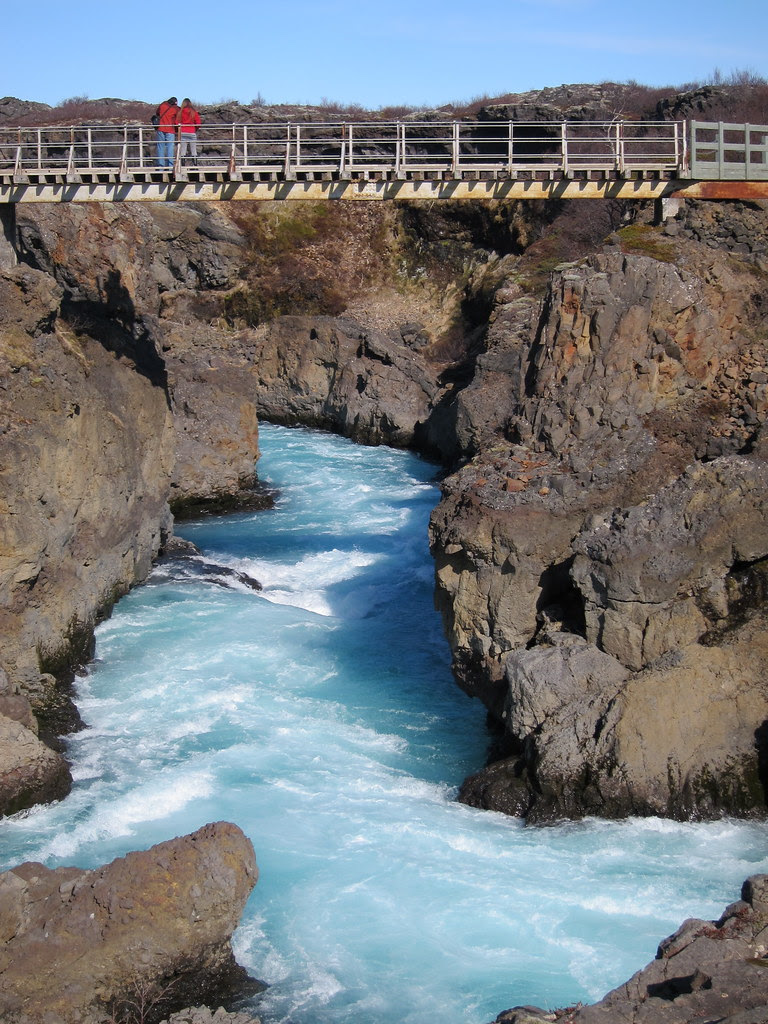 A short drive from the falls, we turned onto a dirt unmarked road and parked in the middle of the Hallmundarhraun lava flow. Here we donned helmets and headlamps and made our way to one of the largest lava caves in the country. Steinar explained to us that to find these caves they fly over the lava fields in the winter looking for holes in the snow where parts of the roof of the caves have collapsed. Then in the spring they go to check and see if it's an actual lava tube/cave. 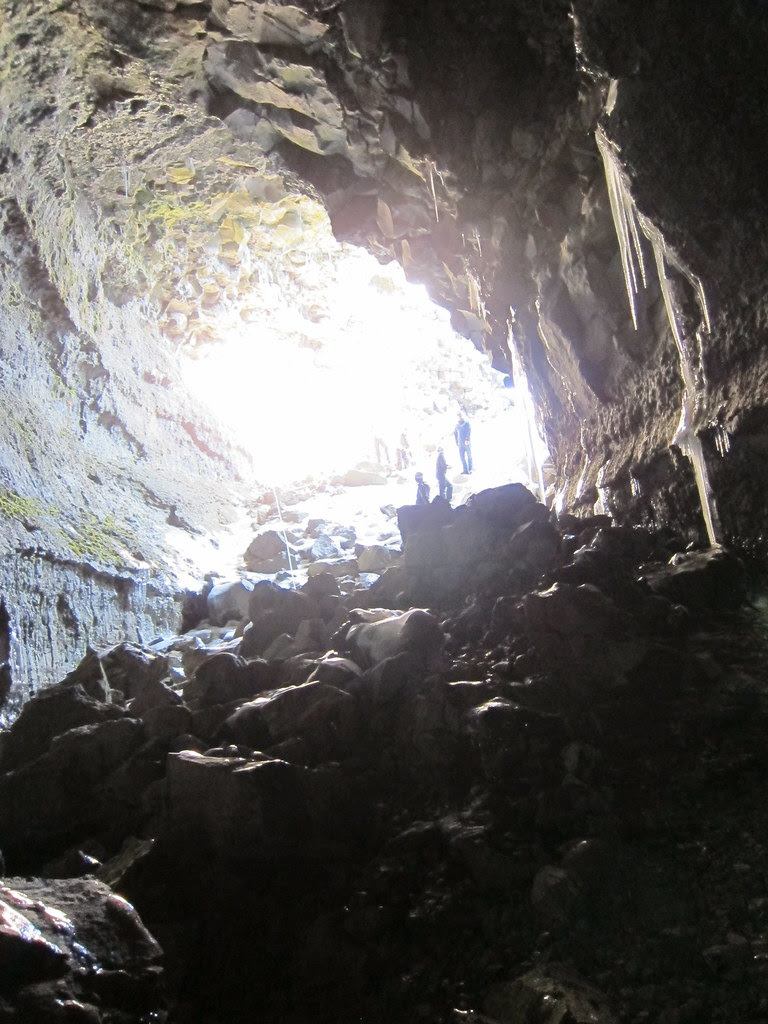 We first climbed down a ladder into the opening of the cave. Then we carefully descended the snow, ice and rock into the cave itself. Once inside it wasn't all that deep, well it is but they have it blocked off for only official spelunkers which we are not. We clambered around the rocks and frozen ice while Steinar gave us more geology lessons. 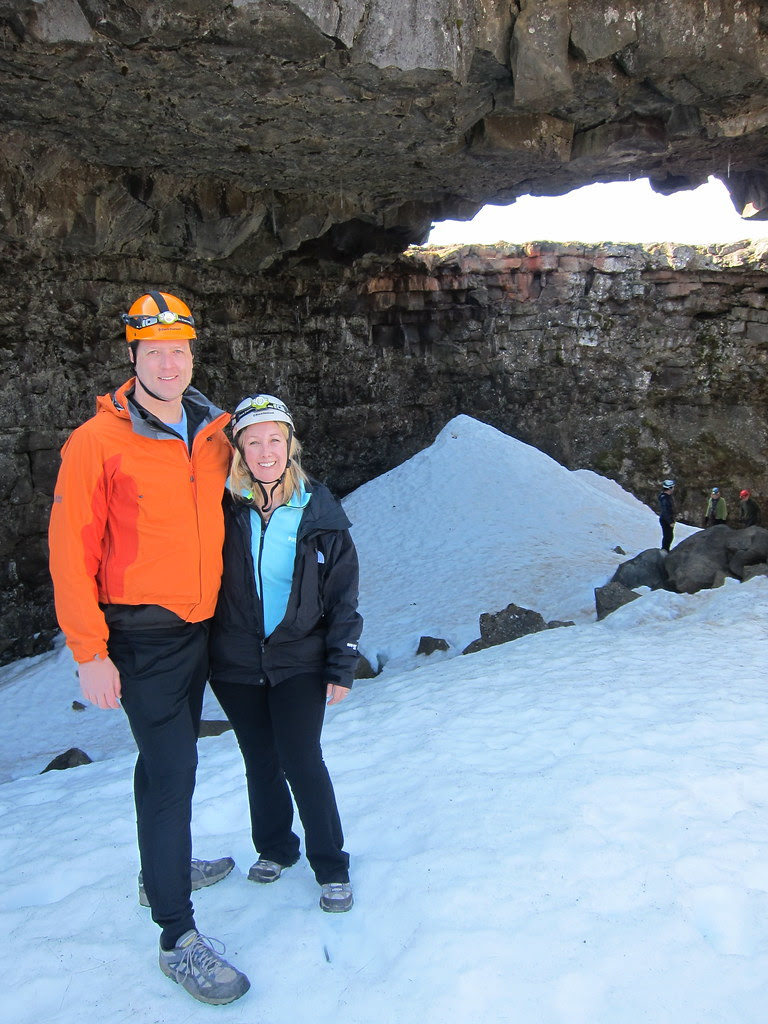 Back to the Rover we headed farther into the interior of the country and towards our lunch stop. There were four other trucks doing the same excursion but up until now we had only seen them arriving as we were departing the various sites. The drivers had been speaking to each other via CB radio with us being able to hear their conversations but not understanding Icelandic it didn't affect us much. As we traveled along a river toward a bridge their conversation turned to English with comments about the bridge not being safe, not worth much, etc etc.  All of a sudden Steingar turns off the road and into the river! Everyone was laughing and whooping it up as we crossed the (not very shallow) river with the other trucks in tow. 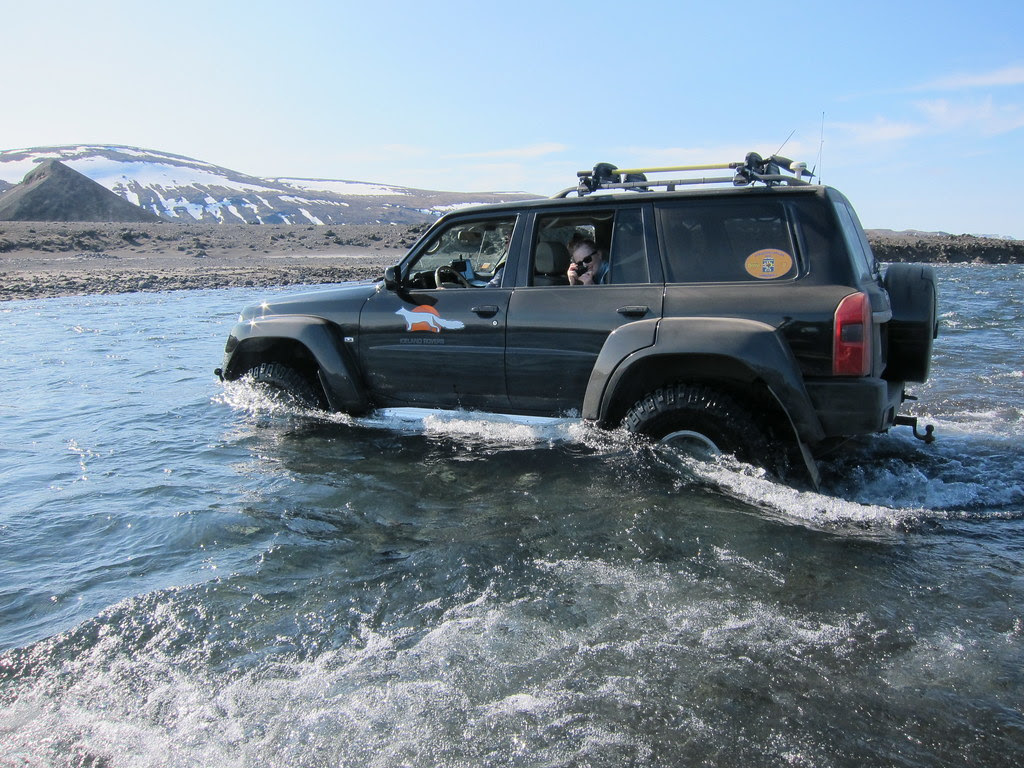 It was quite exciting really, and the guides were just having a blast! After a stop for some traditional lamb soup with fresh baked bread and Viking beers we would continued on our exploration.