And speaking of Germany... After leaving Munich we spent the day driving along the Romantic Road, a motorway connecting 27 medieval towns. It wasn't feasible to try to stop in even a handful of the towns so we chose just three. 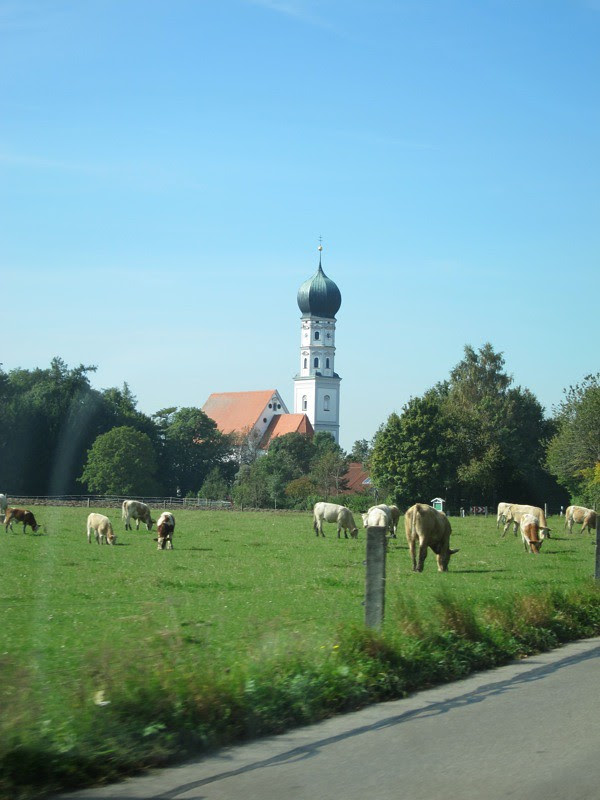 Our first stop, Landsberg am Lech, was just a bit south of Kaufering, where we had been staying. Landsberg is a lovely walled town dating back to 1800BC. We spent the morning exploring, taking in the buildings which are hundreds of years old and are mingling with more current things like satellite tv disks and IKEA delivery trucks. 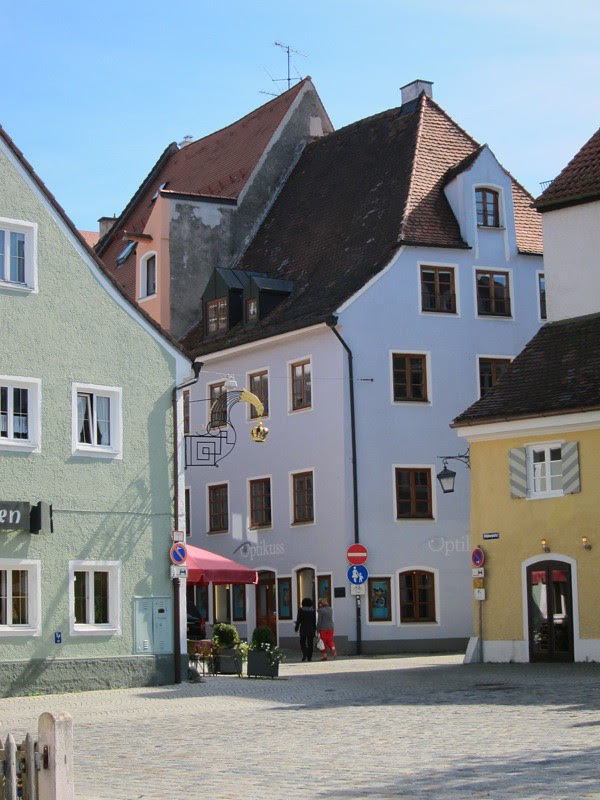 We chose a little restaurant right on the river and had lunch outside, enjoying the sunny fall day.

And then it was off to our next stop- Augsburg. Augsburg is the 3rd largest city in Bavaria so we had to narrow down what we wanted to see. We chose to visit the Fuggerei which is called the oldest social settlement in the world. It was established in 1521 as a neighborhood for the needy. Rent for one of the 140 apartments is still just one Rhine gilder (.88 Euros) a year and three prayers a day for the founder and his family. 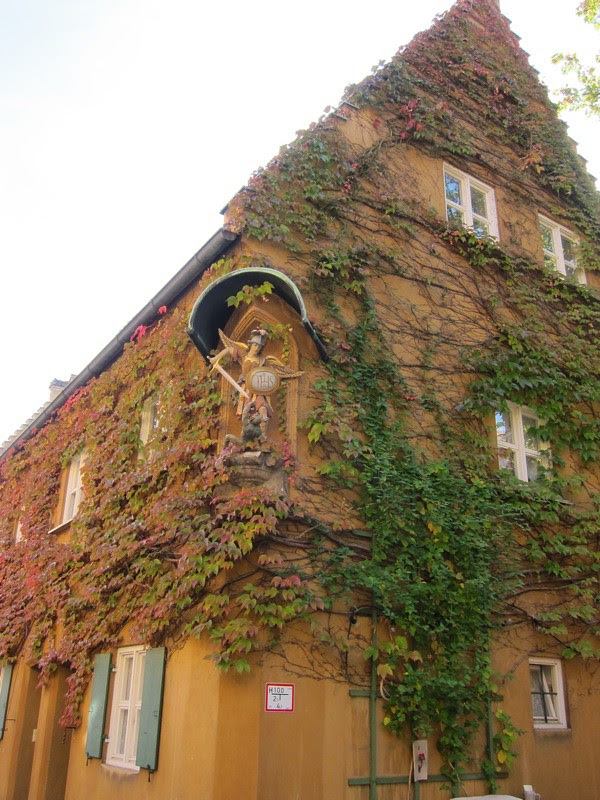 It's a really interesting settlement, the alms houses are the originals and one is set up so you can see how small they are inside. Since there was no electricity back when they were built each door has a rod which activates the door bell and the handle of each rod is unique so people could feel which one was theirs. The whole neighborhood is a little town within the city and is walled off with private entrances for the residents.

After enjoying a beer in the Fuggerei cafe we were back on the road to our final destination of Rothenburg ob der Tauber. This is perhaps the most popular of the towns along the Romantic Road as it is one of the best preserved medieval towns in Germany. 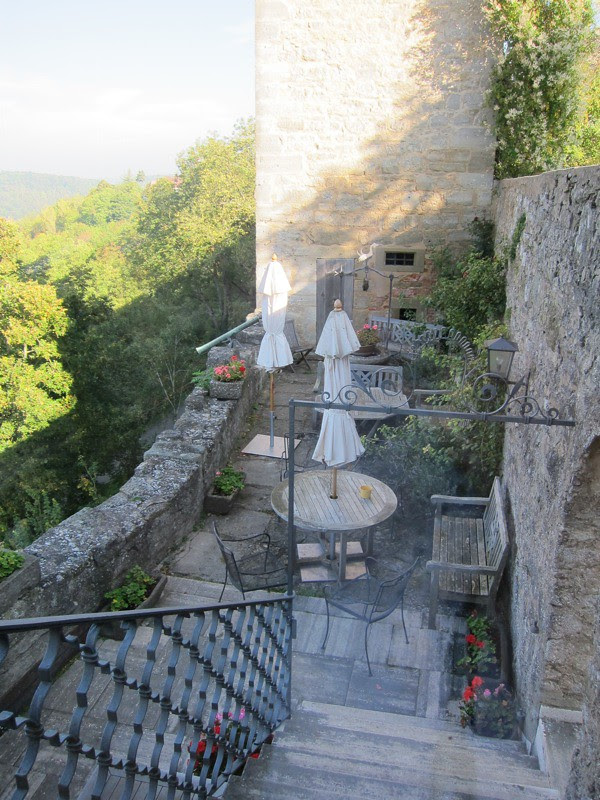 We were staying 2 nights at The Burg Hotel which is built right into the town wall and has amazing views of the valley. We had been warned about the day trippers who clog the tiny streets so we were looking forward to having the town emptied out during the evenings. That evening was spent dining outside under huge trees with glowing gas lamps. Not the best meal of our trip but great atmosphere. 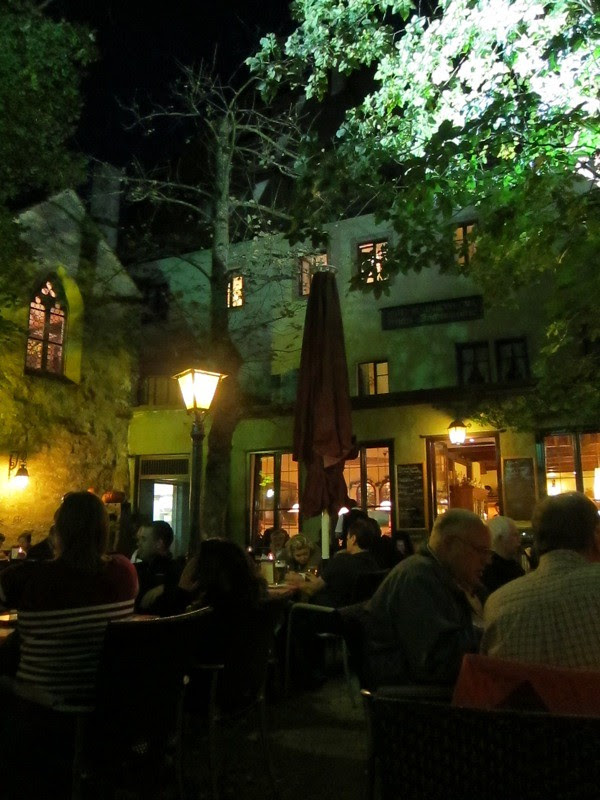 We spent the entire next day enjoying the town. We climbed the tower at the Rathaus. This was the scariest view ever. You climb up a rickety wooden spiral staircase and literally have to crawl out the hatch onto the bell-tower walk. The circular platform holds 4 at a time and is barely wide enough for one. But the views were gorgeous!

After lunch we walked the city's wall- you can go almost completely around Rothenburg although for Dayne it was a bit uncomfortable as the ceiling beams were just shorter than he is tall which meant he had to cock his head!

Rothenburg is also known for their Criminal Museum. It's filled with all means of implements for torture and punishment including chastity belts,  drunk tanks, racks and weapons. We got quite the education in medieval torture.
And, although it's not as grand as the Glockenspiel in Munich there is a clock and sundial on the outside of the "Councillor's Drinking Room" where every hour two figures appear at the chime drinking steins of beer.
We took advantage of the lovely terrace at our hotel, some leftover gin and cheese from the house in Kaufering and had aperos at sunset outside. 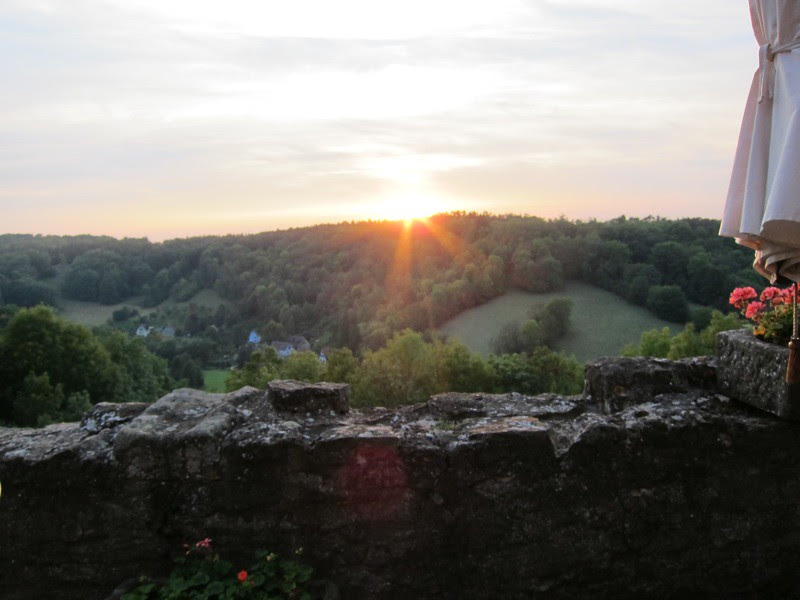 The other big attraction is the Night Watchman's tour. This takes place at dusk when the watchmen use to go around lighting the gas street lamps and locking up the entrances to the city. Although a bit hokey there is a lot of history and it's quite a fun walk. It just so happened the night we went was the largest attendance he'd ever had, what happened to all the day trippers leaving at night?
After the walk we had a delicious dinner at Zur Holl which is in the oldest original building in town, dating from 900. 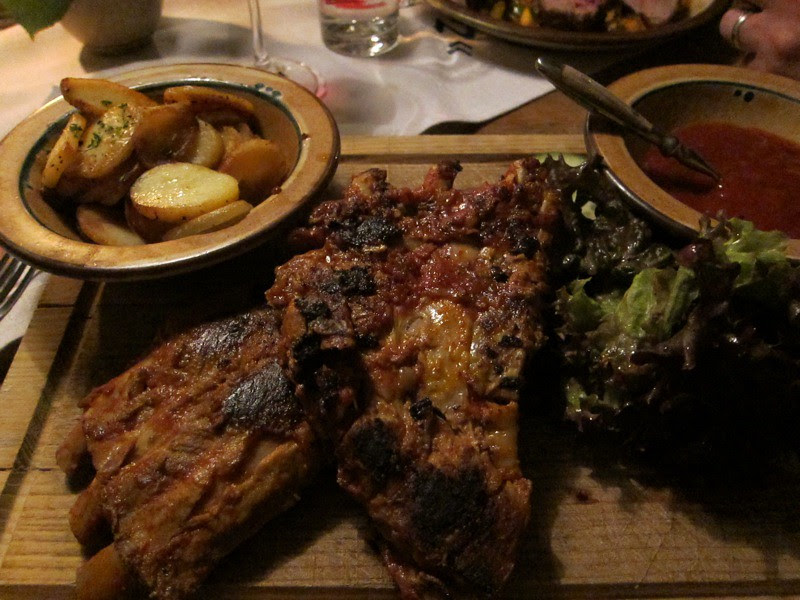 The town is just impossibly cute and we were really glad we decided to stay a couple of nights to take it all in. 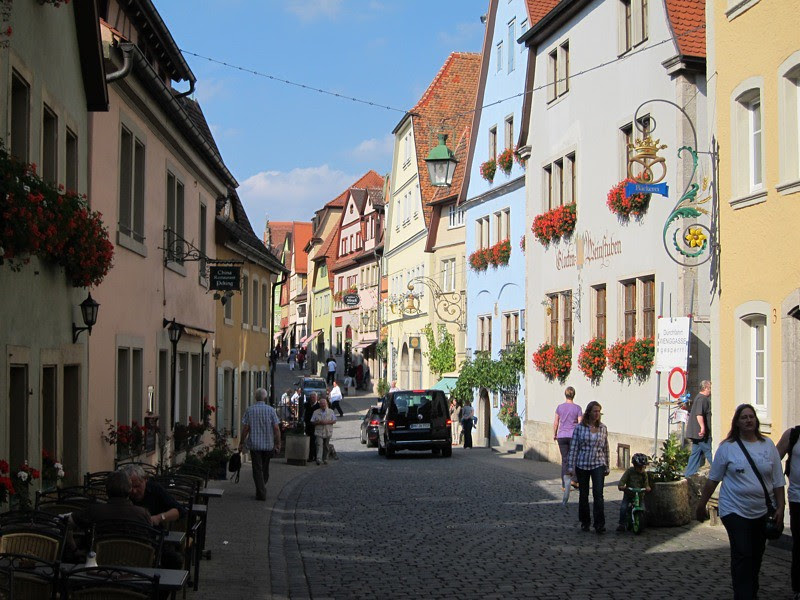 The next morning we drove to Frankfurt to catch our train to Hamburg. I drove 180km on the autobahn. It was a serious thrill, and this was in a crappy Opal rent a car. If only I'd had my Saab!!
Lovely photos of the Romantic Road area here.
at October 23, 2011