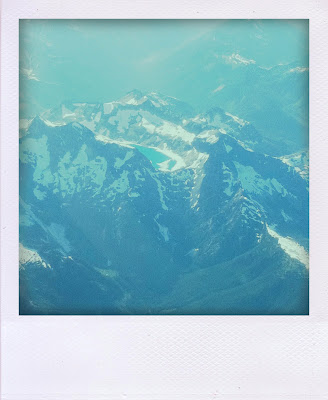 I've cashed in some miles to meet Dayne in Europe while he works for a month in London. I'm sitting in the first class of Iceland Air which is basically like being in first class on Alaska Air - same plane I think, absolutely the same configuration.

But there are differences of course. Before boarding I was able to sit in the first class lounge which they share with British Air. Free wifi, free wine or cocktails, snacks, etc. Your basic first class lounge & very relaxing to hang while waiting.

Once on board I was welcomed with a glass of champagne, fuzzy blanket, pillow (don't see those anymore) & a Bally toiletries bag with some little treats. I plugged my electronicals into the jack in my seat. Next came the complimentary to borrow noise canceling headphones. Oh yeah, this I like!

We take off & it's happy hour. Gin & tonic for me accompanied by a dish of spicy peanuts/wasabi peas/soy beans. Shortly there after menus in leather covers are passed out announcing the evenings meal- salmon sushi rolls, steak with red wine reduction sauce, cheesy risotto, green beans, cheesecake with berry coulis & a chocolate truffle. A Barossa is poured in my glass. With the exception of the overcooked steak this is all very good & makes for a hearty meal. 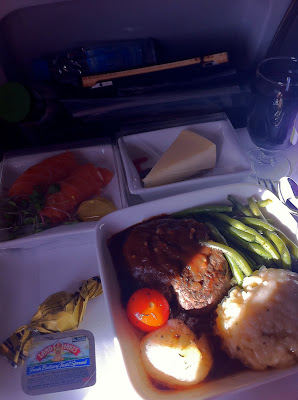 The wide seats recline about the same as the seats on Alaska Air (they really are the same planes) only these have foot rests also making it much more comfortable to grab a few z's.

In Reykjavik it was a quick transfer as the airport is quite small. My flight to Paris was 3 hours and there were 3 of us in the 1st class cabin, the rest was empty! Total relaxation as I spread my stuff out, had a little omelet for breakfast and then took a 2 hour snooze. 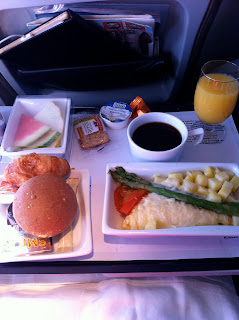 When I went to pick up my bag I noticed that they had them marked so that they came off first also. Handy. IcelandAir certainly isn't super swank and the seats in Sega don't have massage settings like some but I was happy to have the extra comfort and will look forward to my return flight in Sega Class also! 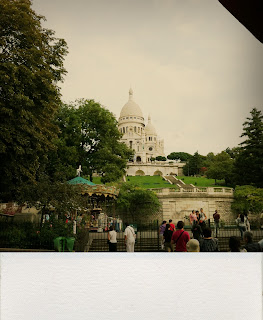