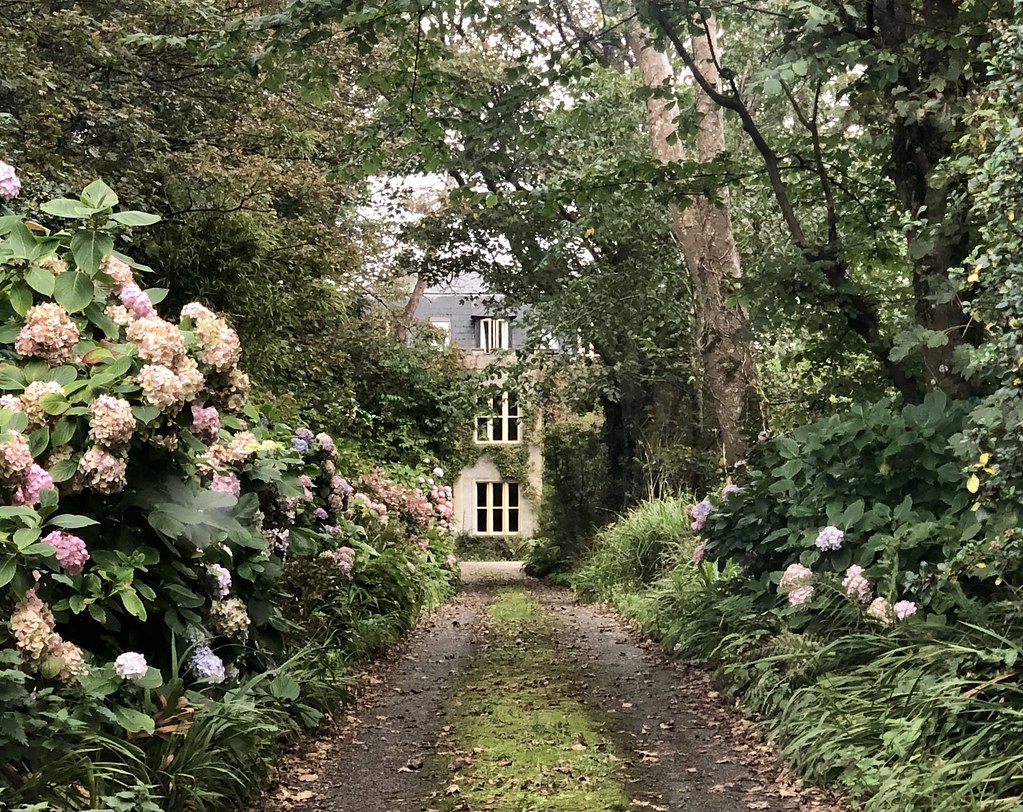 As the girls and I left County Mayo and drove into County Sligo and I immediately felt the surroundings to be a bit untamed and rugged, so it really wasn't any surprise when we drove down a gorgeous dirt road to the Ardtarmon House and found no one around but a lawnmower left as in mid-mow and everything eerily quiet. We figured a murder had taken place and voted for Nicky to go suss things out.

Luckily the owner had just decided to take a break and he and his wife were safely inside. The other residents were out for the day so it was just us when she showed us our rooms. There had been some misunderstanding during the booking and instead of a triple room the proprietor had made up three singles. We negotiated a bit on the price difference and then happily went to each of our private rooms. Mine was a large corner room with a separate seating area and views of the gardens. Lovely! 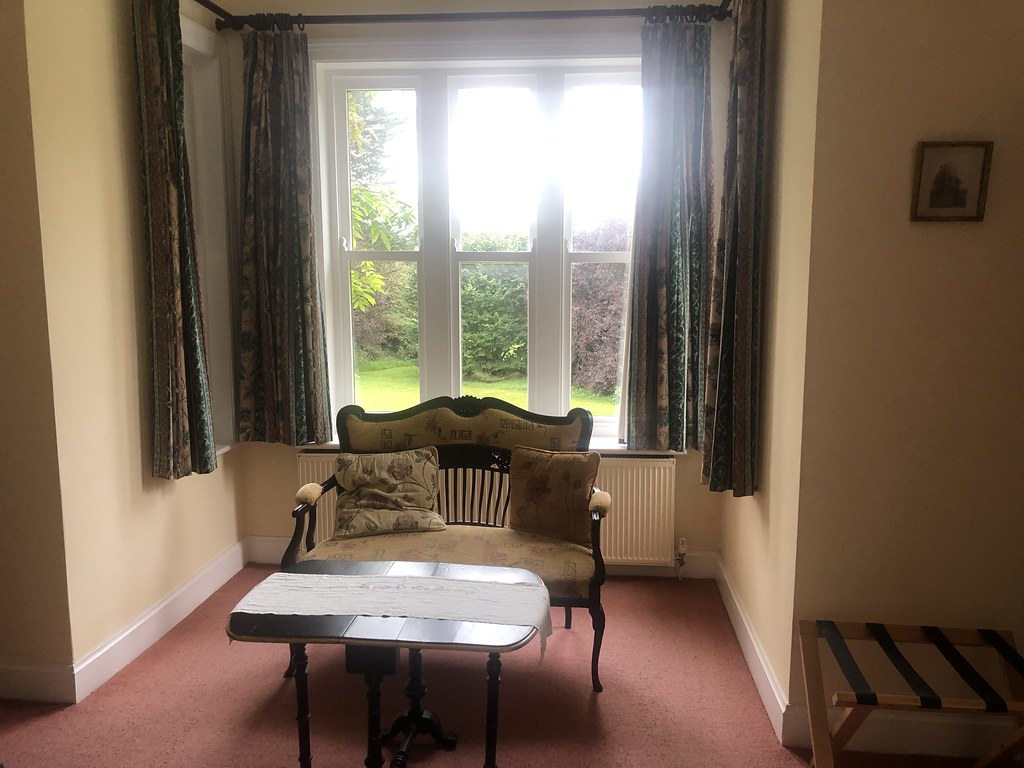 The guest house is 11+ miles outside of Sligo proper and on about 20 acres of property in the tiny village of Ballinfull. Having been in the same family since 1852 the property has pivoted from mainly farming to providing rooms to travelers. There wasn't much out here so when we decided to go on a short hike down to the ocean I asked Nicky why she was packing her wallet. "In case we find a pub, we're in Ireland after all!" I thought she was seriously wishful thinking as we hadn't even passed anything for miles while driving in. 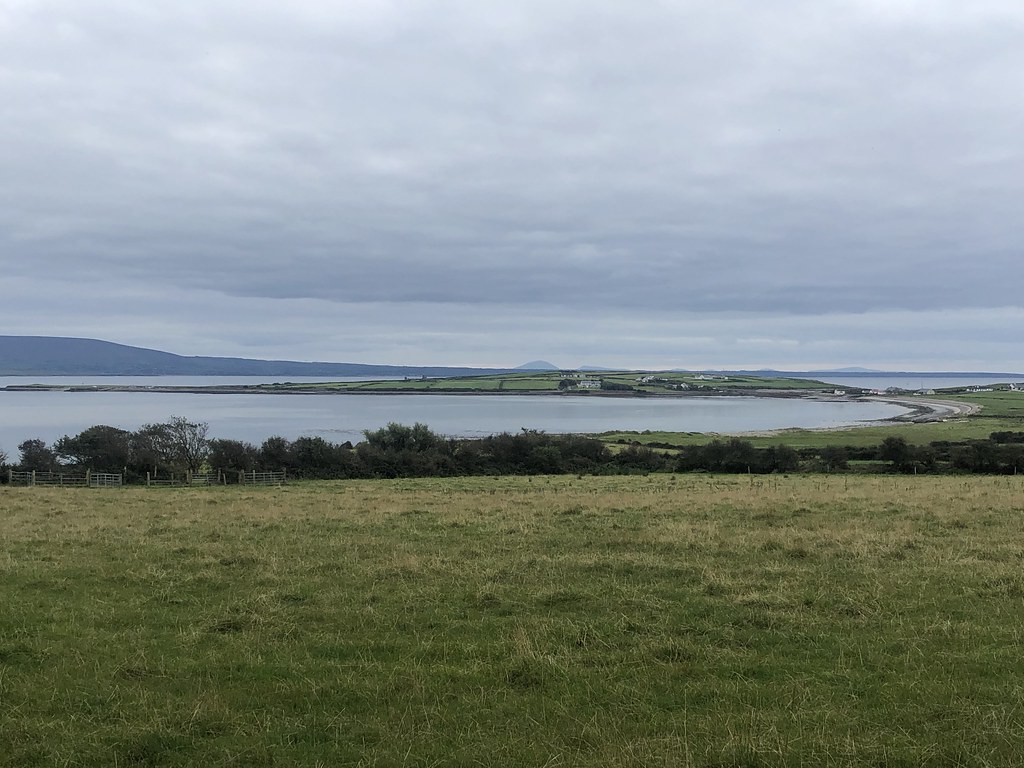 Our hike down to the shore was picture-perfectly Irish. Green grass fields, cows and sheep grazing peacefully, beautiful views of Drumcliff Bay. We spend a bit of time exploring the beach and then headed back towards the manor house on the grassy trail that bordered a small forest. 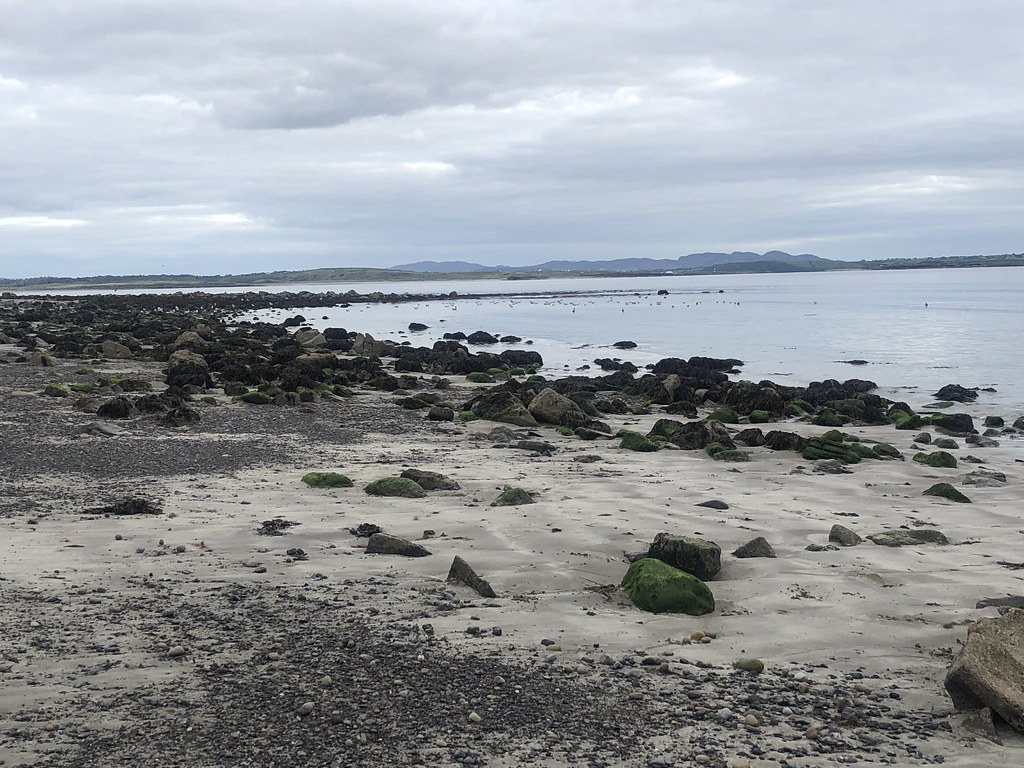 We saw Charles, one of the owners, back to his mowing chore, and Nicky asked him if there was a pub nearby. He gave us two options, Ellen's which was 3 km away and Jordan's which was 2km. Jordan's it was!

We walked the narrow country road, lined with stone fences, and tried to stay out of the way of the speeding locals who were clearly bored with the speed limit. We passed herds of cattle and Carrigeens Cemetery which must be the cemetery for most of the surrounding villages as it was quite large and even had a map posted to make navigating easier. 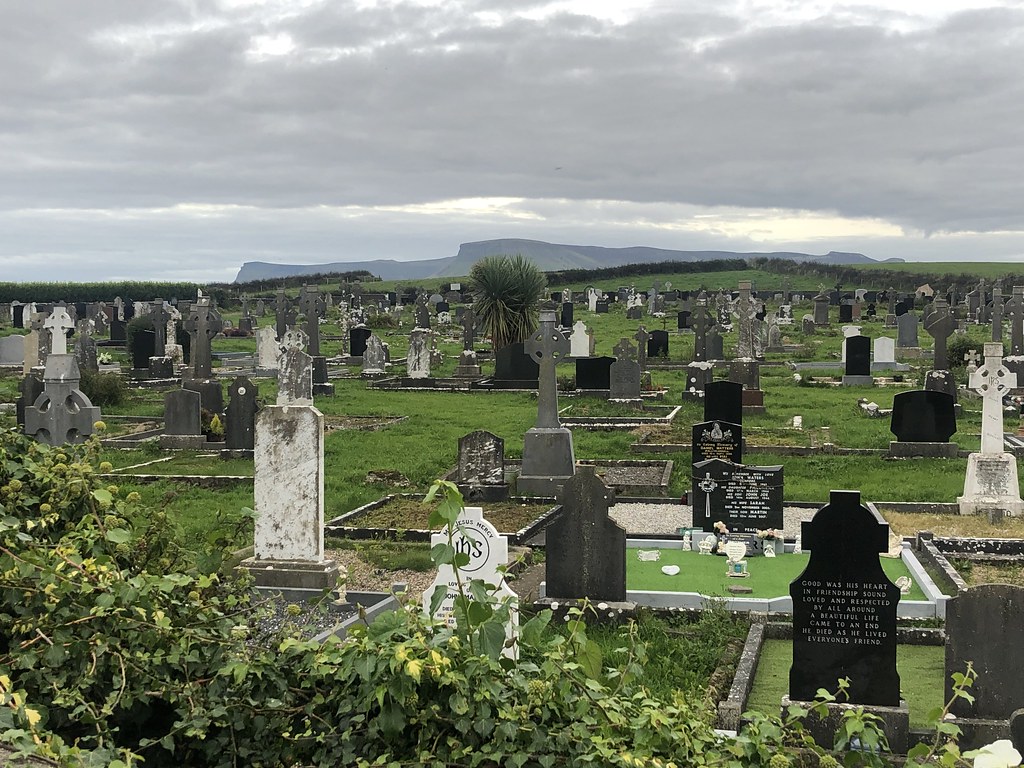 And then we came to a curve in the road and there was our destination. Jordan's Pub sits next to a field, it's parking lot was empty and I was sure we had walked here for nothing. But when Mr. John Jordan himself responded to my question "Are you open" with "this is Ireland!" we knew we were going to be just fine! 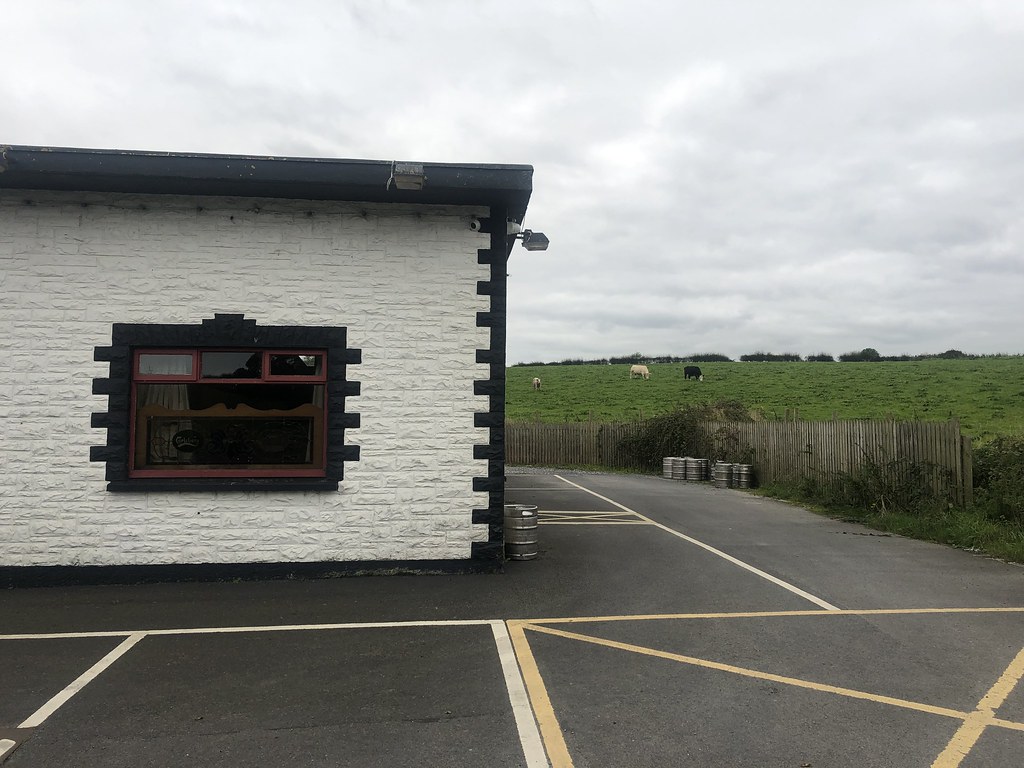 Luckily Nicky had her wallet so we were able to sit for a few rounds. We watched various locals come in, wonder on their faces about these three girls who were obviously not from around here, and ended up chatting with a few. I mentioned that we should watch the time as we didn't want to be walking down that road in the dark.
We had a great conversation with a local oyster farmer, who drew us a map on a cocktail napkin and invited us to come visit the next day. The owner had left his daughter behind the bar while he went out for a bit, and shortly after the phone rang and his daughter said "Girls my dad is in town and wants to know if you want him to pick you up some dinner". God love Sligo!
When John returned and we mentioned we should go he said his daughter would drive us home! Now that is some real Irish hospitality right there! We finished the night in my room with some wine the girls had brought and the cheese I had purchased in Dingle. The Irish have a word for "a good time", it's craic. And let me tell you, there was some good craic at Jordan's! 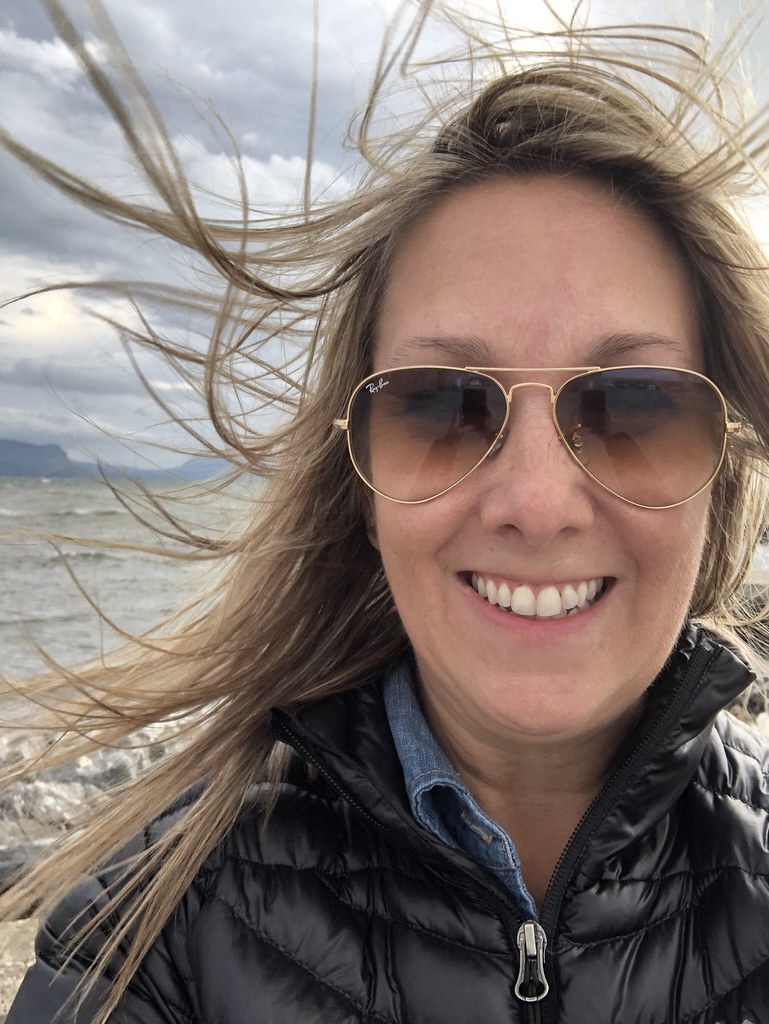 The next morning we had breakfast at the guesthouse made by Charles and his wife Christa and heard all about Hurricane Lorenzo which was crossing over the northern part of Ireland. Pretty much right where we were driving that day!! We made a quick stop down at the harbour to see the views and got a taste of the wind! 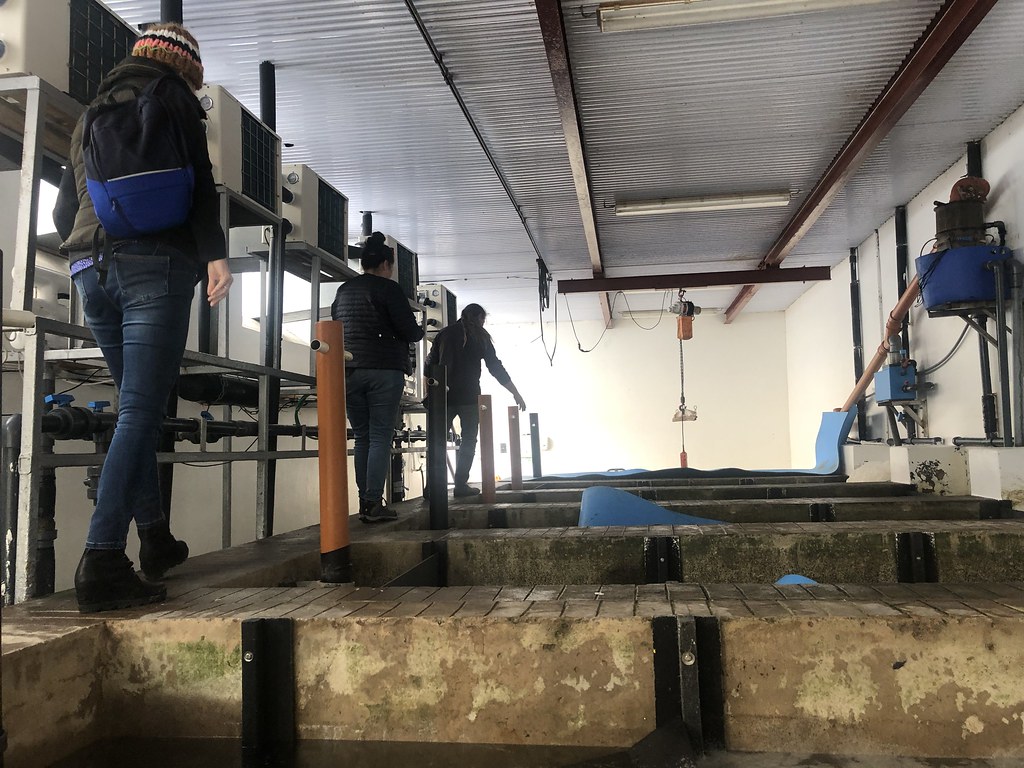 Then we tried following the map to the oyster farm but got a bit lost. Luckily the woman who we stopped to ask seemed to know him and pointed the way, "go to where the road ends at the sea and where it says STOP HERE keep on going". Ok then!
We had a nice tour of the oyster farm with our new friend from the bar. He showed us around and then opened some for us to taste. More Sligo hospitality! 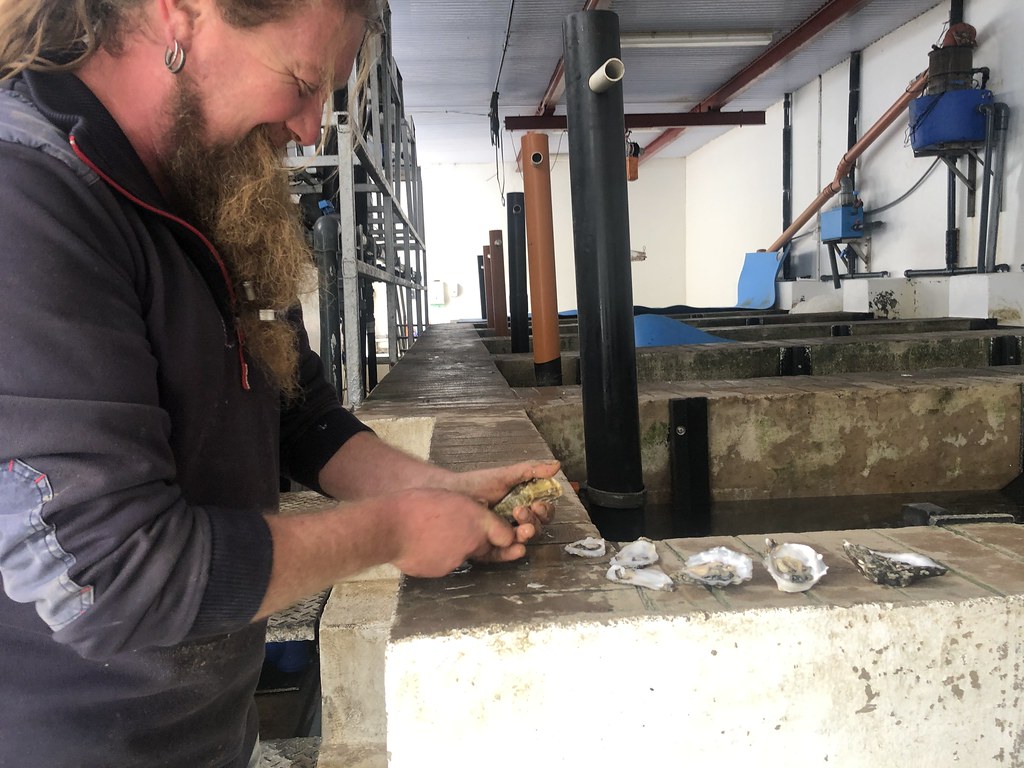 We didn't stay long as the storm was really kicking up and we had a couple of hours drive to our next destination. But not before stopping at the grave of Irish poet W.B.Yeats. There are many reports that the actual bones in the grave here are not his at all, but the locals don't care and actually refer to the area as Yeats County. 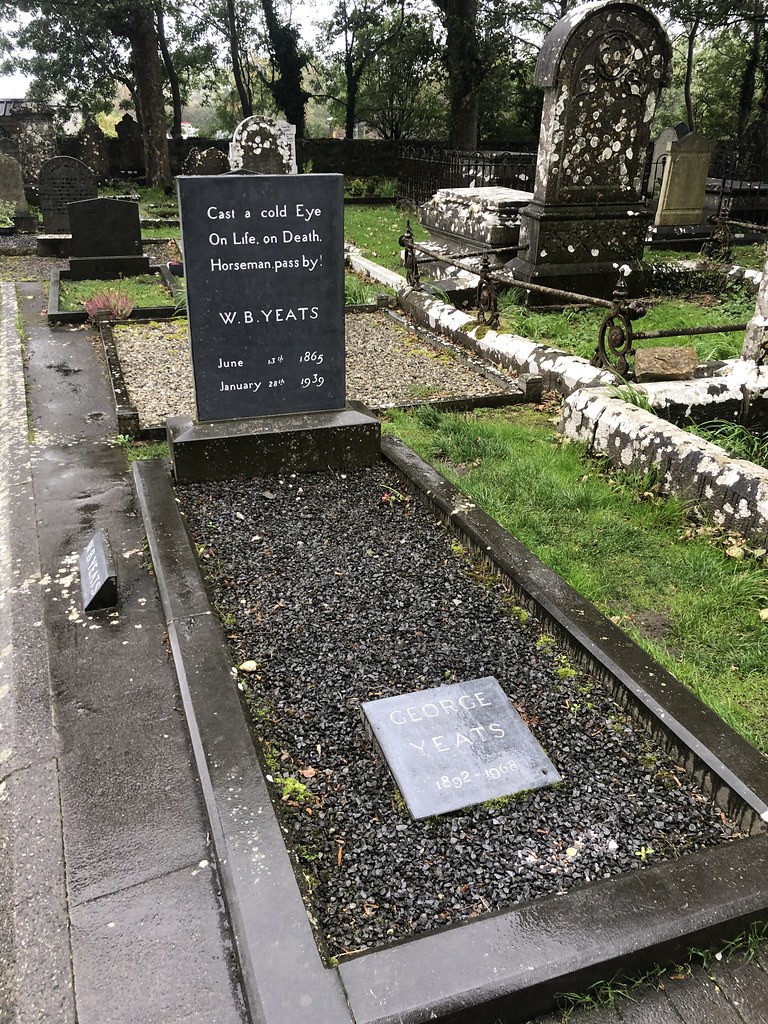 We drove through the hurricane, it was crazy windy which slowed us down, but we arrived safely at the beautiful Castle Leslie and were happy to have a seat in the pub and order some snacks. 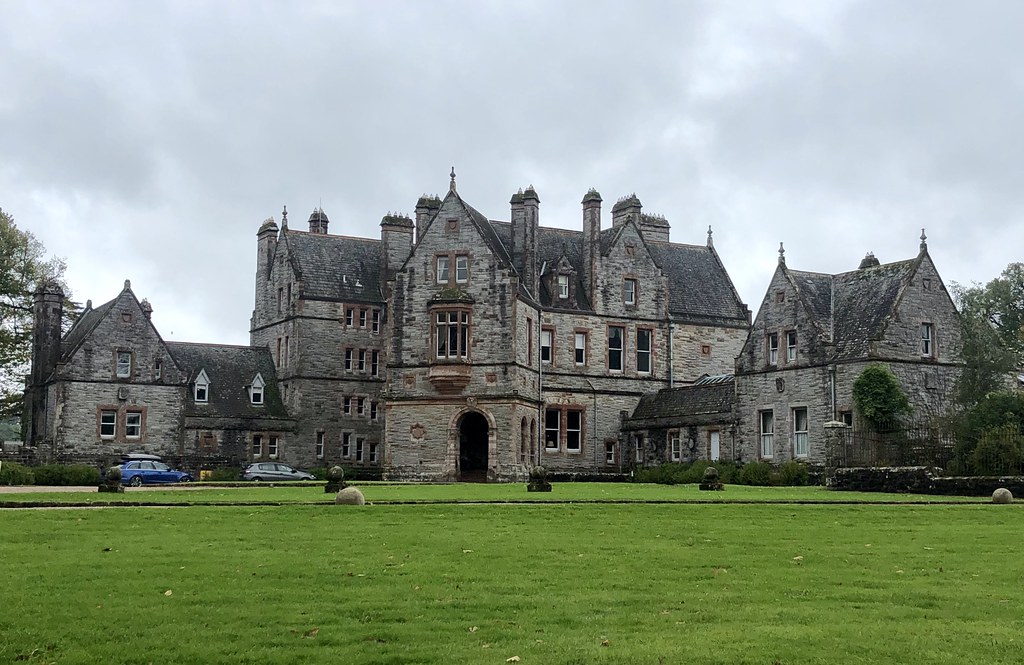 Castle Leslie, which the Leslie family has resided in since 1660, is now also a 5 star hotel. It's located in County Monaghan which sits on the border of Ireland and Northern Ireland. Our food in the pub was basic at best but once we started exploring the main castle we were in awe of the plush surroundings. 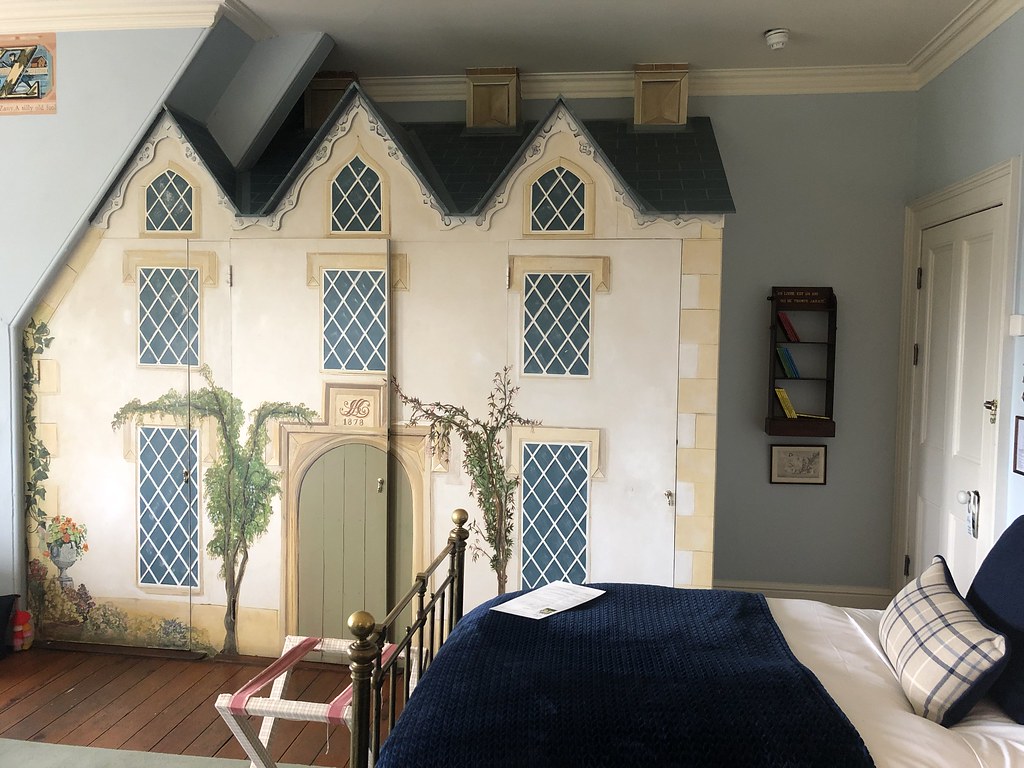 We had a triple room at the top floor which use to be the nursery. Fitting. The room was hysterical with the toilet and shower hidden behind doors resembling a dollhouse. There was an actual dollhouse on the fireplace mantel that was a replica of the estate. It was all very meta and we were having a great time!
Having dropped our bags we thought of exploring the grounds but the wind and the rain were lashing as they say. We opted to stay inside. 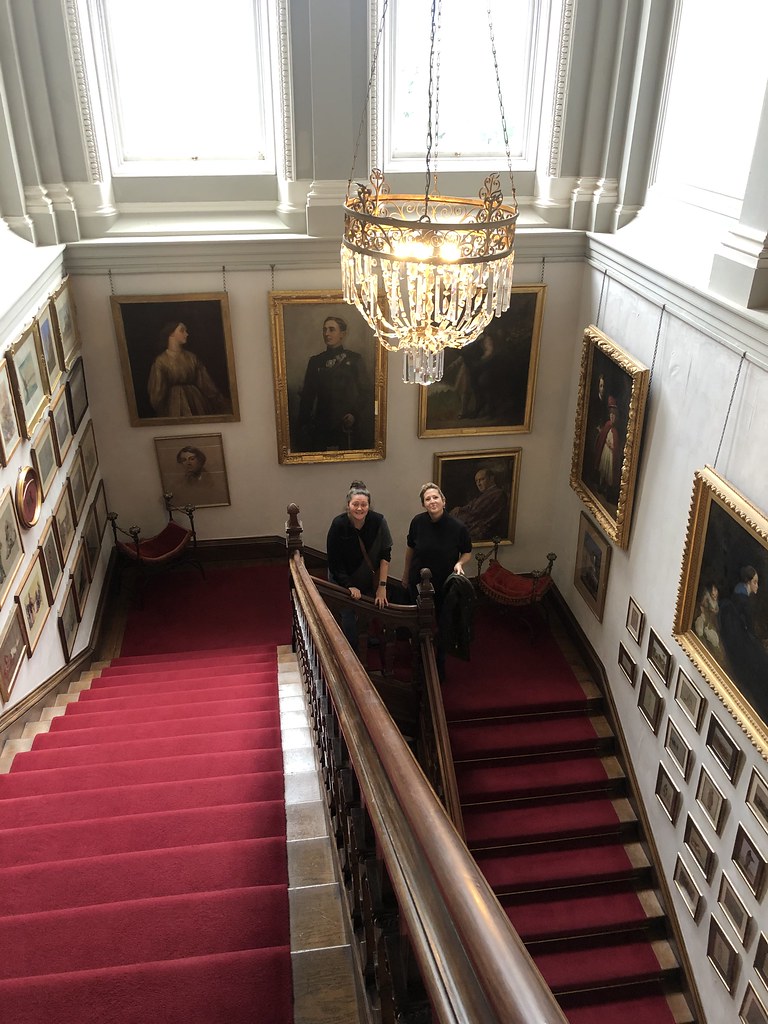 There were multiple rooms, almost semi-private, with plush furniture and cozy fireplaces. We settled into one and a bartender asked what we would like. We decided that day drinking in the safety of our castle while a hurricane battered on the doorsteps would do just fine. 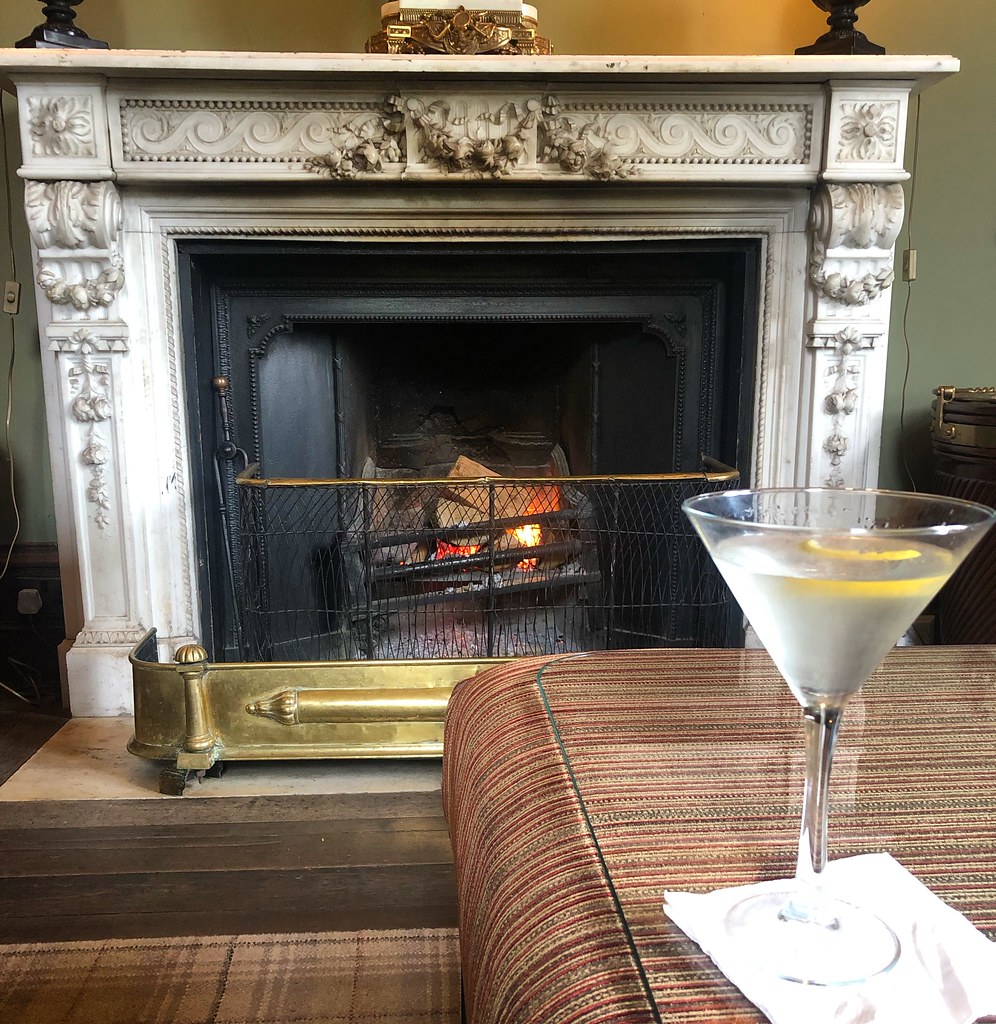 Originally we had made reservations for falconry but the weather had put a stop to that. So we hung out and had a great time just lounging and chatting away. For dinner we were driven by minivan back to the pub, which was still bad. We didn't learn until later that there actually is a nice restaurant on the property. It was a big disappointment but the hotel made it up to us when Nicky emailed them a few days later by refunding some of our rate.
After dinner there seemed to be a lot more people in the castle and when we chatted with a few in the bar they told us their friend had rented the entire estate out the next night for his birthday party. Boss! 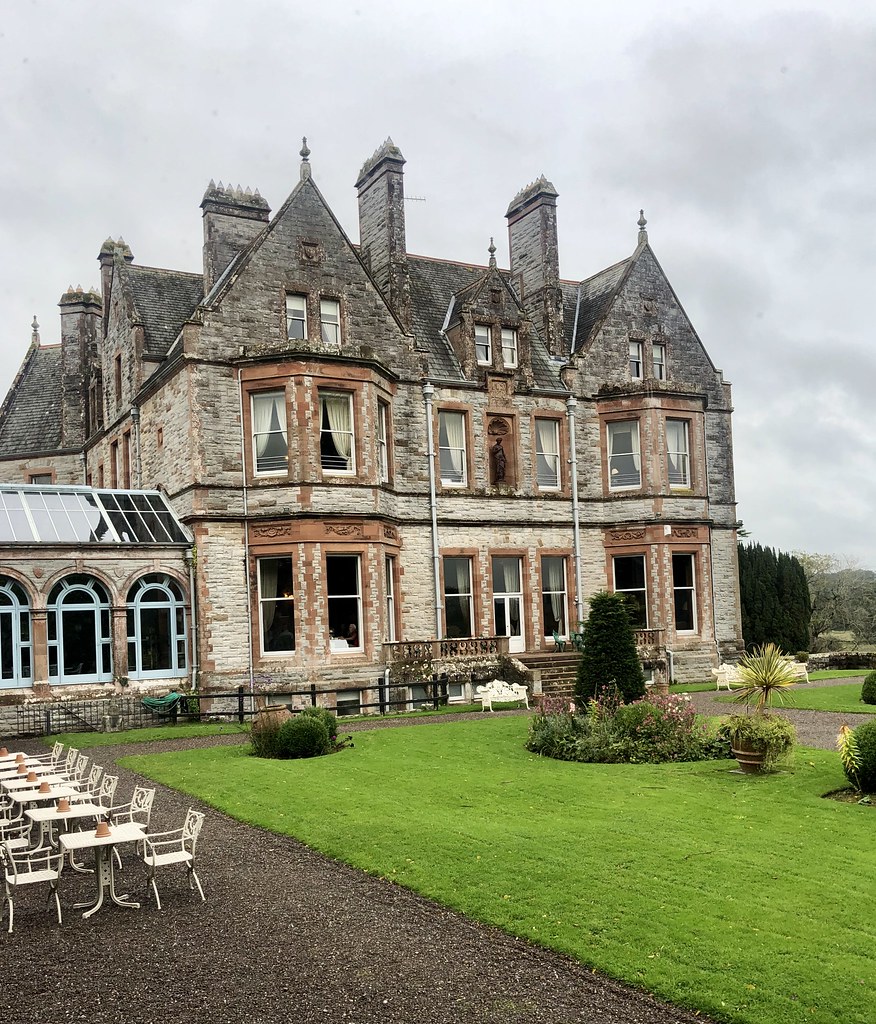 In the morning we were on the road again to Drogheda, Nicky's hometown is just north of Dublin.  We arrived at her mom's house in time for lunch, her mom had gone all out making a ton of food. It was great to be in staying in her house for the last two nights of my trip.
The next day Nicky's sister Laura and her husband Mark picked us up for a tour around the area. First stop was this crazy place called Gravity Hill. At the bottom of a slight incline you can put your car in neutral and it will BY ITSELF go backwards up the hill. It's crazy and good fun!
Next was a visit to the Long Woman's Grave. It was raining really hard so we didn't spend a lot of time reading the story outside. I looked it up later and found that it's a bit of folklore about a supposedly 7-foot tall Spanish bride who dropped dead at the realization of her husband's lie about just how much land he owned! 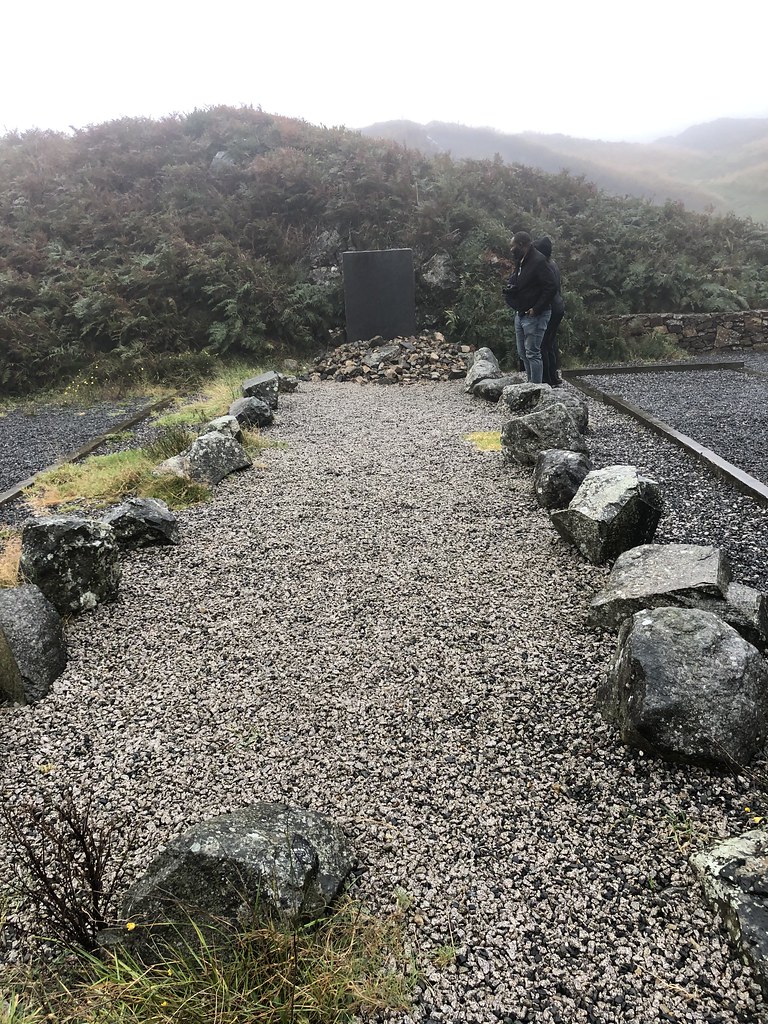 Our next stop was the seaside town of Carlingford, which is known for its oyster farming. We settled into Laura and Mark's fav pub in the area, PJ's for some great oysters and pints. Delicious! 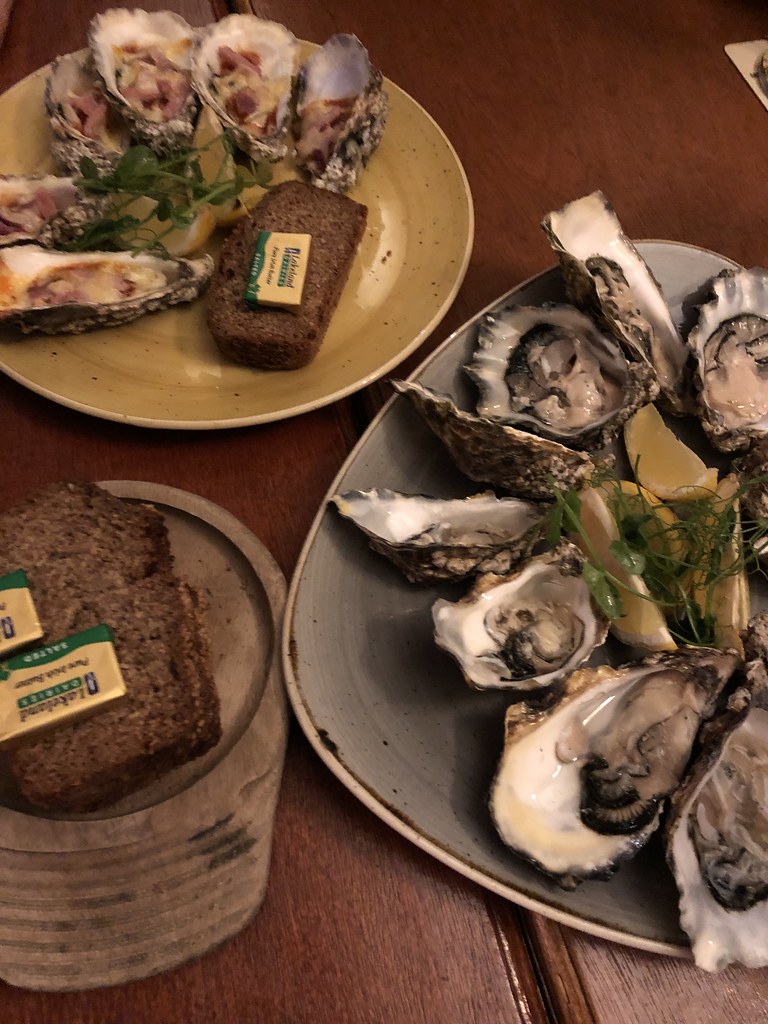 That evening Laura and Mark hosted a fabulous dinner party. Laura is an amazing cook, each course was so good! It was hard to believe she had spent the day showing us around and now was serving a gourmet meal for eight! 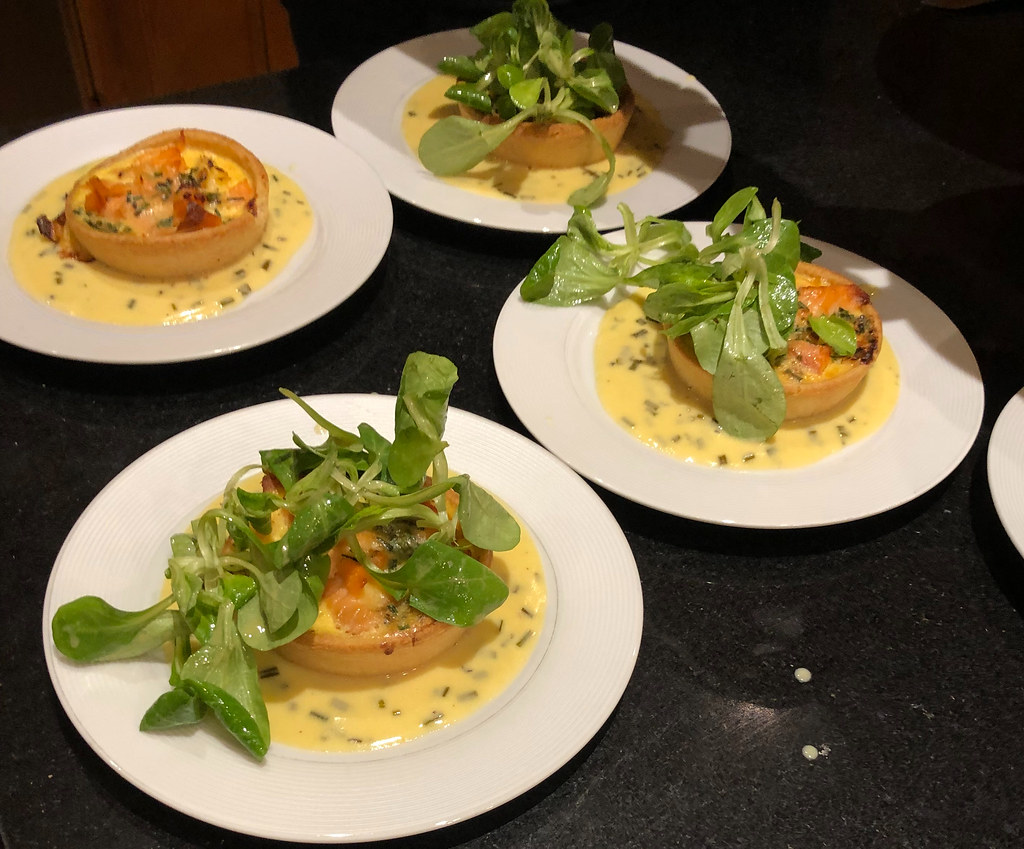 It was such a fun day and I absolutely loved meeting more of Nicky's family. They are a good bunch for sure! Great craic!
And then it was over! The three of us girls drove to Dublin airport the next morning. I dropped them off for their flight and went to return the rental car. I used my Priority Pass to enter and hang out in the lounge there. It was good, nothing special but a nice place to grab a drink and some snacks. I had time for some duty free shopping and then a proper sit down lunch.
US customs is in the Dublin airport so once you clear them you are considered flying domestic into the US. Strange but much easier. I was in Aer Lingus Economy Plus on the way home and I will say that I felt like I was a sardine! And that was even having the aisle seat. 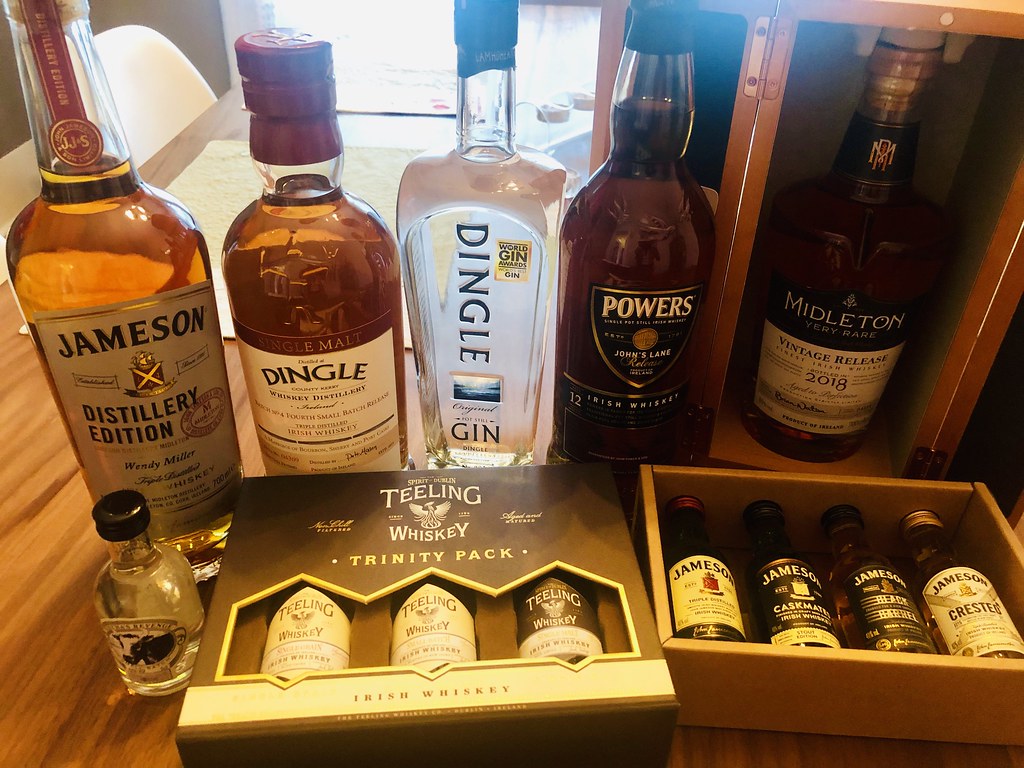 After 3 weeks in Ireland, and driving the entire circumference of the country, I was home. Ireland was one of the most fun trips I have taken! The people, the music, the food, the history, the beer, the whiskey, etc. etc! I loved everything about it.
**As I visited all of these places before the COVID-19 pandemic, please double check on opening hours. And fingers crossed these businesses all stay in business!**
Photos from County Sligo, Castle Leslie, and Drogheda here.
Other posts from this trip: