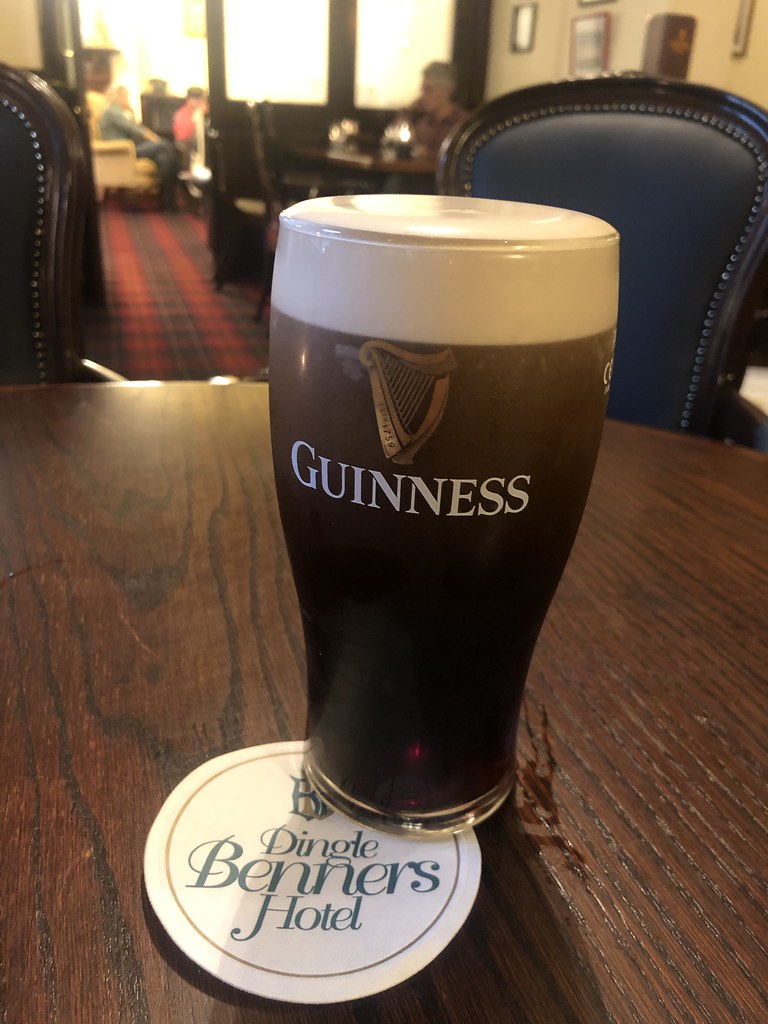 After the long drive around the Ring of Kerry I was very happy to park my car and check into the Dingle Benners Hotel.  They put me into a very large room by European standards, with king bed and good sized bathroom. I was staying in Dingle for 3 nights so it was nice to have room to spread out.
I also took advantage of their laundry services and left a bag for them to take that evening. It was going to be nice to have a suitcase full of clean clothes again as I was on day 9 of my trip. 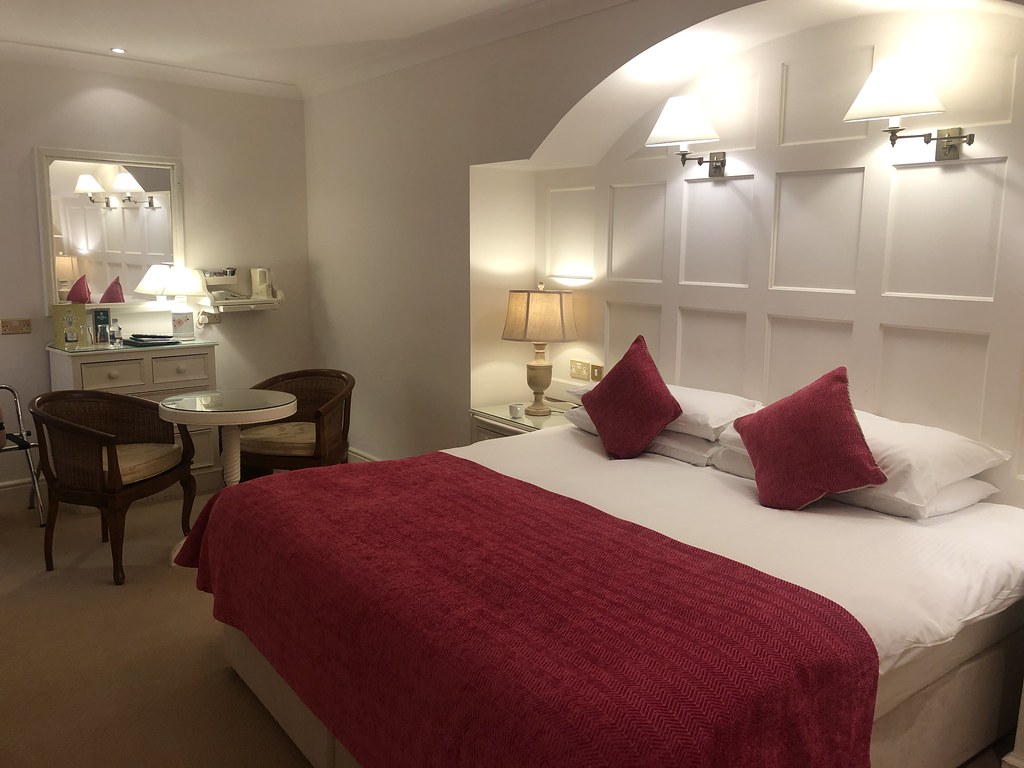 The hotel is 100+ years old and not all rooms have lift access; the staff is very happy to help with luggage however. There's a comfy bar right off the lobby and as soon as I dropped my bags I was more than happy to relax with a Guinness!
And not that Dingle is big, cuz it isn't, but the hotel is very central and easy to walk everywhere. I would not have to take my car out of the included parking spot until I left! 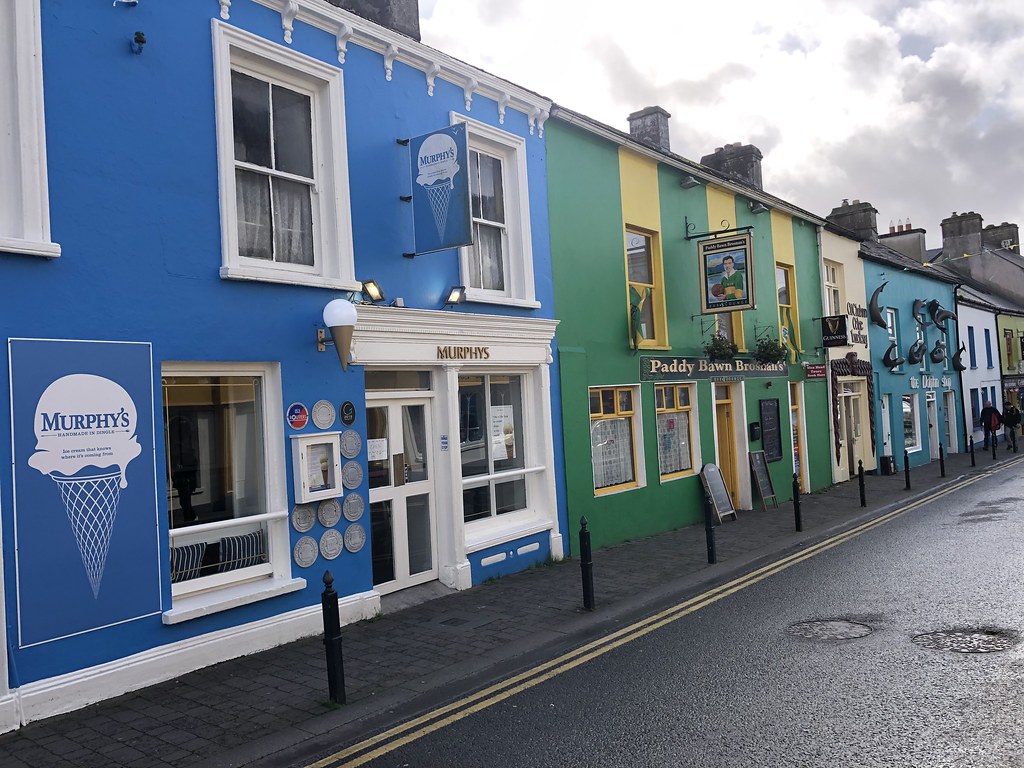 Dingle is such a cute and cheery town. It's laid out in a triangle shape, basically making it impossible to get lost! Armed with some recommendations from the front desk, I took myself to dinner at Fenton's for some delicious local mussels before grabbing a seat at the bar at John Benny's Pub for some excellent music.
John's wife Eilís played and she was awesome! I just loved the vibe in this pub, great music, service, and super fun people! It was an excellent first night in Dingle!
The town is perfect for wandering around and getting some shopping in. There is beautiful cut crystal to be found in Dingle but I talked myself out of adding to the sizeable glassware collection I already have. I did not talk myself out of purchasing some lovely Irish cheeses from The Little Cheese Shop however. 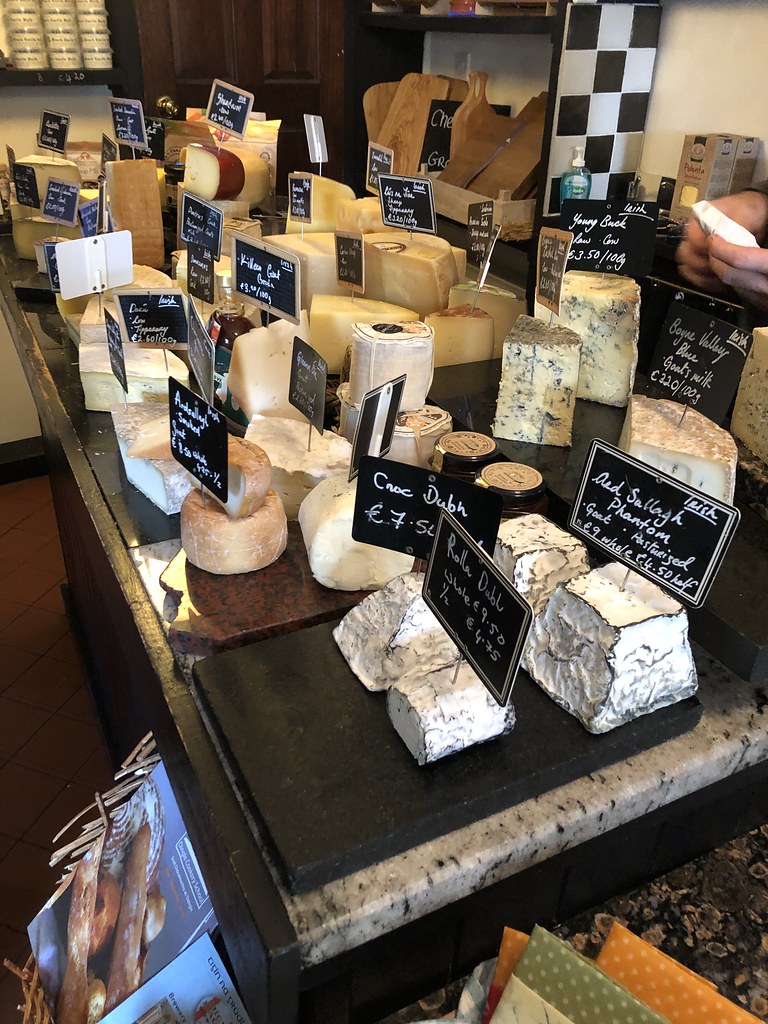 The woman behind the counter helped me pick out an assortment of cheeses; some I'd take to share with Nic and Forest, others I'd snack on in the car. It's a great shop and they have all sorts of delicious things!
More delicious things can be found at the uber popular Murphy's Ice Cream which has interesting flavors such as Dingle Sea Salt, Irish Brown Bread, and Dingle Gin. That's my kind of ice cream! 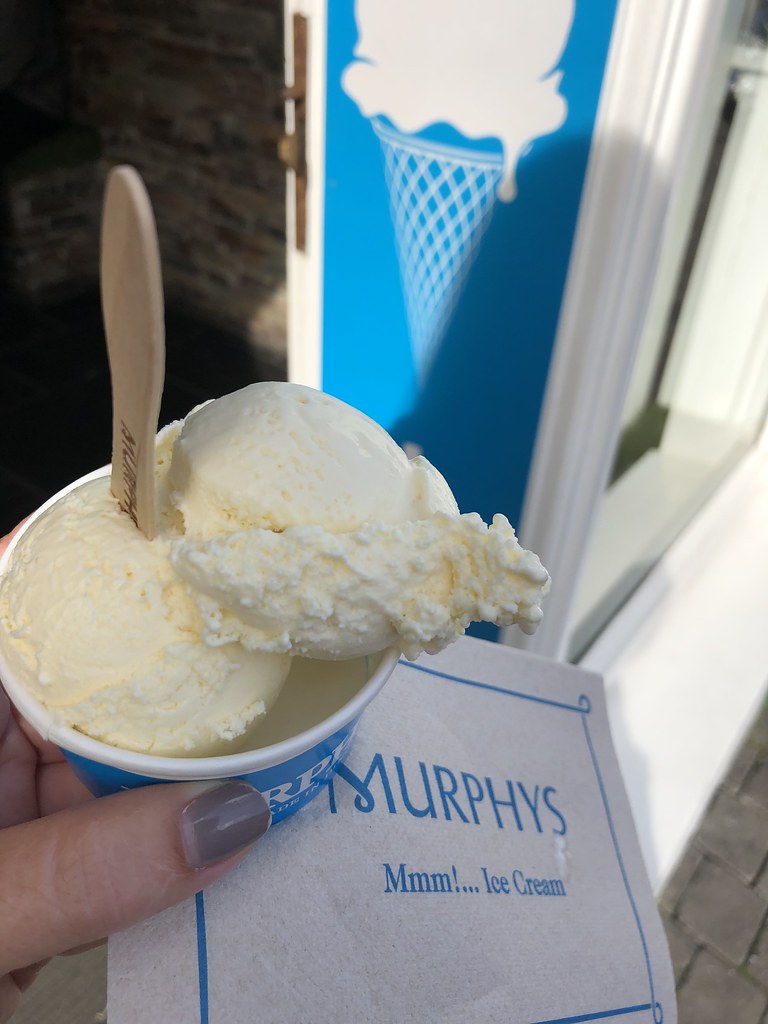 Dingle has its own resident dolphin who frequently hangs out in the harbor. I didn't see Fungie but my stroll around the waterfront was still very enjoyable. Absolutely beautiful scenery here. 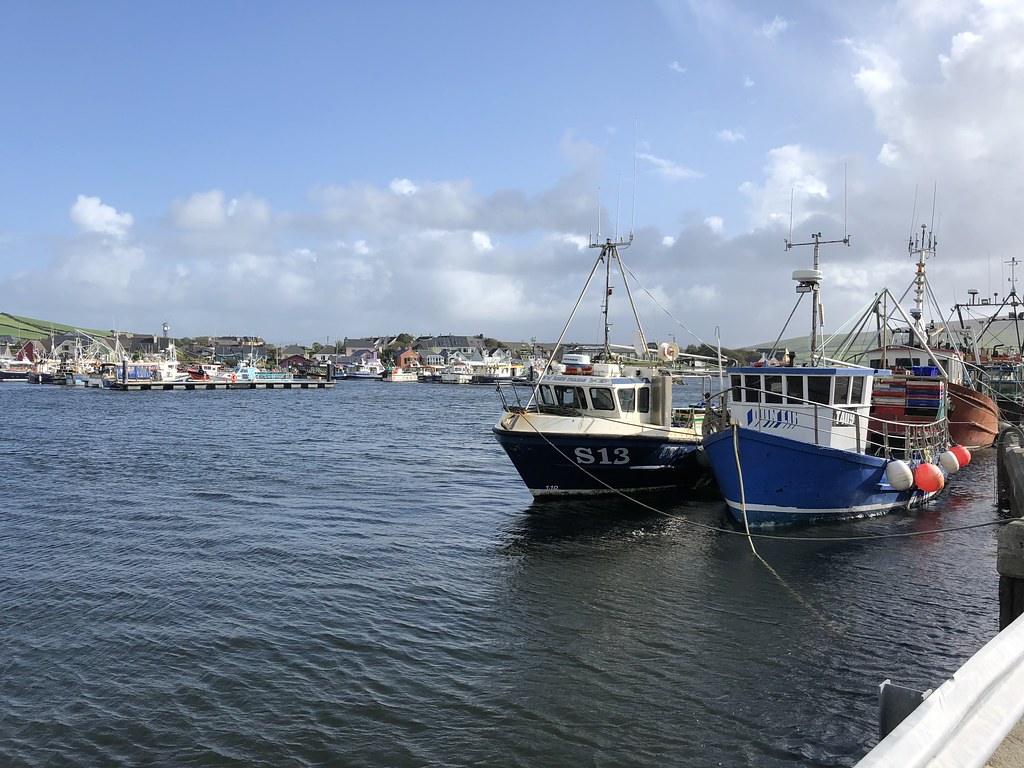 I had heard there was a farmers market on Fridays so was very happy to stroll over in the sunshine. Unfortunately there were just a few bags of potatoes and a couple of craft tents. Peruse if you happen to be there but don't go out of your way.
What you should go out of your way for though are the Harry Clarke stained glass windows and other exhibits at the Diseart Cultural Center. 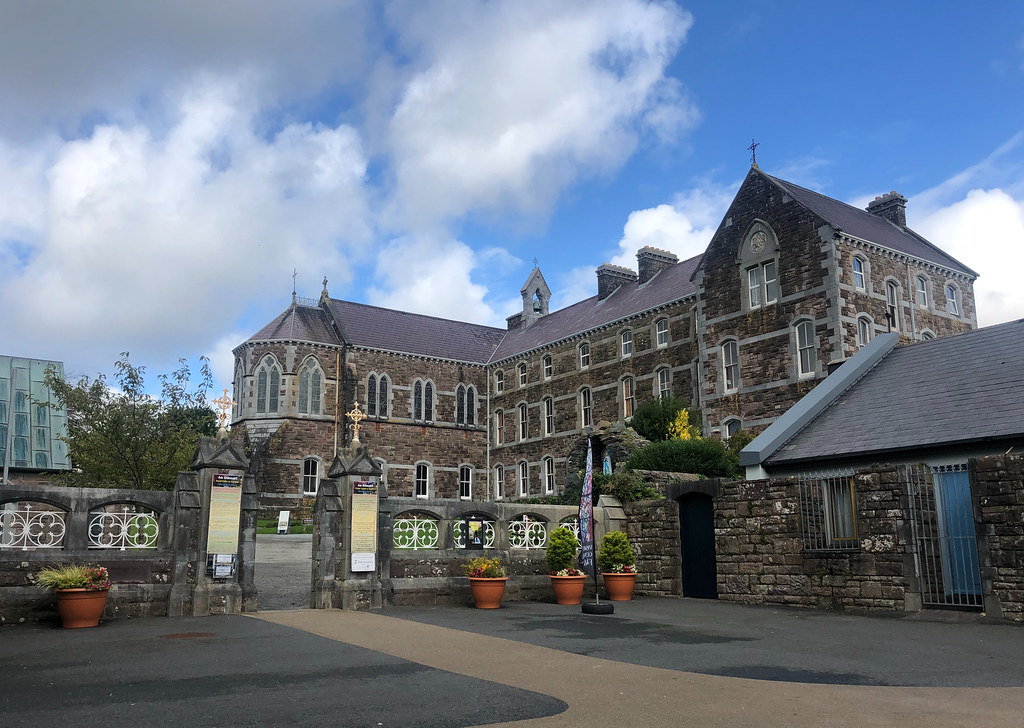 One ticket price gets you free range to explore the former convent. My first stop was to the fresco of The Last Supper. In this rendition the artist, from Colorado in the States, painted locals in for the apostles and the surroundings are that of the Dingle Peninsula. I thought it was very clever!

Next I went into the chapel to view the stained glass windows. Harry Clarke was considered the top artist of his kind when he was commissioned in 1922 to create the 12 pieces of art. 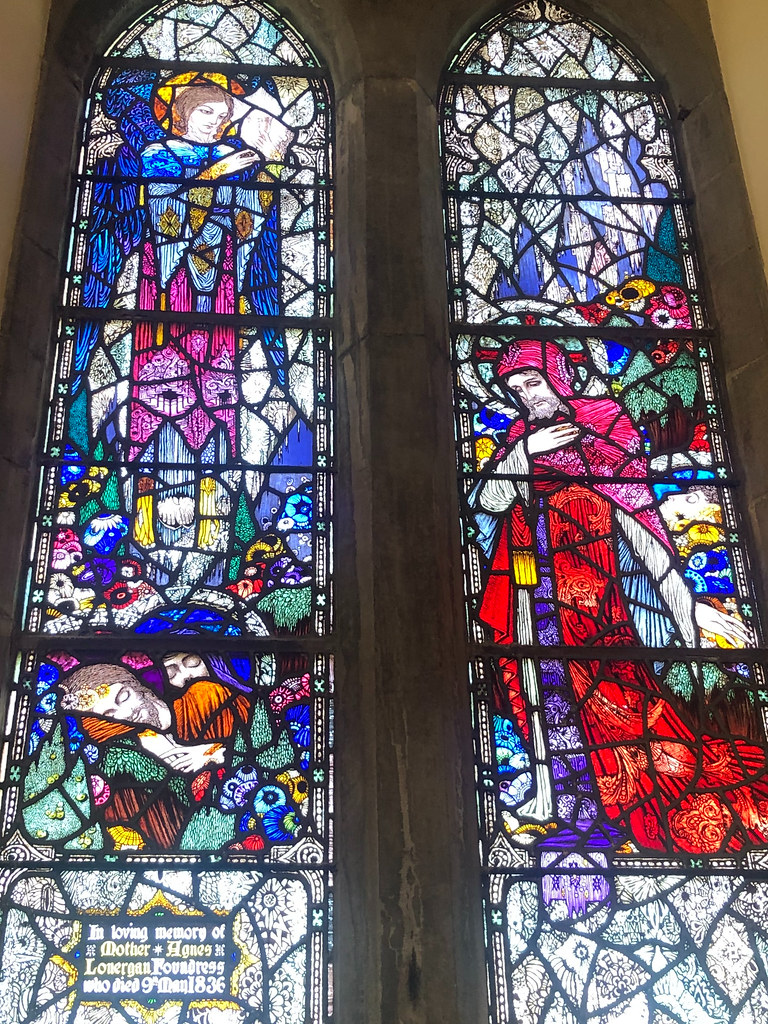 The colors are striking, especially with the sun streaming in. It's a beautiful chapel and the windows are intricate and very beautiful.
In a small space which use to be the Sisters’ community room there are a series of portraits of Nano Nagle who founded the first convent in Ireland.
The gardens are gorgeous and great for wandering around, I saw a few people enjoying picnics. I absolutely loved exploring through and around the Diseart Cultural Center; you can't miss it as it takes up most of Green Street. 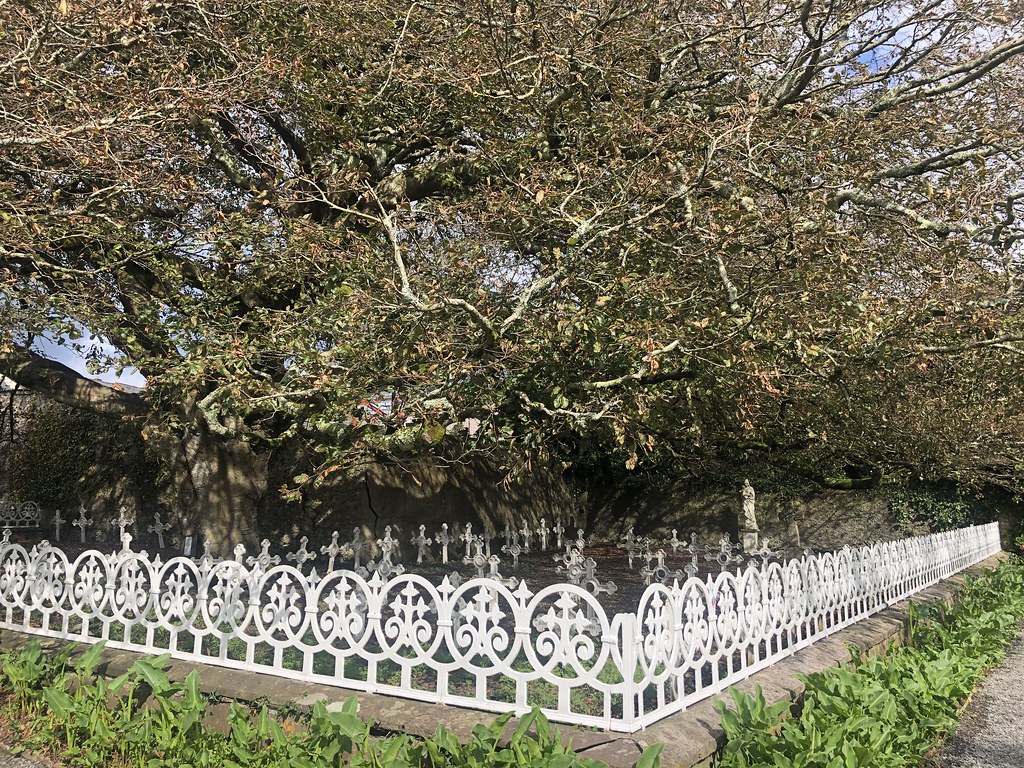 At the far west side of town the Dingle Distillery is making whiskey and gin, is there any question about my visiting? There are only three tours a day at set times so it is important to make a reservation if you are interested. I walked the 1 mile which just took about 20 minutes from the Dingle Benner Hotel. 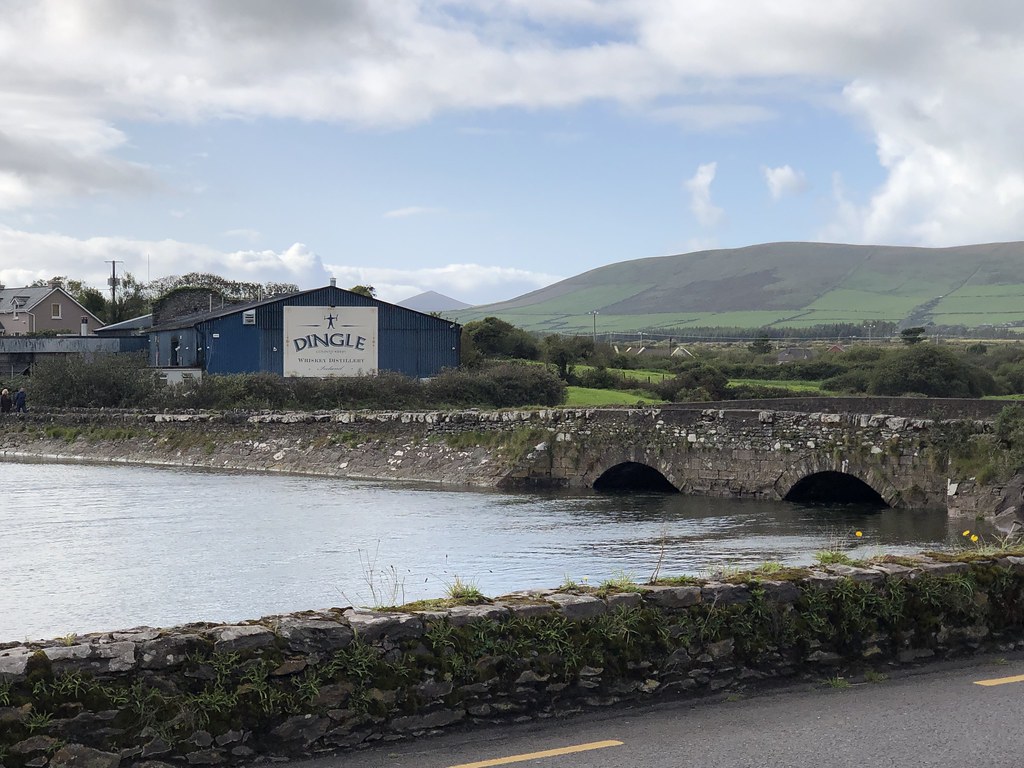 The tour was interesting with stories of local support; they are still a pretty young distillery having only released their first whiskey in 2015. 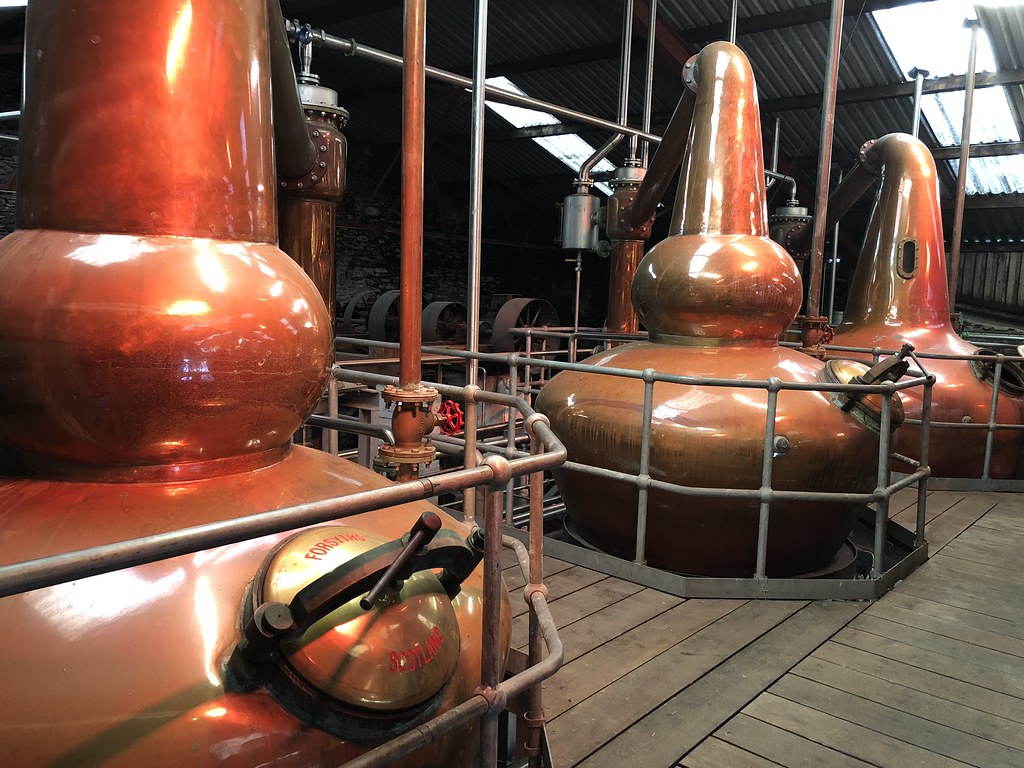 We started with a taste of the gin, then a tour around, and finished with a tasting of their current whiskey lineup. Pretty great for €15! The gin is available at Dublin airport duty free for a bit less, the whiskey is not at duty free.
There were a lot of choices and recommendations for eating in town but I was possibly most excited to try Reel Dingle Fish, a modern chippy right in the middle of town. An actual hole-in-the-wall! I got in before it was too busy and had some delicious cod and chips while sitting at the counter. It was a HUGE portion! 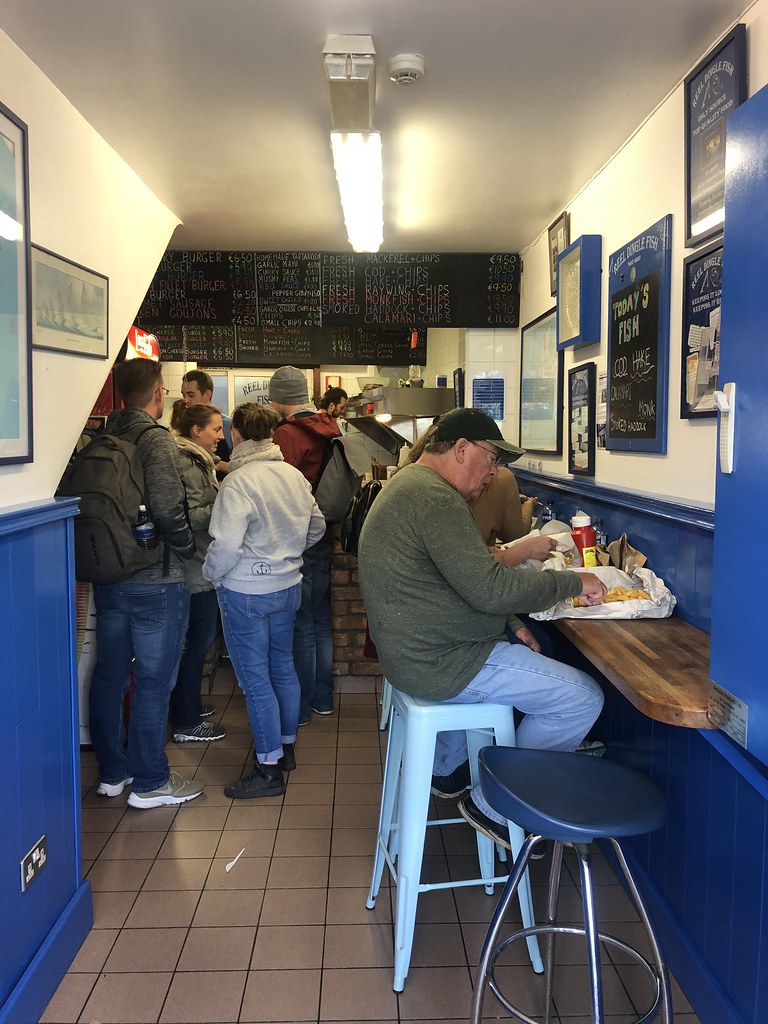 One afternoon I had a late lunch of pot pie and a pint across from my hotel at the Dingle Pub. It was fine, but I wouldn't recommend with so many better options. The music line up they were promoting was also really geared towards tourists so if that is your thing you might want to check them out in the evening.
At Out of the Blue, which is right across from the waterfront, I treated myself to oysters and lobster, fresh from Dingle Bay. It was absolutely delicious and I'd absolutely recommend making a reservation for this popular and busy spot! 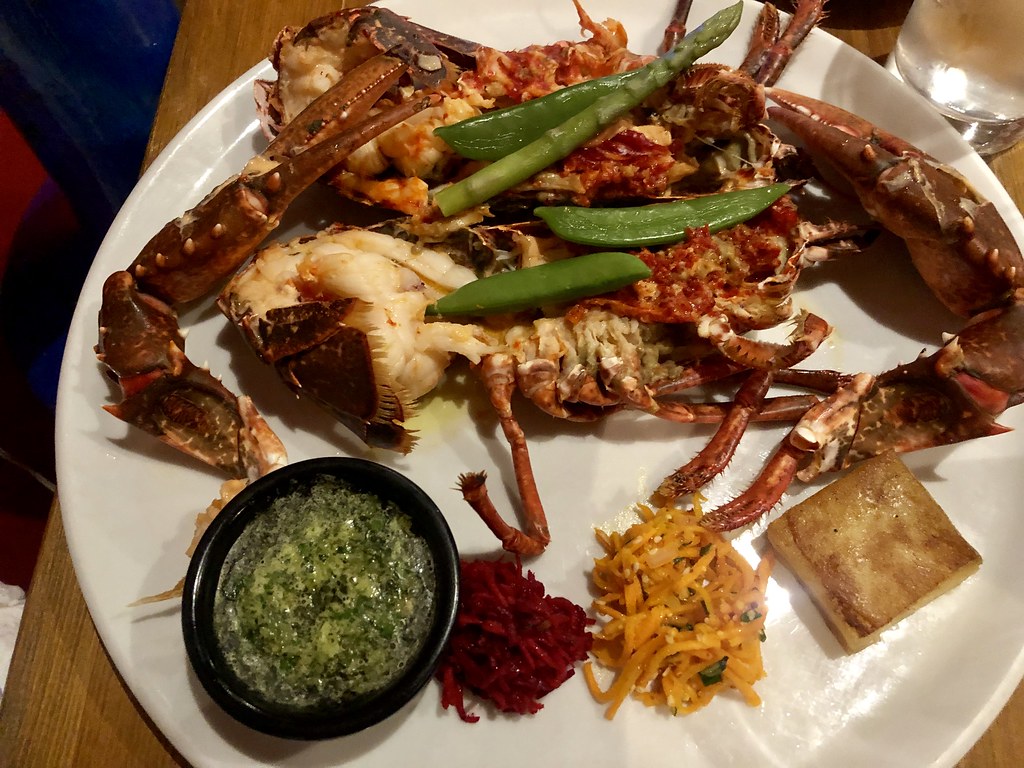 Another evening I had oysters again but this time with steak and scampi at Ash's Restaurant. The food was excellent at this local favorite which also has a great bar. And I was able to taste their special Founding Fathers bottling of one of the Dingle whiskeys that I had learned about at the distillery. An excellent dram! 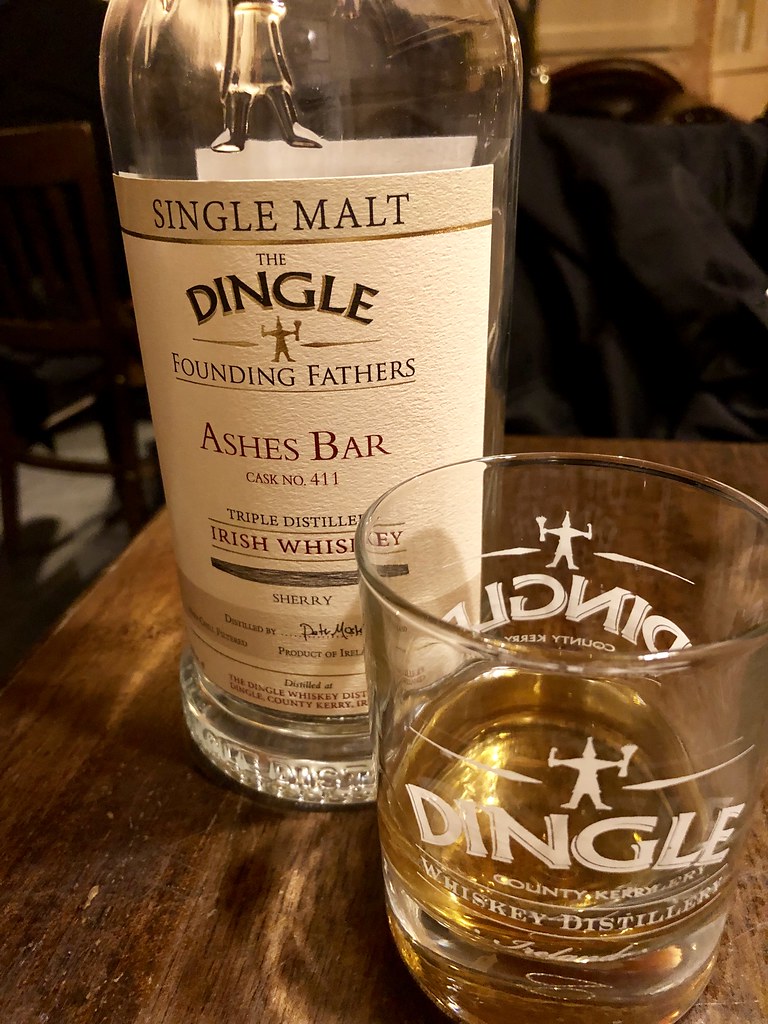 Without a doubt Dingle had my absolute favorite bar/music scene. So. Much. Fun! I already mentioned John Benny's for good music and on another night I wandered into O'Flaherty's on Bridge Street. 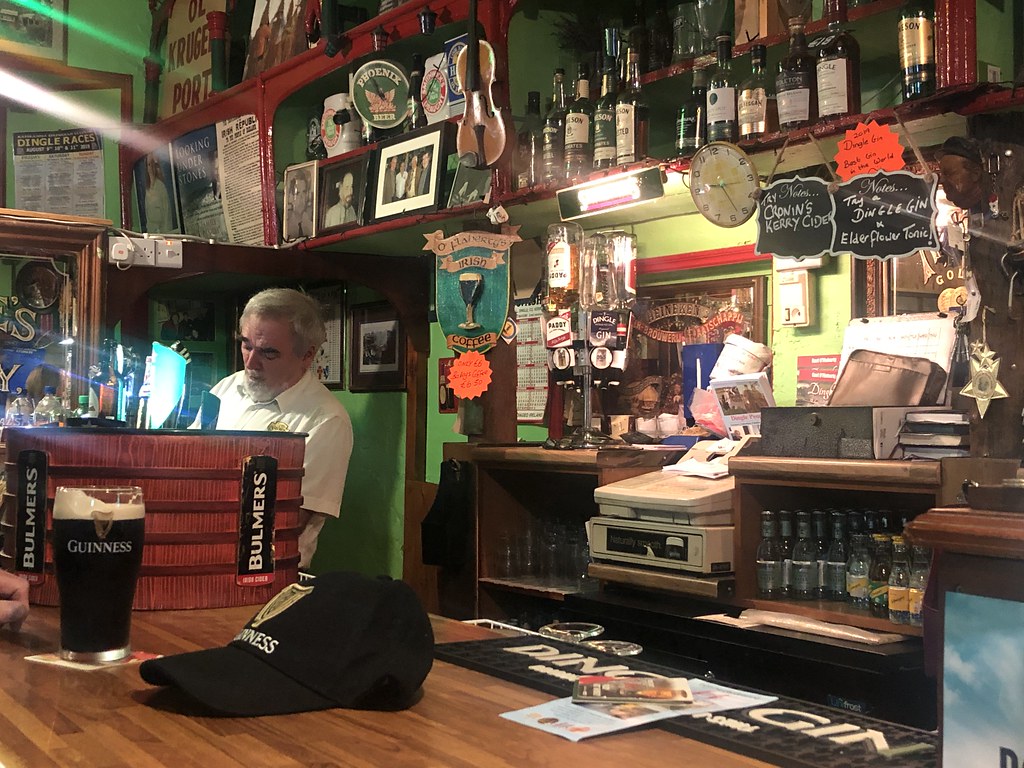 Here the owner Fergus Ó Flaithbheartaigh poured my pint and then sat with his musicians and played a session. Fergus plays a few different instruments and the sets were very tradition tunes, which was fine by me!
The night I stopped into the Courthouse Pub the music wasn't traditional, nothing wrong with that but I was in Ireland for Irish music! It was still fine for a pint before heading off.
Some of the pubs in town have historically also been hardware stores, mercantiles, haberdasheries, or the like. So seeing the front windows stocked with tools and such can be puzzling, but step inside the likes of Dick Macks and you'll be very pleased with the overflowing shelves of some incredible whiskeys from around the world! 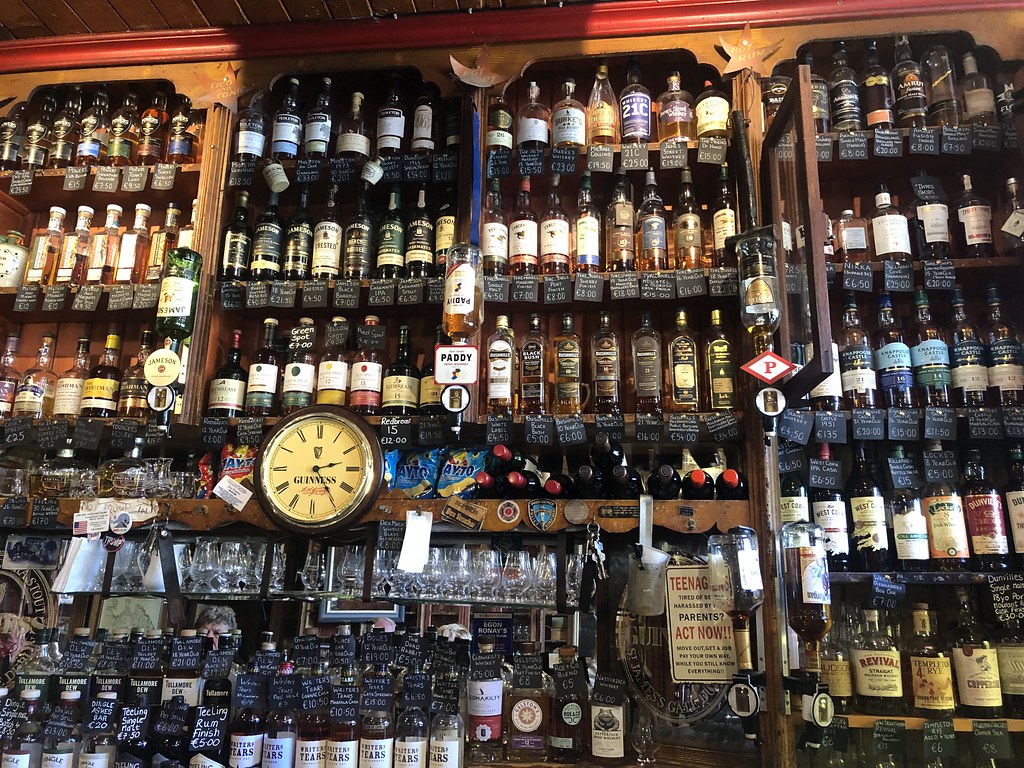 Many of these old pubs also still have a snug up front. These semi-closed off areas were for ladies as it was not proper for them to be sitting at the bar (even if their husband was!). 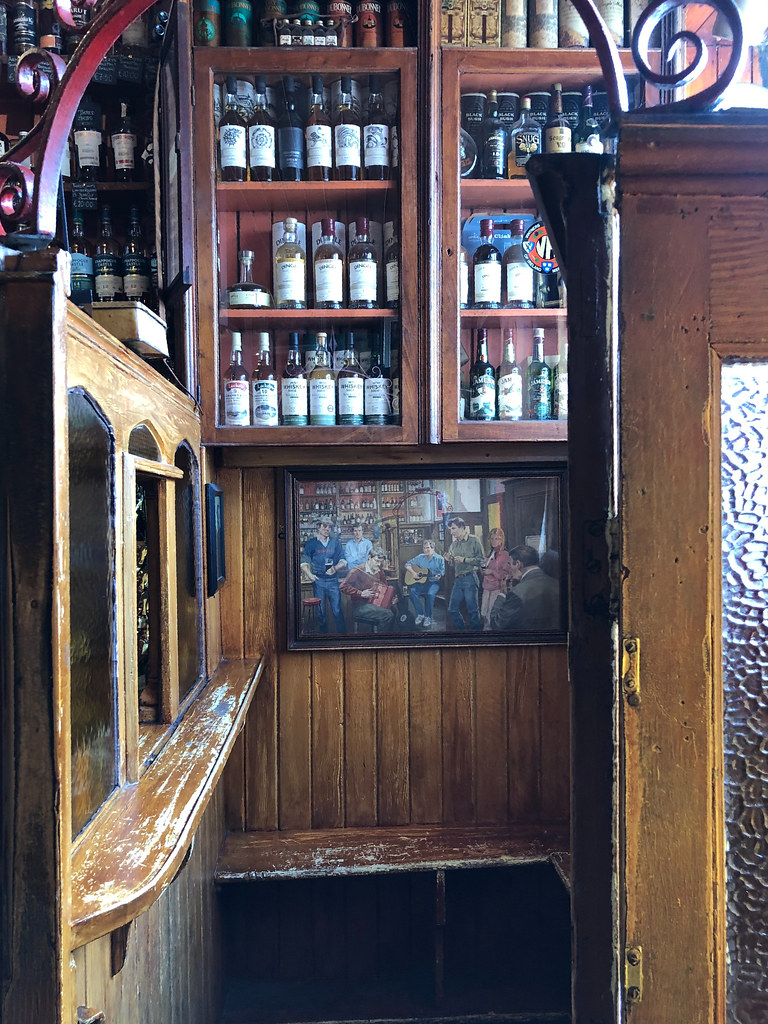 Another interesting thing is that pubs in Ireland close right about midnight! One evening after listening to some music in another bar and leaving as they were closing, I passed Foxy John's Hardware/Pub. There seemed to be people still inside even though it was late so I took a chance and walked in. 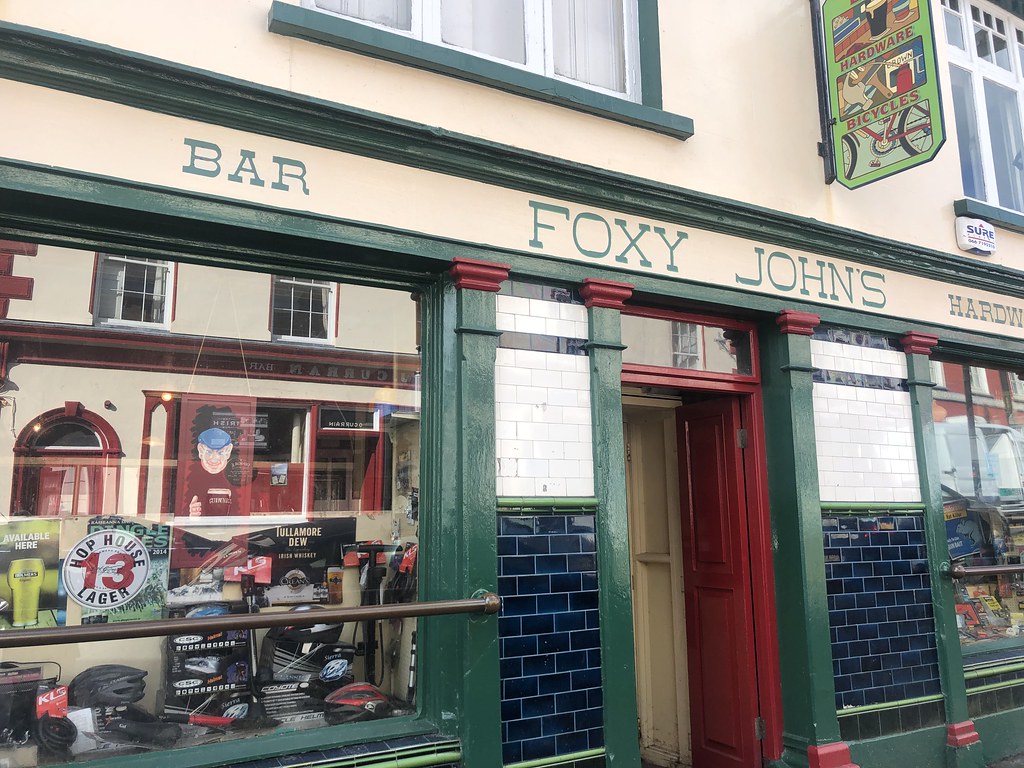 The bartender hesitated for just a minute before pouring me a Jameson and the three local guys at the bar started chattering away like they had known me forever. They took turns buying rounds until 2am (I did try to get one as I had been told it is very bad form not to reciprocate!) I had such a blast with these locals and was very touched that I was let into their "lock-in" as after hours drinking is called (the bar doors were literally locked).

With Dingle being so small, three nights may seem like a lot. But I found lots to do and really found it to be the most fun of all the towns I visited on the solo part of my trip so I was very happy to have stayed around a bit! 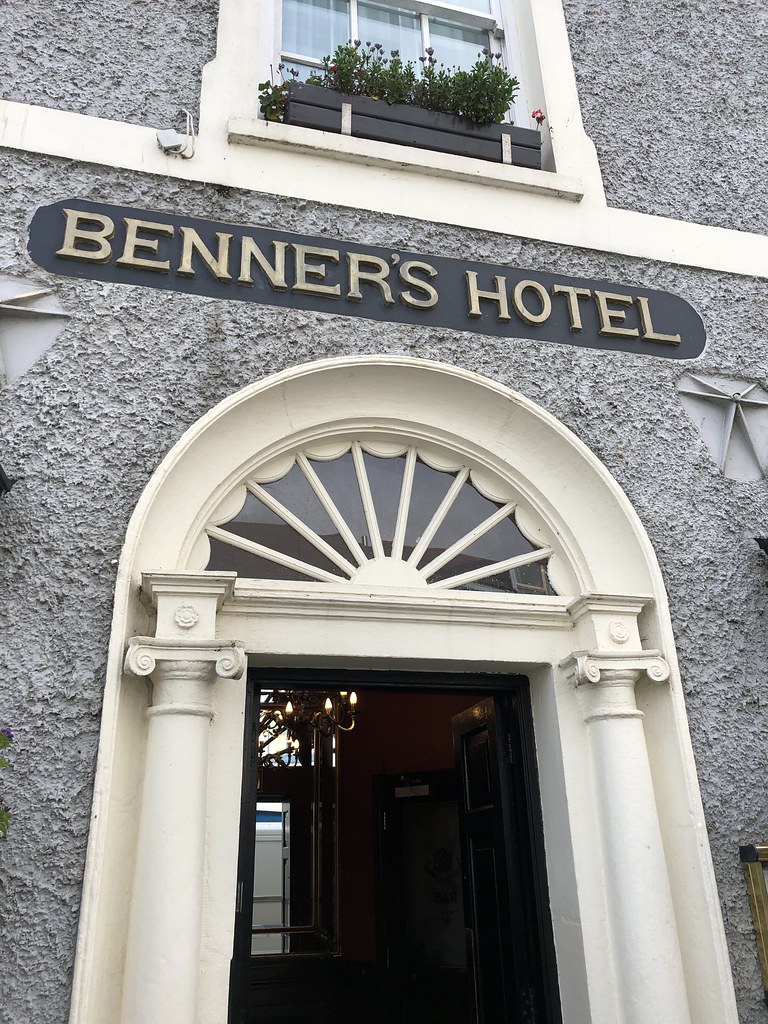 *Thank you to Dingle Benners Hotel for providing me a special rate for my accommodations including complimentary breakfast, however all opinions are my own.*
**As I visited all of these places before the COVID-19 pandemic, please double check on opening hours. And fingers crossed these businesses all stay in business!**

All photos from Dingle and County Kerry here.