For such a popular destination, Dubrovnik is strangely sparse on great eating and drinking spots. Between Aaron and myself, we had compiled quite a list, and they were almost exactly the same and not very long. Granted, we didn't get outside of the Old Town walls to explore restaurants where more locals dine. I would definitely do that next time, but we were just exhausted each day after climbing all over the place!

Perhaps the most popular bar in all of Dubrovnik is Buza Bar. Marked only by a wooden arrow, on a stone wall proclaiming cold drinks, you'd think this little hole in the wall (the literal meaning of buza) would be a quiet respite from all the tourists. But you'd be wrong. 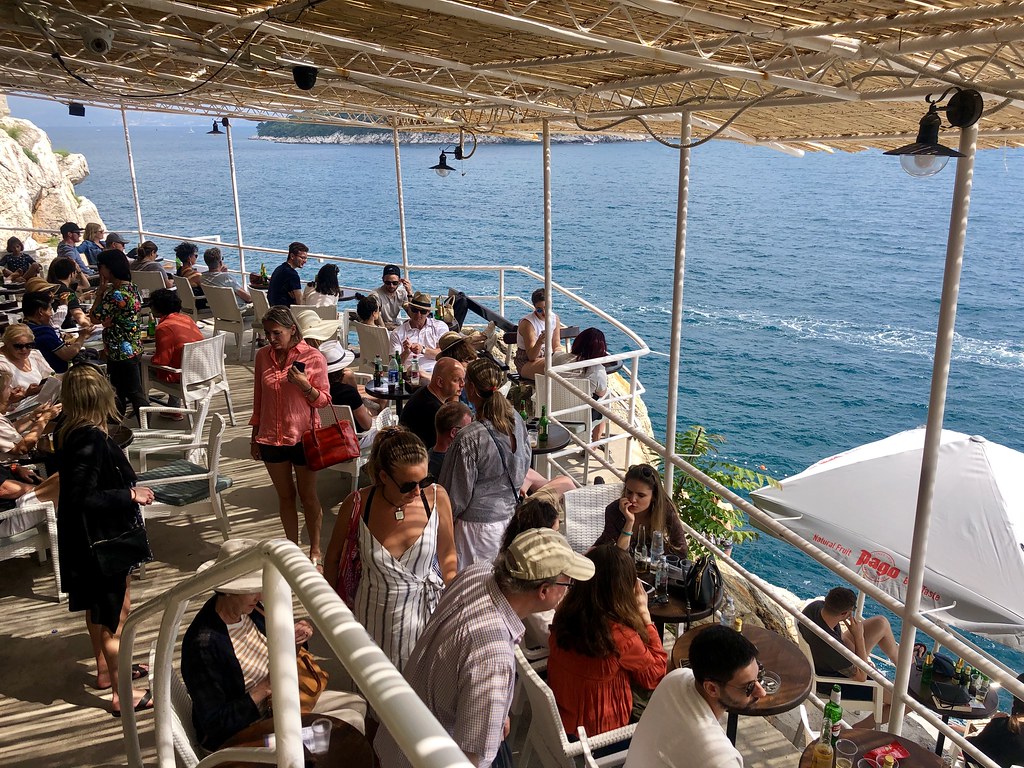 The bar, which is built into the cliff wall, was packed! It was quite a little party! There is no running water here so all drinks are from cans or bottles and the bar is cash only. Besides drinking you can jump off the rocks and go for a swim in the sea (there's a ladder for re-entry). Buza isn't fancy but it's a very unique and fun spot for a drink (or two in our case).

Another fun spot for drinks happened to also be another oceanview spot, Ala Mizerija. The open air bar looks over tiny Sulic Bay and Lovrijenac and is just outside of Pile Gate. You first pass Dodo Beach bar, which also looked cute with fun swings as chairs, as you walk to the edge of the low cliff. 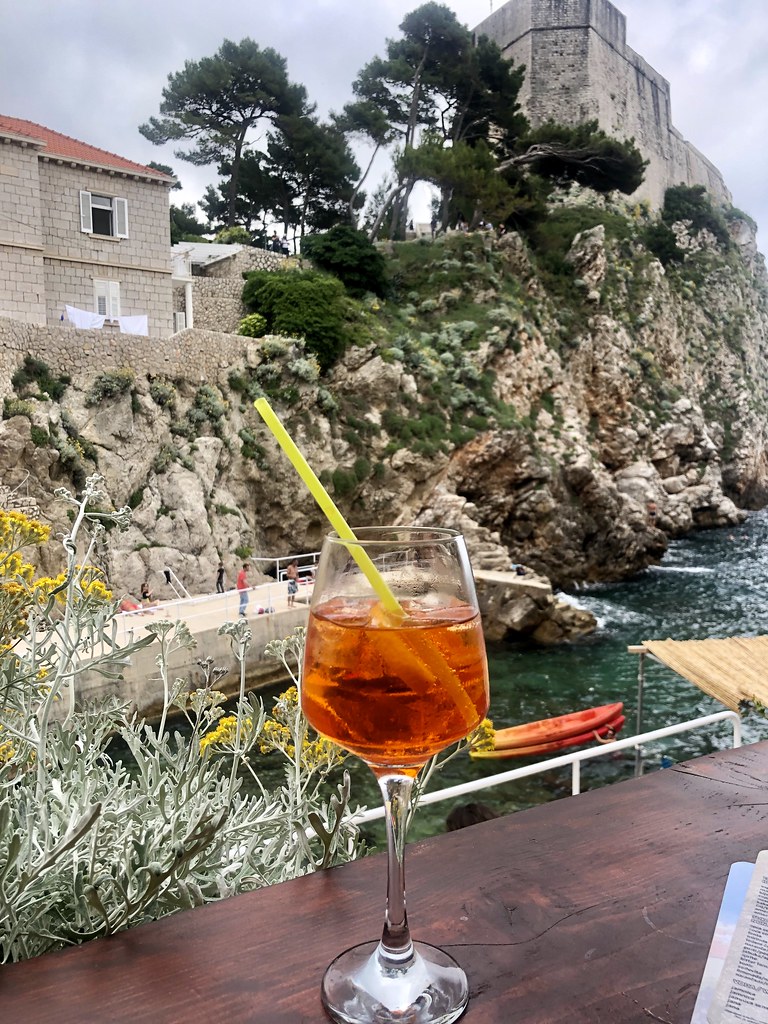 Ala Mizerija has a simple cocktail menu and also a good looking snacks menu. It seemed to have a lot more local customers and wasn't as crowded. This was a great find!

One evening, after Aaron had left town, I went on a cocktail crawl. I was excited to try a few places but unfortunately it was a bit of a bust. 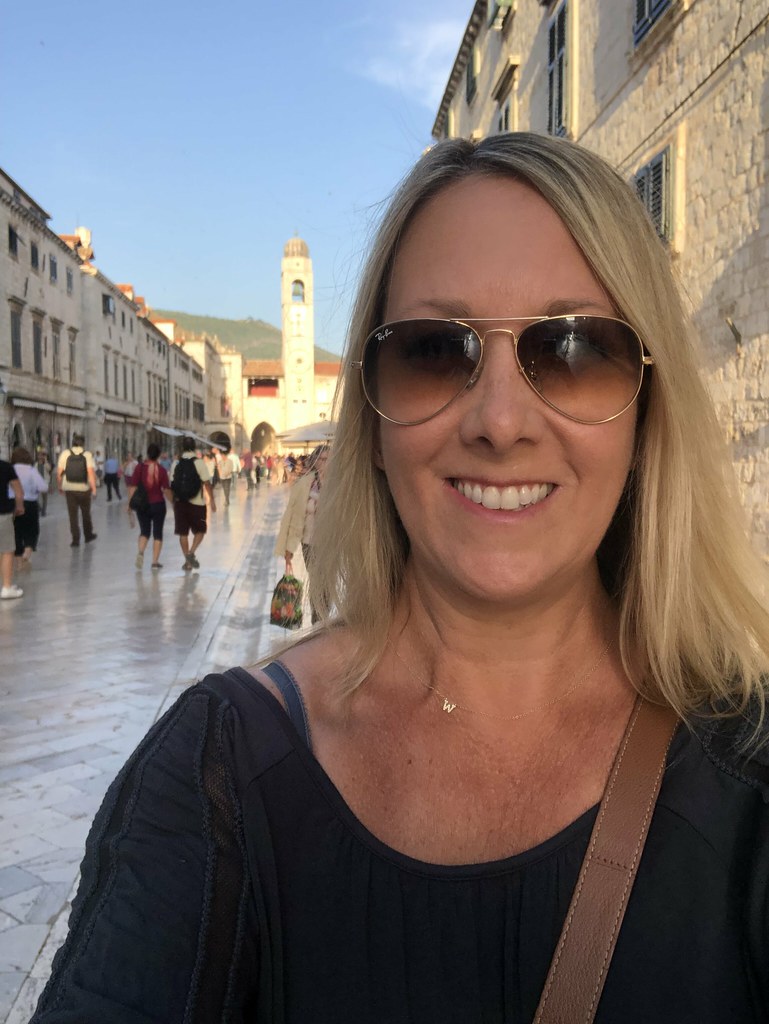 My first stop was Mr. Goodlife which was almost impossible to find because 1) it's a speakeasy and 2) it was closed. 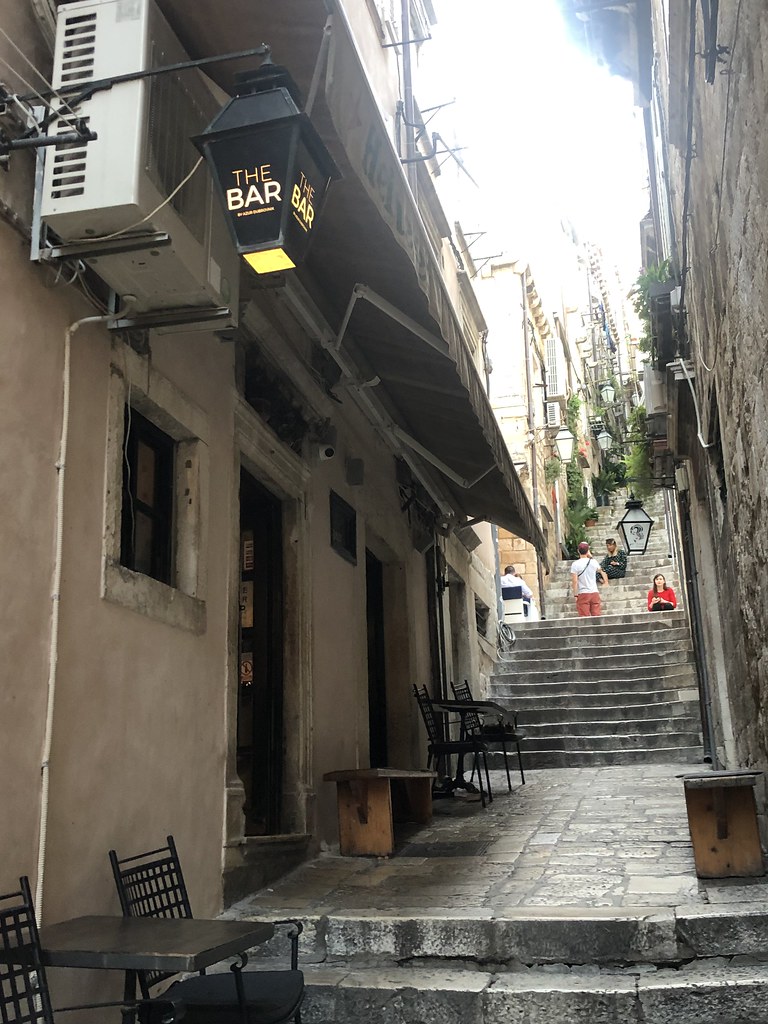 I made my way back to the main street, Stradun, and found The Bar by Azur up one of the stairway paths. I entered, expecting this to be a classic cocktail den as it was advertised on its website. It was completely empty. The bartender was rude when I asked for a menu, and pointed to a chalkboard which listed mojitos and rum cokes. I left without ordering anything.

Next stop, Buzz Bar, as recommended by the NYTimes. A basic bar with sticky menus, serving gintonics and the like. I ordered something, it was served to me, and a group of drunk people at the table next to me knocked it off my table. I took that as a sign and left!

FINALLY! I sat down at an outdoor table at Poco Loco. The drinks were inventive and delicious. The service was a dream. And the atmosphere was calm and beautiful. 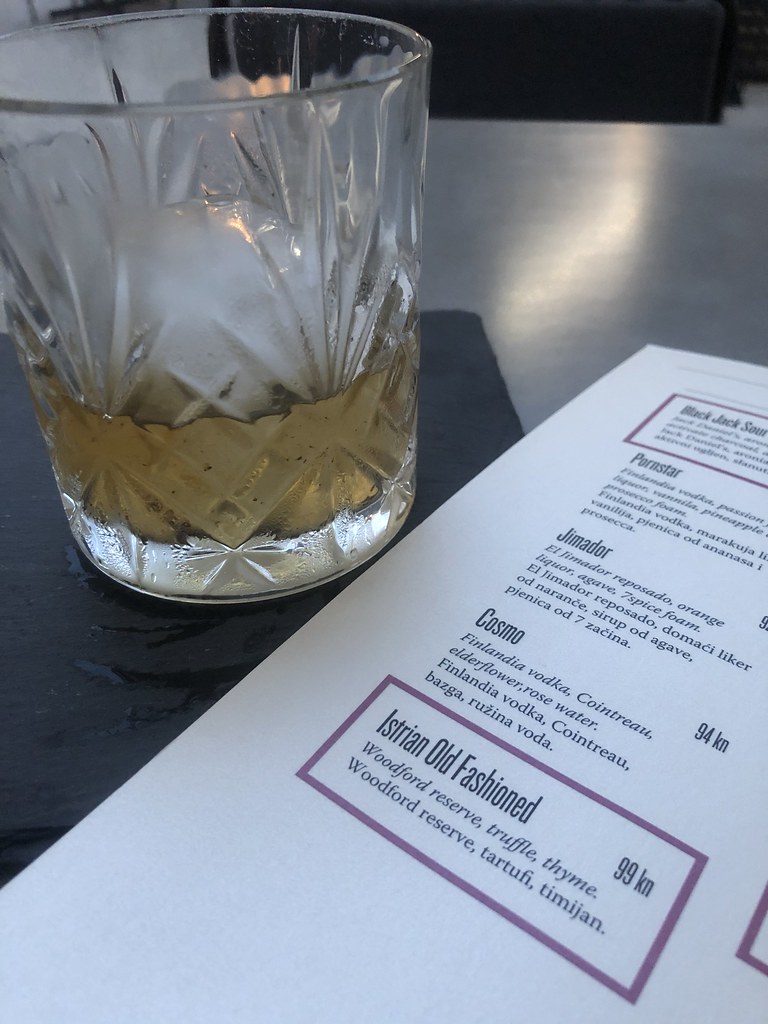 I stayed for a few rounds! 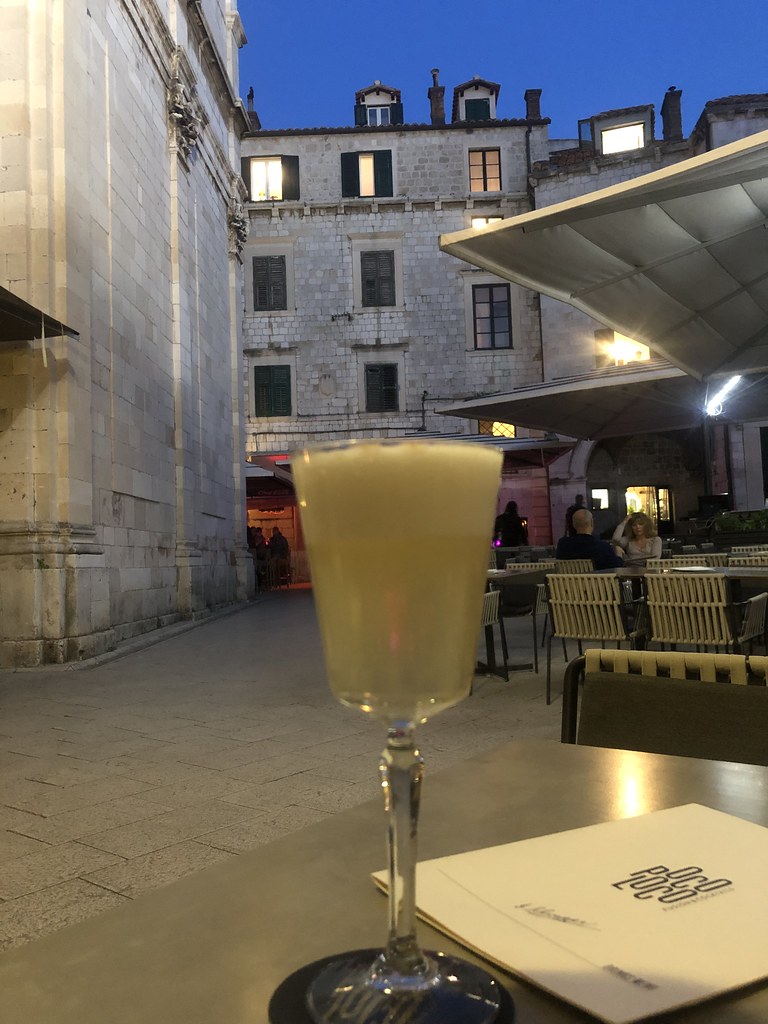 And of course I had a nightly cocktail at my hotel bar at the Hilton Imperial. The cocktails were delicious, the bar was stocked with some very good spirits, and they were always served with thoughtful snacks. 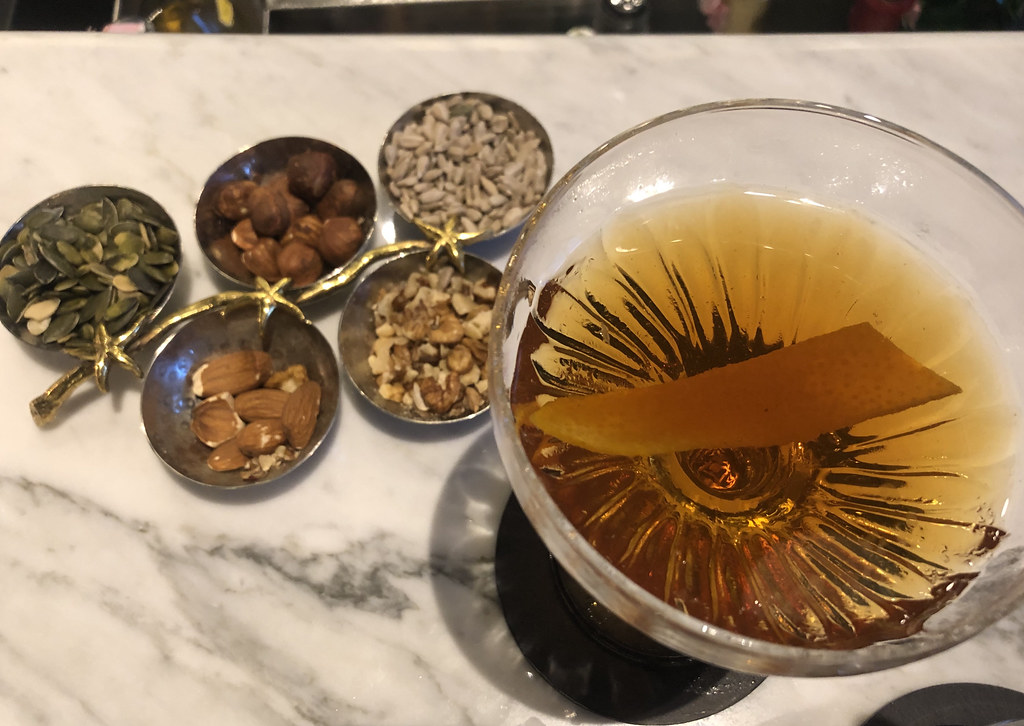 But really it was the bartenders who made it so special. Patrick, Mirza, and Tomo went out of their way to talk to me about the local brandies, cocktails they were working on, and recommendations for around town. 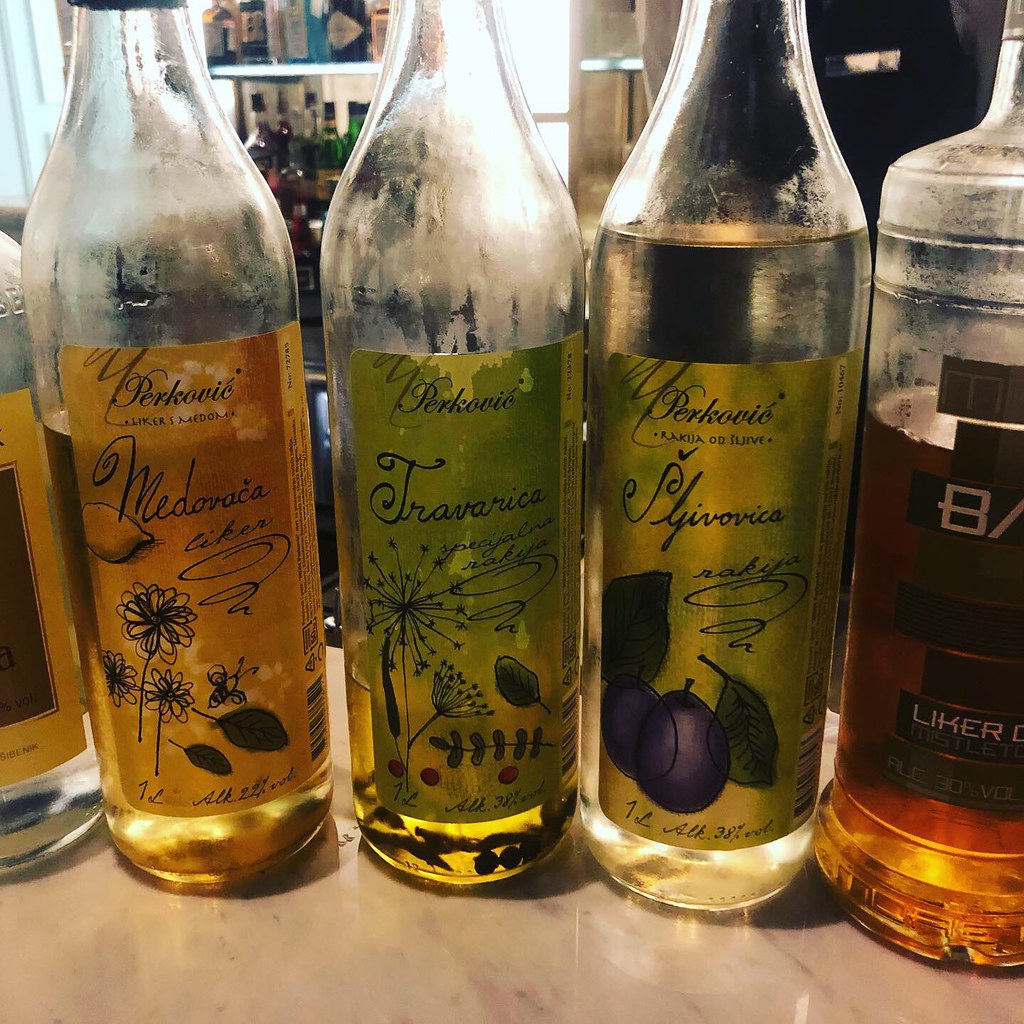 Lady Pi Pi restaurant is recommended by pretty much everyone who goes to Dubrovnik. And with good reason. The rooftop al fresco restaurant is a great setting, with views of nearby Lokrum Island, and the sea of red roofs of the Old Town. The grilled dishes were fresh and hot; I had some excellent squid while Aaron opted for the chicken. The staff is friendly, even if there are signs informing you that you will not be refunded for your meal if it starts to to rain, which seem a little rude. Our waiter even gave Aaron free catsup when they usually charge for it. He was very happy about that! 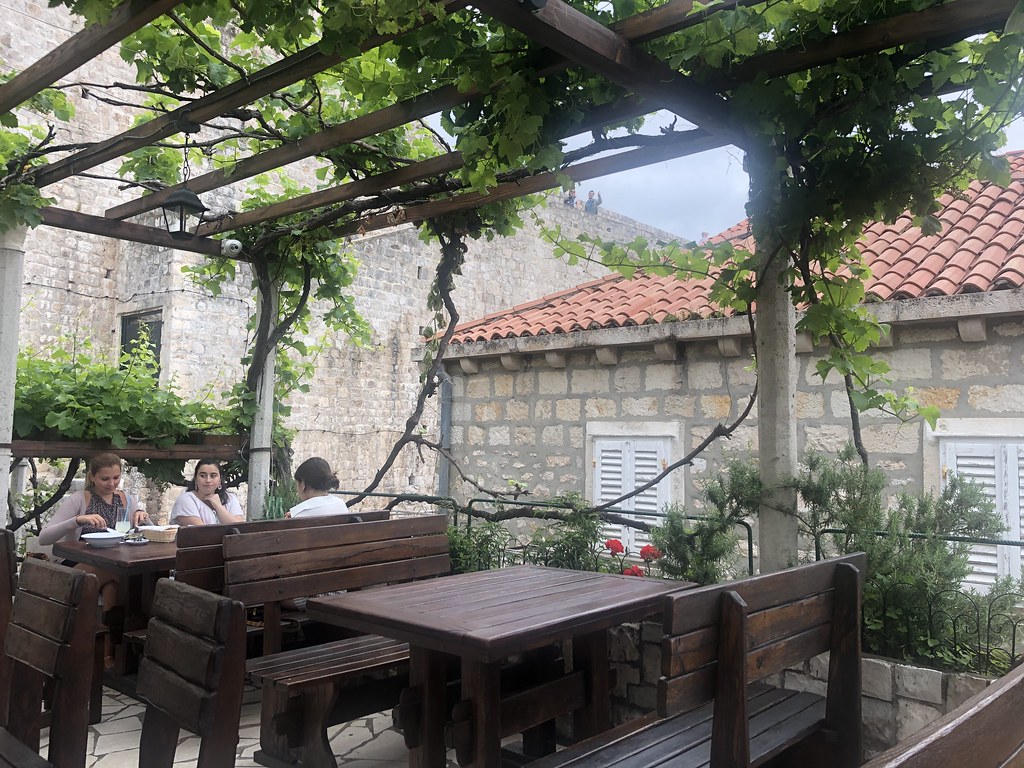 We also had lunch one afternoon at Horizont which has great outdoor seating looking out to the bay. The service was super friendly and the menu sounded good. Both our dishes were just ok though. It's not someplace I would recommend for a meal, but maybe just a bottle of wine and a snack if you are nearby. 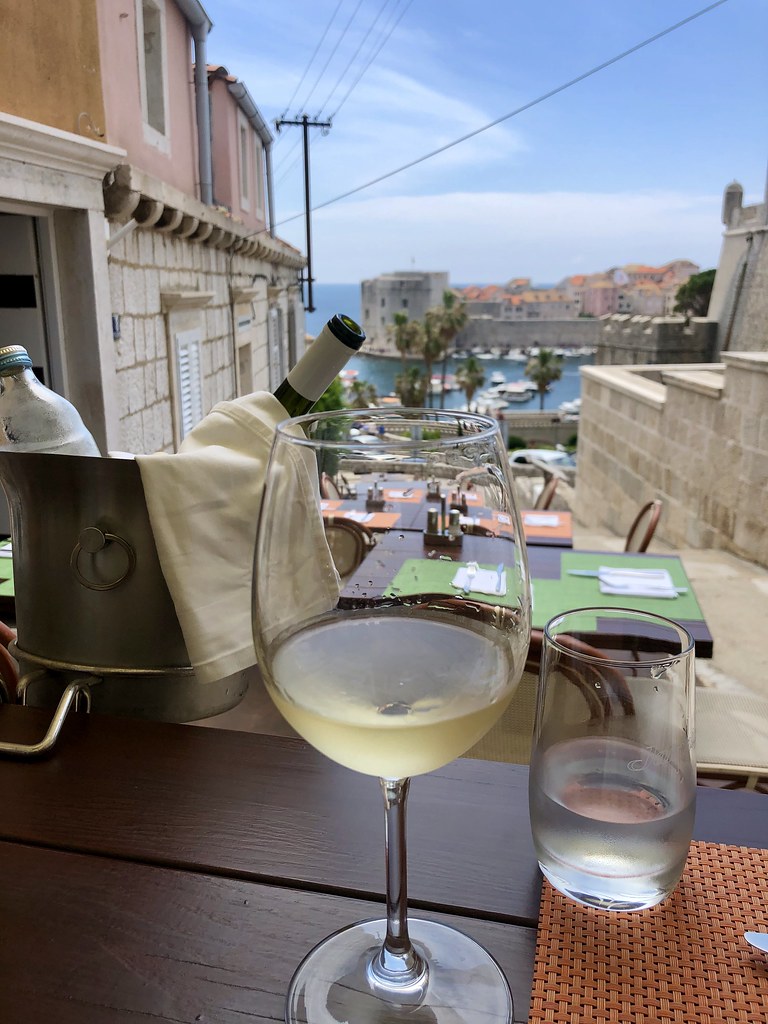 Having tasted some delicious pizza in both Slovenia and other parts of Croatia, we decided to try Mea Culpo for dinner one night. It was ok but nothing like what we had eaten before. Sadly the great pizza run had ended.

Aaron wanted something easy the night before his early morning departure, so we settled in to the Imperial Bar at my hotel for drinks and burgers. The burgers were just ok, nothing like you would get in the states, but it fit the bill for the night. 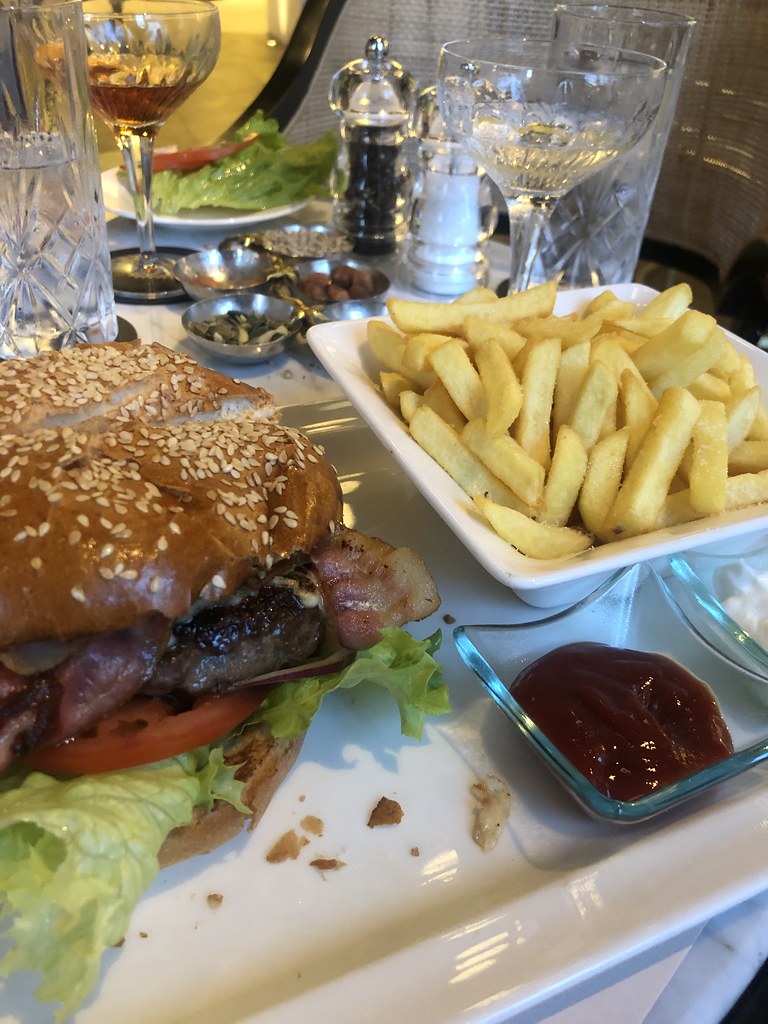 Craving truffle pasta, I chose Dubravka Restaurant one evening. The patio here can't be beat with its views of the old forts. My pasta was fine, nothing to go out of your way for but not bad either. 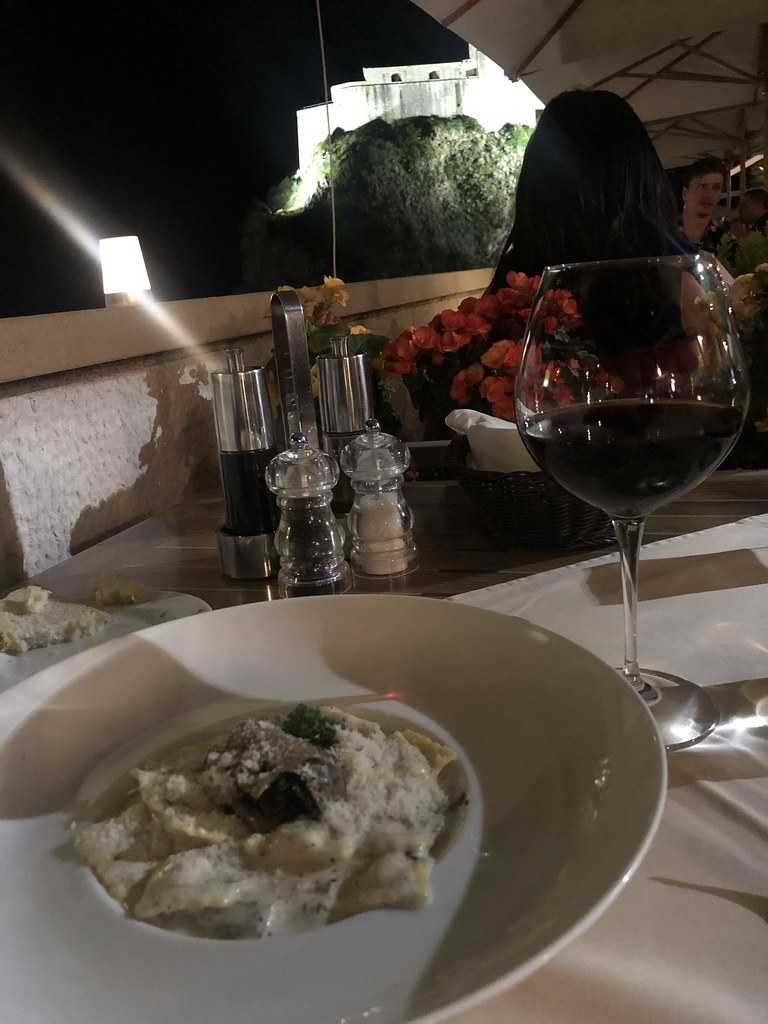 On my last night I took myself to what is considered one of the best restaurants in the Old Town. Proto is a very traditional and chic fish restaurant and I was after some traditional dishes before leaving the country the next day. 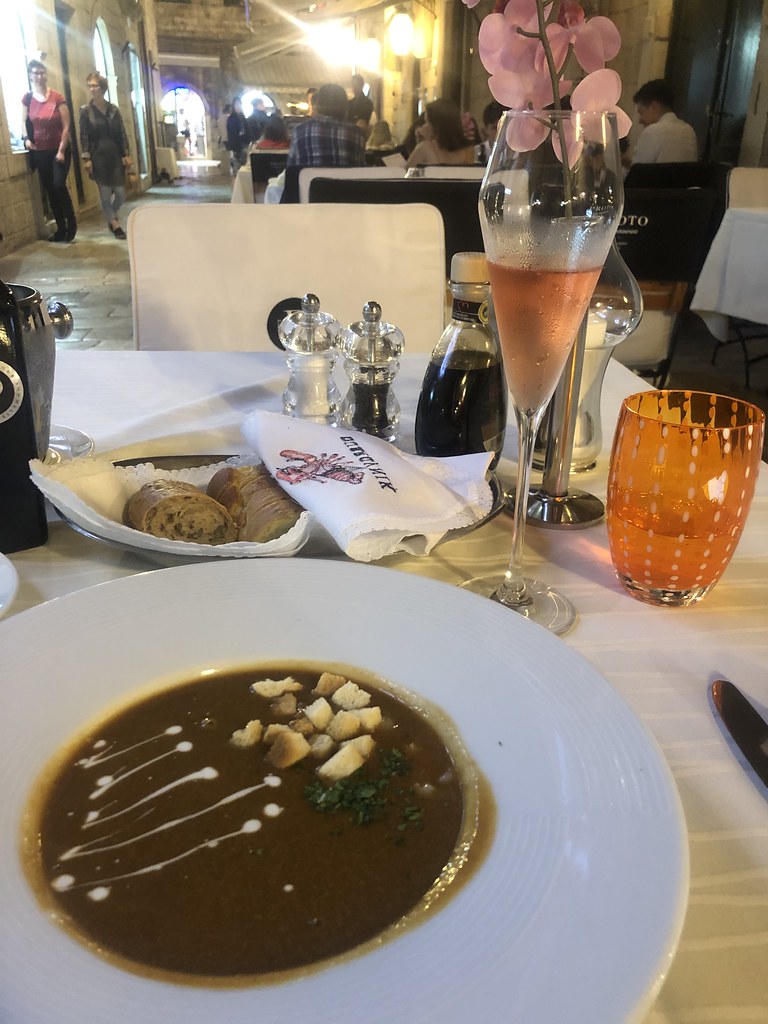 I had a lovely table outside and ordered all the hits, including rosé champagne, shrimp soup, and the famous black risotto. It was a wonderful last meal in town.

(Restaurant 360 in Dubrovnik does have a Michelin star but neither Aaron or I had heard very good reviews -except about the view- so decided not to dine there. )

Although it's not a food or cocktail destination, Dubrovnik has so much history and natural beauty that it's hard to be disappointed! And I certainly wasn't! 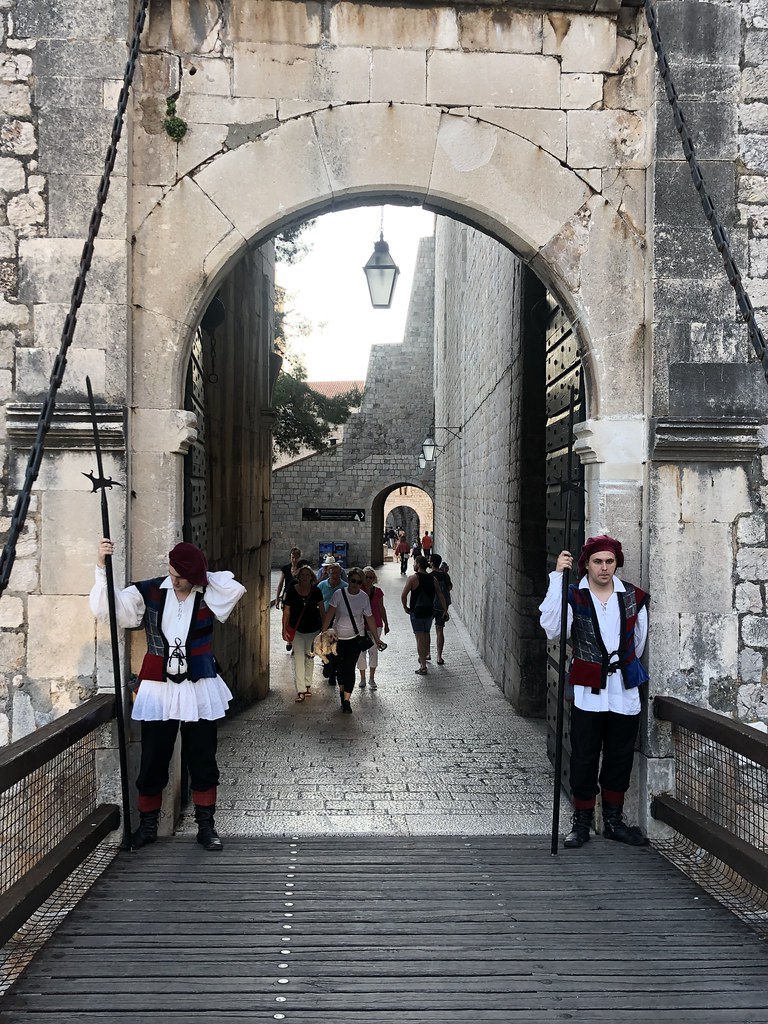