Dinner in the Middle of the Baltic Sea

After spending a wonderful day exploring the island of Bornholm (more on that here), I drove 20 minutes to my dinner destination, Kadeau,. My driving directions had said to follow the road through the forest until it ended at the sea. God, I was so excited when I saw this stunning location! 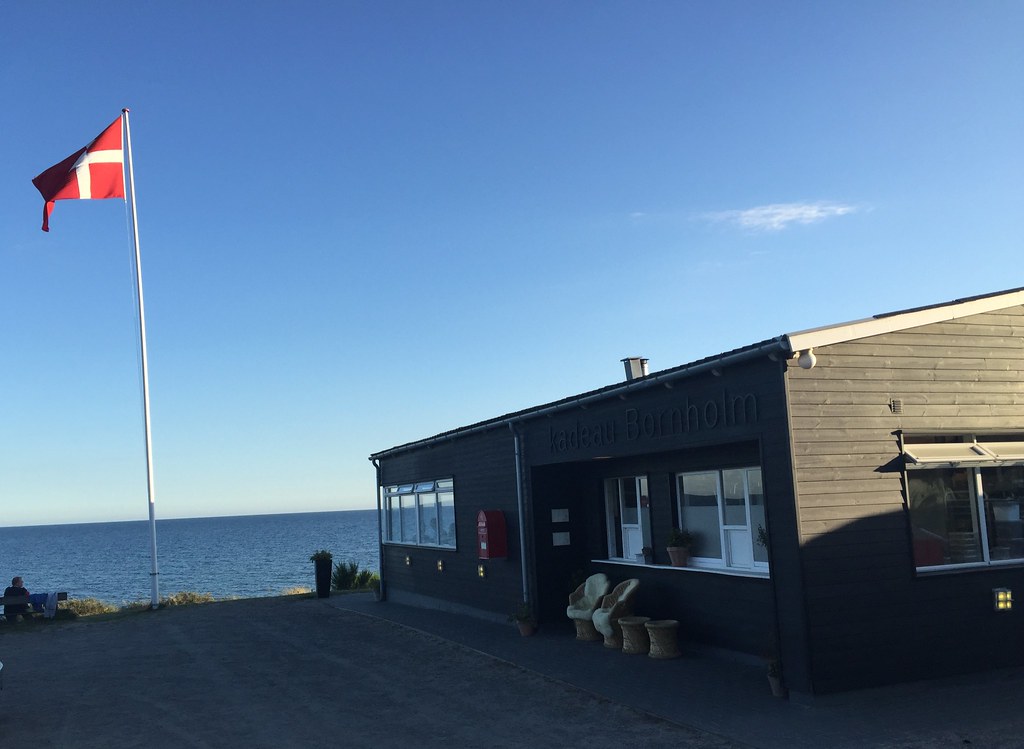 The restaurant is only open from spring until fall. They call it a beach pavilion and the decor is the epitome of Scandinavian design; airy, modern, minimal, cozy. I checked in with the host and they gave me the option of sitting outside or in. Although is was gorgeous out, I knew it would get a little chilly so I asked to sit inside. 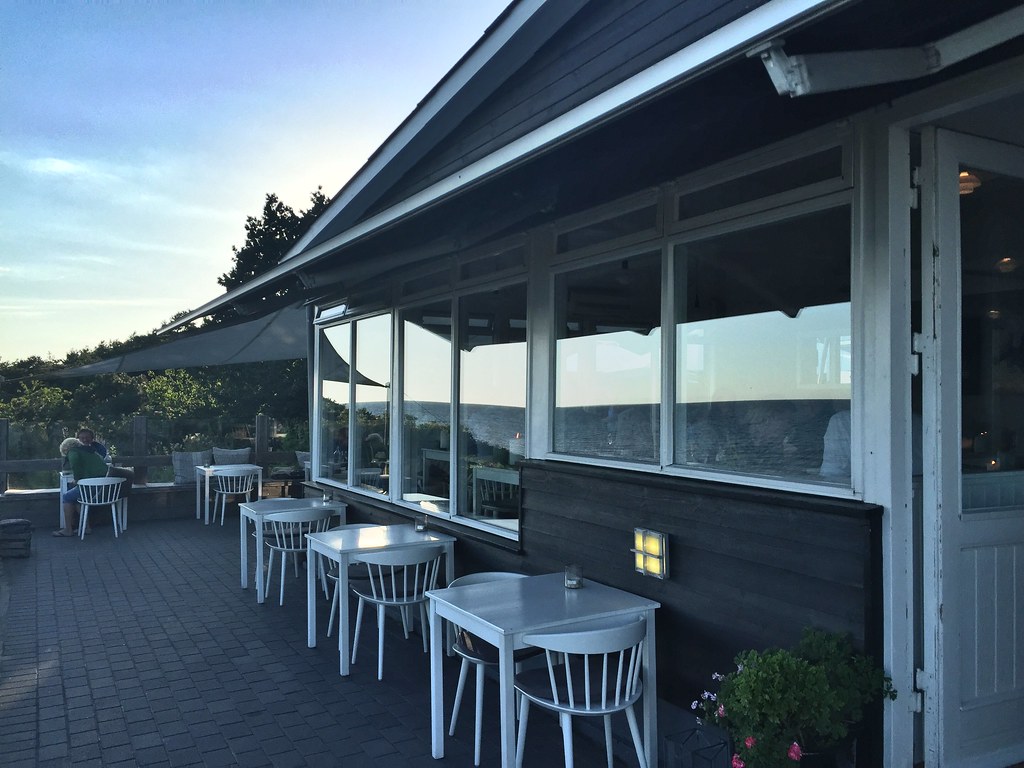 Kadeau has a set menu, you just choose between 8 or 5 courses, to which I chose 5. Having recently eaten at a handful of Copenhagen's best restaurants (more on that here) I knew 8 would be too many for me. You can also choose to have wine or juice pairings. Anyone who knows me knows I chose the wine pairings!

My dinner started with a glass of grower champagne served with 4 courses of "snacks" (so I guess technically it was a 9-course meal all told). And in true "Nordic cuisine" style, my first snack arrived on a moss covered rock. These were fried mustard leaves and also a dehydrated baby carrot, both went with the little dish of "dip". 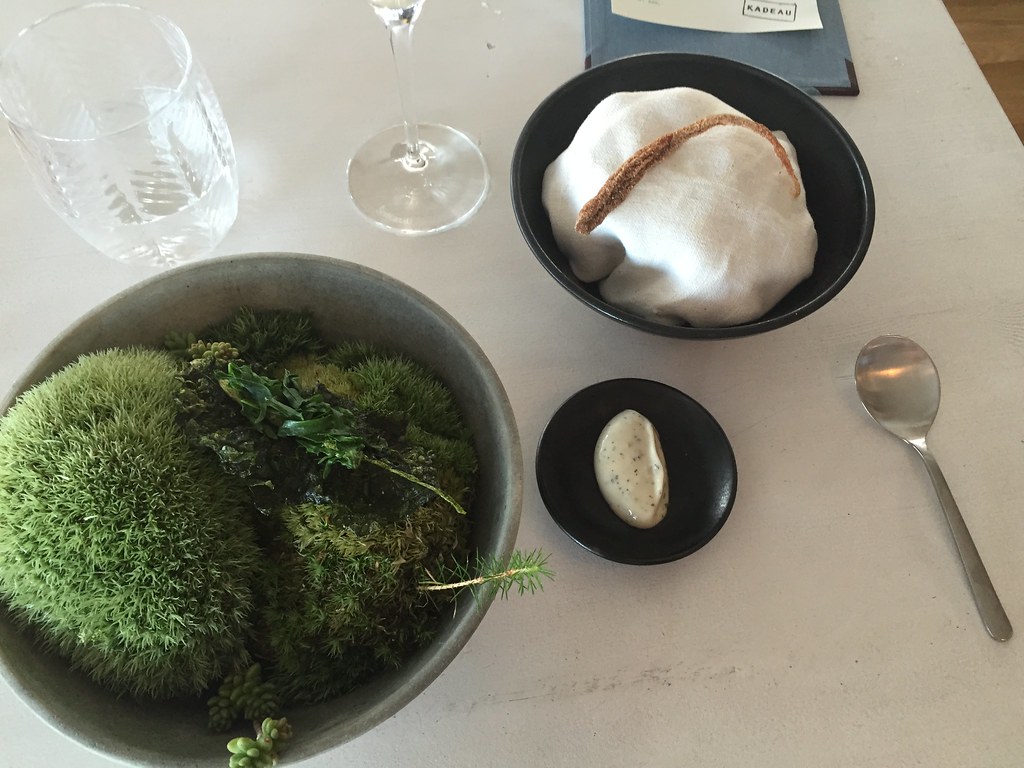 Next was a beautiful serving of tomato juice aged from last year and fresh celery juice. 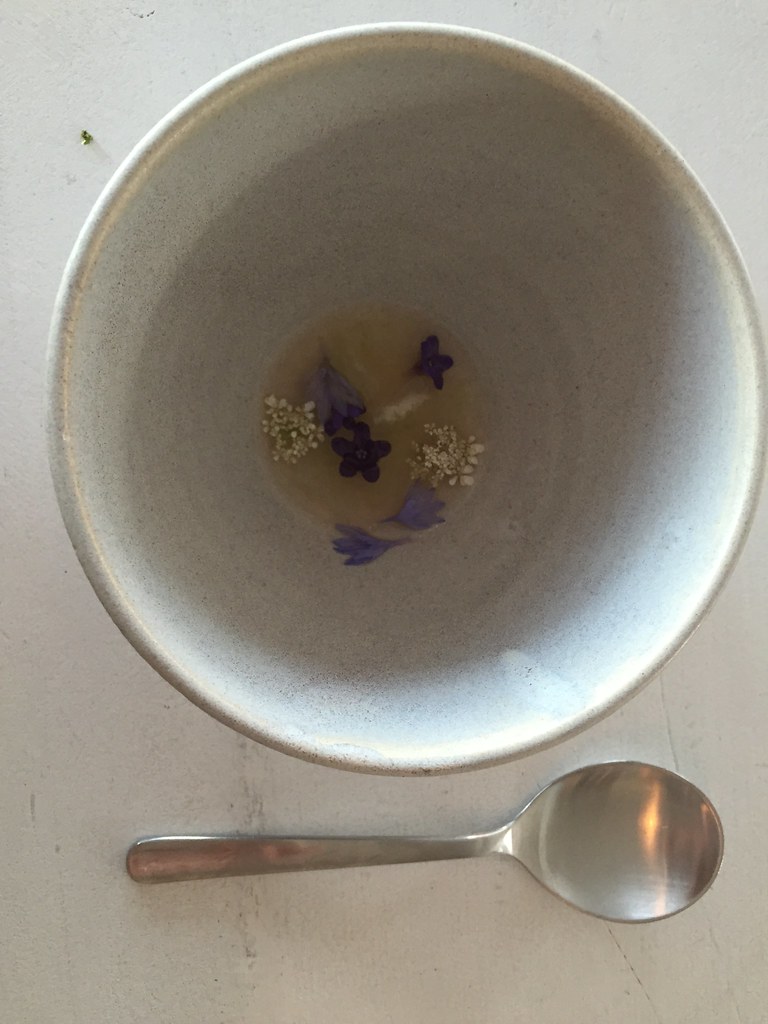 Then this delicious serving of mackerel which had been smoked over burnt hay (and served over it too!) 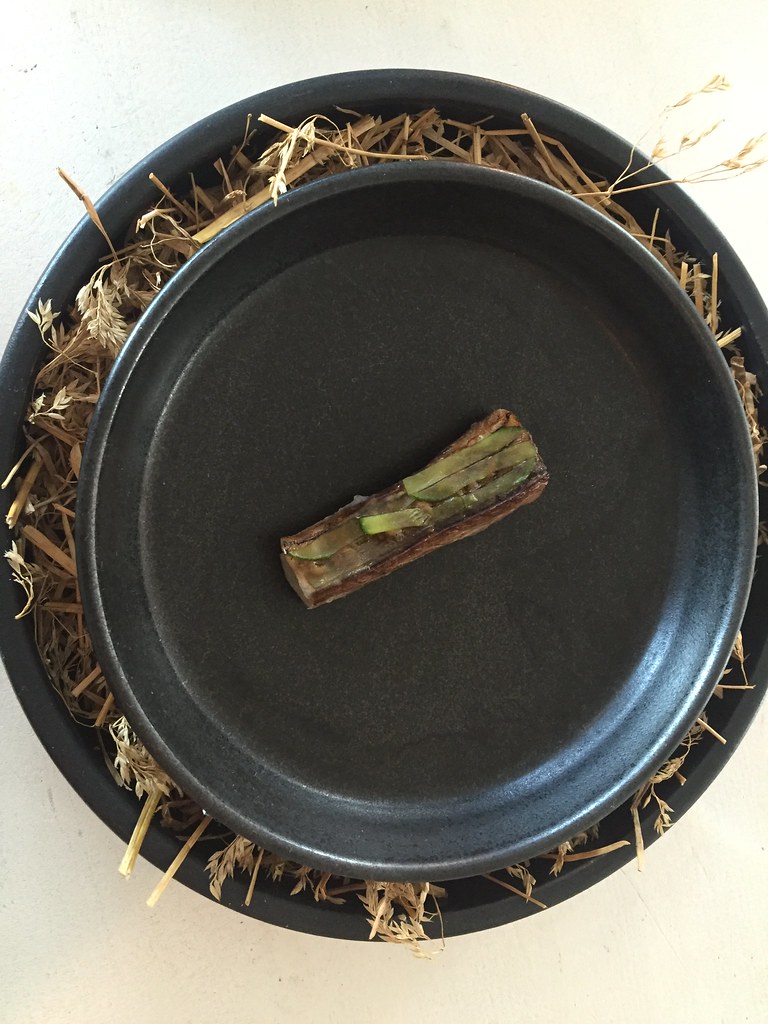 My last snack course was fried shrimp (from the Baltic sea) that you dipped in an emulsion and then in flowers. I wish my photo was better, but you can see how lovely this was! 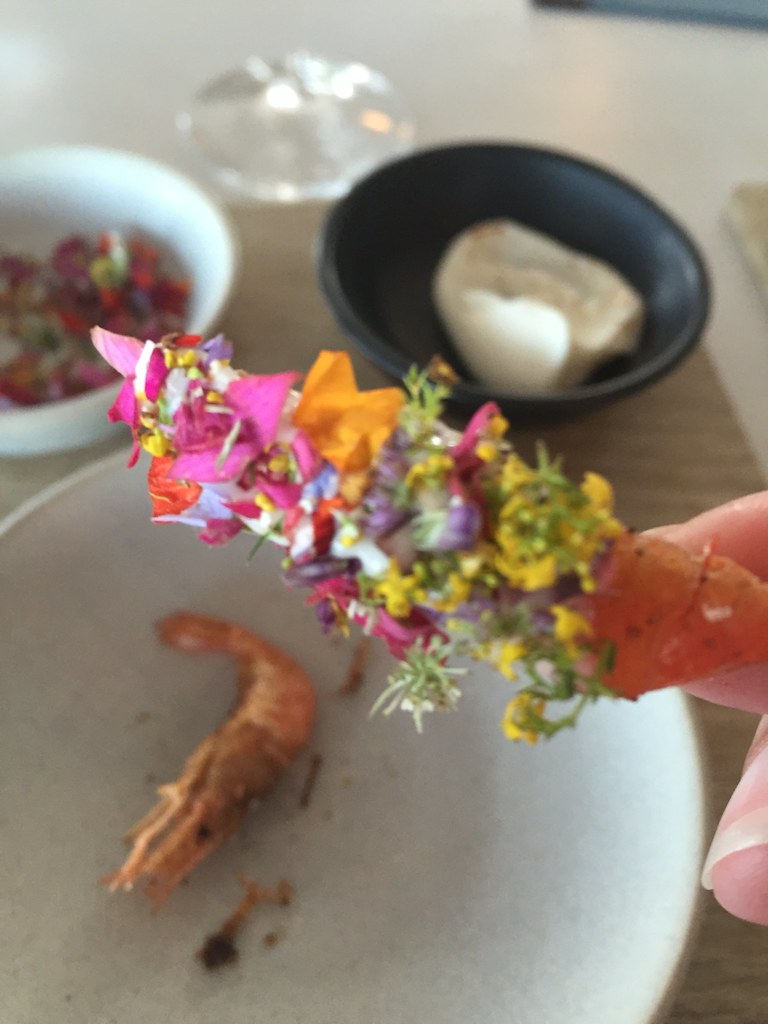 They poured me a bright Albarino from the Rias Baixas region and put down a plate of warm bread. The bread was made of emmer and served with butter made from buttermilk and topped with burnt hay. I had to show a lot of self-restraint not to eat every piece of this, it was so good! Plus look at that cute butter spreader! 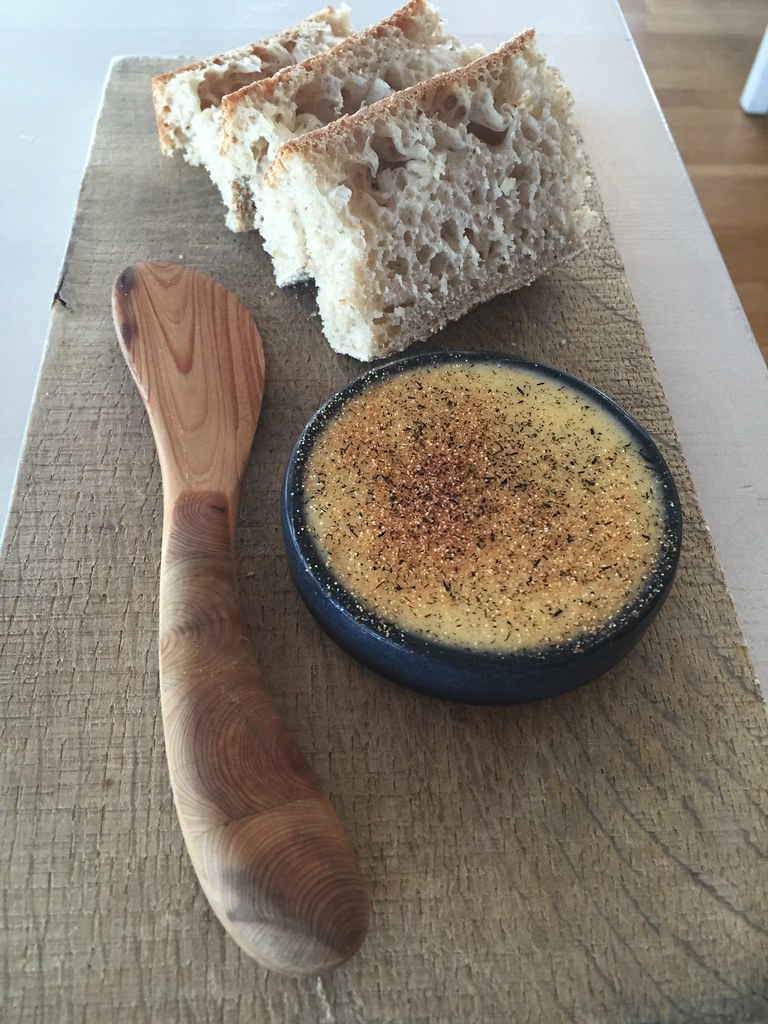 And after all of that it was time for my first course! It was called "green peas, woodruff, black current leaves, razor clam". What is was, was a super fresh garden soup containing both razor clams and cockles. The peas were barely cooked and gave the soup an amazing crunch. The wine pairing was spot-on. 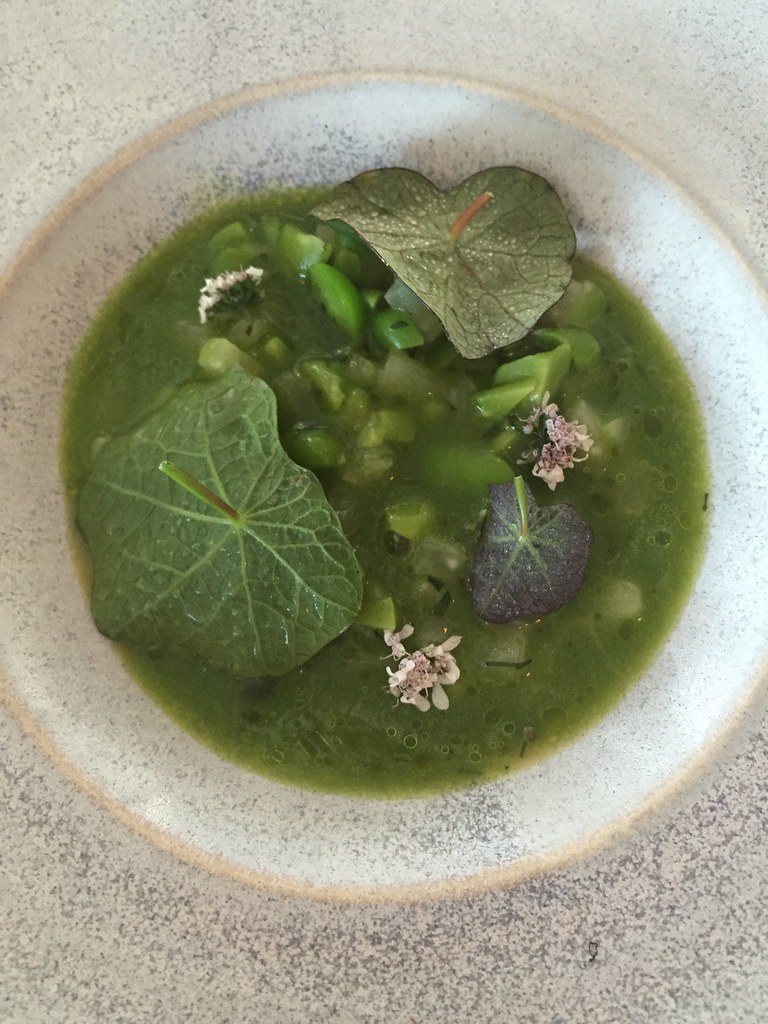 Next up a Chablis was poured to go with " Hispi cabbage, oysters, parsley". This was an incredible "lasagne" of cabbage layered with oyster and gooseberry. I'm not really a big cabbage fan, but I could not get over how good this was! 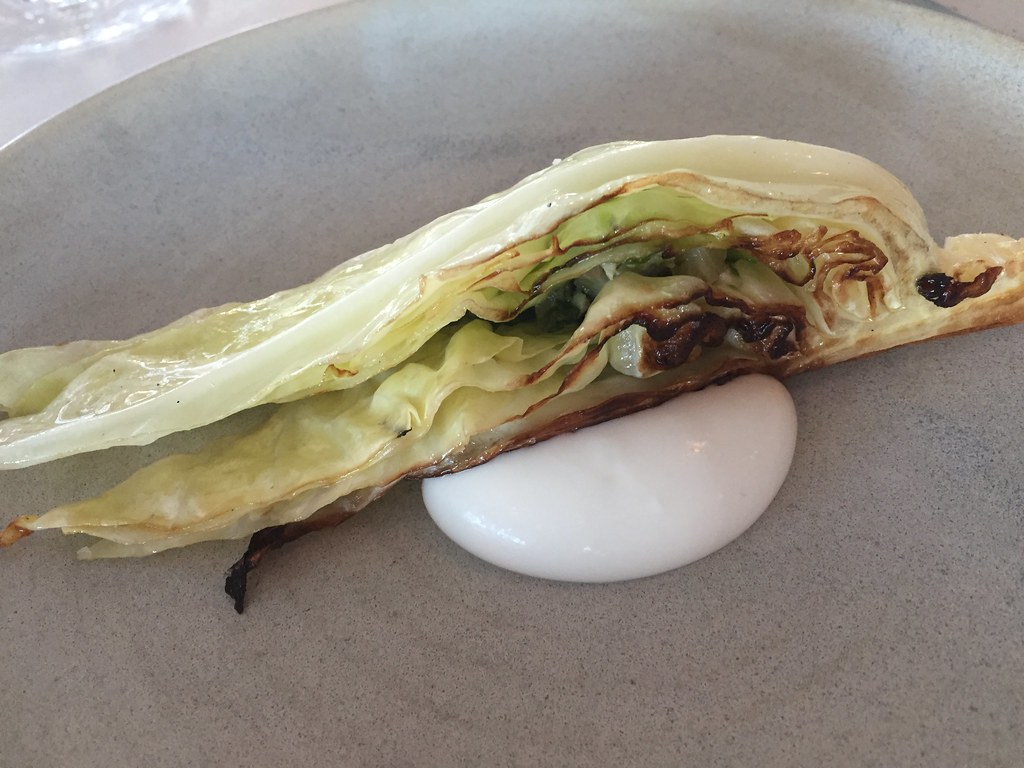 I took a break at this point to finish my wine, walk around the grounds, and take in the view before the sun set. The restaurant has a small onsite garden, but there is a larger one at a different location where most of the produce comes from. There's also a path down to the beach where you can wander around. The location is just fantastic and the only sounds are of the sea and the murmurs of diners from the restaurant. 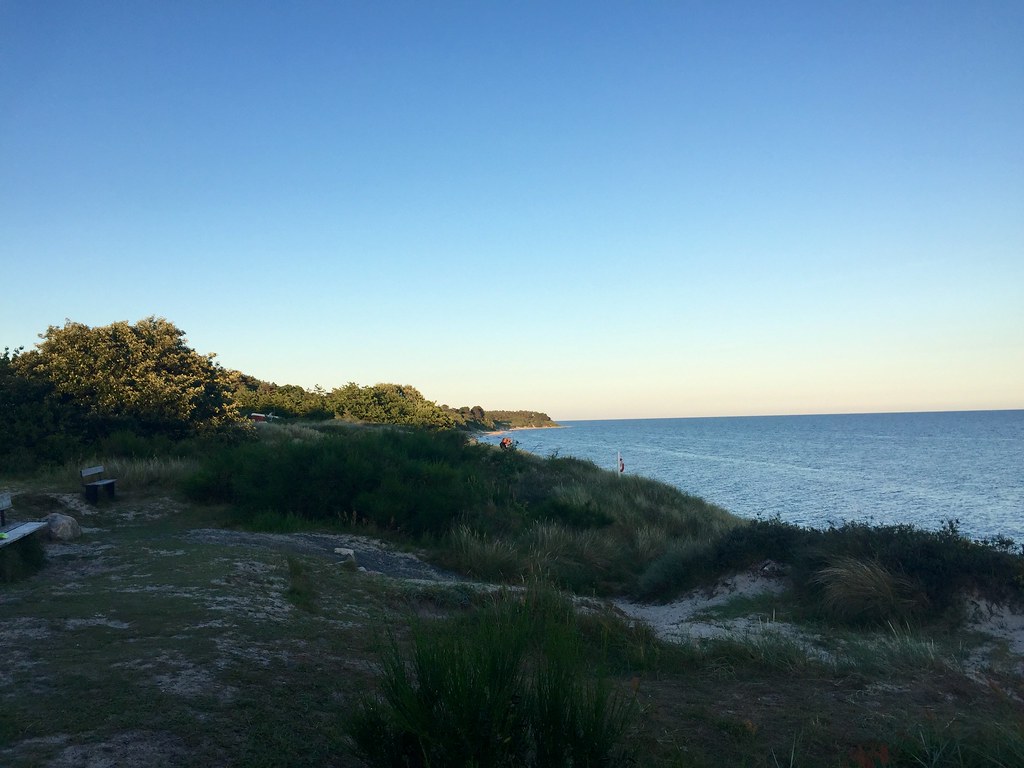 My 3rd course started with a Gravières in the glass, a lovely Chardonnay from southern France. Then "cauliflower, cheese, hay, wood ants, buttermilk whey". The chef explained to me that this single roasted floret of cauliflower had cheese melted on it. The cheese was made from the milk of cows which eat grass from part of the island where the wind blows in from the sea, making the grass salty. That, in turn makes the milk and the cheese salty. On the cheese were wood ants which had been roasted in hay. Yes, I said ants. All of this was on a buttermilk foam. It was very tasty, even the ants! But then again that wasn't my first time eating ants. 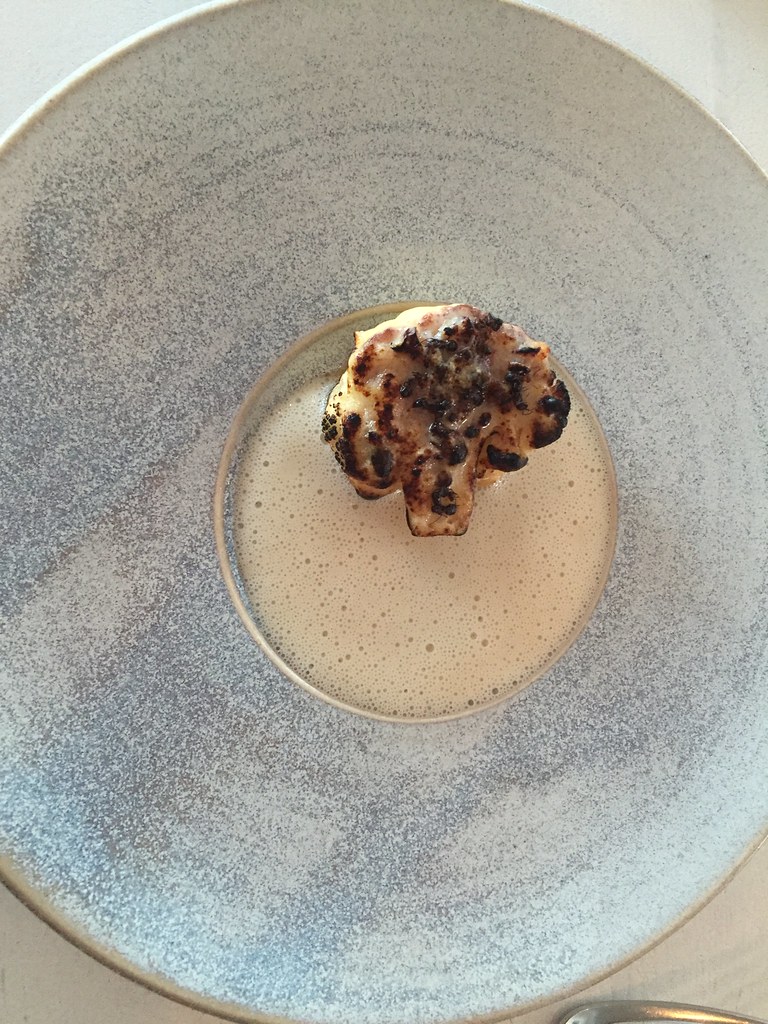 The somm poured me a glass of Occhipinti Frappato, which I was not familiar with. Turns out it is mainly known as a blending grape but the winemaker Arianna Occhipinti is known to be quite skilled at making it the main event. And it was a lovely, light red (similar to a Gamay) that went wonderfully with "pork, fermented garlic, preserves". 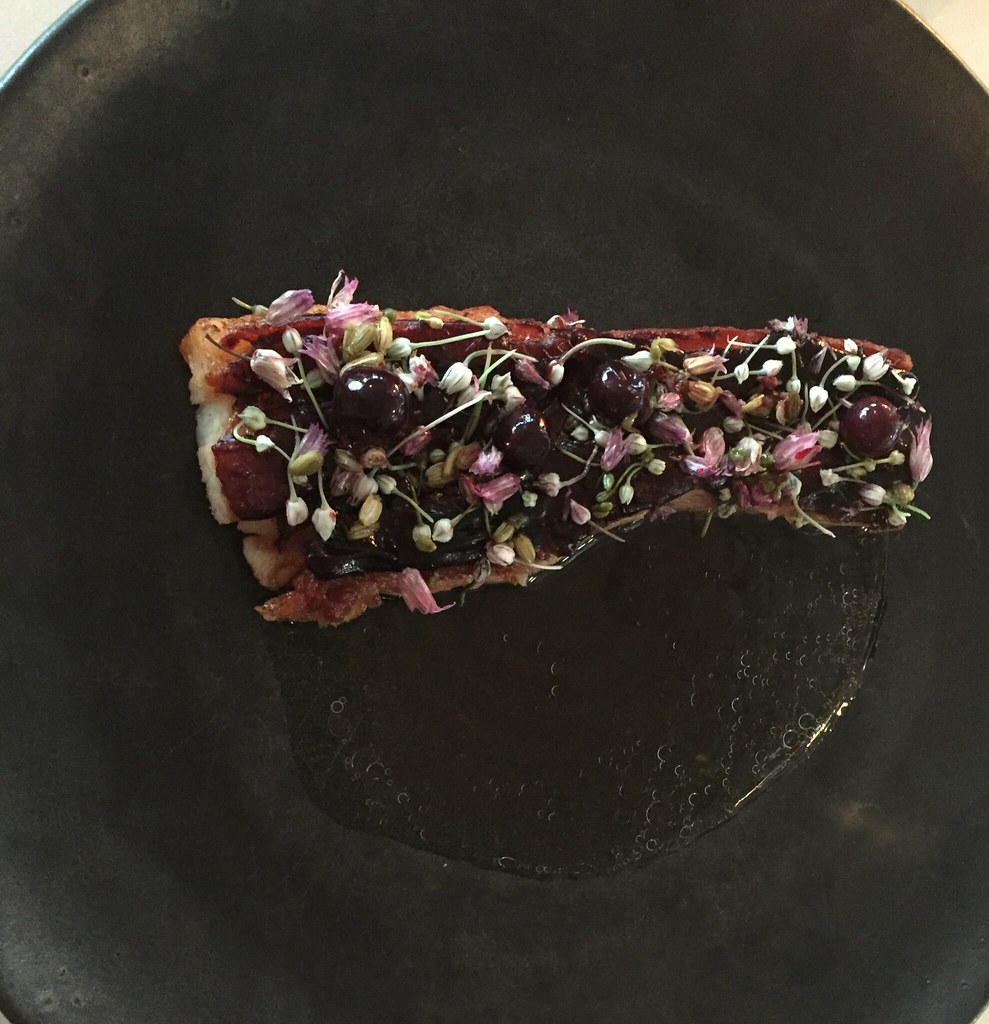 The chef came over with a hot saucepan of juice to spoon around my pork and the scent was amazing! He told me it was just melted butter and marrow. Holy hell was that good! And look how pretty the flowers and berries are on the pork!

I stepped outside again to catch the sunset, obstructed by part of the beach cliff. As the sun was setting a full moon was rising, it truly was a stunning evening. 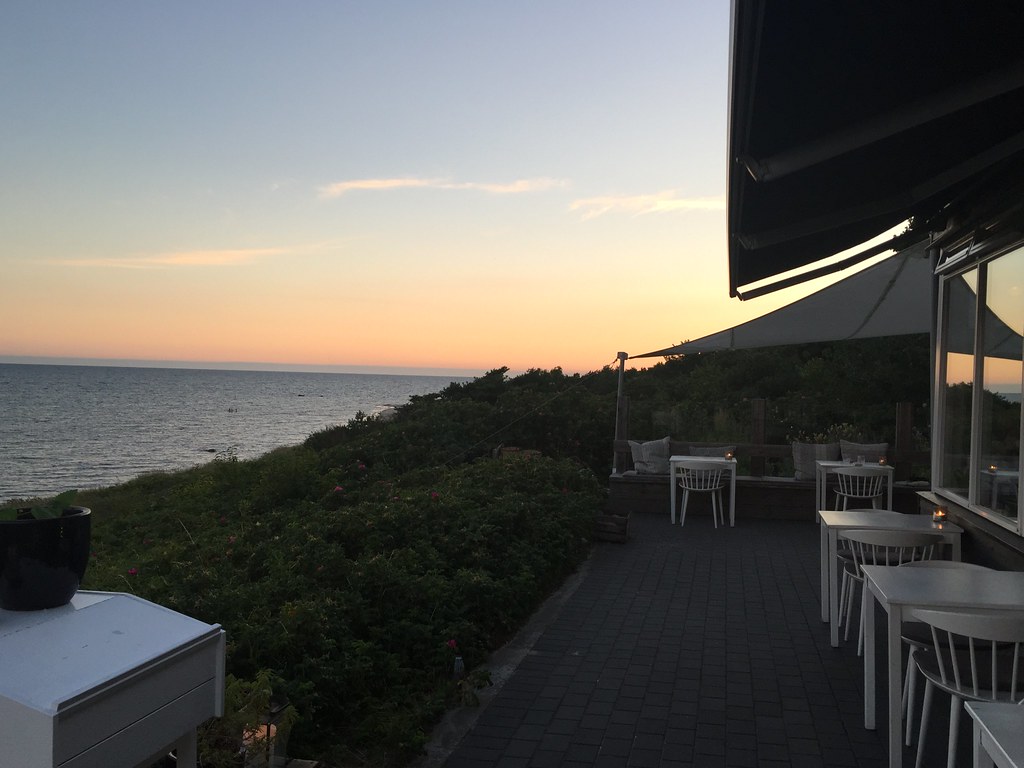 Back inside a German riesling (by another woman winemaker, Katharina Wechser) was poured to accompany "caramelized buttermilk tart, noble fir, citrus herbs". Wow, this was such a perfect dessert for me, not sweet but rather savory and bright. 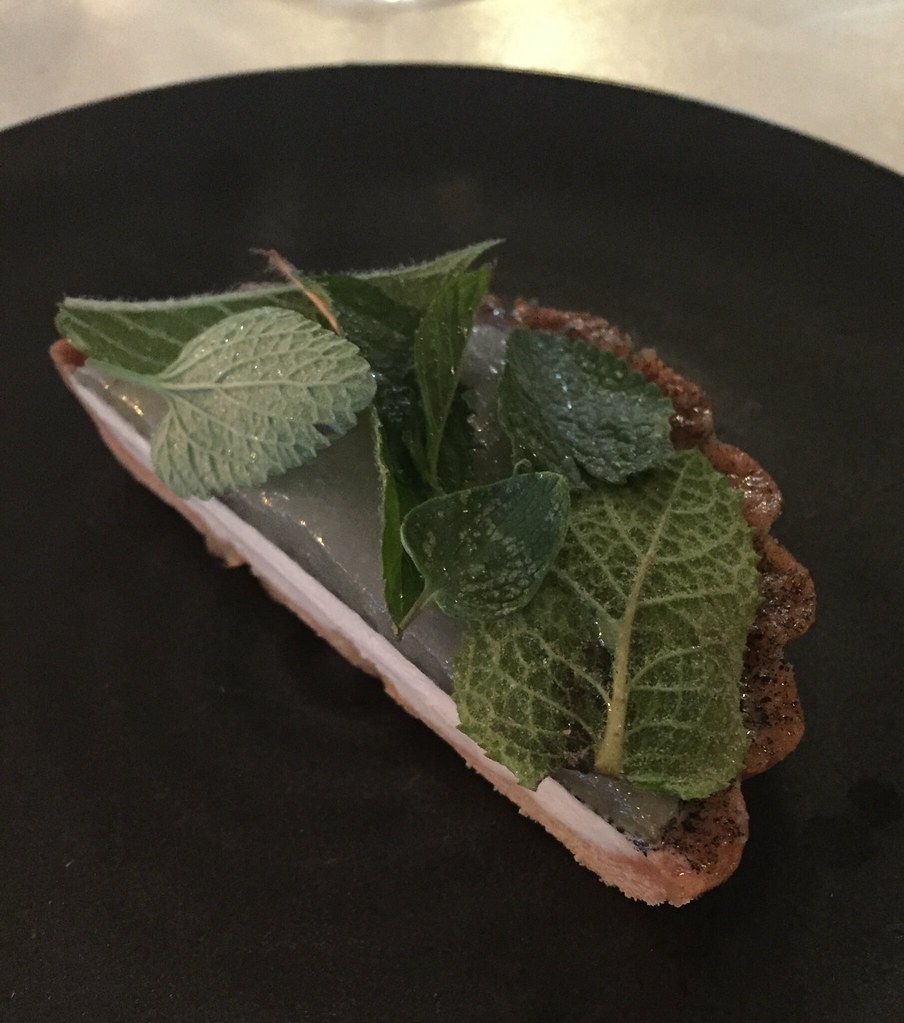 While walking the grounds I had noticed an adorable firepit and at the end of my meal I was given the option of having my coffee and mignardises next to it. Yes, please! 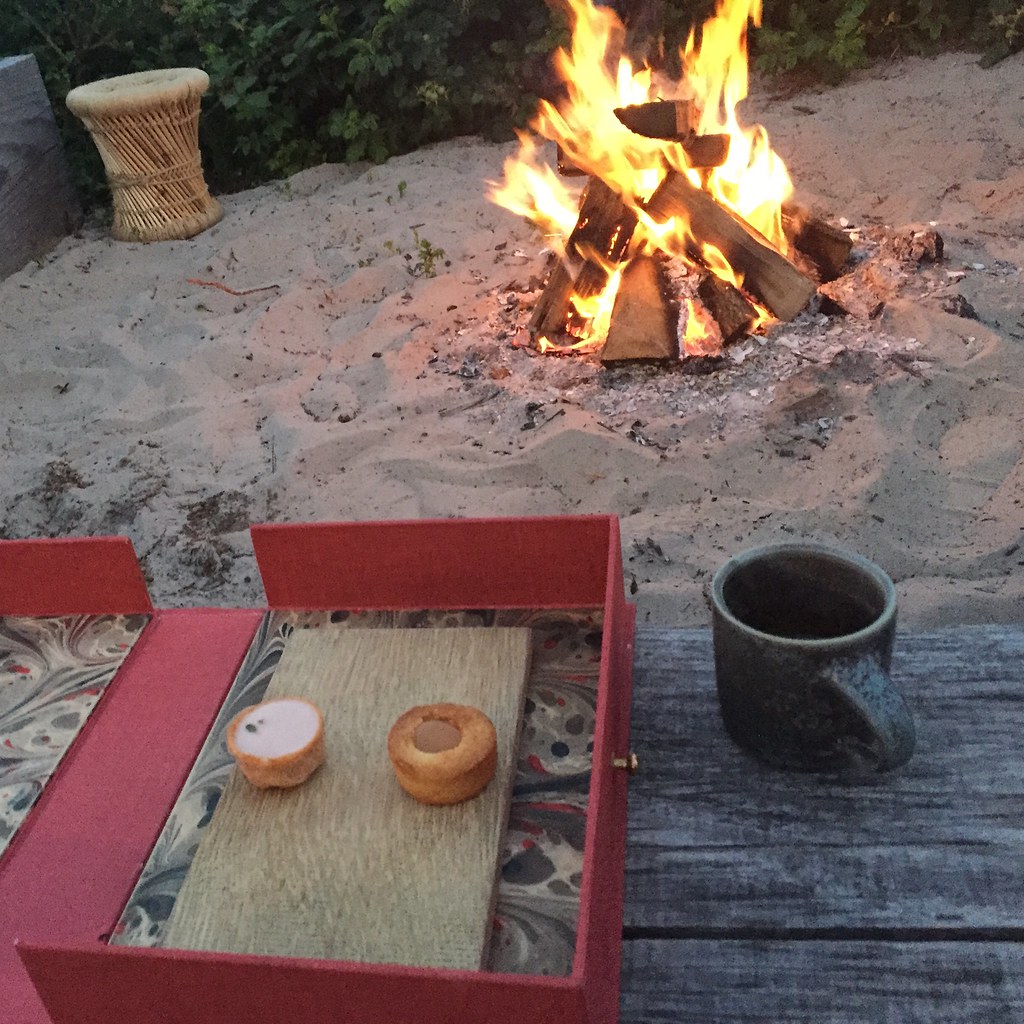 If you have ever been to The Willows Inn on Lummi Island, this place feels very similar only without the onsite lodge. To me it was one of my favorite dining experiences, and I've had a few! Everything from the location to the ambiance to the absolutely exceptional service and of course the unique and delicious food made this a top-notch dinner. 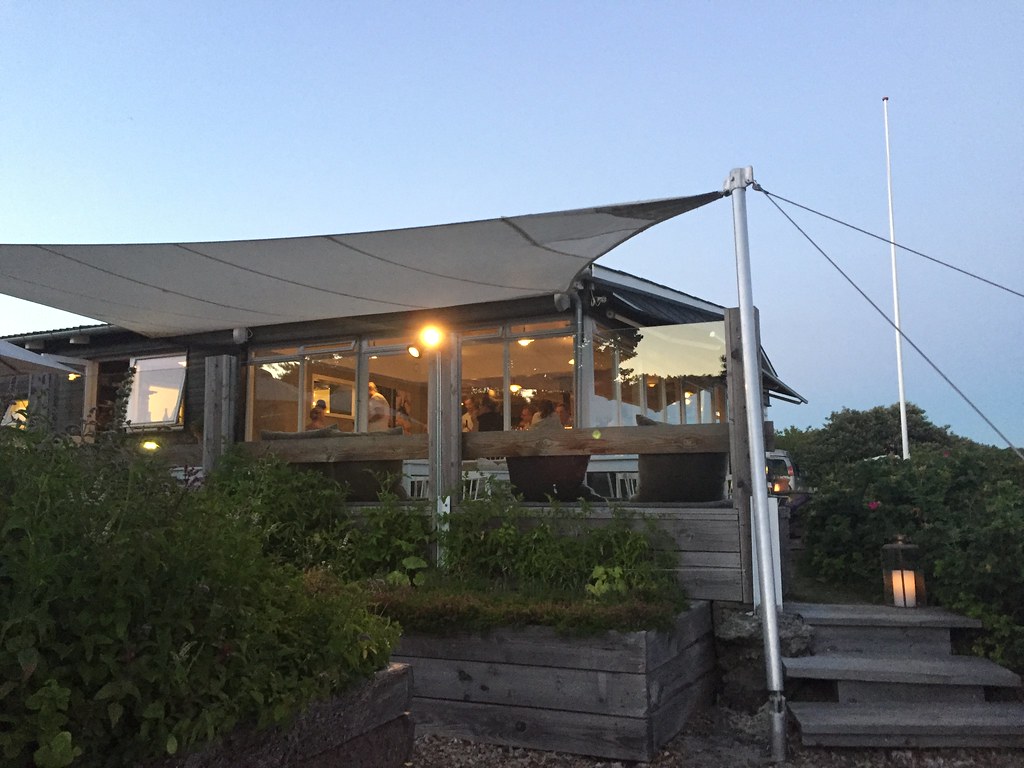 I drove back to my hotel at 10:30pm and there was still a sliver of sun setting in the west, while the full moon shined bright in the east. This was the farthest north I've been during summer and I was loving the twilight. 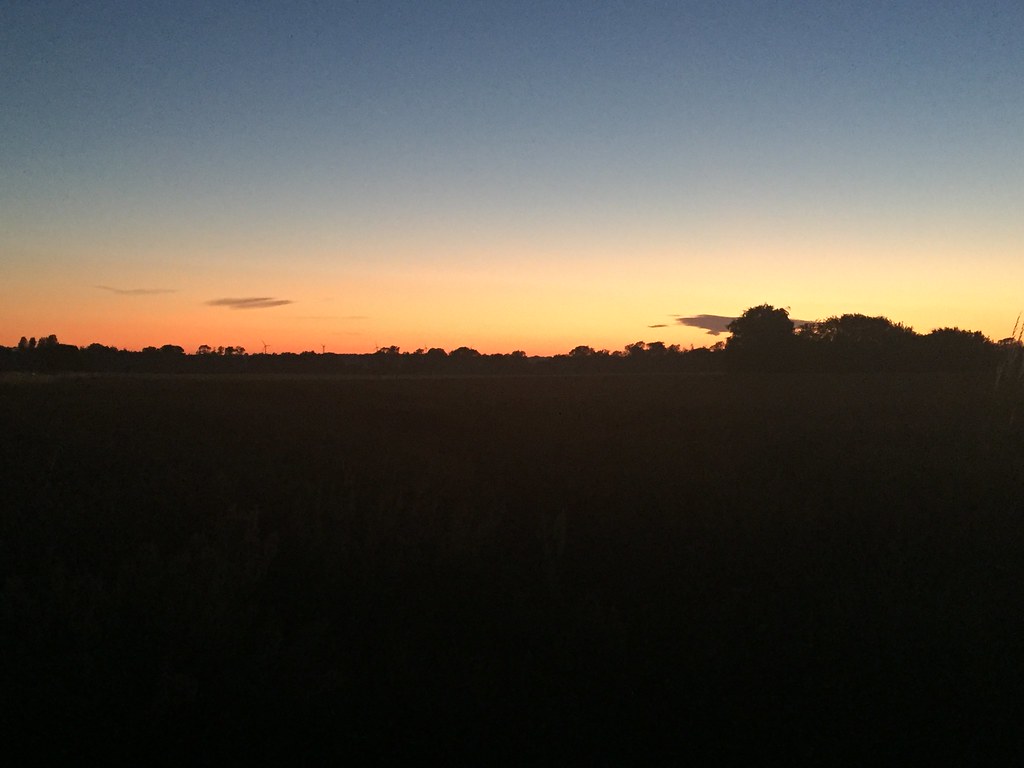 I had a glass of wine on my patio and watched the moon reflect off the sea before going to bed, barely a sound to be heard. Ahhh. 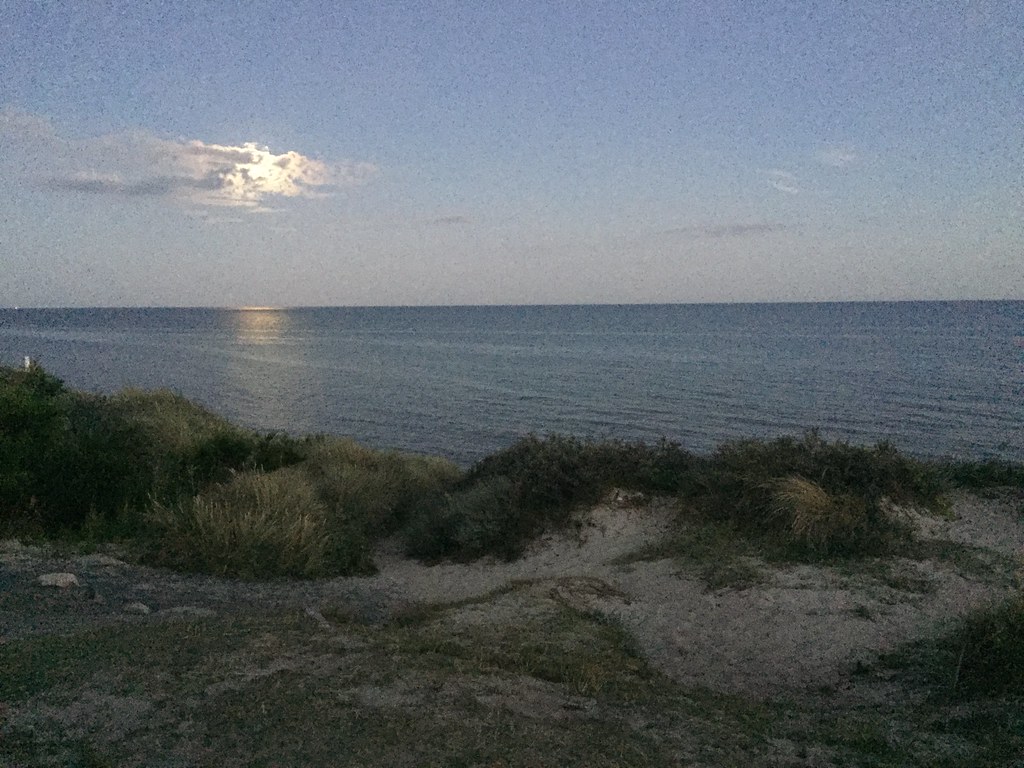 All Bornholm photos here
Other posts from this trip:
Danish Days
Hygge Time!
Last Days in Copenhagen
An American in Bornholm
Best Restaurant in the World?
at September 25, 2016