An American in Bornholm

Denmark has over 406 islands, that is quite a few I'd say! Only about 80 of them are inhabited. I chose to relax for a few days on one that's farthest away (unless you count Greenland); Bornholm. Home to just under 40k people, Bornholm sits in the middle of the Baltic Sea south of Sweden and north of Germany. 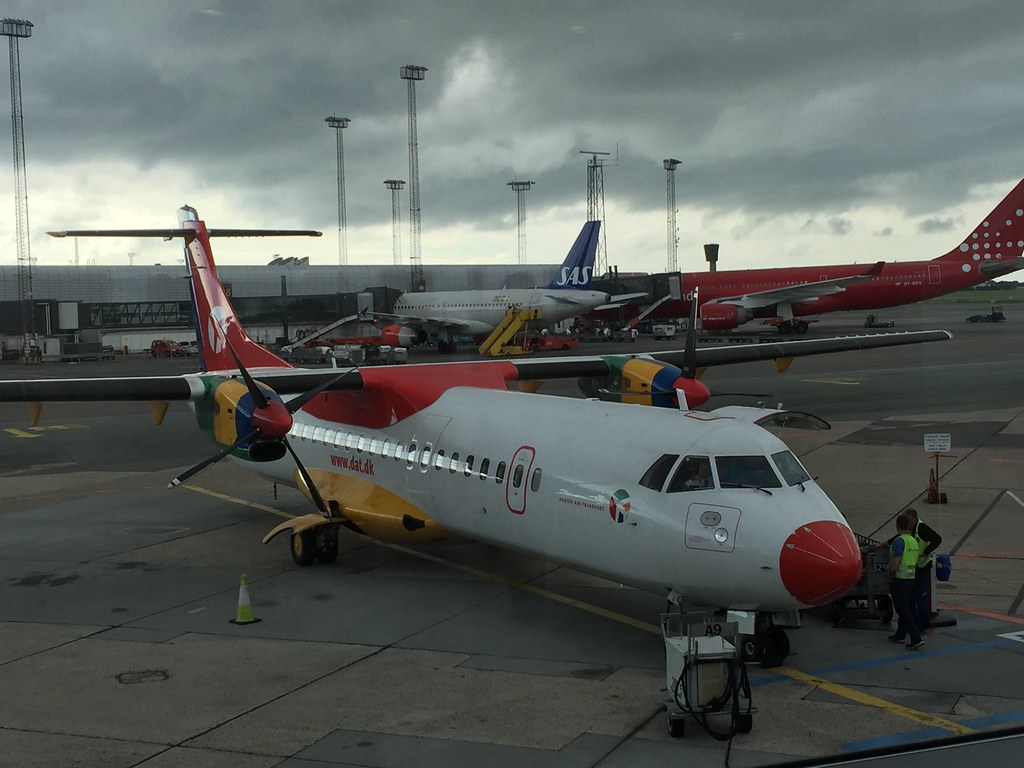 I left the apartment in Copenhagen (more on that here), walked to the metro and caught the direct train out to the airport. When I checked in for the flight the agent said, "I have never heard of an American going to Bornholm!" I was even more excited! It was a quick 40-minute flight on a tiny prop plane from CPH to the island; since we were flying pretty low I could see the bridge to Malmö, Sweden from my seat.

A friend had told me about the restaurant Kadeau located on the island. They have a new location in Copenhagen also but as I read about this tiny rock I was intrigued by Bornholm. It's known for sunny beaches, pretty forests, round churches, and smoked fish. And of course this Michelin starred restaurant. I couldn't resist. 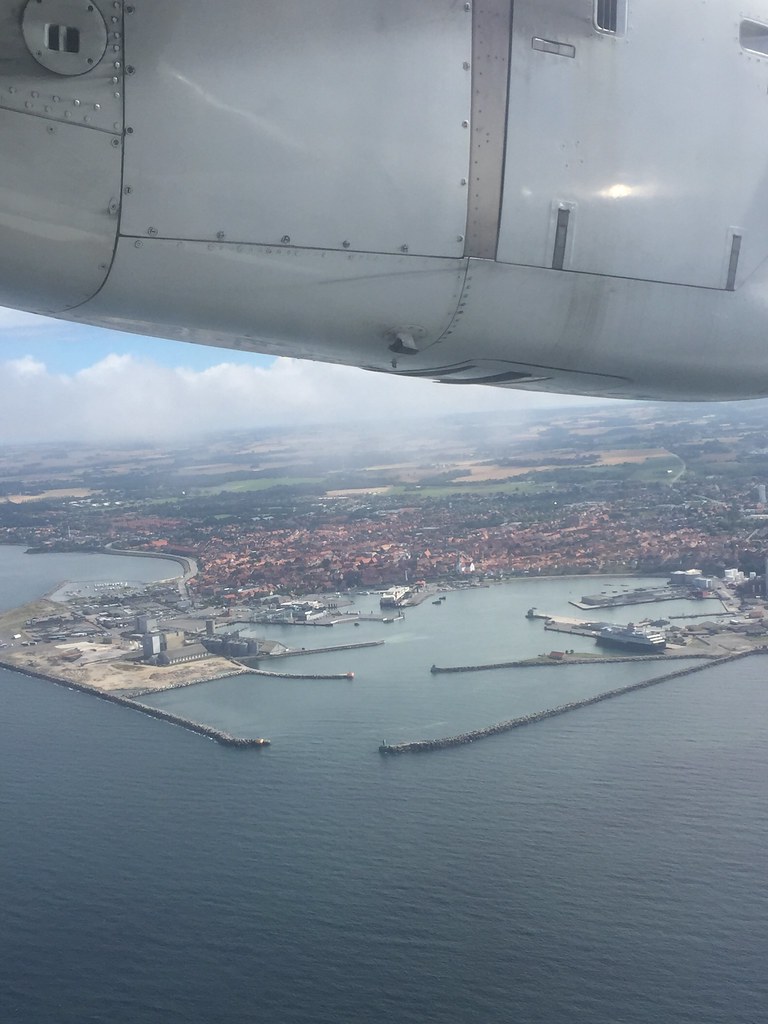 Unfortunately when I landed at the tiny airport I realized that even though I had planned to make a car rental booking, I didn't actually do it. Normally this wouldn't be a big deal but seeing as there were only three rental desks, and one was closed, I knew this might be problematic. When I approached the first desk the agent looked surprised. When I said I wasn't sure if I had a booking or not, he assured me that I didn't as he had no more cars. The island is a popular summer holiday getaway for the Danes, and it's hard to get around on the bus if you have limited time. I got lucky at the next desk, as he had one car left! A stick shift; good thing that's what I drive at home!

Disaster averted, I made the quick drive to the town of Rønne and my hotel the Radisson Blu. My luck held out as I arrived around 10:30 am, well before the 3pm check in, and there was a room ready. The woman at the counter asked what I was in town for and seemed surprised when I answered I just wanted to explore for a few days. 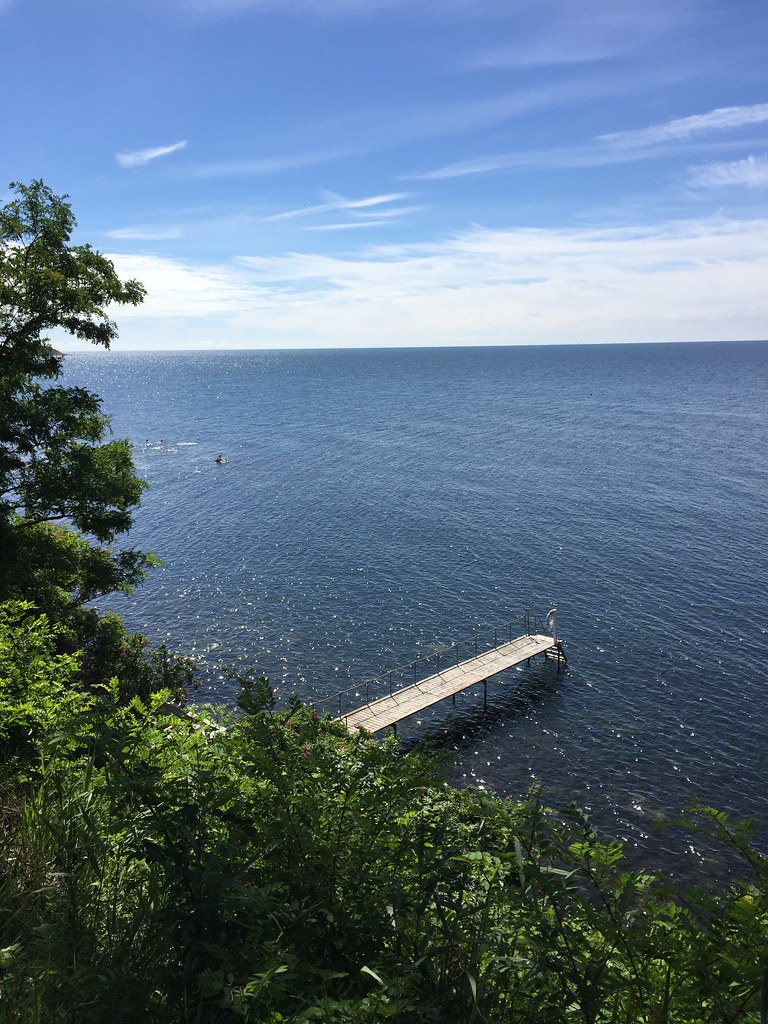 All the rooms here have a view of the sea, and what a lovely view it was! This is EXACTLY what I wanted! Sunny skies, gorgeous views, feeling like I was in the middle of nowhere. Bliss.

It also was not lost on me that even at the Radisson Blu, the room was decorated with Danish design in mind.

I quickly changed, packed a day bag and headed out for lunch. My destination was Hallegaard, a butcher/deli 30 minutes away in the northeast corner of the island near Svaneke. I drove thru lush forests (Bornholm has more forest than all the rest of Denmark) and wheat fields, down tiny one-lane roads, and past numerous farms before finally arriving at the deli. It's not in a town, there aren't any signs, it's just there. 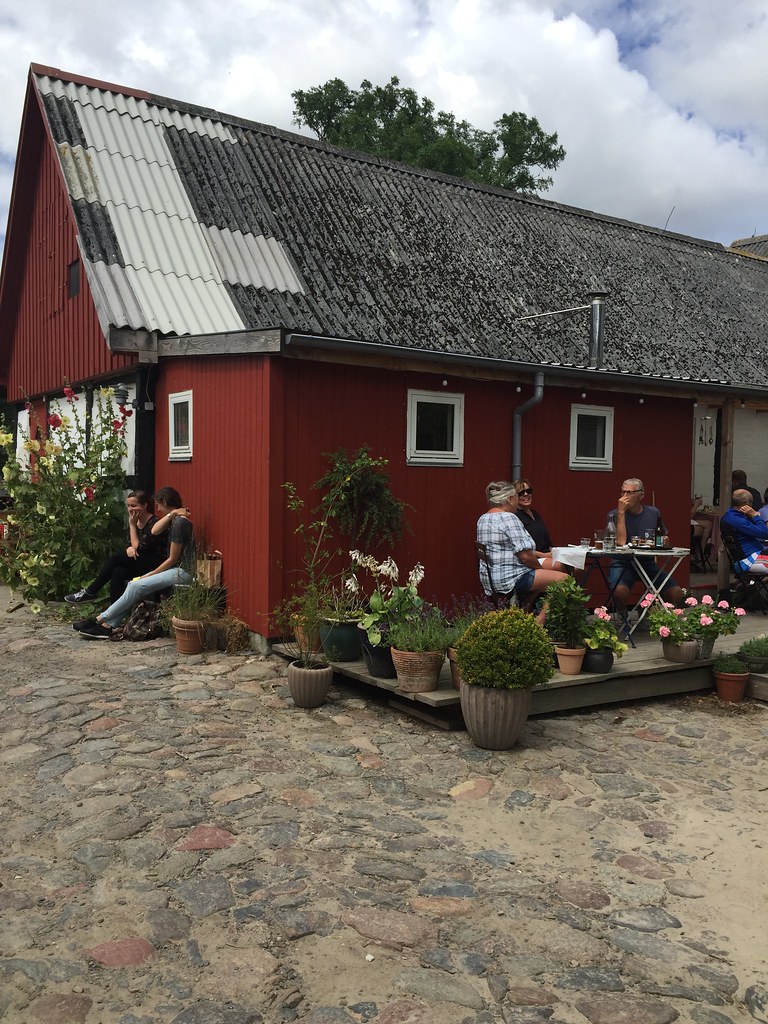 And it is a very popular place! There was a queue at both the deli counter and to order lunch. When I ordered a hotdog and a beer the cashier's eyes got wide and she asked where I was from. When I told her the United States she exclaimed "WOW! That is far!" Everyone in Denmark speaks English but my accent was obviously not heard much around here. 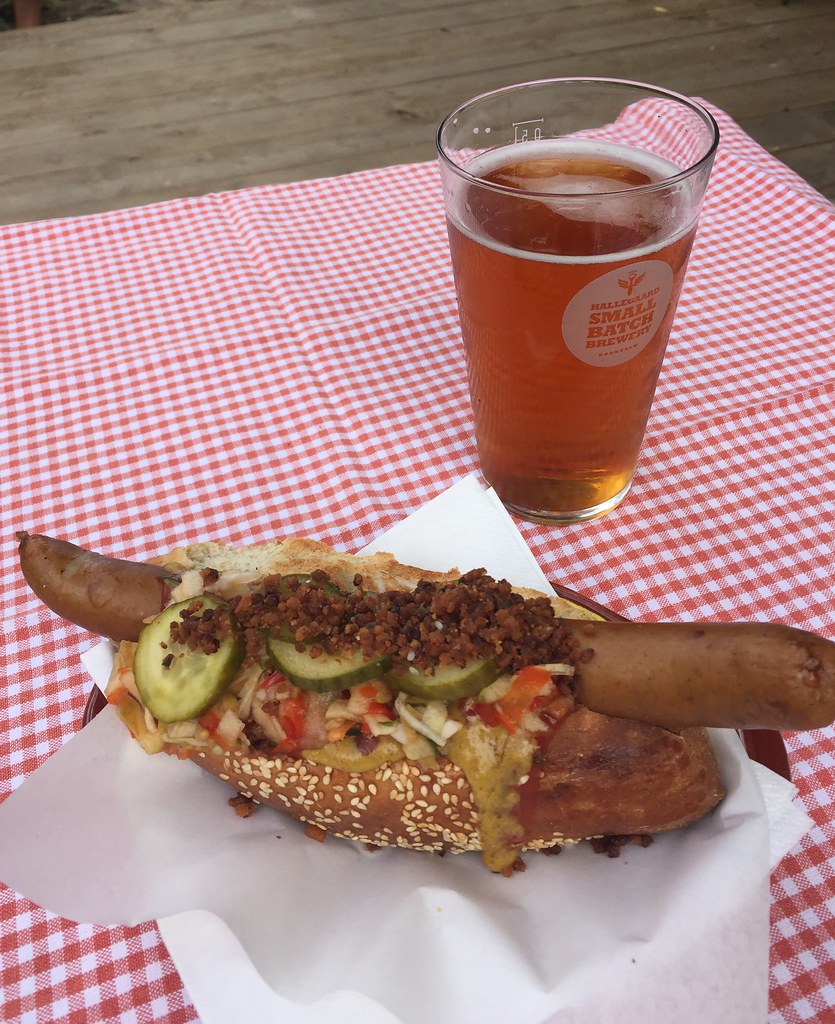 Next up, beach time. Dueodde is the place to go. There's plenty of free parking, a board walk out to the beach, and super fine white sand. This reminded me of Cape Cod a bit; sand dunes and beach grass. Bornholm's sand is so fine that it use to be used in glass timers; the island is also known for glass blowing. 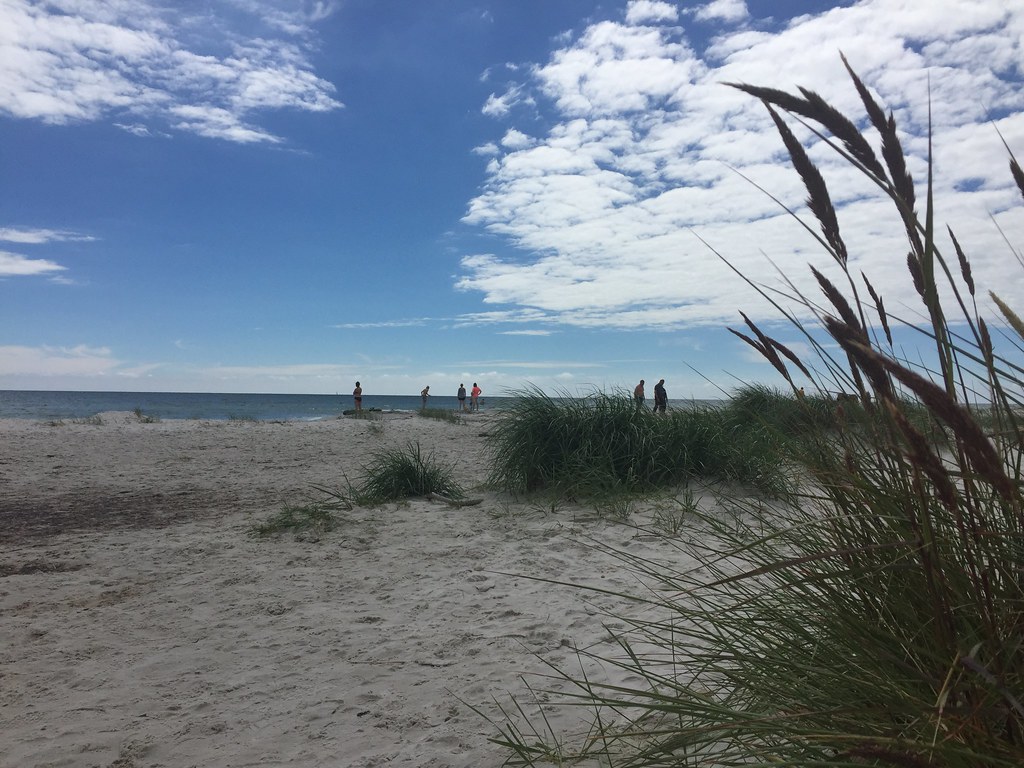 A few hours later I packed up and headed to Nylars, a small town which has one of Bornholm's round churches. I got lucky and arrived just as a tour was wrapping up so within minutes I had the church to myself. I wandered the small cemetery on the grounds and then made my way inside.

The upper two levels of the church were used as a fort when the town felt under attack. There was a narrow staircase leading up with a sign reading "enter at your own risk"; it did seem a little risky up there! 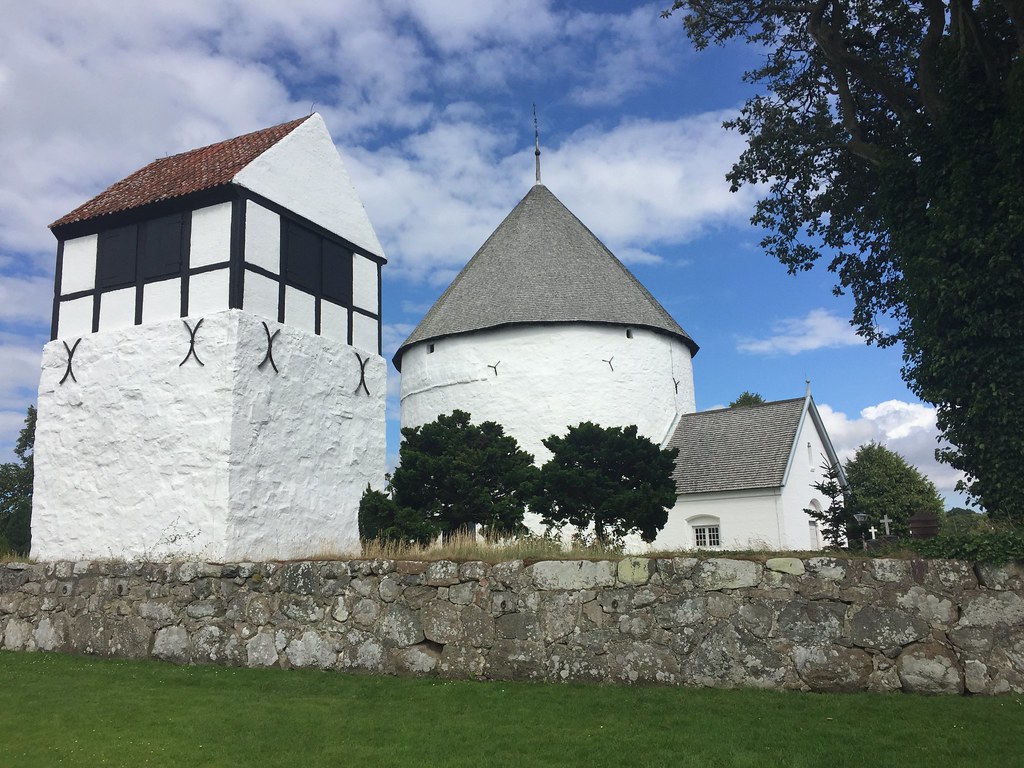 I headed back to my hotel and had a little happy hour wine out in the sun with my gorgeous view of the sea and relaxed before dinner (more on that here!) 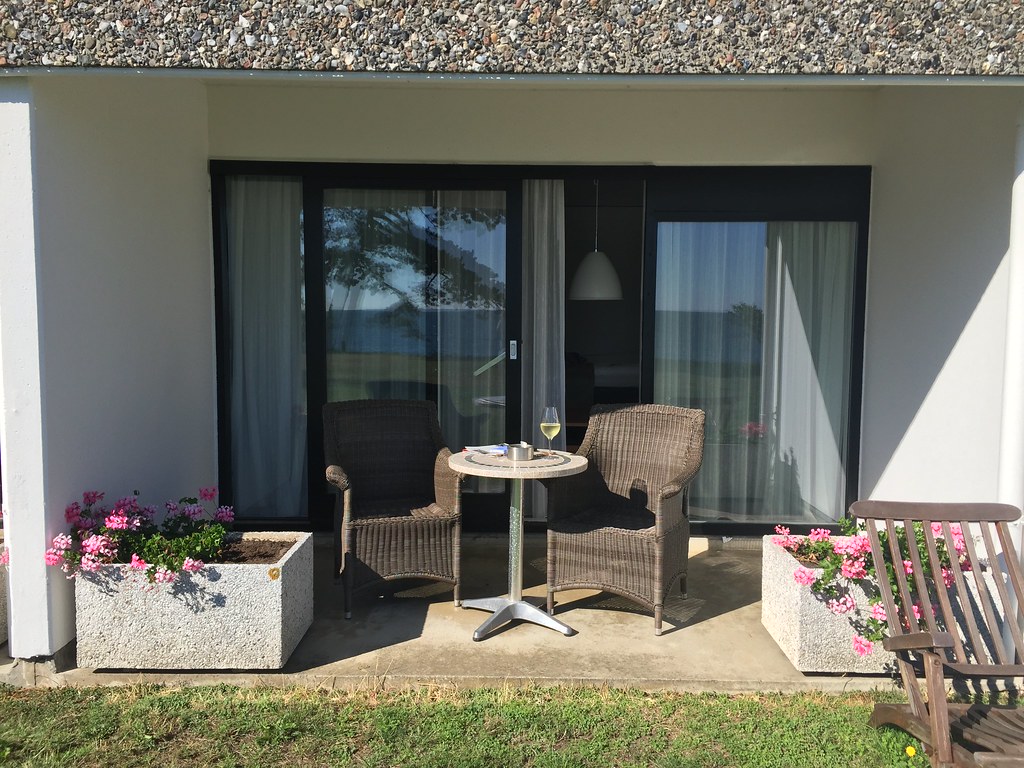 It was a month past summer solstice but that night I was still watching the sunlight disappear at 10:30, so cool!

The next morning I had breakfast at the hotel. In true Scandinavian style, it was a big spread with cold cuts, cheeses, breads, eggs, smoked fish, waffles, yogurts, etc. I was able to grab a table outside which was perfect.

I finished my coffee on my patio and then took another walk around the grounds and down to the dock. It was a beautiful, warm and sunny day! 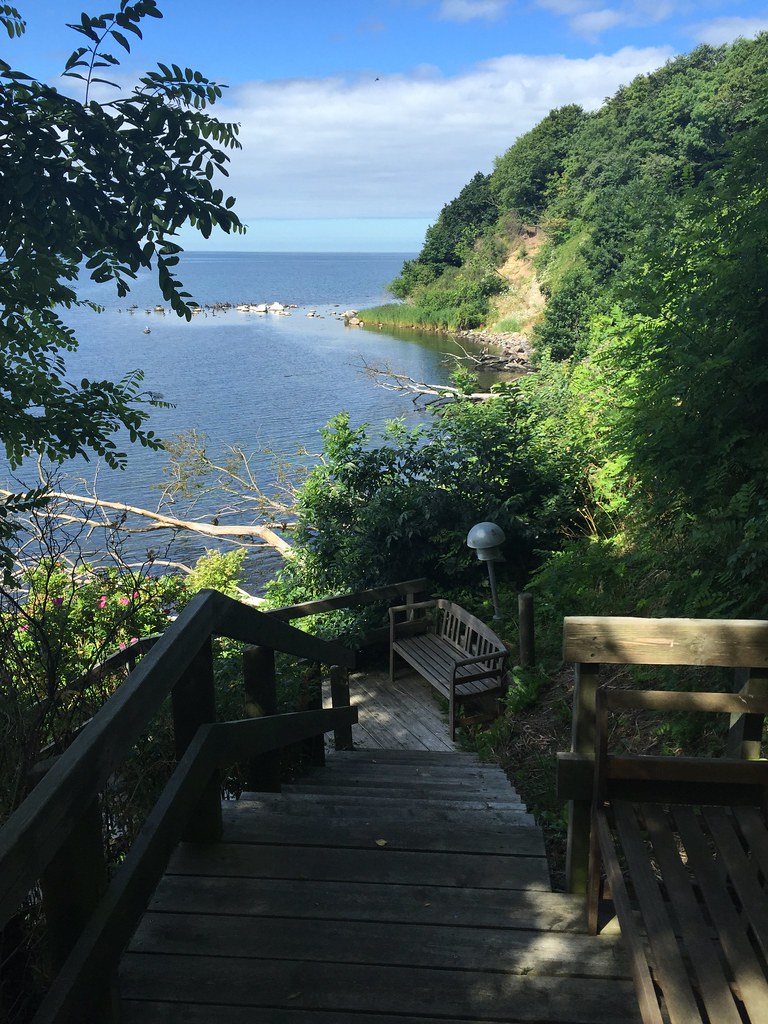 After I packed and checked out I drove across the island again, this time on a slightly different route to the town of Svaneke. I was driving thru the windy part of the island which was evident by all the windmills. Some were modern but many were older styles, meant for grinding not just producing energy. I drove thru corn and wheat fields, many with ocean views. And as I drove, I passed numerous roadside honor stands outside the farms. There were selections of fruits, vegetables, flowers, and even crafts. Each stand had a till of sorts where you put in your money, many had plastic bags for you to transport your purchases. I think I've only run across these in Hawaii before, I find them charming! 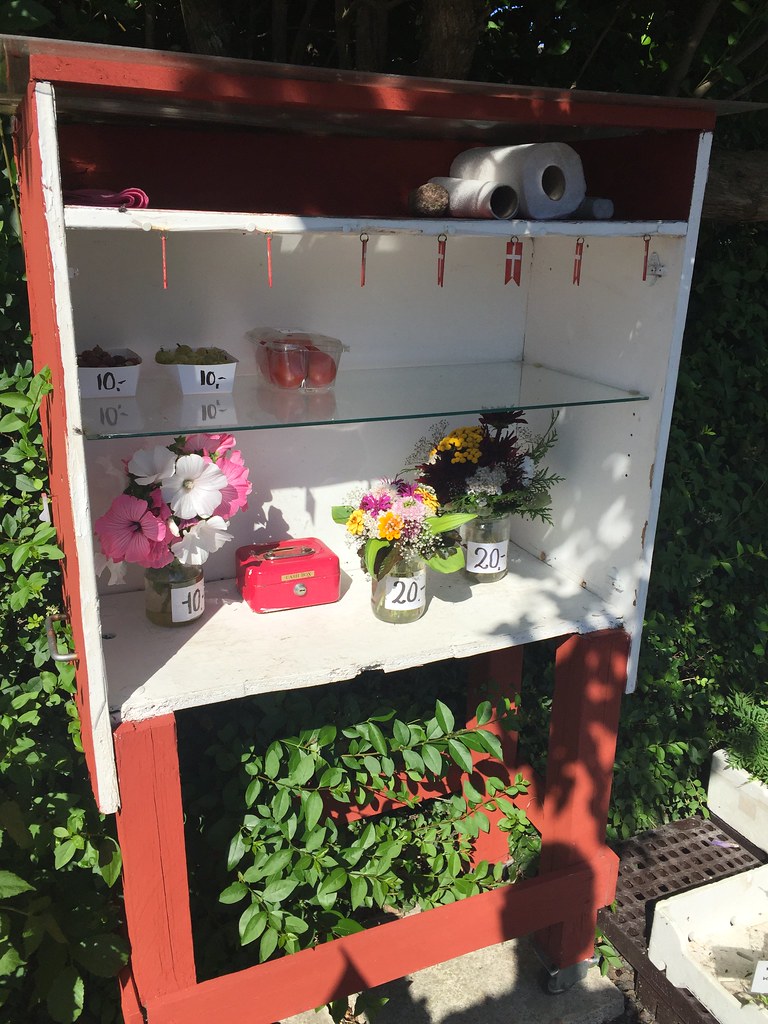 I pulled over to check out one of the old windmills and a woman who I hadn't spotted before came up and asked if I needed help. When I replied that I just wanted to see the windmill she told me it was hers, her great great grandfather had built it in the late 1800s. She seemed very amused that I would stop to take a photo of it. I felt a bit embarrassed that I hadn't realized it was in her front yard! 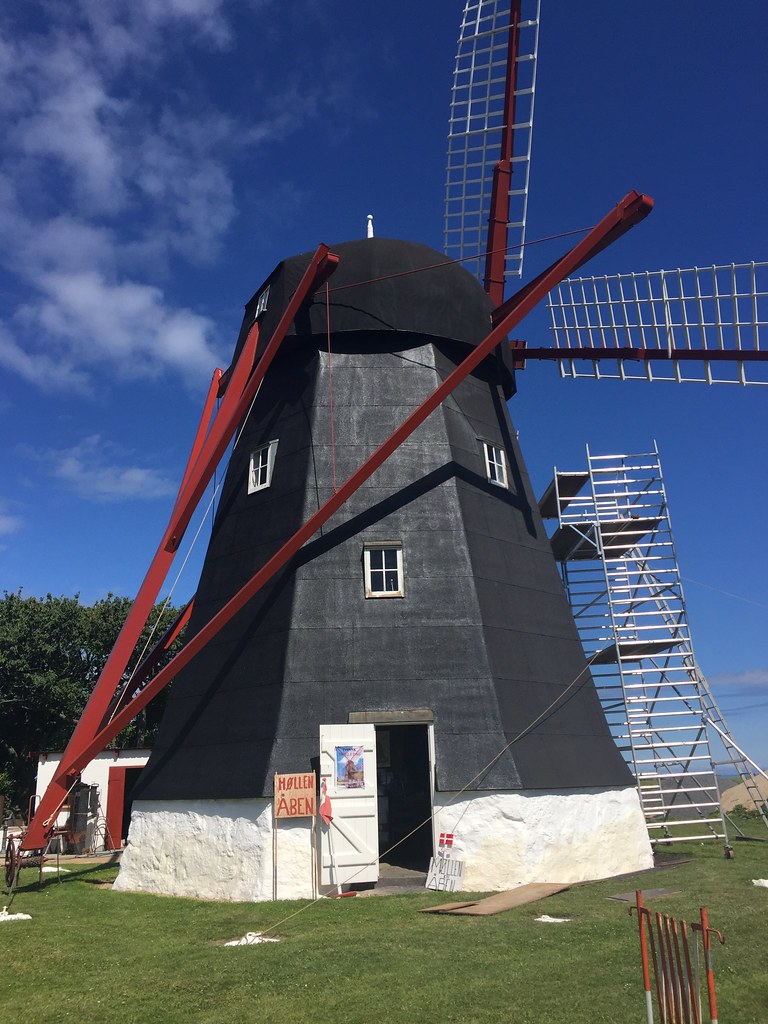 Once I got to Svanke I parked my car and wandered around; this harbor town is very small and very cute. There was a market going on in the main square and there were lots of little shops open: blown glass, jewelry, clothing, etc. I passed numerous houses, most rented as summer cottages I learned, where friends and families were enjoying lunch in the gardens. Seriously this place has my heart. 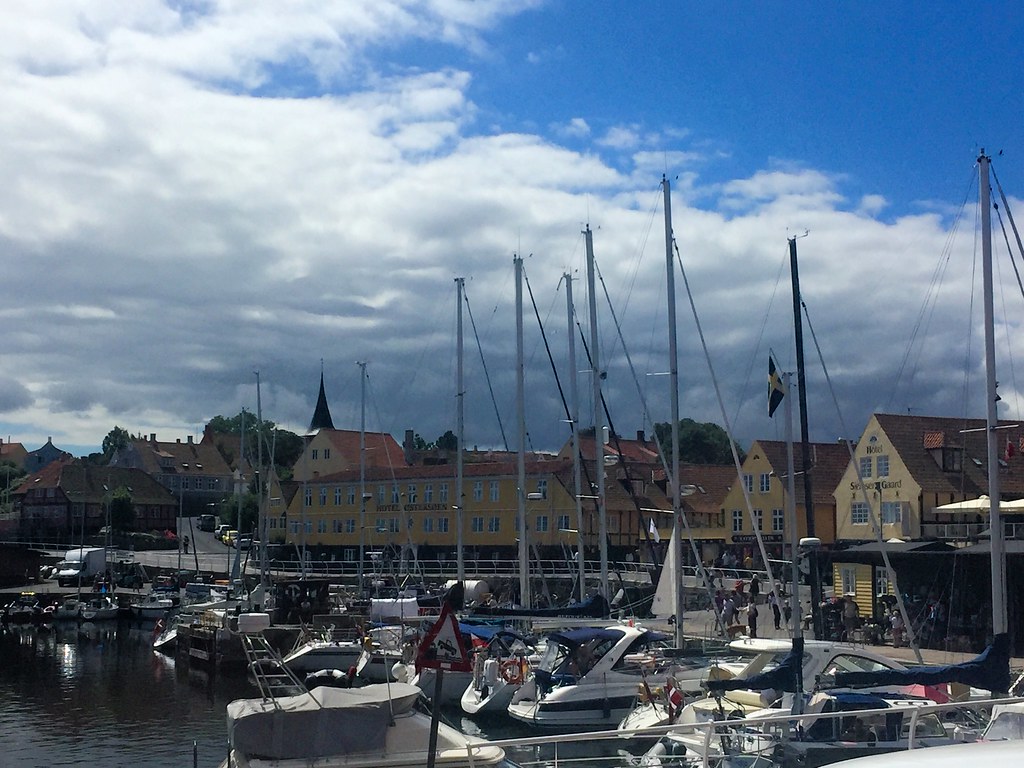 It was time for lunch and I made my way to the best-known smokehouse on the island; Røgeriet. There are huge piles of split wood in the front yard as well as numerous picnic tables. Inside the massive restaurant are more tables, resembling a beer hall. The back wall is lined with oven doors, inside whole fish are smoked to perfection. 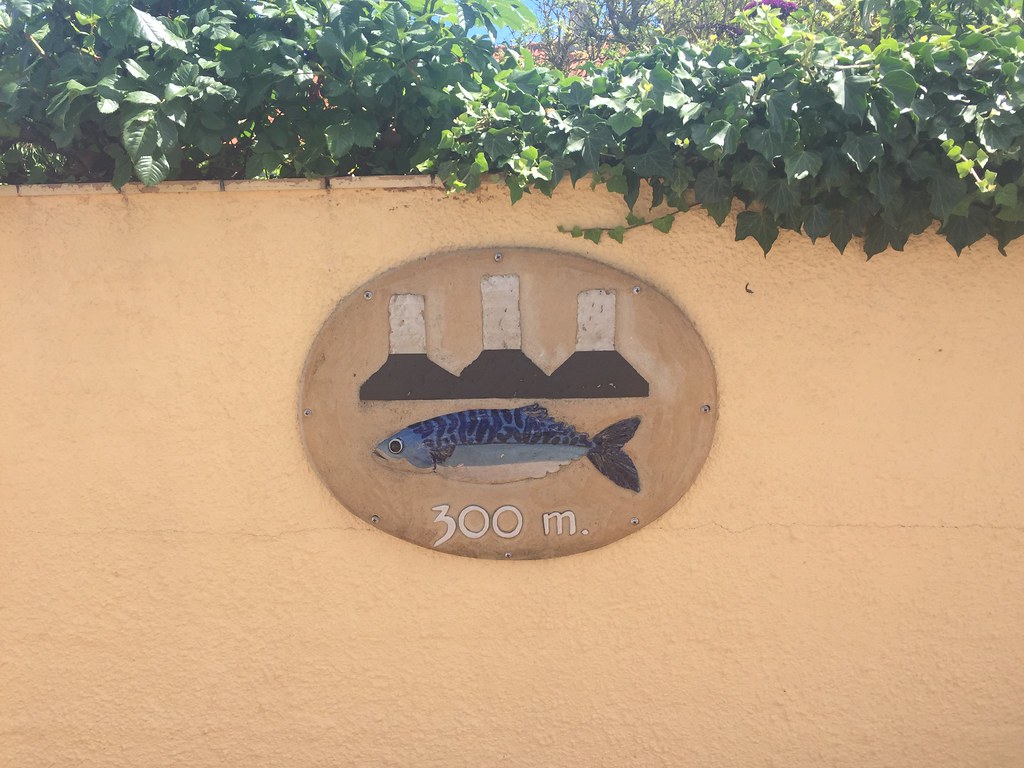 I queued up and decided on a smoked mackerel fillet, a side of creamy potato salad, and a local beer. I was probably the only person who didn't order an airplane size bottle of Gammel Dansk, a Danish bitter that people drink pretty much any time of day. For those who ordered the whole fish there were posted instructions on how to go about it. I watched the expert locals dissect their whole fish, getting every flake of fish off the bone and skin like surgeons.

I asked two women at one of the outdoor tables if I could share. Within minutes of me sitting down came to the usual question, "where are you from?" This time after I answered one of the women told me that she was born on the island, had left as an adult to live on the mainland but had just returned recently now in her 60s because she missed it so much. I could understand. 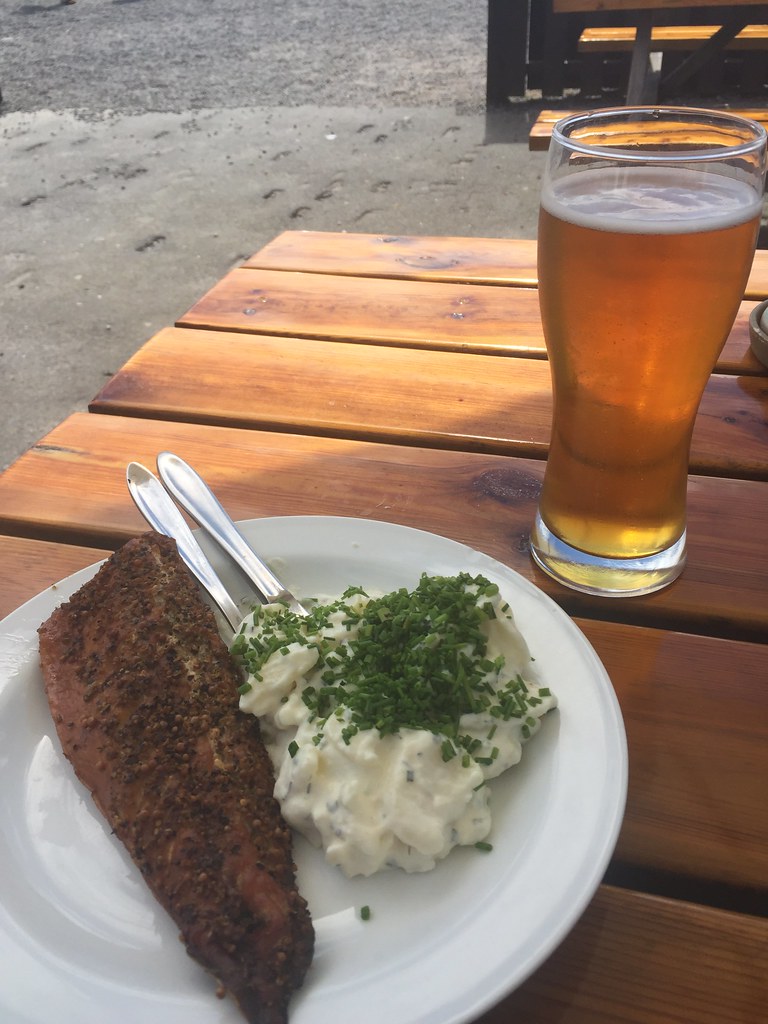 I walked back through town, spotting an outpost of the Hallegaard deli near the harbor. I also found a glassblowing studio and watched them work for a bit. Licorice is a Scandinavian obsession and salt is the most popular flavor; I'm also a convert. There is an outpost of the local licorice "celebrity" maker in town: Lakrids by Johan Bülow. I went in and tasted some incredible flavors. I had seen their shop in CPH airport and I now knew what I would be buying before my flight home.

The sun was still shining so I decided to head back to beach at Dueodde for a bit. 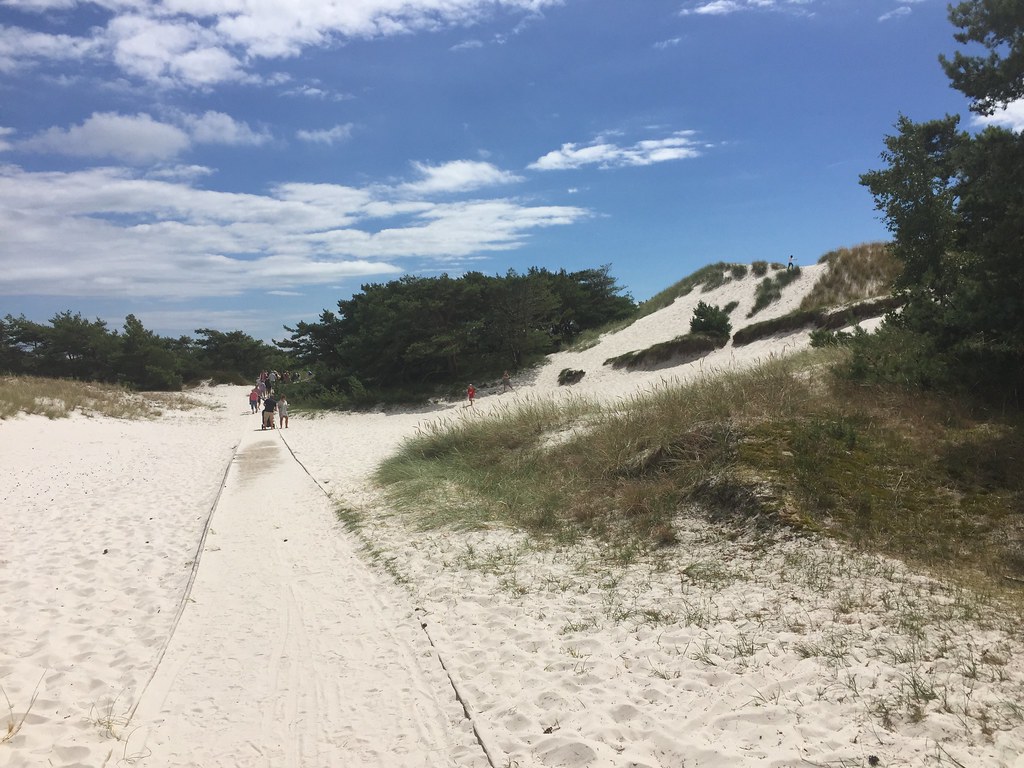 After an hour or so the clouds started rolling in and it was time to start making my way to the airport. On my drive I spotted another farm, this one with goats and a café. I stopped for a glass of wine and watched the goats roam with the scent of the ocean in the distance. 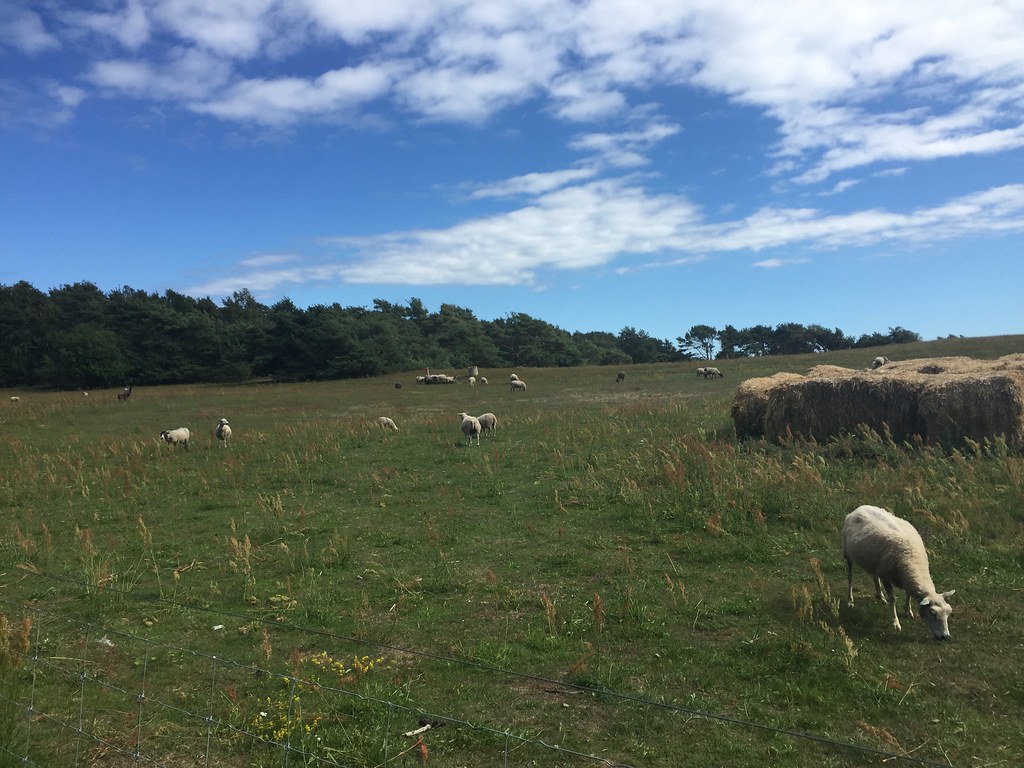 Right before the airport I passed another roadside honor stand and swung in to take a look. As I was grabbing a picture an old man came out carrying a bouquet of onions to add to the offerings. I asked him if he spoke English and when he replied yes, I asked him if he had regular customers that came daily or so, to which he said "of course!", and then he asked me where I was from... 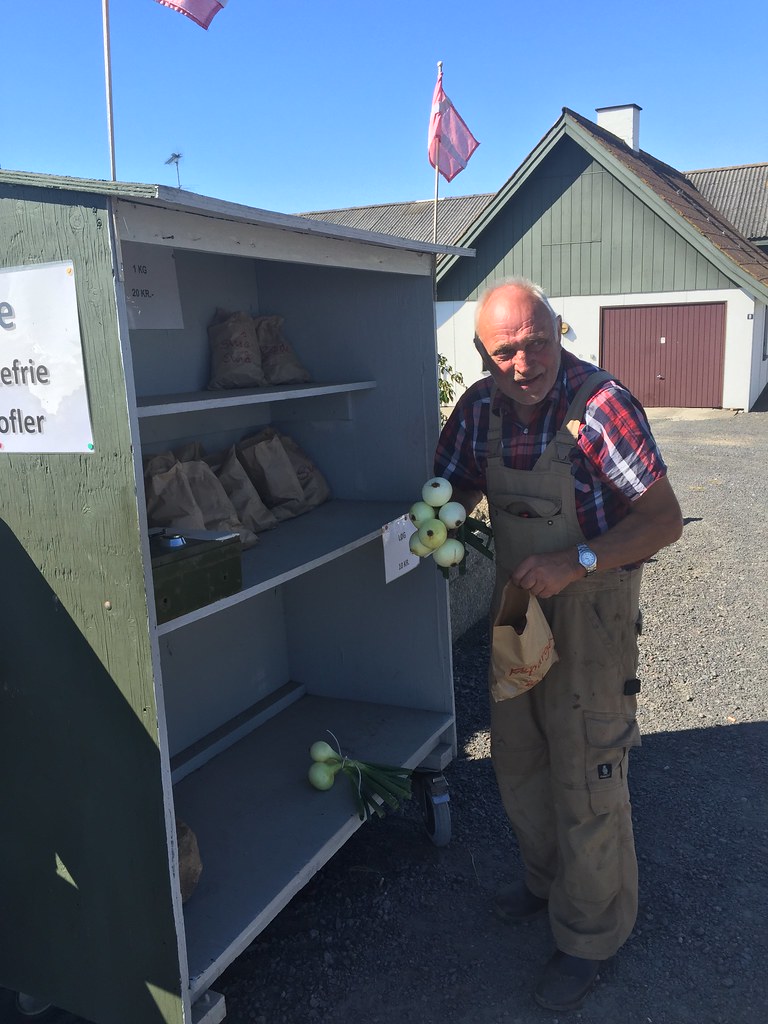 I parked my car and checked in at the airport; an hour before my flight and it was practically deserted. I walked out onto the tarmac, boarded my plane, and as we took off over the Baltic Sea I promised I'd be back. 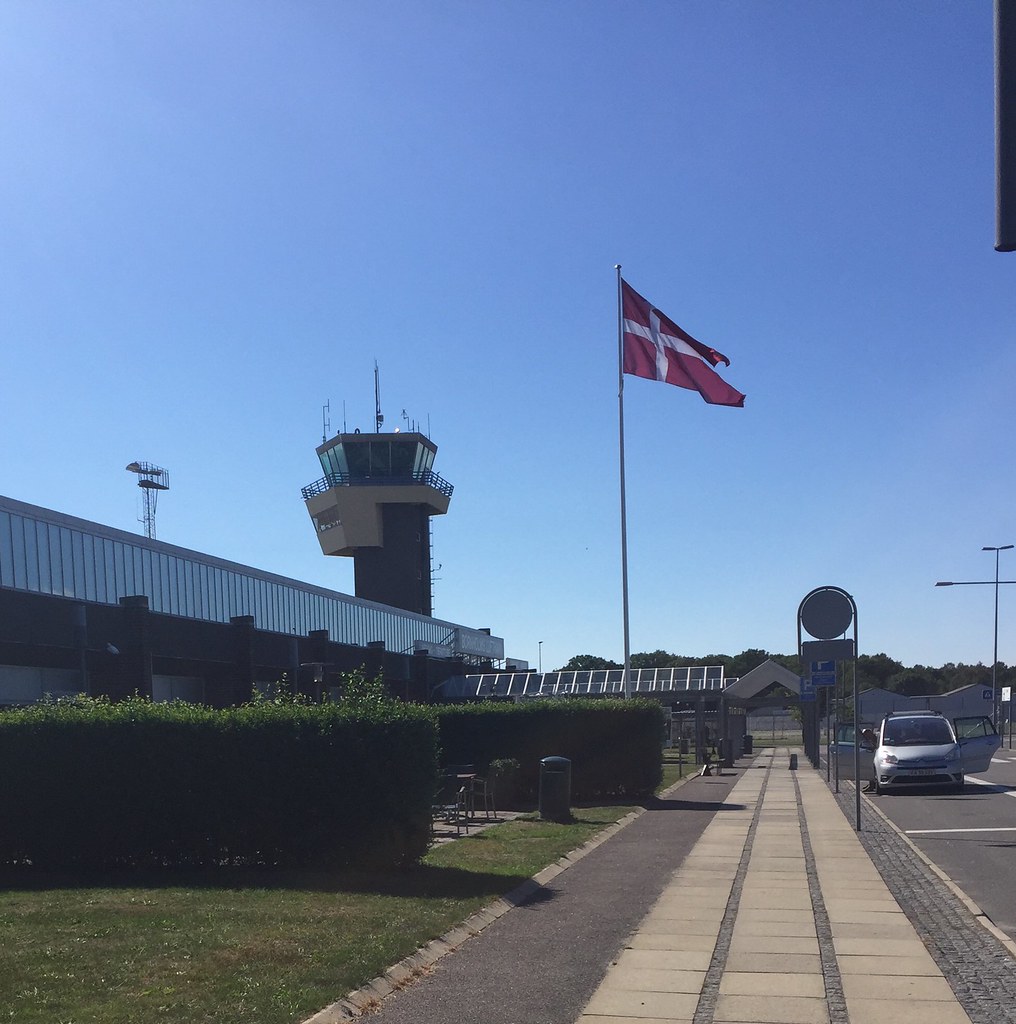 All Bornholm photos here.
Other posts from this trip:
Danish Days
Hygge Time!
Last Days in Copenhagen
Dinner in the Middle of the Baltic Sea
Best Restaurant in the World?