More Than One Night in Bangkok


Now that I've got that song stuck in your head...

It takes a long time to get to Thailand, no one really talks about that. I left on noon on Christmas day last year and landed midnight on Dec 26th. In fact by the time I got to the hotel ( I hired a car from the hotel to pick me up for $50) it was just after 1am on the 27th. That damn dateline!

Everyone suggested that I get in and out of Bangkok relatively quickly during my Thailand vacation, but I ended up being disappointed that I was only there two days in the beginning and two days at the end. If you love big cities I'd suggest planning a few more days if you can. There is so much to see and do there! 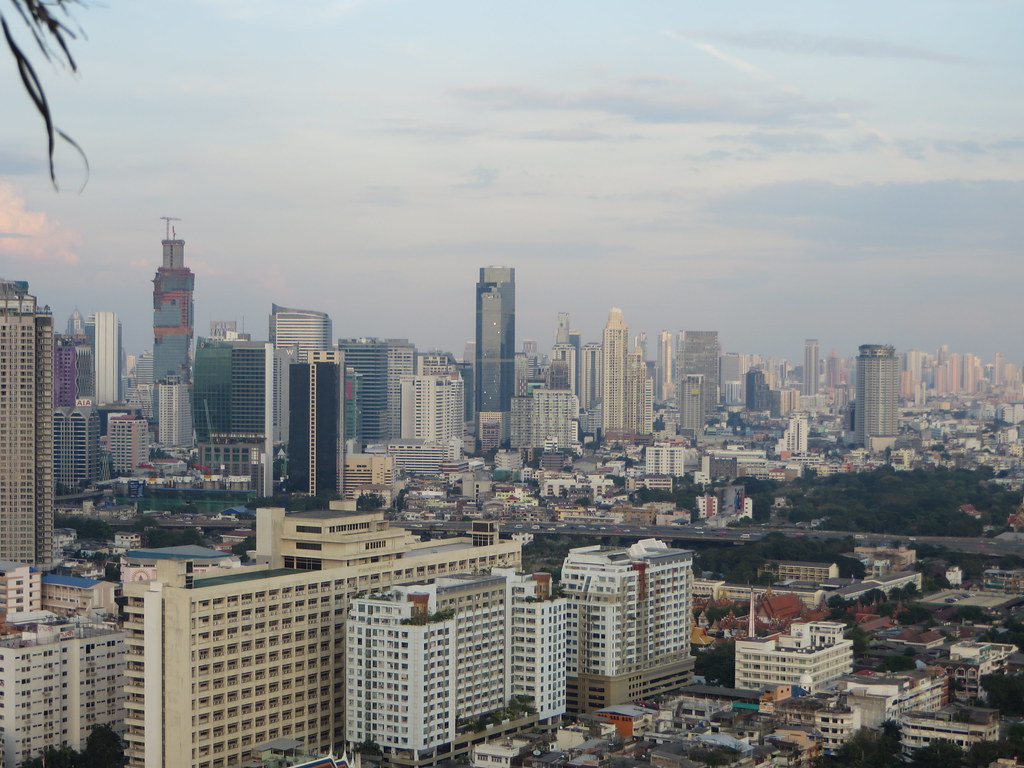 For this first leg, I stayed at the Chatrium Hotel Riverside, where they upgraded me to an executive suite because I asked nicely. The room was huge with a separate kitchen, living room, balcony, and had amazing views of the city. When the smog wasn't hiding it. The hotel is at the southwest end of the river, you have to take their boat one stop to the main express river boat stop, but it was easy and free so no problem.

Thank god for 24 hour room service, cold beer, and comfy pillows. When I woke later that morning I headed down to the pool to relax, unwind, and soak up some sun and river views. 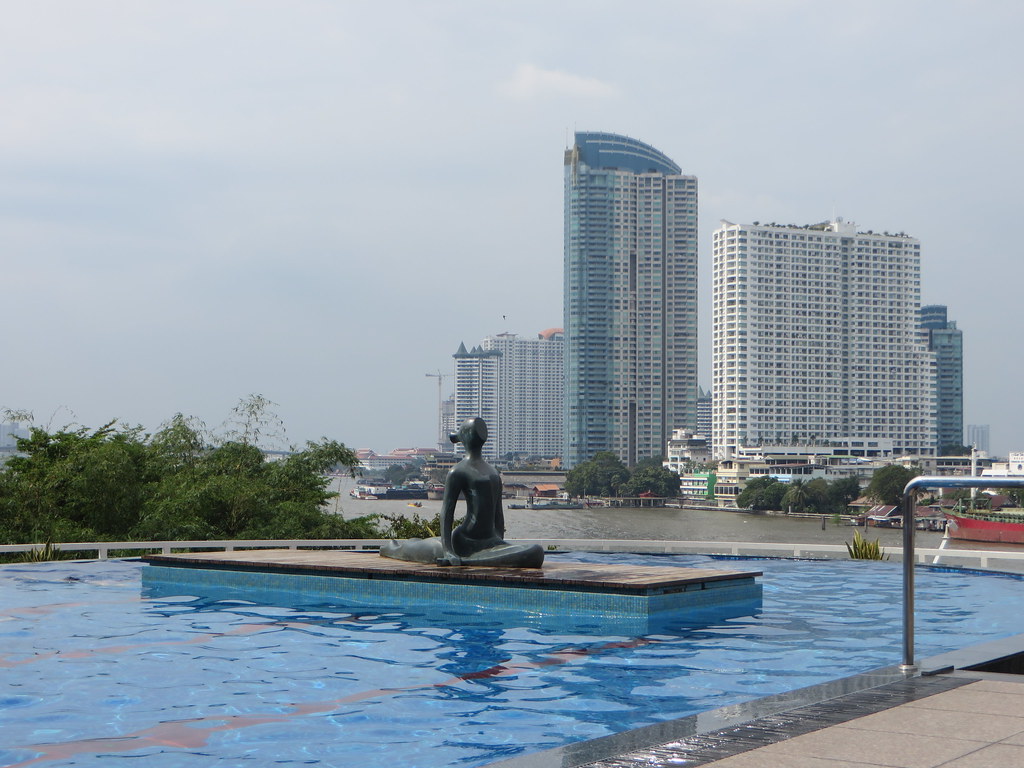 When I got hungry I walked down Chan Road and picked a random noodle stand/stall which was busy with locals. I literally had no idea what the woman was serving except there was broth and there were noodles. As I stood there pointing she thought maybe I wanted it to go and started to fill a plastic bag. I waved that off and then she tried to find out which color bowl I wanted; did it matter? They looked the same except for one was blue and one was pink. I shrugged and pointed at her and smiled. Then she added noodles and again tried to find out which choices of additions I wanted. I recognized the fried pork skin and then just randomly pointed at some other things, reading her face for approval as I went. She ladled on the broth and another woman took my bowl and led me to a plastic table. Seeing that all the locals were drinking a mysterious beverage from communal Tupperware pitchers I asked for a dietCoke. Then I dug in to my first delicious bowl of noodles in Thailand. I had done it! I had ordered lunch! I had no idea exactly what I was eating but it was good and the locals were watching me slurp and they were nodding and smiling. 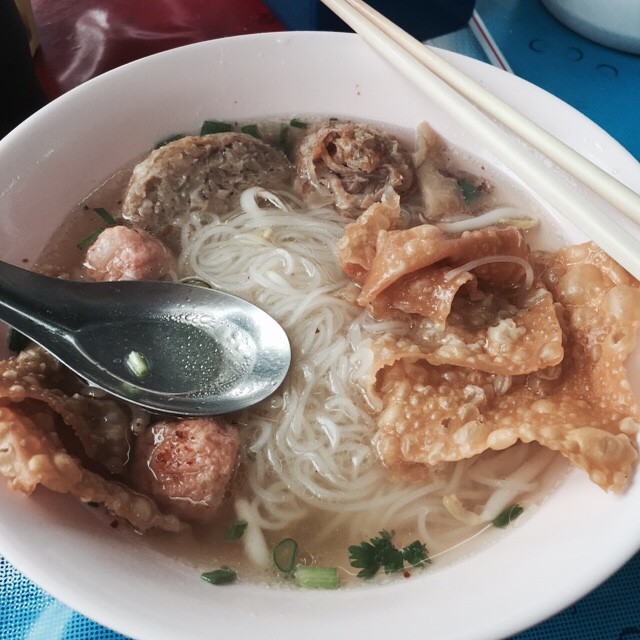 When I was done I made the international sign for "check please" and stared blankly at the man who told me the price in Thai. I held out my smallest Baht currency, a 1000 Baht bill which is about $25. The man looked at me, I made the "I'm sorry" face and he left to cross the street where he entered a flower shop. Shortly after he returned with my change, which I then figured out my entire lunch had cost the equivalent of $1.50. Note: change to small Baht!!

Dayne arrived later that day and in the evening we took the express boat to the flower market, Pak Khlong Talat. It was absolute mayhem! Food stands everywhere selling things that we couldn't always figure out; a maze of flower stalls with amazing arrangements; smells of exotic blooms mixed with gasoline, food, and people; and more marigold leis, called phuang malai, than you can imagine. Everyone buys these daily as symbols of luck and a form of protection, so they are the biggest seller at the market. Add to all this a dizzying number of motorcycles, scooters, cars, and tuk tuks driving wildly. Lanes? Who needs them! 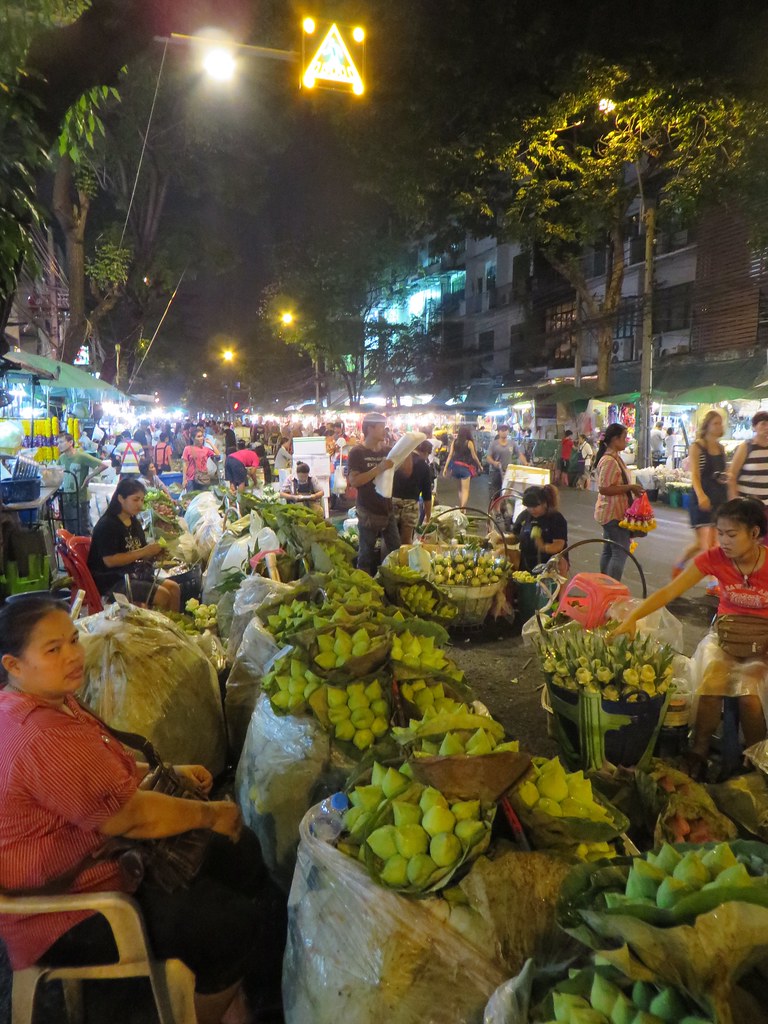 I loved it! I have never seen anything like it! The market is pretty much open 24 hours a day, I hear it is busiest pre-dawn so if you are up around that time in Bangkok go take a look!

We grabbed a tuk tuk and after a lot of misunderstandings found the Amarosa Bar which sits on the rooftop of the Arun Residence. There is nothing special about the bar itself, certainly not the drinks or the service. I was there for this absolutely outstanding view of the Wat Arun. 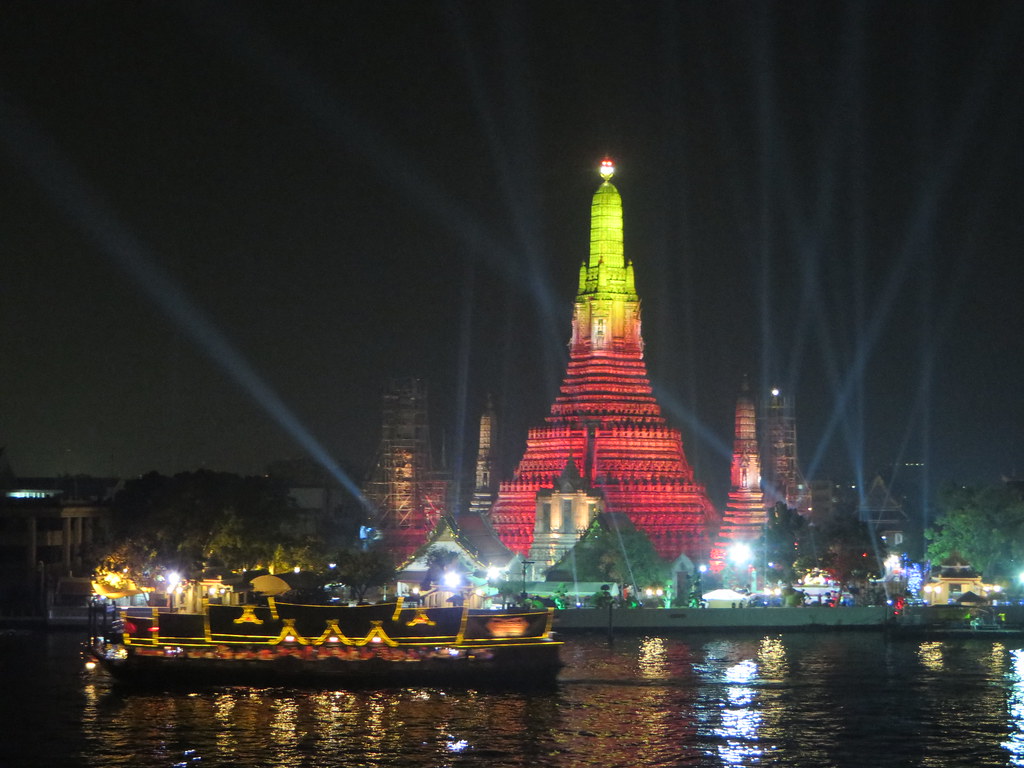 Drinks drunk, we grabbed a taxi, negotiated an off meter price of 250 Baht (about $7) and headed across town to Soul Food Mahanakorn. This place serves contemporary Thai food (like this crispy fried morning glory & squid salad) and fantastic cocktails. It's definitely more spendy than what you get on the street but we both thought it was really, really good. 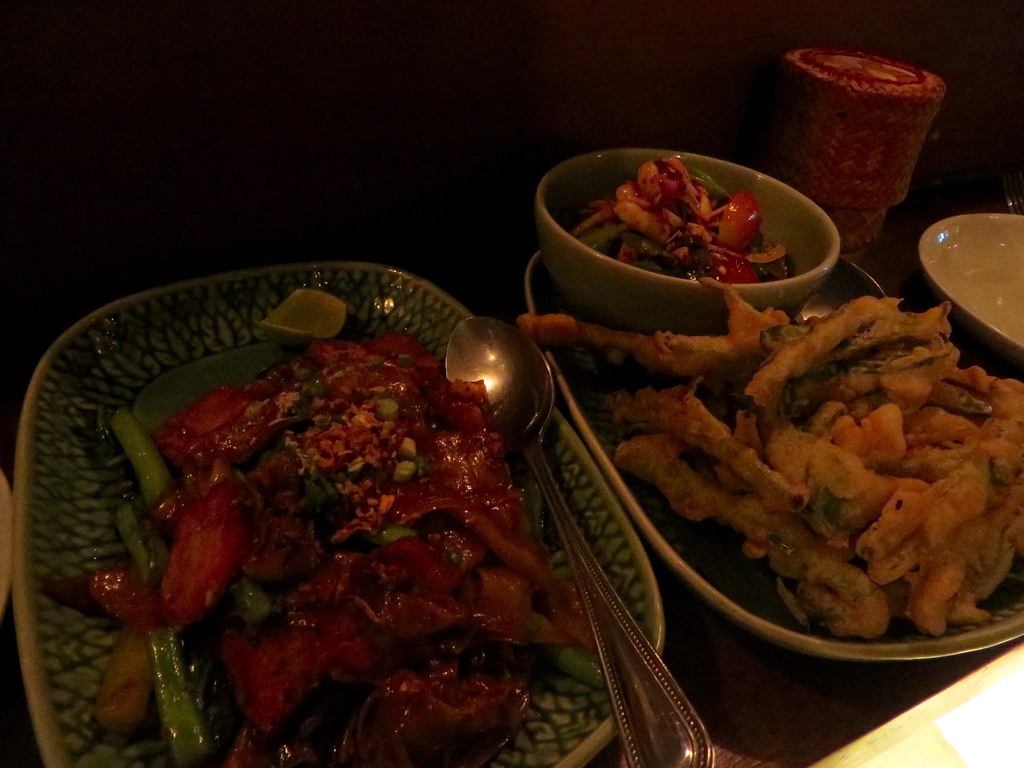 The next morning we had planned to visit the floating market but for reasons I still don't know it was closed. We hired a longtail boat for a shared 2 hour tour of the canals for 2000 Baht (about $55) from our hotel pier. Our first stop was the Wat Arun where we could go off on our own to explore the grounds and climb the outside of the temple. I hadn't planned for a temple visit that day so I had to buy a sarong to wrap around my shorts and rent a scarf to put over my bare shoulders. Coupled with the broken china tiling of the temple there were a lot of patterns happening! 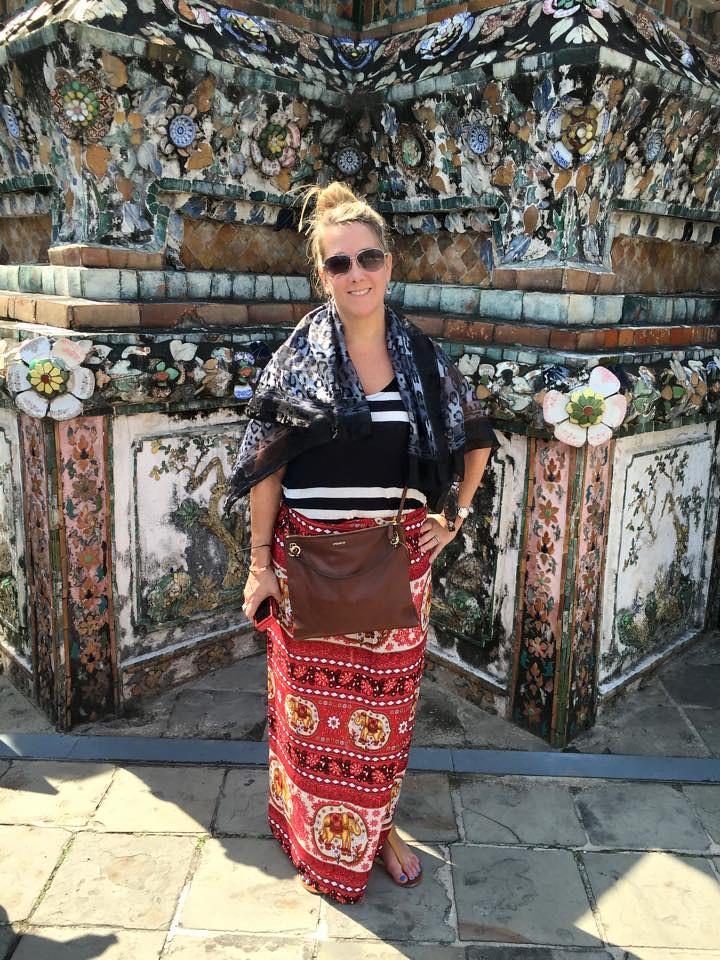 The canal tour was cool as we got to see lots of little "neighborhoods", scores of smaller temples, floating houses, water moniters, and even went through the locks. 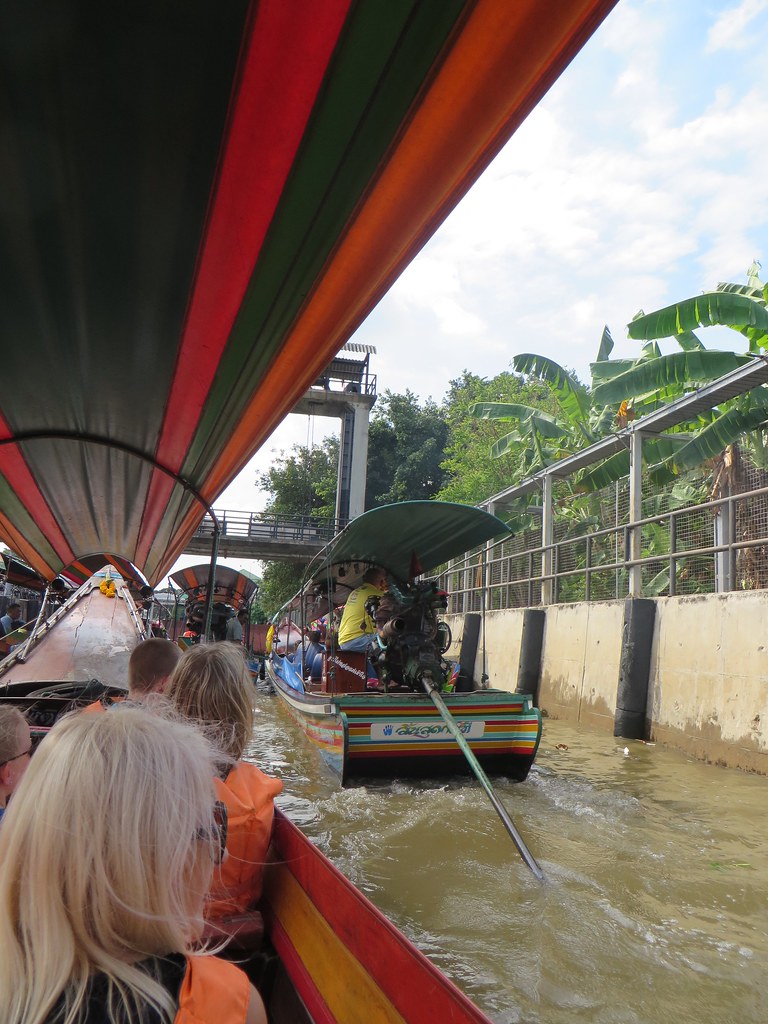 We were hungry when we were dropped off at our hotel pier so we jumped in a cab and headed to Soi Covent, which is a street littered with all kinds of food carts, for lunch. We had an absolutely delicious meal of fried fish, spicy green papaya salad, and rice while sitting on tiny plastic stools on a side street. 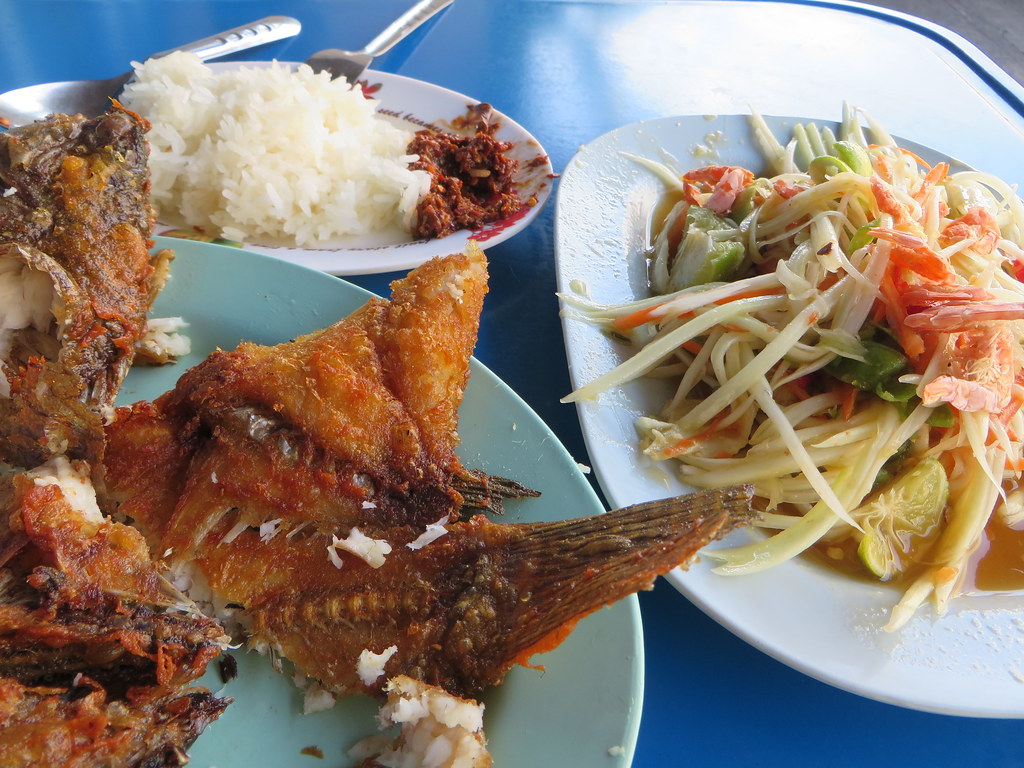 After exploring more food stalls, we grabbed another taxi down to the river and took the express boat to the Amulet Market. The streets here are lined with vendors selling everything from cheap touristy amulets to very rare and expensive ones. Each Buddha brings a different kind of luck; romance, wealth, health, etc. Men perch with magnifying glasses to search out the authentic and antique, and haggle over prices. 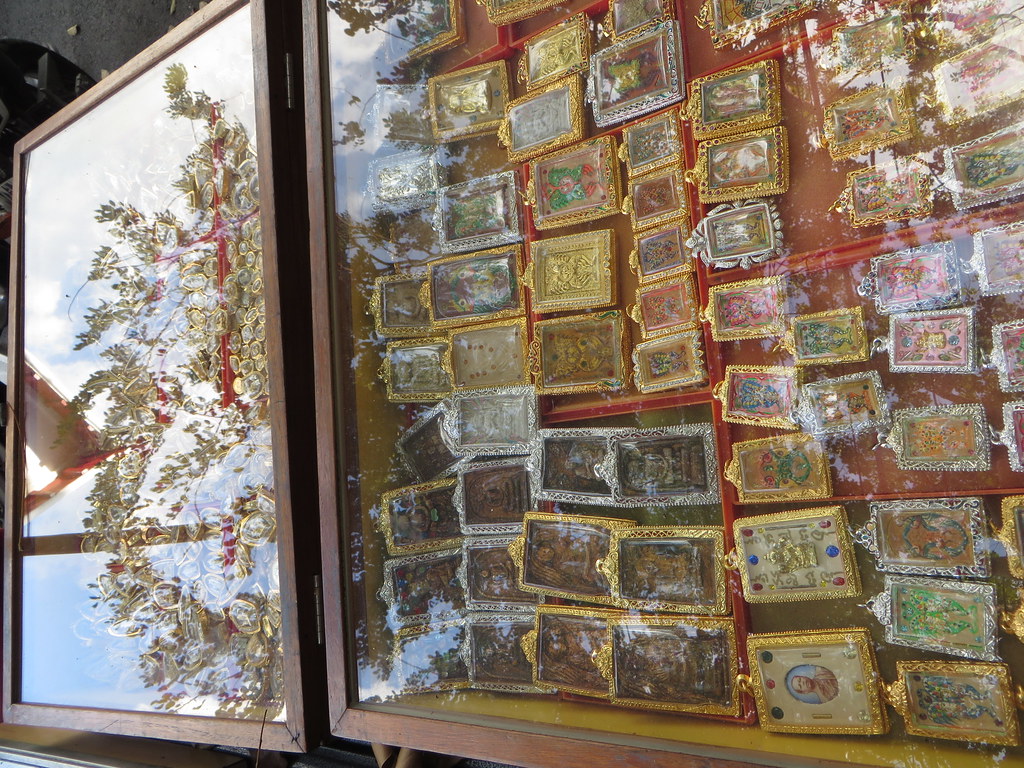 There is a large food market at the express boat ramp so we explored that before heading back to the hotel via the river. We'd have to wait a little more than a week to see more of Bangkok, for now we had just enough time to catch sunset and a cocktail before heading to the airport to meet Forest and Thibault for our flight to Phuket. 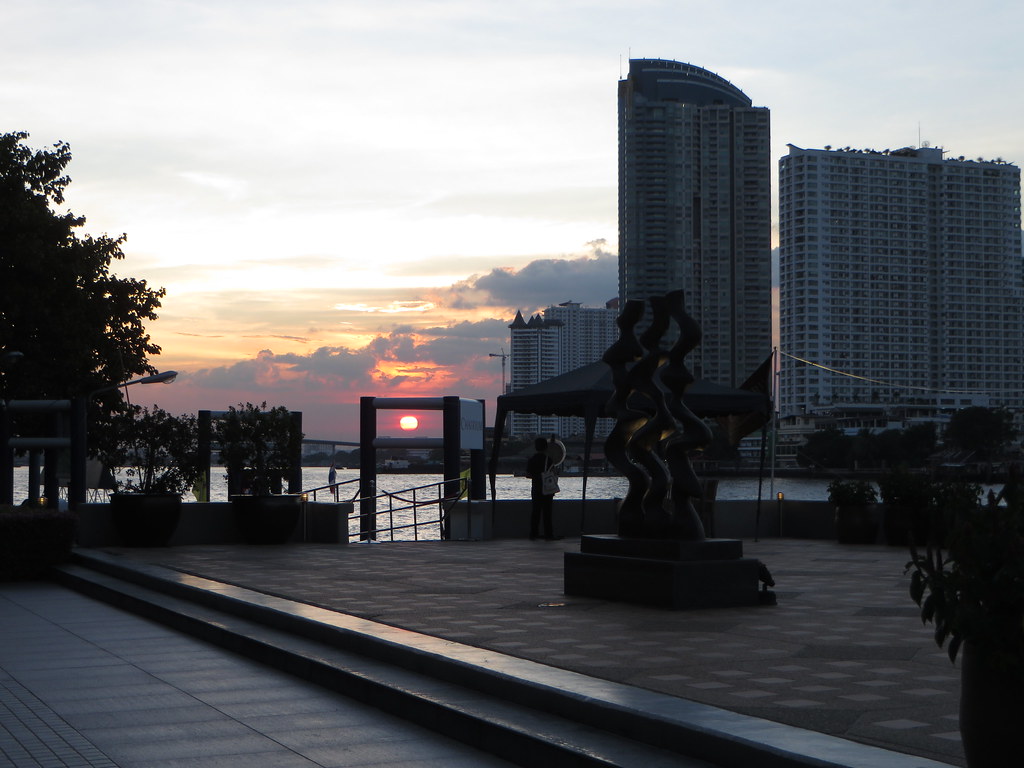